What to do in Amsterdam in 3 days: A complete travel guide 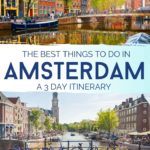 I used to think Amsterdam was one of those places you could zip through on a layover. You know, walk over some canals, swing by the Anne Frank House, brave a walk through the Red Light District and maybe even have enough time to grab a coffee before heading back to the airport. Boy was I wrong. 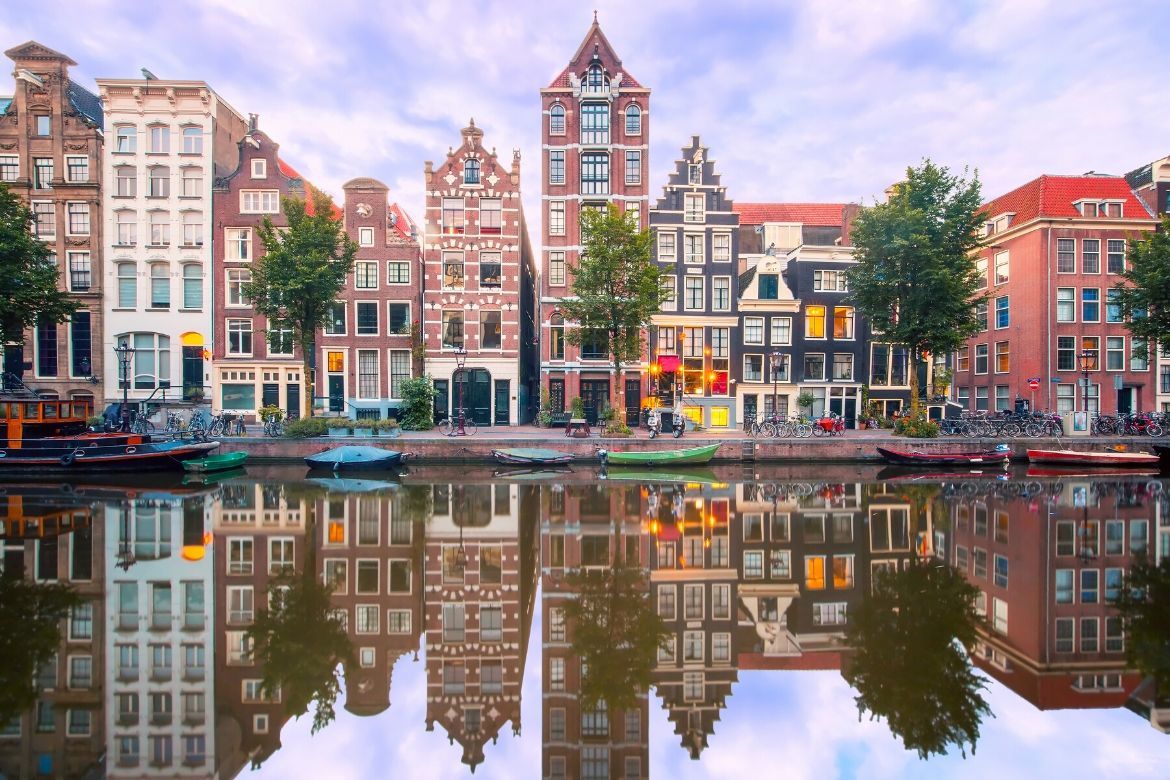 After spending three days in Amsterdam and still not feeling like I even scratched the surface, I strongly believe you shouldn’t even bother coming here if you have less than a few days. Why? Because similar to other world class cities like New York, Paris and Rome, there are an endless amount of attractions to tour, houseboats to ogle over, quaint side streets to get lost on and local specialities to savour—all while plotting exactly what you’d have to do to be so lucky to call this incredible place home someday.

From the best city tours to must-do sites, here’s a complete guide for what to do in Amsterdam in 3 days. 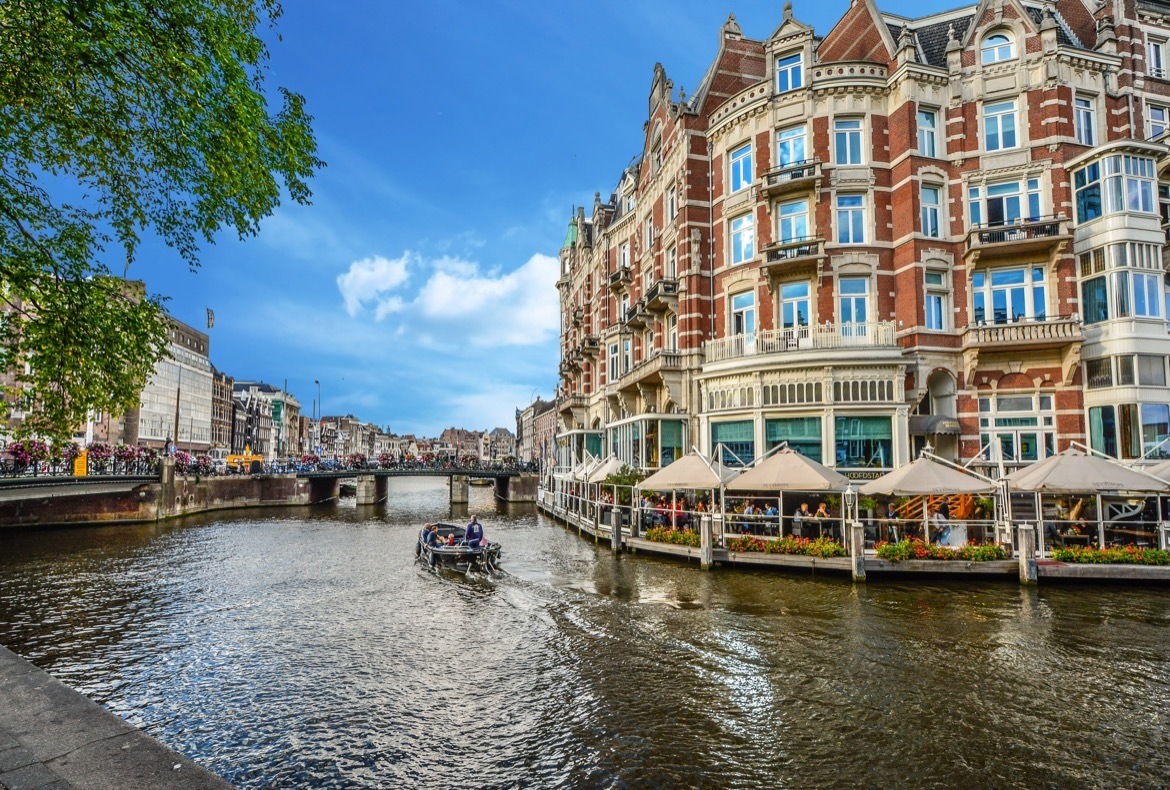 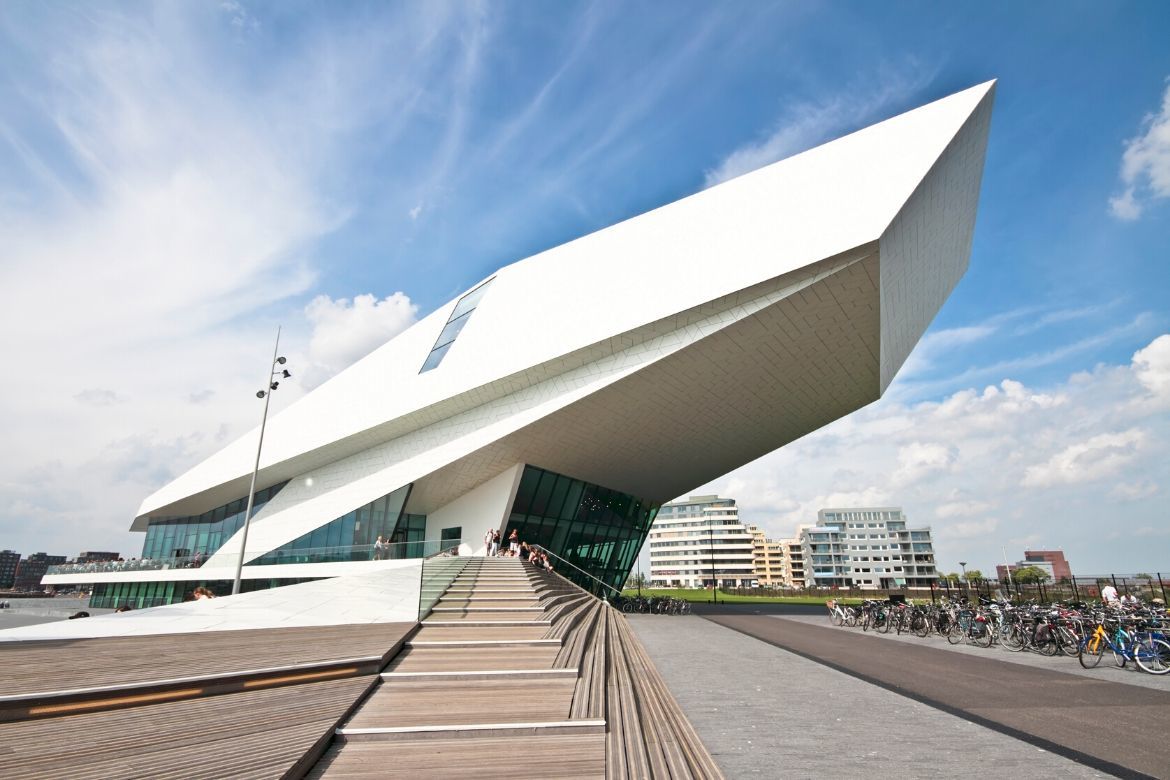 What to do in Amsterdam: Canal Tours

A canal tour is the perfect way to start off a trip to Amsterdam no matter what kind of budget you’re working with, as it gives visitors a great overview of the city so they know which areas they’ll want to go back to later. There are dozens of tours throughout the day, which typically last one hour and include an audio guide for about $15 per person. There are also special packages available that include extras like museum admission or dinner and drinks. Click to book 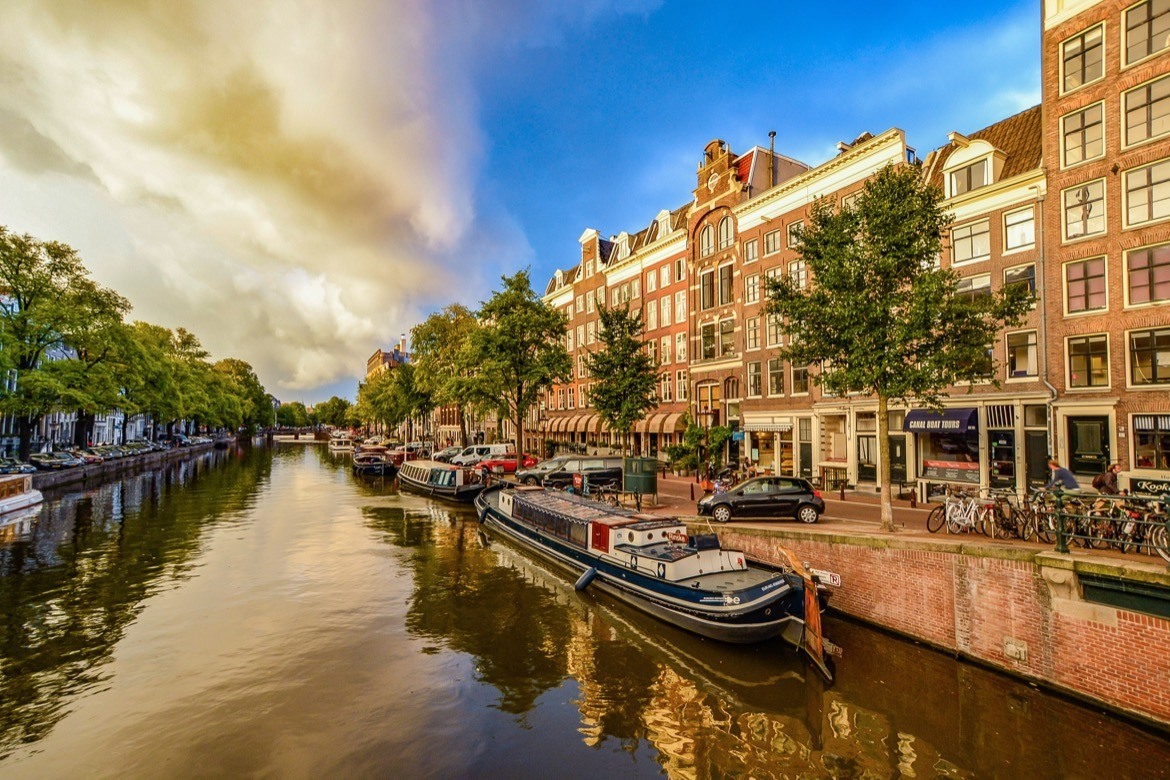 Be sure to pay special attention when the boat passes through the Prince’s and Gentleman’s canals—the surrounding houses are nothing less than impressive! 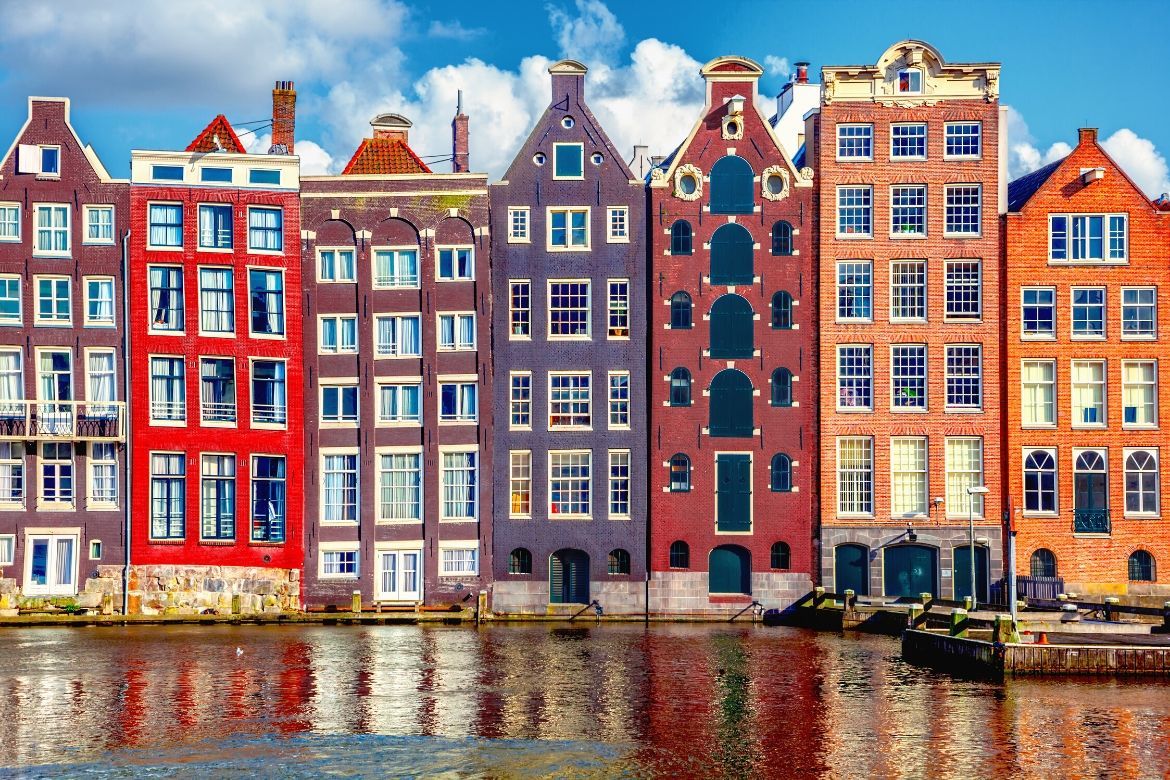 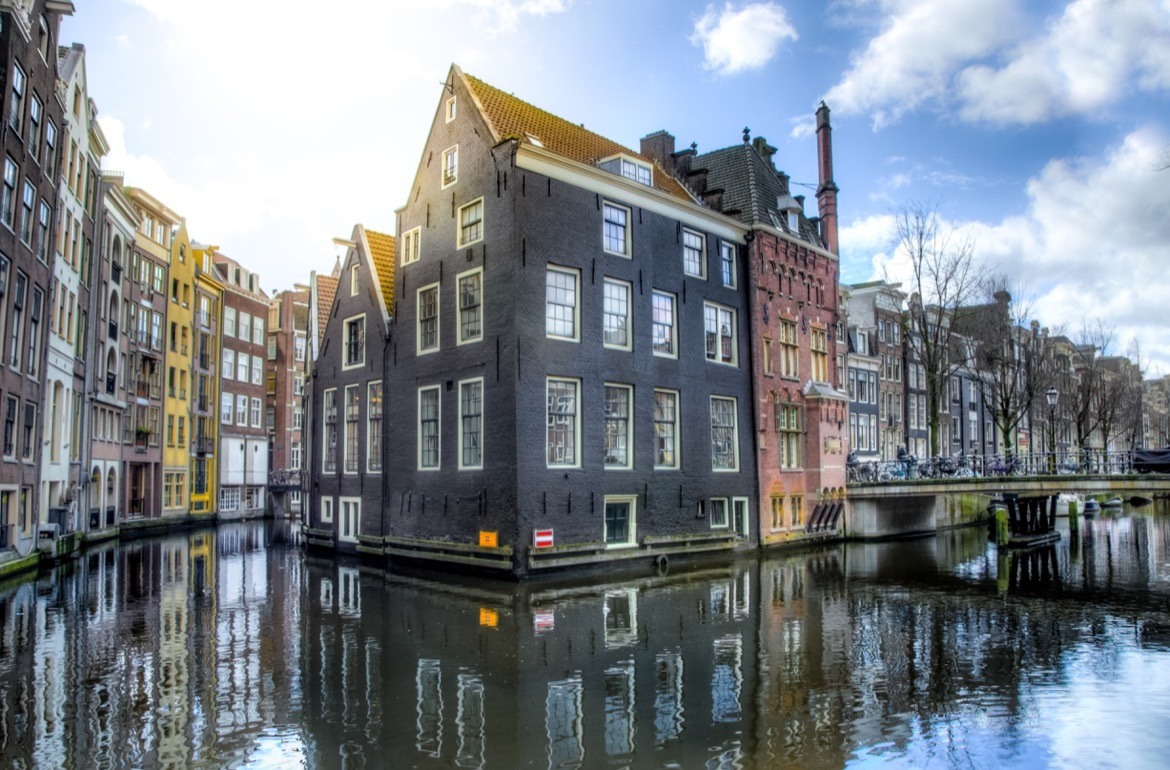 The famous I Amsterdam sign is what usually lures travellers to this area, but it’s well-worth sticking around to enjoy the gorgeous museums and laneways in the Museum District. Start by crossing the canal in front of the gargantuan Rijksmuseum, which houses exhibitions detailing Amsterdam’s long history, and stop to take photos from the beautiful bridge. Just be sure to watch out for the onslaught of cyclists, as it’s a popular crossing! 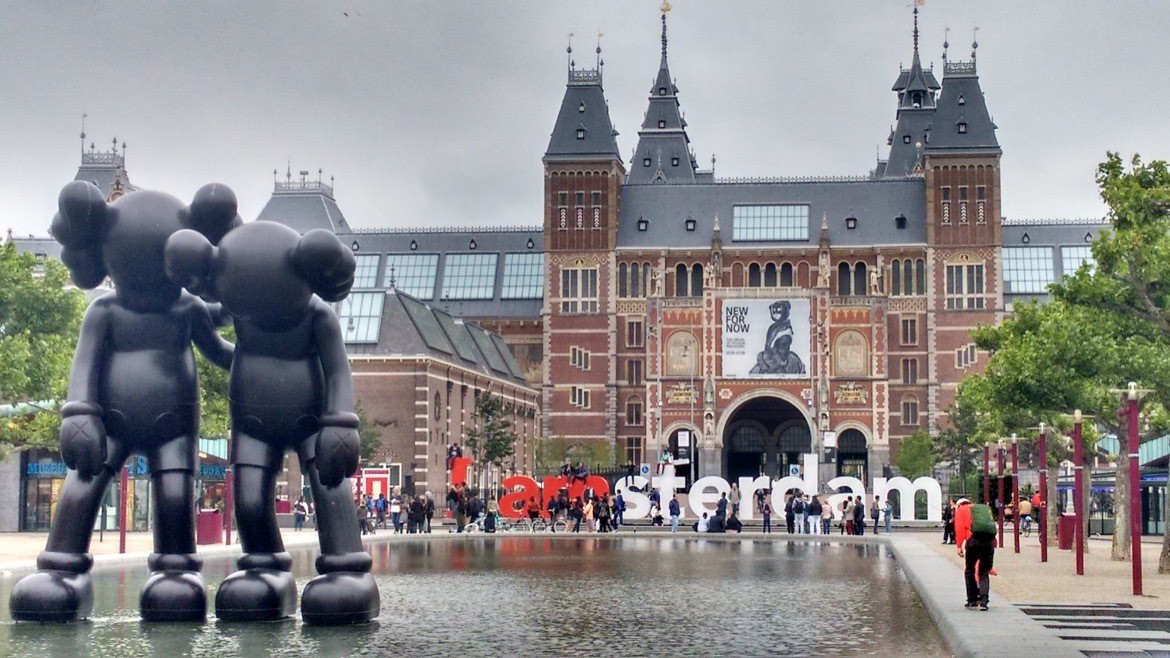 Passing straight through the museum, you’ll find yourself behind the larger-than-life I Amsterdam sign, which is literally crawling with tourists who hang off of it like monkeys trying to get a good photo.

The plaza in front of it is simply vibrant, and a hotbed of activity. A great place to grab a drink or lunch, there’s also a pool of water, a playground and a pathway leading towards other attractions such as the Van Gogh Museum where a large collection of artwork from the famed artist is on display.

Globe Guide tip: Buy the I Amsterdam City Card if you plan on seeing at least a few Amsterdam attractions, which will save you a ton of money on admission fees and also includes a free canal cruise and public transportation.

Amsterdam guide for shoppers: The 9 Streets

Without question, the 9 Streets is where Amsterdam’s trendiest residents can be found. The 9 Streets refers to a hip shopping area in Amsterdam’s canal belt, which is overflowing with cute cafes, beautiful storefronts and incredible boutiques. But be warned: it’s not cheap! 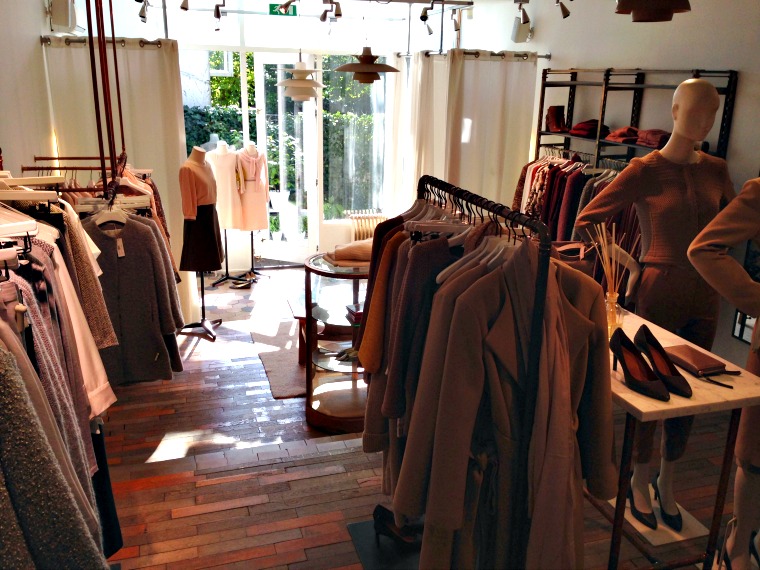 Cheese, wine, flowers, vintage clothing…you’ll find it all in these picturesque shopping alleys, which make it a must-see spot for fashionistas enjoying weekend trips to Amsterdam. De 9 Straatjes is located just behind Dam Square (another great shopping area), and dates back more than 400 years.

Don’t worry, I’m not suggesting you venture down this notorious area in search of, ahem, ‘adventures.’ However, it’s worth a quick walk through the Red Light District at some point during your 3 day trip to Amsterdam just to get an idea of what all the fuss is about. 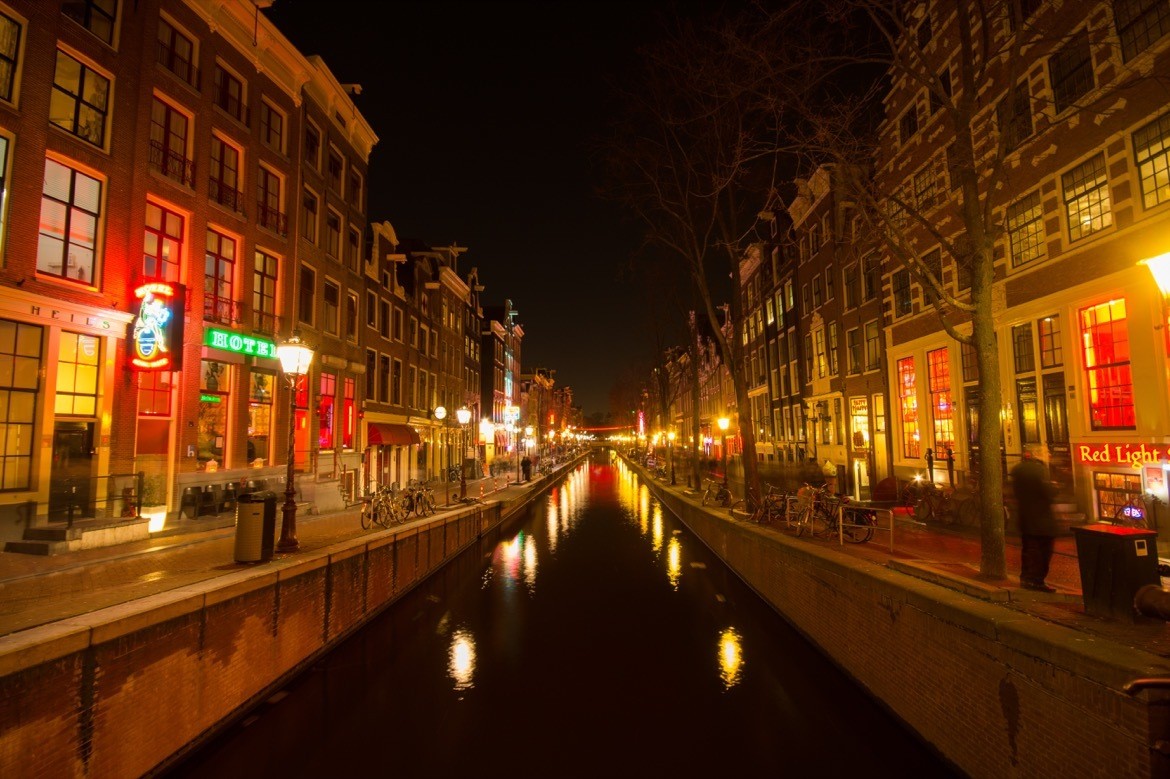 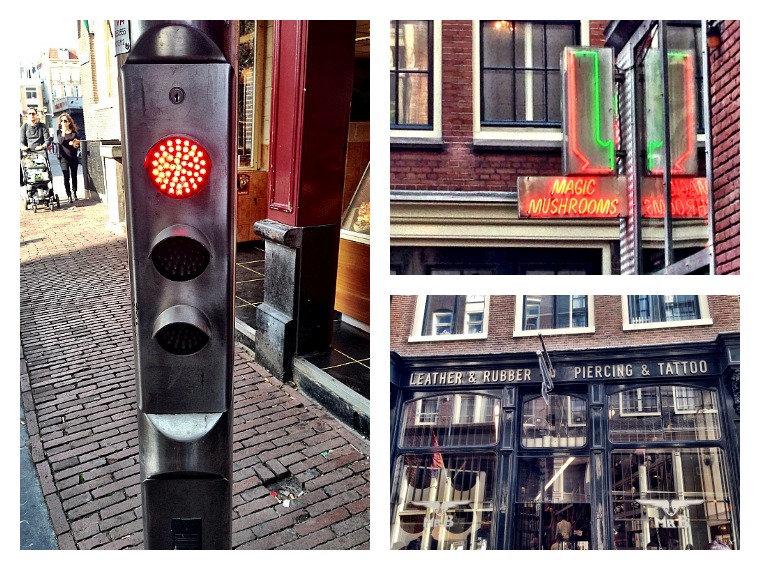 Taking up only a few blocks near the Central Station, the Red Light District has plenty of the adult stores, ‘coffee shops’ and brothels that have made it notorious, yet they’re seamlessly mixed in with innocent things like donair stalls and souvenir shops. You can easily walk through the entire district in less than 10 minutes—but rest assured it will be an experience you’ll never forget! 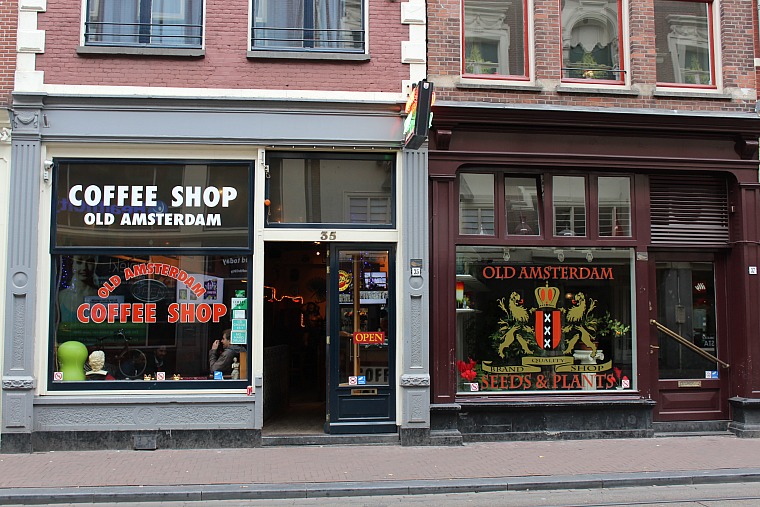 The famous coffee shops in Amsterdam.

Fun things to do in Amsterdam: Heineken Brewery Tour

For another adult experience that is decidedly less risque, head to the world famous Heineken brewery. This fantastic tour takes a couple of hours and includes details about the history of the beer empire, a VERY cool interactive video about the brewing/bottling process, the chance to make your own music video (hilarious) and of course—tasting!

You can even make your own personalized Heineken beer bottle, and a trip to the brewery is one of the best things to do in Amsterdam even if you don’t consider yourself a beer lover. The Heineken Brewery tour costs €18 per person, or €13.50 with an I Amsterdam card and includes a free gift. Click to book 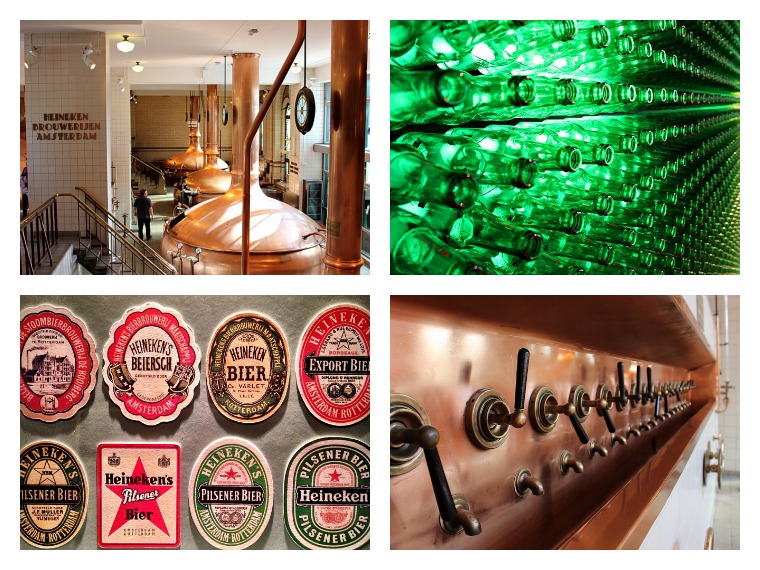 Top things to do in Amsterdam: Visit Anne Frank House

Arguably one of the best known landmarks in the entire city, Anne Frank House is where young Anne hid with her Jewish family for more than two years during World War II, and chronicled the entire ordeal in her now famous diary. 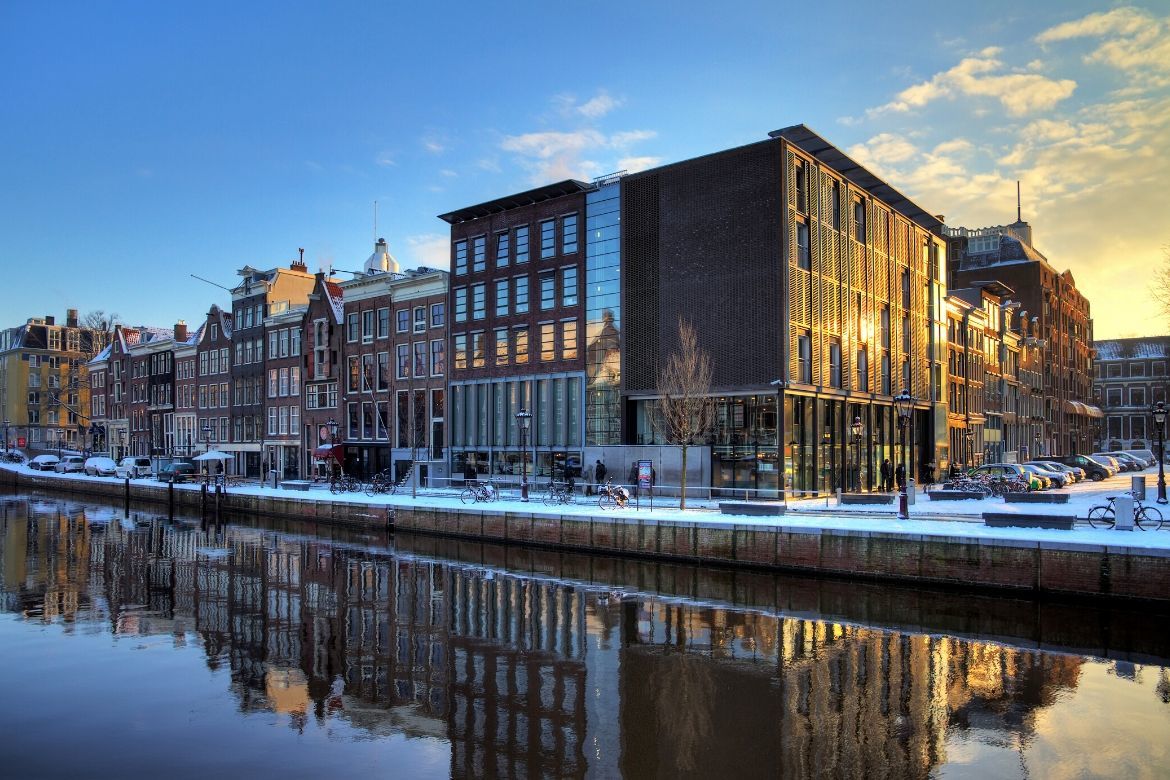 The site holds numerous exhibitions including information about those who tried to help the Frank family, and explanations about the persecution of Jewish people, and of course Anne’s famous hiding spot. 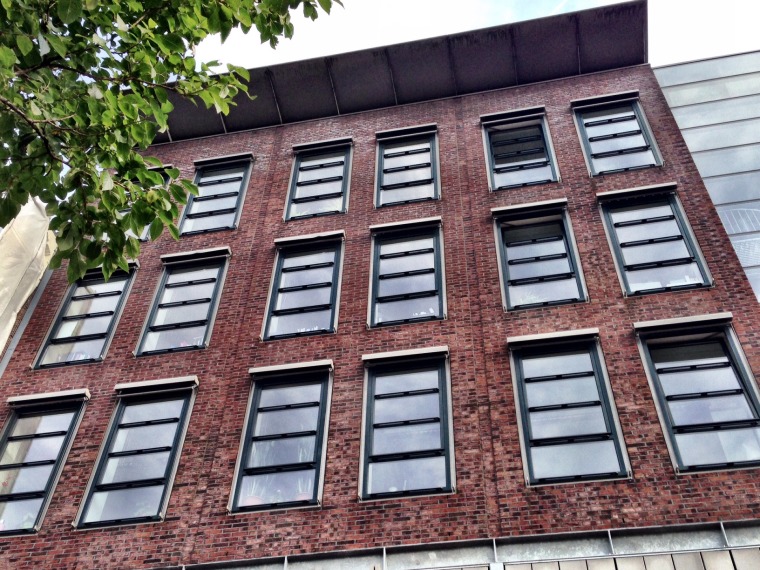 The Anne Frank House is extremely popular which can mean long lines, but it’s possible to buy tickets online ahead of time to bypass the line. It’s also open almost every single day of the year, but beware if you’re planning your visit around a Jewish holiday as you might be confronted with this sign: 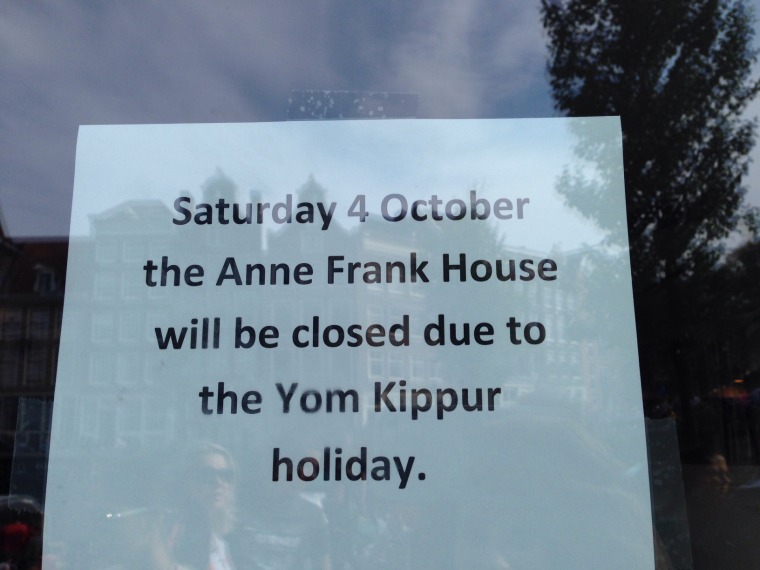 There are plenty of areas worth exploring beyond the main sites, as well as some unusual attractions. With three days in Amsterdam you should have enough time to also see: 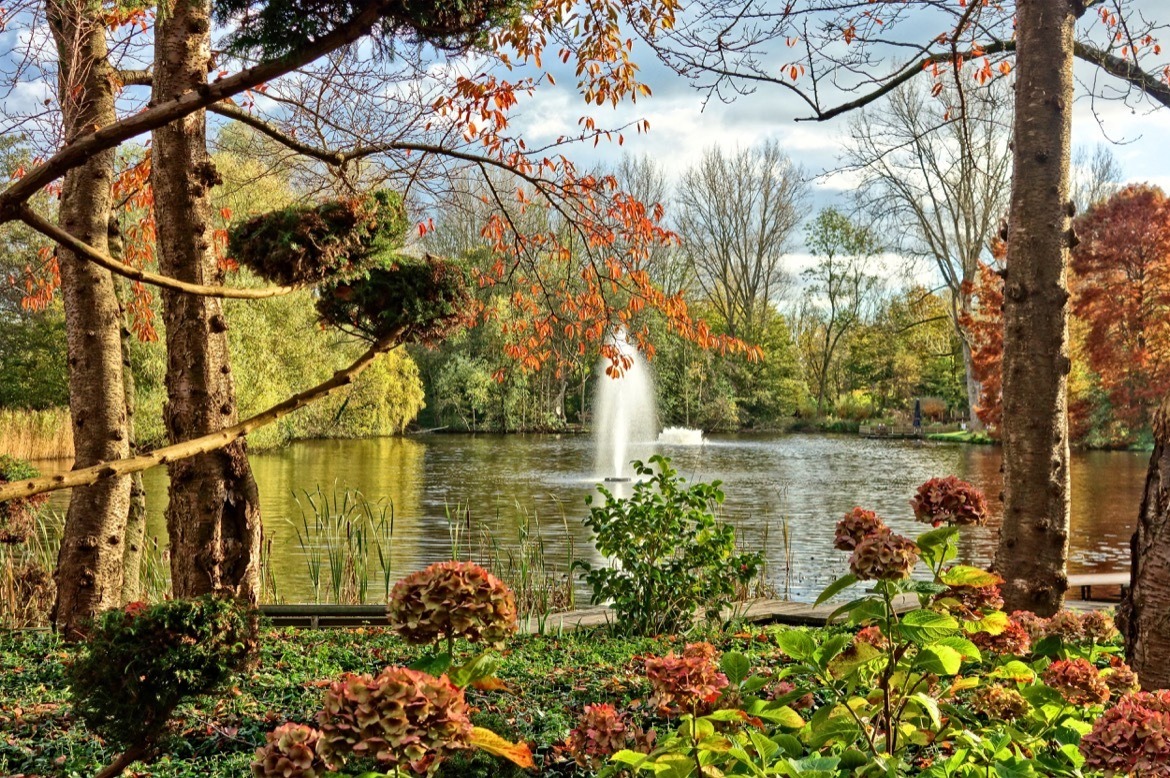 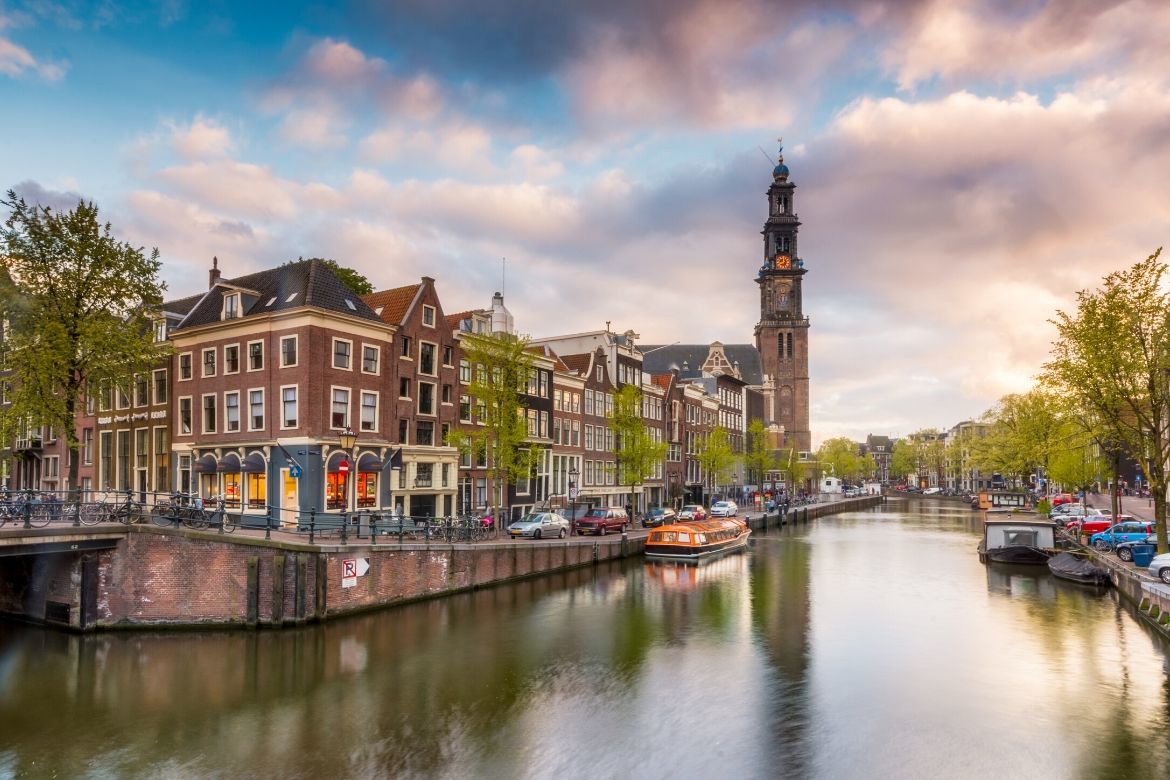 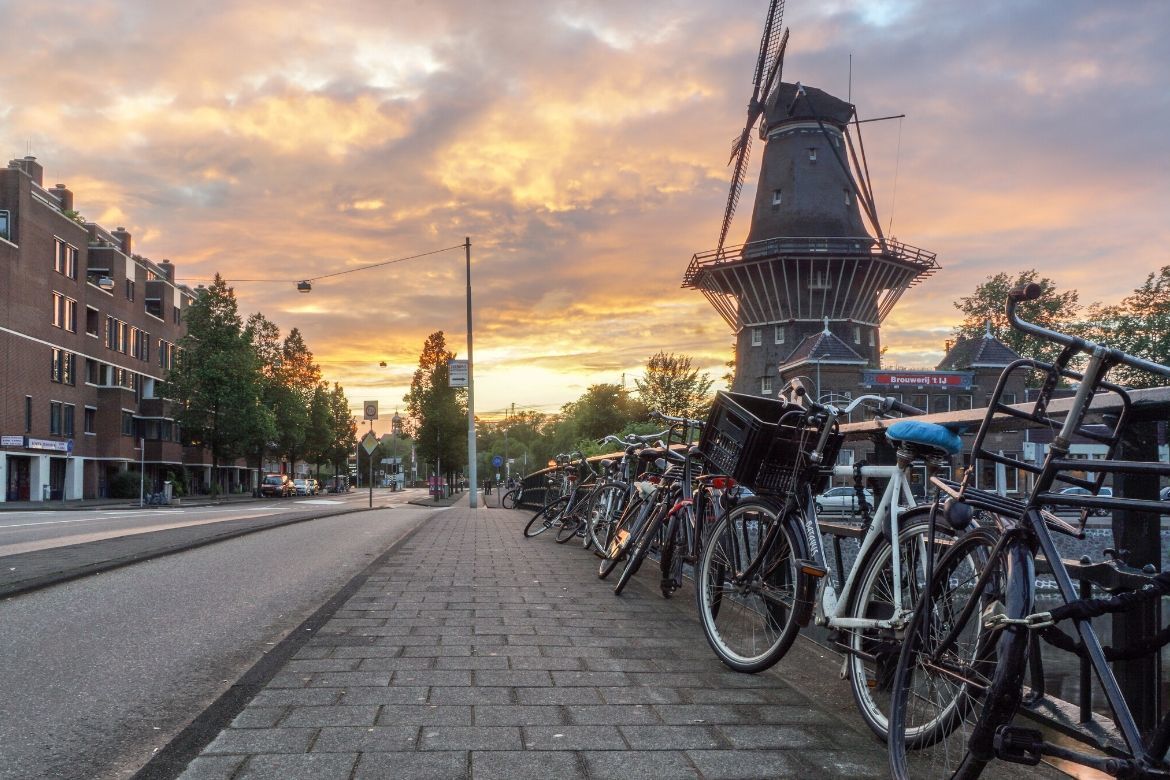 How to get around Amsterdam

It’s no secret that the Dutch love their bikes. In fact with nearly 900-thousand bikes in Amsterdam, it’s not cars, trams and buses you have to watch out for as a pedestrian—it’s the cyclists speeding by! With that in mind, it can be fun to rent a bike for the day and explore the city on two wheels. There are 513 kilometres of dedicated bike lanes throughout the city, and most importantly, no hills. 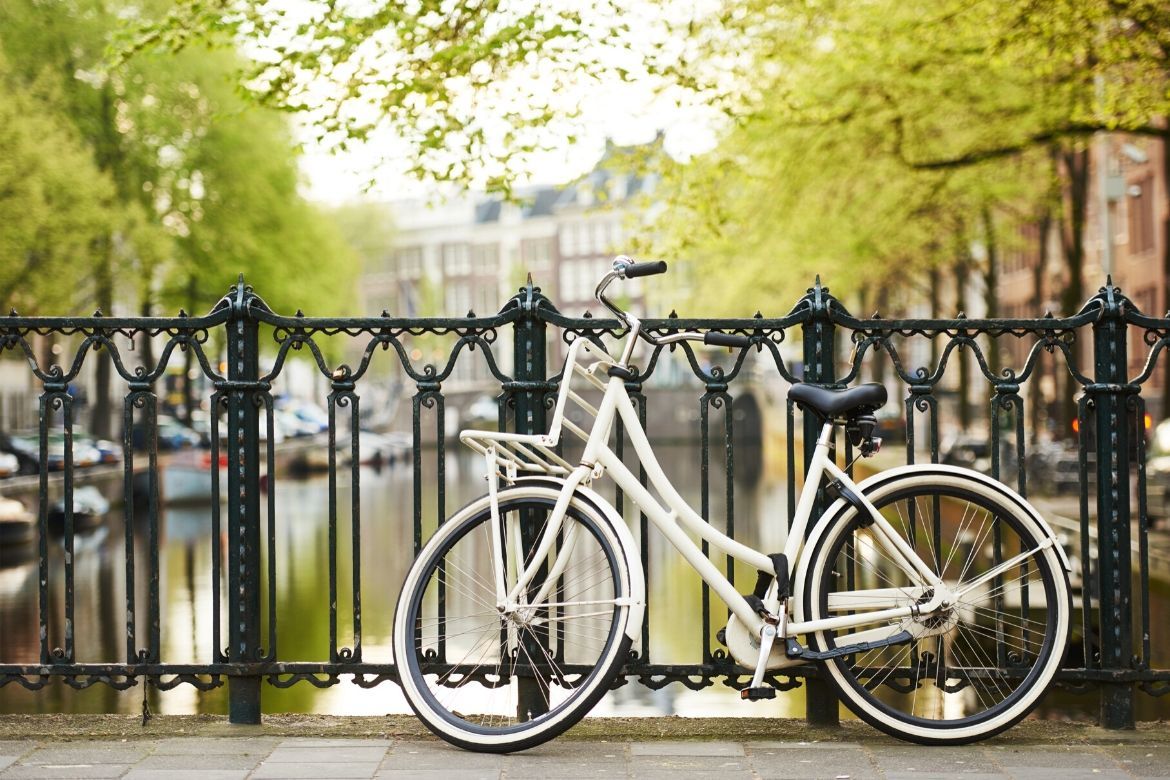 If that seems like too much of an effort, Amsterdam is surprisingly walkable (though it can be tough to track down specific addresses as the city is not on a grid system). Trams are another option for getting around Amsterdam, and they’re frequent, fast and easy to navigate. One-way tickets or day passes can be purchased on board.

Save on your trip to Amsterdam: Aside from buying an I Amsterdam Card to get discounts on transportation, attractions and restaurants, tourists can also enjoy tax free savings at many retailers when they spend minimum €50 at a single store. If you qualify, you can get cash back at Amsterdam’s airport by presenting your stamped shopping cheque. 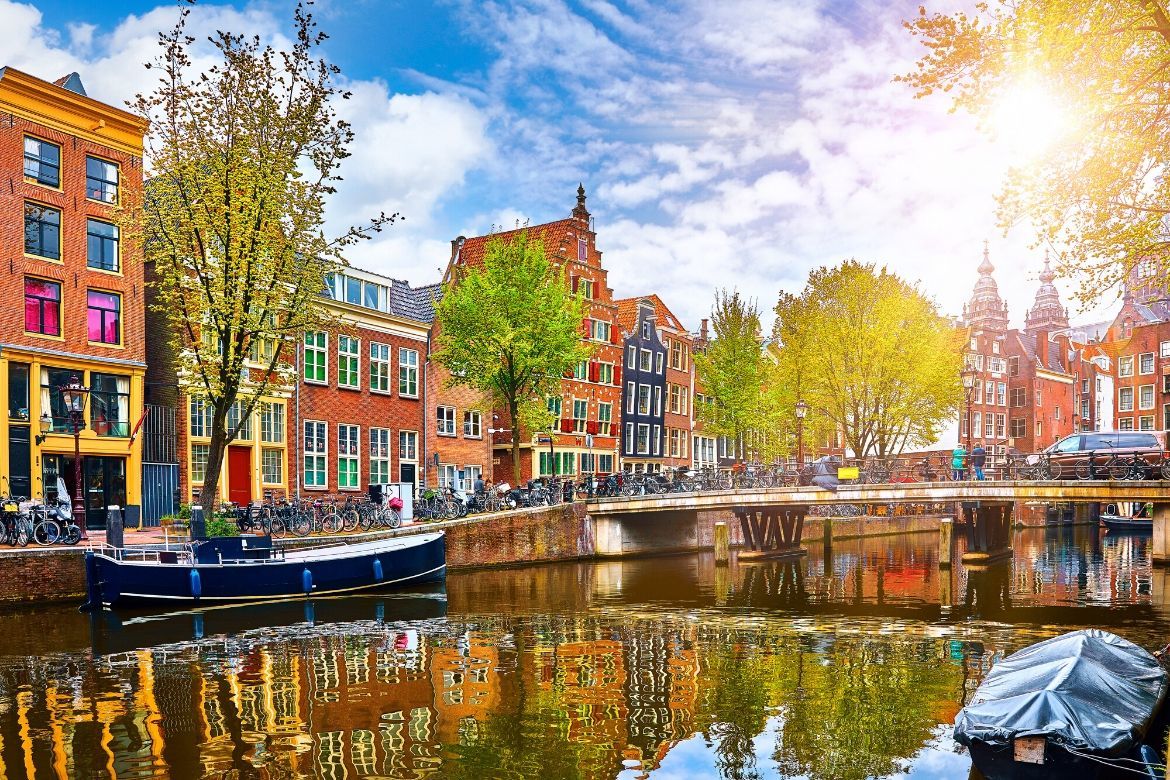 Photography tip: Amsterdam is overrun with tourists, which means it can be tough to get a clear photo of major landmarks without dozens of people in the way. However, if you get out and about by around 8 a.m. you’ll have the quiet streets all to yourself.

Where to stay in Amsterdam

The hub of activity is near Dam Square and the Central Station, and both areas offer good food, lodging and shopping options along with being on the major transit lines. However, hotels in Jordaan or near Oosterpark can give you a reprieve from the swell of tourists, and have a quieter, neighbourhood feel. Some top-ranked options include: 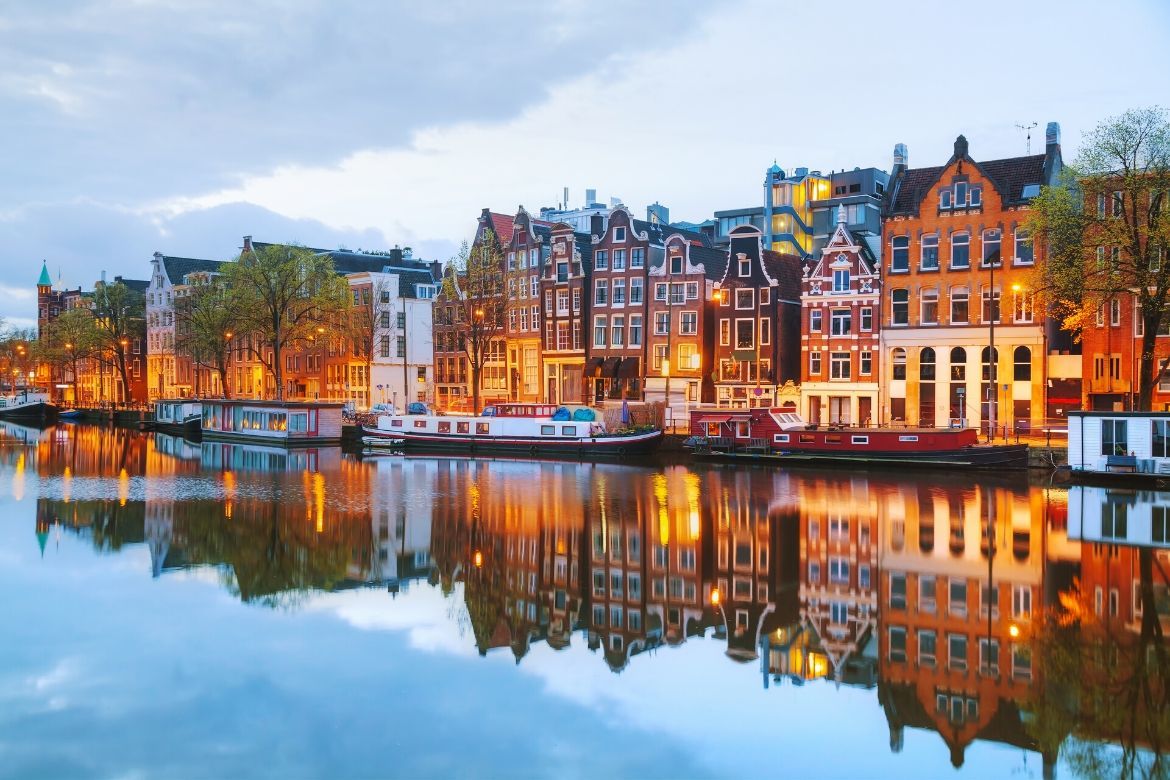 If you don’t mind some long days, it’s possible to do almost everything mentioned here during three days in Amsterdam, and still have time for a fun excursion outside the city. The charming village Zaanse Schans is just one hour away, and has some of the best windmills near Amsterdam. Haarlem is just half an hour away, and you can even head over to Belgium to spend a day in Brussels or the fairytale-like city of Bruges.

Other fun Amsterdam day trips include: 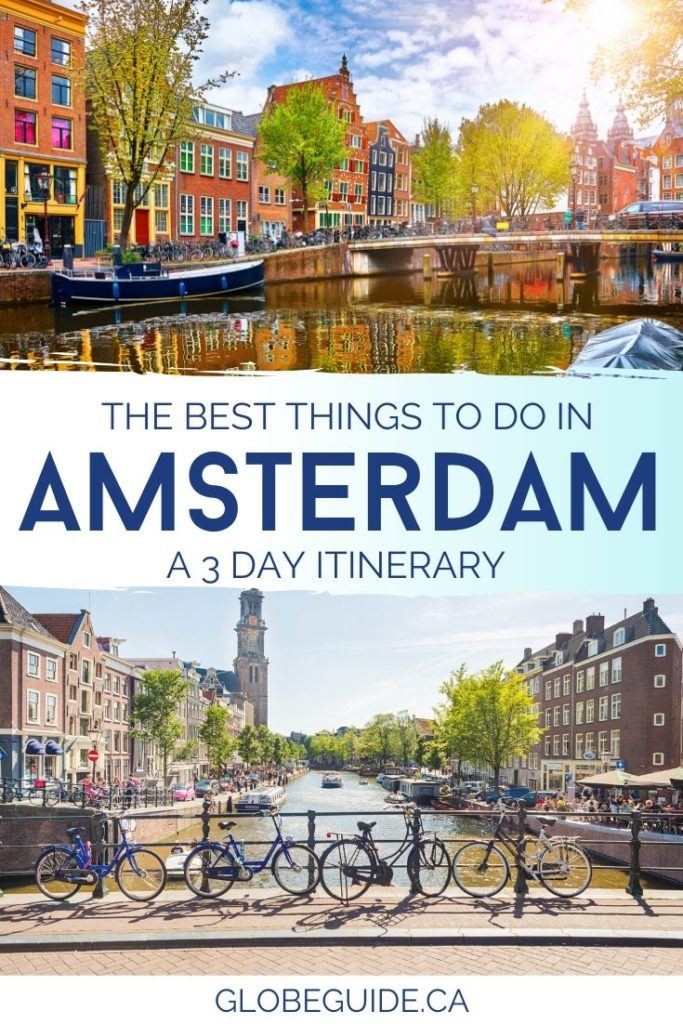 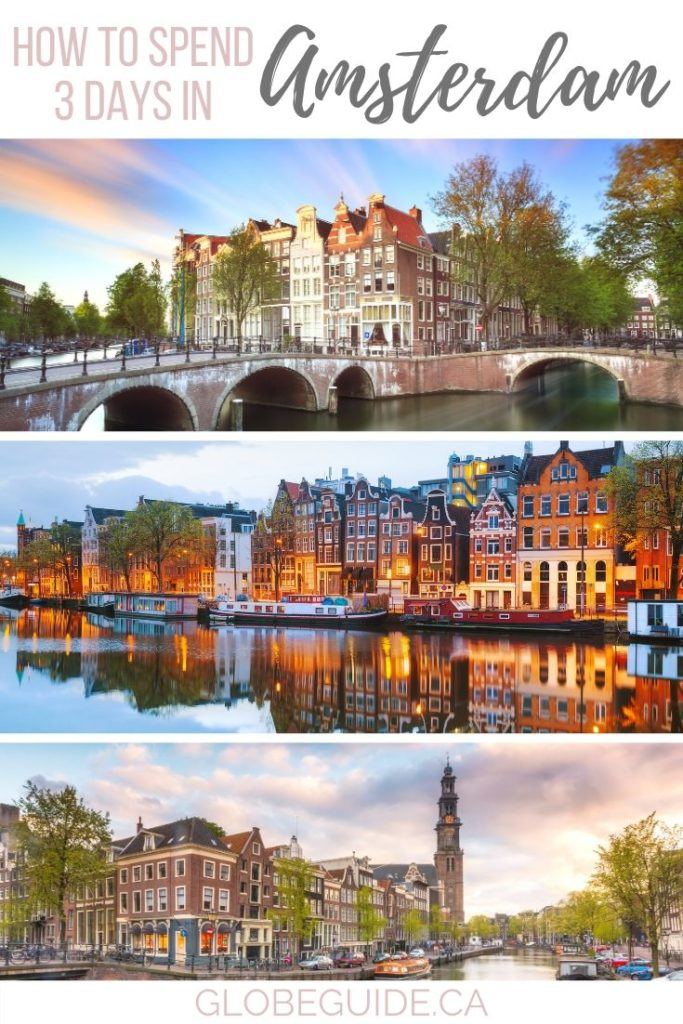 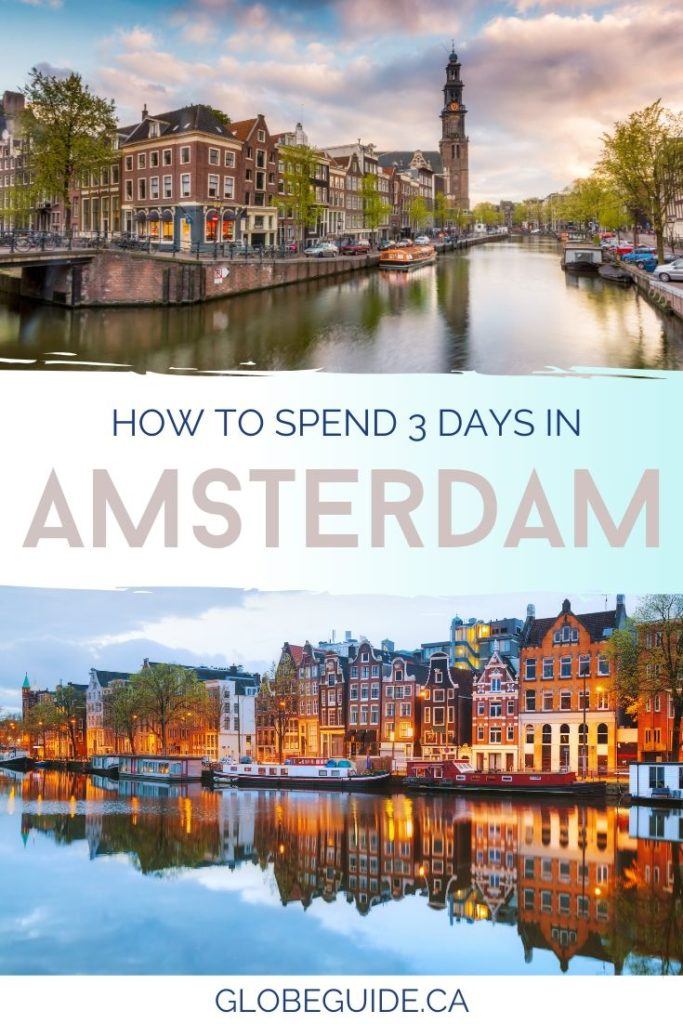