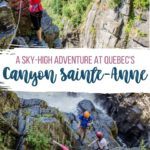 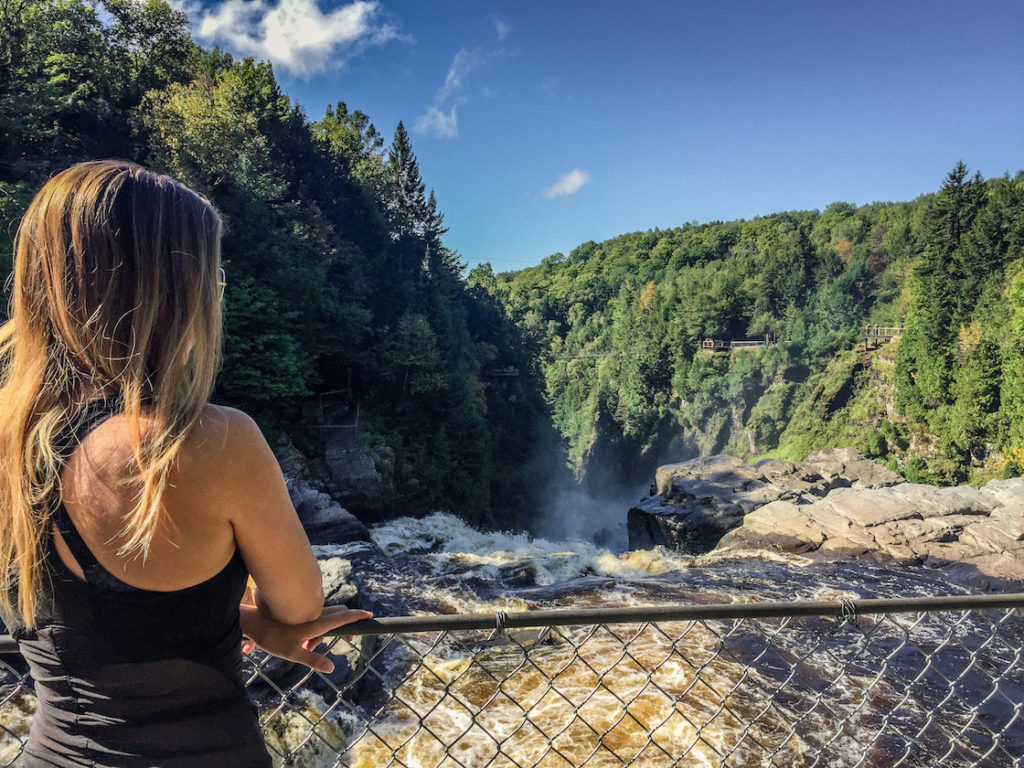 As I stared straight down at the lush, green Canyon Saint-Anne and the thunderous waterfall gushing through it, I felt like I was about to cry. Not from the beauty of it, but from fright.

That’s because I was just seconds away from stepping off a tiny wooden ledge and dangling over the sprawling crevasse 60 metres below, the only things keeping me suspended in the air being a wire line, thick ropes and carabiners.

I’d already watched my travel companion Tim strap himself onto the zip line stretching over the rocky crevasse, and he let out a small cheer as he slid across the wire, quickly closing the 60-metre gap between the platform I now stood on and the one on the other side. He waved at me to join him, and frankly I had no other choice as there was already a line of people harnessed in behind me, snaking across the mountain ledge. But instead of being a champ about it, I started swearing. A lot. I was seriously supposed to just hop off this teeny platform and dangle over a waterfall?! 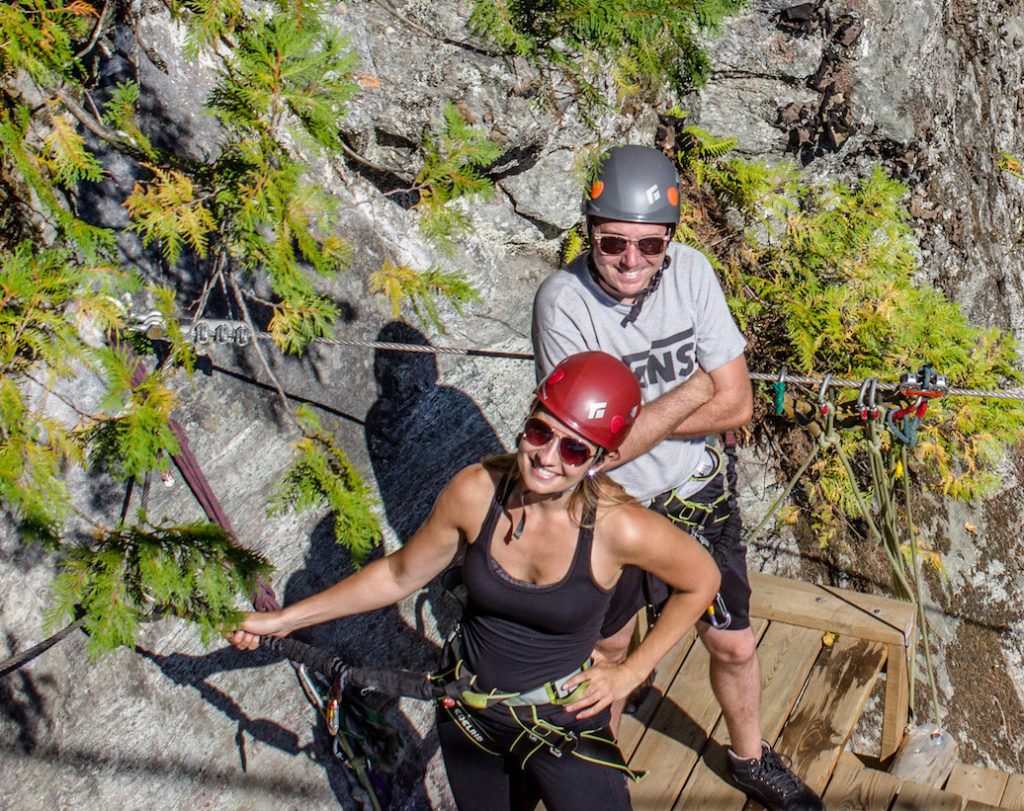 Smiling…and crying inside at the same time

And that’s when Sebastien came to the rescue. A guide with Projet Vertical which runs the zipline operation at Quebec’s Canyon Sainte-Anne, he literally talked me off the ledge, patiently demonstrating the numerous safety features which make it physically impossible to become detached from the zip line, and encouraging me to hang above the platform in my harness to get used to the feeling while ensuring I wouldn’t slide away.

Once I felt how secure the harness was and the encouragement of everyone around me, I figured it was about time to stop being so dramatic and instructed Sebastien to let me go before I changed my mind. And with that, I was off! 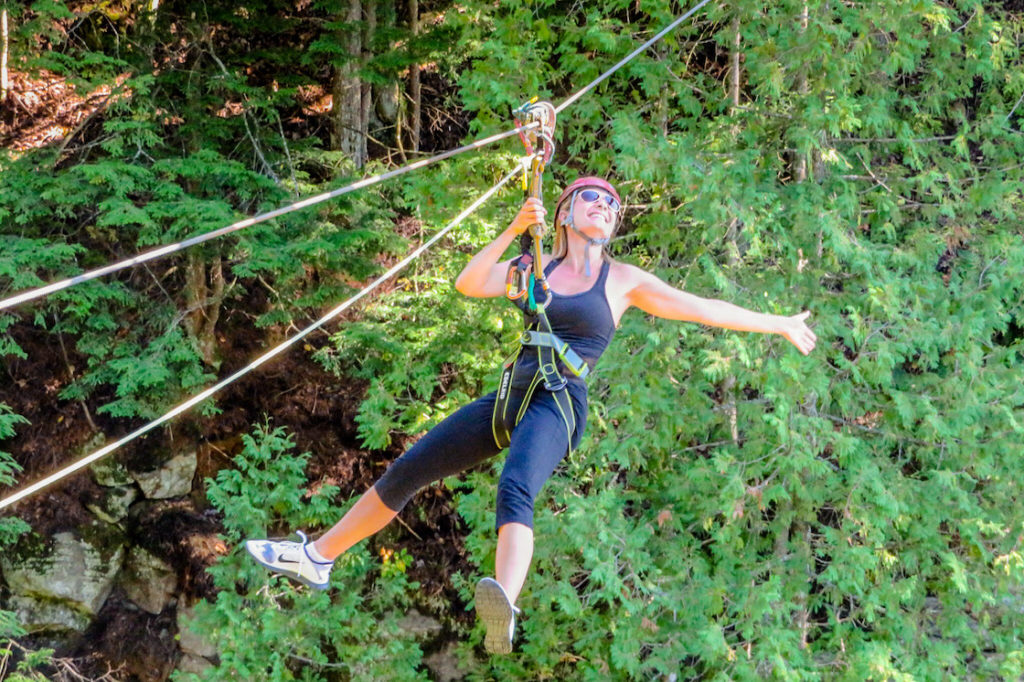 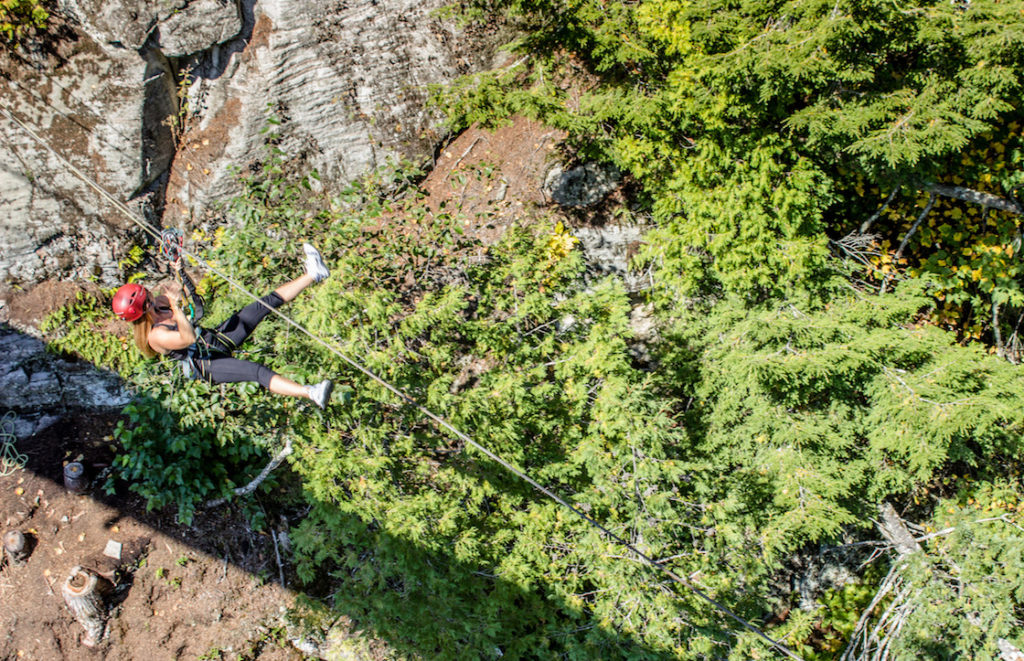 Turns out it wasn’t so bad after all. In fact, it felt absolutely amazing, and not the least bit scary. I slid towards the centre of the wire with Sebastien still holding the other end of the rope controlling my speed, and he left me suspended straight above the waterfall. I felt as free as a bird, and let’s just say the view wasn’t half bad either. 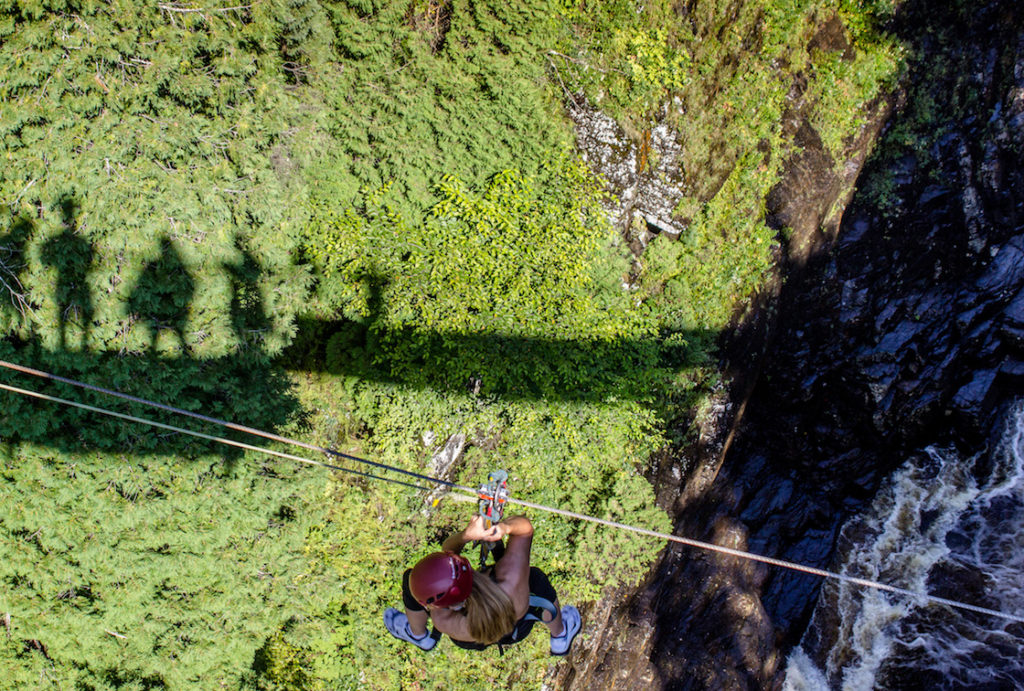 A crowd of onlookers had gathered on a suspension bridge behind me and cheered as Sebastien pulled me back towards the platform, and I whooped with delight. “You ready to go upside down?” he called out. Dude, I was born ready.

Channeling my inner Cirque du Soleil acrobat, I quickly leaned backwards in the harness and flipped so my feet were straight above my head, giggling as I felt Sebastien release the line, floating me back across the canyon to the other side where Tim waited. “Well that wasn’t so bad!” I exclaimed while unclipping the harness, sending it back across as I scampered off the platform to solid ground. “Think he’ll let us do it again?” 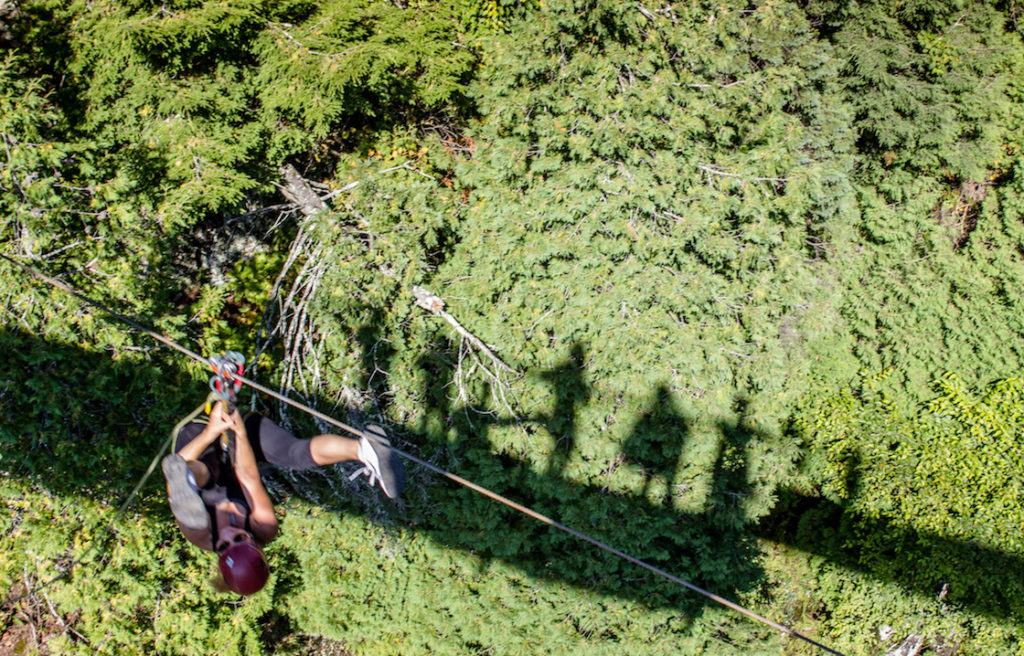 Proof I went upside down! 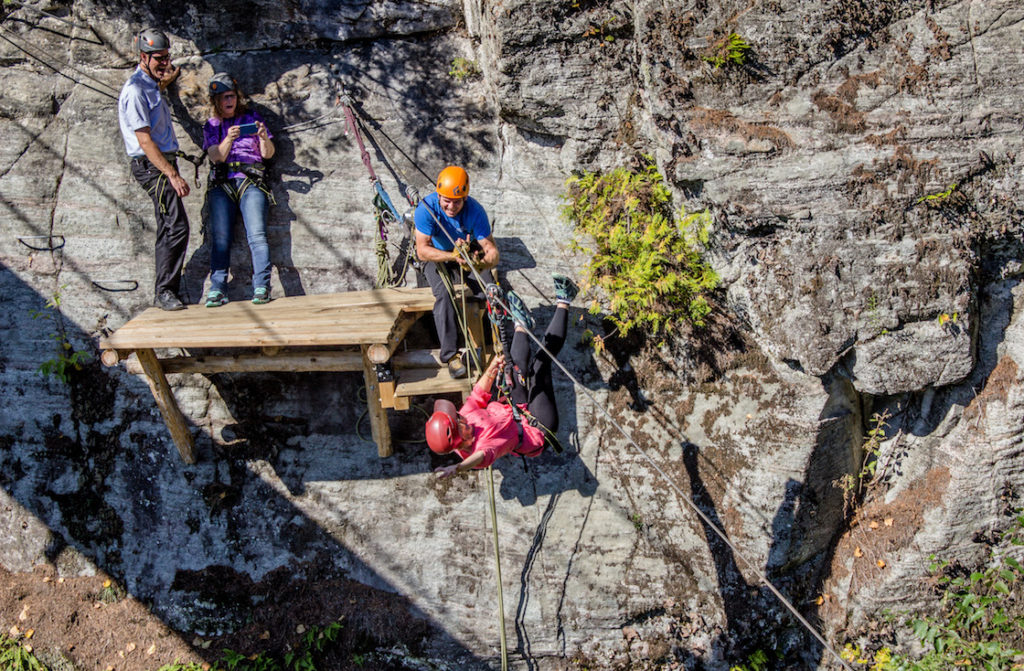 My pal Marybeth tackling the zipline

The Canyon Sainte-Anne via ferrata

Lucky for us, the zipline isn’t the only way to test your limits at Canyon Sainte Anne. Along with hiking and the AirCANYON ride where guests buckle up and glide 90 metres above these Quebec falls, the via ferrata course is another fun way to explore. Outdoor adventurers can harness up, then navigate their choice of three routes along the sheer rock faces that border the 74-metre waterfall—the ultimate way to explore the natural area which was formed by the meeting of the St. Lawrence Lowlands and the Canadian Shield. 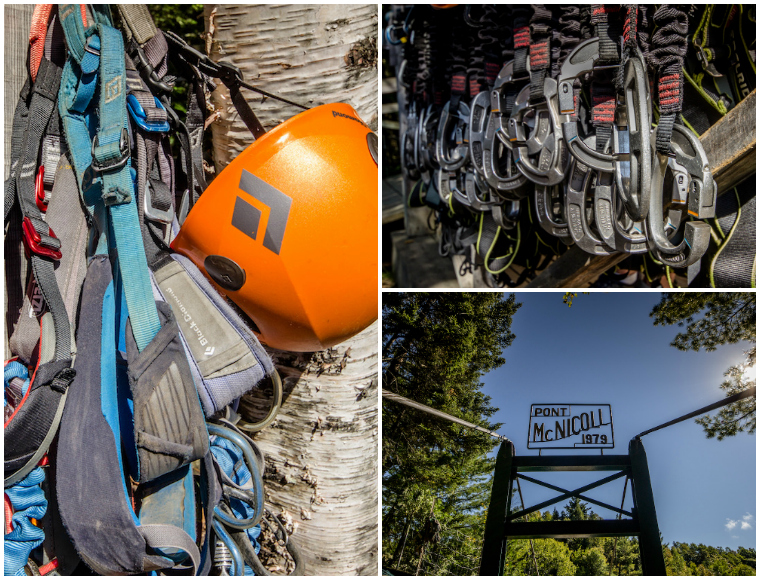 Our (somewhat) fearless group decided to tackle the Canyon Sainte Anne via ferrata as well, fastening ourselves to the steel cables affixed to the slopes and rocks along the course. Again it was completely safe, since instead of clipping/unclipping carabiners we maneuvered them over specially designed clips, thus never detaching from the thick wire. 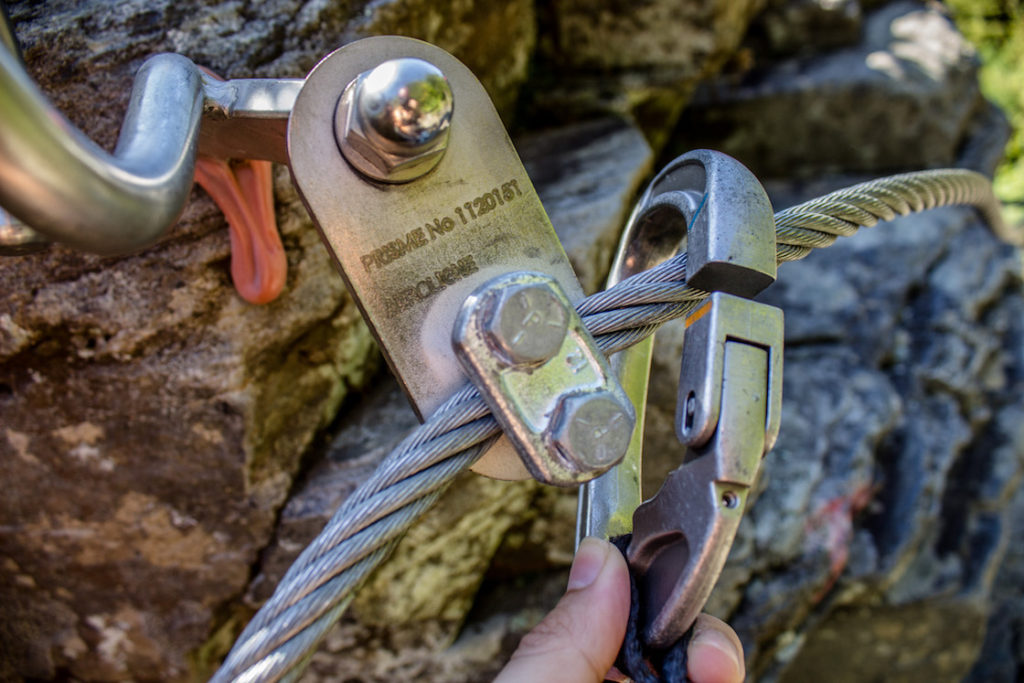 Similar to the zipline it was somewhat unnerving to start off, particularly as the first obstacle was to walk across what’s essentially a tightrope suspended over part of the canyon. But this time I felt fully in control as there was always something to latch onto, whether it was a rock, one of the metal footholds pounded into the rocks, or the cable itself. 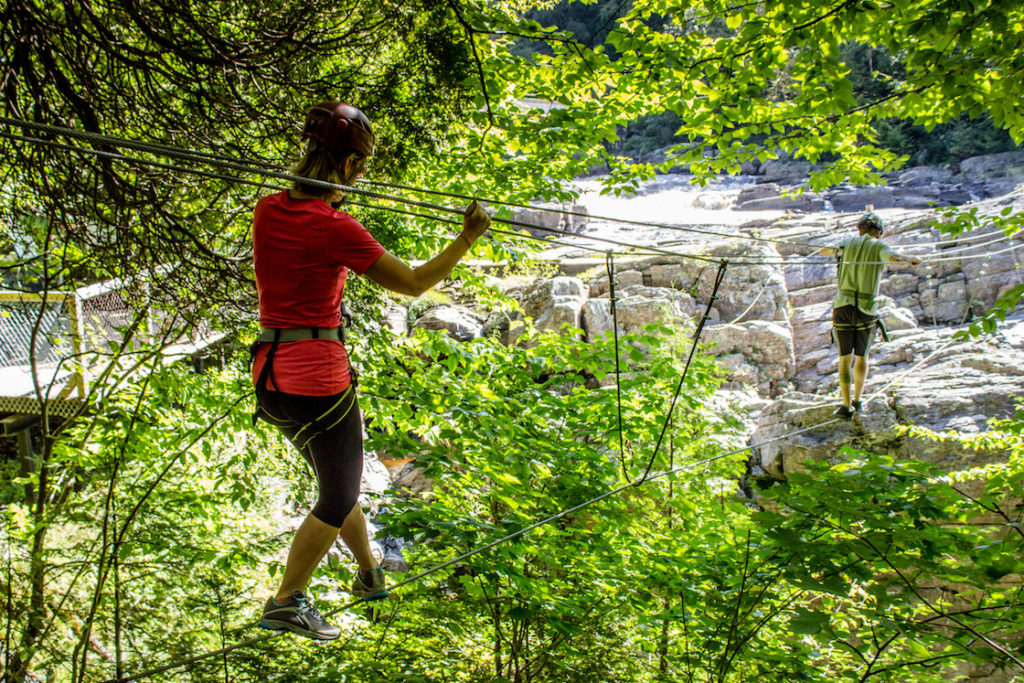 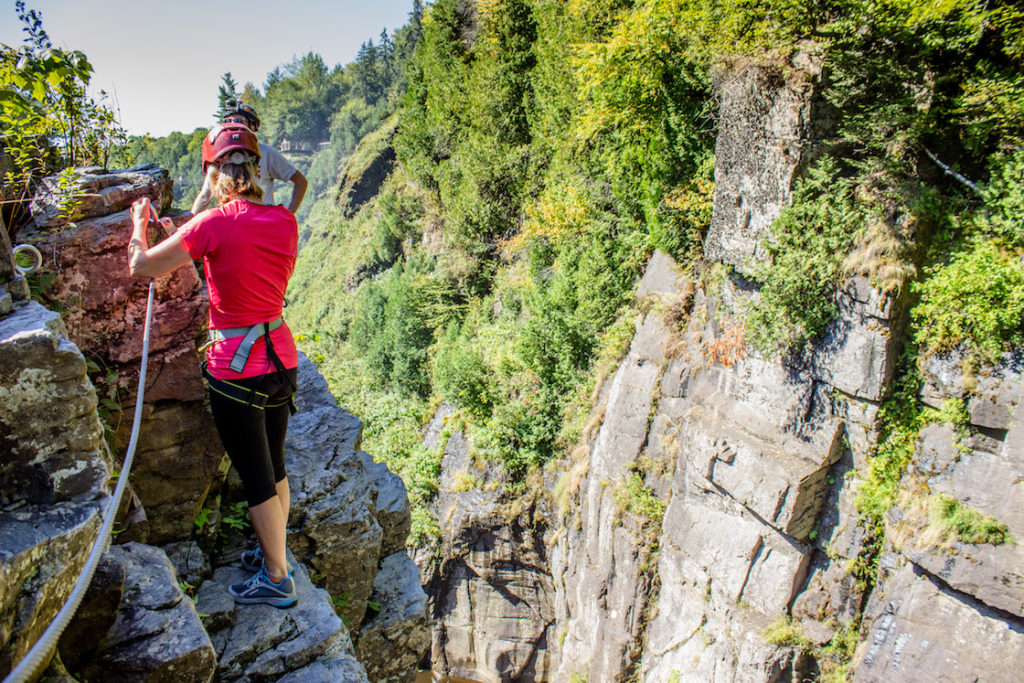 Once we made it across the crevasse and onto a cliffside that jutted out and around the waterfall, the rest of the course was actually quite straightforward. We would take turns scrambling across a rock face, sliding the carabiner over the clips along the way, then stop to soak in the spectacular scenery around us as the next person followed behind. 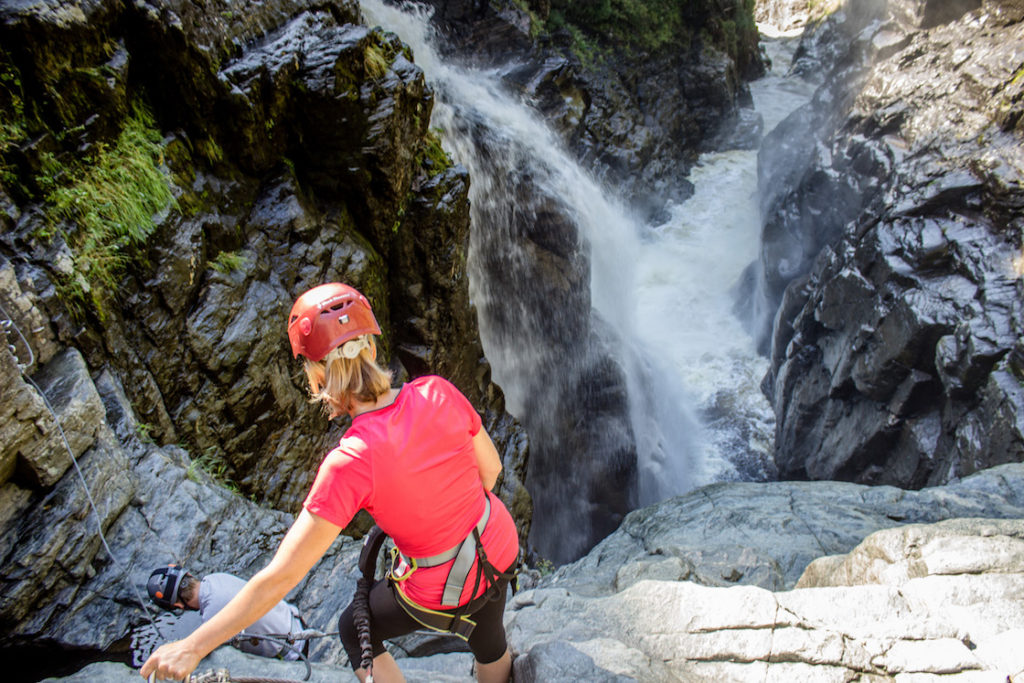 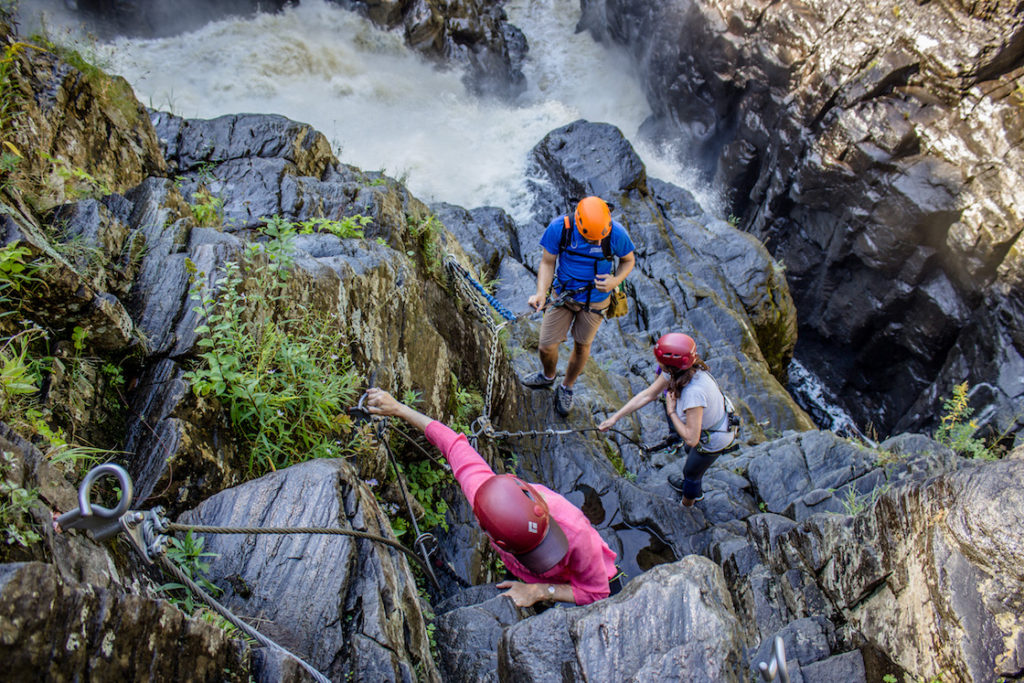 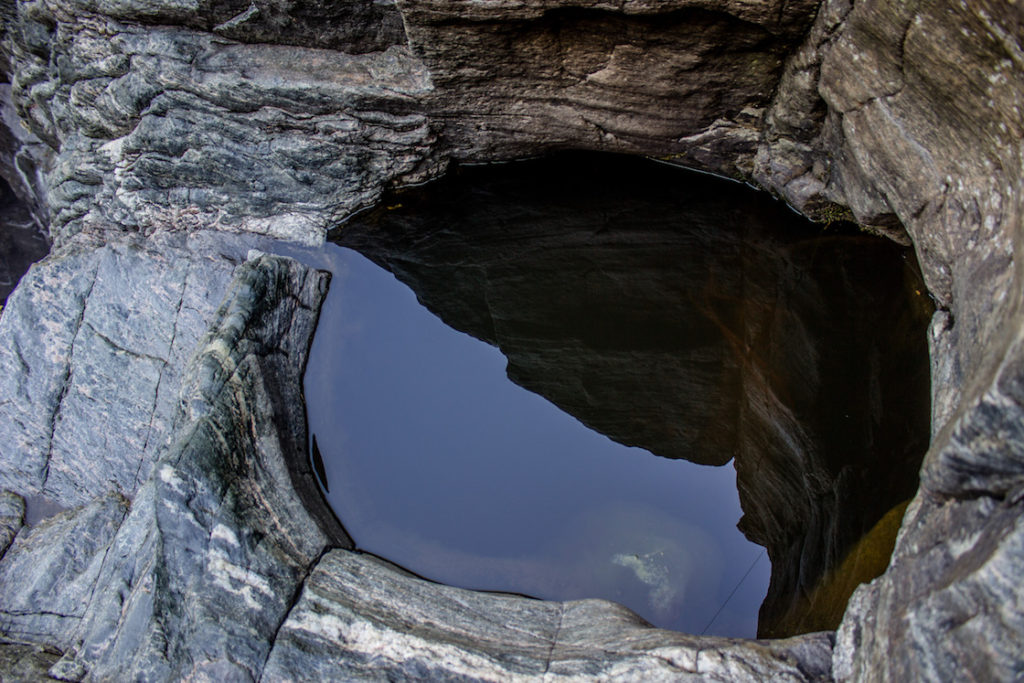 A pothole in the rocks

Our guide Oliver was happy to help those not feeling quite so sure-footed by coaching them through the course, and we marvelled as he hopped around the wet rocks without a harness. Mountain goats have nothing on that guy. I felt rather Spiderman-like myself while hopping between boulders, and made it through the course in about 45 minutes. 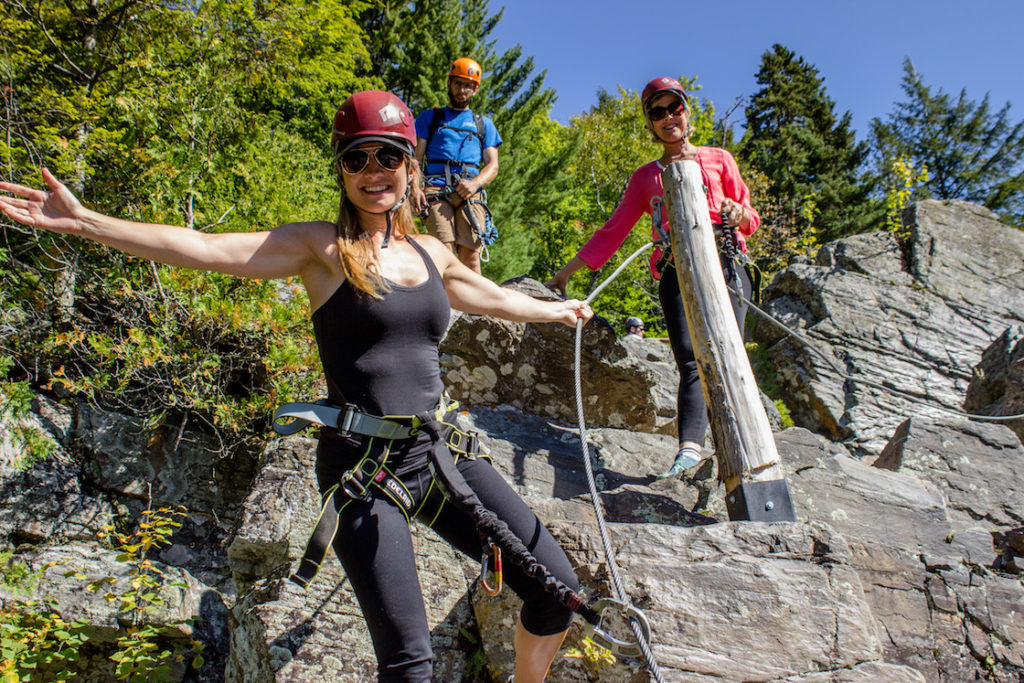 Our afternoon of adventure wrapped up with a scenic walk along the pathways and over one of the three suspension bridges, stopping often to stare in awe at the thundering waterfall gushing through the canyon. As if the view couldn’t possibly get any better, a rainbow appeared—the perfect reward after a day of pushing our limits in Canyon Sainte-Anne. 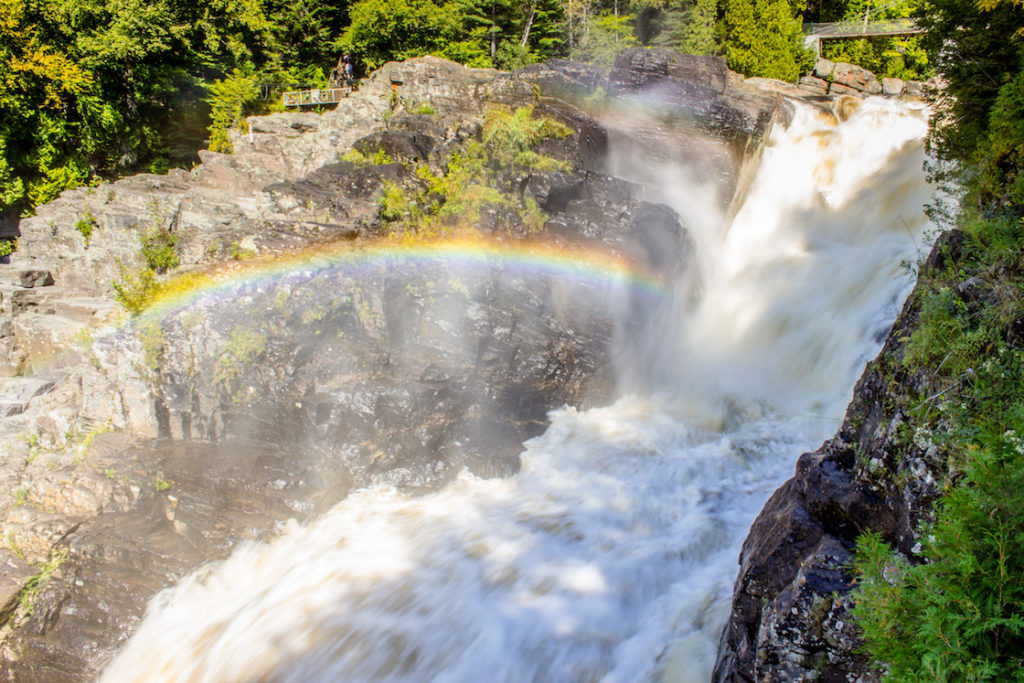 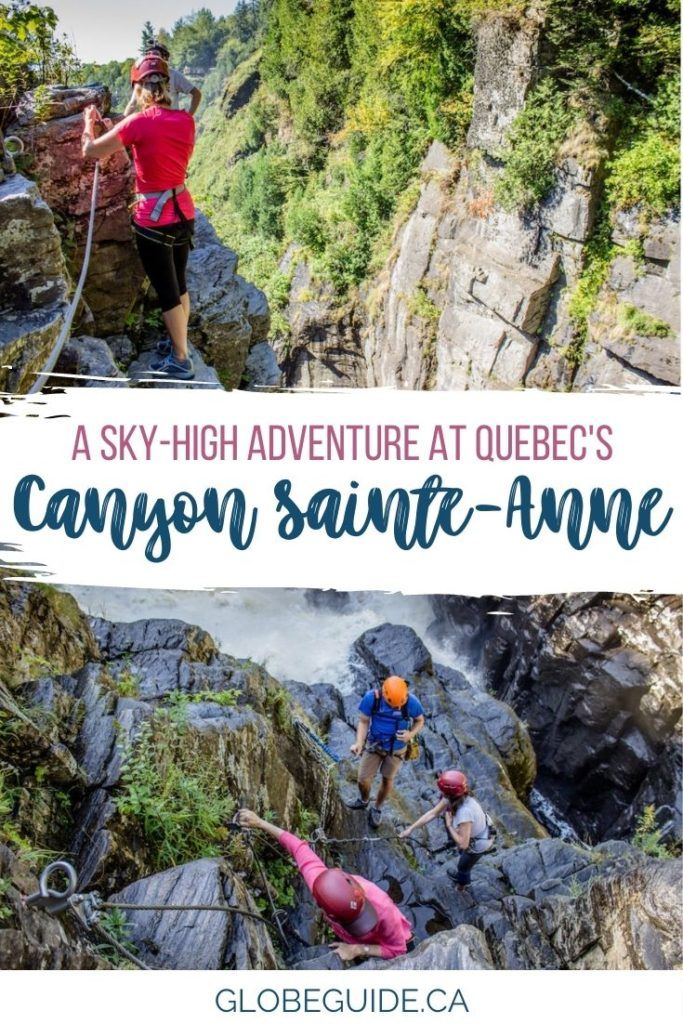 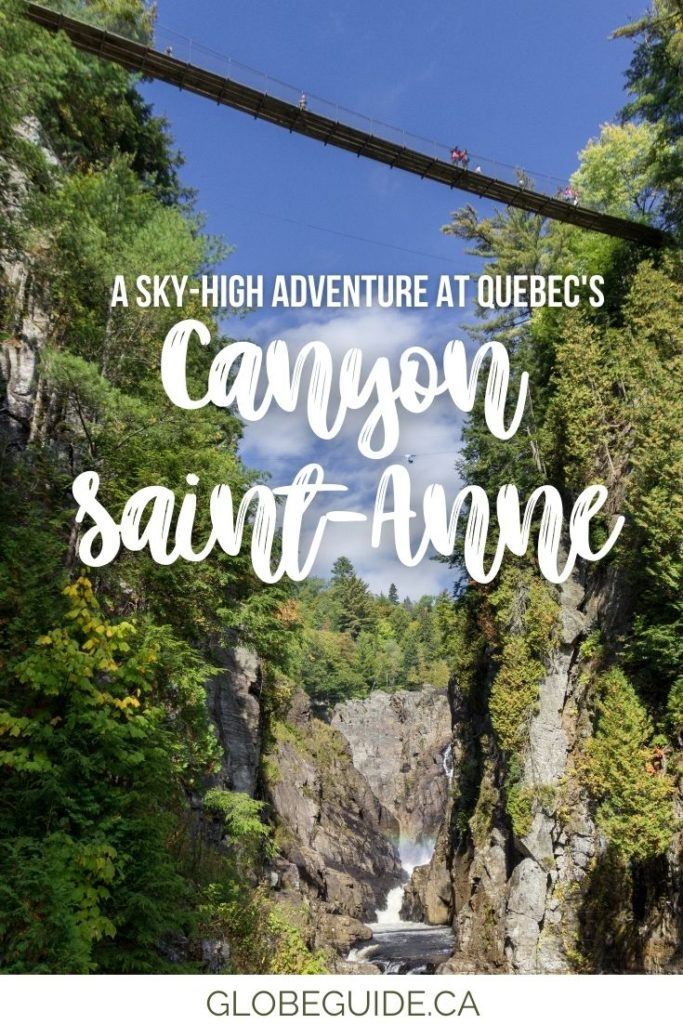 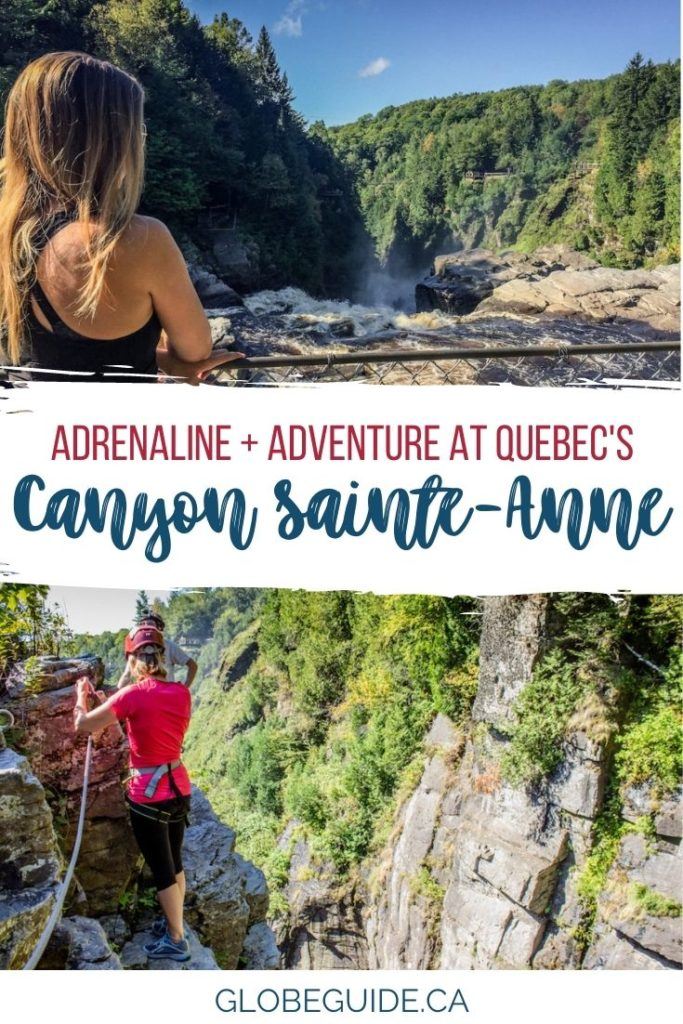 Globe Guide explored Canyon Sainte-Anne in collaboration with Quebec City Tourism. As always, hosts have no editorial influence on articles.