Florida: A guide to Miami, Fort Lauderdale, the Everglades and Orlando 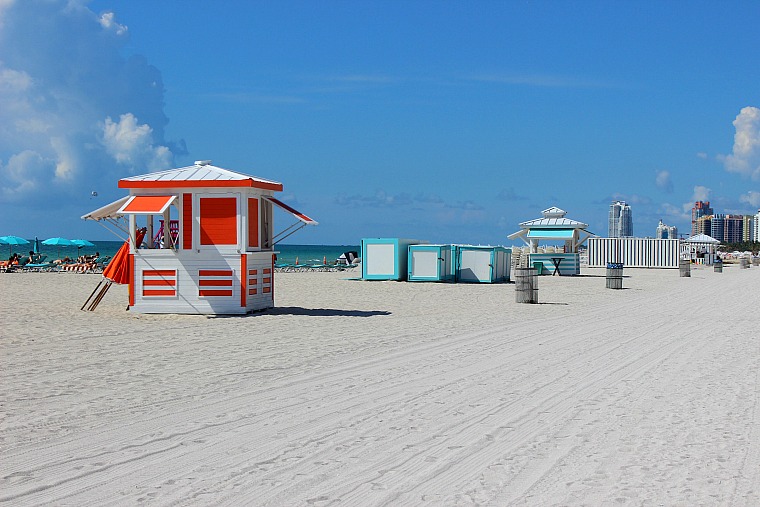 They don’t call it the Sunshine State for nothin’. Blessed with a tropical climate that means perfect beach weather nearly year-round (unless there’s a hurricane bearing down, of course!), Florida is the perfect place to come for some fun in the sun. Whether you plan to brave the amusement parks with the kids or hit up South Beach to take in the eye candy, there truly is something for everyone.

About the closest you’ll get to Cuban culture without leaving the United States, Miami boasts an energetic mix of Latino flair, high-end shopping, outdoor promenades and white-sand beaches—often frequented by celebrities.

Starlets and professional partiers flock here for what is perhaps the country’s most vibrant night life, and it’s not uncommon to come across a luxe nightclub with a pool in the middle of it (which doesn’t seem terribly safe to me, but that’s another story…). If Miami is on your itinerary, be prepared to tan. And party. And repeat. 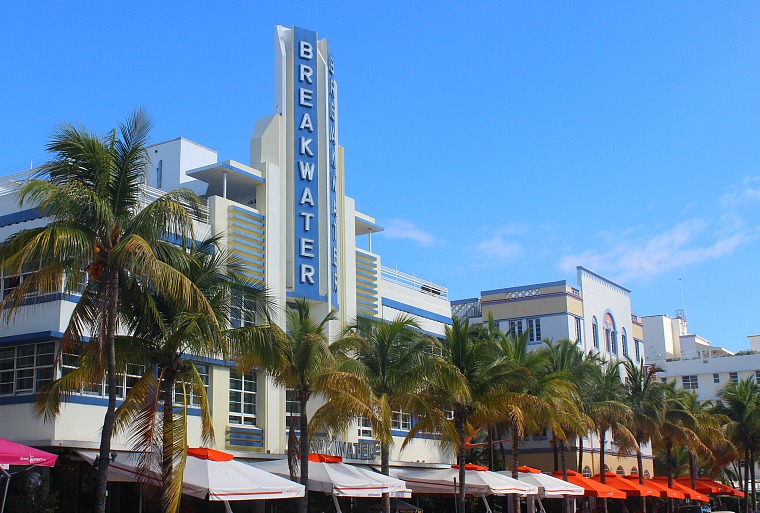 South Beach is the highlight of any stay in the city, and the hub of activity. It hosts hundreds of high-end hotels, restaurants and clubs, and is THE place to be for those who want to be seen.

A perfect trip to SoBe consists of sipping mojitos on the patio, before heading over to the white sand beach and braving the waves for a morning dip. Lounge the day away before escaping the sun for some shopping along Collins Avenue in the Bal Harbour Shops. The open-air complex features luxury retailers like Louis Vuitton, Chanel and Bvlgari. If that’s a bit too pricey for you, nearby Lincoln Road offers more budget-friendly stores, and also has great options for a la carte dining. Head back to your boutique hotel (there are a lot of them!) to prep, before heading out to one of the dozens of clubs to dance the night away. 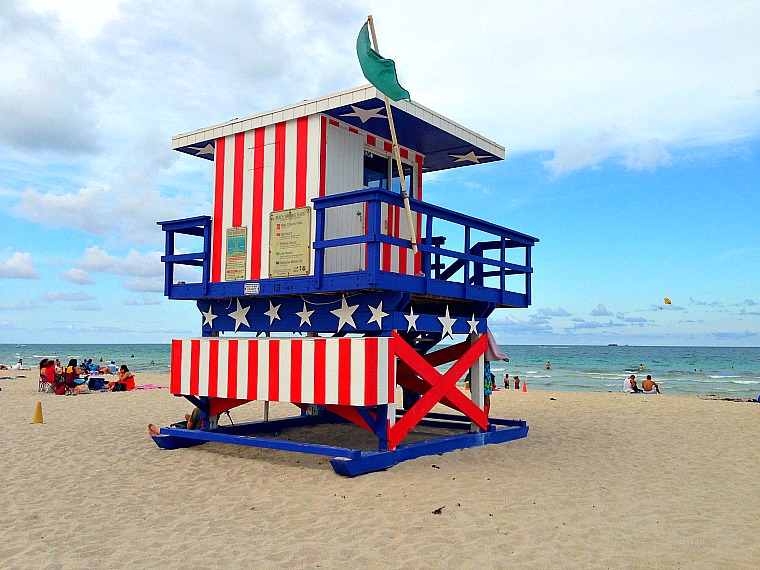 Fort Lauderdale is like Miami’s smarter, older sister. It features similarly stunning beaches and numerous eating and shopping options, but the vibe is decidedly more laid-back then South Beach’s hot-headed chauchy style. Being the gateway to the Caribbean, many people heading out on a cruise will stop here for a couple days before boarding the ship, which makes certain areas quite touristy. In fact, over three million people head to Port Everglades every year! Ft. Laud is only about a half hour drive from Miami, which also makes it a good base for your south Florida adventures—as you won’t have to pay South Beach prices.

A favourite district of mine is Las Olas, which is made up of a number of quaint boutiques, art galleries and of course, the beach. A great way to see the area is to rent a bike and cycle along Las Olas Boulevard, so that you’re free to pop in and out of stores as you please. Anyone who has been somewhere like Sedona or Banff will appreciate the area’s artisanal charms. Oh, another great thing about Florida is that you’re allowed to leave a bar with your drink, meaning you can order a Bellini for the beach!

Of course Florida is famous for its golf, and there are over 40 courses in the area open year-round. If you’d rather shop ‘til you drop, head over to the glistening Aventura Mall which has hundreds of stores to suit all budgets. You can get there on the bus, but it’s better to rent a convertible to get around. Hey, you’re on vacation after all!

If you’ve always wanted to get up close and personal with an alligator, this is your place. You know in movies when you see the toothless guy wrestling the ‘gator in a dusty pen? Well…that pretty much sums up the Everglades.

The national park is made up over 1.5 million acres of wetlands and wilderness, and is home to snakes, birds, panthers, rats, deer, turtles and crocodiles. The tropical wetlands are surprisingly serene—other than the whirring of the boats going by—and a trip to this national treasure really is an incredible chance to see animals in their natural, untouched habitat.

There are a number of safari and alligator parks throughout the Everglades, and the highlight of any visit is a ride on an airboat through the marsh. A group of a dozen or so will hop on the propeller-driven boat, and speed through the wetlands, snapping shots of the huge birds flying overhead, or the elusive alligators poking the top of their heads out of the water. Just make sure you hold on to your hat—it can get awfully windy! Oh, and keeping your extremities inside the boat is also highly recommended. Pricing usually starts at about $20 per person for a half-hour ride, which usually includes some sort of interaction (from behind the safety of a fence!) with an alligator back at the base. Most tour companies also have gift shops and restaurants—alligator soup, anyone?

It only takes about half an hour to drive to the Everglades from Miami, and an hour from Fort Lauderdale. If you don’t have a car, it’s easy to book a tour to the park from either city, and hotel pick-up is usually included.

Take a Florida road trip by heading a few hours up the highway to Orlando, the amusement park capital of the world. Not exaggerating. Not only is it home to bigwigs like Disney World and Universal Studios, but basically the entire city is a fun zone. Picture a Ferris Wheel thrown up in a random parking lot by the side of the highway, and you get the idea. First a disclaimer: I’d only recommend visiting Orlando if you actually plan to visit said theme parks, otherwise your time is better spent somewhere less…shall we say…seedy.

The aforementioned parks are the ones you’ll want to spend your time at, and I don’t need to waste your time explaining what either one is all about! I would say though that if you have young kids, a trip to Mickey’s place over at Disneyworld is your best bet. The Magic Kingdom is where you’ll find all those loveable Disney characters, and features parades, fireworks, rides and shows. Lovers of REAL animals would be wise to spend their time at Animal Kingdom which houses an astounding 1,700 animals—it’s basically Americas answer to an African safari. And if you’ve ever dreamed of a Round the World trip, a day at the Epcot Center might temporarily cure your wanderlust, thanks to films showcasing different cultures, and culinary offerings from 11 different countries.

Teens will likely get more of a thrill at Universal Studios, which features a crazy number of thrilling rides including roller coasters, water parks and 3D extravaganzas—all movie-themed (my faves are the Spider Man 3D ride, and the Incredible Hulk roller coaster!). There are also live shows and a number of restaurants to keep everyone in the family happy.

Both resorts offer packages that include park admission and accommodation, so this can be a good way to save money and the hassle of driving—and keeps you from having to track down your car in the massive parking lots at the end of the day! One other tip? Make sure you pick up Express passes for the rides, so you don’t spend half your day standing in line in the sweltering sun.

Getting there: Dozens of airlines from around the world fly into Miami (MIA), Orlando (MCO) and Fort Lauderdale (FLL). Fort Lauderdale also serves as a port for a number of cruise ships, so you can spend some time in the city before heading out to explore the Caribbean.

When to go: Winter falls between November and April, when the average temperature can drop down to about 15 degrees Celsius—not great for the beach. A better bet is to visit between May and October when the mercury can climb to 30 degrees (plus humidity!), but keep in mind that hurricane season runs June through November.

Must try: A mojito, and key lime pie. Seriously, you cannot get a better key lime pie anywhere else.