Where to sip, ski and stay in Rossland, BC 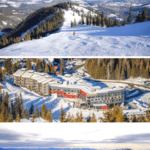 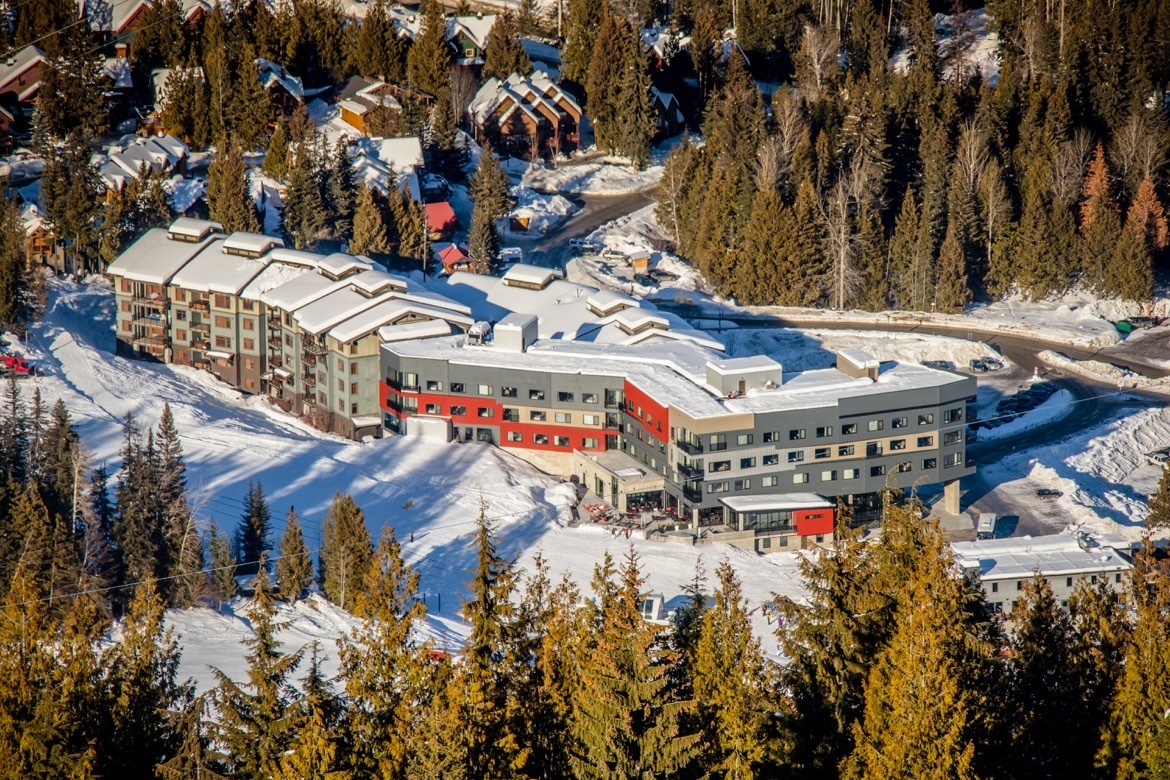 It’s not often one finds gastronomic dining, a world-class ski resort, and a glam hotel with luxe suites worthy of a Las Vegas penthouse all in one place–much less in a small, former mining town. And that’s exactly why the city of Rossland, B.C. in Canada just might be the best kept secret in the Kootenay Rockies, with a big payoff for those who make the trip to this unassuming, tucked away spot.

Nestled near the Monashee and Selkirk mountain ranges along British Columbia’s acclaimed Powder Highway, Rossland has achieved legend status among skiers and snowboarders eager to tackle the slopes up at RED Mountain Resort. Spread over three mountains, highlights include a cat-skiing operation, snow-covered cabins tucked into the woods, and plenty of hiking and biking trails to explore once the warm weather rolls through the valley. The city’s laid-back vibe attracts the type of people who come for a vacation and then choose to never go back home, who’ve fashioned the charming downtown strip into a hotbed of passion projects: think fabulous eateries, a boutique chocolatier, artist’s gallery and even a coffee roasterie. 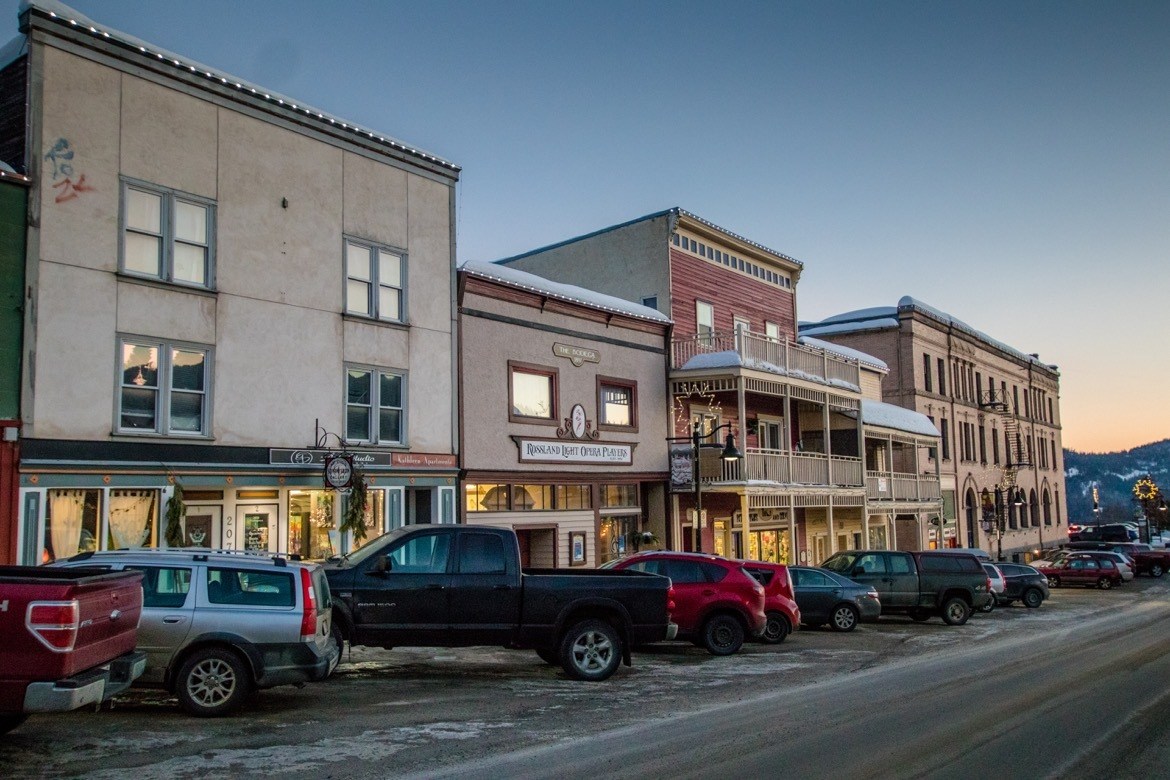 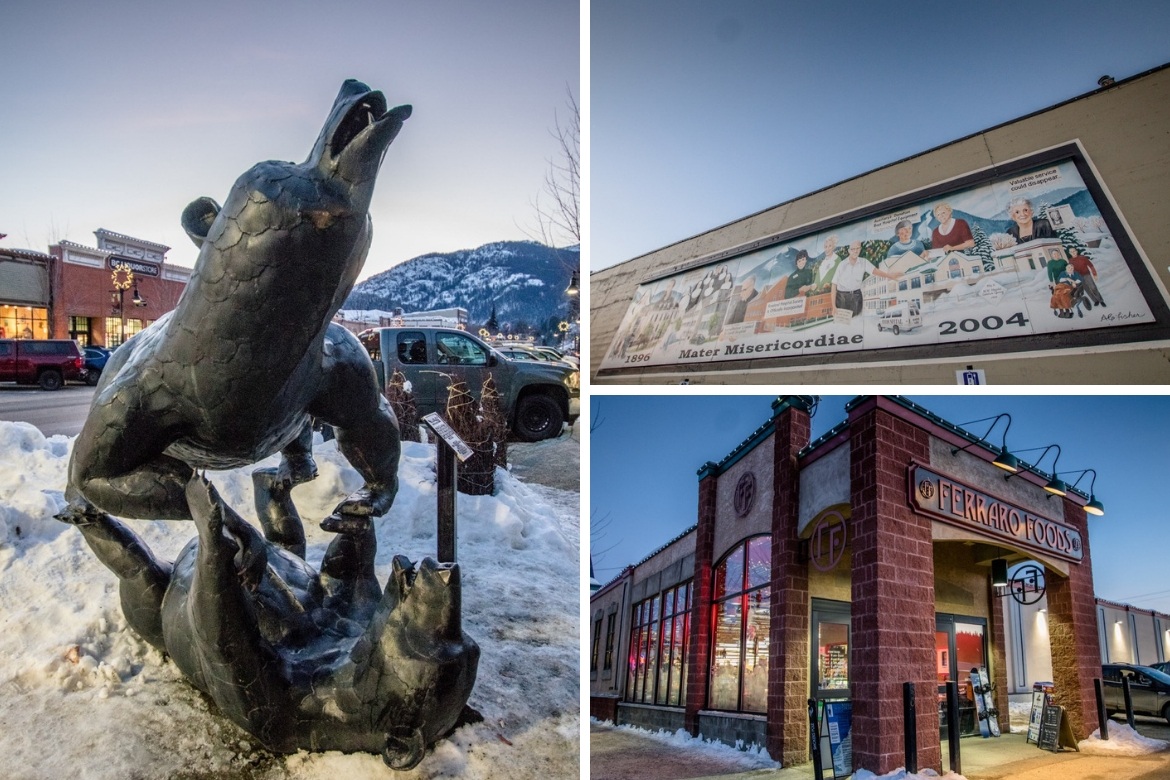 Of course, the flipside of Rossland’s off-the-beaten-path location means it can be a bit tough to travel to, being a seven hour drive from major cities like Vancouver and Calgary, or a nearly three hour drive from the Spokane airport including a border crossing. But the effort of getting to this alpine wonderland pays off in spades, the reward being great food, super friendly locals, and zero lineups at the chairlift even on the most epic powder days. From luxe stays to the best apres ski spots, here’s the ultimate guide to exploring Rossland, B.C.

Along with being one of the original ski resorts in western Canada dating back as far as the 1800s, RED Mountain also has bragging rights as home turf for Olympic skiing greats like Kerrin Lee-Gartner and Nancy Greene (who just so happens to have an entire nearby provincial park named after her), and playing host to Canada’s first ever World Cup event. 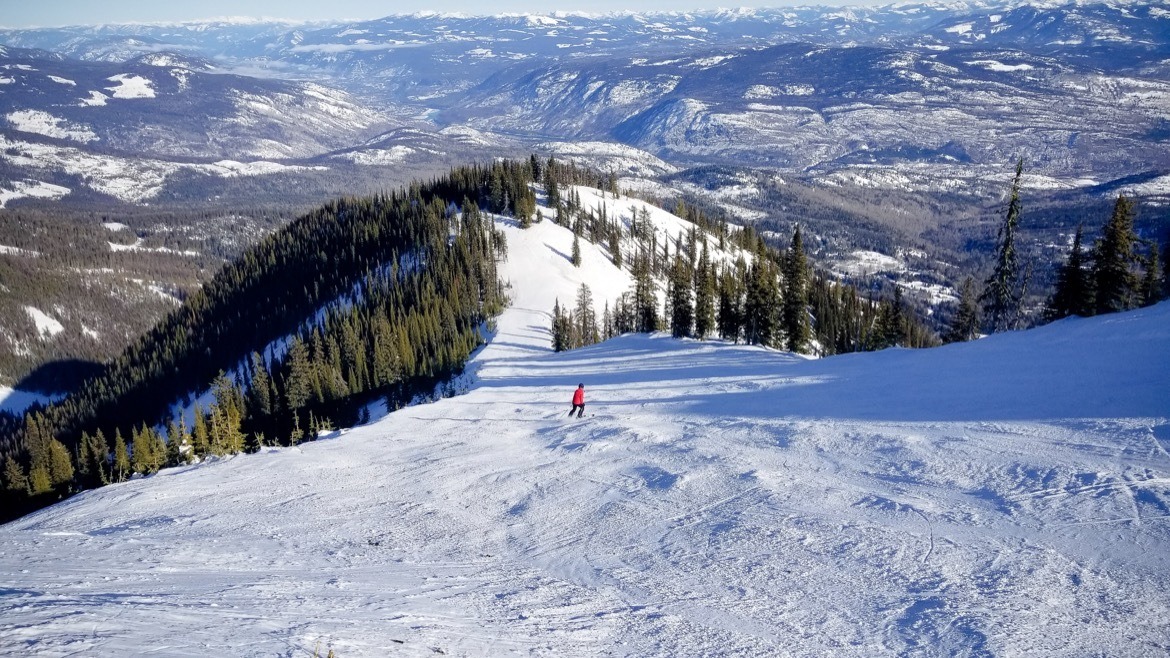 The hill has come a long way since the ‘60s when the first, single-seater chairlift was envisioned using the same mechanics found at the nearby mine. Today, skiers and snowboarders can tear down 4,200 acres of untouched terrain on over 100 runs which are named after songs and cocktails (think Southern Comfort, Ruby Tuesday), and try to spot the smattering of privately-owned cabins with clever monikers like ‘The Stagger-Inn’ tucked into the forest. With a vertical of nearly 3,000 feet the views of the surrounding mountain ranges seem endless, and fluffy white clouds hover over the granite peaks stretching as far as Idaho and Washington state. An inversion in the valley results in temperatures that are usually warmer than in the neighbouring Rockies, and even if it’s a cloudy day down at the base chances are you’ll enjoy a beautiful, bluebird day up top. 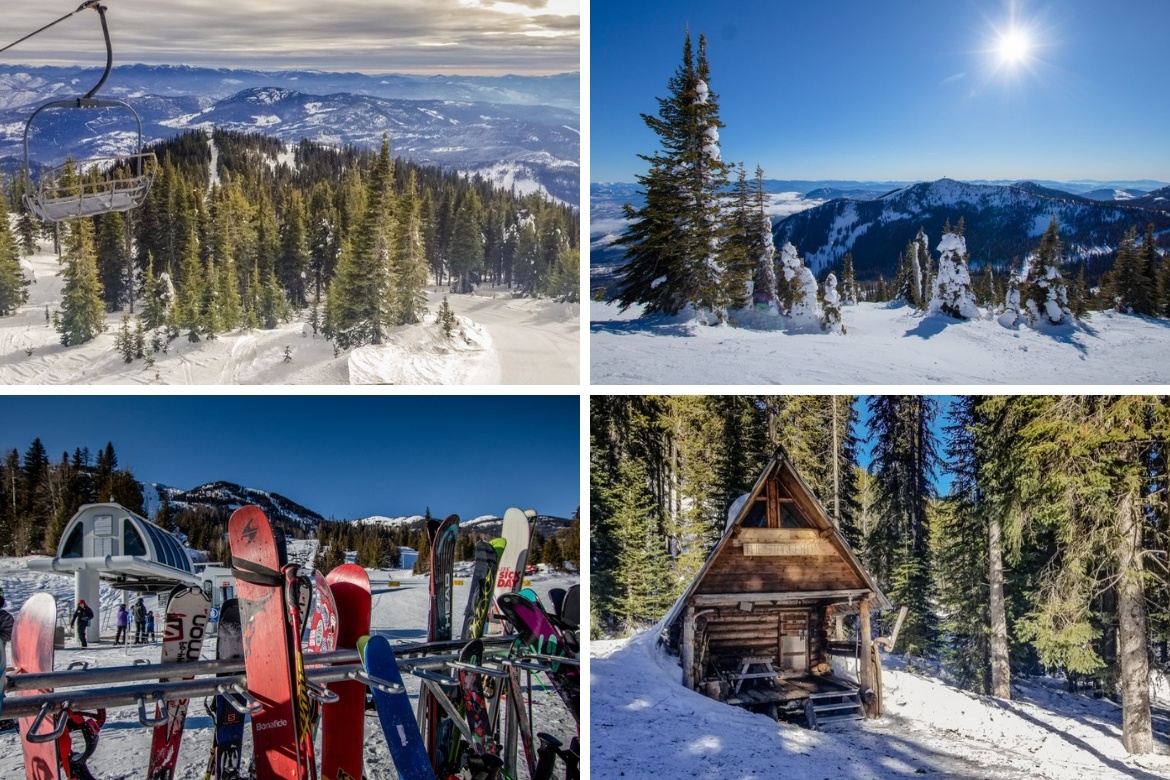 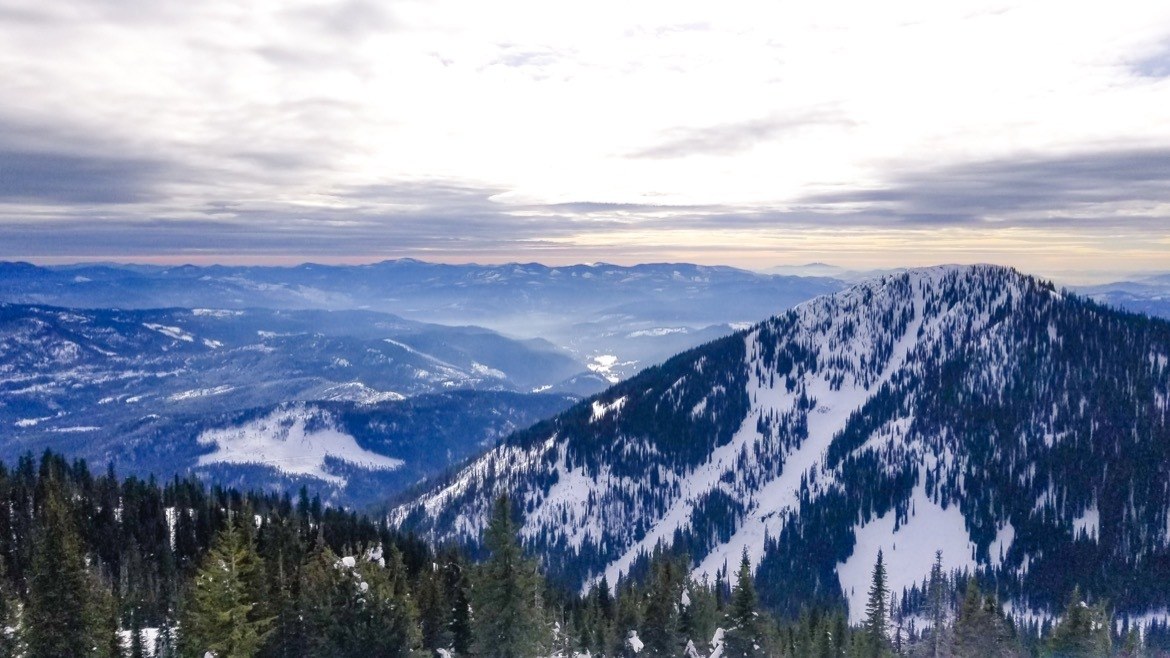 A lack of accessibility to the hill means RED Mountain only sees about 1,100 guests per day, or about three thousand during peak periods. By comparison, Whistler Blackcomb gets more than 6,000 per day, so it’s no wonder this hidden gem is beloved by powder hounds looking to enjoy a day on the slopes away from the crowds.

Top tip: Ever wanted to try cat-skiing? RED Mountain is the place to do it, on their Pisten Bully 200 snowcat that shuttles guests up Mt Kirkup for just $10 per ride, granting access to 200 acres of gladed tree skiing.

Stay at: The Josie Hotel

So long cookie-cutter, slopeside stays: The Josie Hotel in Rossland has totally changed the game when it comes to luxury ski-in/ski-out lodging. Located literally just steps away from the chairlifts on RED Mountain, this boutique property is so beautifully designed that one could be forgiven for forgetting they’re in BC’s Kootenays, and not some swanky, New York City skyline suite. 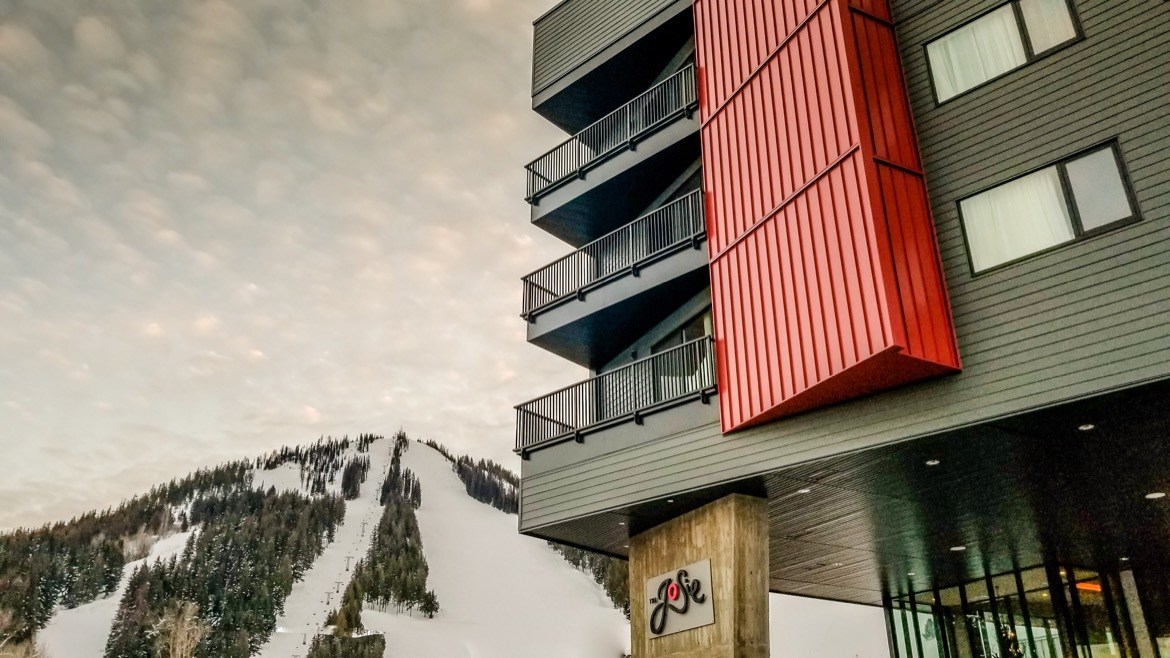 The Josie opened its doors in late 2018, unveiling an industrial, contemporary theme with sleek furnishings, luxe lighting and accents like a see-through gas fireplace, which blend seamlessly with cozy lodge-life touches like Jenga games and benches modelled from chairlifts suspended in the lobby–a nod to the ski hill in its backyard. 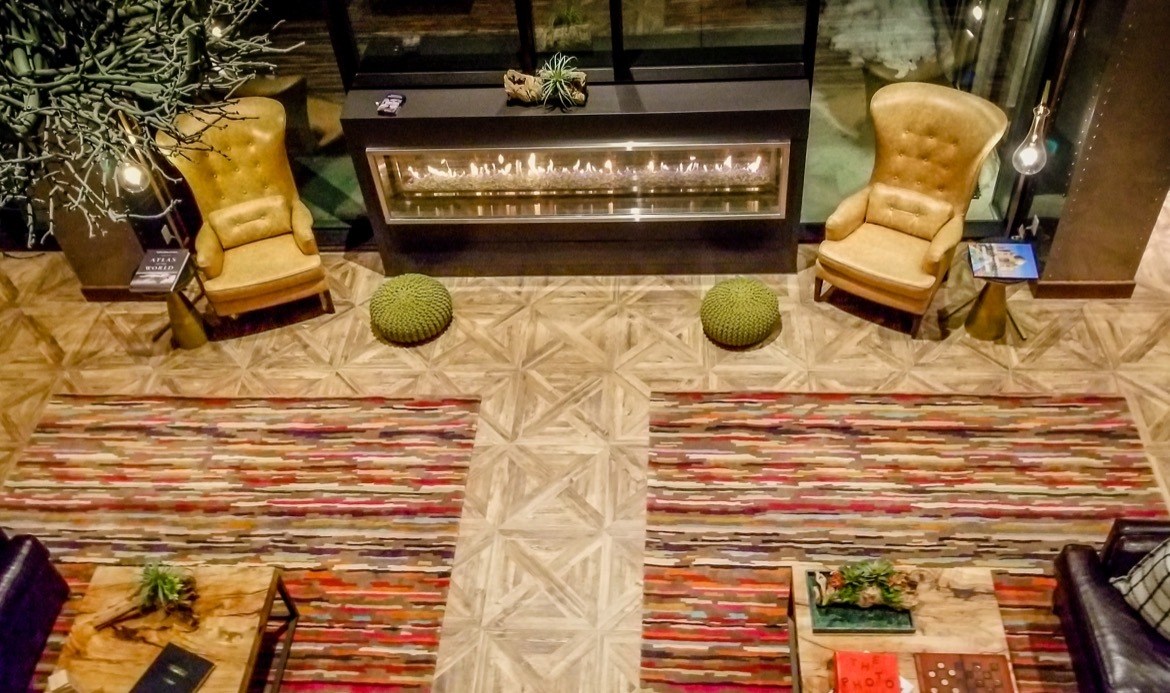 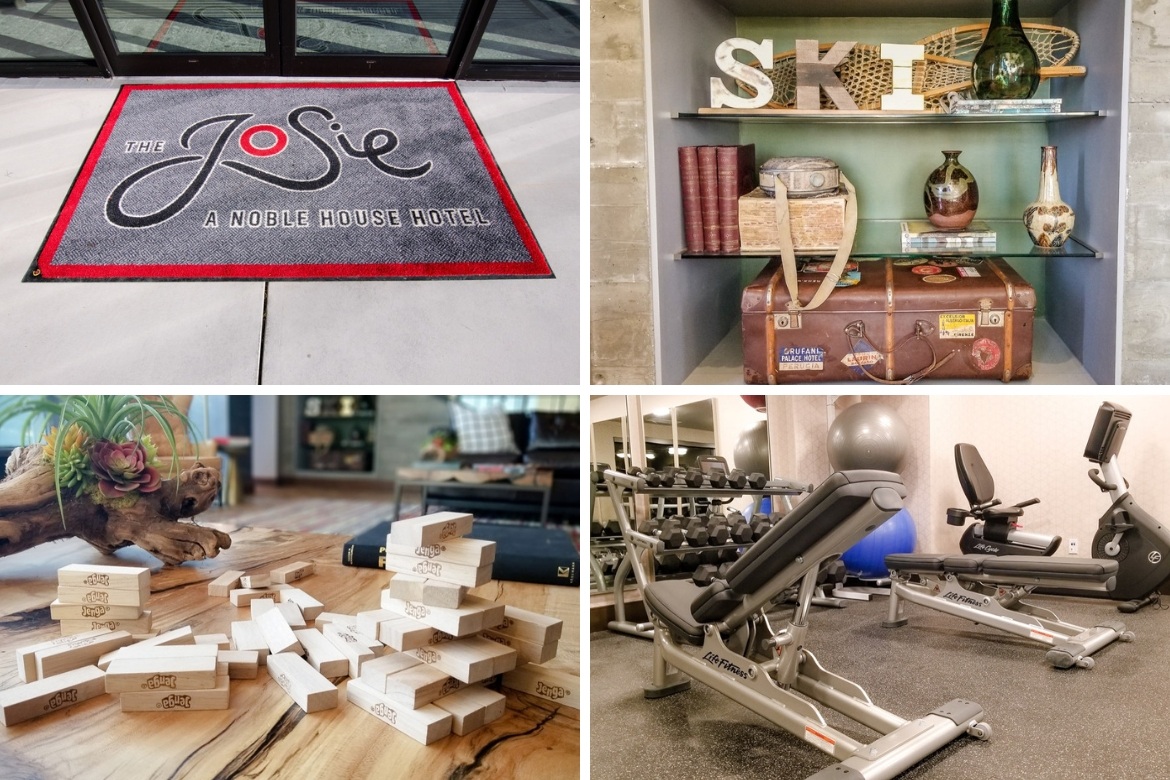 The stylish rooms and oversize suites all boast mountain views, including some with private balconies overlooking the chairlifts, outdoor patio and hot pools (which are expected to be finished in summer 2019). Tufted headboards, Barcelona chairs, gorgeous soaker tubs and oversize showers add to the swish vibe, the result being suites so stunning it’s hard to tear yourself away to head off to the hill. Click here to book 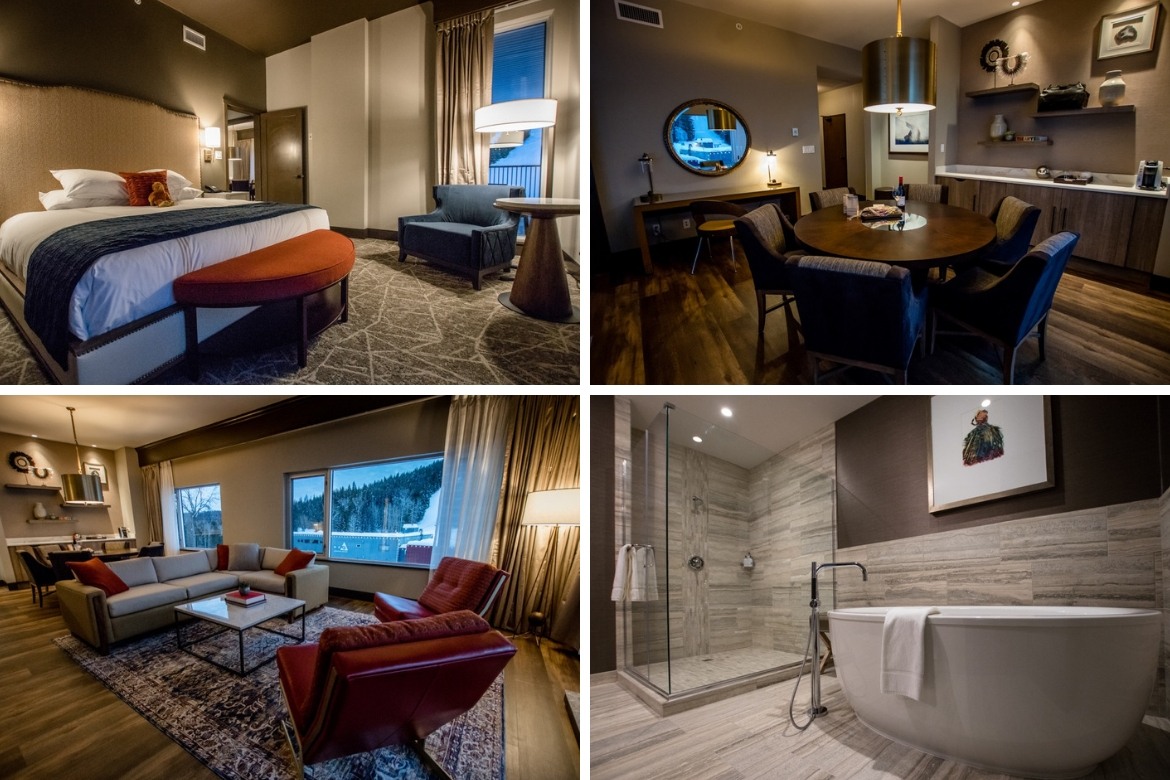 Guests who do get out can take advantage of the Josie’s Ski Concierge service, which sees staff store equipment, print off lift tickets, offer advice on conditions and which runs to tackle, and even carry gear out to the hill and back (not that it’s very far!), making for a five-star experience. Other on-site amenities include a spa, well-stocked gym and valet parking, and the property is also pet-friendly. 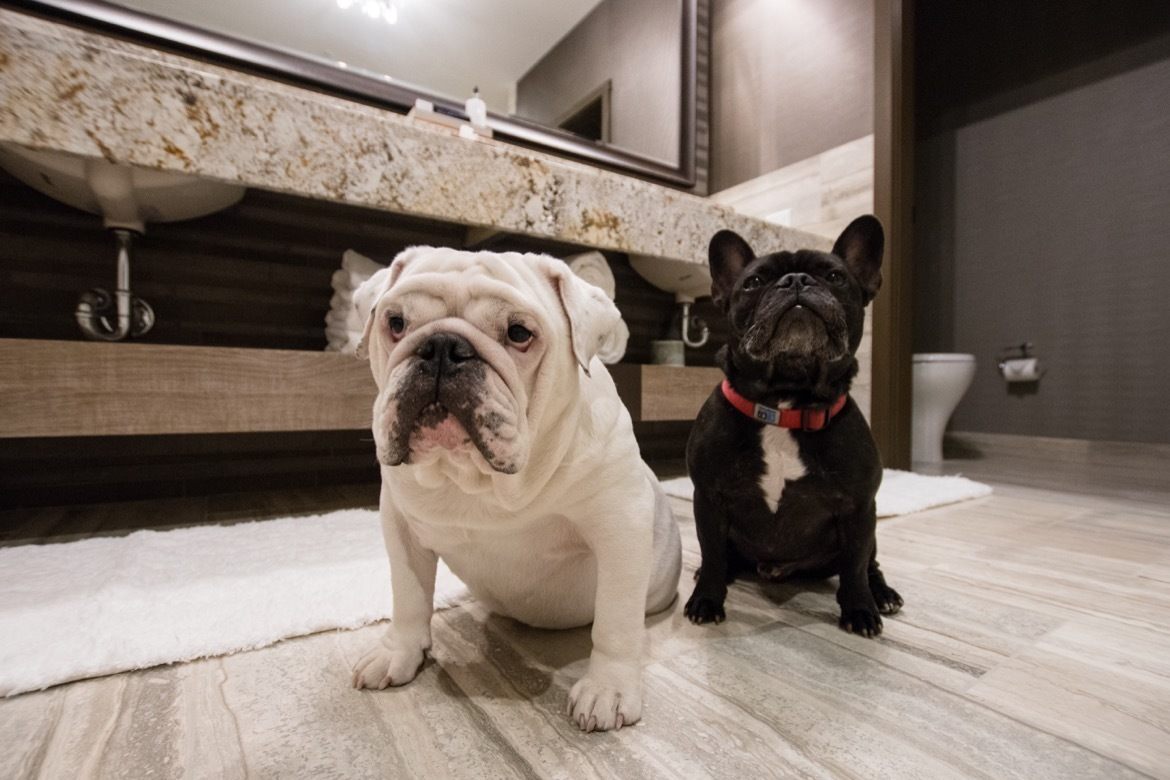 The Josie Hotel is pet friendly!

Along with being the most luxurious of all Rossland hotels, The Josie gets top marks for its in-house restaurant, The Velvet. Headed up by Vancouver transplant Chef Marc-André Choquette, this sleek spot serves up dishes like a maple & sake marinated sablefish, BBQ pork ribs so tender they fall right off the bone, and charcuterie boards with locally sourced cheeses and meat. Even breakfast is Instagram-worthy, where bites like the Kootenay Granola sprinkled with coconut, blueberries and pomegranate are served up so beautifully you won’t even want to take a bite. 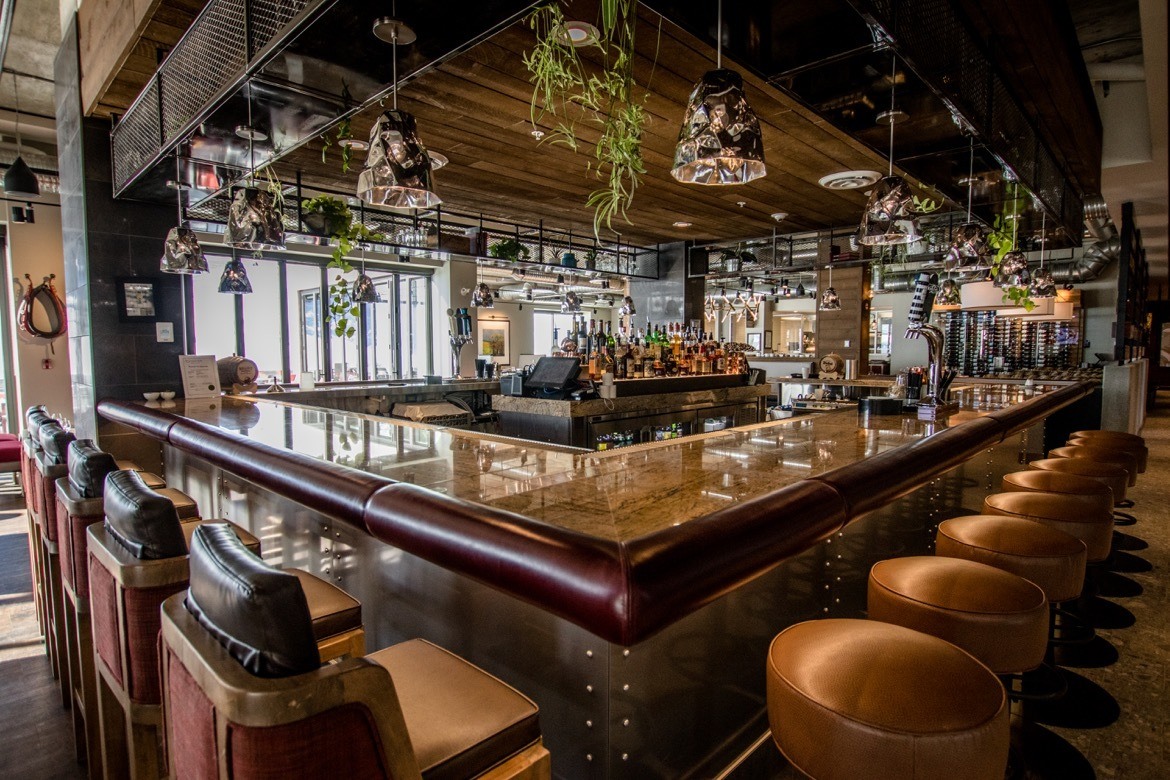 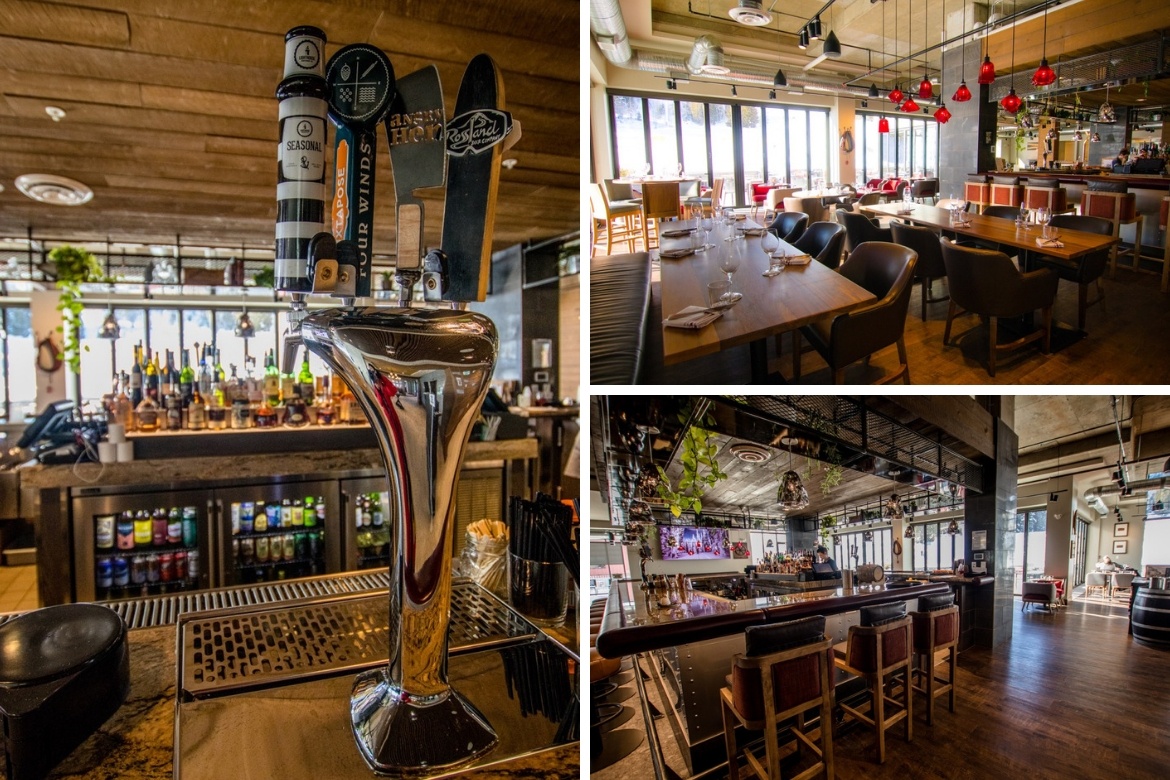 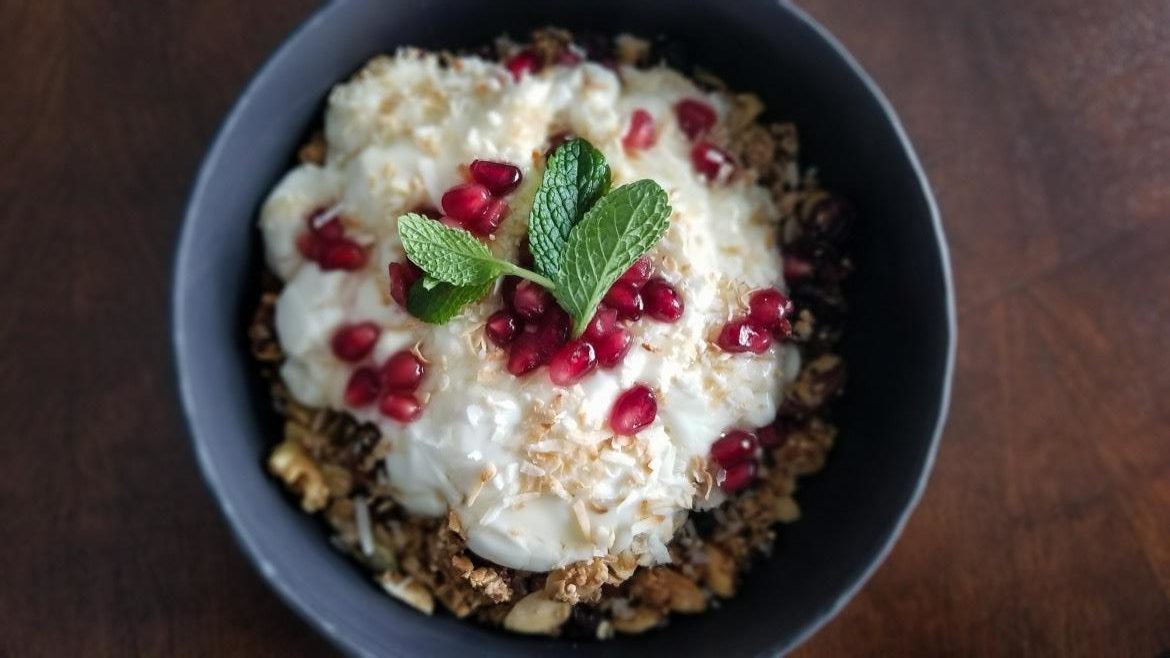 Other Rossland, BC lodging:

Slalom Creek: Groups favour this spot located right off the slopes, thanks to its variety of suites ranging from one to four bedrooms. Each one includes a modern kitchen, gas fireplace, and a private, outdoor hot tub perfect for soaking those aching muscles after a long day on the hill. On-site perks include a fitness centre, rec room with pool tables, ski storage and underground parking. Click here to book

Nowhere Special: Those on a budget will want to book space in this well-appointed hostel at the base of RED Mountain, which is only a two-minute walk from the chairlift. With room configurations suiting everyone from singles to families of four, and amenities including gear storage, a firepit, communal kitchen and hangout areas, Nowhere Special is perfect for those looking for a comfortable, no-frills getaway. Click here to book

Sip at: Rafters and The Flying Steamshovel Gastropub

When it comes to the best spot in town for après-ski, you don’t have to go far or even kick your boots off. The crowd favourite is Rafters, a lively hangout found on the top level of the day lodge at the base of RED Mountain, which was originally a compressor building for a mine in the 1800s. The entire building was moved to the hill in 1948 to serve as the base, and has managed to retain its charm and authenticity through the decades with original pieces like worn hardwood floors and timber rafters serving as the backdrop for happy hour. The cozy joint serves up food all day long, hosts live music and DJ sets in the evenings, and there’s even a separate area for families so kids can get in on the fun. 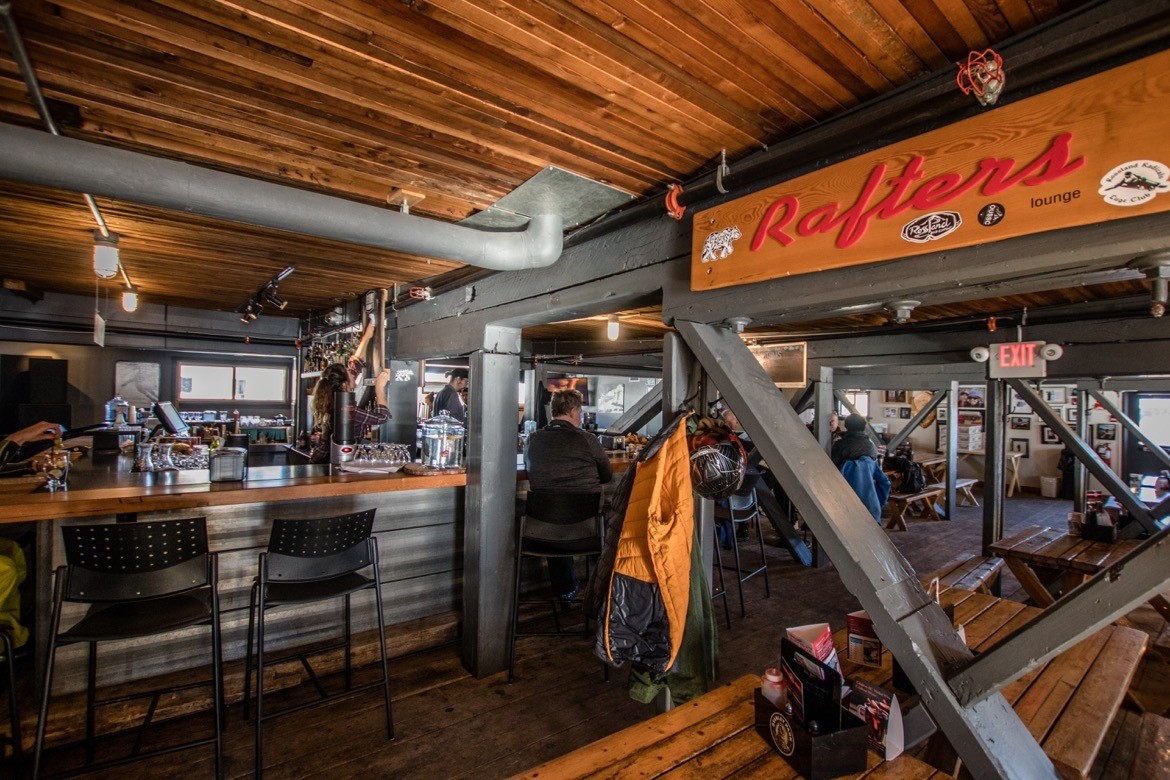 Those heading into town will want to stop in at The Flying Steamshovel, a gastropub beloved for its craft beer offerings, B.C. wine and hand-crafted cocktails alongside a fabulous menu (the tuna Poke Bowl is seriously life changing). Time a visit to catch one of their weekly shows, when Canadian and international artists hit the stage inside the intimate venue, making it the perfect night out in Rossland. 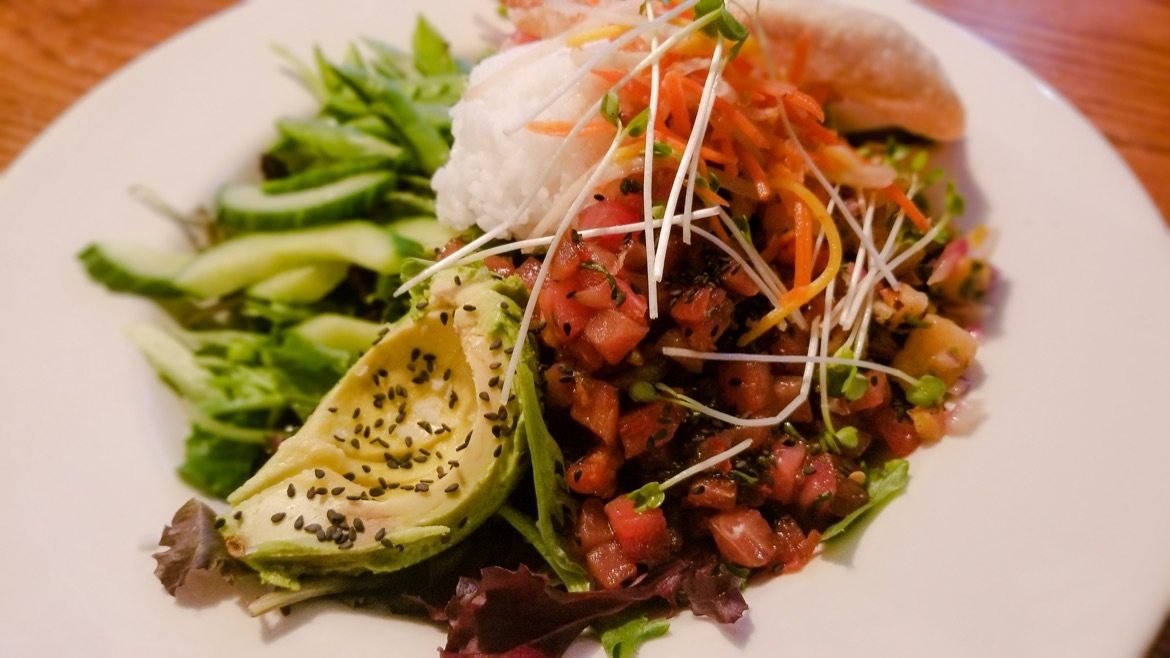 The Poke Bowl at The Flying Steamshovel Gastropub

Where is Rossland BC:

The easiest way to get to Rossland is by flying into the Spokane airport, then driving about two-and-a-half hours (RED Mountain is just 10 minutes from the U.S. border). There’s also an airport in nearby Castlegar, but flights are frequently cancelled due to weather conditions. Rossland is a seven hour drive from both Calgary and Vancouver.

Globe Guide explored Rossland as a guest of The Josie Hotel and RED Mountain Resort. As always, hosts have no editorial influence on articles.

Fun things to do in Revelstoke, British Columbia in winter 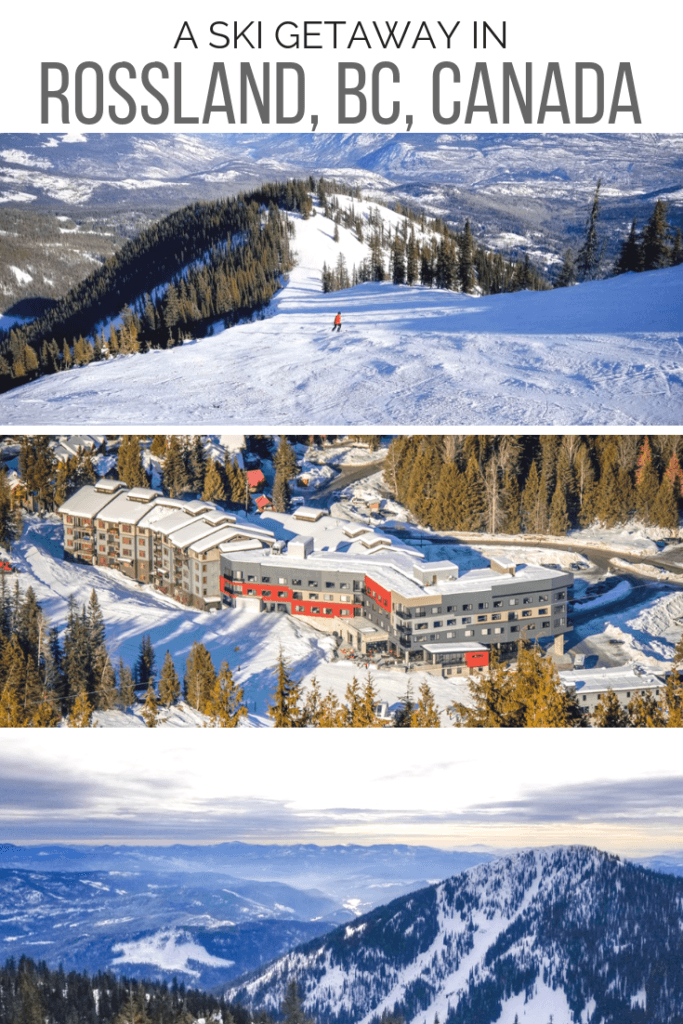 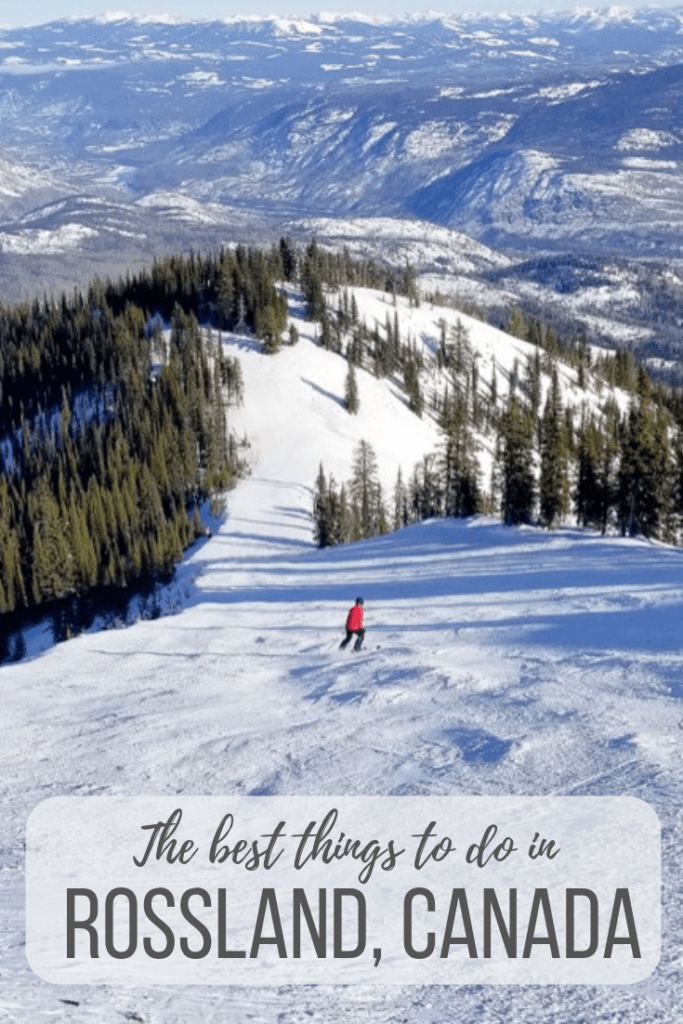 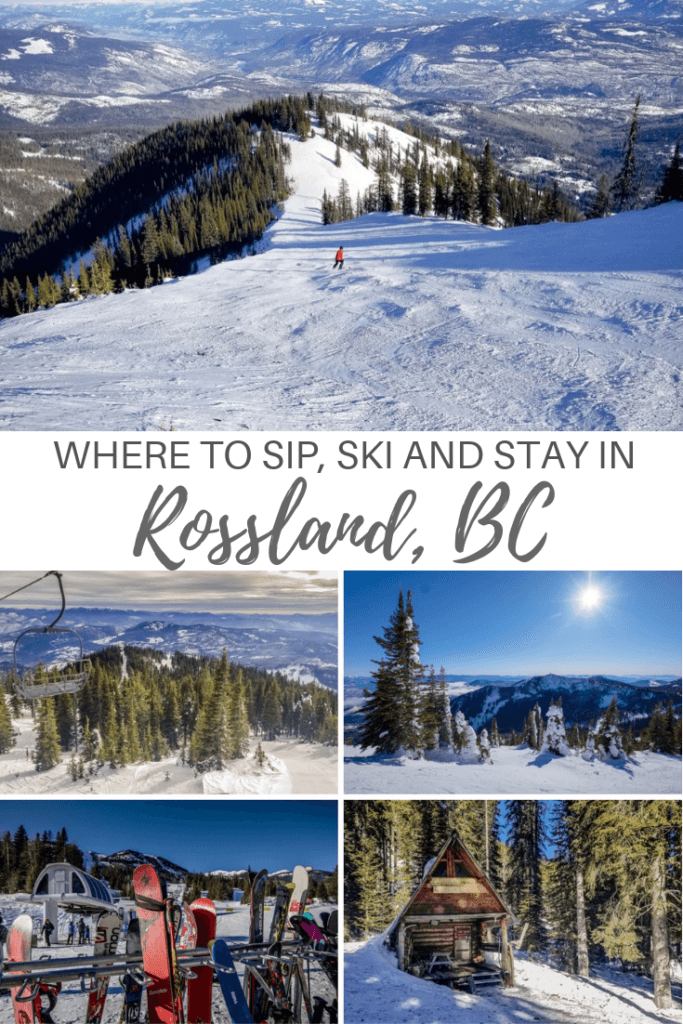