7 quirky, fun things to do in La Paz, Bolivia 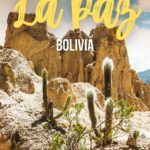 La Paz, Bolivia has been described as a city unlike any other, and at first glance it’s easy to see why. It basically defies logic, with hundreds of thousands of homes and buildings built into the side of the huge mountains right in the middle of the city. 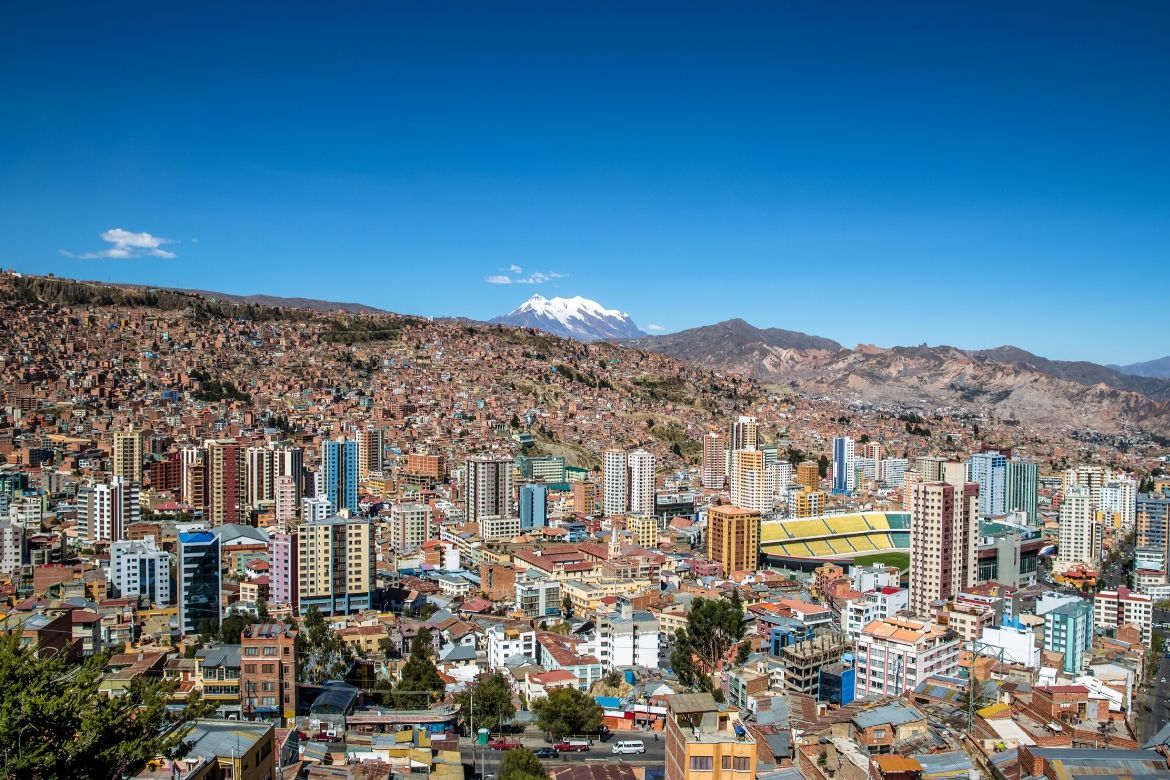 Its impressive panoramas and natural wonders are a dream to explore, and despite being a bustling metropolis the traditions that date back generations—such as the women’s colourful woven clothing—are alive and well.

Beyond the usual trademarks of a South American city like towering cathedrals, vibrant streetscapes and colonial architecture, there’s also a quirky side to this Andean city that makes it a fun stop worth including on your Bolivia itinerary.

From dancing zebras to wild wrestling matches, here are the most fun things to do in La Paz. 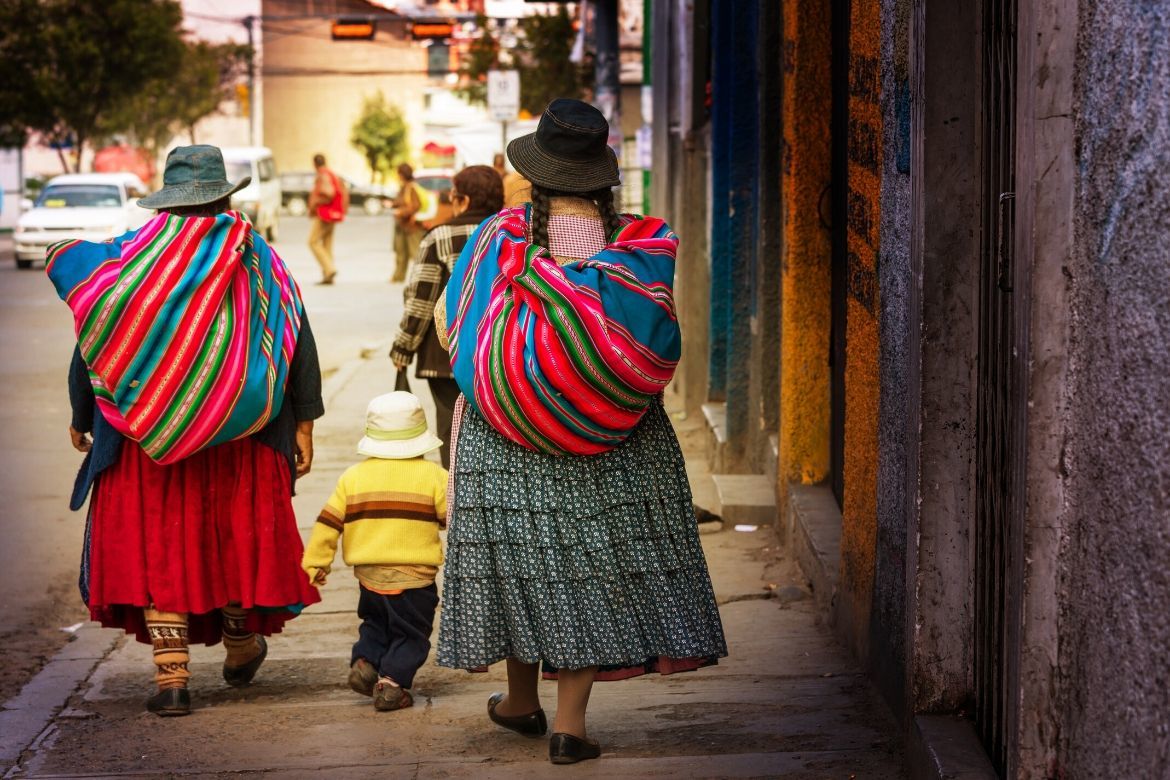 Walk through the Witches’ Market

Exploring the Witches’ Market (or Mercado de las Brujas) is one of the top things to do in La Paz, and one of the best known landmarks. Located a few blocks from the Rosario neighbourhood and up the hill from Plaza San Francisco, you’ll see rows and rows of tiny stalls packed together, with virtually all of them selling the same items. 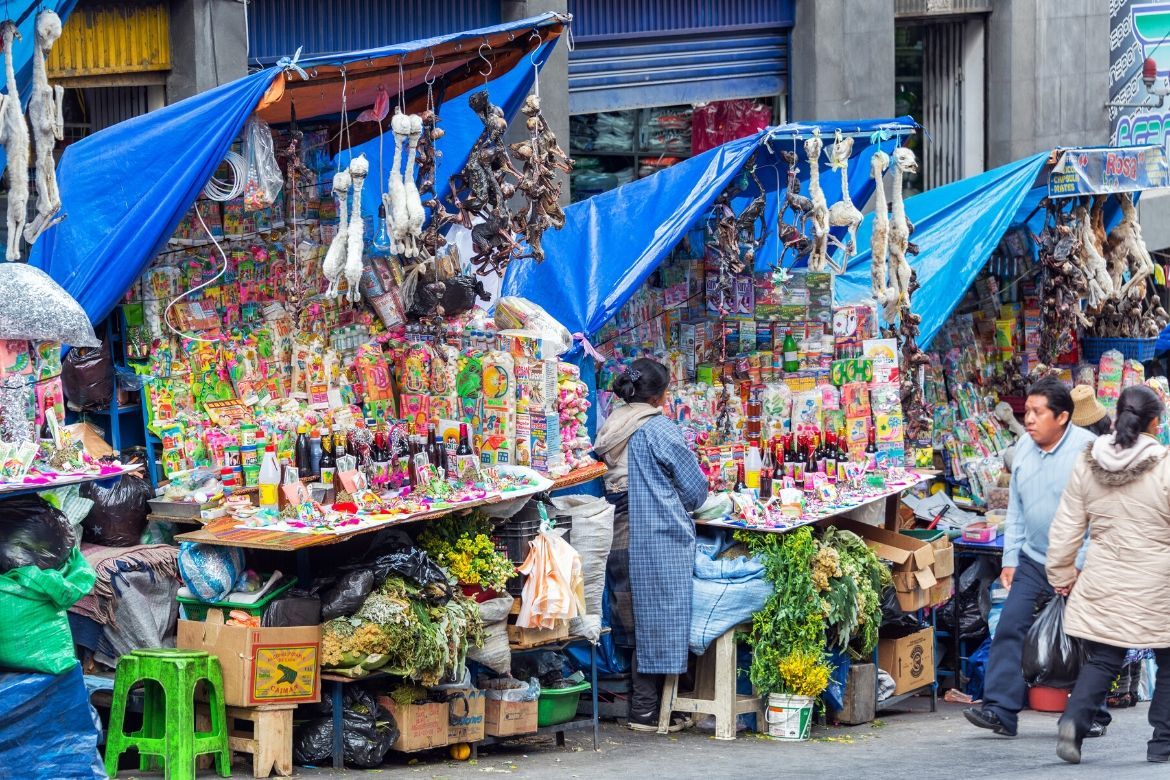 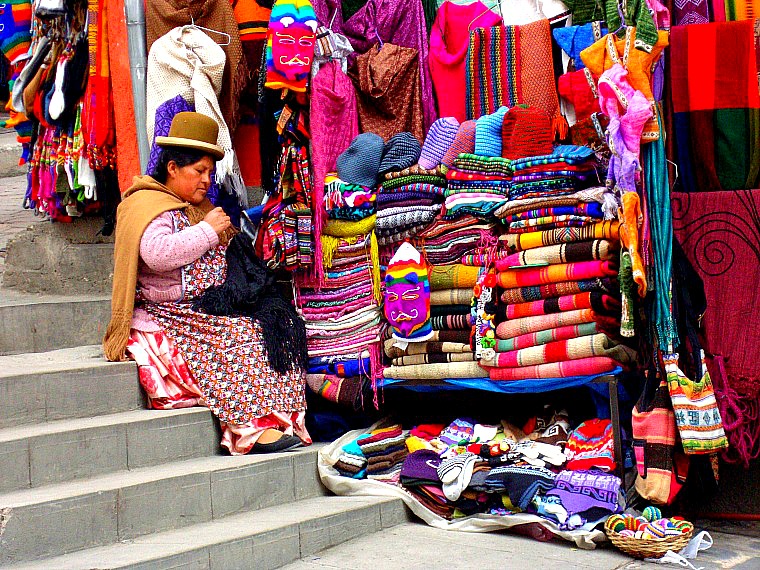 The first thing you’ll likely notice is all of the brightly coloured potions lining the shelves, offering to cure everything from headaches to infertility, or “cast a spell on your lover.” There’s a dazzling array to choose from, so if you’re looking for relief from say, food poisoning, it’s best to ask the witch for help. Of course, you don’t need to buy anything to visit the market, but it would sure make a great story to say you were cured by a real life witch!

Now for the part that animal lovers will hate: the dead baby llamas hanging from strings. 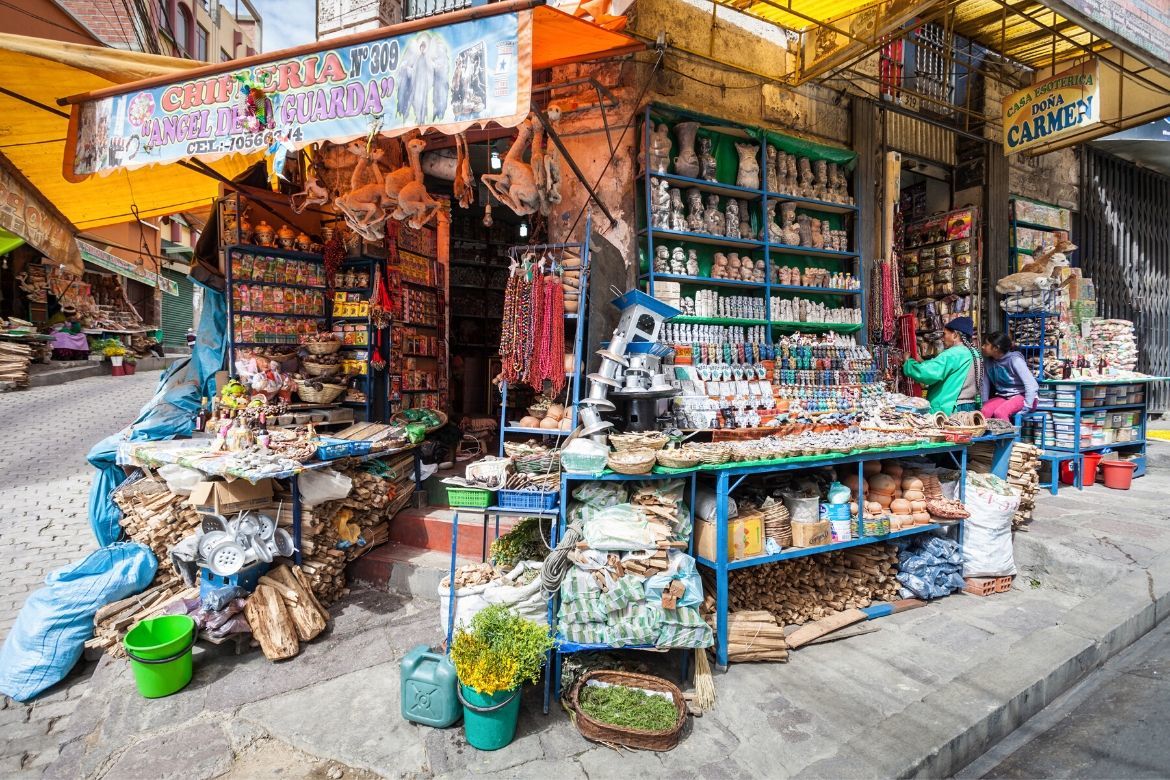 Many llama pregnancies end in miscarriages or still births, and in Bolivia llama fetuses are considered sacred. So, whenever someone buys a new home they bury a llama fetus under the foundation, which is thought to bring good luck and fortune. To be honest, the sight of all those dead baby animals is a bit off-putting, but now that you know the story behind it it’s not quite so bad…right? 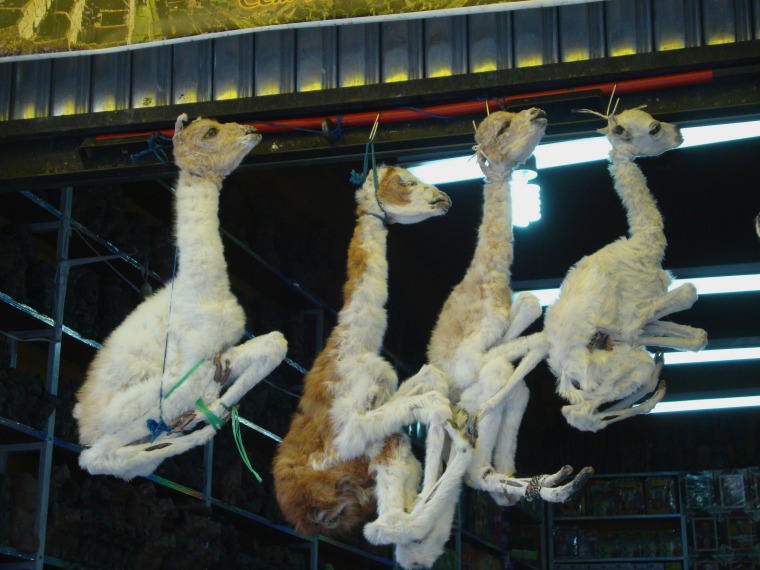 Hike through the Moon Valley

Far away from bustling downtown La Paz, the houses get bigger, the mountains are larger, and everything is a bit more lovely. The highlight of it all is Valle de la Luna, or the Moon Valley. 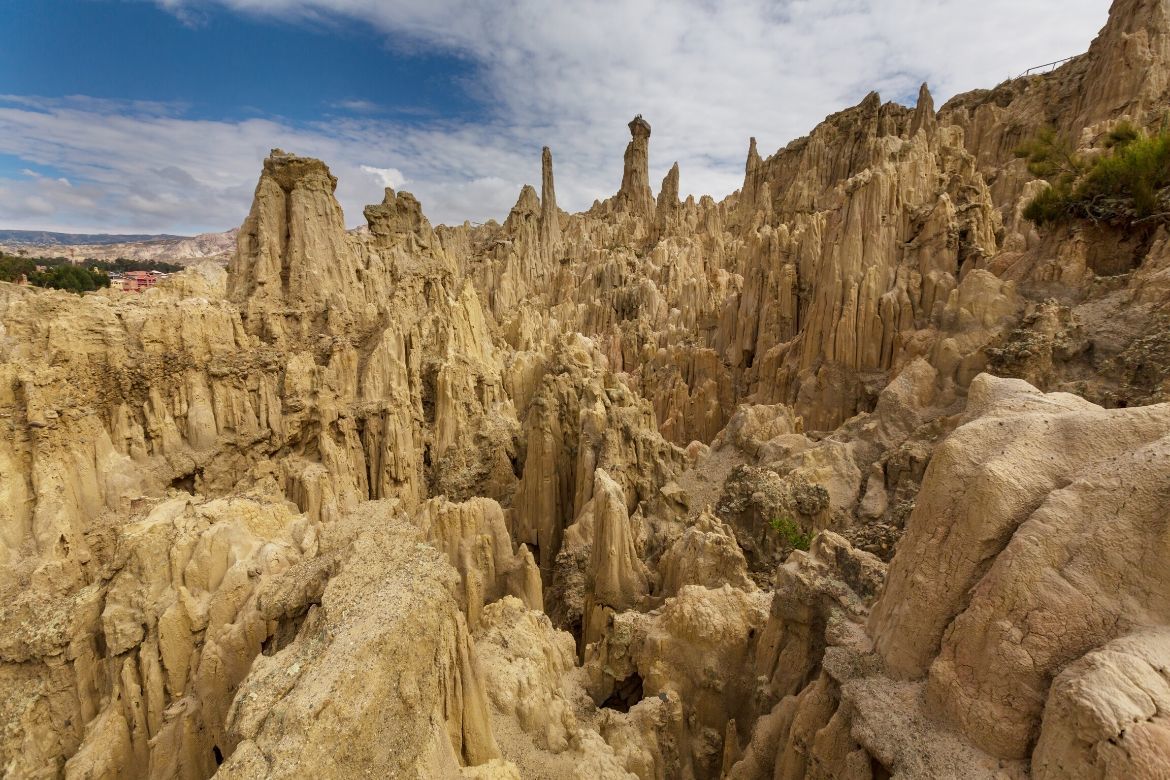 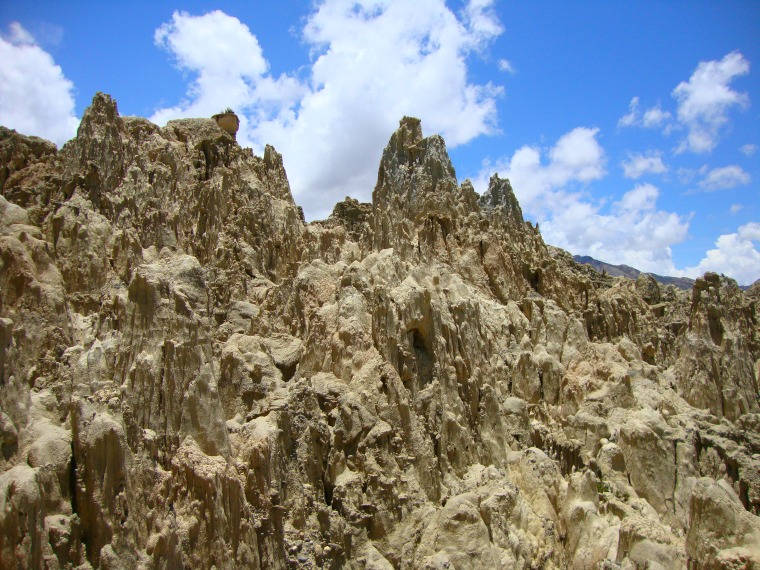 Moon Valley is a massive expanse of sandstone monoliths that were shaped into craggy, space-like mountains by the dry winds. It’s truly a bizarre, yet beautiful sight and a fantastic spot for photography. Inconspicuous staircases and trails have been carved out so visitors can walk through the site, but even the railings might not be enough to keep you from falling deep into a cavern if you happened to slip! 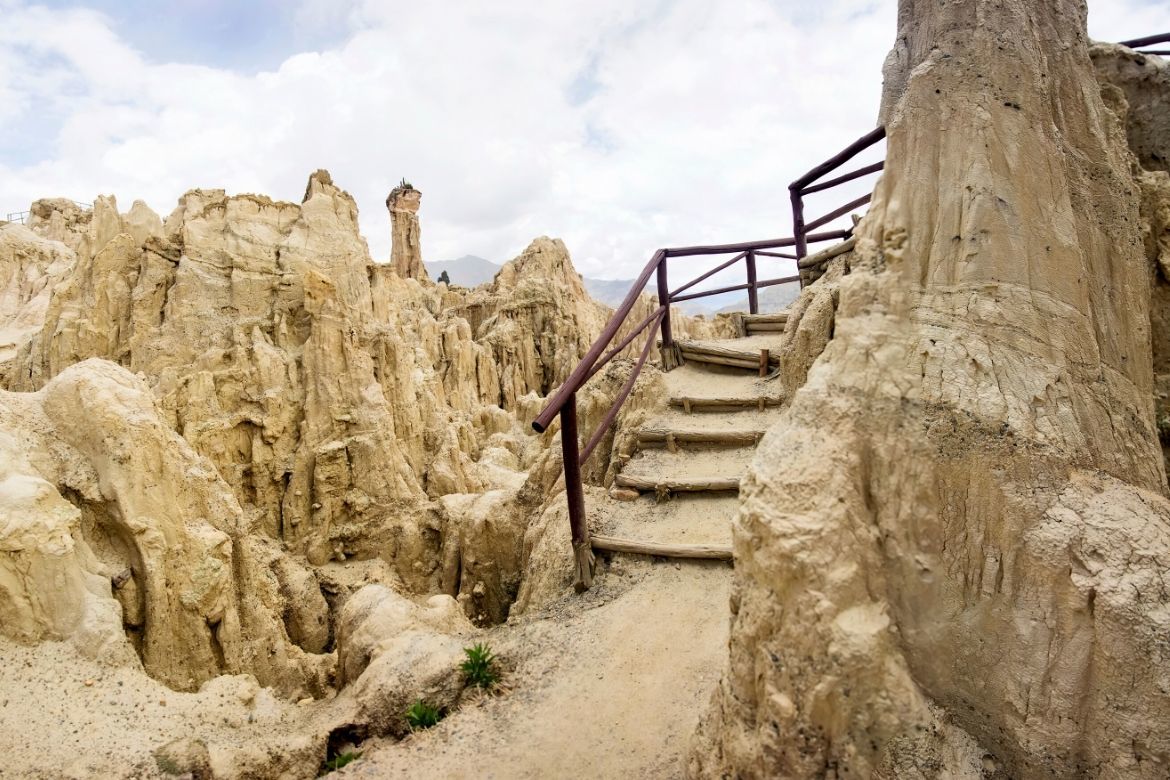 There are two paths through Moon Valley: one that takes about 20 minutes, and one that’s about 45. We opted for the 45 minute version, yet even though we stopped for pictures many, many times, we still finished the whole loop in less than half an hour. I would definitely recommend that route, as the ’20 minute’ version is way too short.

Also be sure to dress for warm weather, as Moon Valley is much hotter than downtown La Paz, even though it’s only about seven kilometers away. Admission is about $2 for tourists. 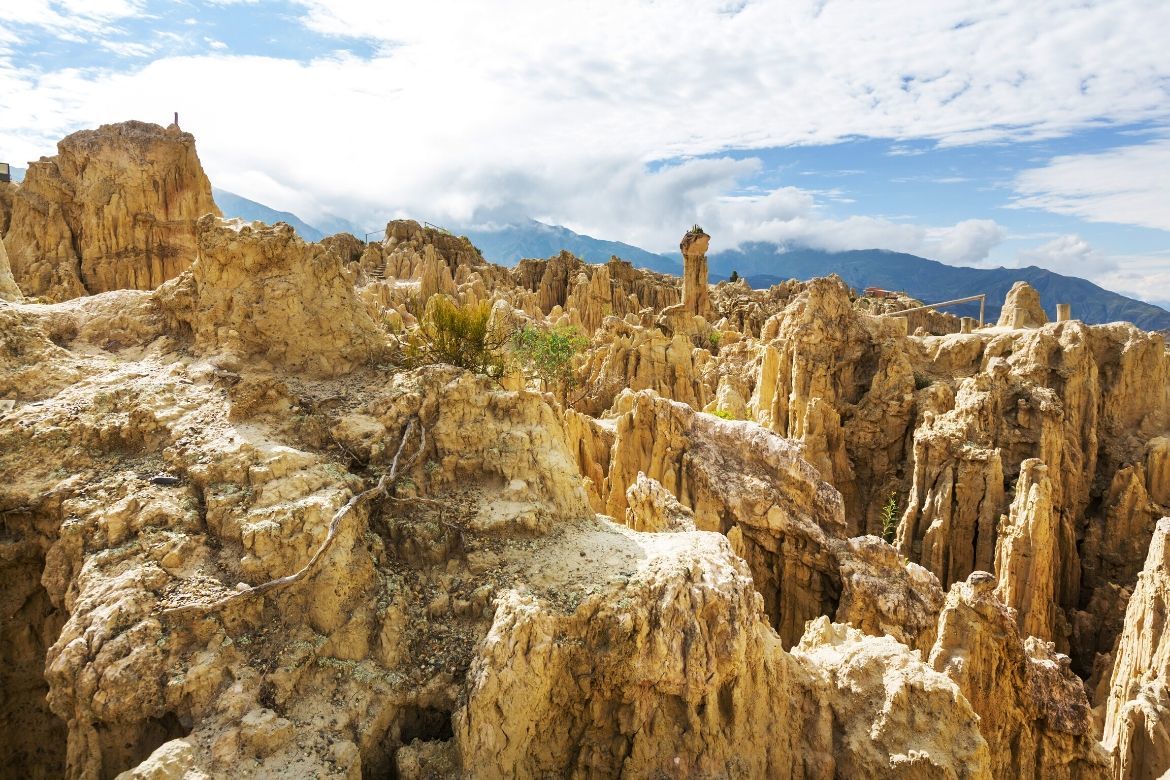 One of the most fun, unforgettable La Paz attractions are the dancing zebras–yes, you read that right!

Traffic can be loud, crazy and chaotic around here, which makes it particularly challenging for pedestrians trying to cross the street. So, the city came up with the traffic zebra program, which sees youths dress up in costume and head to the most congested intersections. Every time the light turns red, they jump in front of the cars to make sure they don’t run the light, then help pedestrians cross.

Not only are they cute to look at, but they’re also quite jovial, can often be seen dancing, and are more than happy to stop and pose for a picture.

The best way to get a full appreciation for the city’s rugged topography is to book a ride on Mi Teleferico. The cable car system is La Paz’s main mode of transportation, with colourful gondolas that link the city to El Alto and attractions like the Moon Valley. 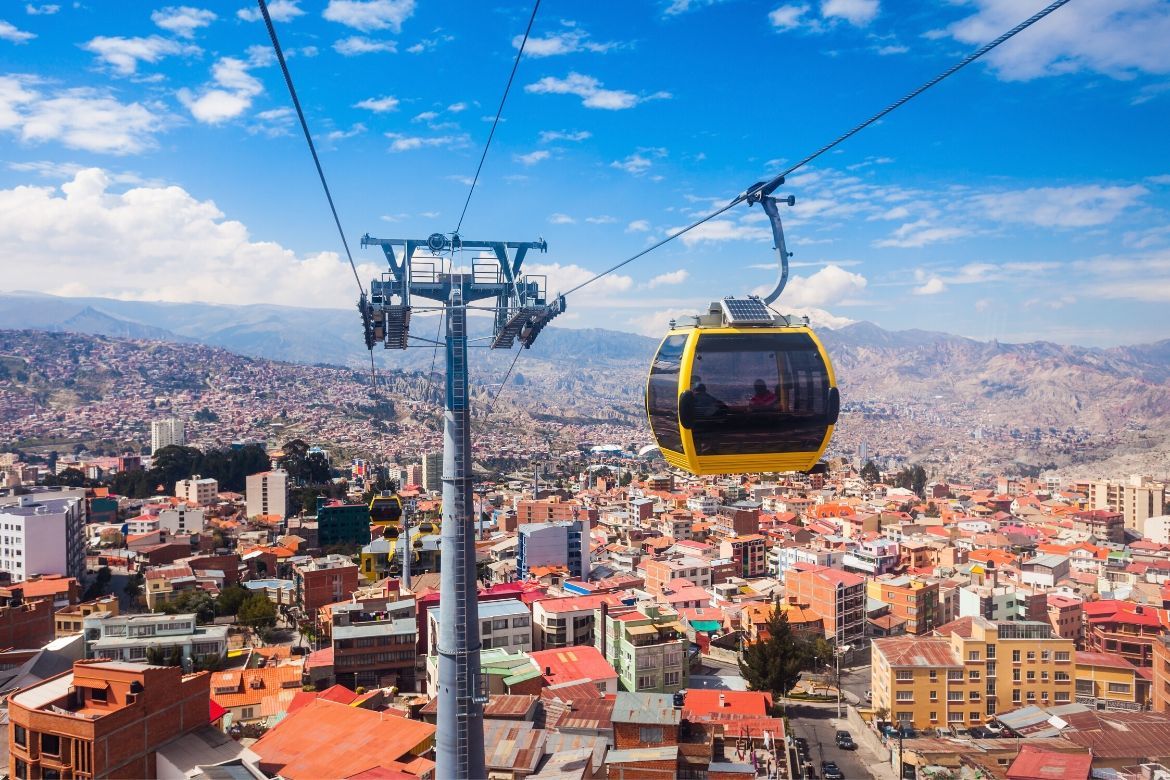 There are plenty of stops along each route so you could easily spend a fully day riding around; however, it might make more sense to book an organized tour like this one which also includes a city walking and food tour. Click here to book 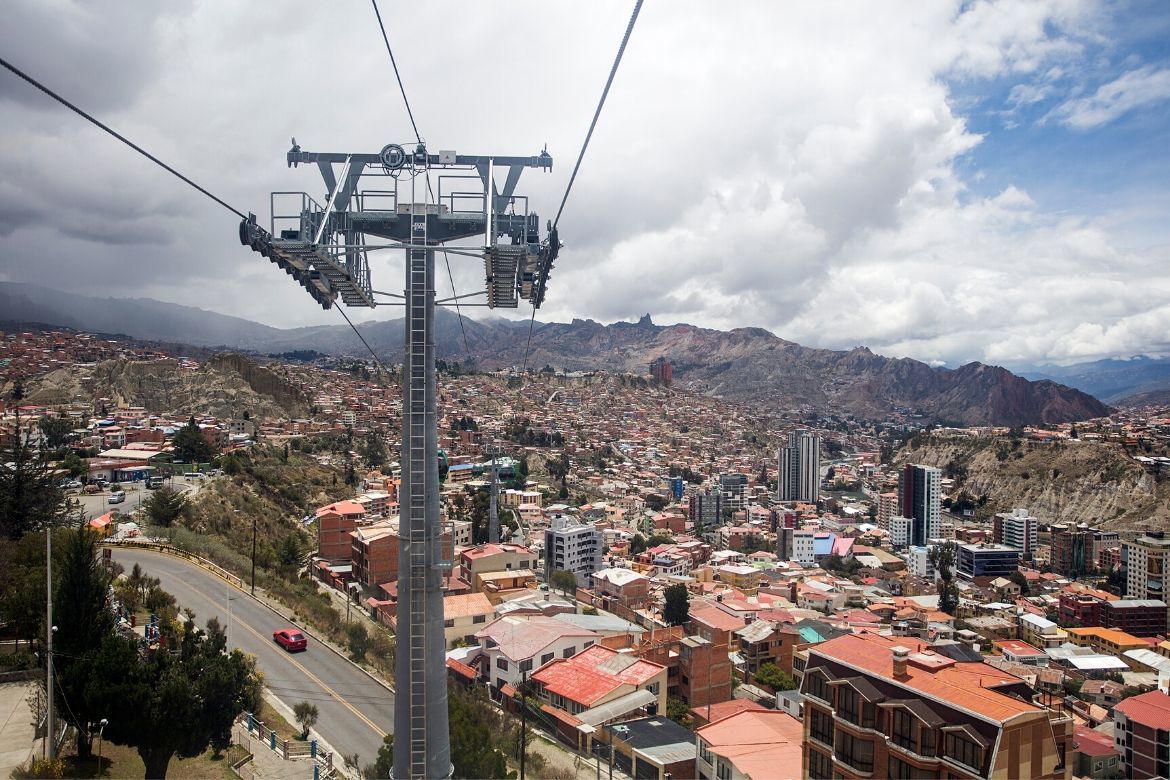 The heart of the city is Plaza San Francisco, which is anchored by the Basilica de San Francisco which was finished in the 18th century. Head inside to check out a museum, the catacombs, and head up to the bell tower for incredible views of the historic centre. 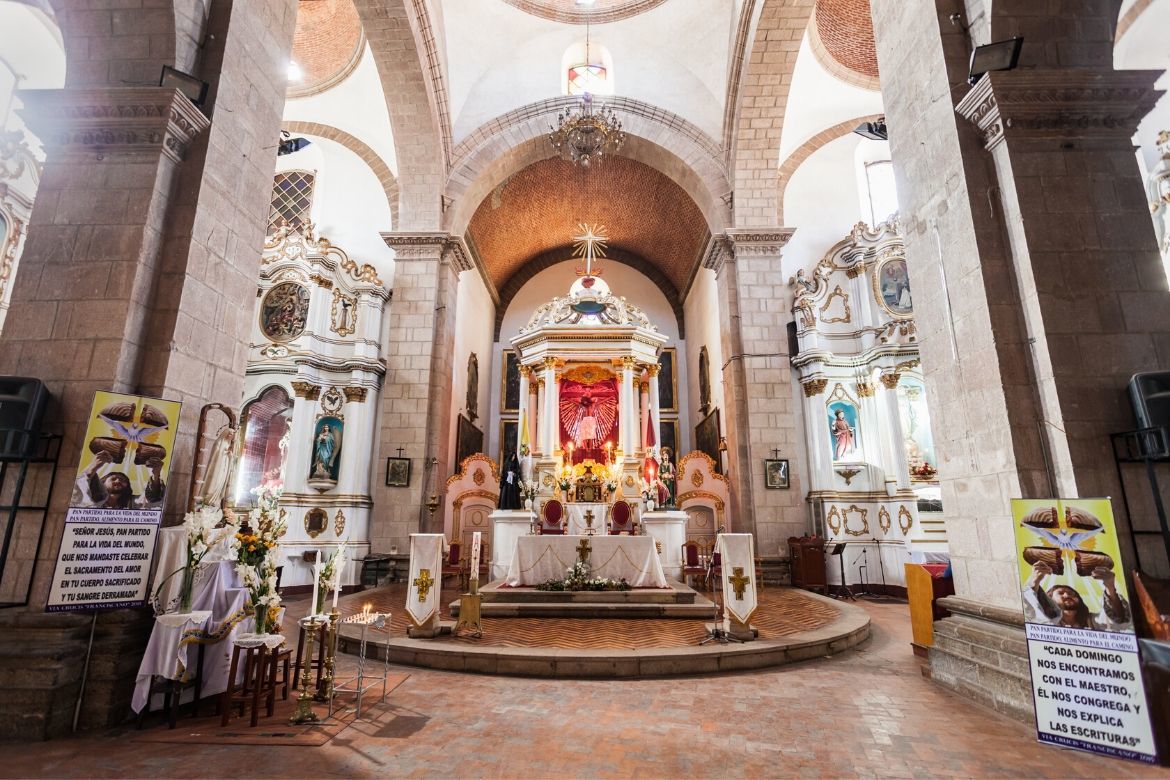 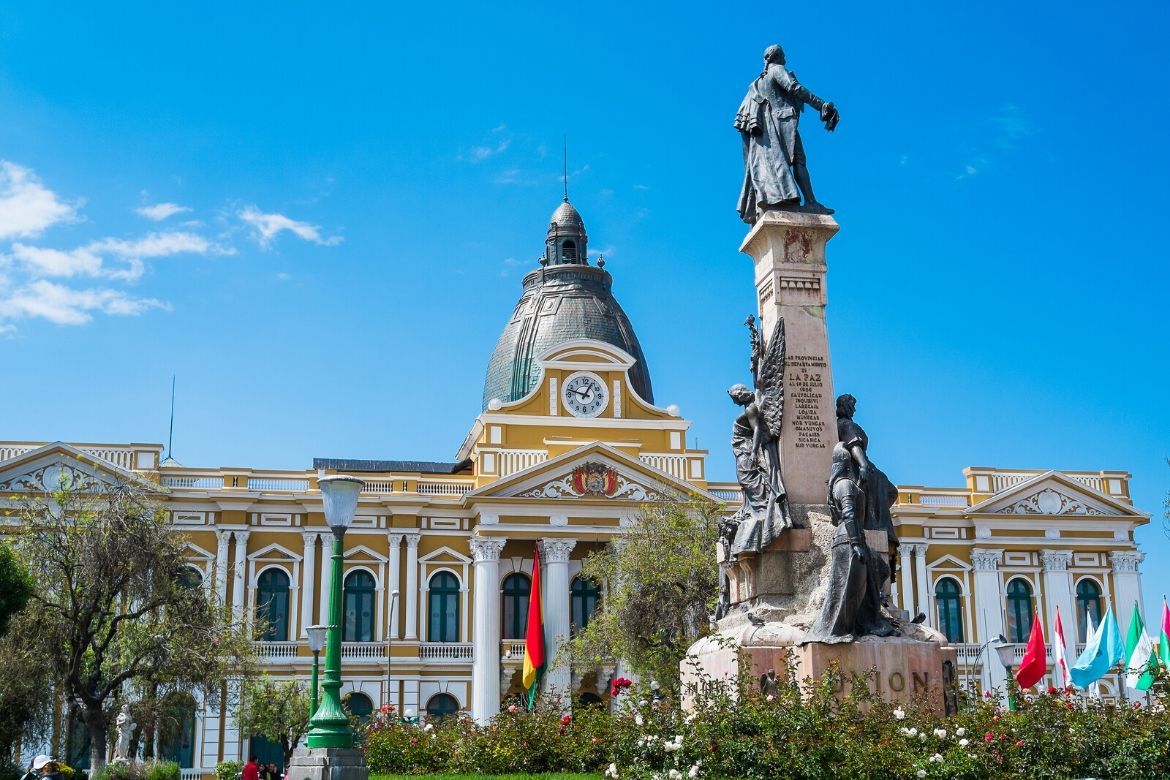 Nearby Plaza Murillo is home to several of Bolivia’s government branches (and pigeons!), including the vibrant presidential palace (Palacio Quemado). Be sure to take a close look at the “Clock of the South” on the neighbouring legislative building, which actually ticks backwards–yet another example of quirky things to see in La Paz. 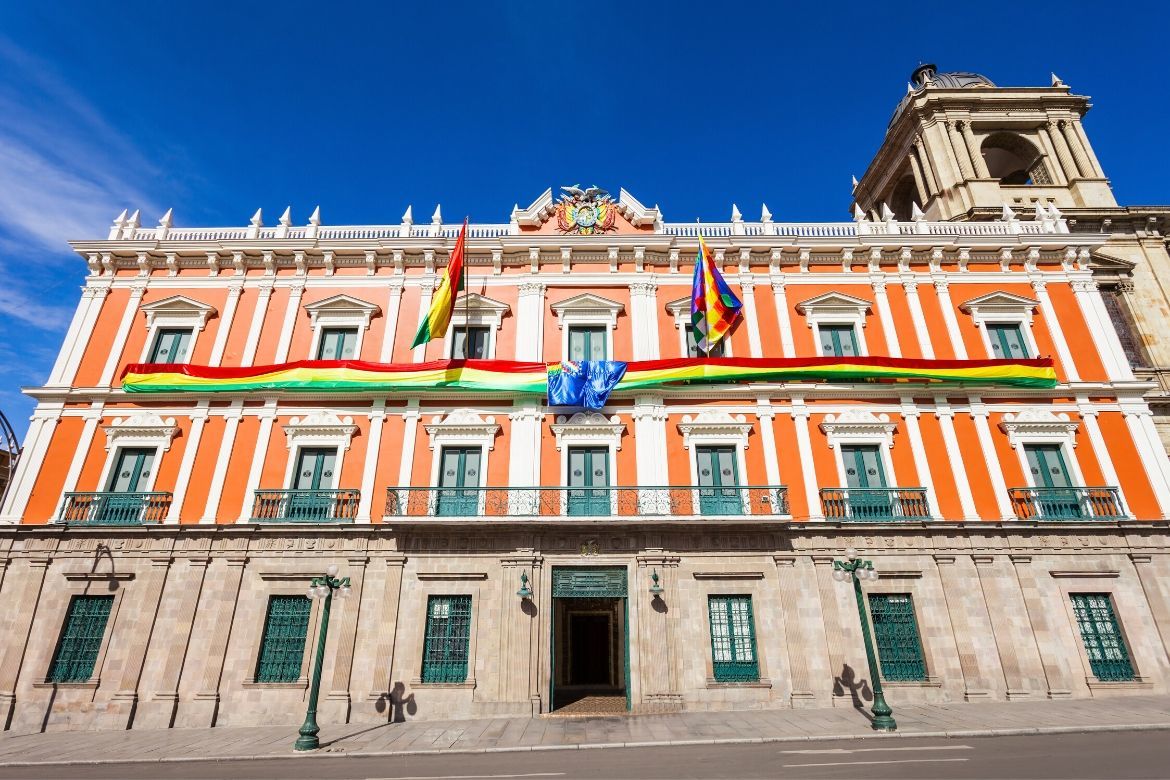 An interesting stop is the Museo de la Coca, a small museum detailing the history and use of coca leaves…and cocaine. The exhibits detail the plant’s importance in Andean culture, and there are also coca products such as liquors and chocolates for sale. 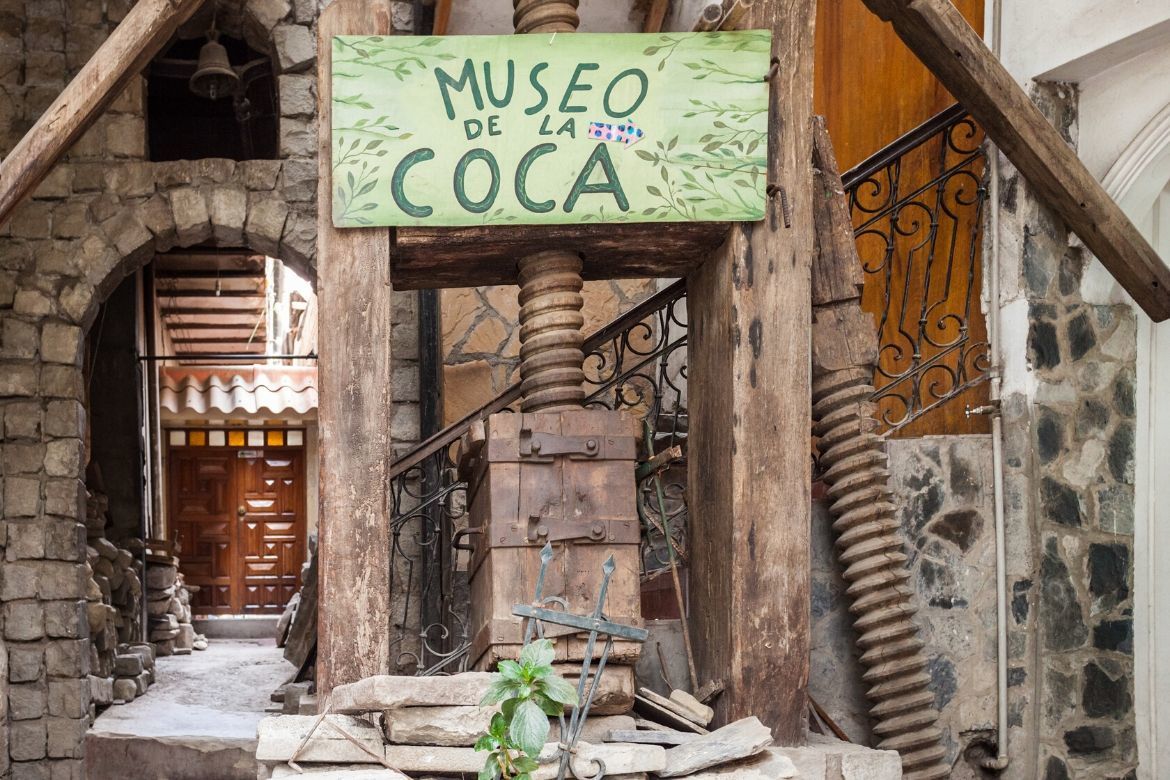 Bike down one of the world’s most dangerous roads

Daredevils will want to book this extreme day trip from La Paz, where riders cycle down a 64 kilometre stretch of road that drops more than 3,500 metres. The infamous highway is technically called the North Yungas Road, but it’s best known by its nickname, Death Road because about 300 people died here each year before a better road was built in 2006.

Located 90 minutes northeast of the city in La Cumbre, the ride starts at 4,700 metres above sea level and starts on a paved section of road with gorgeous mountain views. The route continues through a cloud forest, and past waterfalls, tiny villages, valleys and a thick jungle which is the hardest part of the ride due to the incredibly narrow road precariously carved into the side of a mountain.

The road ends in Yolosa, where there’s a lodge for relaxing in hot pools and soaking tired muscles before heading back to La Paz. before ending at a lodge in Yolosa.

Cheer at a Cholitas wrestling show

Sorry UFC: when it comes to entertainment value, the Cholitas wrestling show is the true champ. Holding the title as one of the most zany La Paz tourist attractions, the weekly show sees women dressed in traditional Bolivian clothing hit the ring for a showdown, complete with body slams and acrobatic moves. The outrageous, fun-filled show also includes plenty of audience participation, even kisses!

Wrestling matches are held on Thursdays and Sundays at the Multifuncional Ceja de el Alto, and tickets cost about $12 per person including transfers. Click here to book

Currency: Bolivianos (BOB), but USD is accepted in some places.

Getting there: La Paz is Bolivia’s hub, and a popular way to get there is to fly into El Alto International Airport, which is located just outside the city. Be wary though, as El Alto itself is a tad dodgy, so you’ll likely want to head straight into the city after landing.

Getting around: Taxis are very cheap, and you’d be wise to simply hire one to get around instead of trying to brave public transit. Keep in mind there can be some safety issues, so it might be better to get your hotel to call one for you.

Where to stay in La Paz Bolivia 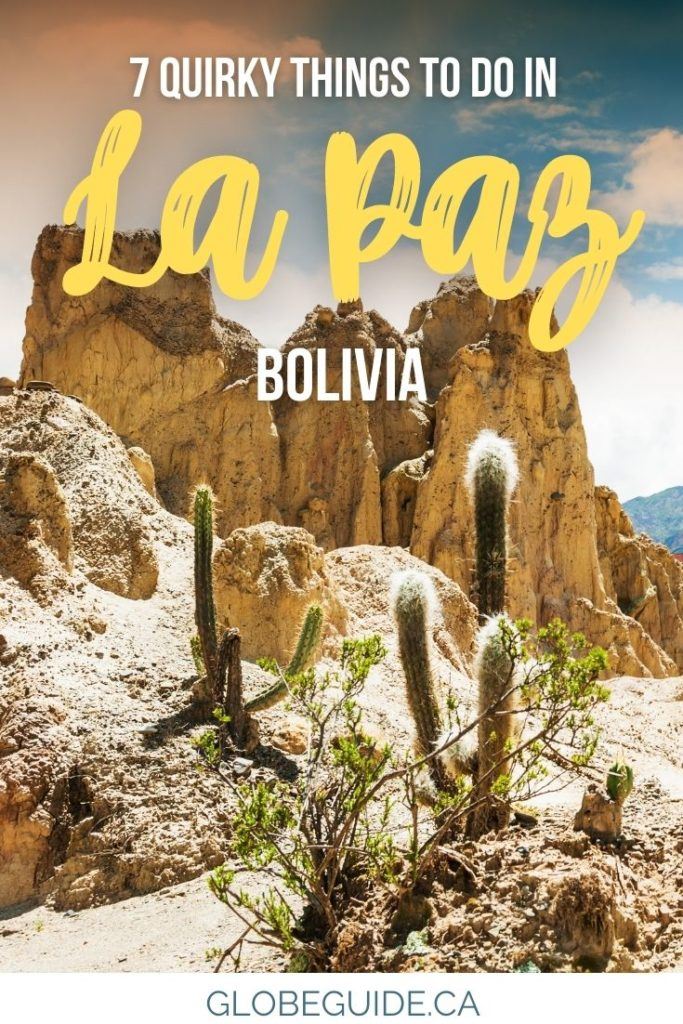 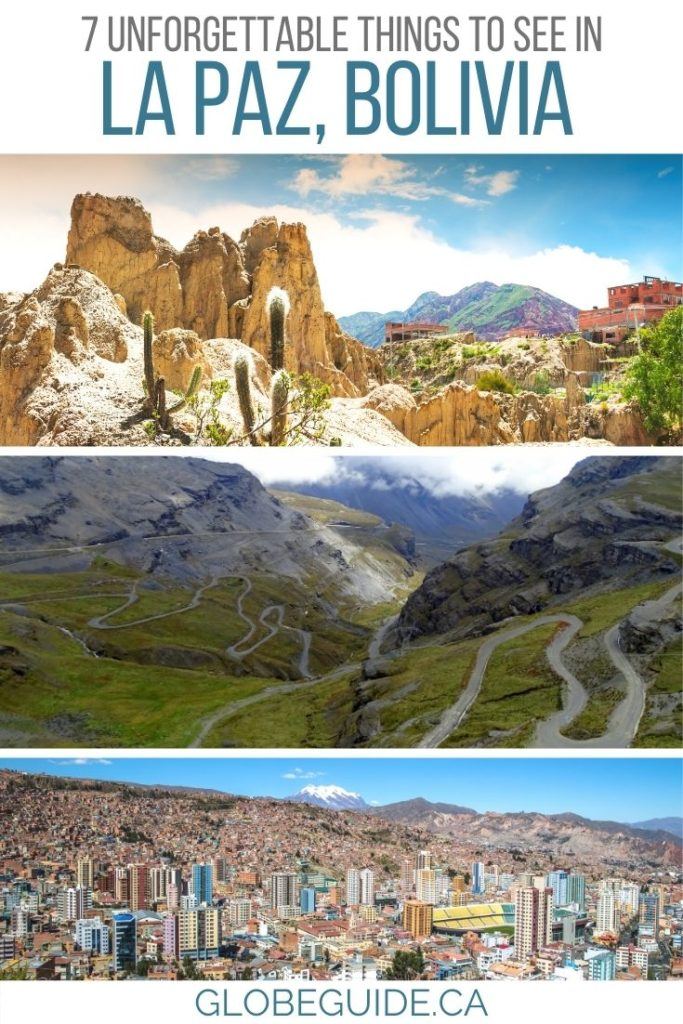 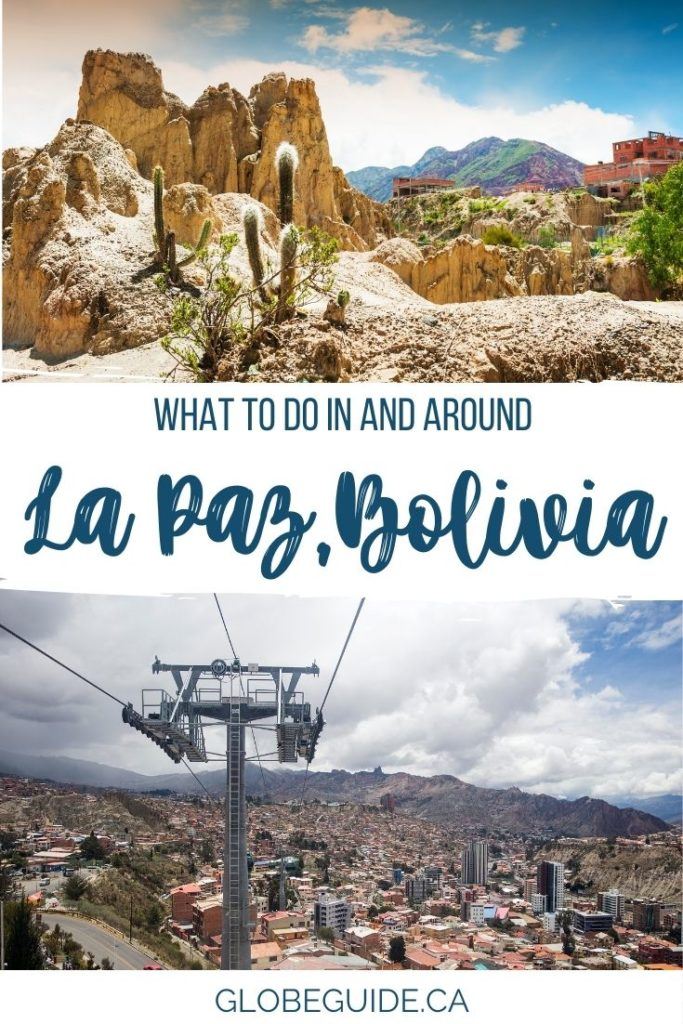