It used to be that when you had a problem with an airline, you either patiently stood in line at a ticket counter, or cradled a phone to your ear listening to horrid elevator music in hopes of finally connecting with a real person. Then, a wonderful wonderful thing was invented…Twitter!

Yes, I have found that you can actually get a response faster by tweeting at an airline, than trying to go all old-school and have an actual conversation with someone.

I’ve unfortunately had to test out this theory quite a few times in the last year, and am happy to report that I had more success by contacting them through social media then I did chatting on the phone.

The first time was while trying to check in for an Air Canada flight with no success. The lady I spoke with on the phone was no help (something to do with a code share?) and said we’d have to wait until the airport—not great when you’re heading out on your honeymoon and are not booked to sit together at all during the 24 hour flight. So, I went all techy and tweeted Air Canada, and within 20 minutes had brand new seat assignments!

Interestingly enough, their social media handlers seem to have more of a grasp about the general goings-on at the airline, based on my experience trying to book a flight with a promo code. When it didn’t work, I phoned Air Canada’s call centre, and got a useless “well, your flight probably isn’t valid” “well I don’t know what’s wrong” “well it probably doesn’t apply” series of responses from the bored ‘customer service’ agent who picked up after 25 minutes on hold. Not loving his answers, I tweeted Air Canada and sure enough got the following message back: 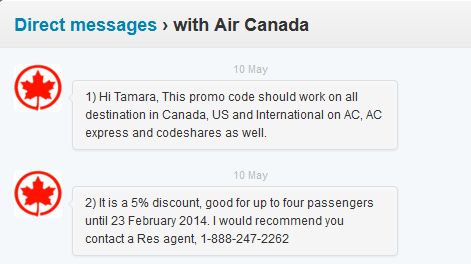 Unfortunately by then it was too late and the flight had disappeared, but you get the point. If at once you don’t succeed, try, try again!

Despite the fact that most travellers book their trips online and are avid Twitter/Facebook users, some companies haven’t quite grasped the importance of being adept with social media. Take my recent exchange with KLM. Concerned about an upcoming trip to Egypt, I phoned them to see about our options of extending our stopover in Amsterdam so we would be spending less time in the potentially dangerous country. Unfortunately, the agent I spoke with did not speak English very clearly so I was left a bit confused, and decided to go the written route instead. Despite sending @KLMCanada a message and DM request, I still to this day have heard nothing back. Really?? So, I resorted to messaging @KLM and thankfully they got back to me in a reasonable time frame—though they were not terribly sympathetic to our concerns.

I would like to point out that Singapore Airlines once extended a layover for me in Tokyo with absolutely no questions asked or extra charges (ahem!)…but that’s a story for another day. My husband and I have both also sent e-mails to KLM and have not gotten a single response back—a troubling trend I’ve noticed with airlines including WestJet. I sent them an e-mail about a travel credit question and two months later haven’t gotten a response. But look what happened less than 12 hours after I sent them a DM…

So in summary…Twitter is a traveller’s new best friend!

Now, let’s hope that more airlines take note—or bring their other customer service responses up to the same level. Because let’s face it, sometimes it’s just nicer to talk to a real person.

La Paz, Bolivia to Uyuni: The worst flight ever