Getting half cut at the Half Corked Marathon wine run 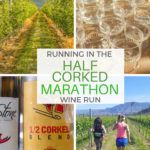 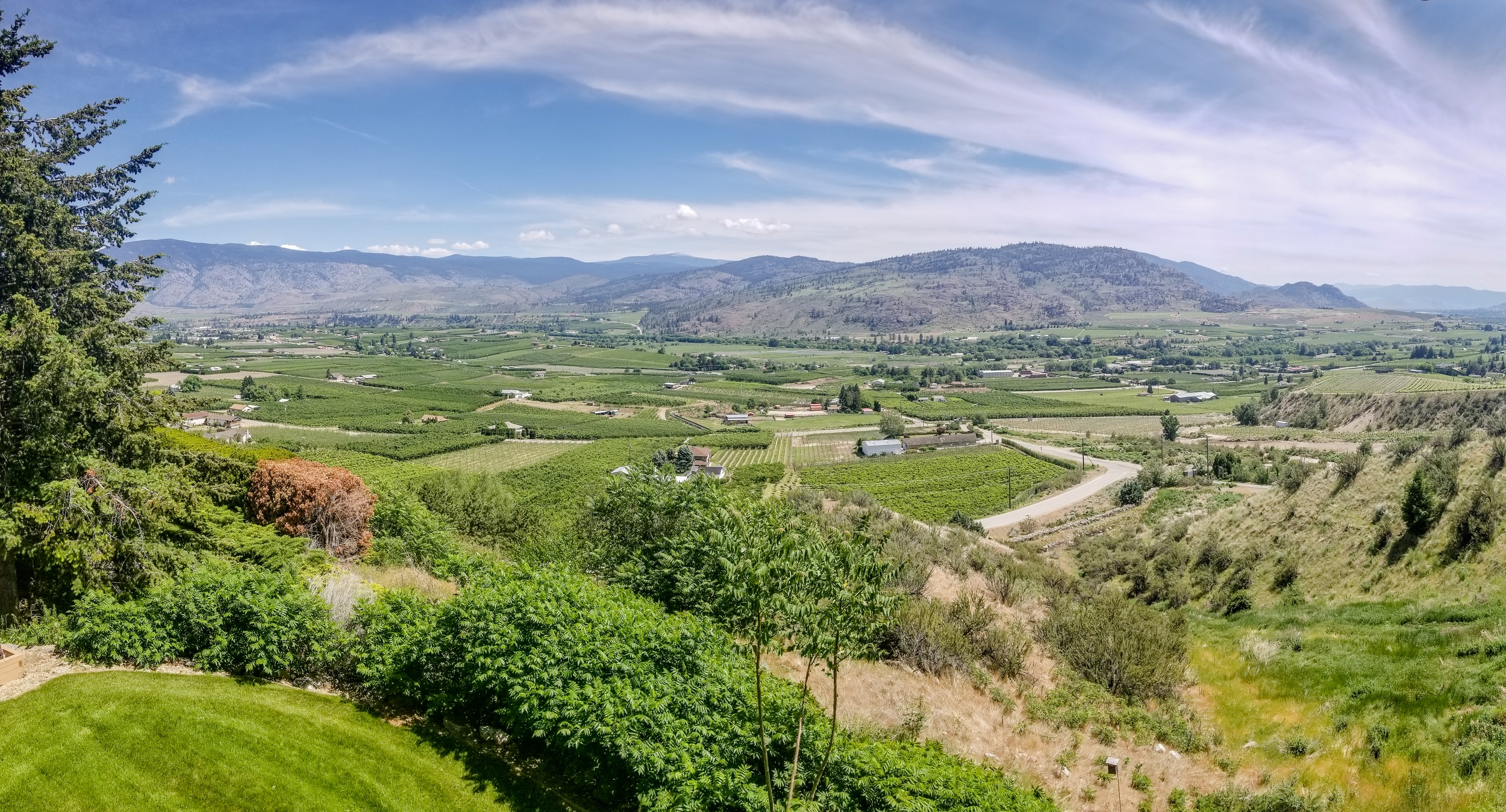 The Okanagan Valley, host of the Half Corked Marathon

What do a pair of runaway brides, bacon and eggs, two boozed-up Barbies, sun-soaked vineyards and unlimited wine have in common?

The Half Corked Marathon, which you can probably already tell is pretty much the best party of life. 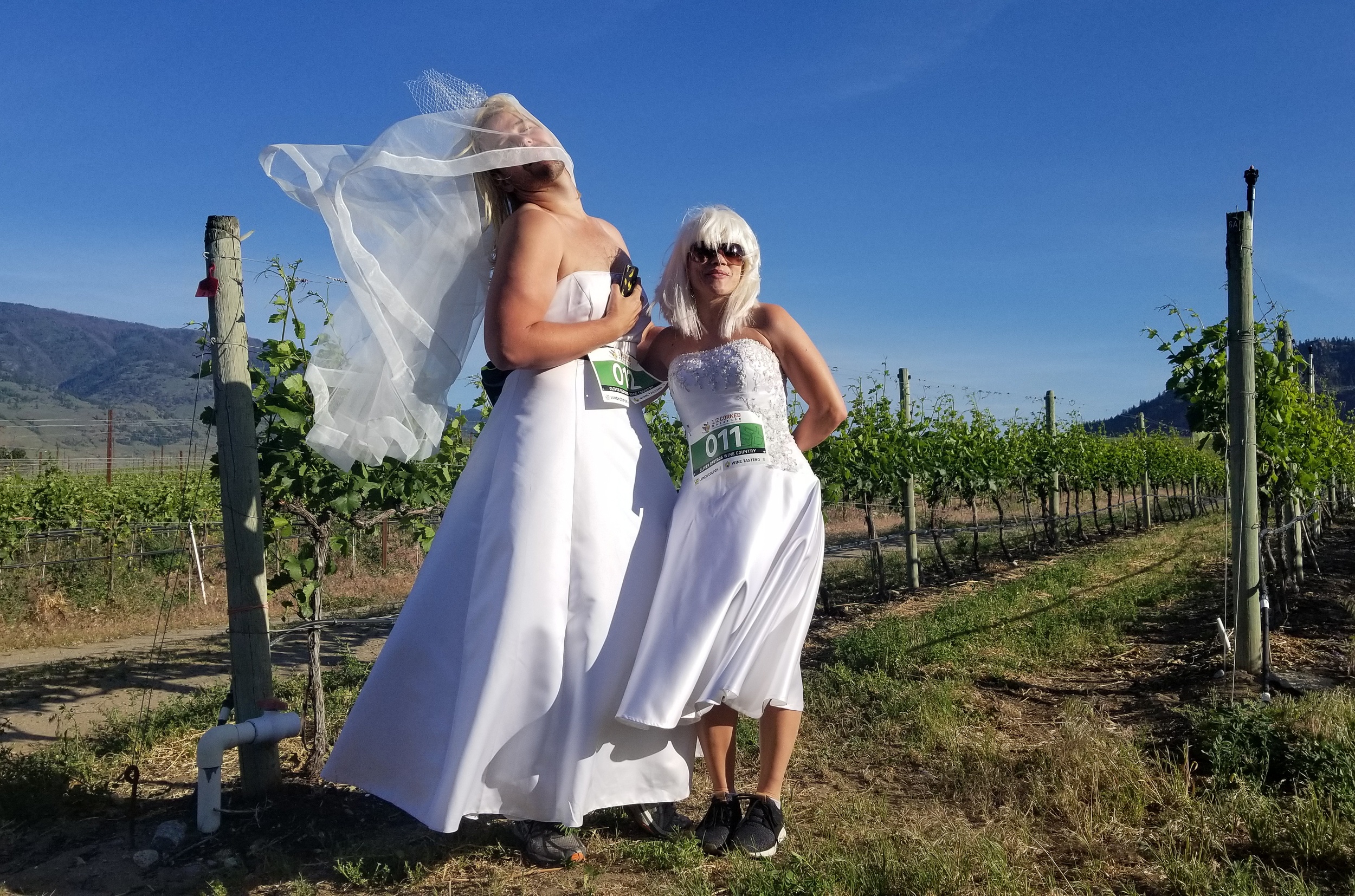 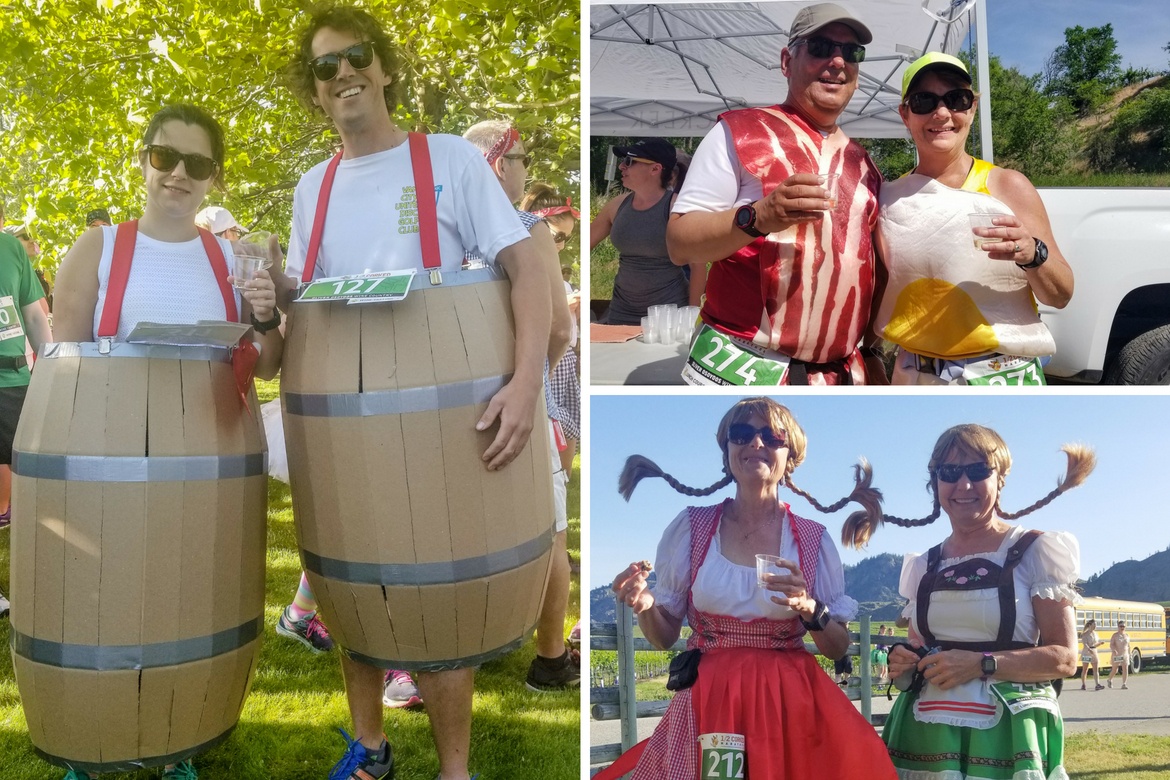 Wine barrels and Bacon and Eggs are just a few of the cute costumes on display!

Every spring, more than a dozen Oliver and Osoyoos wineries play host to the 18-kilometre long run, a route that winds right through the vineyards dotting the landscape throughout the scenic Okanagan Valley in British Columbia, Canada. But this isn’t your typical marathon, honey. Nope, this one includes something that I strongly believe should be a key part of every physical activity: wine. Lots and lots of wine. (Surely this is something they’ve already figured out in France, non?).

The Half Corked Marathon route has 16 (!!) wine stops along the way, and if you’re doing the math that means you barely need to run one kilometre before you get to stop and DRINK! Then repeat, over and over again!

That in itself would be enough to sell me on signing up for the highly-anticipated event (because hiiiii, I already polish off a glass of vino post-workout on the regular. I have no shame). BUT…wait for it…there are also costumes! 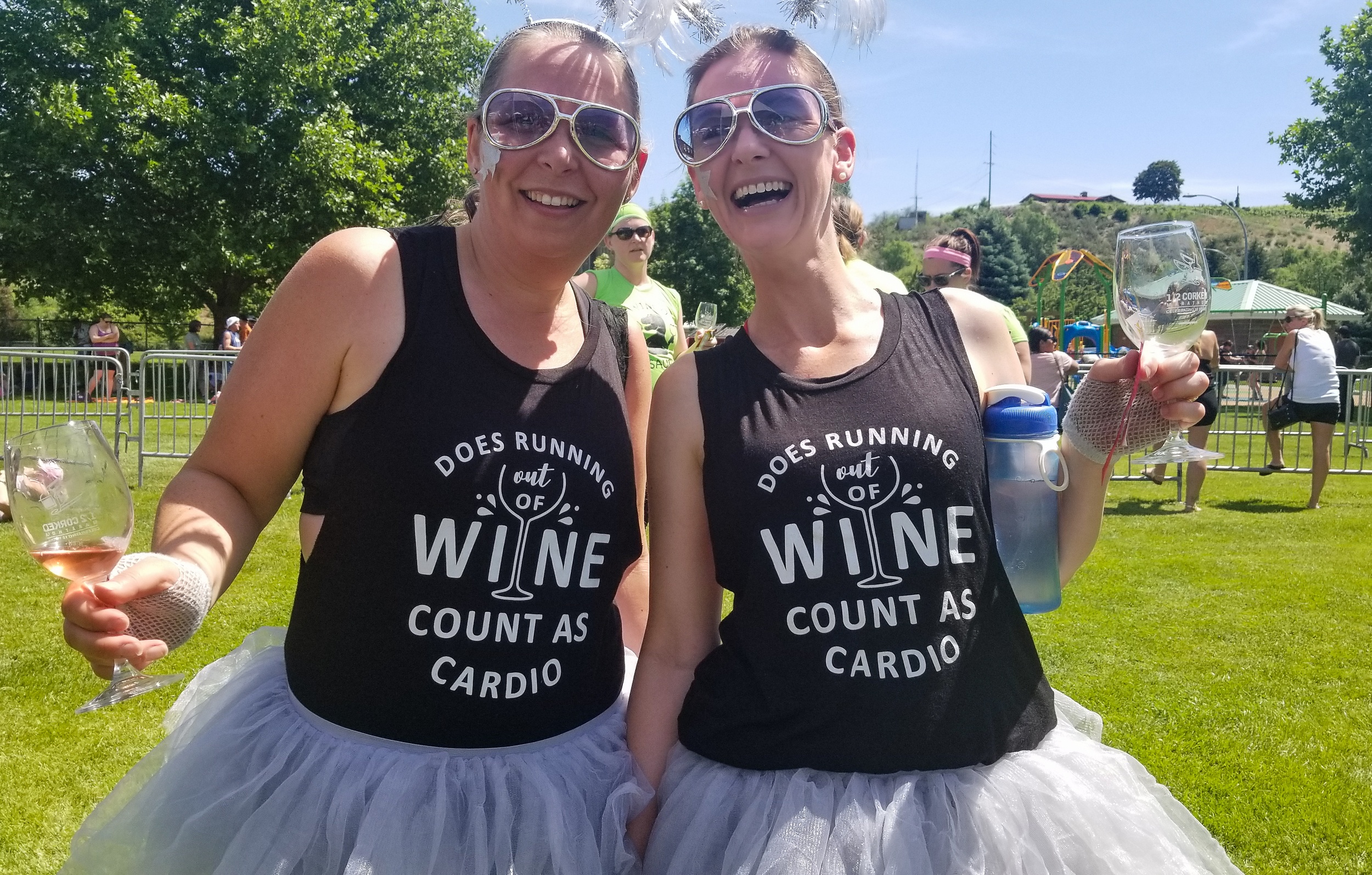 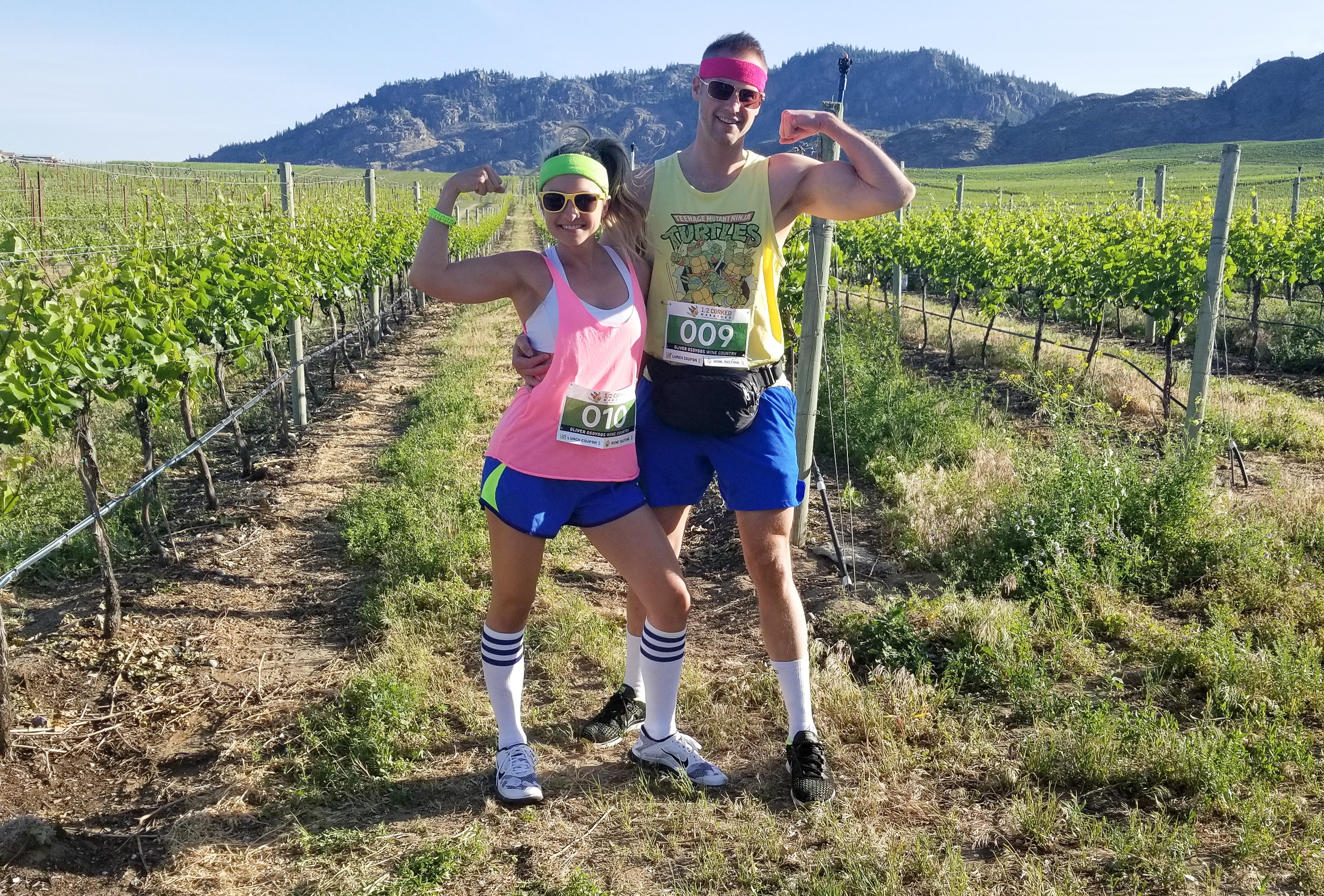 With more than 1300 runners hitting the trail each year, there’s no shortage of colourful characters dolled up in ridiculously creative, wine-themed outfits to marvel at: think ‘The Grape-Gatsby’, a pair of wine barrels and my personal favourite, the Mali-booze Barbies (who rightfully nabbed a prize for their getups during the 2018 race). This just might be best people watching you’ll find north of Las Vegas, folks.

There also seems to be direct correlation between how well-planned a costume is and how much of a nightmare it is to actually move in, so thank goodness there’s a Jesus Juice stop every 10 minutes amiright?! 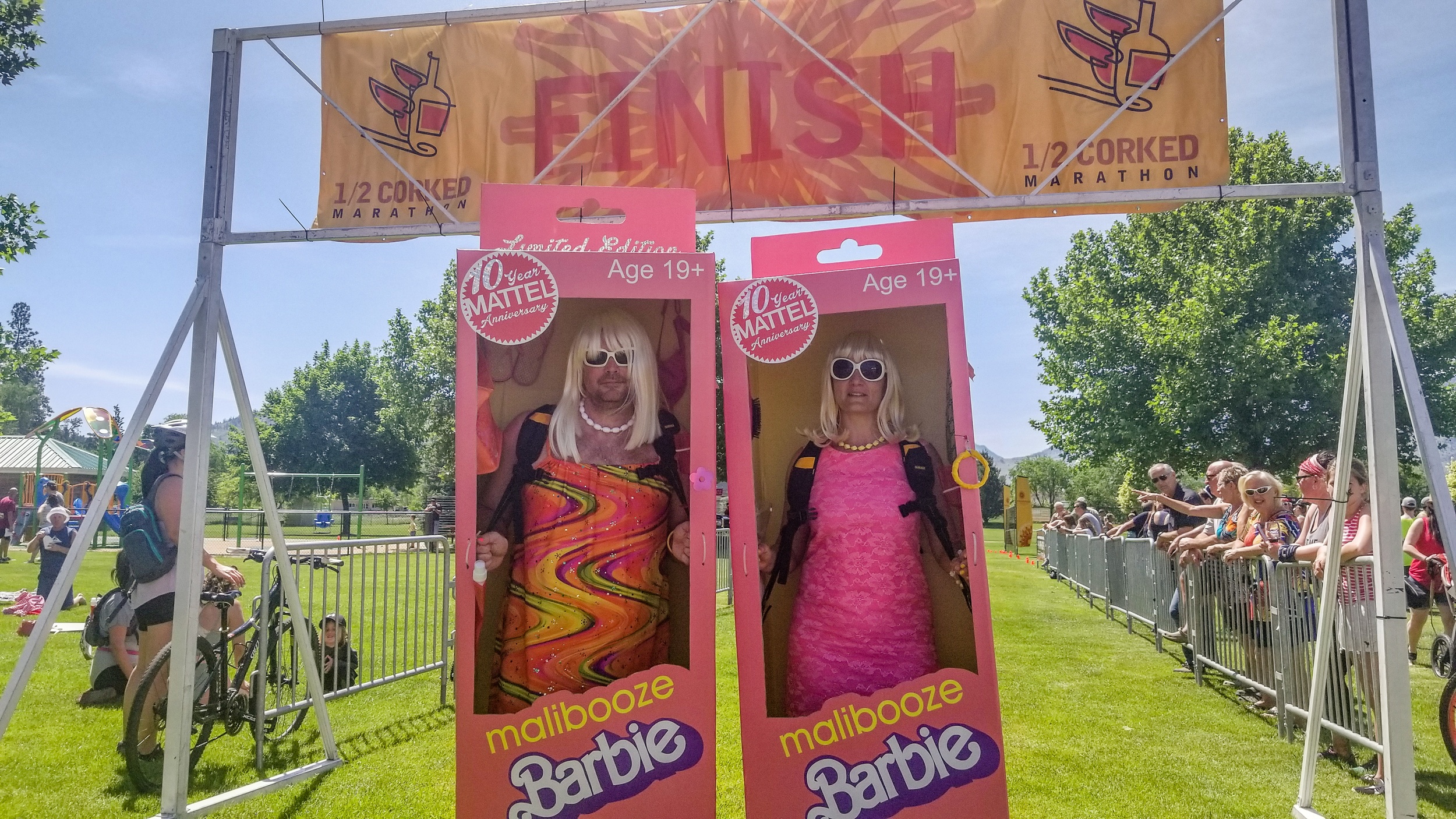 Clearly this wine run has nothing to do with achieving personal bests—unless it’s along the lines of how many glasses of rose you can down before 9 a.m. While running a half marathon might sound intimidating to those who aren’t regular runners, the fact that there are so many opportunities to catch your breath and fuel up along the way makes tackling the course very manageable (even if you’re wearing a wedding dress. #TrueStory). In fact, the race isn’t even timed, and as the announcer enthusiastically reminds everyone at the beginning, “If you come in first, you’ve actually lost.”

To accommodate all the runners (demand for tickets is so high that there’s a lottery system in place), the Half Corked Marathon has three heats, with the first kicking off around 8 a.m. before the heat of the arid Osoyoos desert becomes a factor. Naturally you don’t even need to make it to the first stop for a glass of champs, as drinks are served at the starting line while racers mingle. Then just like that, it’s off to the races faster than you can say Cabernet Sauvignon. 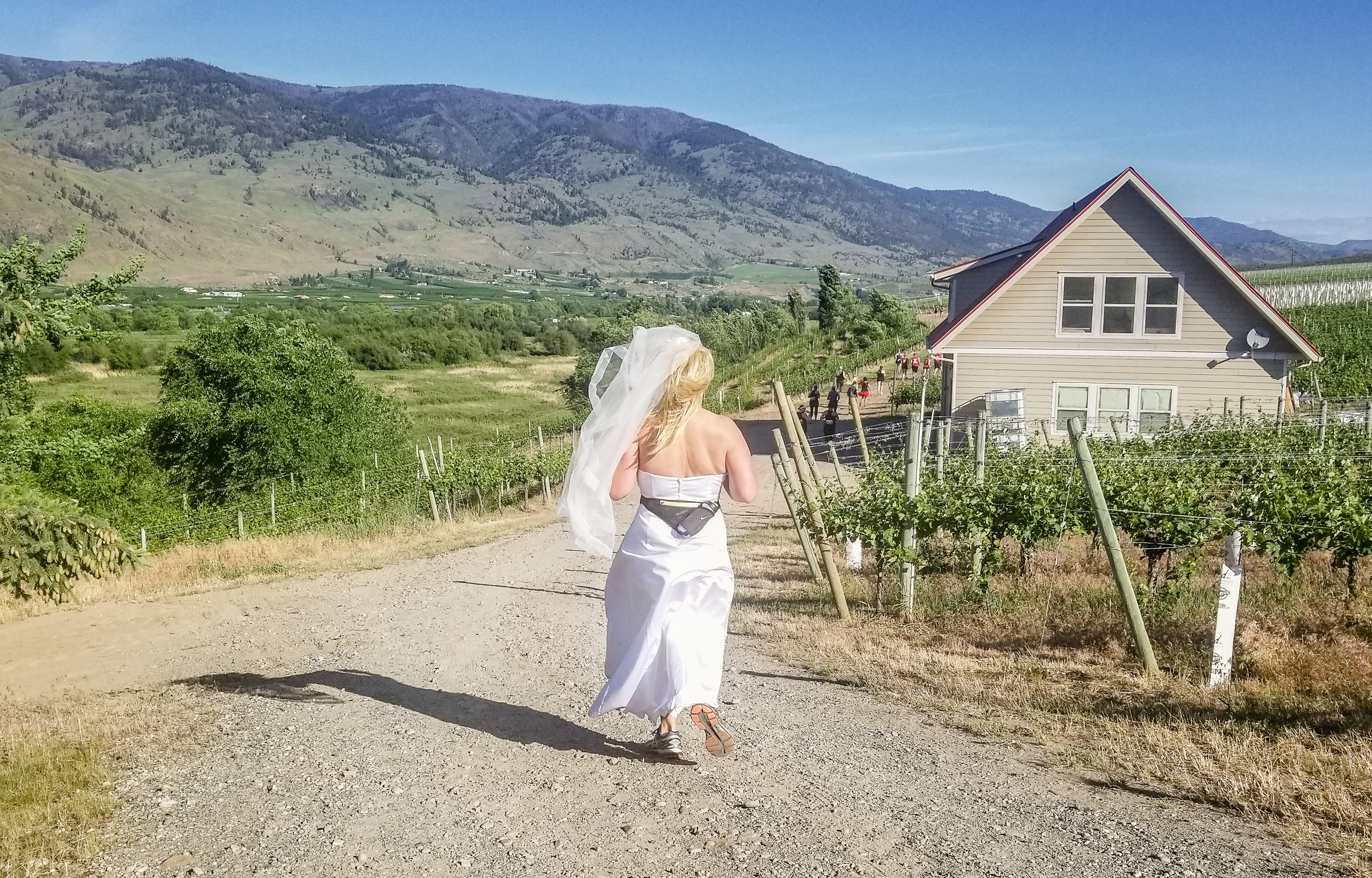 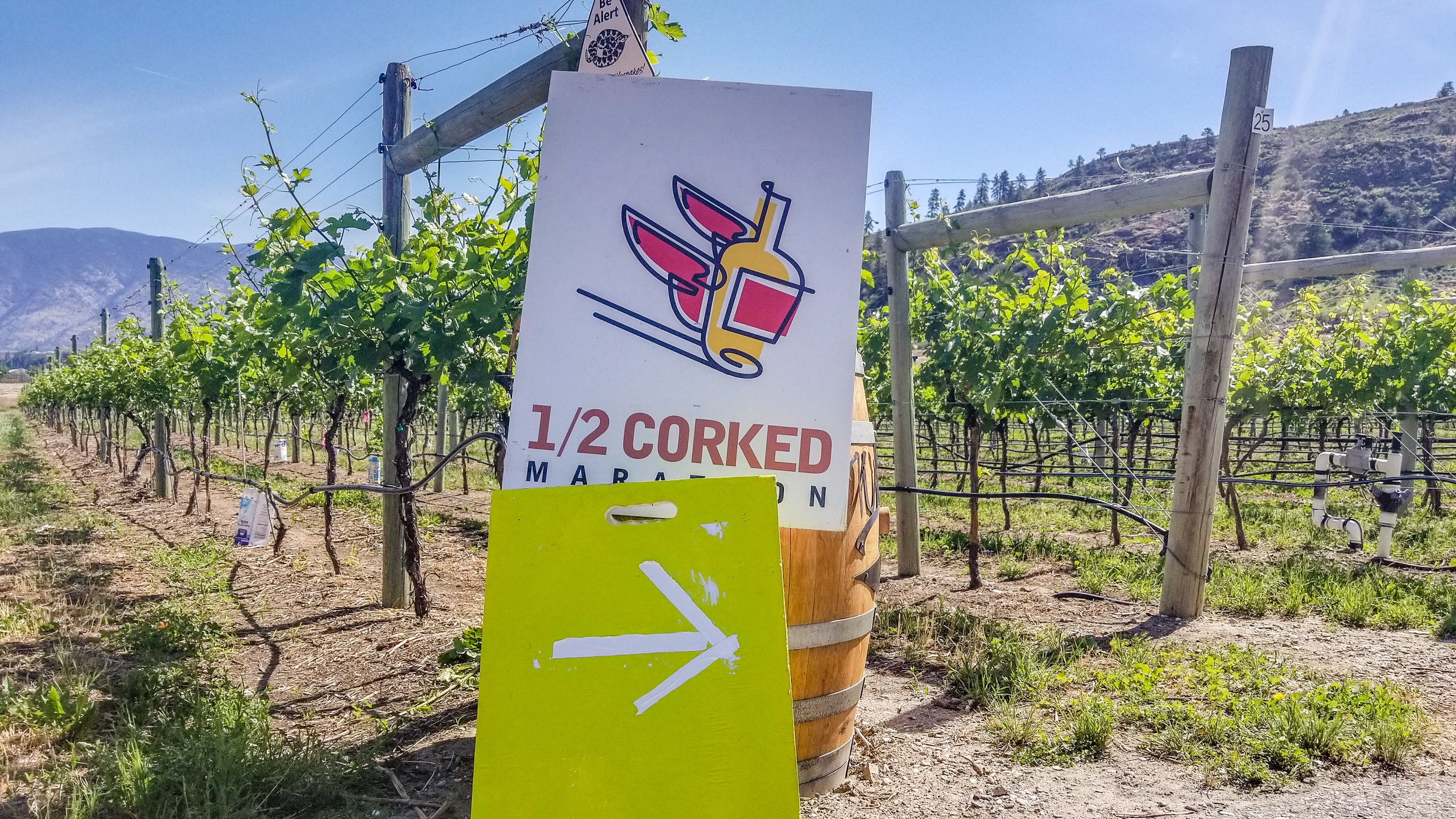 The wine country half marathon links many Okanagan wineries, with runners often passing right through the vibrant, leafy vineyards to get to each stop. Since each one is hosted by a different winery free to serve whatever they please, every tasting is a surprise. Some stick to pouring a few of their varietals, while others go all out and pair their vino with the likes of Thai barbecue, fresh-baked bread, organic energy bars or even full buffet lunches (shout out to Silver Sage winery for the epic spread!).

All that food, and the fact that each pour is only about an ounce, means most runners cross the finish line in surprisingly better shape than one would assume at an event solely focused on drinking copious amounts of wine. Sure, it may take about four hours to actually get to the end which is about twice as long as your average half marathon, but HEY THIS ISN’T TIMED, REMEMBER? 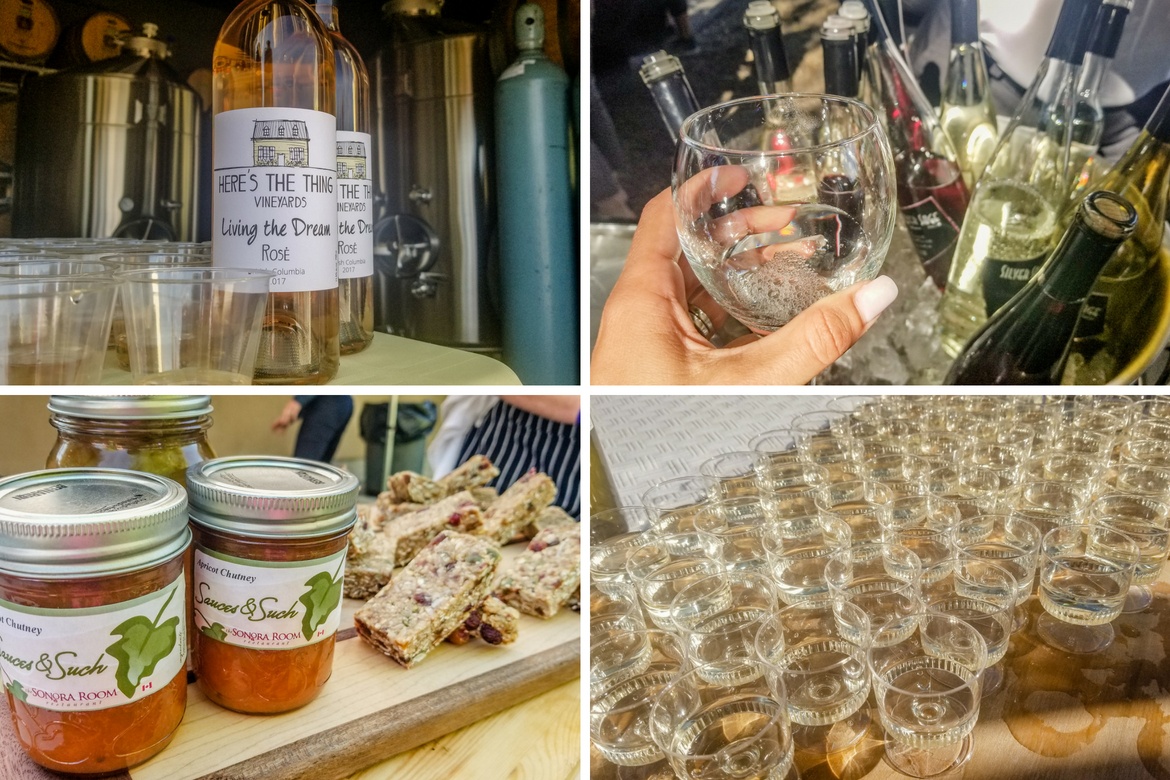 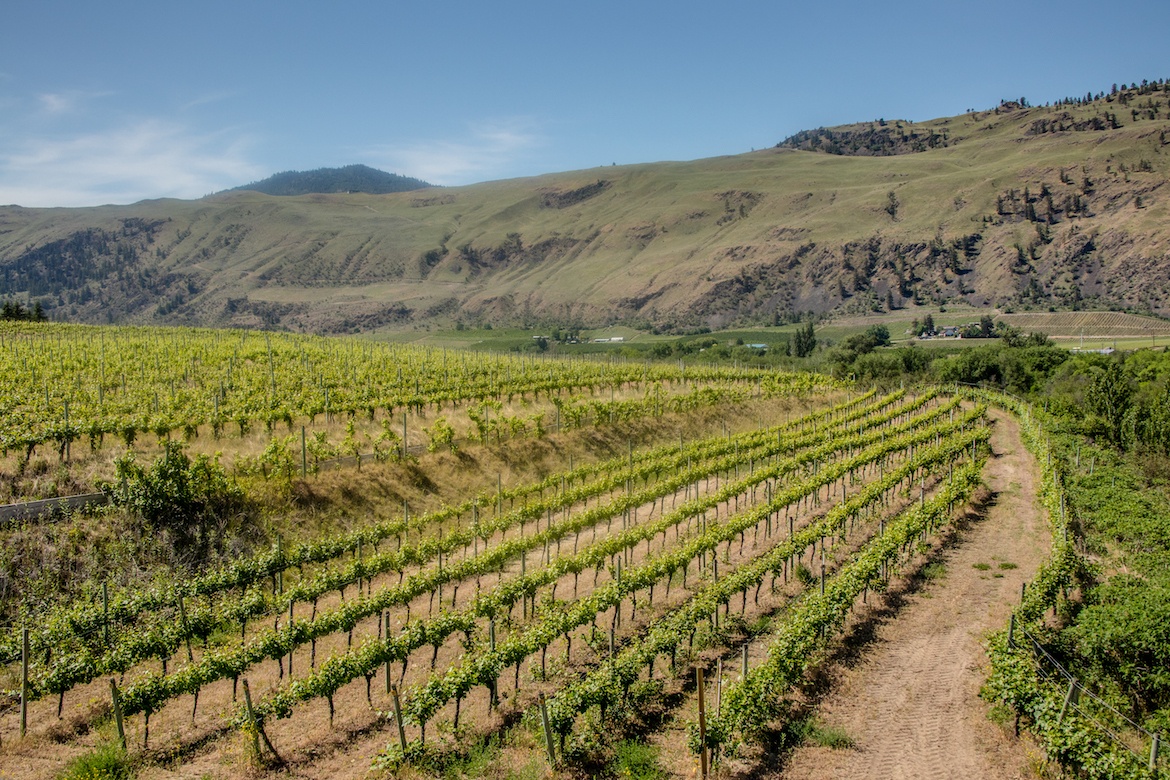 While sporting a bib for the Half Corked Marathon is considered the hottest ticket in town, the fun doesn’t end once the last racer staggers across the finish line. Several events take place in the Oliver and Osoyoos vineyards throughout the weekend, including dinner at a winery the night before (pre-gaming at its finest), and a post-race party at the finish line featuring live entertainment, food trucks and, you guessed it, more wine tasting. 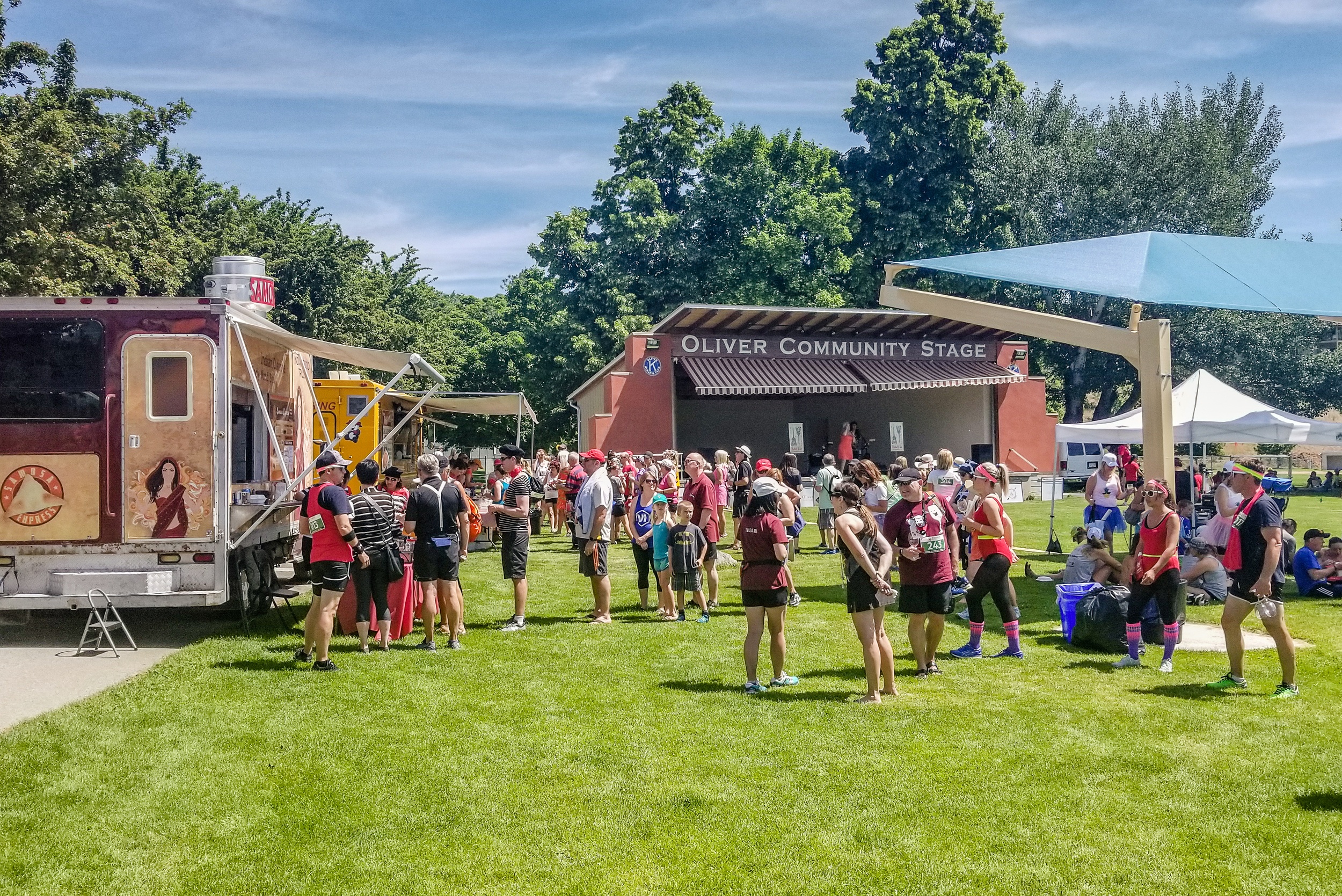 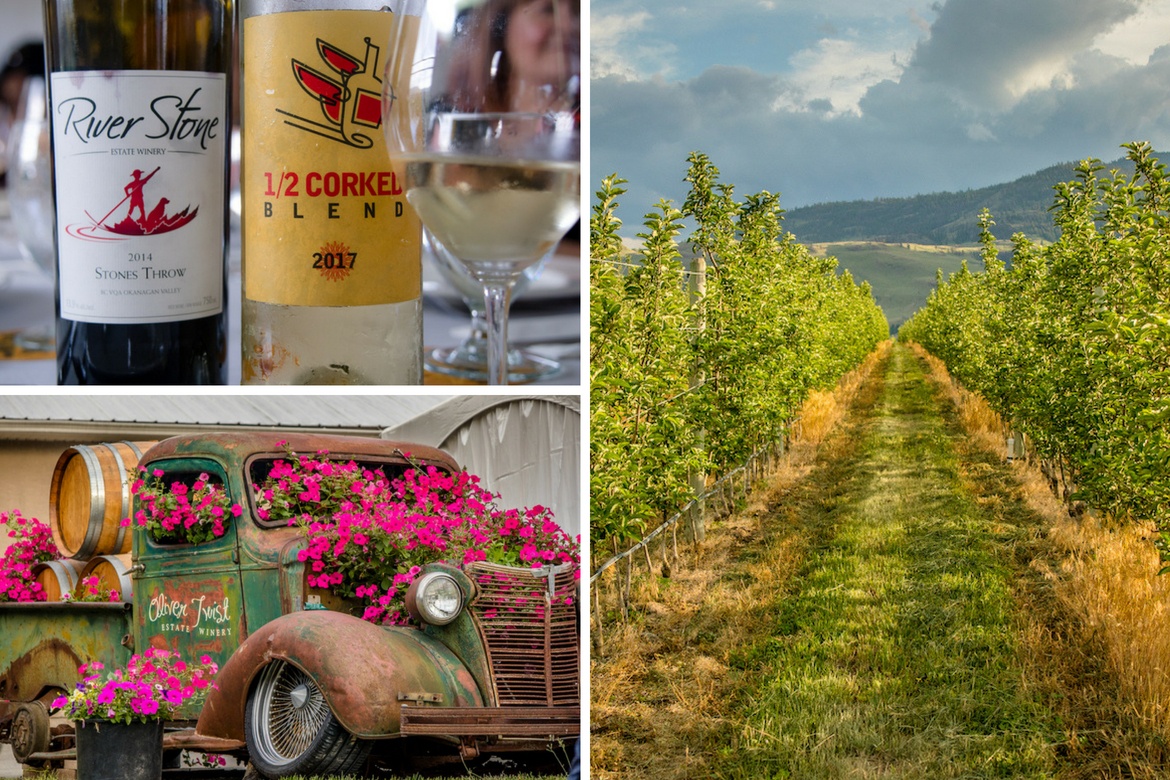 Dinner in a vineyard, the night before the race 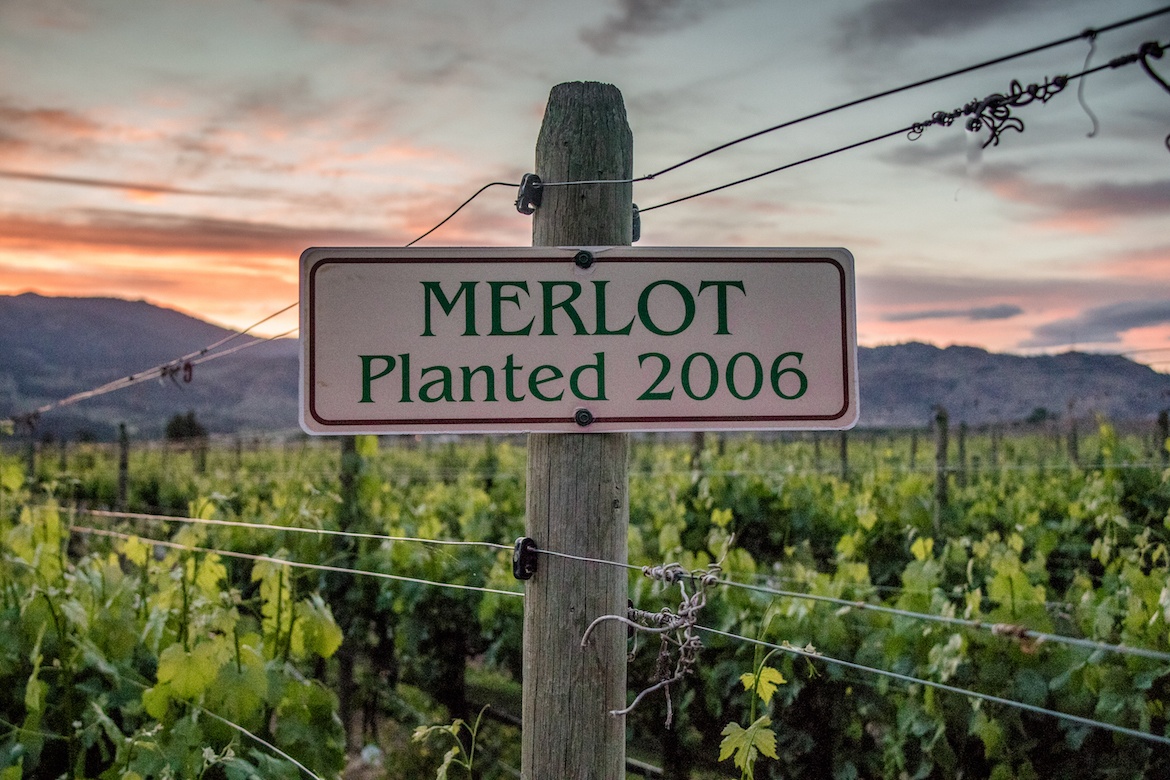 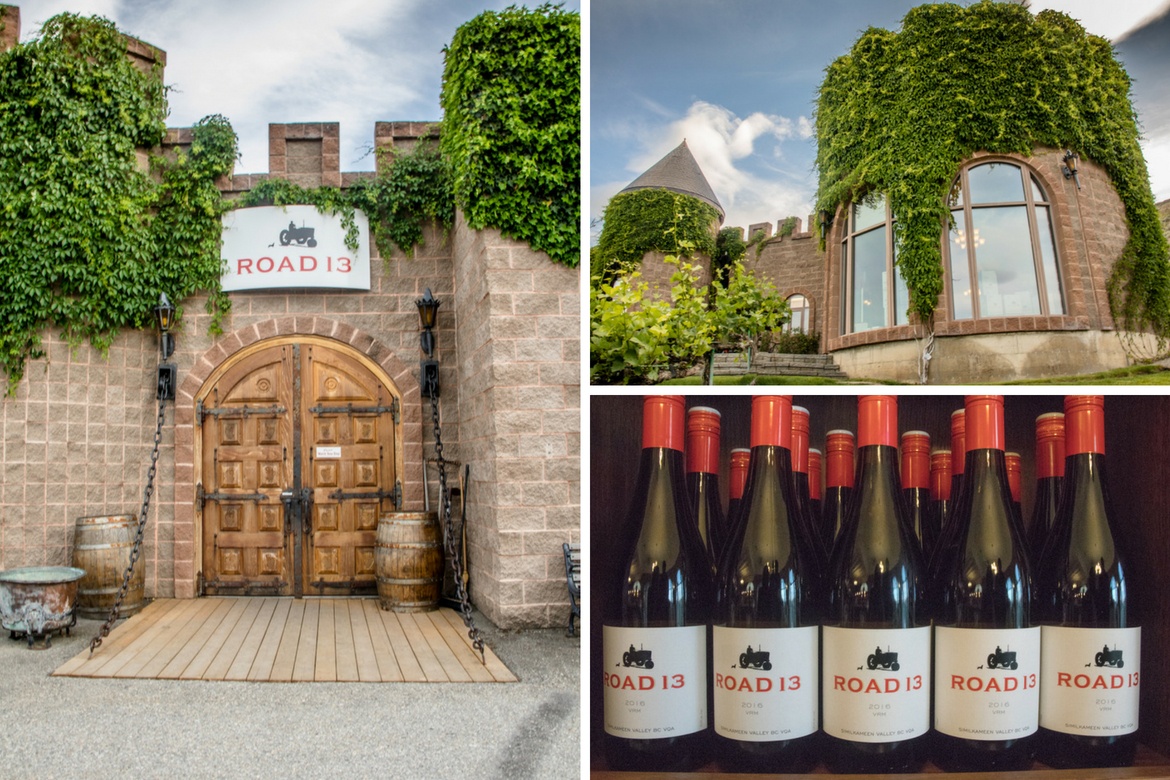 A post-race barbecue at Road 13- a winery in a castle!

For those looking to challenge themselves to a run without taking it too seriously, the Half Corked Marathon ticks all the boxes. With plenty of laughs, a bit of hard work, unbeatable scenery and a million reasons to be silly, there’s no question this is the most memorable Okanagan wine tour in the entire valley.

Or at the very least, an excuse to wear your wedding dress again. 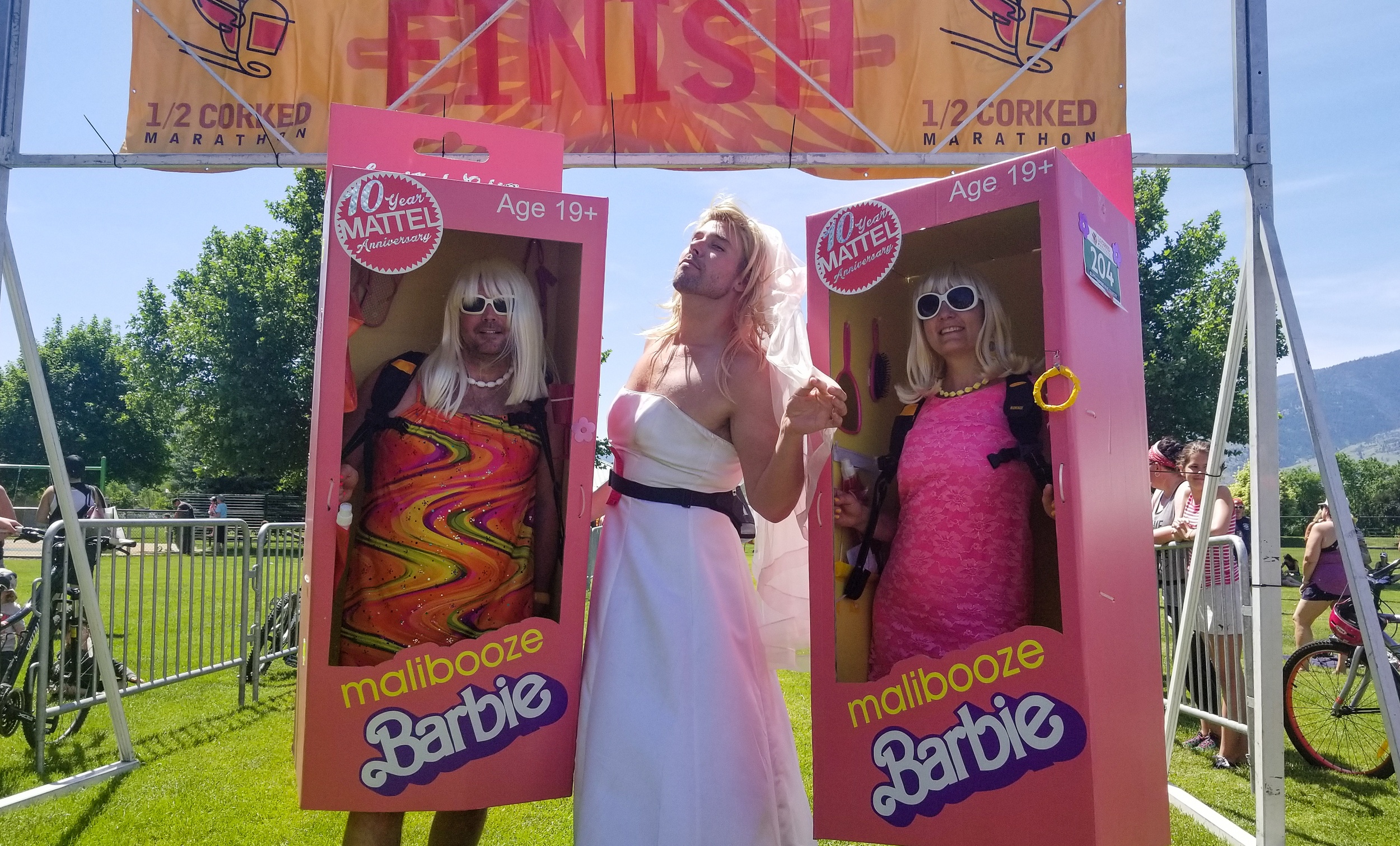 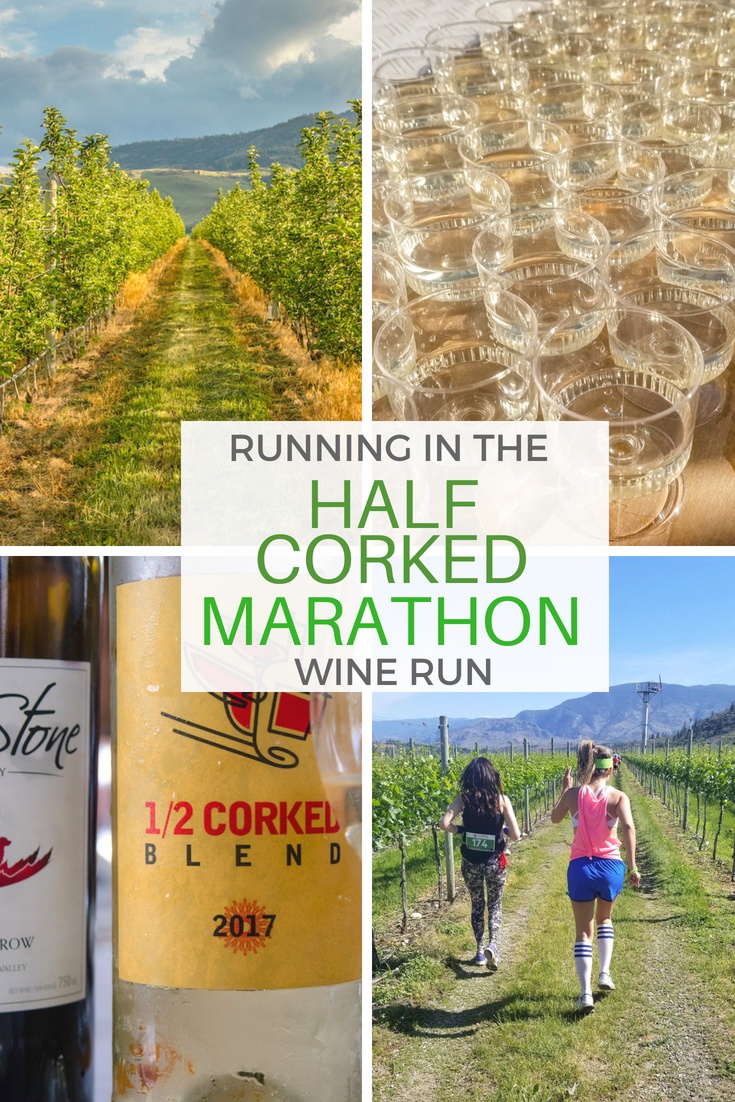