A girl’s guide to surviving a guy trip 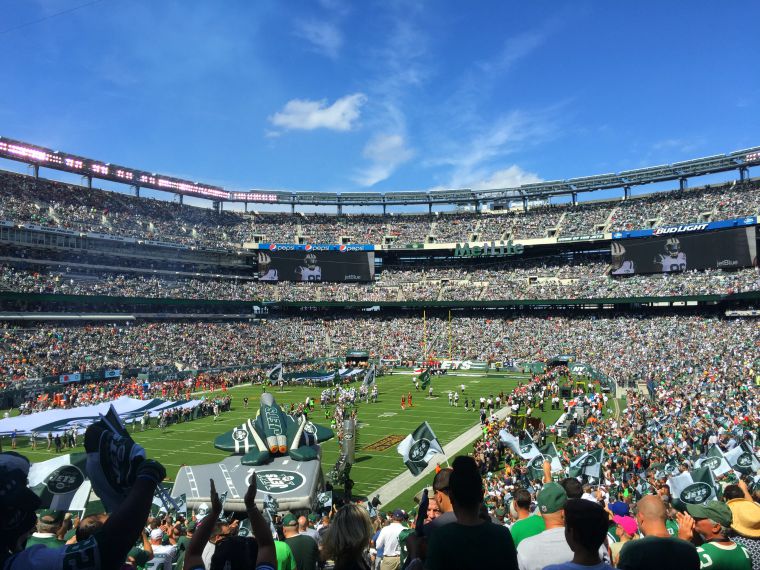 As someone who strongly prefers glamping over camping and champagne over beer, I’m not exactly the best candidate to drag along for a guy trip. But when my husband and his buds were planning a sports-themed long weekend in New York City, I got a serious case of FOMO and booked a last-minute plane ticket to join them. I mean, when else would I get the chance to see my first MLB game, NFL game and the US Open tennis finals, all within a few days? Plus, it’s New York.

Here’s what I learned from the experience, so other ladies who find themselves tagging along with the boys can be prepared! 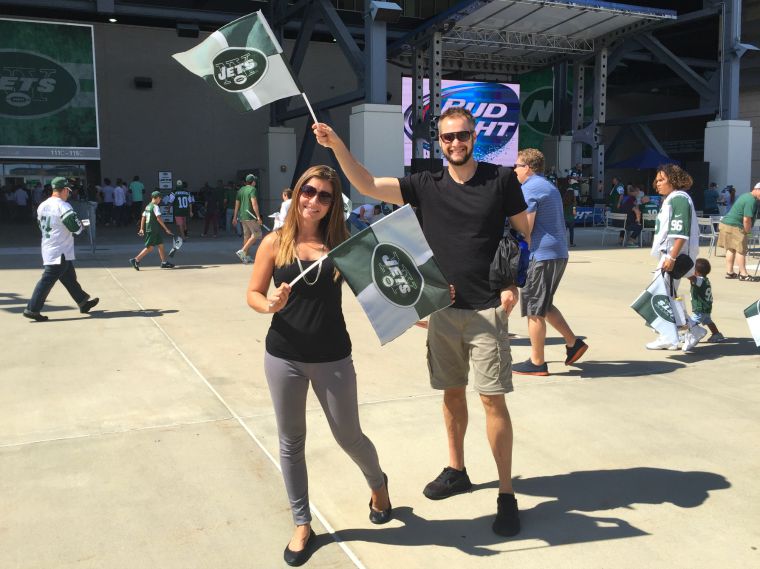 Jets fans for a day!

Chances are the weekend itinerary will involve some sort of sports, whether it’s hitting the links for a round of golf, going to a hockey game or simply playing copious amounts of darts (wait, does that even count?). I estimate 70 per cent of our weekend was dedicated to sports, and the rest of the time was divided between drinking beer while sports were on TV and sleeping. 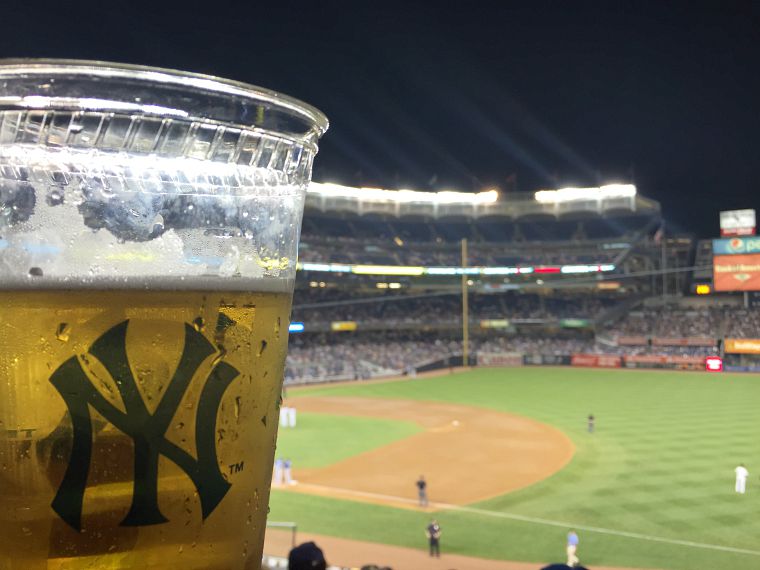 If this is how your itinerary looks, try and make the best of it. For example, I spent my time at the US Open finals scanning the crowd for celebrities (success: we spotted Catherine Zeta-Jones, Michael Douglas, Queen Latifah, Robert Redford and Ciara to name a few) and scoping out the best drinks—hello melonball vodka cocktails! 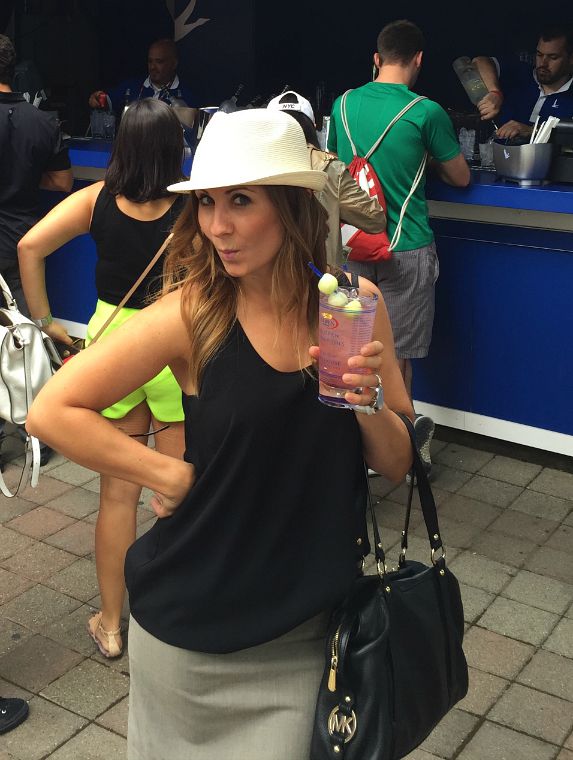 I have to admit, the NFL game was the one event I was initially planning to pass on since it takes about 8 years to get to New Jersey from Brooklyn. But it turned out that was the highlight of our entire trip—who knew Jets fans were so outrageous! J-E-T-S Jets Jets Jets! 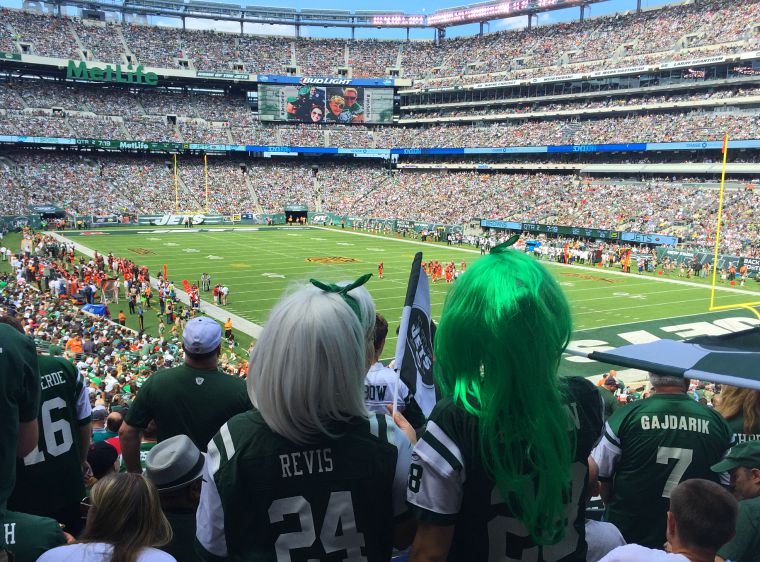 With any luck you’ll end up an event that ends up being a blast, hit a hole in one, or find out the Green Bay Packers are your new favourite thing. If not, well, hopefully there’s wine. 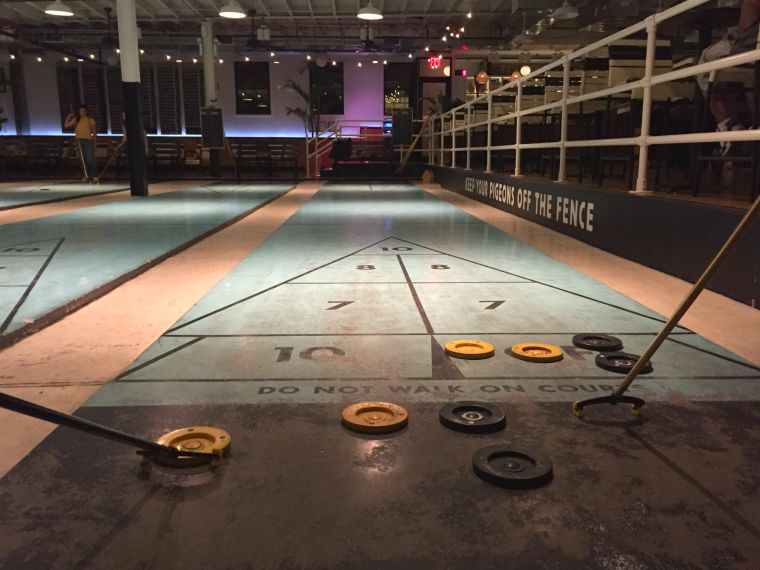 Naturally, your buds will find a bar that also includes sports. Like shuffleboard.

All of the booze

Of course the key to any successful boys weekend is to not remember any of it, which is why men insist on being drunk the entire time. As such, get your drinking face on. 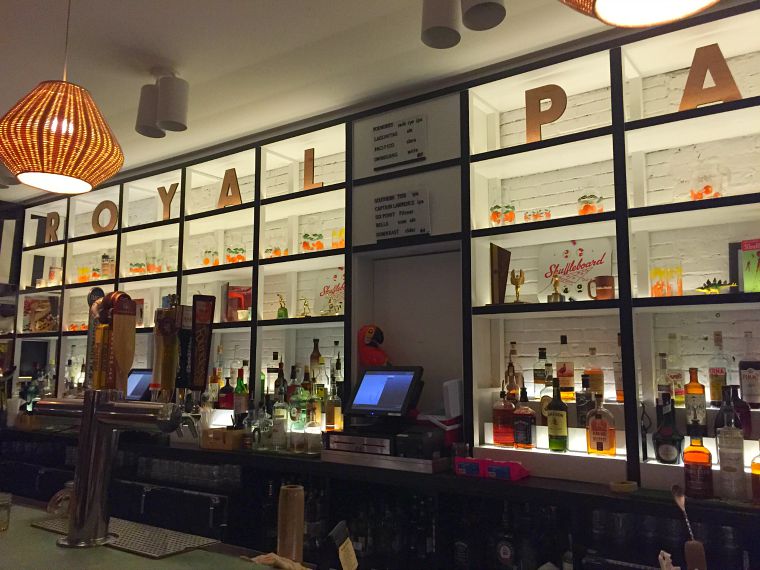 The average day starts with whiskey-spiked coffees, beer by lunchtime (or earlier if you’re already at a game), and rounds of drinks throughout the evening and well into the morning hours (am I the only one who finds sleep a necessity?).

Keep in mind that someone’s got to pay for all that booze, so unless you’re with your honey you should plan on paying for a round of drinks at least once a day, if not more depending on how degenerate your group is.

RELATED: 10 camping tricks that will make your life easier

I think the ultimate crime of our weekend was that we were in freaking NEW YORK CITY and basically didn’t see any of it. This is what happens when sporting events take 3+ hours, not including travel time. From what I’ve seen, guys typically don’t gravitate toward guided city tours and would much prefer planting themselves at a bar or in a pool.

Ladies who find themselves in this position had better hope they don’t care about the destination they’ve travelled to, or find some way to split from the group for a few hours of alone time. In my experience, the threat of a shopping trip is extremely effective. 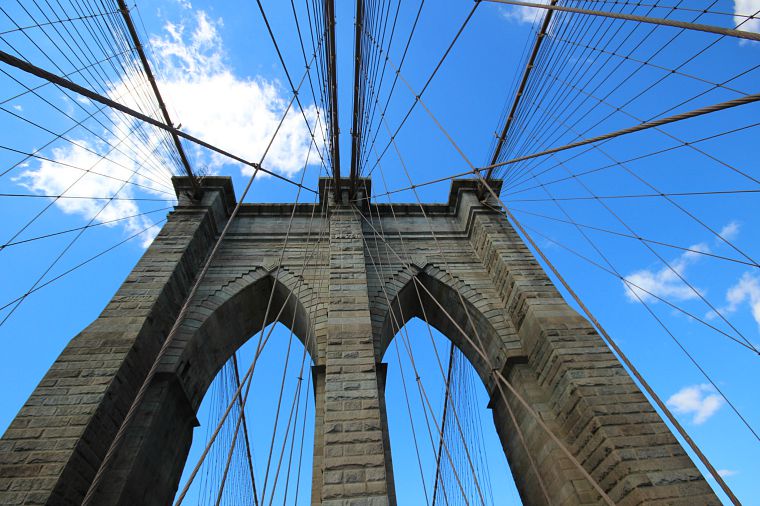 The one landmark I managed to see- the Brooklyn Bridge!

Anyone who has ever tried to get into a nightclub knows what this next one is about. Ladies are like, “Oh, you mean when I walk right up to VIP and then people buy me drinks all night?” whereas guys are like “Oh, you mean when I stand in line like a chump for 45 minutes and then get to pay $50 a head for the privilege of walking through the door?”

The beauty of being a gal on a guy trip is that you can be their hero. Simply walk up to the door of said-nightclub alone, and chances are the bouncer will let your group of guy pals in with you right away once you plead your case. Even if there’s a cover charge, your buds hopefully won’t get greased as badly as they would have it you weren’t there.

You know that great Air B&B y’all rented with the amazing kitchen that you can make healthy meals in? Yeah, this is what you’ll actually use it for: 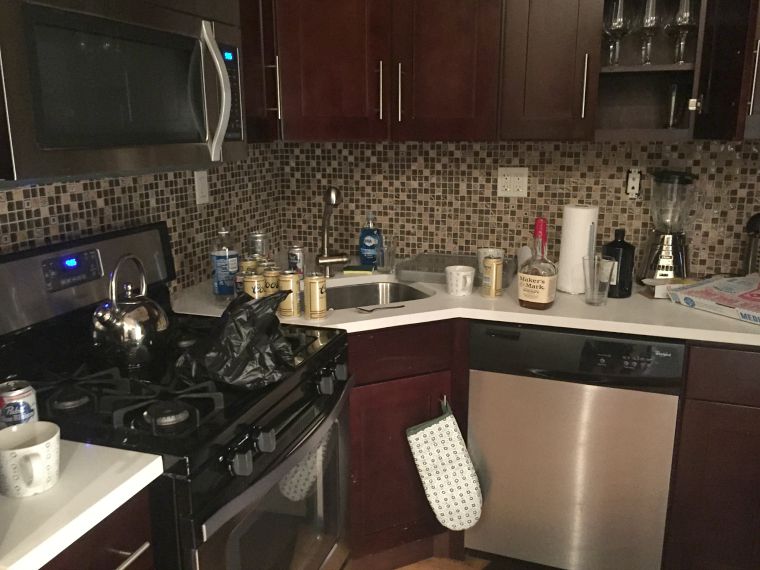 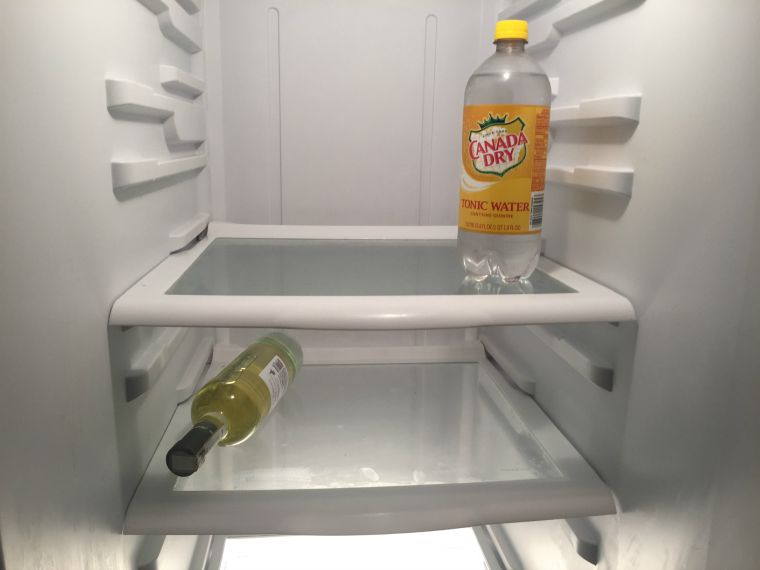 Notice how my wine is the only booze left?

My advice? You’ll probably find yourself eating most meals out (stadium hot dog, anyone?), so take it upon yourself to stock the fridge with some healthy snacks like fruits and veggies.

I wouldn’t be doing my job if I didn’t end with a warning about all the poop and fart jokes you’ll endure. Conversations mostly revolve around who was on the can the longest, or who spent the night praying to the porcelain god.

Oh, and you know how they say girls take forever in the bathroom? Well, they clearly haven’t had the misfortune of trying to share a bathroom with six men who are feeling rough after a night on the town. There is simply not enough air freshener in the world.
My tip? Ensure you get your own bathroom.

Have I scared you enough yet to run the other way if you ever get invited on a guys trip? I hope not, because let’s be clear about something: despite my warnings, chances are you’ll have a BLAST! Guys are generally a lot more laid back so that’s one bonus, plus travelling is supposed to be about getting outside your comfort zone and trying new things.

And at the very least, you’ll probably get a some free drinks out of it.

Have you ever been dragged along on a guys trip? If so, what was your experience like? Share in the comments below!

The 10 commandments of airport etiquette

Viva Las Vegas! A guide to the city with something for everyone 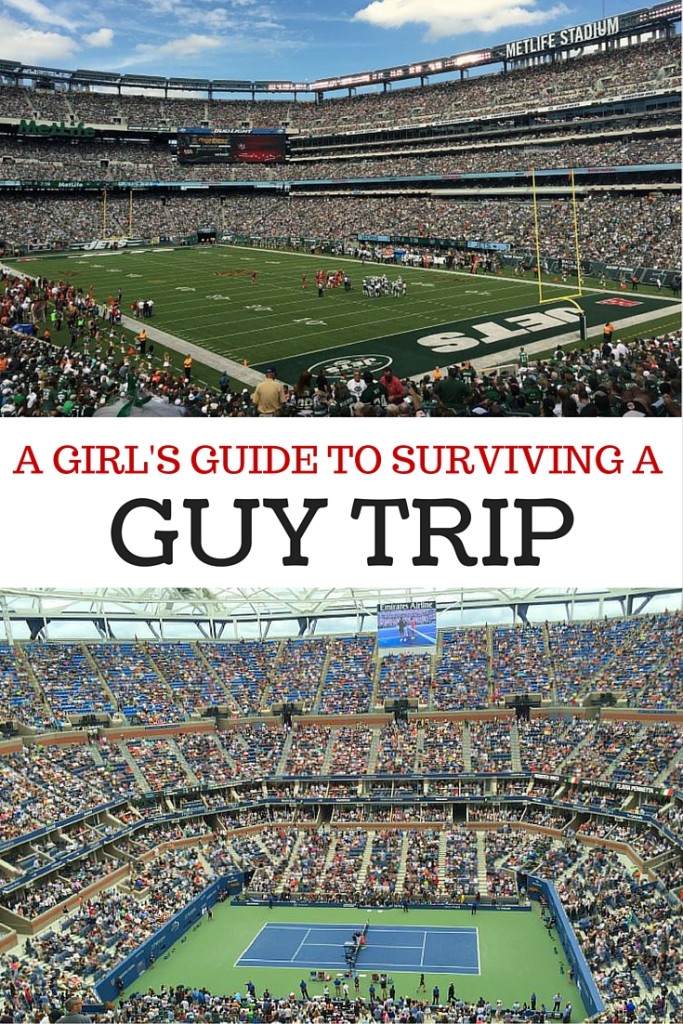