Would you hurtle down a bobsleigh track reaching speeds of up to 100 km/h, with only a couple of wheels and a helmet between you and the hard cement? How about whipping down a zipline—from the top of an Olympic-sized ski jump? If you answered yes, then Calgary’s Canada Olympic Park is the place for you—you little daredevil!

COP was built to host the Winter Olympics way back in 1988, and the massive complex in northwest Calgary is now used year-round. In the winter, it hosts skiers and snowboarders, and is also used as a training spot for Canada’s Olympic athletes. In the summer, COP is totally transformed to include a mountain bike park, mini golf and the Skyline Luge, as well as the aforementioned thrill-seeker activities. I was invited by WinSport Canada to try them out, and let’s just say there was a lot of screaming involved!

First up was the 500 metre long zipline, which features a vertical drop of more than 100 metres. You’ll get all geared up with a helmet and harness in the activity shop downstairs, before heading out to a practice line that is MUCH shorter. The friendly staff will teach you how to brake (not as easy as you might think) and the best way to go down for maximum speed. A shuttle bus then takes the group to the very top of the hill, where you’ll ride a glass elevator to the top of the ski jump.

First off, take in the incredible view! You can see a huge part of the city from way up here, including a great look at downtown, and the entire hill below.

READ MORE: The best spots for photography in Calgary

You then go down to the platform two at a time (don’t look down!) before getting strapped on to the line. From there, it’s all up to you!

When you’re ready, pull your legs up and sit back in your harness, and you’ll be suspended over the entire park—then begin flyyyying down the line, reaching speeds of up to 140 km/h. In all honesty, getting started is the hardest part. I probably screamed for like, 10 seconds before even starting to move. But once you get going, it’s actually really fun! If you don’t think you can handle top speeds, the staff will open your parachute for you at the top, which will slow you down a bit. It takes about 20 seconds or so to reach the bottom, at which point you’ll be forced to brake, which includes getting into the fetal position and bracing for impact as your harness hits the stopping device. 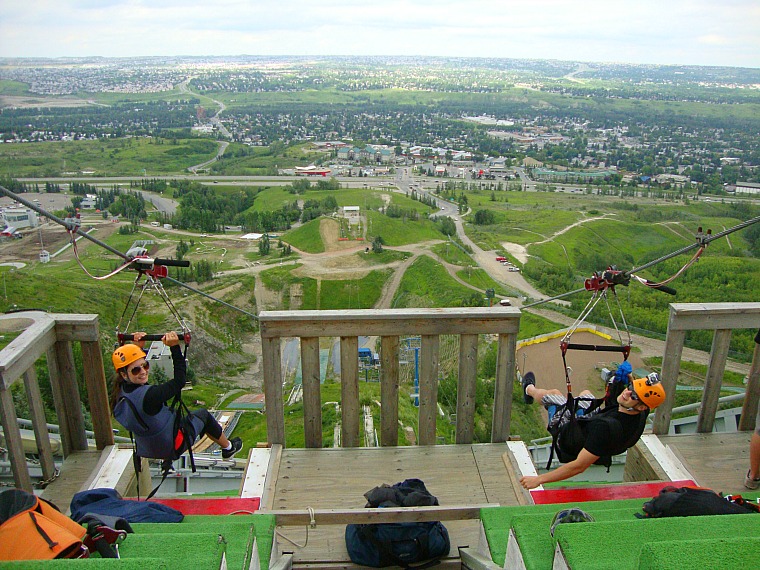 As if that wasn’t enough of a thrill, you get to do it all over again! There’s one more line (albeit a lot shorter) but the beauty of this one is that you can go down upside down. Seriously, try it!

This is the ride I was looking most forward to, as a trip down the bobsleigh track is something few people ever get to experience. Like the Jamaican bobsled team I really had no idea what I was doing, other than to keep all my body parts inside the bobsleigh. Luckily that’s all you really need to do, as an actual Olympic bobsledder was our guide down the track—not only navigating the turns, but also acting as brake man.

The bobsled fits four people plus the driver, so you will all pile in (outfitted with sturdy helmets, of course) and grip the handlebars for dear life as the driver gets the sled going. The Olympic track has 14 turns total, and the experience is similar to that of a roller coaster—but scarier. Seriously. The reason being that unless you are sitting in the front, you can hardly see the turns as you approach them, and when you’re travelling at speeds of 100 km/h while reaching 4G forces, it would be nice to have a few seconds to prepare! By the time you get about 30 seconds into the ride, you are going so fast that you actually can’t scream, otherwise you could bite your tongue. The entire ride takes about a minute and a half, so it’s incredible to think that Olympic-calibre racers whip down the track in nearly half the time!

WATCH: Our trip down the bobsleigh track

Don’t attempt the ride if you are pregnant or suffer from back or neck pain, as you will get tossed around a bit. One thing to keep in mind is that the bobsleds have the capability to mount a GoPro, so bring yours if you have one! 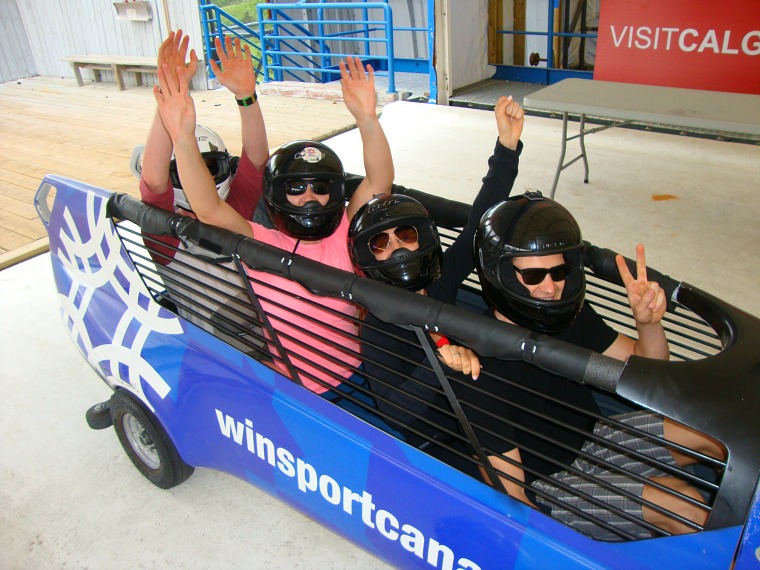 The best way to describe the Skyline Luge is that it’s like the Nintendo game Mario Kart, but in real life.

Riders climb into a little go-cart-like contraption that looks like a luge with a bike handlebar on it, then zoom down a two kilometer track that winds down the entire ski hill. After purchasing your tickets at the bottom of the hill, you jump on a specially-outfitted chairlift which also brings all the luges up. Jump off at the top, before queuing up for a quick tutorial from the staff about how to steer and brake. Then, you’re off to the races!

I have to admit that it doesn’t look like much when you’re watching, but actually riding the Skyline Luge is a whole different story. First off, you go WAY faster than you might think, and feel like you’re driving a Porsche as you’re so low to the ground. As you navigate the many twists and turns, you can race your friends down the track, or play it safe if you’re with your family. The great thing about this activity is it’s good for all ages, and kiddies can sit on the same luge as their parents. You may feel a bit dizzy after, as you hit all the turns quite fast and feel the vibrations from the concrete below.

Price: A single ride will set you back $12, but gets cheaper the more you do. 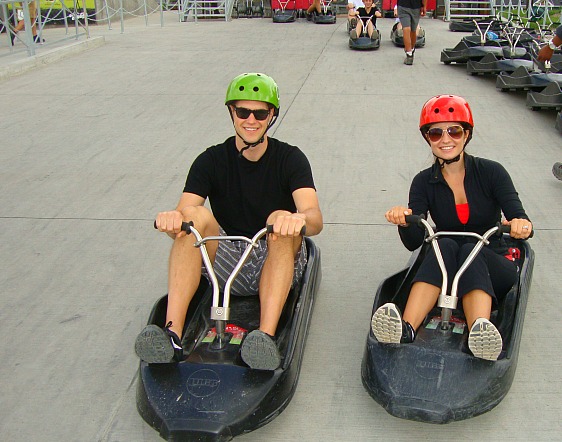 What to wear: Make sure you wear ‘active wear’ gear if you plan on doing the bobsleigh or zipline, as you’ll want to be comfortable. Also, wear running shoes, as if you wear sandals they’ll likely fly off as you head down the zipline!

How to get there: COP is located in northwest Calgary, just off the Trans-Canada Highway. Click here for driving directions.

When to go: Aim for a sunny day, as things like mini golf are no fun in the rain. Activities are seasonal, so they typically run from July to September, 7 days a week.

A grown-up tea party: Afternoon tea at the Fairmont