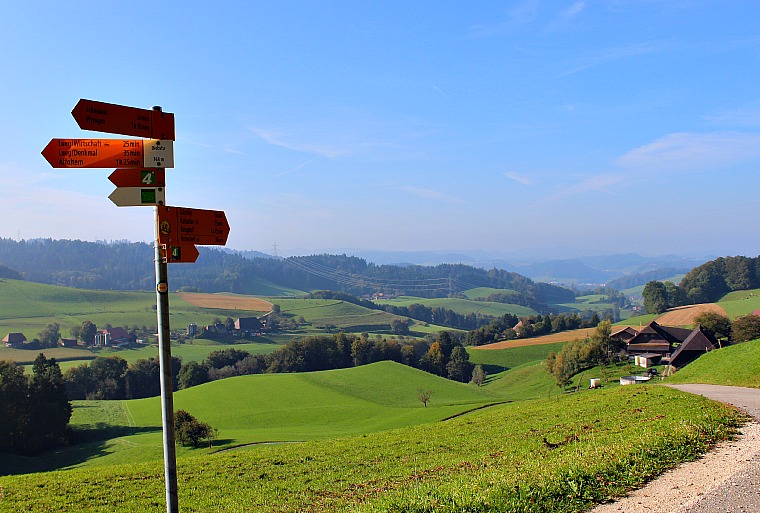 The distant clanging of cow bells was the only sound as we leisurely pedalled past miles of serene countryside. Surrounded by rolling hills so green they could belong on a golf course, well-kept farmhouses, corn fields and the looming Alps sprawled out before us. This was what we came for. This was the Emmental.

Nestled in the heart of Switzerland less than an hour from cities such as Bern and Lucerne, the Emmental region is most famous for its cheese production. Yes, that stuff we commonly call ‘Swiss cheese’ is actually called Emmentaler cheese, and this is where you can find it in its golden glory. A fantastic way to explore the area is by bike, which is how we found ourselves enjoying an e-Bike tour along the Emmental Cheese Route on a crisp fall day. 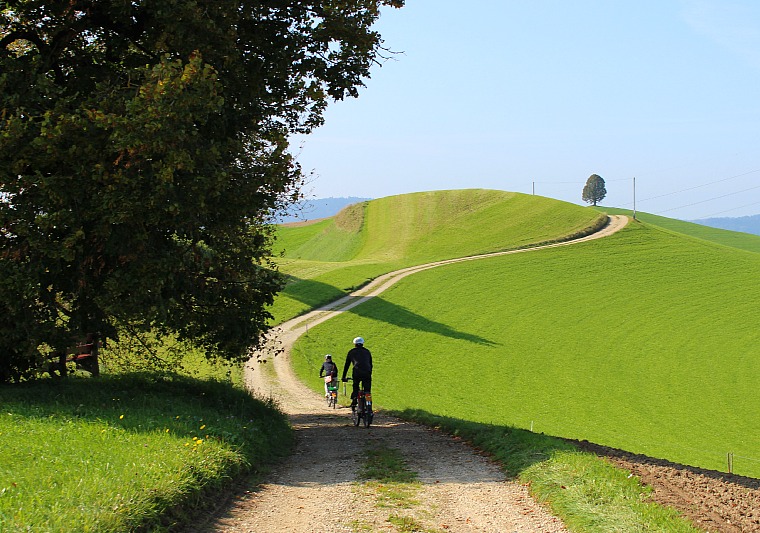 E-Bikes are like a normal bicycle other than that there’s a motor attached, meaning cyclists can choose to pedal as usual or turn on the motor while navigating hills or speeding up. While an e-Bike is not necessary to navigate the Emmental, it’s nice to have the option—especially after enjoying a long lunch with a couple glasses of wine. 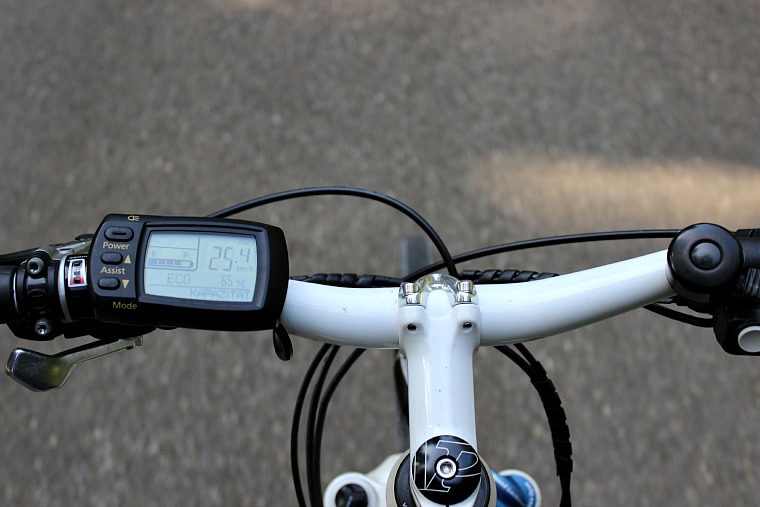 Setting off from the beautiful town of Burgdorf, we found ourselves pedalling in the shadow of the town’s cliff-top castle as we headed towards a quiet pathway lining the winding river. Though we did pass the odd vehicle or other cyclist, it felt like we were all alone exploring the peaceful Swiss countryside.

A short time later, we found ourselves at the first road crossing, meaning it was time to pull out the smart phone to find our way to the cheese. Yes, there is an app for that. Those who tour the Emmental cheese route can download a free app which not only points them in the right direction, but also has an audio guide sharing information about the many points of interest along the trail. 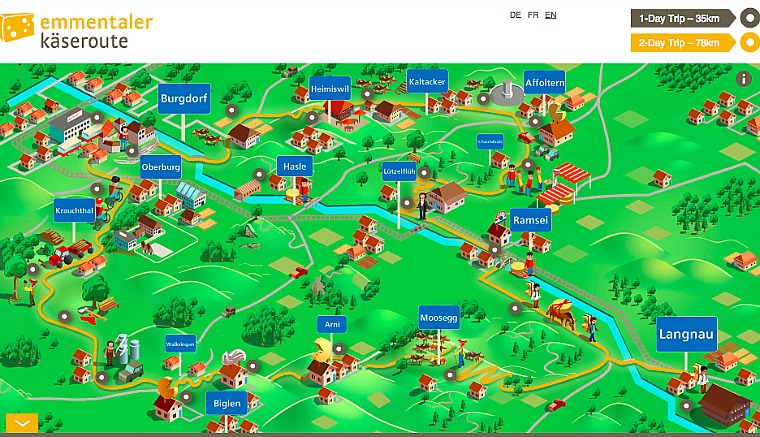 Since the tour is self-guided, it means you can do things like stop at a 300-year-old farm to pet the animals, or high-tail it to one of the most scenic spots on the entire route: the Lueg Monument. 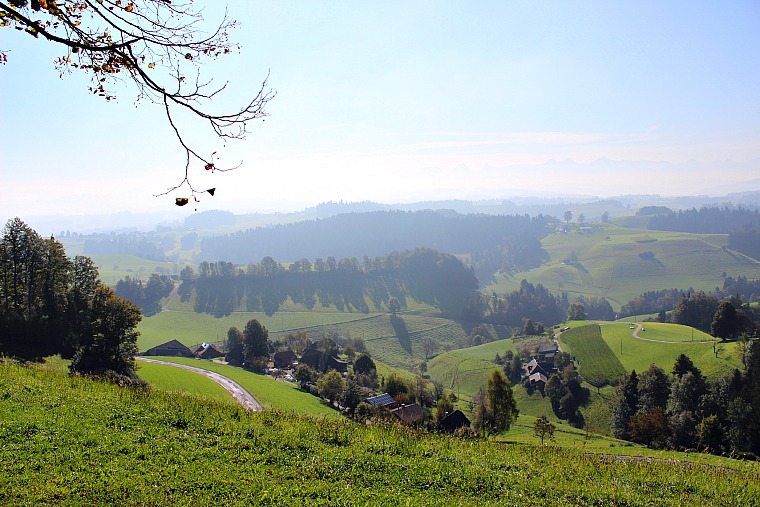 First a warning: to get to the Lueg Monument you will have to navigate a freakishly steep hill. But the five-minute breathless hike up is worth it when you get to the top and take in a panoramic view of the lush valley spread out below, framed by the majestic Alps. Lueg is a popular stop not only for the view, but to see the monument dedicated to the Swiss cavalry. There is also a lovely picnic area which is a great spot to enjoy a mid-ride snack. 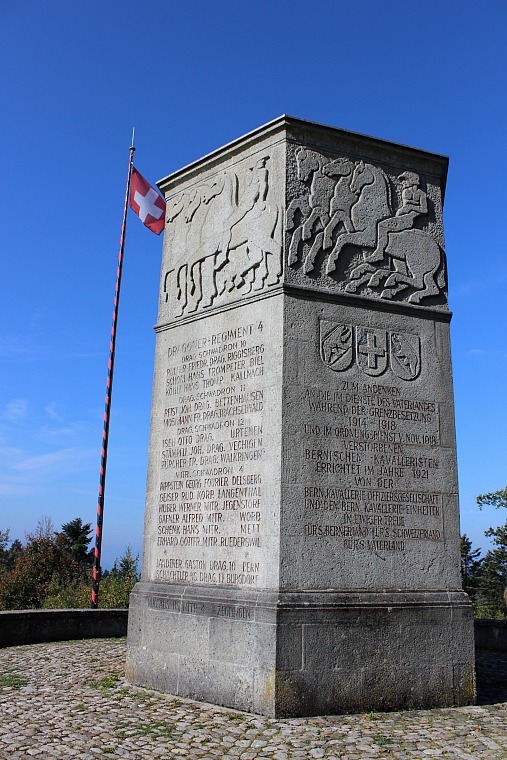 From there, riders continue along the route through tree-lined paths, passing traditional farmhouses nestled into the hillsides, crops and an entertaining array of animals including sheep, cows and pigs. 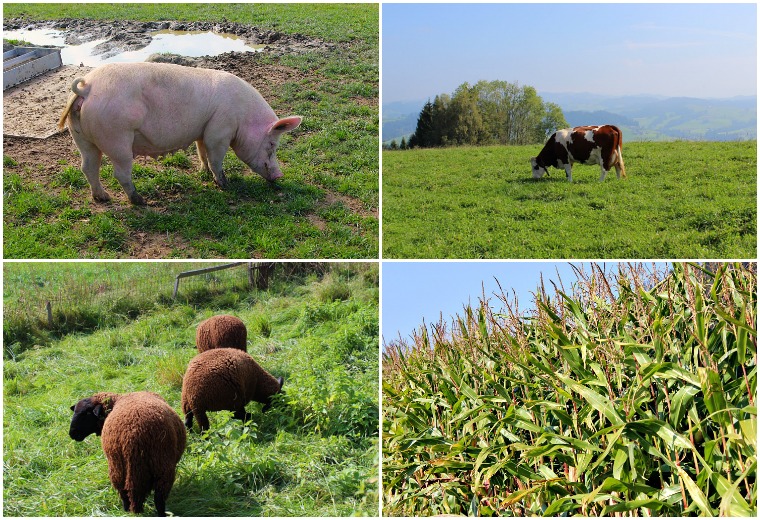 Just as our tummies began to growl, we pulled up to the Emmentaler Show Dairy (Emmentaler Schaukaserei), which can only be described as a place where you feel like you’re going back in time. The storybook-like buildings on site were perfectly kept and had bright flowers bursting out of the windows, and the delicious aroma of fresh baked bread and pastries spilled out from a bakery. Children’s laughter filled the nearby playground, and cows could be heard mooing in the distance. 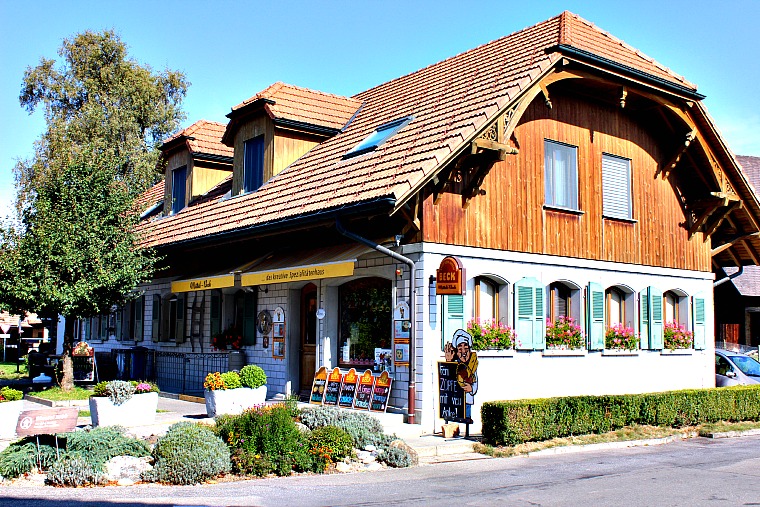 A bakery in Switzerland’s Emmental region.

Even if you’re not a cheese fan, the dairy is worth a trip solely to get a glimpse of what life used to be like in Switzerland. After being greeted by a guide, we were escorted into a centuries-old herdsman’s cottage which still serves as a place to make cheese the old-fashioned way. Under an expert’s watchful eye, groups can make their own batch over an open fire, and the dairy will store it until the cheese is properly aged and can be sent back to them months later.

From there we continued into other buildings to see the evolution of the cheese-making process, which culminated with a visit to a modern-day production facility which is decidedly more high-tech than that aforementioned open-fire. Rows upon rows of aging, sweating fromage were on display, still maturing to the point where they could be sent out to be consumed by wine-swigging revellers at dinner parties. We were even treated to some different blends to sample (note to self: I am not a fan of the expensive aged cheese!) before heading upstairs for lunch. 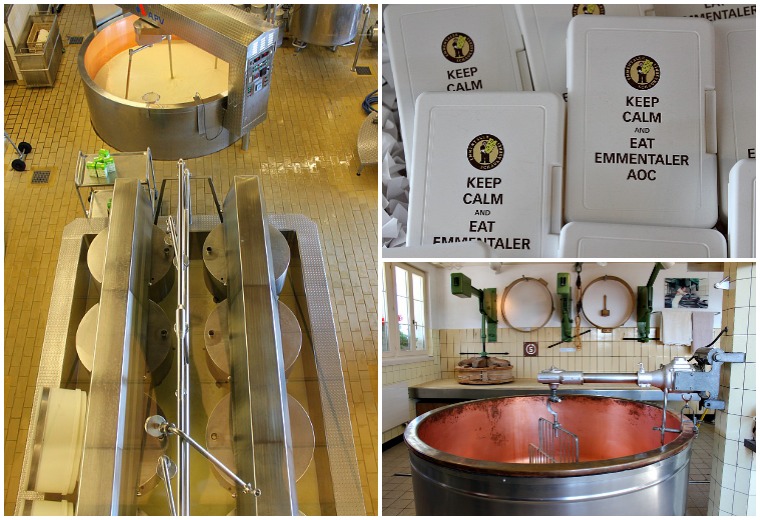 Now here’s where I got to cross something off of the bucket list: enjoying fondue in Switzerland. Trust me when I say Emmental is THE place to order a steaming pot of cheese foundue! While not traditionally something I would recommend for someone only halfway through an hours-long bike ride, the opportunity was just too good to pass up. 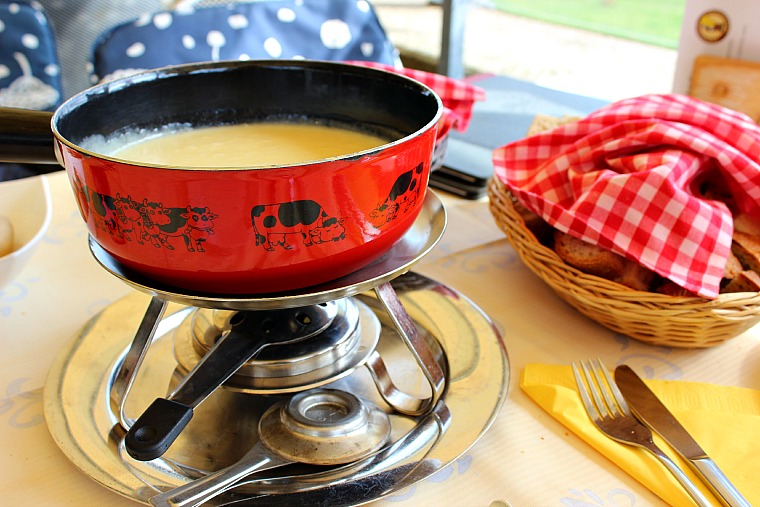 So, after eating what might have been the equivalent of a loaf of bread and block of cheese washed down with a glass of crisp white wine, I somehow waddled back to my e-Bike for the last leg of our journey in a cheese-induced coma.

Fortunately the final hour was actually quite relaxing as we cruised along the quiet trails, with every curve in the road treating us to a new view of a valley, mountains or picturesque village. 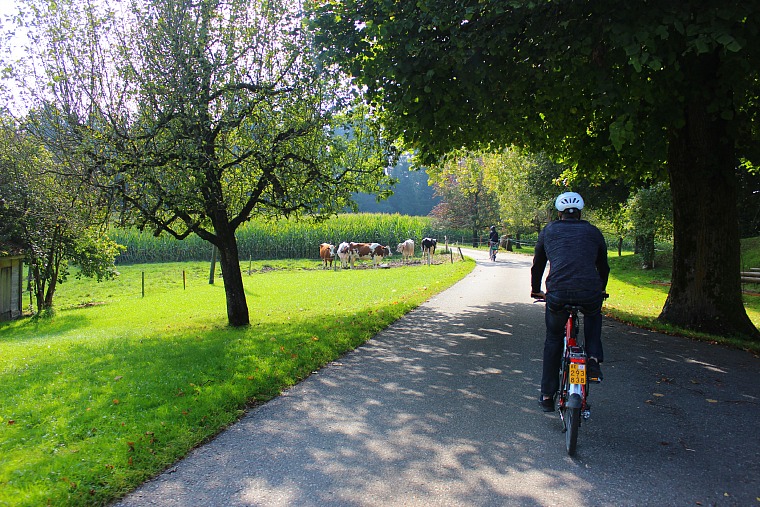 Then just like that, we found ourselves back in Burgdorf. Cycling through the medieval town we stopped to take in an incredible vantage point from the castle, bringing an end to an unforgettable day along the Emmental Cheese Route.

For the record, I did not need to eat dinner that night! 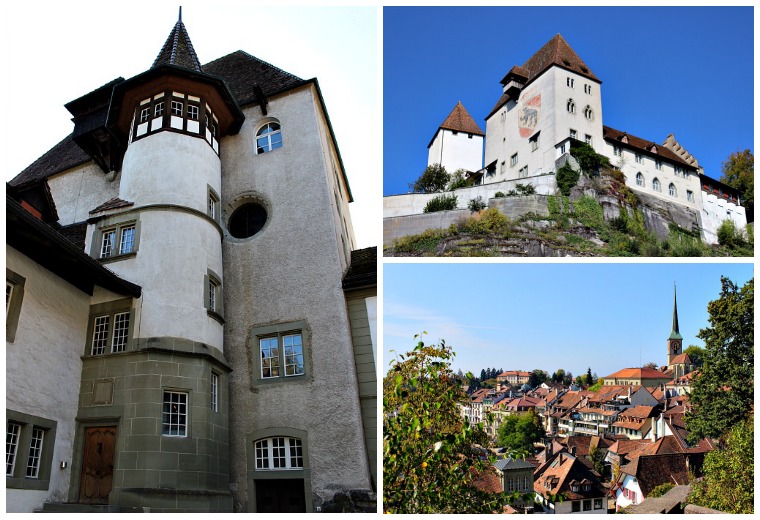 Where to go: Most tours start in Burgdorf, and the e-Flyer bikes can be rented near the main train station where the tourist office is.

Cost: Bike rental prices range depending on where they’re picked up/returned, the type and how long it’s being rented for. However, the average e-Bike is 38 CHF for half a day or 54 CHF for a full day.

Time: Budget a day for the whole 35 kilometre tour, which can be done as quickly or slowly as you like. It took us about five hours at a decent pace, including time to tour the entire dairy and enjoy a leisurely lunch. There is also a two-day route option.

The best of Bern, Switzerland- including that bear pit!

How to plan the perfect ski weekend in Zermatt, Switzerland

Globe Guide travelled to Switzerland in partnership with My Switzerland and Emmental Tourismus. As always, hosts have no editorial influence on articles. 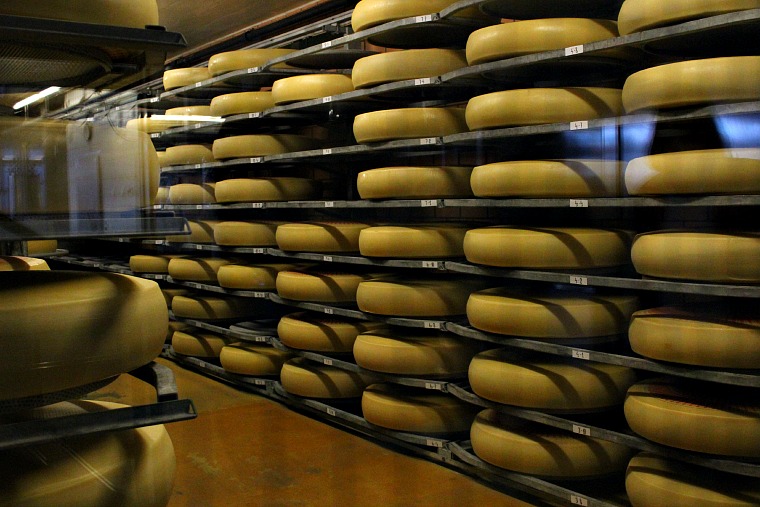