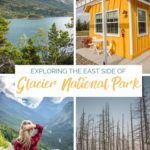 As our car snaked down the darkening highway winding through the east side of Glacier National Park, a trio of red tail lights suddenly lit up the road ahead of us.

We slowed to a stop behind them and scanned our surroundings, aware that there’s usually only one reason that traffic comes to a dead halt around these parts: an animal sighting. 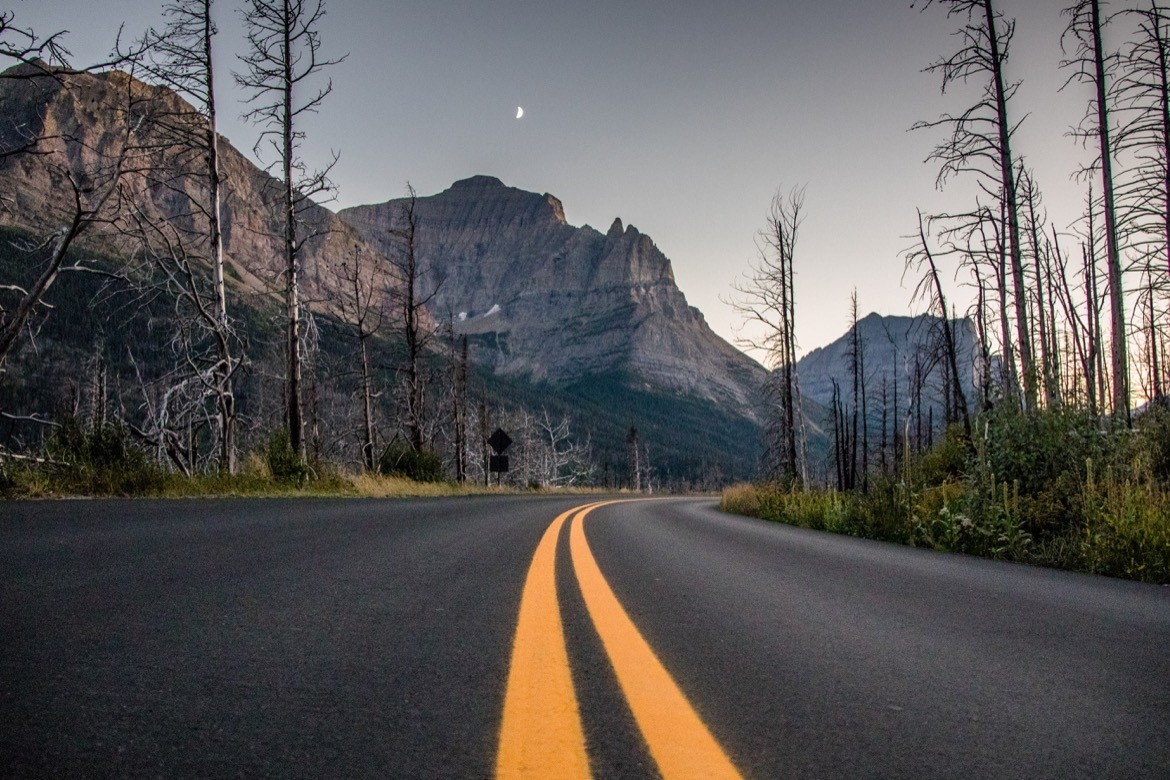 On our left was a steep cliffside covered with the spindly skeletons of trees charred by a forest fire, creating a silhouette against the sky’s soft tones as dusk settled over the valley. To the right was the deep blue St. Mary Lake, looking smooth as glass now that the boats had docked for the night. All seemed still, until a rustle in a nearby bush edging the shoreline caught our attention.

Much to our amazement, a large black bear emerged and began meandering down the beach straight toward the boat launch, seemingly unaware of our small group perched nearby staring in awe from the safety of our vehicles. It was one of those spellbinding, only-in-Montana moments that makes exploring Glacier National Park so incredibly special. 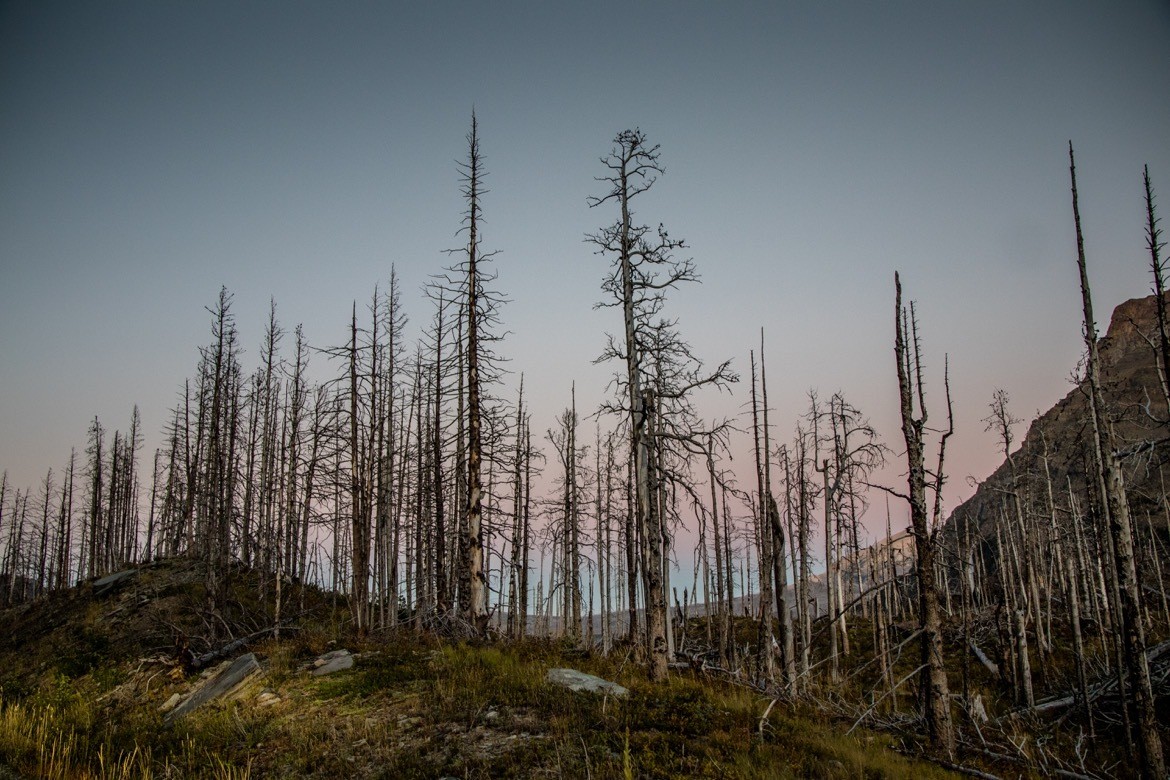 Our couples getaway had started a day earlier with an easy, three-hour drive from Calgary to the tiny mountain village of St. Mary, a great vacation spot best known as the eastern gateway to the iconic Going-to-the-Sun Road.

The stunningly-scenic 50 mile highway cuts through the park, affording jaw-dropping views of glaciers, soaring peaks, alpine meadows and waterfalls bursting out of huge boulders. The highlight for many is arriving at Logan Pass, where the summit has an elevation of 6,700 feet and straddles the Continental Divide; it’s also the starting point for the popular hike to Hidden Lake. 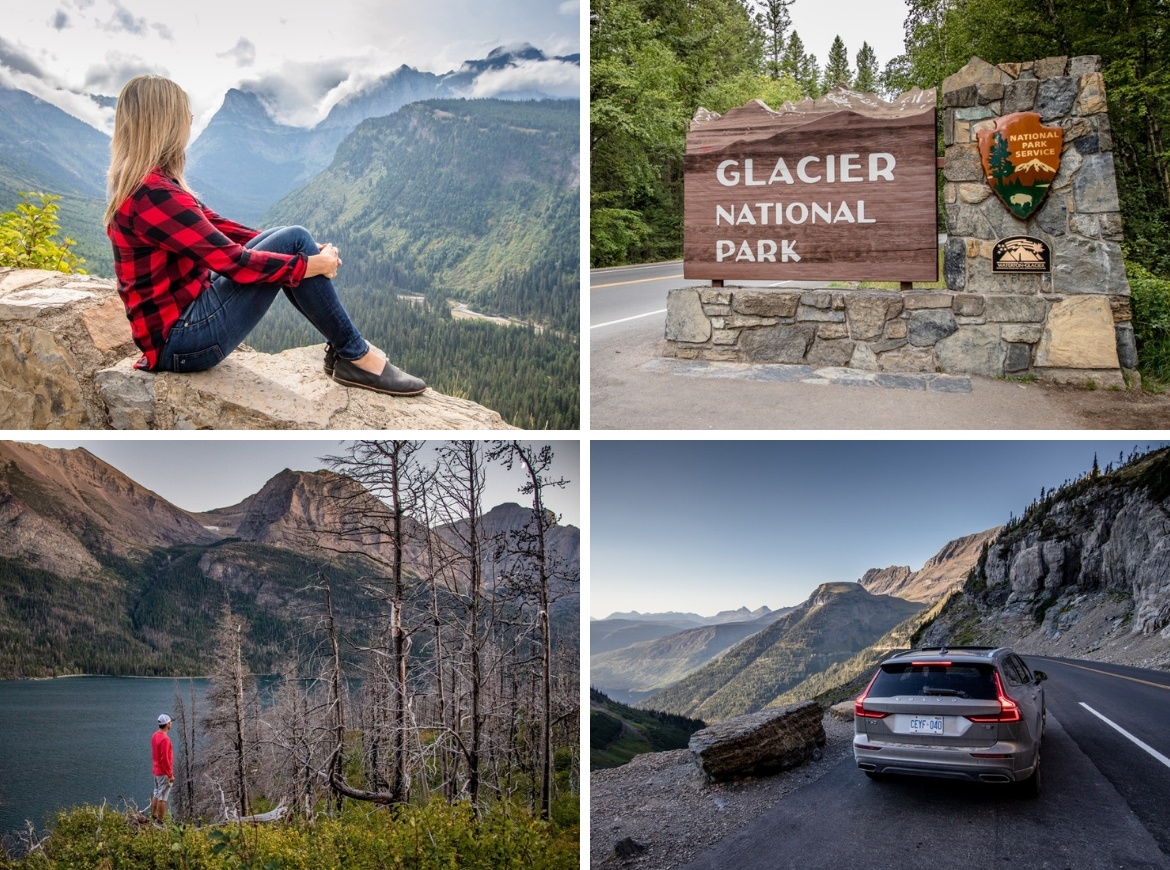 Going-to-the-Sun could easily be billed as one of the world’s best drives thanks to its other-worldly vistas–though its steep, hairpin turns command concentration from drivers which is sometimes easier said than done when the breathtaking surroundings are this distracting. 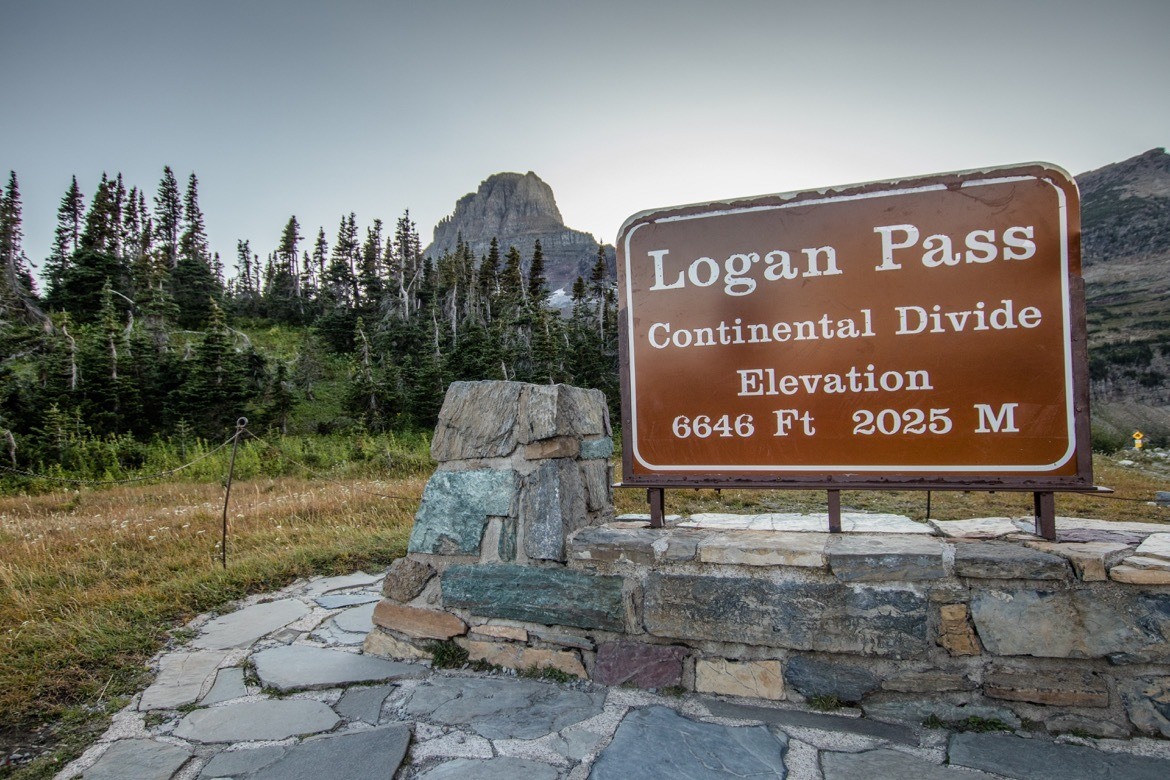 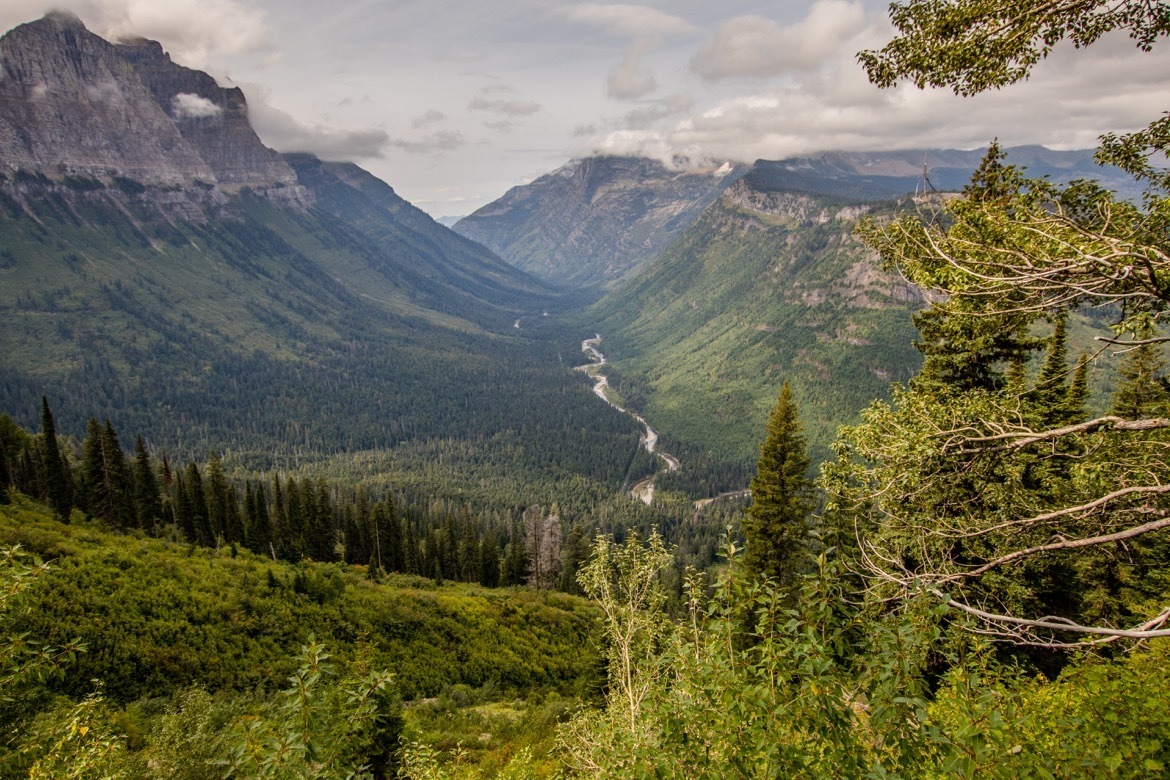 As soon as we pulled into St. Mary, it was clear this charming spot was the perfect base for a stay in Glacier National Park. Anchored by the St. Mary Lodge and Resort, there are souvenir shops, a gas station, places to book excursions throughout the park, and ample dining options including restaurants, cafes and a grocery store.

But what really got us excited were the tiny homes–specifically an effortlessly adorable, sunshine-yellow house complete with a window box overflowing with flowers. 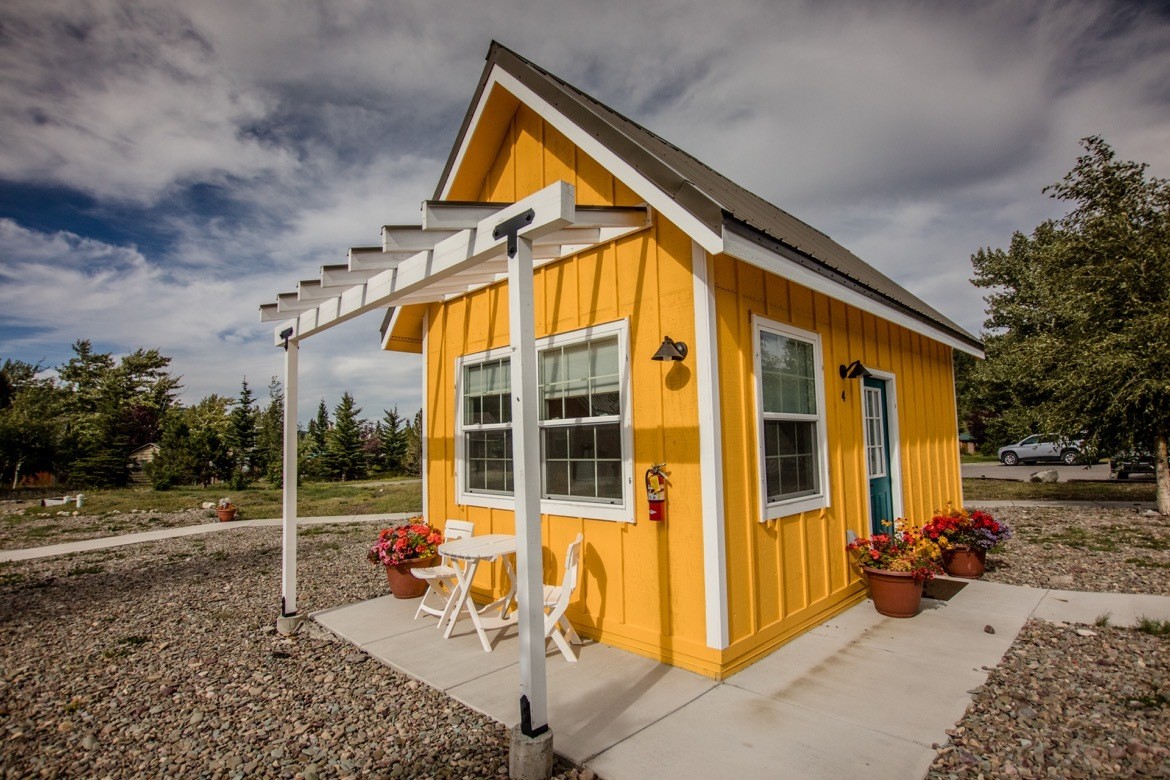 Sneaking a peek through a large window, we could see the interiors were light and airy, boasting a kitchenette and separate living area which is ideal for longer stays.

Despite their moniker, these accommodations are anything but tiny and have plenty of space for up to four people. Best of all, they’re framed by a backdrop of the Great Plains meeting the Rocky Mountains with glistening St. Mary Lake in the foreground, and had me dreaming about starting the day with a steaming mug of coffee in hand, soaking in the scenery from the private patio. I made a mental note to reserve one of these beauties the next time I found myself planning a trip to Glacier National Park. 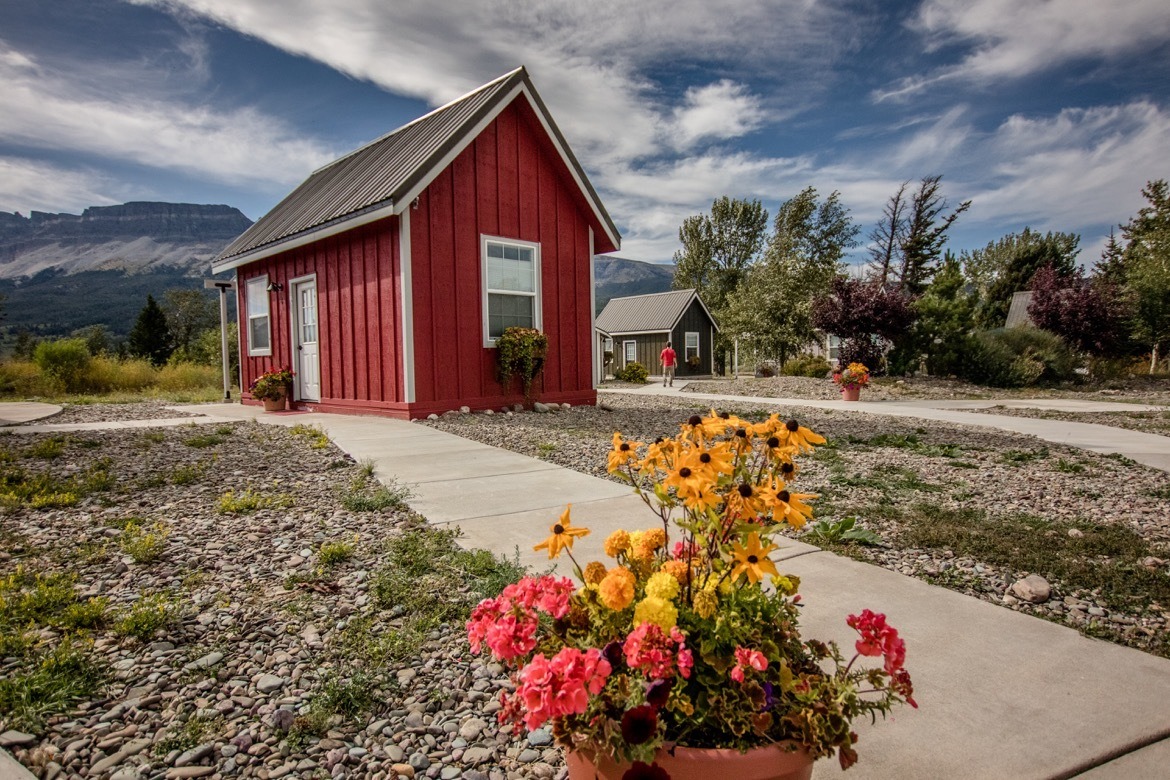 However, on this particular trip we had our sights set on a spot further south called East Glacier Park. Home to a blink-and-you-might-miss-it stretch of burger joints and motels, the village’s crown jewel is the historic Glacier Park Lodge, which is the most popular option for lodging near the Glacier National Park east entrance. 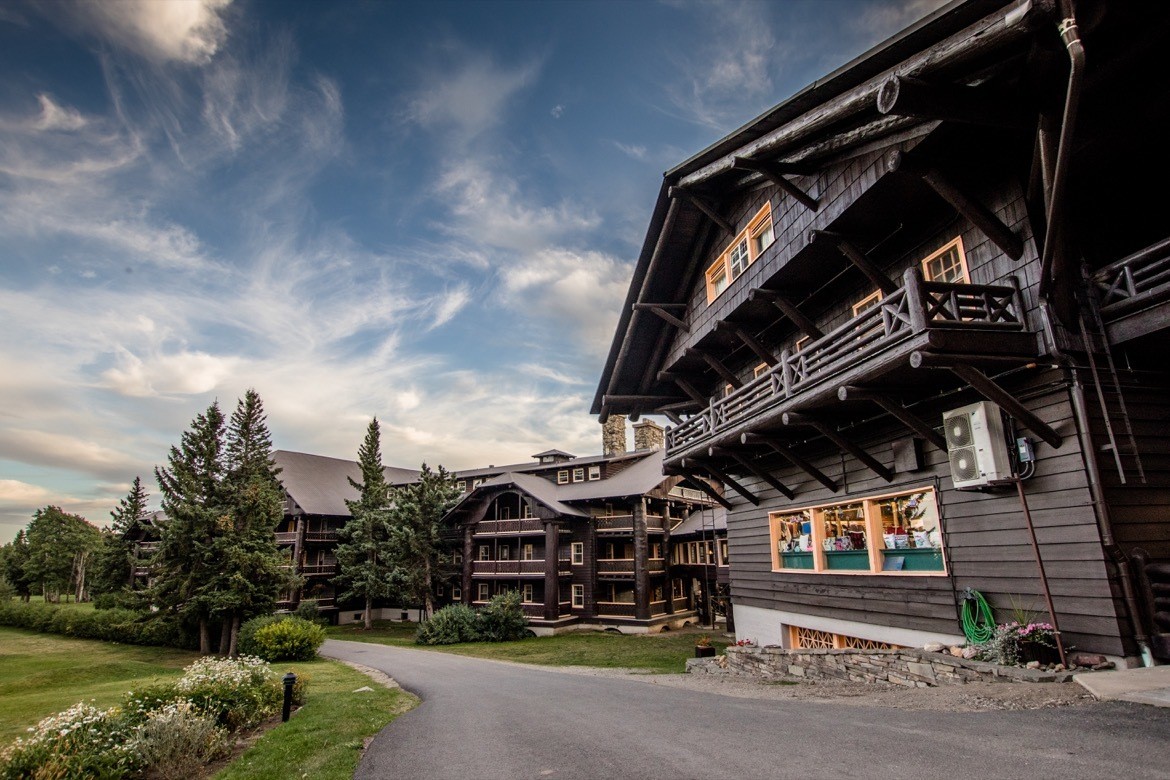 Built in 1913 by the Great Northern Railway to complement the railway depot (the Amtrak station is found just across the street), the lodge was constructed on the Blackfeet Reservation and opened to much fanfare. Beloved for its sky-high ceilings, expansive grounds and on-site amenities like an outdoor pool and golf course, it’s a great option for tour groups and families, with more than 160 guest rooms to accommodate about 500 people.

Besides its convenient location near the park, Glacier Park Lodge is perhaps best known for its timber frame construction, which saw towering columns chiseled out of Douglas fir and red cedars which were an estimated 500-800 years old, leading the Blackfeet tribe to nickname it ‘Big Tree Lodge.’ 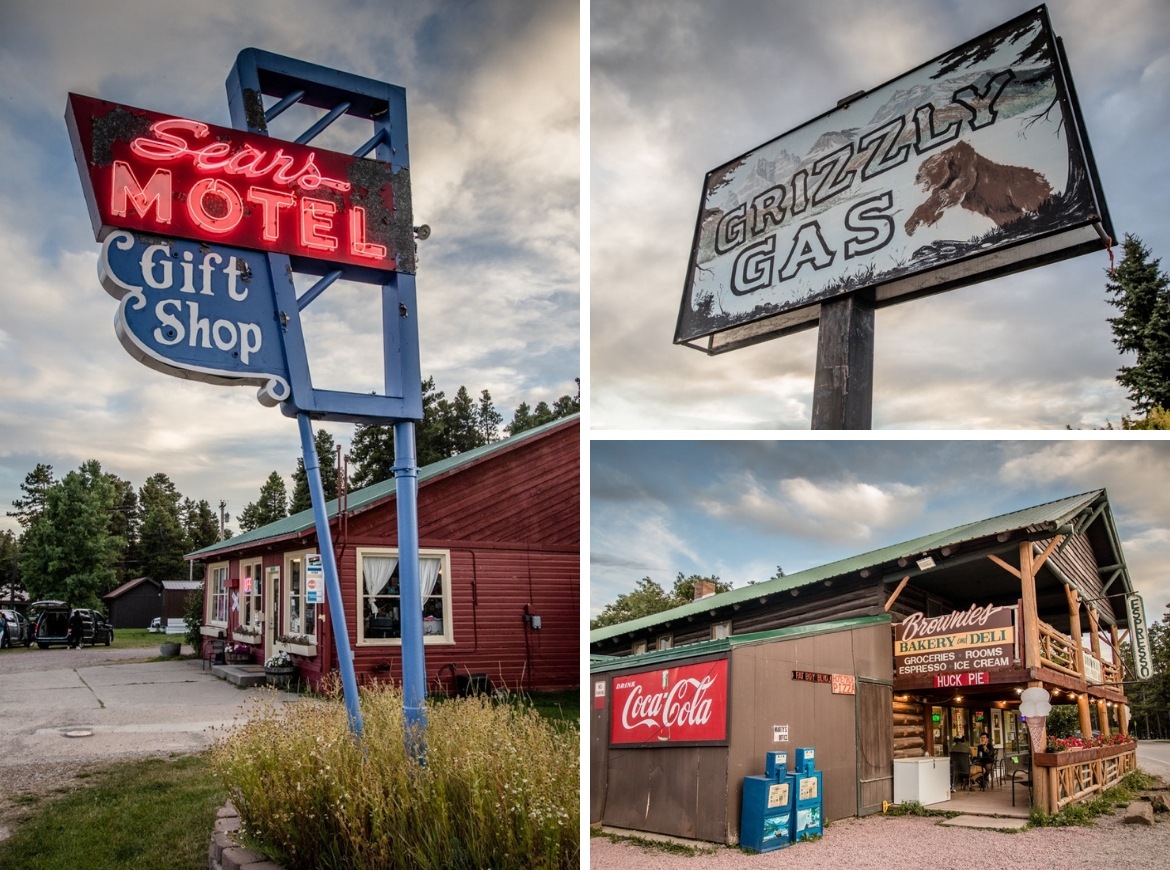 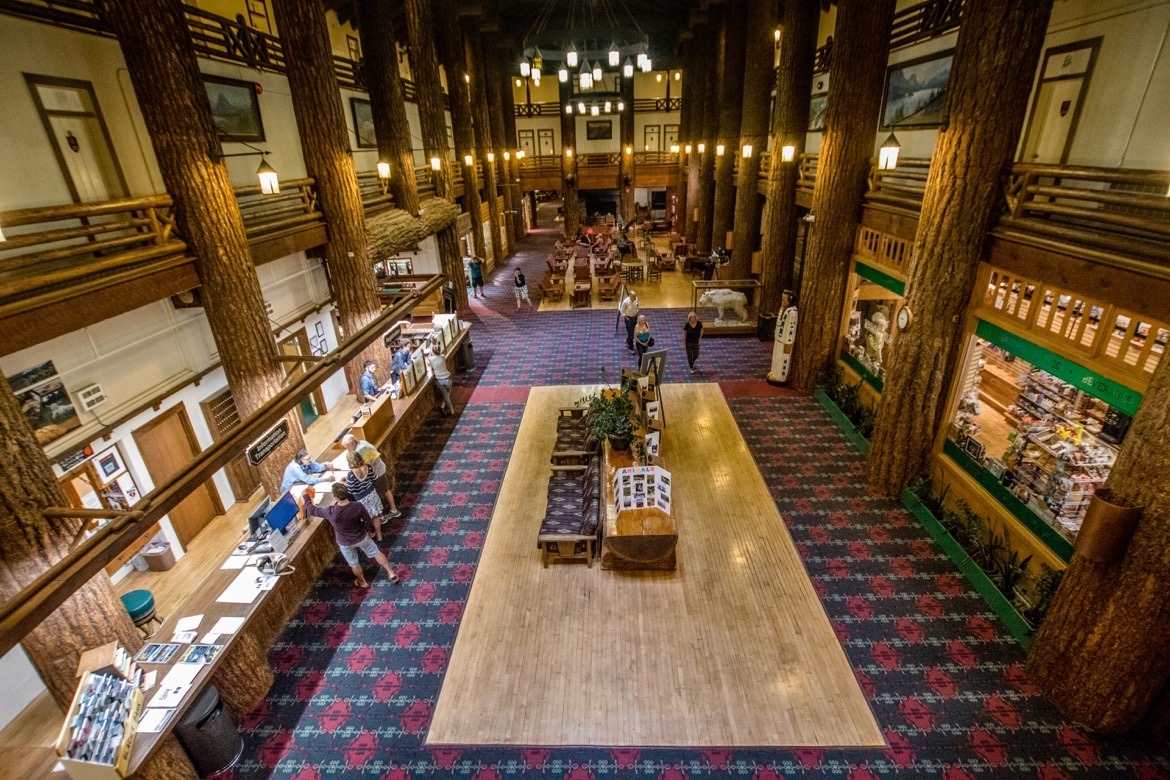 While West Glacier is more developed, being based on the east side means less crowds and quick access to areas like the spectacular Two Medicine valley. Located in the southeast section of the park a couple hours away from the Going-to-the-Sun Road, very few visitors head down this way which makes it a treat for those who make the effort during the otherwise busy summer months.

Excited by the idea of having its lakes and peaks mostly to ourselves, we fueled up on a breakfast of huckleberry-topped pancakes in town then hit the road for the quick, 10-minute drive to the east entrance to kick off our Glacier National Park adventure.

RELATED: This is why you’ll want to go camping in Glacier National Park 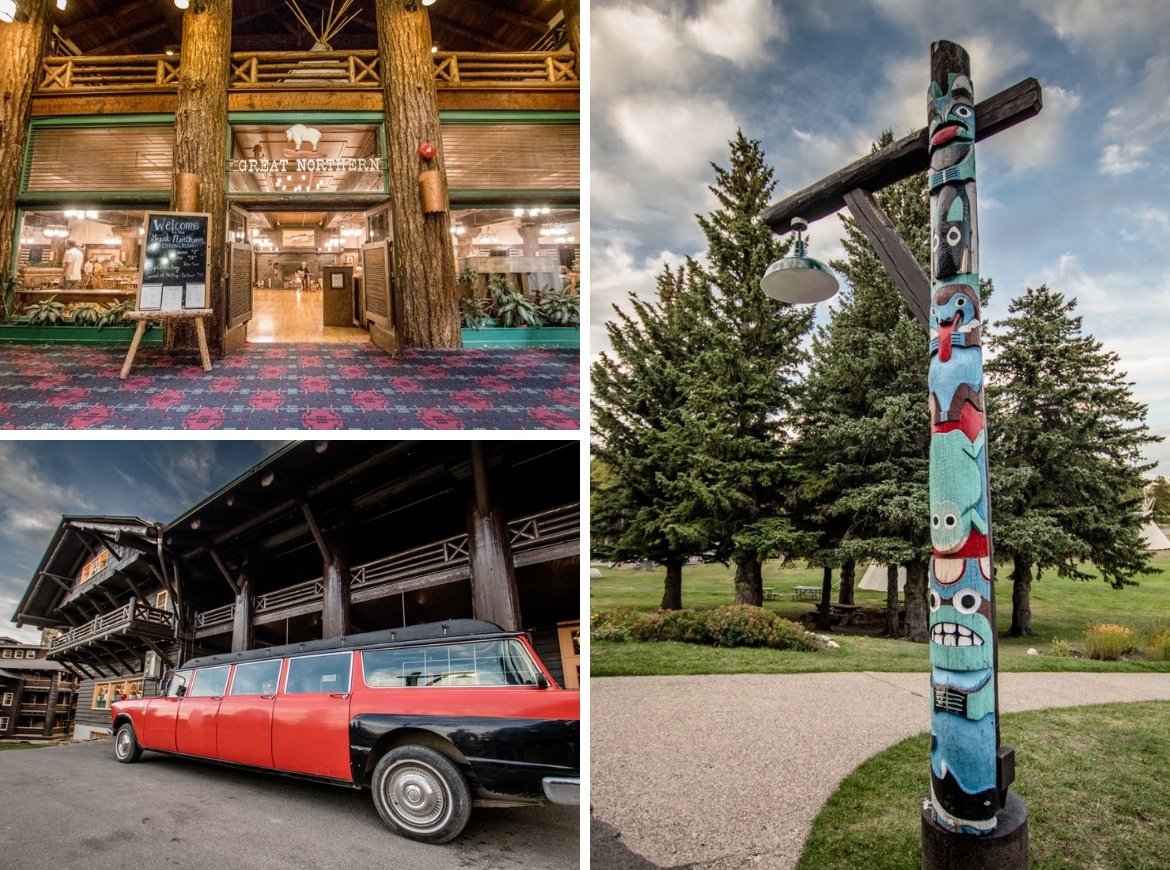 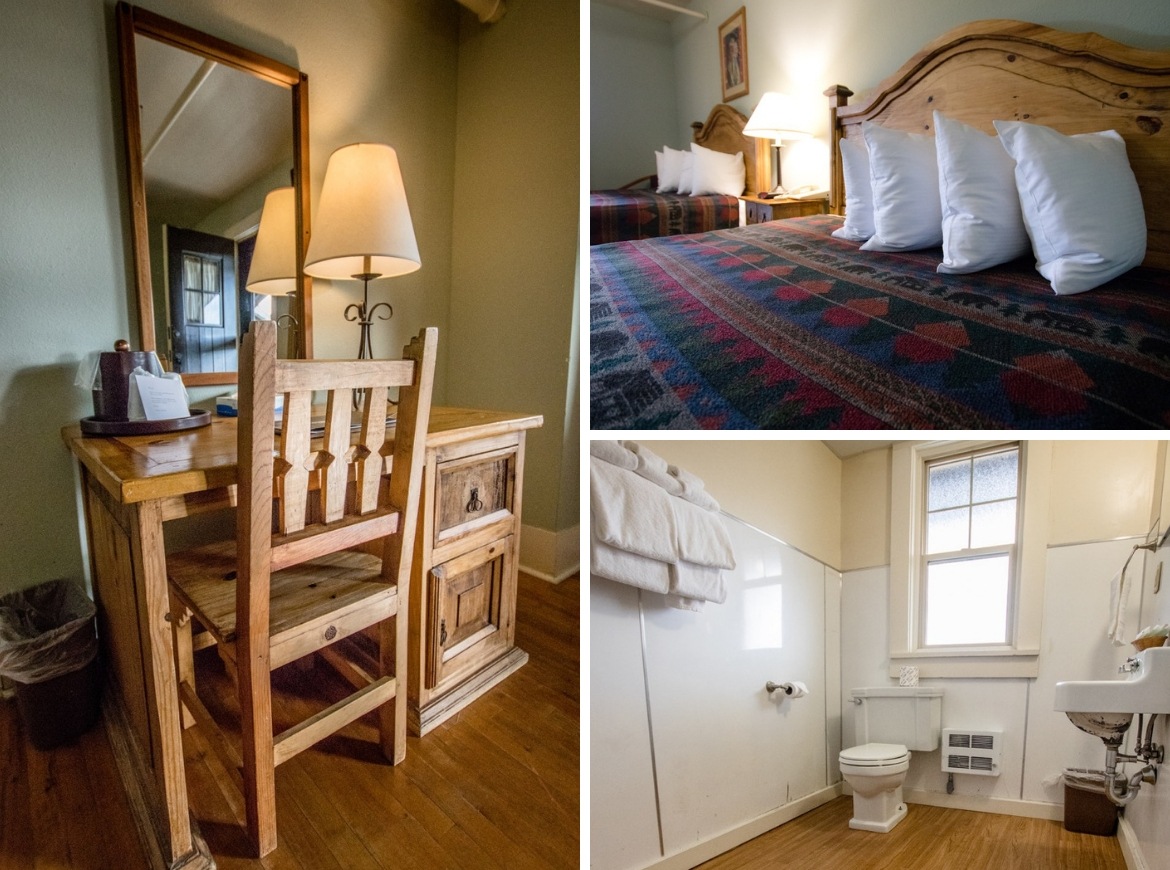 A room in Glacier Park Lodge

What to do in Glacier National Park

Our first stop was Two Medicine Lake, which is beautifully framed by Rising Wolf Mountain and a favourite spot of kayakers and hikers.

Two Medicine was traditionally popular with park visitors arriving by train, who would then travel on horseback to spend the night in a rustic chalet or tipi in the backcountry. Once Going-to-the-Sun Road was built visitation dropped, and it’s now considered a bit of a hidden gem. The area can be explored by foot, but most opt to take a scenic boat cruise across the lake to get dropped off at the trailhead leading to Twin Falls and Upper Two Medicine Lake, which shaves about six miles off the hike. 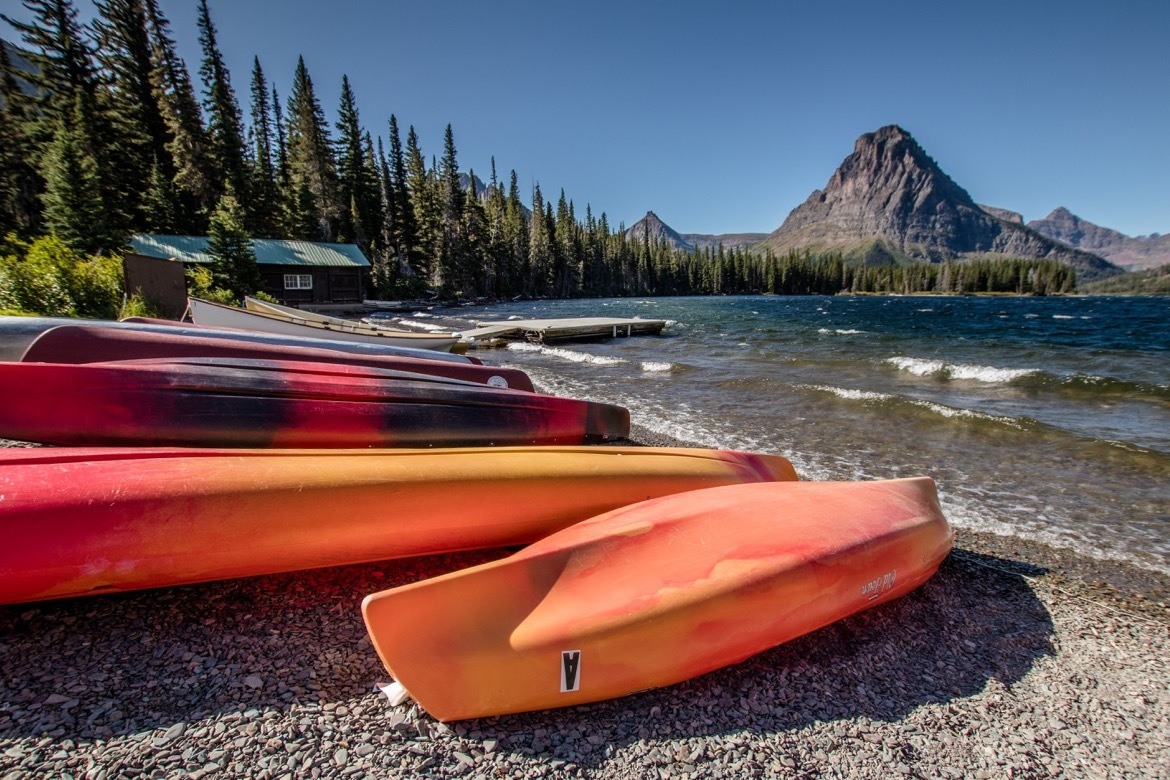 Pulling into the parking lot just in time to make the 11 AM sailing, we hopped into the historic vessel Sinopah which was built in 1926 and is the oldest wooden boat in Glacier Park Boat Company’s fleet. Our young, witty captain kept us entertained with commentary about the park en route, pointing out spots like Paradise Point which is a favourite hangout for the local moose who enjoy munching on willow found along the shoreline.

The old growth forest hasn’t seen a fire since the early 1900s, and its thick brush attracts wildcats including lynx and mountain lions. At one point we headed out to the bow to soak in the reflection scene, inhaling the fresh mountain air as a strong wind whipped through our hair. 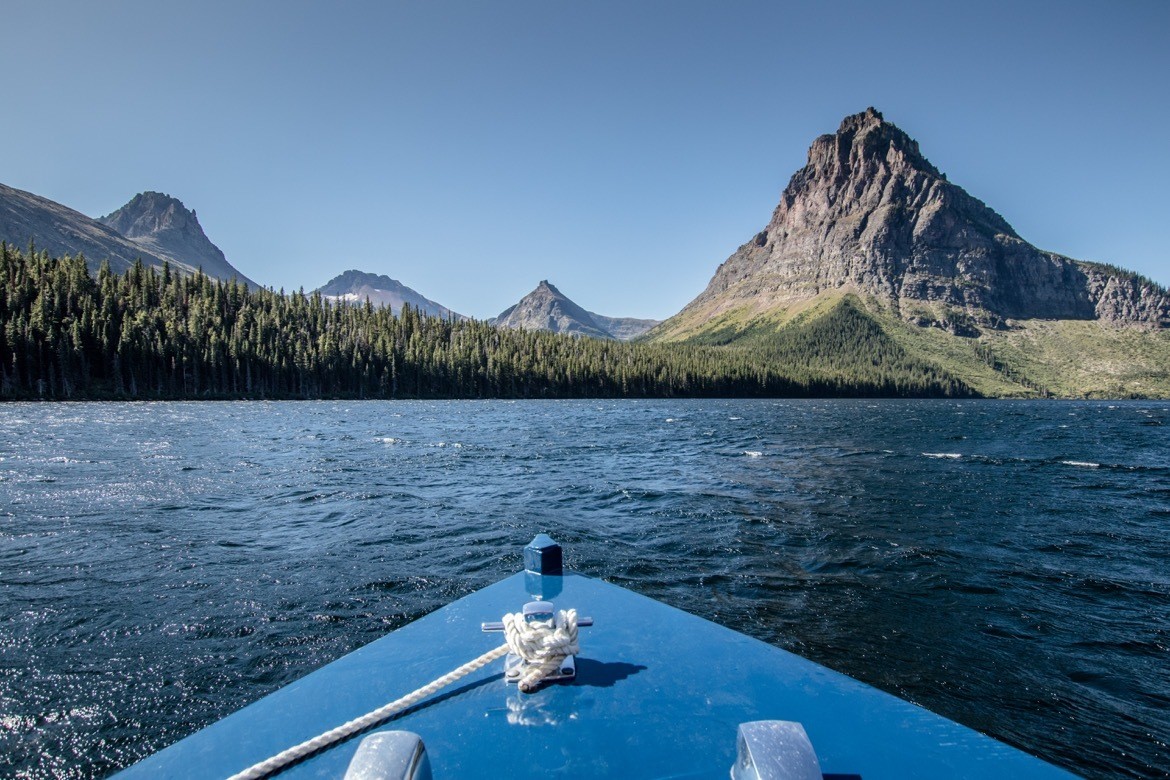 Docking at the upper west shore about 20 minutes later, some guests opted to stay on board content with what they’d been able to see from the water. Determined to see as much of Two Medicine as we could before a return sailing scheduled later that afternoon, we disembarked and set off at a brisk pace down a wooden boardwalk in search of some mountain magic. 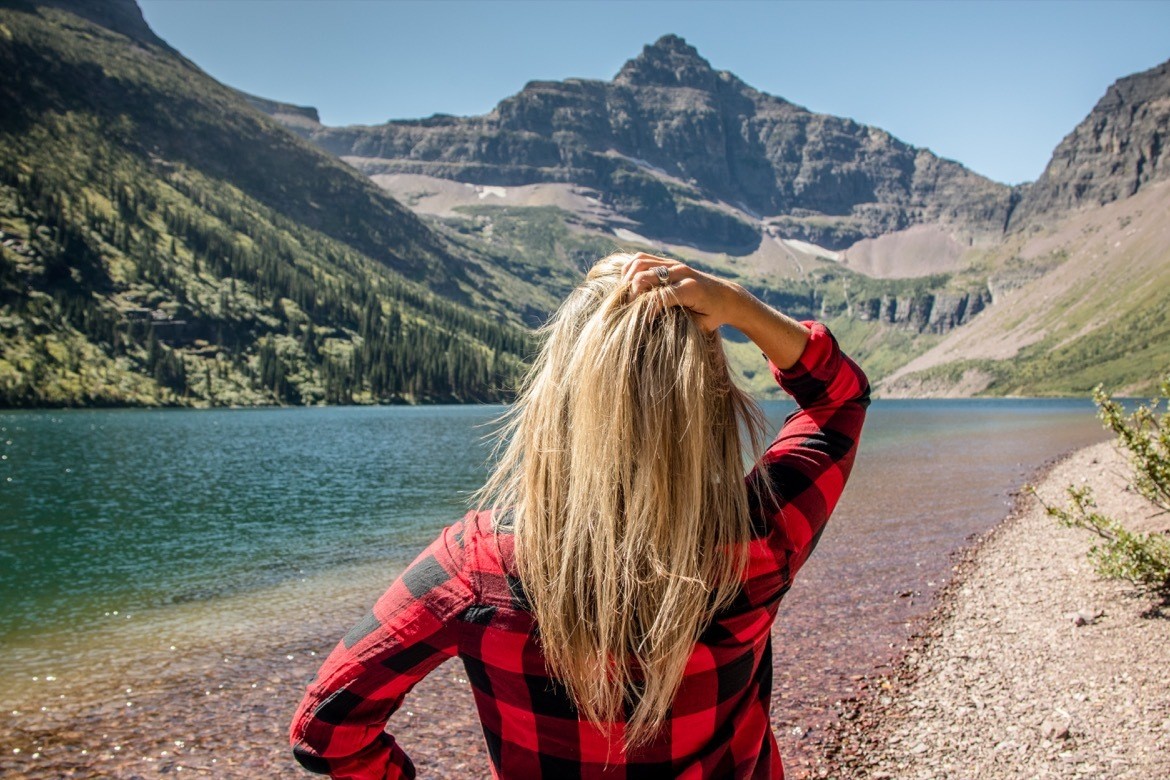 Over the next couple of hours we passed through thick forests, meadows bursting with pink, purple and yellow wildflowers, over lazy streams and past steep cliffs where nimble-footed bighorn sheep perched perilously high over the valley. At Upper Two Medicine Lake we marvelled at Lone Walker Mountain which towers over the glacial valley, and cooled off with an exhilarating dip in the chilly alpine lake.

On the way back down we made a slight detour over to Twin Falls where a pair of double cascade waterfalls tumble out of the mountainside into a serene pool of water, before arriving back at the wooden dock to hop on the boat back across the lake. 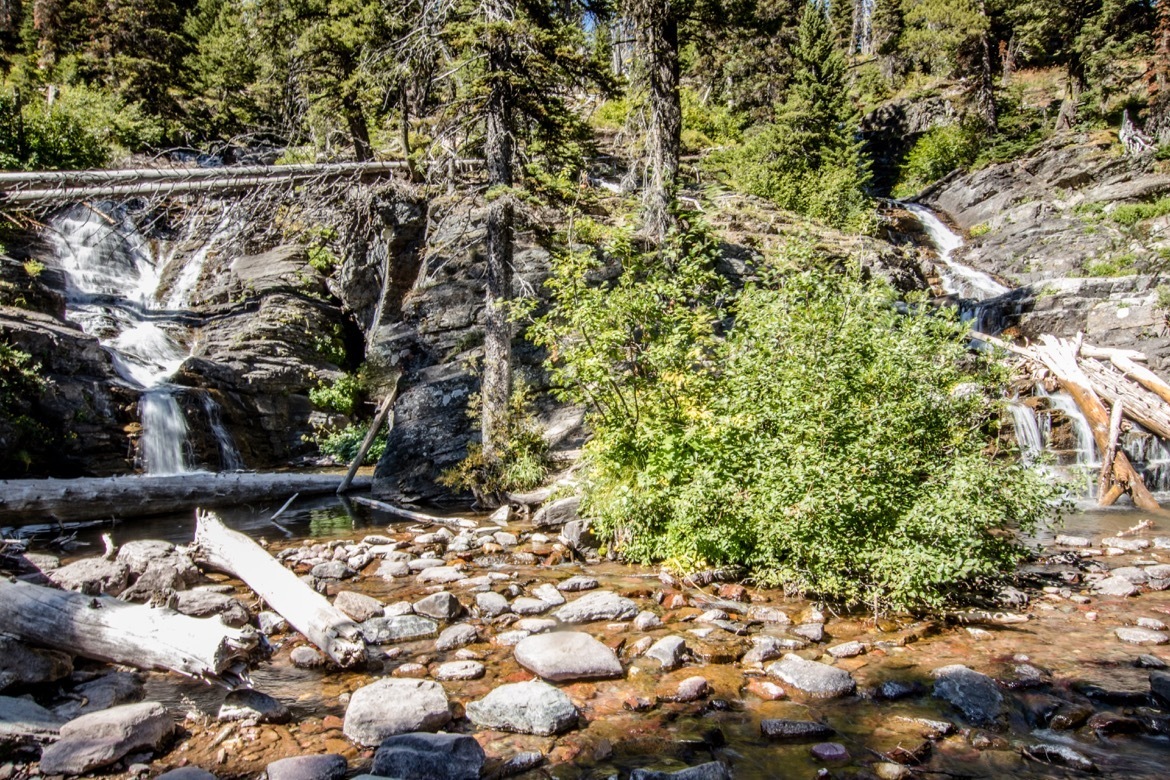 Arriving back at the parking lot, we glanced at our watches. Four o’clock. Most people in this situation would likely head back to relax at the lodge, perhaps enjoying happy hour then a long leisurely dinner before resting up ahead of another day of adventures. But we were in Glacier National Park, with sunset still hours away, plenty of epic terrain still unexplored, and the iconic Going-to-the-Sun Road tantalizingly close by. Who needs food anyway?

With that, we hopped back in the car and sped off, giggling with excitement at the thought of a whole new spontaneous adventure. 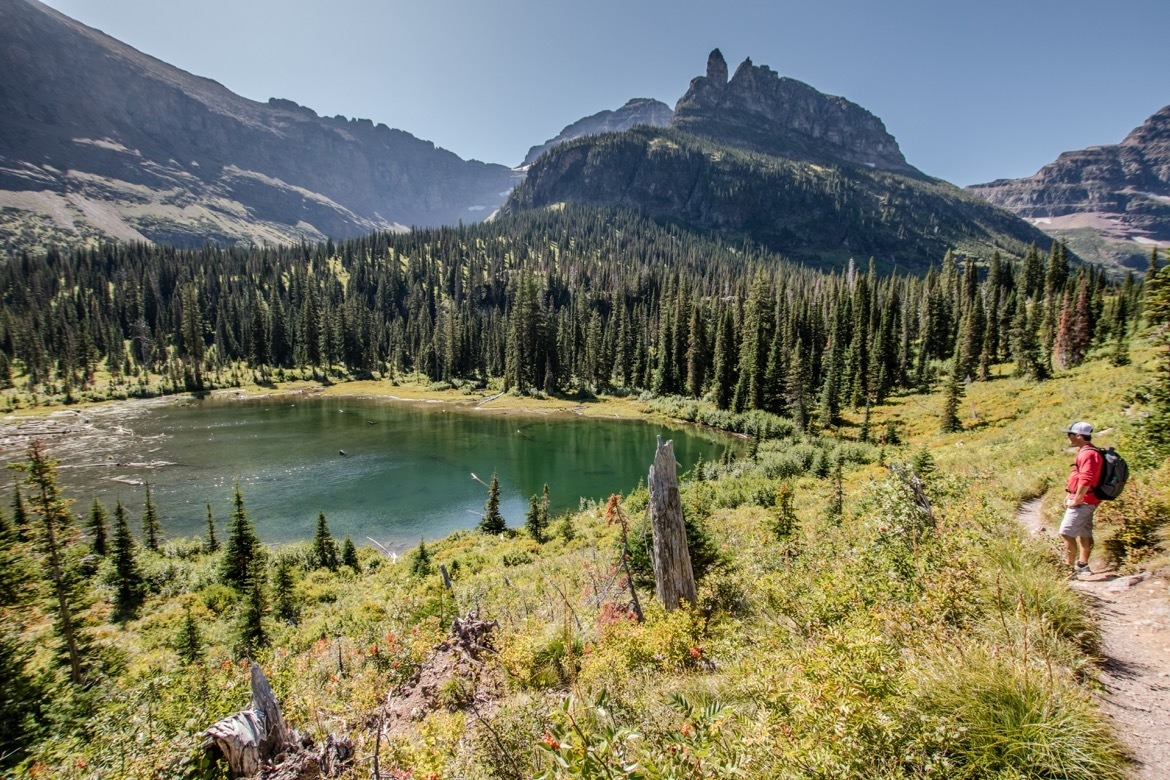 Just an hour later, we found ourselves pulling through the park entrance at St. Mary and couldn’t believe our luck. Going-to-the-Sun Road can be congested during summer months, even after Labour Day since the highway typically closes for the season within weeks depending on road maintenance schedules. 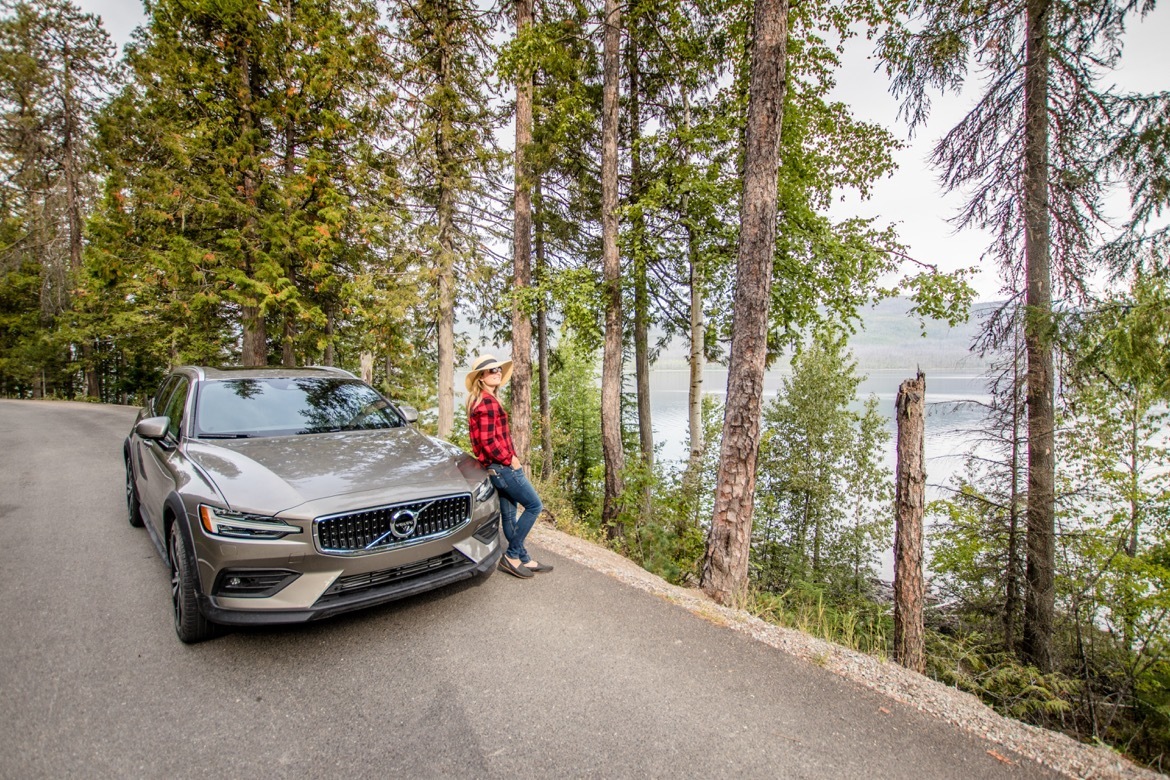 But on this particular late afternoon with the sun still high in the sky, we quickly realized we were among the few visitors still out exploring. Instead of arriving to packed pullouts, we were able to easily park at the deserted viewpoints as we pleased, making it a cinch to hop in and out to snap photos and admire the sweeping alpine views that changed with seemingly every single bend in the road. The jewel-toned rivers, softly-lit peaks, and valleys misted over by low-hanging, fluffy clouds were ours to discover. 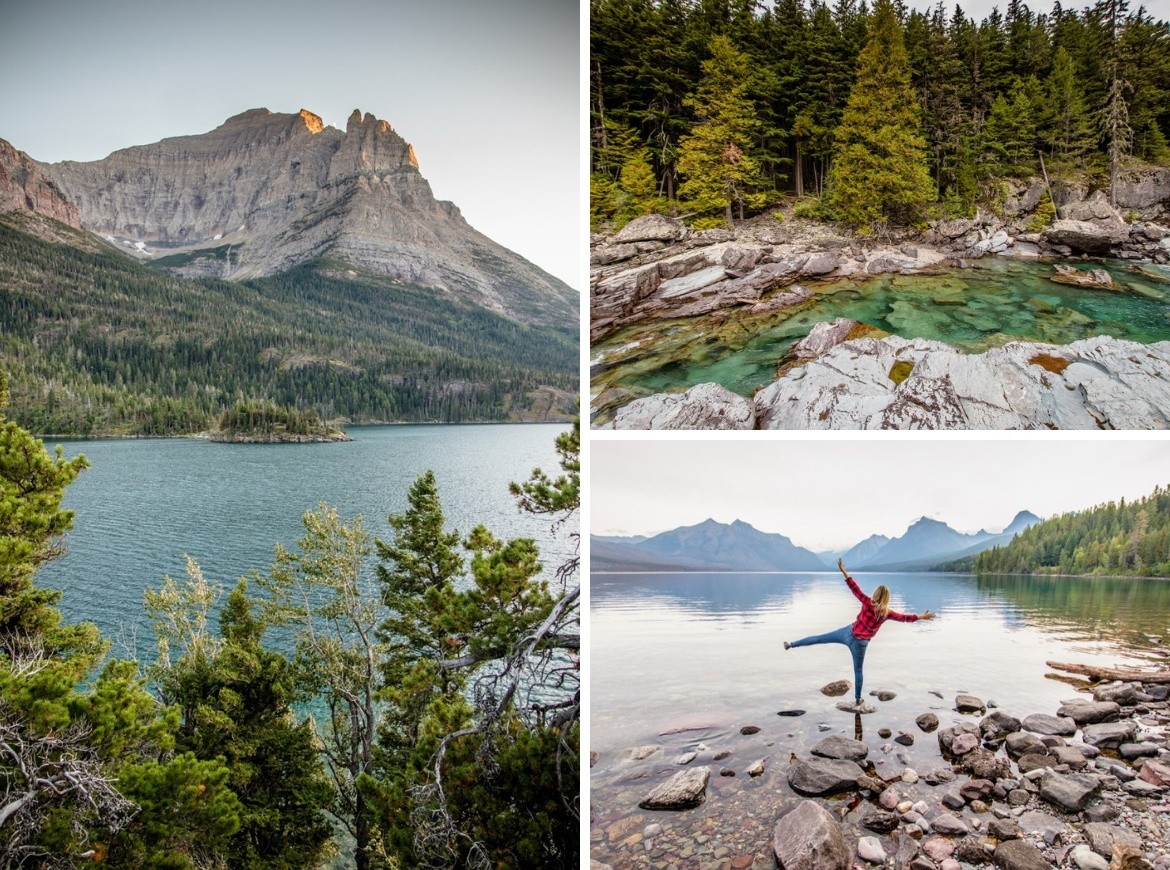 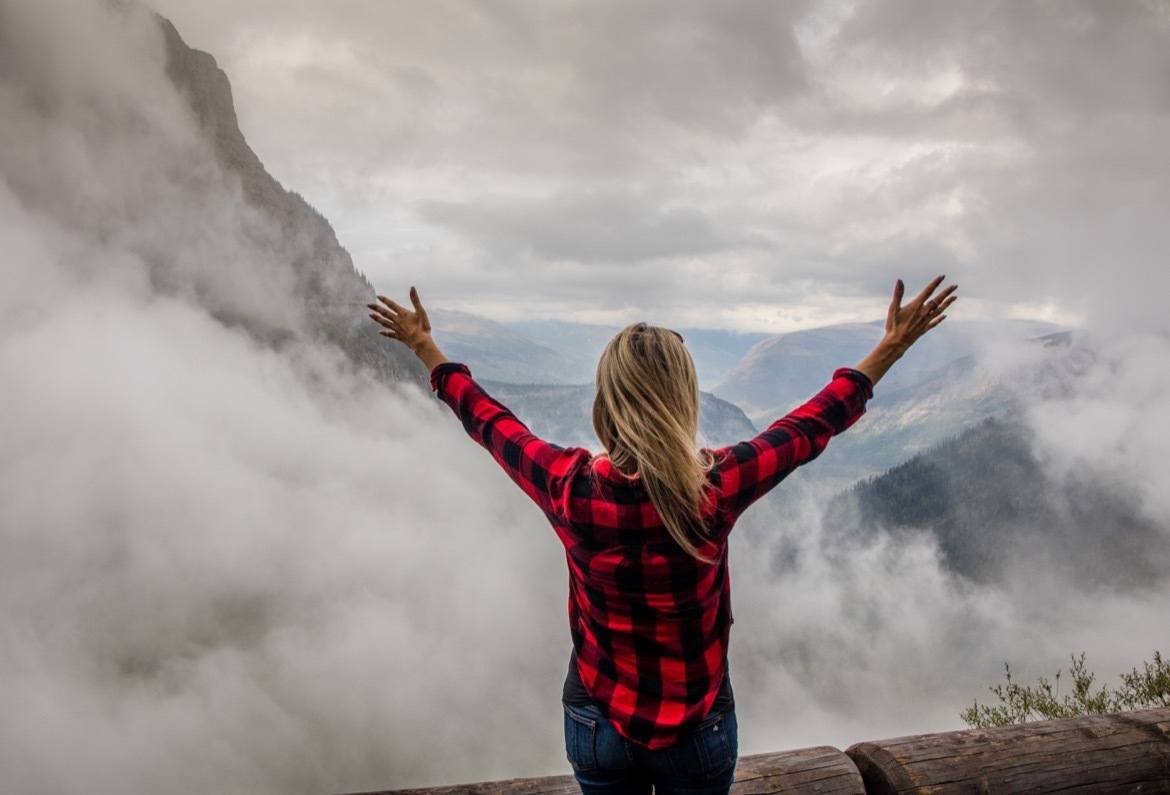 While it should technically only take two hours to drive the length of the Going-to-the-Sun highway, approximately that much time had already passed and we were only just arriving at the halfway mark, Logan Pass. With sunset approaching, we had a decision to make: tackle the three-mile round trip hike to Hidden Lake which is one of the park’s most loved lookouts, or head back east to capture the scene from an easier vantage point.

A quick conversation with an older gentleman who had just finished the walk made up our minds for us–turns out a grizzly had been spotted not too far down the trail from where we were standing, and we didn’t have any bear spray handy. Safety first, kids. 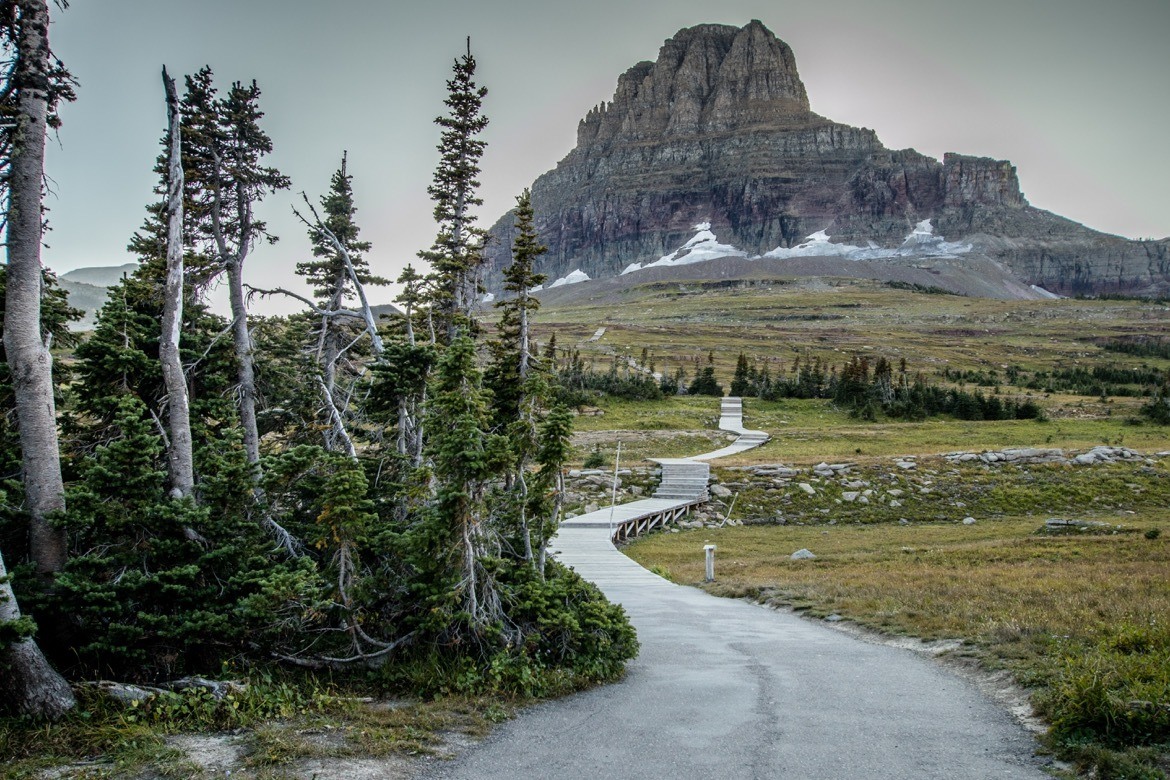 The trail to Hidden Lake

With that, we soon found ourselves back at our favourite spot in the east side of the park, called the Sun Point Nature Trail which leads to a series of waterfalls and backcountry lakes. The pathway serves up sweeping views of the surrounding glacial valley and tiny islands popping out of the water, which has a range of hues from emerald green to cobalt blue depending on how the light hits it. Making our way down the secluded trail, a fawn pranced ahead of us, effortlessly vanishing into the cover of some nearby shrubs as quickly as it had appeared. 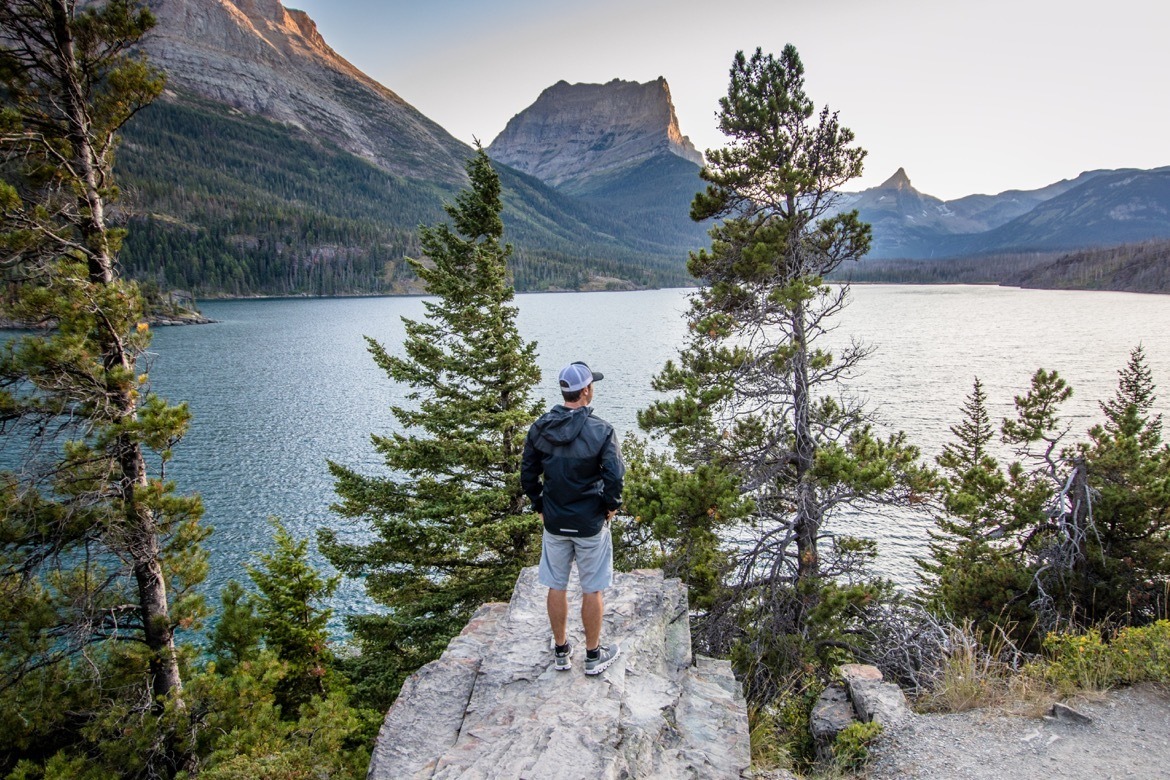 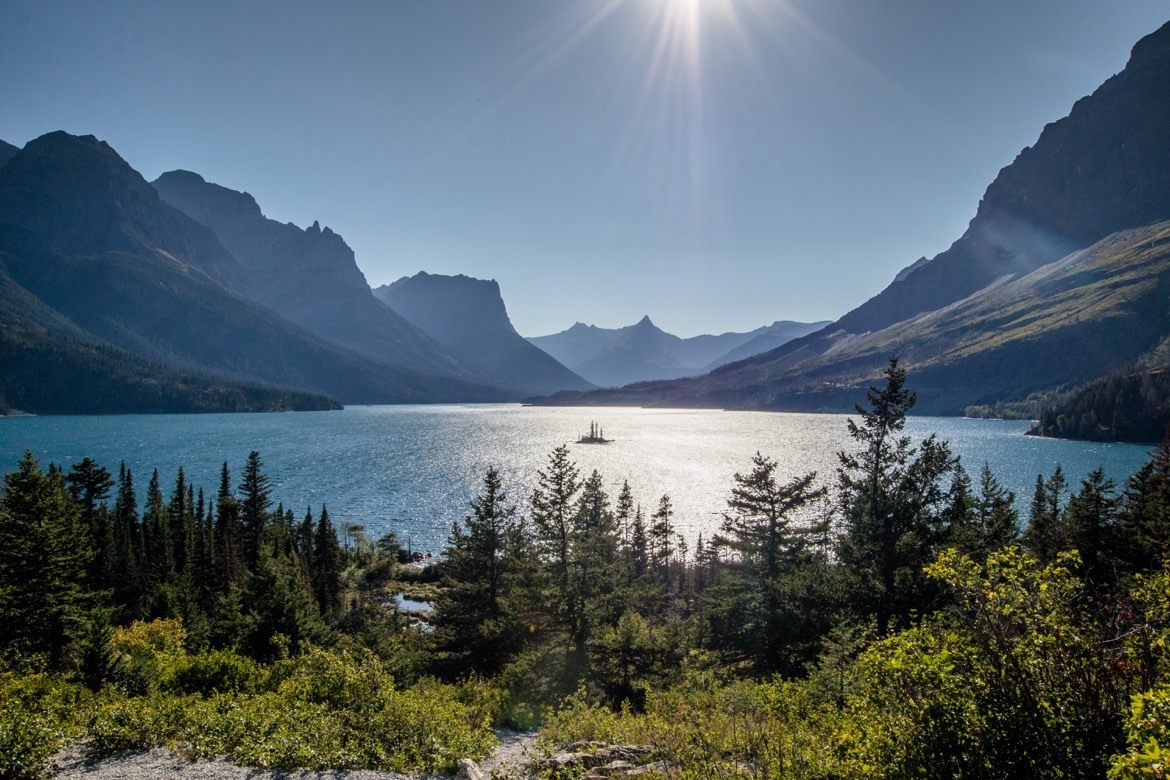 We scrambled up the blonde rocks, finding ourselves all alone at the top of a hill overlooking St. Mary Lake as sunset cast a rose-gold hue over the still water. A hush fell over the valley, and the only sound was the wind gently rustling the leaves in the nearby trees. We wordlessly soaked in the scene, finding it impossible to imagine a more perfect way to cap off an epic day of exploring Glacier National Park.

Little did we know our bear sighting would happen just a few minutes later, making for the ultimate Montana moment in East Glacier. 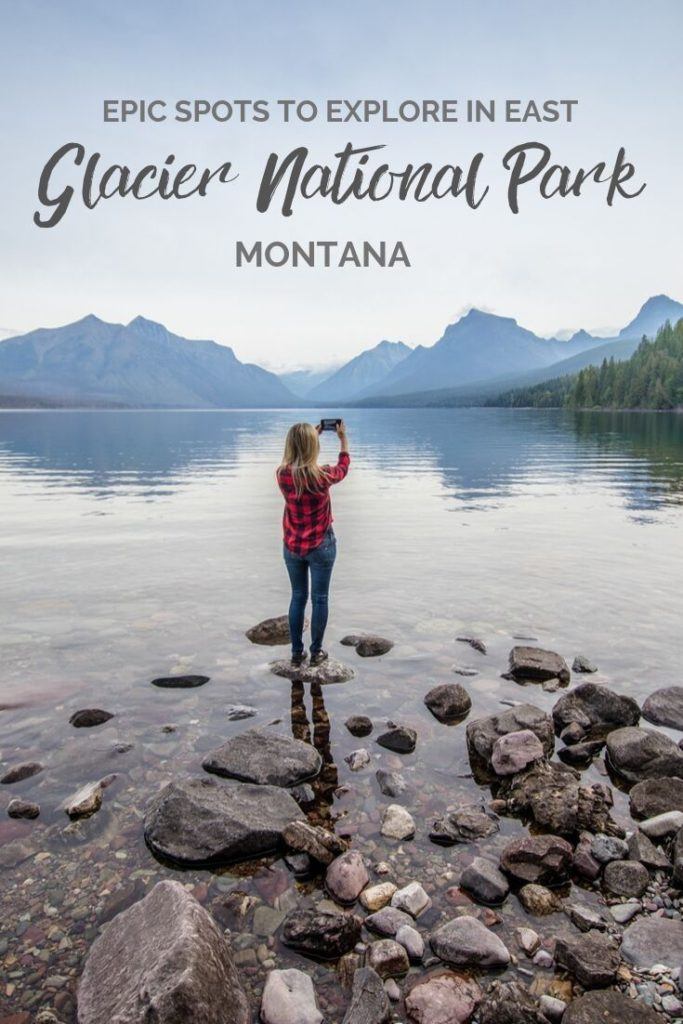 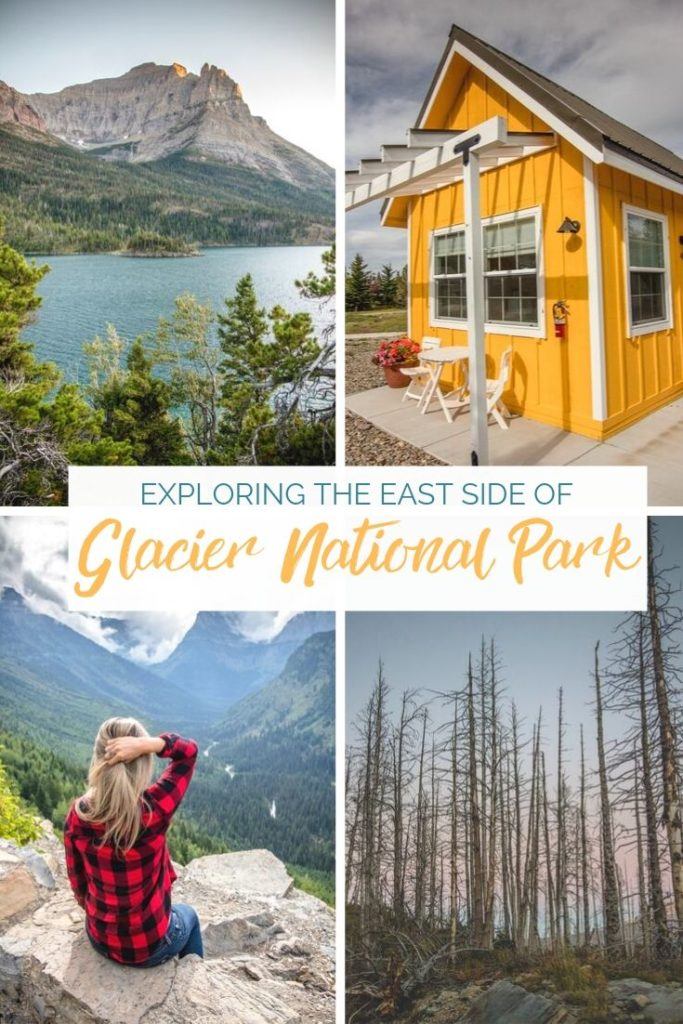 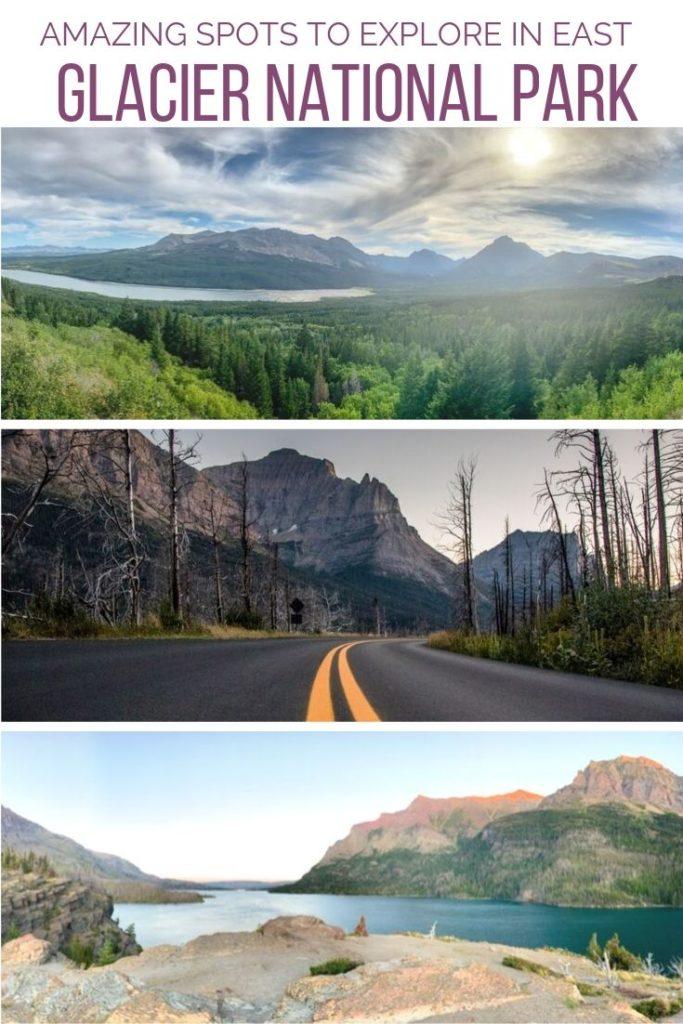