Monkeying around at the Embera Quera village in Panama 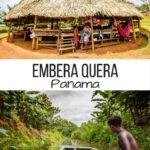 I ate lunch with a monkey sitting on my lap, in case you’re wondering what travelling in the Panama jungle is like. 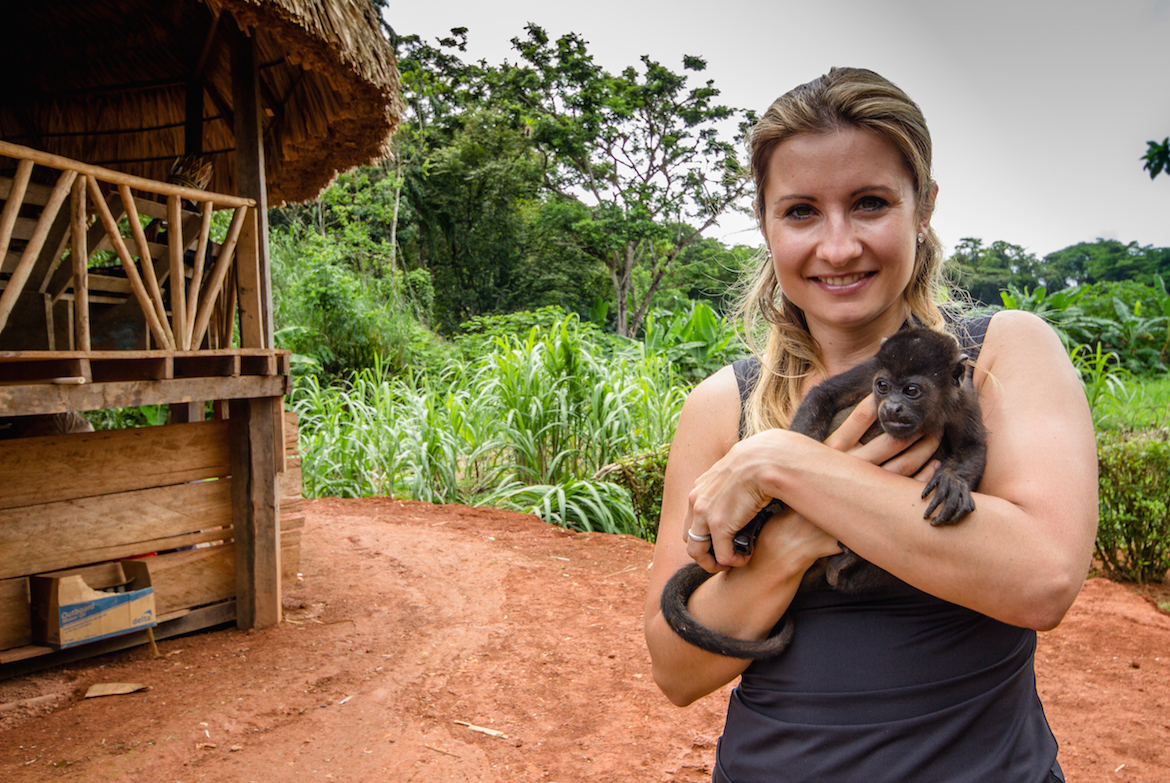 His name was Manolo—like the shoes—and he was a five-month-old howler monkey with wide, curious eyes and a long tail he wound around our necks and forearms like a snake. Our group had come to Panama’s Embera Quera community to learn more about the indigenous people who live completely off the grid, but as soon as we laid eyes on mischievous Manolo it became apparent he would be the star of the show that day.

Little Manolo was rescued by the tribe a few months earlier, and while there are plans to reintegrate him back into the wild jungle that surrounds the settlement it’s hard to say if they’ll be able to follow through. After all, it’s not often one can boast about having a pet monkey, much less one with such an endearing personality it instantly has adoring visitors figuratively wrapped around its lanky fingers.

We met Manolo shortly after arriving at Embera Quera, which is found near Colon and accessed only by boat or helicopter. We’d arrived by water, the boat captained by two teenage boys whose gleaming black hair caught the sun rays as they wordlessly navigated the boat along the winding Gatun river.

Their tan skin was covered only by loin cloth and jagua, a plant-based paint similar to henna used for both decoration and to protect themselves from the scorching sun that beat down overhead. 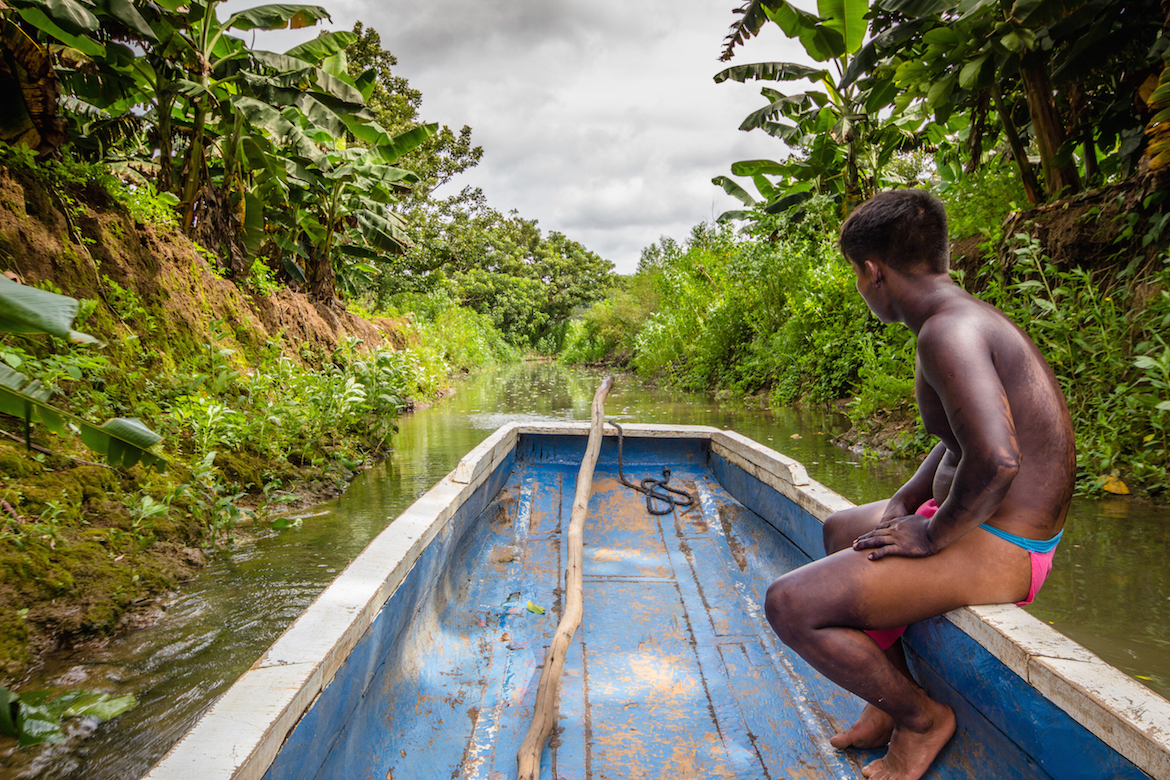 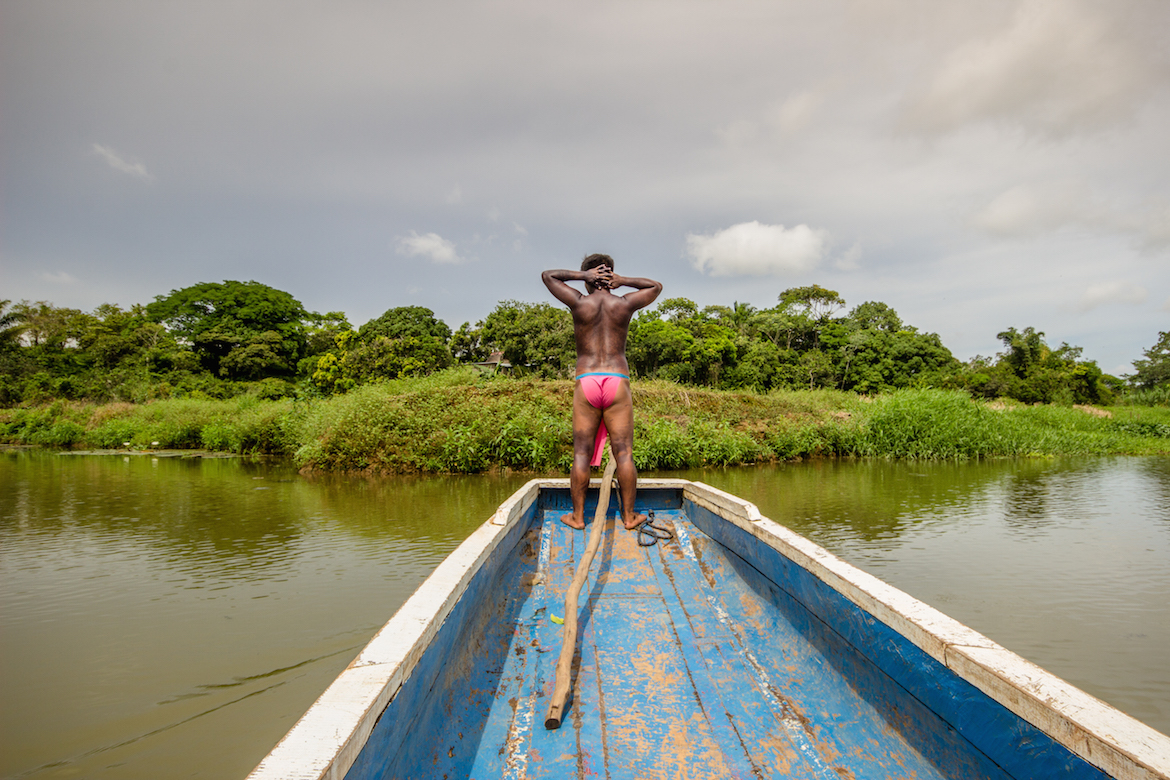 We learned to scan the shoreline and scraggly tree branches as we glided along, catching glimpses of red-billed birds, grazing cattle and families of turtles poking their long necks out of the cocoa-hued water. But none of those sightings prepared us for the excitement of what was to come. 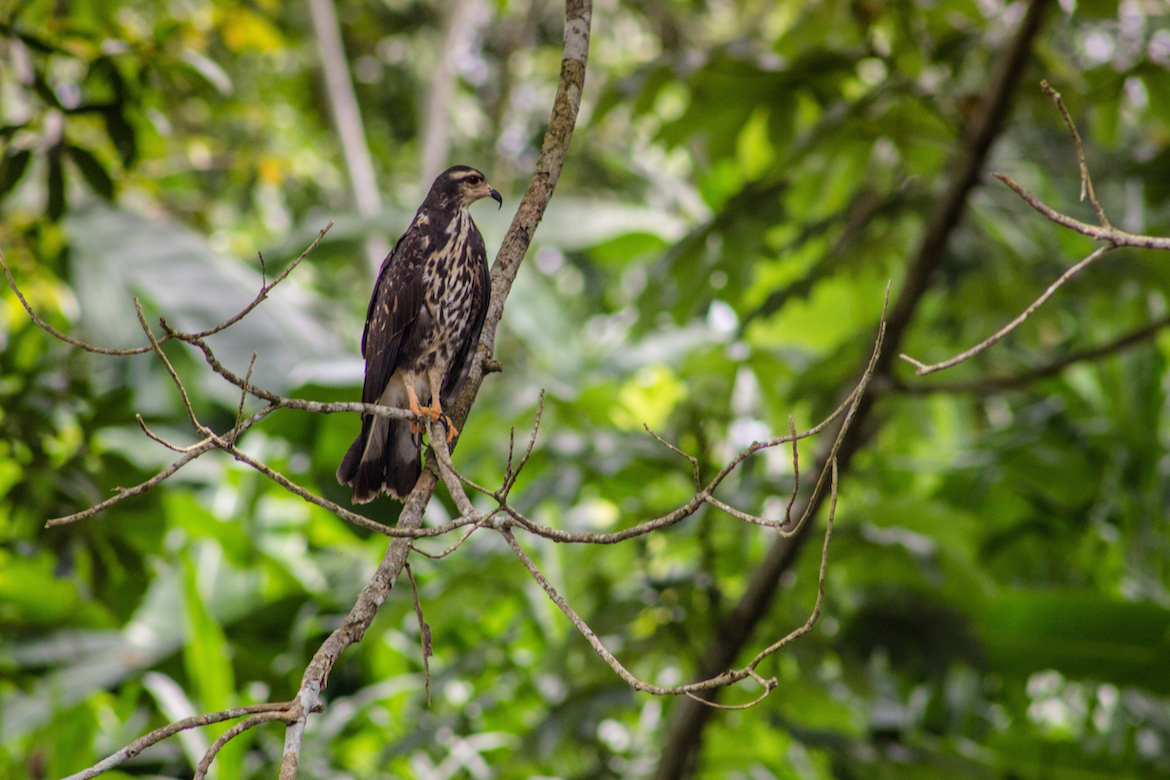 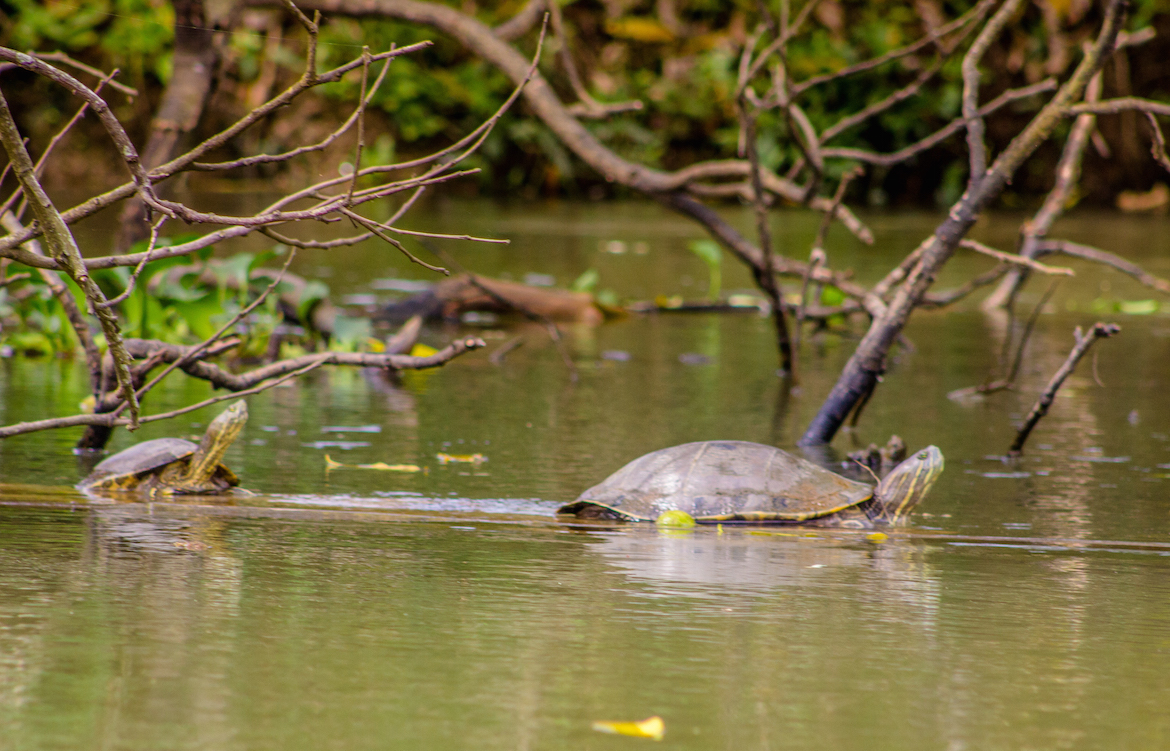 As we neared a thick set of brush, our young captain suddenly cut the motors and we silently bobbed toward the jungle. That’s when we heard it: the unmistakable sound of an excited monkey clamouring through the leafy trees, coming straight toward us in search of a snack.

Our guide was prepared, procuring a banana out of his bag and holding it out to our new friend who latched his long tail onto the branch like a fifth limb and eagerly reached down to grab it. It’s hard to say who was more excited by the encounter: the well-fed spider monkey, or our group of city slickers who marvelled at the sight, some even letting nervous shrieks slip out when the creature swung right above our heads, eventually settling in for a quick snuggle with captain Elvin in a scene straight out of The Jungle Book. 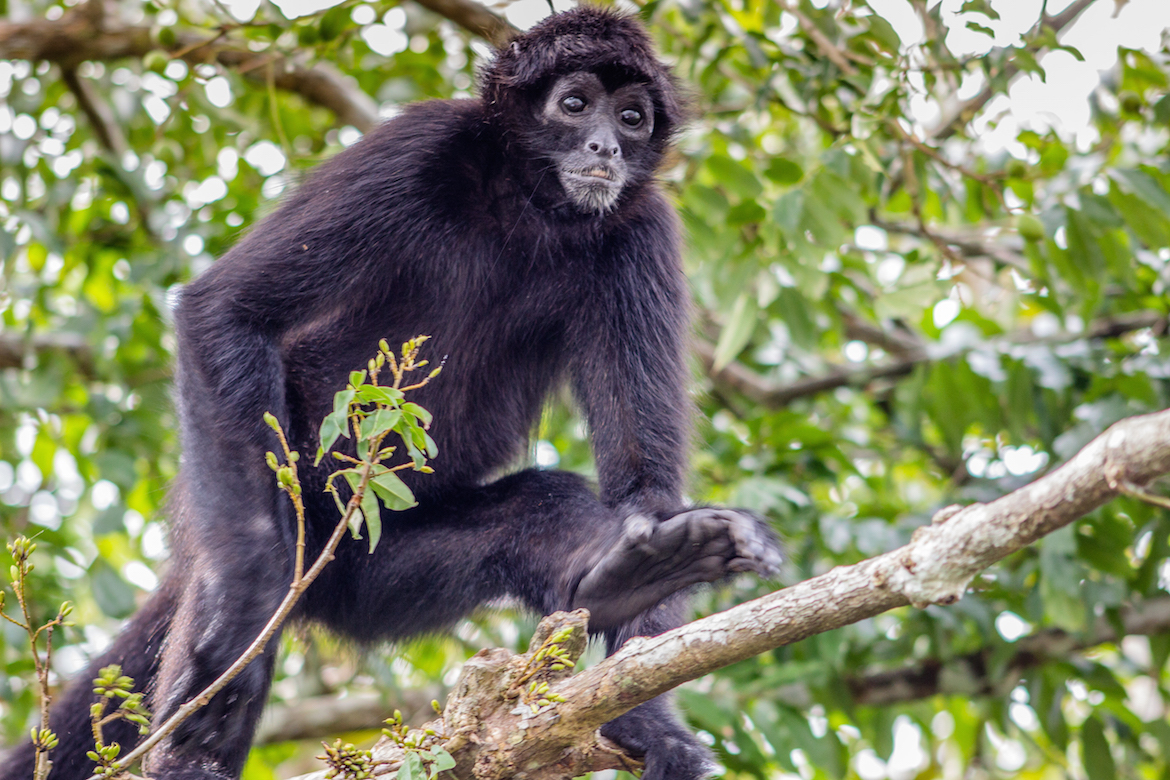 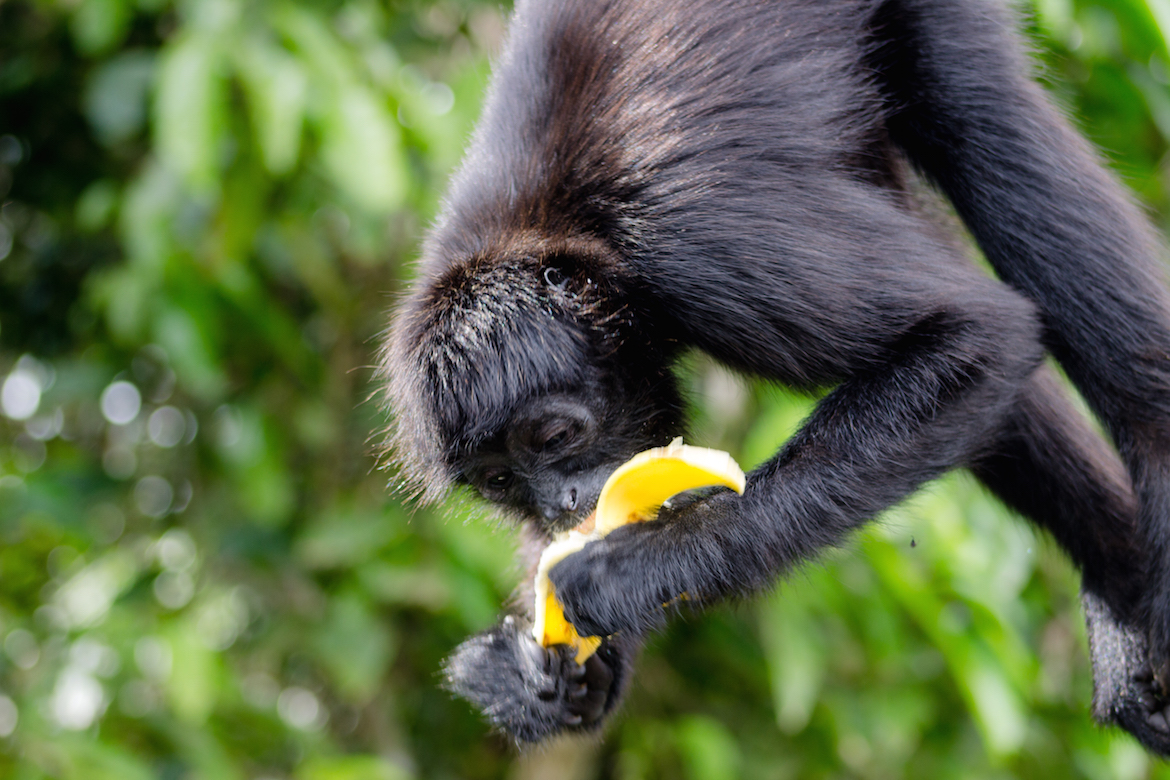 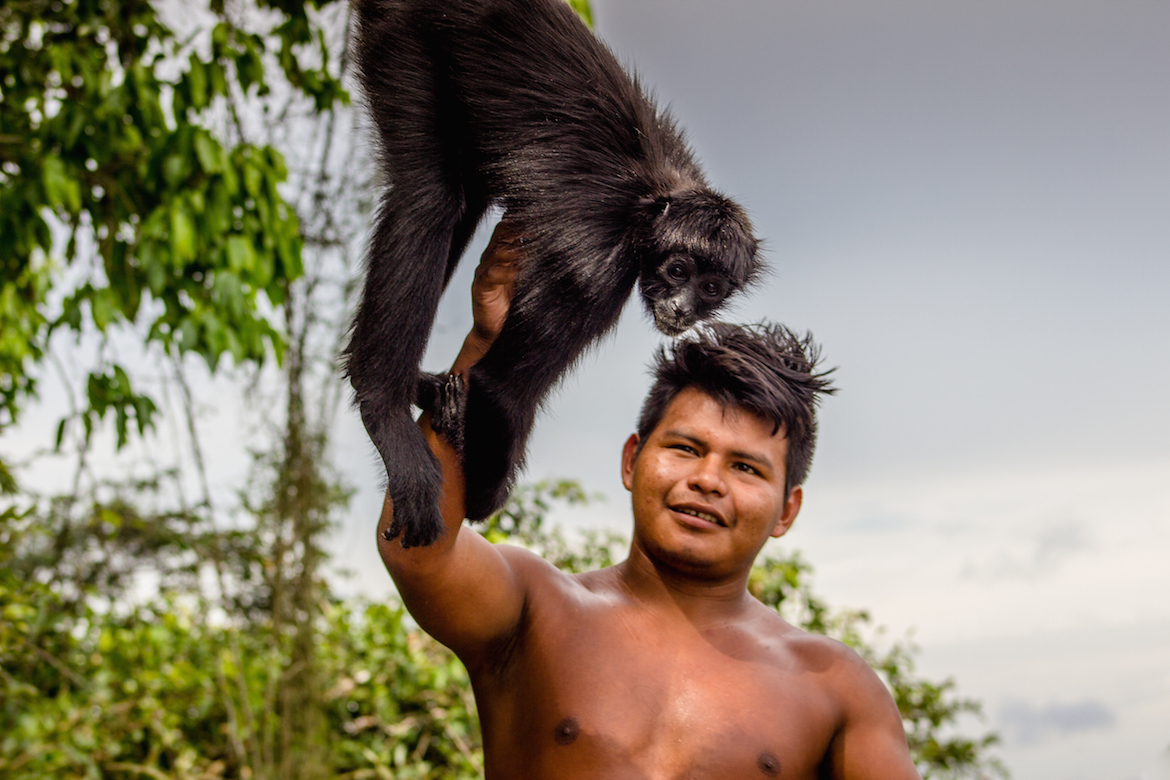 It turned out the wildlife encounters were far from over.

A short time later we arrived at the village, and the entire colourfully-clothed tribe welcomed us with a traditional song before shaking each of our hands, the result an endless chorus of “hola” and “bienvenidos!” I was dizzy trying to take it all in, my eyes darting from the thatched huts nestled into the vibrant, palm-covered hillside to the dazzling silver coins covering the women’s bosoms, then finally to a group of bashful tots hiding behind their young mothers’ legs.

The smell of a campfire floated around us, and as I moved toward it that’s when I saw Manolo, his limbs clinging to a wooden railing with his bright white teeth on full display. 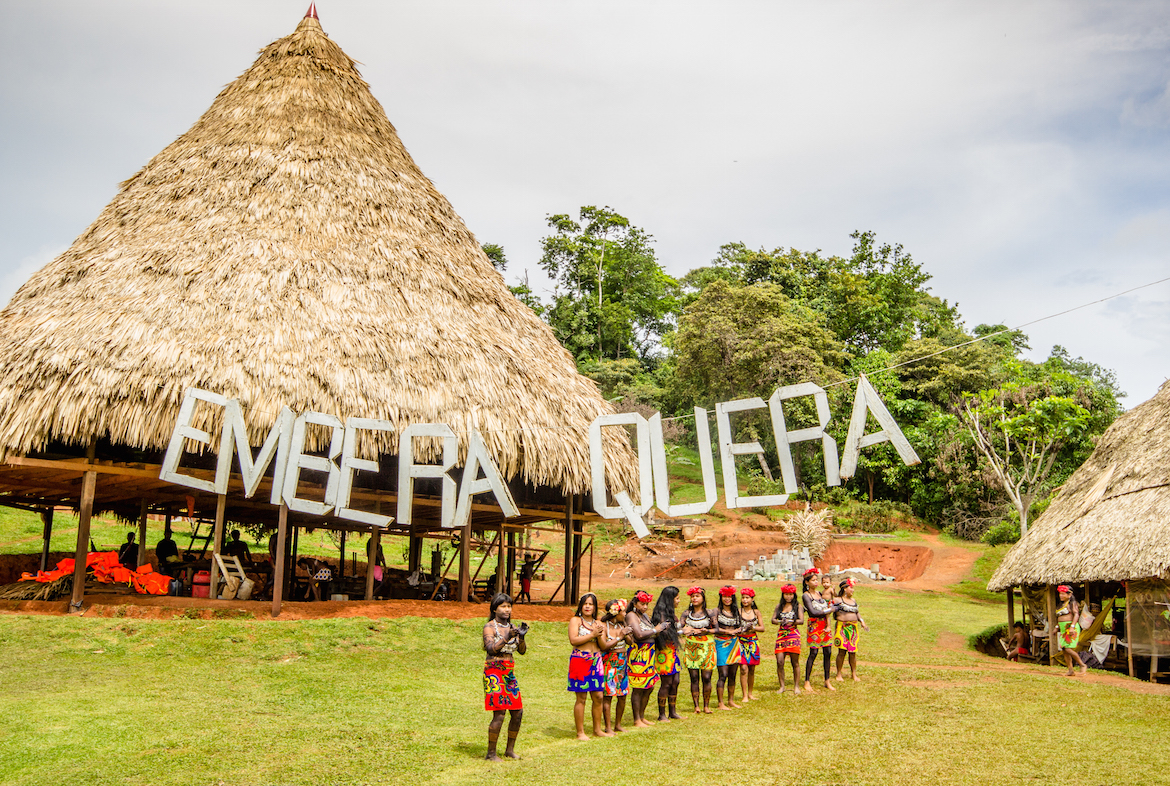 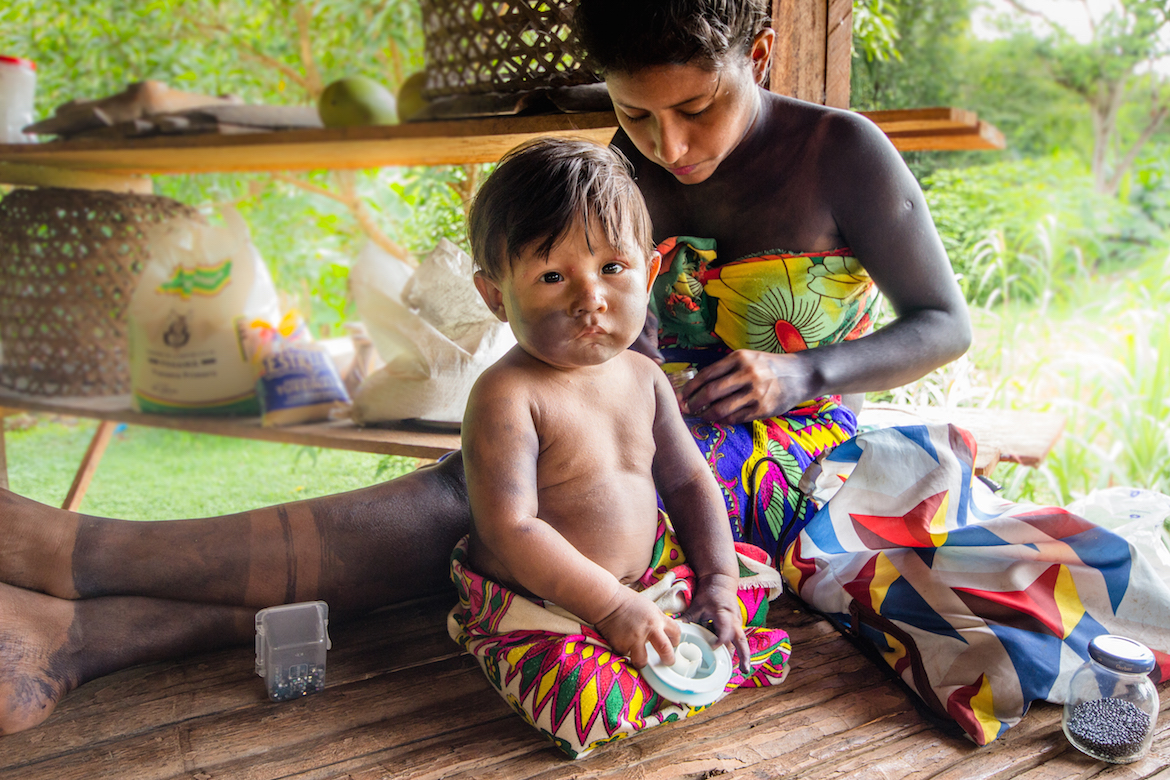 He wasn’t alone either: it turns out Manolo has a friend named Tony, a proud and somewhat aggressive toucan who earned his moniker after going after a tourist named Tony who got too close to the ol’ bird.

While we were savvy enough not to get near him, we couldn’t help but crack up as he awkwardly hopped along the floor with his rainbow bill tapping the ground in search of food scraps. 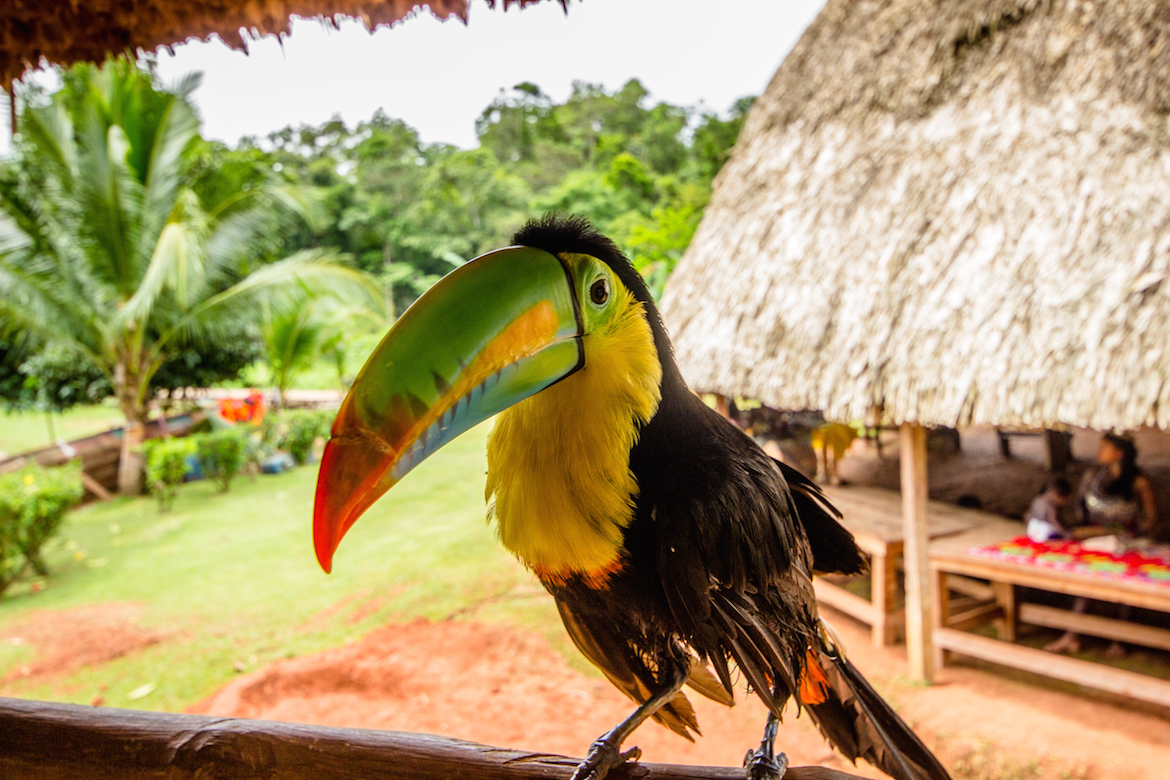 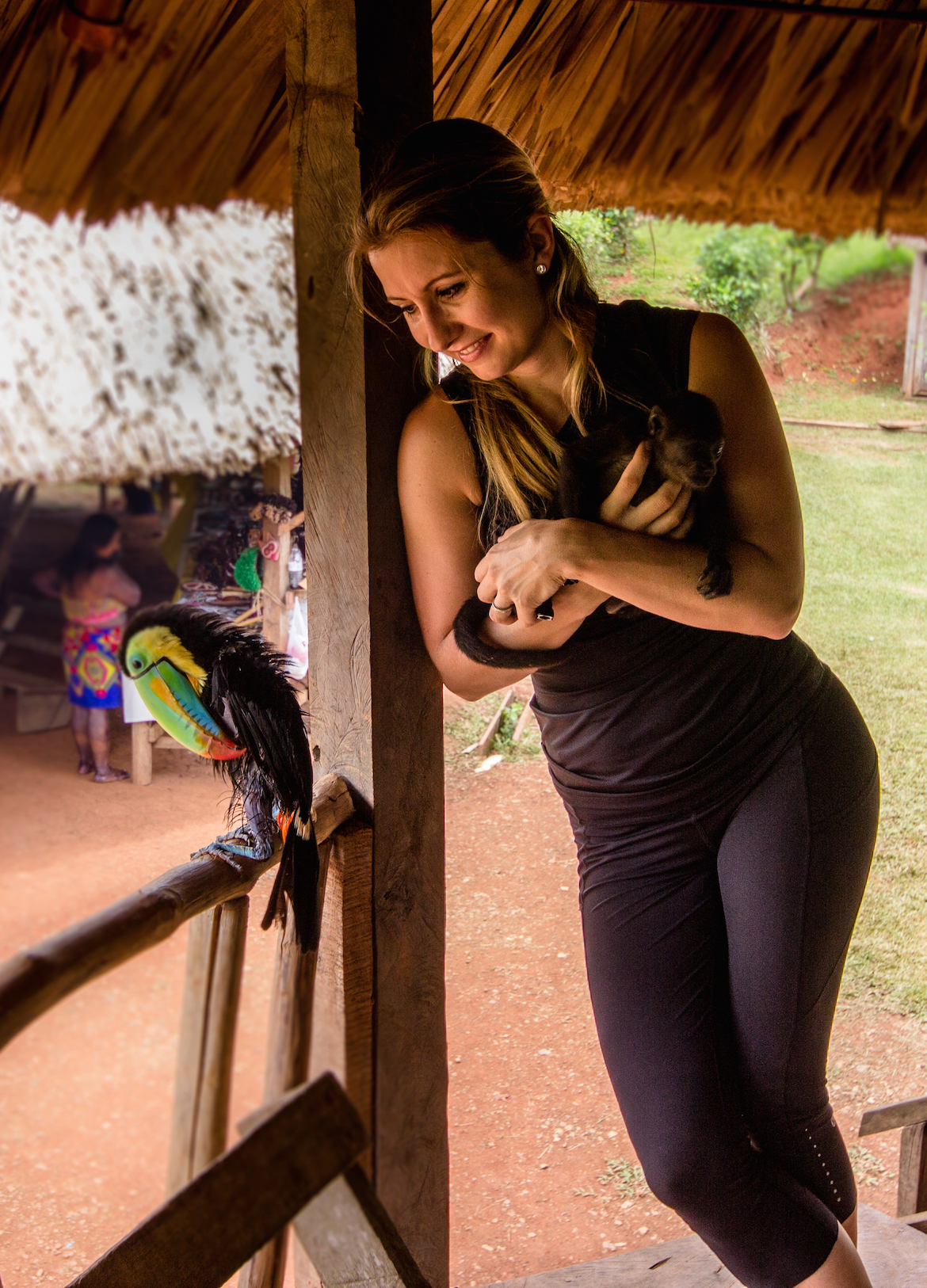 Our group sought respite from the blistering heat by moving into the shade, gathering in a half-circle in the same hut our lunch was being prepared in. While we were there to listen to a young village woman named Lisbet talk about her tribe’s unique way of life, we couldn’t help but be distracted by the dog and pony—err, monkey and toucan—show.

Perhaps not the first visitors to succumb to their charms, Lisbet patiently waited until we had all gotten our fill of Manolo snuggles and selfies before opening the floor to questions. 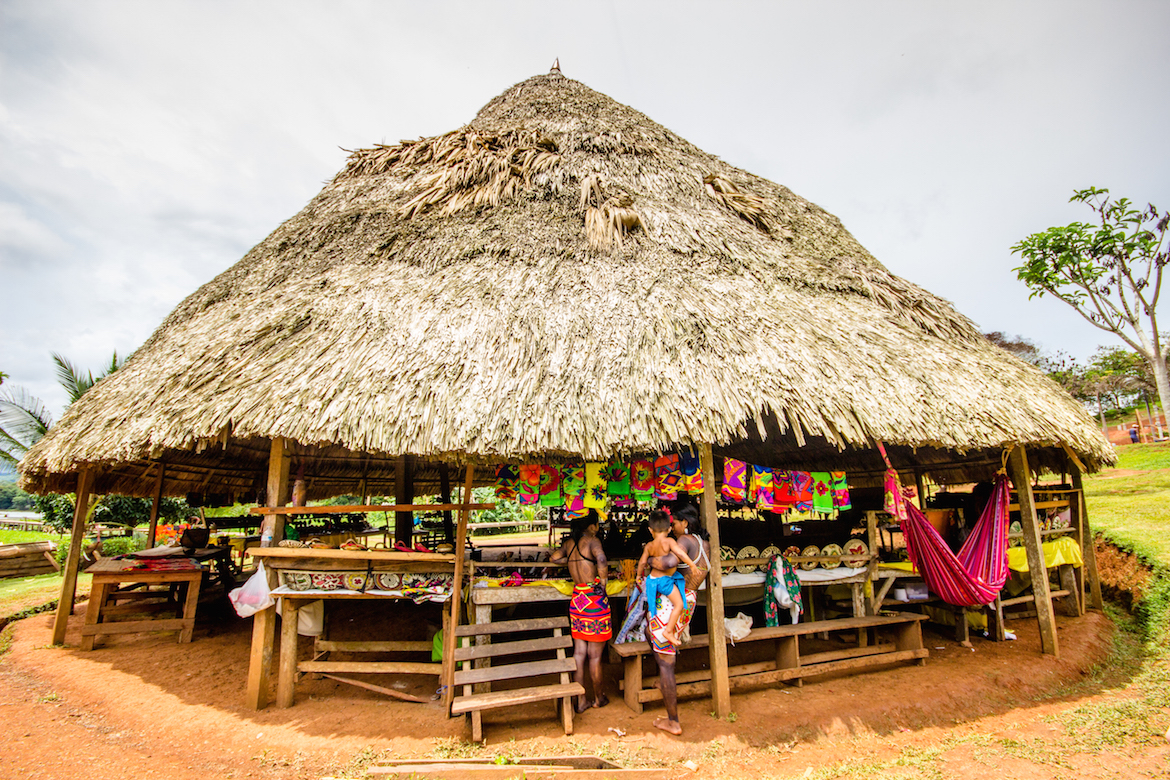 The Embera Quera were originally part of an indigenous group from the area between Panama and Colombia, who resettled closer to Panama City more than two decades ago due to issues with the economy and education. Ten years later they moved again, this time to their current settlement where they could purchase the land outright and be completely independent from the government.

The result is an 11-hectare spread, nine of which is used solely for conservation, and the tribe earns their income by hosting tour groups and selling handicrafts. 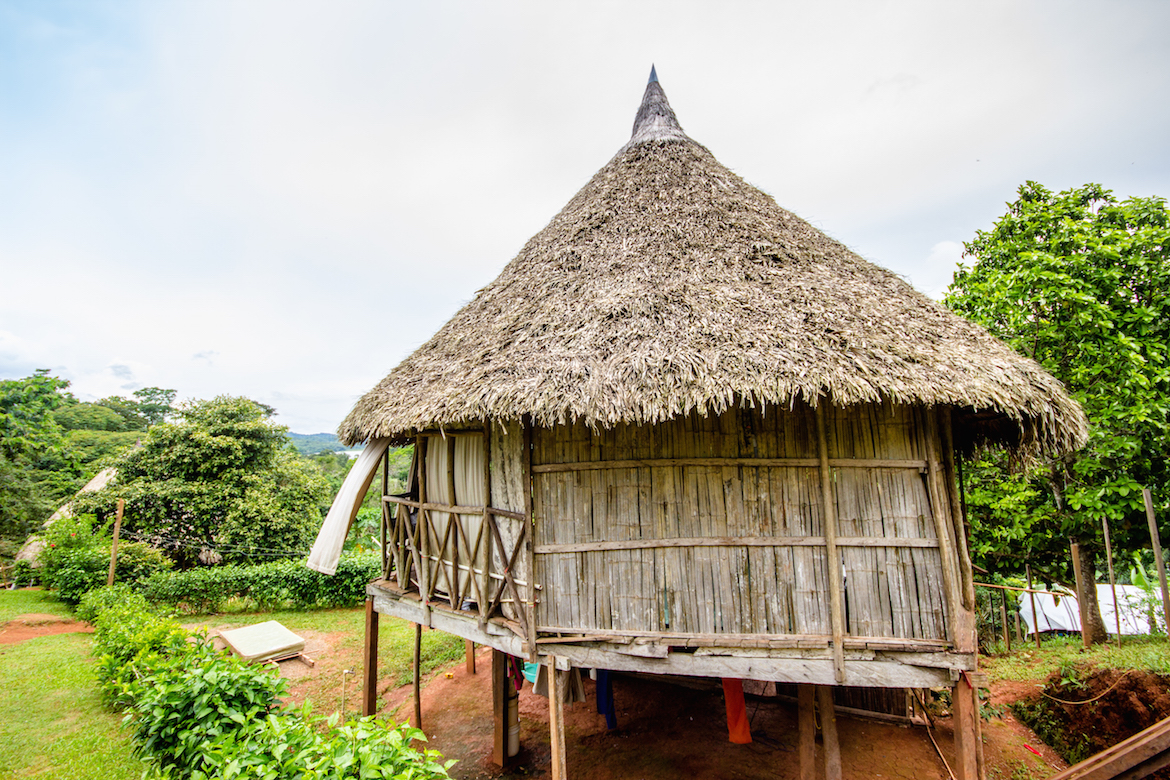 A house at Embera Quera

Unlike some similar set-ups elsewhere in the world, what visitors on a Panama day tour can expect to see when visiting the community is completely authentic—the loin cloths and brightly-patterned skirts are what community members wear every day, the jagua body paint isn’t just for show, and the 23 families really do live in thatched huts that don’t even have walls.

In fact, they’re almost completely off the grid, save for one generator that’s turned on for a couple of hours each night so tribe leaders can charge their cell phones (which are only used to coordinate logistics such as when to send the boat for a member who might be returning from college in Panama City, or to arrange a tour group visit.) 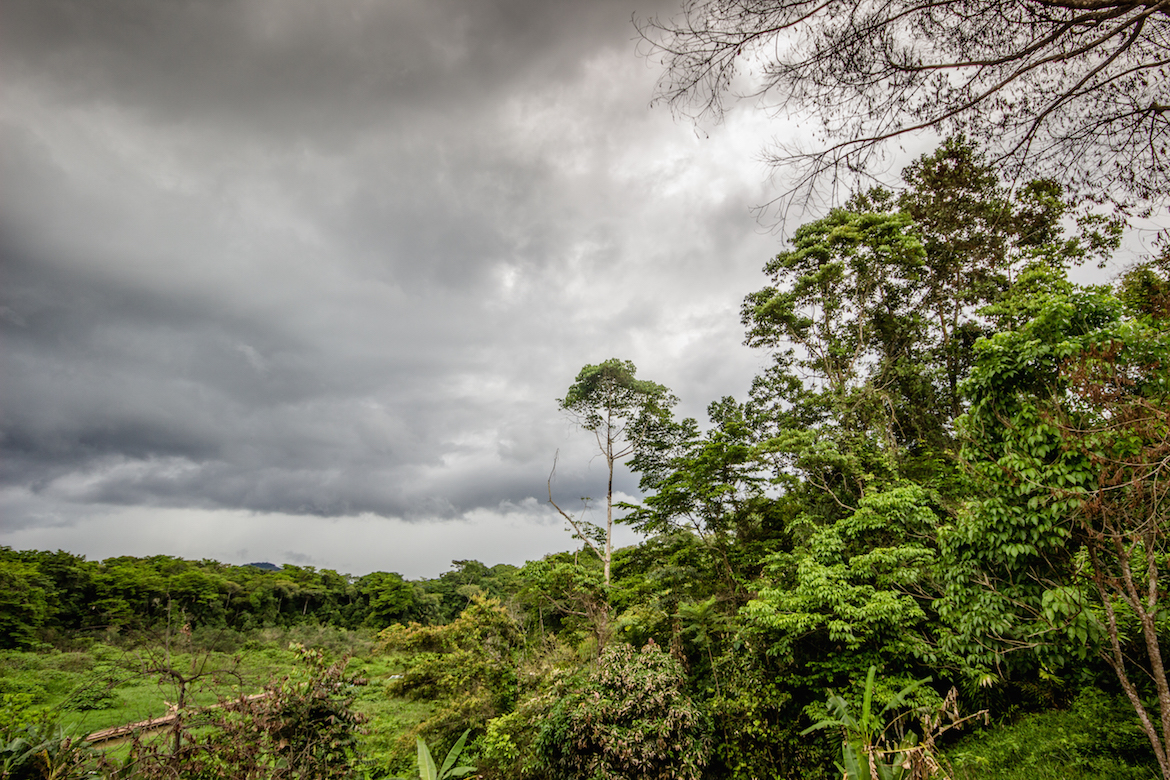 Our group spent the good part of an hour peppering Lisbet with questions like “when do women start having kids?” (some as young as 15), “how are tribe leaders decided?” (everyone over age 12 gets to vote) before we were greeted by the resident botanist, Miguel. A man in his sixties whose body seemed more like that of a 40-year-old, he appeared with quite the entourage in tow: his adorable toddler son, and a bright green iguana squeezed between his fingers.

Miguel guided us through the thick foliage surrounding the community, pointing out the plants used to remedy ailments such as snake bites and the side-effects of cancer along with spots like the football field and gym, which were so prehistoric it was like The Flinstones come to life. 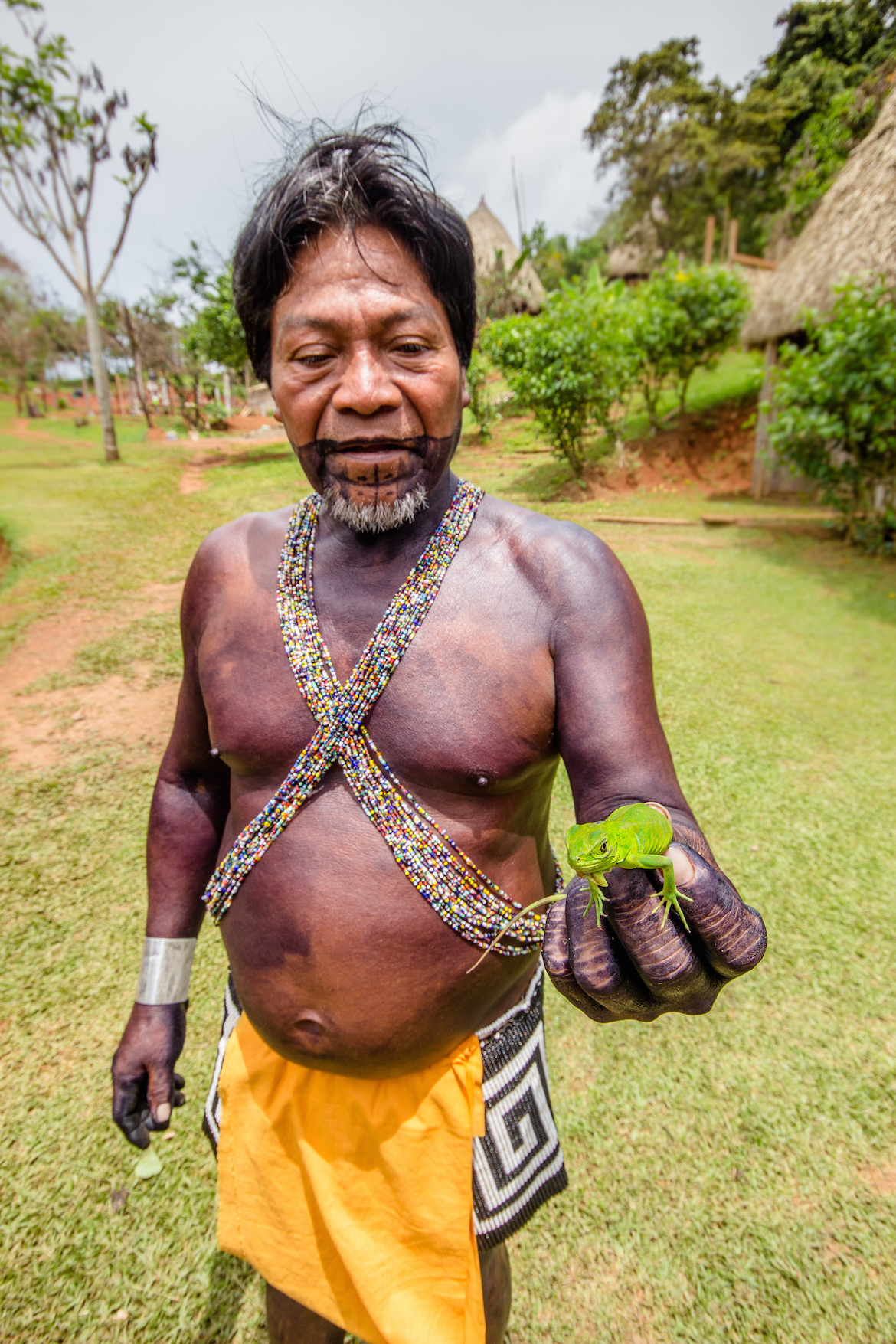 Miguel shows off an iguana 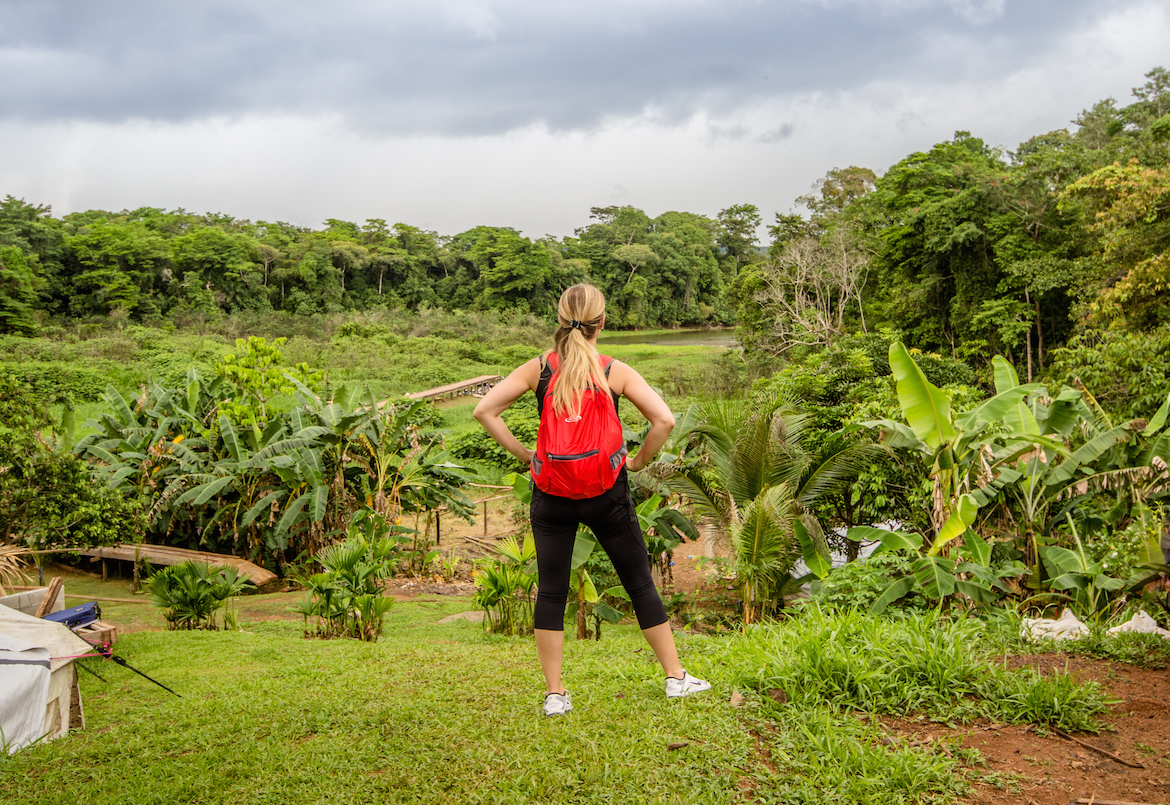 We’d worked up quite an appetite by then, so were pleased to return to the main hut to find our lunch artfully displayed. On the boat ride up we’d made a split-second stop to grab a bag of fresh tilapia from a fisherman perched on the riverbank, and it had been cooked to perfection, paired with patacones and limes and wrapped in a plantain leaf.

It turns out Manolo is a seafood fan, and he hopped straight into my lap, his little arms reaching towards my lunch in hopes of nabbing a few bites for himself. Think it’s hard to eat with a toddler around? Just wait until you’ve got a needy, adorable monkey commanding your attention. 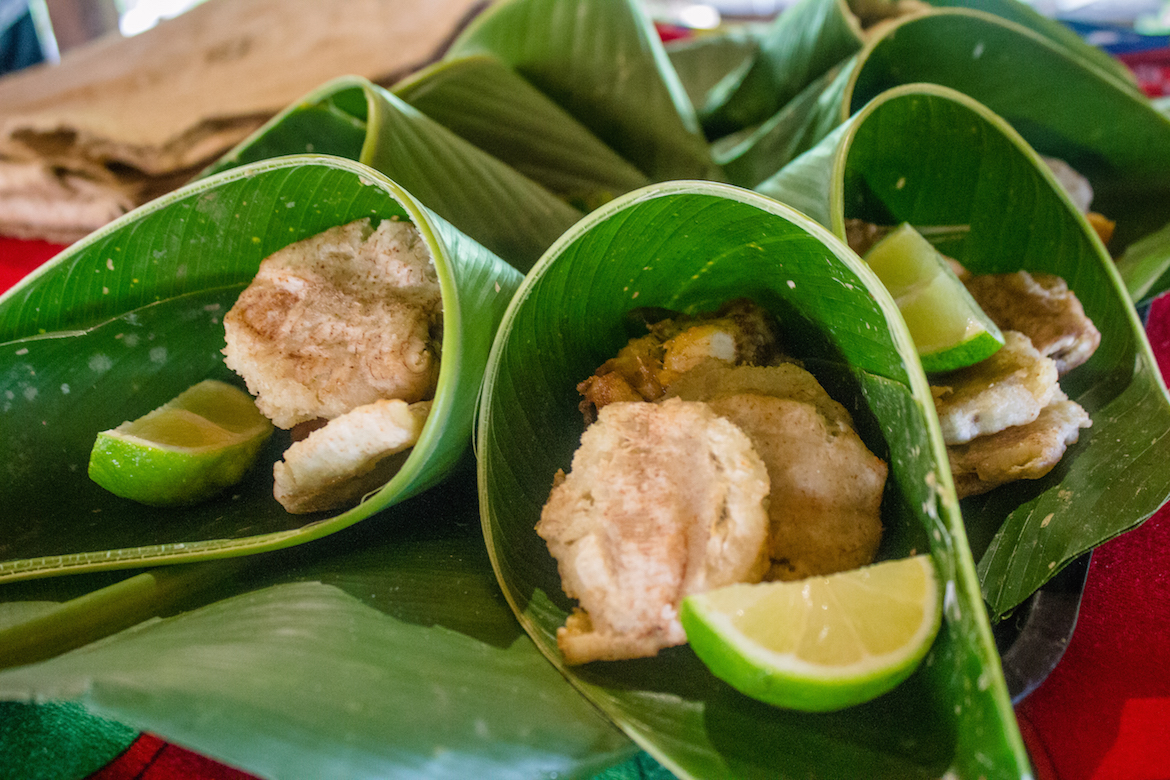 Our visit ended with a performance from the entire tribe, where the men played recorders and banged on drums as the women and children danced in a circle in front of them, their arms flailing out like birds and the young girls giggling as they tried to keep up with the quick pace. 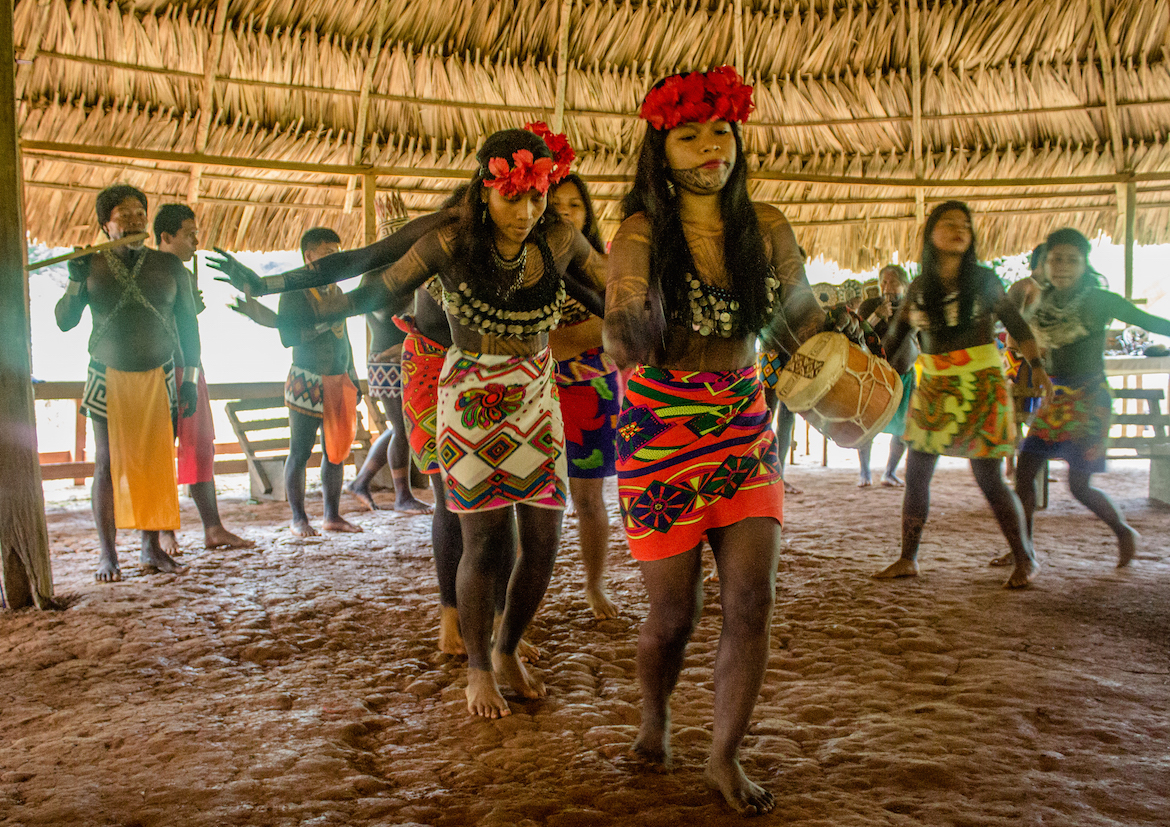 A traditional dance at Embera Quera

Eventually it was time for us to hop in the boat back to the big city, and wouldn’t you know it: Manolo wanted to hitch a ride, wrapping himself around my friend Karla’s leg like a child who doesn’t want their parents to head out for the evening. She reluctantly pried him off and we bid a fond farewell to the Embera Quera tribe, offering thanks to the kind villagers and sneaking in one last second of monkey tummy rubs. I’ll never look at a pair of Manolo Blahnik shoes the same way again. 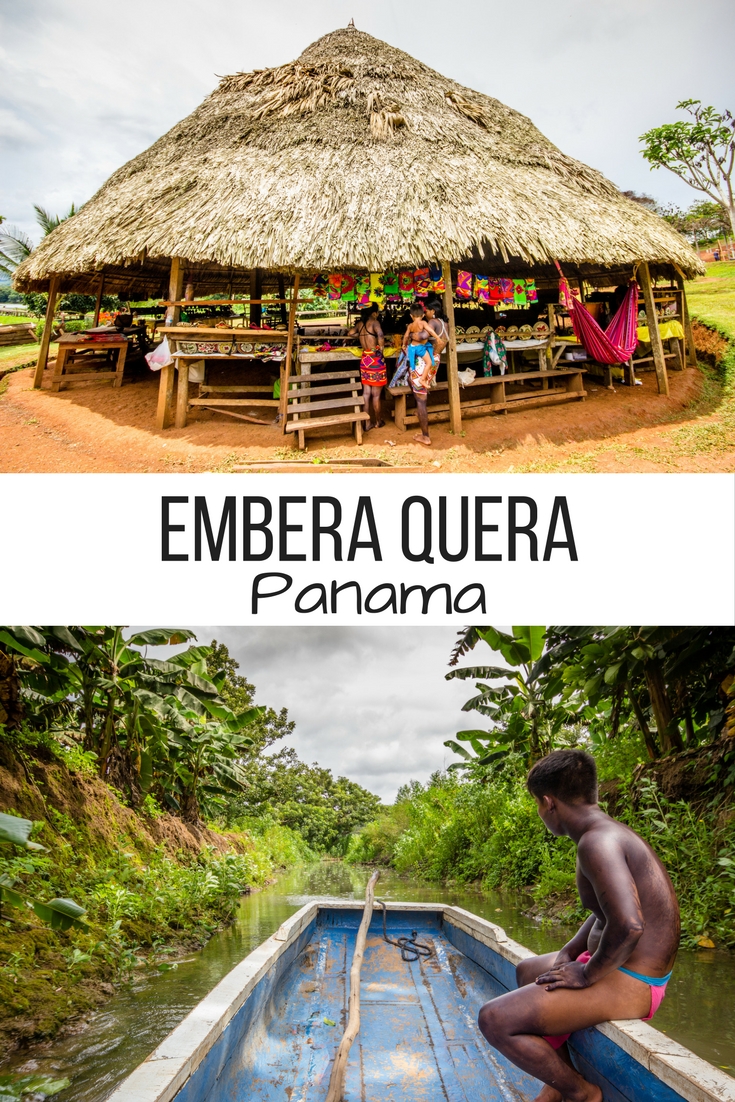