Our first mistake was showing up during rush hour.

In photos, Lucerne, Switzerland looks like a tiny, serene town overlooking a shimmering lake, with a flower-lined bridge being it’s only claim to fame. In reality it’s a beautiful, bustling city with perfectly-preserved historical buildings, a maze of one-way cobblestone streets, throngs of tourists jostling positions to get the best camera angle and important landmarks dotting nearly every corner. To say we weren’t expecting that there was so much to see would be an understatement, which made our arrival during the height of daily chaos slightly unfortunate. 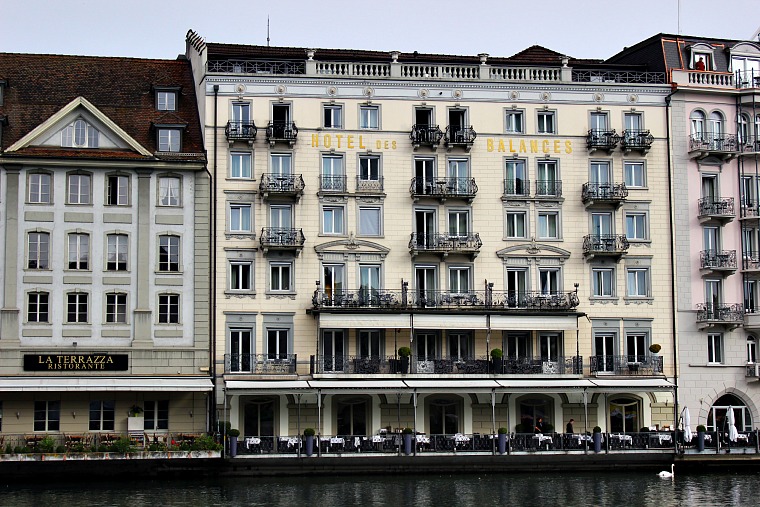 My husband and I were staying at the luxurious Hotel Des Balances right in the heart of the action. Decades ago, the site overlooking the famous Chapel Bridge and Water Tower served as the city hall, but has since been converted into a five-star hotel boasting some of the best views in Lucerne. The only downside to its waterfront location is that it can be tough to access by car—especially for people like us who don’t realize that the narrow ‘pedestrian only’ roads can actually be driven on by those needing to access the hotel. Lesson learned.

After 45 minutes of literally going in circles, navigating traffic jams and being thwarted by construction detours, the irony was not lost on us when the GPS recommended that we simply drive into the lake (true story). Finally, a kind young man took pity on us bewildered Canadians and hopped into his Range Rover to lead us all the way there. I’m pretty sure that if he hadn’t, we would still be parked in the middle of an intersection crying.

After that unexpected game of ‘meet the locals’, we finally pulled up to the hotel and gratefully ditched our car with the valet. That’s when we finally got to experience what draws people to Lucerne: its grand, sweeping vistas. After generously filling our glasses with some much-needed Chianti, we headed out onto our sun-soaked balcony and literally gasped at the sight stretched out before us. It really doesn’t get much better than this. 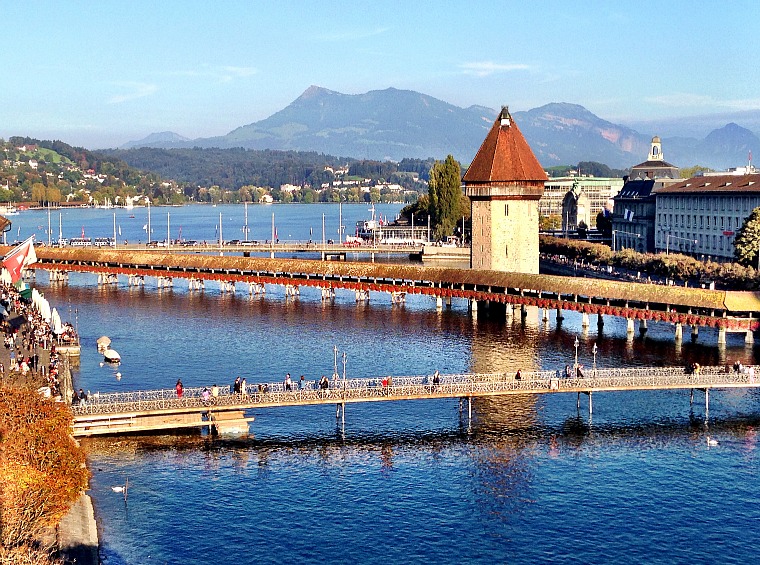 Due to our late arrival, only an hour passed before the sun began to go down, casting an enchanting pink haze across the sky which made the white-capped Alps pop in the distance. It’s funny how such simple, peaceful moments can sometimes be the one thing that stands out during travels, and this was no different. 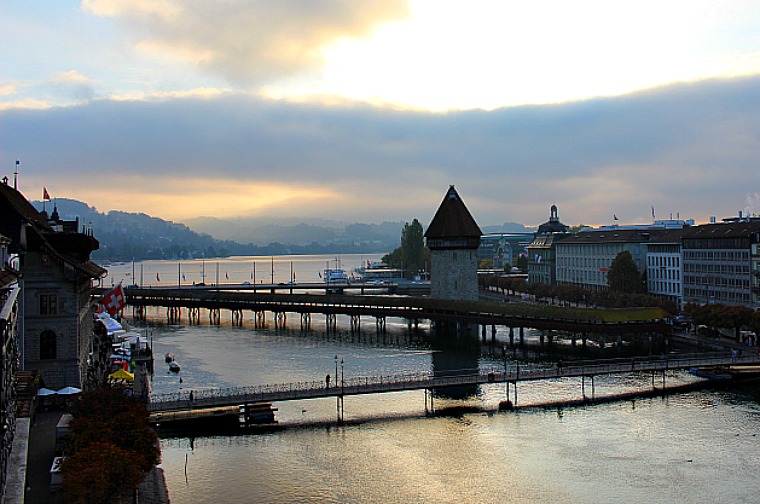 Later that evening, we ventured down to the boardwalk, taking in the crisp night air, the dimming lights and the sounds of a string trio whose classical music floated through the streets. Many of the shops were still open, touting luxury goods, and our window shopping led us towards dinner at Restaurant Burgerstube. The plush seating and dark, wooden walls reminded me of an English pub, but the mouth-watering meal we were served was more like something you’d find at a Michelin-star restaurant—highly recommended! 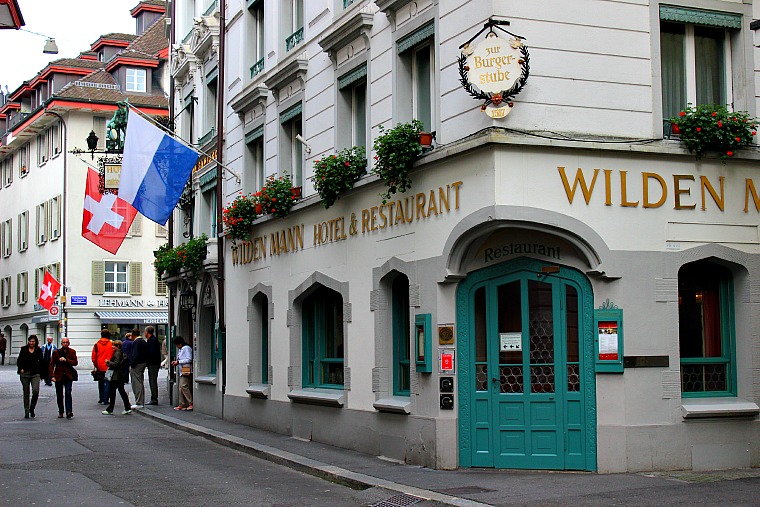 The next morning brought a wonderful surprise: what just might be one of the most spectacular breakfast spreads I’ve ever seen. Hotel Des Balances doesn’t mess around when it comes to starting the day off right, and the breakfast buffet was overflowing with fresh bread, cheese and pastries, ripe berries painstakingly arranged on tiny plates and made-to-order eggs, just to name a few. Oh, and did I mention the mimosas with fresh-squeezed orange juice? I feel like that should be mandatory everywhere!

The gourmet breakfast helped me fuel up the city tour I had planned for that day, and I was met in the hotel lobby by the lovely and knowledgable Gaby from Lucerne Tourism, who knows a ridiculous amount of trivia about the city. Though the day was grey, it couldn’t dampen my spirits as we weaved through the streets of the Old Town, pausing to look at the intrically painted facades that date back hundreds of years, and the fountains that are fed by glacier water so pure that people fill their water bottles up in them. 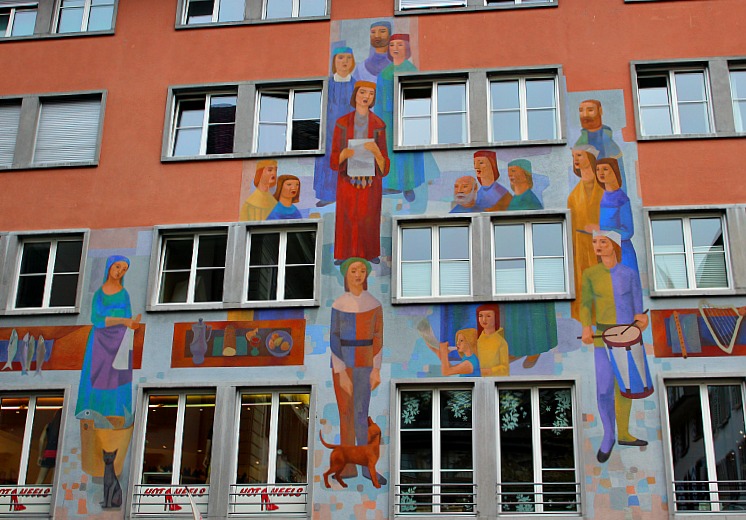 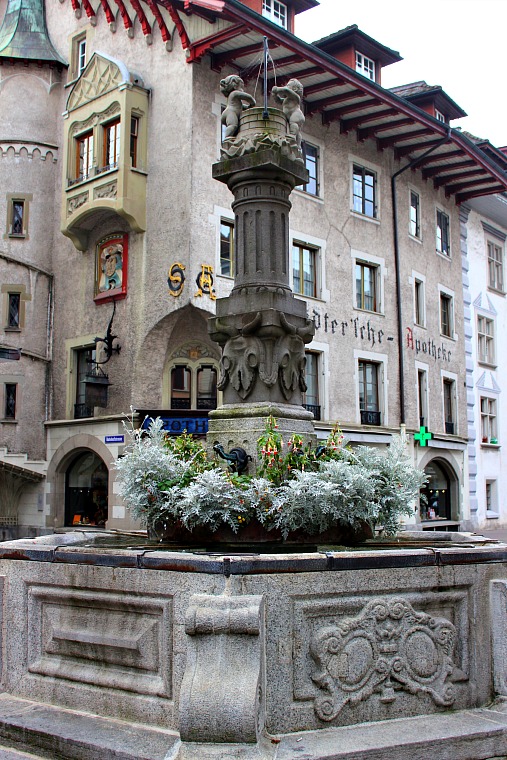 We crossed a bridge and found ourselves in front of the towering Jesuit Church, which was built back in 1666. The booming sound of a pipe organ lured us inside, and wouldn’t you know it, the song that was playing was my wedding song! We silently sat on a pew listening, and I found myself mesmerized by how beautiful and bright the inside of the baroque building is. 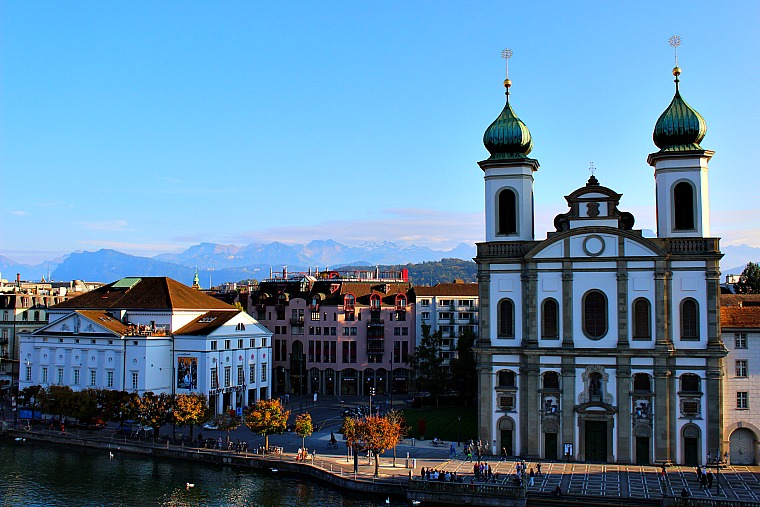 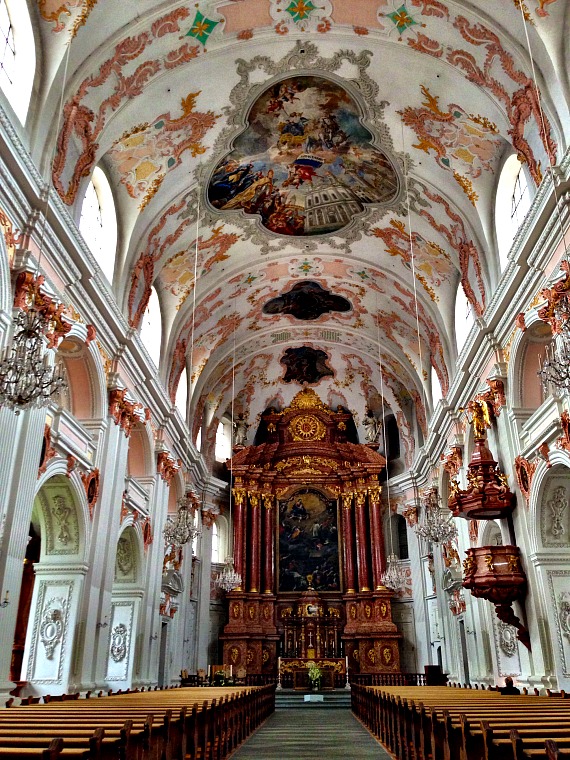 Eventually we tore ourselves away, and continued along the waterfront past a farmer’s market and arrived in front of the famous Chapel Bridge. Children excitedly pointed at the dozens of huge, white swans that patrol the edge of the boardwalk hoping to be tossed some food, as we made our way up the wooden steps of the flower lined bridge, which is the city’s pride and joy. 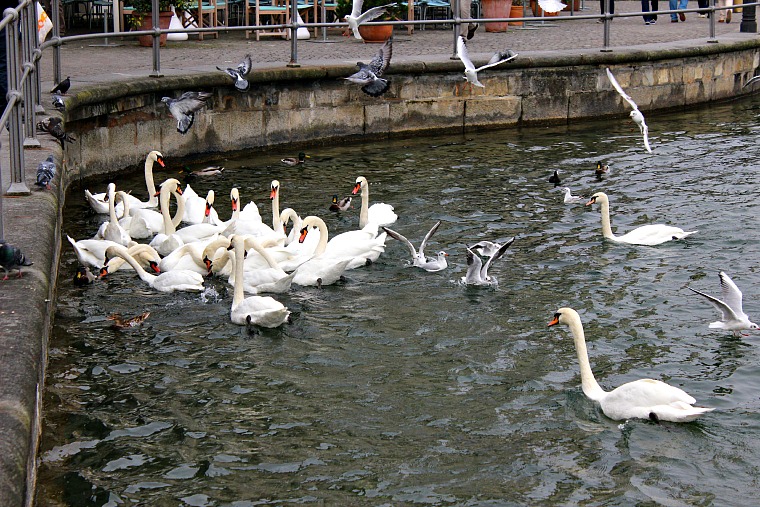 Not so fun fact: the bridge actually burned down in 1993 after a boat that was docked underneath it caught fire—likely because of a tossed cigarette. Nearly two-thirds of it was destroyed, including many of the paintings that decorate the roof. The bridge was completely rebuilt in about a year, and changes have since been made to make it more fire-proof. To this day, it remains the number one attraction in Lucerne.

Crossing back over the water returned us to the action of the Old Town, and the lively promenade which includes grand hotels, restaurants and streets overflowing with shops. We soon found ourselves at another can’t-miss spot: the Lion Monument. 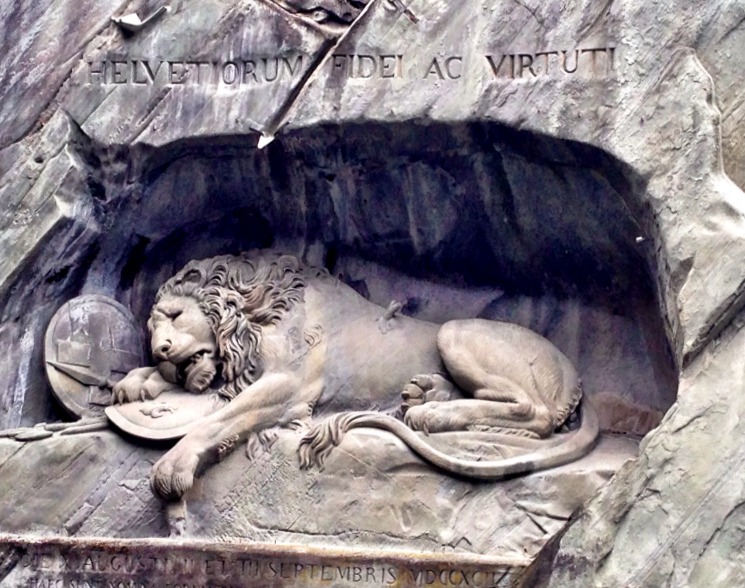 A cobblestone pathway led us to a sheer rock face that has been carved out to depict the ‘Dying Lion of Lucerne,’ which was built to honour the Swiss Guards who died in 1792 during the French Revolution. Words above it say ‘To the loyalty and bravery of the Swiss,’ and the lion is meant to symbolize the heartbreak felt by the guards’ commander who was not there that fateful day. The carving alone is absolutely remarkable, but the site itself is also worthy of a mention. The rock face is partially sheltered by lush foliage, and a serene green pond sits in front of it, creating a beautiful reflection. 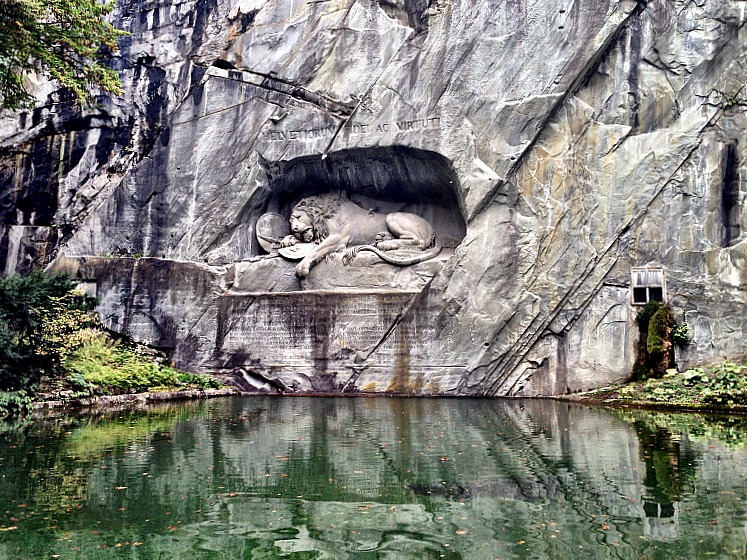 Our time in Lucerne fittingly ended with a stop on the waterfront, to watch the paddle-steamers and boats that offer tours of Lake Lucerne push off from the dock. With Lucerne excursions ranging from one hour to nearly a full day, cruises are the perfect opportunity to get a unique vantage point of not only the ‘Lucerne Riviera’ as it’s fondly called, but also the stunning scenery that rightfully lures so many people to the region. There is also a boat and train package called the Gotthard Panorama Express which ends up in Lugano. 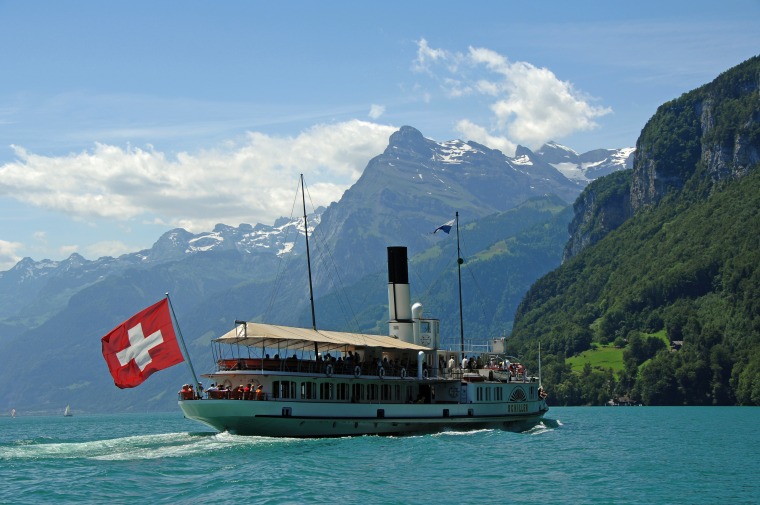 With that, it was time to pack up and say goodbye to lovely Lucerne—and this time, we were sure to get good directions out!

Getting around: Lucerne is quite walkable, and it’s easy to get to each of the main sights on foot. Travelcards offering free public transportation are also included in hotel reservations.

Don’t miss: If you find yourself in Lucerne on a Tuesday or Saturday, head toward the street in front of the Jesuit Church where there is a farmer’s market with fresh fruits, vegetables and blooming flowers. There is also a flea market on Saturdays from May to October.

The best of beautiful Bern, Switzerland—including that bear pit!

How to visit Zermatt, Switzerland on a budget

Globe Guide travelled to Lucerne in partnership with My Switzerland, Lucerne Tourism and Hotel Des Balances. As always, hosts have no editorial influence over articles. 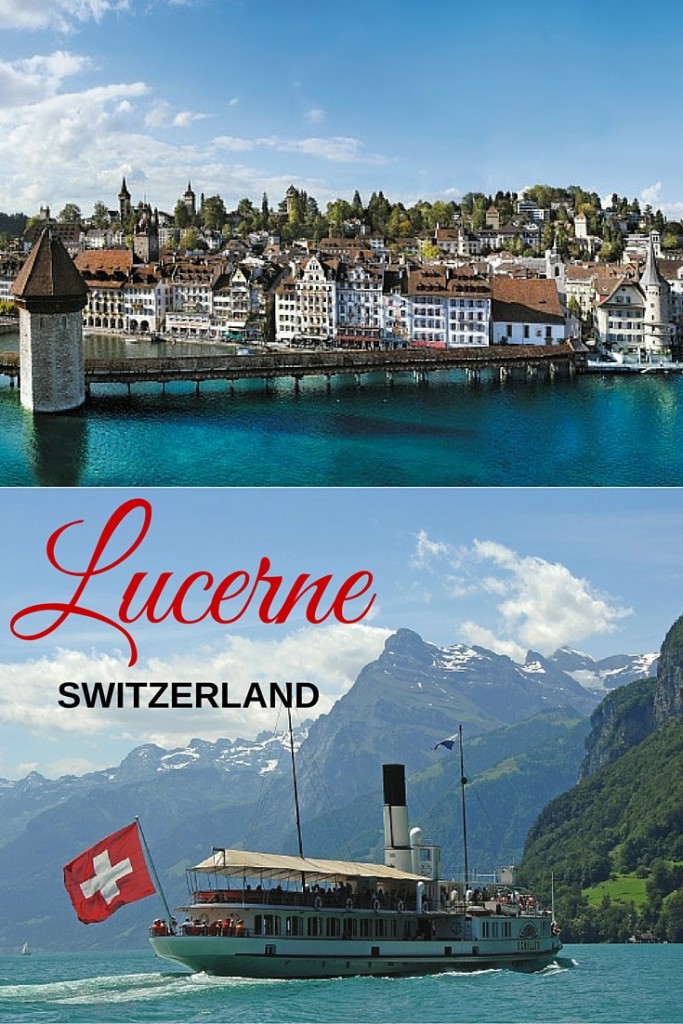