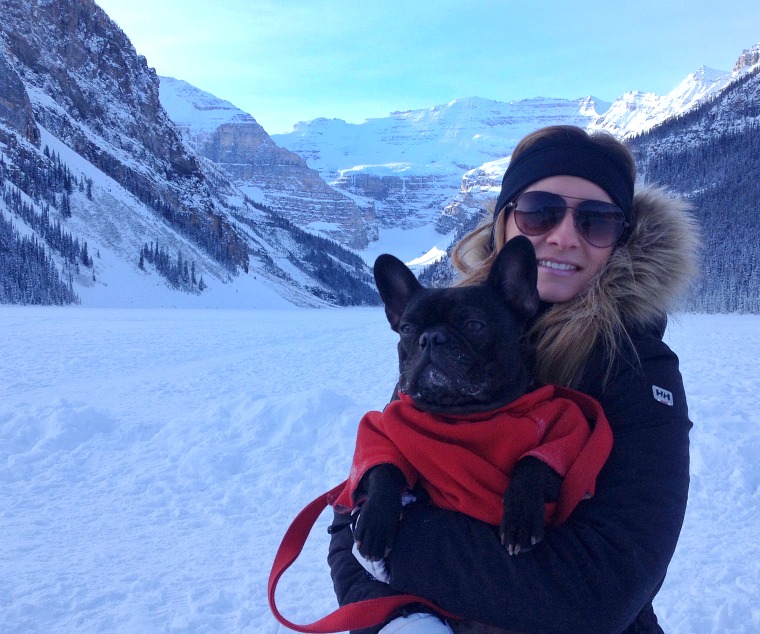 Hanging in Lake Louise, Alberta with my bud Iggy

OK so it wasn’t all bad, like kicking off the year by visiting the Land Down Under. Australia was country #40 and continent #5 for me, so yay for that! 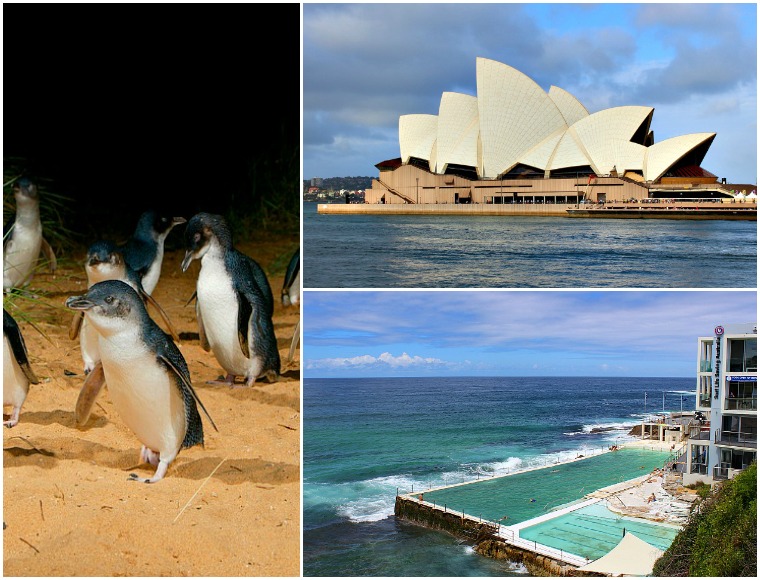 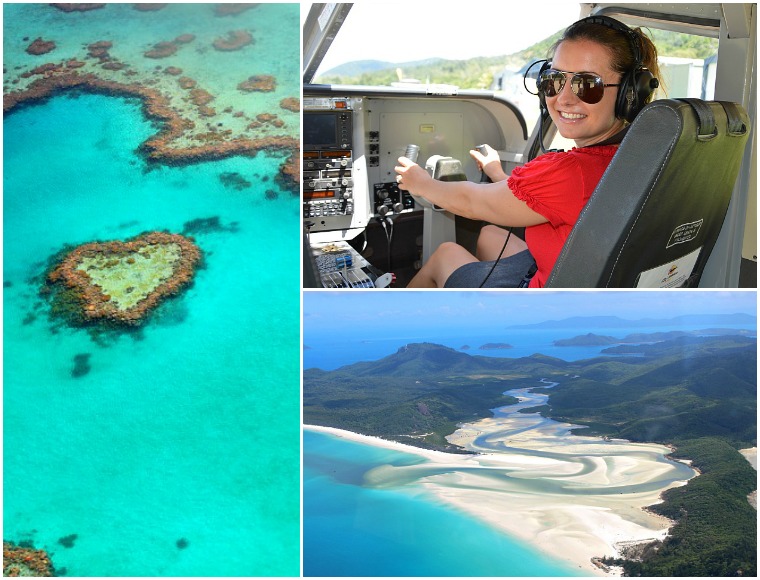 In April, I was thrilled to be accepted into the Travel Media Association of Canada, which is an amazing group of media and industry peeps who are just like me—obsessed with travelling! TMAC has some rather heady requirements to get in, so I’m proud that this little ol’ website of mine is moving on up in the world, and now popular enough to qualify for membership in a national media organization. So, thank you so much dear readers for your loyalty!

Anyway, the annual conference was held in Peterborough, Ontario this June, so I flew out for four days and had a fantastic time meeting members from across the country and enjoying excursions like a boat cruise in the Kawartha Lakes. 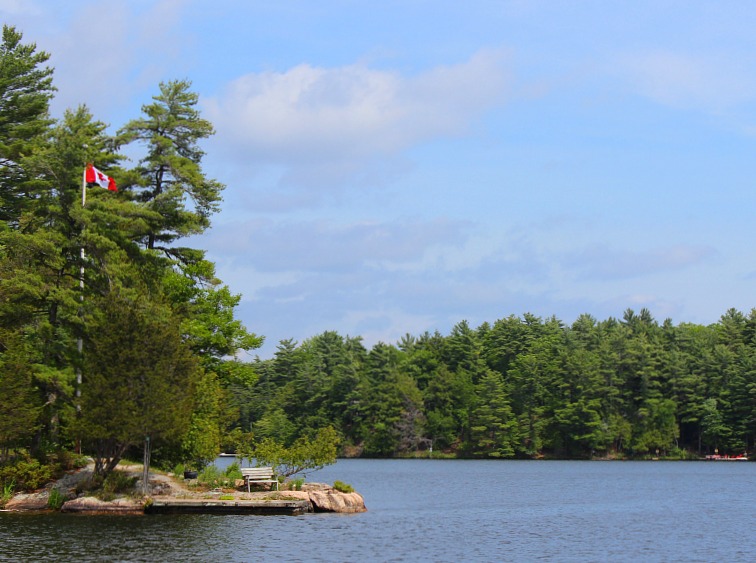 Since I was already out east(ish), I decided to head down to Miami Beach with my husband for a few days for some R&R. My dad used to live in the area so I thought I’d seen it all and would just spend my days lounging around the pool—but boy was I wrong. Apparently Miami Beach is a lot different when you can legally drink! We had a fantastic time checking out the bars, restaurants and shops along South Beach, wandering through the Art Deco district, and yes, working on our tans. I loooove Florida! 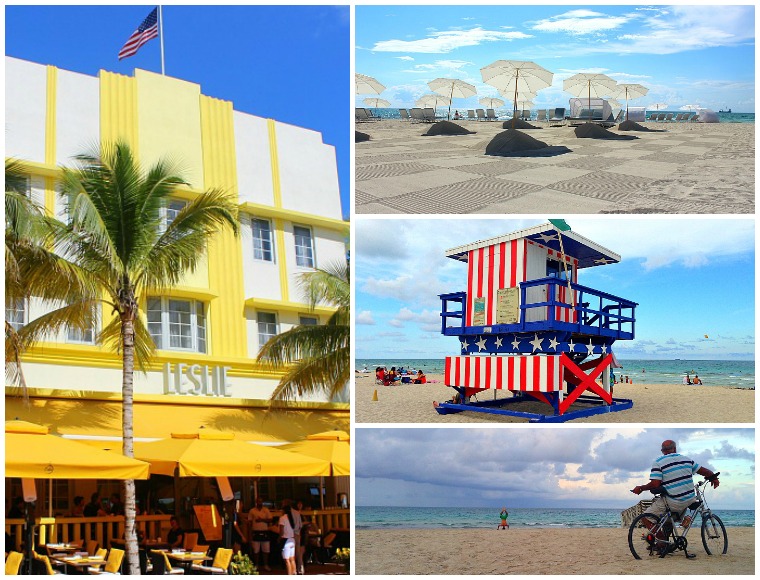 A busy few months of travel continued in July, when I was invited up to the Yukon to explore amazing spots like Kluane National Park, Tombstone Territorial Park and the heritage town of Dawson City where I drank a cocktail garnished with a human toe! Seriously, I did! I can’t say enough great things about the Yukon, and think everyone should try and visit at least once. 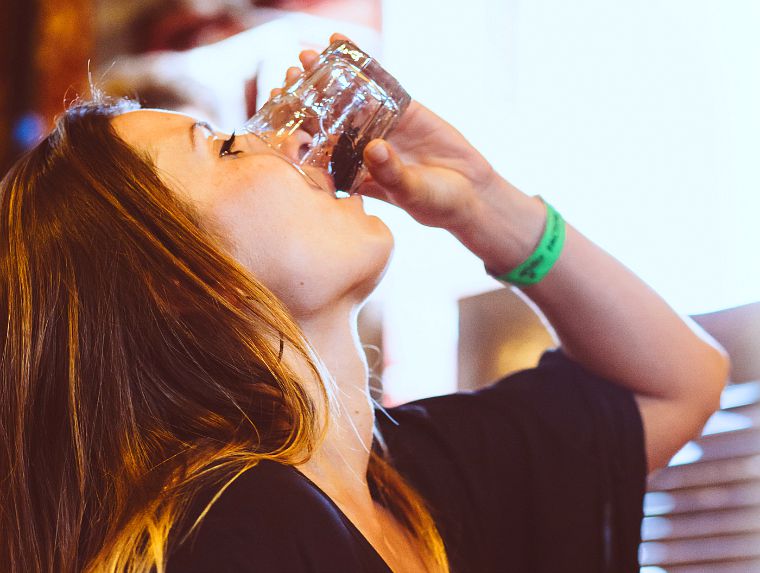 In August, I was invited out to Montreal for pretty much the greatest trip ever: a girls-getaway themed weekend complete with champagne, a luxury hotel stay, paddleboarding and a fashion show, just to name a few highlights. I’d visited once before, but was glad to get some time to explore more of the city, and hang with friends like the lovely Jenn Smith Nelson from Travel and Happiness and my pals Larissa and Michael from Changes in Longitude who happened to be in town. 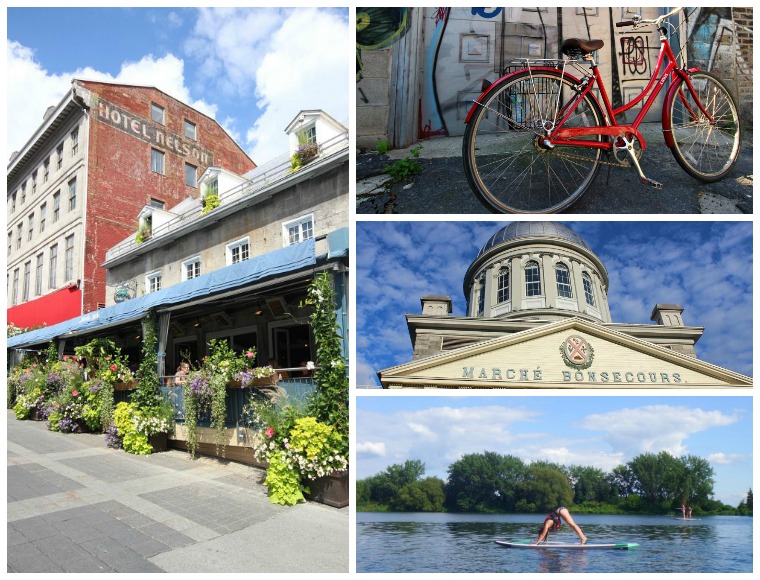 You know how they say bad things come in threes? Unfortunately that trip was the start of my three bad things: my purse was stolen! It could have been way worse (like if my wallet or passport had been inside), but it did cost me over a thousand dollars to replace everything, including two cell phones and a designer purse. A shout out to my fellow writer friends Jenn and Catherine, who graciously shared their notes with me since mine were on my stolen phone. Side note: back everything up, people!

The next month was bananas: just a couple weeks after getting back from Montreal I flew out to New York City for a guys weekend. Yes, you read that right. Predictably we didn’t see much of the city, but I sure know all of the area’s sports stadiums inside and out! 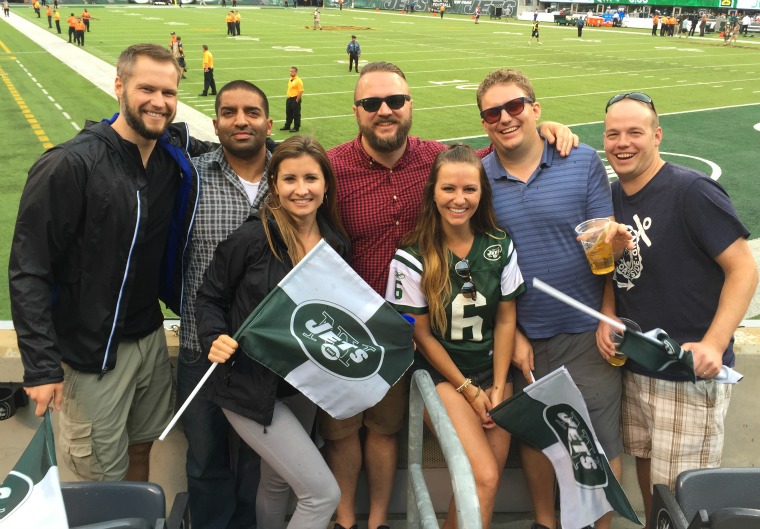 Having a great time at the Jets game

Instead of flying home I got off the plane in Toronto for a work trip (for my boring corporate job that pays the bills). It was only a couple of days long, but happened to be during the Toronto International Film Festival so it was neat to stay in the hub of the action during it. Sadly I have no celebrity sightings to report, but my bestie did see Emmanuelle Chriqui in the lobby of the Fairmont as she was waiting to meet me for drinks! Bah!

I flew back to Toronto exactly one week later for another work trip, and got to take in a Jays/Yankees game in amazeballs seats. That night, I finally figured out why people like baseball! This sudden appreciation for Canada’s team served me well over the coming weeks, when the Jays nearly made it to the World Series. 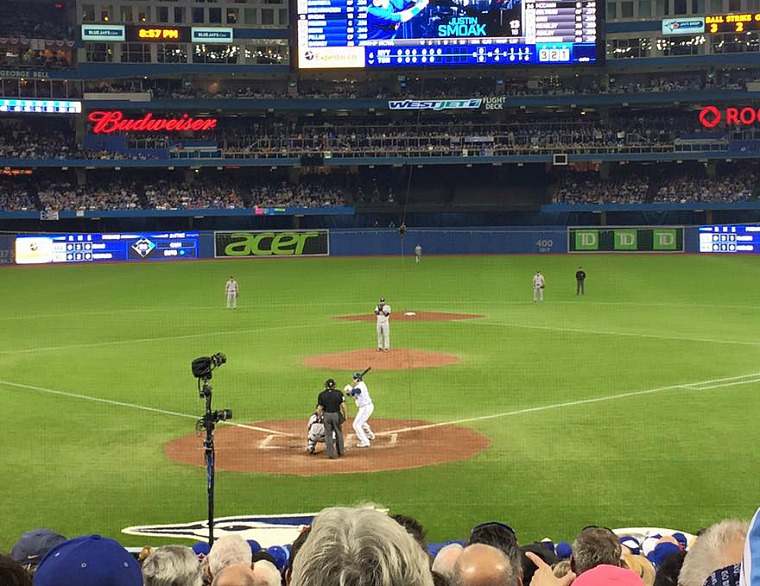 Great seats for the Jays/Yankees game!

So while the summer was a blast…life took a serious 180 come fall. In October, my house got broken into in the middle of the afternoon, and the douchebag made off with electronics, my beautiful leather travel bag (hello Aritzia can you PLEASE restock this?!), some of my personal documents and *sniff* my MacBook Air. So, for the second time in less than two months, I was out thousands of dollars to replace stolen items. My husband also happened to be volunteering in Peru at the time, so I was all alone to deal with everything. Let’s just say it’s not a terribly good feeling when you don’t feel safe in your own home.

Then one month later, the third bad thing happened. Remember my boring corporate job that pays the bills? Yeah, well I got laid off. Because the economy. For those unfamiliar with the situation in Alberta right now, Google “Calgary layoffs.” It’s been terrible, and it’s only going to keep getting worse.

I’ve been wanting to be my own boss since forever, so now’s the time to make it happen. Despite how people (read: my parents) think travel writing works, here’s a spoiler alert—it’s actually a LOT of work. But there is also booze, so that helps. Anyway, I finally have some time to focus more on my freelance work as well as this site that I spend an insane amount of hours on, so hopefully some amazing things will happen in the year ahead!

On that note, back to the fun stuff. I kicked off December with a cool trip: a Viking River Cruise highlighting the Christmas markets in Hungary, Austria and Germany. Guys, if you haven’t done a river cruise yet, get on it. Everything is too easy! After docking in Nuremberg, my husband and I drove to Switzerland for a couple days of skiing before heading to France where I celebrated my 30th birthday (eek) in gorgeous Annecy. With champagne, naturally. 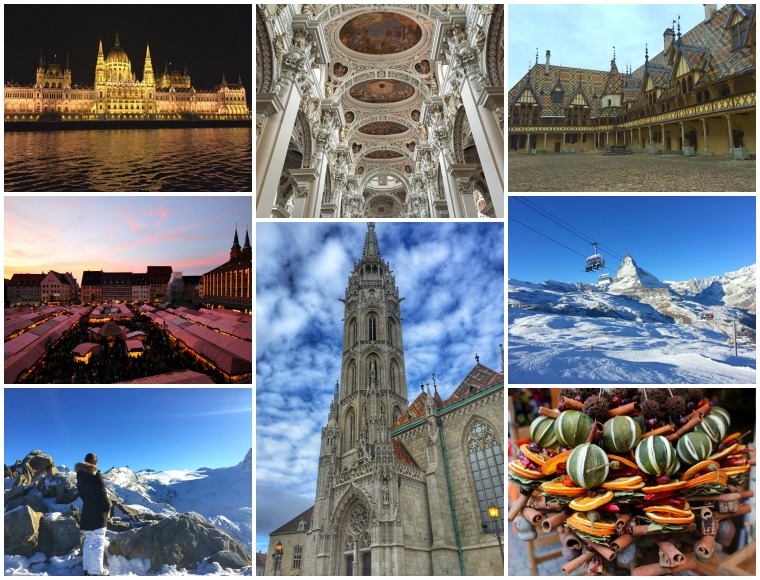 The last trip of 2015 was spent celebrating Christmas in the Rocky Mountains. We stayed just outside of Canmore, skied, and went skating on gorgeous Lake Louise. It was bloody freezing, but beautiful! 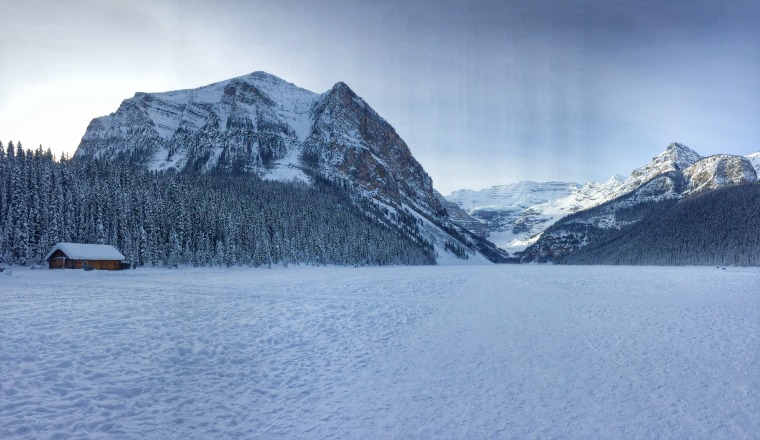 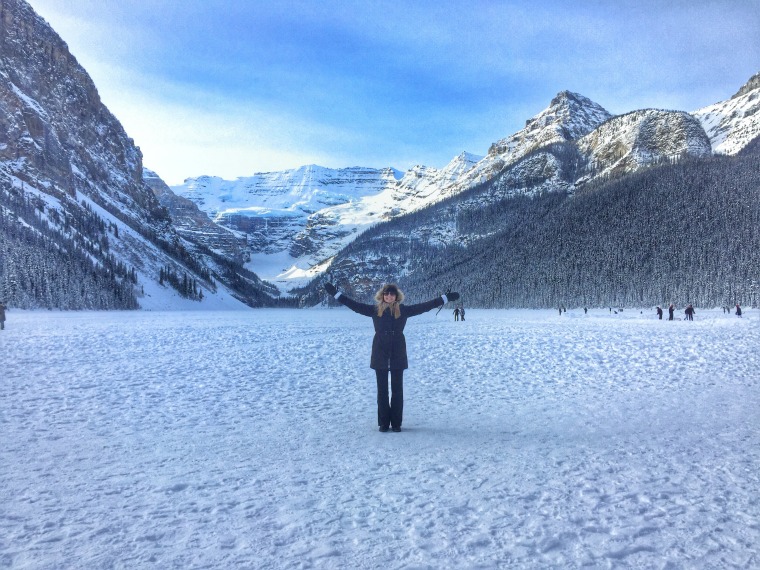 So what’s up for 2016? So far, lots! I’m heading to a fun event called Jasper in January, then out to gorgeous Quebec City for Carnival. I’ve been wanting to go FOREVER (and snap a selfie with that cute Bonhomme), and will also be sleeping in an ice hotel!

At the end of February I’m flying back up to the Yukon to hopefully cross something off my bucket list: seeing the Northern Lights. Then in June, the 2016 TMAC conference is being held in Nova Scotia, which means I’ll finally get to see Canada’s east coast. So I guess you could say this is the year of exploring more of my own country (and good timing too—the Canadian dollar is s#$% right now).

So, that was my 2015 in a nutshell. Cheers to all of you for following along with my journey for all these years, and I hope you have a spectacular 2016. I sure plan to!

Bucket list accomplishments: 3 (cuddling a koala, visiting the Whitsundays and skiing in the Alps) 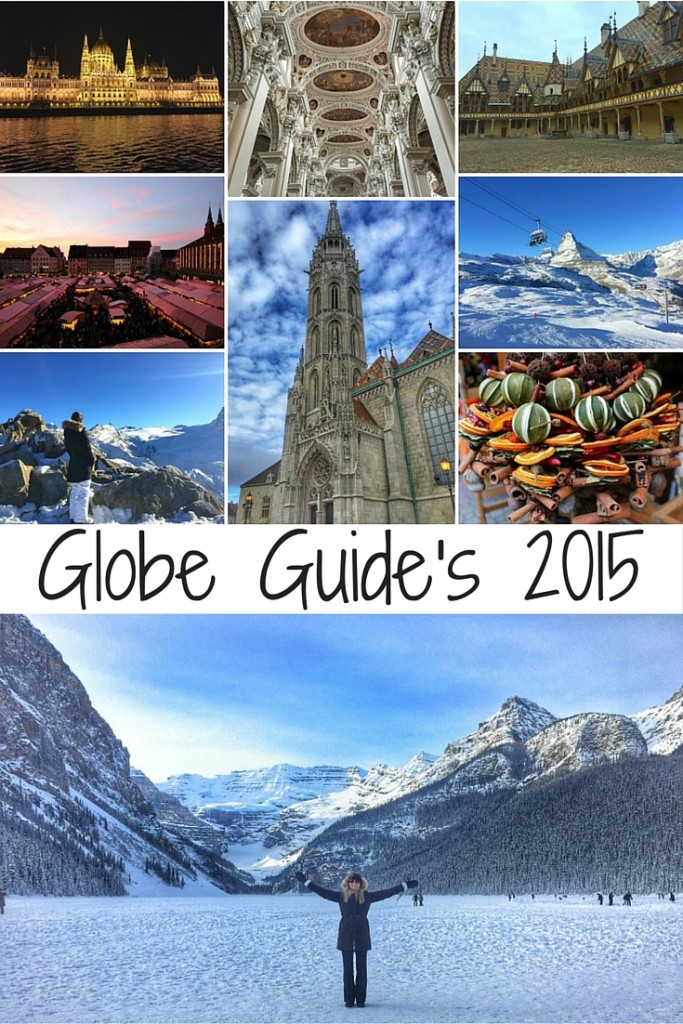