A complete guide to visiting Multnomah Falls in Oregon 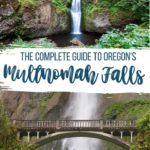 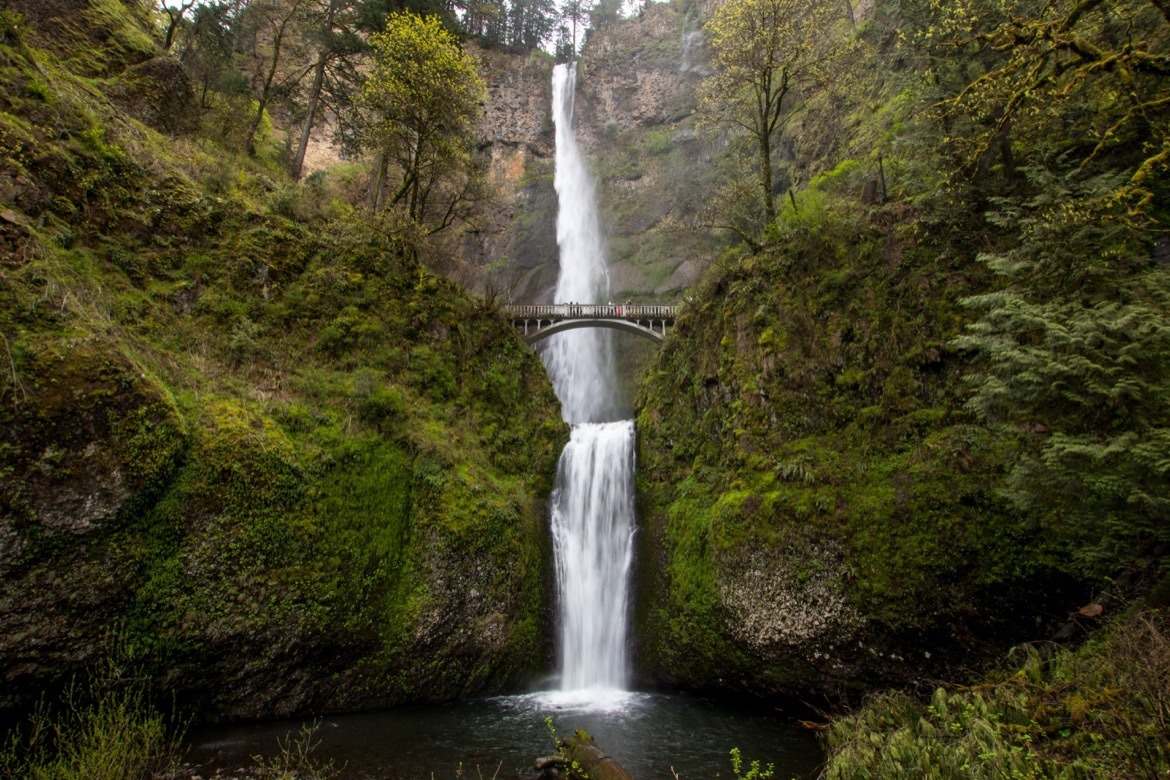 Oregon’s Columbia River Gorge is famous for its spectacular waterfalls, and Multnomah Falls is the crown jewel. At 620 feet it’s the highest of the Gorge waterfalls, and the surreal sight of the water bursting out of the rocky crevasse makes this a popular day trip from Portland.

Fed by underground springs from Larch Mountain, this is one of the area’s best places to study geology exposed by floods, and if you look closely, you can see Yakima basalt flows in the falls’ mossy cliff face. Towering Multnomah can be seen right from the I-84 Highway which winds through the scenic Columbia Gorge, and those who visit are treated to astounding views of the falls, river and surrounding gorge from the walking paths. 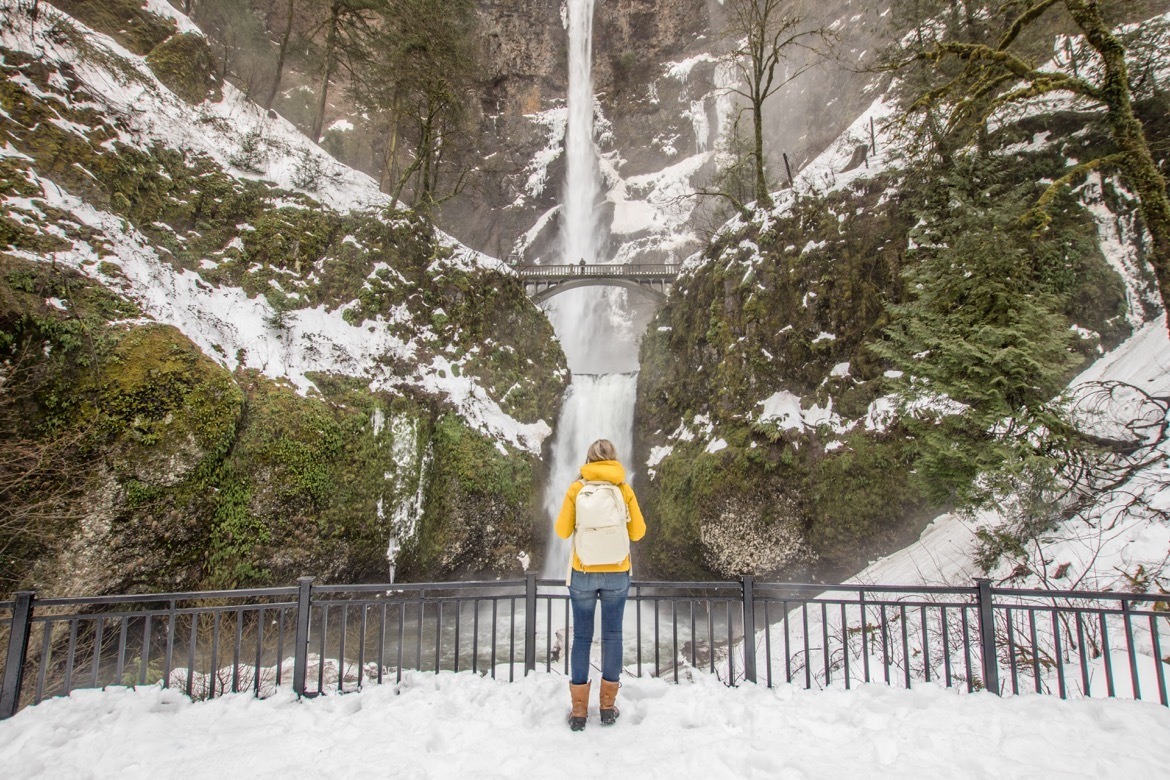 It takes about an hour to drive from Portland to Multnomah Falls heading east on I-84, and about 30 minutes from Hood River going west. The Multnomah Falls parking lot is a bit tricky because it’s actually in the middle of the highway, so be sure to stay in the left lane as you approach the turnoff.

No matter which direction you’re coming from the scenery is spectacular, and there are a number of other waterfalls to stop at along the way including a handful on the Historic Columbia River Highway which runs parallel to I-84.

Here’s a map of Multnomah Falls:

Note: In summer 2021, the Forest Service implemented a reservation system due to high traffic volumes. Read more about it here if you plan on driving your own vehicle.

READ MORE: What to do in Hood River Oregon: A complete travel guide 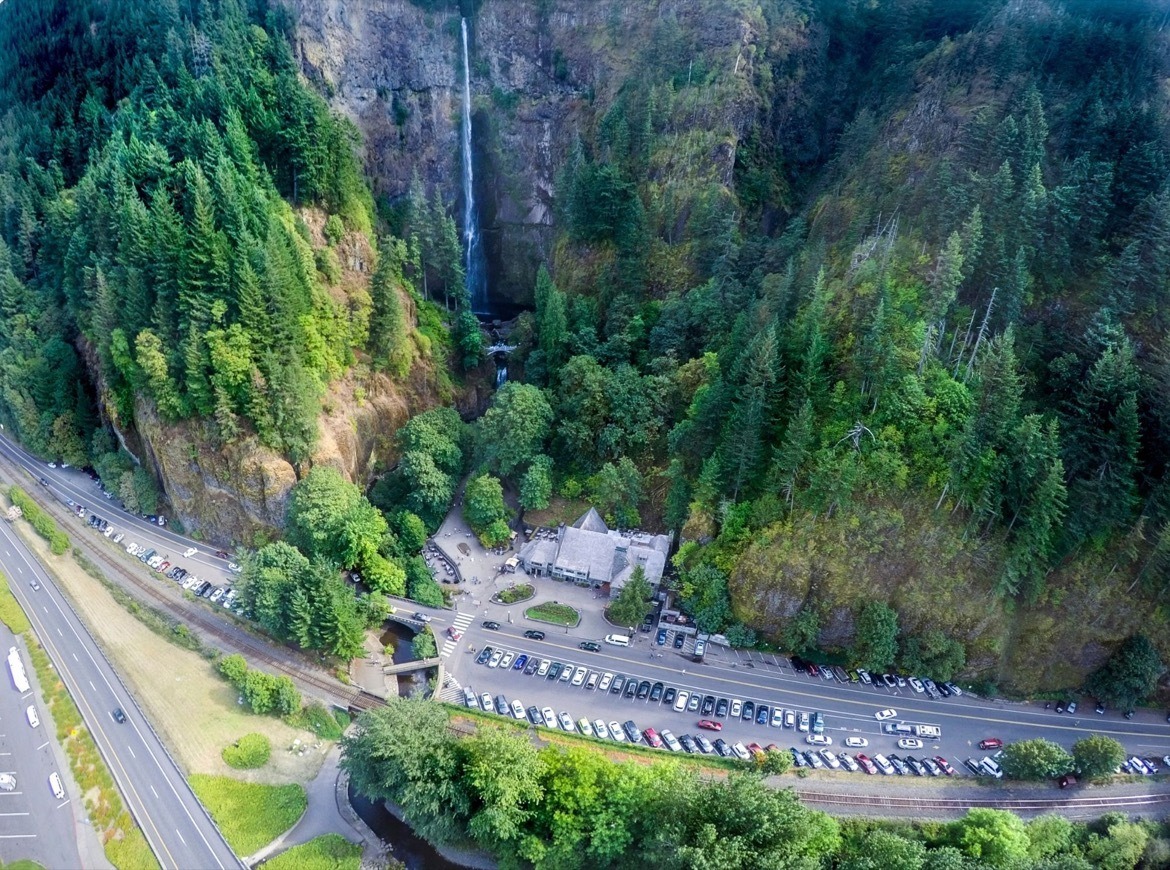 The parking lot at Multnomah Falls

Don’t have your own wheels? No problem; there are a number of companies that offer guided tours and even scenic flights of Multnomah Falls, and often combine them with wine tasting in Hood River or hikes to other waterfalls: 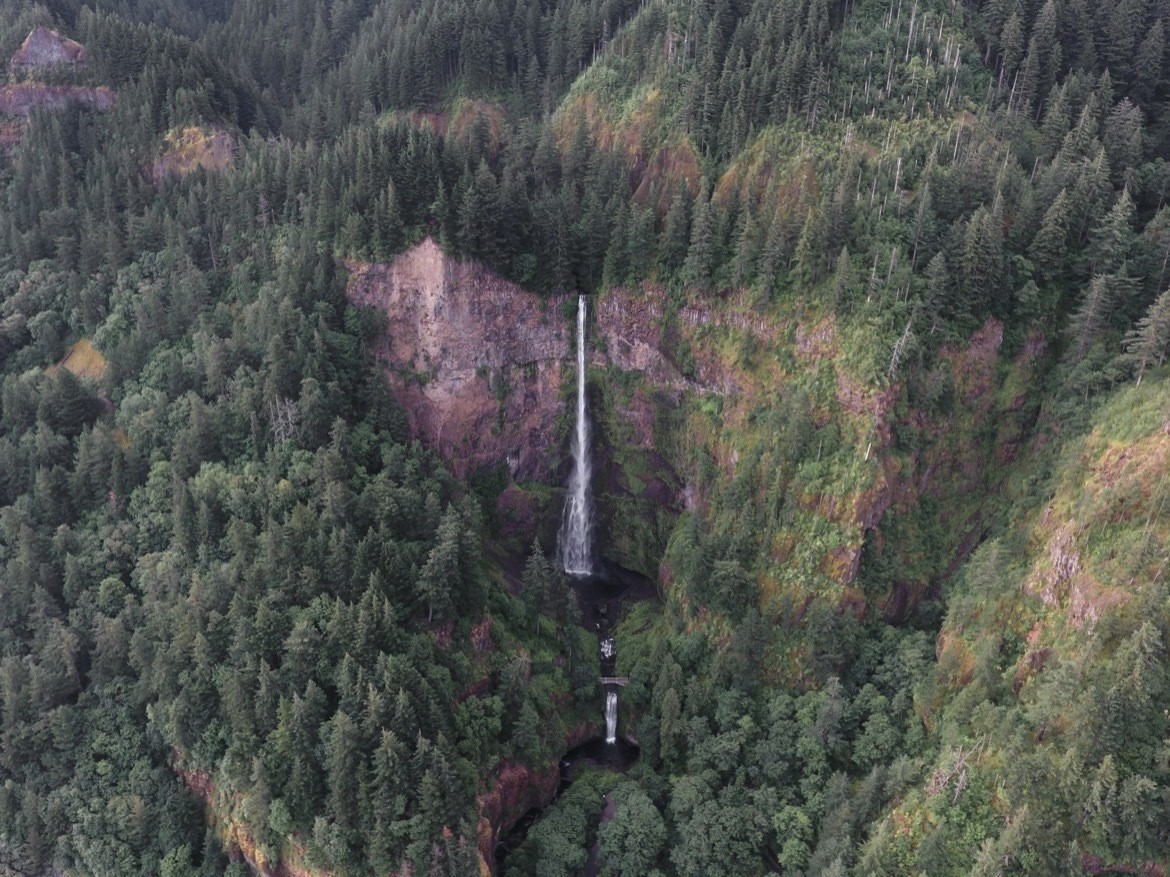 The view of Multnomah Falls during a scenic flight

The consistently temperate (albeit rainy) weather in the Columbia River Gorge means you can easily visit year round. Multnomah Falls looks its best in spring when the snow starts to melt and creates a big runoff that makes the falls even more powerful, and colourful wildflowers line the trails.

Of course it’s still beautiful in summer and spring and the weather is typically better, though there will be more crowds and the parking lot often fills up–after all, the site typically sees two million visitors each year, making it the most visited natural recreation site in the Pacific Northwest. 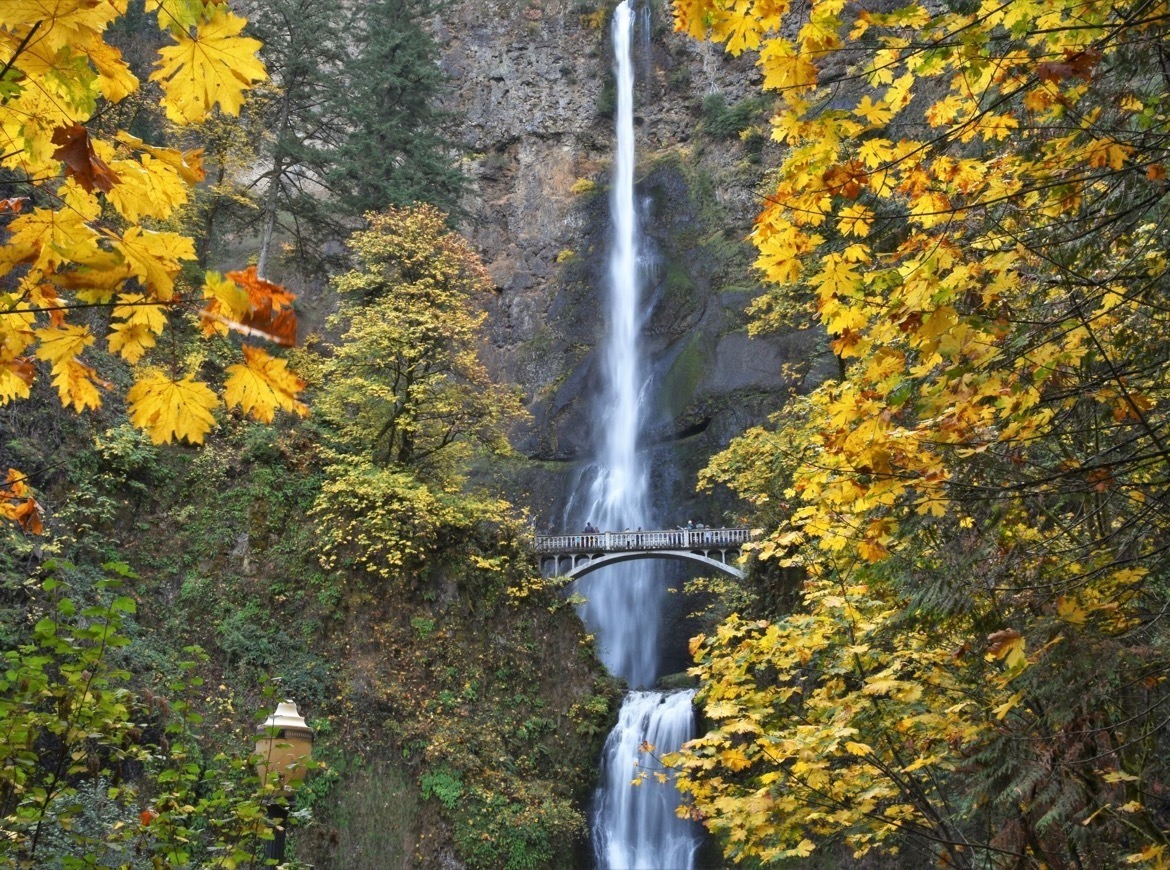 Multnomah Falls in winter is spectacular, and if you time your visit for right after a big snowfall you’ll get to see white snow blanketing the rugged cliff sides and ice crystals forming on either side. Be sure to pack snow gear like footwear with good grips and hiking poles if you have them, since the snow drifts can pile up waist-high.

Keep in mind most of the Multnomah Falls hikes are closed at this time, so you’ll either have to stick to the main viewing platform at the base or scramble up to Benson Bridge. 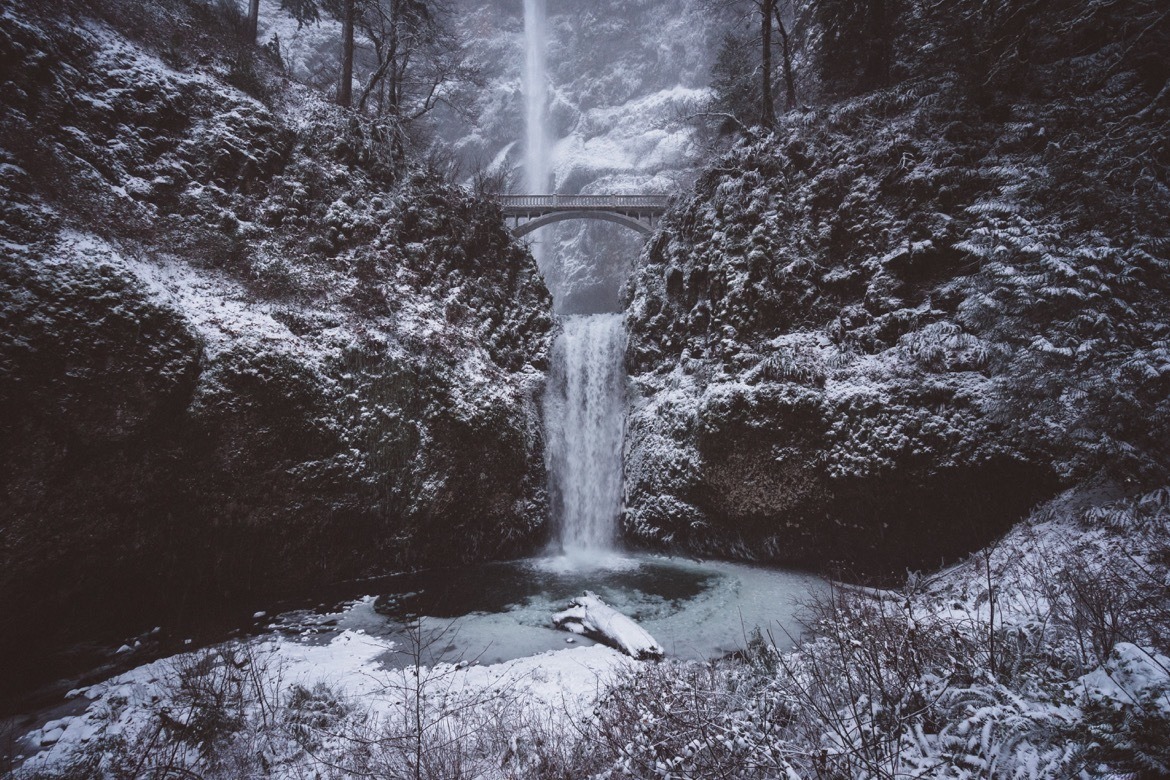 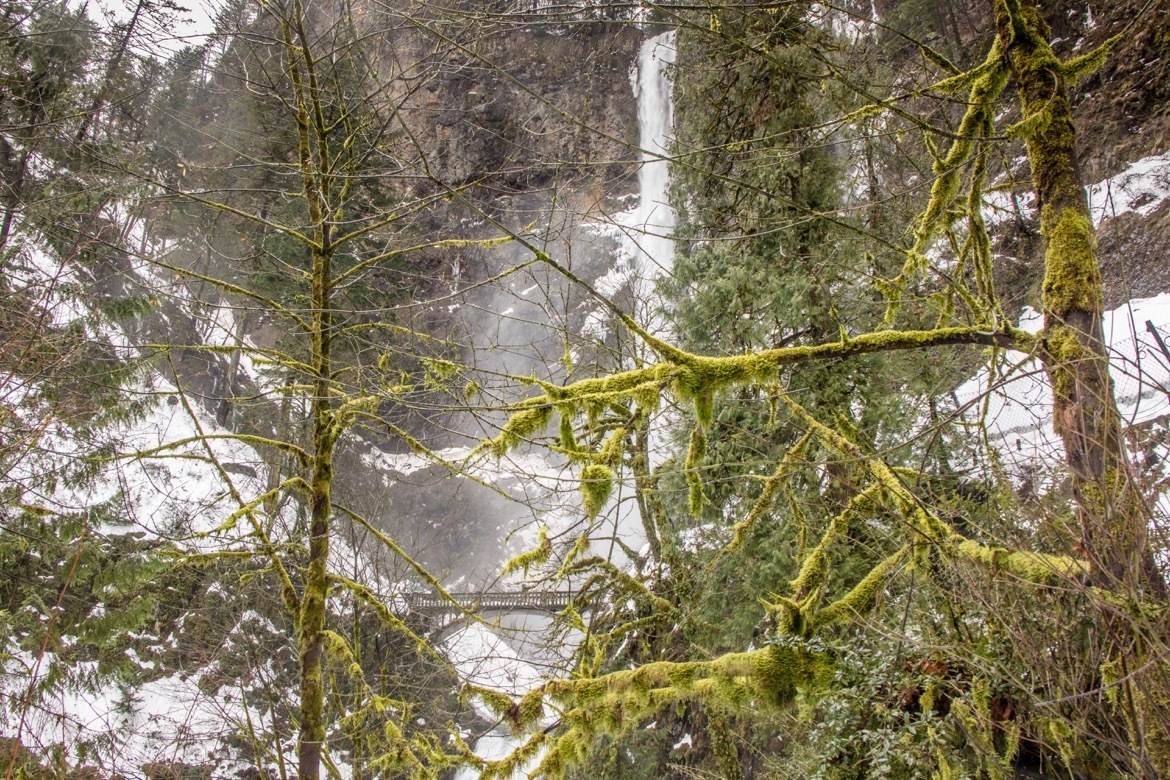 The lodge that welcomes visitors at the base of the falls dates back to 1925, and was designated as America’s first National Historic Landmark. Inside you’ll find a restaurant, snack bar, gift shop, washrooms and an information centre with trail maps for the falls and surrounding Gorge.

Northwest Forest Passes which are required for some area parks are also available for purchase at the Multnomah Falls visitor centre. 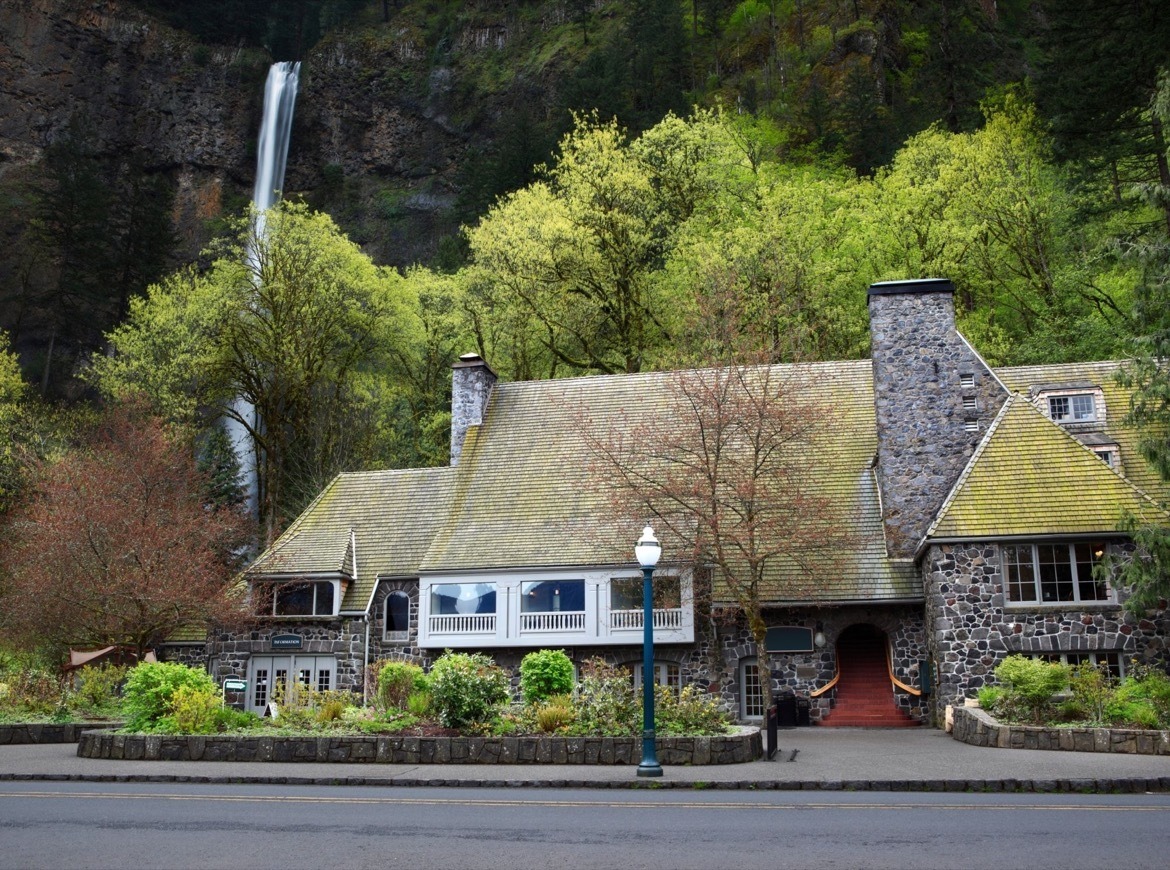 Multnomah Falls hours: Visitors are welcome from 9 am-6 pm daily, and there is no entrance fee.

From the parking lot, visitors pass along Multnomah Creek and under the Historic Columbia River Highway to get to the entrance, where a short paved pathway leads to a lookout point which is the best vantage point for seeing the whole falls, iconic Benson Bridge and the pooling water below. 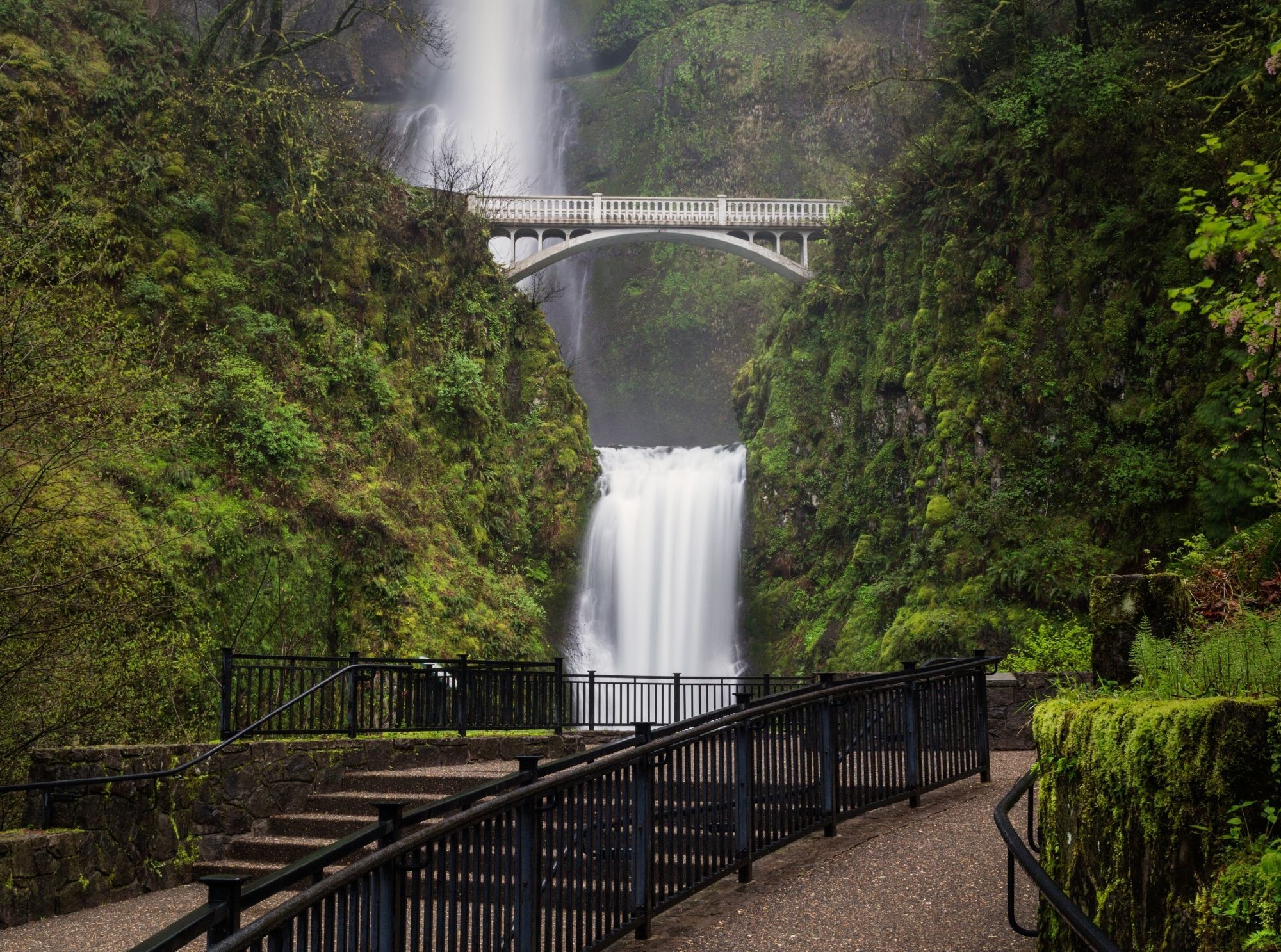 The Multnomah Falls trailhead is just off to the right, which leads to: 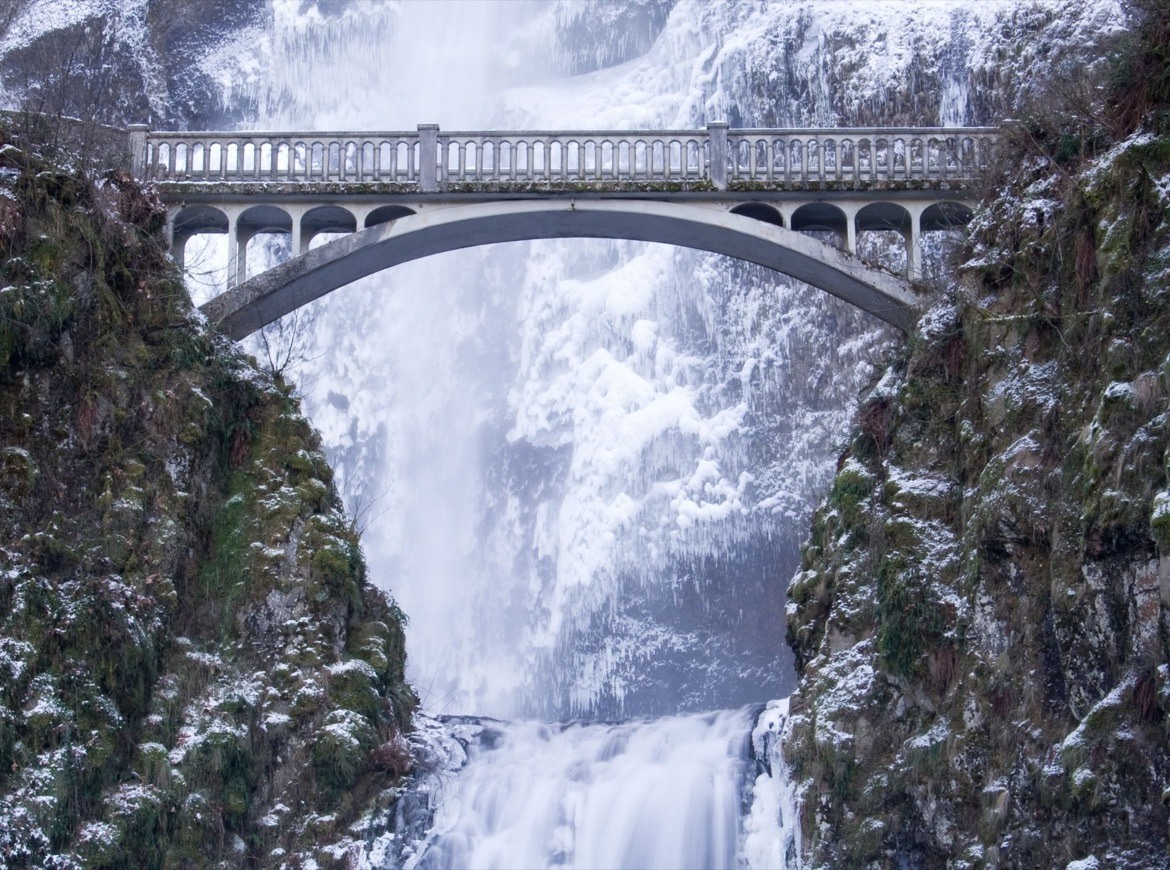 The trail up to Benson Bridge is short but steep, and from there you can continue to the top of the cliff to a small viewing area that looks down on the falls (a total distance of 2.4 miles return). The most demanding Multnomah Falls hike is the nearly seven mile climb up to Larch Mountain, which winds through an old growth forest and passes tranquil cascades and Ecola Falls.

The reward at the top is panoramic views of peaks including Mount Adams, Mt Hood, Mount Rainier, Mount Saint Helens and Mount Jefferson.

There isn’t any Multnomah Falls lodging directly on site, so the closest towns to the falls are Cascade Locks and Hood River in Oregon, or Stevenson, WA.

You can also go camping near Multnomah Falls by booking a site in Wyeth, Ainsworth State Park, Benson State Recreation Area or the Eagle Creek Overlook Group Campground. All of them are a quick drive to Multnomah Falls, as well as nearby Columbia Gorge waterfalls like Latourell Falls, Horsetail Falls, Bridal Veil Falls and Wahkeena Falls. 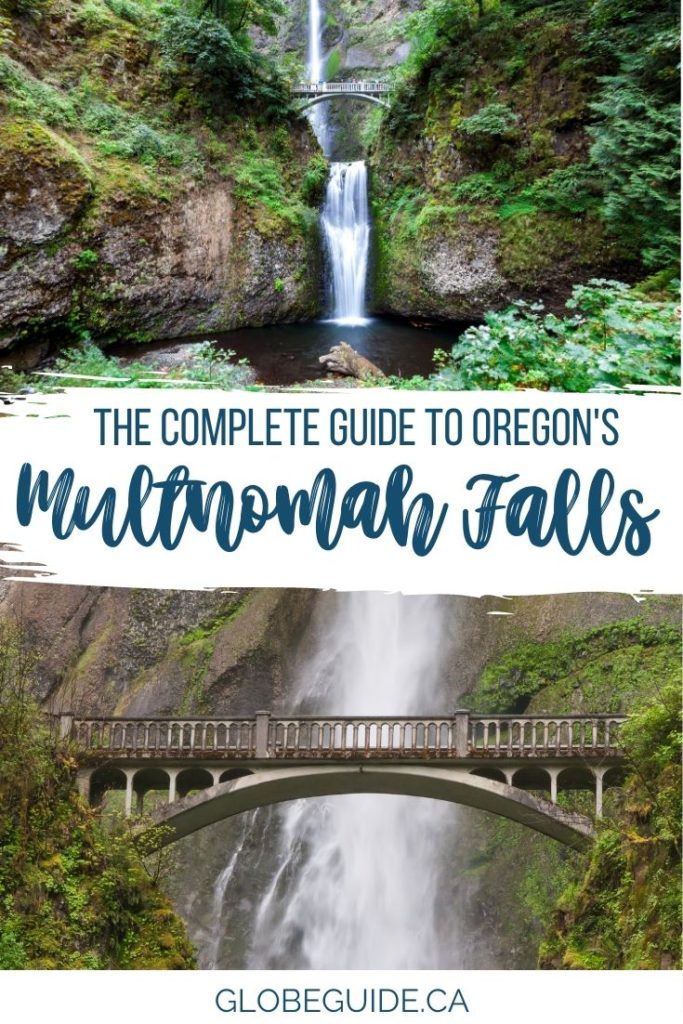 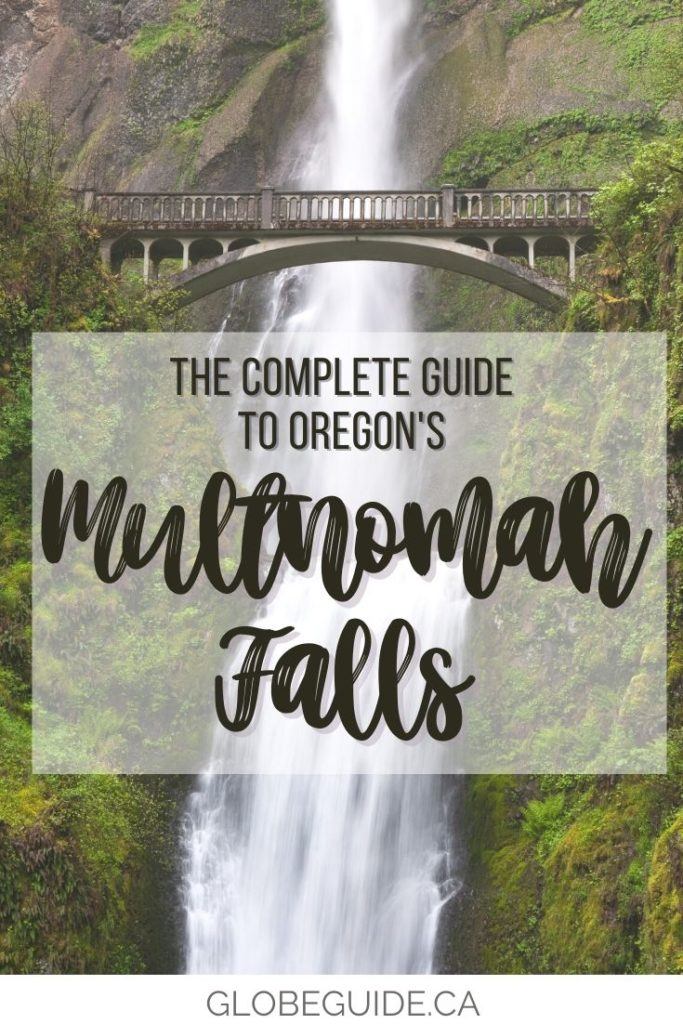 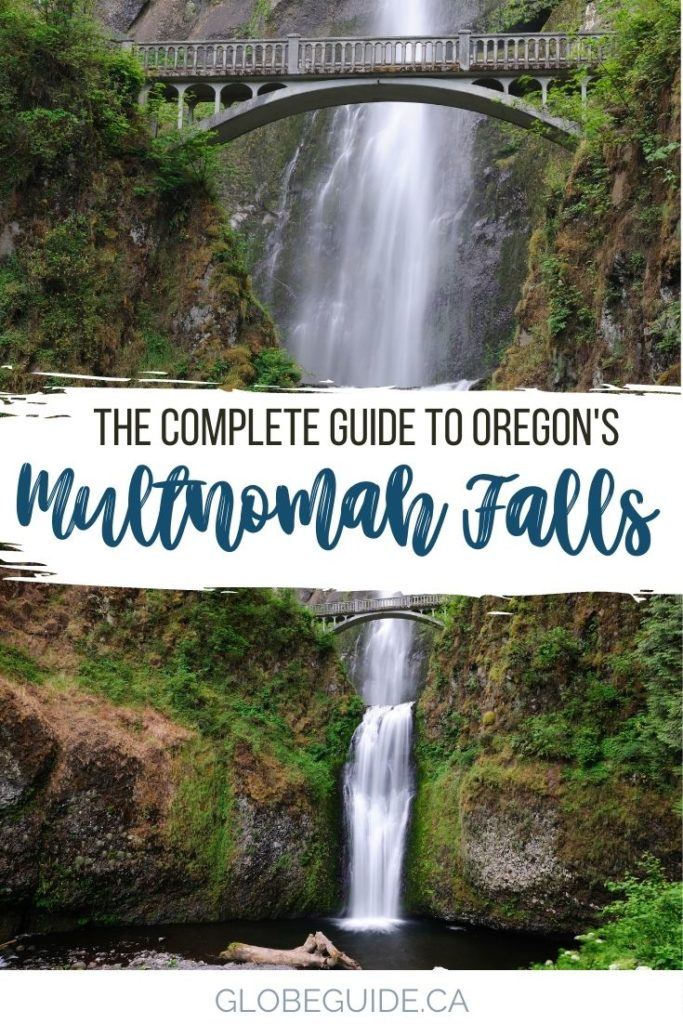