The Sydney Coastal Walk: A scenic stroll from Bondi Beach to Coogee Beach 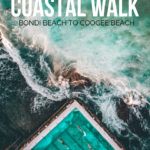 Sydney, Australia’s claim to fame is the architectural marvel Opera House, and after taking in its splendour many visitors spend the rest of their time hoofing it around the beautiful city trying to soak in as many other sights possible. Well, there’s another spot that’s just as memorable as far as views go, yet is overlooked by many: the Sydney Coastal Walk from Bondi Beach to Coogee Beach. 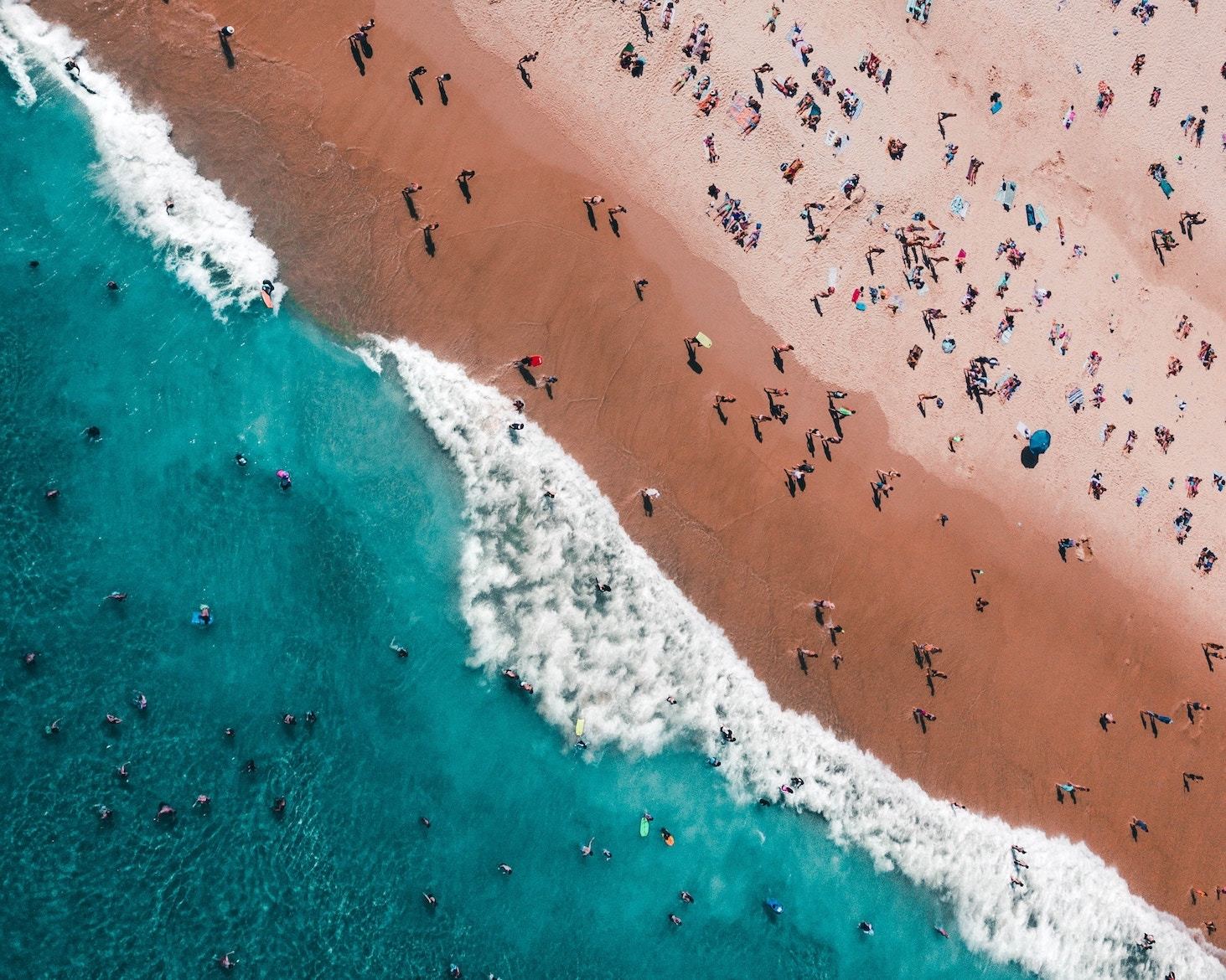 The 5.5 kilometre pathway winds along a spectacular coastline in the city’s eastern suburbs, rewarding those who make the trek with dramatic views of the churning turquoise ocean crashing into the cliffs below. A popular route for runners who proudly display their tanned skin and enviable abs, the pathway passes by five beaches, a marine reserve, countless surf spots and parks.

Here are some of the highlights, which make it easy to see why the Bondi Beach to Coogee Beach walk should be on everyone’s Sydney itinerary.

READ MORE: The best things to do in Sydney, Australia in just two days 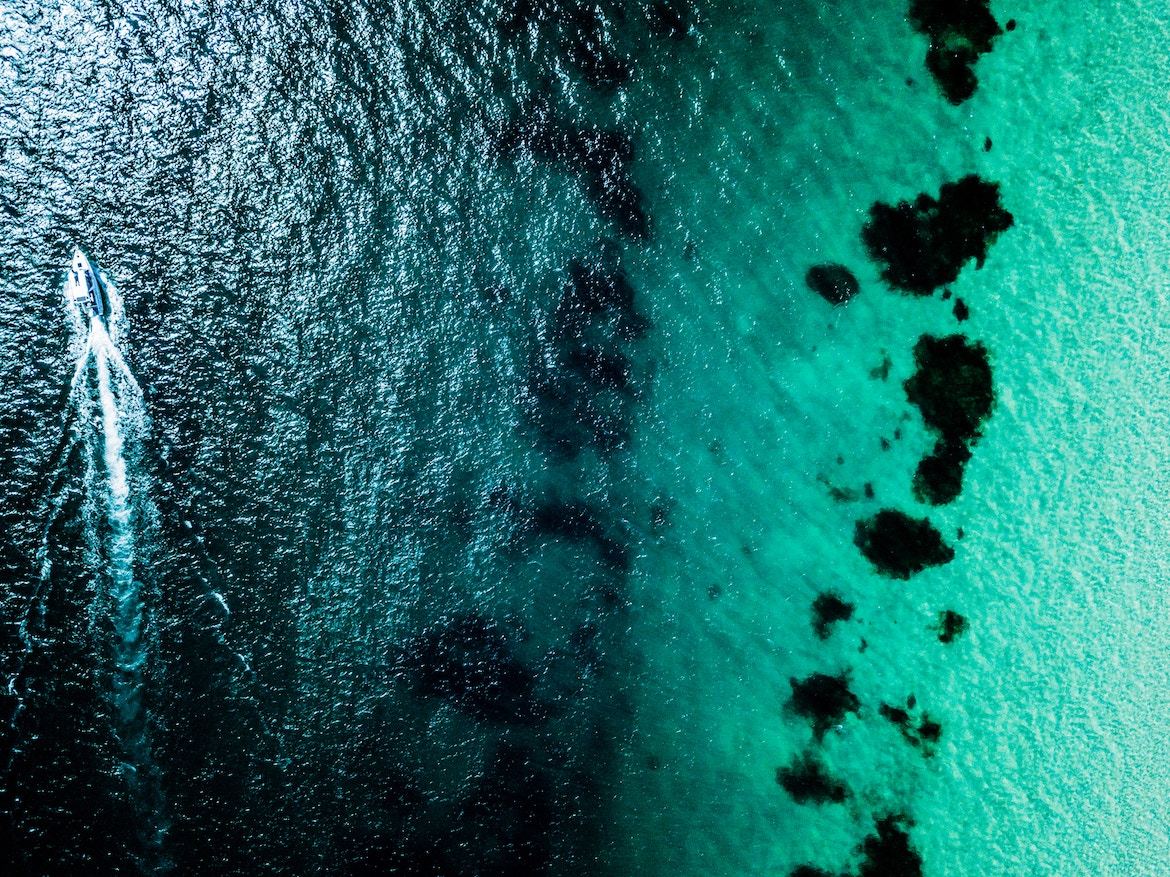 The most famous of the bunch, Bondi Beach is where most visitors start the journey (unless they get caught up in the action and can’t bear to tear themselves away). Arguably one of the most famous beaches in the entire world, the sparkling golden sand lures thousands of sunbathers to its shores, who spend the day soaking up the sun or grabbing their boards and hitting the famous surf. 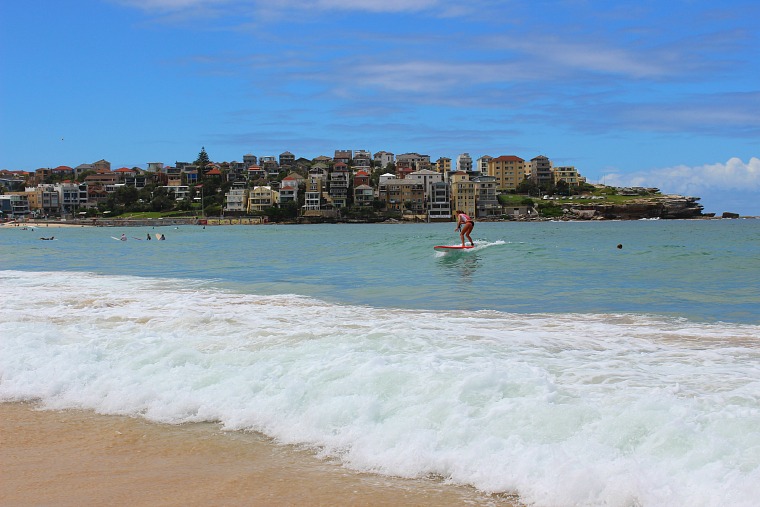 The art-lined promenade is the gateway to Bondi, stretching along the beach all the way from the huge homes that overlook the ocean to the can’t-miss Bondi Icebergs Club. 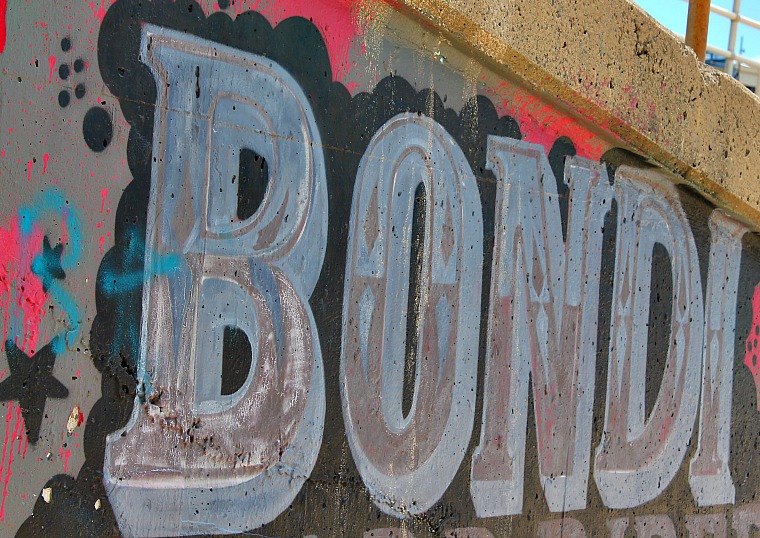 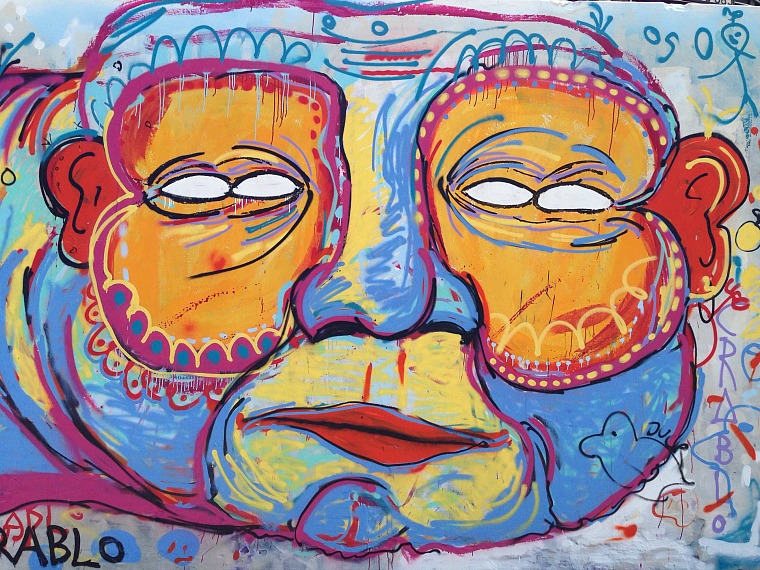 It would be easy to spend an entire day just at the club, whose piece de resistance is an unbelievable infinity pool where fierce waves tumble over the rocks and crash right onto swimmers—making it critical to time your breaths appropriately if you plan on doing laps in the far lane! The Bondi Icebergs pool area boasts facilities such as showers, a sauna, towel rental, wheelchair access and a lounge area, and best of all it’s open to the public for a relatively low day rate.

There’s also a lounge and restaurant on-site, and if you’re lucky enough to score a seat on the patio you’ll enjoy epic views of the beach stretching out below. 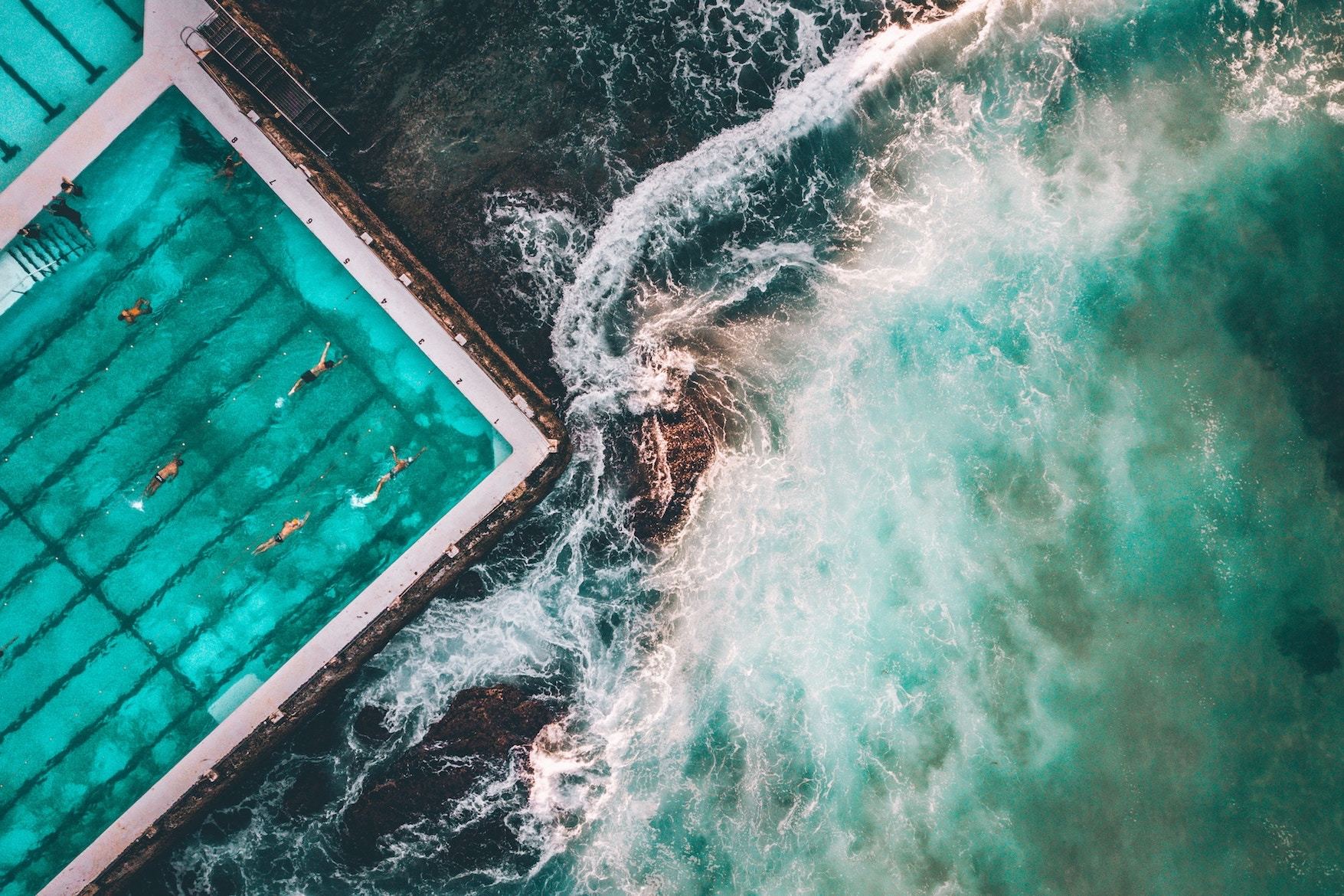 Once you manage to tear yourself away from Bondi, head up the stairs to Notts Avenue and follow the winding pathway which flows past sandstone rock faces, luscious tropical green foliage and azure water washing over untouched, shimmering sand. 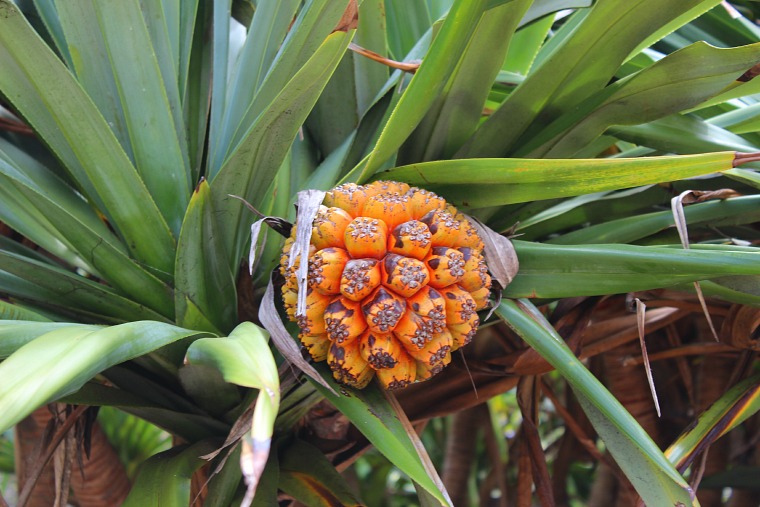 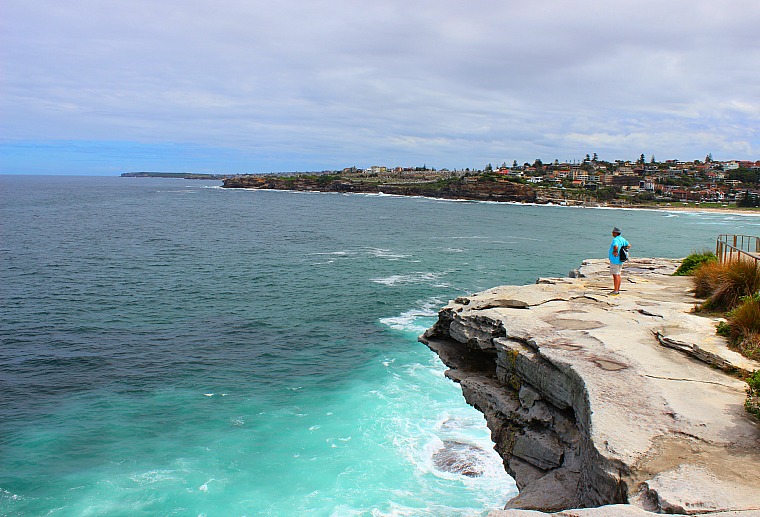 Next up is Tamarama Beach, a small spot that packs a punch. The area is known for having strong waves, making it a favourite of surfers and not-so-popular with swimmers, given that the beach itself is quite narrow. 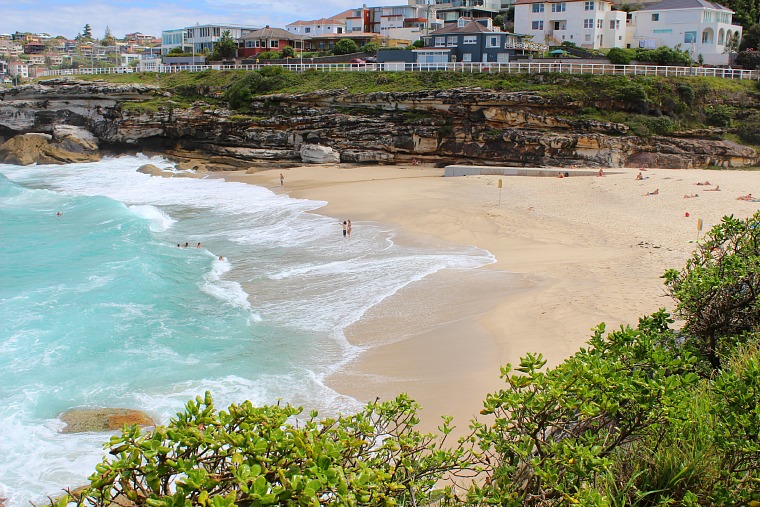 It also used to be home to an amusement park which included a roller coaster that went over the water, and was nicknamed ‘Glamarama’ after becoming a popular spot for the gay crowd. 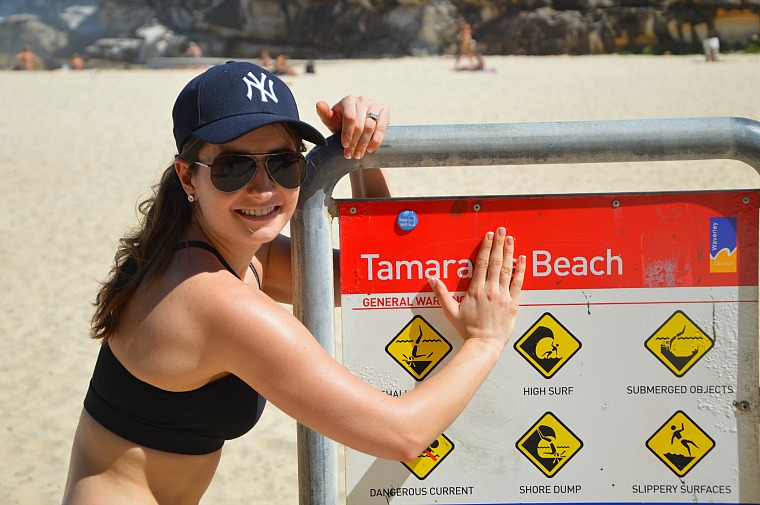 After another 10 minutes along the Bondi to Coogee walk, you’ll arrive at Bronte Beach. This beautiful spot features a wide swath of white sand and an amazing infinity pool called Bogey Hole, which makes Bronte a more chilled-out version of Bondi.

There are lifeguards on duty as well as shower facilities, a park, nearby cafes and a picnic area which is perfect for families or setting up a a romantic date. 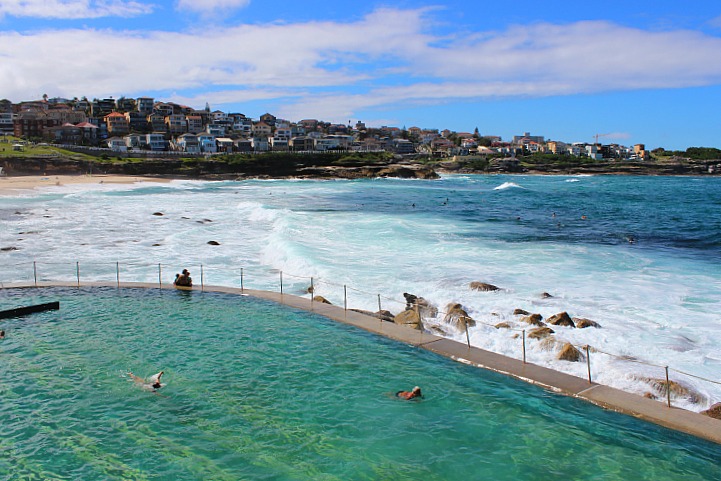 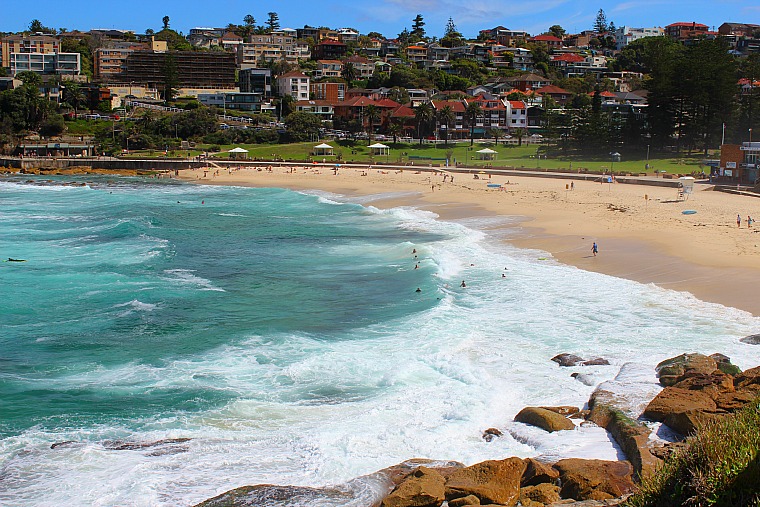 The next landmark south of Bronte is a rather unexpected one: the sprawling Waverly Cemetery. Nicknamed the “most scenic burial ground in the world,” white crosses and monuments pop out of a green hillside and are framed by an expansive view of the deep blue ocean below. Definitely not too shabby as far as final resting places go. 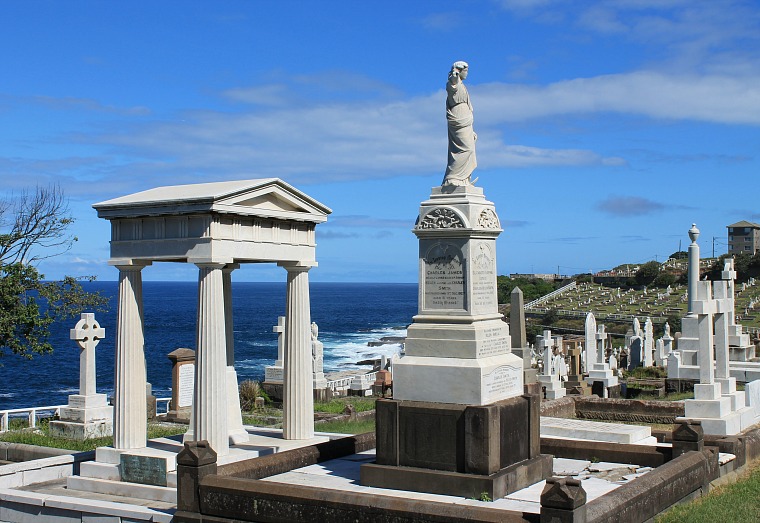 A wooden boardwalk winds past the cemetery, twisting and turning around the steep cliffside past Clovelly Beach, which despite being lined with concrete is also a family favourite. But just around the corner is one of the most gorgeous areas along the Coastal Walk: Gordons Bay. 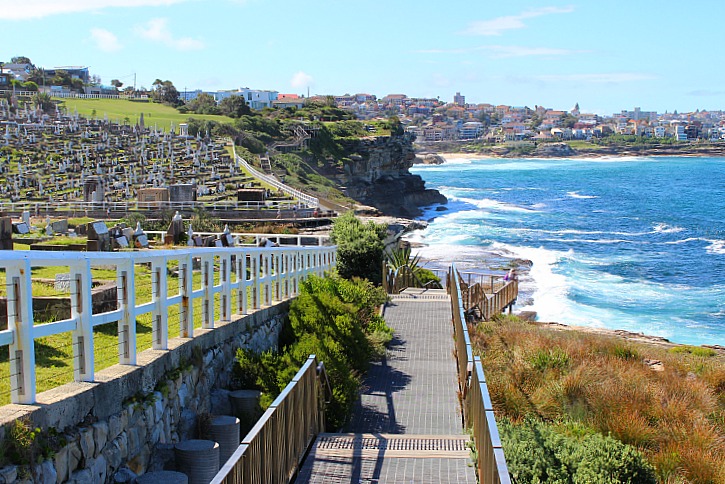 One of Sydney’s most popular dive spots, Gordons Bay is a protected marine reserve area which has rightfully been given the moniker of “the underwater nature trail.” Its rocky reefs are home to Blue groupers, stingrays, sea urchins and Spotted Wobbegong sharks to name a few, and as if that weren’t enough the water itself is a pristine turquoise hue, creating a picture-perfect scene from the cliffs above. 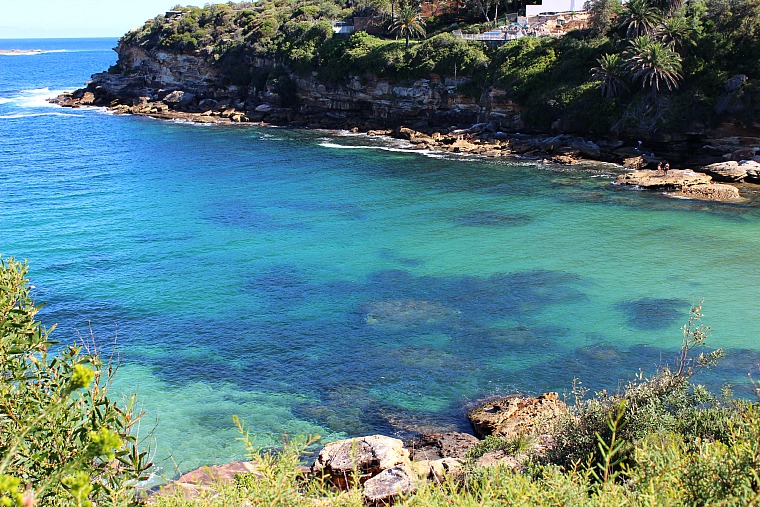 Finally, the last stop on the Bondi Beach walk is Coogee Beach, a welcome sight for those who have been trekking under the searing Sydney sun. Coogee is a vast, white sand beach surrounded by huge homes perched precariously on the surrounding cliffs. 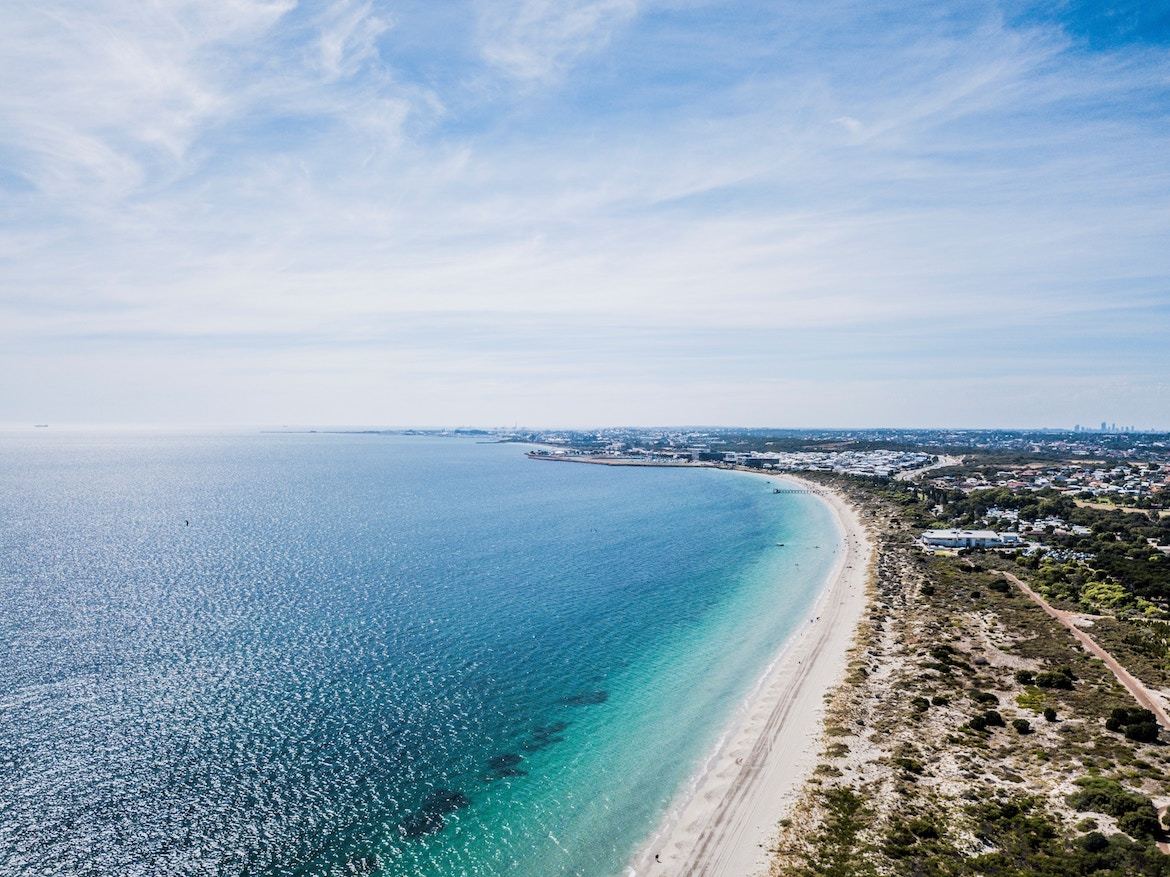 About 14-thousand people live in the area, drawn to the nearby ocean baths, parks, green spaces and playground. All that, combined with serene, beautiful views of the coastline, makes Coogee one of the best Sydney beaches and the perfect place to relax after finishing the incredible Coastal Walk. 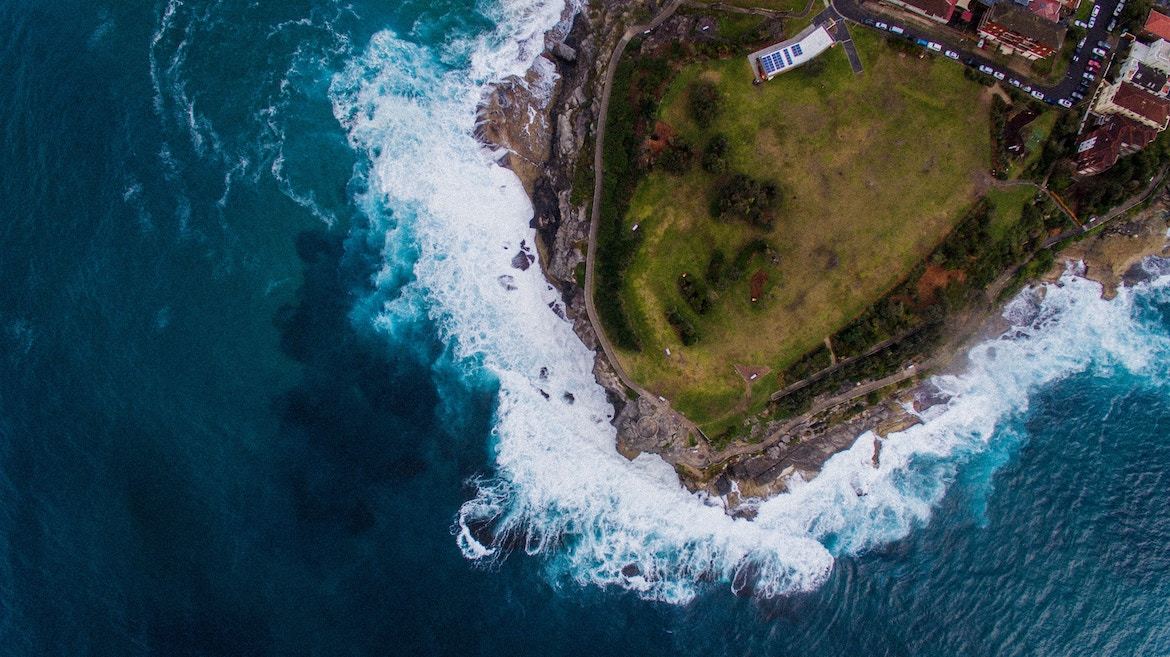 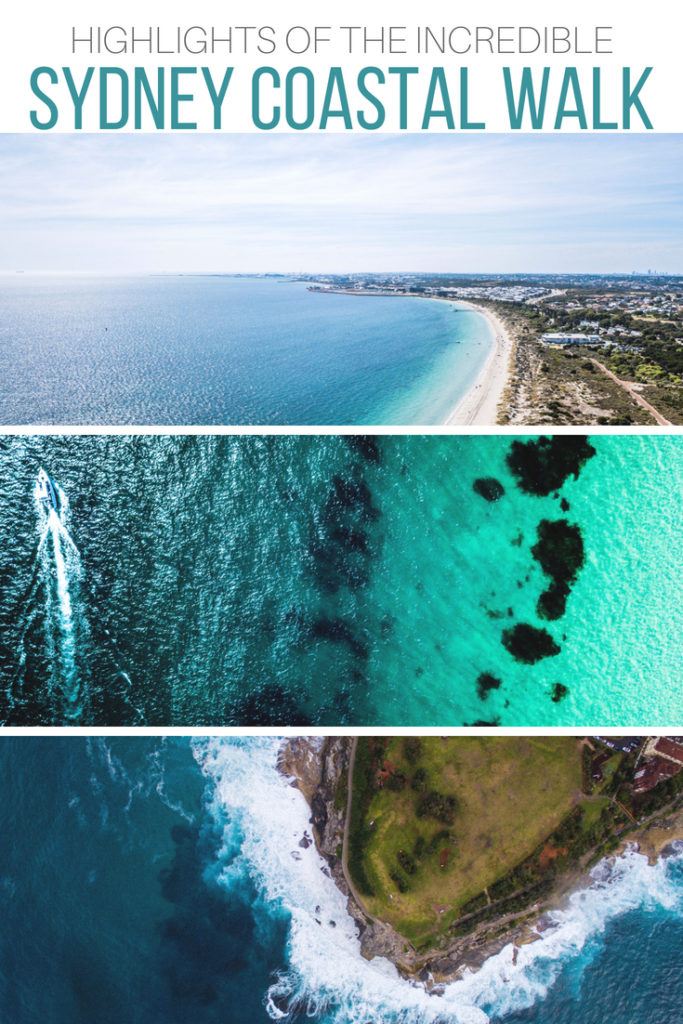 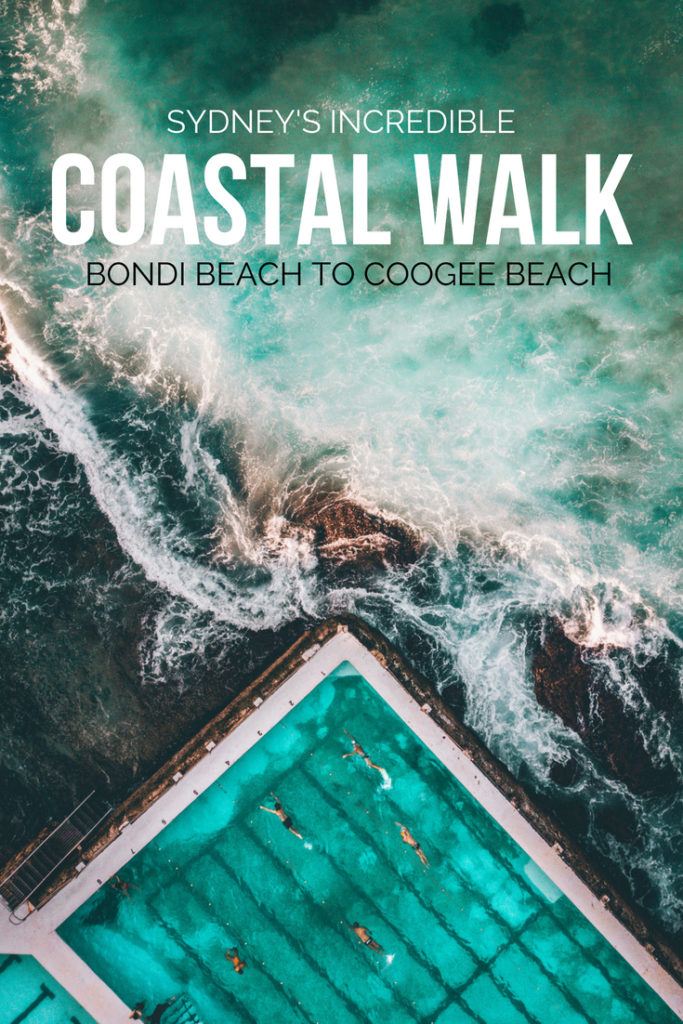 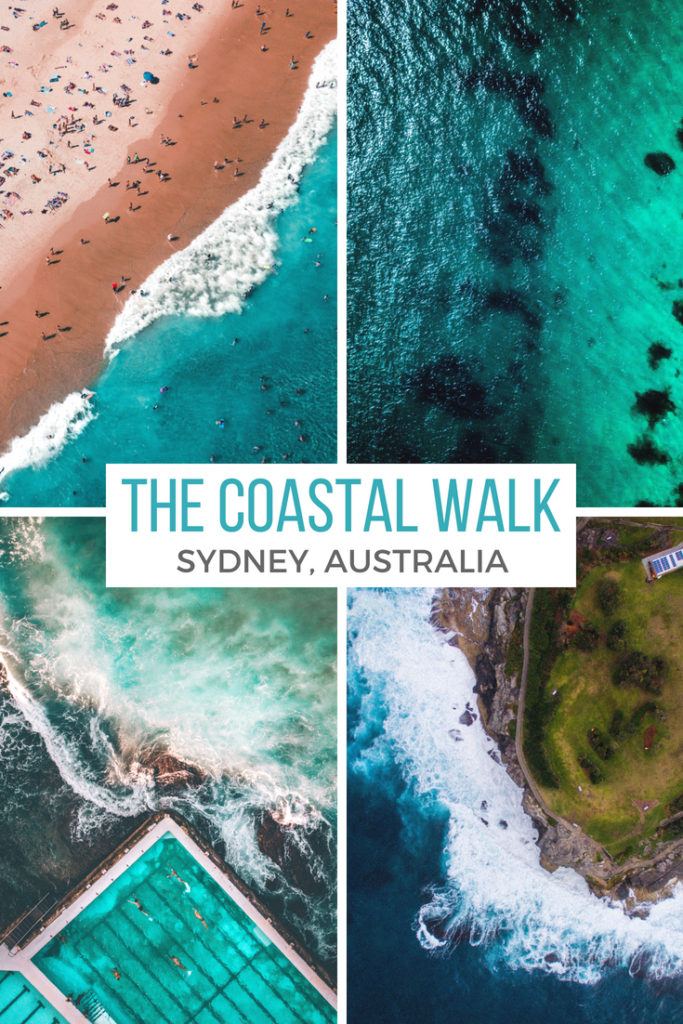