A guide to West Edmonton Mall

Growing up in Calgary, Alberta, I can be a bit judgmental when it comes to the province’s capital city. I blame it on the Battle of Alberta. Despite Edmonton being browner and colder than Calgary (in my opinion) it does beat us in one category—shopping. Yes, Edmonton is home to West Edmonton Mall, a 48-block-long juggernaut housing a hotel, casino, aquarium, skating rink, mini-golf and an amusement park among other things. Basically, it’s every kid’s dream come true, and one of the best things to do in Edmonton.

The Fantasyland Hotel. Courtesy of WEM.

To make a real weekend of it, get a theme room at the Fantasyland Hotel. Choose from ones like Western, Arabian nights, Polynesian, African, Igloo or the Hollywood Nights room, which features a stripper pole in one corner. Yes, a stripper pole. Reservations start at $198 per night. Now that you have a base, meander down to the mall for a meal at one of the many restaurants, or have a drink at one of the lounge’s or nightclubs. If that’s not your style, get ready to shop.

WEM has a staggering 800 stores, which is more than enough to occupy the 30 million people who visit every single year. You can find just about anything here, whether you need a wedding dress, a puppy or a flat-screen TV. There are only two floors which means you will be walking a lot, so be sure to wear comfy shoes.

My favourite way to spend the day at the mall is to head to the World Waterpark, which boasts the world’s largest indoor wave pool. There are 17 waterslides including the Cyclone, which sees thrill-seekers stand on a platform that drops open, releasing them 17 meters straight down.

Most people then get shot through a loop which eventually deposits them back into the water—but I’m not most people. The one time I got peer-pressured into getting into the Cyclone, I didn’t get enough momentum to make it through the loop and ended up getting stuck halfway through the waterslide. Fortunately they have an escape hatch for such events, though my pride ended up a little bruised. If waterslides are a bit much for you, you can rent a cabana and spend the day lounging, or relax in one of the hot tubs.

RELATED: 5 of the best outdoor activities to enjoy in Edmonton in summer 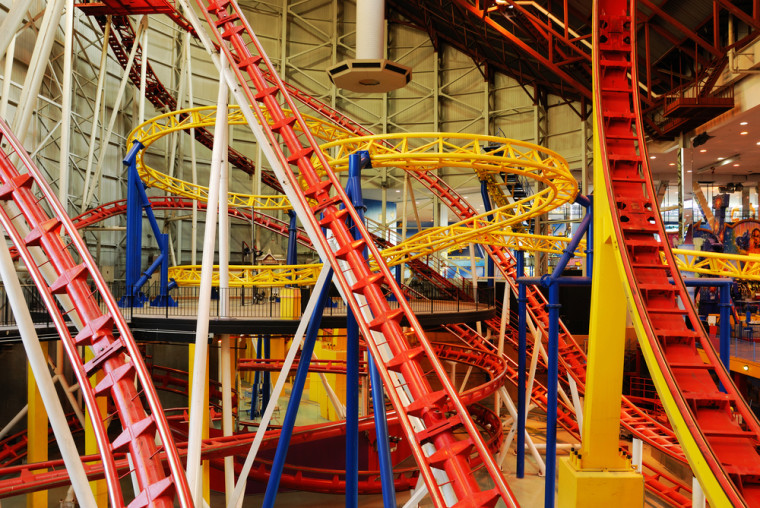 Galaxyland is also a record holder. The world’s largest indoor amusement park features more than 20 rides for people of all ages, including a roller coaster. General passes will set you back $33, while kids cost $27. The good news is Family Passes can save you some cash, and WEM frequently offers deals for people also staying at the hotel. Individual ride tickets are also available, in case you can’t handle more than one spin around before losing your lunch.

While it can make for a pricey weekend, keep an eye out for coupons or discounts, or try to win your money back in the casino! Regardless, it’s sure to be a fun few days.