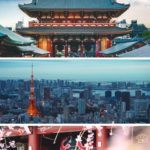 Tokyo is one of the most interesting cities on earth, and a textbook case in contrasts where glittering skyscrapers and flashing neon lights blend seamlessly with serene zen gardens and ancient shrines. 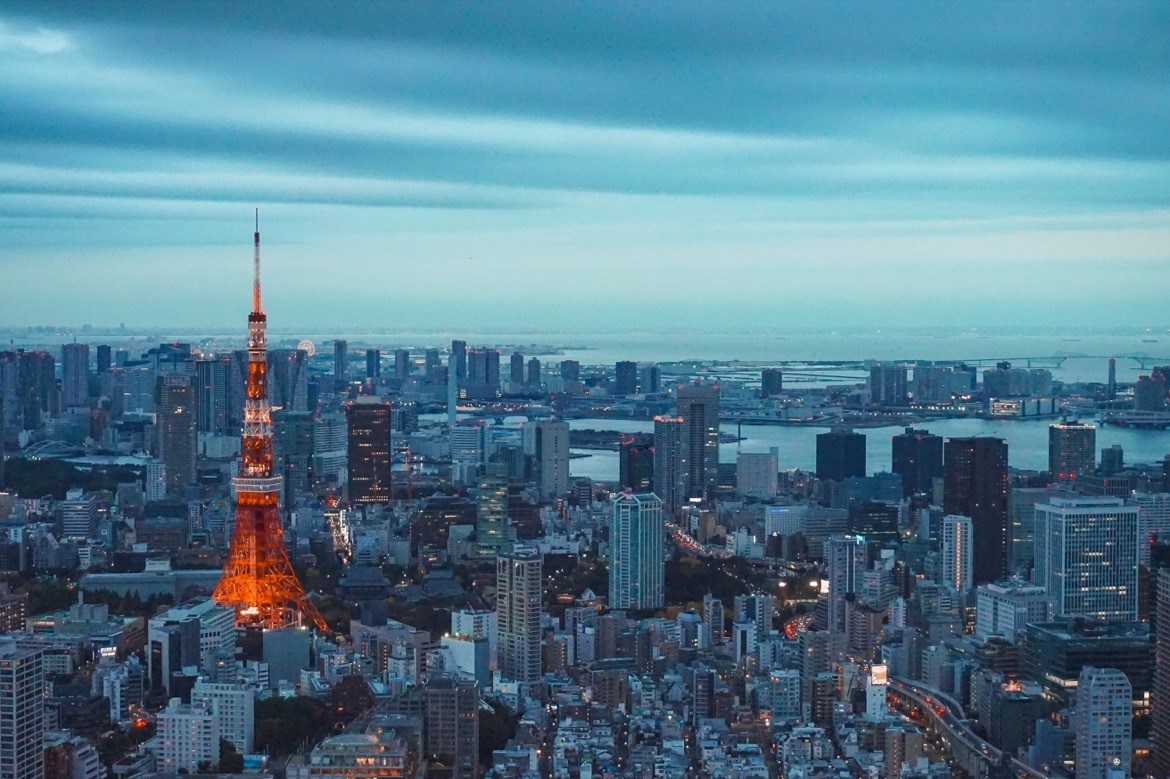 Home to more than nine million people (13 million if you count the surrounding suburbs), the Japanese capital is a sprawling, hectic metropolis full of lightning-fast trains, memorable fashion choices, temples, geishas, the world’s best toilets (yes, really) and sushi. Oh so much sushi.

Here are 10 Tokyo travel tips and fascinating facts to know before you go.

1) It seamlessly blends old with new

Tokyo is one of those cities that really has it all. Being so modern, it has all the high-end, luxury stores and glitzy hotels that well-heeled travellers demand, as well as some of the most advanced technology around. At the same time, visitors can enjoy the peaceful, bright green parks, centuries-old temples of Asakusa and a glimpse of the iconic Imperial Palace or Tokyo Tower. Secretive Geishas walk side-by-side with giggling teens outfitted in Hello Kitty shirts and high-tops, and somehow, it all works.

That’s why Tokyo is truly a place that has something for everyone, whether you’re enjoying a quick city break or have plenty of time to spare. 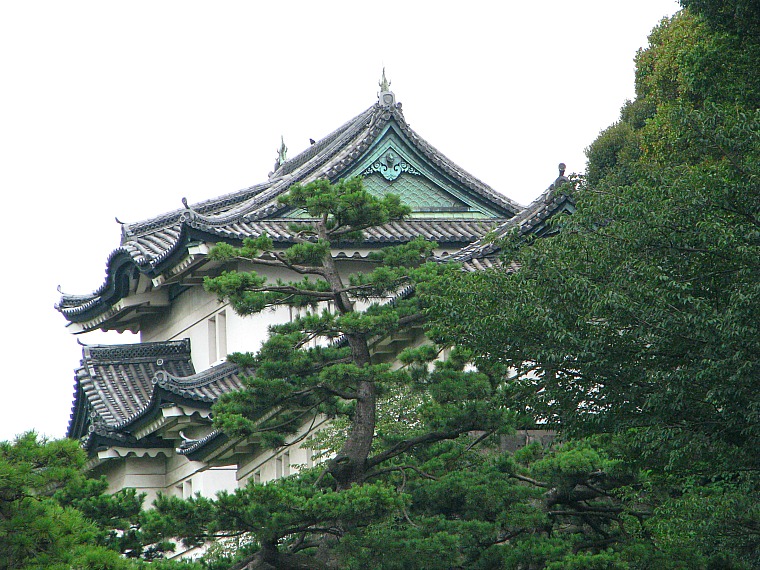 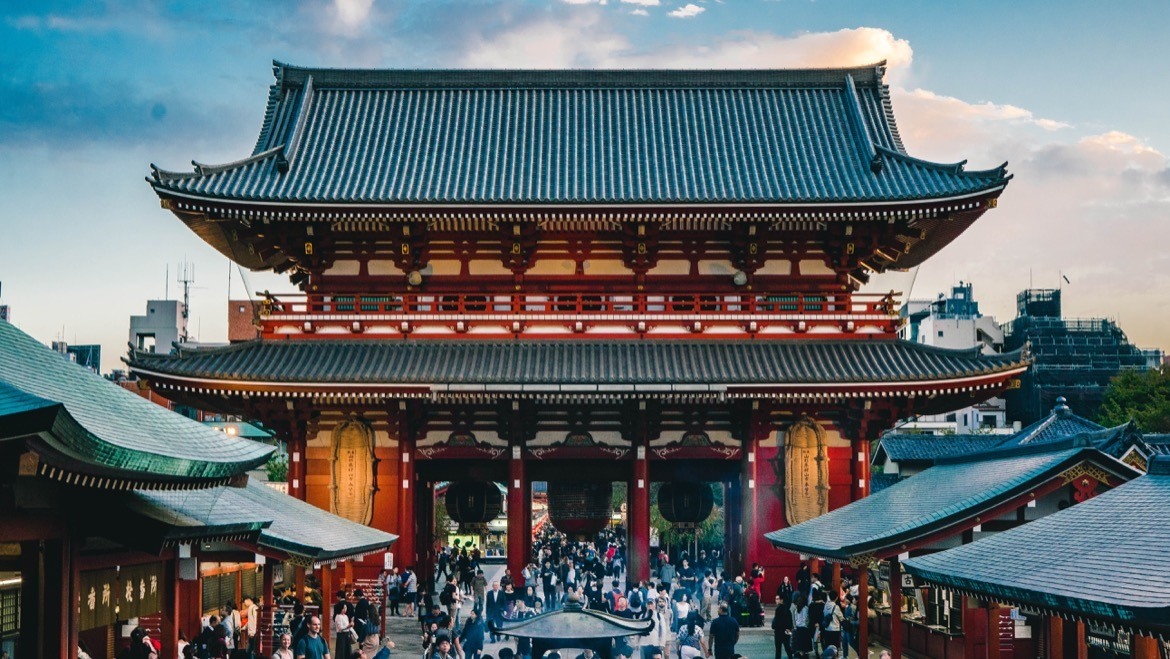 2) It will give you sensory overload

A Tokyo vacation is rarely relaxing, unless you plan to sit in the Imperial Palace gardens the entire time. Frankly, the entire city is sensory overload—but that’s what you came here for, right?

Bright, flashing neon signs, speeding trains and the hustle and bustle of millions of people getting from point A to point B are just an average day around here. And if you do need a break, whatever you do DON’T head anywhere near the Shibuya district. Even a quiet restaurant is still not safe from the buzz of non-stop activity from the streets below, which you simply can’t look away from.

A safer bet to seek refuge in Asakusa, where the sacred temples is one of the best places in Tokyo to find some peace and quiet. 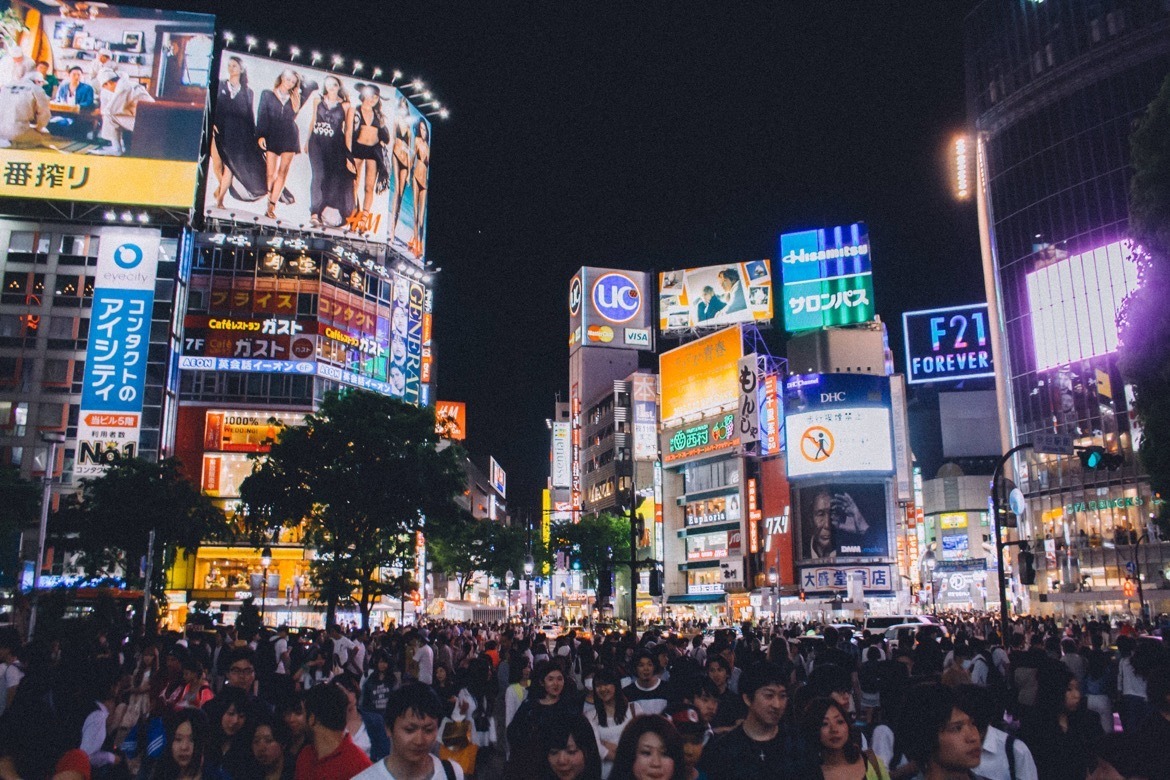 3) They have the best toilets

Japan has the best toilets in the world. There, I said it (and no, this is not something I normally have a habit of profiling!). The Japanese have transformed the porcelain goddess into a machine that features the likes of seat warmers, music, water sprayers and deodorizers, just to name a few. Be prepared for this the first time you head into a stall, as you’ll likely spend twice as much time in there than usual simply trying to figure out what each of the buttons do!

While it probably sounds like the designers went a bit overboard, I personally think Japanese toilets should be the gold standard around the world, and it’s an epic fail they aren’t widely available anywhere else. 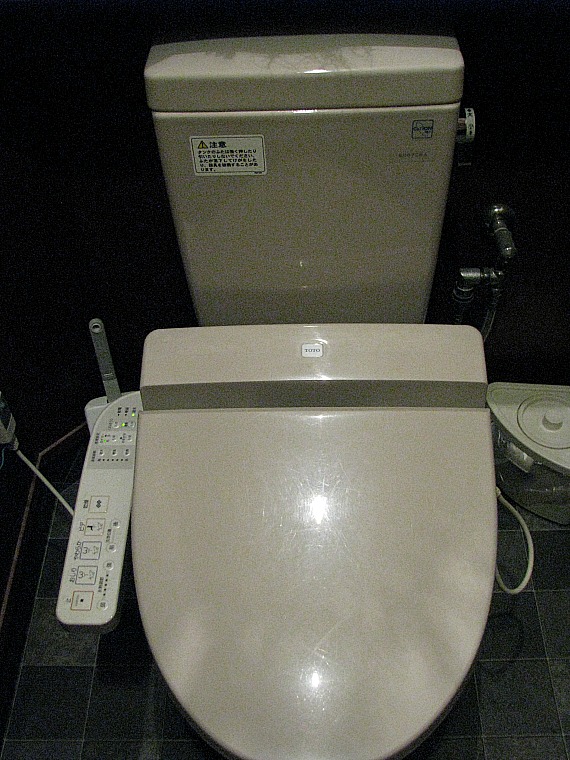 Most major cities are pricey, and sadly Tokyo is no exception. If you’re a backpacker on a tight budget, you’d be wise to avoid visiting until you can afford to splurge. A standard hotel room starts at around $120/night and goes WAY up from there—and when I say standard, it’s not exactly North American standard. Nope, expect to be able to touch all four walls at the same time, and trip over your suitcase as you try and make it into the tiny washroom.

Cabs and bullet trains will also set you back a pretty penny, but the good news is the subway system in Tokyo is rather affordable. Hopefully budget concerns won’t deter you from travelling in Tokyo, since tricks like making your own food whenever possible or staying in budget accommodation can help cut back expenses. 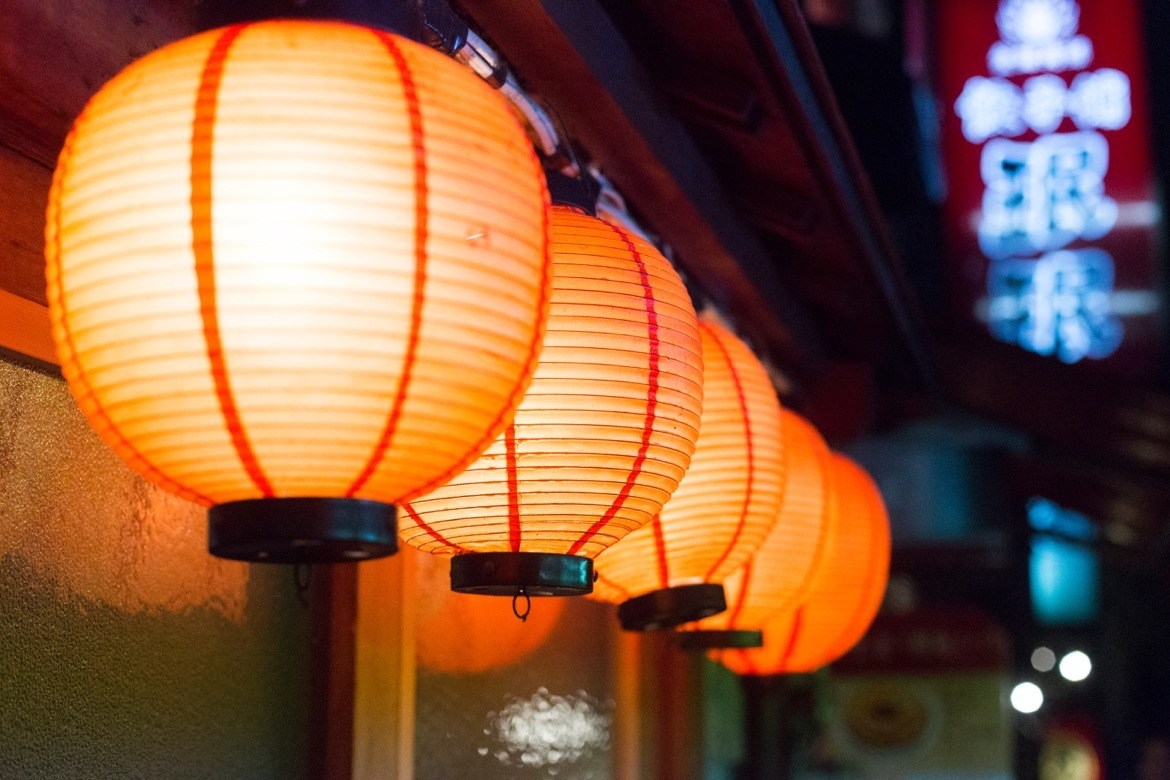 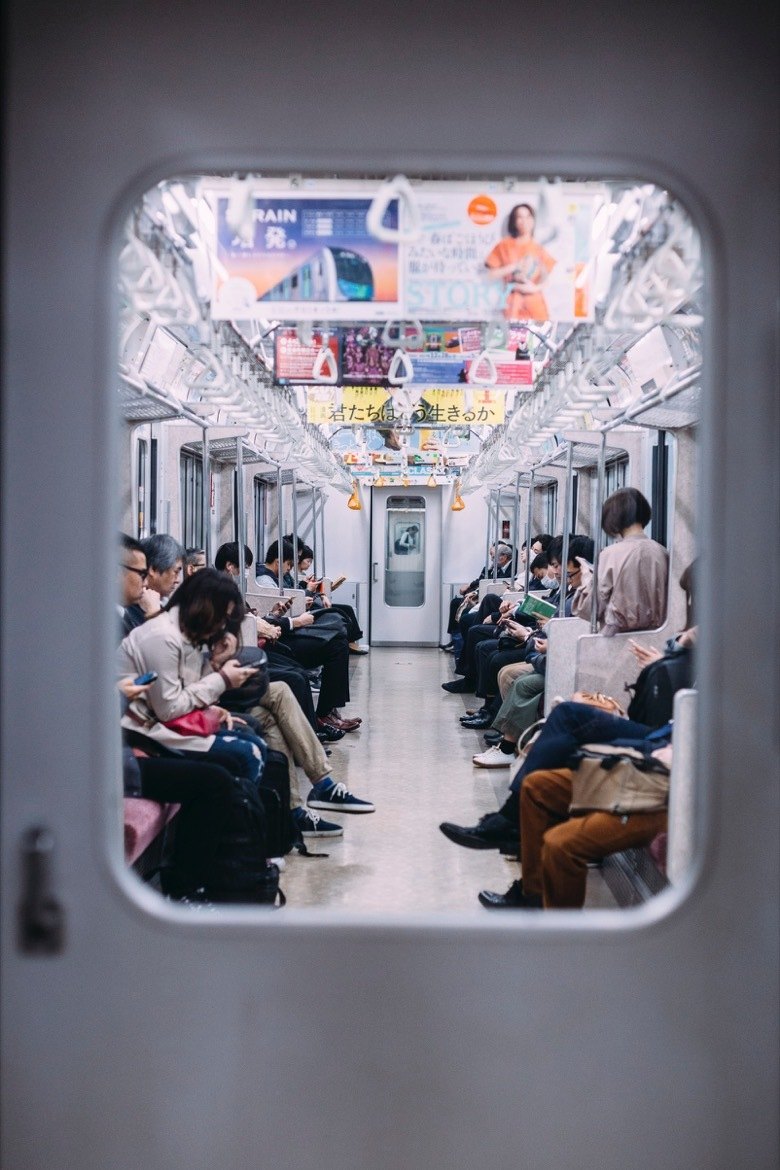 Take the subway in Tokyo to save money

5) Tokyo is home to the world’s busiest intersection

There is one word to perfectly sum up Hachiko Square: insane. Located in the bustling Shibuya district, it was made famous for being home to the Hachiko sculpture, which depicts a loyal dog.

The story goes that the pet met his owner every night at that spot, and continued to come even after his master died. The story of loyalty so moved the Japanese that they erected a statue in his honour. Anyway, the second reason Hachiko Square is famous is because it can accommodate thousands of pedestrians that cross the intersection AT THE SAME TIME, making it one of the most popular places to visit in Tokyo. It is incredibly hectic as you can imagine, and you could basically end up crowd-surfing if you don’t keep your feet moving fast enough.

This is THE place for people watching—if you don’t give yourself a headache first. Here’s a great list of some of the other unusual things to see and do in Tokyo. 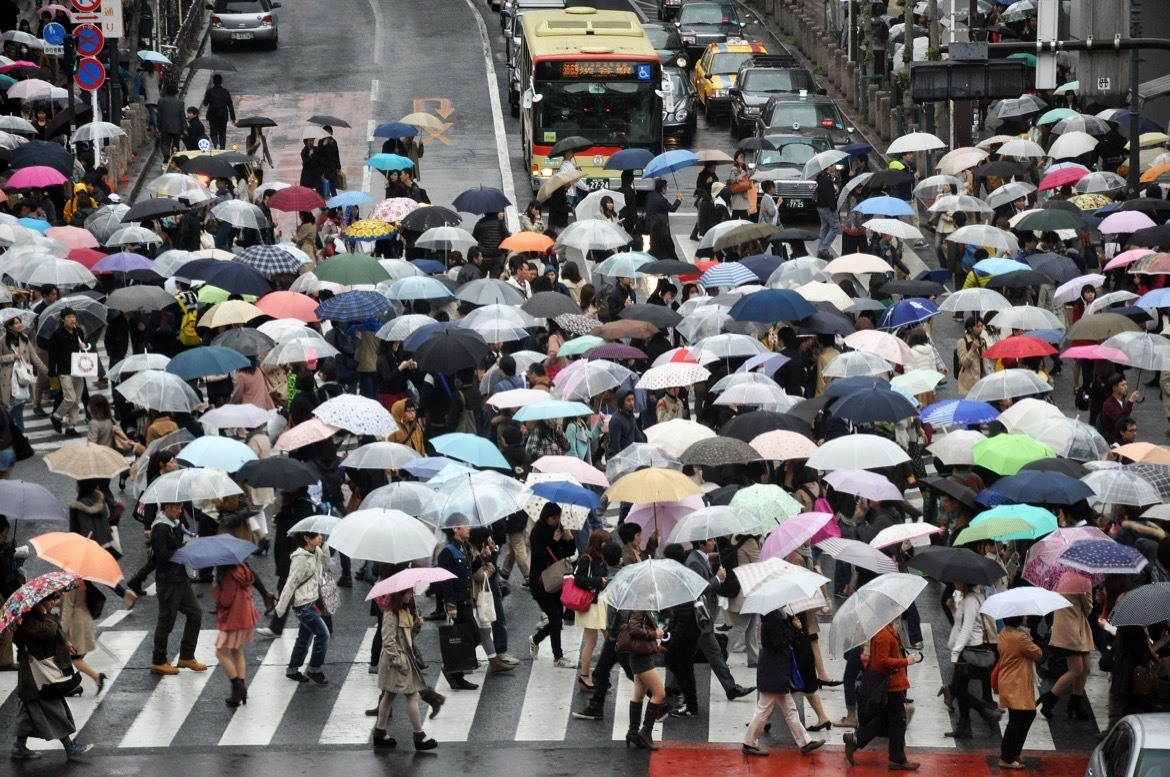 6) People still eat on the floor

I’ll admit it, I’m a sucker for tourist traps. If there’s something that you’re supposed to experience at least once in a new place I’m all for it, which is why I basically refused to sit in a chair during my entire trip to Japan.

I was pleasantly surprised to find that while most people in Tokyo now sit in chairs and booths at restaurants, you can still find places where you can station yourself on a tatami mat while you gobbling down your sushi. If you head to Tokyo, try to do this at least once–unless you’re 6’3” tall and can’t cross your legs, in which case you might find the whole experience a tad uncomfortable. 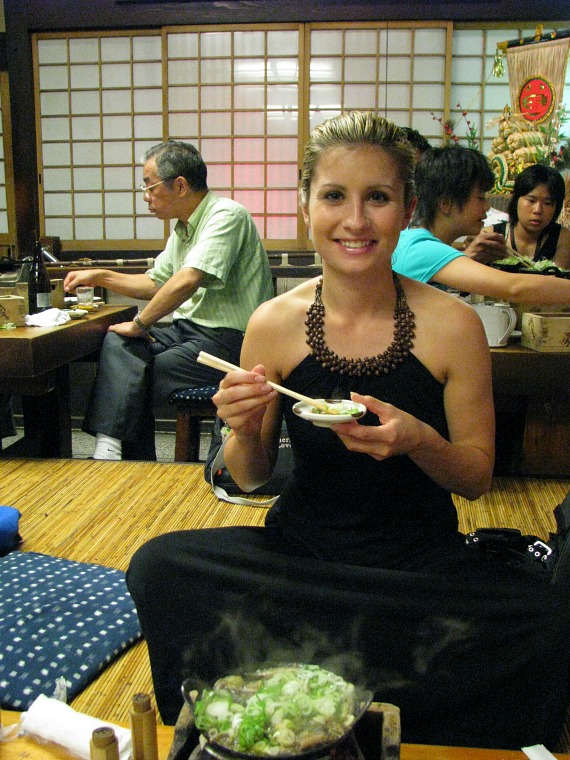 7) You can buy pretty much anything from a vending machine

The Japanese love their technology, and thanks to the crazy popular vending machines all around Tokyo there’s barely a need for stores. Now we’re not just talking boring stuff like food here (although you can order entire meals from a restaurant at the vending machine located at the entrance before seating yourself). No, you can get just about anything; umbrellas, clothes, eggs, even beer and champagne (which is super handy, BTW!). 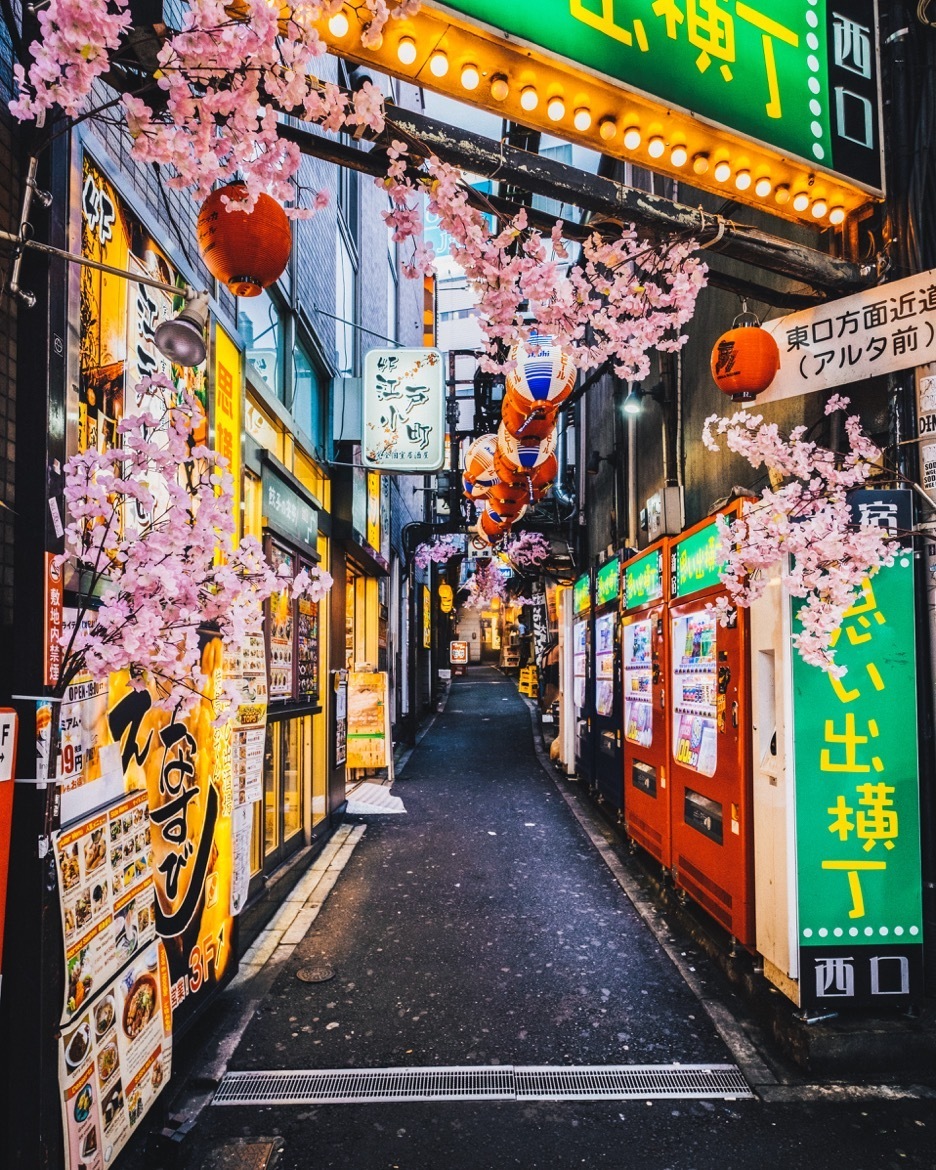 8) The fashion is insane

So…trying to go shopping in Tokyo is a bad idea. Let’s just say, the fashion in Japan doesn’t quite translate over to the streets of North America.

Basically, it seems that the trick here is to grab anything you like and layer it on top of each other, regardless of colour or pattern. Anime is huge too, so cartoon logos abound. Knee socks, vests, little bright pink skirts, skulls…really, anything goes. The city is also famous for ‘Harajuku,’ a district in Shibuya where teens dress in all sorts of mismatched outfits, which was made famous by singer Gwen Stefani.

Then on the other side of the spectrum, you can see women wearing traditional Geisha outfits, which is a real treat if you manage to spot one of them. You’ll usually see Geishas near the temples in Asakusa.

If there’s one thing the Japanese people like it’s cameras, so people are usually happy to pose for a picture if you want to snap a selfie! 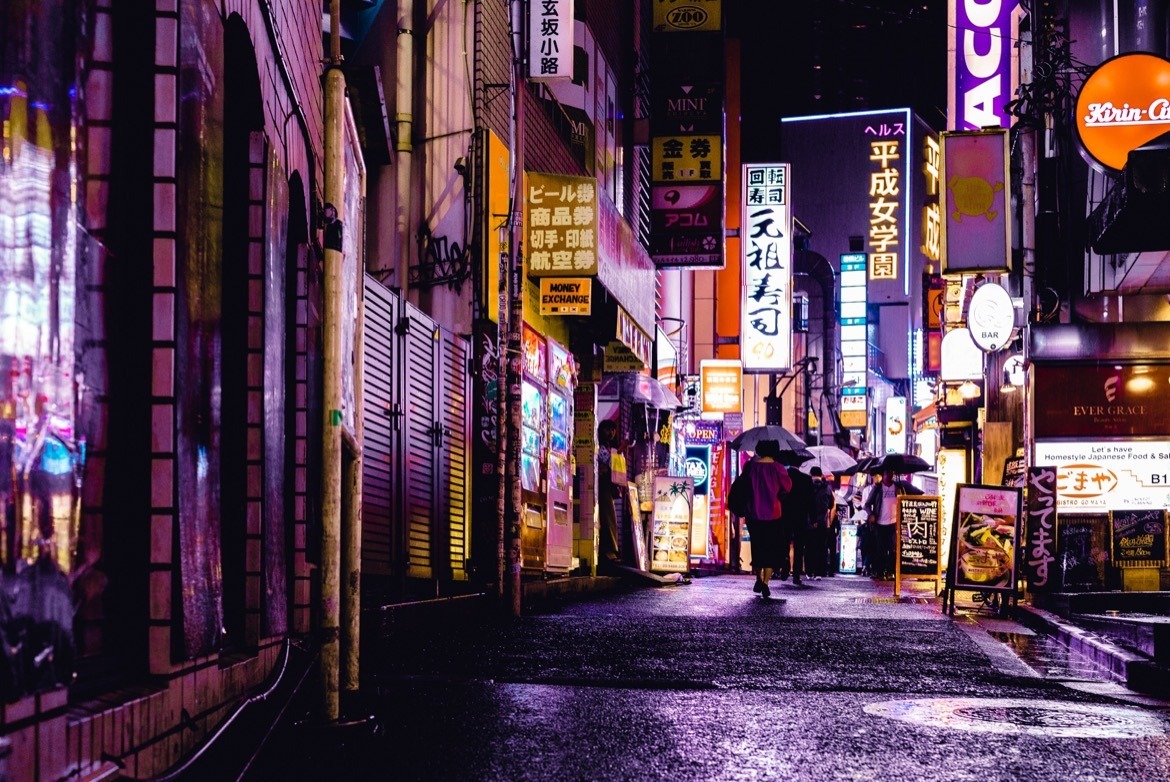 By far one of the most bizarre trends I noticed during my time in Tokyo was what happens on the train. People in Japan work extremely long hours, and then have a long commute on the subway to get home. So, they save time by doing their sleeping on the train. Seriously.

I don’t know how they manage to get a good rest while sitting side-by-side, or know when their stop is coming up, but somehow they have it all figured out. Get ready for some quiet, relaxing rides if you ever hop on… 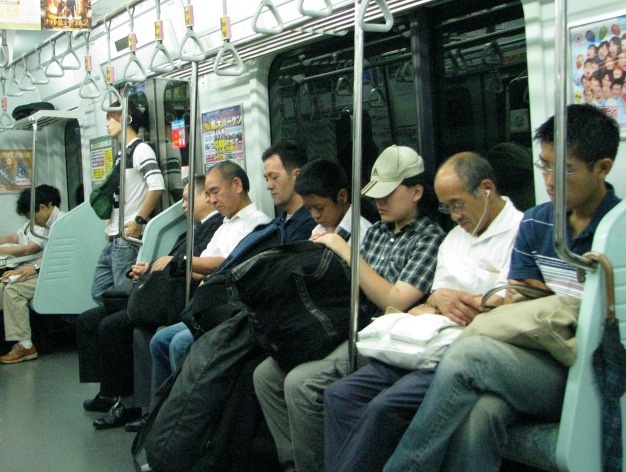 10) Everyone is incredibly nice

Us Canadians are famous for being polite and saying ‘sorry’ rather excessively, so I was rather shocked when I arrived in Japan and realized that they basically put us Canucks to shame. When the train pulls into the station, the people patiently wait until everyone is off before getting on (what a concept!), the entire staff greets you with a happy chorus of ‘Irasshaimase’ (welcome) when you enter a restaurant, and they go above and beyond to help tourists even when it’s obviously super inconvenient.

In my experience, the Japanese are the nicest people on earth, and that alone can make any trip to Tokyo a great one. 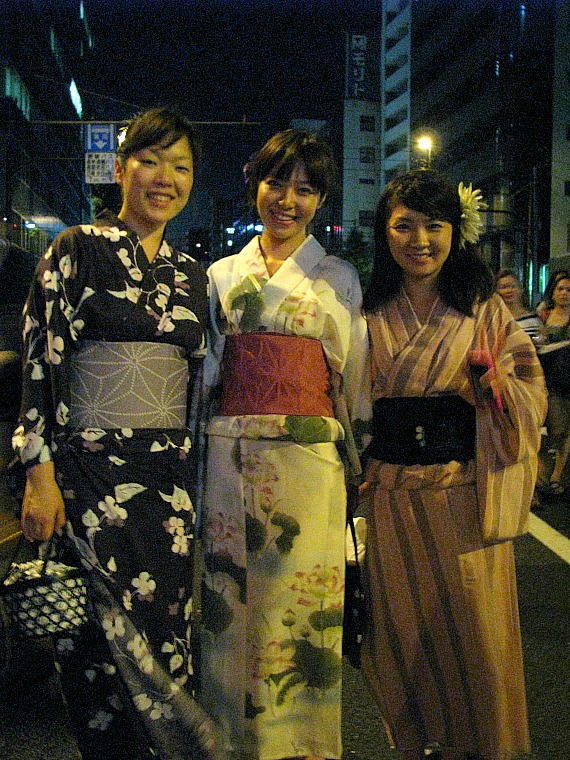 Must try: Anything flavoured with green tea. Try a green tea ice cream cone, and be sure to pick up Green Tea Kit Kat’s at the airport to bring back home!

How to get there: Most visitors arrive by plane, and touch down at Narita Airport. FYI, this is far away from Tokyo. You’ll have to hop on the JR Narita Express Line train and travel about one hour to get to the city centre. Tickets cost anywhere from 2900-5700 yen depending on class and destination. Alternatively, you can buy a 3,000 yen ticket for the limousine bus, which takes about two hours and stops at hotels and stations throughout the city. 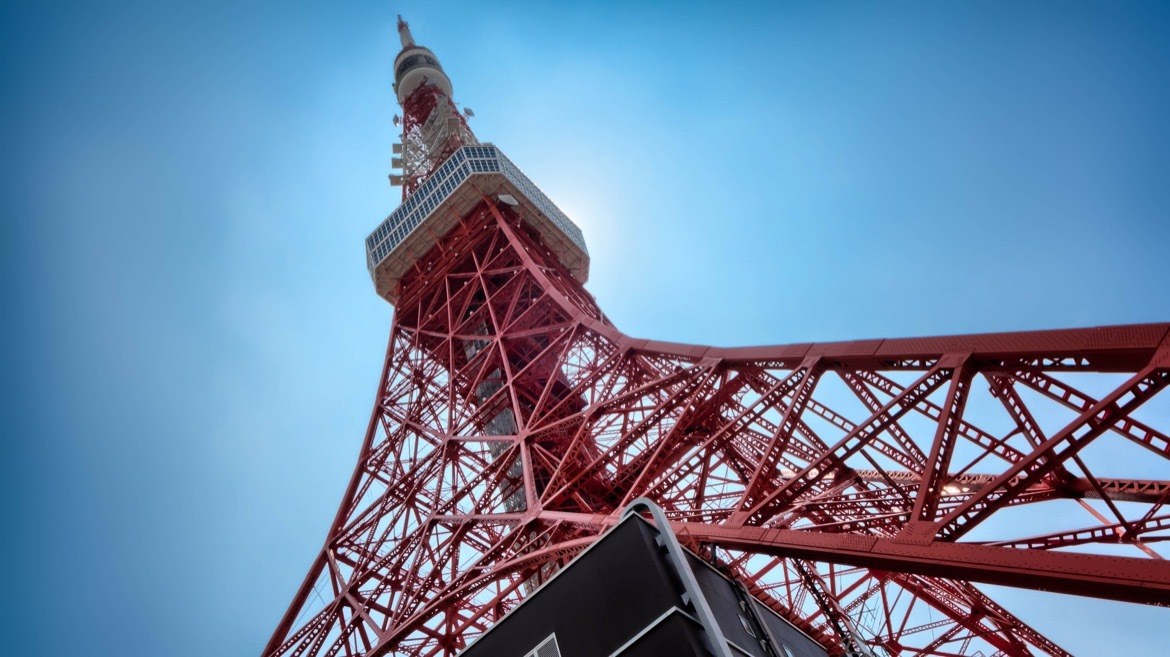 The 333 metre Tokyo Tower was built in 1958 and the design is based on the Eiffel Tower.

Places to stay in Tokyo

There are a number of districts throughout Tokyo which are excellent to base yourself in, depending on which sites you see. Asakusa is a great choice as it is quieter and near the temples, while Ginza is where you’ll want to be if you like to shop. Roppongi is famous with foreigners as it’s home to many embassies and considered the entertainment district, and Ueno is the best spot for seeing those famous cherry blossoms. 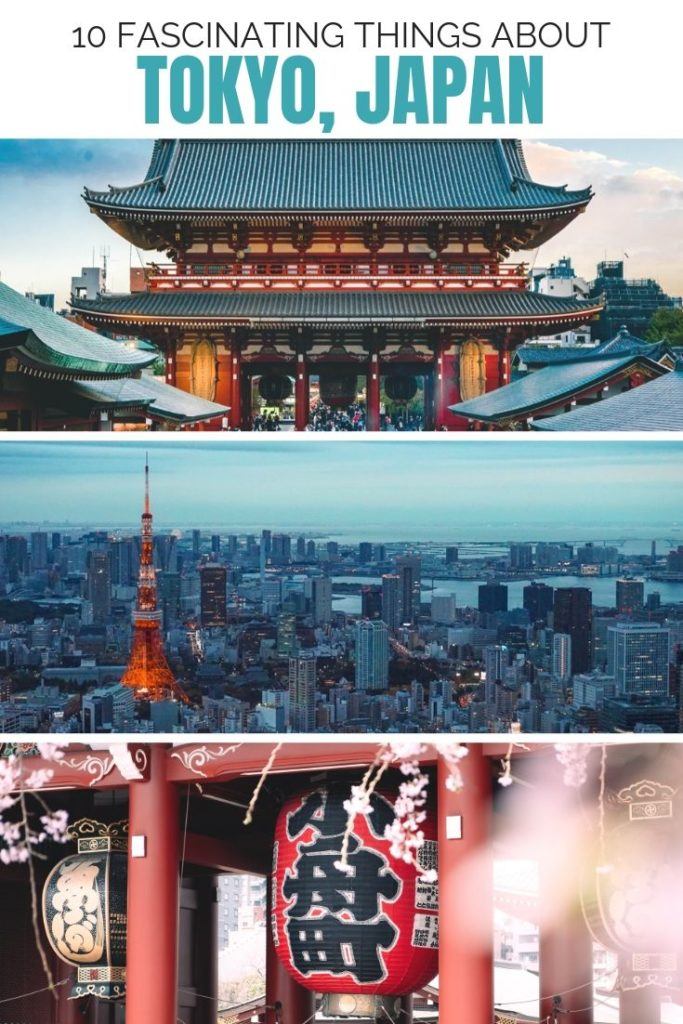 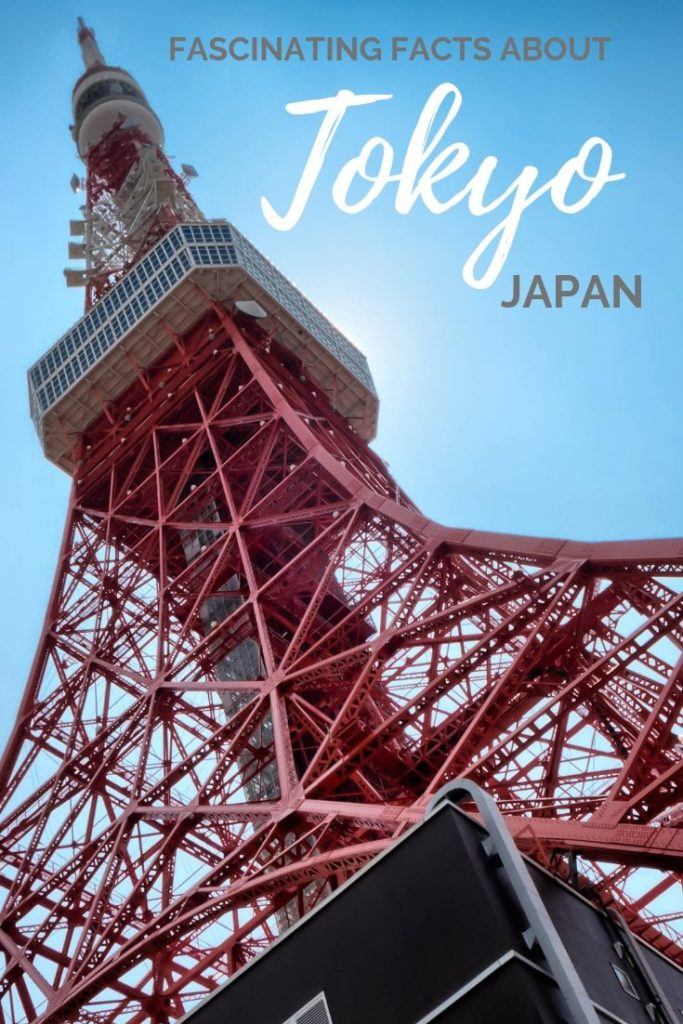 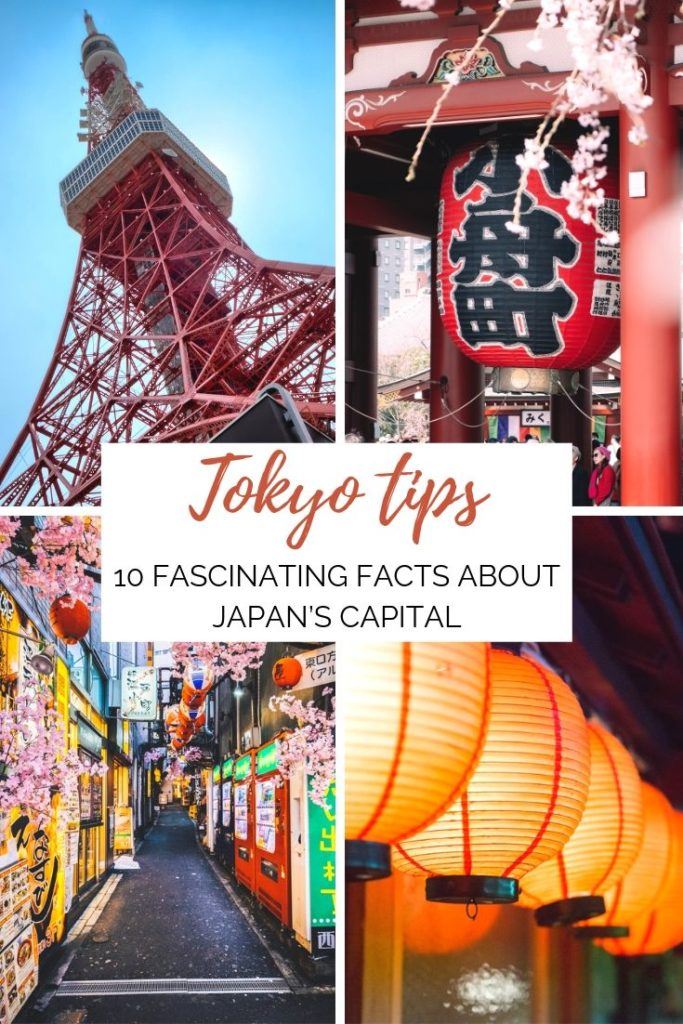