There are few cities in the world that can rival stunning Paris. Not only does it boast a storied history, beautiful landmarks and world-famous architecture, but it’s also the gateway to Europe and is a fantastic hub to start your vacation in. You could easily spend a week in the city lazing around in an outdoor café, taking in the stunning views from the top of the Eiffel Tower, or poring over priceless works of art in one of the many museums. There are also a number of easy day trips from Paris, including tours of Champagne, visiting the Palace of Versailles, or taking the kids to Disneyland Paris.

However, if you’re tight for time you can easily see the city’s highlights in a day or two, especially if you hop on a double-decker bus tour. There are dozens of operators in the city, and you can expect to pay about €25 for a day pass that will take you directly to each major landmark, and you’re free to jump on and off as you please. The sites are quite spread out, so this is an easy way to avoid navigating the subway and becoming exhausted.

If you insist on travelling like a local, you might want to spring for a Paris Visite card, which allows for unlimited travel on the metro, bus or RER. One day passes cost about $36, while a five-day will set adults back $92. Once you’ve sorted out how you’re getting around, it’s off to the races.

It goes without saying that this is THE highlight of a trip to Paris. That first moment you see the iconic tower is likely one of those moments you’ll remember forever, and the grand sight does not disappoint.

There are a number of ways to enjoy the view of the iconic tower, whether you simply view it from afar, take it in from the water (more on that later) or brave the queue and head to the top!

The tower is open every single day, and visitors can take part in guided tours or head inside on their own. An elevator ticket to the second floor costs adults €8.50, or €14.50 to get to the top. You could also hike up the stairs to the second floor, which costs €5, and tickets are available on site or online. Keep in mind there can be VERY long lines to get inside, especially during the busy season, so plan accordingly.

If you can, try and take in the view at night as well, when the tower is all lit up with a golden glow—it doesn’t get much more romantic than that!

The poor, little Louvre. This world-class museum boasts rooms and rooms full of some of the most priceless works of art on earth—yet most people just head there to see THAT painting. You know the one I’m talking about. Yes, Mona Lisa.

OK, so obviously this is one of those things you should really try and do regardless of whether or not you’re interested in things like masterpieces, so here’s the deal. The Louvre is a stunning compound that hosts about 400,000 pieces from around the world, including paintings, sculptures, antiquities and drawings. The museum itself is a work of art, as it’s enclosed in a rectangular palace which surrounds the entire grounds, guarding a stunning glass pyramid and fountains that sit in the centre of it all.

While you could spend literally weeks inside the Louvre and still not see everything, most visitors head there for only a few hours to take in some of the more famous works. First up for most is Mona Lisa, aka La Gioconda, and it’s easy to track down if you just follow the huge crowd surging towards it. You’ll finally make it into the big room, head towards the hundreds of people gawking in a semi-circle around it and then…realize how darn small and anti-climactic it is. Don’t say I didn’t warn you. To get there, take elevator C to the first floor, head to the Grande Galerie, and turn right after you reach the statue of Diana the Huntress.

If you want to get your money’s worth, however, stick around to take in more of the sights, and zone in on areas that interest you like Egyptian antiquities or Greek sculptures. Another popular pick is the Aphrodite, or Venus de Milo, which was discovered on a Greek island back in the 1800s. She may not have any arms, but Aphrodite is still a beautiful sight. To find her, take an elevator down to the ground floor where the Greek Antiquities are located. She’s on your left when you enter Room 7.

The Louvre is open every day except Tuesday from 9 a.m. to 6 p.m., and is open until 9:45 p.m. on Wednesdays and Fridays. It’s closed on select holidays. Admission to the permanent collections is €12 for adults, but there is free admission on the first Sunday of each month as well as July 14.

If you are a fan of incredible architecture, prepare to be blown away. This is by far The. Most. Stunning. Church. Ever.

First off, it’s huge. The Gothic stylings highlight two massive towers guarding the front entrance, while a picturesque façade faces the Siene River. The church is more than 400 feet long and over 200 feet tall—making it tough to squeeze the whole thing into your camera’s viewfinder! 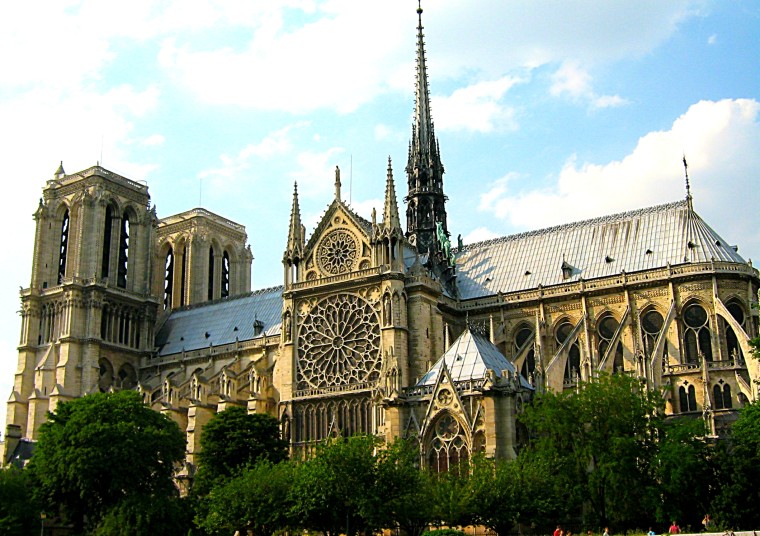 There is a large, empty space in front of the cathedral which is usually teeming with tourists clamoring for a picture. Luckily, everyone is allowed inside free of charge, and there is almost never a line up. You can wander down the aisle, make time for some reflection in the pews, light a candle in memory of a loved one—or head up to the south tower. Like pretty much all towers in Europe, there are no elevators so you get to hike up 387 steps for the view. Keep in mind the tower entrance is outside the cathedral, on the left side of the façade.

A trip down the Seine River is a must if you’re visiting Paris, as it’s a fantastic way to get a different perspective of the city.

The winding river is nearly 800 kilometers long, stretching from northern France, through Paris, all the way to the English Channel. It passes by some incredible sites in the city including the Eiffel Tower and Notre Dame Cathedral, so not only is it a nice way to unwind but you’ll also come away with some great photos. Another bonus is that you’ll get an up-close look at dozens of the beautiful gothic bridges that cross the water.

There are a number of tours you can book that will shuttle you down the river, and you can also pair your excursion with dinner or perhaps a champagne toast. A night cruise is a romantic option, and some include a show. If you’re watching the budget, some of the hop on and off bus tours also include a boat ride in their ticket price.

The Arc de Triomphe is arguably one of the more famous landmarks in Paris after the Eiffel Tower, and its grandiose also does not disappoint. The massive arch is actually a monument ordered by Napoleon (yeah, that guy) in honour of those who fought for France, and stands nearly 50 metres tall and 45 metres wide. Here’s the kicker though: it can be kind of hard to get a good look at it.

The Arc is surrounded by multiple lanes of traffic, and chances are you’ll see it from the top of a double-decker tour bus instead of up close. That being said, visitors are welcome to get there on foot and hike up to the top to take in the view, which will set you back €8. Of course, you have to get there first…so DON’T RUN ACROSS TRAFFIC FOR THE LOVE OF GOD. There is an underground tunnel that you can access near the Wagram exit of the metro station—I highly suggest this route. 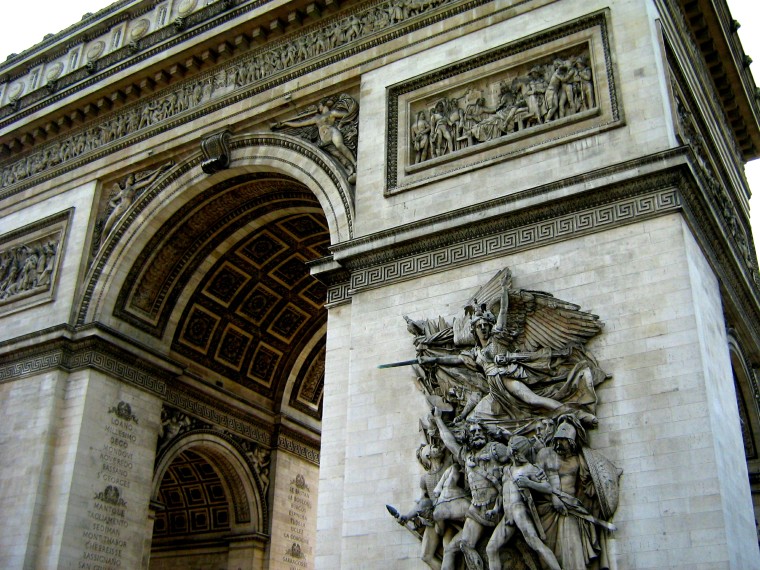 Once you’ve got your fill of history there, clamour back down and do as the Parisians would—shop! The Champs-Elysees is one of the most expensive strips of real estate in the entire world, and the stores have price tags to match. The strip features high-end fashion houses, beauty bars, restaurants, movie theatres, jewelry stores and hotels.

In other words, you can’t really get bored here.

Montmartre and the Basilica of Sacré-Coeur

Montmartre has to be one of my favourite districts in the whole city. Why? It’s one of the best neighbourhoods in Paris to stay in as it offers a number of lodging options, quaint outdoor cafes, easy subway access and has a nice neighbourhood feel. If you’ve ever been to San Francisco, you’ll already be familiar with the super-steep side streets Montmartre is famous for—but hey, the walk will help you work off all that famous French cuisine!

The most famous landmark in the area is the stunning Basilica of Sacré-Coeur, a brilliant, bright-white church that’s perched high on a hill overlooking the entire city. It features three massive domes, one of which visitors are welcome to check out—as long as they can handle the 300 step climb (again, no elevators!). The Basilica is open daily from 6 a.m. to 10:30 p.m. and entrance is free.

Fortunately you don’t need to head inside to enjoy the scenery, and the site is a fantastic place to stop for a picnic lunch. Sure there are throngs of other tourists enjoying the view, but when I went it was a beautiful, sunny day and there was an old man wearing a beret playing the violin with a huge grin on his face. Does it get any more Parisian than that? 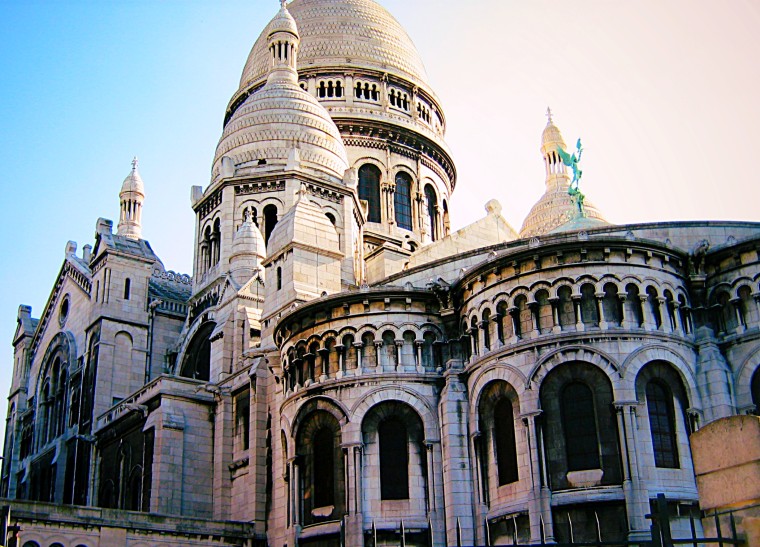 Where to stay: A trip to Paris doesn’t have to break the bank- check out these great hostels, starting as low as $20 per night.

How to get there: There are a crazy amount of flights into Paris’ main airport, Charles de Gaulle (CDG), and the Charles de Gaulle train station is also handy, as many international trains will take you straight into the airport so you can catch your flight home. There is also a smaller airport called Orly which is about 13 kilometers south of the city, which also has international flights. Paris is easily accessible by car or train, with the main station being Gare du Nord. It’s home to Eurostar, TGV and Thalys trains, and can easily get you to Belgium, the Netherlands, Germany and the UK.

Must try: Grab a fresh baguette, fromage (cheese, obviously) and a bottle of wine from a market, then spend a sunny afternoon having a picnic in the park. Talk about the quintessential French experience!

Canoeing to a castle: An epic visit to France’s Château de Chenonceau 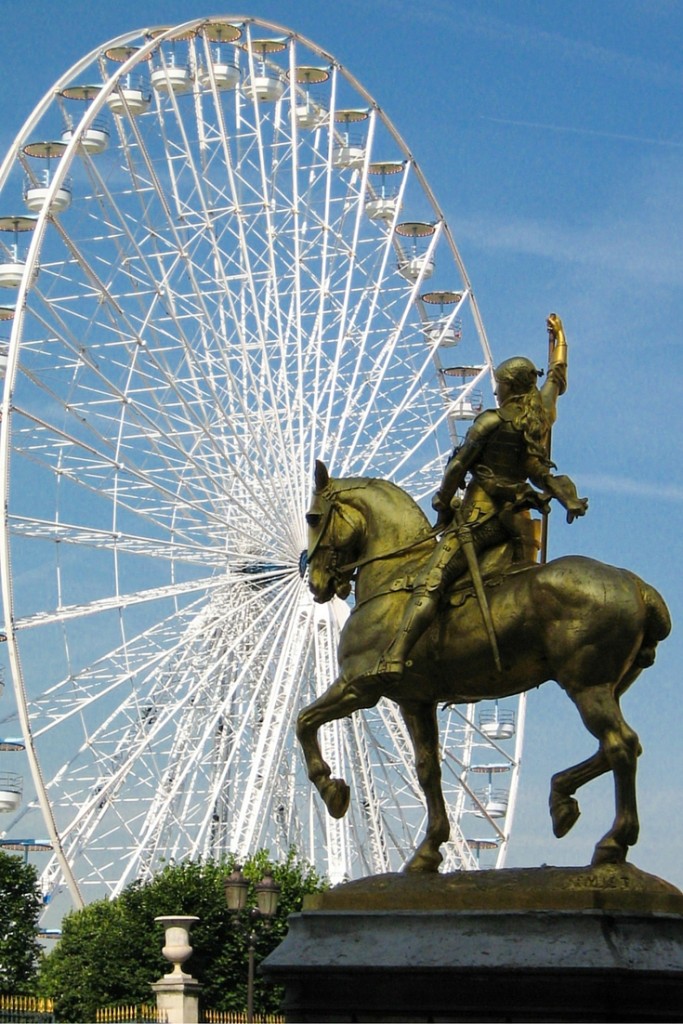