The Zaanse Schans windmills: A charming day trip from Amsterdam 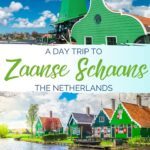 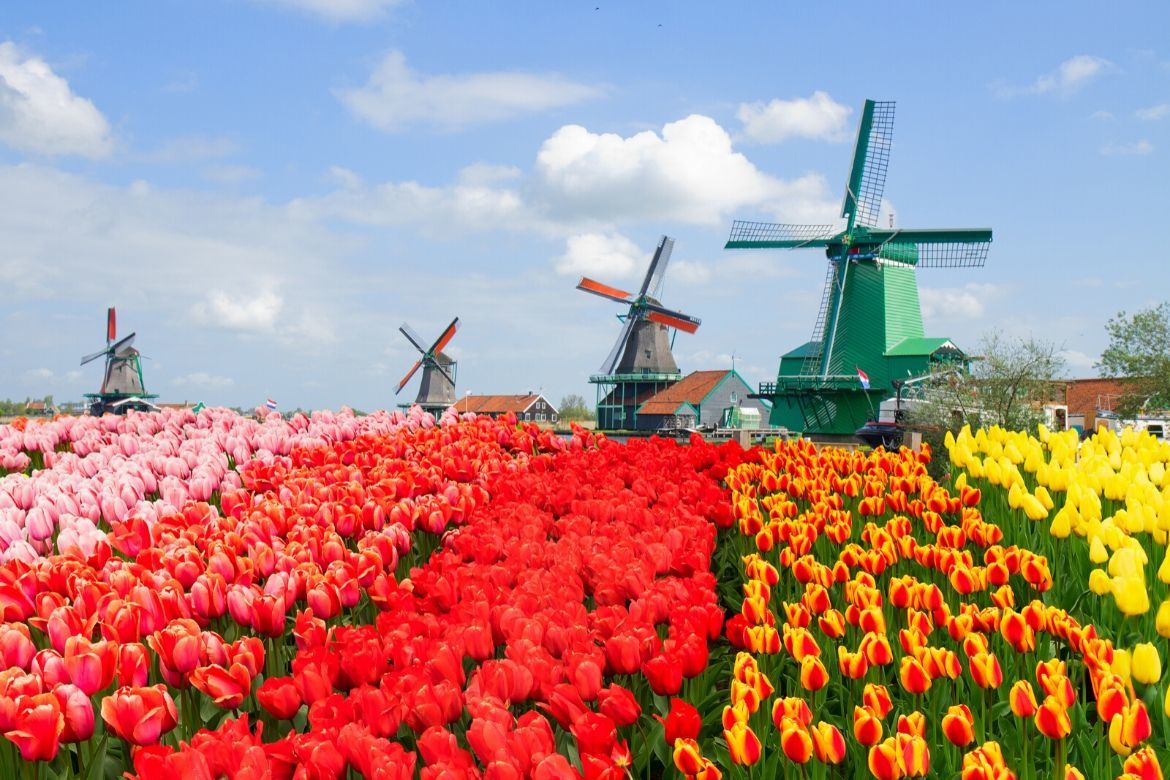 Clogs, tulips, cheese and windmills are the quintessential symbols of the Netherlands, and there’s an adorable spot where you can see them all: the Zaanse Schans village, just one hour from Amsterdam.

The heavenly smells of chocolate and fresh-baked waffles waft over you as you pass through the entrance to the Zaanse Schans windmill village, which is like a living museum. Dozens of traditional homes along with real working windmills have been brought to the community over the past century, luring nearly one million visitors to the area every single year. 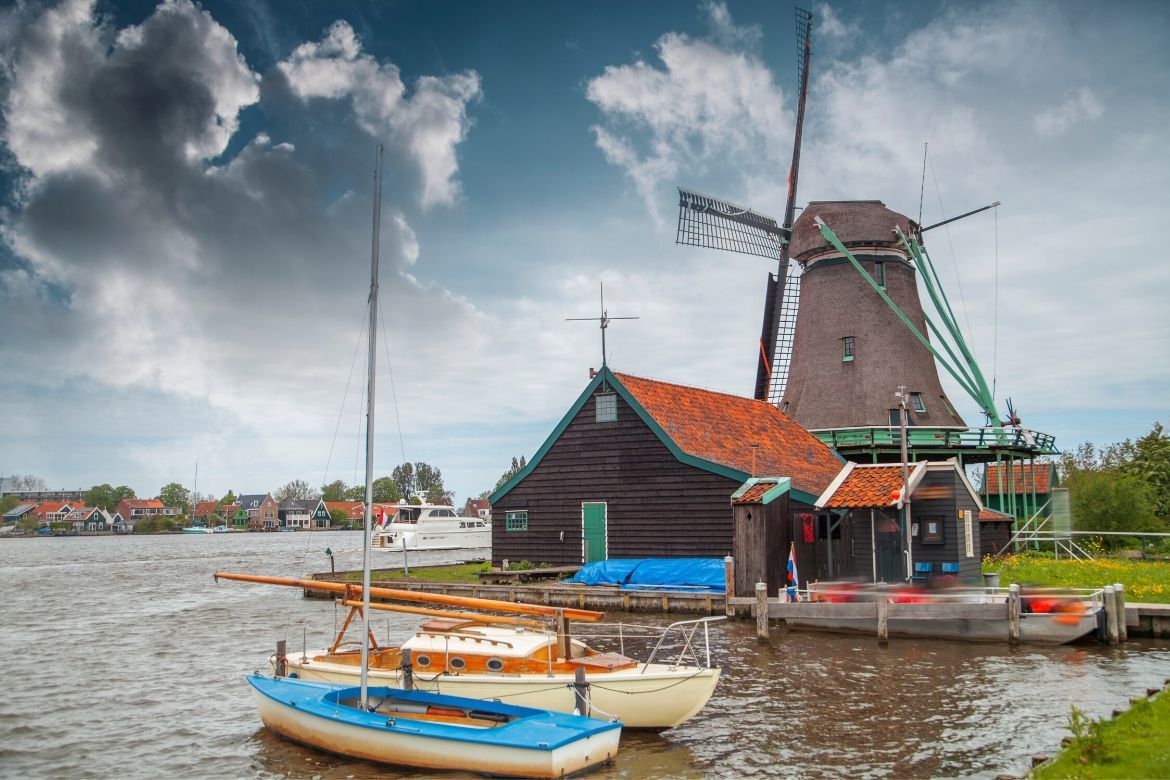 The colourful, spinning windmills at Zaanse Schans are the biggest draw, and while most are there for show there’s one that’s still in use today: De Kat, which produces the pigment and dye used in paint.

Another popular one is De Gekroonde Poelenburg, which is literally a standout thanks to its lime-green facade. Some of the windmills are open to visitors for a small admission fee, which includes the chance to walk up to a viewing platform to look out over the bright-blue lake. 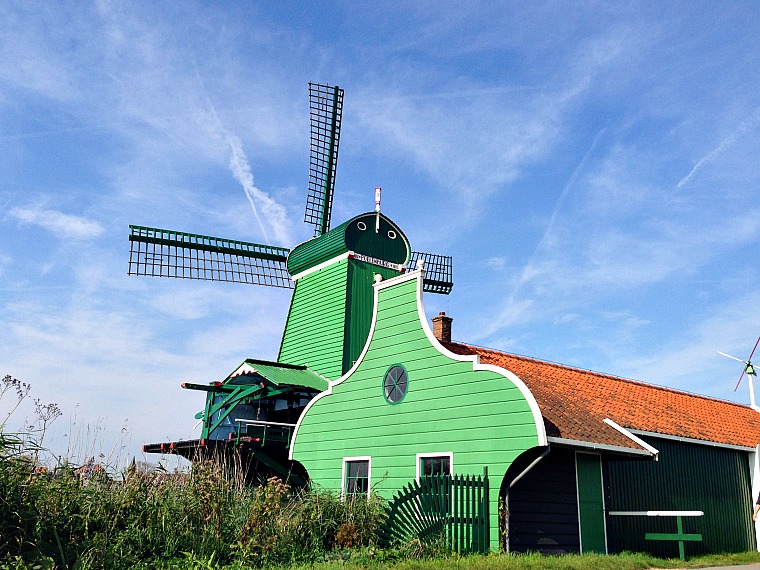 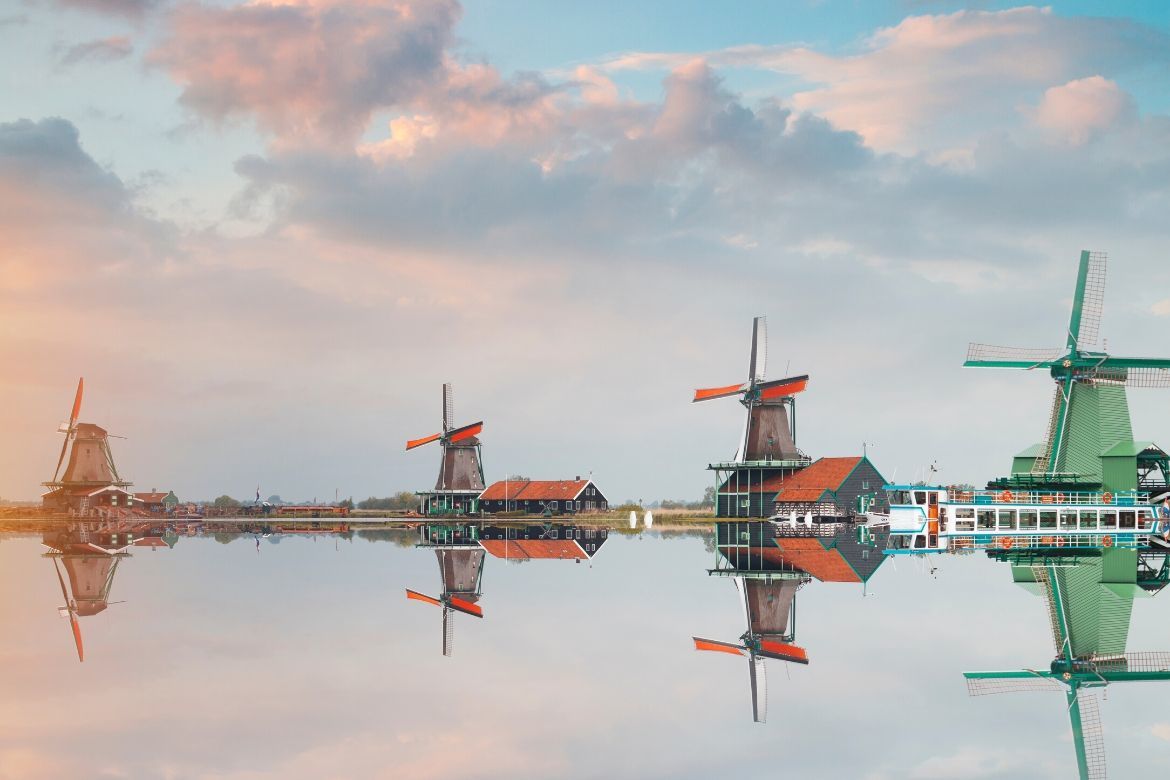 After exploring the windmills, guests cross over a cute little bridge towards the bleating sheep lounging in the green fields. Chickens roam the pathways, ready to pounce on any food a child might inadvertently drop. 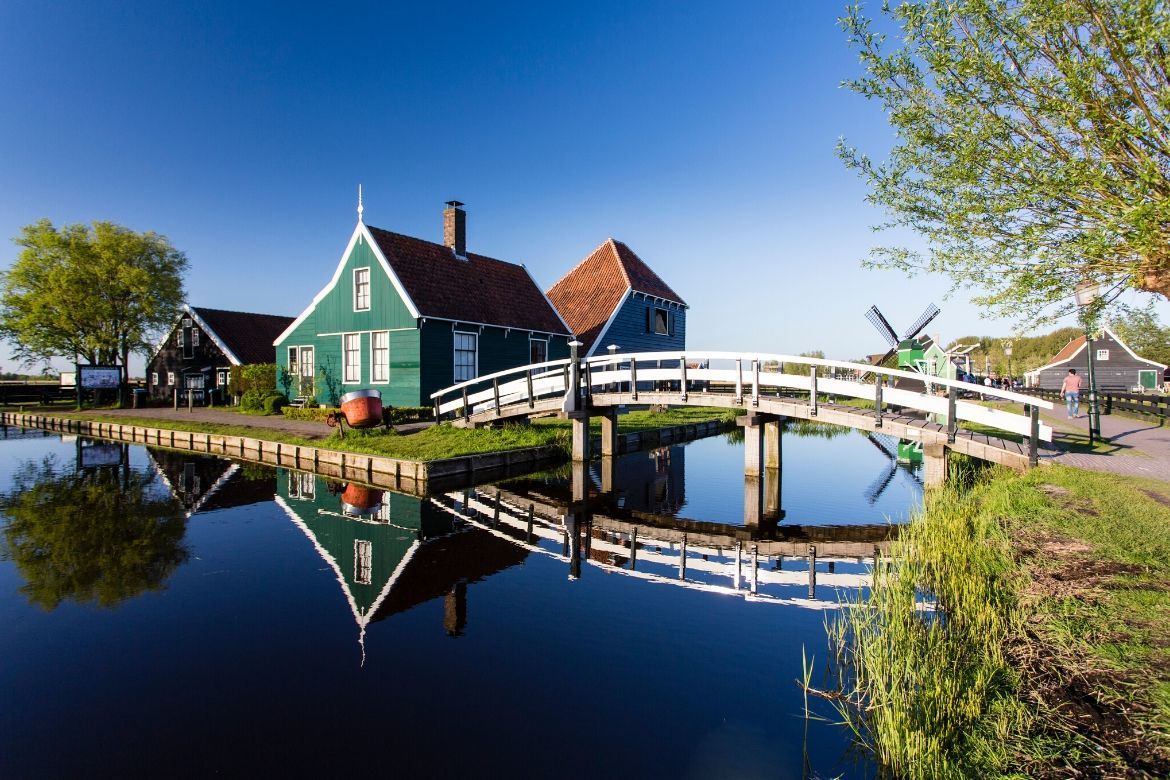 There are a number of historical buildings to explore as you tour Zaanse Schans, including: 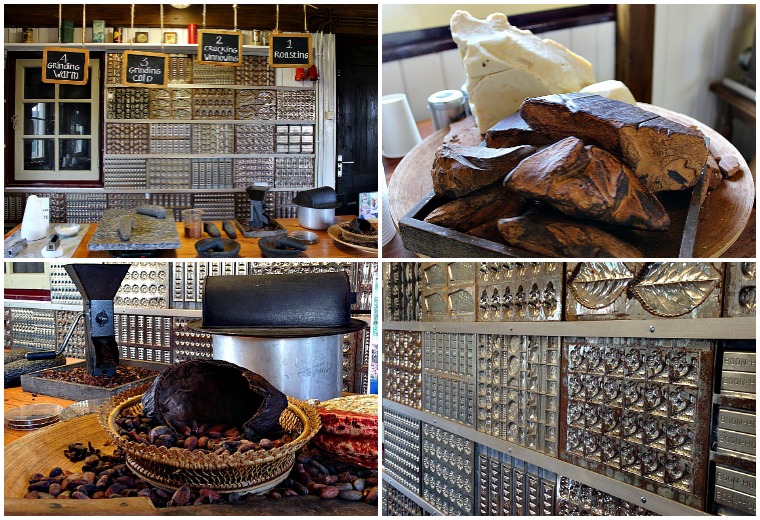 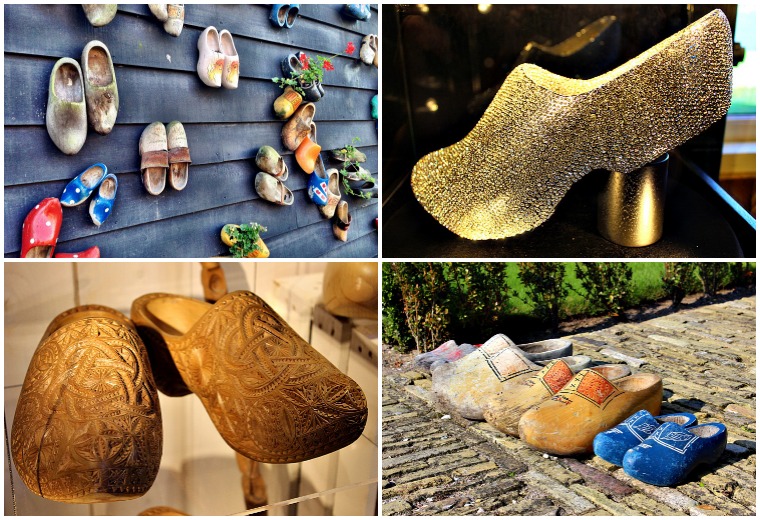 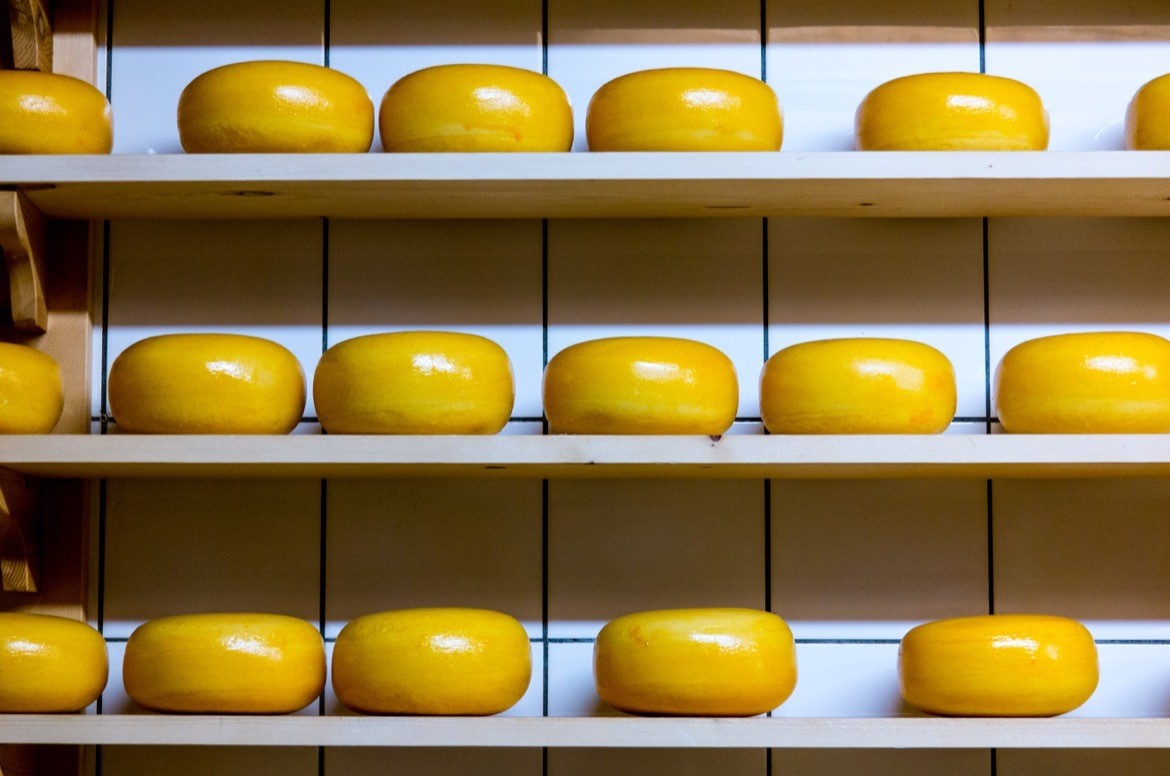 Once visitors get their fill of all the culinary delights, they can walk it off with a jaunt through the trails that wind through the marsh surrounding the windmills. In true Dutch fashion, bike rentals are also available.

Visiting the windmills in Zaanse Schans can take as little as a couple of hours, done as a day trip like this one from Amsterdam which also visits some surrounding areas, or stretched out over a couple of days depending on how much you choose to explore. There’s a quaint bed and breakfast called Heerlijck Slaapen op de Zaanse Schans which is right in the village, as well some higher-end restaurants that boast patios perfect for taking in the views. Click to book

Boat rides are also available, which cross the water toward the historic homes overlooking the lake. 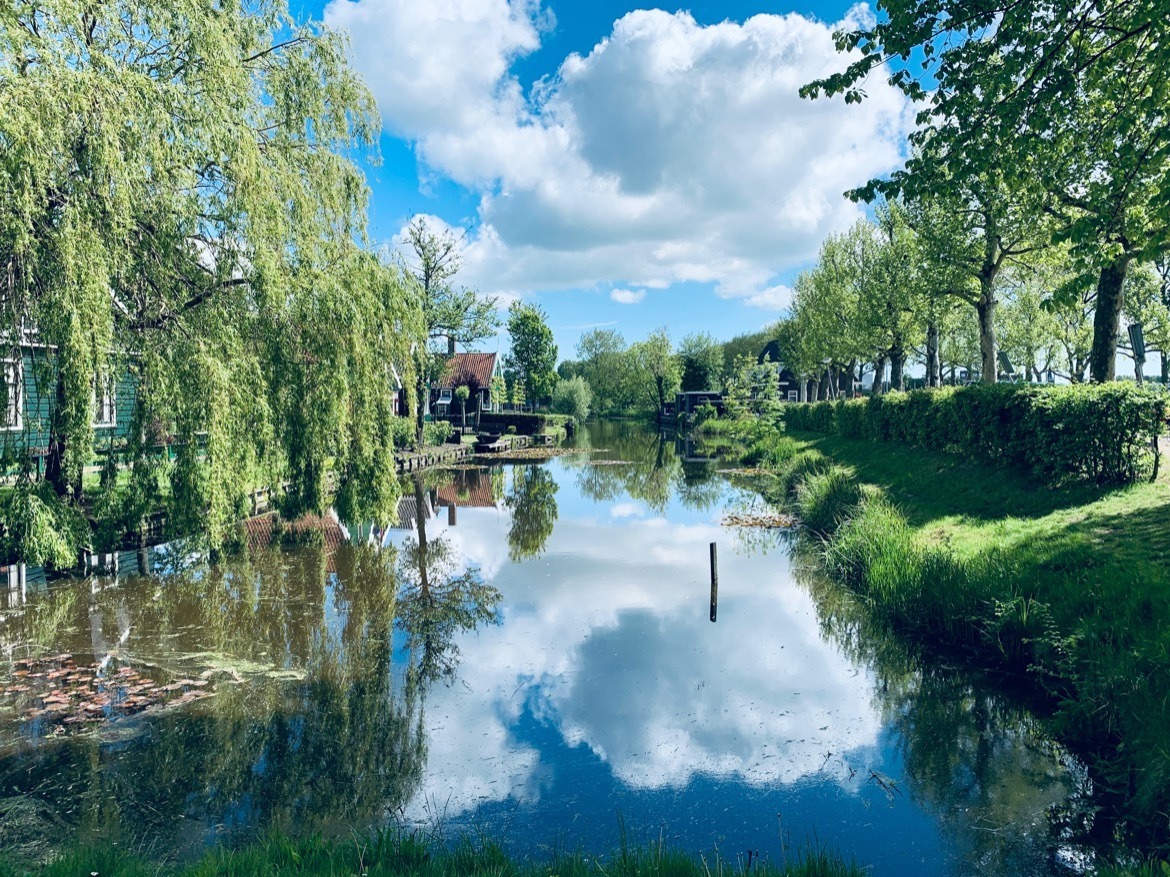 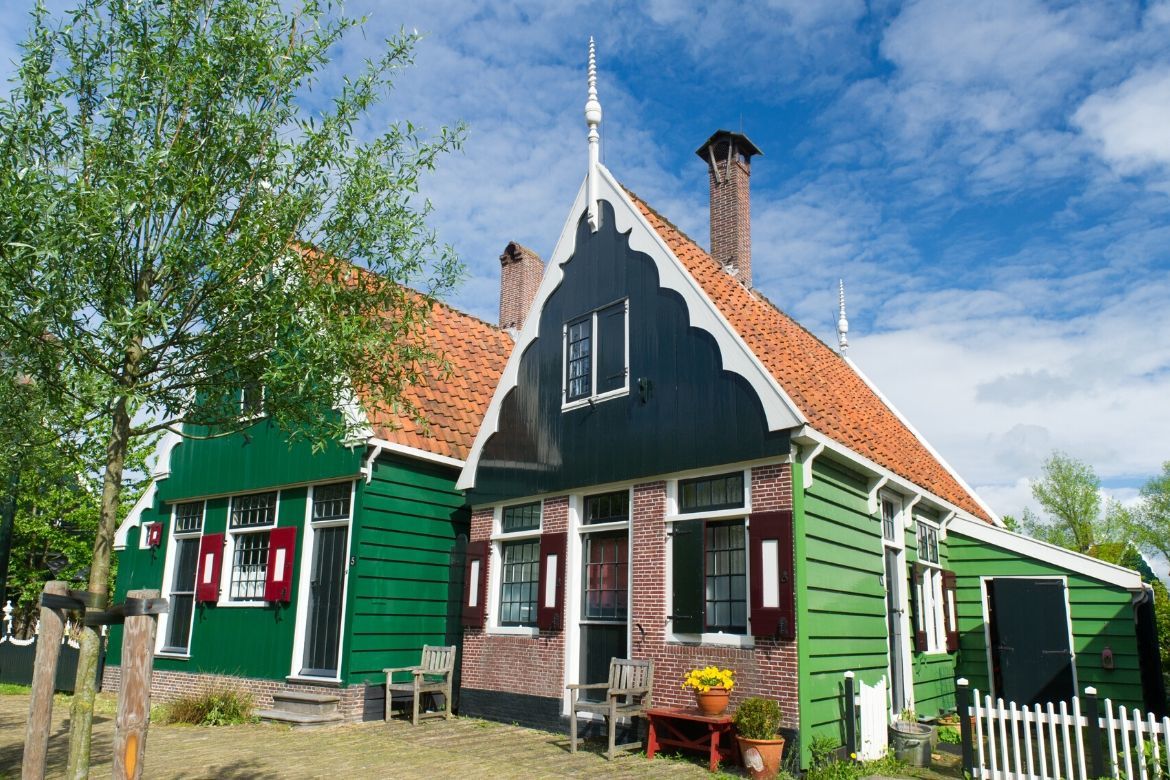 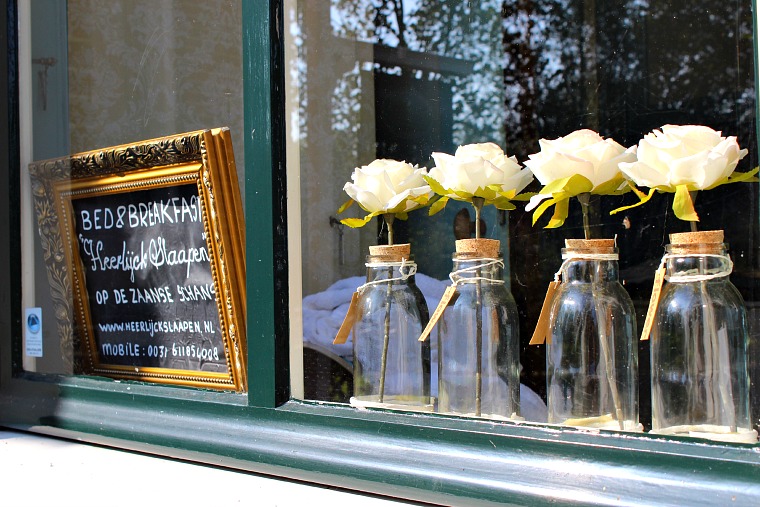 Overall, Zaanse Schans is a charming little place that beautifully sums up Holland’s history, and a fun way to see the best windmills near Amsterdam. 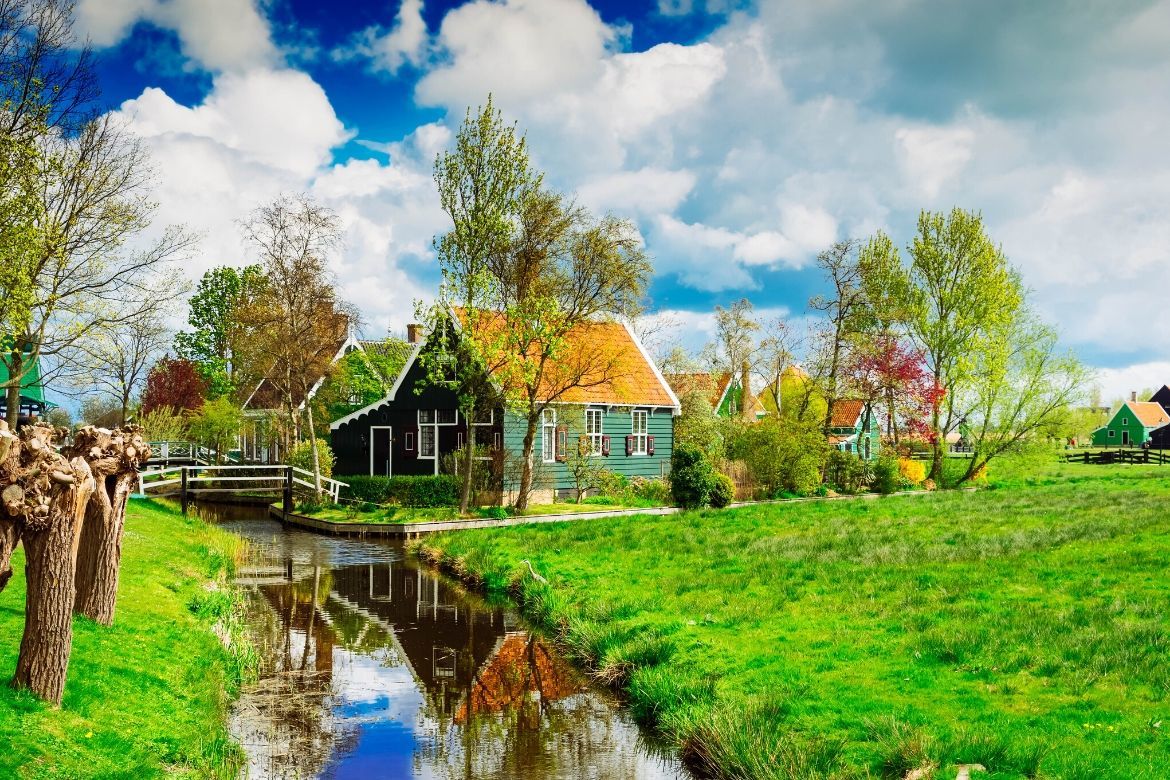 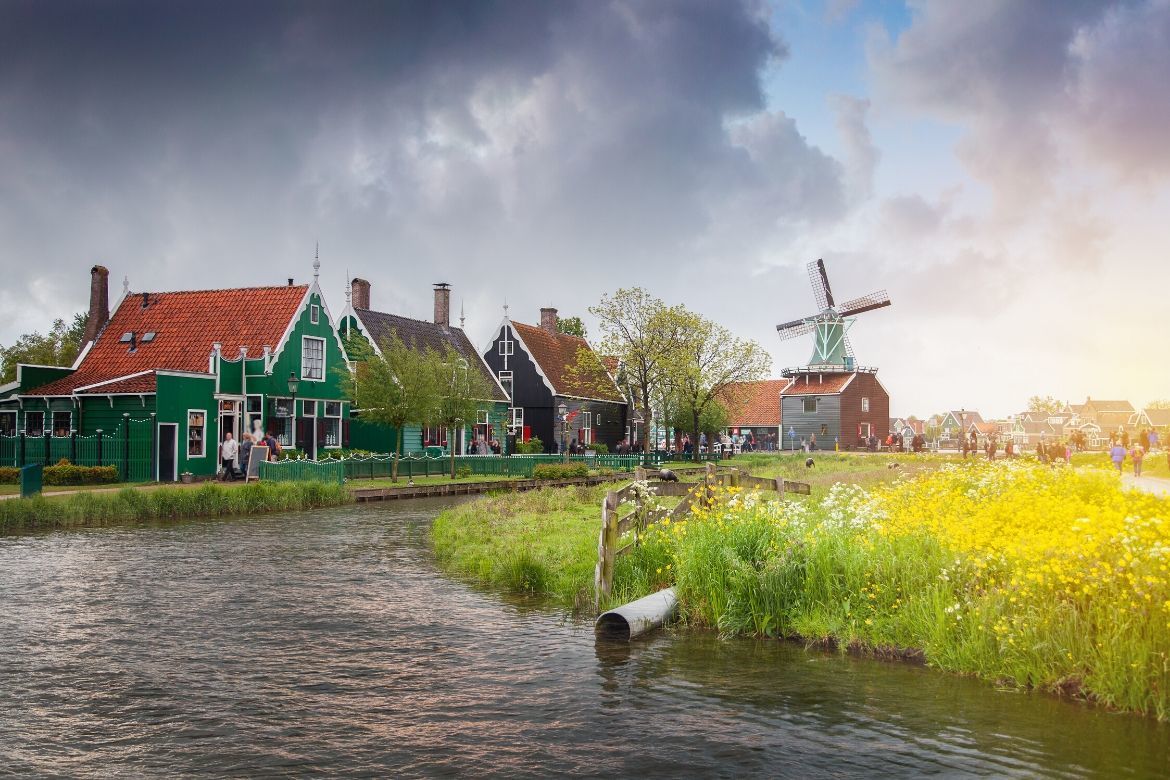 How to get there: It’s about a half hour drive by car from Amsterdam, or 40 minutes each way by bus from Amsterdam’s Central Station. #391 comes every 15 minutes, costs 5€ per person each way, and tickets can be purchased from the driver. Another option is to book this hop on/off bus ticket so you can visit both Zaanse Schans and Zaanstreek at your leisure. Click to book

It’s also possible to bike to Zaanse Schans from Amsterdam—while it may be far, at least it’s flat!

Don’t miss: There’s a high viewing platform just behind the parking lot at the main entrance, which visitors can climb up for a birds-eye view of the windmills and pathways surrounding Zaanse Schans. 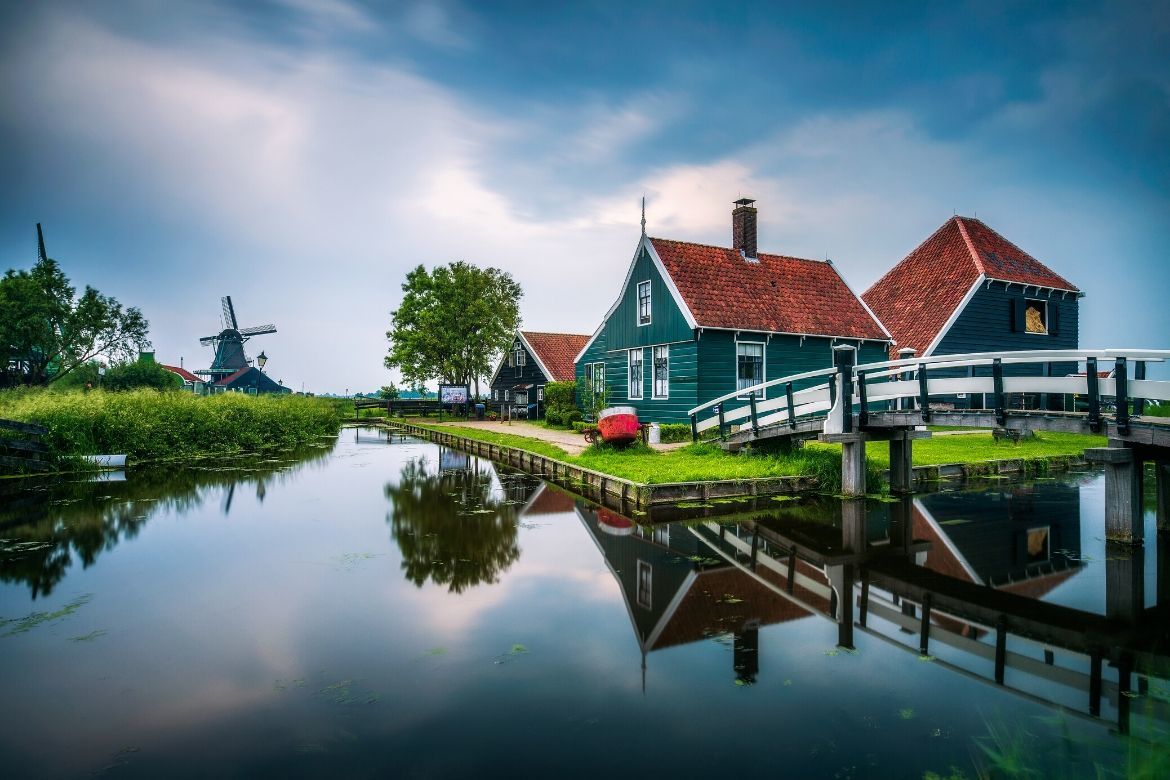 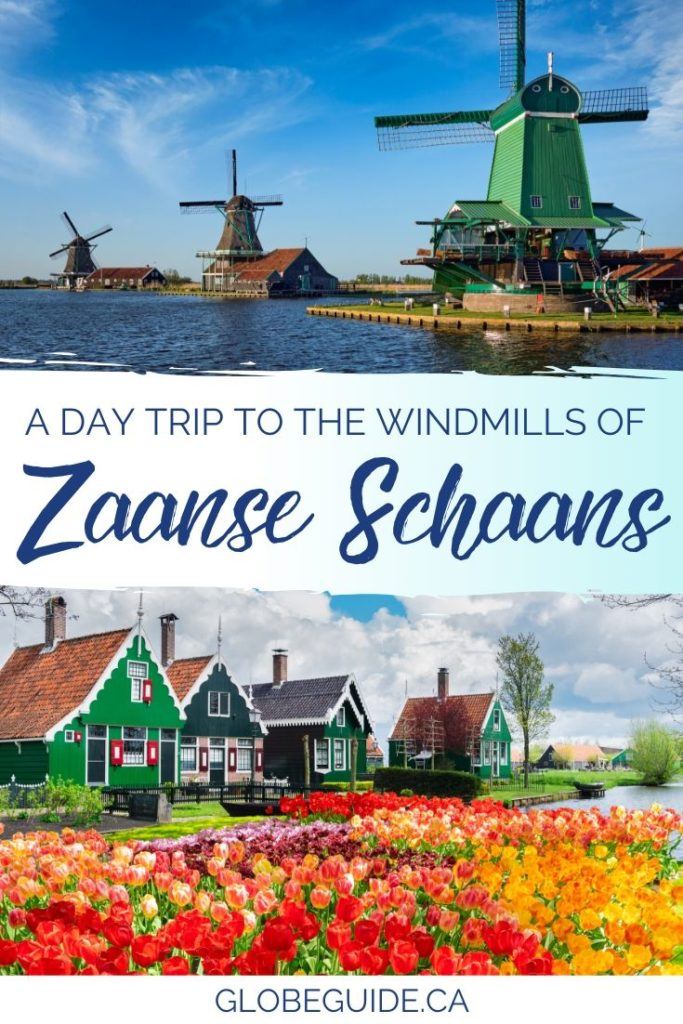 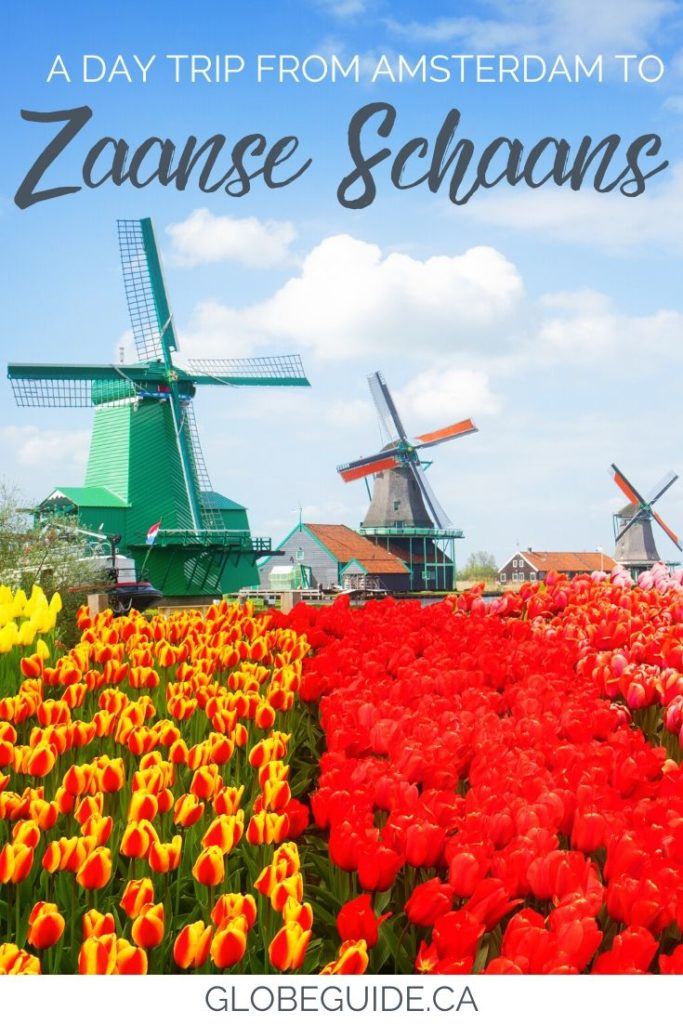 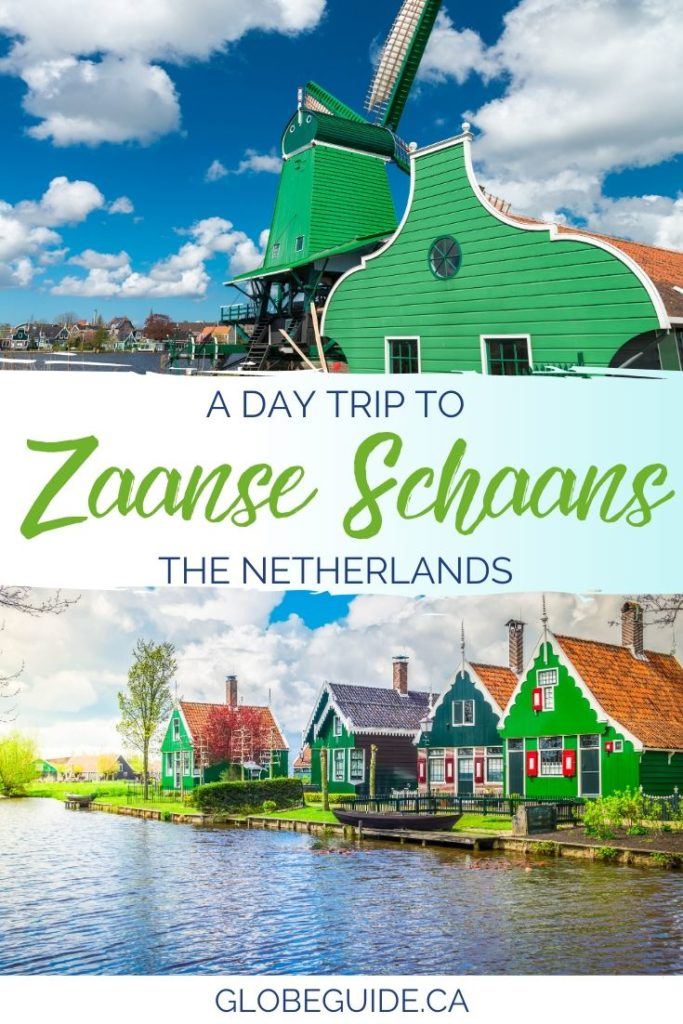