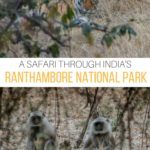 A flash of stripes through the long blades of grass betrayed her presence.

Our rugged 4X4 slowed to a crawl, the driver killing the engine as we pulled up behind the other vehicles already parked on the side of the dusty trail. There were more than a dozen people inside each open-air truck, but save for a few excited murmurs the jungle surrounding us was eerily quiet. The monkeys and deer had long since scattered, and birds safely perched high up in the trees silently watched the scene unfolding below, seemingly aware of the excitement that was about to play out. 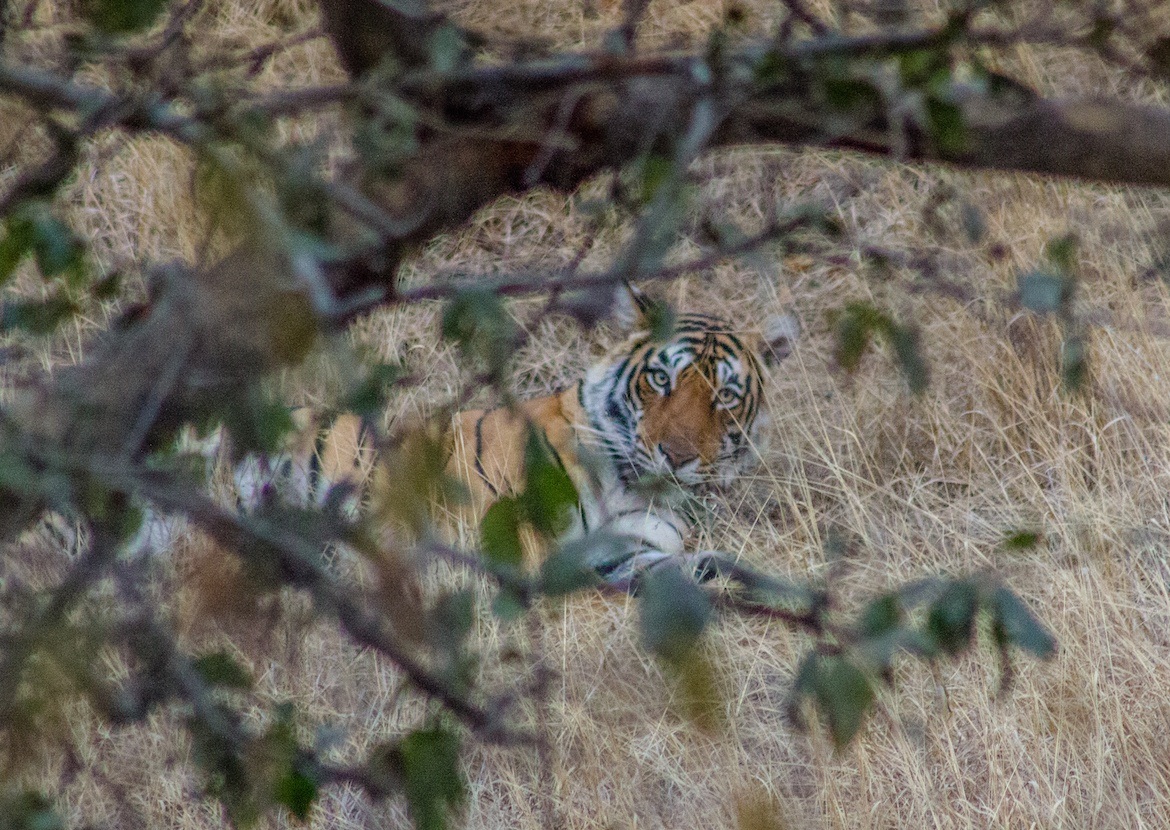 As we parked, another truck rumbled up behind us and as if on cue she stirred. The sleeping cat had awoken, and suddenly she was on the move, gracefully snaking through the arid brush as branches snapped underfoot. The drivers and guides jumped into action: it was tiger tracking time. 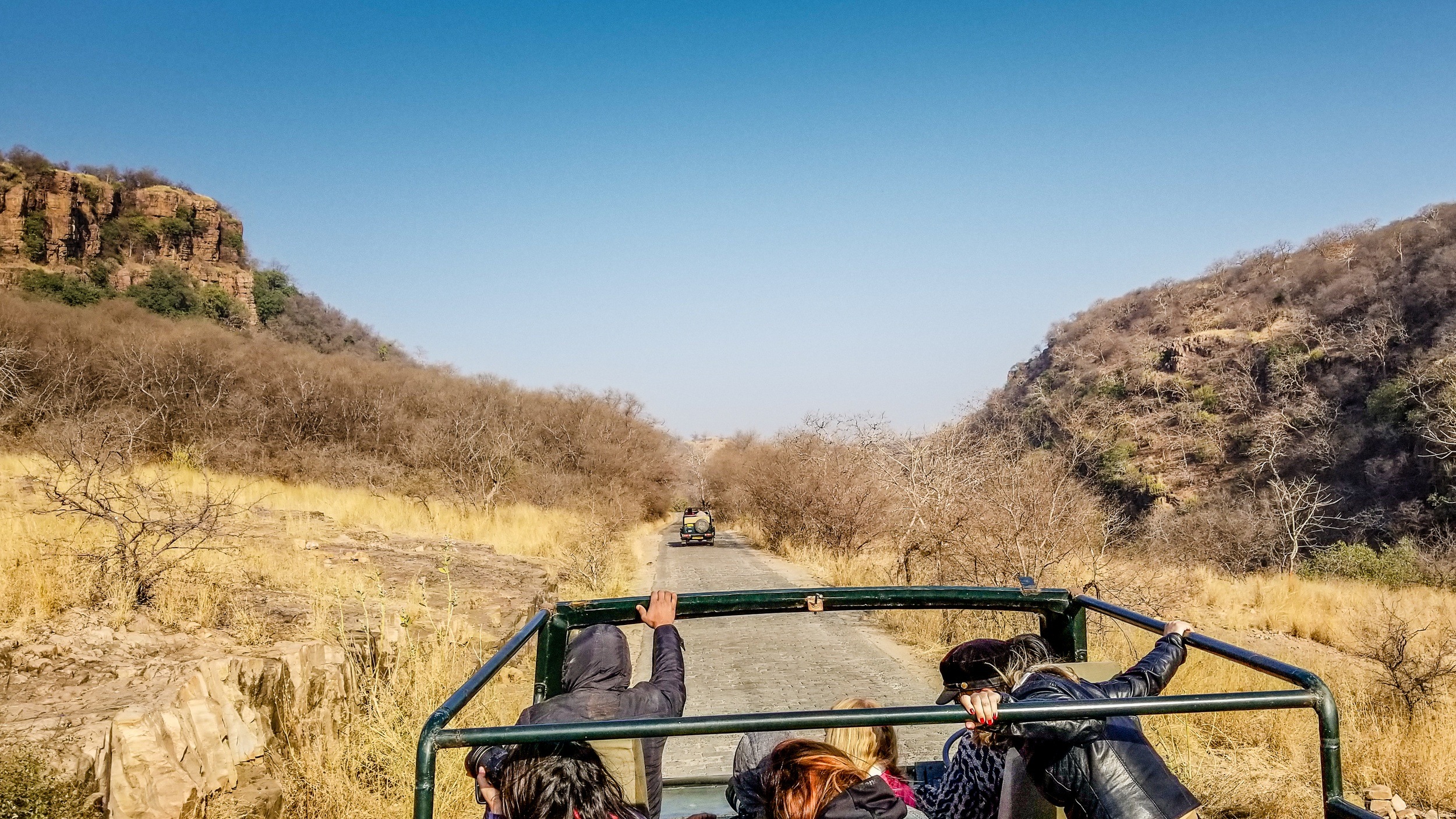 On this sun-soaked day, we were in Ranthambore National Park, a popular spot in India’s Rajasthan state where visitors hope to get lucky enough to see a rare Bengal tiger in its natural habitat. It’s no easy feat, as the reserve is spread out over 400 square kilometres and only about 70 tigers call it home.

Instead, most travellers settle for sightings of crocodiles lazing on the river banks or black face langur monkeys scurrying around tree trunks—consolation prizes that still make a visit to the park worthwhile. 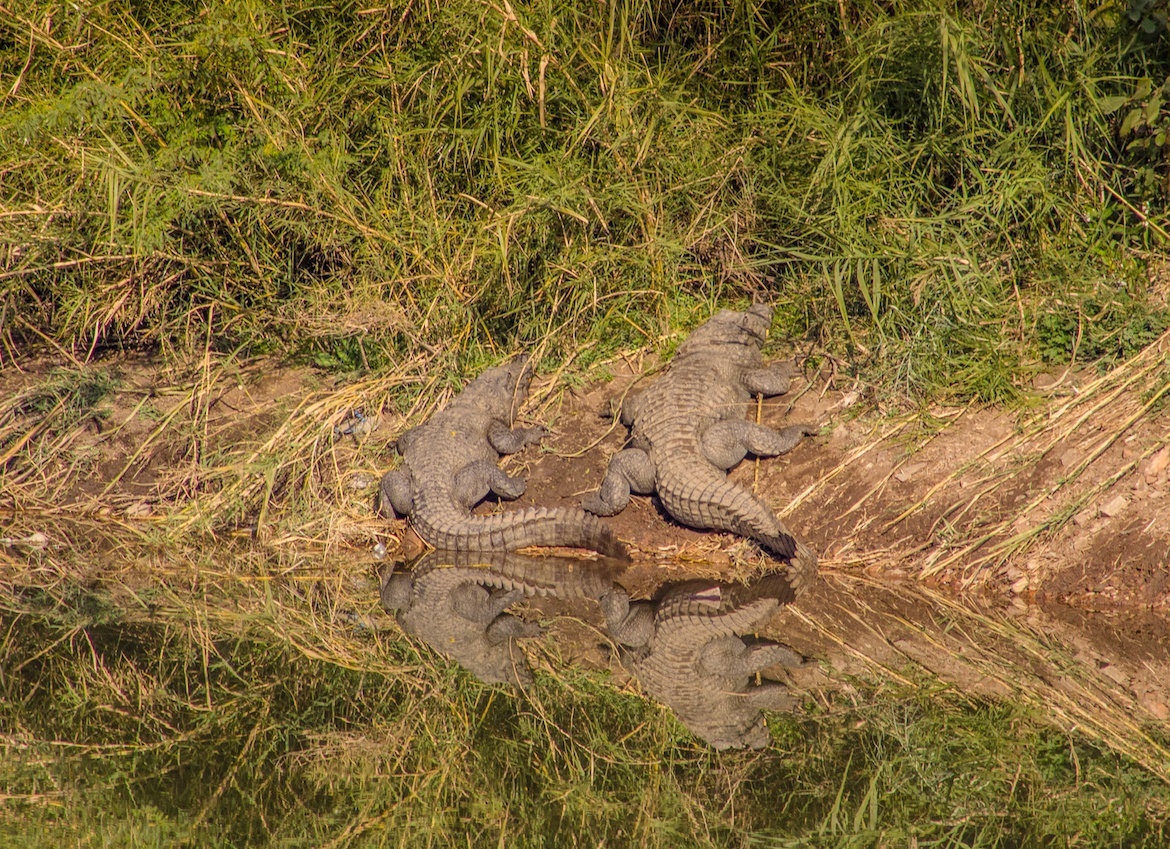 Crocodiles lazing on the river bank 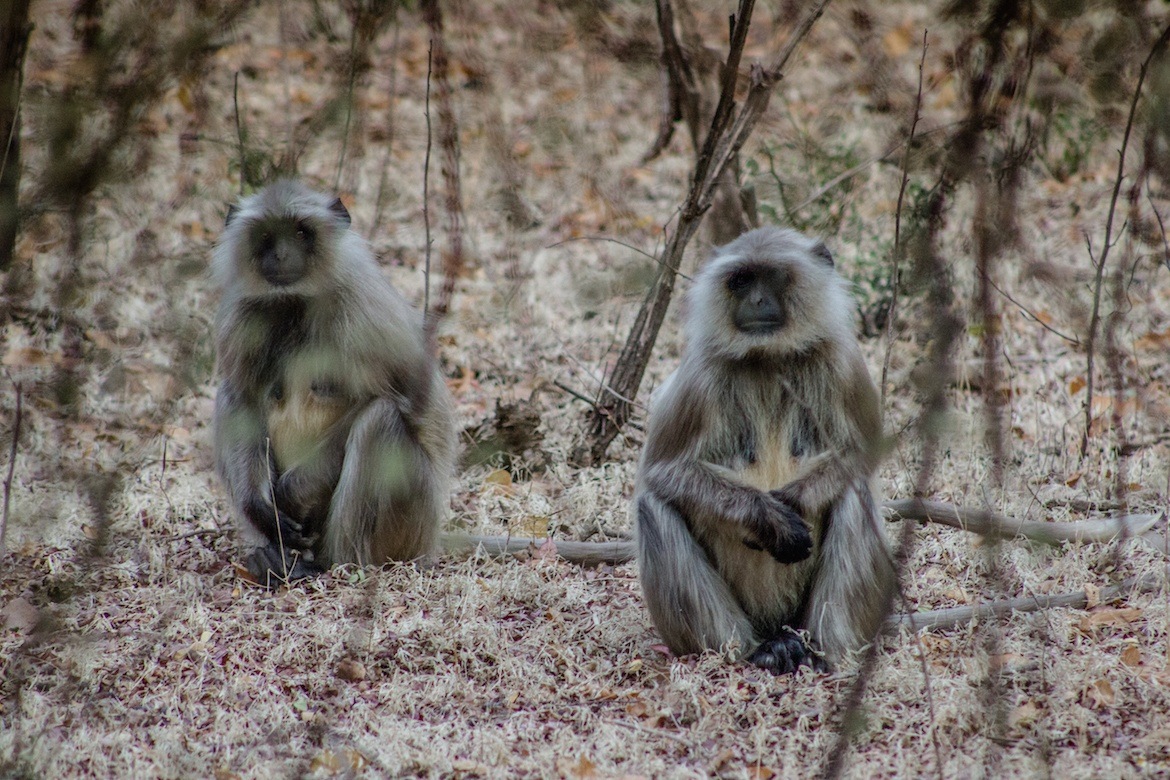 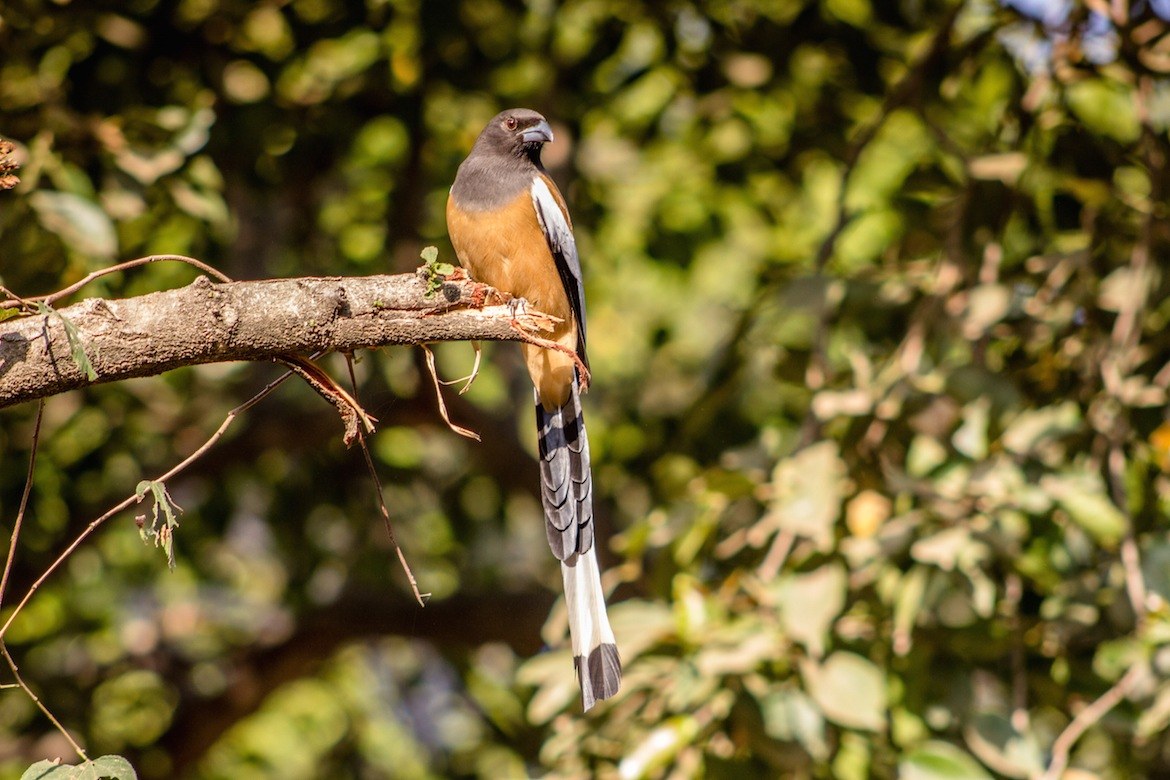 Fortunately, Lady Luck was on our side.

Just a few minutes after driving through the park entrance we saw her lazing around in the grass: a female cat that guides have affectionately named Arrowhead. With half a dozen vehicles angling for the best view and plenty of visual obstructions it was difficult to see her hidden behind the cover of the dry, deciduous forest floor, but her rich orange coat and dark, beady eyes gave her away.

We’d clearly caught her in the middle of a morning nap, as she hardly stirred the whole time we sat there quietly gazing at her, which must have been for at least an hour (none of us dared look away to check the time). Occasionally her powerful jaws would open in a wide yawn, or she would slowly turn her head and glance over at us as if to say “are you guys seriously still here?” 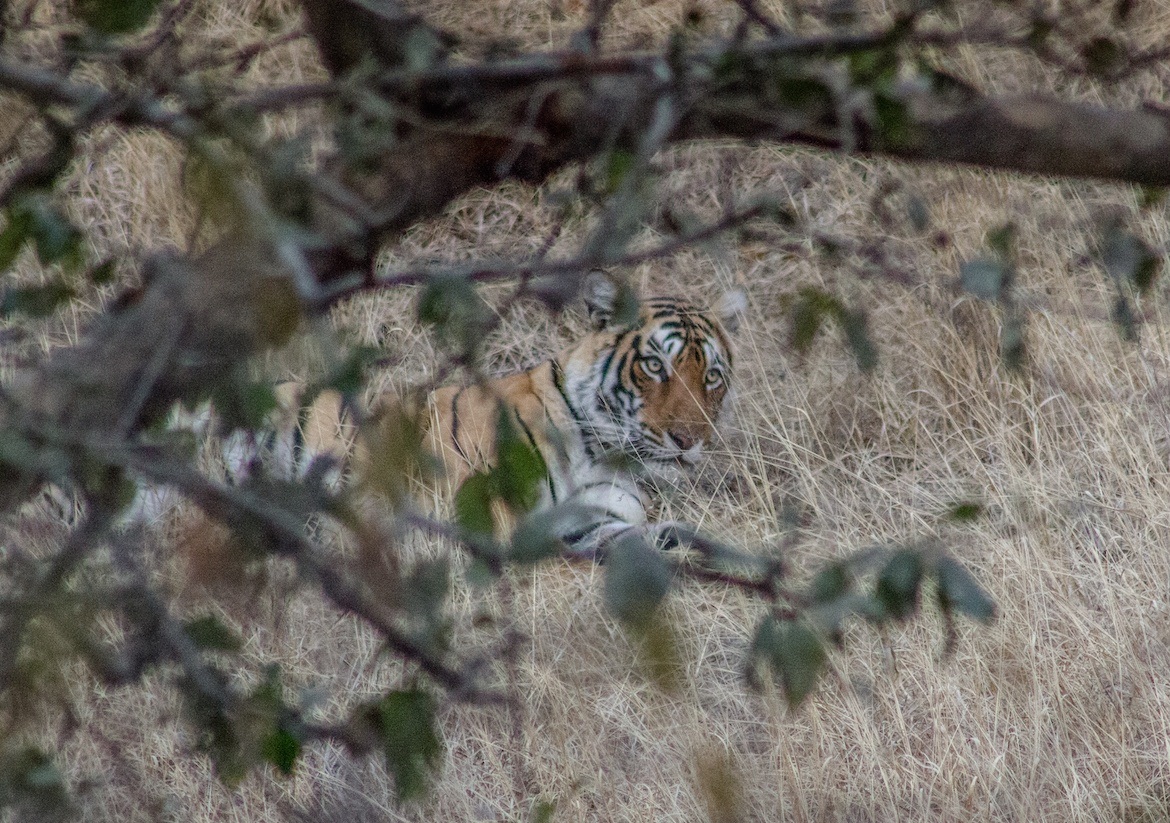 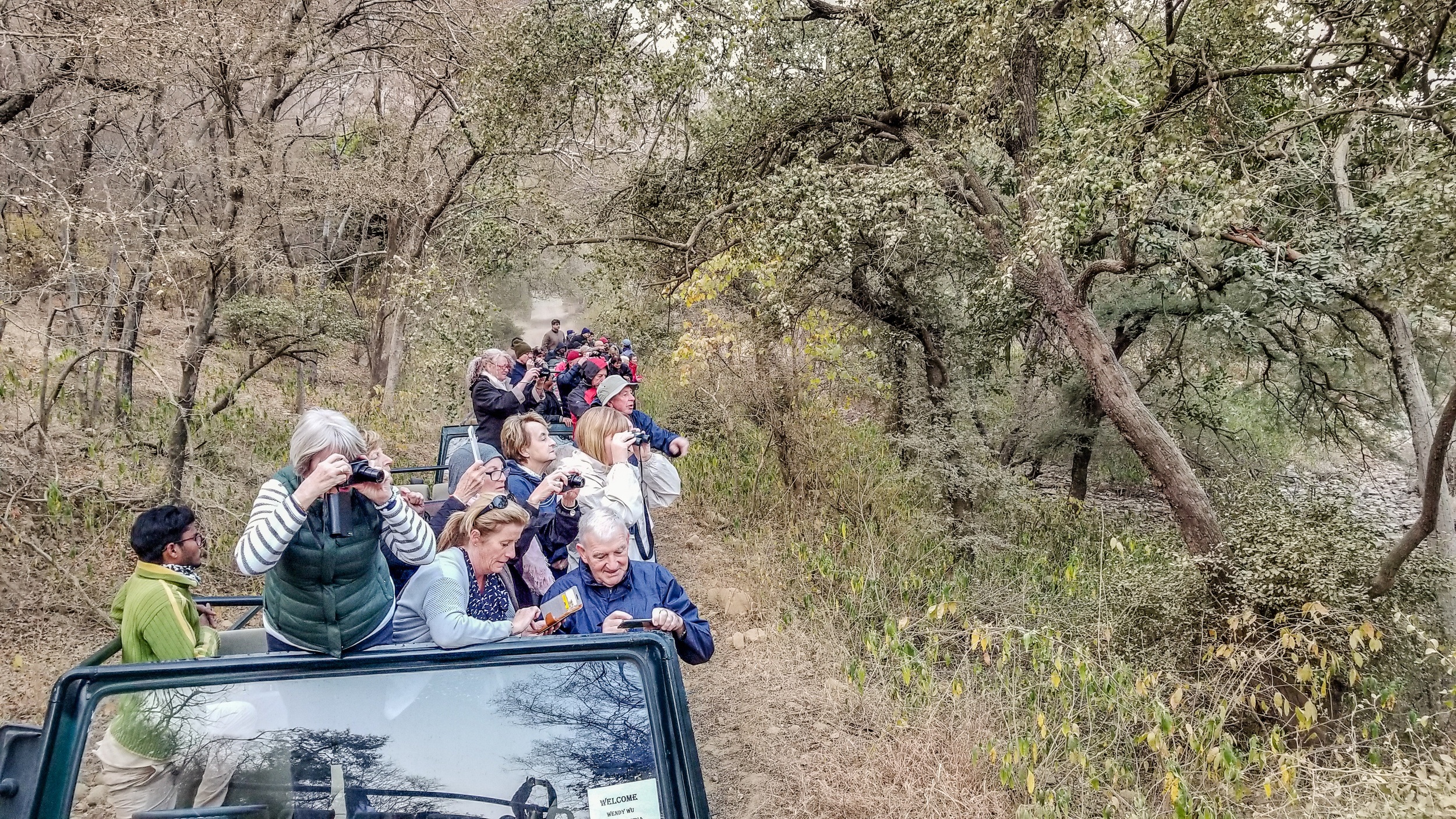 As our tiger spotting had proven successful so early on, we still had plenty of time left in our Ranthambore safari to explore the reserve, which is considered one of the more popular national parks in India.

Over the next couple hours, our 4X4 navigated along the narrow, dusty trail which is framed by the Aravalli and Vindhyachal ranges, and winds through a forested canopy of leafy trees, concealing the likes of bearded owls and tropical birds. We stopped often to coo over the furry monkeys who seemed unfazed by our presence, and admire the graceful spotted deer grazing in nearby meadows. 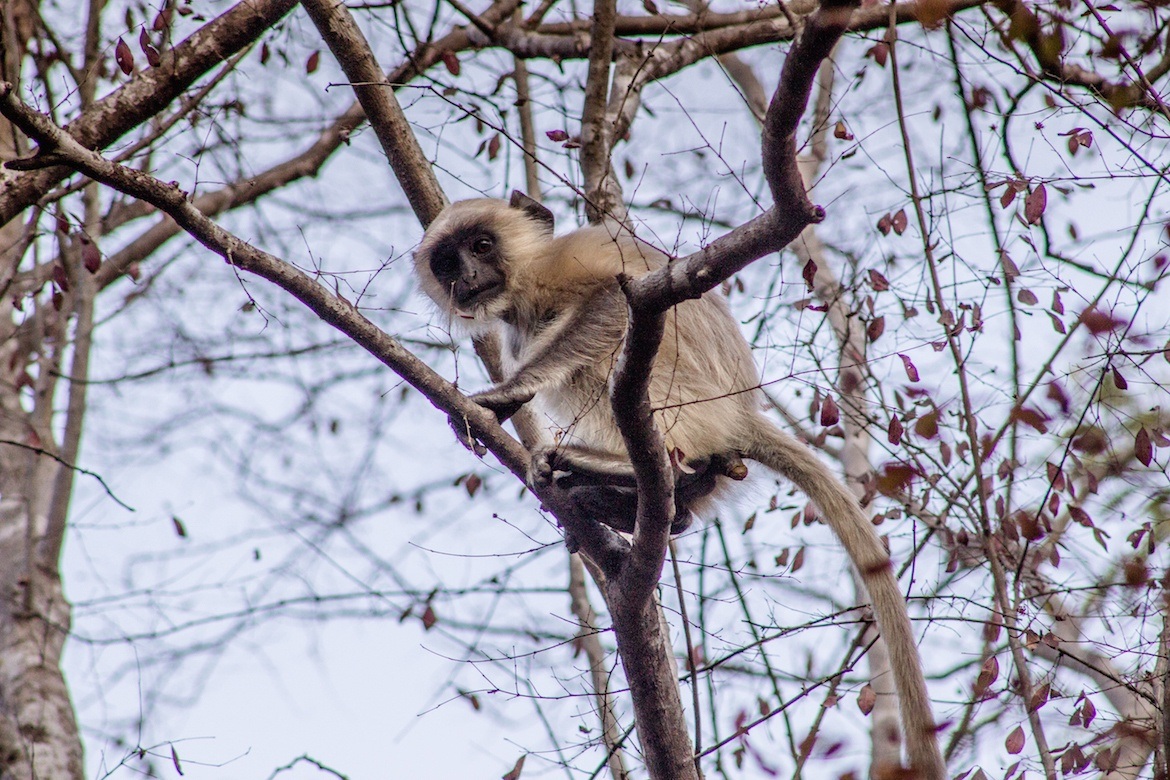 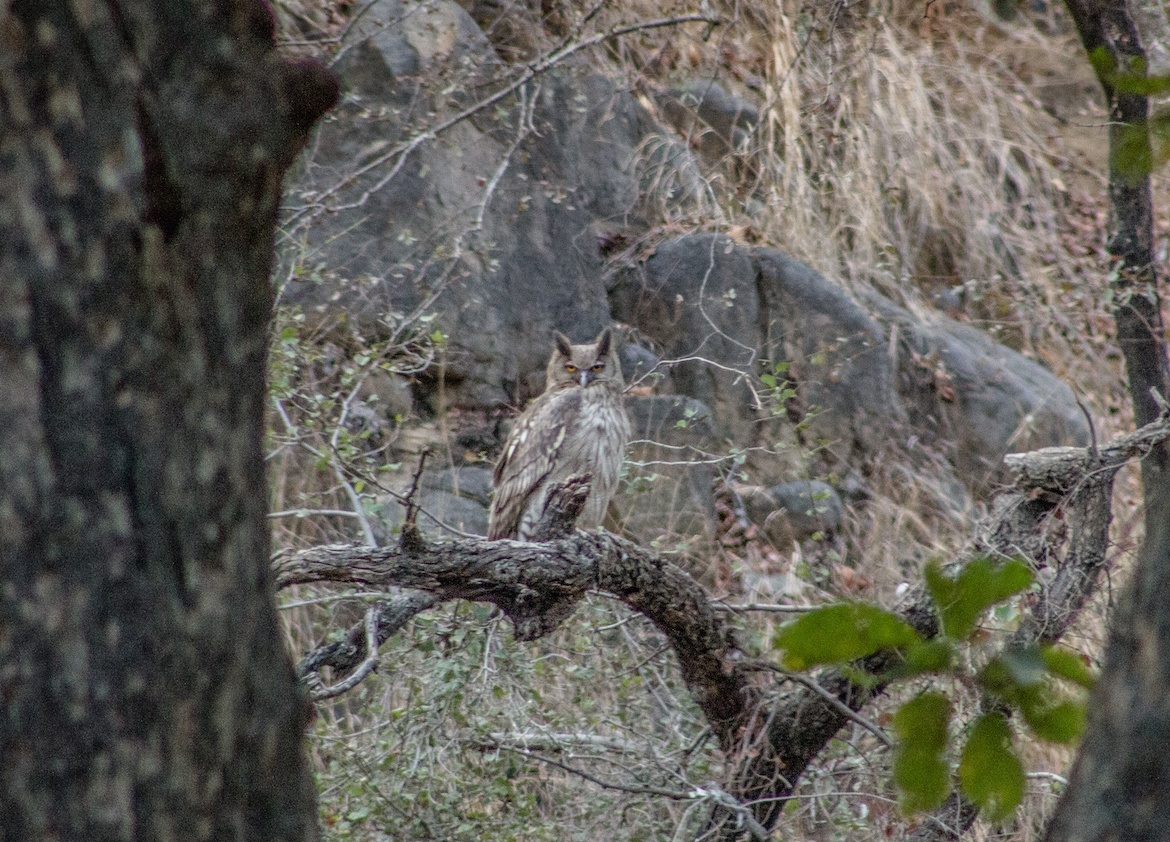 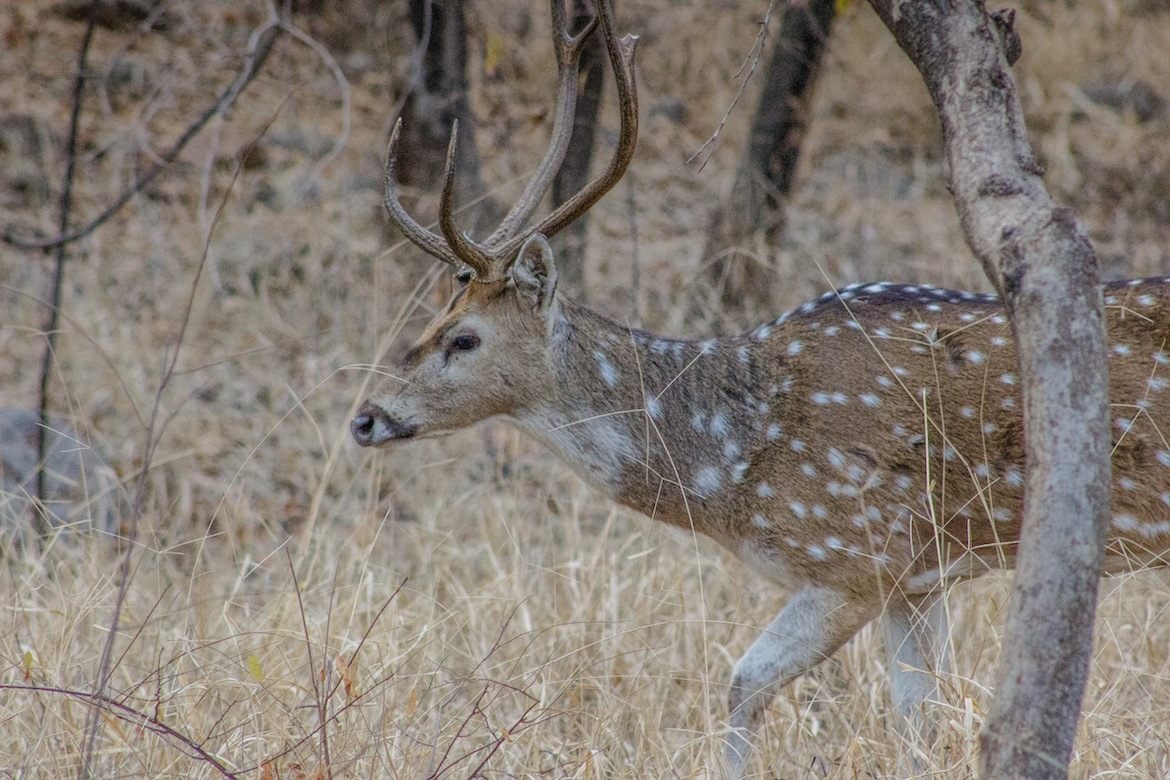 As entertaining as they were, it’s hard to compete with the magnificence of a bengal tiger, so eventually our driver looped around and headed back toward the trail where we’d started. And wouldn’t you know it, Arrowhead was still there.

But this time, she was on the move. 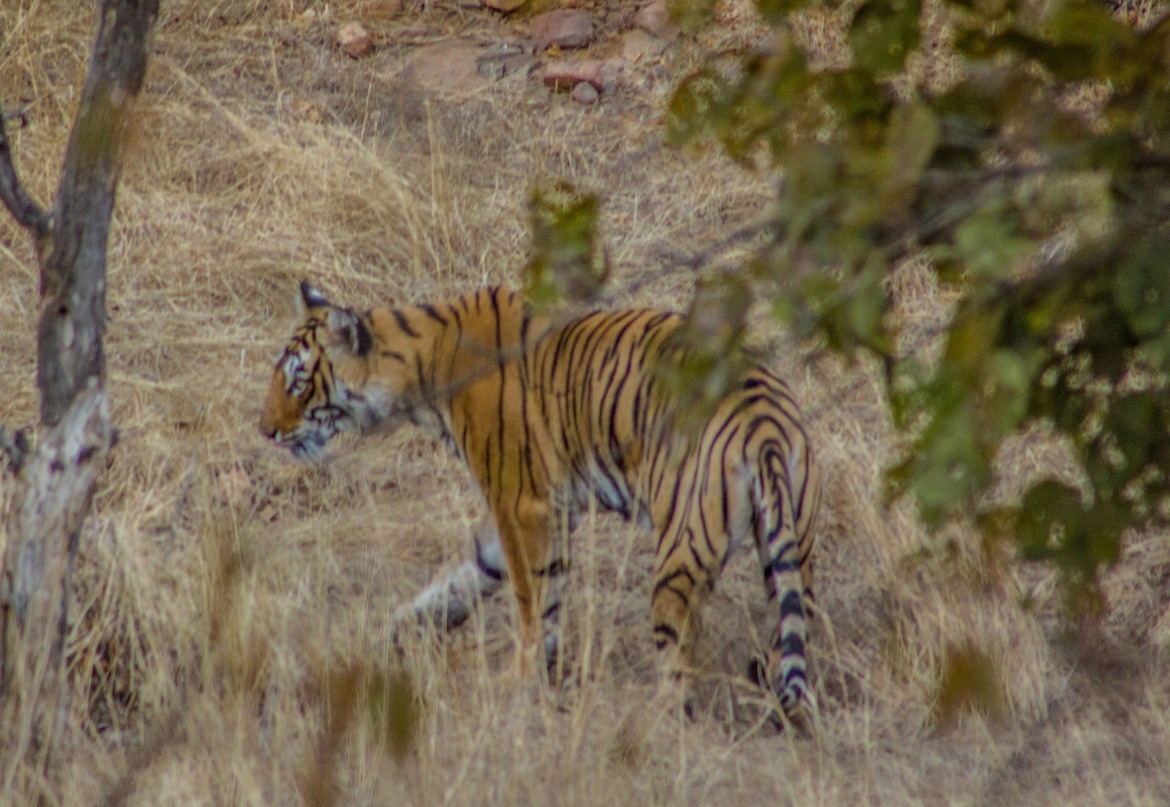 Just as we pulled up behind a long line of Jeeps full of visitors who had been watching her for hours, the tiger rose.

For the first time we were able to fully appreciate her power and strength as she effortlessly moved through the thick brush, dry twigs snapping in her wake as she stealthy moved through the jungle. Car engines sprang to life, the decibel level suddenly reaching a fever pitch as excited travellers screamed out in excitement every time we caught a glimpse of her through the trees, and guides shouted out directions to the drivers doing their best to navigate a challenging combination of narrow uneven roads, a dozen other vehicles, and an unpredictable wild animal.

Seemingly unfazed by the commotion her sheer presence was causing, Arrowhead picked up the pace, disappearing behind a thick grove only to emerge on a different hill. The game of cat and mouse continued for several minutes, as she lurked through the woods in search of her next meal.

Each disappearance prompted a squeal of tires, as drivers put pedal to the metal in hot pursuit of the elusive cat. From time to time she would emerge in the distance, rewarding us with fleeting glimpses of her majestic stature before slipping back into the dark forest.

Eventually she headed up towards the mountain range, vanishing into an area she knew none of us would dare follow her into. 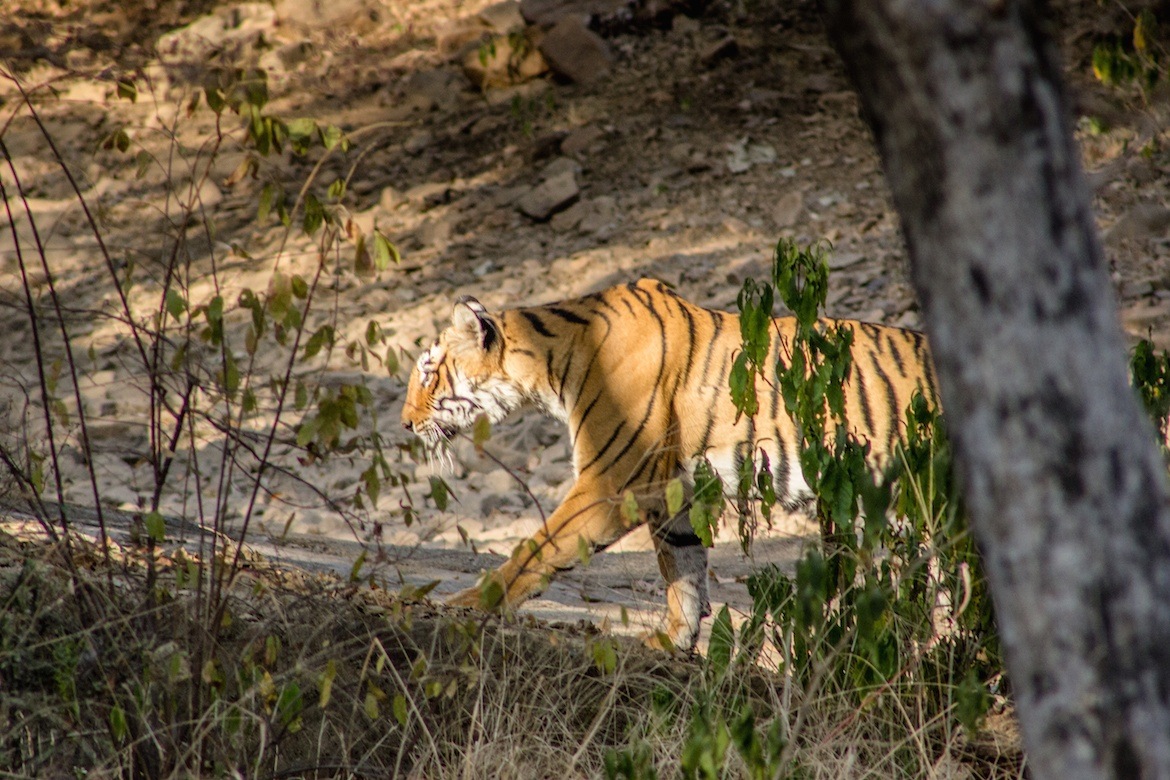 Basking in the thrill of the chase and thanking our lucky stars that we’d managed to see a tiger not once but twice, we slowly drove out through the park gates, signalling the end of our epic Ranthambore safari. When it comes to tiger tracking, it was clear to all of us that this day was as memorable as they come. 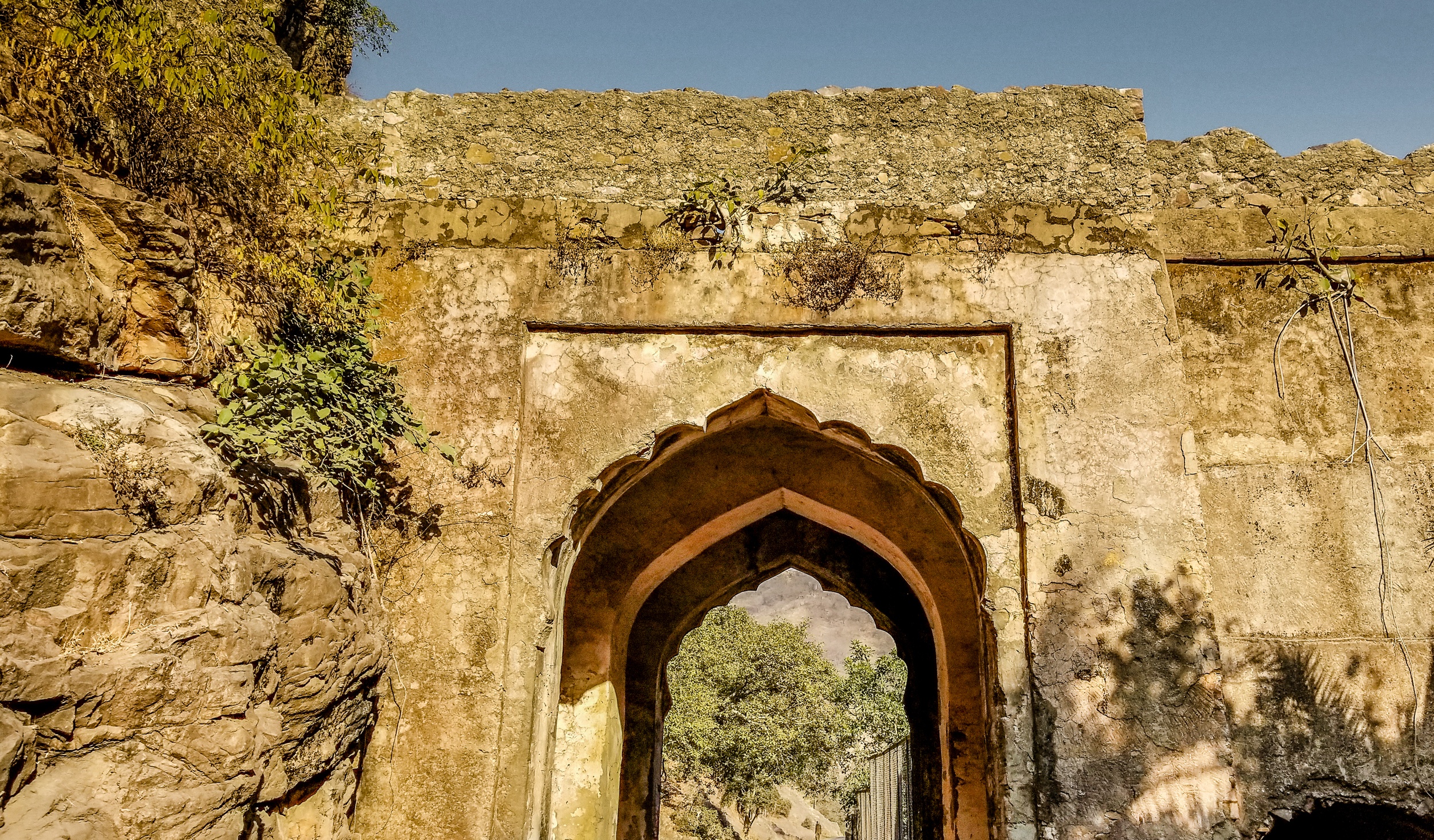 Ranthambore safari price: The Ranthambore National Park entry fee starts at 1300 rupees per person for foreigners, and safaris can be booked here. However…the process is painful. Visitors are far better off pre-booking a tour like this one, or through a travel agency in India. Click here to book

When to go: Ranthambore National Park is open from October through June, with wildlife sightings being most frequent between March and June. Safaris either leave first thing in the morning (from 6:30 AM to 9:45 AM) or in the afternoon (2:15PM to 5:30 PM).

What to bring: Ranthambore tiger safaris typically depart at dawn before the sun comes up, which means it can be quite chilly. Be sure to pack lots of layers, and if you happen to forget something there are vendors at the park gates who sell hats and scarves. You’ll also want to bring a telephoto lens, as standard point-and-shoot cameras aren’t be able to zoom in close enough to get clear photos of the wildlife.

There are accommodations to suit all group sizes and budgets near the park. Here are some of the top-rated Ranthambore resorts and hotels: 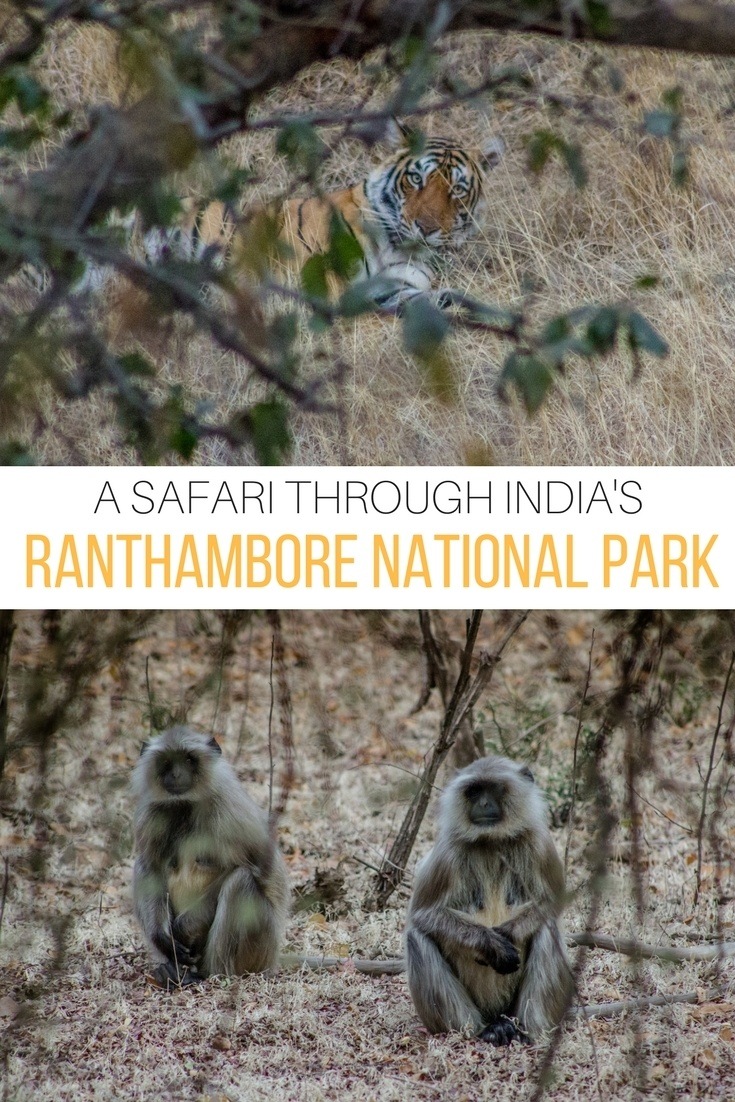