5 fun things to do in Berat, Albania

Known as the ‘City of a Thousand Windows’, Berat city is one of the most enchanting destinations in Albania. Nestled on the banks of the Osum River, its towering castle, pretty patchwork of window frames and winding cobblestone streets helped it land a spot on the list of UNESCO World Heritage Sites. 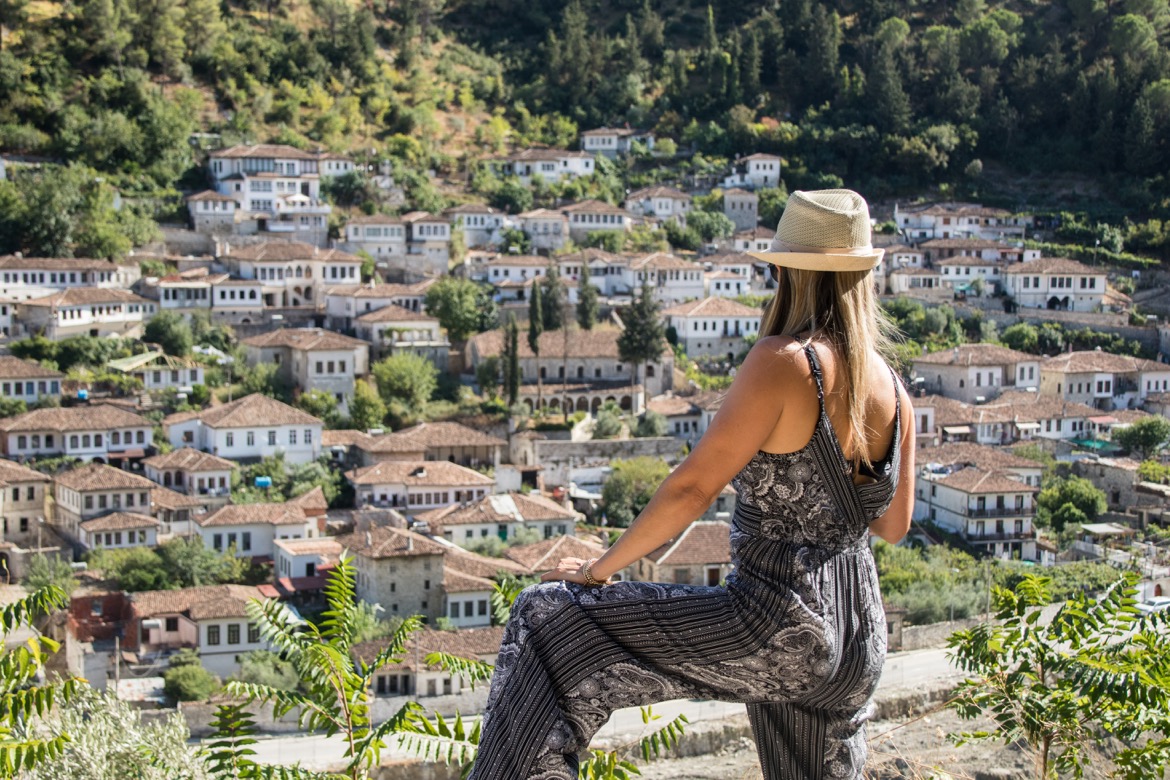 Dating back to the Ottoman era, Berat is located in the heart of the Berati region which is known for marble mining, olive groves and producing the famous Albanian alcohol raki. It also used to be an important European hub, since one of the original trade routes was only about 30 kilometres away.

As one of the main stops linking the capital Tirana with the southern, sun-soaked beaches of the Albanian Riviera, many travellers visit Berat at some point during their trip whether its for a quick day trip or a few days to explore the surrounding area which has spectacular natural attractions including deep canyons and gem-toned waterfalls. 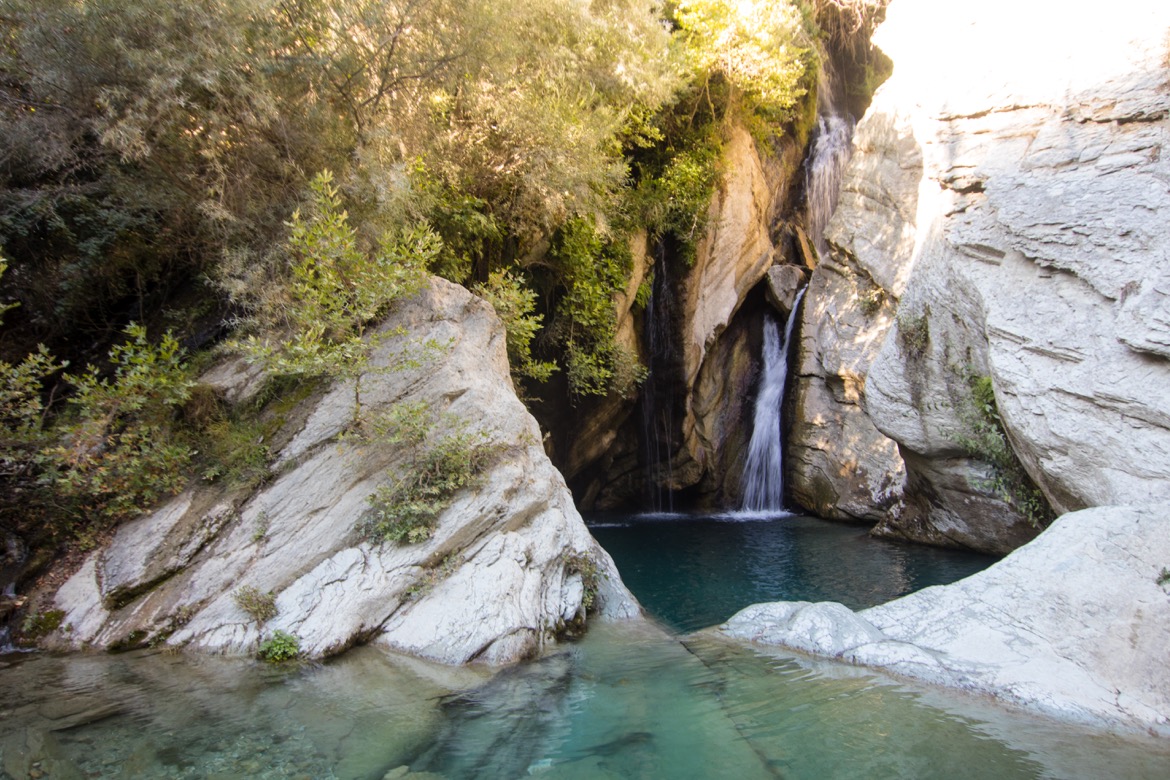 From hiking up to castles to wine tasting, here are five of the best things to do in Berat Albania. 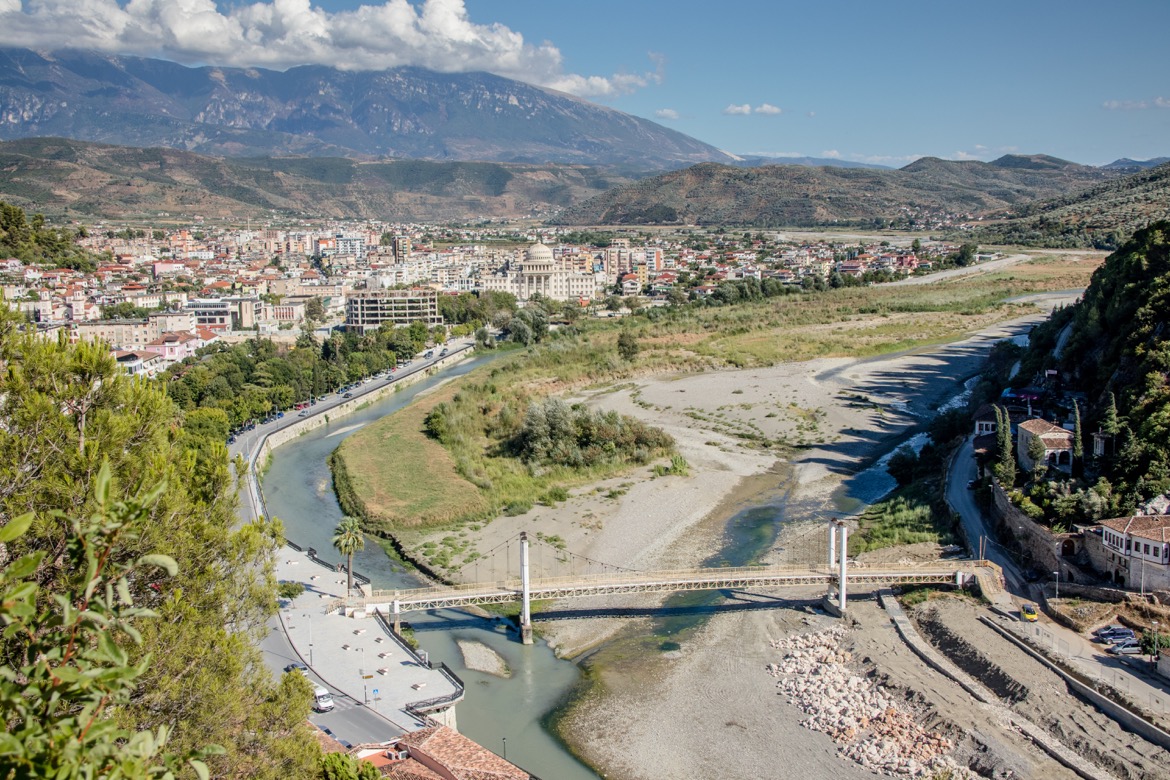 From a high viewpoint looking down, it’s easy to see how Berat got its nickname. The medieval old town of Berat is built into the hillside, with a collage of window frames all looking out toward the river and Byzantine fortifications. 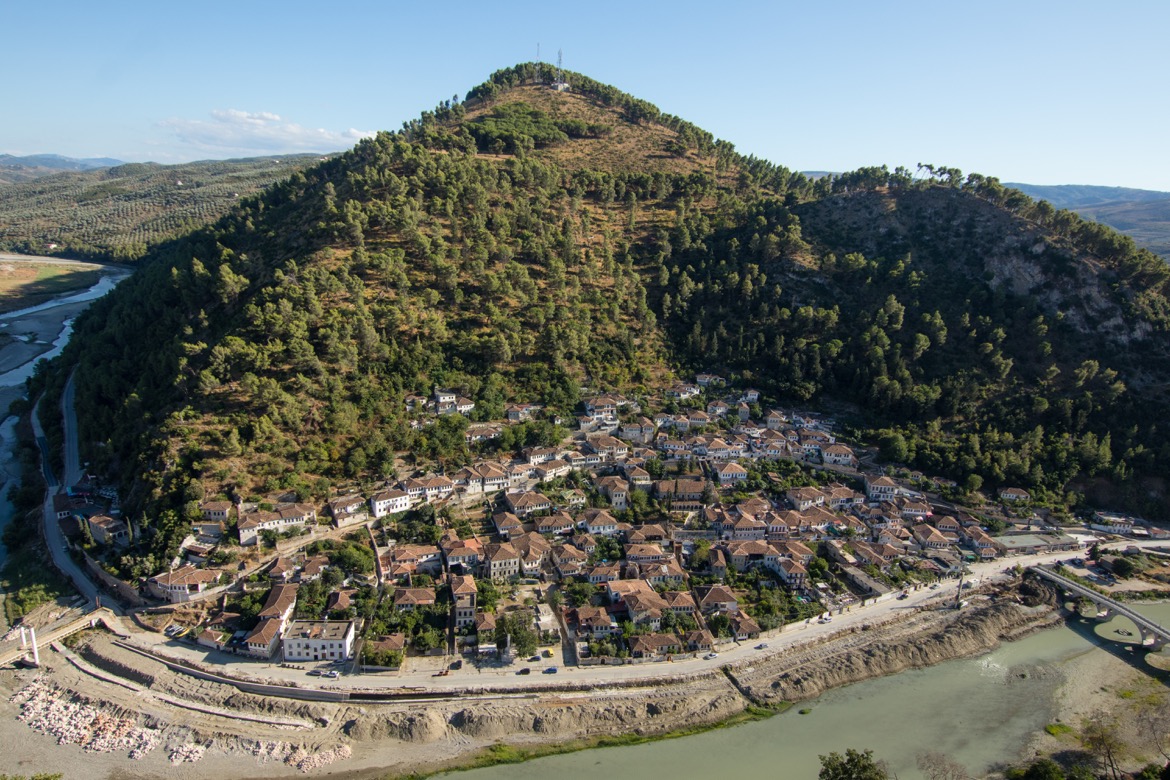 Surprisingly there are only a handful of restaurants and shops here; instead, it’s more like a quiet residential area perfect for wandering around and getting lost in the maze of cobblestone streets (be sure to wear good walking shoes, it’s hilly!). 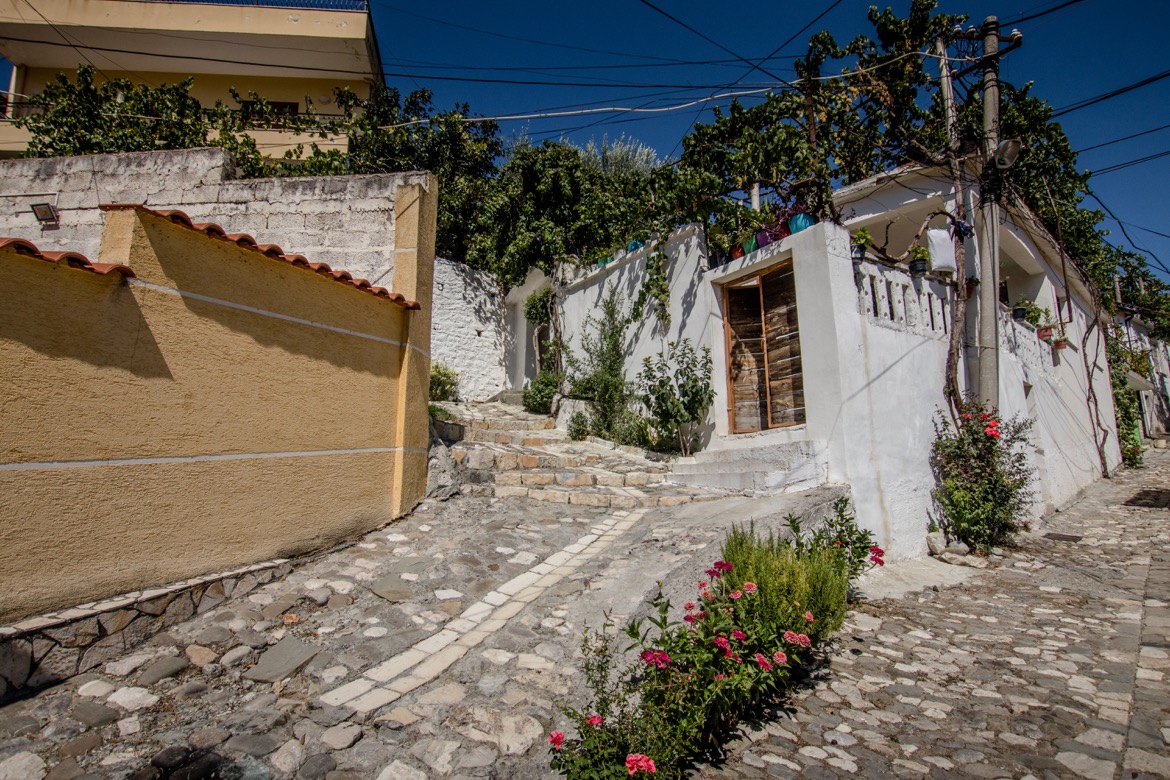 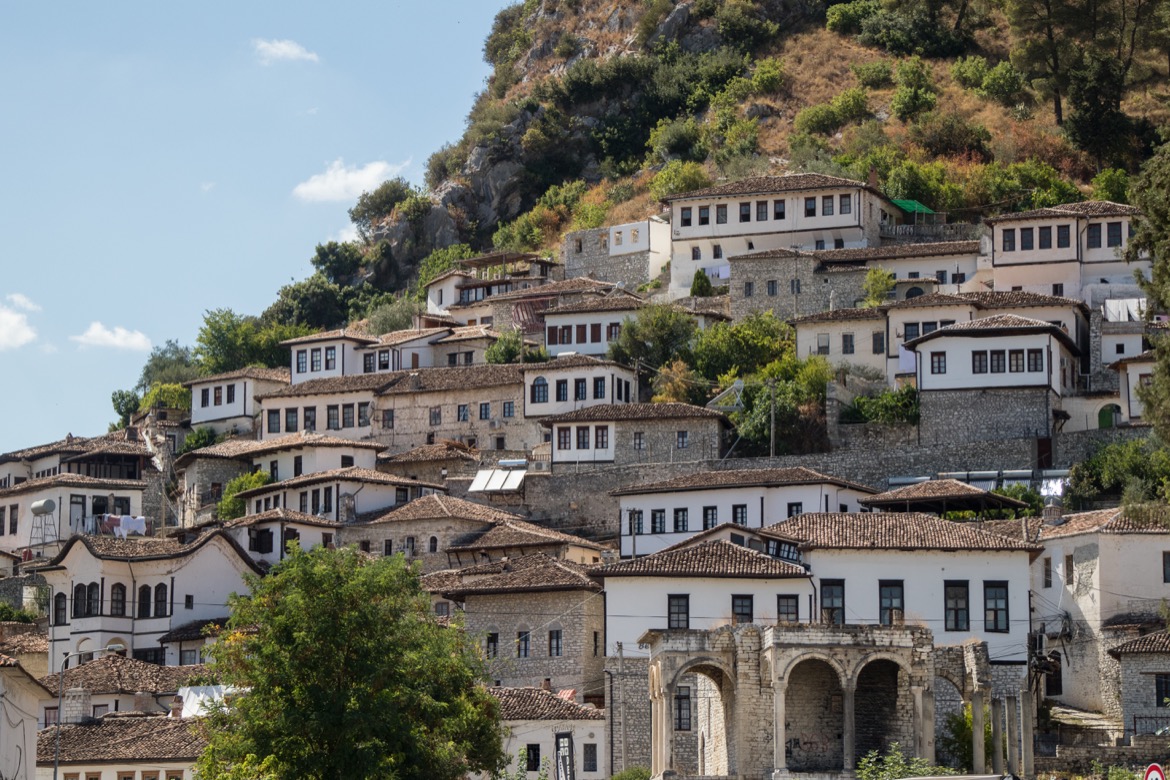 Keep an eye out for small plaques that adorn some of the notable structures, like the Leaden Mosque which dates back to the 16th century, and the Gate of the Pasha. 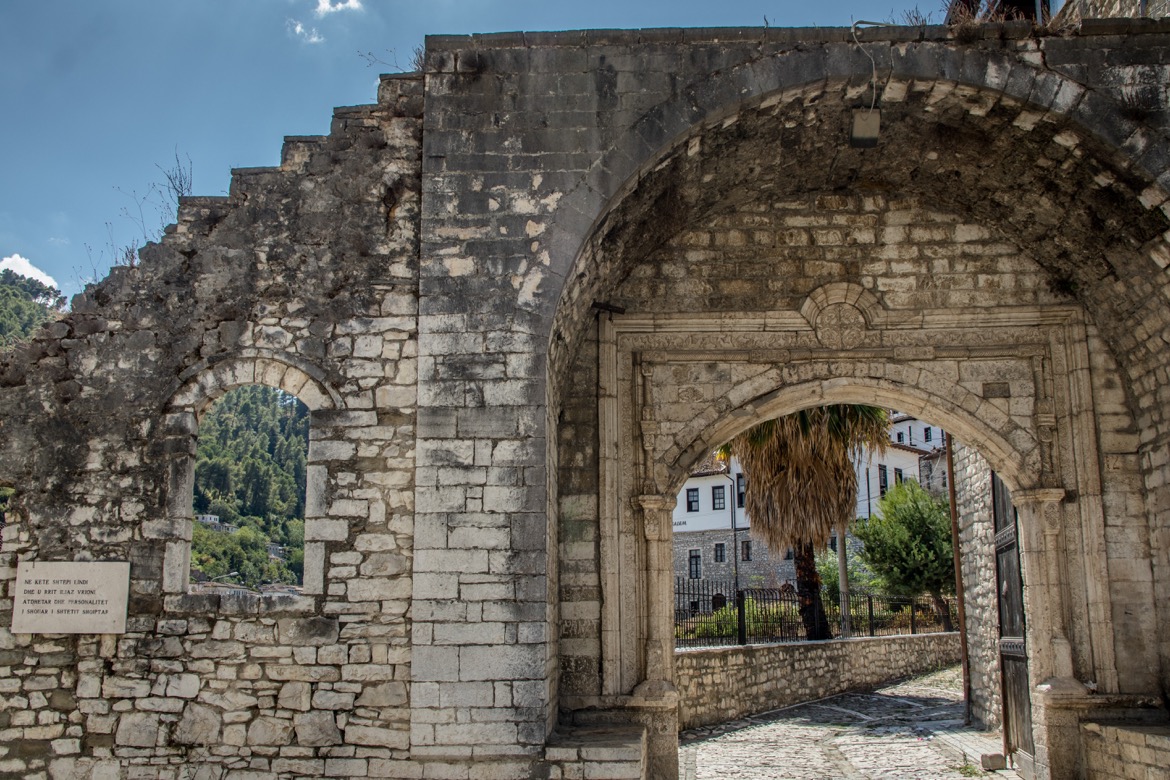 Gate of the Pasha 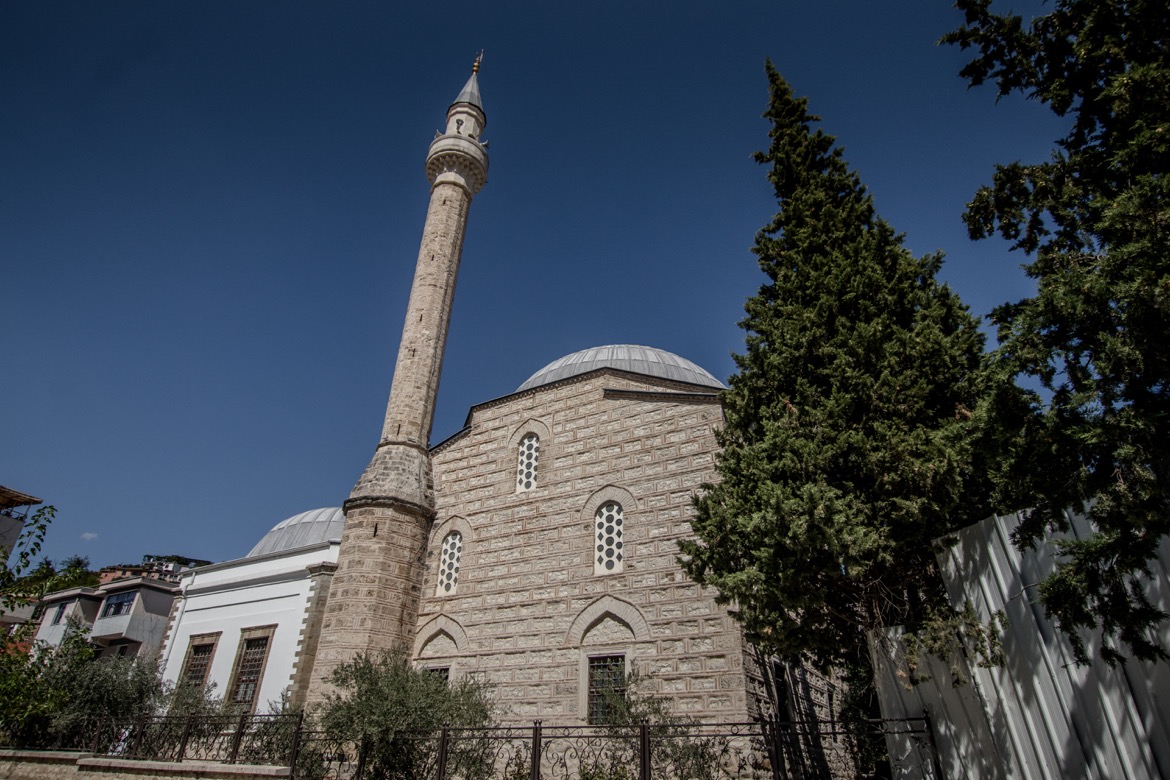 For a more lively atmosphere, take a stroll along Bulevardi Republika which is lined with cafes, bars, ice cream shops and restaurants. Situated along the river across from a leafy park, the pedestrian-only street is the busiest spot in town every night and perfect for people watching. 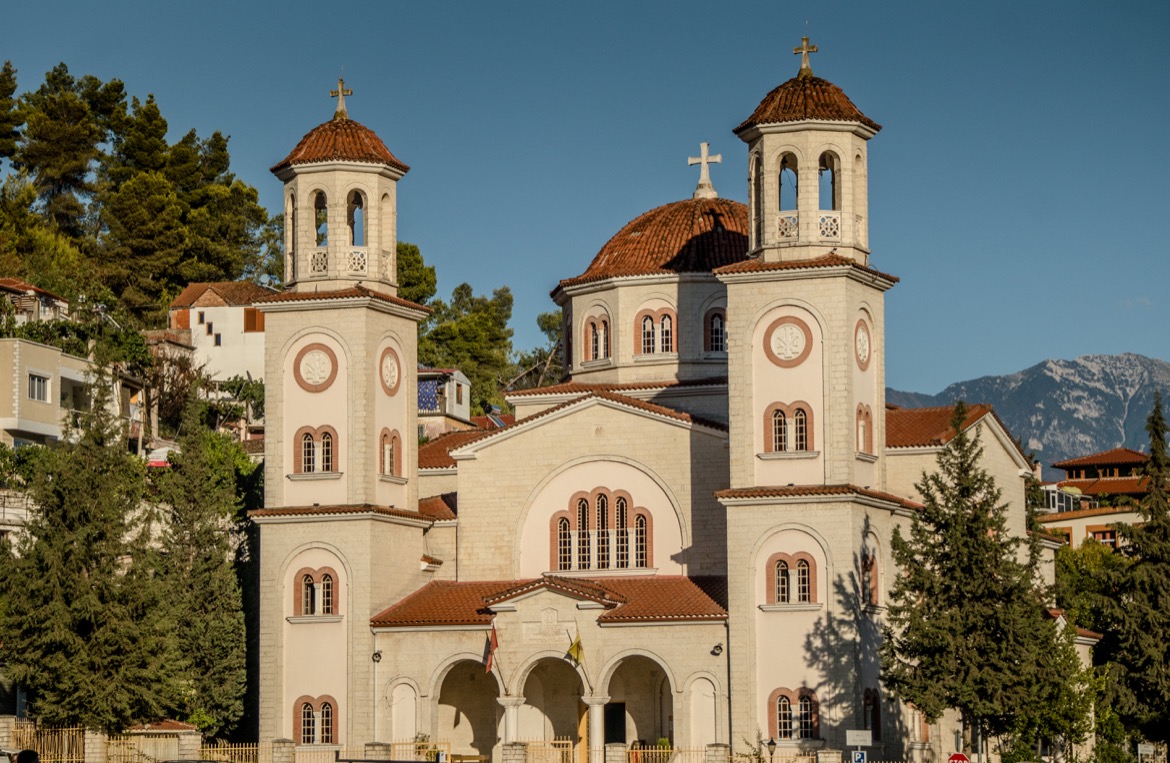 Hike up to Berat Castle

One of the top Berat attractions is Berat Castle, perched high on a hill overlooking the entire city. 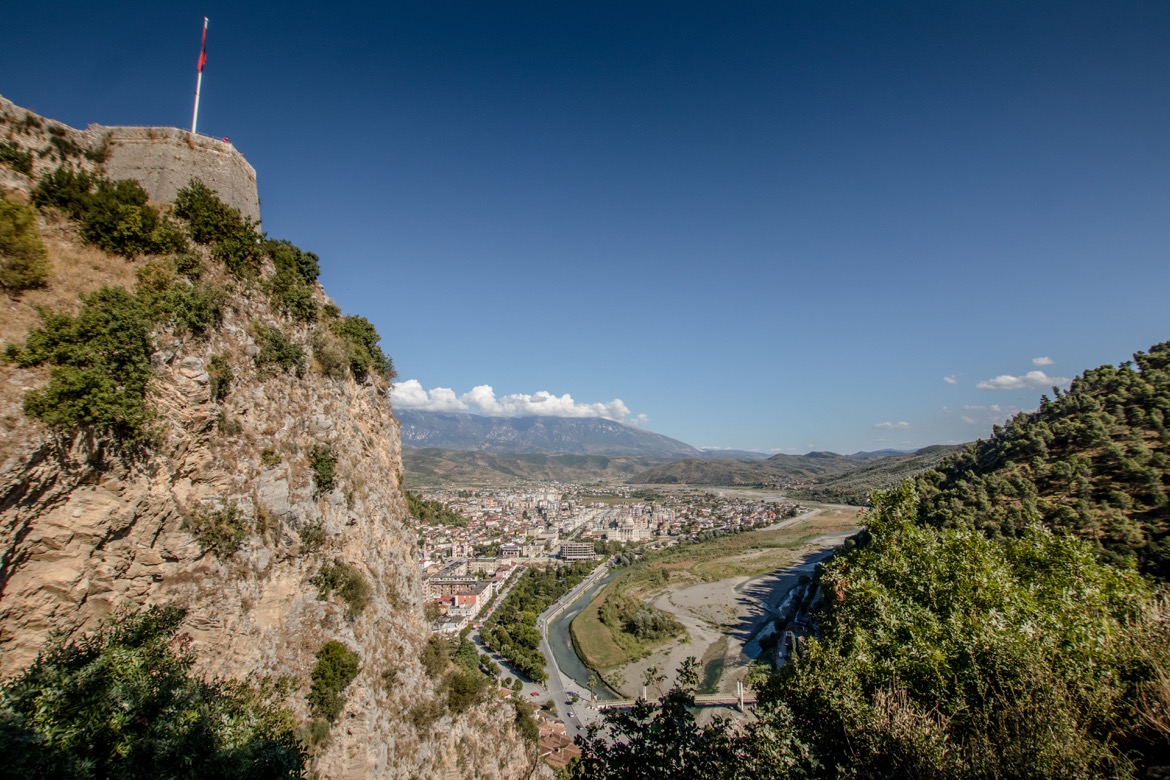 ‘Kalaja e Beratit’ was built in the 13th century, and is actually an entire complex with crumbling churches, Ottoman mosques and plenty of sweeping panoramic viewpoints. It’s the oldest building in Berat, and was once frequented by traders as it was a key hub between Europe, Asia and Africa.

At one point there were 44 churches and two mosques at Berat Castle, but due to wars and more recent destruction at the hands of the communist leader Enver Hoxha most have been reduced to rubble. Today, some of the ruins remain and there are also a handful of restaurants and shops at the top. 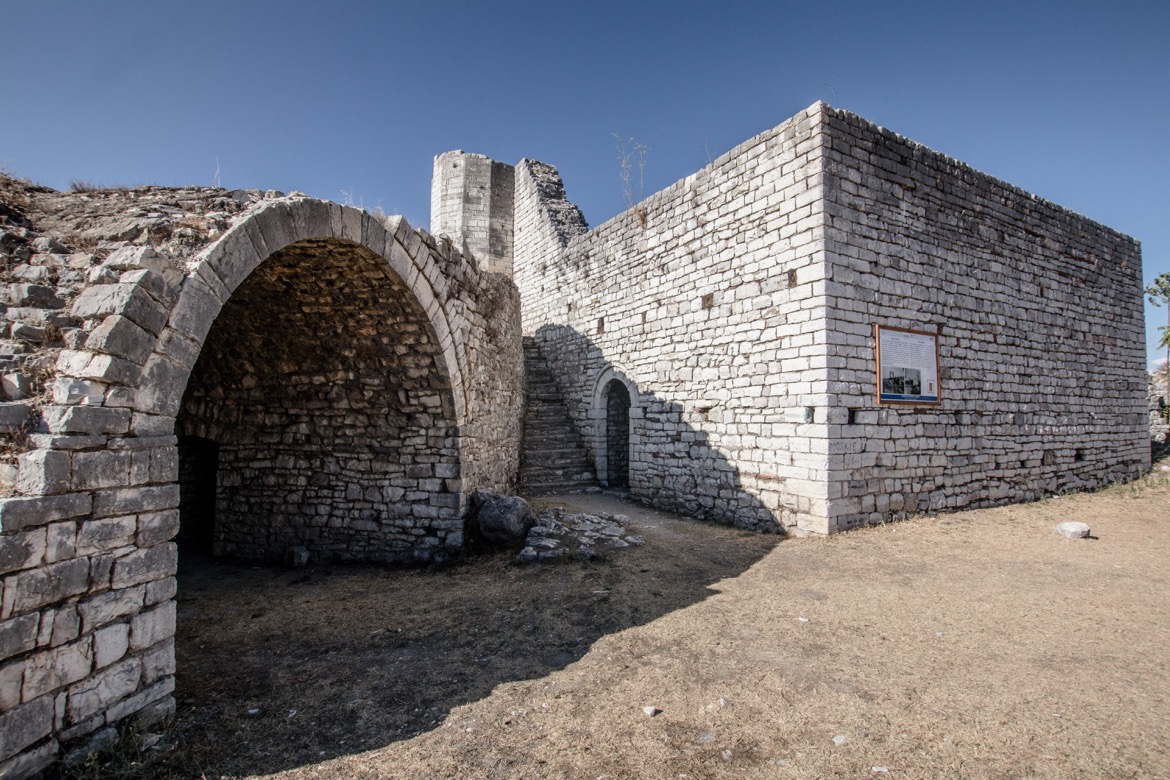 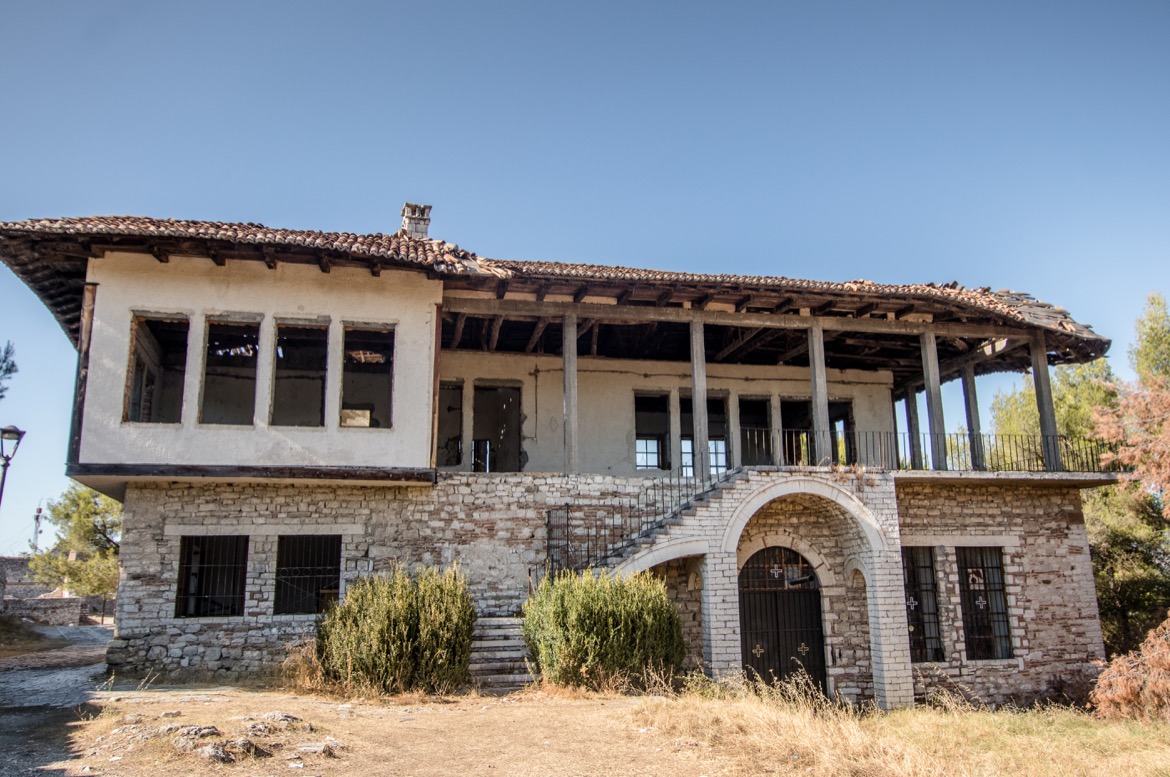 There are a few ways to get up to the castle; drive, follow the steep stone path up from the old town or take the somewhat harrowing hike up the back way, with the payoff being incredible views. 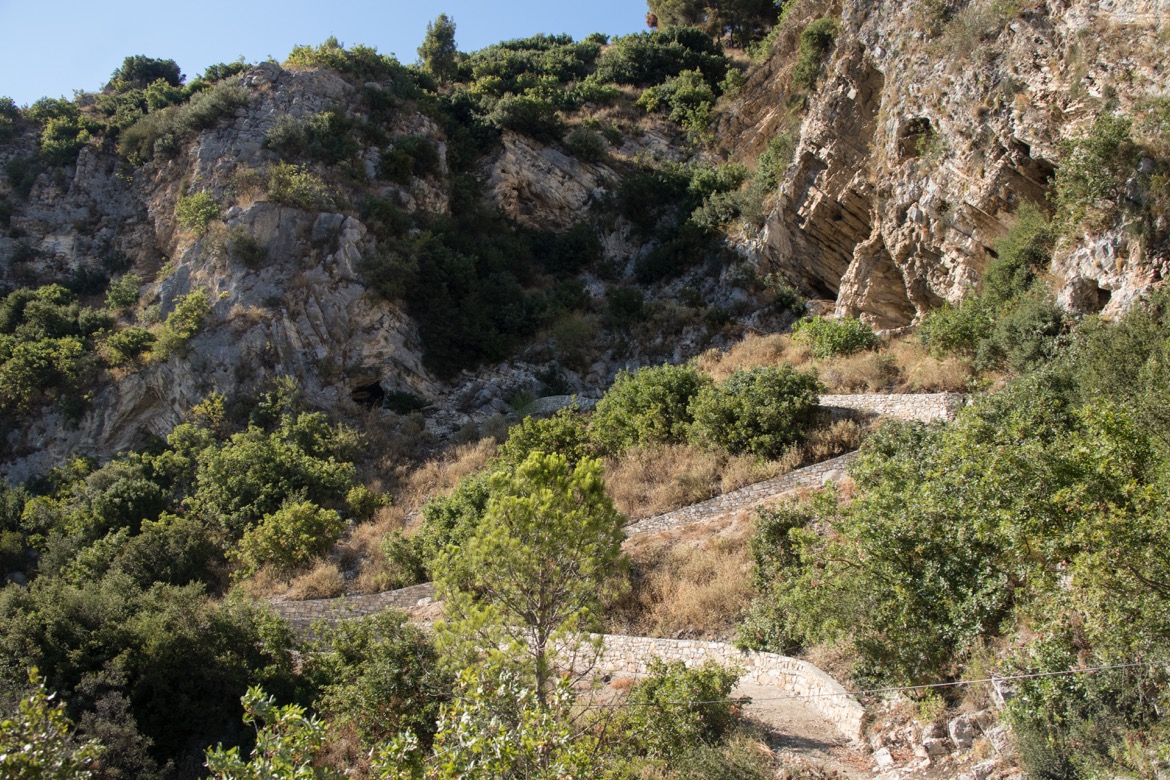 The trail up to Berat Casle

The trailhead starts from a small set of stairs on the north side of Rruga Antipatrea, between Gorica Bridge and the one near the Old Town. It only takes about 30 minutes to do the climb, and you’ll have a great vantage point of the houses and pass by St. Michael’s Church before entering the castle complex from the south end. 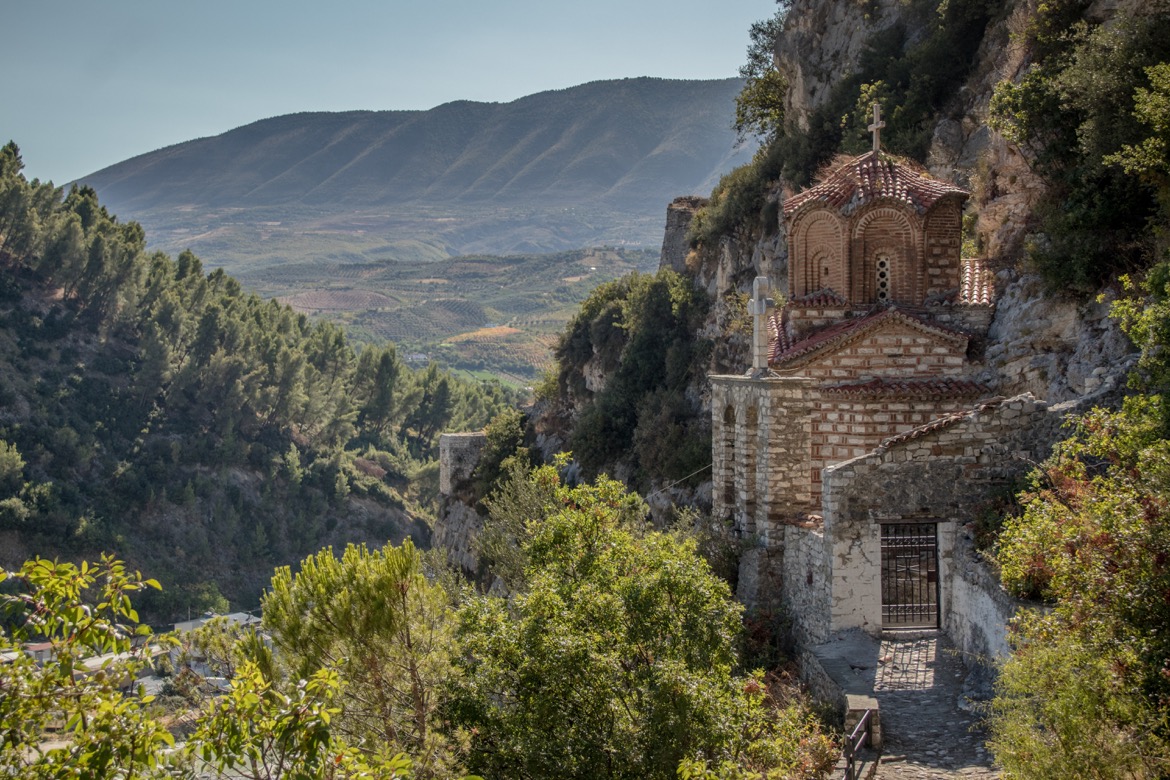 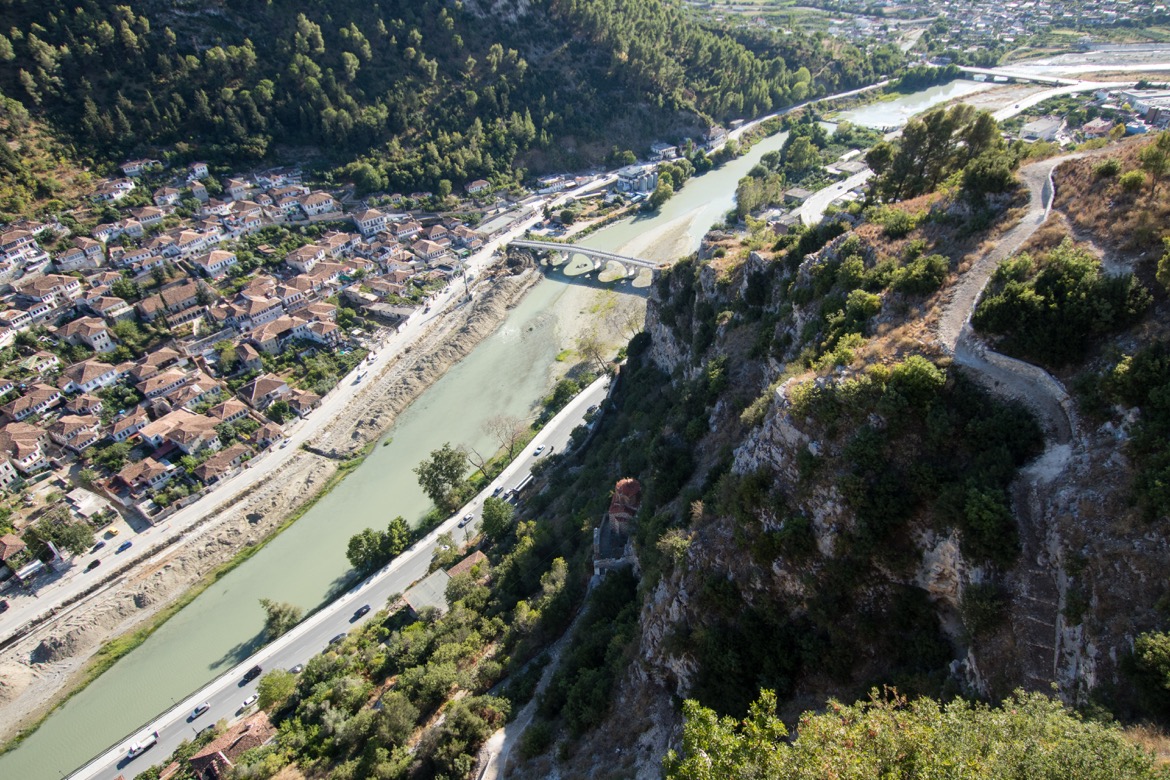 The view of Berat on the way up to the castle.

Adventure through the Osumi Canyon

One of the best day trips from Berat is the wild, wet adventure through the Osumi Canyon (also known as Osum Canyon, and pronounced ah-sue-me).

The ‘Grand Canyon of Albania’ is a 90 minute drive from Berat and boasts dramatic scenery, sweeping views of the Osumi Valley and thrilling activities on the water like rafting trips (except for during summer, as water levels are too low for the boats). 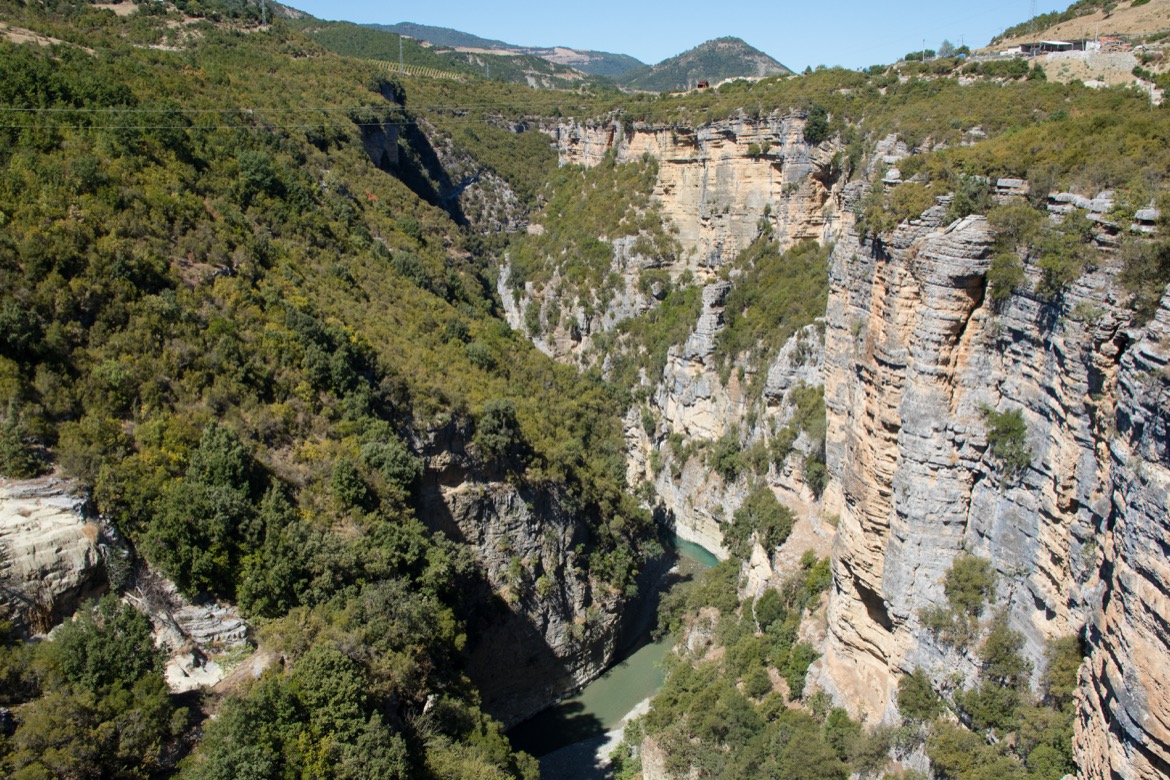 Visit Albania leads a fantastic Osumi Canyon tour that starts with a couple of sightseeing stops en route, then heads right to the base of the canyon. Guests slip into a swimsuit and watershoes, then set off on an hour long hike through the gorge that includes swimming right in the cool, azure water through the steep crevasses.

It’s an intense experience with unforgettable views that could easily be the highlight of your entire Albania trip. 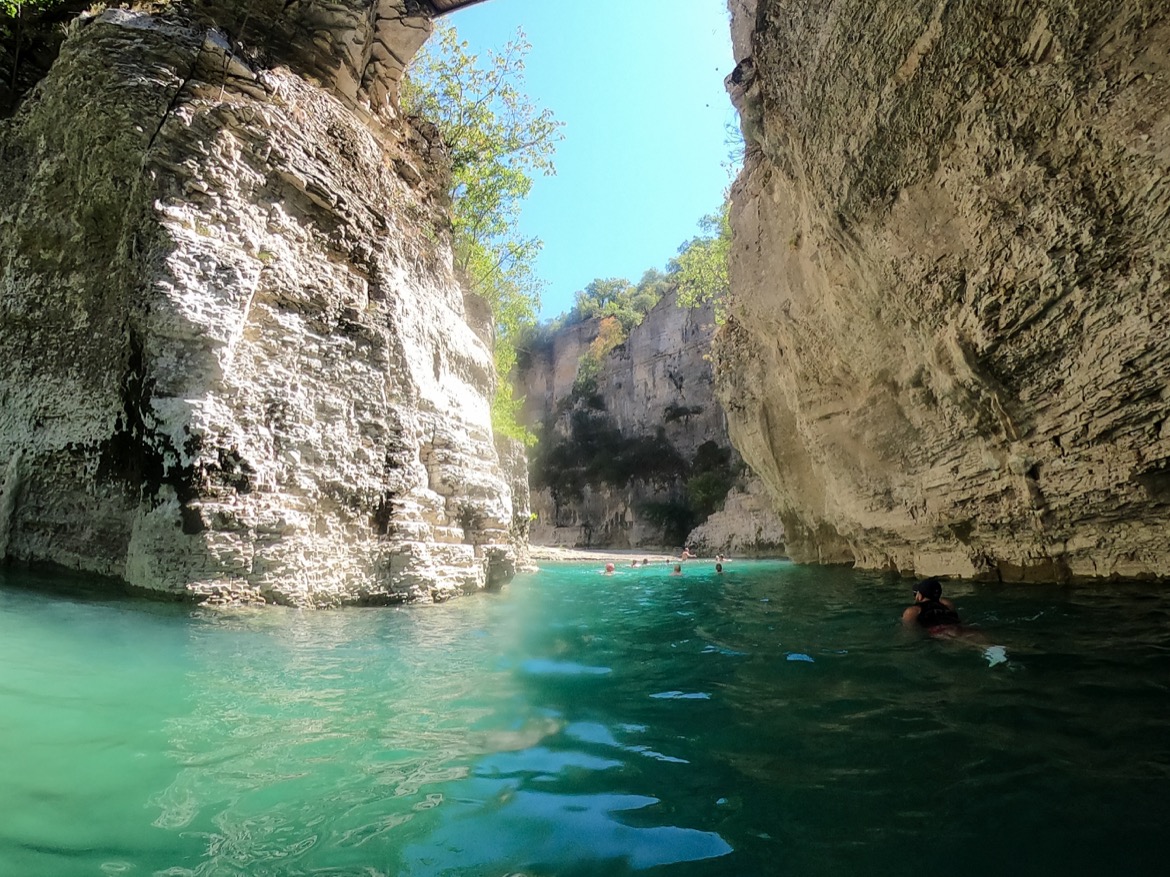 The tour costs about $50 per person and includes transfers, a guide, lunch and a hike to the Bogove Waterfall. Click here to book 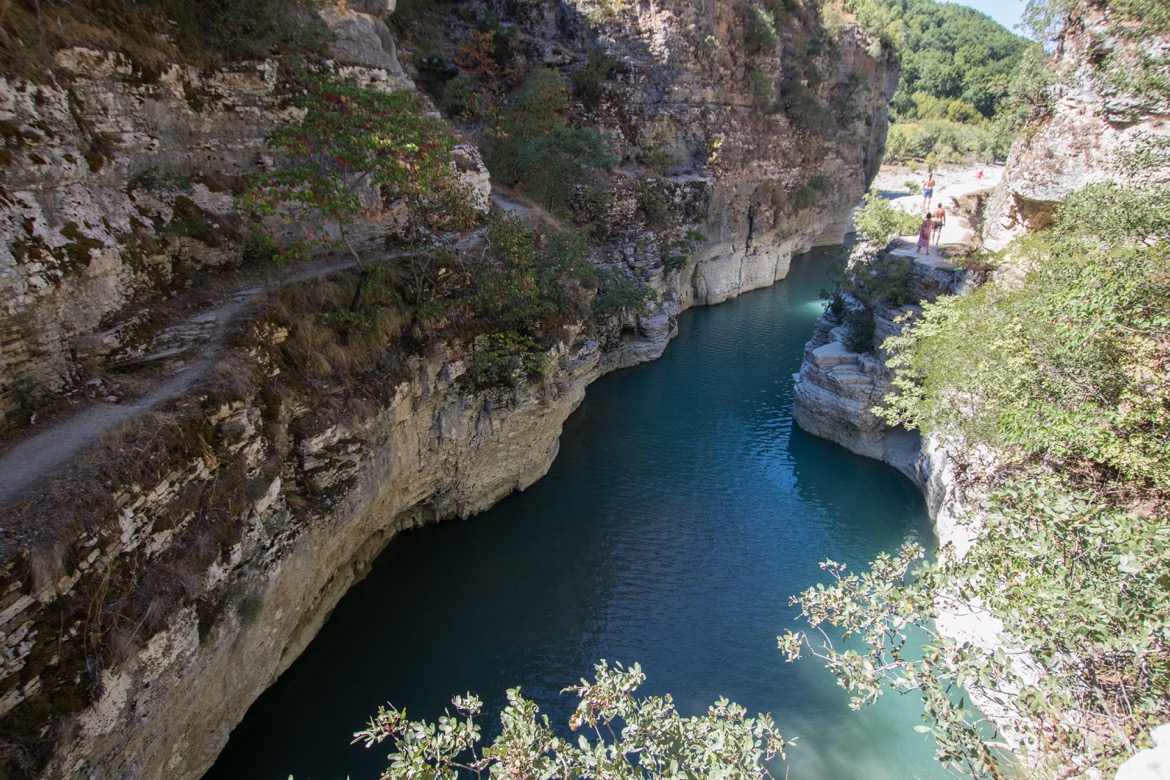 Swim under the Bogove waterfall

On the way back to Berat, most groups make a stop at the Bogove waterfall which is absolutely gorgeous…and painfully cold. At just six degrees celsius, it makes for a frigid swim that’s also an unforgettable way to beat the summer heat. 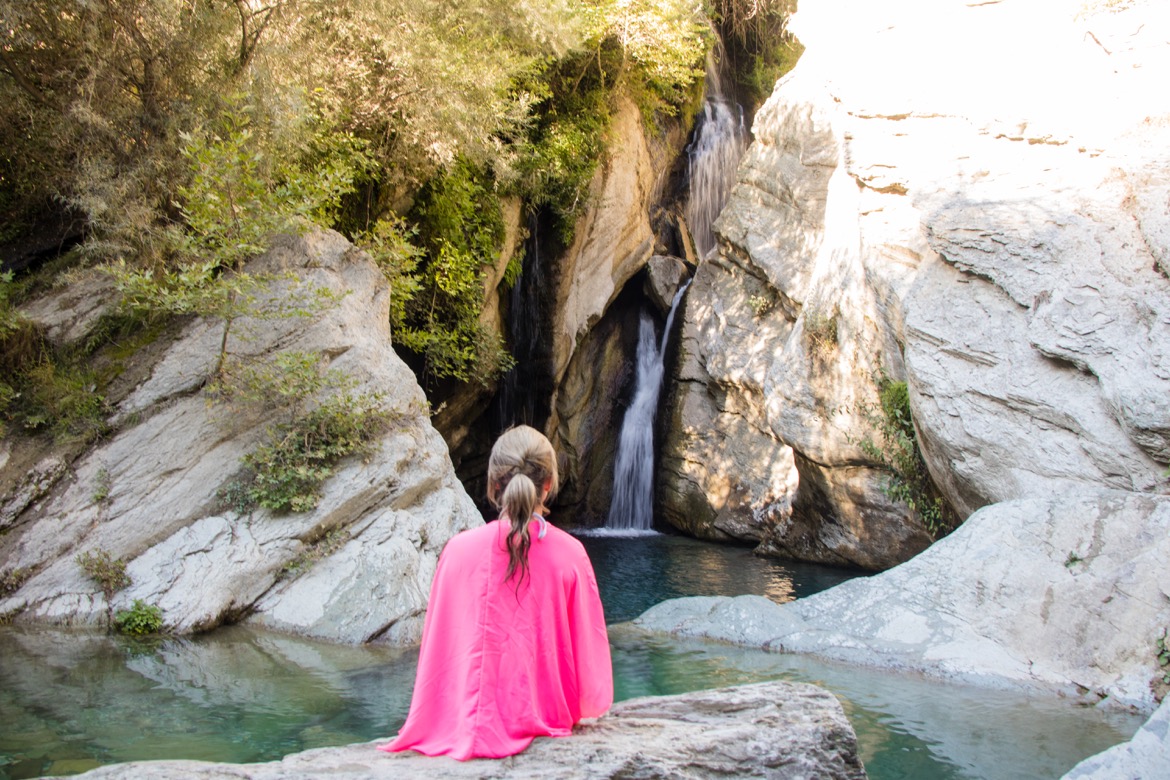 It takes about 20 minutes to hike through Tomorri Mountain National Park down a dusty, somewhat hazardous pathway where the ‘bridges’ leave something to be desired. The effort is well worth it when you make it to the breathtaking falls, which are tucked away in a cluster of sandstone rocks and cascade into a turquoise pool.

While Albanian wine isn’t exactly sweeping up the awards, it’s still worth visiting the vineyards near Berat.

One of them is found about half an hour east of Berat in Roshnik, which is known for its landscape of rolling hills dotted with olive groves. Alpeta Winery has been making wine and raki since the 90s, and offers tours and wine tastings on their property which has fabulous views of Tomorro Mountain. Click here to book 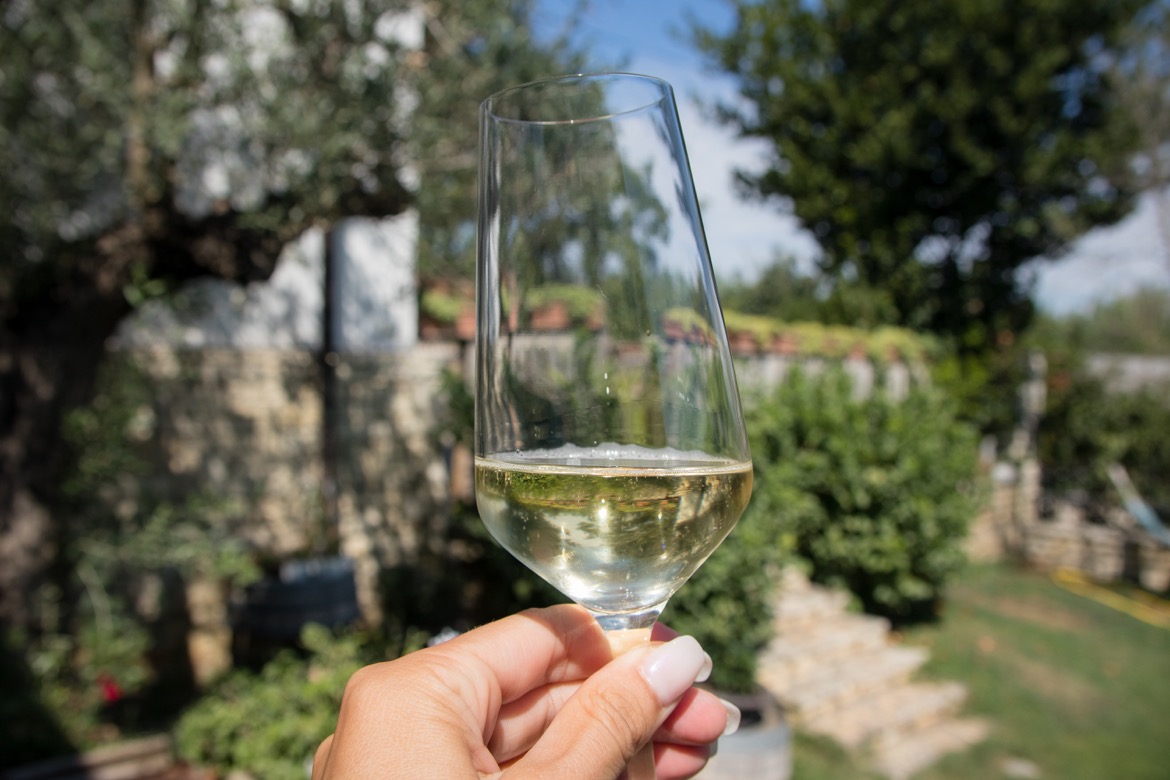 Another option is Çobo Winery, which makes a great pit stop on the way to Gjirokaster. This family-run operation secretly made their wine and raki during the communist rule, left to Italy and eventually came back and planted the first vines in 1993. Their tasting room opened five years later, which was the first one in Albania. 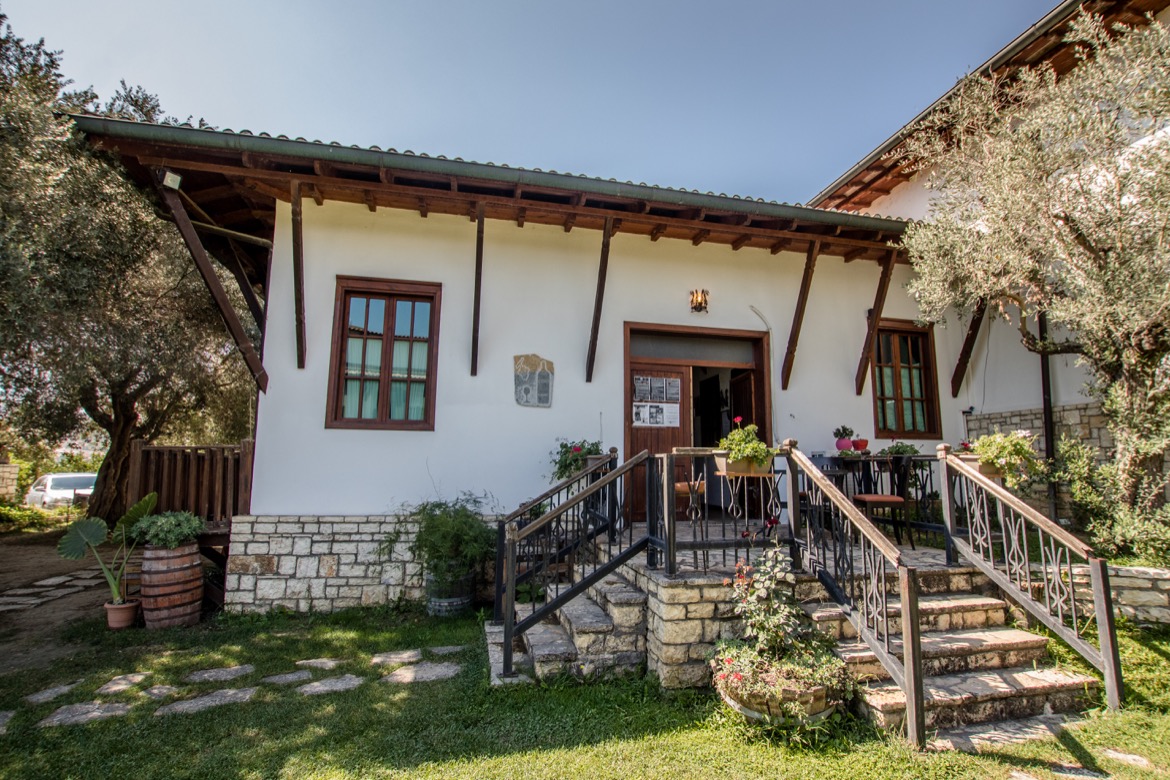 A highlight is the serene outdoor area where guests can sip on varietals made from local grapes like shesh, vlosh and puls, and Çobo is also the only winery in Albania that produces sparkling wine. 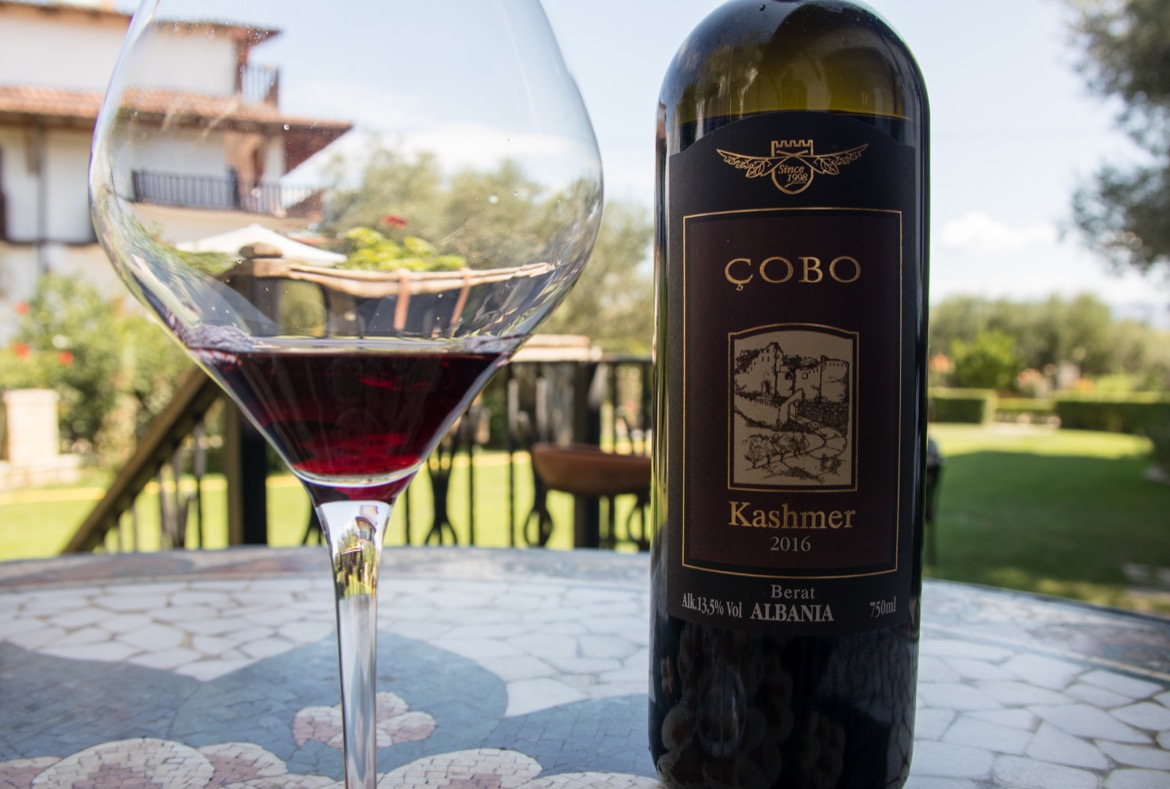 How to get to Berat

The most budget friendly option for getting to Berat from Tirana is by hopping on one of the local buses that departs from the main bus terminal. They usually leave every half hour throughout the day, and there’s a sign on each bus with its final destination. Simply hop on, and someone will come around eventually to collect the fare. The ride takes 2-3 hours, and costs 400 lek (about $3.50). 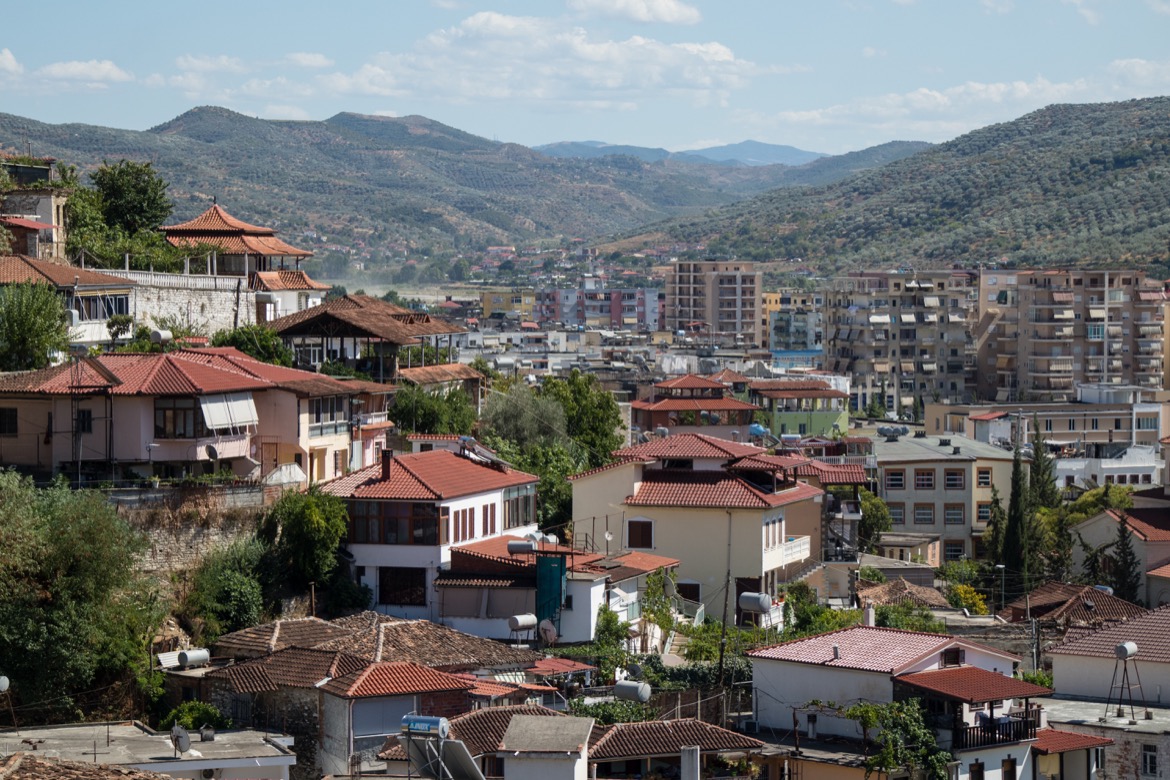 There are also buses linking Berat with Saranda and Gjirokaster, but they’re less frequent so be sure to check the times before heading to the terminal.

The bus terminal in Berat is actually a few kilometres outside the city centre, so from there you’ll either hop on a city bus (which costs about 25 cents) for the quick drive in or hop in a taxi.

Thanks to its compact size, Berat is very easy to explore on foot without a guide. However, if you’re just visiting for the day or en route to southern Albania, here are a few options for guided tours to help make the most of your time:

Aside from Osumi Canyon and the wineries, there are a few other fun day trips from Berat including touring the archaeological park of Apollonia and the Ardenica Monastery, or exploring Pirogoshi Cave:

Albania is a budget friendly destination, and the same goes for Berat hotels. One of the best places to stay is Hotel Republika Berat, which has large, clean rooms, friendly staff and a perfect location in the middle of the city. Click here to book

Another top ranked option is Hotel Rezidenca Desaret, which has a great spot near the walkway up to Berat Castle, views of the Gorica and Mangalemi boroughs and an excellent restaurant. Click here to book 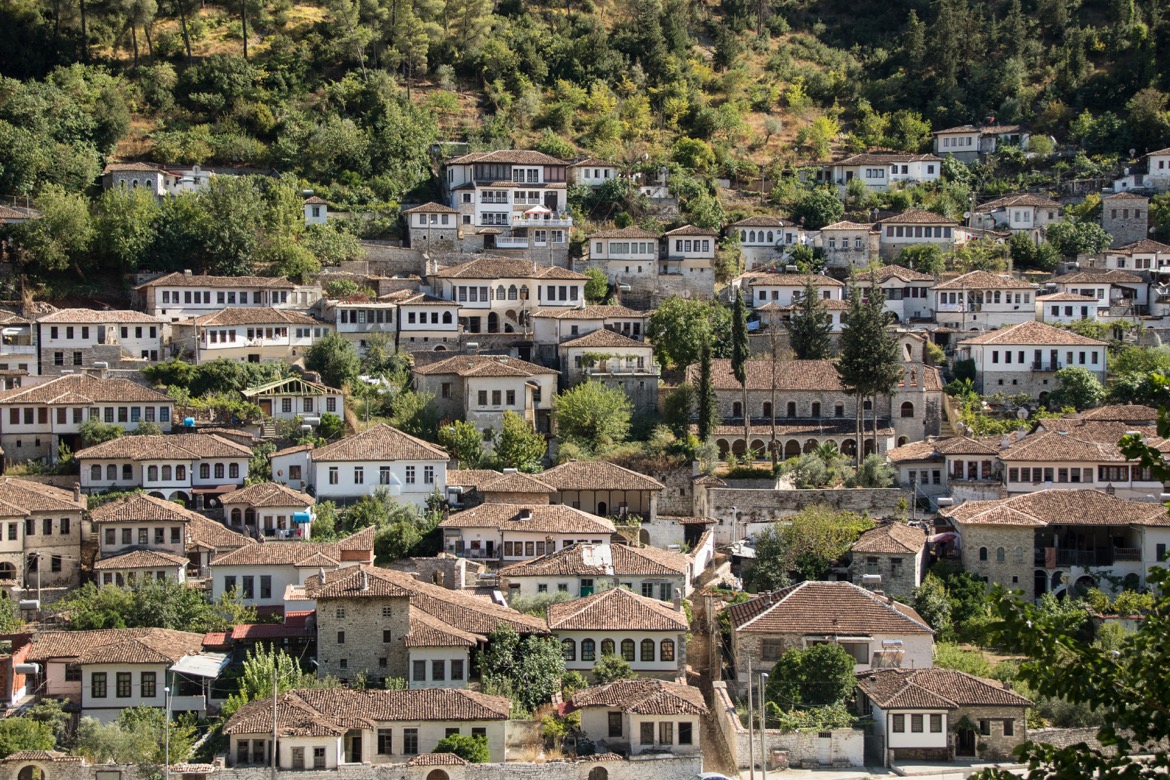 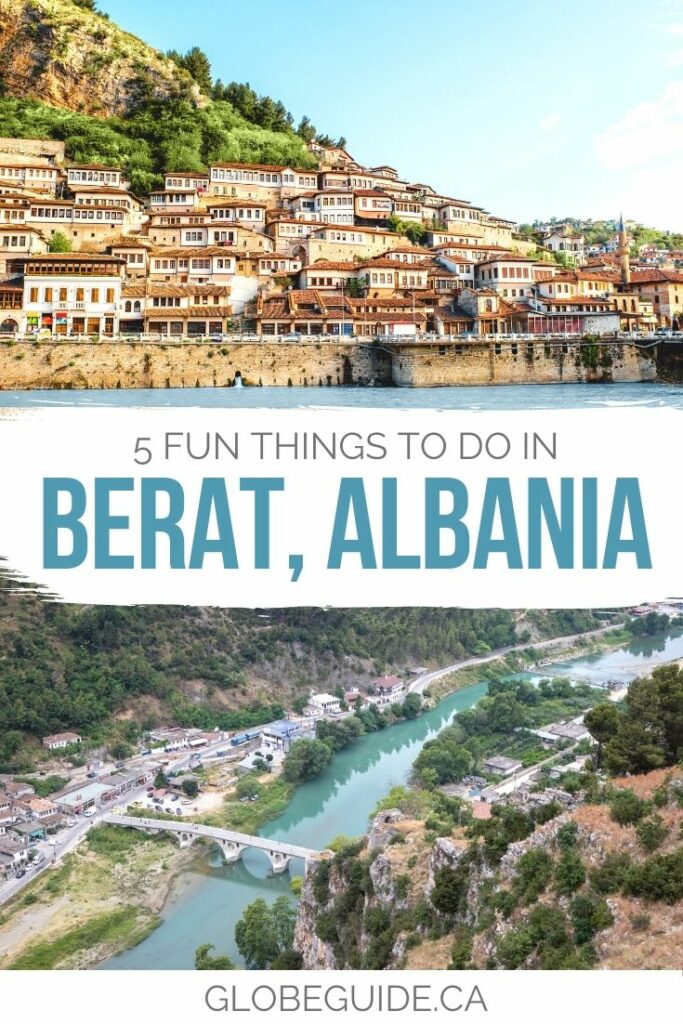 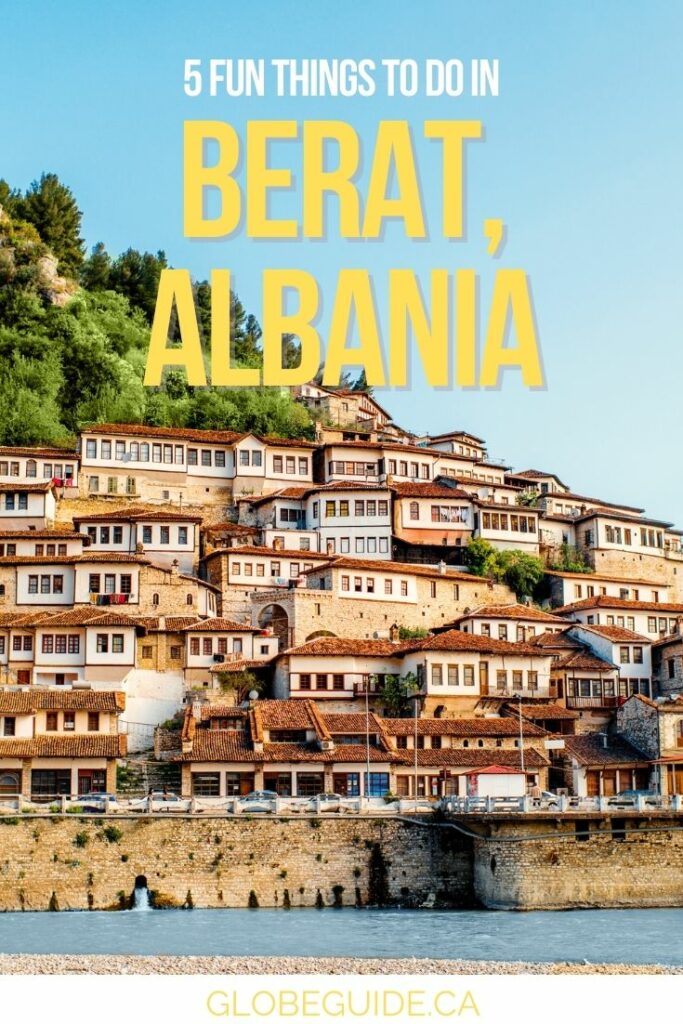 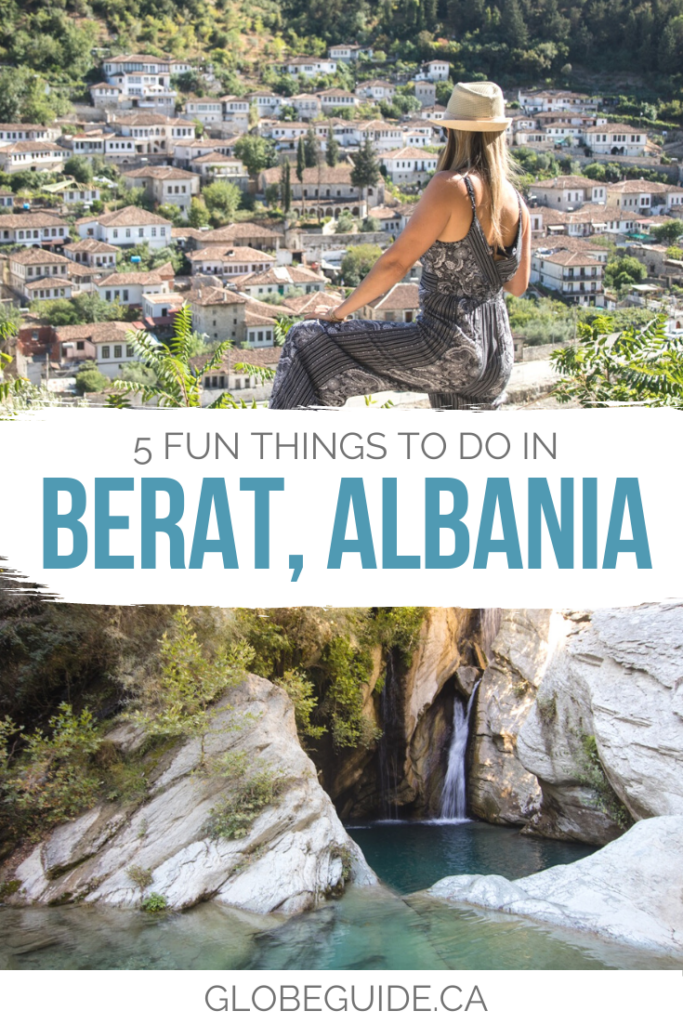