The best things to do in Kuching, Borneo 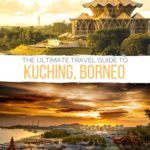 If you’ve got Borneo on the brain, chances are you’ll end up in Kuching, Malaysia at some point during your trip. As one of the largest cities on the island, the capital of Sarawak has plenty to see, including incredible architecture, serene gardens and a vibrant Chinatown. 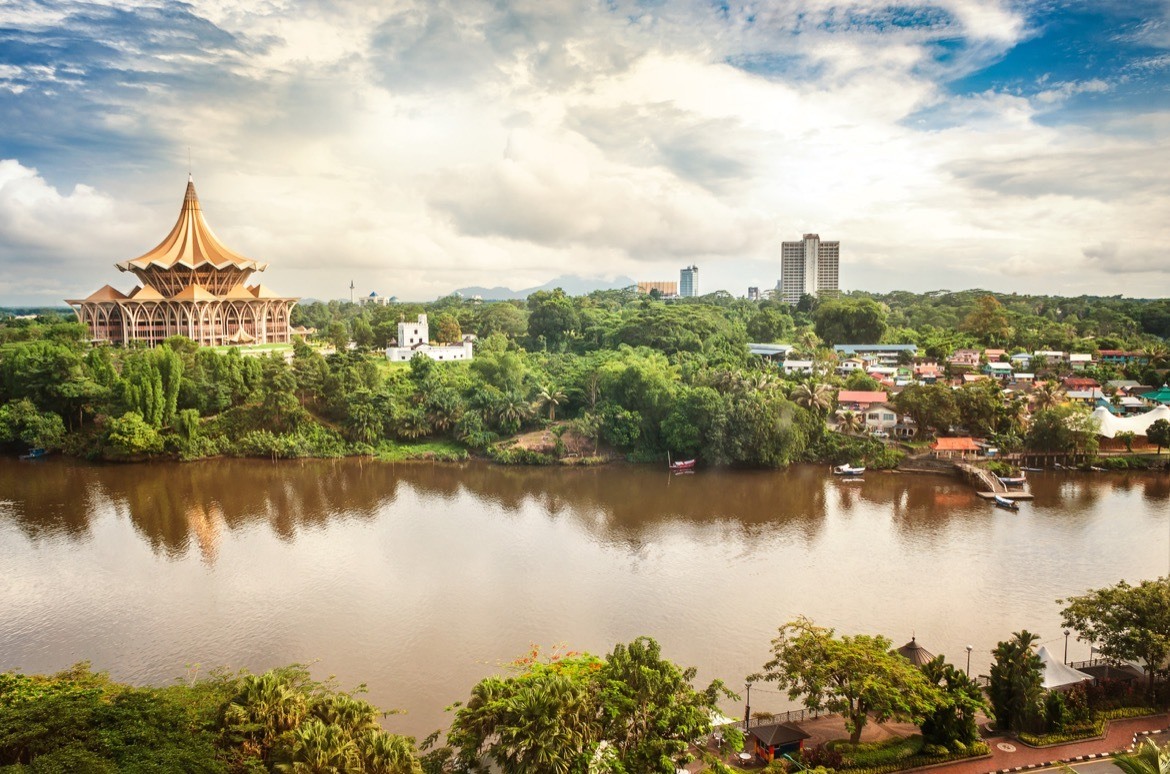 It also makes a great base for exploring the fantastic natural areas nearby, like lush rainforests, orangutan sanctuaries, stunning beaches and snorkeling spots.

Here are the best things to do in Kuching, the ‘Cat City.’ 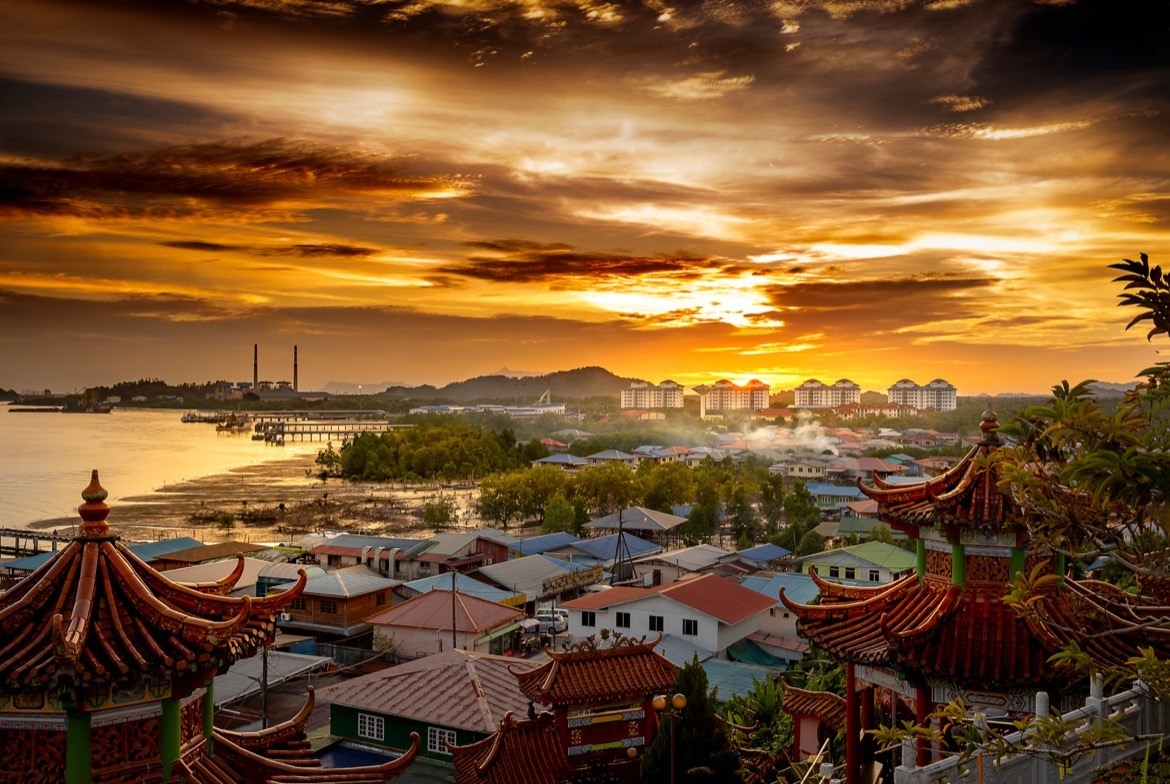 The impressive Dewan Undangan Negeri is truly one of a kind, and has become a fixture in the city since its completion in 2009. Serving as the assembly building, this photogenic spot was built for conducting state business but soon became one of the most interesting places in Kuching thanks to its unique architectural stylings. 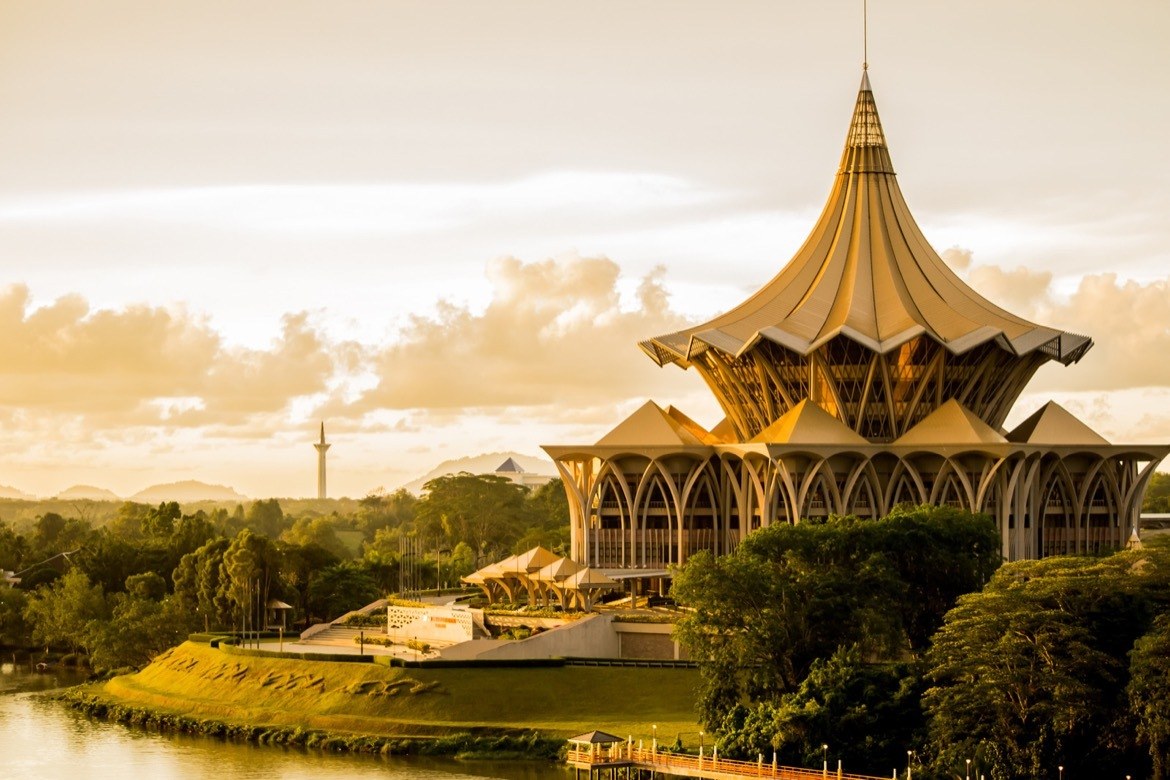 At only nine stories high it may not seem like much, but when you see it in person it’s incredible how grand it seems, making the people standing below look like tiny ants. While the site is not currently open for tours, visitors are free to walk around the grounds. Truth be told, you don’t have to get that close to it for a good look: instead, head down to the waterfront, and snap away!

It’s particularly stunning in the evening when the bright lights cast a reflection into the river, which makes a photo session here one of the best things to do in Kuching at night. Book a city tour 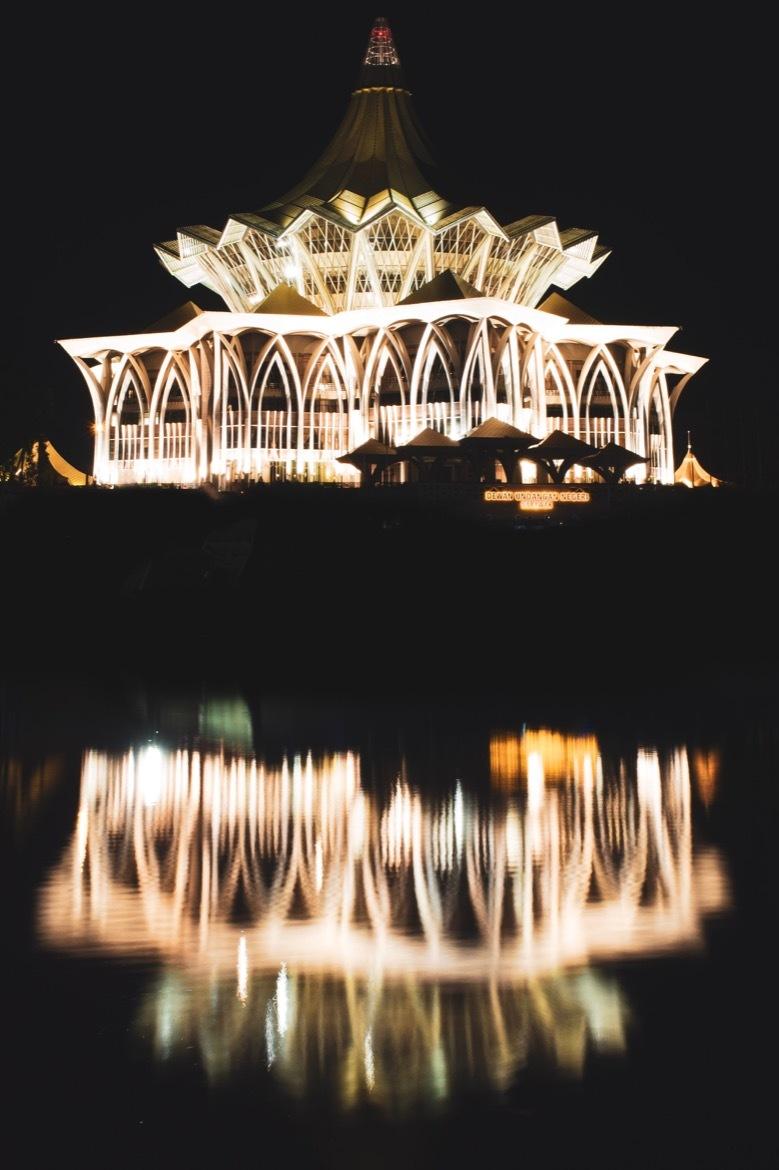 The Kuching cat museum and statues

The name Kuching is believed to have come from the Malay word for cat which is kucing, and the city lives up to its reputation of having plenty of feline fanatics.

Cat-crazed attractions include statues of the pets waving from roundabouts, in the middle of parks, and spray painted on the side of buildings as street art. Oh, and there’s even an entire Cat Museum which houses a collection of sculptures, pictures and poems dedicated to the (sometimes) cuddly creatures, making it one of the best things to do in Kuching with kids…unless, of course, you consider yourself a dog person. 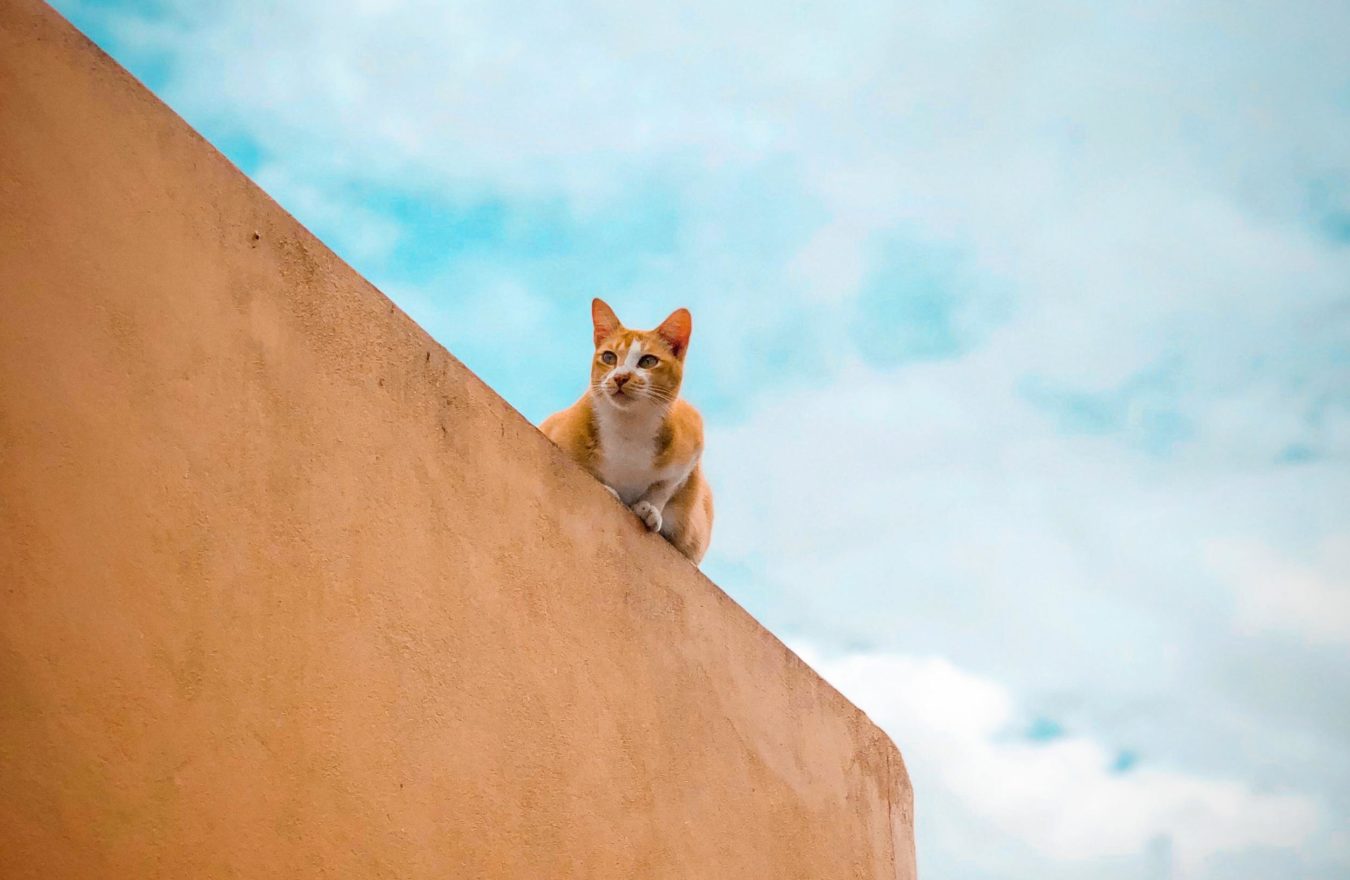 The Kuching City Mosque (State Mosque of Sarawak) is like a pink, pastel palace, and its rose facade is best seen from the Sarawak River. Also known as ‘Masjid Lama’ (Old Mosque), it was built in 1968 and its striking architecture makes it a must-see when you visit Kuching. While visitors are welcome inside, they are asked to dress respectfully and only Muslims are permitted during prayer times.

The city has a strong Chinese influence, so it’s no surprise that Chinatown is one of the most popular places to visit in Kuching. Highlights along Carpenter Street include the Harmony Arch and the Hiang Thian Siang Temple, which dates back to the 19th century and is one of the top Kuching attractions. A bit further down is the Hong San Si Temple which features a rooftop decorated with ornate dragons, and is part of the Kuching Heritage Trail since it dates back to 1848.

Tip: If you’re craving Chinese food this area is one of the best places to eat in Kuching! 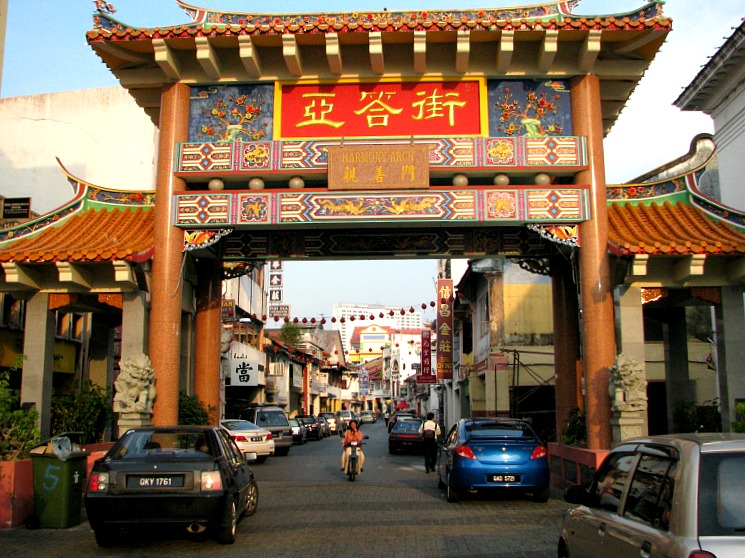 The city is situated on the banks of the Sarawak River, and walking along the waterfront boardwalk is the best place in Kuching to get a feel for what life is like around here, especially at night when locals are out and the sound of sizzling food stalls and bustling restaurants make for a lively ambiance.

You can also hop in one of the small boats and cross to the other side to explore another hawker centre and get a different vantage point of the city. 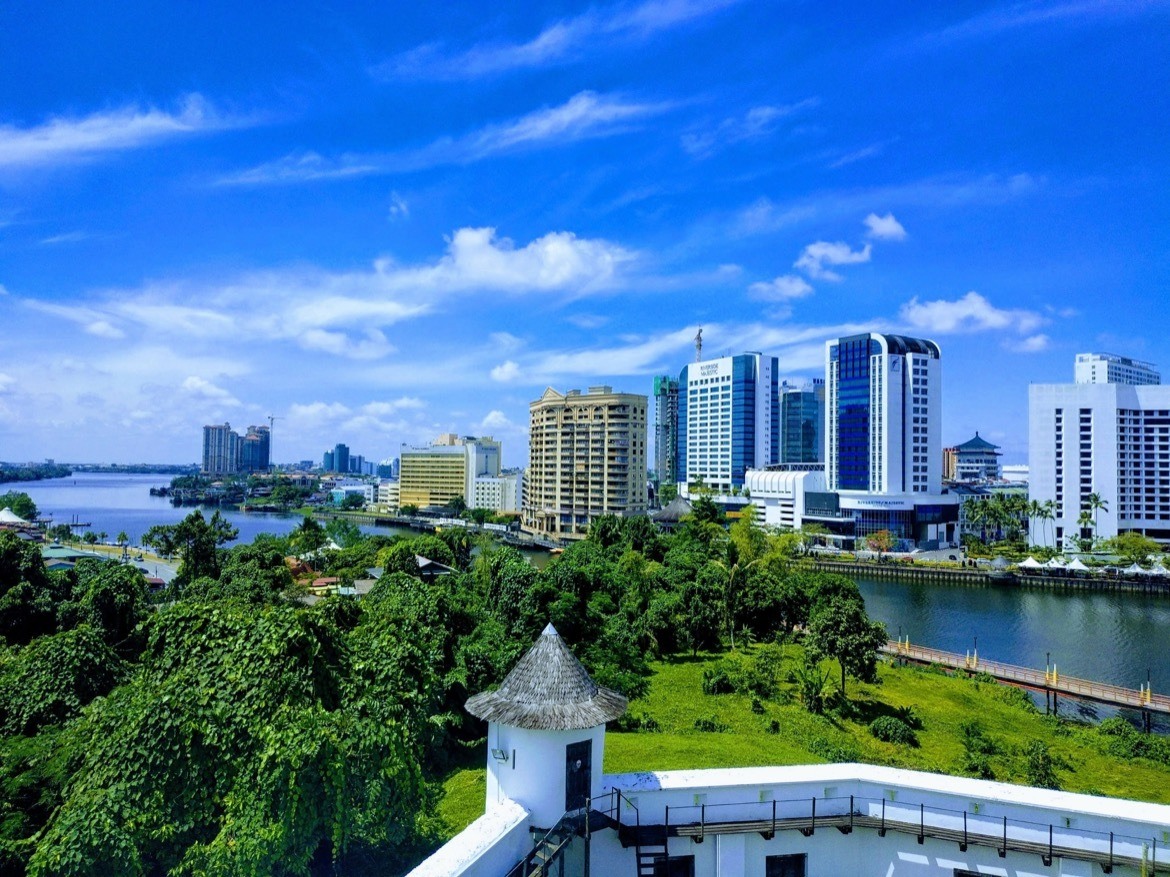 Taman Sahabat, the Malaysia-China friendship park, is a wonderful place to take a timeout from hectic city life and get back to nature. The large space hosts beautiful pavilions, a koi pond, gardens and statues—including a couple of kitty cats (no surprise there!).

Visitors can relax among the bright tropical flowers or check out the huge monument to China’s Admiral Zheng Ho. Taman Sahabat is one of the best free things to do in Kuching, and is also a popular spot for wedding pictures so if you time it right you might get to see a couple of newlyweds! 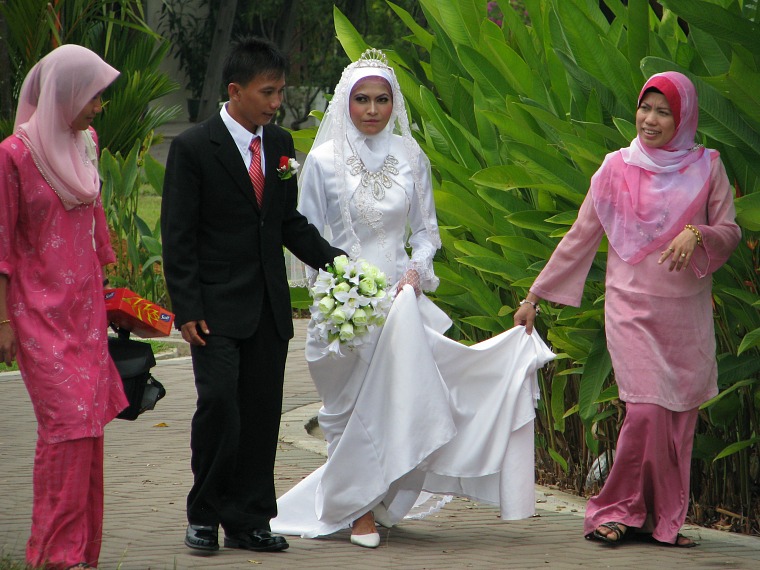 Where to eat in Kuching at night

Kuching is home to Malays, Indians, Ibans and Chinese people, which makes for some creative cuisine. Whether you duck into one of the tiny restaurants or head to the open air markets which are usually the best place to eat in Kuching, you’ll get to enjoy an incredible fusion meal for as little as $3 including a beer. 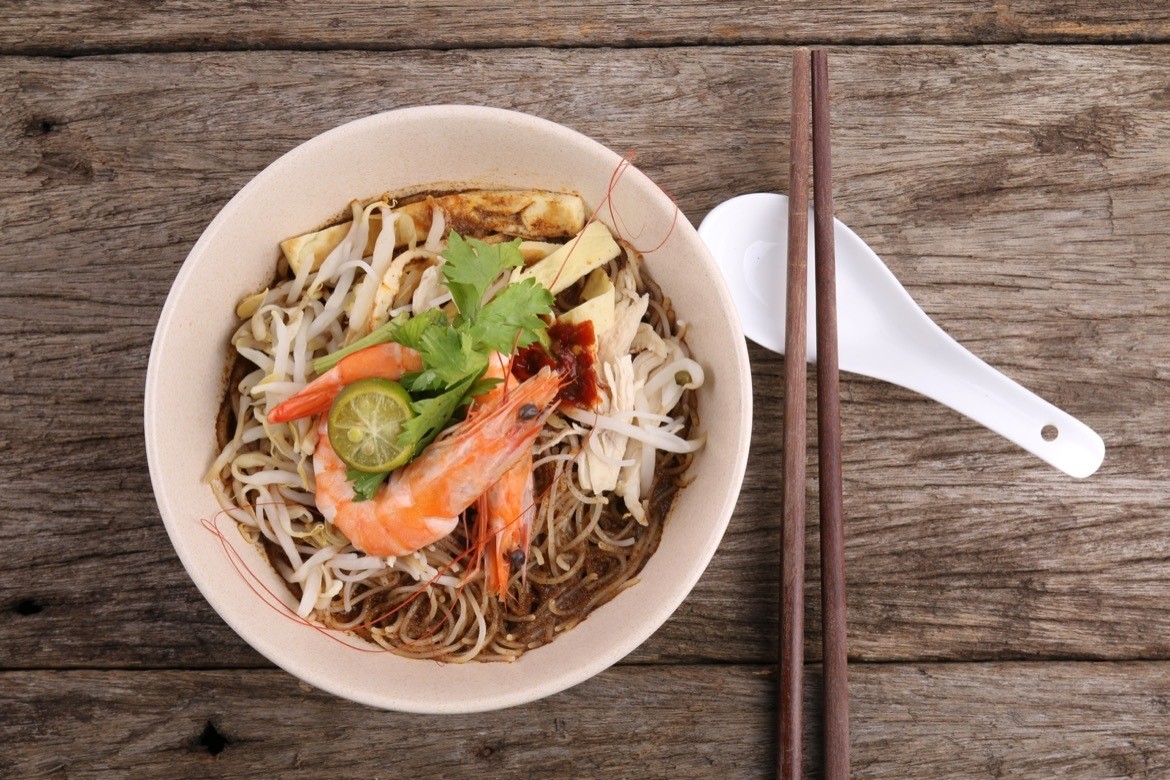 The city also has great dim sum, which is basically Cantonese food prepared in bite-sized portions, like appetizers. Go for brunch and prepare to be dazzled—even if you don’t exactly know what you’re eating. Some of the local’s favourite best food in Kuching includes:

There are some fantastic Sarawak tourist attractions near the city which will you give you some insight into Malay culture, as well as natural areas like beaches and lush jungles. Here are a few one-day excursions to include on your Kuching itinerary (which you can read more details about in this Borneo travel guide): 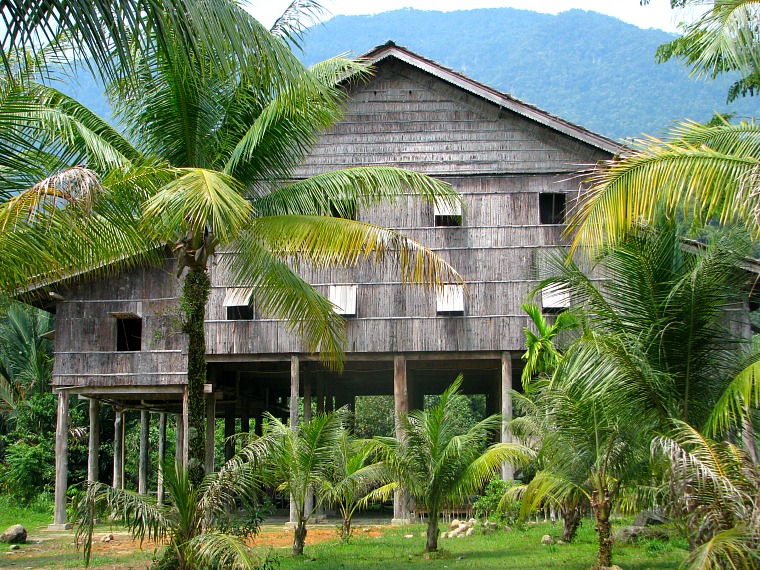 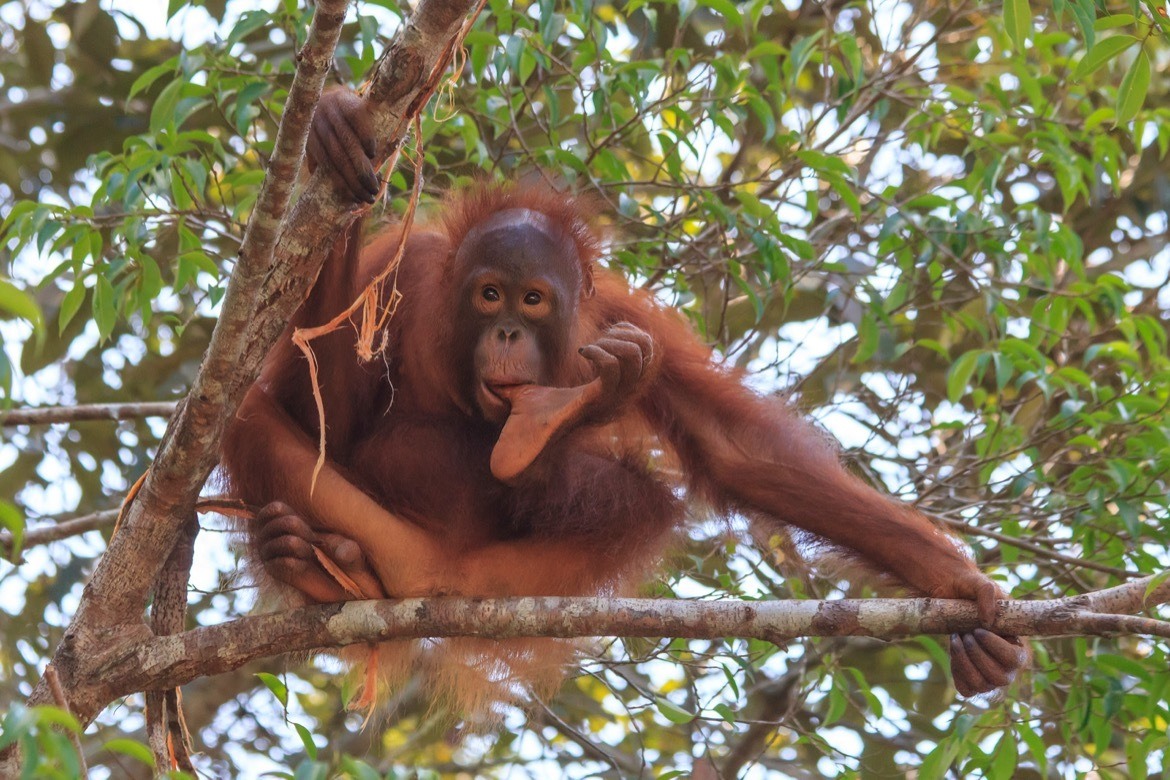 An orangutan in Borneo

Practicalities for sightseeing in Kuching

How to get to Kuching: Kuching International Airport has flights that connect traveller with Brunei and Kota Kinabalu, as well as around Kuala Lumpur on the mainland. There are also international flights available from places like Hong Kong and Singapore.

Alternatively, travel to Kuching by bus. The service between Kuching and Pontianak, Indonesia takes about 10 hours, and buses also travel to Bandar Sri Begawan, Brunei daily.

Where to stay in Kuching 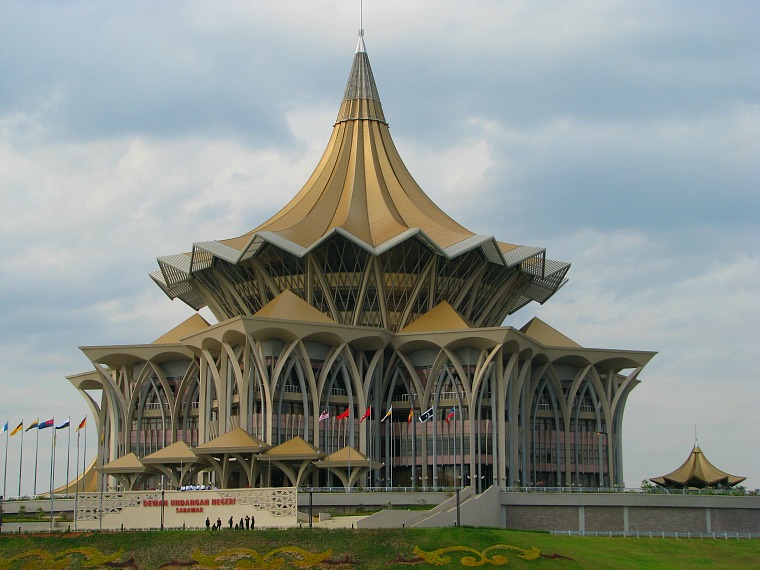 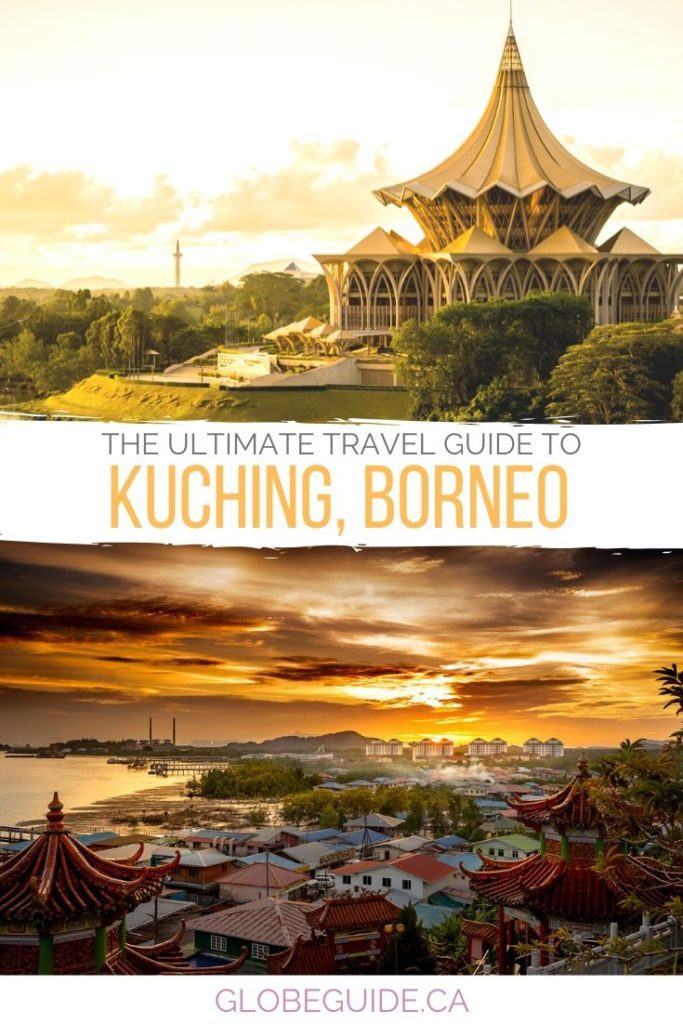 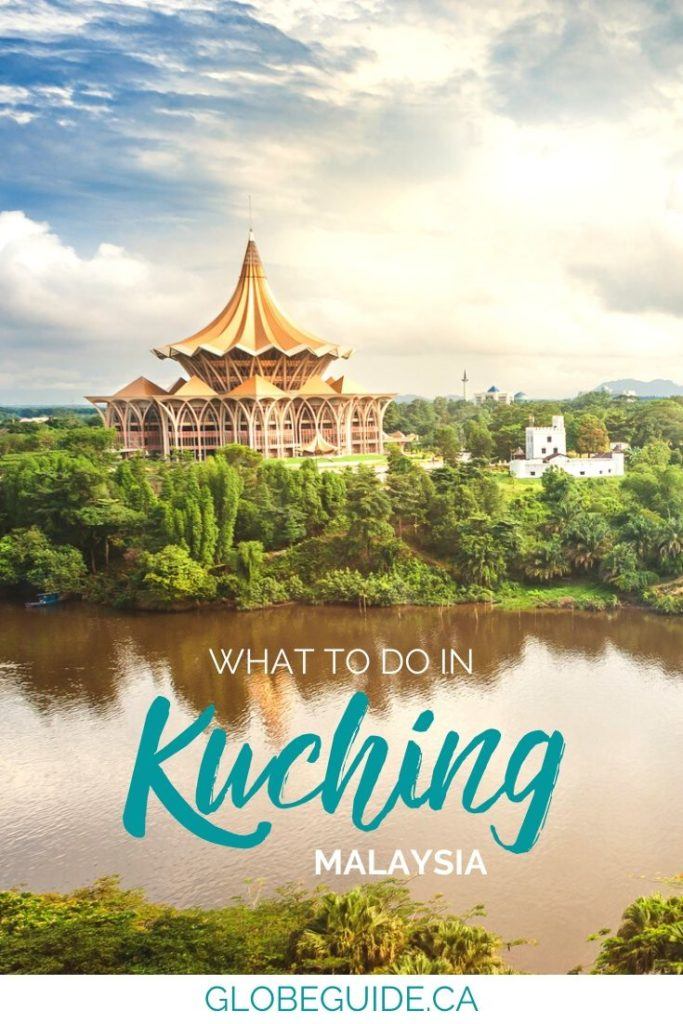 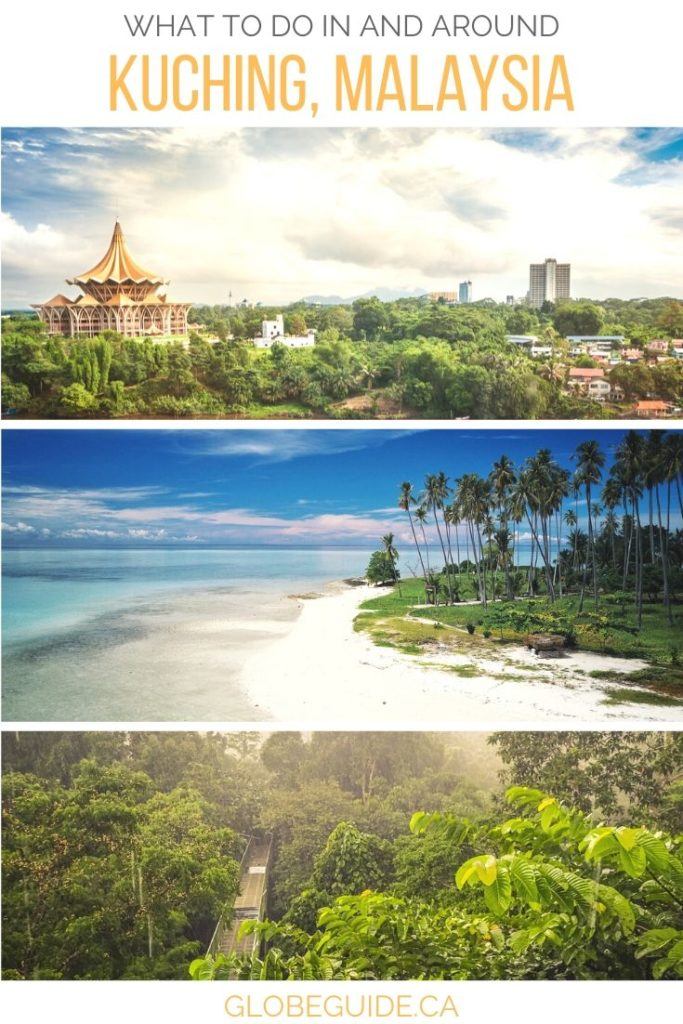