The best things to do in Yerevan, Armenia 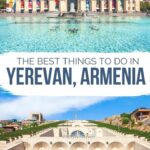 For the best of Armenian cuisine, wine, history and architecture, look no further than Yerevan.

With its dusty rose facades, dazzling fountains and backdrop of towering Mt Ararat, Armenia’s capital city is quite picturesque. The straightforward, walkable layout makes it easy for visitors to navigate the busy city centre, and on the outskirts you’ll find impressive monuments to explore along with traditional activities like carpet weaving and brandy making. 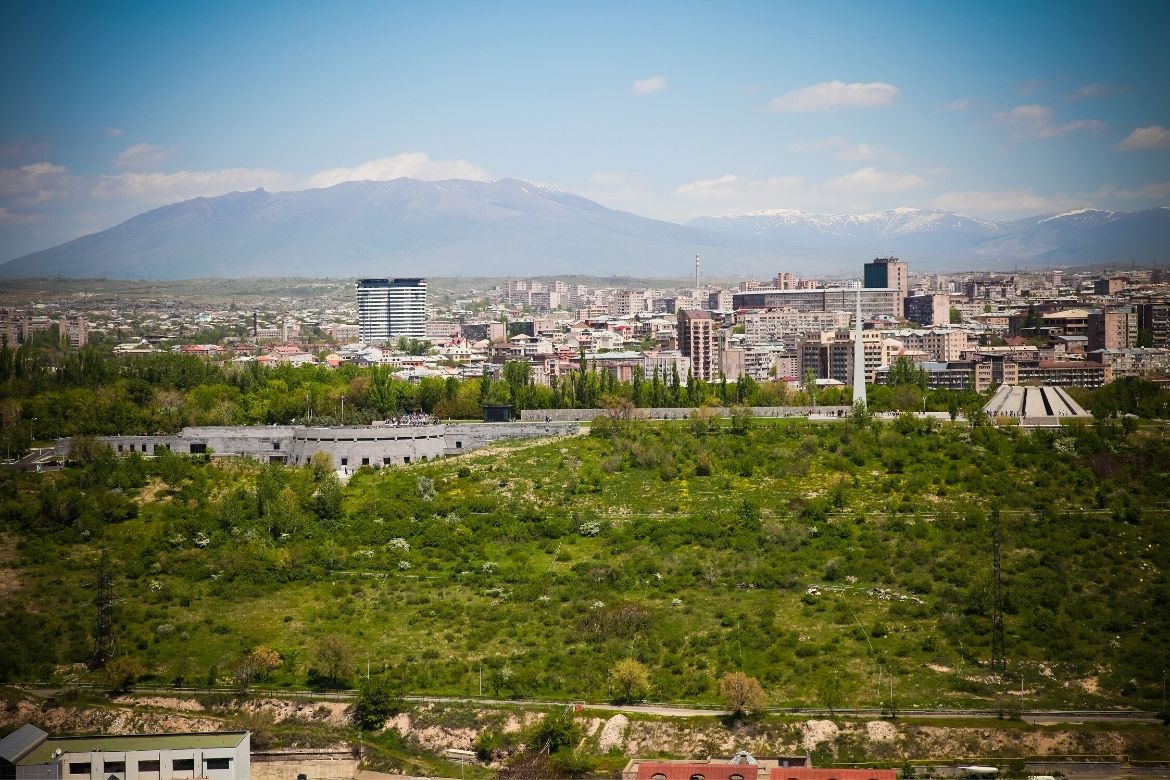 From foodie stops to fun night spots, here are some of the best things to do in Yerevan Armenia. 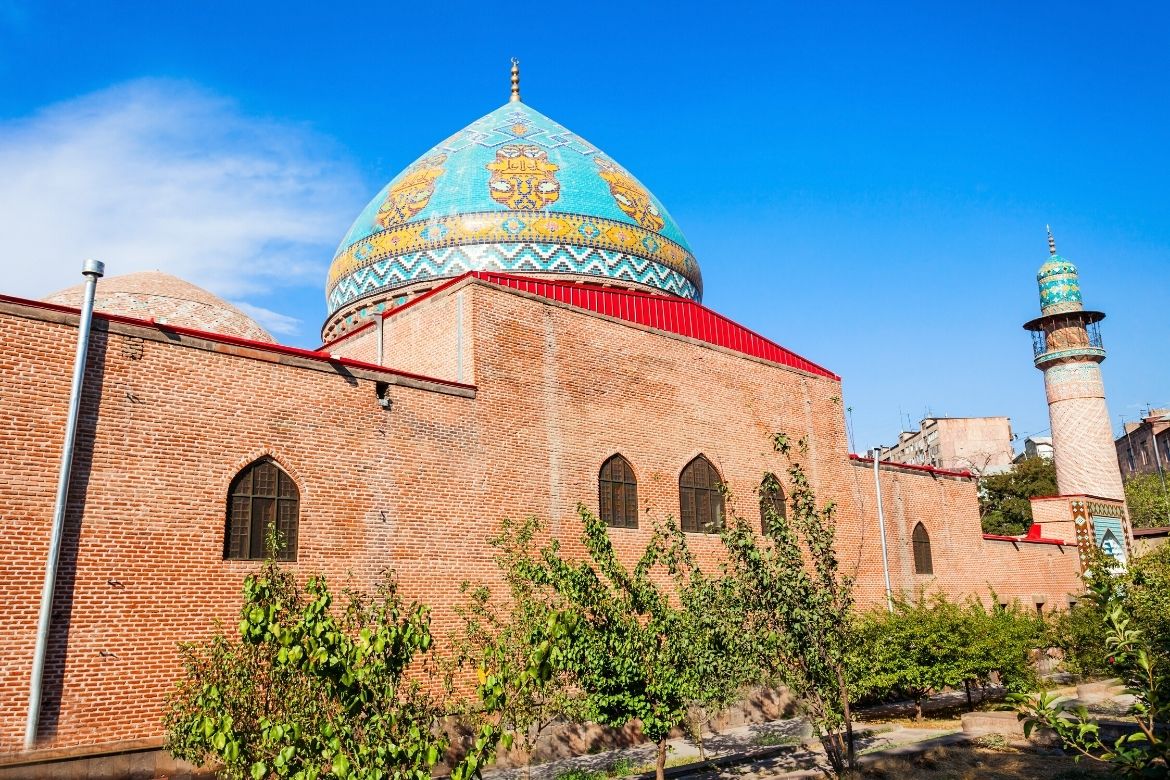 Republic Square is one of the top places to visit in Yerevan, and this massive plaza is the heart of the city. A huge traffic circle is framed by some of the city’s most important buildings like the National Art Gallery, central post office and the Government House of the Republic of Armenia. 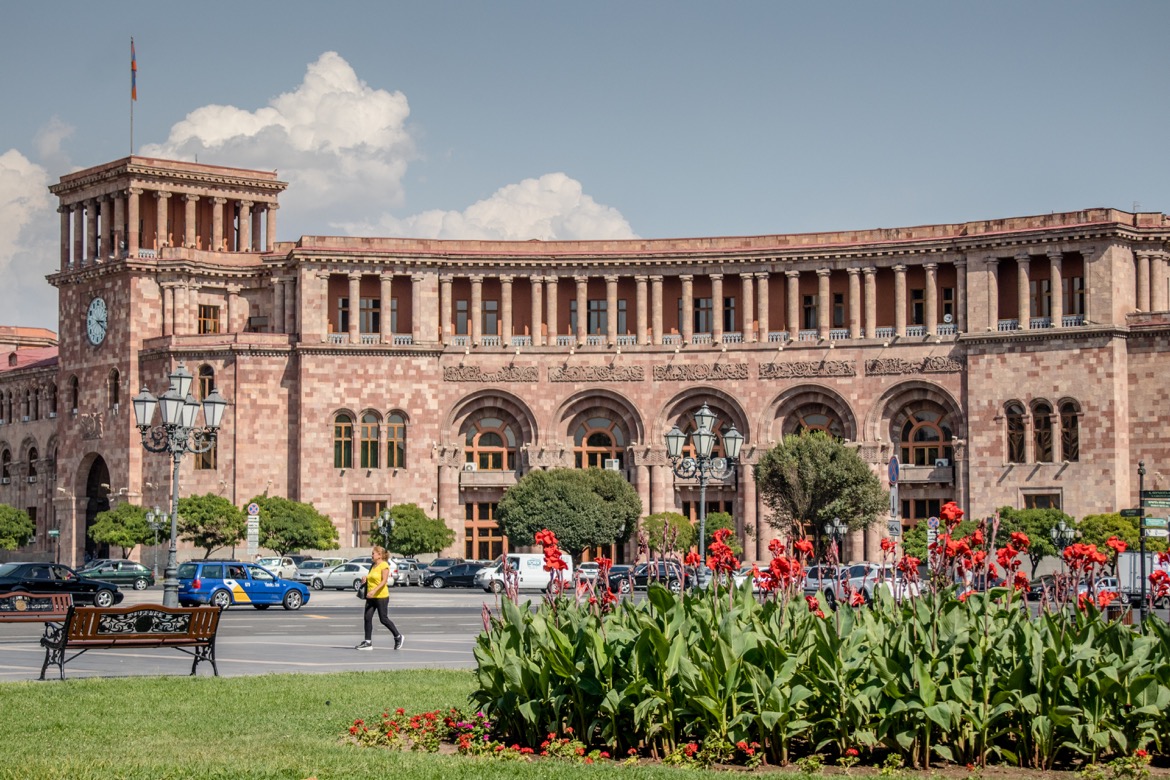 Notable attractions include the grand Marriott Hotel, fountains, and the National Art Gallery and History Museum of Armenia which holds artifacts detailing notable moments from the country’s past.

All of the buildings were constructed out of tuff, which is a traditional Armenian stone with a range of hues including yellow, orange, purple and red. ‘Artik’ is what was used in Yerevan, and its blush pink hue changes throughout the day depending on how the sun hits it. 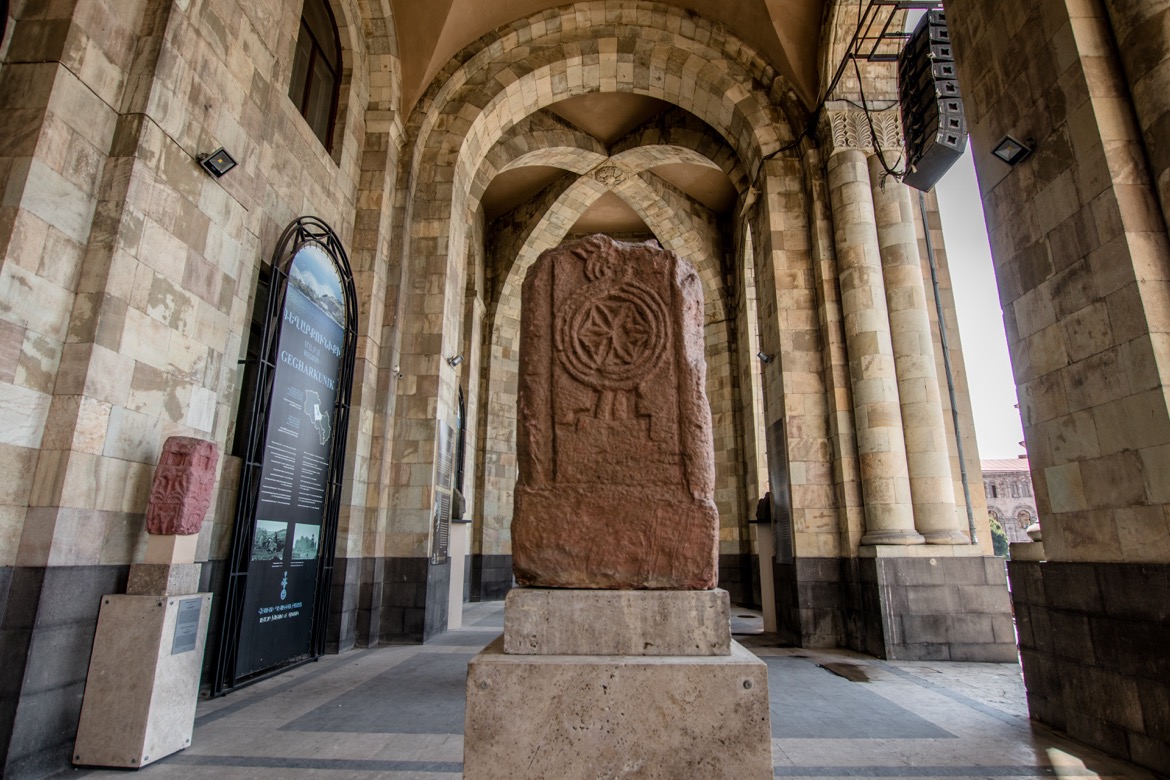 Yerevan doesn’t mess around when it comes to fountains–seriously, they’re everywhere. In fact, some are so large they stretch across entire parks, with the water features and lights even timed to music. 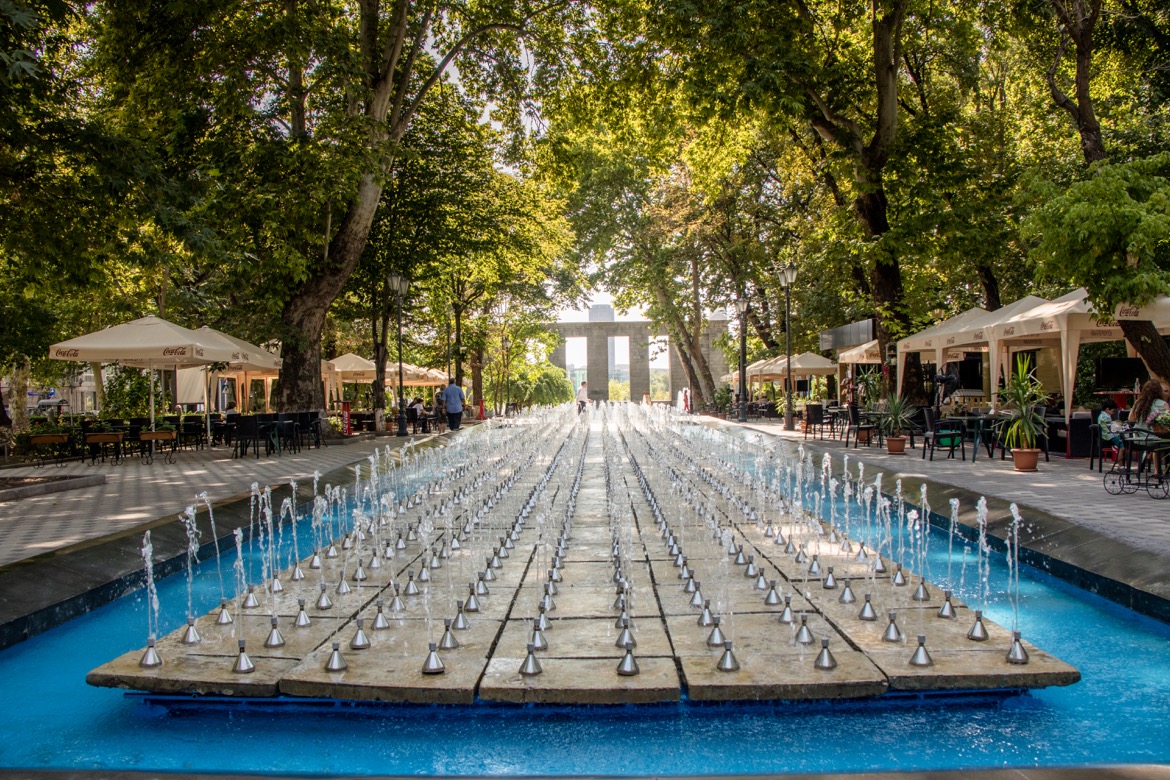 Some of the best are in Shahumyan Park and English Park which are just steps away from each other in the city centre. At night, entire families head down to the Yerevan 2800th Anniversary Park where the fountains shoot overhead in all colours of the rainbow, and kids can run around underneath. 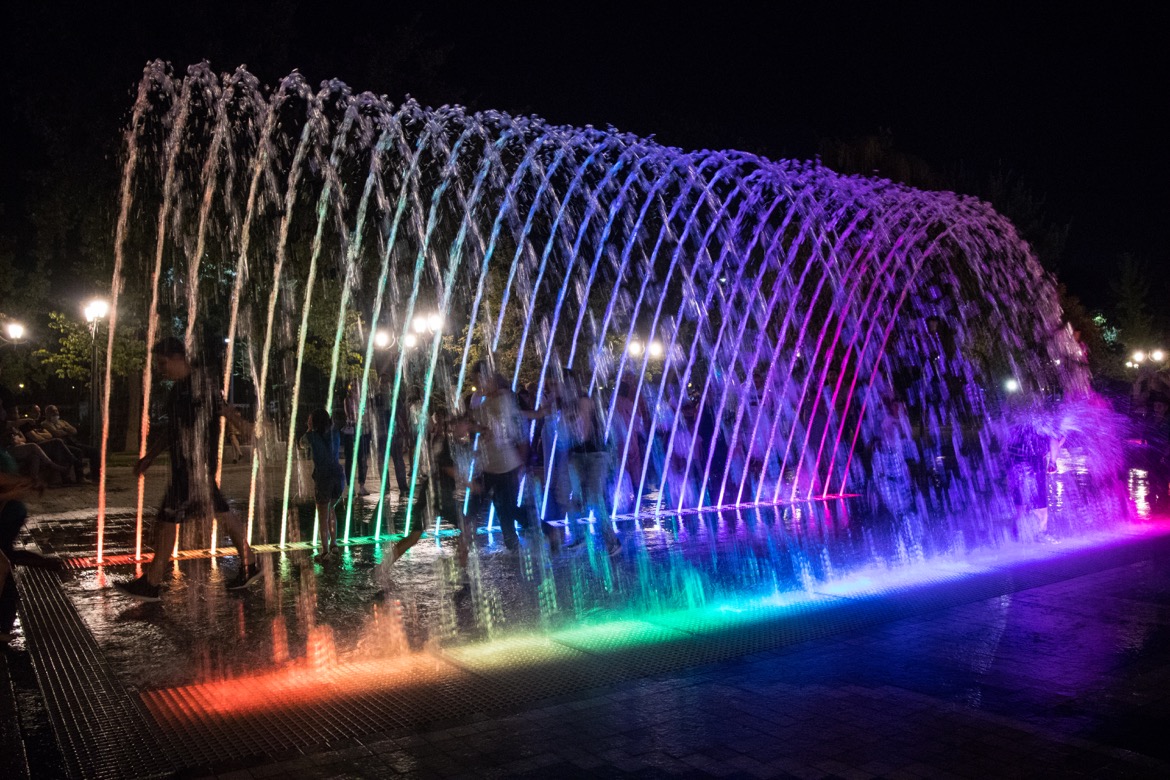 The most famous fountain is in Republic Square, which is home to the singing and dancing fountains. Almost every night from 9-11 pm, classical musical masterpieces, rock and pop songs play as the water dances and colours change in rhythm with the music.

The spectacle happens from late May through October, making this one of the best Yerevan attractions. 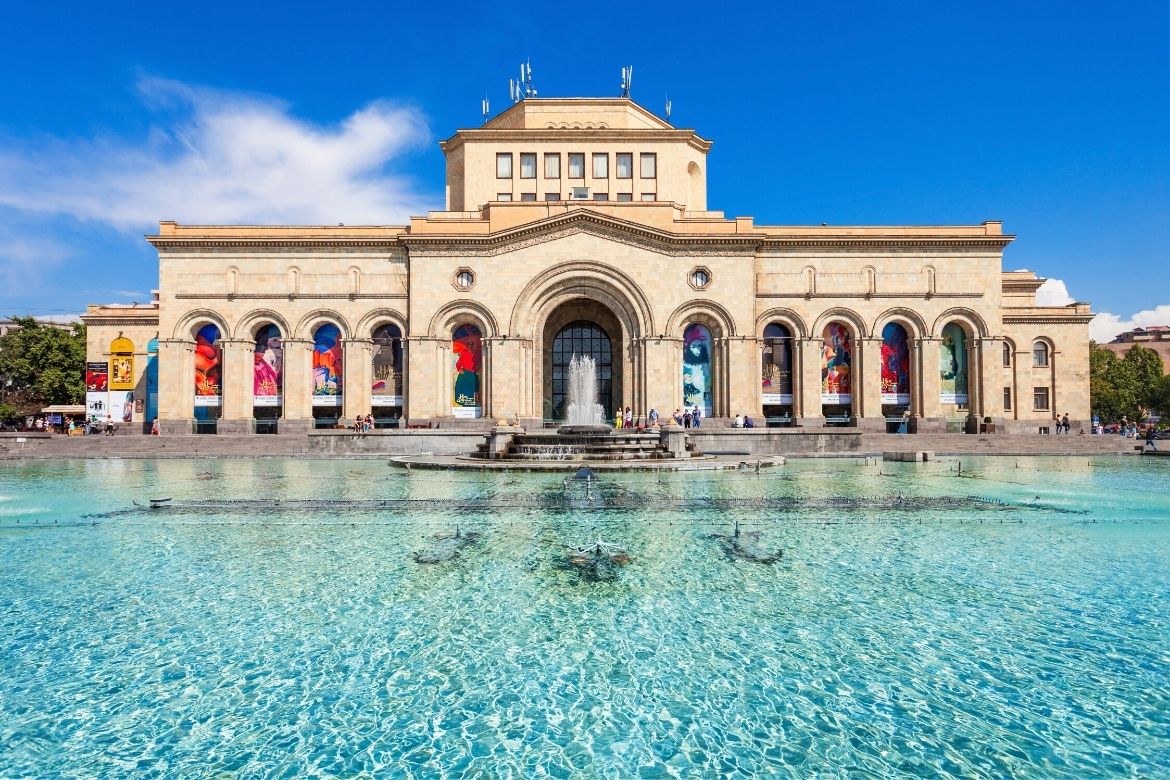 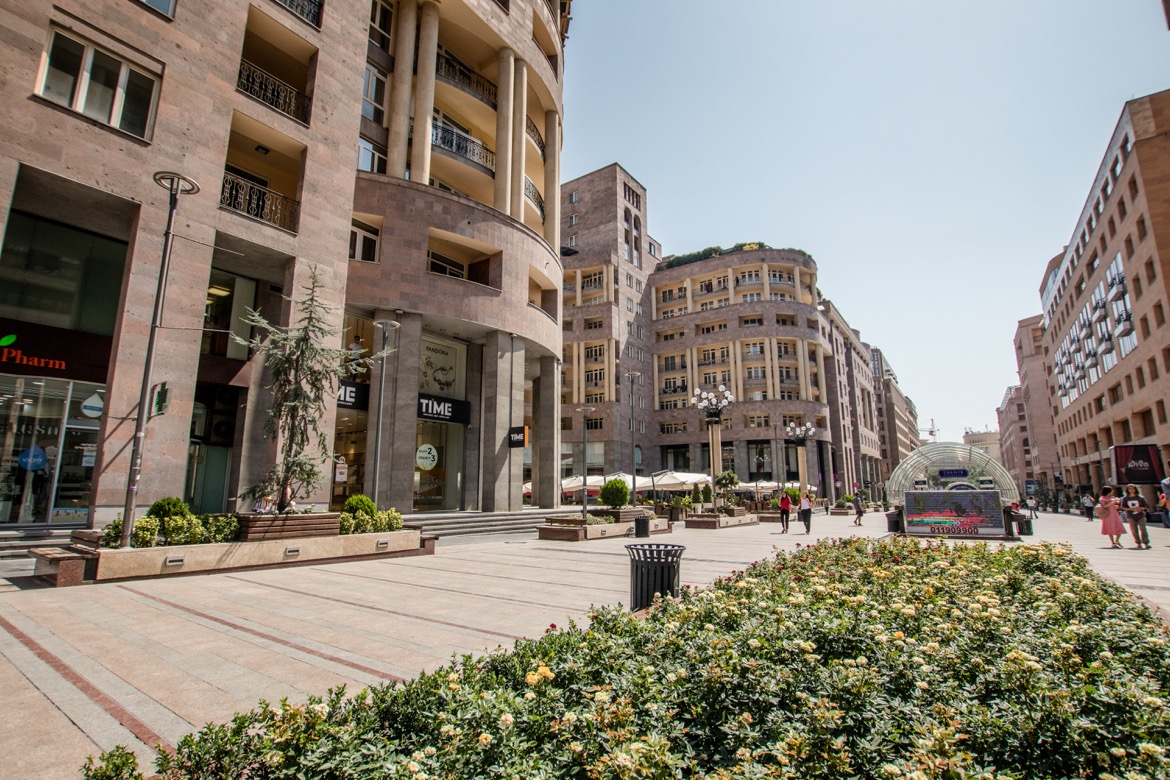 Abovyan Street, Western Avenue, North Avenue and Tashir Street are where most people go, and on weekends there’s an open-air market near Republic Square on on Nalbandyan Street called The Vernissage selling the likes of ornate carpets, art, needlework and jewelry which makes it the perfect spot to pick up a few souvenirs. 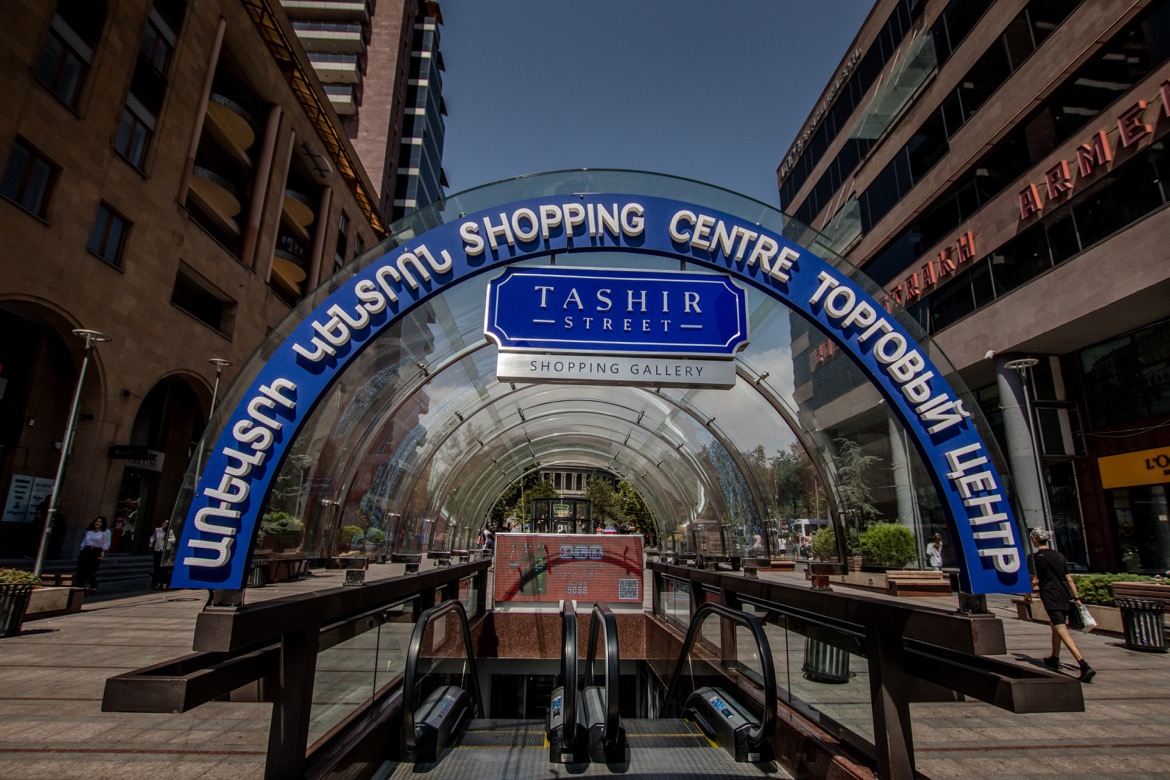 If you love BBQ, then you’ve come to the right place. Sizzling, grilled meats are an Armenian specialty, and ‘khorovats’ are made with pork, beef, lamb, chicken and sometimes veal. To prepare it, the meat is placed on skewers then grilled or baked in a clay oven, and usually served with a side of roasted vegetables, bread, cheese and a tomato/cucumber salad.

To try some of this mouthwatering cuisine, head to Vostan in downtown Yerevan which has excellent food along with a beautiful courtyard. 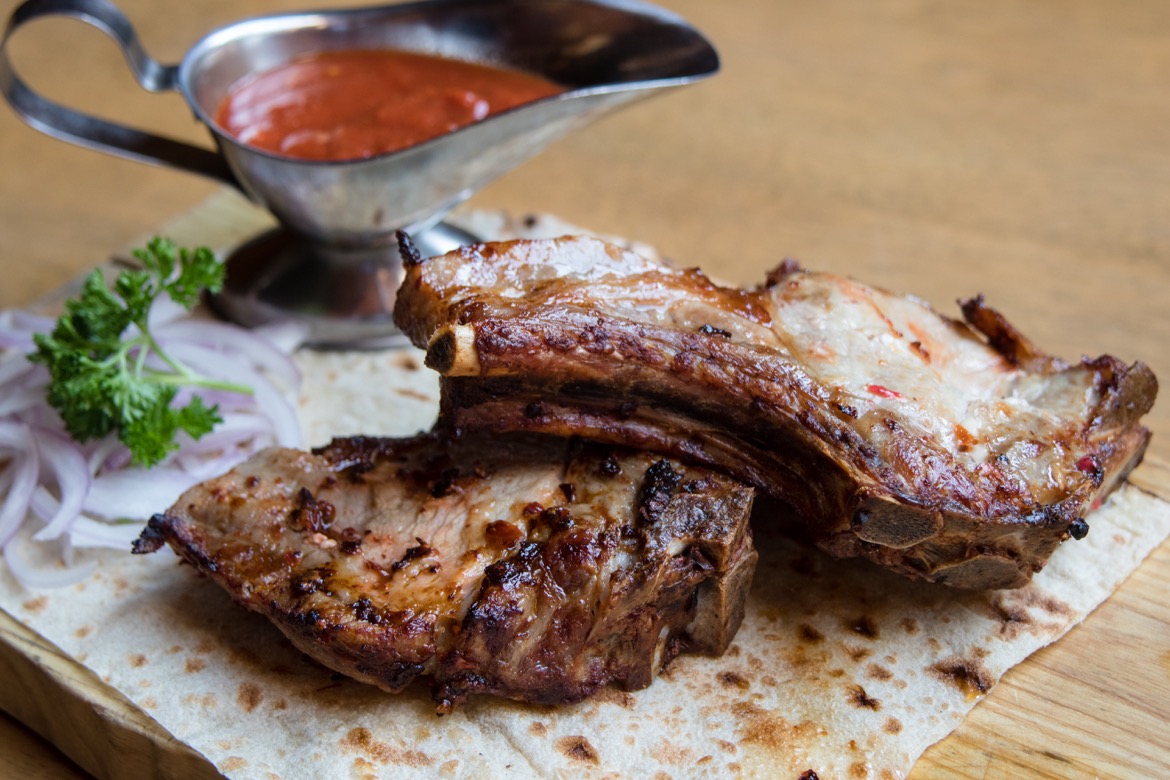 With bragging rights as one of the world’s oldest wine regions (more than 6,000 years old!), it’s no surprise Armenia produces such excellent wine. You’ll find bottles for sale all over Yerevan, and there are also plenty of wine bars around the city–especially on Saryan Street where you’ll find In Vino which is one of the top restaurants. 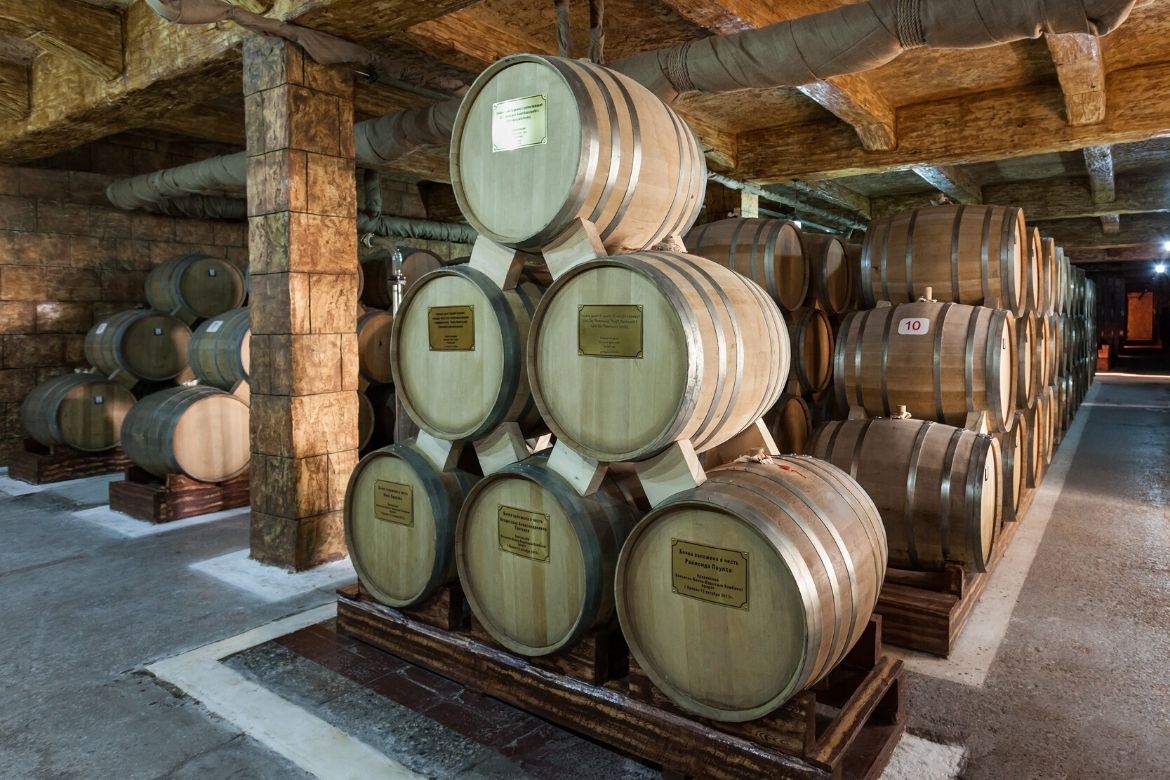 If strong stuff is more your fancy, book a brandy tasting tour in Yerevan. The amber-hued bevvy is another Armenian speciality, and one of the best places to try it is at ArArAt (also known as the Yerevan Brandy Factory) which has been around since 1887.

Tours of the museum are offered in multiple languages almost every day, which include an overview about the factory’s history and production practices and the opportunity to sip their award-winning brandies. Click here to book 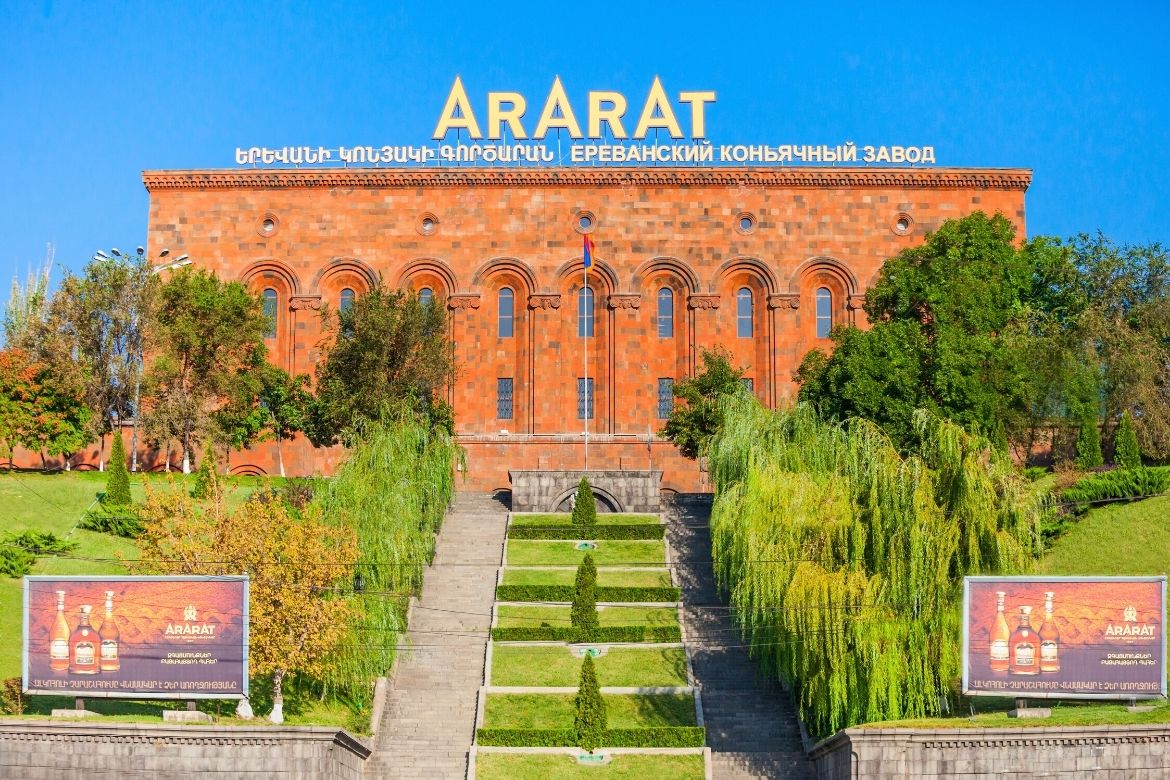 Pose at the Cascade Complex

Get your photo fix at Cascade Complex, which is an Instagrammable giant limestone stairway near downtown Yerevan. Seven escalators are hidden underneath the exterior steps, linking exhibit halls, landings, fountains and modernist sculptures. 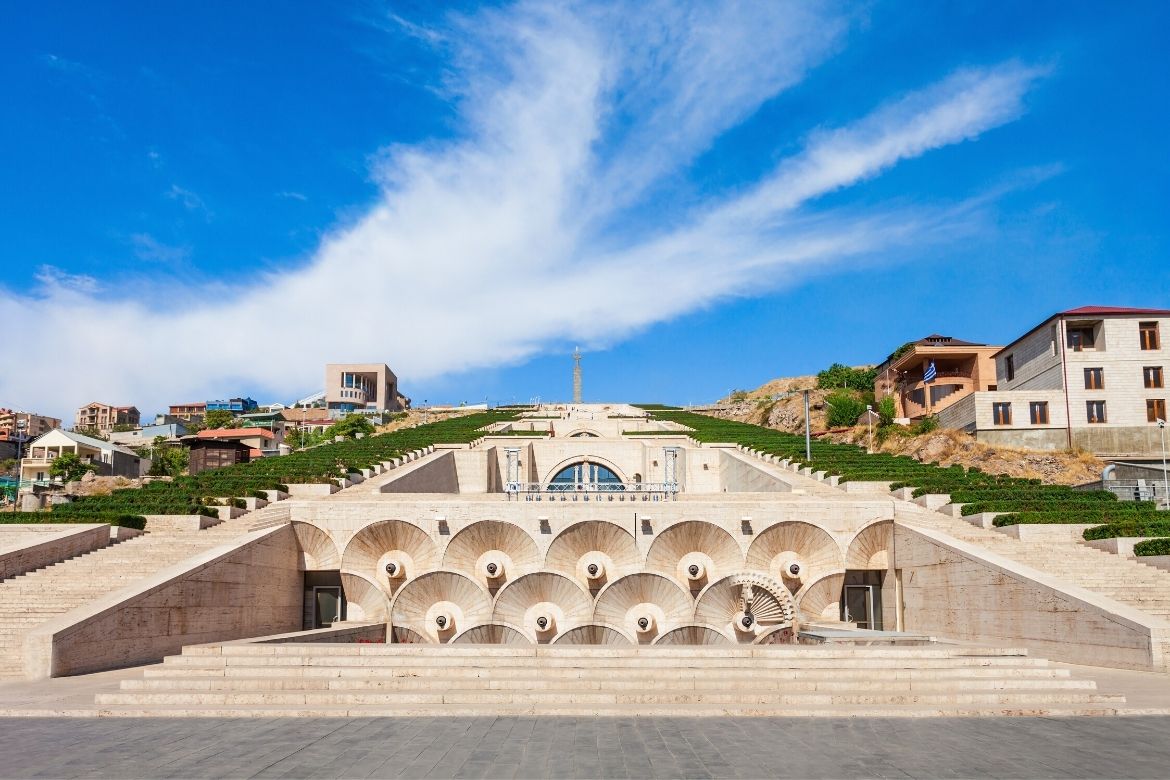 On a clear day there are views of Mount Ararat and central Yerevan, and the courtyard features perfectly manicured gardens. 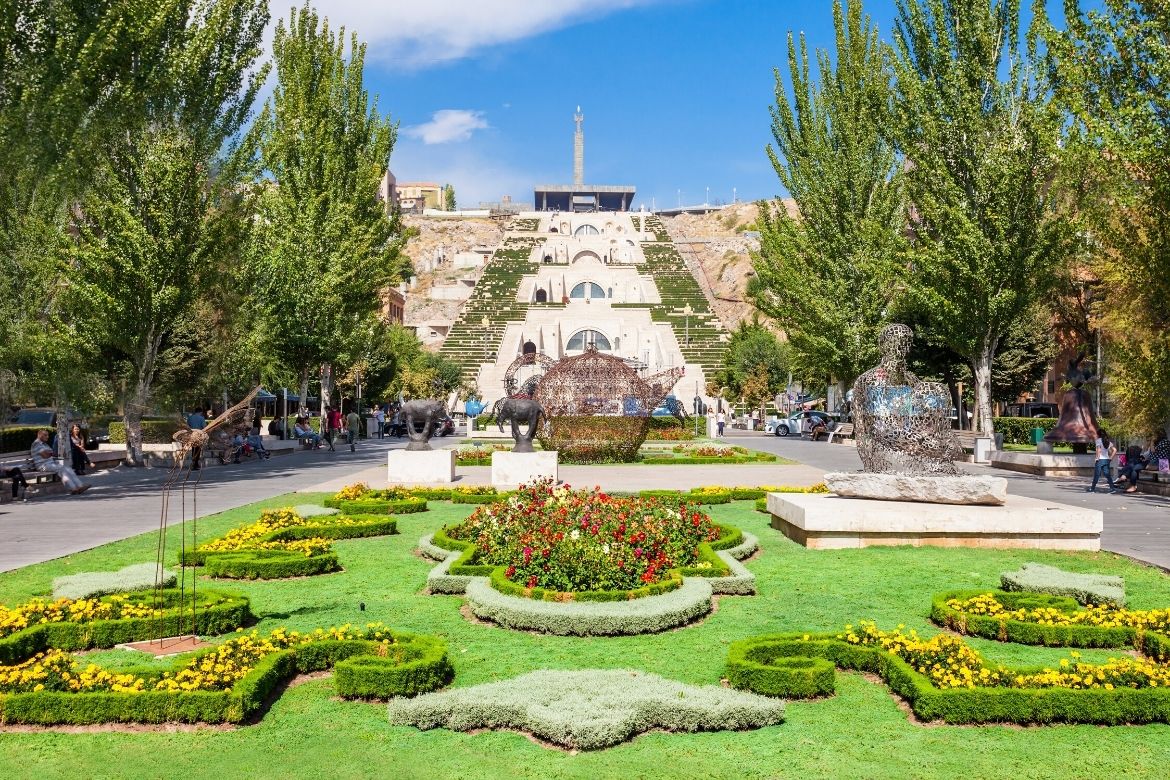 A sobering part of Armenia’s history is documented at the Armenian Genocide Museum & Institute, which is just a few minute’s drive from the city centre. 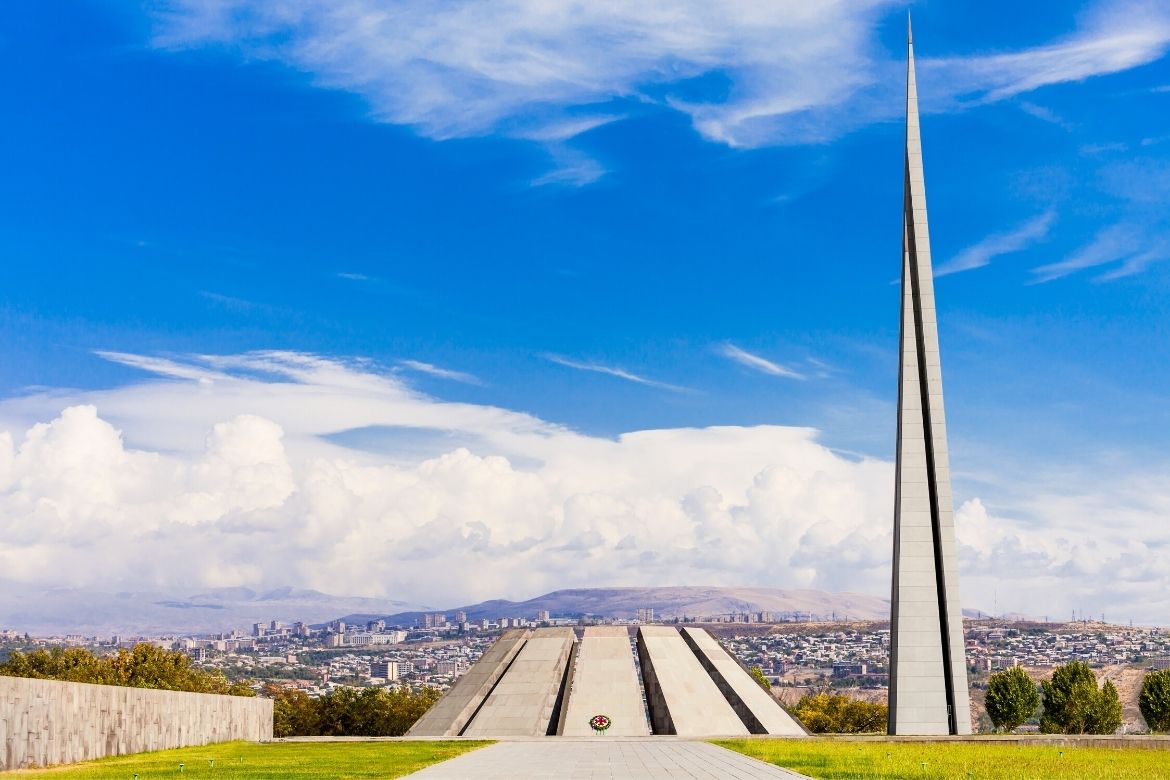 The Tsitsernakaberd Memorial complex opened in 1967, and is dedicated to the 1.5 million Armenians who died during the genocide. About 30 years later, the museum and institute were added, which house a number of exhibitions detailing that terrible time.

Guided tours are available and entrance is free; the museum is open every day except Mondays and holidays. 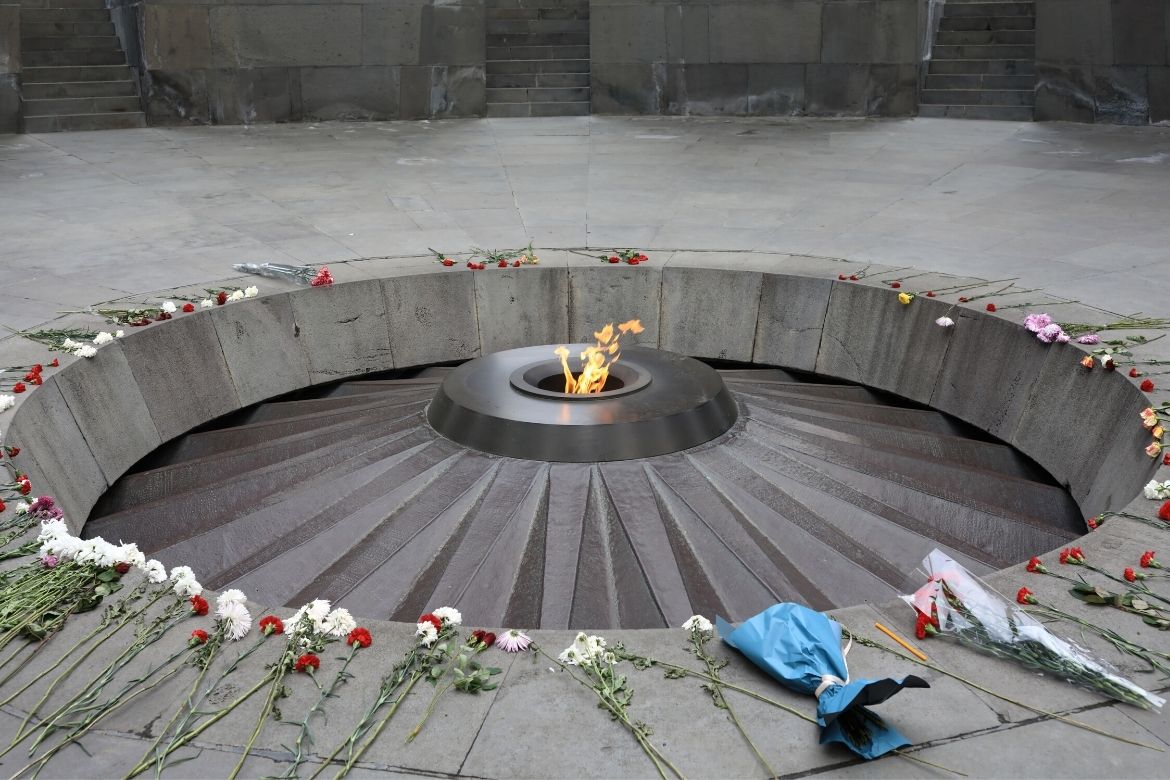 Take a day trip to the top Armenia attractions

Yerevan is the ideal base for visiting Armenia, since day tours to regions all around the country leave from the city centre almost every day. While it usually means a long day of driving on rather sketchy roads, the effort is worth it to explore top sites like ancient monasteries, impressive waterfalls and deep canyons.

Some of the best places to see in Armenia include:

Dilijan: This area in the northern part of the country is known as the ‘Armenian Alps’ thanks to the hiking trails, pristine lakes and ancient monasteries (don’t miss the Haghartsin Monastery) found in Dilijan National Park. 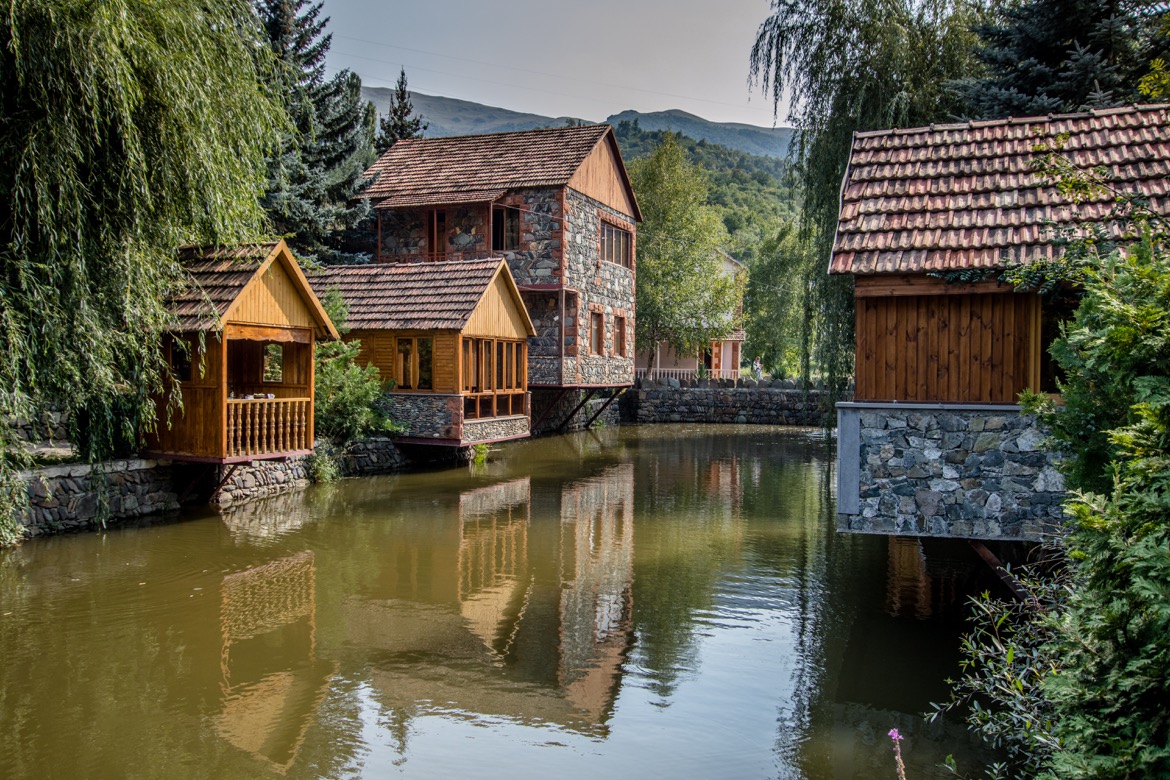 Lake Sevan: A popular weekend getaway during the summer months, Lake Sevan holds bragging rights as one of the world’s largest freshwater, high-altitude lakes. Go boating or jet skiing, walk up the hill to the Sevanavank Monastery for panoramic views, or pack a picnic and explore the pretty peninsula. 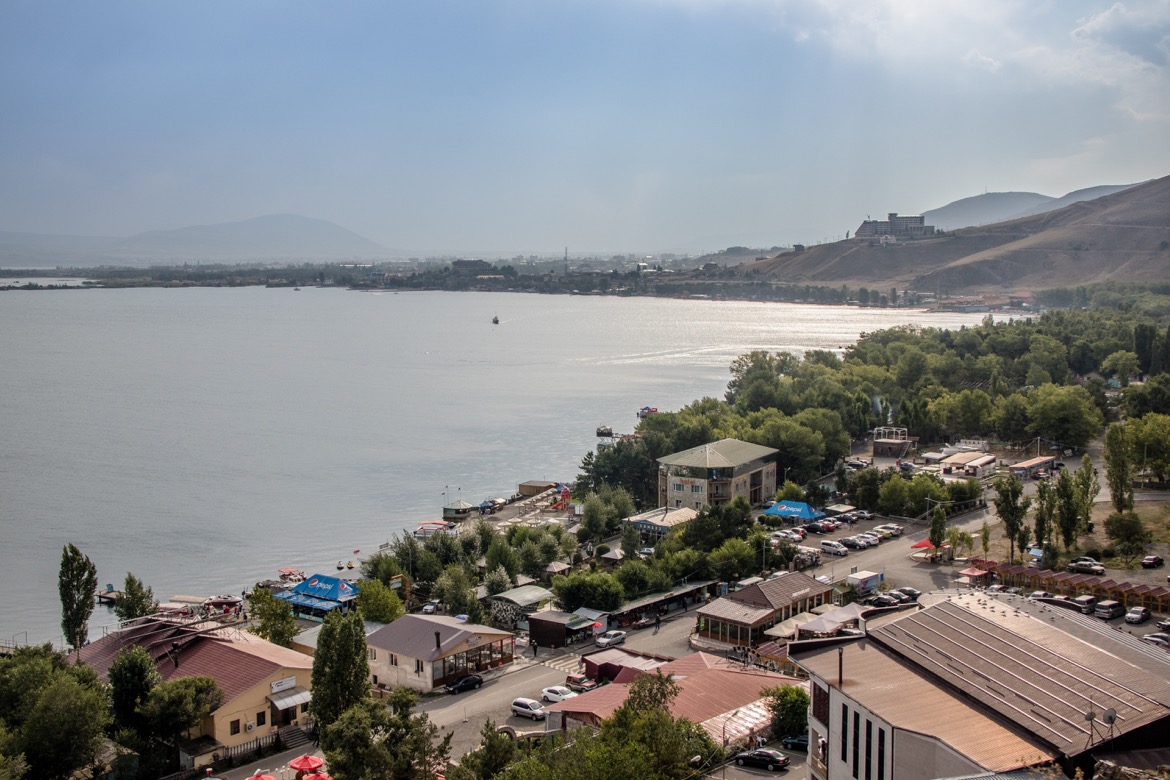 Jermuk: This spa town is famous for its natural thermal waters, and is one of the most beautiful places in Armenia thanks to panoramic views accessed by chairlift and the Jermuk Waterfall.

READ MORE: A travel guide to the spa town of Jermuk, Armenia 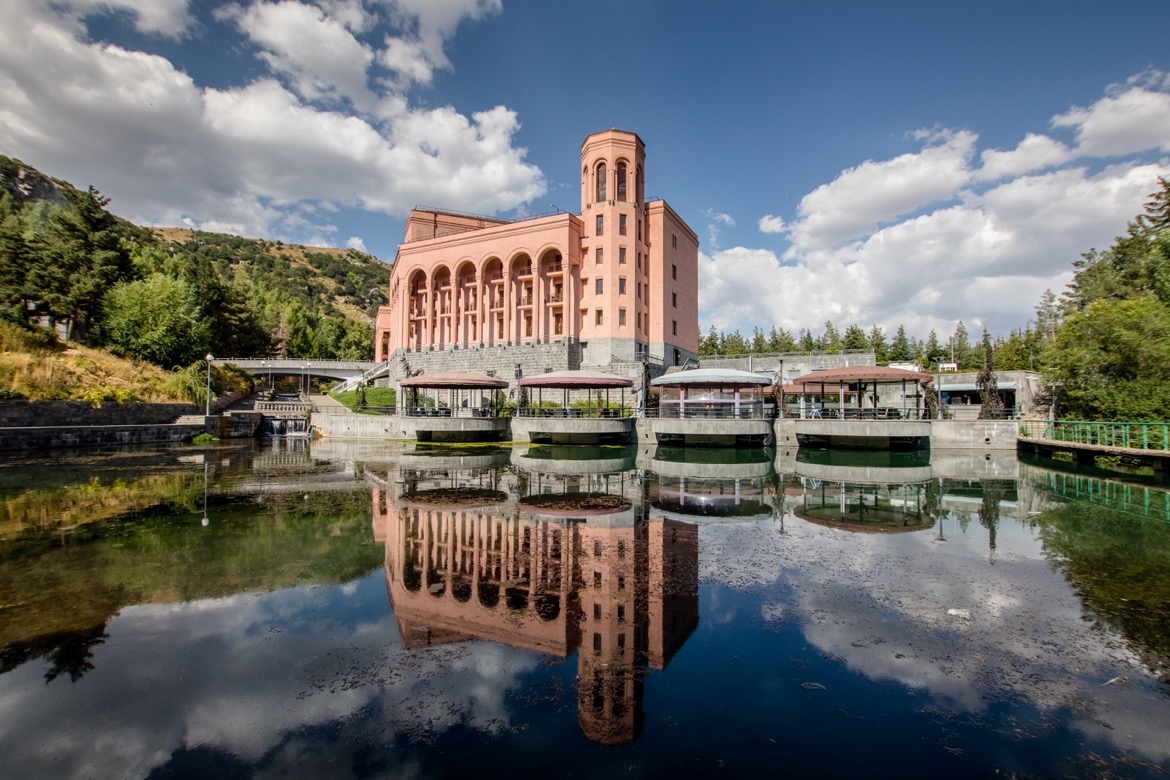 Tatev: A 9th century monastery, a Guinness World Record cable car and zip lines are just a few highlights of this incredible area about four hours southeast of Yerevan. Make the most of the long drive by adding in visits to the breathtaking Shaki Waterfall, and exploring the ancient cave dwellings in Khndzoresk. 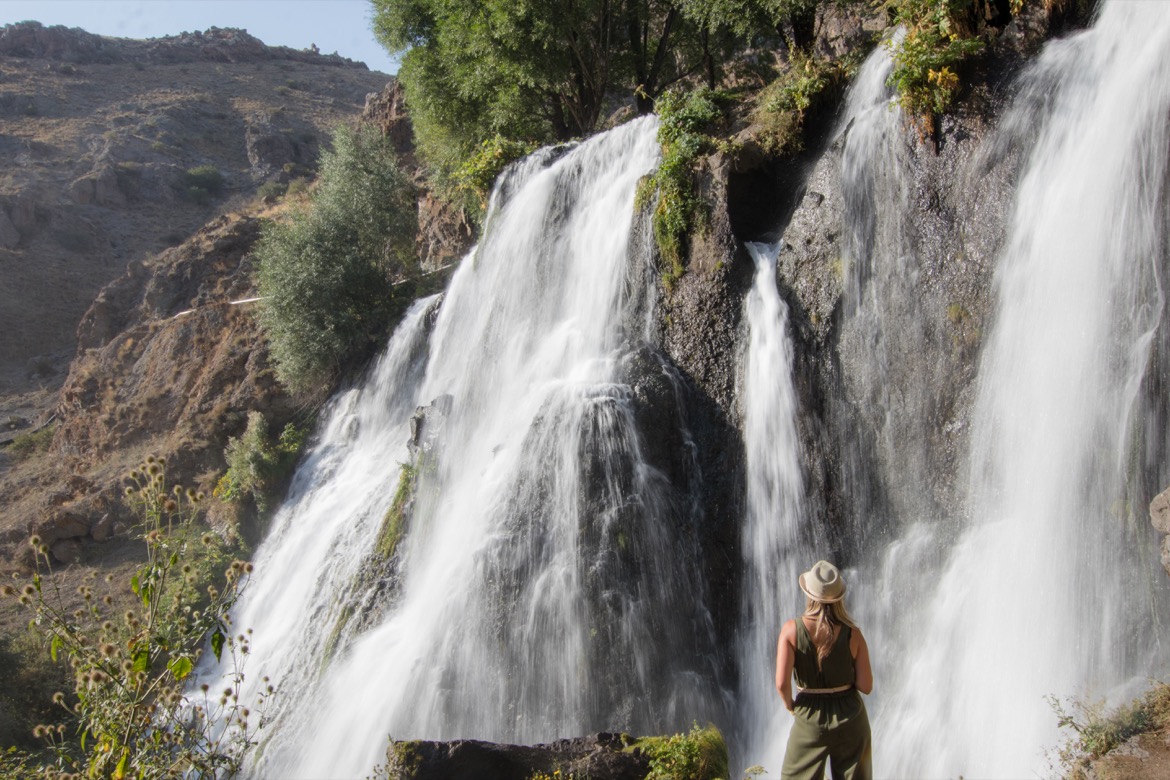 Noravank: You won’t find dramatic, red rock canyons like this anywhere else in the country, and an incredible vantage point to take it all in is from the 13th century Noravank Monastery overlooking the picturesque valley. 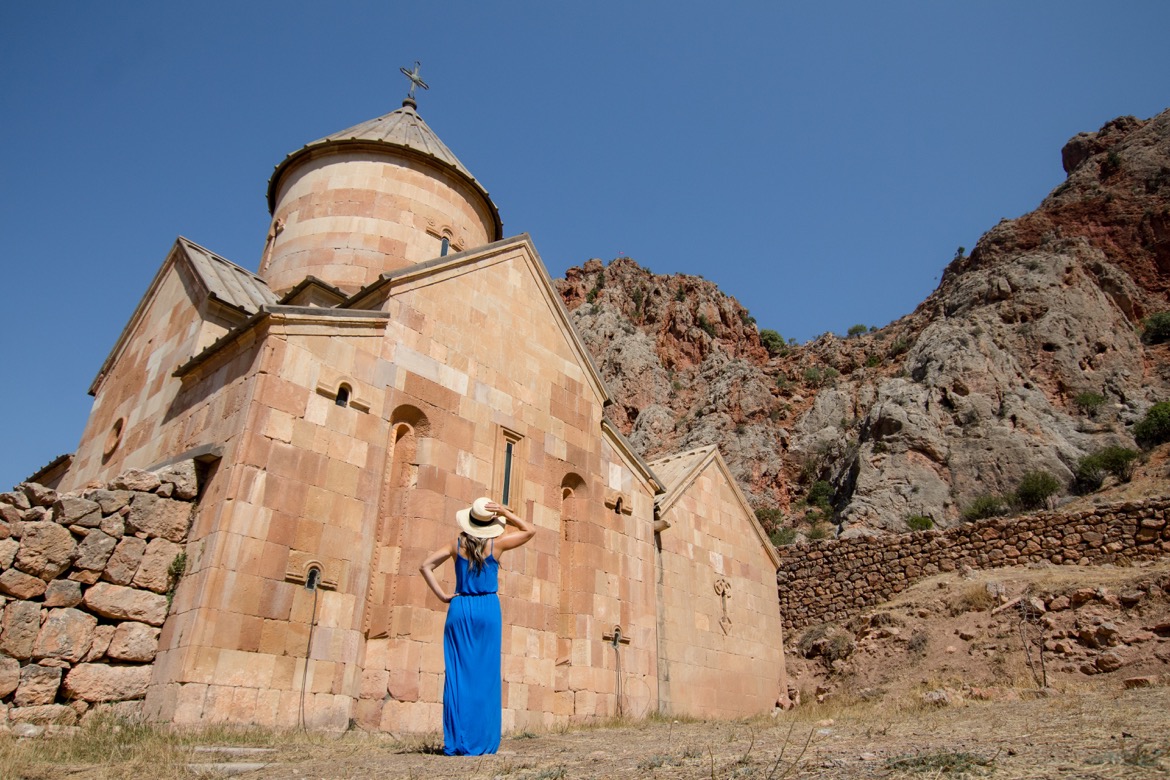 Book one of these Armenian tours:

How to get to and around Yerevan

Yerevan’s Zvartnots International Airport (EVN) is well-connected to destinations around Europe and the Middle East, and some travellers arrive by land from places like Georgia as part of a trip around the Caucasus. Due to ongoing conflicts, border crossings are not permitted between Turkey or Azerbaijan.

Once you get to Yerevan, taxis are quite inexpensive (for example, about $4USD to get between the airport and city centre); you can organize a cab or rideshare through the GG or Yantex apps. 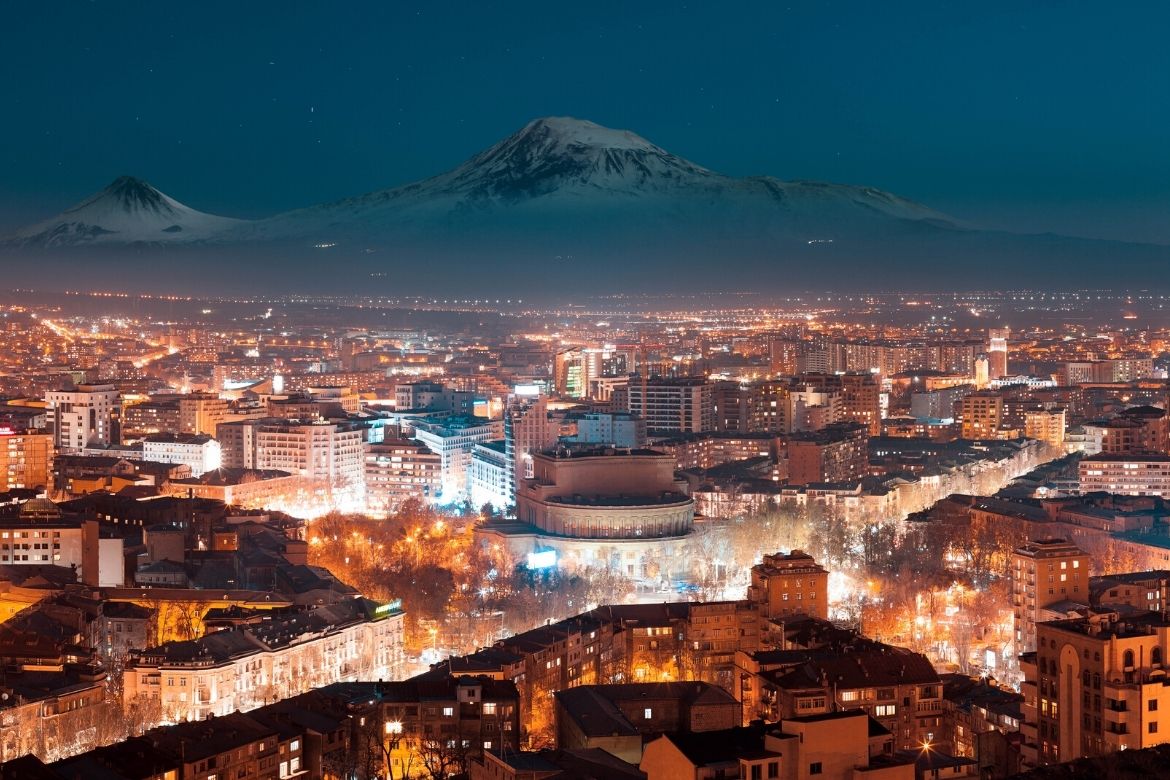 Where to stay in Yerevan

There are plenty of hotels right in the centre, like the Best Western Plus Congress Hotel where some rooms overlook the fountains and the beautiful Armenia Marriott Hotel Yerevan located right in Republic Square.

Some rooms at the modern DoubleTree Hilton have views of Mt Ararat, and Republica Hotel Yerevan gets rave reviews for its good location and helpful staff. 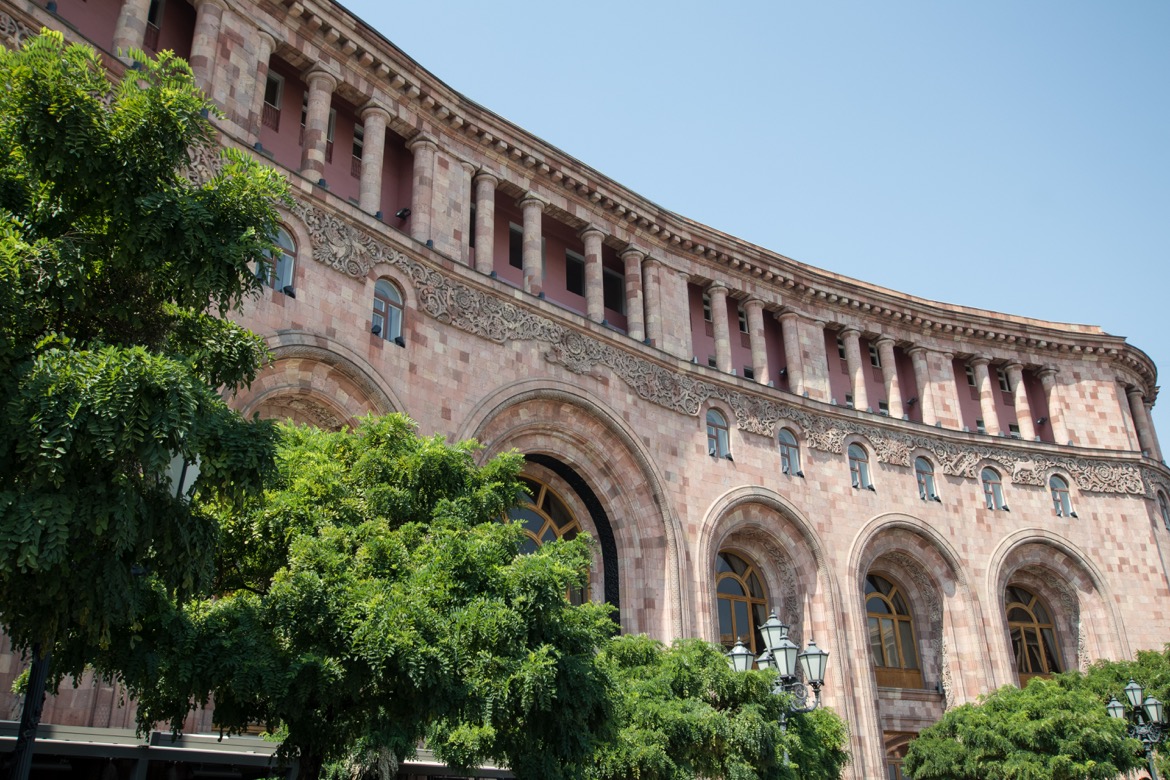 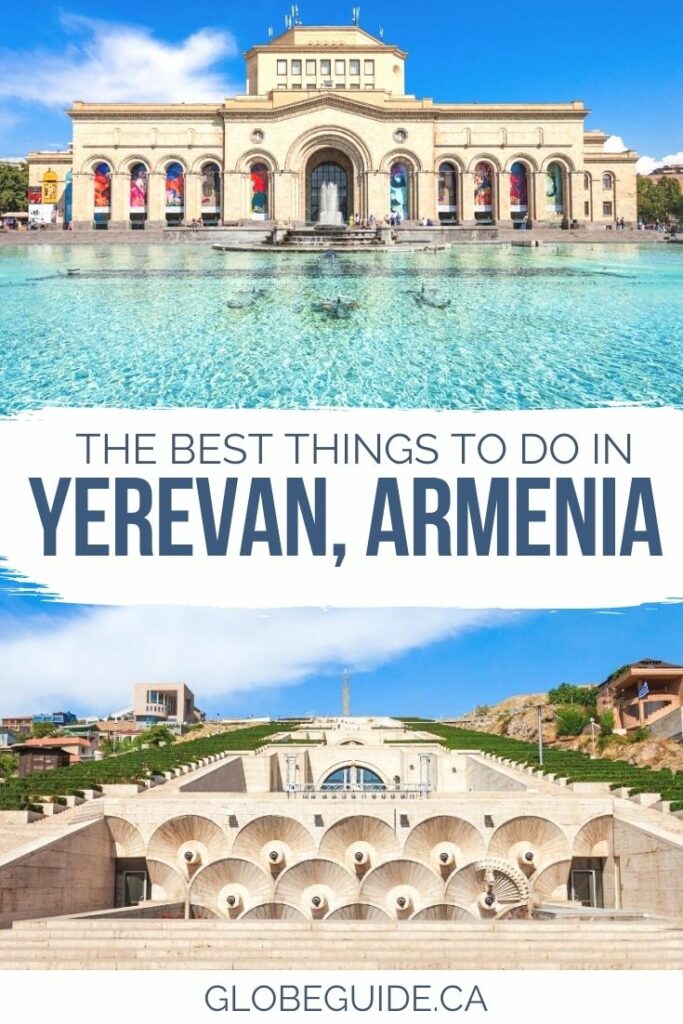 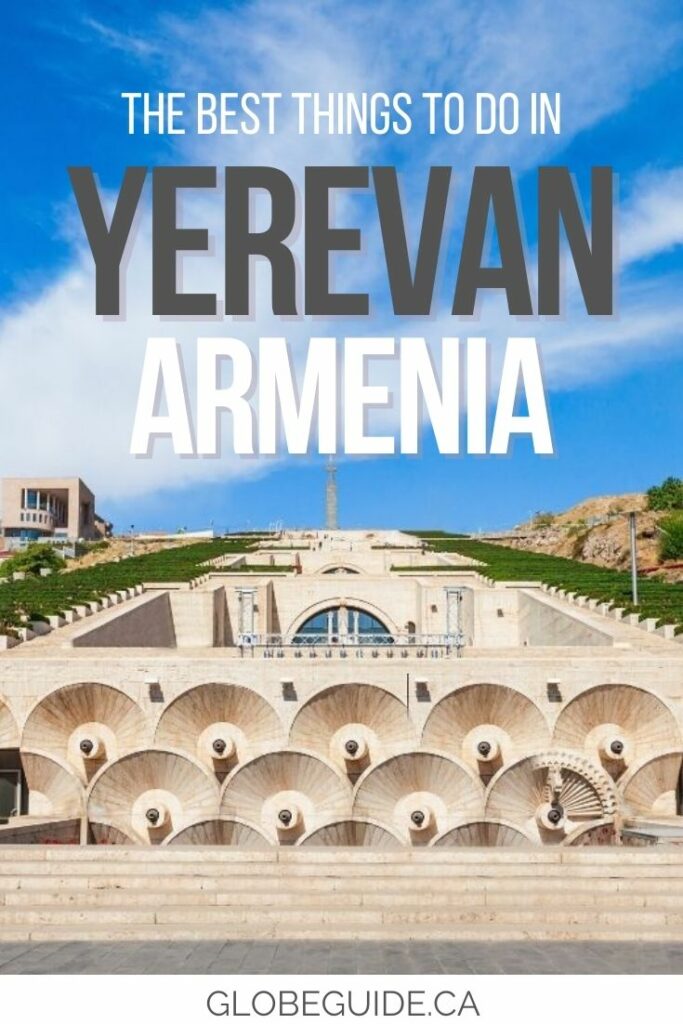 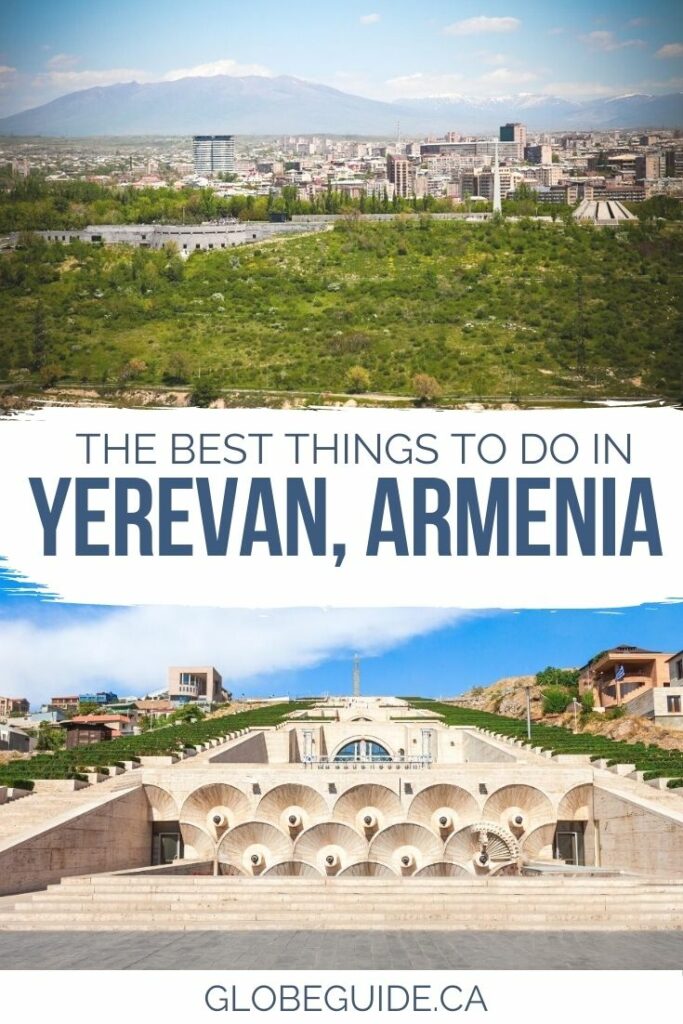