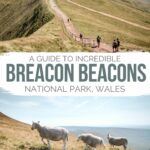 Towering peaks, vistas of rolling hills that go on for miles, waterfalls and stargazing in a Dark Sky Preserve are among the treasures of Brecon Beacons National Park. 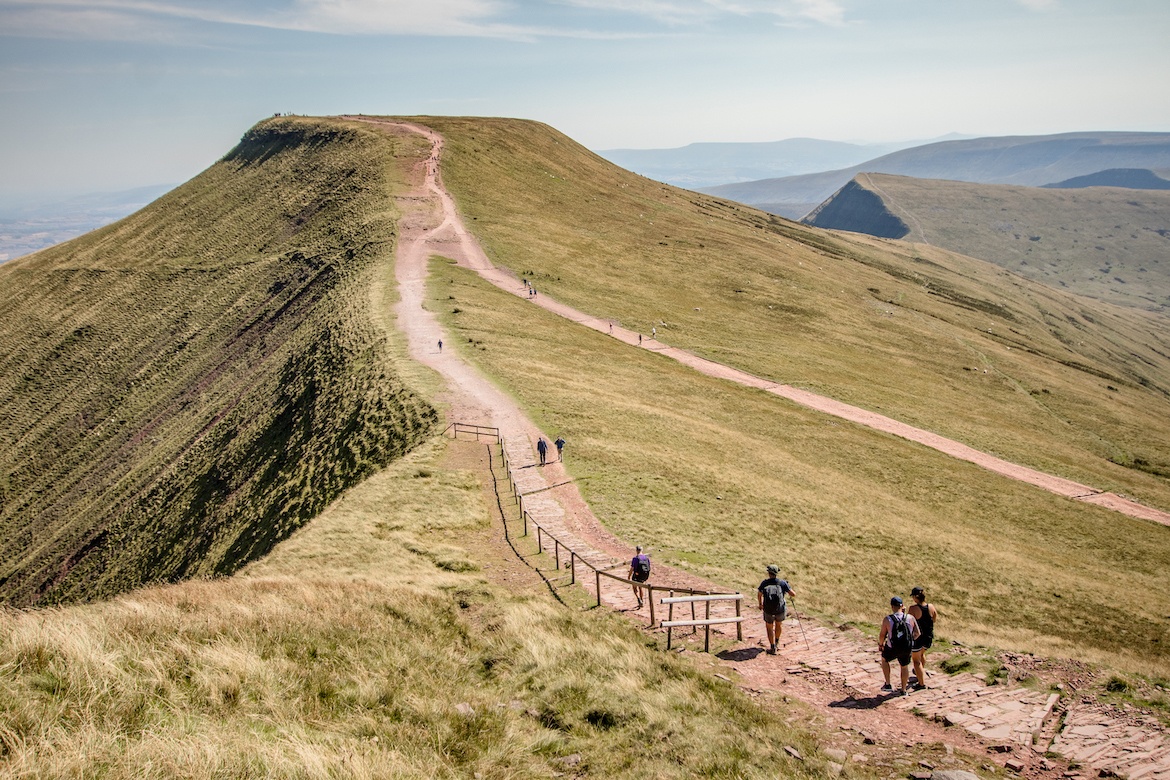 This idyllic escape is known for its mountains, sweeping valleys, and walking trails that wind through thick forests and past tranquil streams, sometimes without another soul in sight save for a flock of grazing sheep. 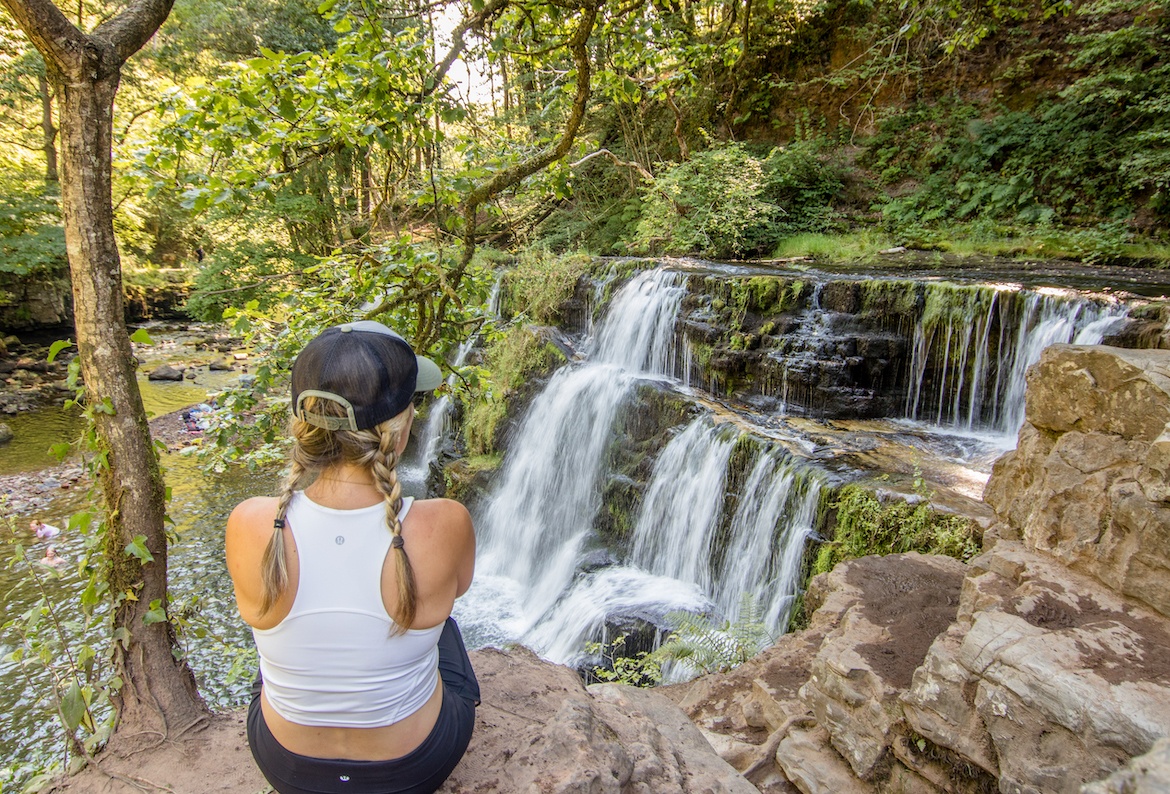 While there are plenty of things to do in Brecon Beacons like exploring the charming towns, caving, cycling and visiting one of its nine castles, it’s possible to see two of the region’s top natural wonders in a single day.

Start with an early morning hike up to Pen-y-Fan for jaw-dropping views, then spend the afternoon cooling off at the swimming holes along the fantastic Four Waterfalls Trail for the ultimate adventure in Brecon Beacons National Park. 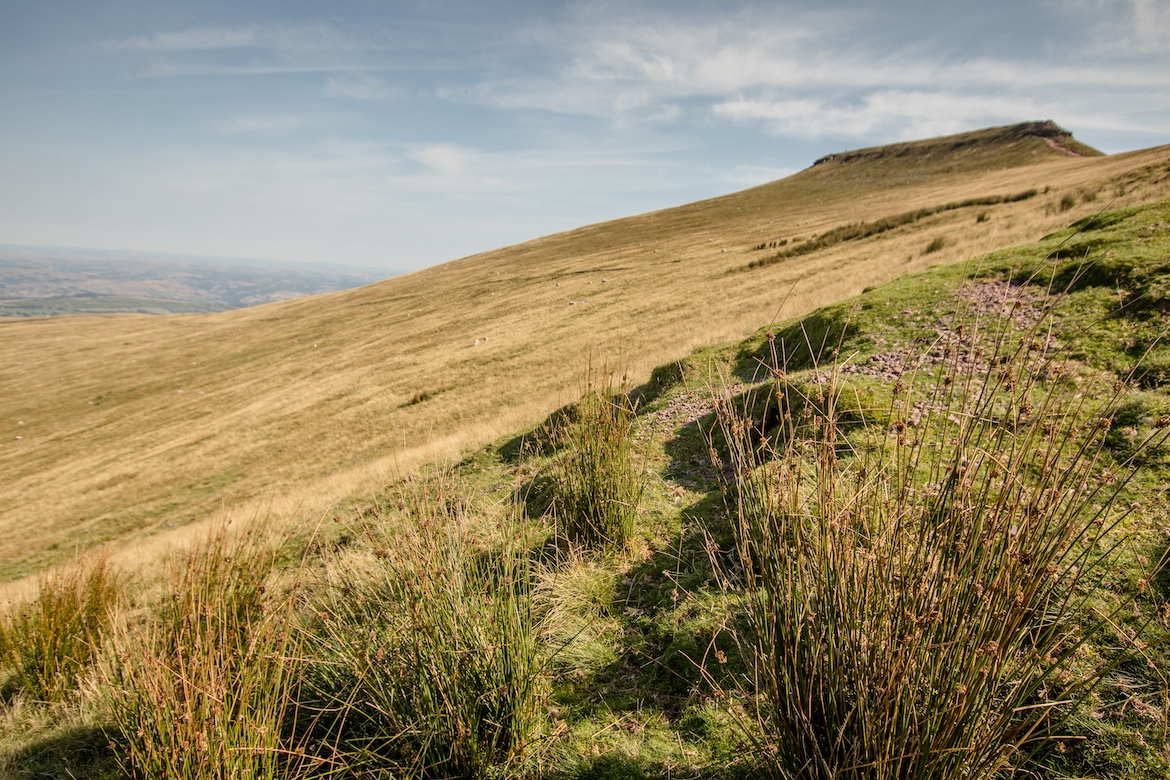 Getting to Brecon Beacons National Park

Home to the highest mountains in southern Britain, the Brecon Beacons are also surrounded by three ranges: the Black Mountain Range, Fforest Fawr and Black Mountains. Unique features like limestone, tilted rock and caves helped it become designated as a UNESCO Geopark, the first of its kind in Wales.

Roads through the park are narrow and windy and cell phone reception can be spotty, so be sure to plug in these coordinates for the Four Waterfalls and Pen y Fan parking lots before heading out: 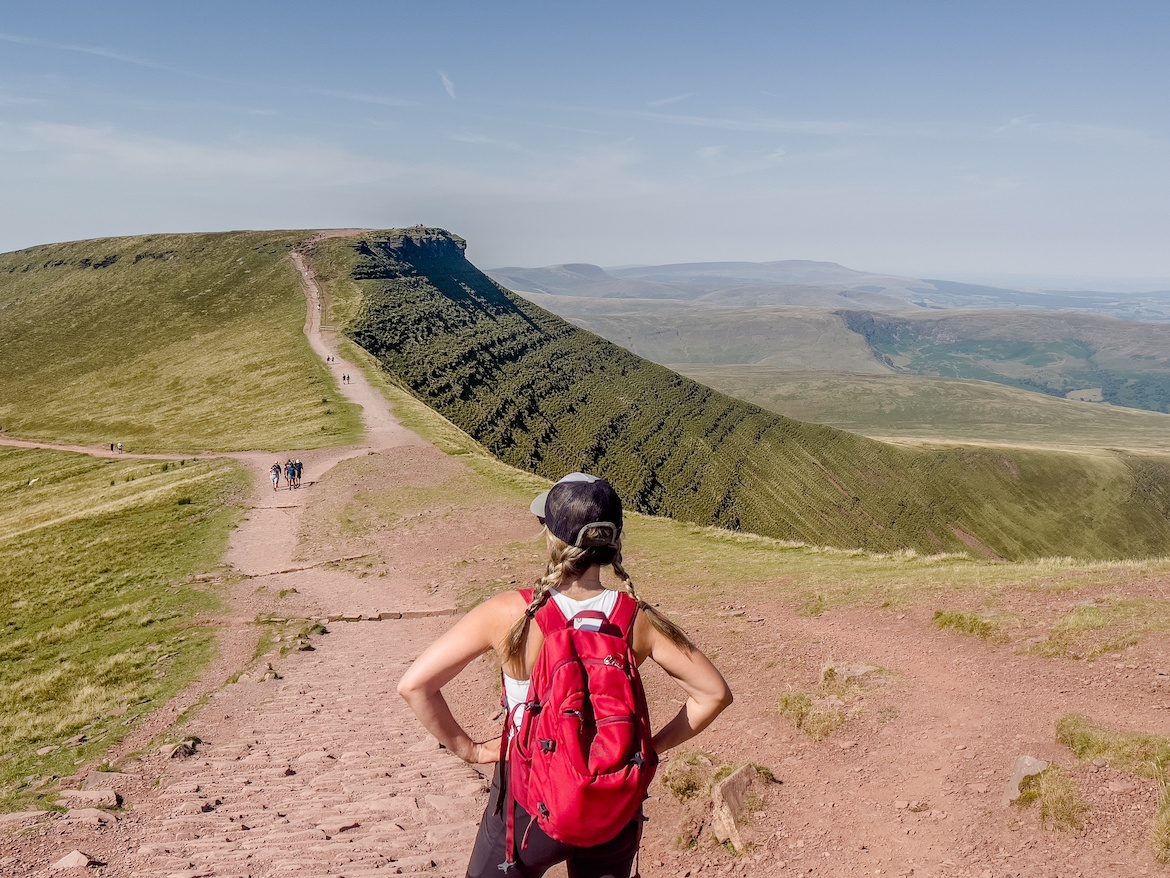 One of the best walks in Brecon Beacons is up Pen-y-Fan, since it only takes about an hour to talk up a steady slope to the 886-metre high summit for spectacular views. 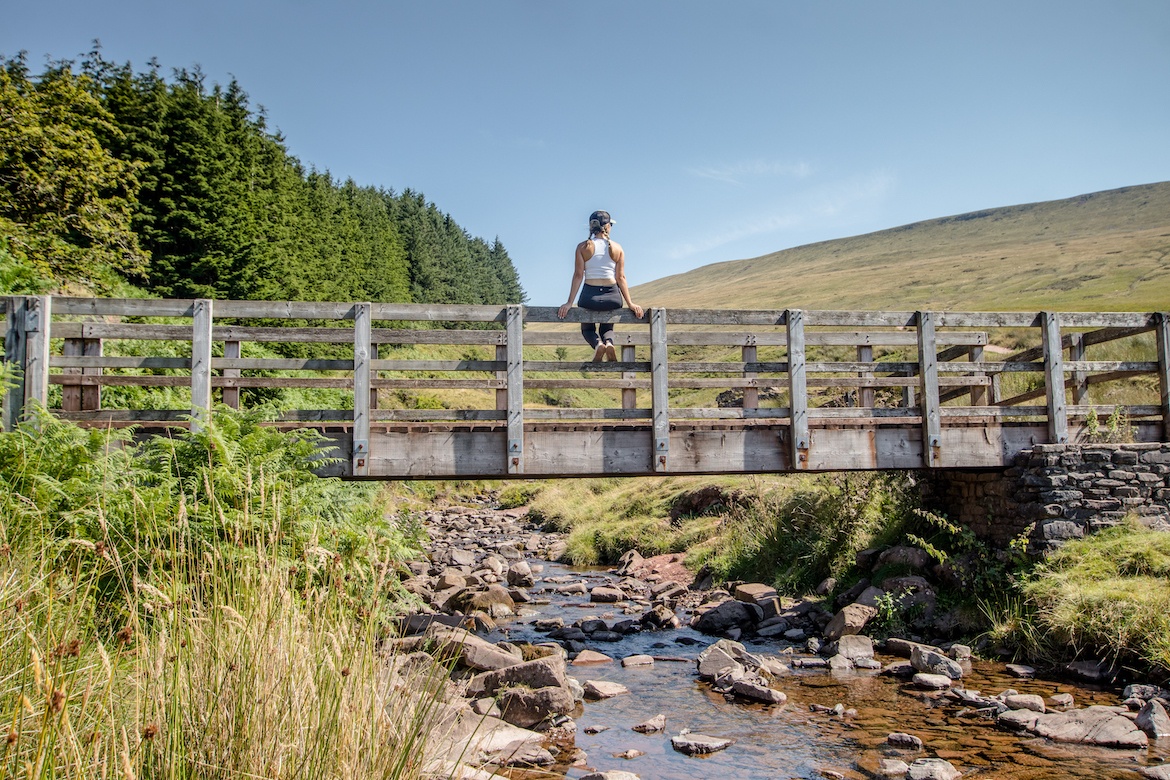 Park in the lot near the Storey Arms Outdoor Education Centre, which is off the A470 (see map above) and right at the base of the trailhead. There are also portable toilets onsite.

The Pen y Fan hike starts by walking along a wooden bridge that crosses over a meandering creek, and it’s impossible to miss the trail which has a gentle slope all the way up. It’s completely exposed (be sure to bring lots of water and sunscreen on a hot day), which means vantage points in every direction of wildflowers, steep ridges and animals like horses and sheep. 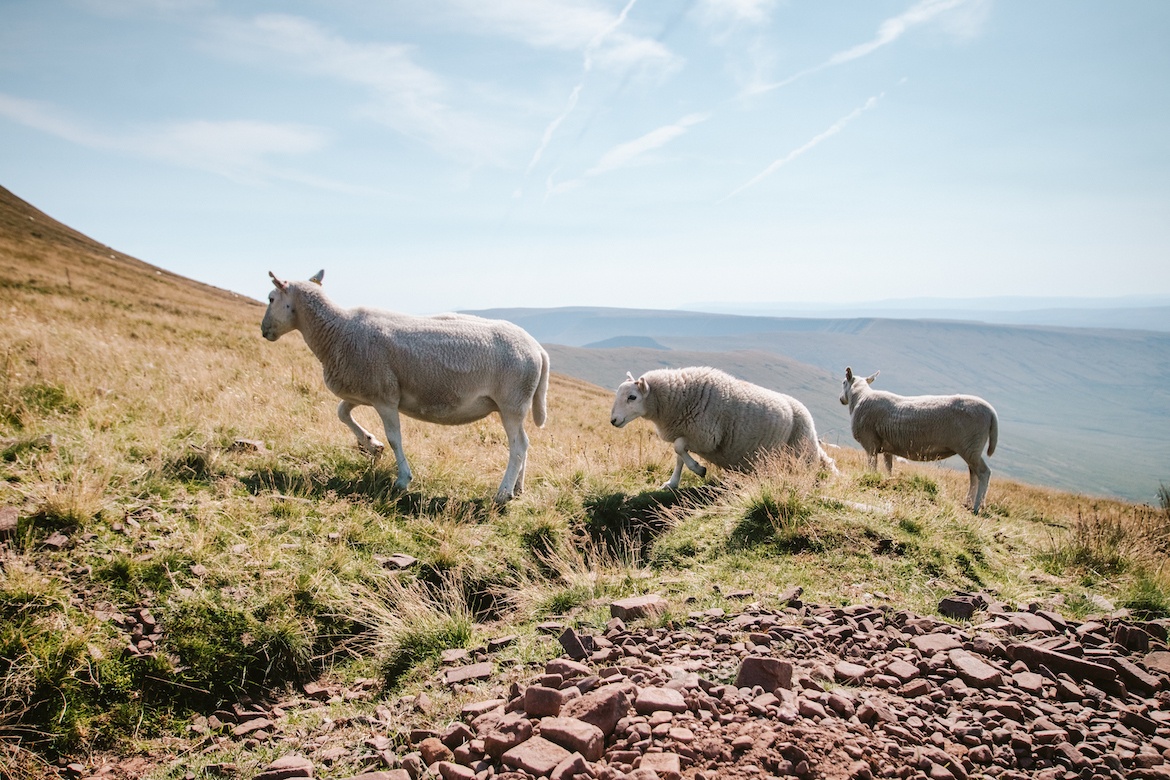 Once you make it up to the top of the ridge, a marker surrounded by stones notes your achievement as you soak up the panoramic views of surrounding ridges, valleys and alpine lakes. 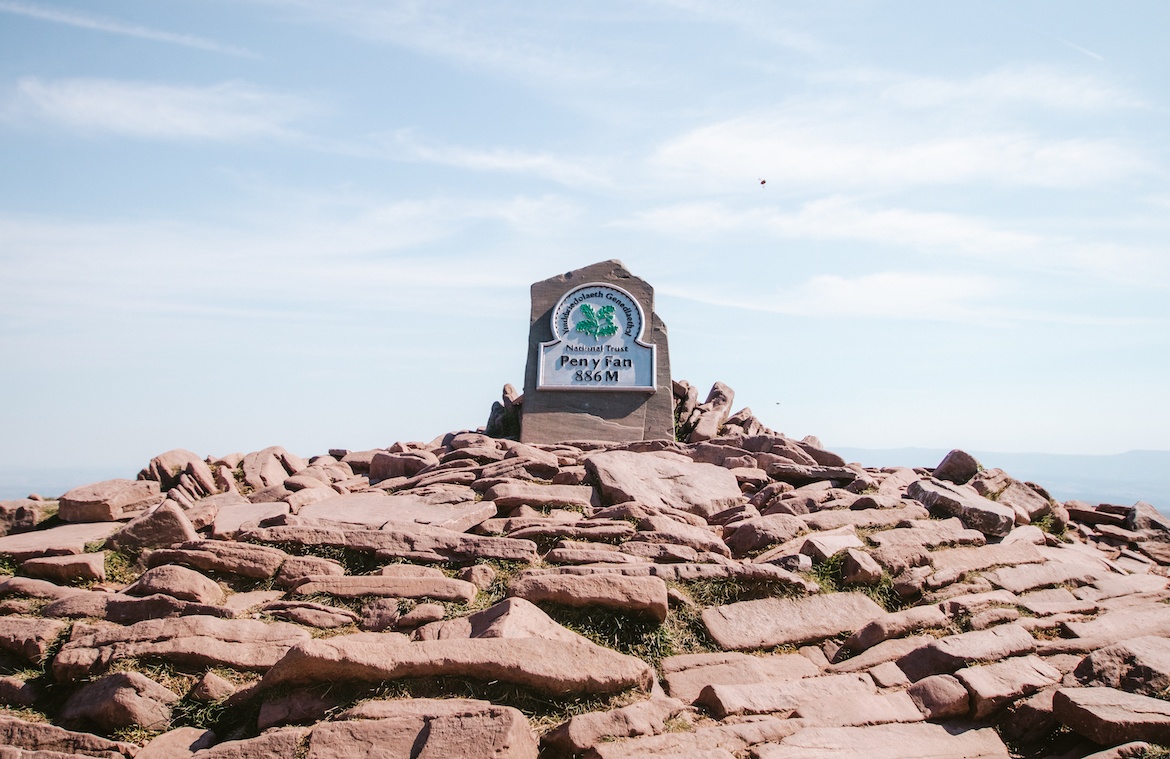 The summit of Pen y Fan

While it only takes about two hours round trip, those up for more adventure can extend their time on Pen y Fan Mountain by heading over to the nearby summit of Corn Du, or adding on the Horseshoe Ridge hike across the Welsh moorlands. That circular route takes about five hours, and hits the summits of Corn Du, Pen y Fan, Cribyn and Fan y Big. 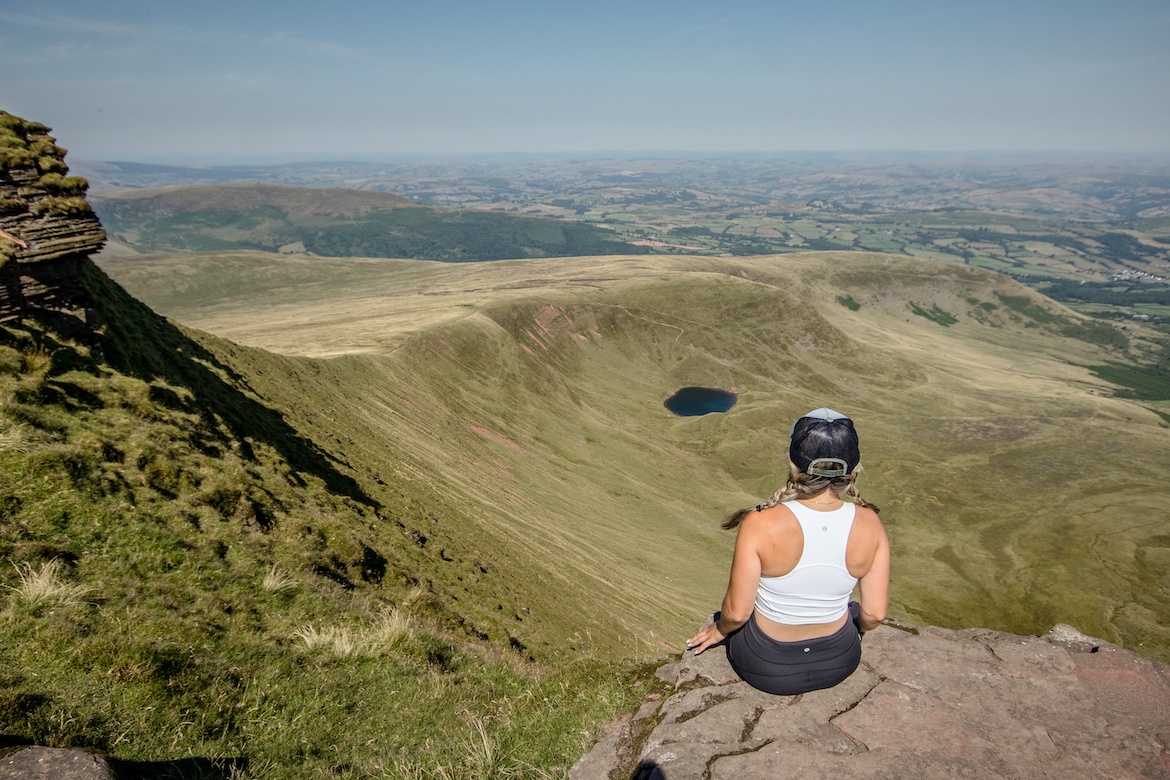 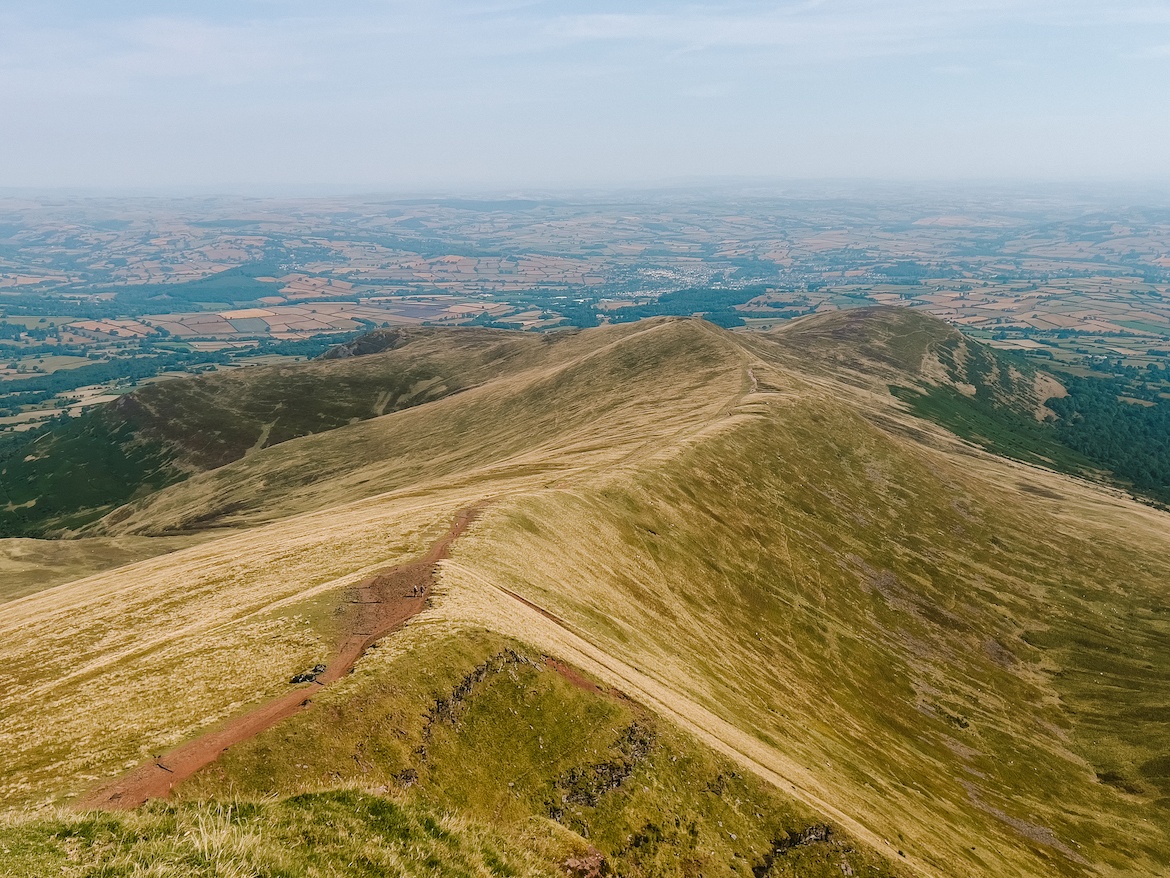 Book one of these guided Pen y Fan walks:

The Pen y Fan walk can also be done in the evening to walk the sunset over Black Mountain, and head back down at twilight to see the stars and galaxies shining brightly overhead: 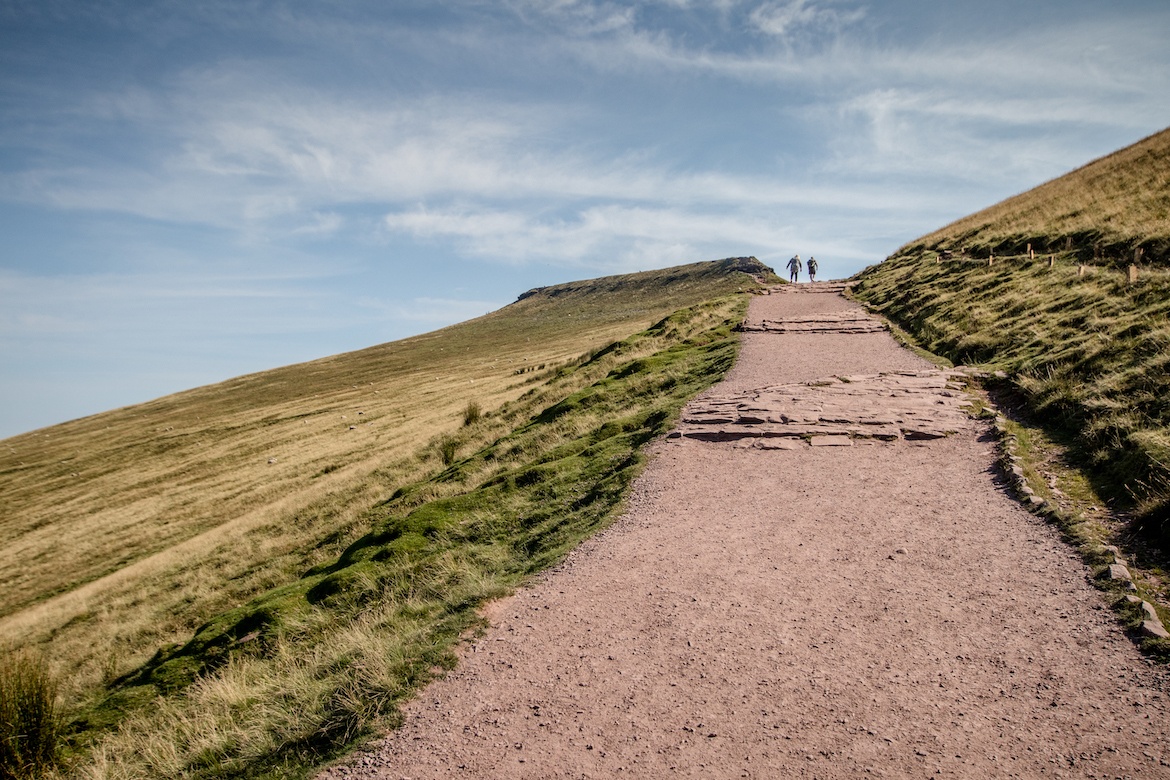 Just 30 minutes down the road from Pen y Fan is another one of the best things to do in Brecon Beacons National Park: the aptly-named Four Waterfalls trail in the heart of Waterfall Country. 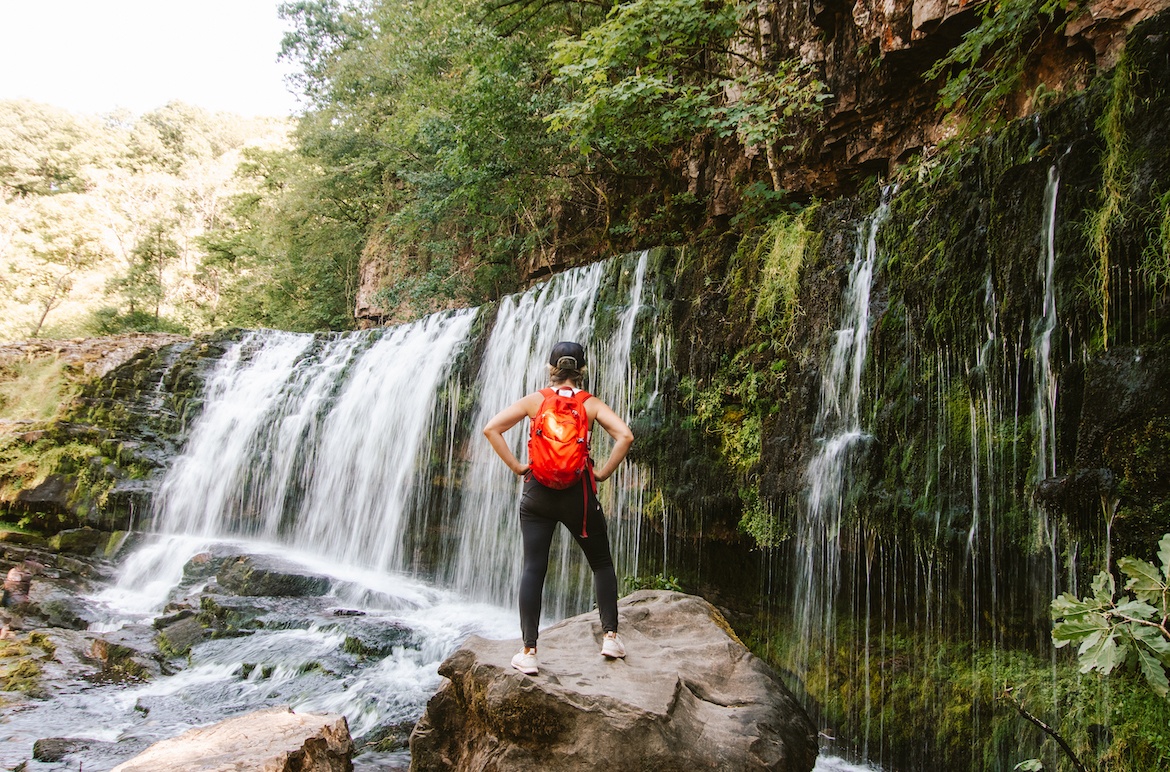 The four magnificent falls are called Sgwd Clun-Gwyn, Sgwd Isaf Clun-Gwyn, Sgwd y Pannwr and Sgwd yr Eira, and each one plunges down the cliffside into a gentle pool which is perfect for cooling off on a hot summer day.

Some visitors simply haul in their beach gear and stay put at one of the waterfalls for the day, while others opt to make stops at each of them. It takes about 3 1/2 hours to hike all four, which includes several steep staircases, scampering over rocks and some doubling back since the topography doesn’t allow the trail to be a loop. 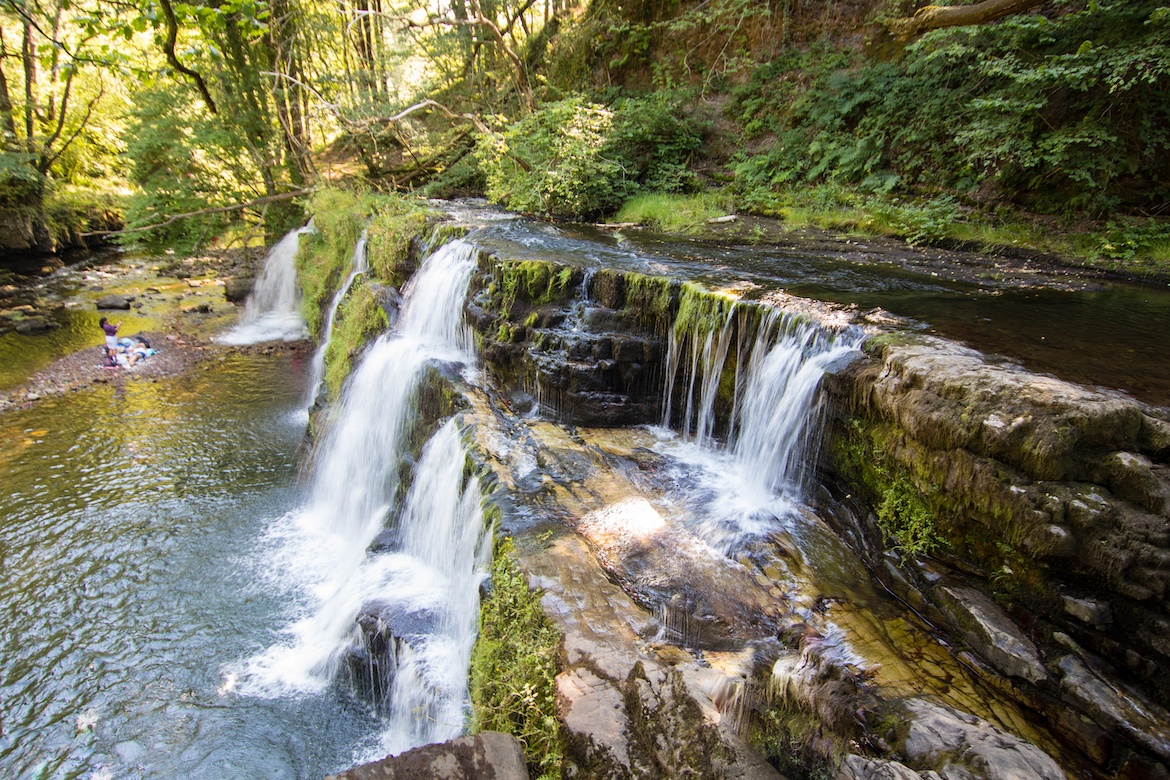 While the trail is well marked, it’s worth snapping a photo of the map at the entrance to help keep you en route throughout the day since there are quite a few spots where trails branch off.

The closest one to get to on the Four Falls Trail from the parking lots is the two-tiered Sgwd Clun-Gwyn (Fall of the White Meadow), which has a naturally-formed flat terrace so you can nearly walk right under the top of it. 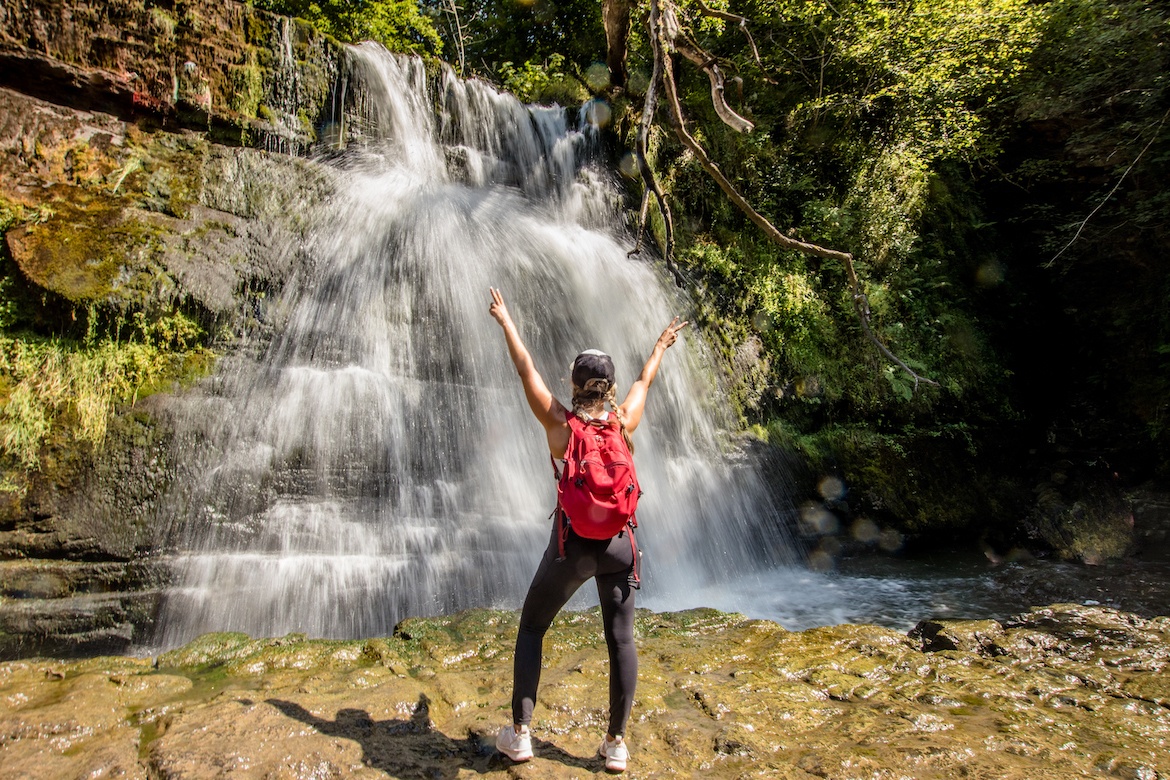 There are a few different parking areas depending on how far you’d like to hike. Gwaun Hepste car park is one of the best marked and also has a picnic area, but it’s actually the farthest one from the falls and requires walking through a wooded area before getting to the trail.

Instead, try to nab at spot at the Comin y Rhos lot; there are also a few free spaces on the side of the road near the gas station. 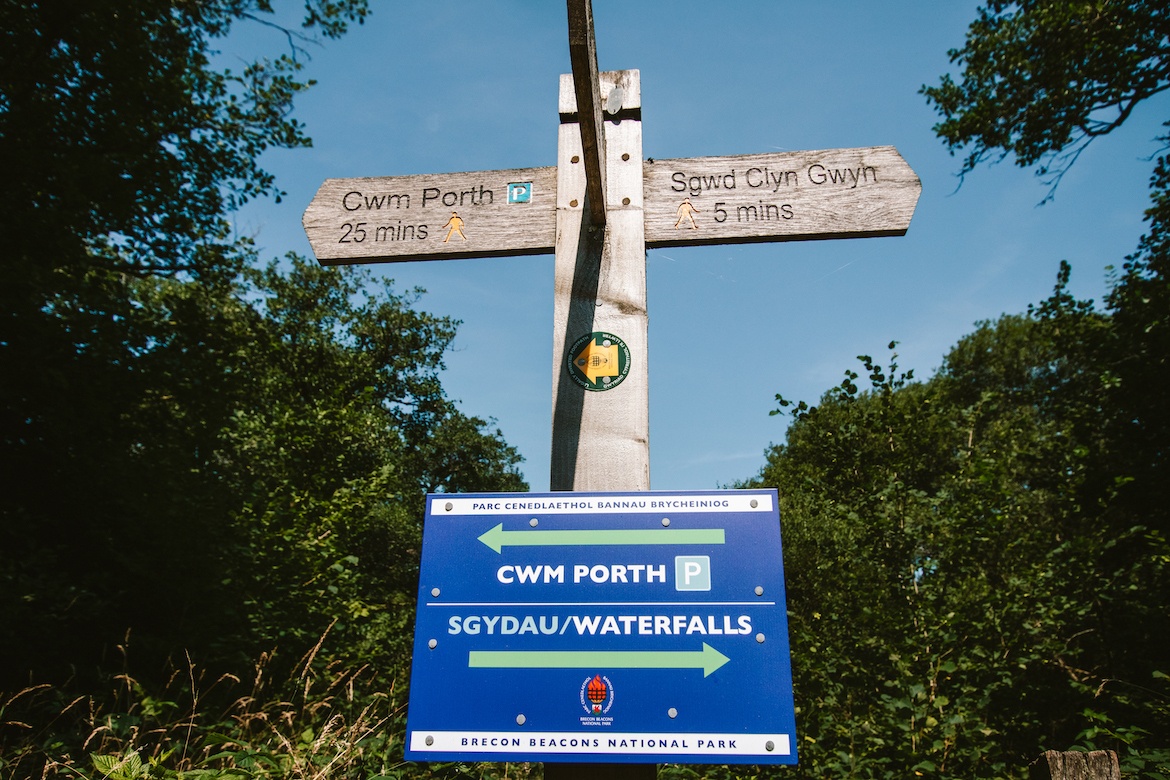 More things to do in Brecon Beacons National Park

Those who have more time to spare after their Brecon Beacons walks can check out some of the other fun activities in the park, like learning about the limestone cave systems which date back some 300 million years.

The best way to explore them is by booking a tour, where you’ll slip on a wetsuit and go gorge-scrambling with an experienced guide through the streams and waterfalls and even try cliff-jumping.

For another unforgettable experience, book a hot air balloon ride and soar over the Usk Valley with a glass of champagne in hand; a sunset flight is the ultimate way to see Brecon Beacons National Park from above. 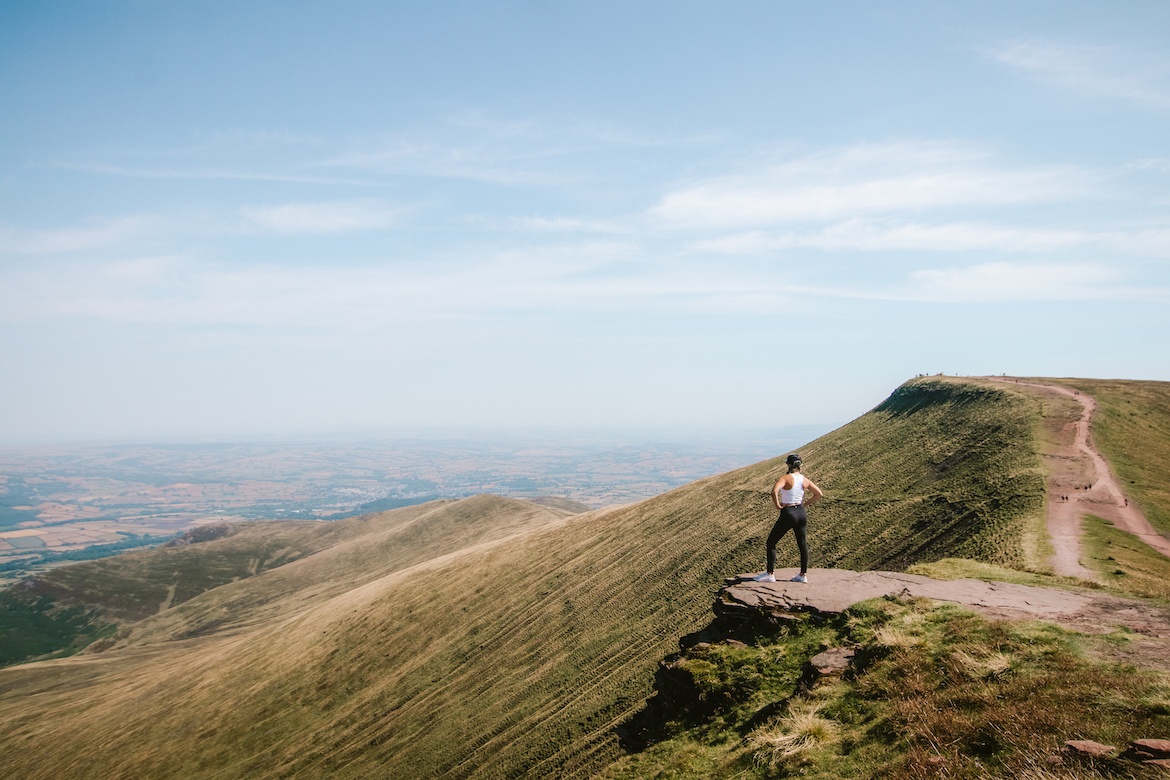 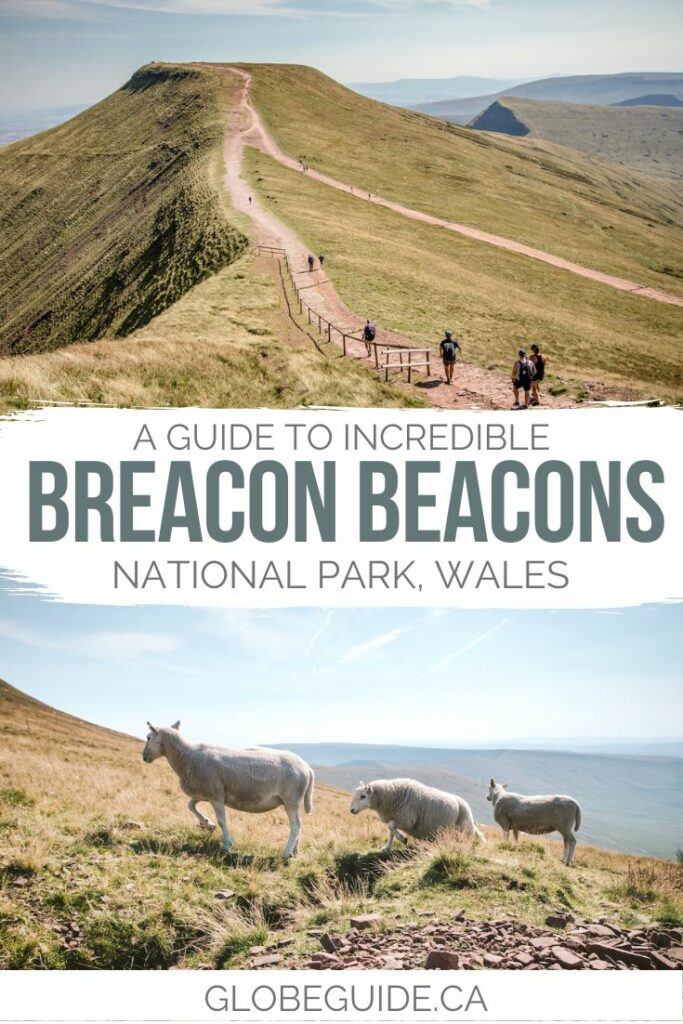 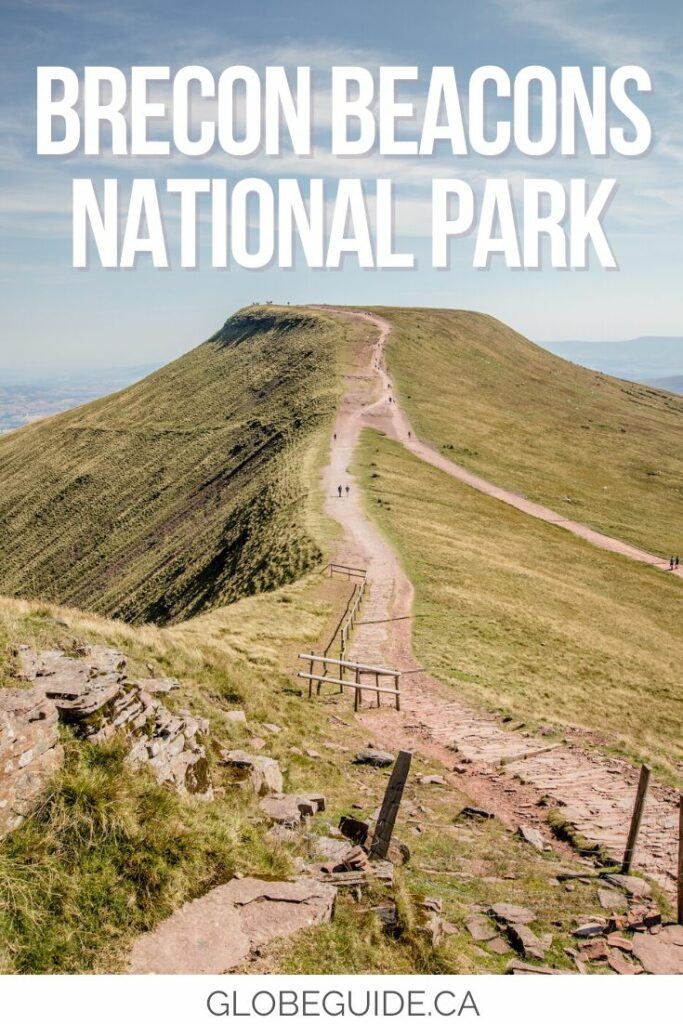 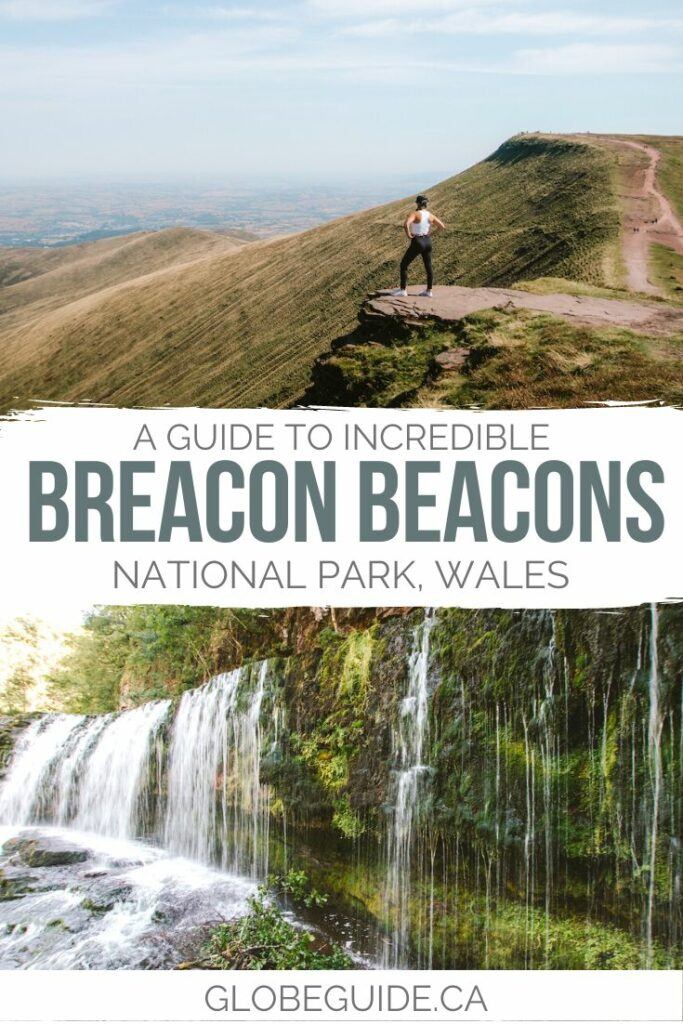