The ultimate itinerary for 2 days in London 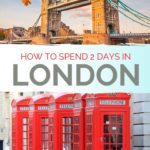 As one of the world’s oldest, most historically significant and iconic cities, it’s no wonder London, England is also hugely popular with travellers. Whether it serves as the start of a backpacking trip around Europe, the gateway to exploring the UK or simply a stopover en route to far flung destinations, it’s inevitable that jet setters end up here at some point. 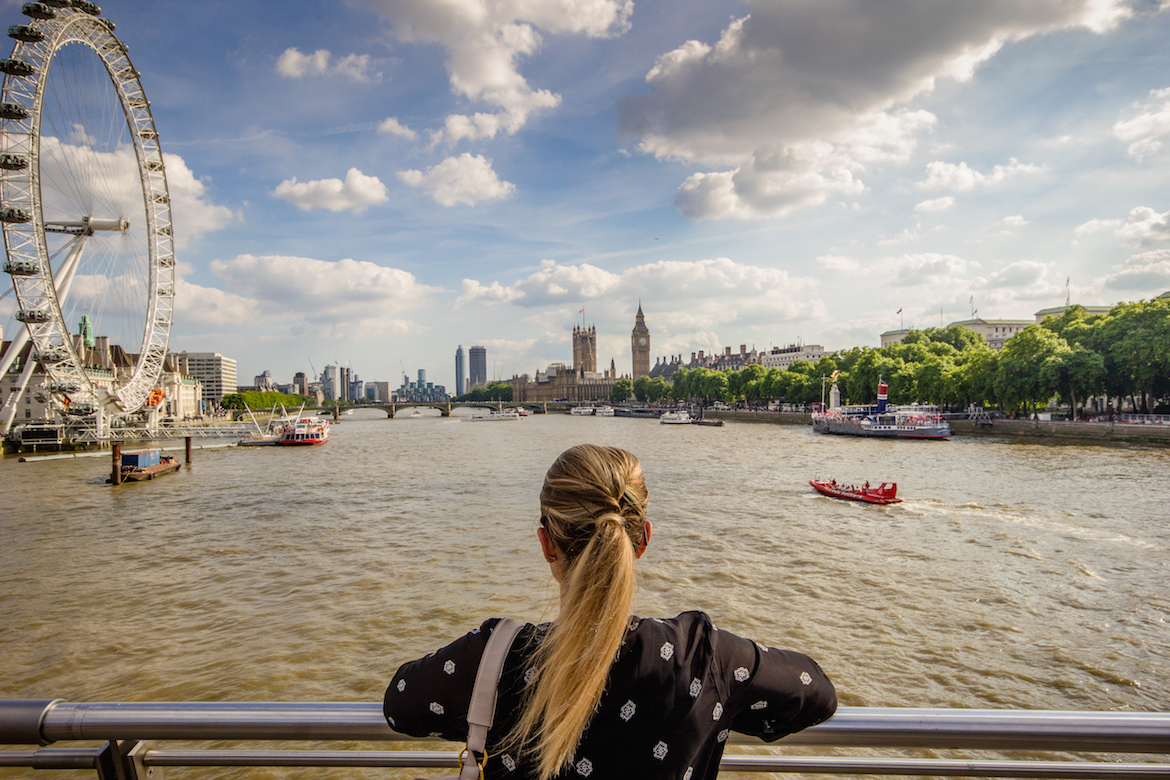 However, cramming everything onto your London itinerary is no small feat, what with its countless landmarks, museums, bustling markets, expansive gardens, towering monuments and palatial palaces. In fact, even those who live here will tell you they’re still happening across new spots every day, whether it’s a gentrified neighbourhood, hot restaurant or pop-up art space. 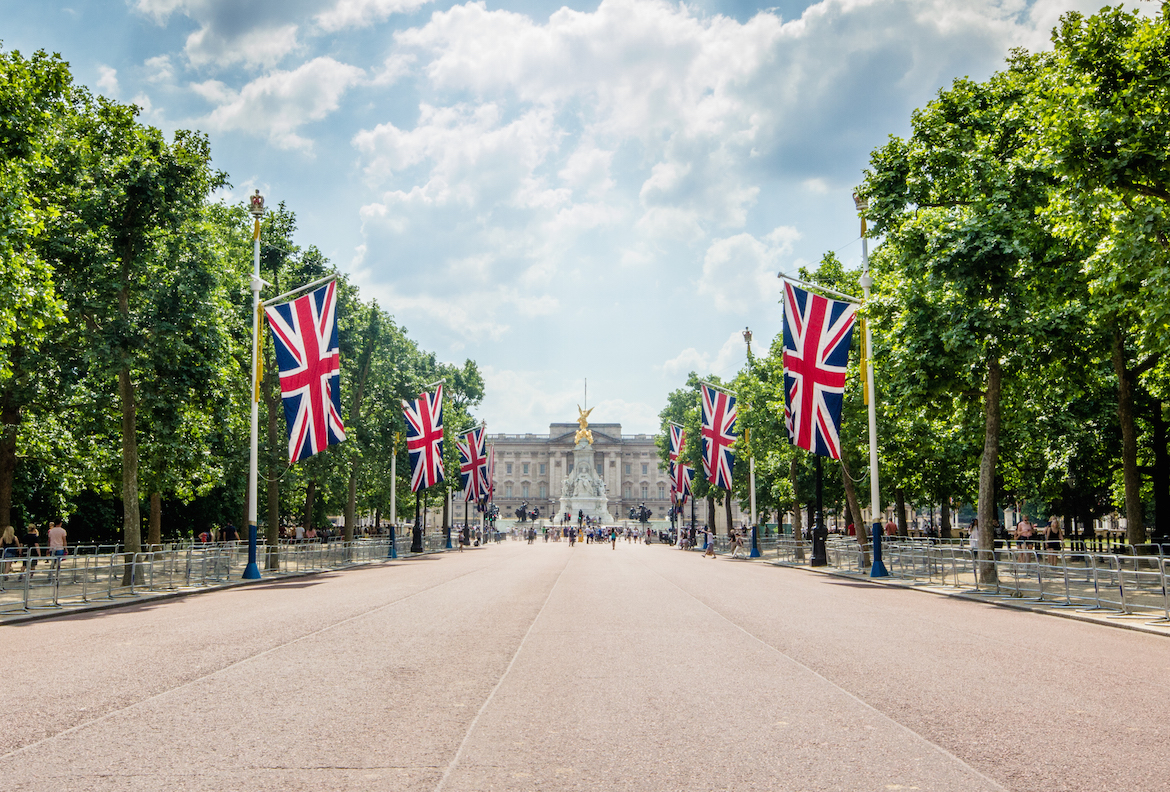 The best way to visit the city as a first-timer is to come to terms with the fact that you’ll never see everything, so you might as well start with the most popular landmarks so you can cross them off the list and seek out lesser-known gems the next time you come back. With that in mind, here’s how to make the most of only two days in London. 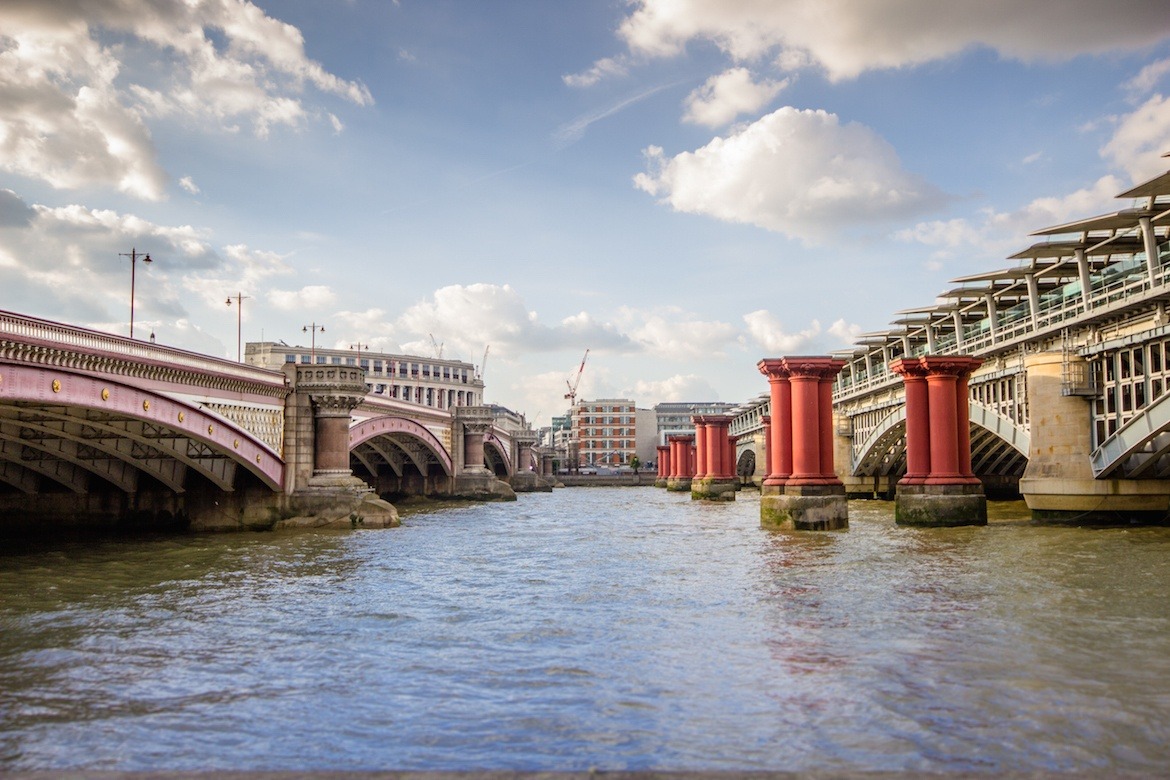 Most of the top things to see in London in 2 days are easy walking distance from Buckingham Palace, so kick off your visit there in royal fashion. During summer, the regal State Rooms are open to visitors who are curious to see the interior. Otherwise, you can explore the sprawling grounds which includes highlights like the Victoria Memorial and Canada Gate, and should try to time your arrival for the Changing of the Guard. 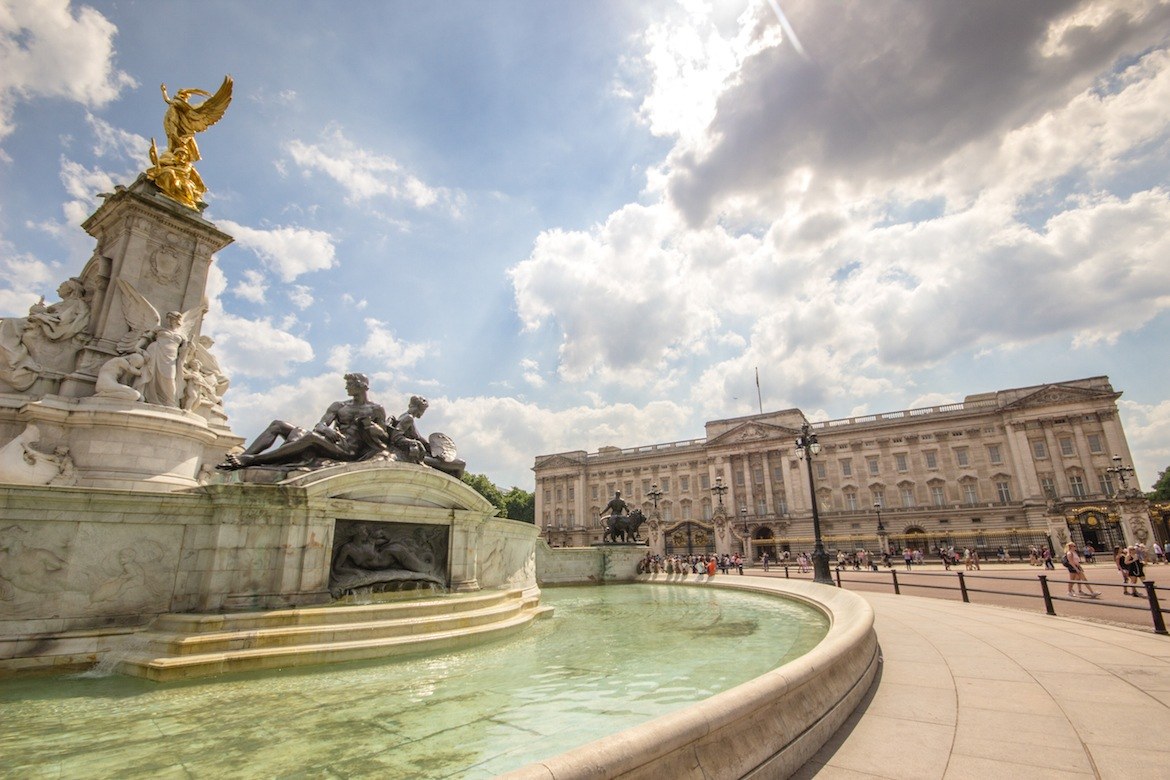 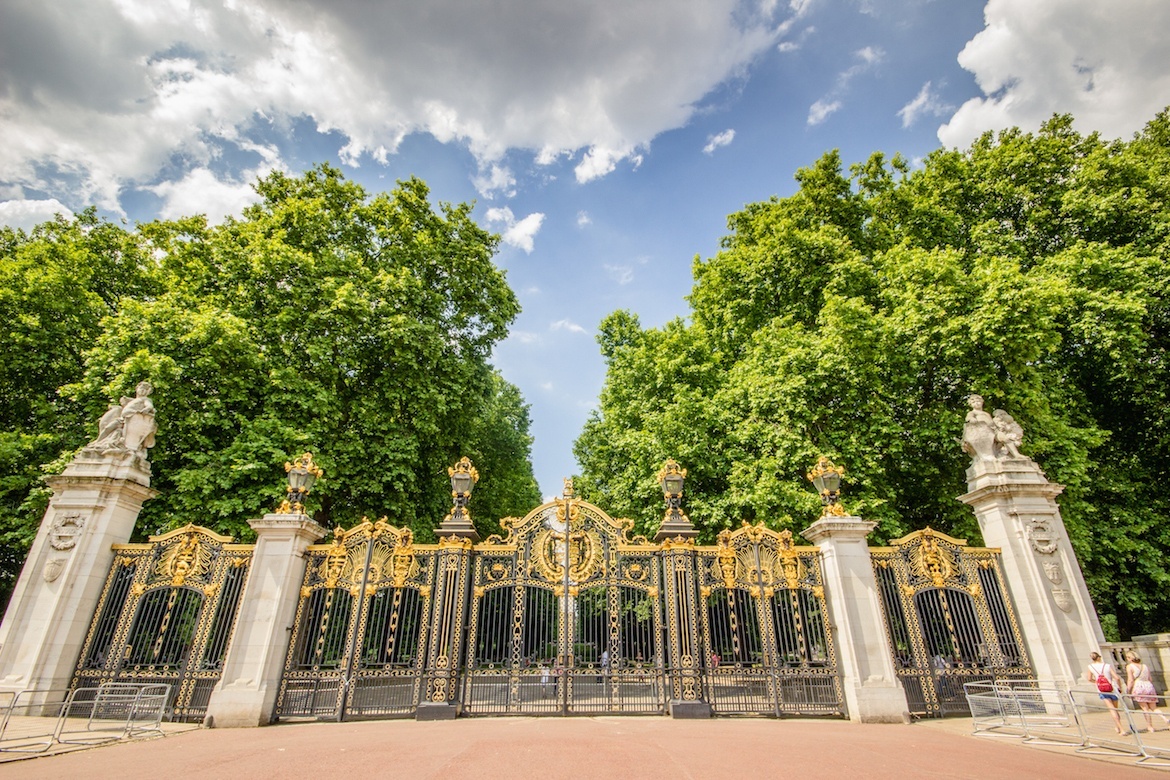 Wander down The Mall which runs parallel to leafy green St. James’s Park, and passes under the stately Admiralty Arch to Trafalgar Square. The pretty plaza is anchored by the grand National Gallery, and visitors love the fountains and towering Nelson’s Column. 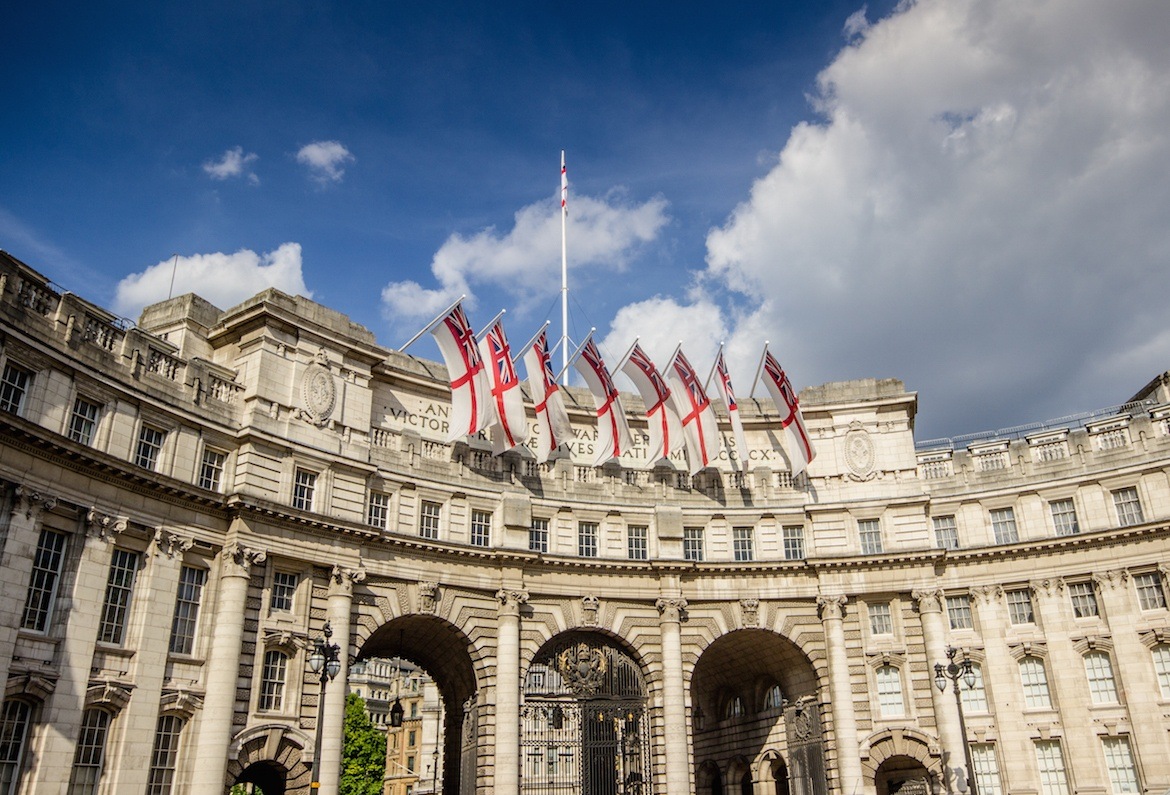 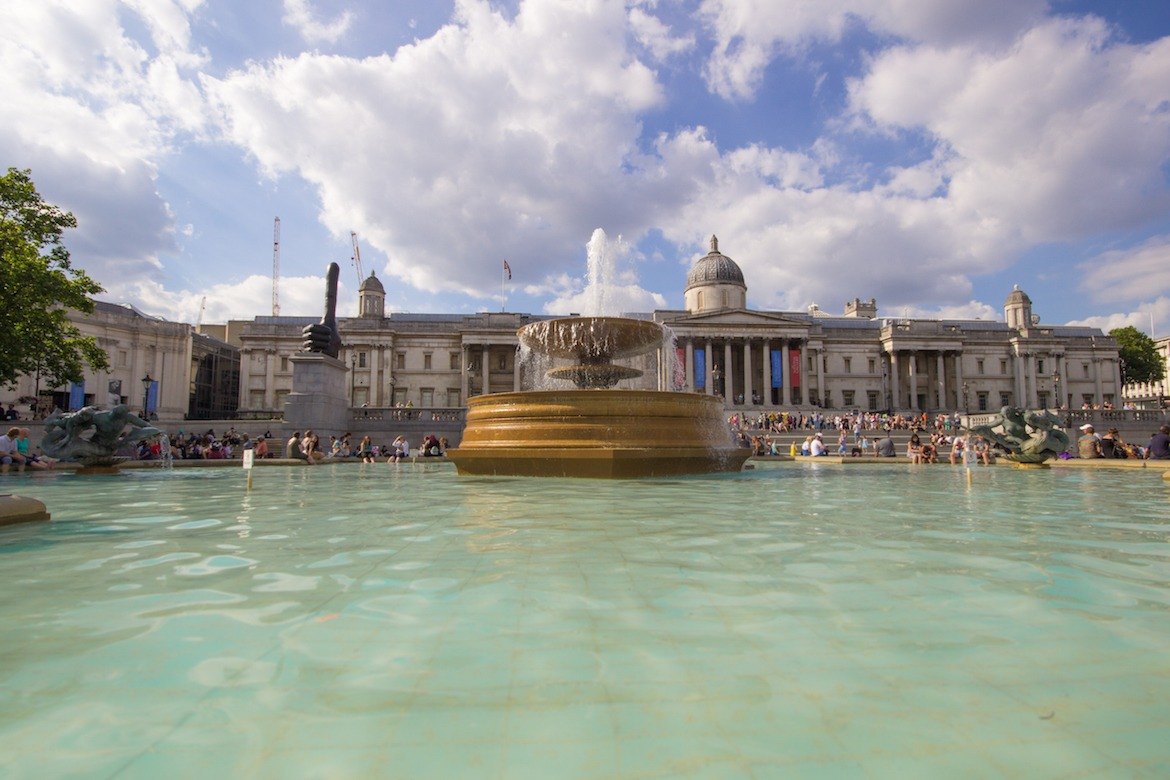 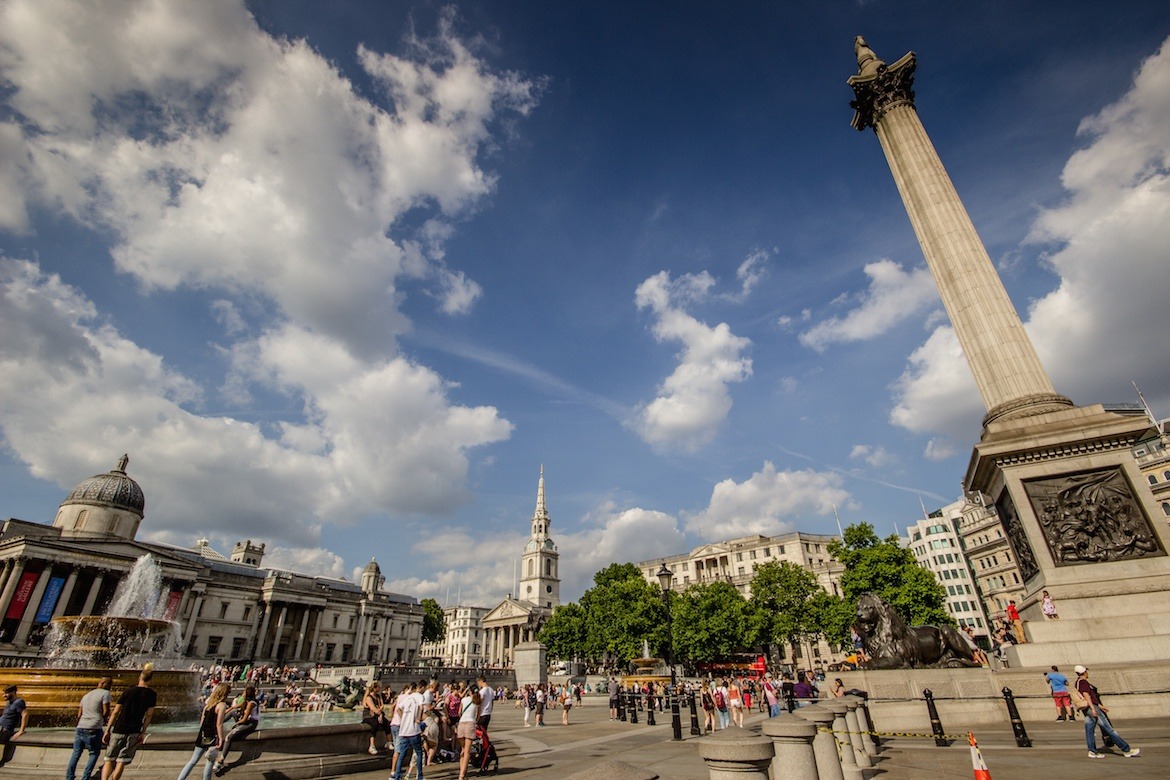 Continue up the Strand and make a quick detour into Covent Garden, which is actually a shopping district—not a park as its name would suggest. Beautiful sandstone buildings hold trendy shops like Burberry and Chanel, alongside independent boutiques and plenty of dining options which make it the perfect place to grab lunch. 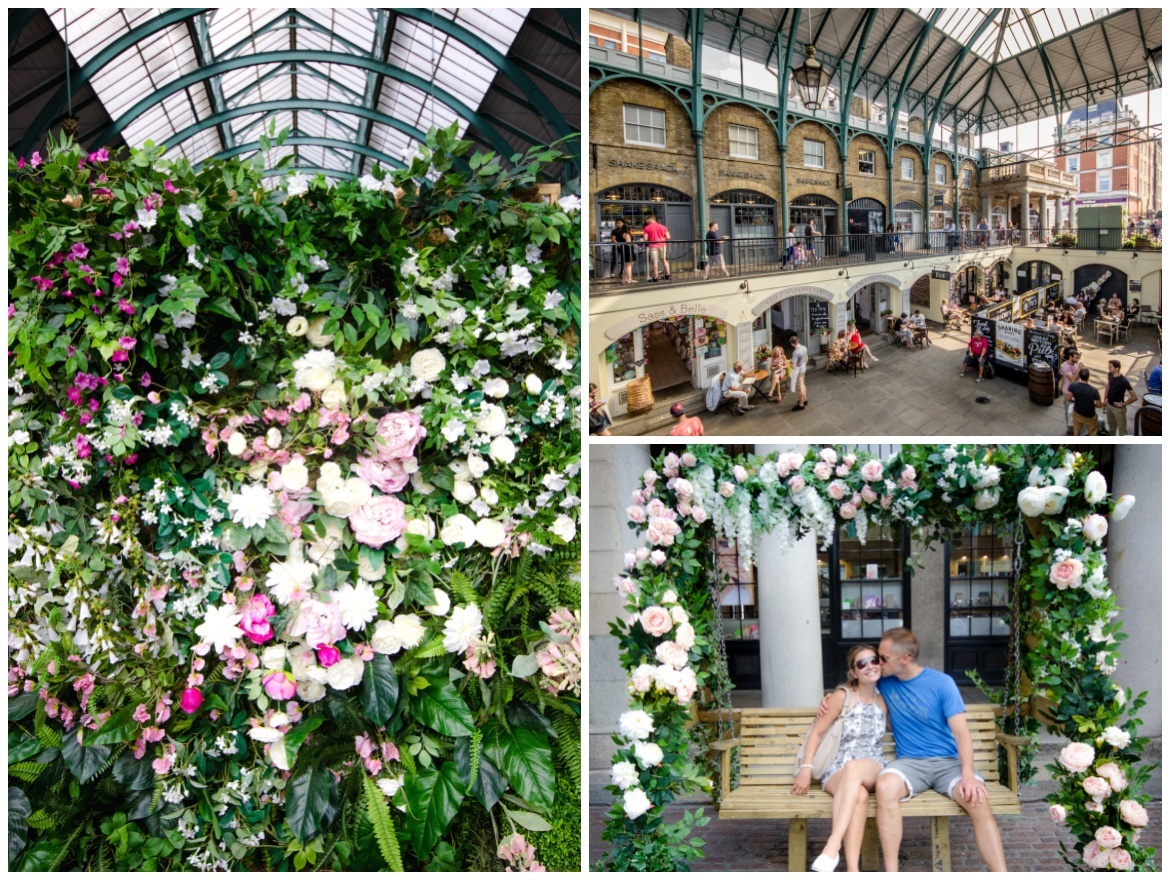 The next stop as you make your way back down the Strand toward the River Thames will be familiar: Parliament Street, accented by Big Ben himself. Famous spots in this area include the prime minister’s residence 10 Downing Street, the parliament buildings and Westminster Abbey where Will and Kate—as well as plenty of other royals—tied the knot. 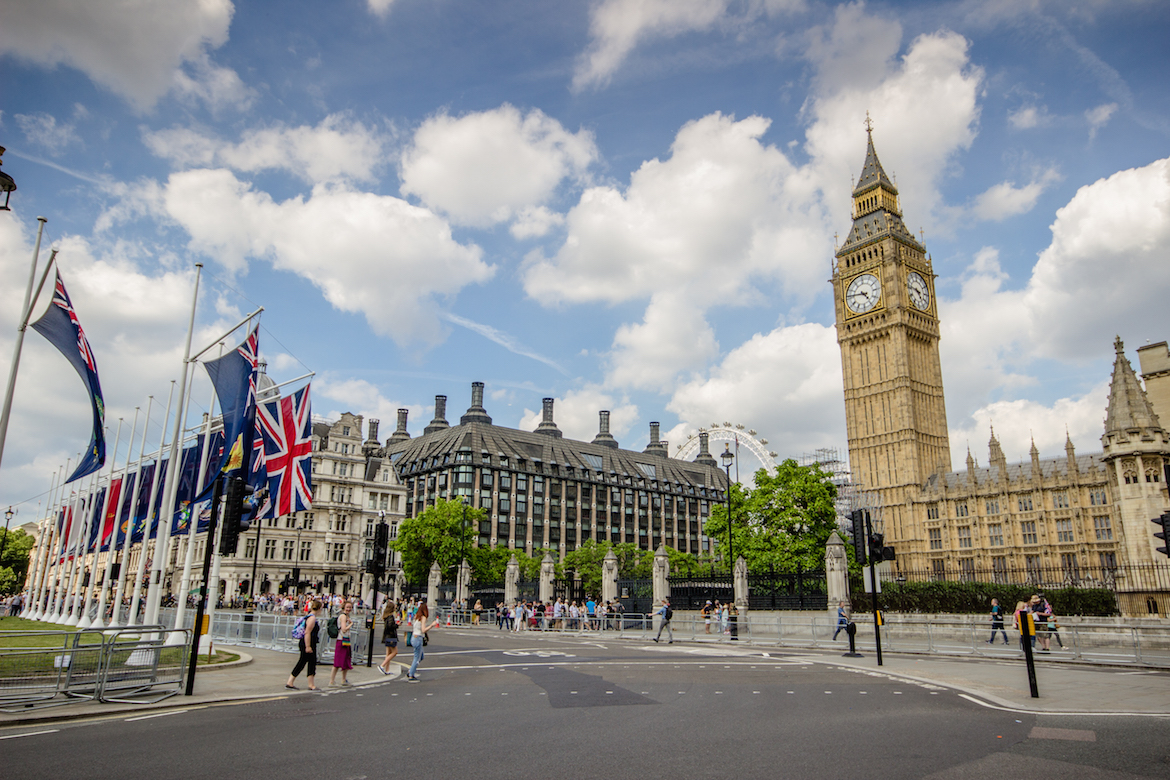 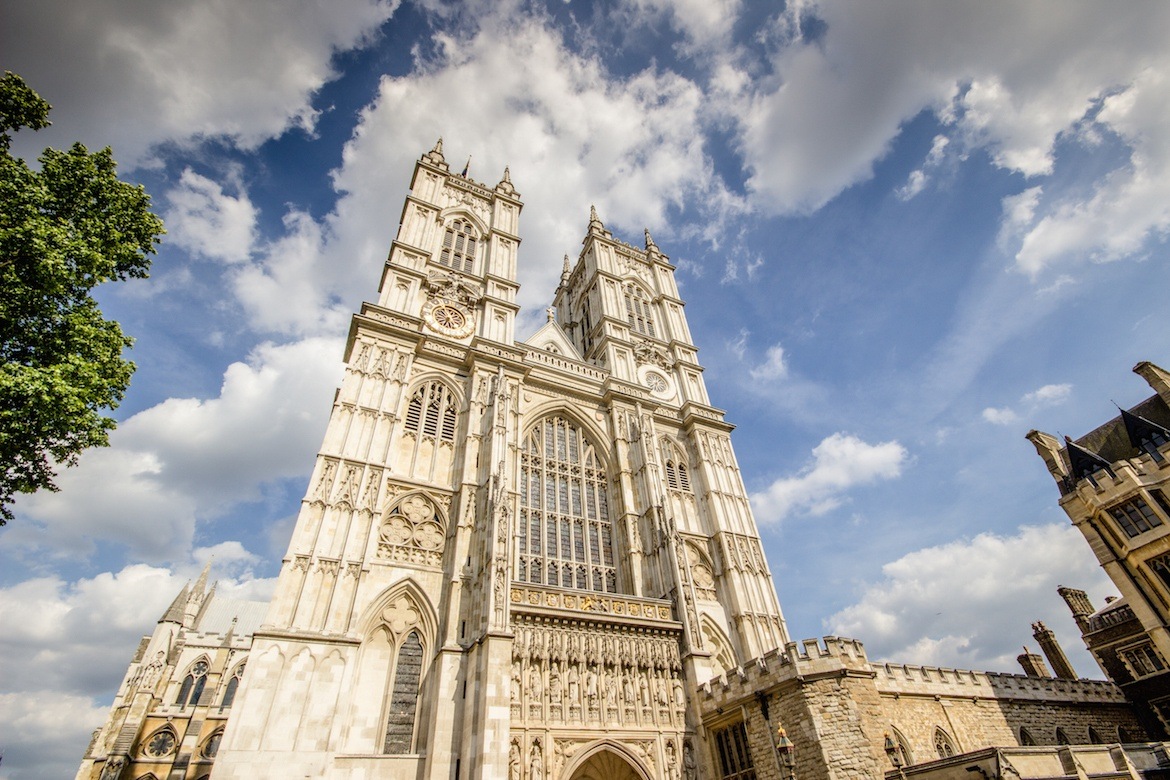 Enjoy the waterfront views at the Westminster Bridge, stop at one of the food markets, and make your way across to the gargantuan London Eye. The ferris wheel is nearly 500 feet tall, and its clear domes reveal a birds-eye view of the city below. Queues can be long during high season, so spring for a fast-track ticket to jump the line (especially if you’re exploring London with young ones) or go all out and enjoy some bubbly by reserving their Champagne Experience.

Tip: If you don’t have time for the ride or don’t feel like shelling out for it, there’s another way to enjoy a panoramic view of the city for free…continue reading to find out how! 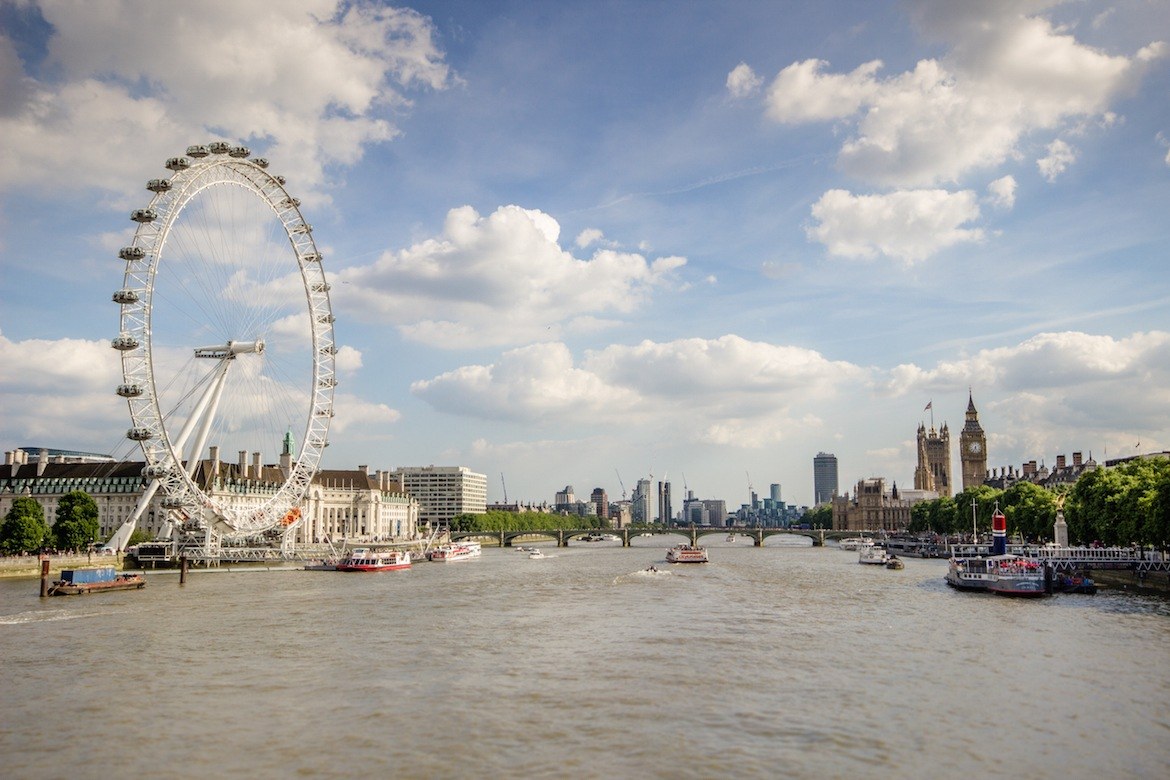 Looking at the River Thames

Since you’re probably tired of walking by now, hop on one of the boats anchored along the river bank and enjoy a cruise down the Thames (some also serve afternoon tea). Most last about 40 minutes, and will zip you along the waterway granting a unique vantage point of the main sights. Marvel at the crisp architecture of the Golden Jubilee footbridge as you glide under it, and keep your eyes on the shoreline as you pass the popular Southbank Centre (which has fantastic food stalls) and St. Paul’s Cathedral.

Tip: To save money, buy a London Pass which includes a hop on-hop off boat ride along with admission to many top attractions. 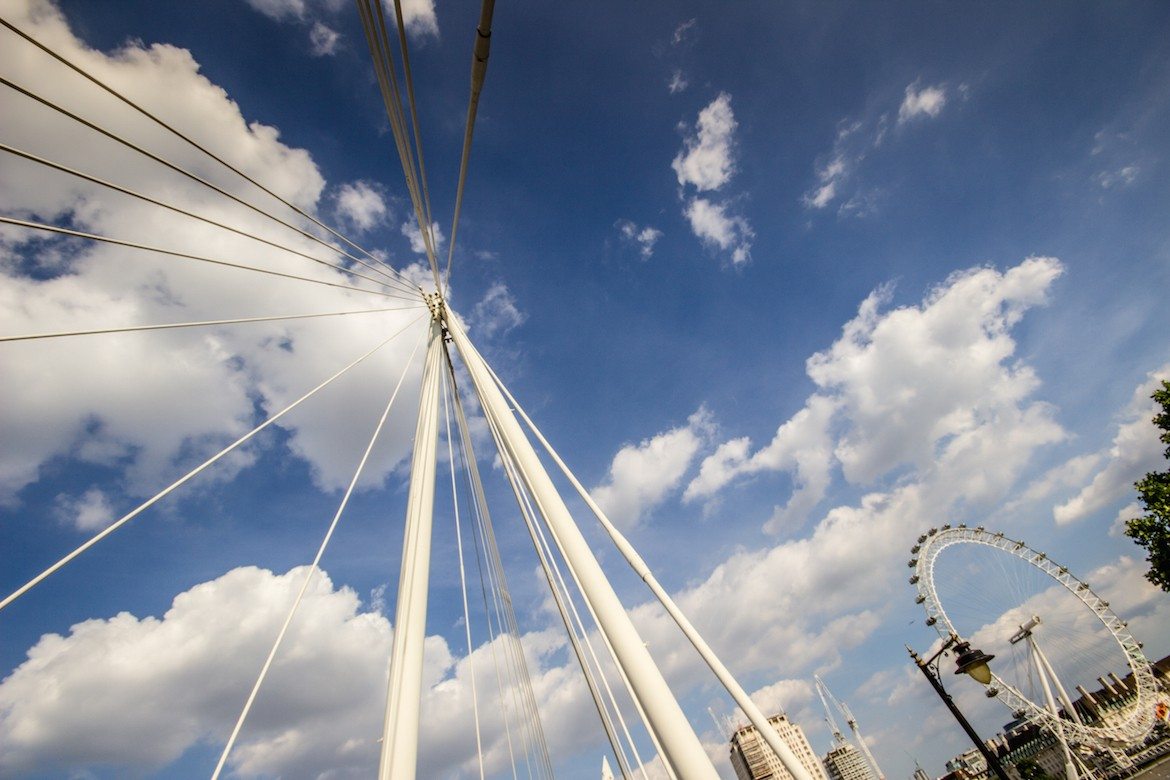 Hop off at the grandiose Tower Bridge, then finish your first day in London by watching the sunset from more than 60 stories up. You have two choices: The Shard or Sky Garden. The Shard bills itself as London’s highest and best view, which includes an open-air Skydeck and fabulous restaurants and bars. However, there’s a steep entrance charge—unless you’re savvy enough head to the 33rd floor instead. There, you can enjoy a cocktail at Hutong for less than the price of admission, and still enjoy the panoramic city views.

The other option is Sky Garden, which juts 155 metres above the skyline. The open-air terrace and observation decks make it a crowd pleaser, as does the fact that entrance is free. However, they limit the number of tickets per day which means you’ll need to book weeks in advance. Here’s a great side-by-side comparison of The Shard and Sky Garden to help you make up your mind about which one to visit.

RELATED: The best way to get to London from Heathrow

Start the second of your 2 days in London in quaint Notting Hill, which is a colourful kaleidoscope of shops, classic English pubs and adorable mews houses. Snap a token tourist photo of the Notting Hill Bookstore (sorry, chances are Hugh Grant won’t be inside), and browse in the shops before continuing to St. Luke’s Mews. Easily one of the cutest rows of houses you’ve ever seen, this hidden gem is what Instagrammers’ dreams are made of, and your camera will get a workout capturing the details of the pastel-hued homes.

READ MORE: Why St Luke’s Mews is one of the cutest London photo spots 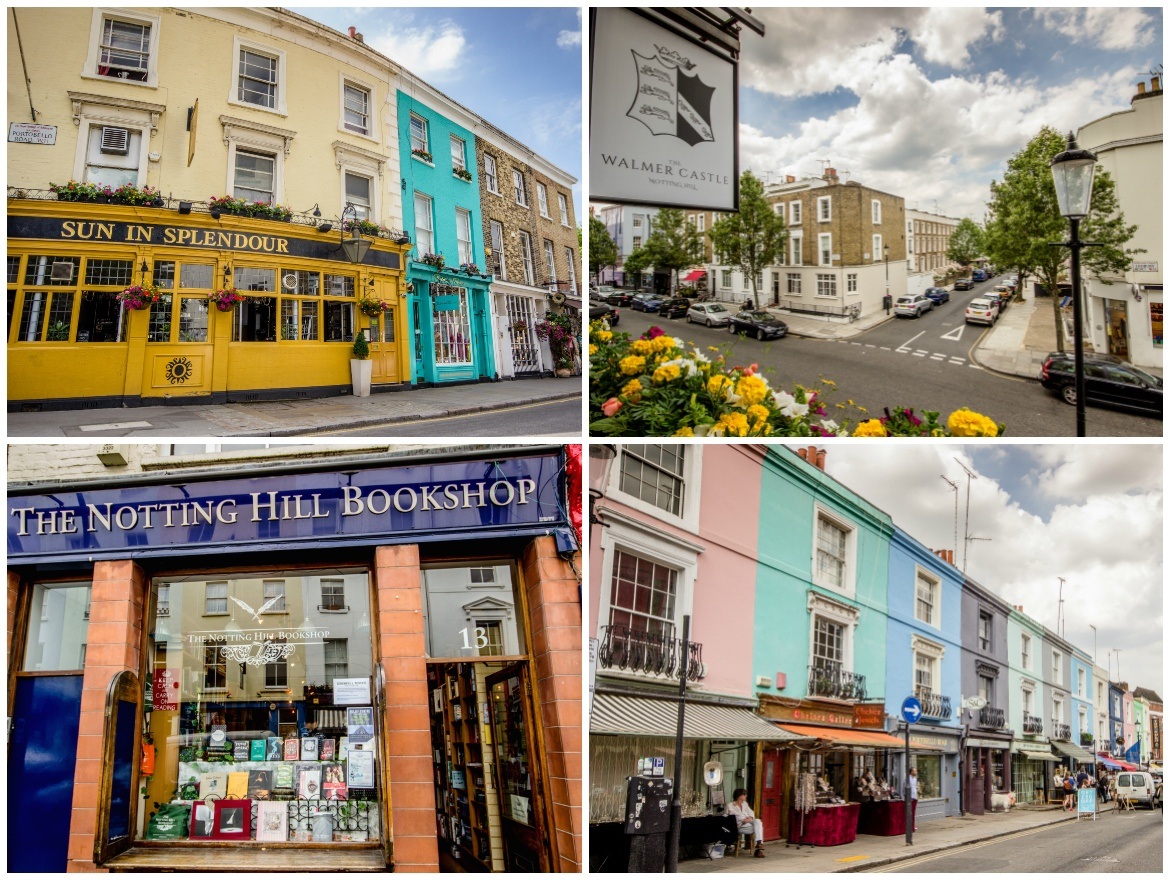 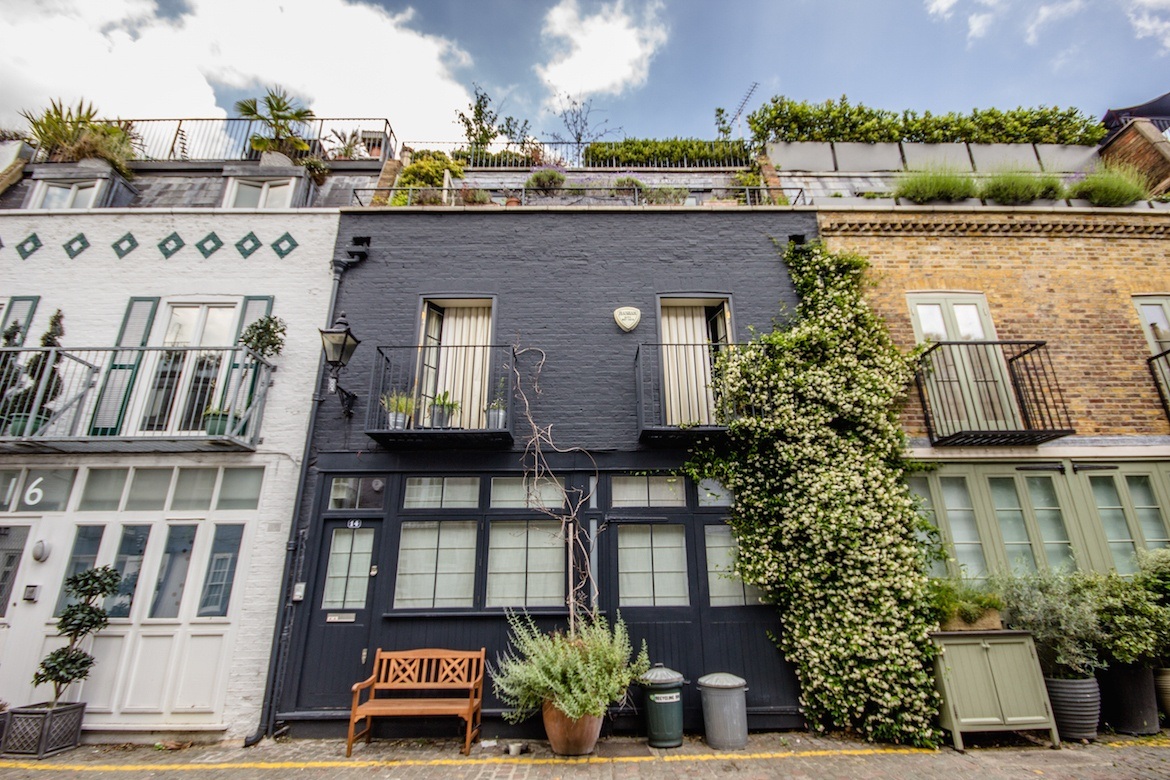 A short walk away is the aptly-named Little Venice, an area made up of canals which looks more like Amsterdam or Venice than a neighbourhood right in the middle of bustling London. Grab a drink at one of the cafes or bars along the water, stroll along the adjacent pathways under the shade of leafy green trees, or hop in a narrow boat for a canal tour that will see you navigate the tranquil waterways.

The walking tour continues by heading through the Paddington district, made famous by the children’s book character Paddington Bear. You can find a bronze statue dedicated to him on Platform 1 inside Paddington Station, then head back out to marvel at the area’s fancy houses and quaint English pubs decorated with flower boxes overflowing with bright blooms. 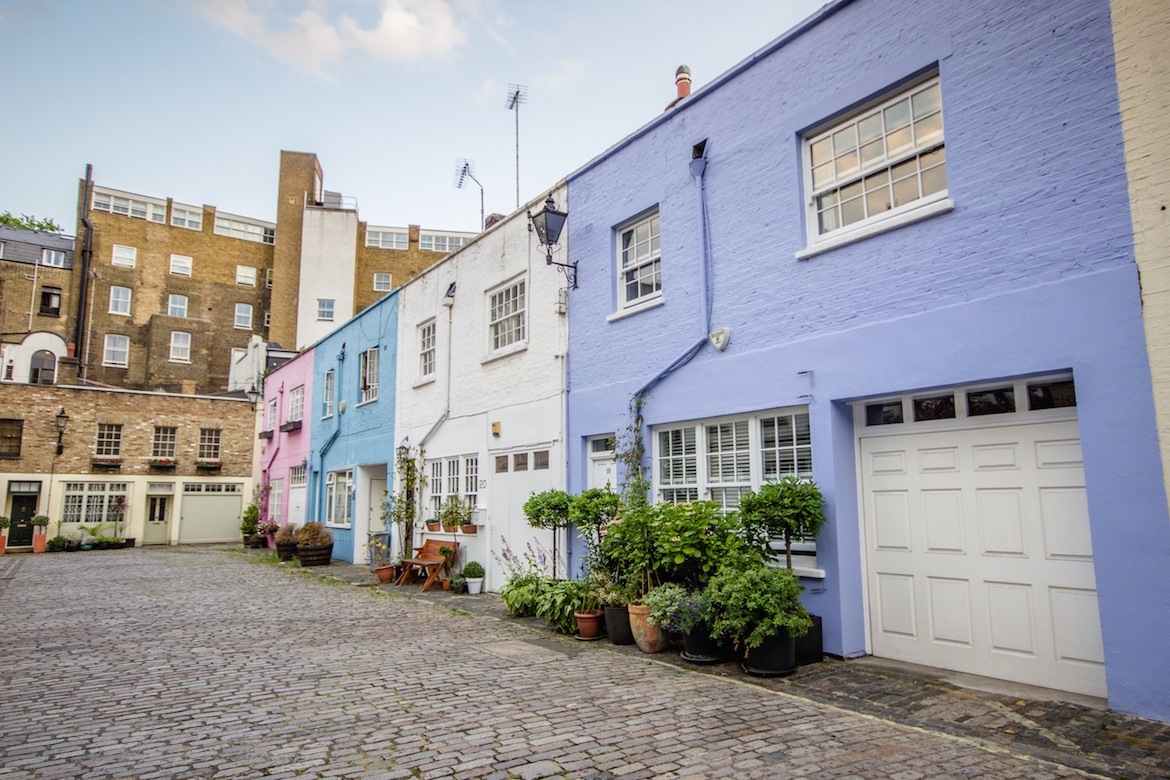 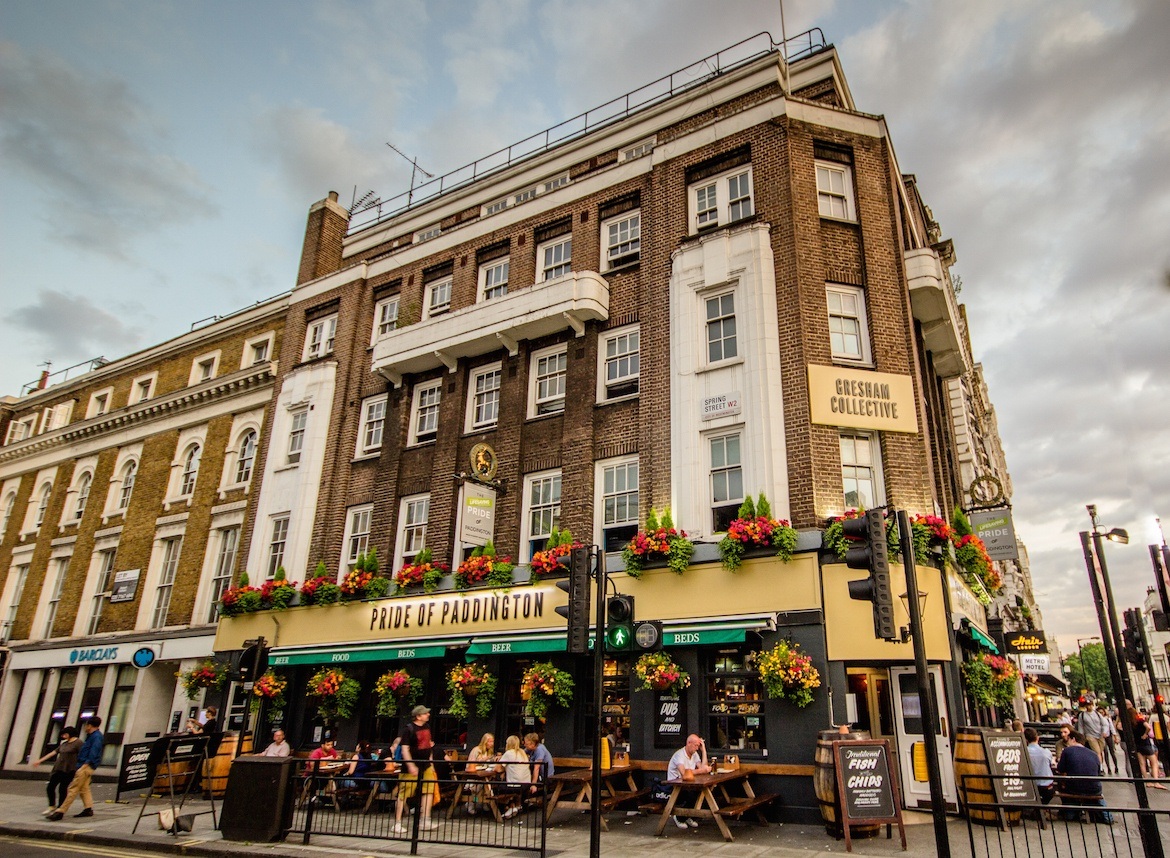 A cute pub in Paddington 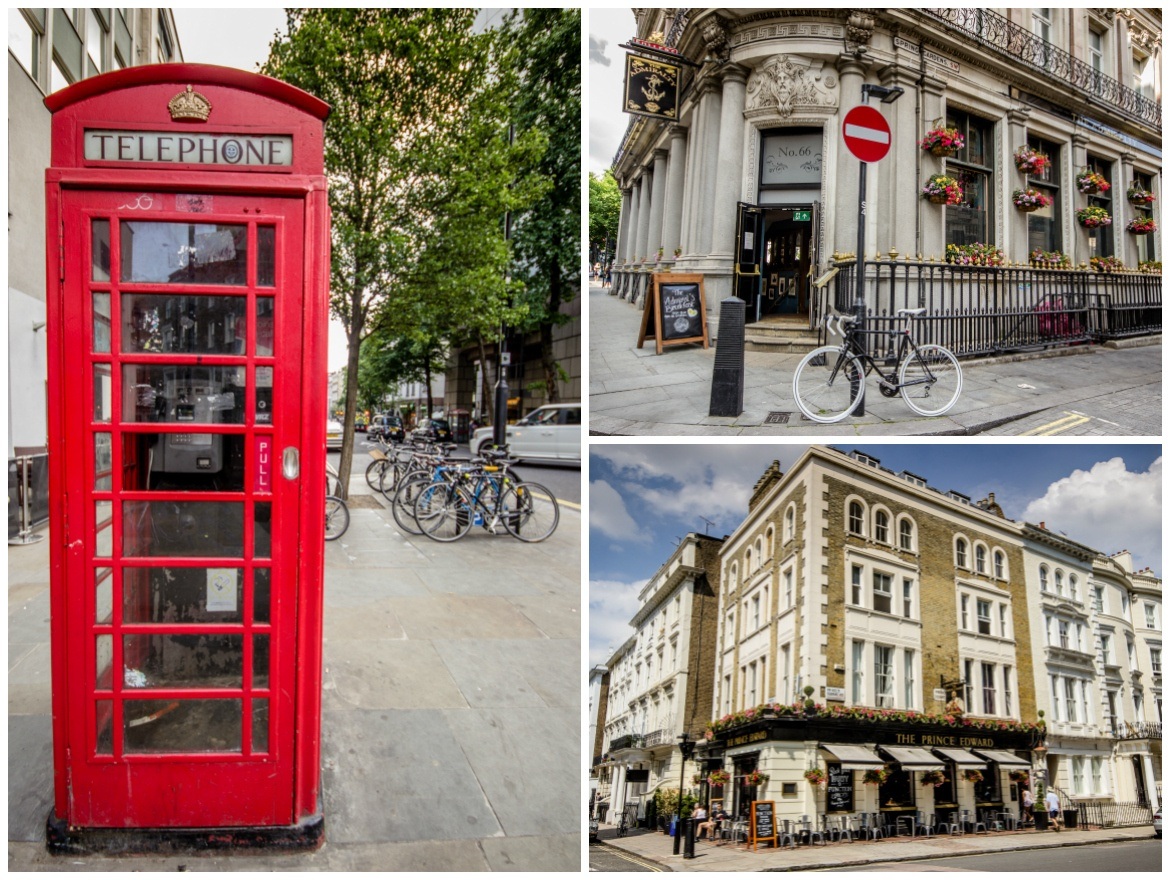 Head east to Marylebone, which fashionistas will recognize as the home of the iconic Selfridges department store. Marlylebone High Street is packed with great shops and restaurants, including The Marylebone pub which is a favourite stop for Instagrammers. If you’re lucky, you might even end up there during a summer fair, when the streets are closed off and it turns into an outdoor market complete with a petting zoo and amusement park rides for the kids. 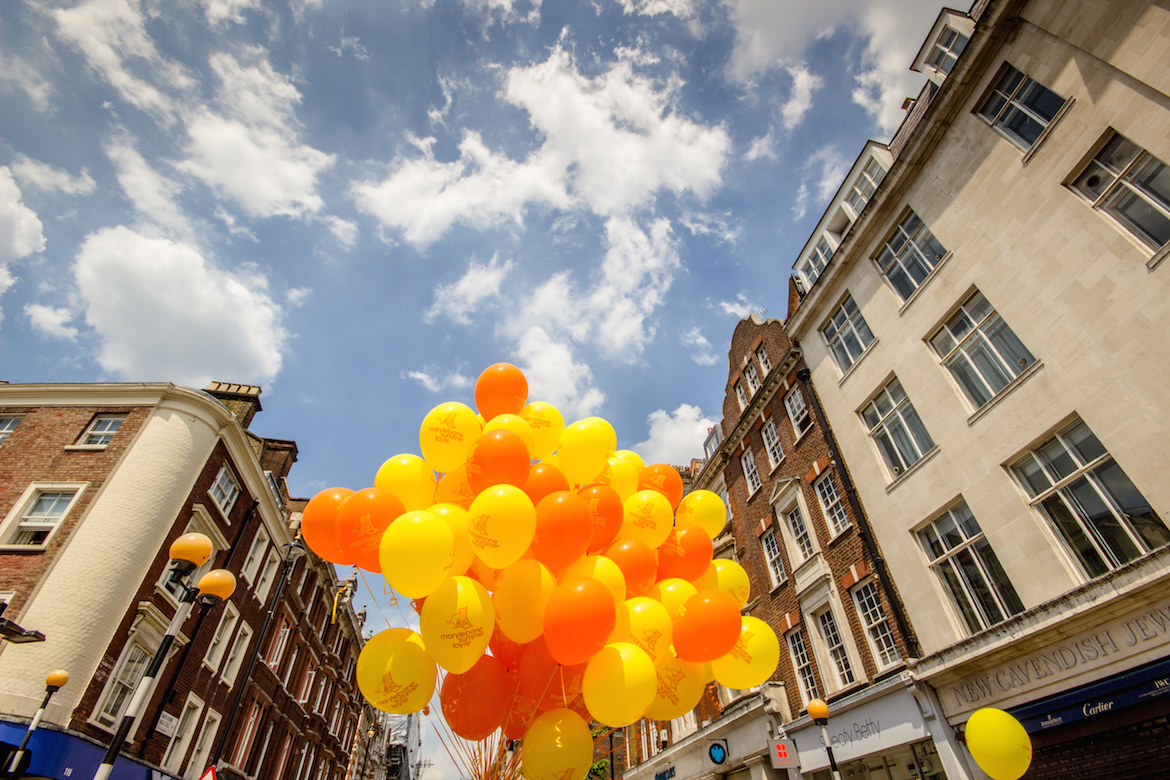 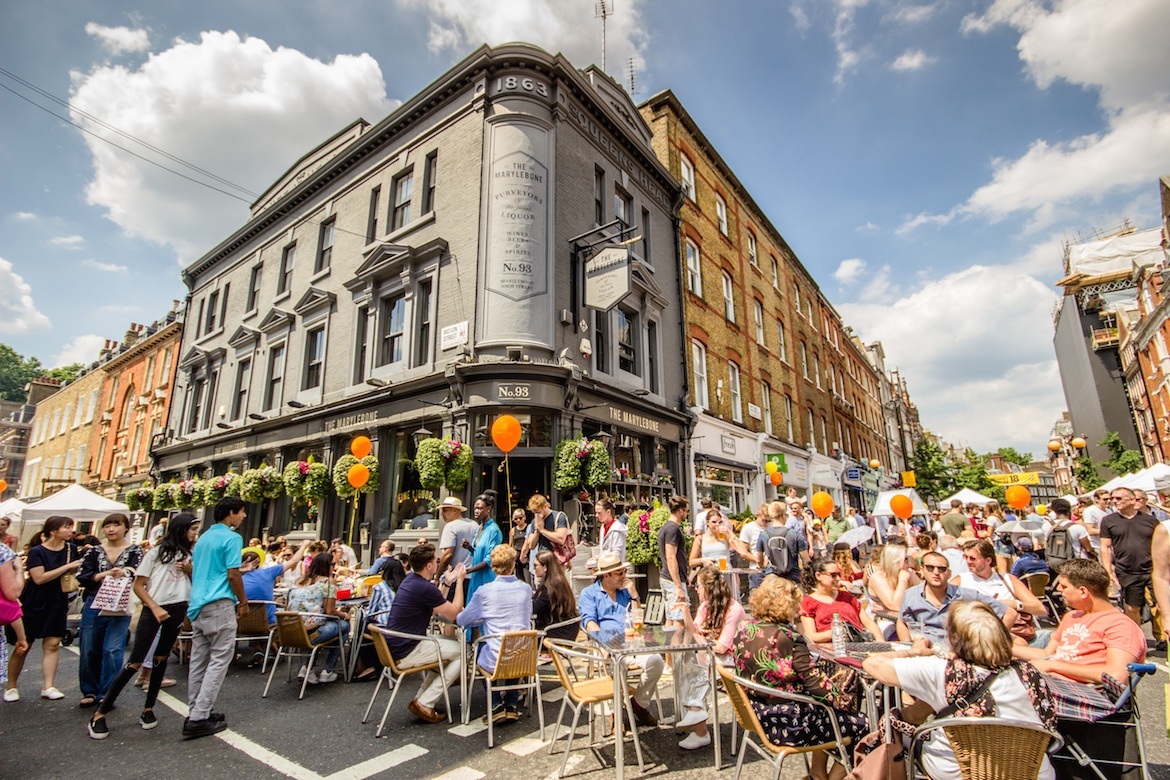 It’s not much farther to Mayfair, an affluent, exclusive district with designer boutiques, ritzy hotels and grand townhouses.

The entire area has a sophisticated air about it, with clean, quiet streets, wine bars instead of pubs, and bordered by the trendy West End and Hyde Park. In fact, Mayfair is one of the most expensive neighbourhoods in the entire world, which is how it landed the most coveted spot on the British version of the Monopoly board. Chances are you won’t want to open your wallet anywhere near here, but it’s definitely worth strolling through. 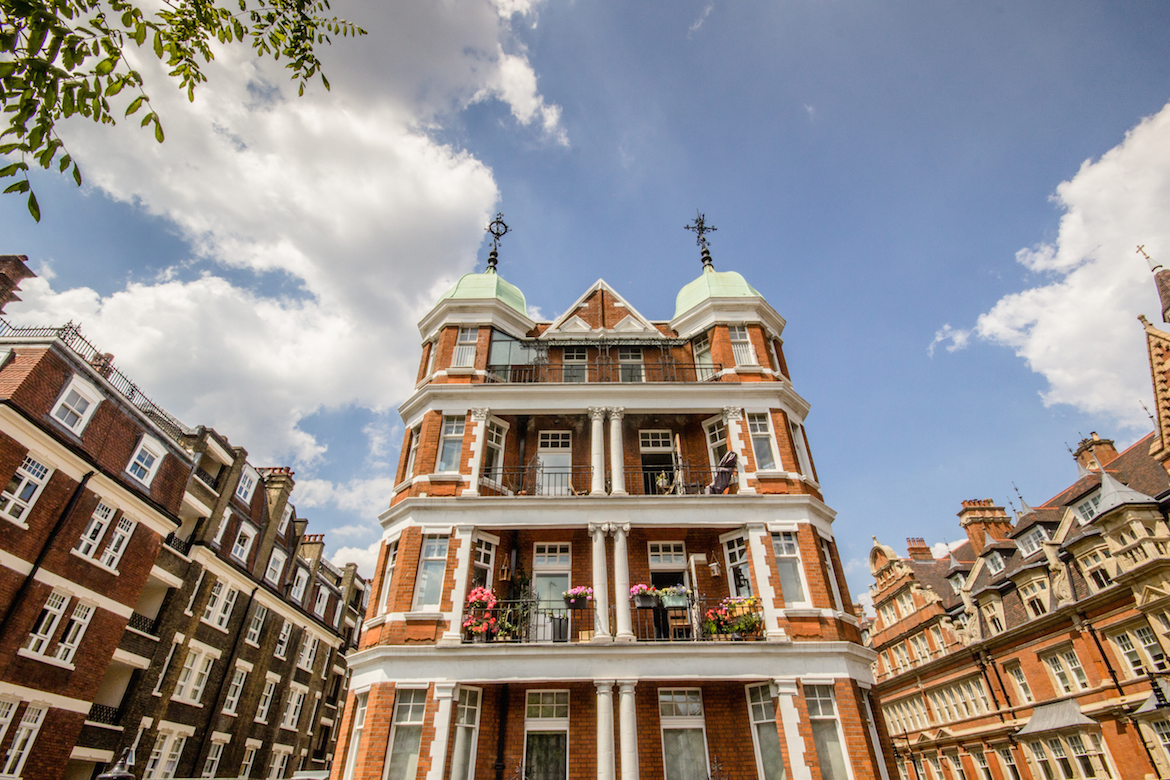 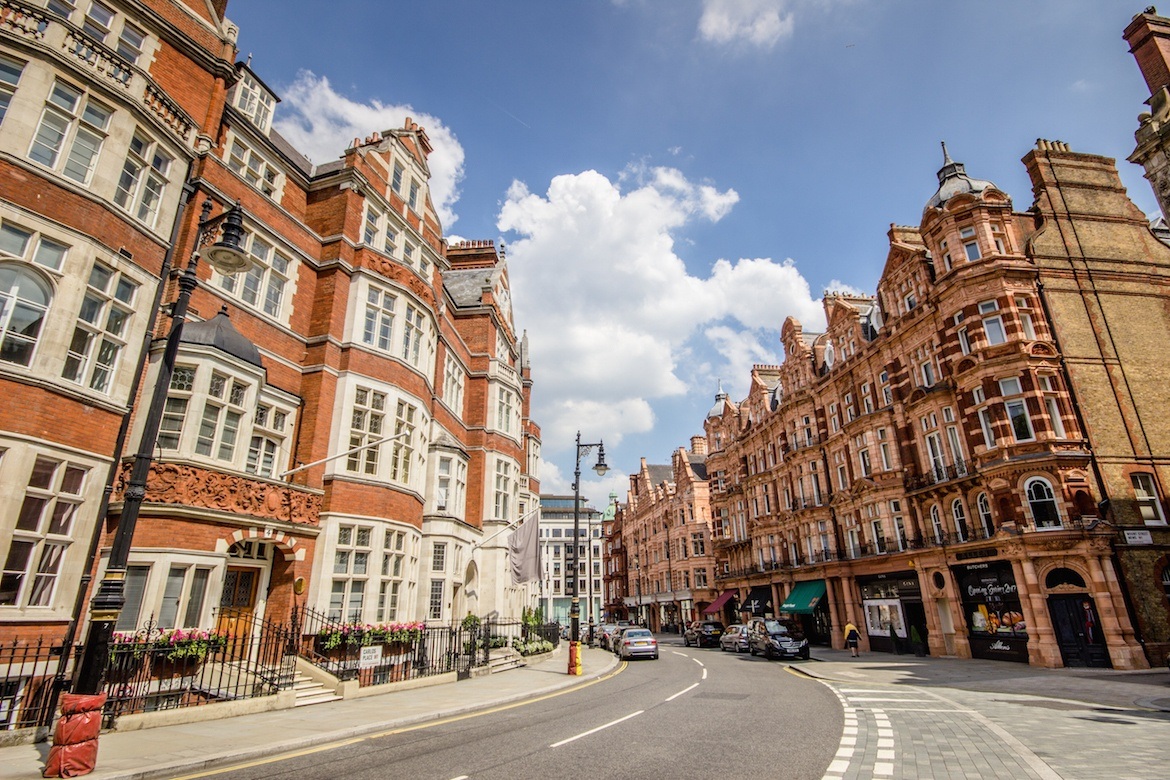 The last stop on your London itinerary should be Hyde Park, which is one of London’s largest green spaces. Stretching more than 350 acres in the heart of the city, it has lakes, tennis and volleyball courts, gardens, running paths and restaurants, just to name a few. But perhaps the biggest draw for royal watchers is that it’s linked to Kensington Gardens, which is where Will and Kate have their apartment and there is also a playground dedicated to Princess Diana. 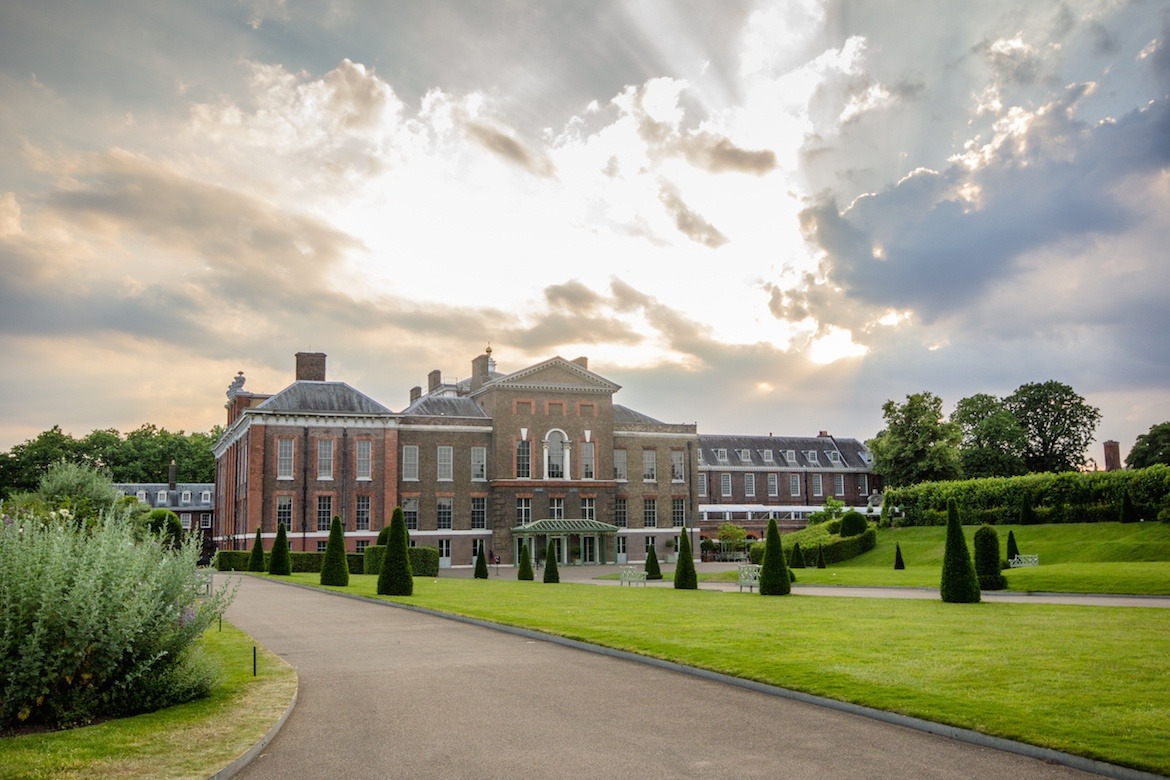 As the skies darken and dusk arrives, make your way to the striking Albert Memorial which was built in honour of Prince Albert and is anchored in the south end of the gardens. Marvel as the sun sets behind its golden facade, capping off a whirlwind trip seeing London in two days. 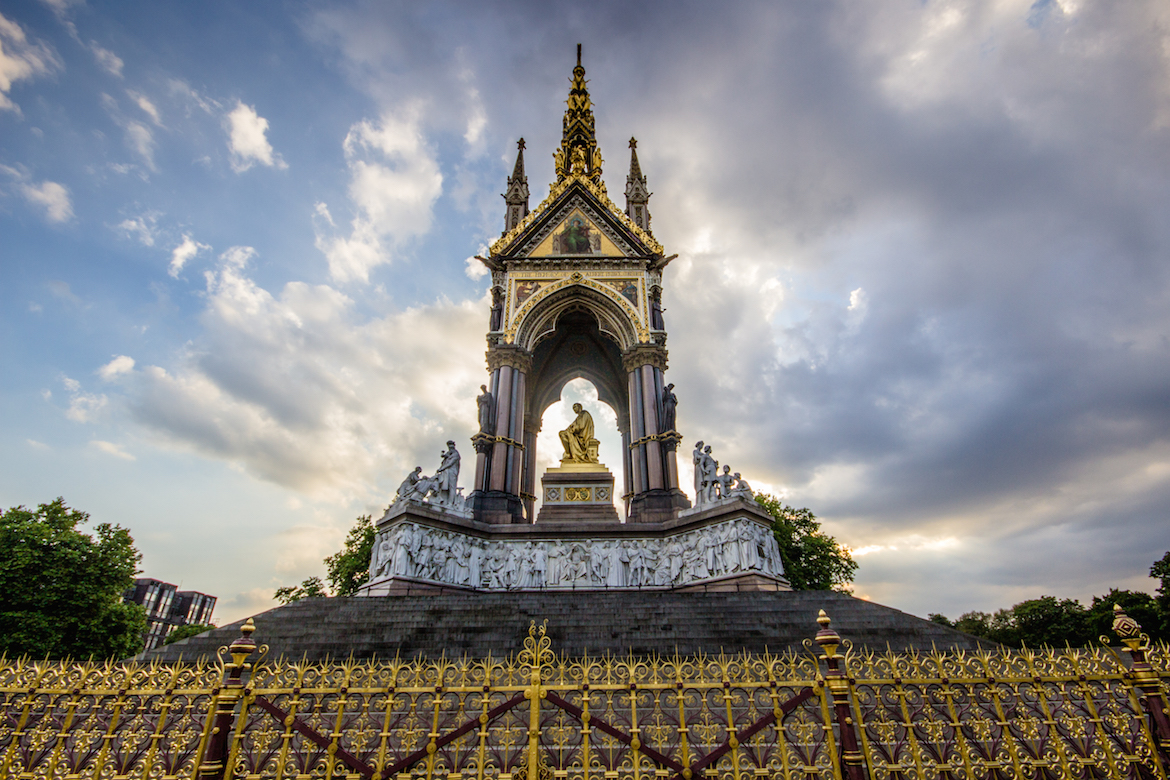 Tours to help you visit London in 2 days

If you haven’t noticed yet, London is both huge and expensive! Save your tired feet and wallet, and get one of these passes to save money on attractions and transportation: 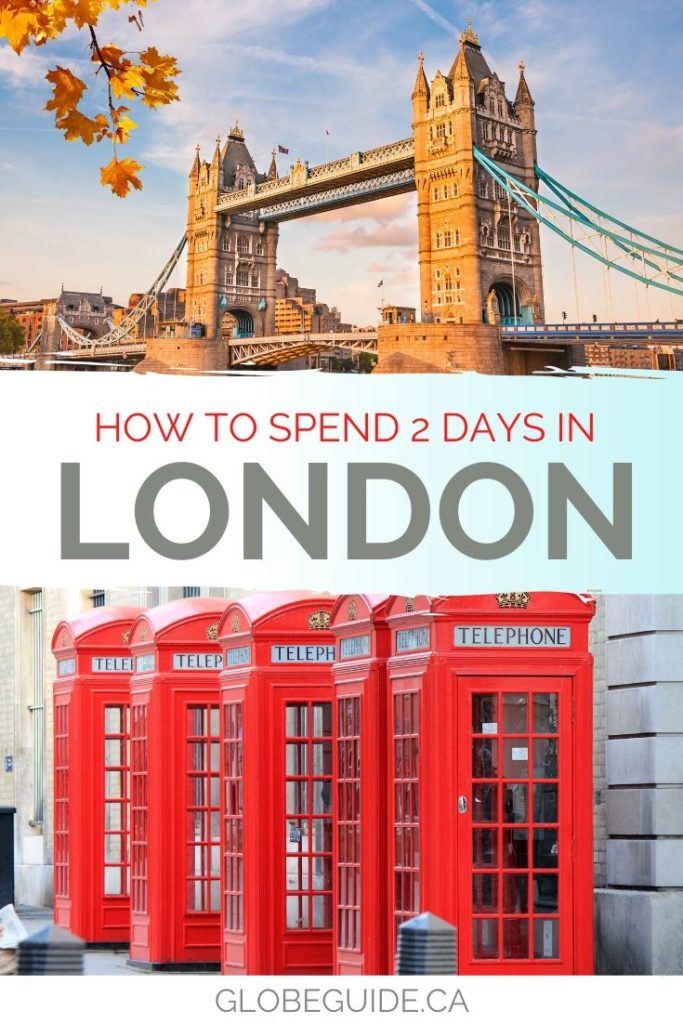 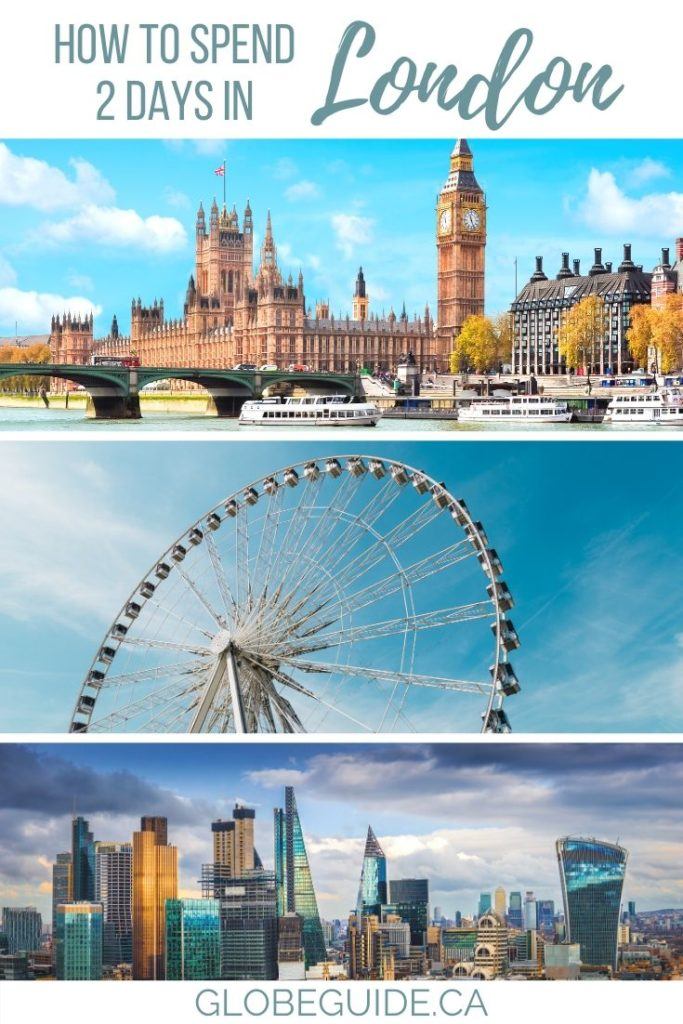 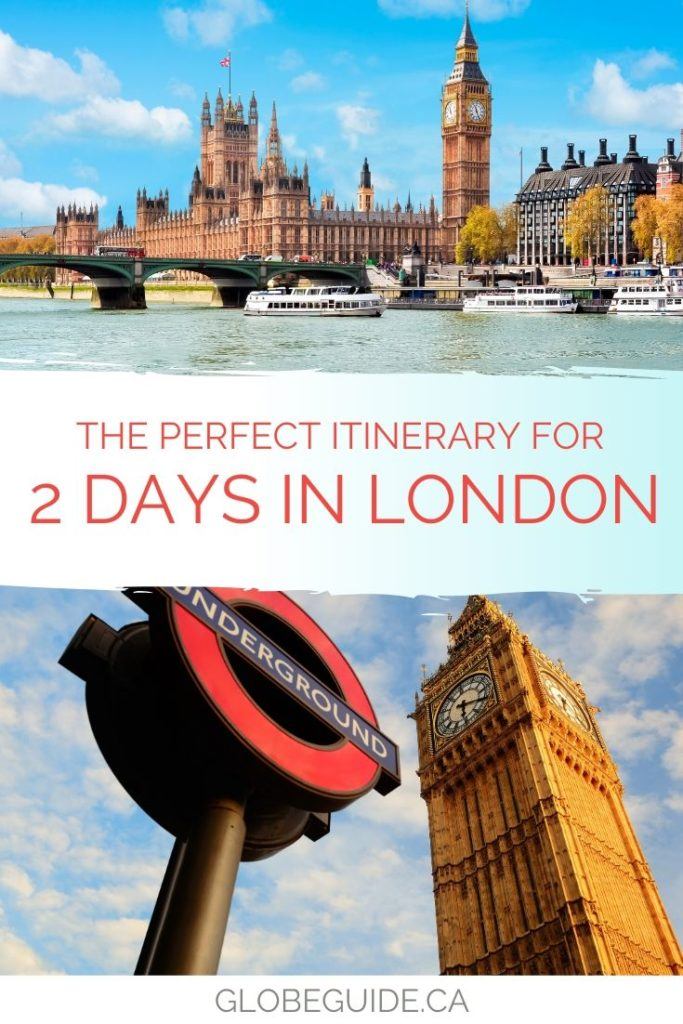