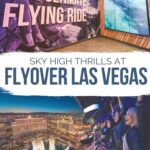 I flew down the mountainside, soaring above thick forests of tall fir trees dotting the snow-covered slopes. Wind and cold air hit my face as I spotted a daredevil in a billowing wingsuit picking up speed just ahead of me, as we zoomed down Washington’s towering Stehekin Mountain.

Just when it felt like I was about to reach the base, there was a whoosh and I was suddenly transported to the Hell’s A-Roarin’ ranch in Gardiner, Montana. My heart raced with excitement as I caught up with a herd of horses galloping through the snow, their strong flanks shimmering in the sunlight.

How is this even possible?

No, I haven’t quite figured out time travel yet. Instead, this adrenaline-filled adventure was all thanks to the FlyOver Las Vegas flight ride, and its cinematic masterpiece highlighting the best of the American west. 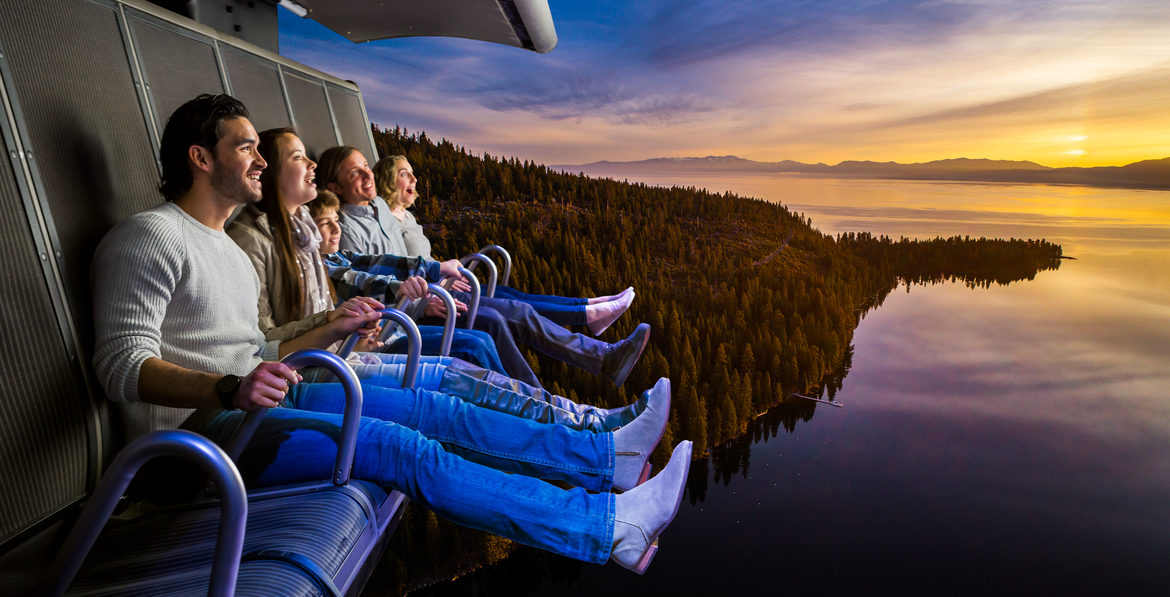 Thanks to incredible technology like a 52-foot spherical screen, moving platform and multi-sensory special effects, guests feel like they’re soaring right above some of the top natural wonders in the USA. 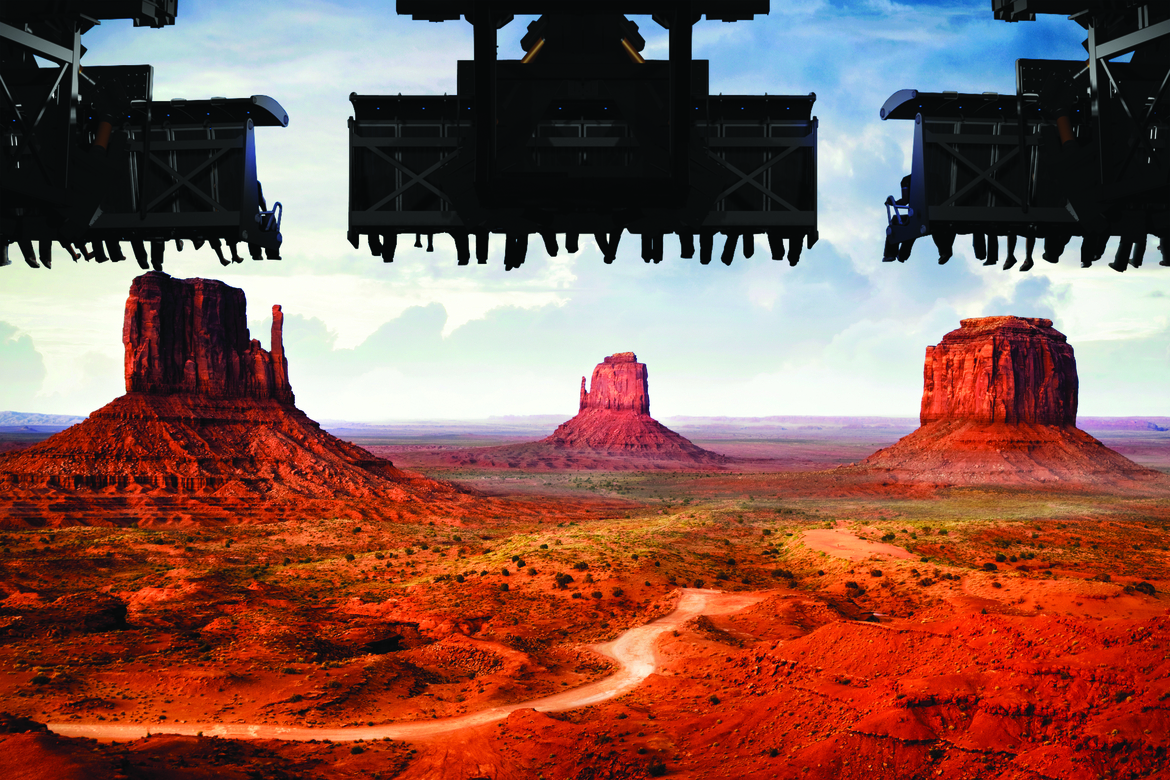 FlyOver is one of Pursuit’s newest attractions, modelled after similar ones in Canada and Iceland. Despite its location in the heart of the Las Vegas strip next to the Hard Rock Cafe near the MGM Grand, guests are able to leave the craziness of Vegas fixtures like snakes and showgirls behind the moment they step inside.

READ MORE: FlyOver Iceland: A visual masterpiece of the Land of Fire and Ice 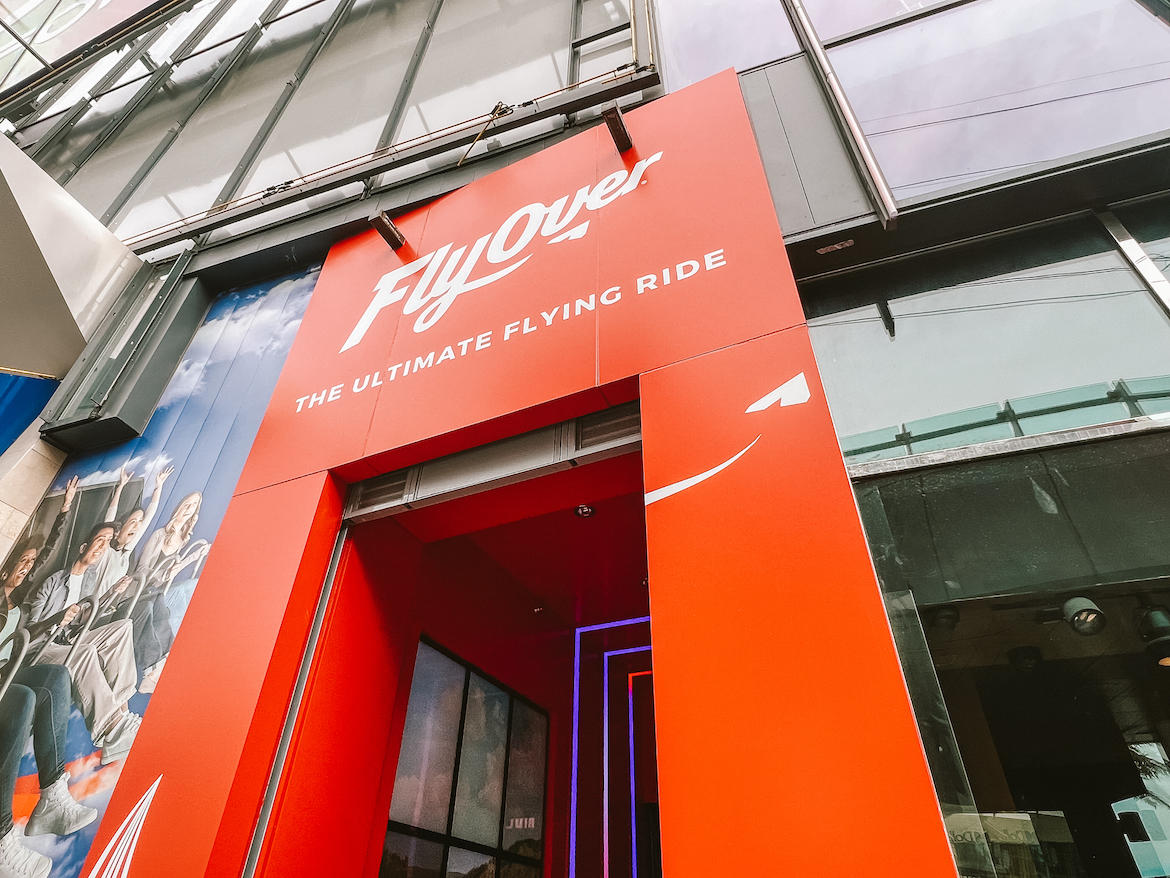 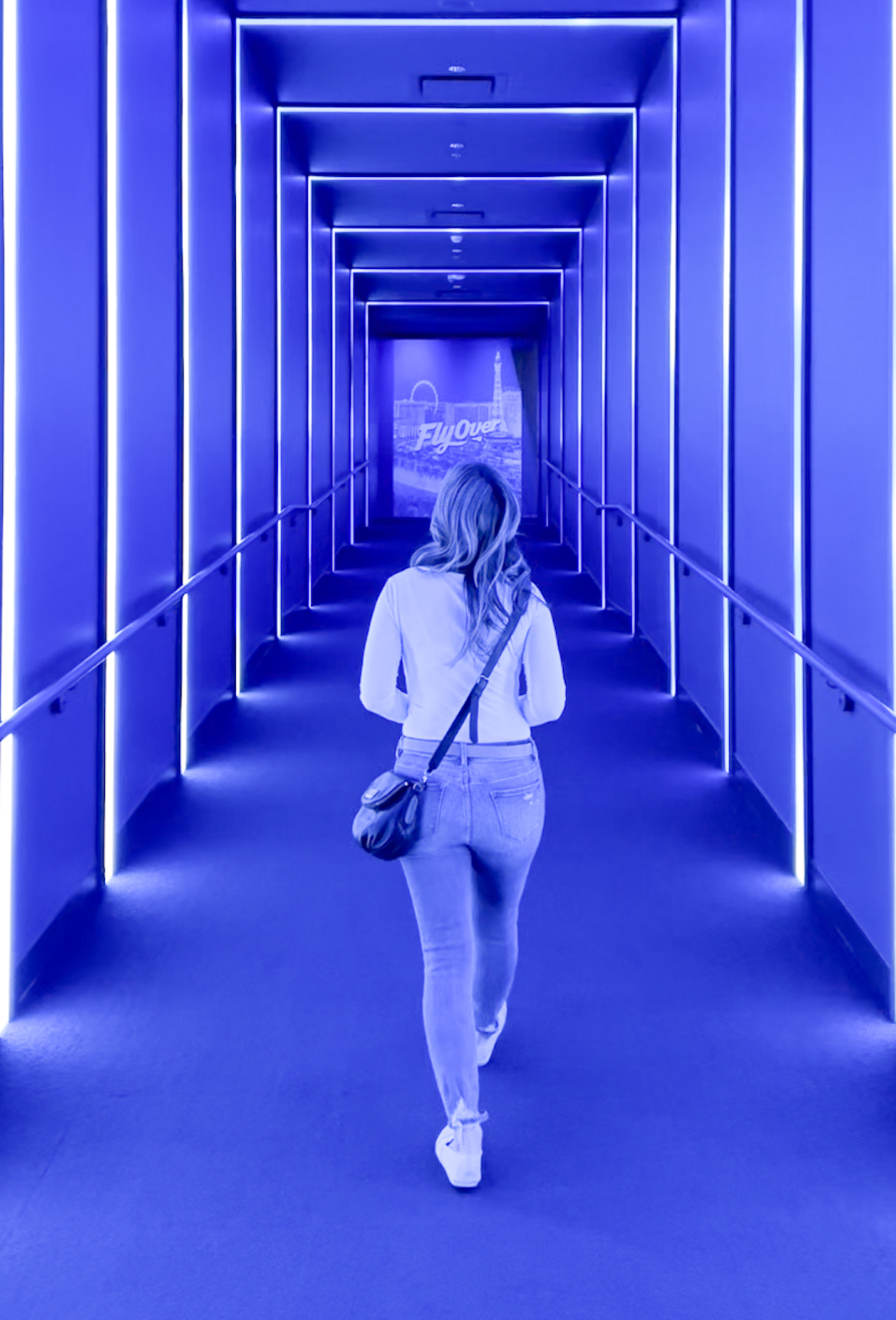 “With FlyOver, we’re all about telling a story, and the story begins as soon as you walk in the door,” explains general manager Jack Kenn, as we pass through the lobby meant to set the scene by mimicking a slot canyon. “The purpose of the theme here is a decompression zone.

“Once [guests] get here they forget where they’re at, they have no idea they’re in Vegas most of the time.” 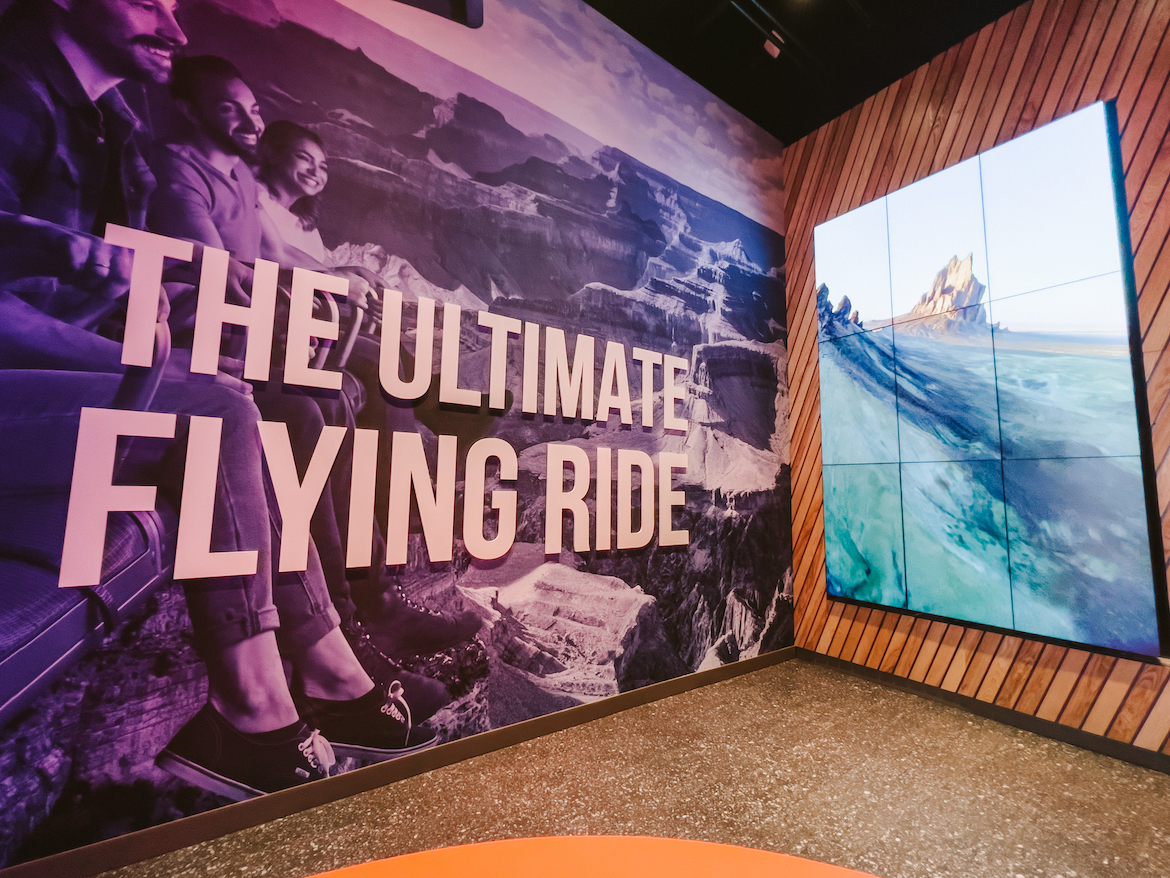 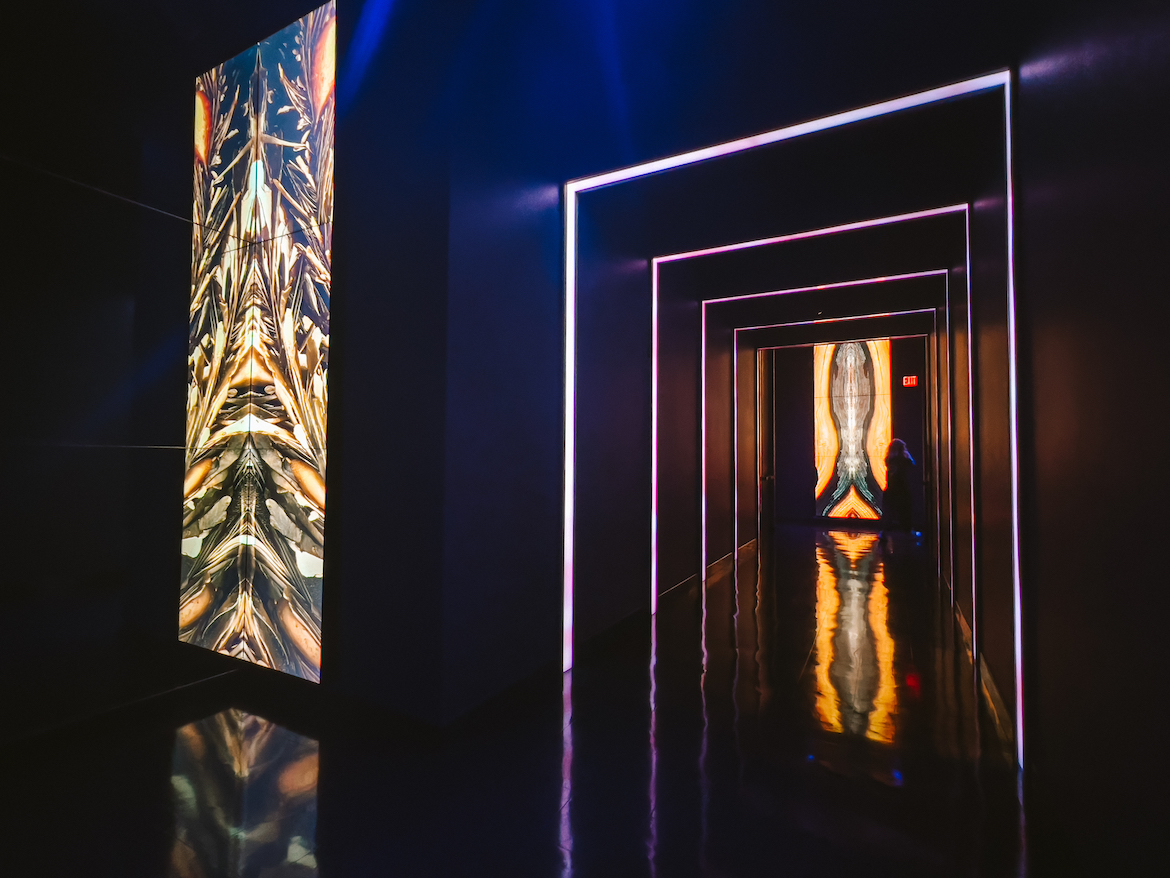 Award-winning director Dave Mossop and creative director Rick Rothschild helped bring the project to life– a team that Pursuit was fortunate to partner with, since Rothschild produced more than 25 theme park attractions for Disney over 30 years and pioneered the original flight ride ‘Soarin’ over California’ (now called Soarin’ Around the World). 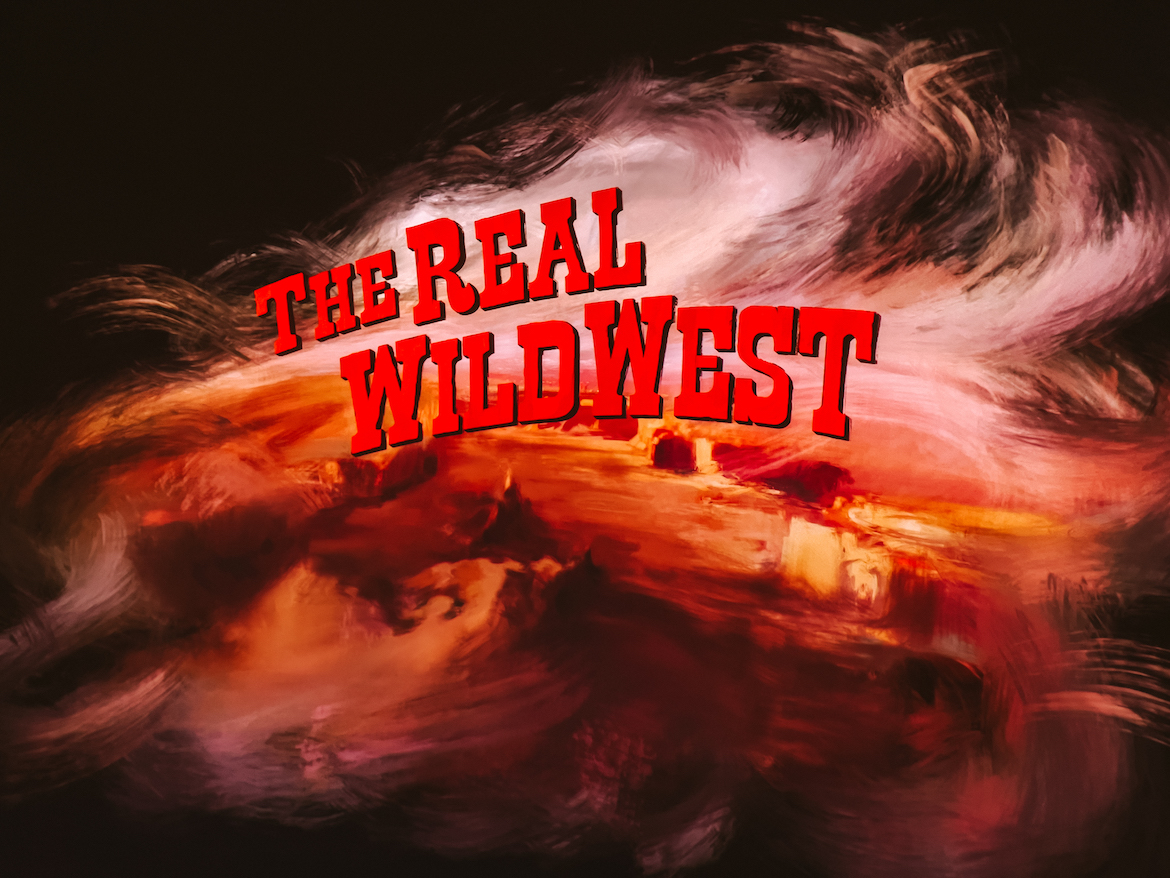 Those who are scared of heights, fast movement or prone to motion sickness don’t have to worry, since FlyOver uses newer technologies such as six axis’ in the design versus the two used at Soarin’.

The ‘machine’ includes mesh seats that guests are buckled into, and the material allows warm and cool air to flow through and complete the seemingly-weightless sensory experience. Drops of water are felt when flying over surfers riding the waves in San Diego, and scents waft through the air like sage burning during an Indigenous ceremony and smokey gunpowder when passing over Arizona’s Goldfield Ghost Town. 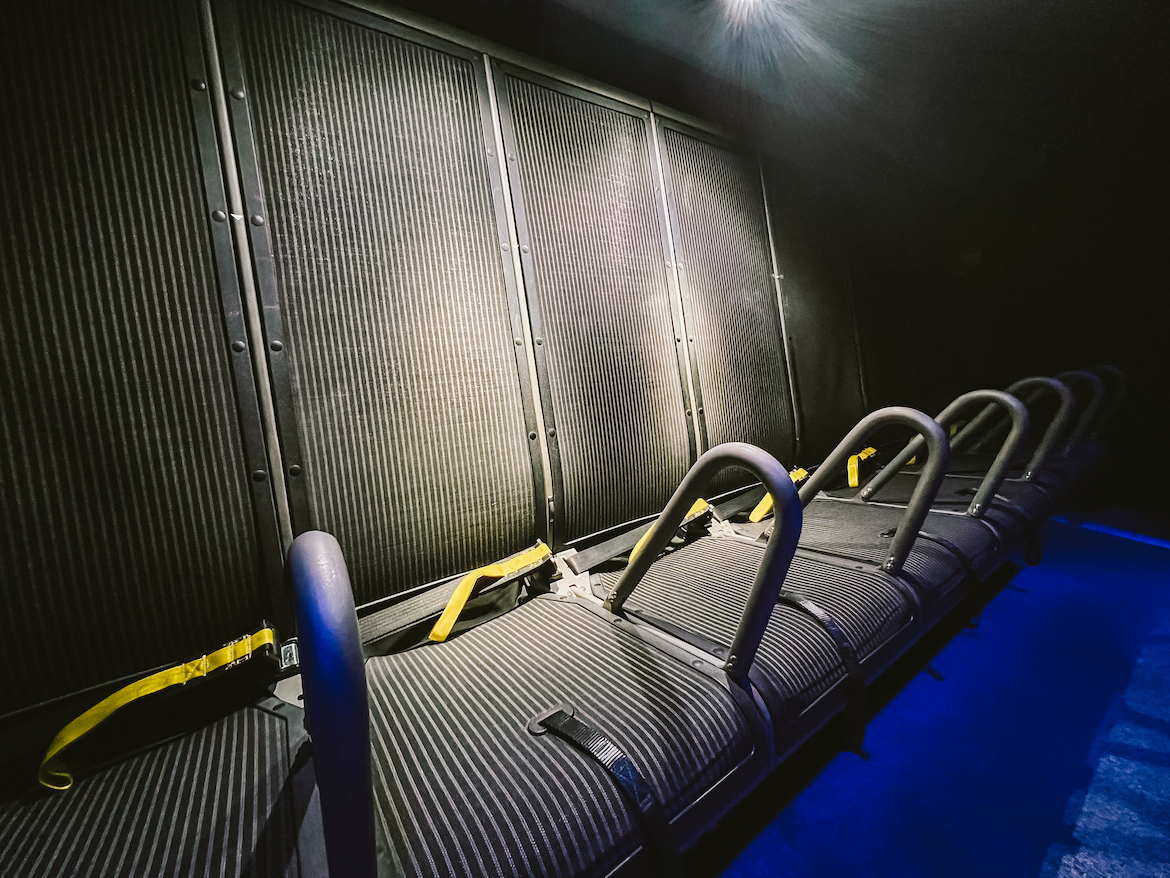 Audiences literally gasp at the untouched beauty highlighted during The Real Wild West, like following a herd of galloping stallions through Yellowstone or flying over Oregon’s volcanic peaks. In fact, the flight ride is so spectacular that guests often don’t want to leave when it’s over.

“A lot of people will come in and buy [a ticket] because they’re not really sure what it is, then they’ll ride the ride and be like ‘oh my God I want to do it again,’” Kenn laughs. 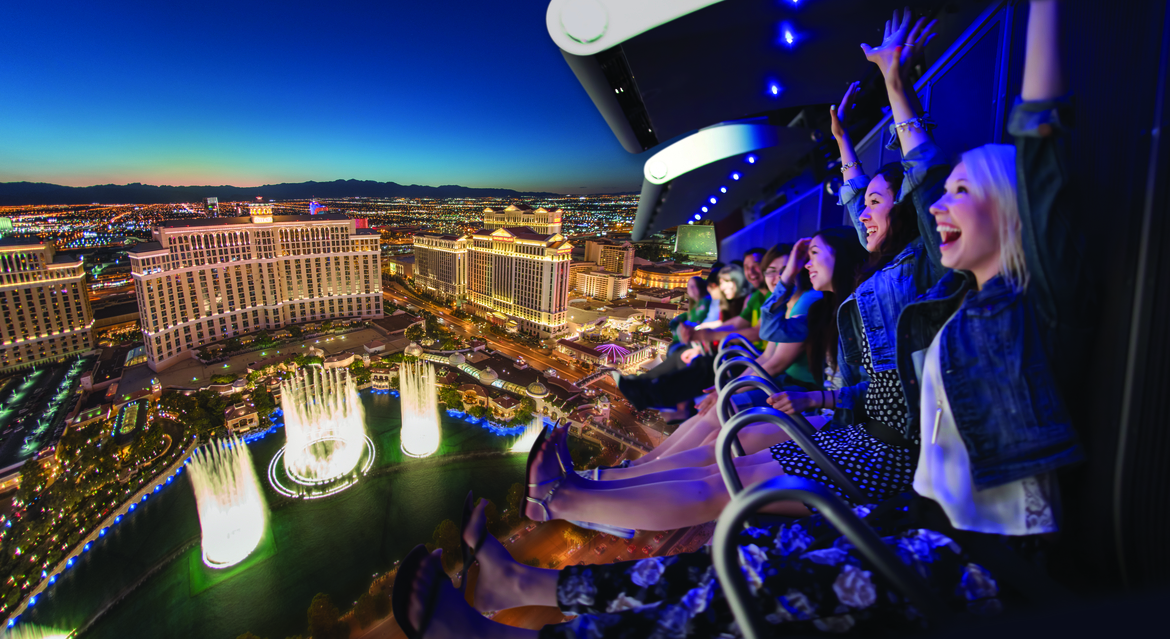 Other fun things to do at FlyOver Las Vegas

Fortunately, it’s easy to stick around since there are two identical theatres at FlyOver Las Vegas playing different films. Along with The Real Wild West, there’s an Iceland movie (the same one that also plays at the FlyOver Iceland location in Reykjavik) which takes a mesmerizing journey through the geysers, waterfalls and volcanoes in the Land of Fire and Ice.

The whole experience can easily last at least an hour, since FlyOver has three separate parts: the flight ride, the ‘boarding area’ which features ambient sound and cinematic effects, and the six-minute, western themed pre-show on 360-degree wraparound walls. 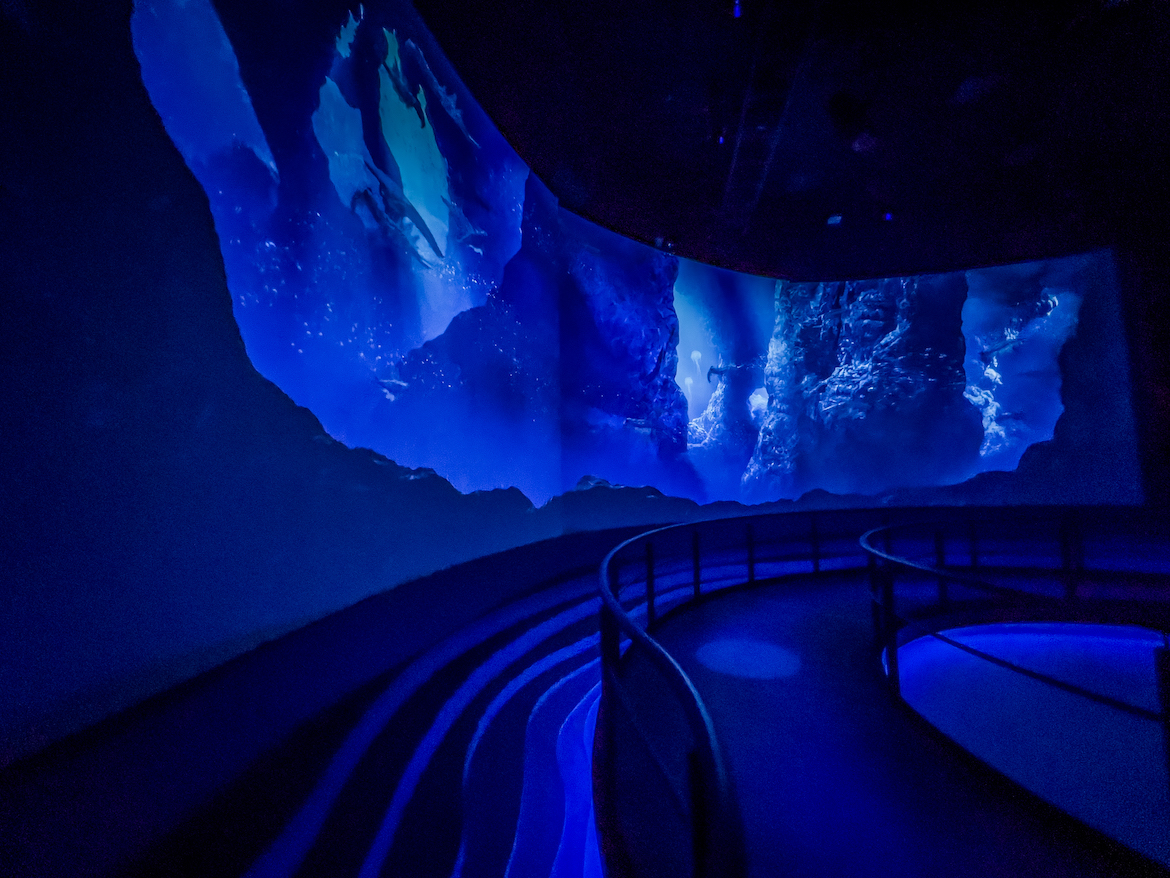 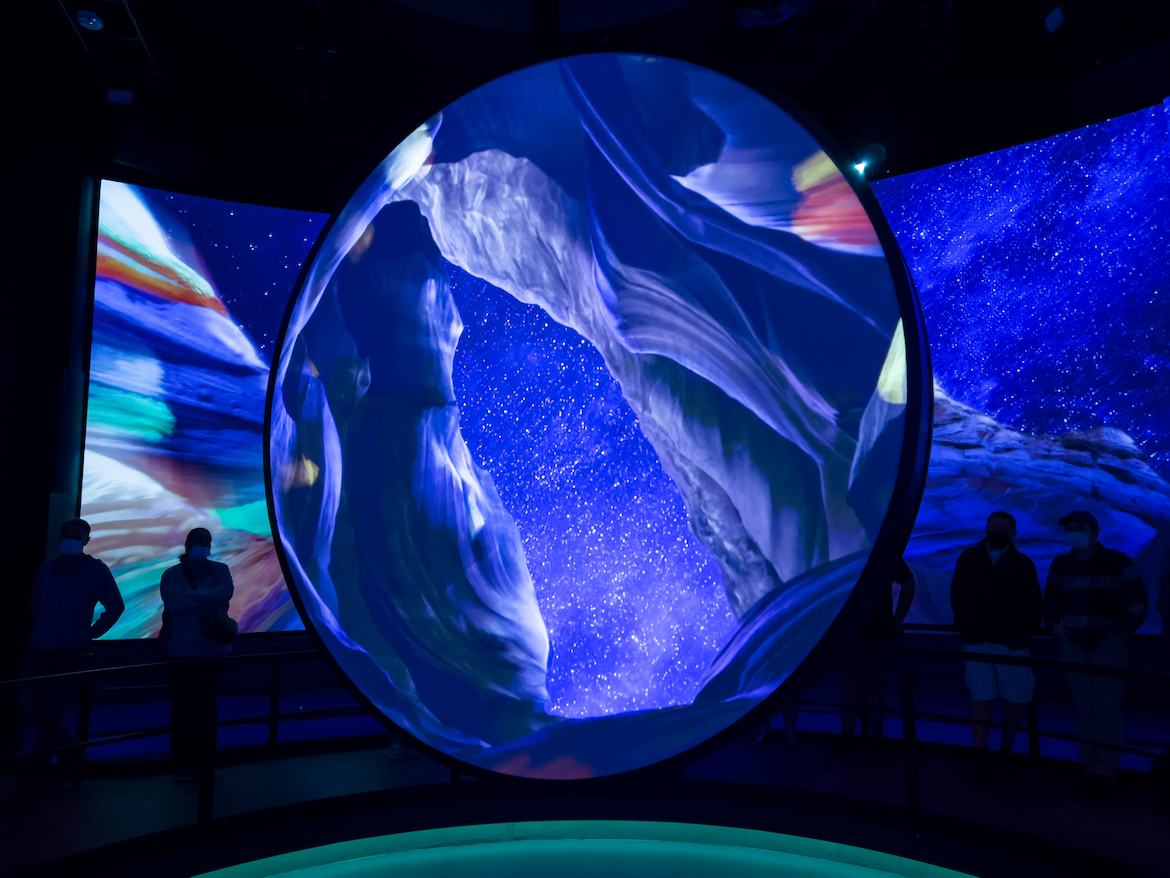 FlyOver’s dual ride package is the most popular ticket, which is no surprise since it also includes a drink at the on-site bar, The Lost Cactus.

This is Las Vegas, after all.

Inspiration for the colourful cocktails came from the movie, like Desert Sunset that has golden hour hues, the signature Prickly Pear Margarita, and the smokey Durango to Silverton old fashioned which is a nod to the wild west. 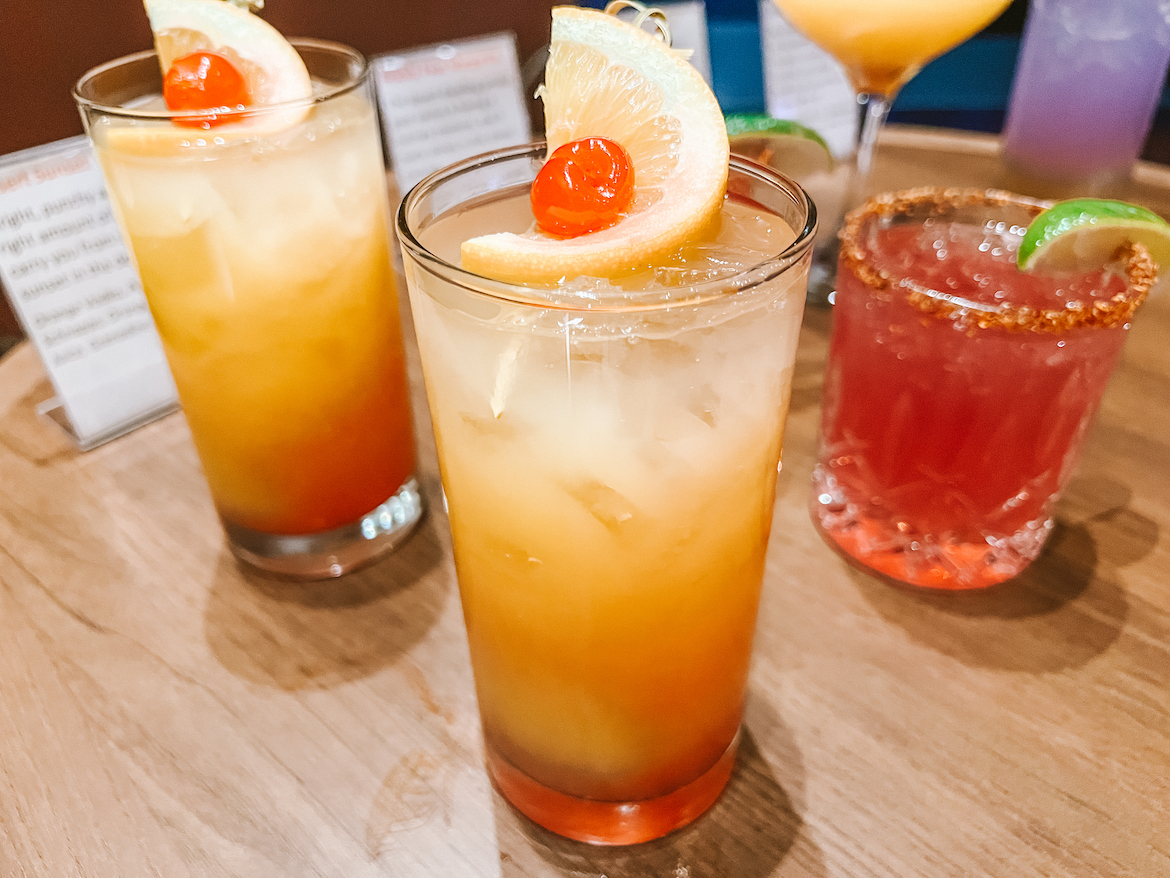 Drinks at The Lost Cactus 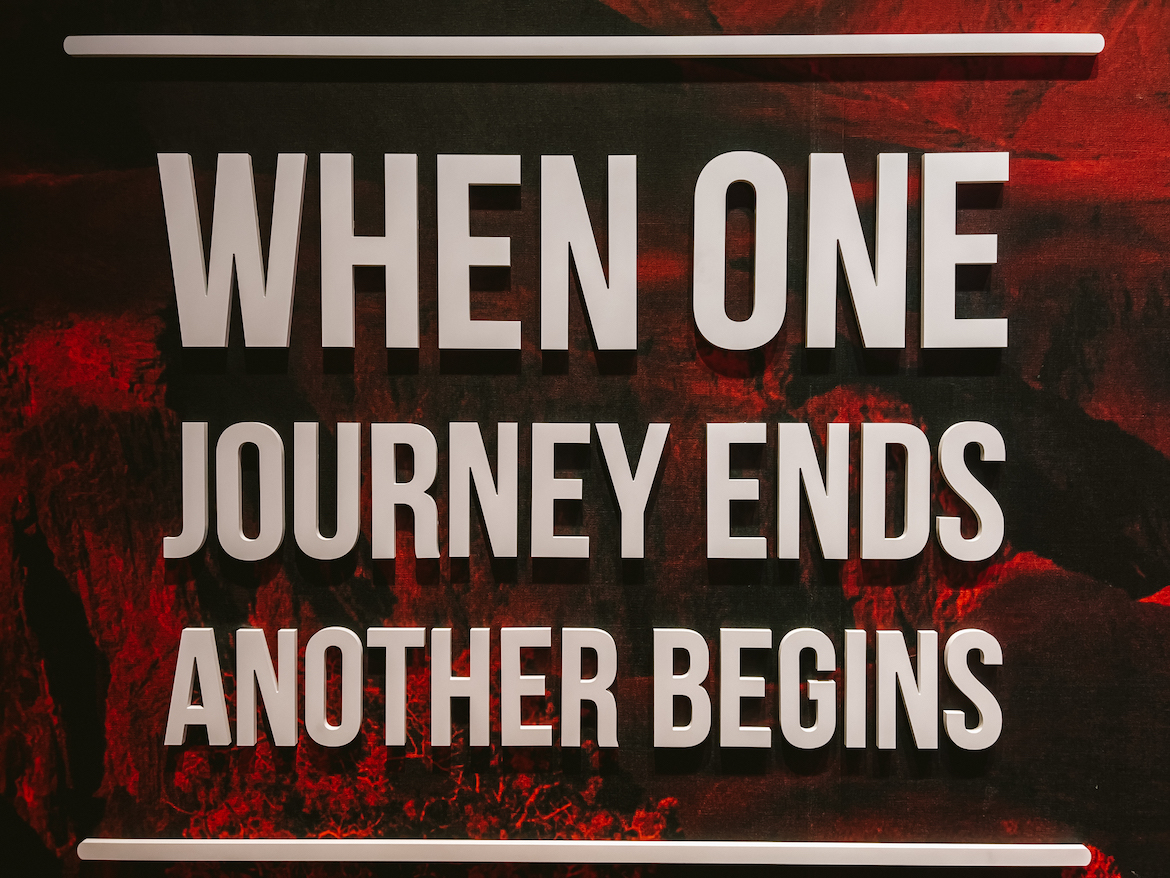 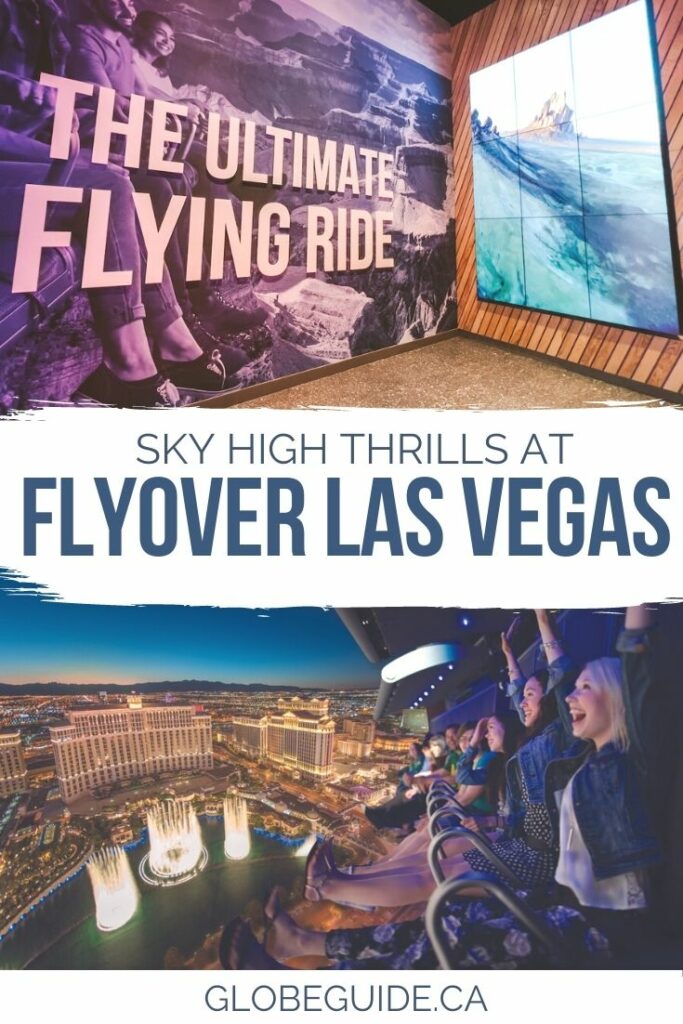 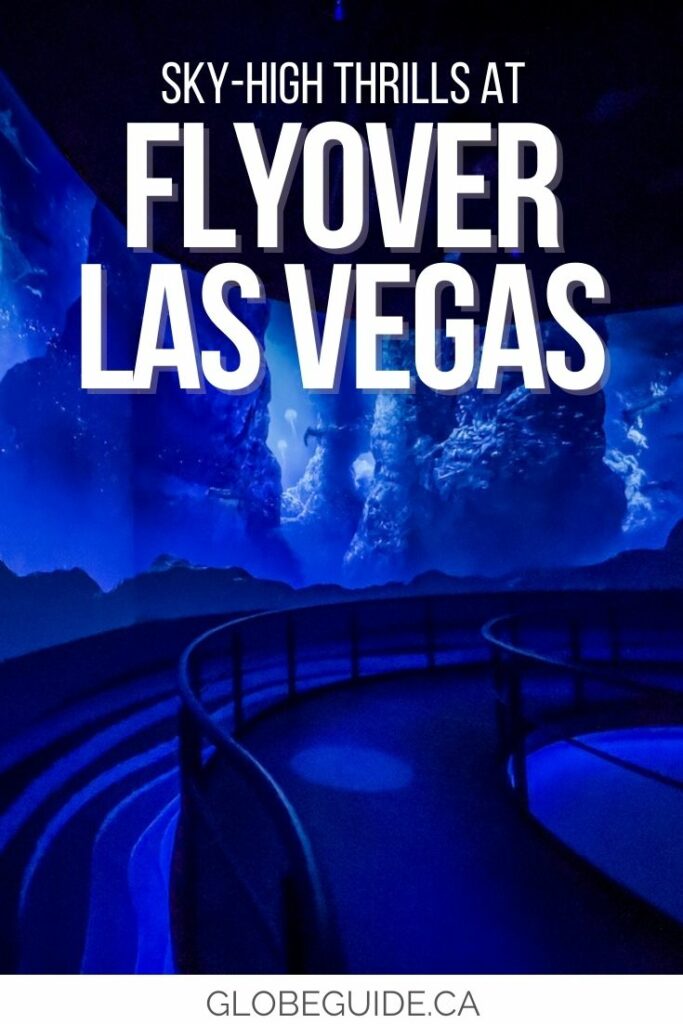 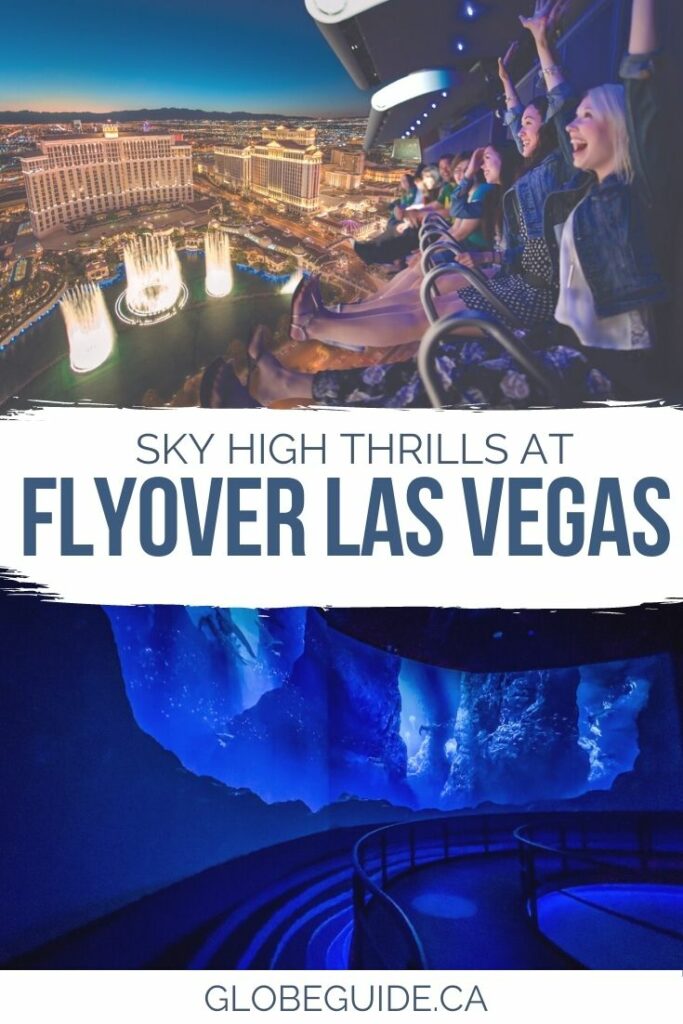