FlyOver Iceland: A visual masterpiece of the Land of Fire and Ice 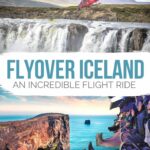 A blast of wind whipped through my hair, and the sky came alive as the rainbow hues of the Northern Lights danced around me. An imposing glacier rose up in the distance, its craggy crevasses luring intrepid mountaineers to discover what’s hidden beneath the icy surface.

Looking down, I spotted a pair of hikers walking through a field bursting with purple lupines, and the fragrant smell of the sweet blossoms filled the air as I whizzed by, the scene below transforming as a herd of galloping horses thundered by a glistening lake.

This is the unseen Iceland, a display of natural wonders that can only be experienced at FlyOver Iceland. 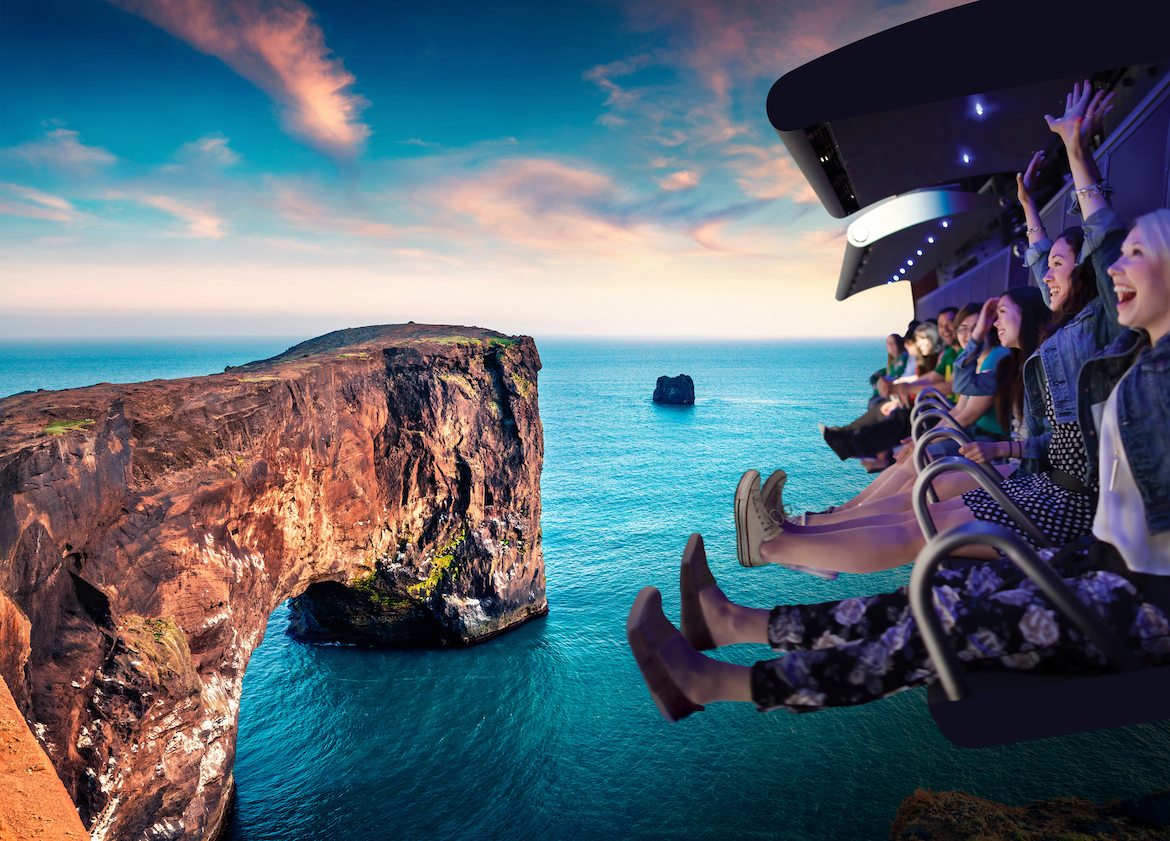 This cinematic masterpiece in Reykjavik highlights incredible places around the Land of Fire and Ice, by projecting stunning visuals on a 20-metre high spherical screen. Guests are buckled into mesh seats, and the state-of-the-art technology includes a moving platform with six degrees of motion which makes it feel like you’re really flying over the landscape. 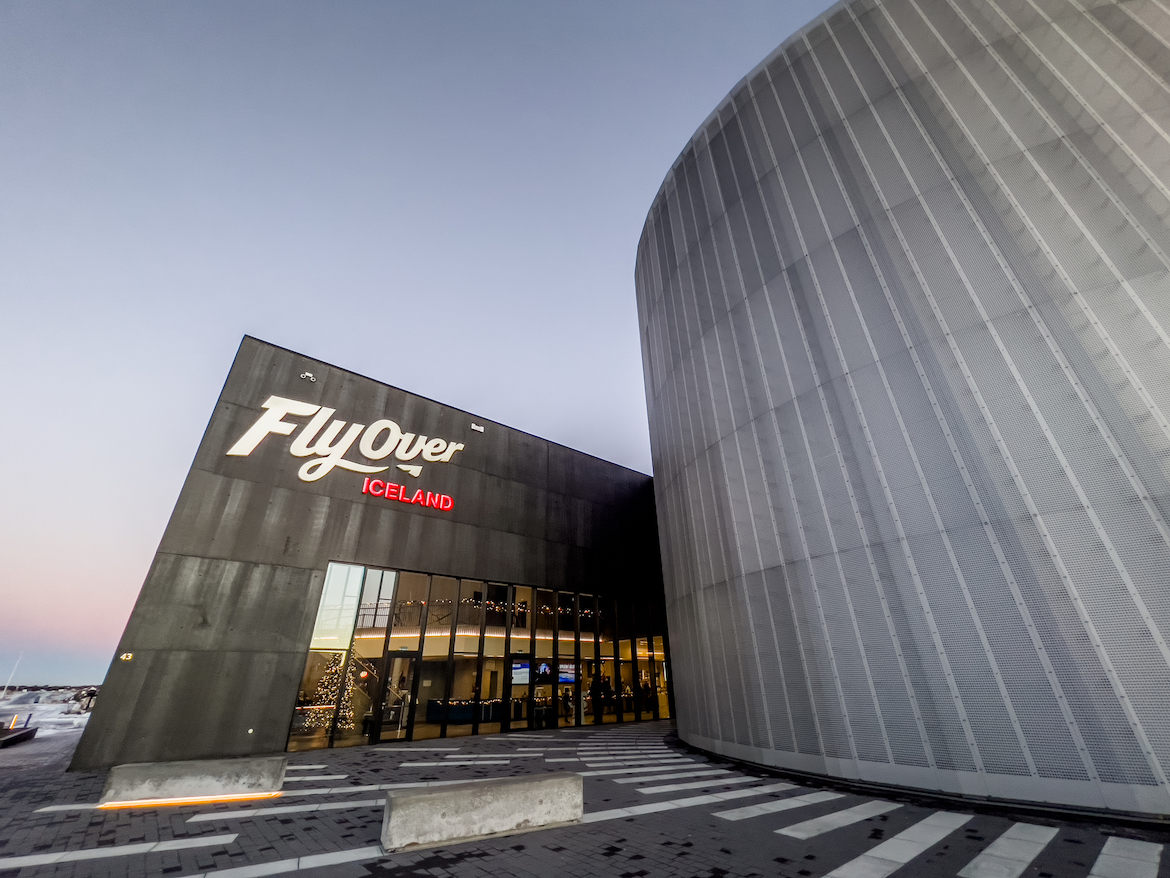 The FlyOver Iceland visit starts with tales of ancient Iceland in a Viking longhouse, which is reproduced by scenography and shadow-play projections. Guests are then guided by Su Vitra–a troll designed by celebrated illustrator Brian Pilkington–to The Well of Time where projections of Icelandic features like erupting volcanos and the northern lights flash around the entire room. 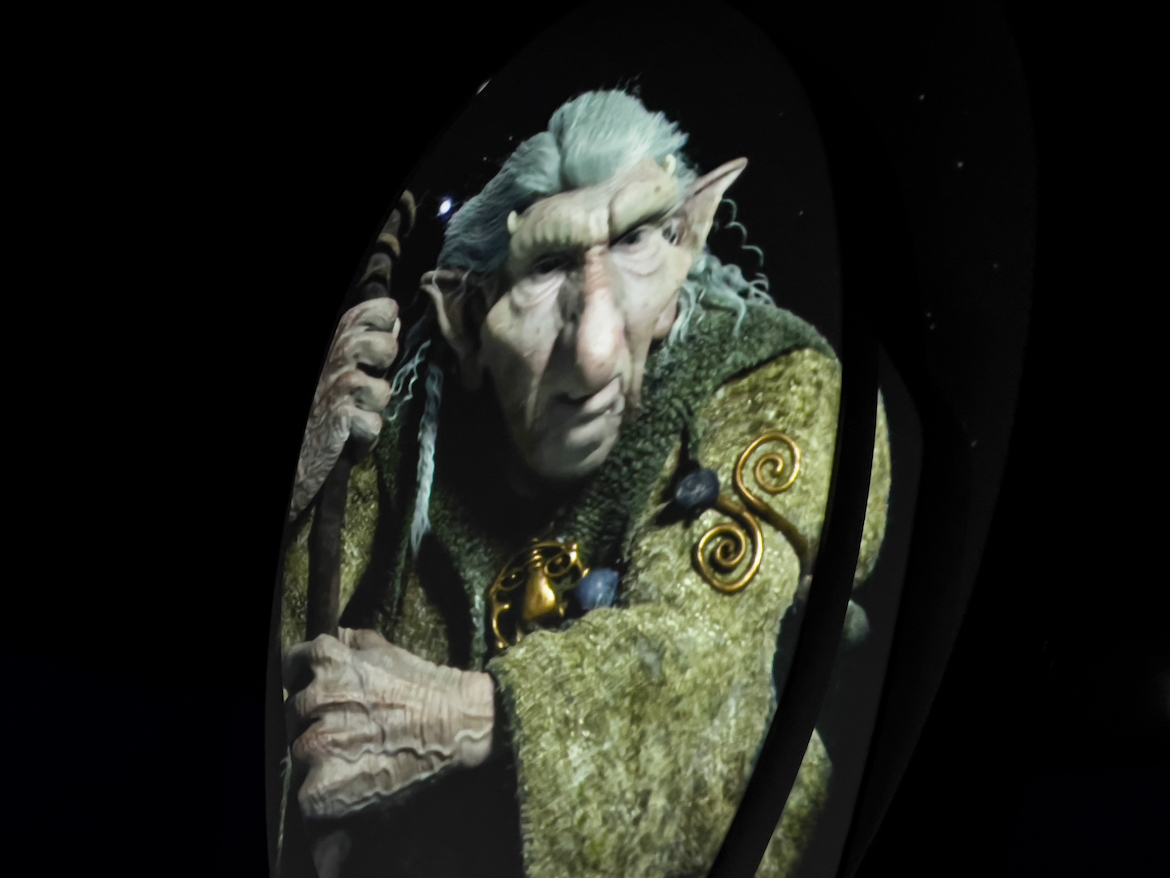 SúVitra is featured in the pre-shows 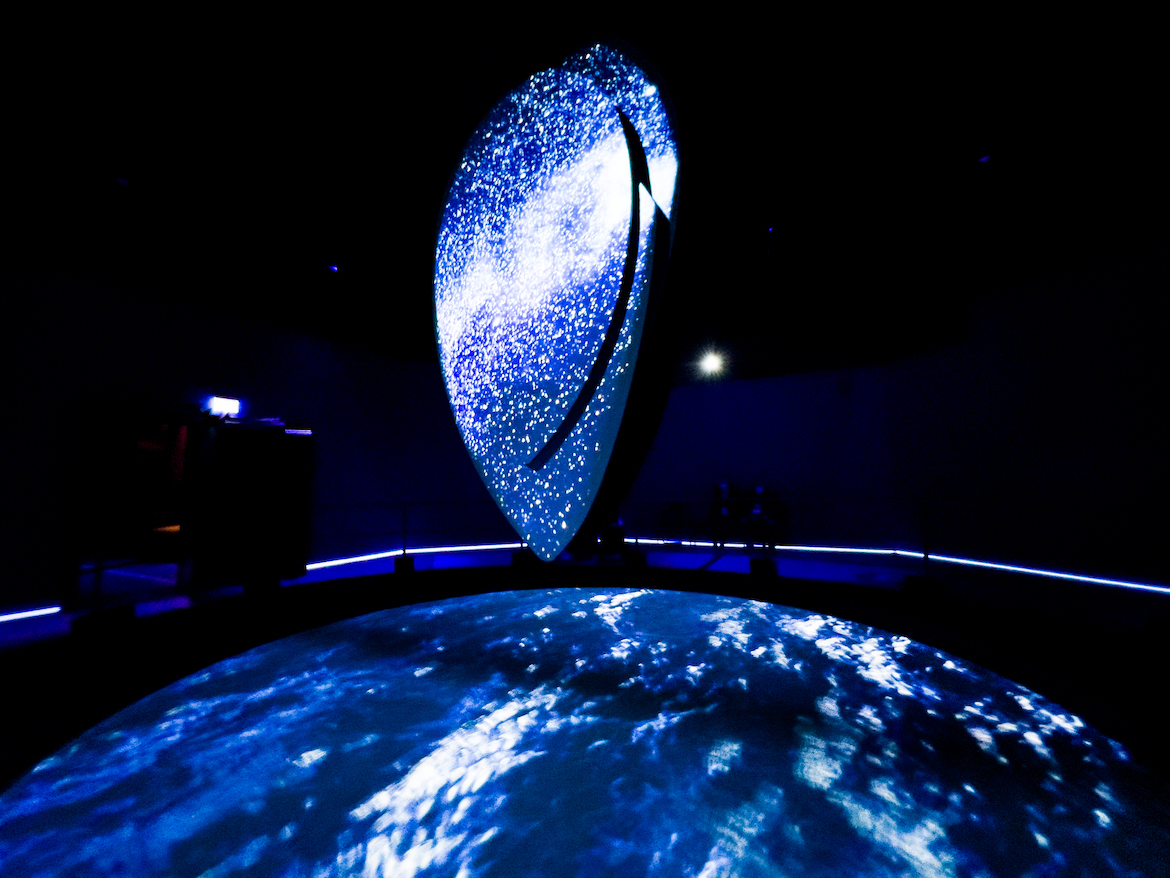 The Well of Time

The final stop is the flight ride itself, a nine minute long film that’s so inspiring and captivating that its beauty has been known to move people to tears.

The spectacular visuals were captured using specialized cameras mounted on a helicopter, which was expertly flown by stunt pilot Jón Kjartan Björnsson who has worked on shows like Game of Thrones and The Amazing Race. 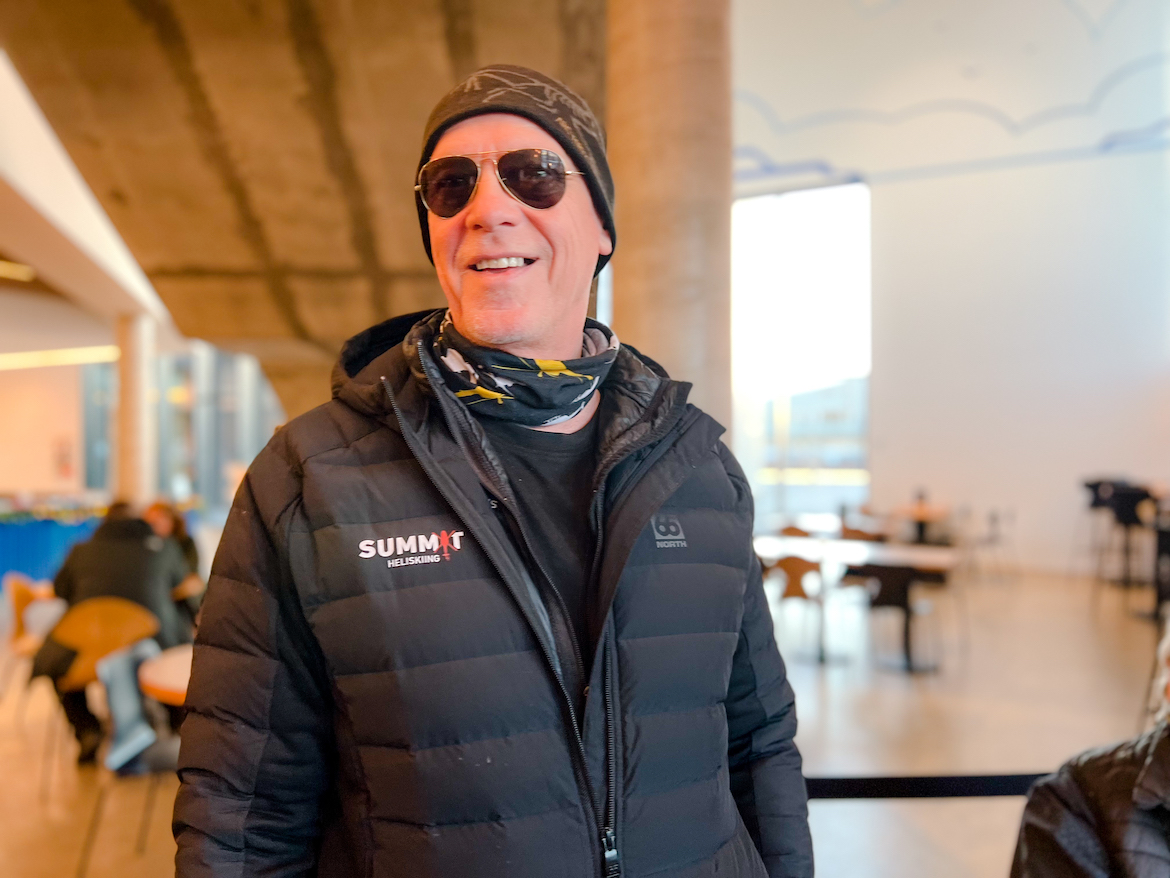 “We flew for approximately 100 hours in the air for the whole sequence,” he says, adding that they focused on landscapes that aren’t often featured or had never been filmed before.

Those spots include mountaineering in Hörgársveit, the painted mountains in Landmannalaugar and the imposing 120-metre-high arch in Dyrhólaey which includes a dramatic pass right through it.

“It was a lot of preparation because we had this little plane in the foreground,” Björnsson explains. “The first scene was the plane would go through the arch and I was following through it, but at the last minute they didn’t get the approval for the plane to fly through. I was only permitted to get through, so we changed the sequence.” 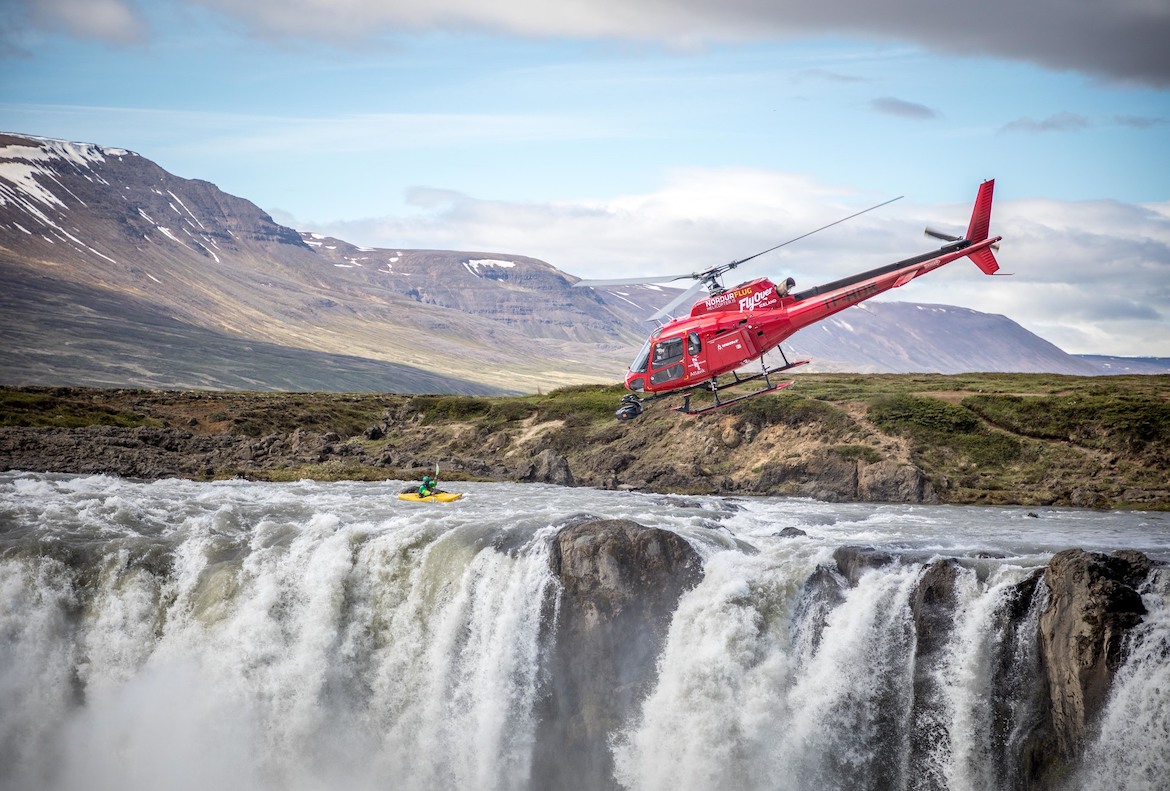 Moments like that, along with shots captured from just a few feet above jeeps and kayakers are what make the flight ride so breathtaking. So, does one of Iceland’s best pilots ever get nervous?

“My specialty in flying, more or less, is filming. It was not the nerves of flying over, it was the nerves of getting the shot in [terms of] timing.” 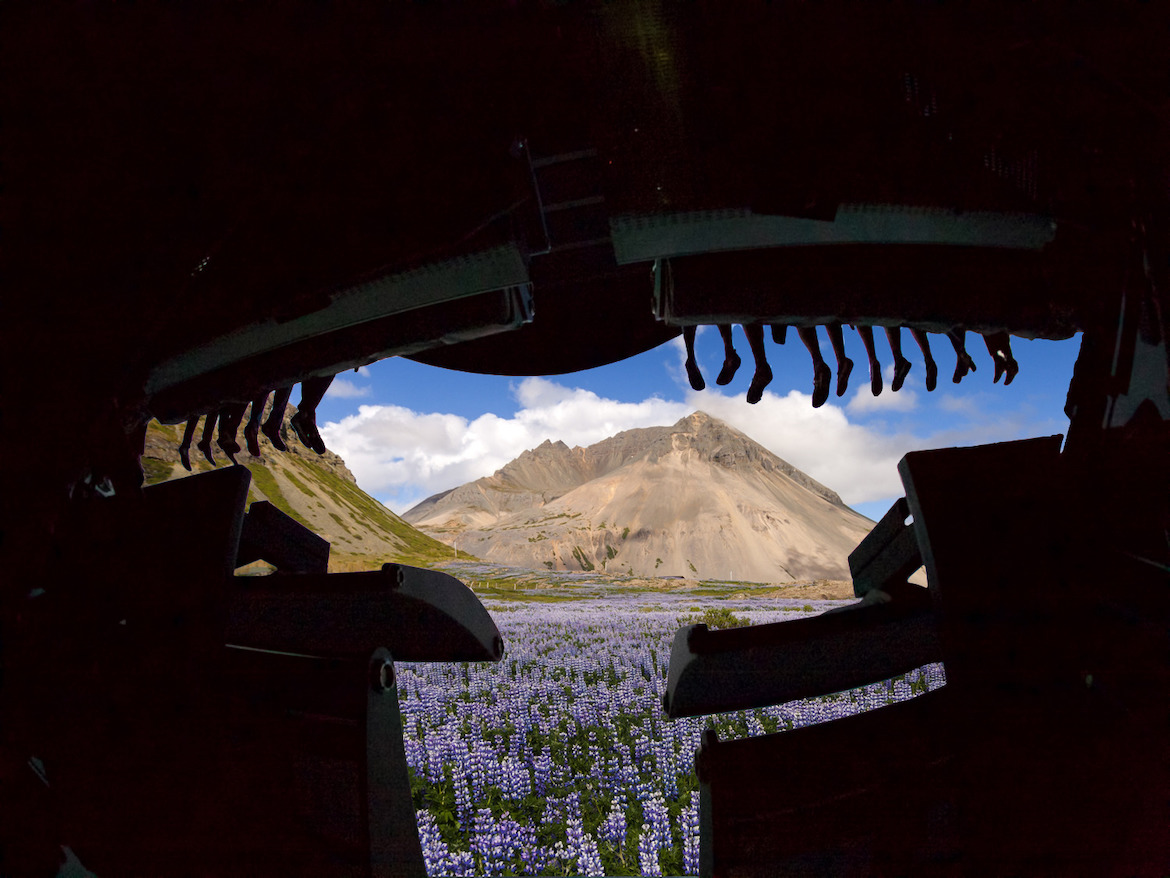 The addition of sensory experiences is important to making guests feel like they really do fly over Iceland, and special effects include bursts of air and the scent of sulfur and lupines. The moving platform enables twists, turns and even bumps, including one mishap that happened while filming fireworks–the only scene that was shot with a drone.

“The fireworks scene was filmed in February, but was meant to [portray] New Years Eve,” explains Eva Eiriksdottir, manager of marketing and brand experience for FlyOver Iceland. “We go insane on New Years. Every single person can buy fireworks, it’s not regulated…so every family has their own fireworks show in their backyards.”

The production team coordinated a shoot where the drone flies right over Reykjavik’s iconic Hallgrimskirkja church, with fireworks bursting into the air on either side. They filmed it twice, but things didn’t go quite as expected the third time around.

“In the very last shot, one of the fireworks actually hit the drone,” Eiriksdottir laughs. “So we just decided to program that in to add a more authentic feel to it, and that’s the bump you feel.” 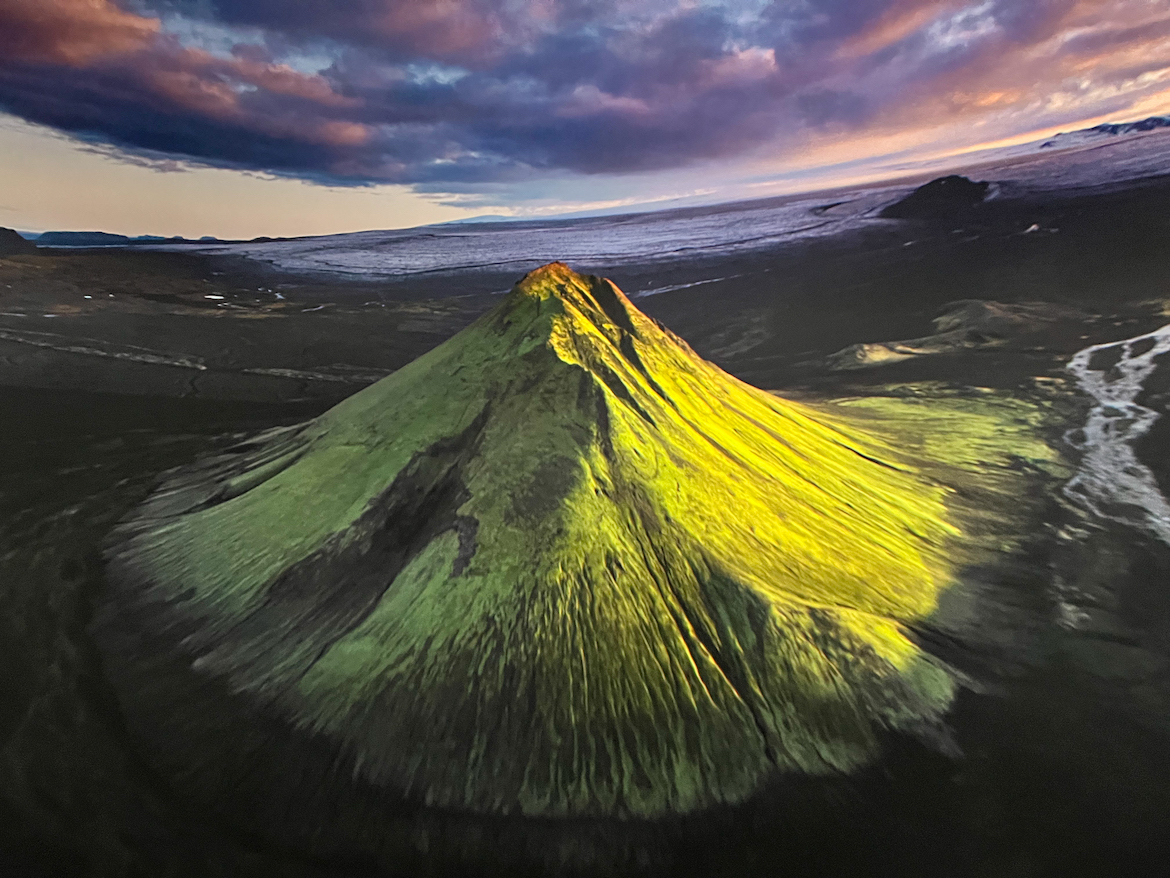 The immersive flight ride is now one of the top Reykjavik attractions, found along the historic harbour in the Grandi district which is a short walk from downtown.

The film is also viewed at the FlyOver Las Vegas flight ride in the heart of the Las Vegas strip, which is home to ‘The Real Wild West’ highlighting spots like the Grand Canyon, Zion National Park and Wyoming’s multicoloured Grand Prismatic spring. There’s a third FlyOver location in Vancouver, Canada with another planned in Toronto. 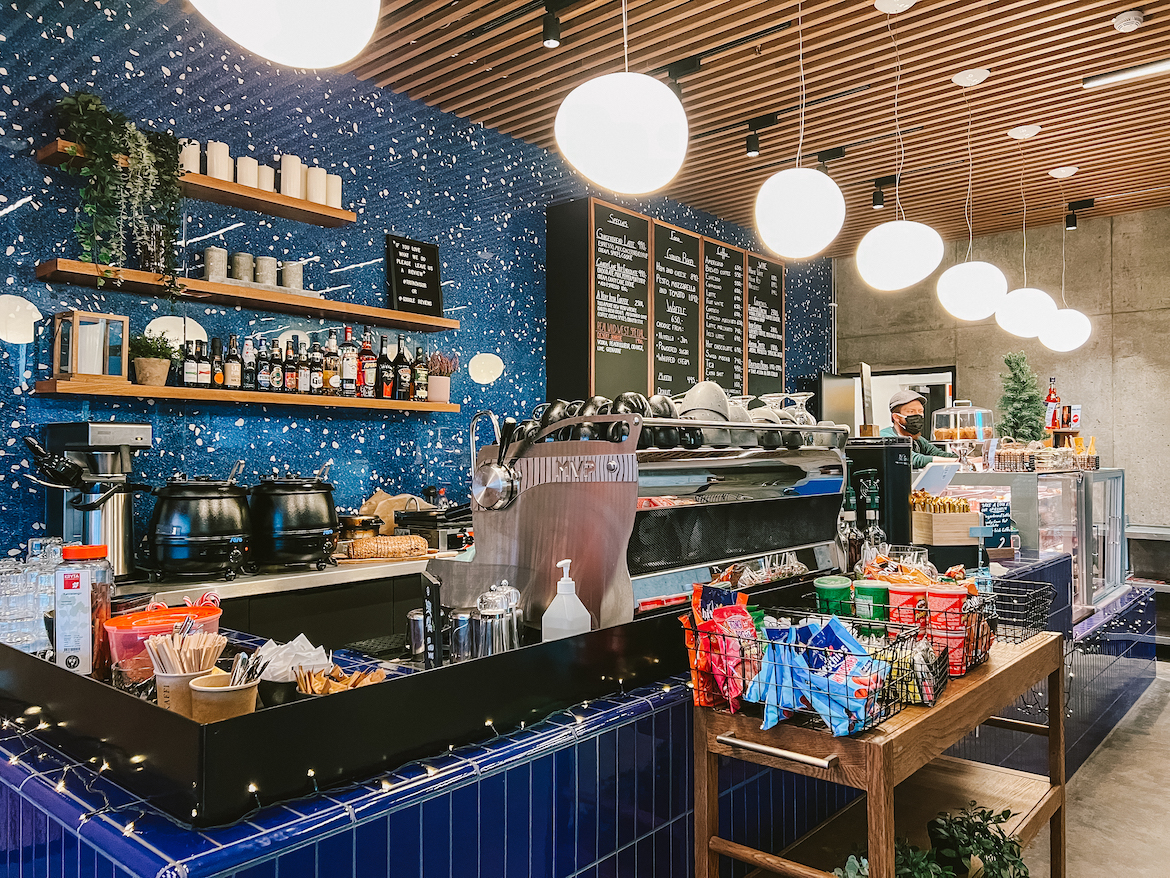 The cafe at FlyOver Iceland

The full FlyOver Iceland experience lasts about 30 minutes, and is the perfect activity to include on a quick Iceland stopover or when the weather isn’t cooperating, since it’s entirely indoors. 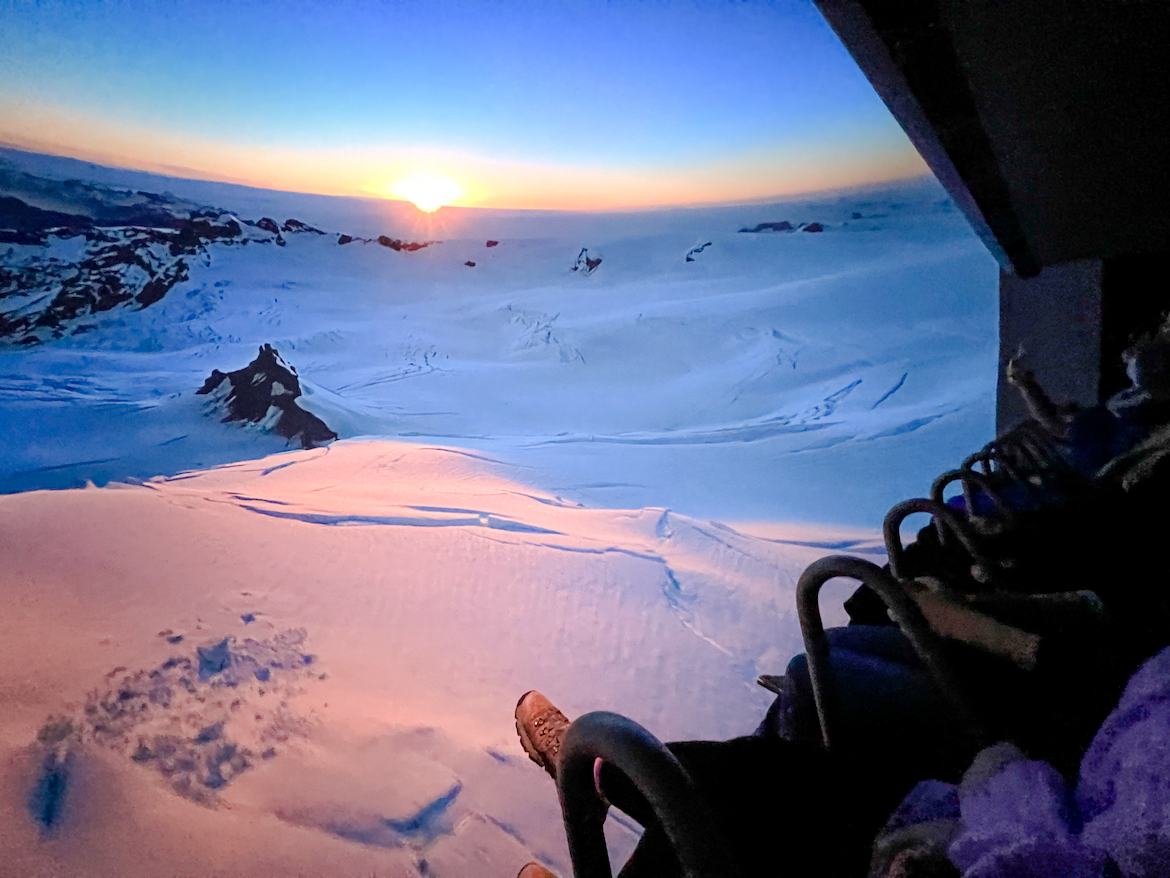 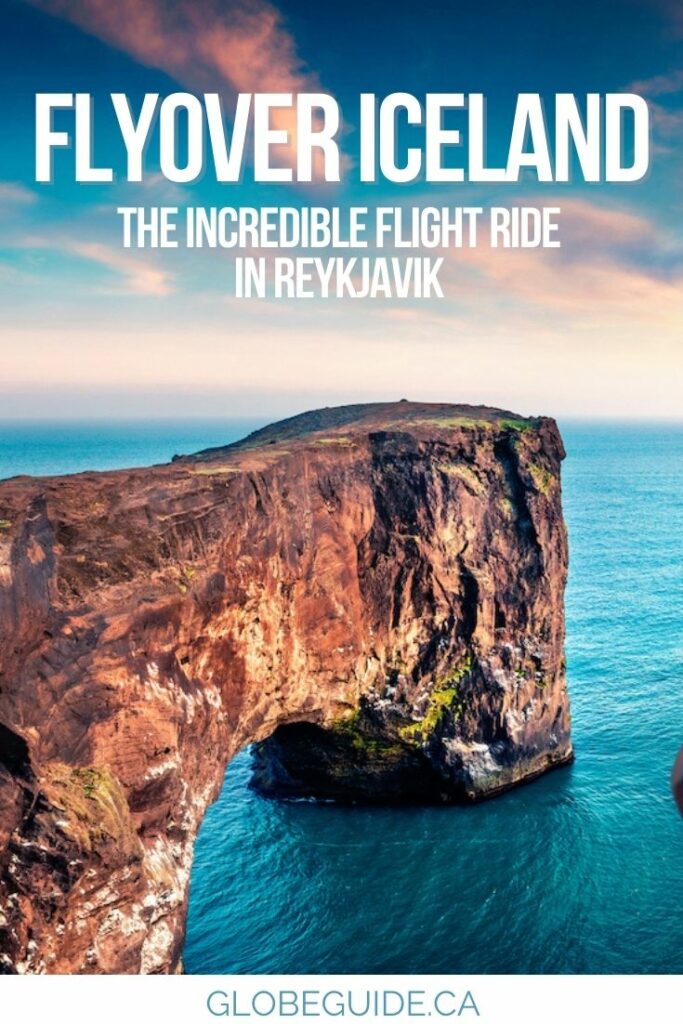 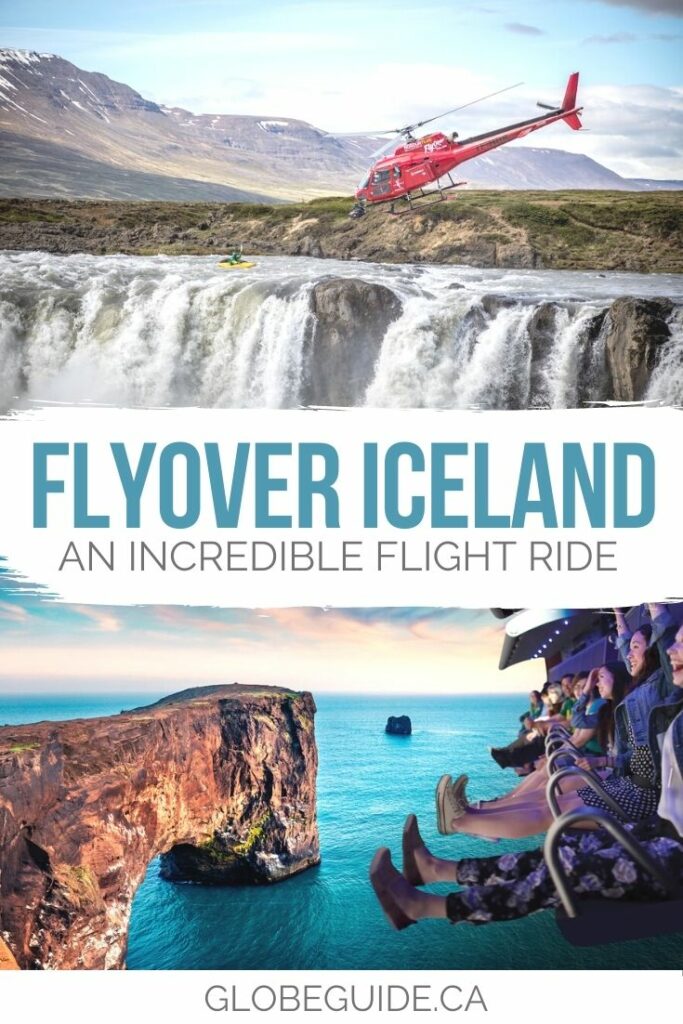 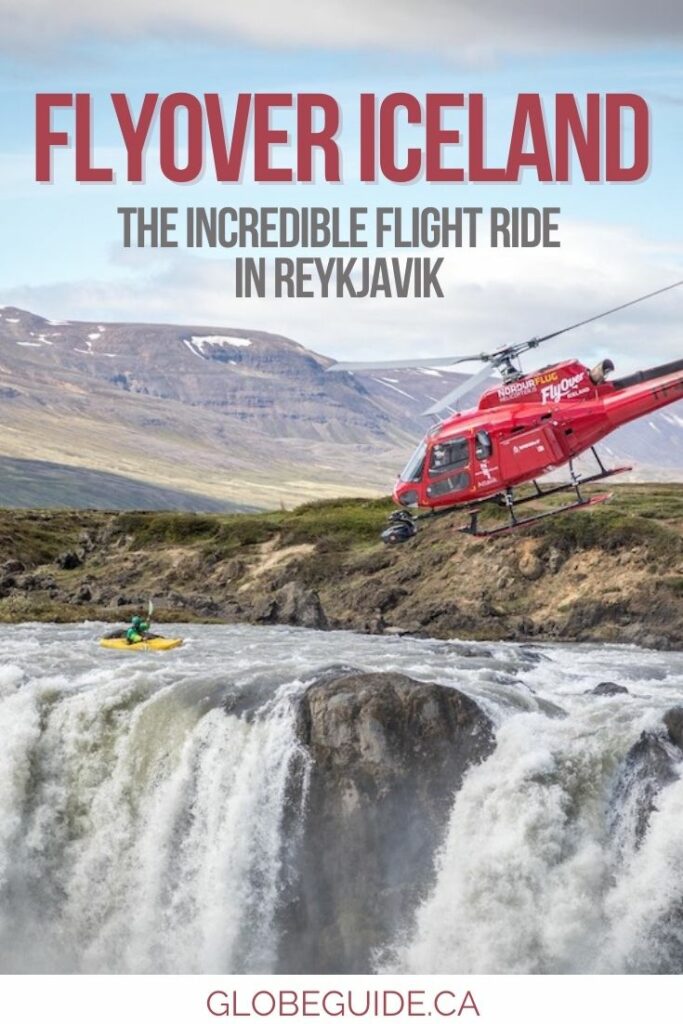