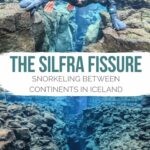 Between layers of Merino wool, a thermal undersuit, drysuit, and a neoprene hood fastened so tightly around my head a plastic choker had been used to secure it, performing an awkward waddle felt like the only way I could maneuver around.

And I was going to need every inch of that protection for today’s unforgettable adventure: snorkeling between two continents at the Silfra Fissure in Iceland. In the middle of winter. 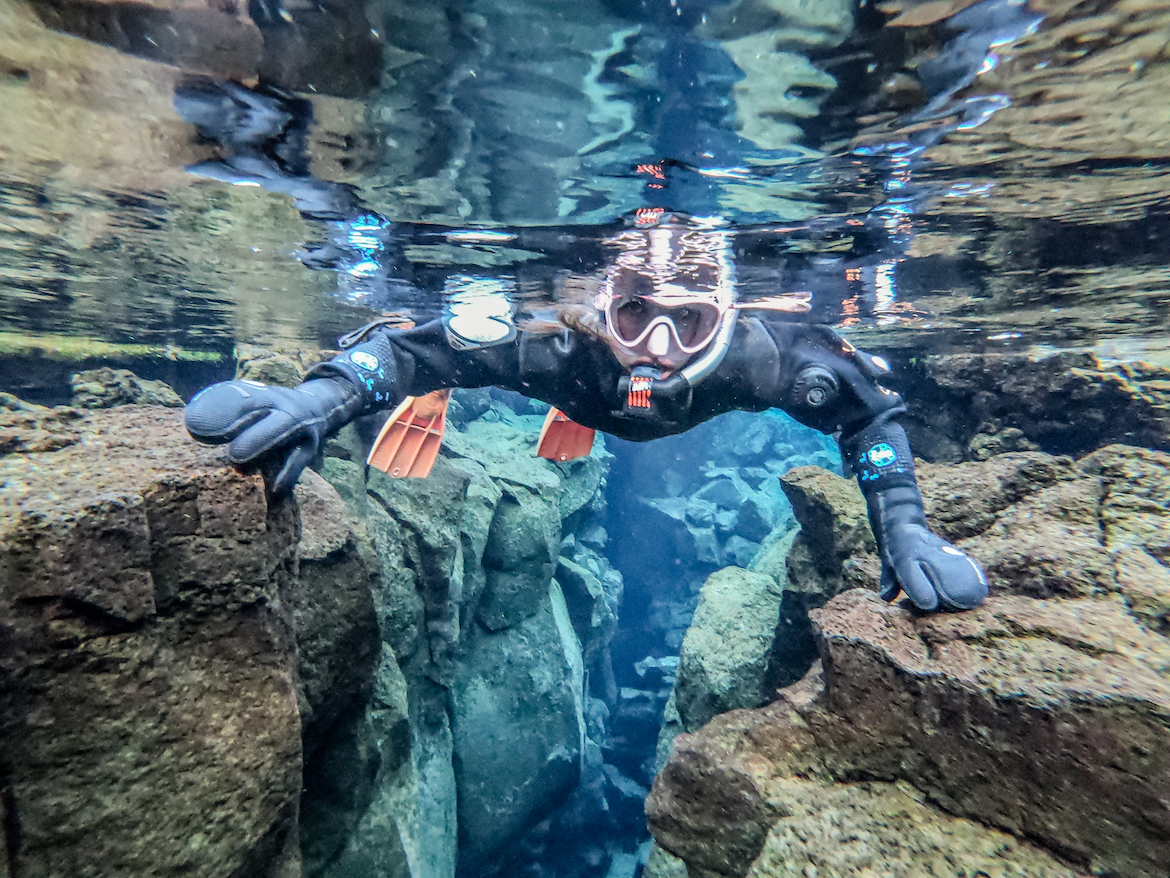 On this frigid December day, I found myself in Thingvellir National Park (Þingvellir), a UNESCO World Heritage site smack dab between North America and Europe in a valley where the tectonic plates drift further apart each year.

Located a one hour drive from Reykjavik, it’s considered one of the world’s top dive and snorkeling sites thanks to incredible visibility of up to 100 metres. While the water is too cold for anything to live here, the temperature doesn’t fluctuate much which is why you’ll find people snorkeling in Silfra Fissure all year long, making this one of the most unique things to do during winter in Iceland. 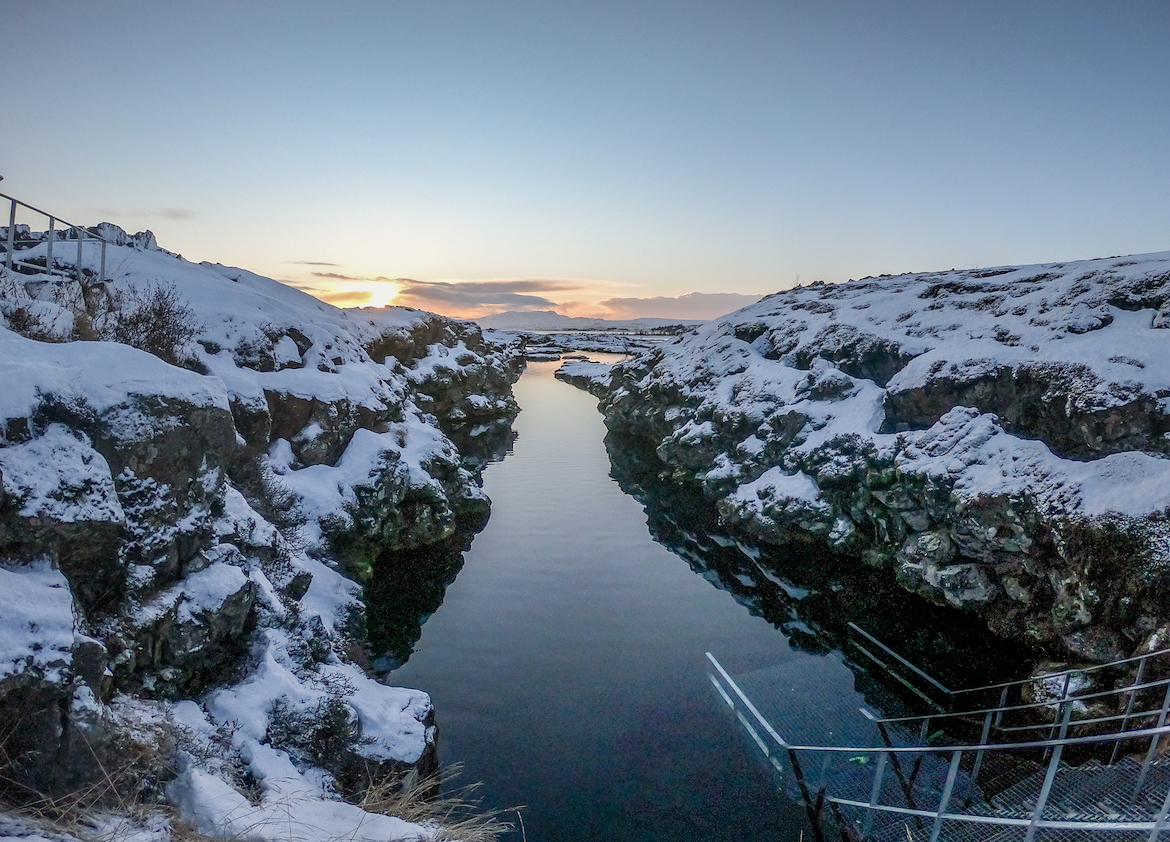 Our group of five arrived at the site mid-afternoon, as part of the Golden Circle & Snorkeling in Silfra tour led by Troll Expeditions. While those tight on time can make a special trip here just to dive or snorkel, budgeting a full day means the chance to see other incredible attractions around the iconic route like the Gullfoss and Oxarafoss waterfalls and the Geysir Geothermal Area.

A large box truck was set up in the parking lot, a space heater slightly warming the makeshift change room where we slipped off our outerwear and slid into dry suits that looked like something more befitting of a race car driver. It was there that our guide Anna Gerber began the briefing, outlining all of the equipment we’d be wearing to stay mostly-dry including gloves, booties and hoods. 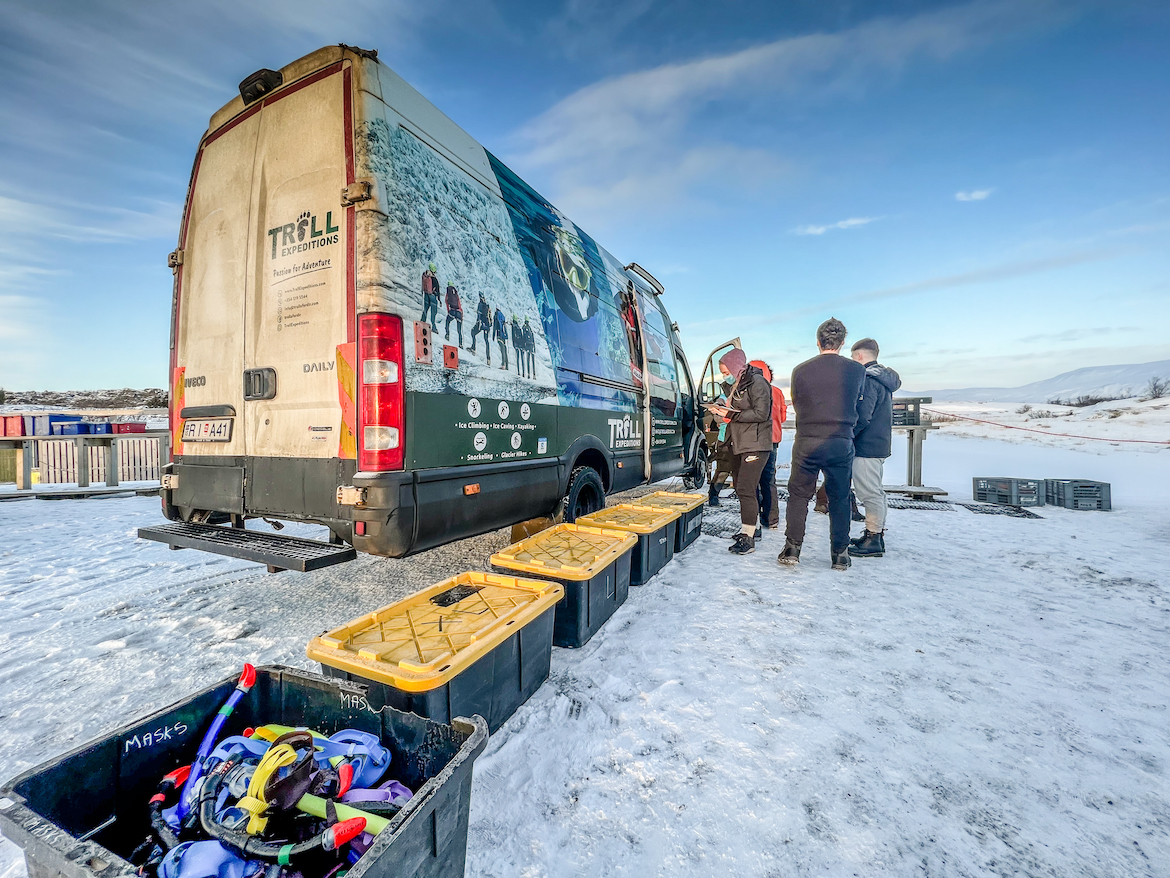 “In order for it to work, it needs to be tight around your neck and wrist,” she explained, as we hesitantly left the warmth of the truck to head back outside to the next round of gear which sat frozen in buckets.

“This is wetsuit material. That means your head and your hands are going to get wet. It works quite well, and what happens is the cold water comes inside, you heat that up with your body temperature so you’re going to be comfortable enough to stay in the water for around 45 minutes.” 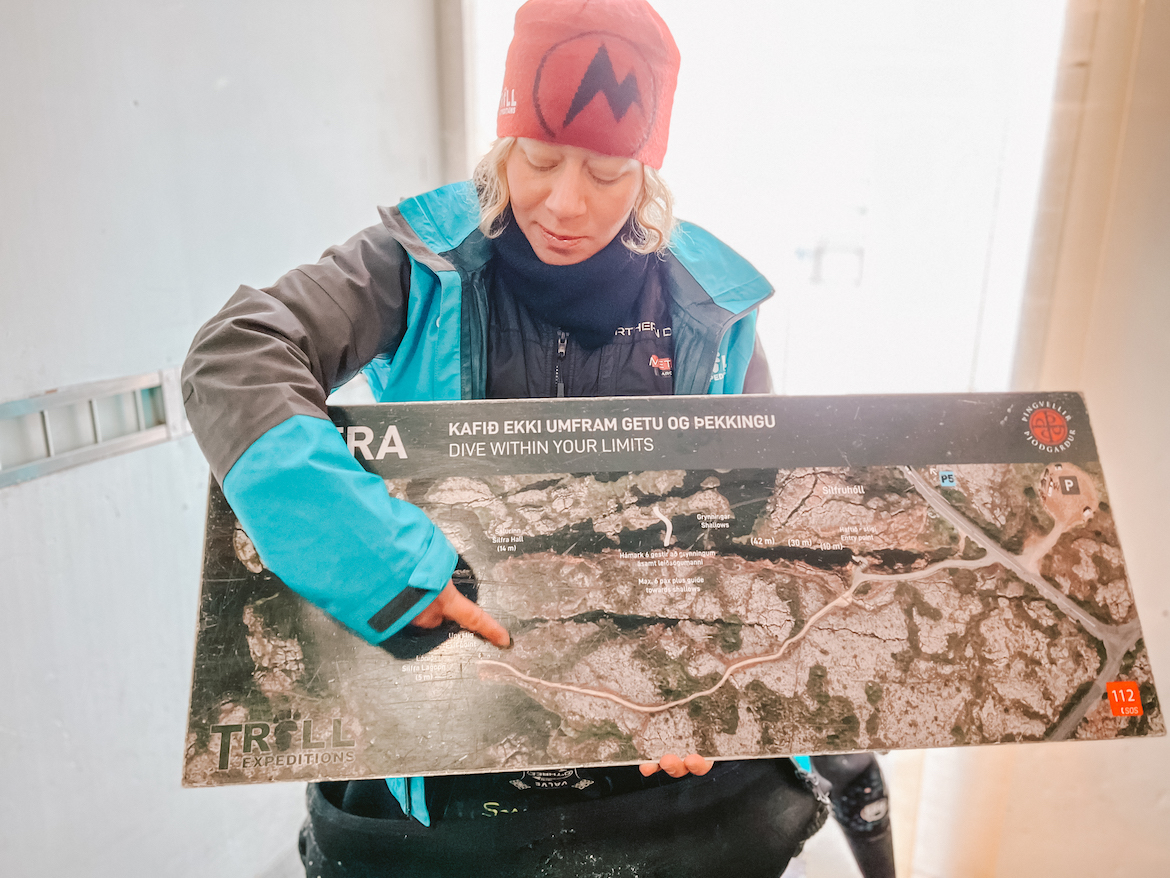 Cue the jumping jacks. Determined to soak up every last second of warmth before plunging into the frigid glacier water, we channeled our inner Jane Fonda and started a spontaneous ‘80s aerobics class complete with lunges and squats as Gerber fastened each of us into drysuits.

Despite the effort we were exerting, Gerber was definitely working harder: the suits, gloves and neoprene hoods are incredibly awkward to get into, and I had flashbacks of those scenes in movies set in the 1800s where girls cling to a bedpost as their mothers tie corsets around their tiny waists. After a lot of grunting, tugging and contorting our necks to push through the thick material, we were finally all geared up and ready to go. 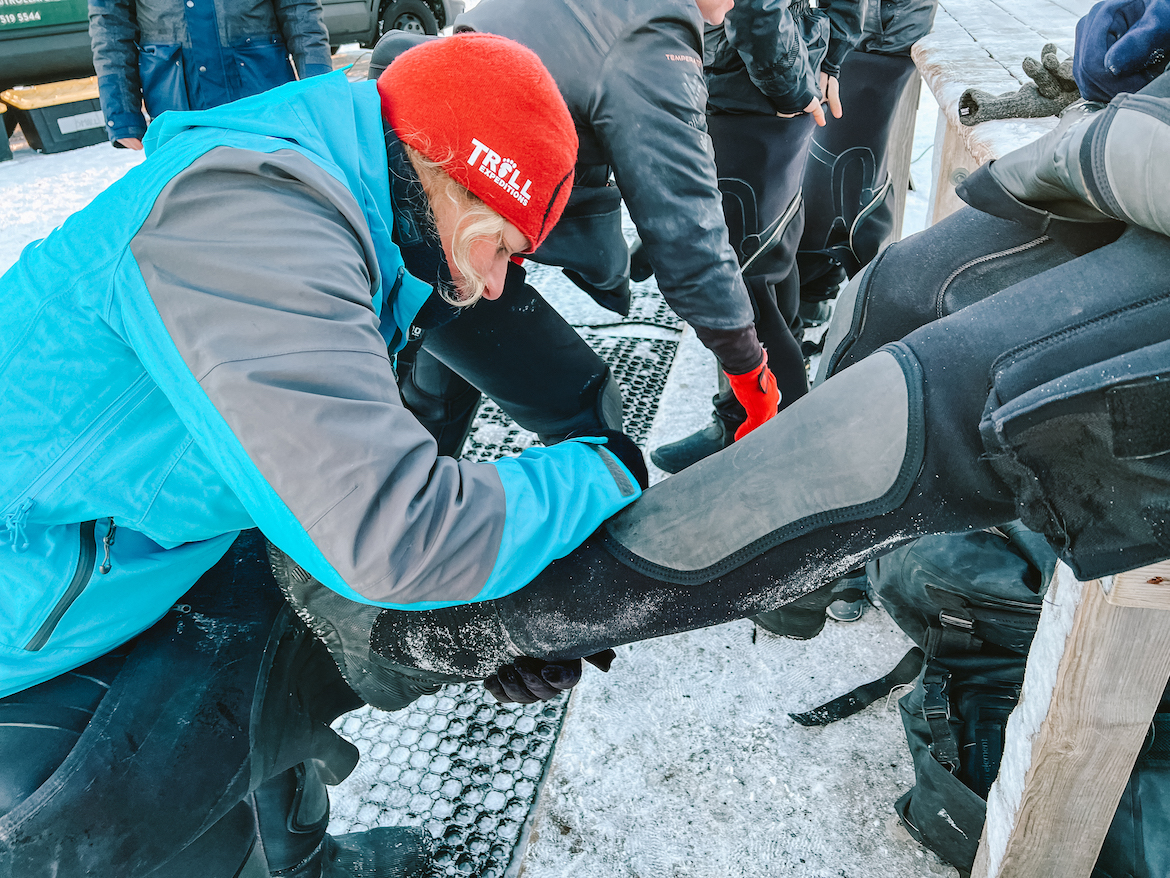 We made our way down the snowy pathway, the sky a soft pink overhead as the early winter sunset cast a rosy hue over the tranquil lagoon. Snow dusted the boulders framing the Silfra Fissure, and despite griping a mask and snorkel I still couldn’t believe I was about to do something as crazy as jumping into glacial water just days before Christmas.

Bravely taking the lead, I made my way down the steel steps. Gingerly dipping a toe in, I was shocked–I could barely feel anything! The super suit was doing its job, and with a newfound confidence I plopped into the water. 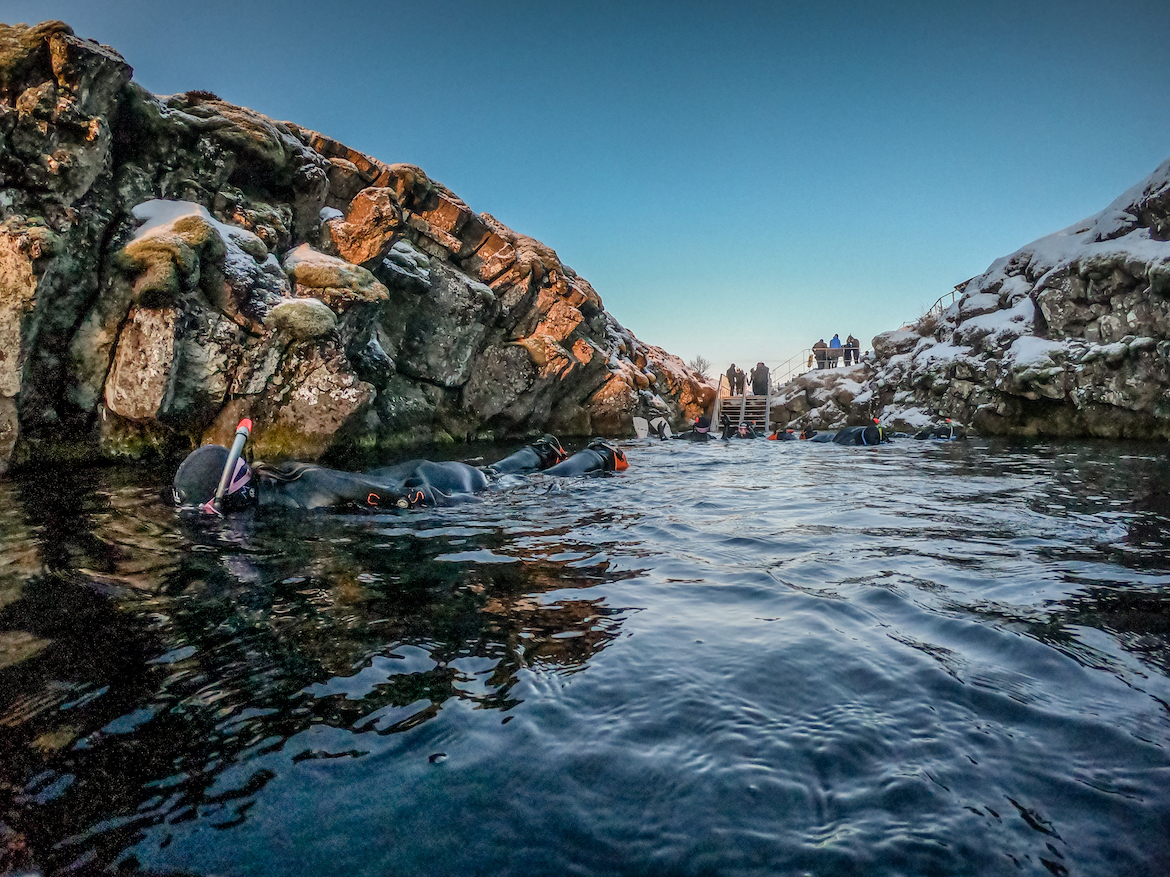 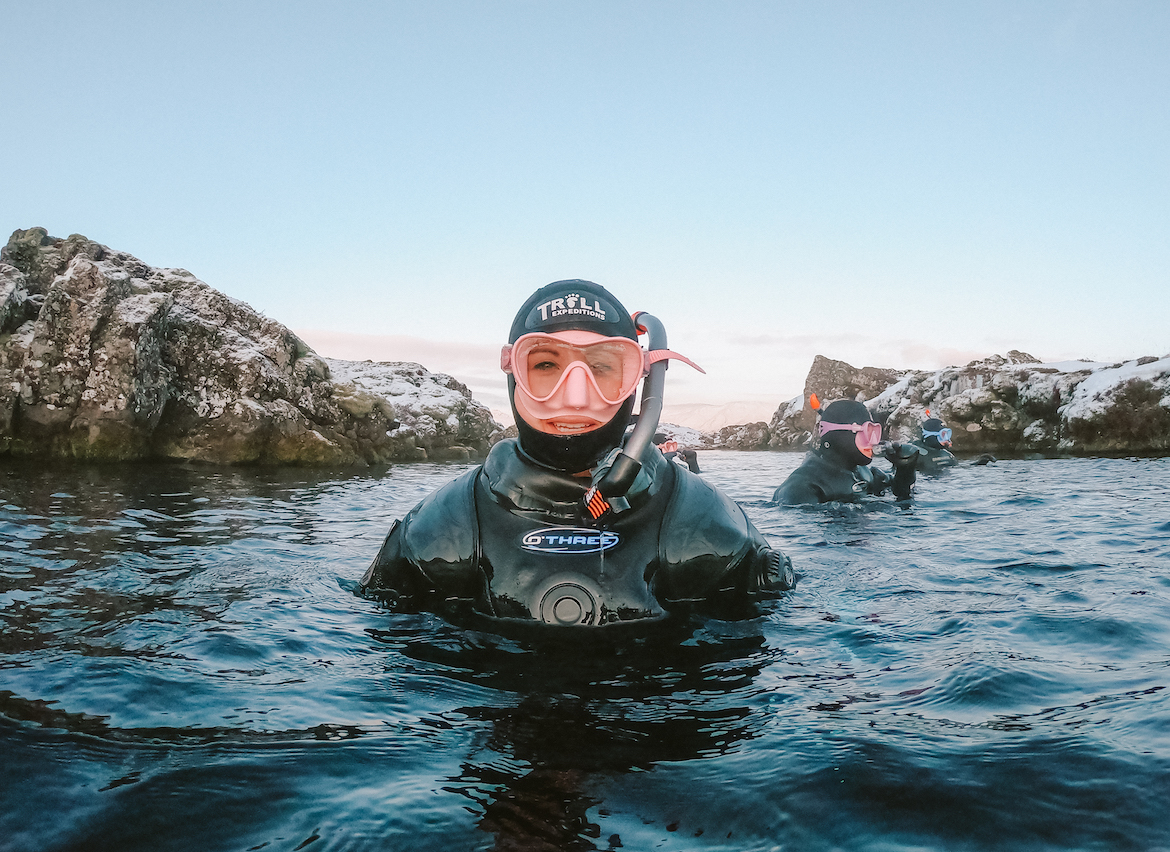 The air in the drysuit resulted in an unexpected buoyancy, and I found myself effortlessly floating on the surface in a way I can only imagine an astronaut experiences. Thanks to the light current propelling me forward, there was nothing more to do than simply put my head down and enjoy the awe-inspiring views of the underwater world below. 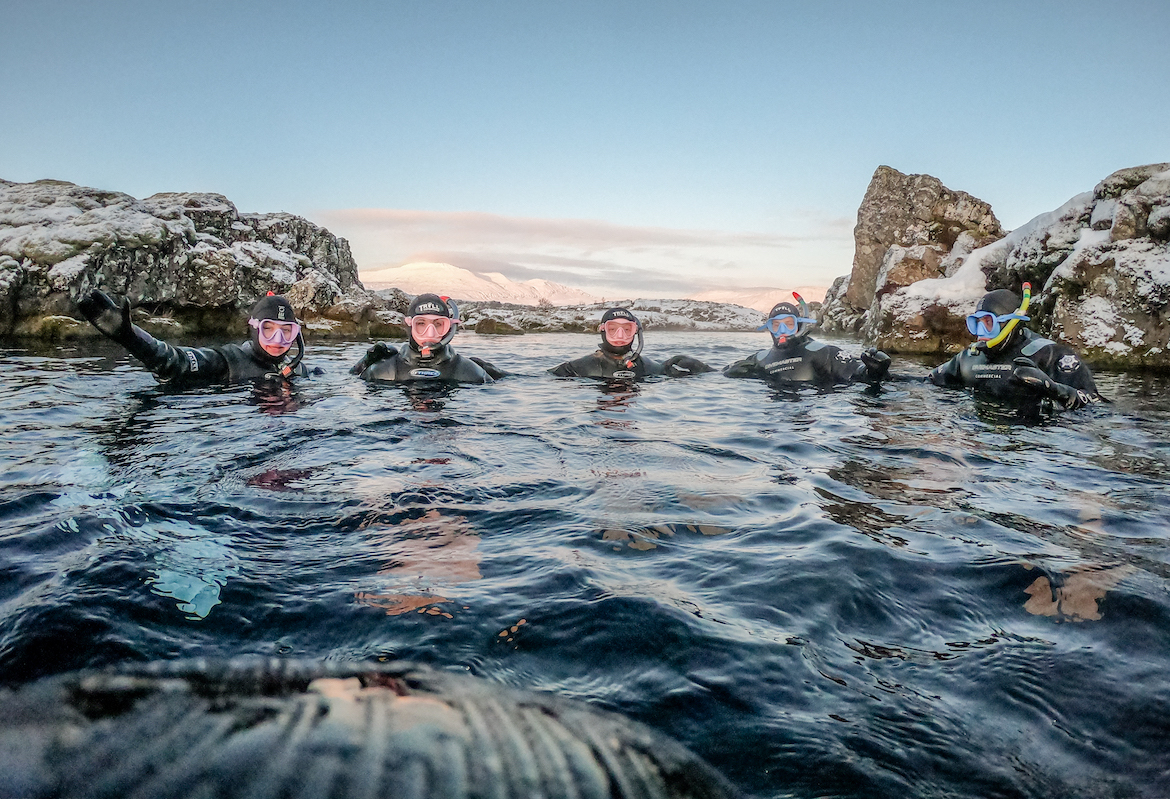 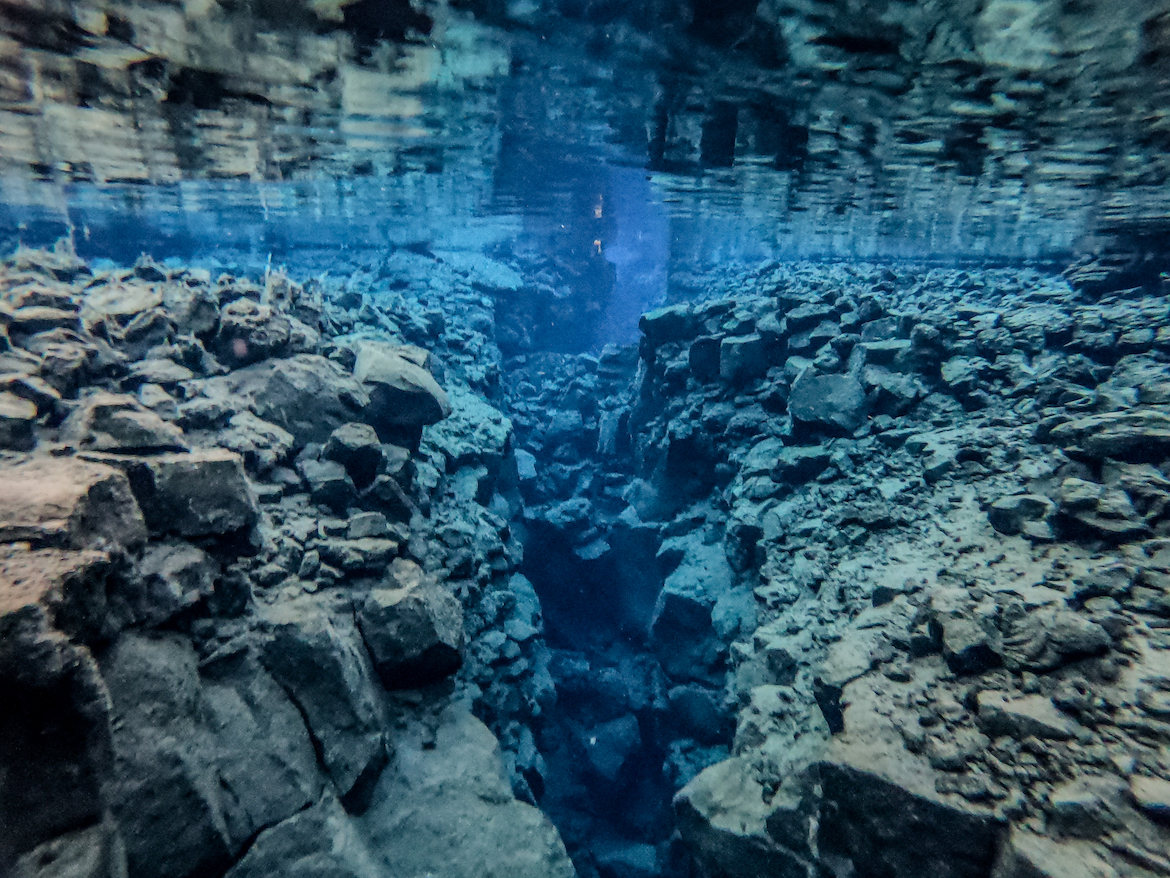 The Silfa rift is a narrow volcanic canyon, and the only place on the planet where you can snorkel between the continental plates which are slowly drifting apart, making it a geological masterpiece. 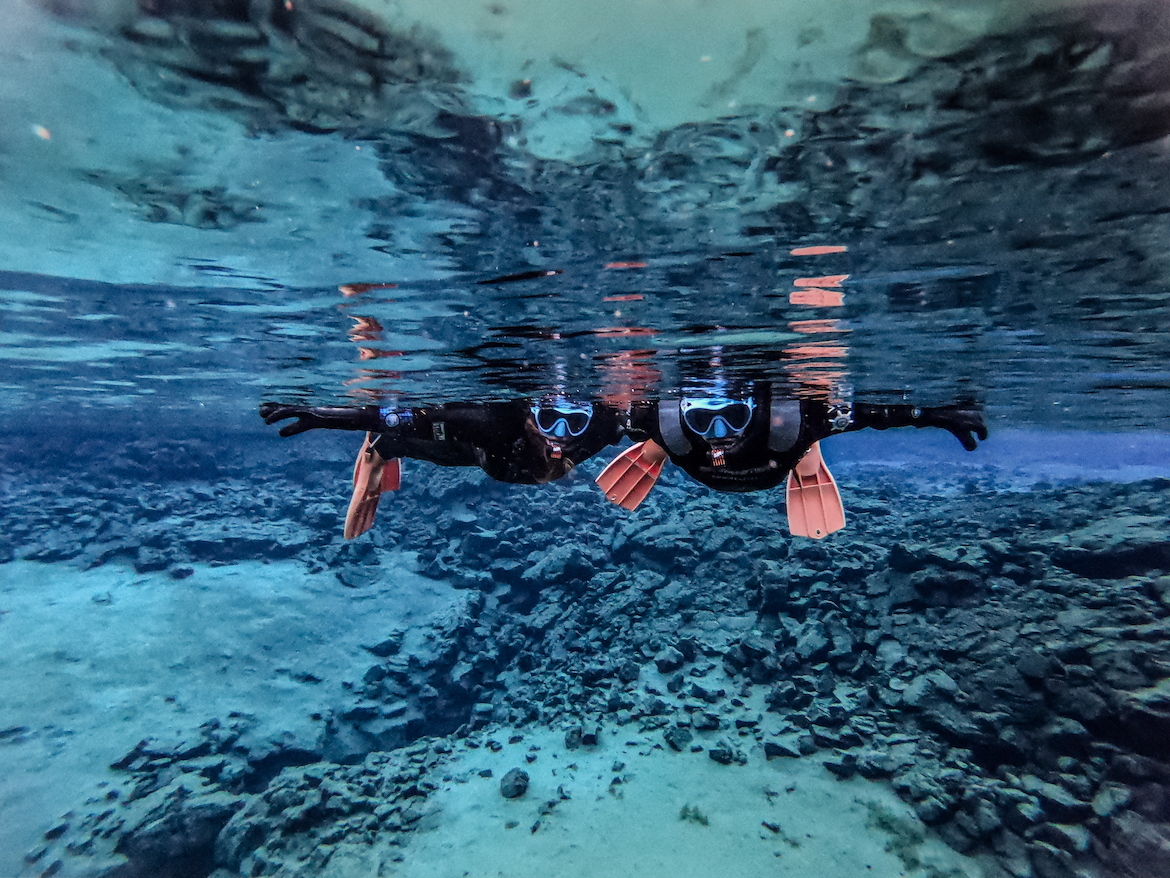 “From the beginning here you can actually see all the way to the end which is about 80-100 metres of visibility, so some of the clearest waters in the world,” Gerber explained as we funneled through the cerulean crevasse of Silfra Hall toward Þingvallavatn Lake. “You can see the two tectonic walls going down at [Silfra] Cathedral, down 22 meters deep.”

It didn’t take long for our exposed faces and water-logged fingers to feel the chill of the surroundings, but the beauty of it all was a worthy distraction. I heard whoops and hollers behind me as a couple of Brits were overcome with excitement at the mesmerizing sight, spread out before us as far as the eye could see. 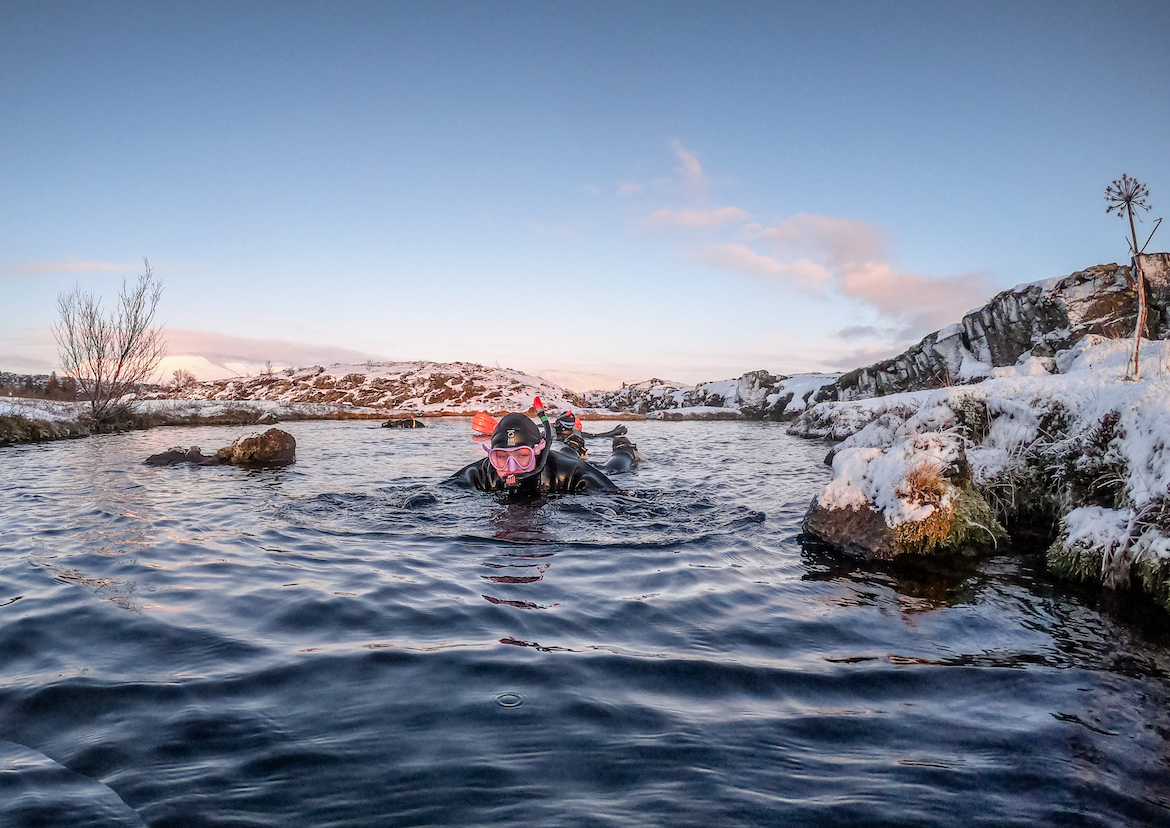 The next half hour flew by as we floated through supernatural hues of blue water, past jagged rock formations and lava-rock cliffs. After posing for a quick photo-op, Gerber instructed us to frog-kick to the left as we made our way around a bend and back toward the shoreline for the finale: Baby Silfra. Also known as ‘The Real Blue Lagoon,’ the shallow oasis has only been around since 2008.

“The two tectonic plates are constantly pulling on each other,” Gerber explained, “and when there’s a new earthquake it opens up new cracks.” 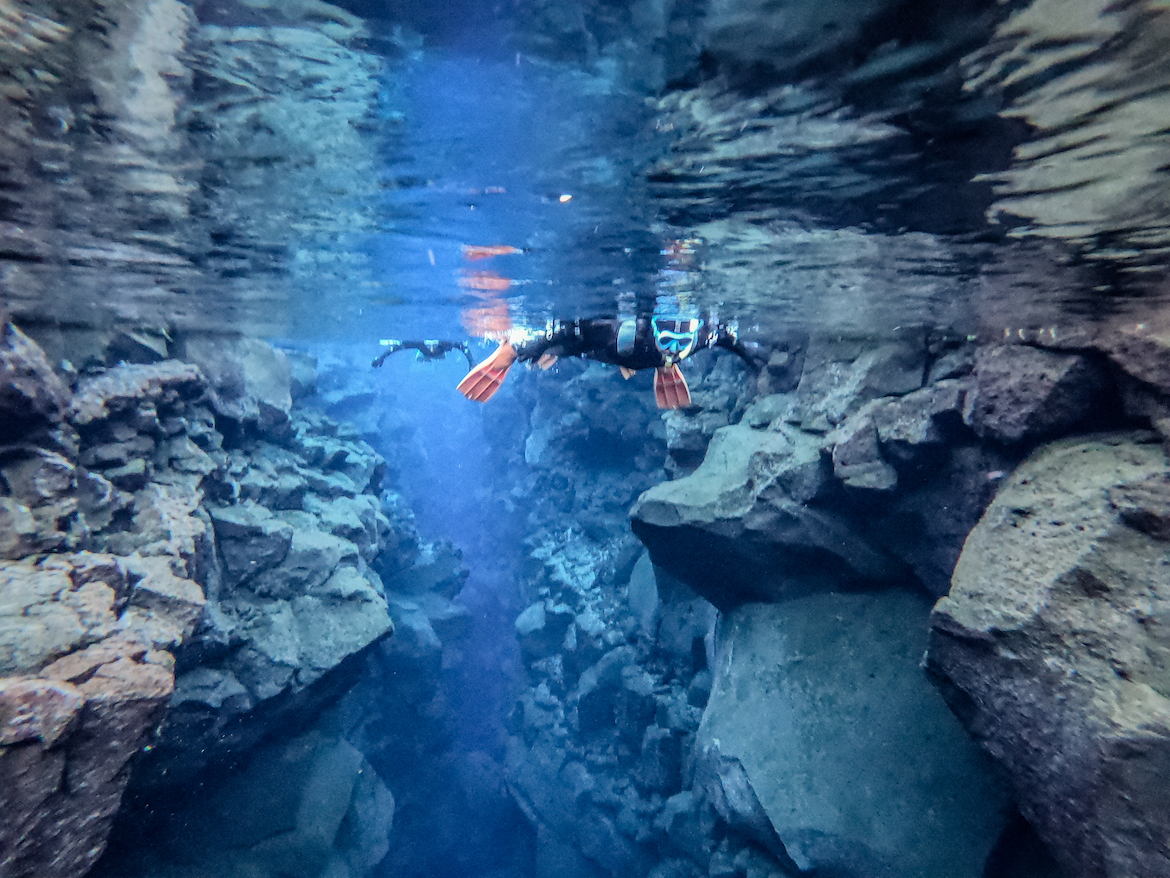 Another set of stairs beckoned, and I pulled myself up out of the water feeling invigorated yet exhausted from the numbing cold all at the same time. Waiting for Gerber to swim over to help pull off my flippers, I laughed as I realized I was literally frozen to the steps and metal railing; it turns out neoprene is no match for Icelandic winters. 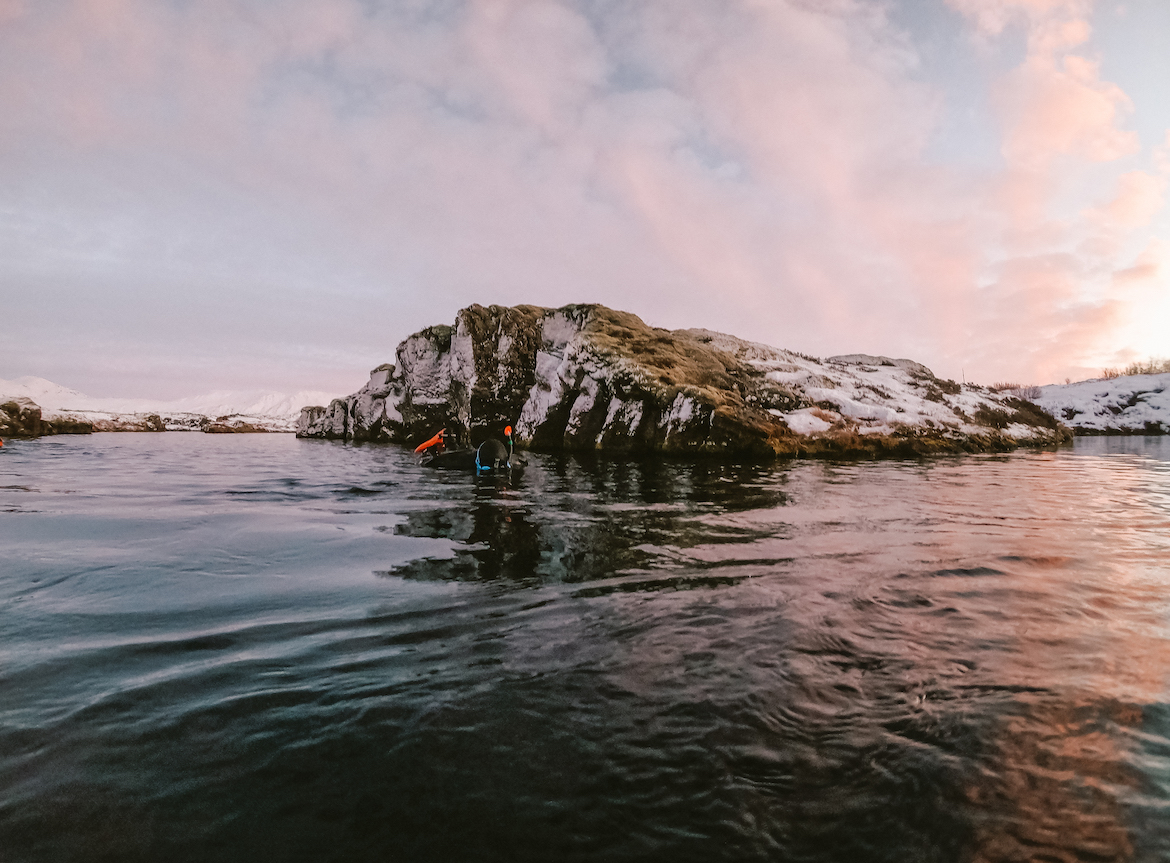 Once the rest of our crew had emerged from the Silfra Fissure, we began the short walk back to the entrance, our wet booties crunching against the snow-covered pathway. Steaming mugs of hot cocoa were waiting, and we gratefully slid out of our soaking suits and bundled up in our cozy winter clothes.

Our brains buzzing with excitement and a feeling huge sense of accomplishment, we hopped back in the van to drive back to Reykjavik as darkness fell.

We’d officially done it: the crazy adventure of snorkeling in Iceland’s Silfra Fissure during winter. 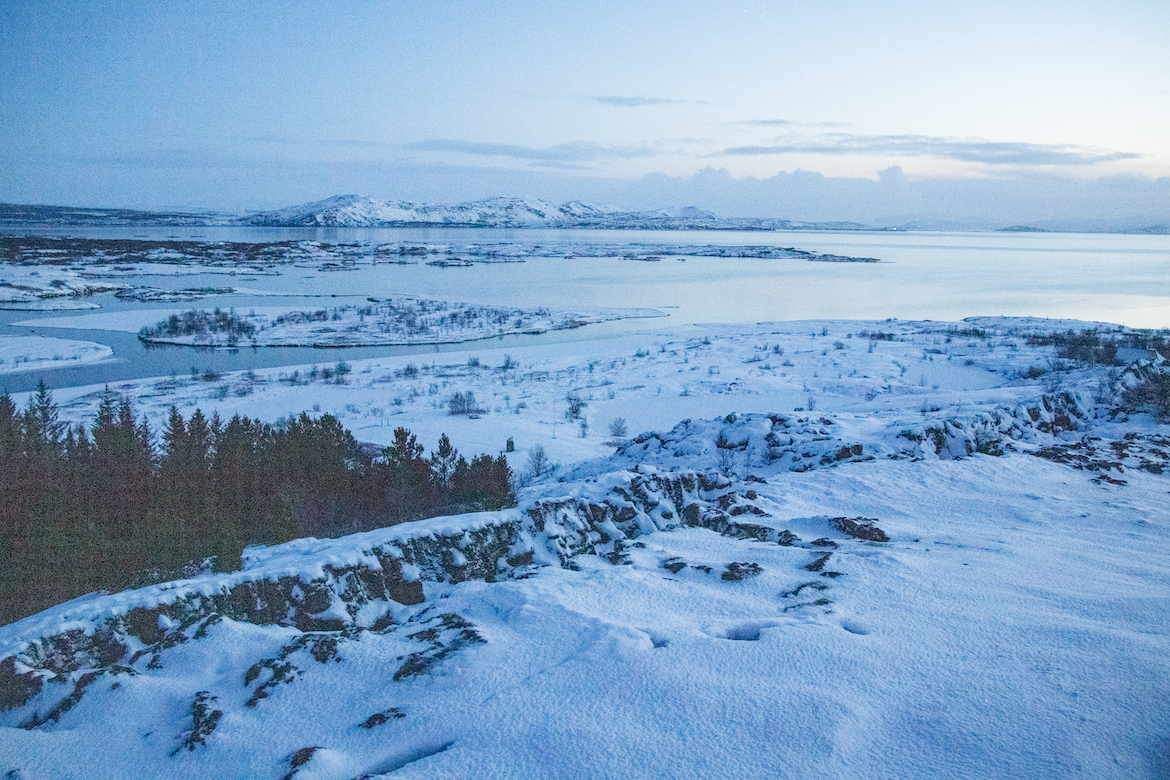 Four different companies operate tours each day with a maximum of six guests per guide, including Troll Expeditions which offers a few different options including the Golden Circle and snorkel tour combo. Transportation and gear are included, as well as GoPro photos that the guide takes during the 45-minute adventure. Click here to book

Since the national park is protected, the only way to experience Silfra snorkeling or diving is on a guided tour with a licensed operator. A few good options include:

Globe Guide experienced the Silfra Fissure in collaboration with Troll Adventures. As always, hosts have no editorial influence on articles 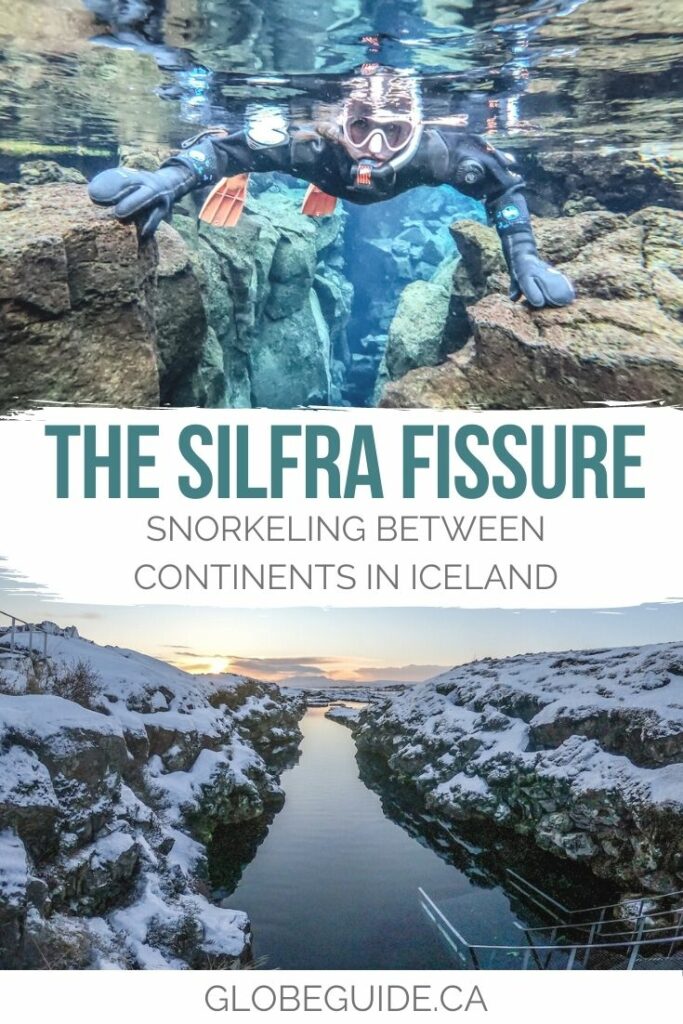 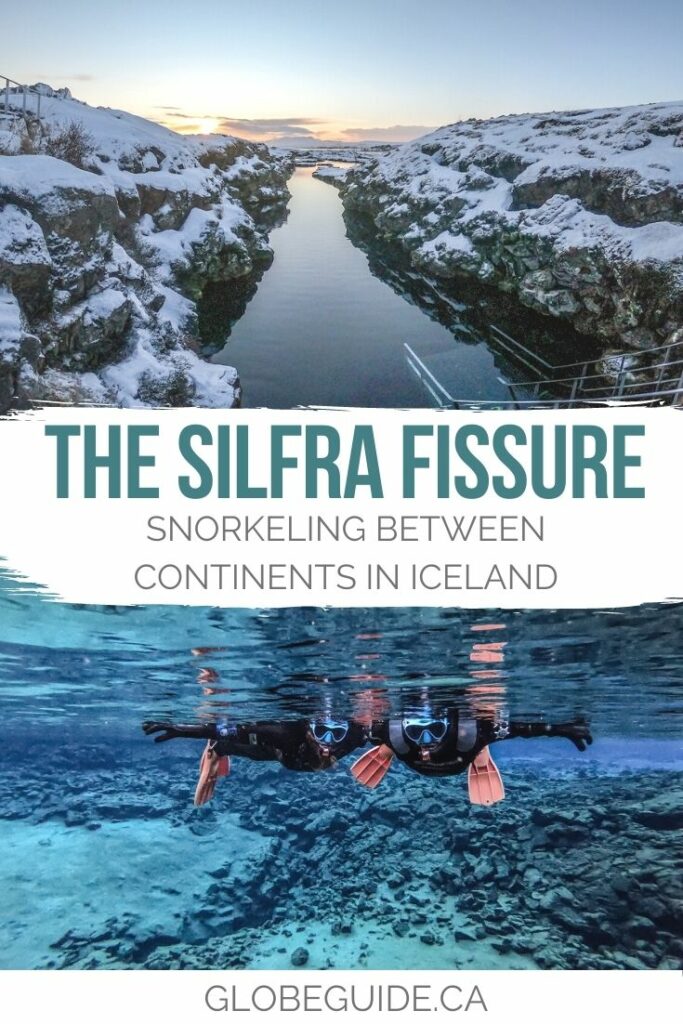 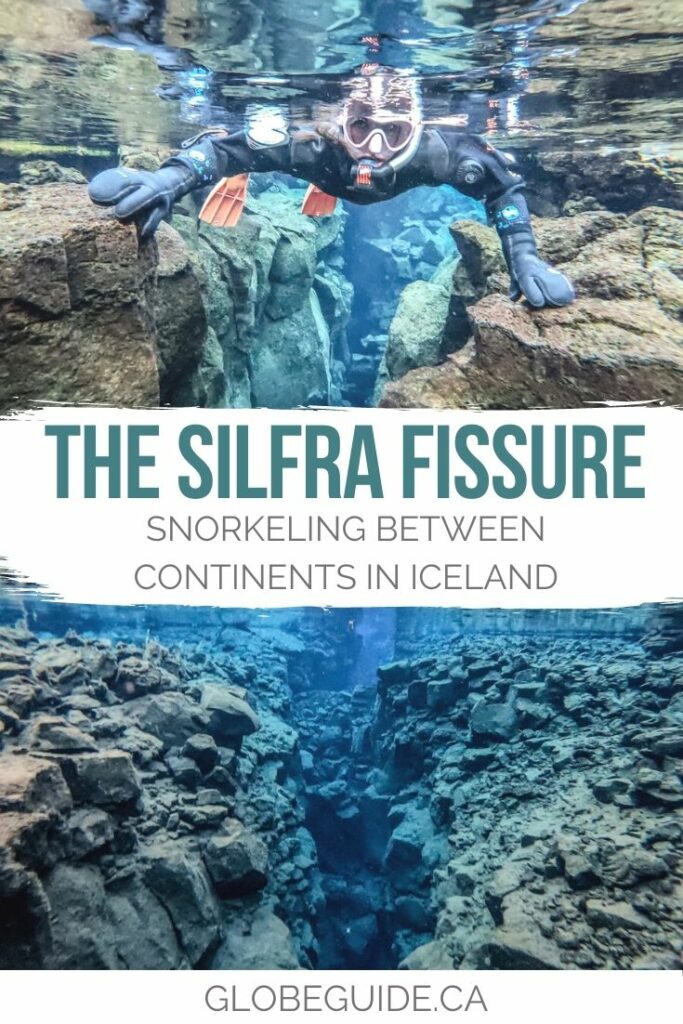