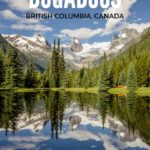 The whirring of the helicopter’s blades overhead sent vibrations into the rocky ledge we were crouched on, as our group huddled together bracing ourselves against the resulting gust. The thumping noise got louder and the force of the wind stronger, and just when it felt like we might be bowled over it subsided, granting us a quick reprieve. Out of the corner of my eye I saw our fluorescent-clad guide gesture us toward the chopper which had touched down a few feet in front of us, and we scooted toward the open door.

No more than 30 seconds later with seat belts tightly fastened, we pulled up and away from the rock face with our faces glued to the window, staring in wonder at the mesmerizing mountain scene below. No matter how many times we hopped in and out of that helicopter during our heli-hiking adventure with Canadian Mountain Holidays, the thrill never wore off. 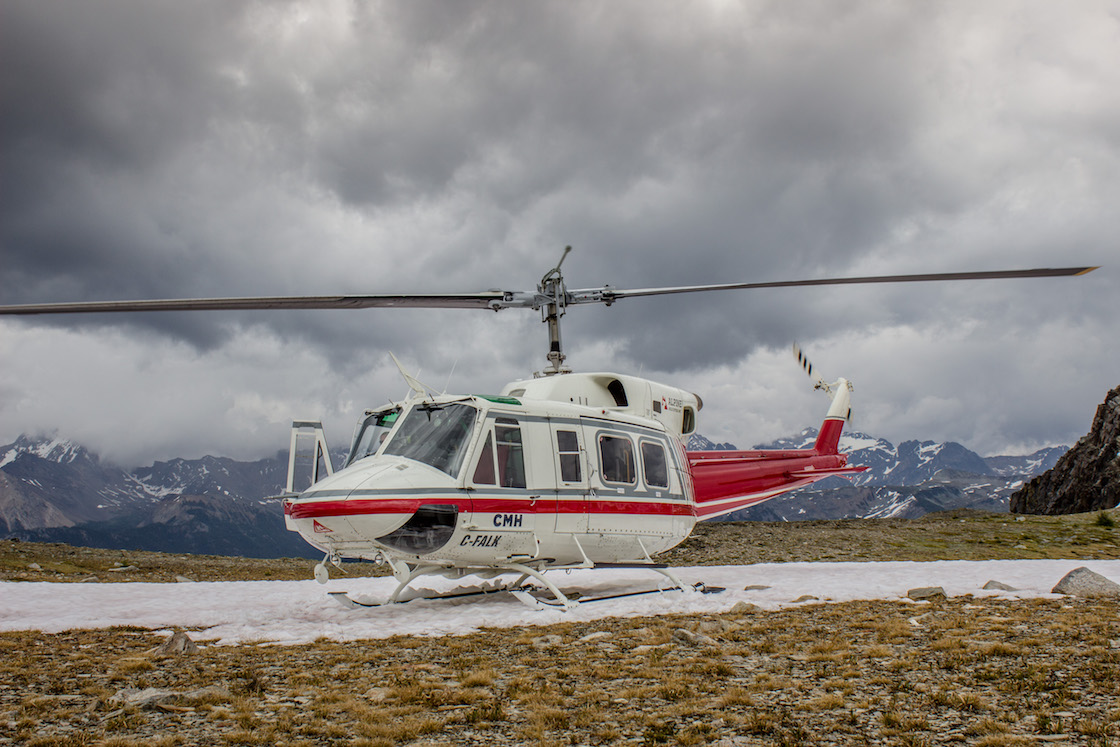 Just a couple days earlier I’d arrived in the mountain town of Banff, Alberta with a couple of friends, all of us buzzing with excitement about what the week had in store. We counted ourselves lucky that being from Calgary we didn’t have to travel far, as outdoor enthusiasts come from around the world to explore B.C.’s backcountry with CMH. The company—whose founder Hans Gmoser just so happens to have invented heli-skiing back in 1965—has a reputation for creating epic adventures under the watch of highly-trained guides. Add to that the fact that excursions are based out of remote lodges surrounded by nothing but epic scenery, and it’s no wonder people are willing to make the trip. 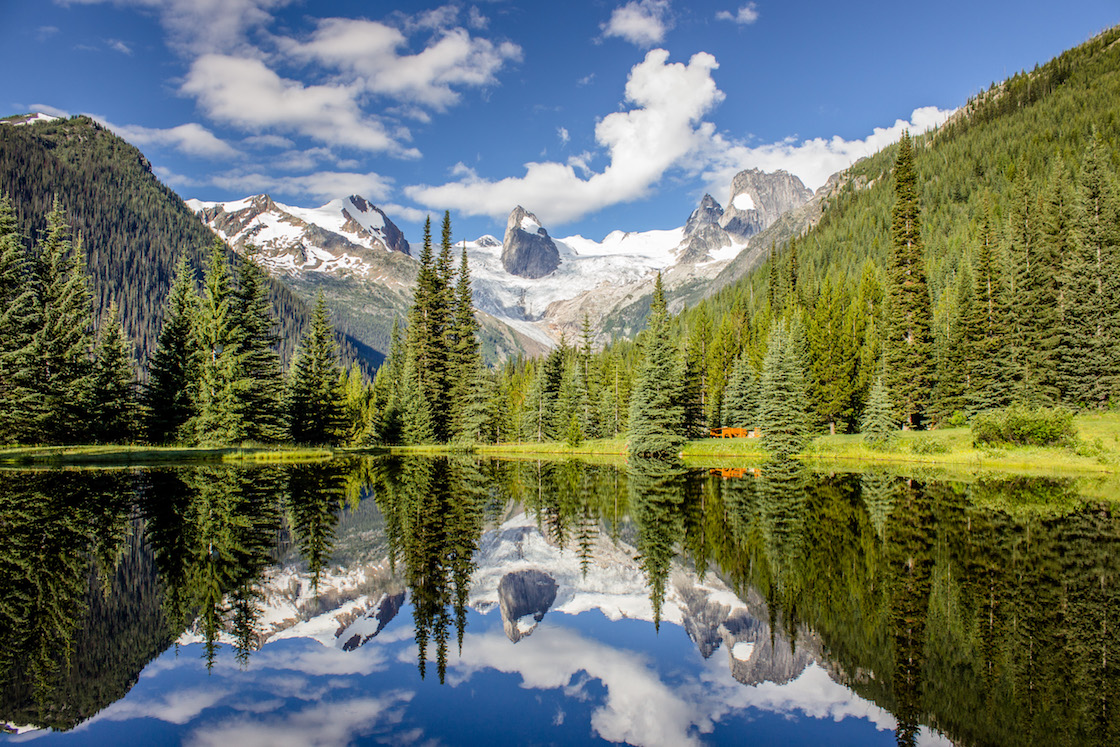 A view of the Bugaboos from the lodge

Our quick overnight in Banff meant an early wakeup to hop on the bus that would shuttle us across the provincial border and into Kootenay National Park, the gateway to our final destination: the Bugaboos, a mountain range in B.C.’s Bugaboo Provincial Park famous for its towering granite spires formed an estimated 75 million years ago. En route we were treated to views of emerald ponds, soaring mountain peaks shrouded in morning fog and even frolicking deer, before arriving at the takeoff spot located near Radium.

When we pulled up I was surprised to find we were in an empty, grassy field instead of a full-fledged heli-pad, but it later made sense when I saw first-hand what kind of terrain the bird was capable of landing on. It wasn’t long before I found myself strapped in to the Bell 212 helicopter, its engines roaring as we flew over the Spillimacheen Valley where a winding, turquoise creek provided a pop of colour among the thick green forests. 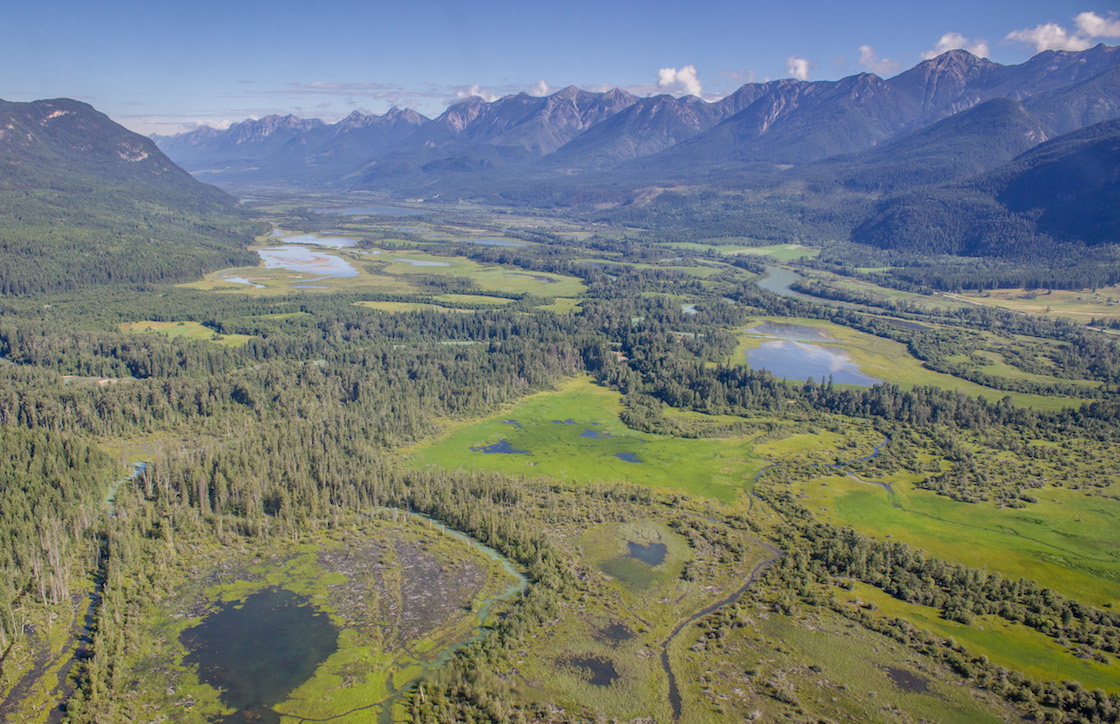 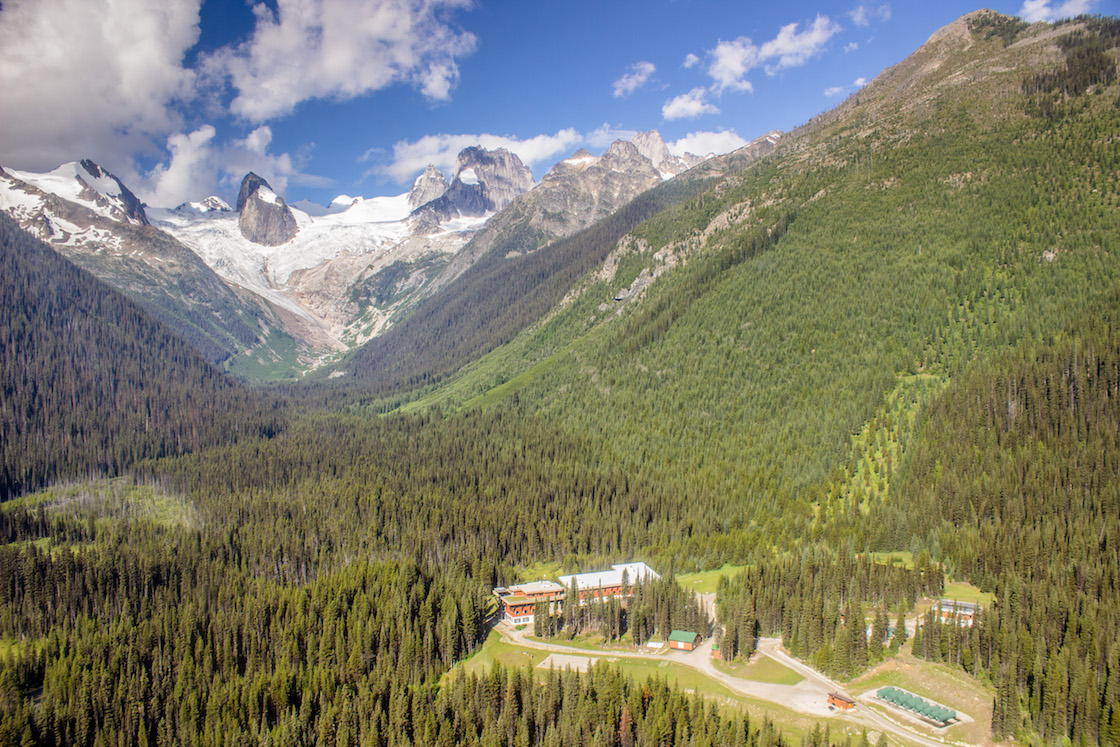 It only took about 10 minutes for the 80 kilometre journey, and we were greeted at the door of the stone-framed lodge by smiling staff members who managed to memorize all of our names immediately, much to the amazement of the approximately 40 guests. We were invited to unpack in rooms named after peaks like Thorington and Logan (my room was huge, with two queen size beds, a private bathroom and large windows with mountain views) before gathering in the gear room. 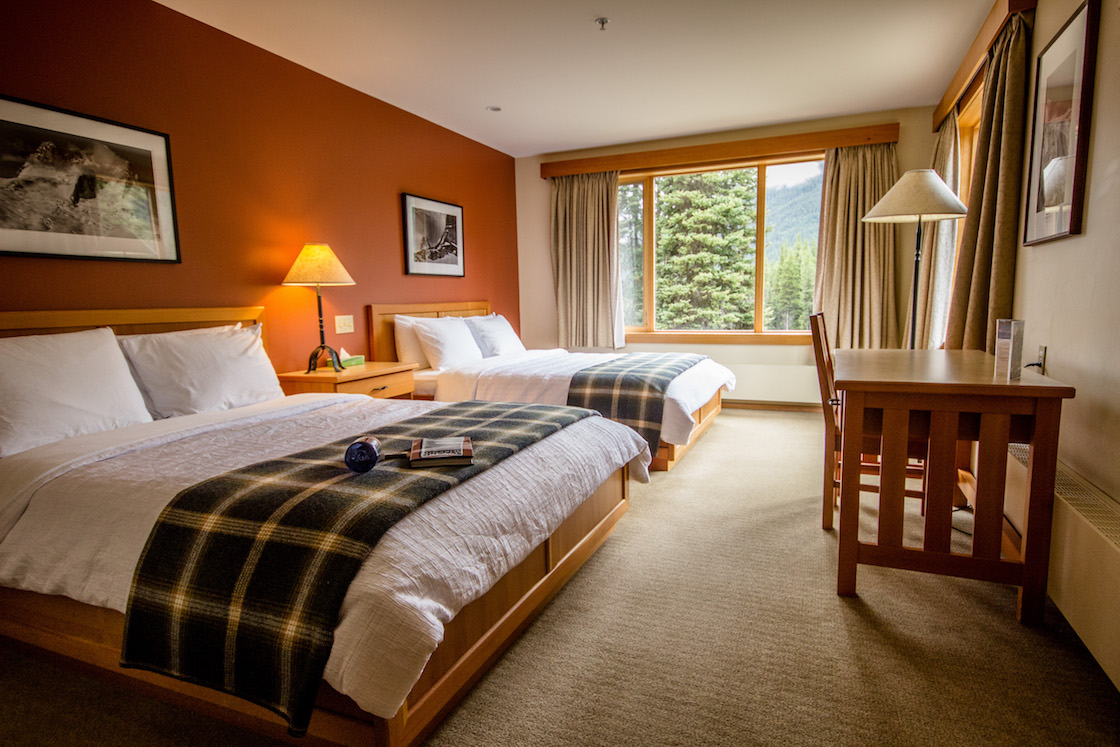 One of the rooms at the Bugaboos lodge 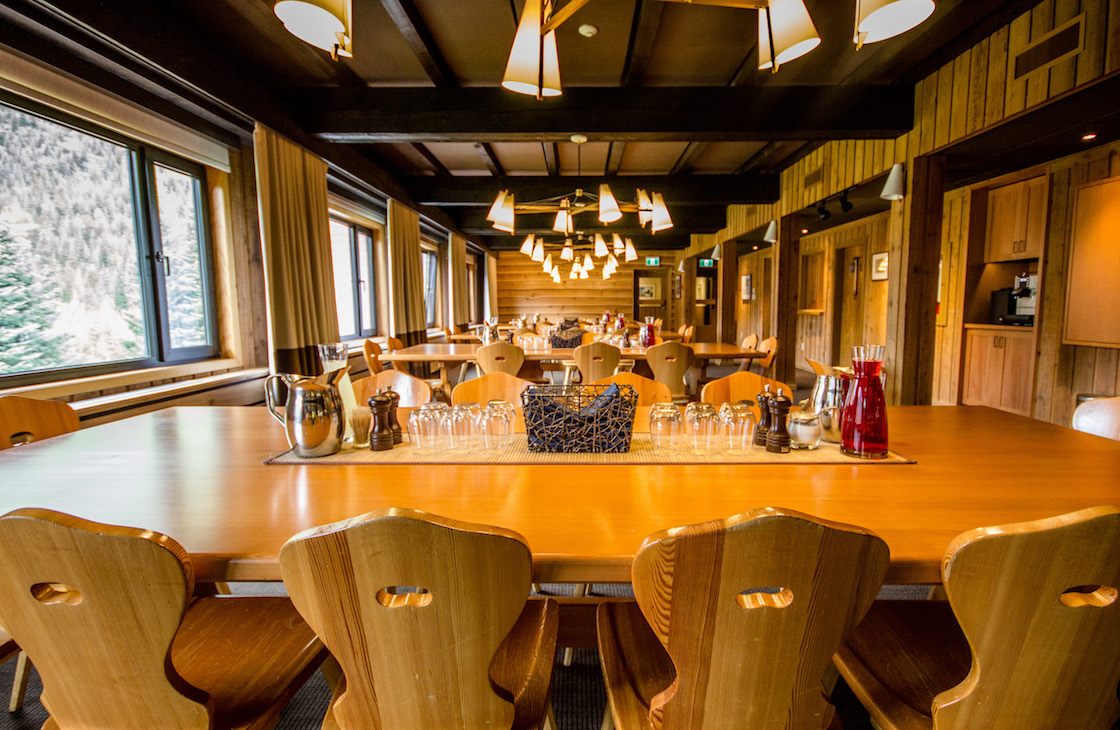 Even the most seasoned hikers might not have outerwear suitable for the sometimes fickle weather in the Bugaboos, so CMH provides everything their guests could need—prompting fellow guest Judi to remark that a heli-adventure would make the perfect surprise trip.

“You can arrive here in your street clothes never having done this, you could leave the office on a Thursday night with nothing!” she exclaimed. We grabbed rain suits, water resistant backpacks, poles and even hiking boots, which many of us ended up begging to bring back home as they fit so snuggly. 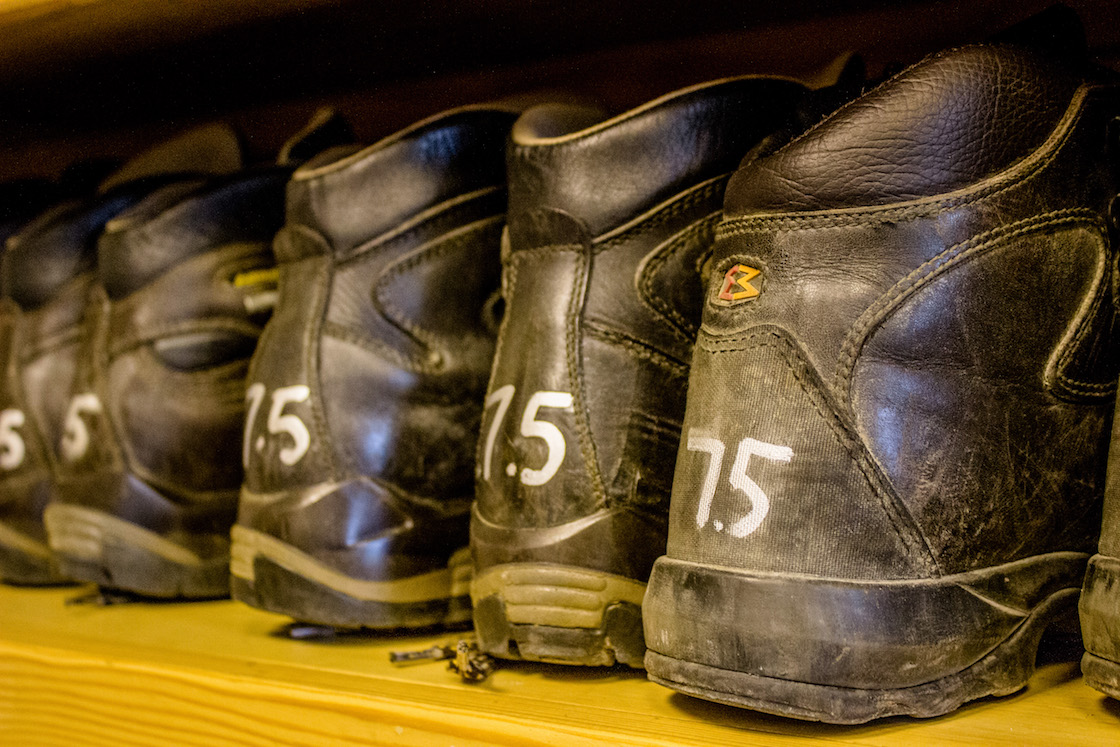 A hearty lunch served in the communal dining room followed, providing us with the energy to head out right away on our first heli-hiking adventure—after all, there’s no time to waste when one is lucky enough to find themselves in the heart of “The Bugs.” We headed outside for a safety briefing from the pilot, then just like that we found ourselves back up in the air, zipping toward the spires for our first foray into the backcountry. 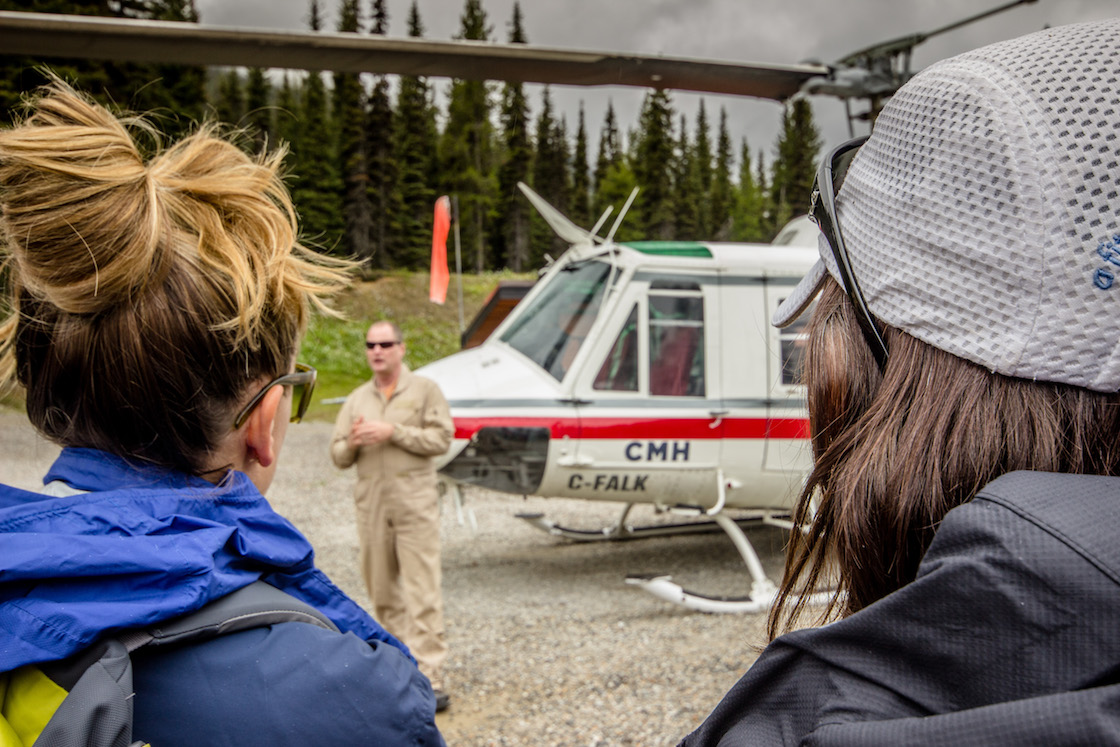 CMH split us into three groups to account for different hiking abilities, and the first stop for our crew was Taupe Lake. Boasting a vibrant turquoise hue, even the overcast day couldn’t dim its lustre, and we stared at it mesmerized while our guide Ryan talked about the marshy foliage and jagged peaks surrounding us. But as we started making our way past the “watermelon snow” (caused by algae which turns it pink, and even makes it smell sweet) and up a ridge, fog enveloped us. Dashing the hopes of the photographers in the group, the white mist quickly covered what would normally be an incredible vantage point. We had been Bugaboo-ed. 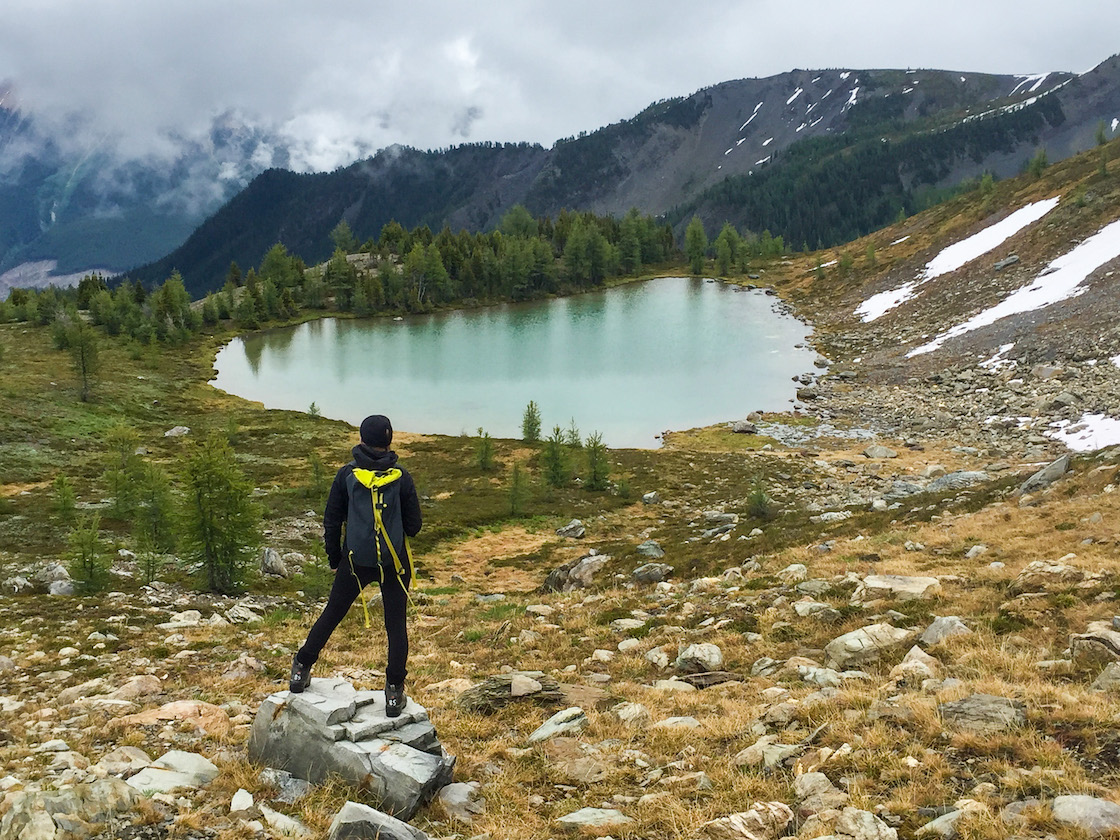 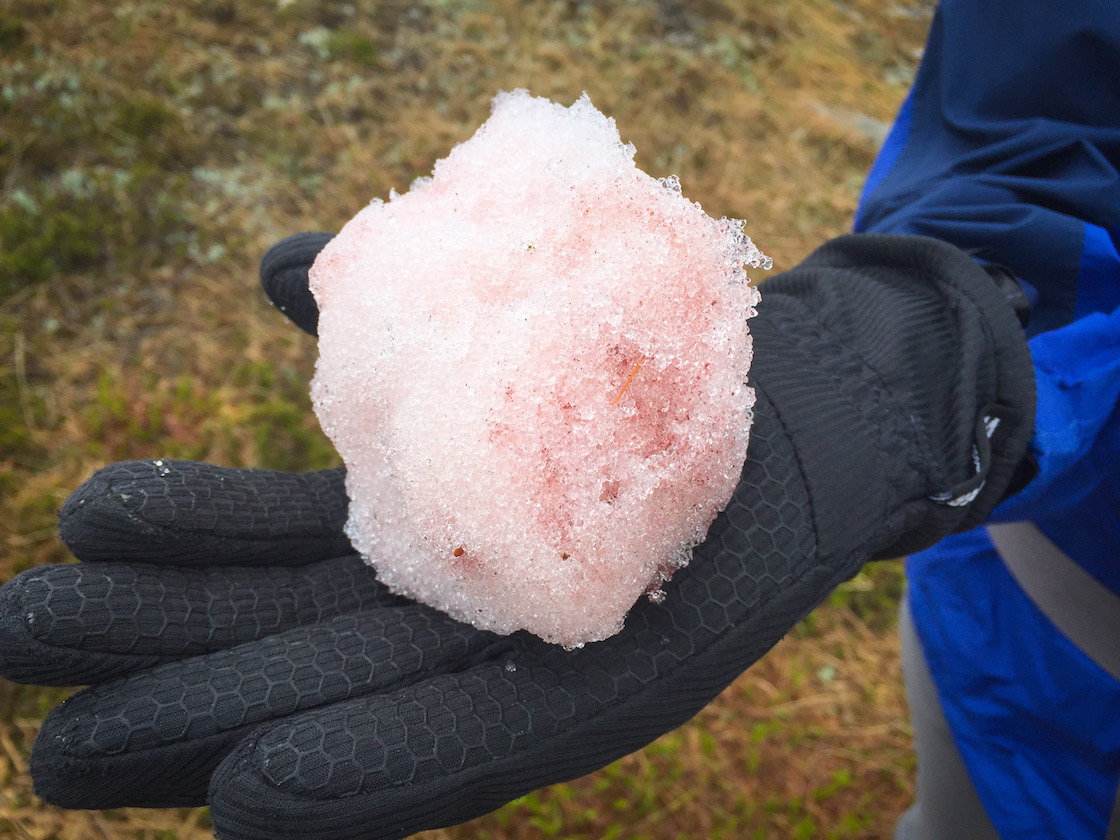 Perhaps it was fitting that was our first experience in the area. After all, that’s how the range got its name, after prospectors scaled the peaks in search of gold and left empty-handed, but not before christening the spires with the moniker which is defined as “something that causes fear, worry or irritation.” Undeterred by the weather, we continued hiking along a rough trail, eventually reaching Wallace Basin and summiting a spire nearly 2500 metres high. The clouded view may not have been what we were hoping for, but the feeling of accomplishment was great—even if we had taken a helicopter most of the way up. By the time we made our way back down to Walter Lake a few hours later we’d walked an impressive eight miles, meaning none of us felt guilty back at the lodge that evening while soaking in the hot tub with a cold beer, enjoying an uninterrupted view of the Bugaboo Spires. 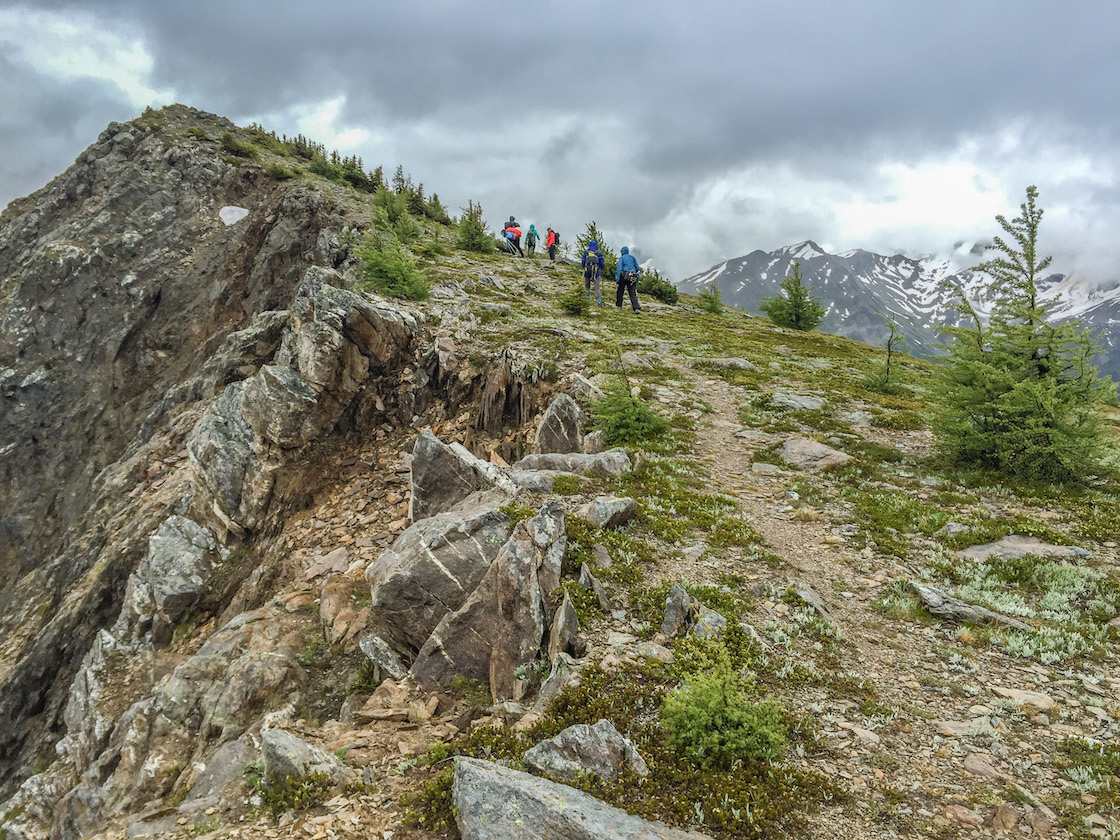 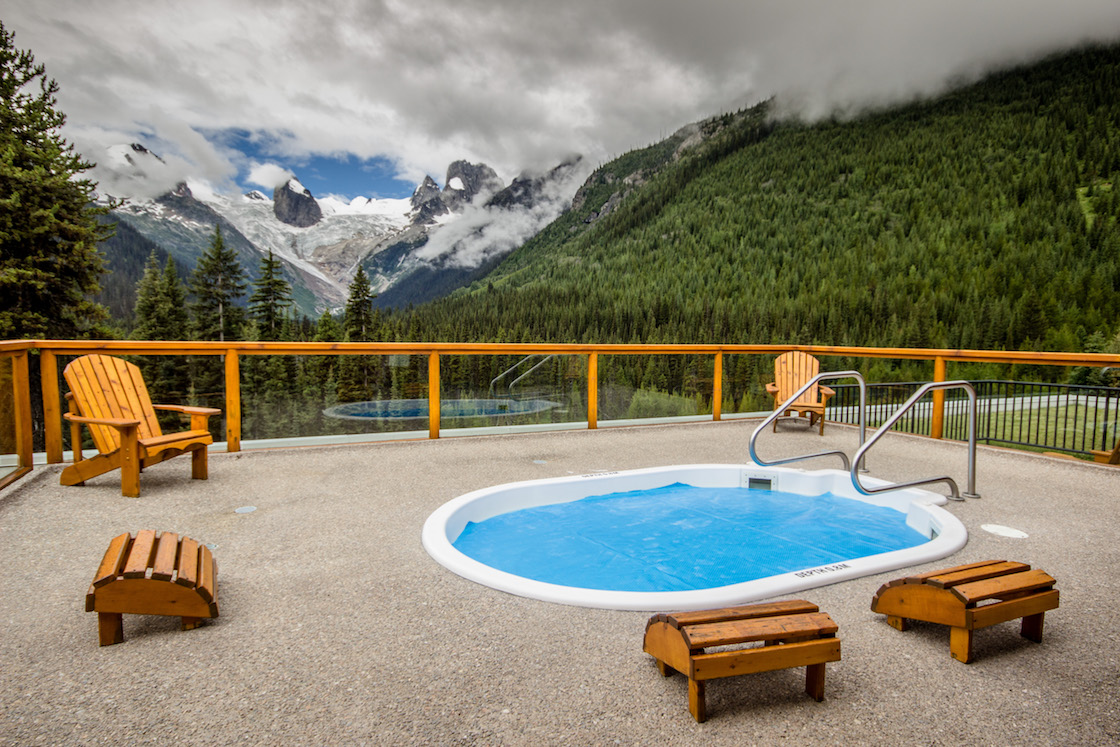 The outdoor hot tub at the Bugaboos lodge

Lady Luck was on our side for the last day of our heli-adventure. One group bravely tackled the Skyladder Via Ferrata, which saw them scale along metal rungs fixed to the mountainside with only a single rope supporting them while hanging thousands of feet in the air. Our group took a more conservative approach, and were dropped off on the west side of the Bugaboo spires to explore glaciers. After giving us a view of the Anniversary, Houndstooth, Pigeon and Snowpatch spires, the chopper touched down on what seemed like an impossibly small rock ledge before the so-called “Harley of the Skies” sped away to whisk off the third group. 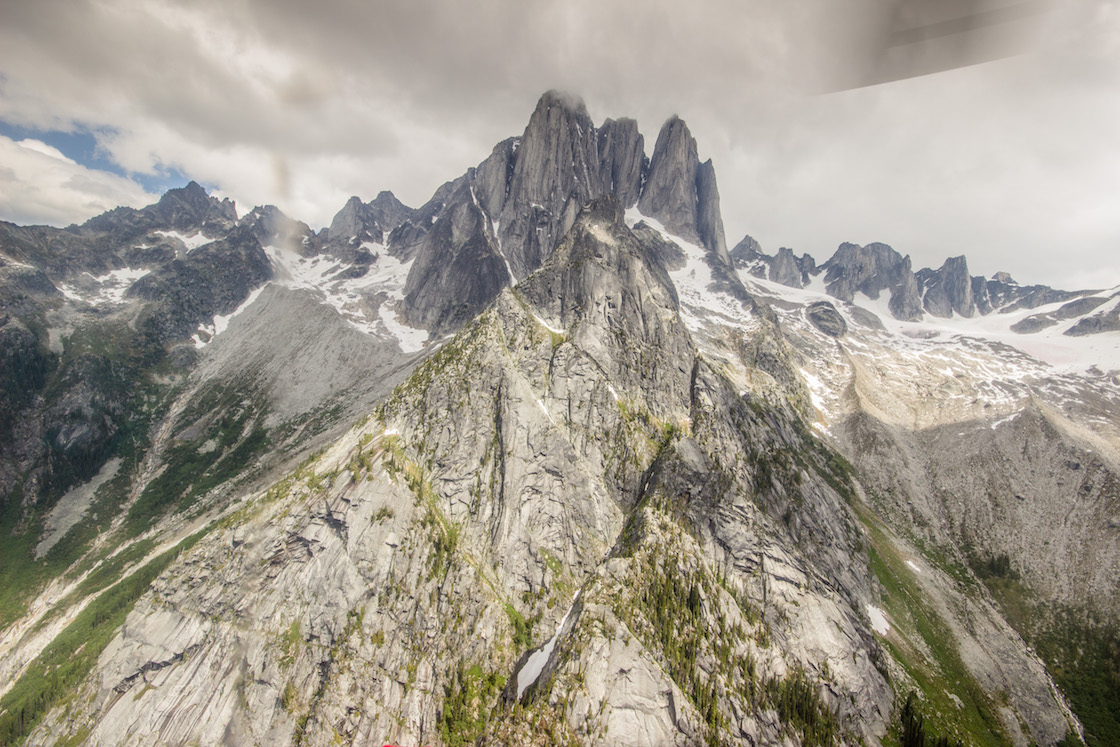 Once stillness had returned, we looked up to find the most incredible sight: a spire bursting out of the cliffside, surrounded by a steep mountain valley known as the Kickoff area. To say we were spellbound is an understatement, but it turned out our day was about to get even better. As guides led us through the wildflower-filled valley passing ponds and streams framed by the dark ridges, we found ourselves quickly shedding all the layers we’d worn as the sun began to finally make an appearance. Within minutes, we were treated to a spectacular scene of the vibrant blue sky and puffy white clouds behind the mountain range, the peaceful meadow sprawled before us without a soul in sight. 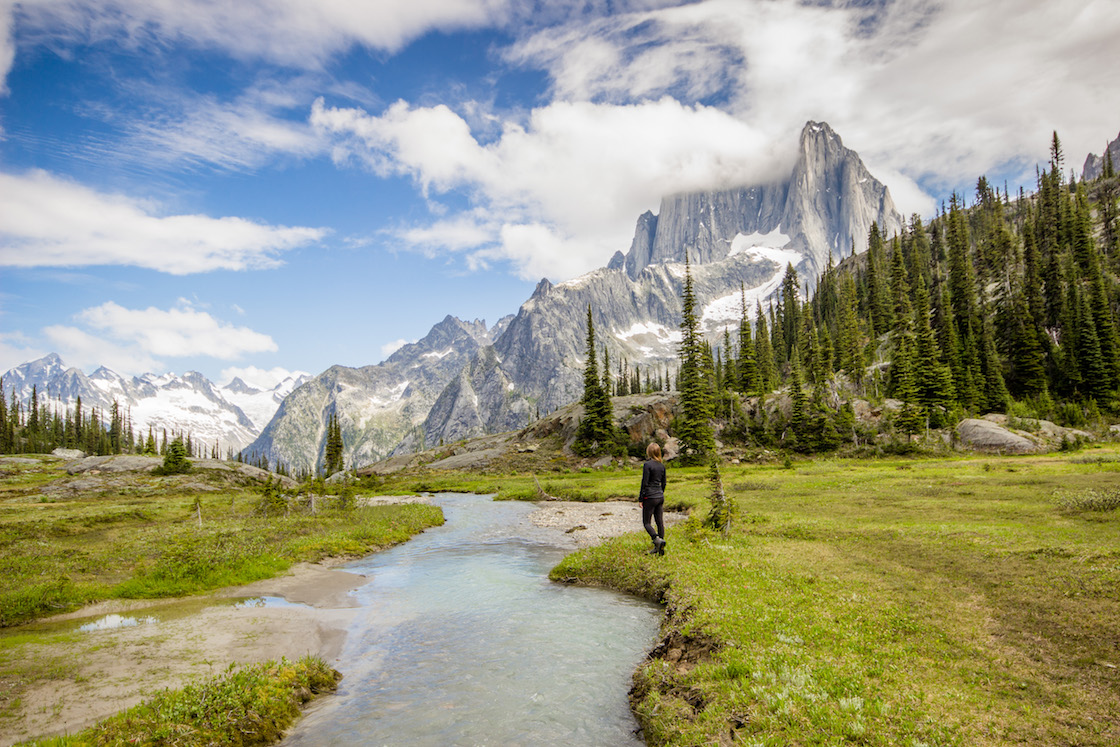 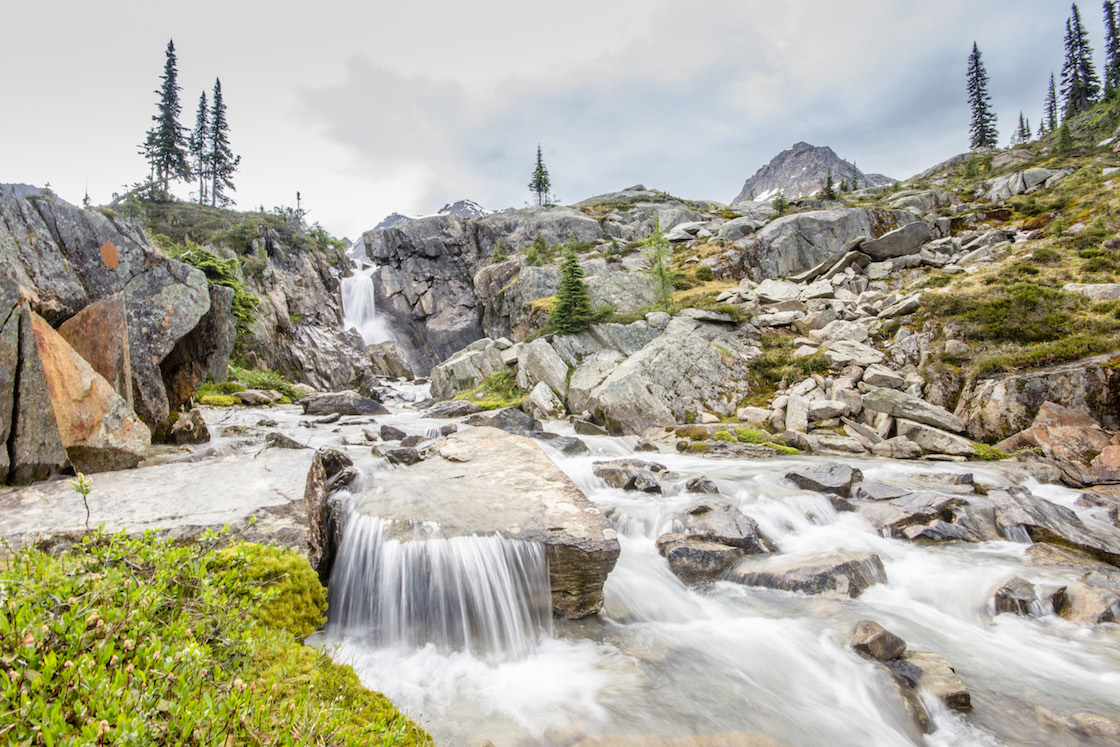 Navigating past waterfalls and scrambling over boulders, each turn in the trail brought exclamations of delight from our group as the views got better and better. We were unapologetically making slow time, too captivated by the scene to even think about turning away from it. Carefully watching our footing, we eventually we made it over a ridge covered in loose rocks to find ourselves in front of a spire reflecting off a tranquil emerald pond. It was the perfect place to nestle ourselves between the rocks, and tuck in to our picnic lunches. 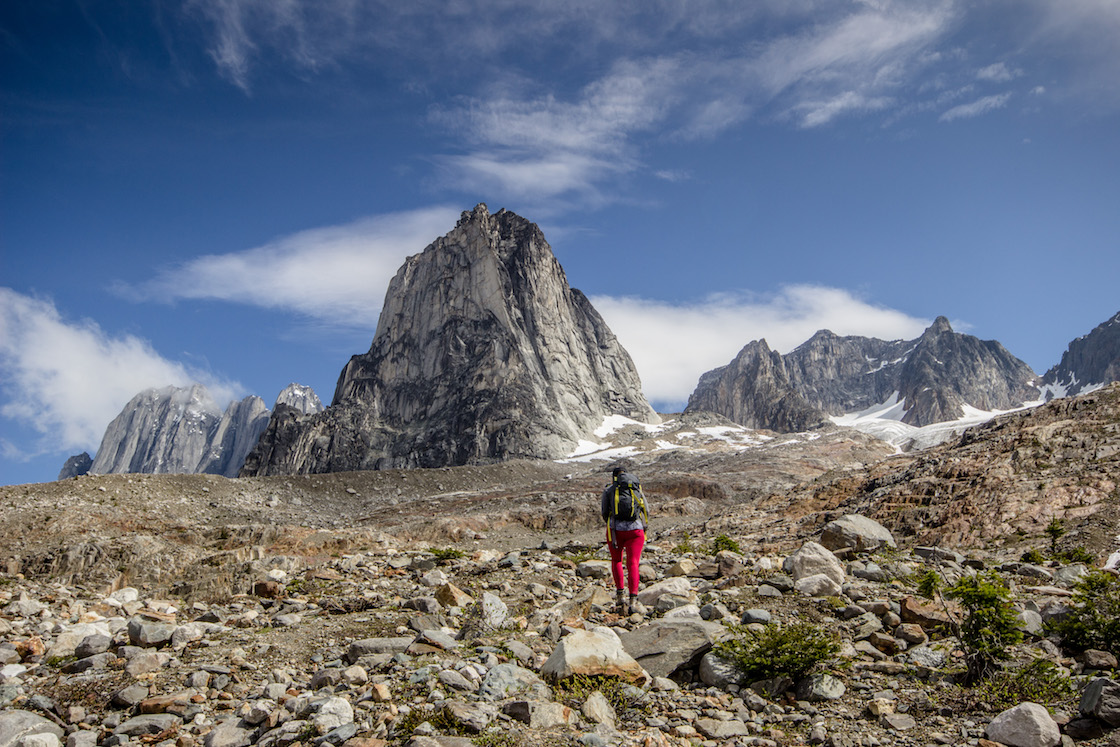 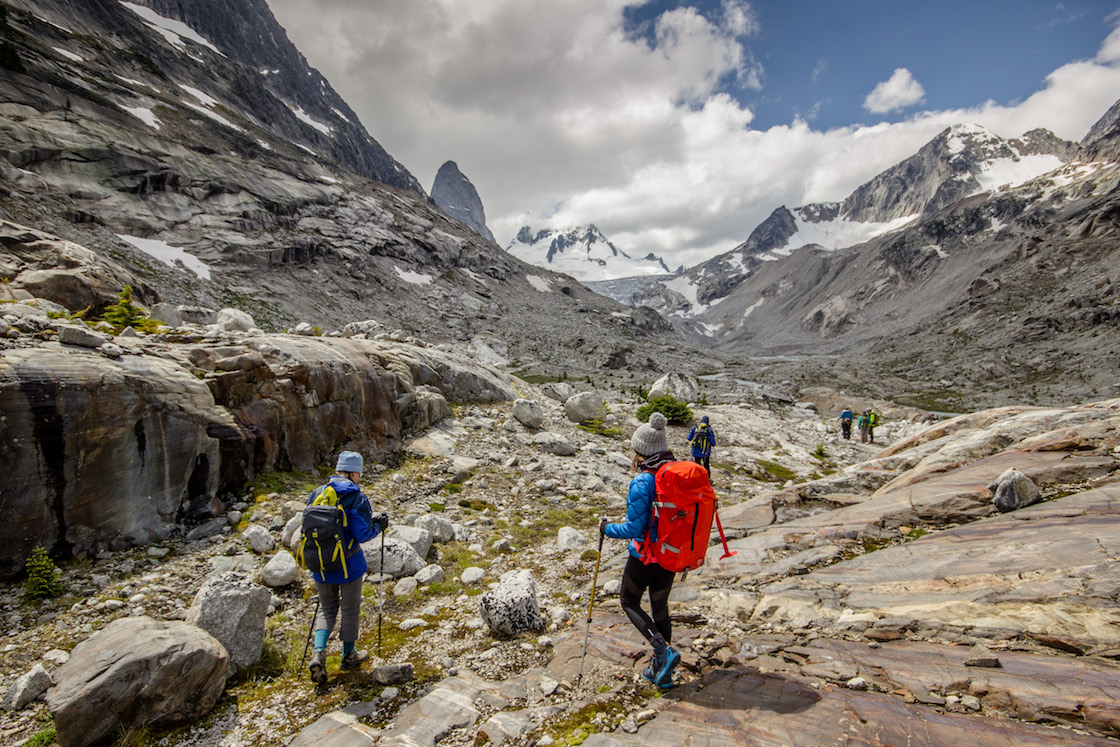 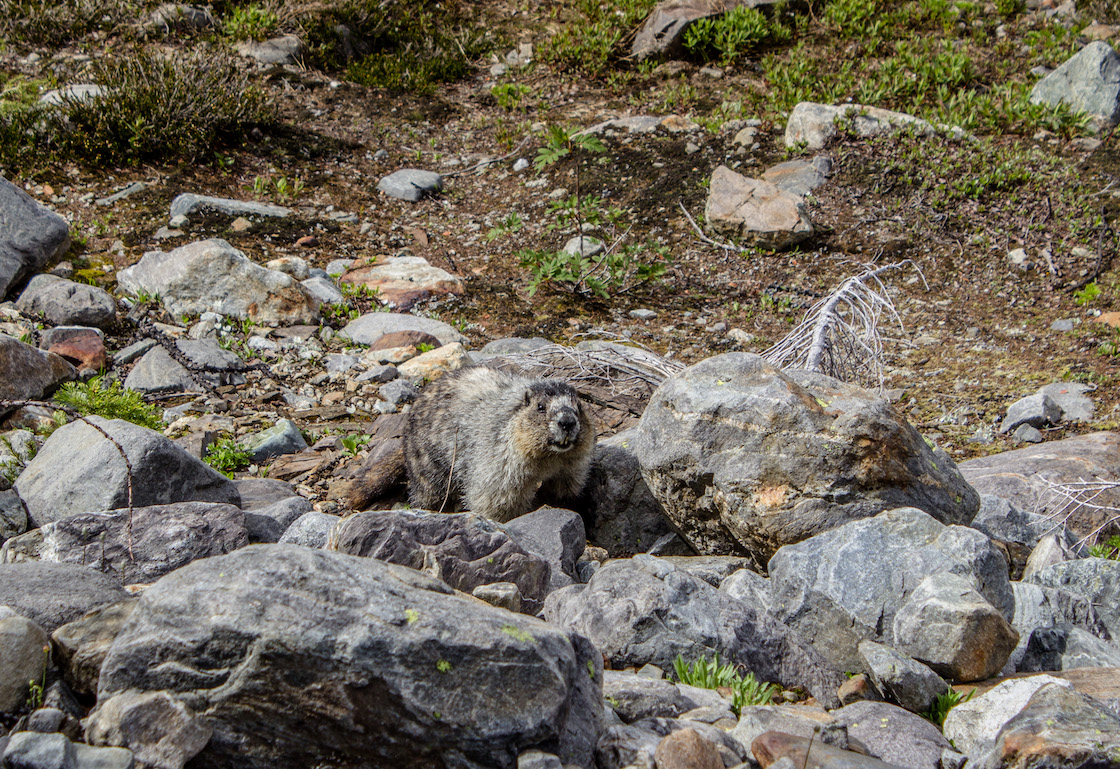 A friendly marmot makes an appearance

Once our bellies were full and our legs had gotten a well-deserved reprieve, Ryan radioed the helicopter to take us to the next stop. As this was a multi-drop day, we were heading to another treasure in the Bugaboos: the Vowell Glacier. We soared through the granite peaks, passing over pools of glacier-fed water and pink snow before the icy surface of the glacial moraine came into view. The chopper dropped us on a sandstone rock face, leaving us to wander along an aqua-marine hued stream filled with floating icebergs. We took note of the steep cliffside that has seen its fair share of rock slides—a phenomenon not lost on us as we heard the crash of boulders tumbling down onto one another in the distance. 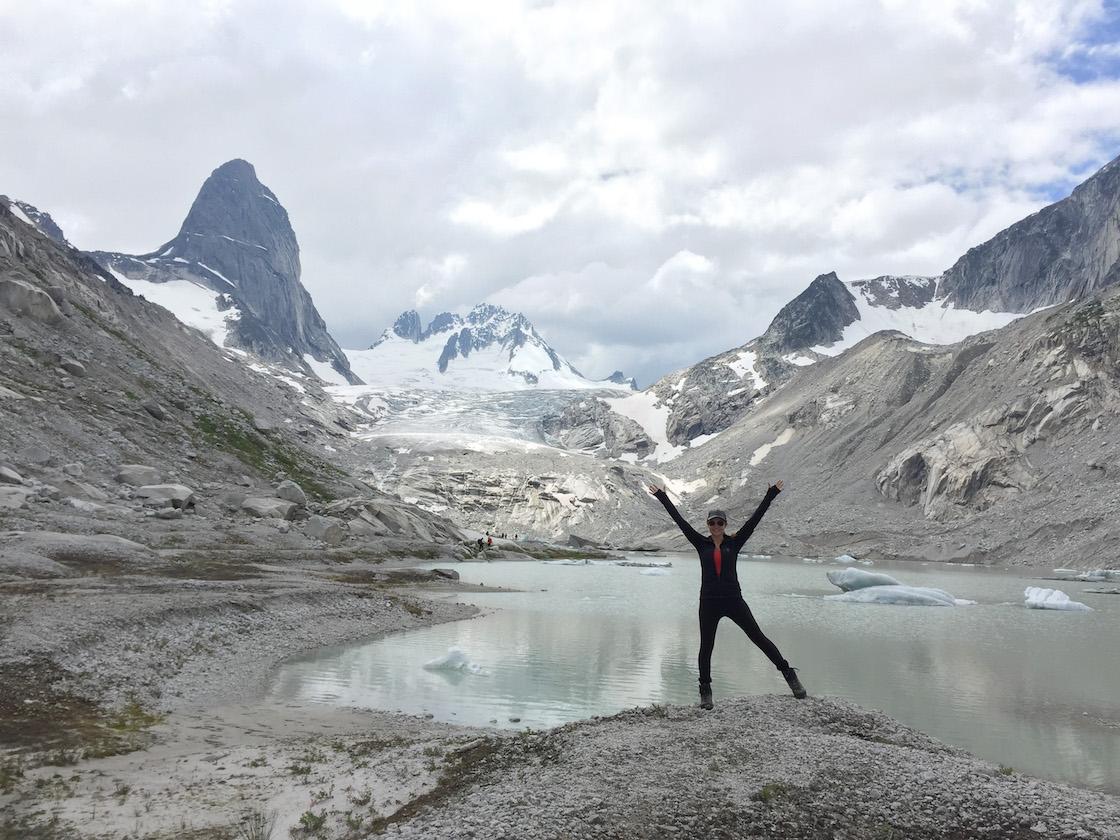 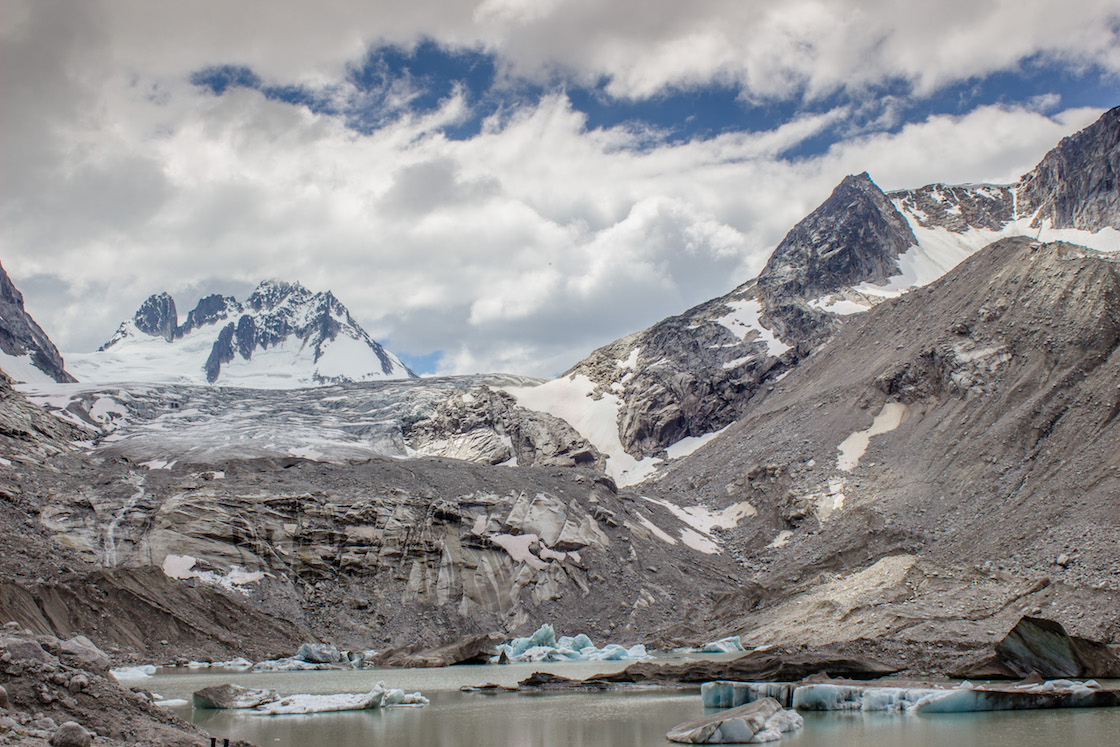 Due to that threat we weren’t able to actually walk on the glacier, but we were more than close enough to stare at it in awe as the Bugaboo Spire rose up behind it. Our guide Jeff also pointed out a few signs we’d passed earlier on the trail, marked with “2000” and “2002.” It turns out they serve as markers to show how much the glacier has melted in just over a decade—a sobering reminder that someday, these incredibly beautiful places may no longer exist. 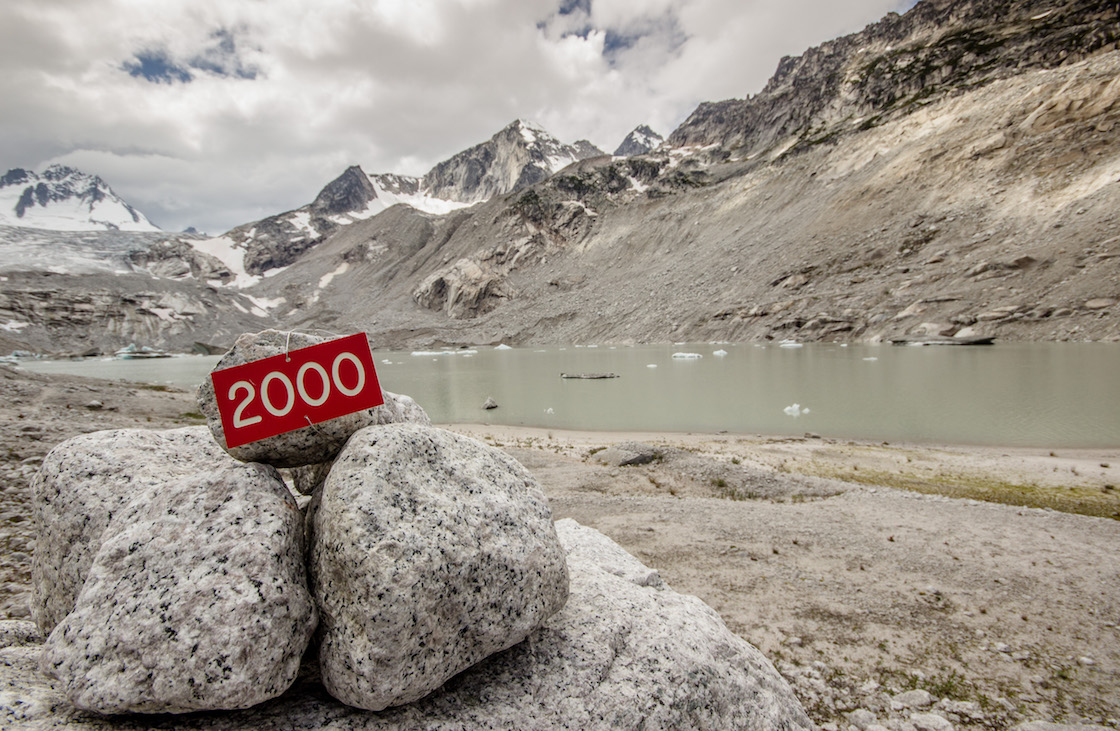 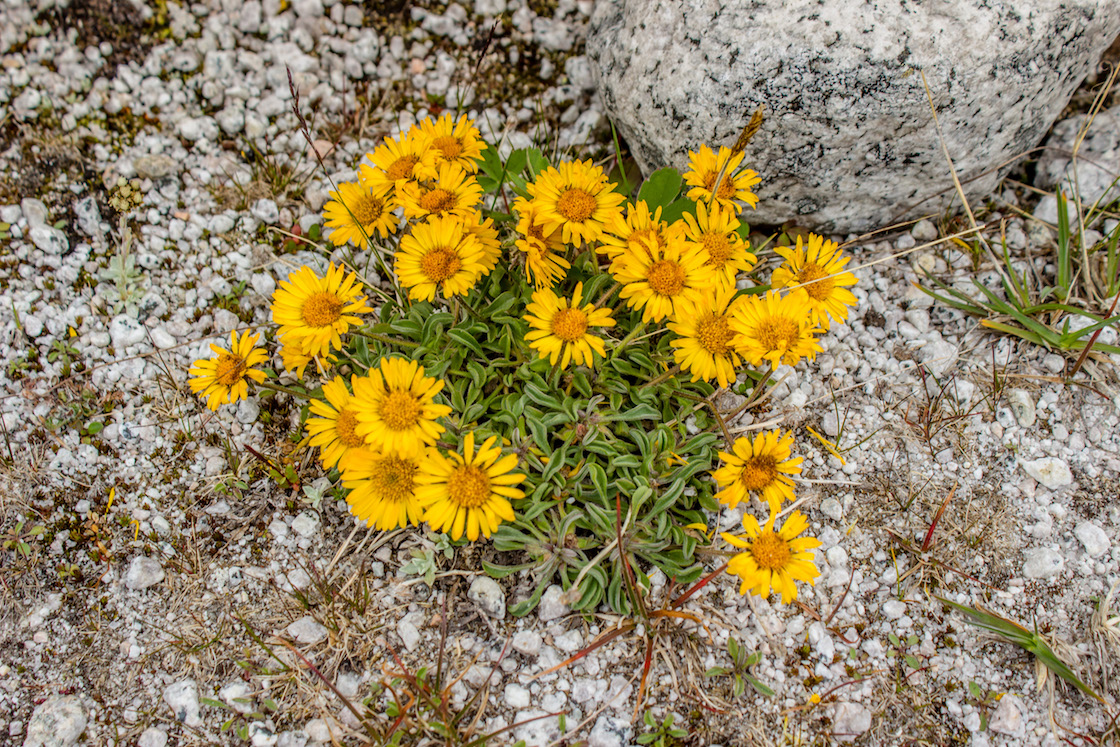 Despite the dark clouds beginning to approach, our last stop had us returning to the same area we’d explored on the first day, in hopes we could beat the storm and enjoy the stellar views. Standing at the top of a grassy ridge half-covered in pink snow, we crested the range to discover famous Cobalt Lake perched perfectly before us. The surrounding mountains created a bowl for the ink-coloured pool, as waterfalls gushed out of it and down the hillside. It was easy to see why Cobalt Lake is a favourite spot for photographers, particularly during wildflower season. 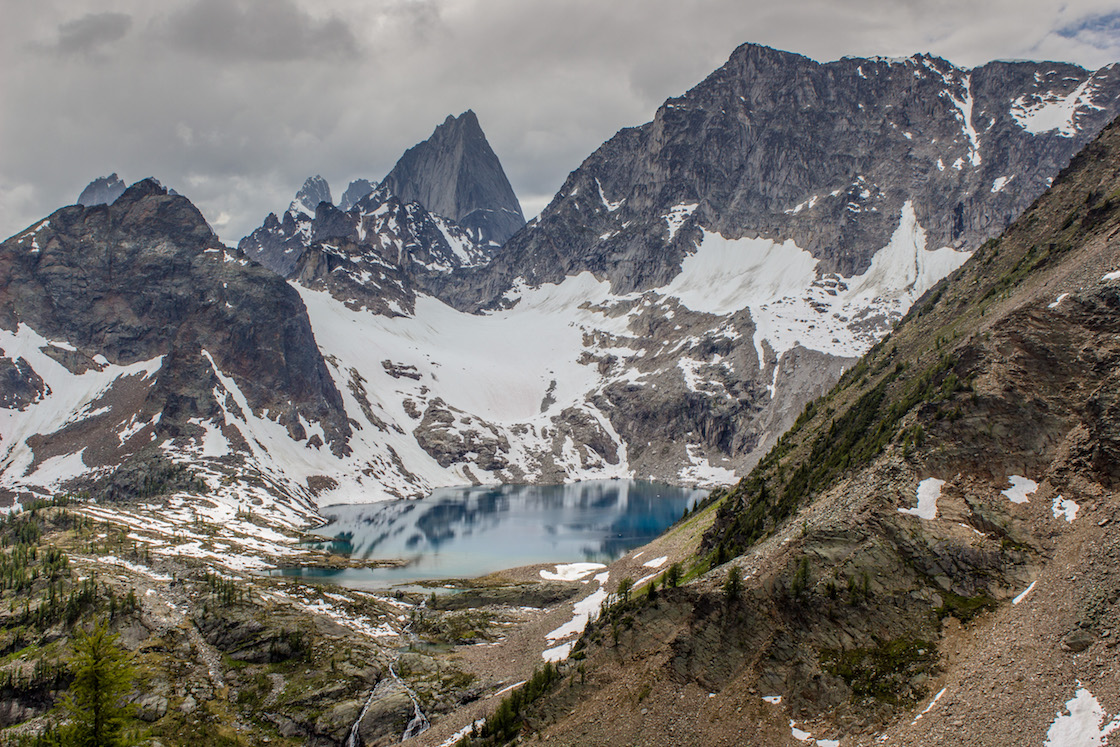 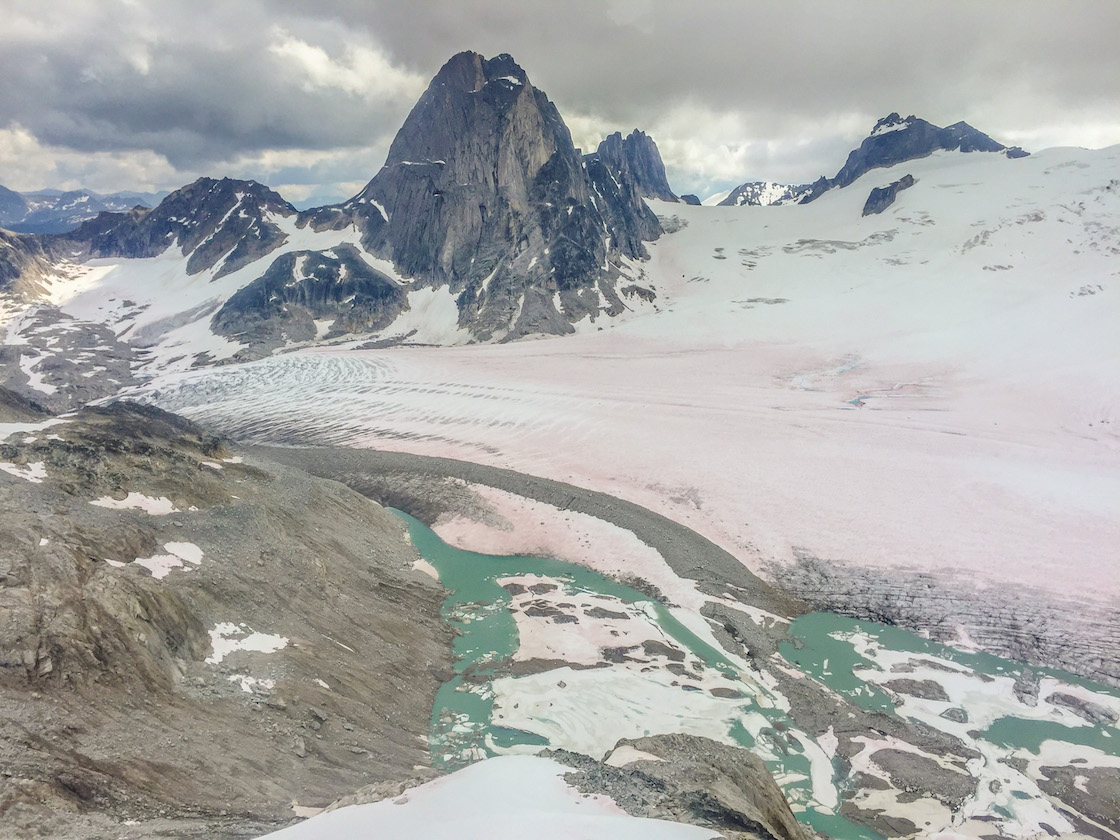 We headed back to the very tip of the ridge, putting our legs to the test as we scaled a narrow pathway only a few metres across, hyper-aware of the steep drop on each side. Just as we neared the summit in hopes of that memorable view the storm rolled in, pelting us with rain and hail as we climbed to heights of nearly three-thousand metres. The view of the entire mountain range sprawled beneath us was just within our reach, but we’d have to wait another day to see it.

Once again we’d been Bugaboo-ed—and none of us would have had it any other way. 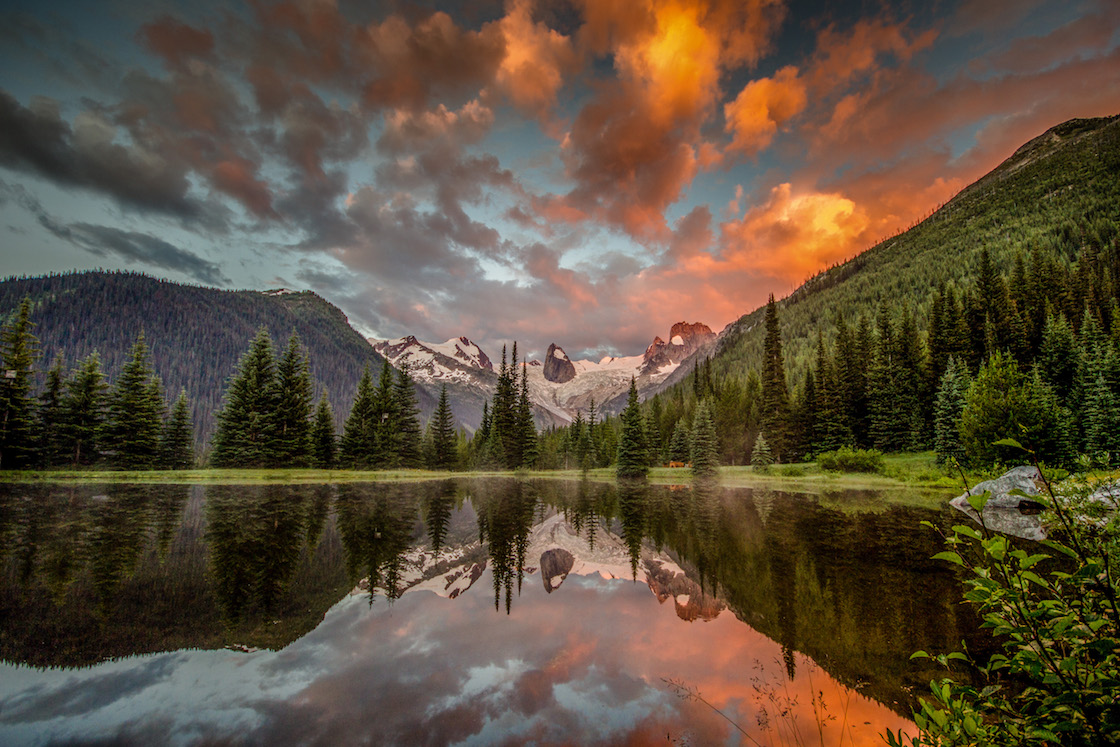 Sunrise in the Bugaboos

Globe Guide explored the Bugaboos as a guest of CMH. As always, hosts have no editorial influence on articles.

Kootenays calling: The best spots to explore from Nelson to Kaslo

How to enjoy a luxury getaway in Whistler, British Columbia 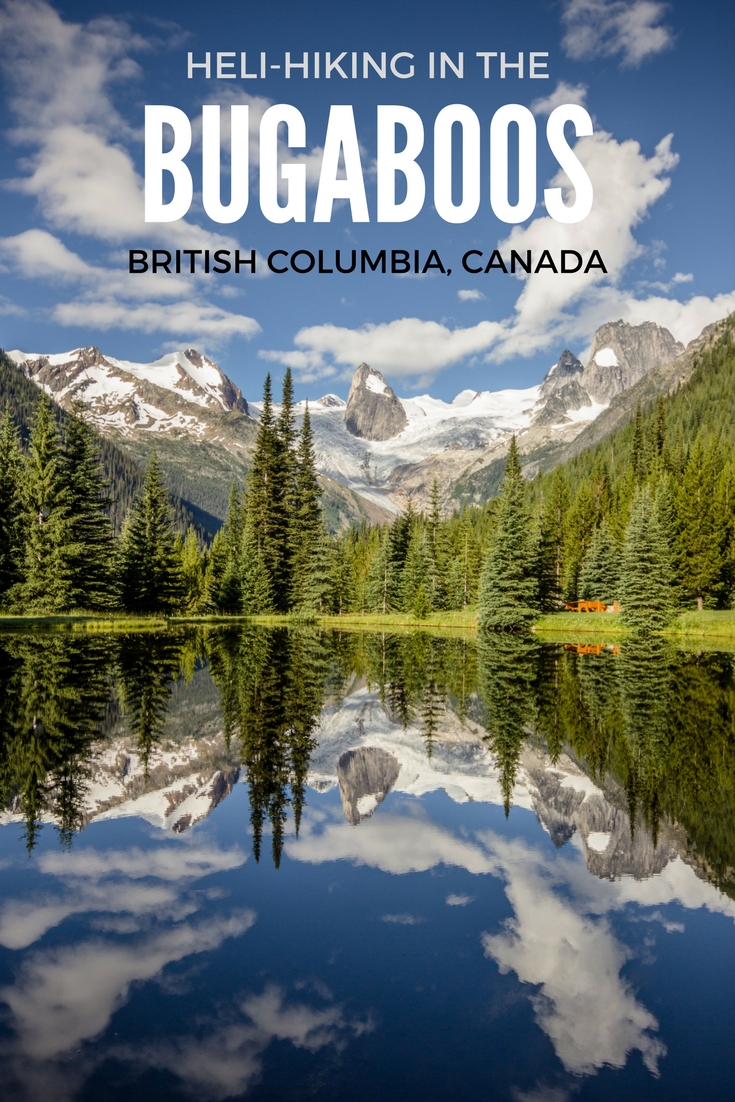