My skis sliced through the snow as effortlessly as a knife cuts through butter. The pillowy soft powder I’d disturbed swirled up behind me, catching the sun rays and creating a cloud of sparkles that tracked my trail down the mountain. The only sound over my laboured breathing was the snow crunching underfoot as I carved rainbow patterns into the hill, and the occasional whoop of delight echoing in the distance as another skier tore down the untouched slope. There was no denying it: heli-skiing was absolutely magical. 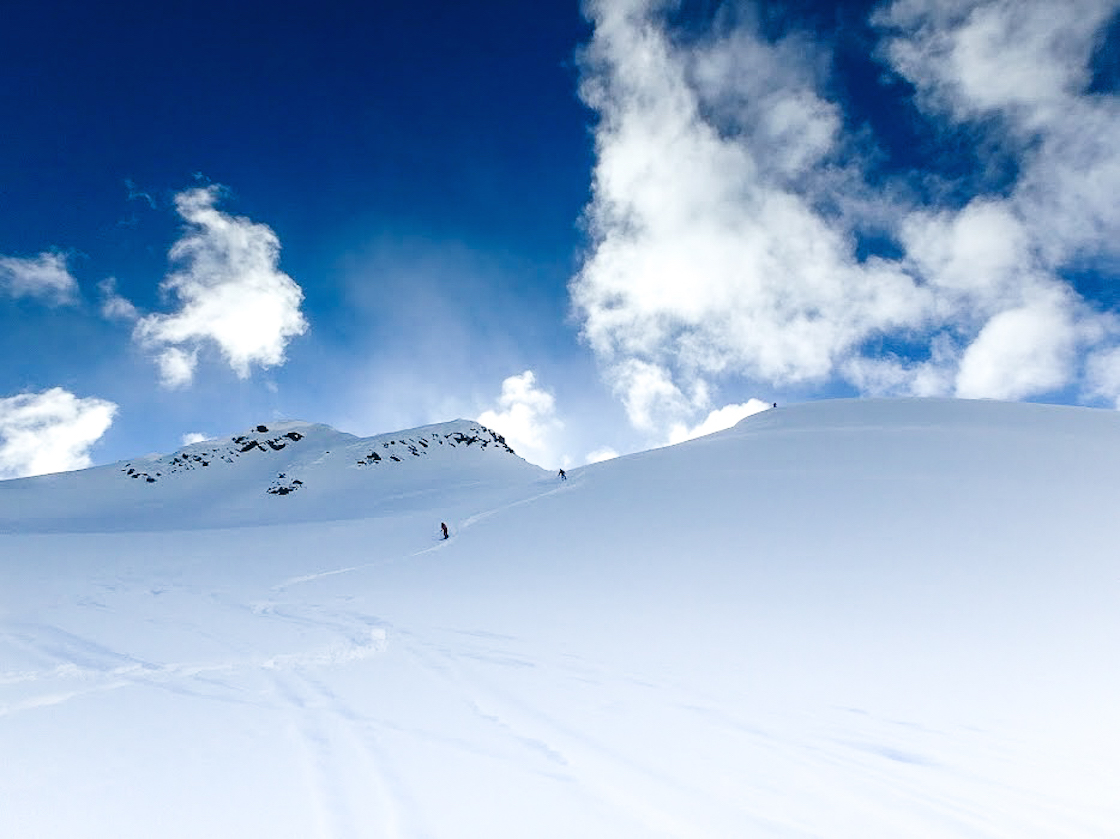 The setting for this bucket list-worthy adventure was the towering Purcell Mountains in British Columbia, Canada. The range is one of the best places in the world for such excursions, as it’s the birthplace of heli-skiing, has some of the highest elevations and can see chest-deep snow drifts. There are a handful of operators in the area including RK Heliski, which has been expertly guiding tours from their base in Panorama for half a century, building up a loyal clientele from as far as Australia, Japan, Germany and Switzerland over the years. 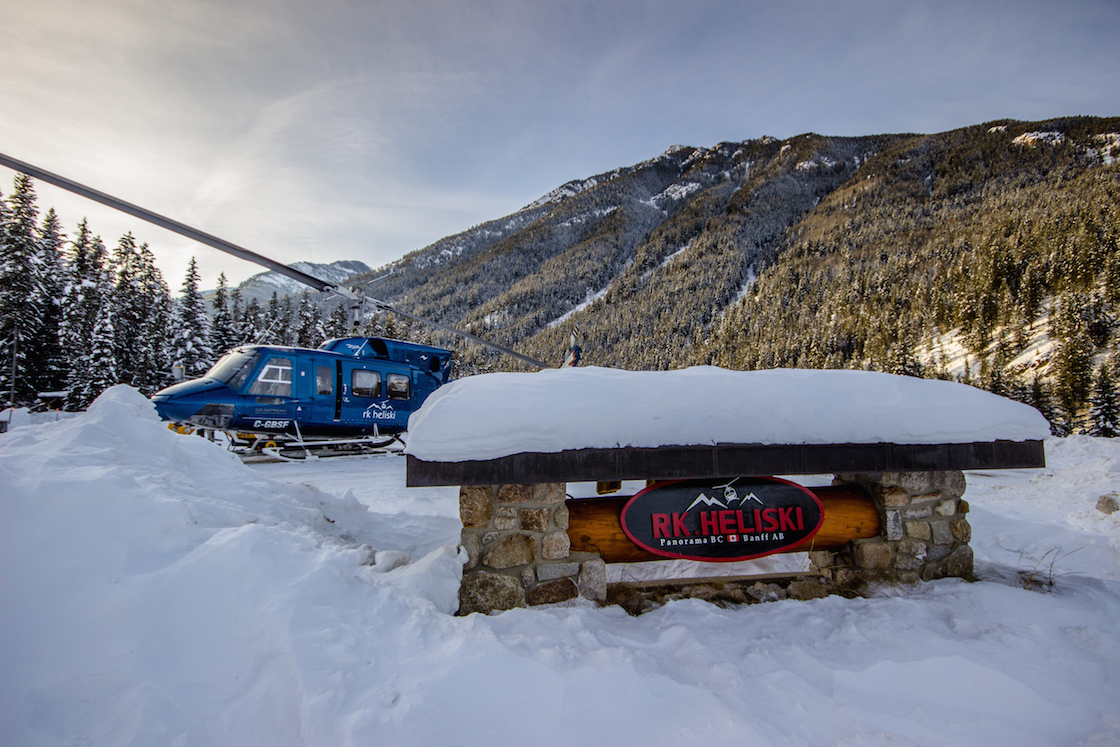 Earlier that morning, our group had arrived at the heli plex and tucked into a hearty breakfast while general manager and seasoned ski guide Graham Holt shared some insight into what we’d be experiencing that day, along with helpful tips about what to bring along and wear (hint: not as many layers as you might think). Before we knew it, we were bundling up to head outside for an excellent lesson on avalanche safety, which included learning how to use our beacons and transceivers in the unlikely event of a slide.

We were then split into two groups of eight, with one crew hopping into the Bell 212 helicopter to soar off towards the Guardsmen Group of the Purcells, while our group hopped in a van to meet the chopper at a different location. Our excitement built as we stood with our feet anchored firmly in the snow drifts surrounding the landing pad, as the whirring noise made by the helicopter’s blades got closer and closer. It touched down a few feet in front of us, causing the snow to swirl up and around us like a cyclone of snowflakes. We piled into the bird, and just seconds later we were airborne, heading straight for the towering glacial peaks. 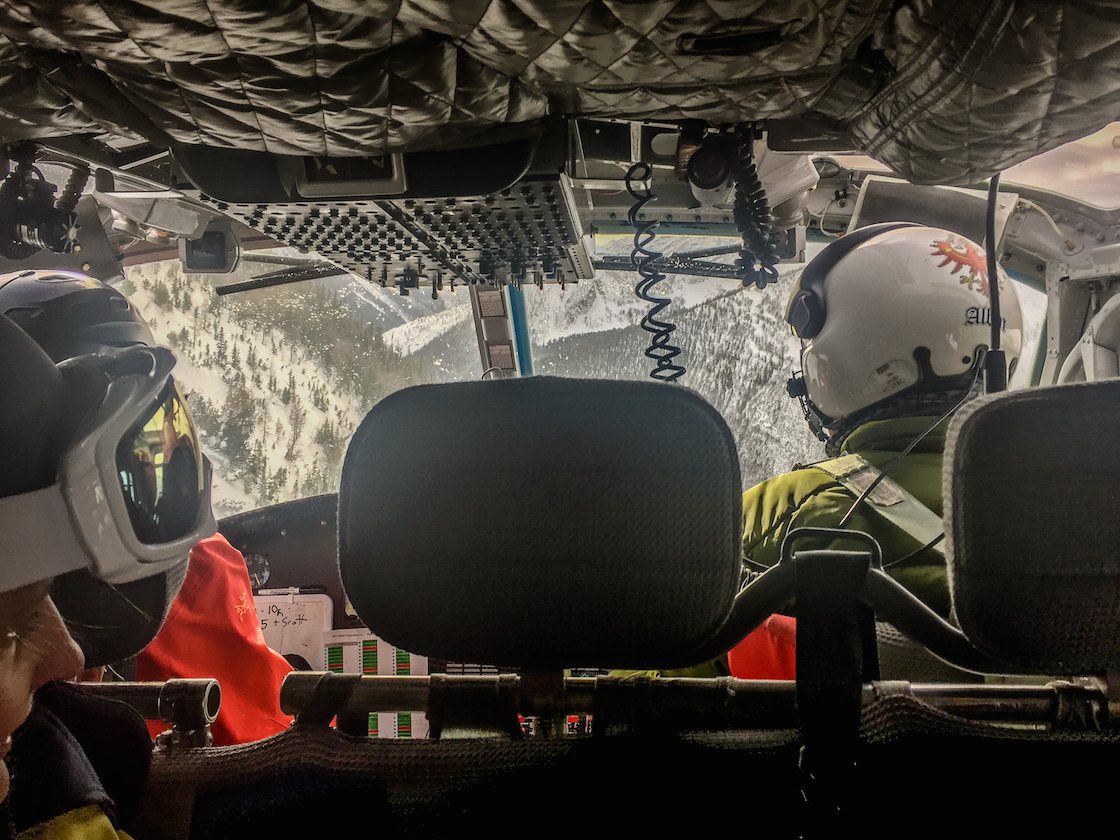 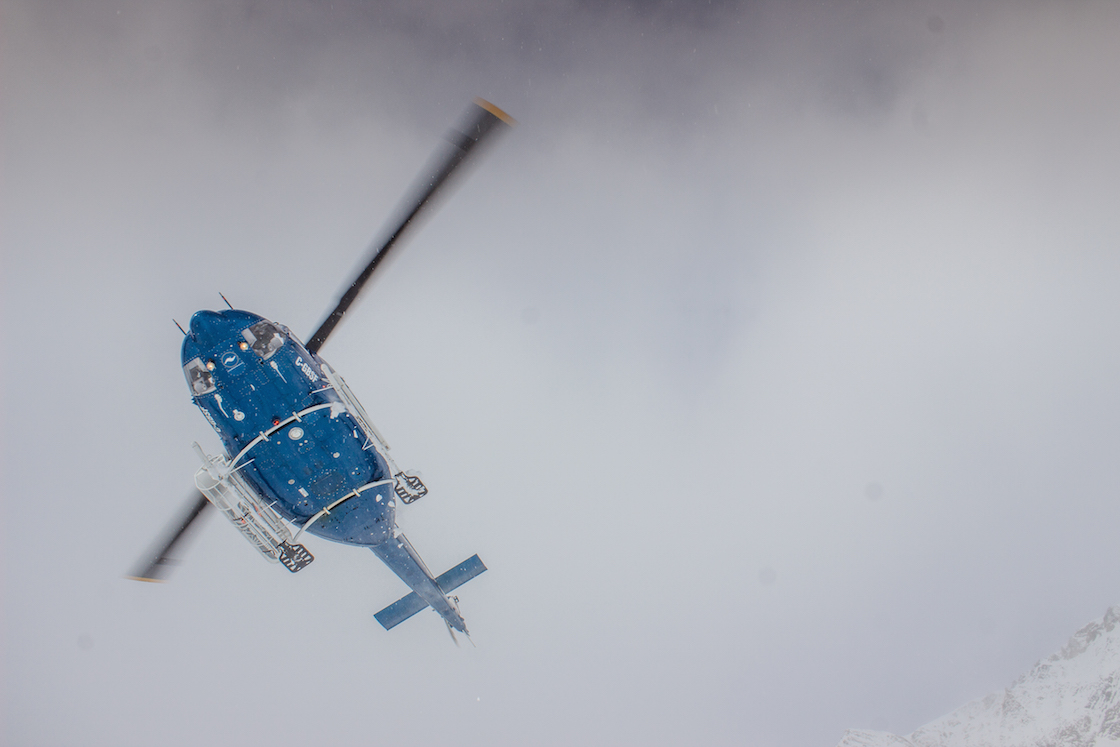 It didn’t take long for us to touch down on the south side of the Jumbo glacier, and we huddled together to shield our faces from the blowing snow as the helicopter sped away. It disappeared over the ice-capped horizon leaving us alone with the mountain, none of us uttering a word as we quietly took in the awe-inspiring scene. The untouched terrain was all ours. 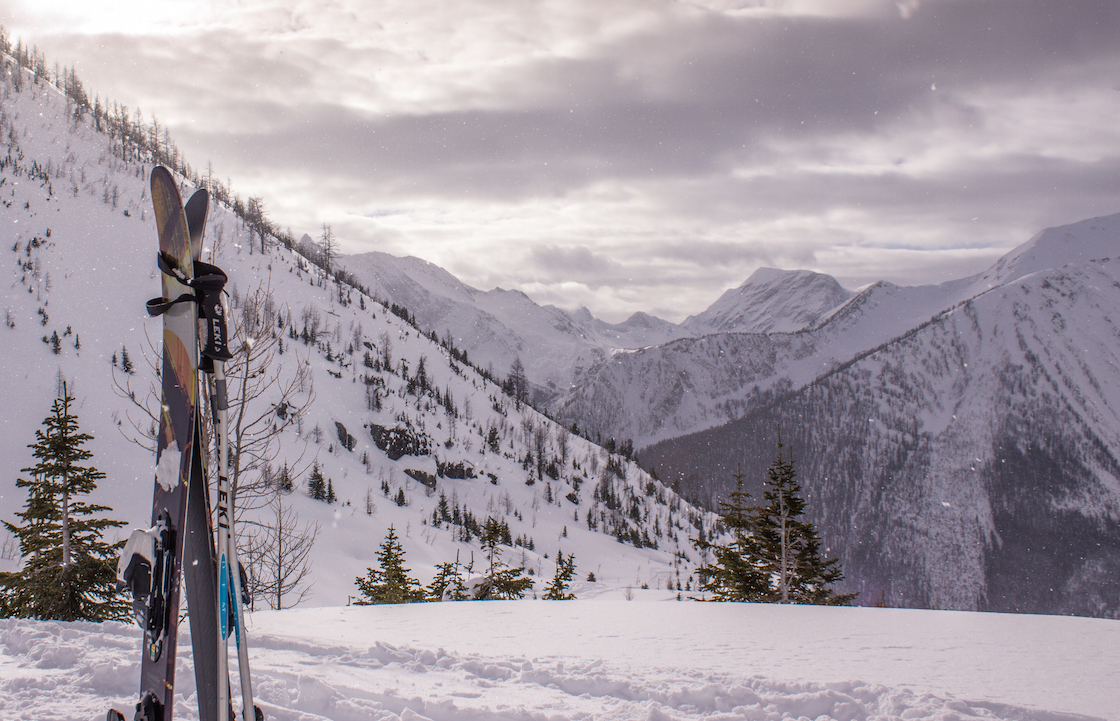 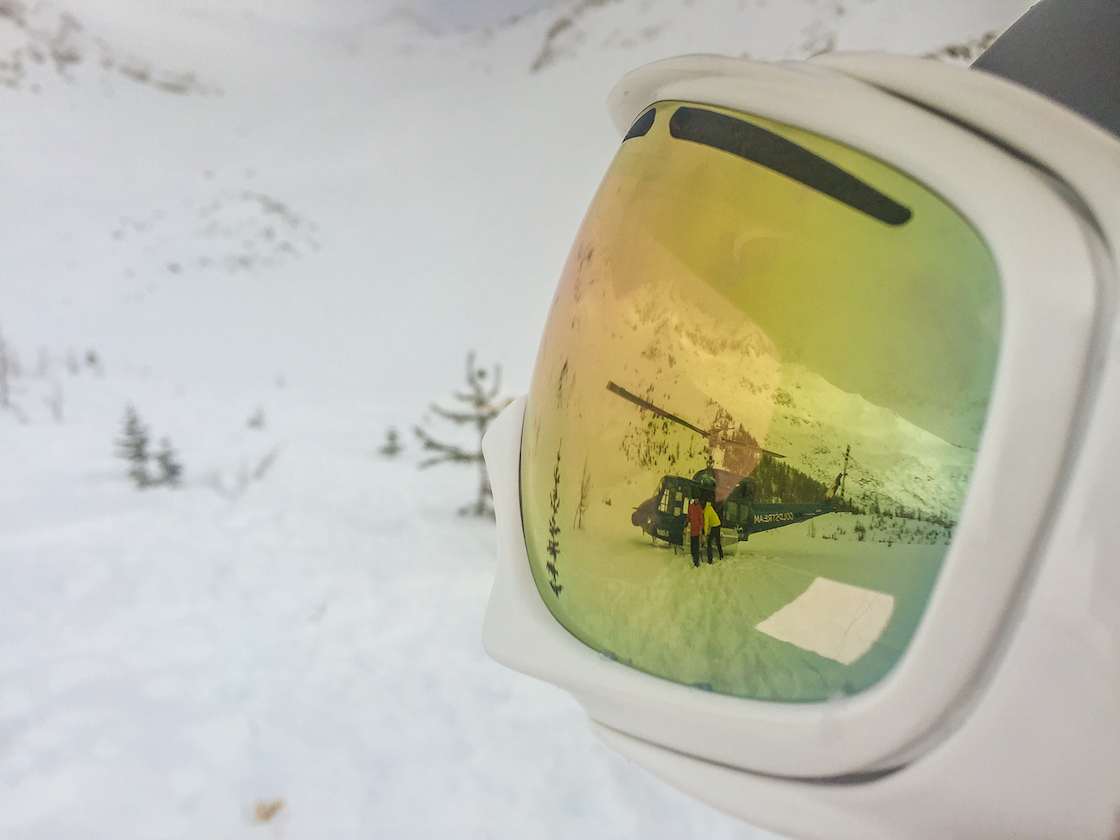 Graham was the first to break the silence, instructing us to grab our equipment out of the bundle of skis, snowboards, poles and backpacks the second guide Scott had unloaded from the chopper. As we settled into our bindings, he explained that gliding through deep powder is a much different experience than navigating a groomed ski hill, and as such it was important to “keep the booty up!” and stop for breaks when we needed them. It’s safe to say that at that moment, none of us realized what a workout we were in for. 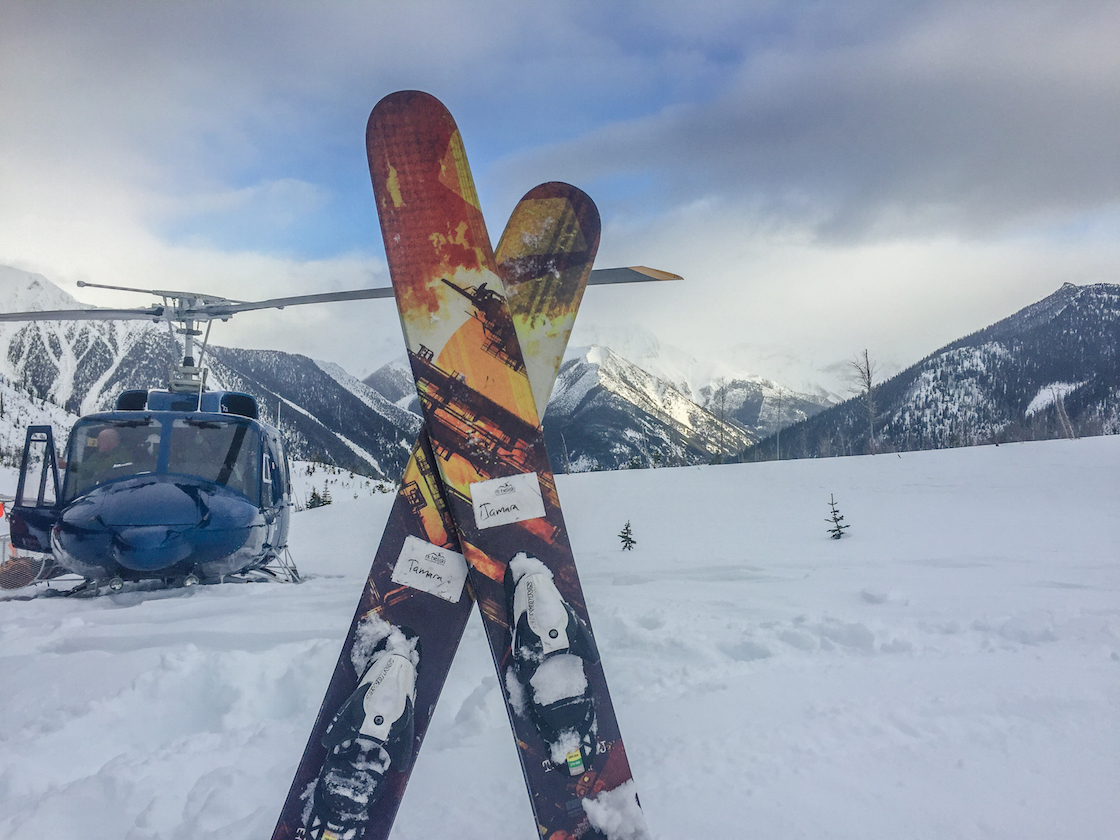 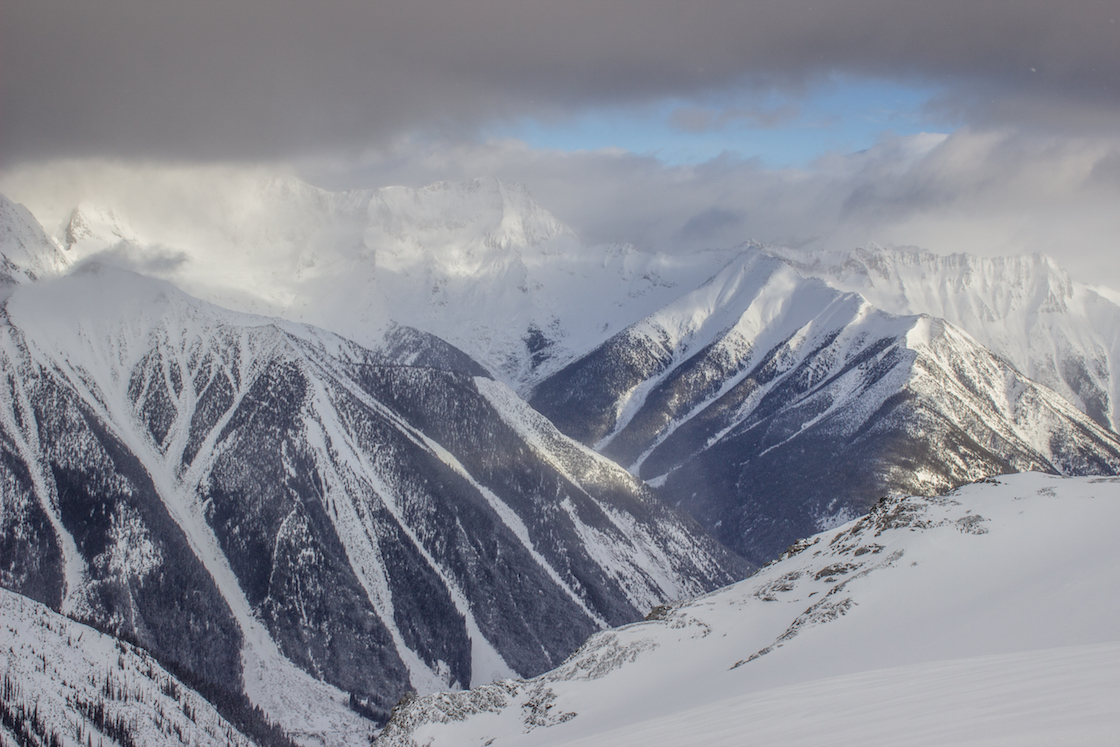 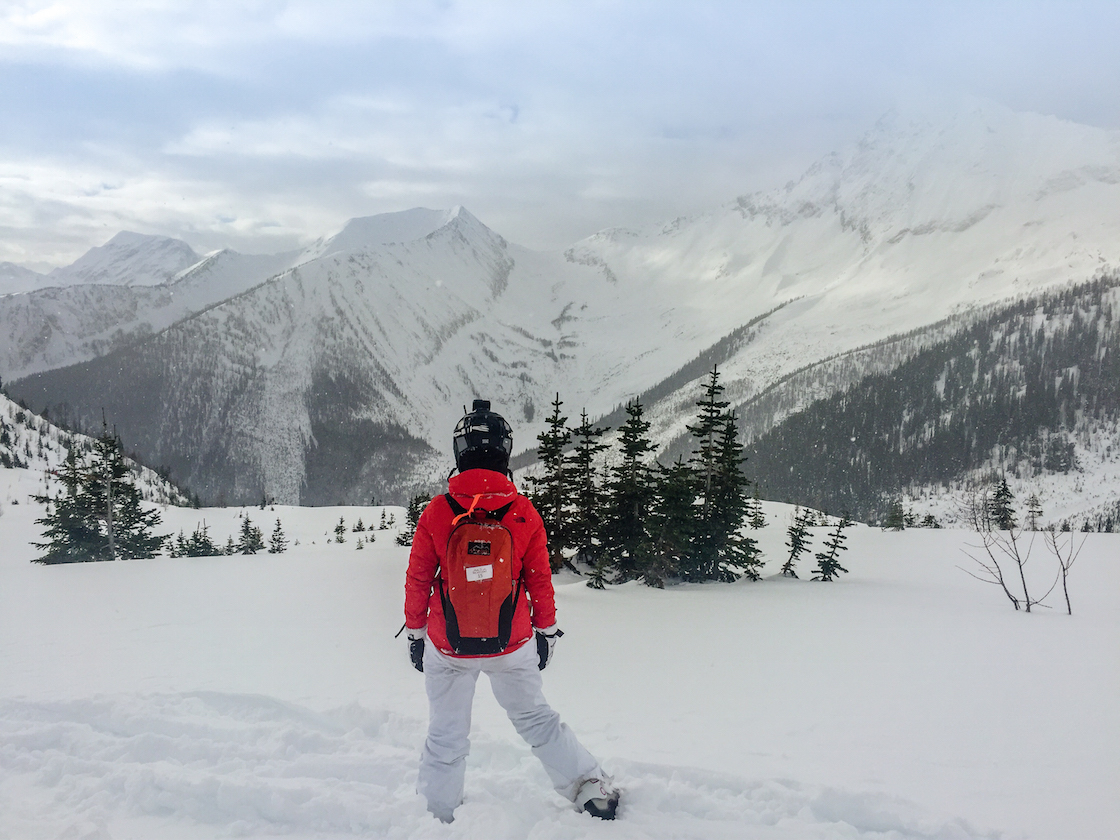 That first run was glorious. Graham expertly swished through the virgin powder, the trail behind him marked by perfect half circles for us to mimic. Though there were nearly a dozen of us speeding down the slope, I felt like I had the mountain to myself. The landscape was so spectacular that it was all I could do to tear myself away from the sight, cognizant that I also needed to keep an eye on the terrain in the event a rogue boulder decided to make a sudden appearance. Occasionally I would stop to catch my breath, and take the opportunity to thank my lucky stars that I was getting to enjoy such an incredible experience. 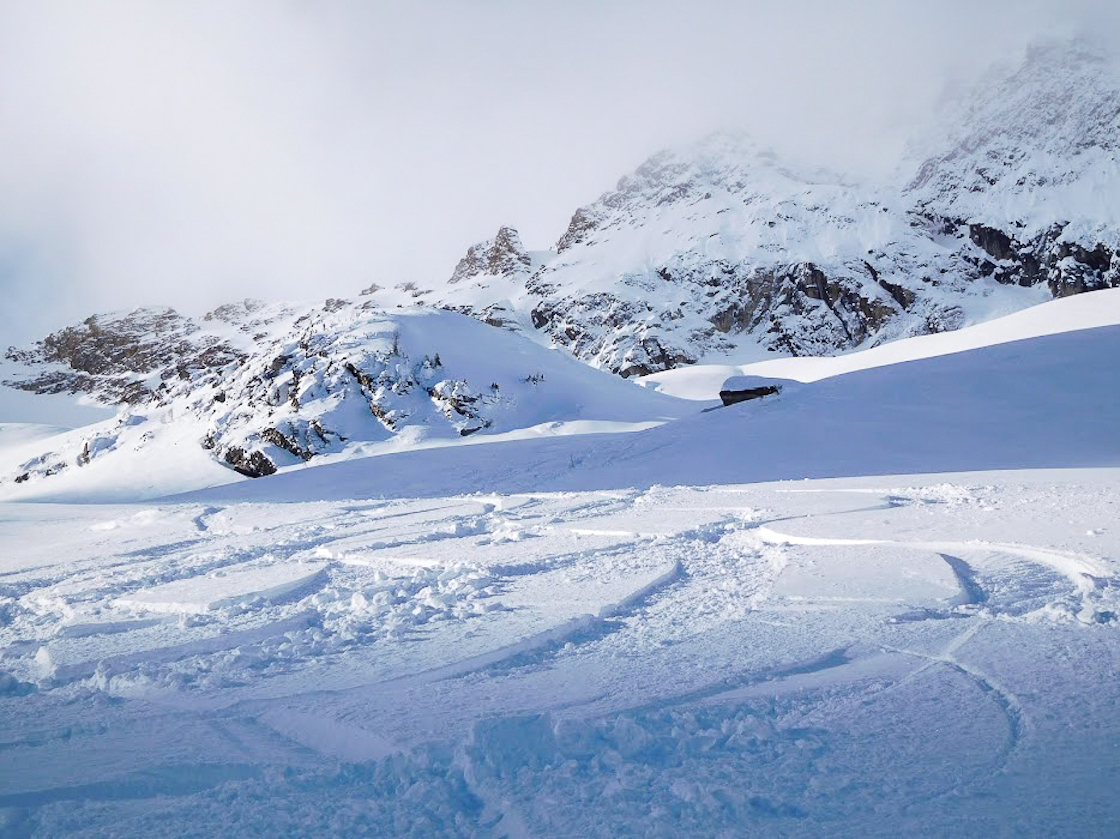 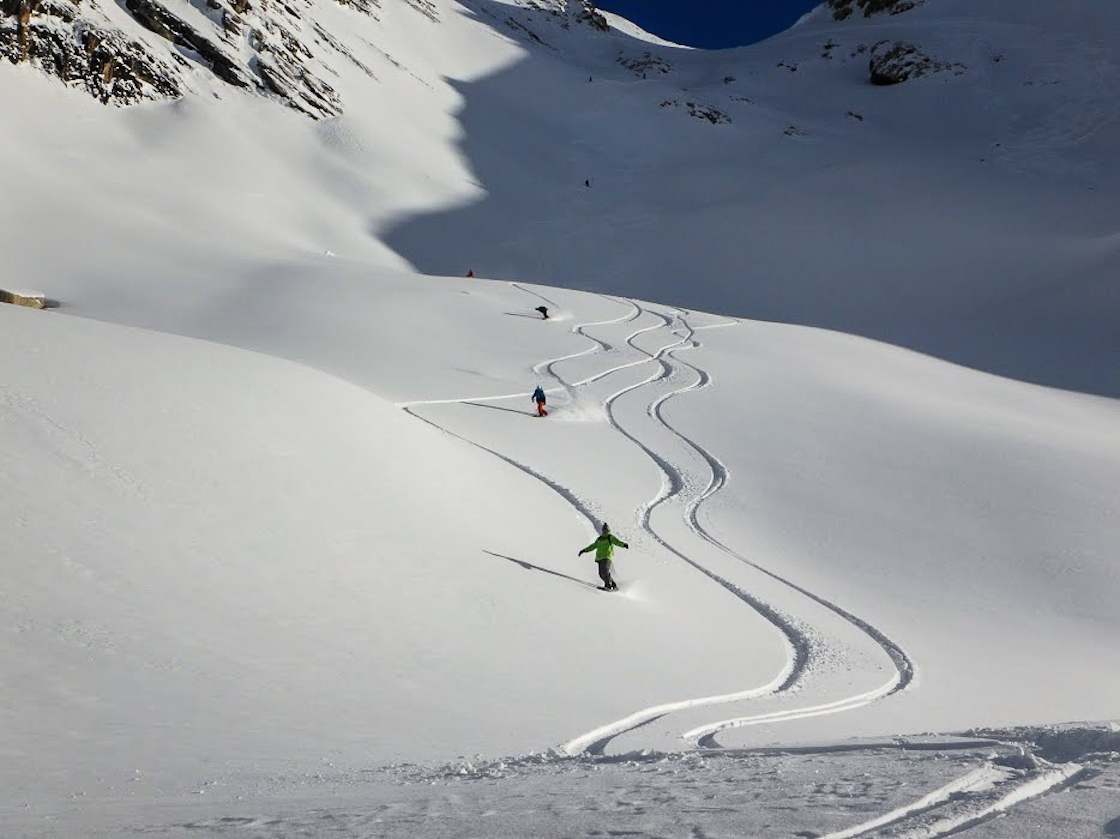 The rest of the day followed a similar pattern: ski from an elevation of nearly 3000 metres, hop into the helicopter waiting at the bottom, be whisked off to a different run such as Millennium or Sundae Cirque, snap on our skis, then do it all over again. We managed to get in four full runs, and despite my quads screaming at me from exertion I didn’t want to stop.

Hours later, our alpine adventure wrapped up with a hearty lunch right on the mountain, which I devoured while flopped into the side of a snowbank, exhaustion finally setting in. When it was time to get back into the helicopter for our final flight back to the base, I took a wistful last look back at the craggy mountain peaks, curved bowls and bluebird sky, as a large grin spread across my face. I’d conquered my first day of heli-skiing—and couldn’t wait to do it again. 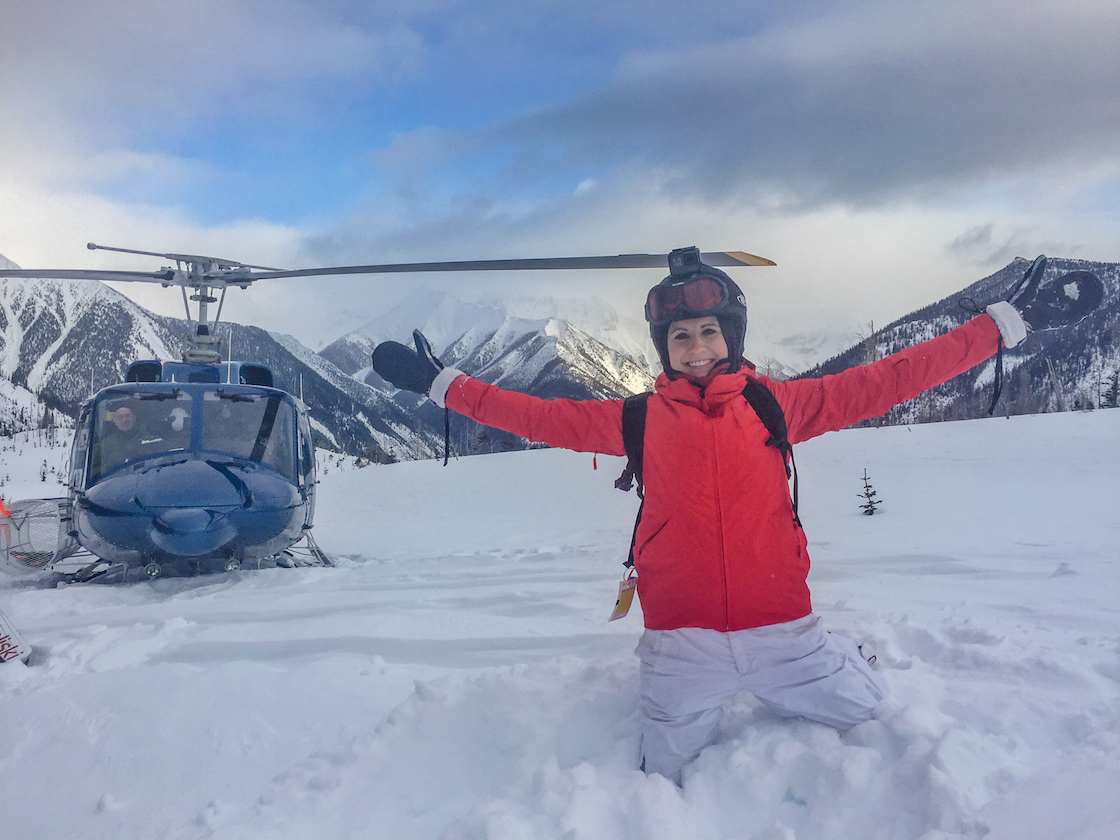 When to go: The heli-skiing season runs from December through April

Cost: A day of heli-skiing costs about $850 per person for three runs, and includes equipment rentals, snacks and lunch. Each additional runs costs about $100.

Getting there: The RK Heliski base is just a couple minute’s drive from Panorama Mountain Resort. They also offer transfers from Cranbrook, Banff and the Calgary Airport—including by helicopter for those with deep pockets who are short on time.

Fun fact: RK Heliski also offers heli-hockey packages, where they fly guests up to the top of a mountain to play on a frozen rink. How Canadian is that?!

Ski Utah 3 ways: The best resorts for every type of skier 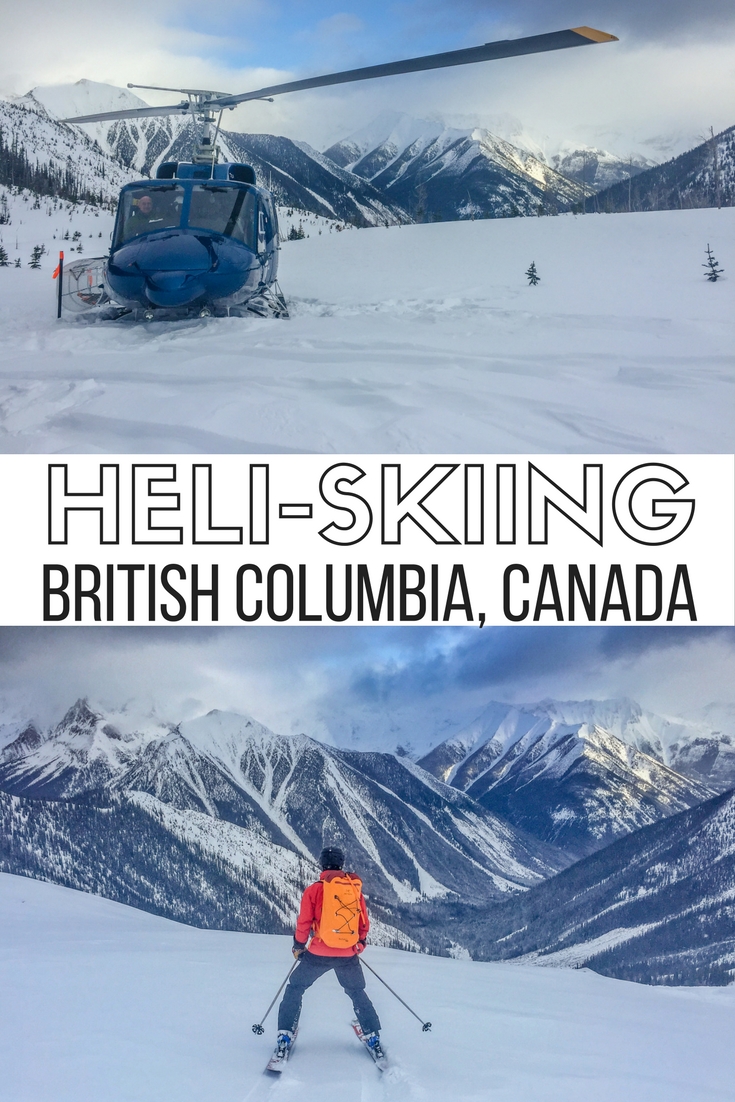 Globe Guide heli-skiied as a guest of RK. Heliski. As always, hosts have no editorial influence on articles.