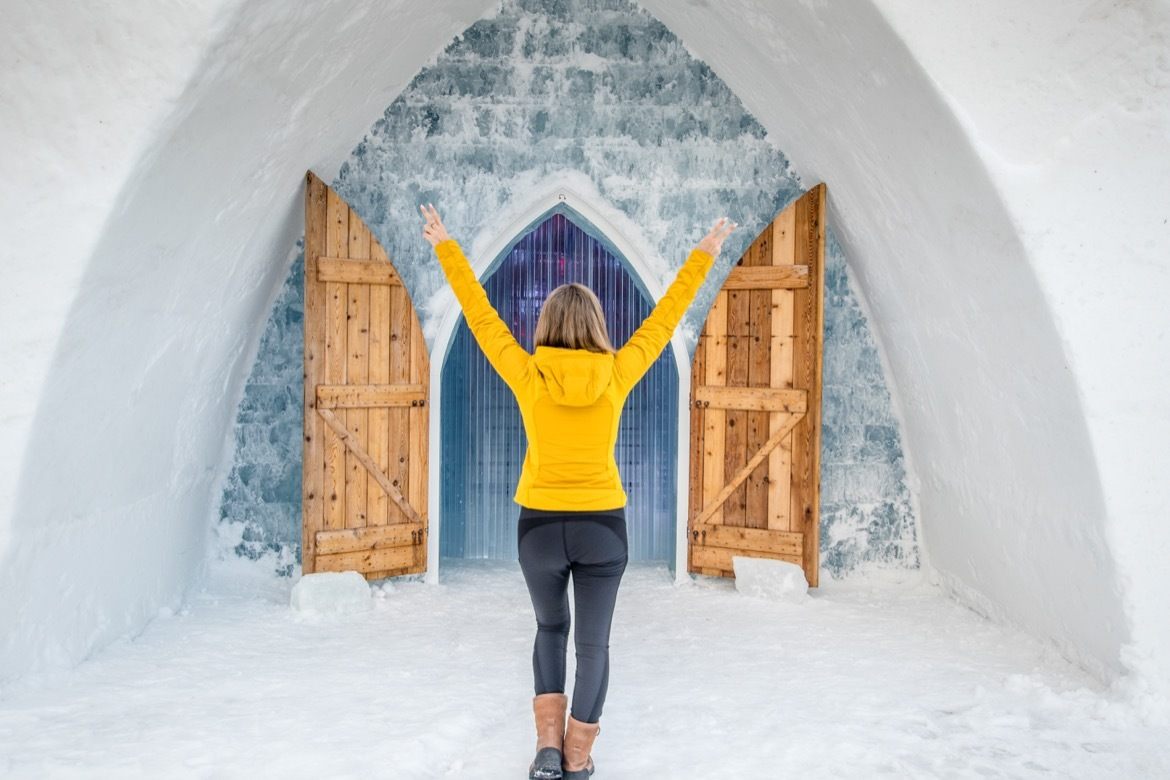 Snow crunched underfoot, as the frosty chill of the winter air hit my cheeks. A tunnel carved through the icy cavern was dimly lit, and muted lights buried in the walls cast a soft glow around the otherwise stark white surroundings. My footsteps were the only sound, as the noises of the outside world were deafened by the snowpack. Nighttime had arrived at Quebec City’s famous Hôtel de Glace, where I was about to sleep in a castle fashioned out of icicles.

This winter wonderland pops up every year at Village Vacances Valcartier, a resort area 30 minutes northwest of Quebec’s capital. A fun spot for families, the vacation village boasts an indoor waterpark, restaurants, shopping, an outdoor skating rink and sled runs, as well as Hôtel de Glace.

READ MORE: Fun things to do at Village Vacances Valcartier near Quebec City 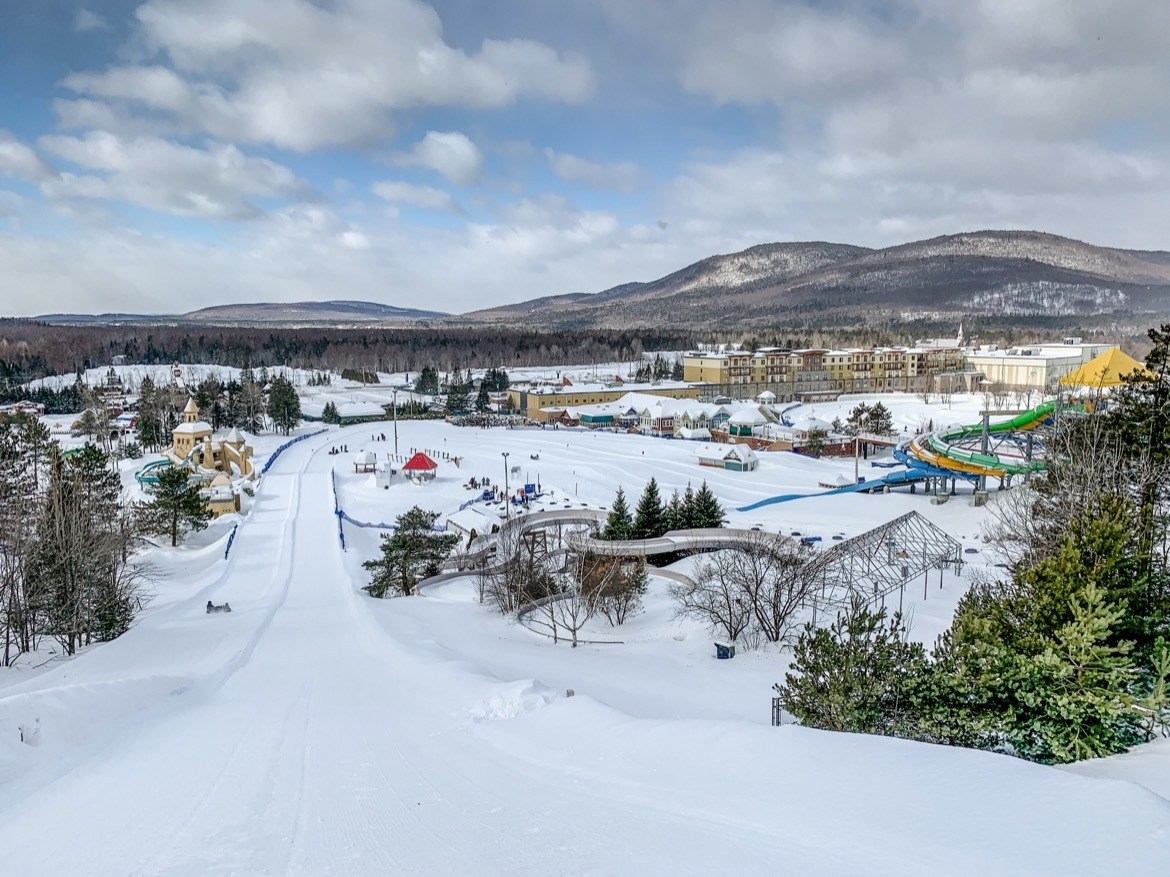 The Quebec ‘ice hotel’ was inspired by the Icehotel in Sweden, and the first Canadian version was built in 2001 at the base of Montmorency Falls. It’s moved a few times over the years, and now proudly sits at the base of Village Vacances Valcartier which makes a visit here one of the best things to do in Quebec City in winter.

Hotel de Glace has bragging rights as the only hotel in North America made entirely of snow and ice, spanning 30,000 square feet. It takes a crew of 50 workers and sculptors about six weeks to rebuild the masterpiece from scratch every winter, using more than 2,300 ice blocks and 40,000 tons of snow. 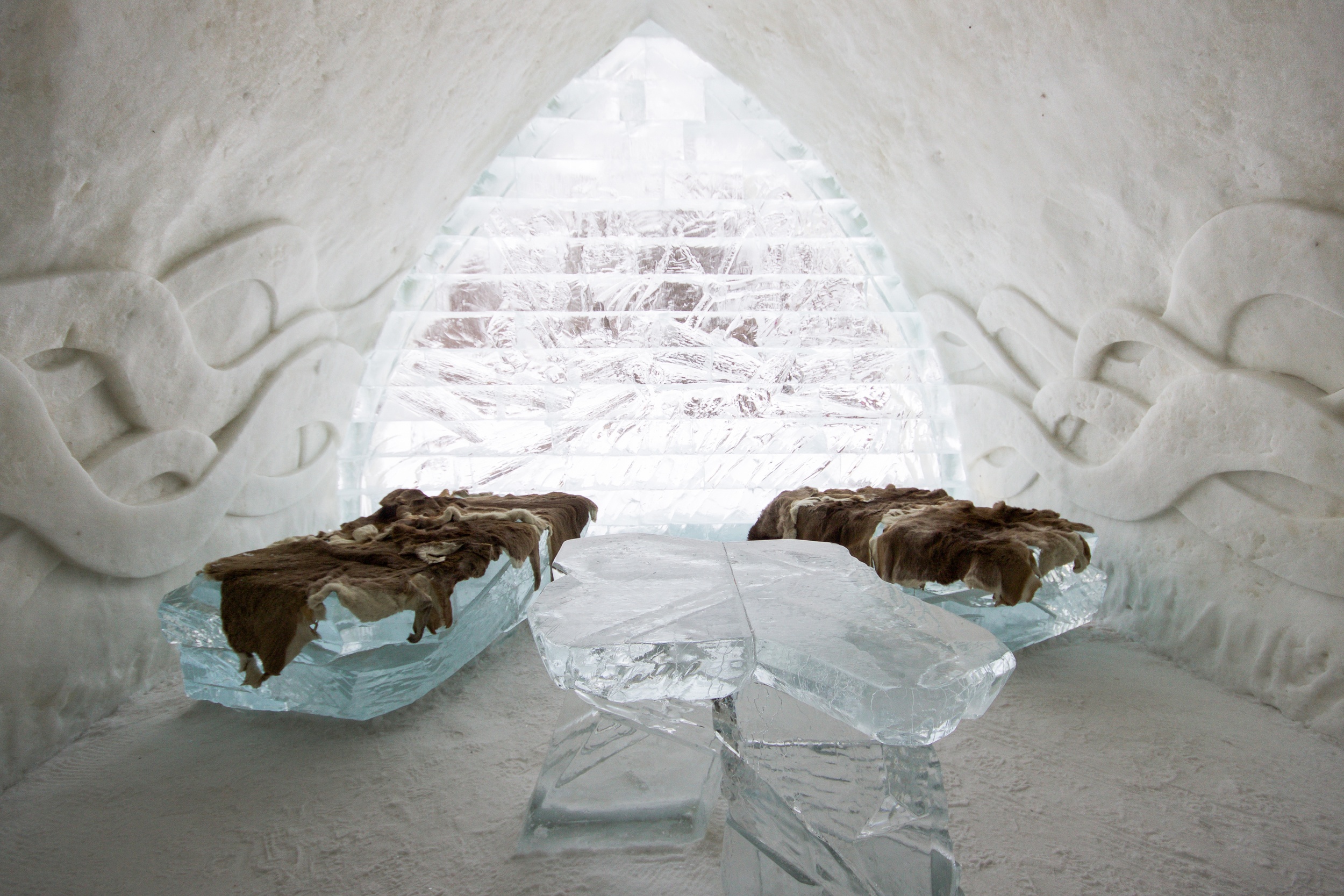 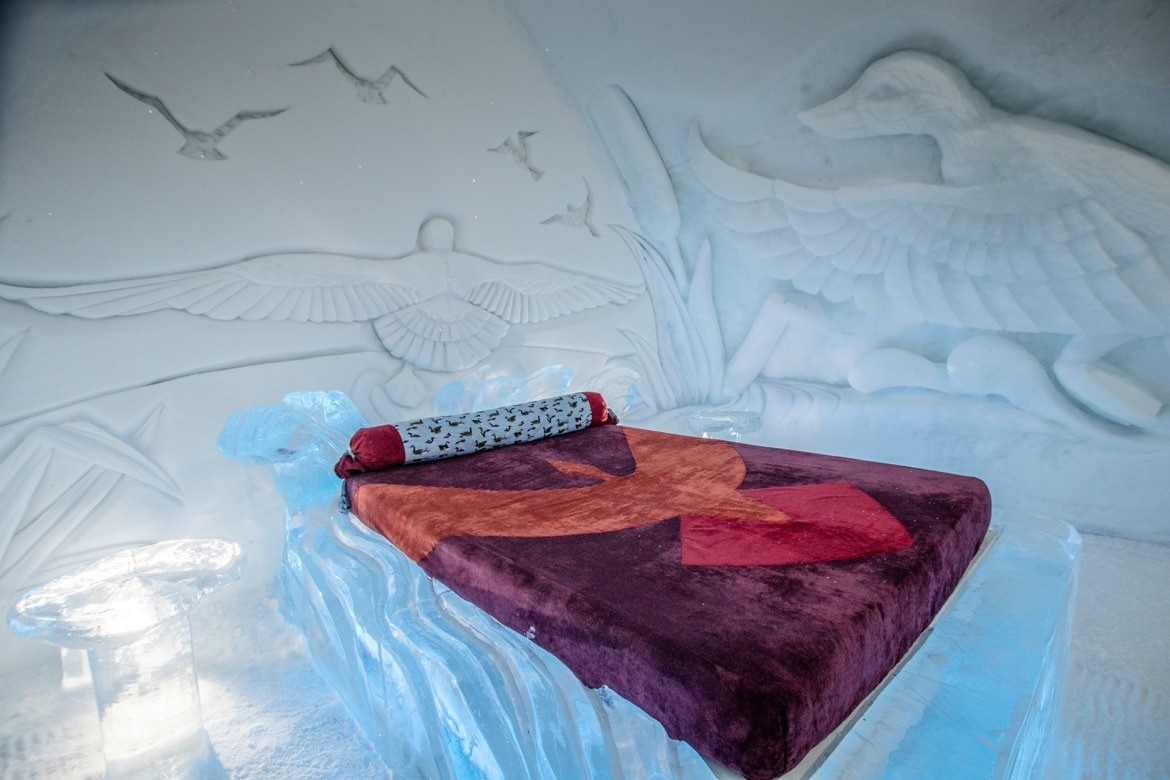 The first time I visited Hôtel de Glace was a few years earlier, breaking away from the festive Quebec Winter Carnival to tour the seasonal spectacle. Tickets for the Quebec City ice hotel tour include plenty of time to explore the various rooms and attractions, as well as a cocktail to sip at the ice bar. And yes, even the glasses are carved out of ice. Click to book a tour 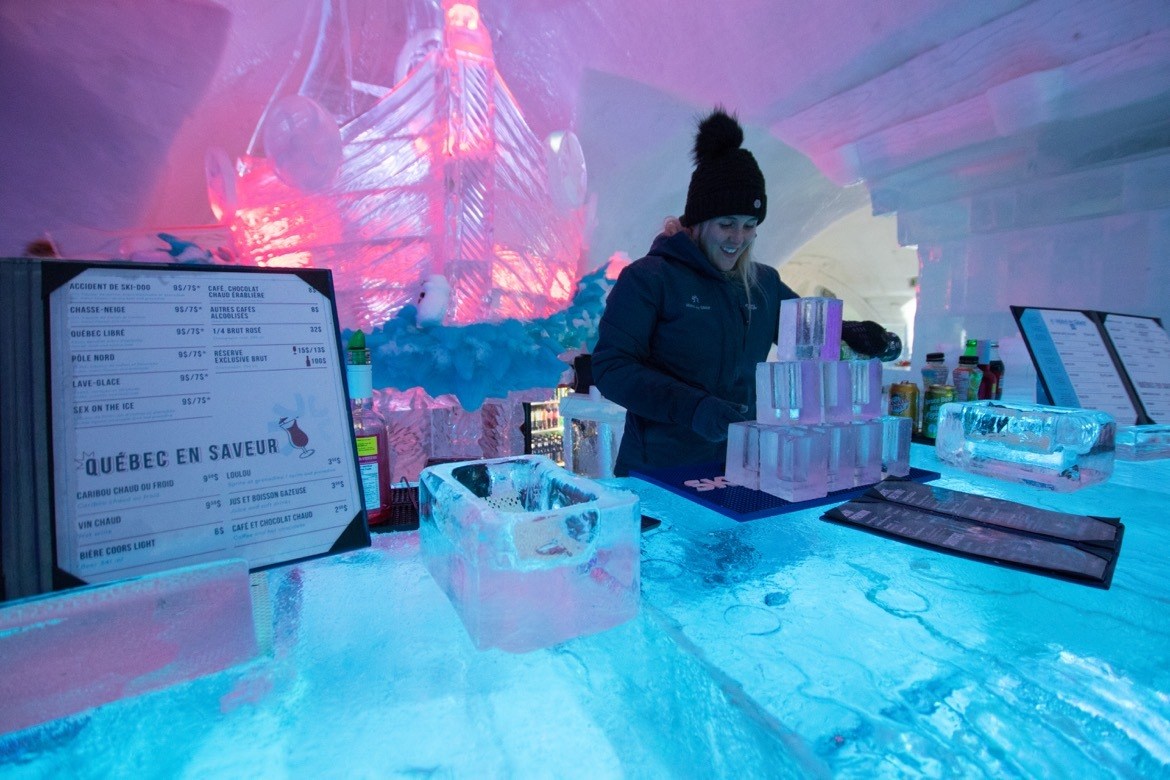 Visitors can marvel at the 21 feet high ceilings, zip down the two-storey ice slide, and peek into the individually-themed suites featuring impressive carvings that change from year to year: think Jurassic Park, a jazz room, a Carnival-themed one highlighting the loveable snowman Bonhomme, Chinese dragons and even one with a cozy fireplace. Be sure to peek into the romantic ice chapel, which regularly hosts weddings and is the ultimate Frozen-fantasy come to life. 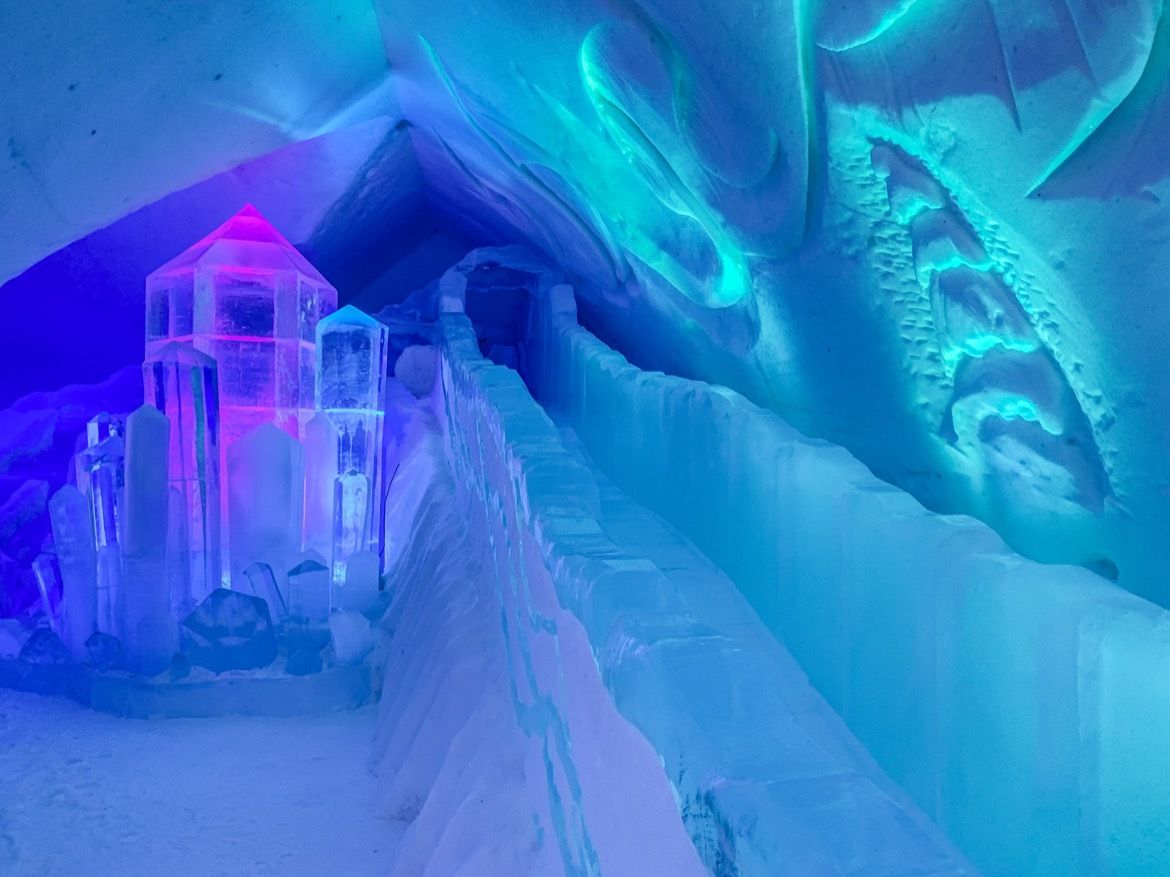 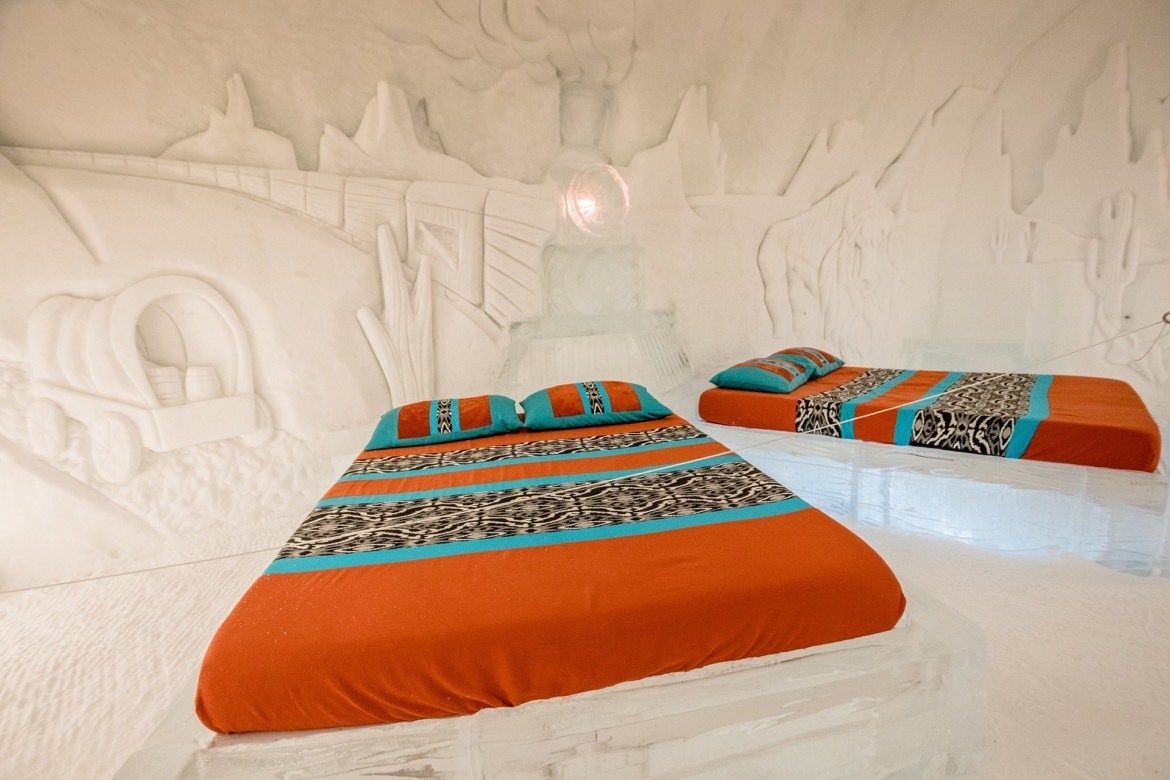 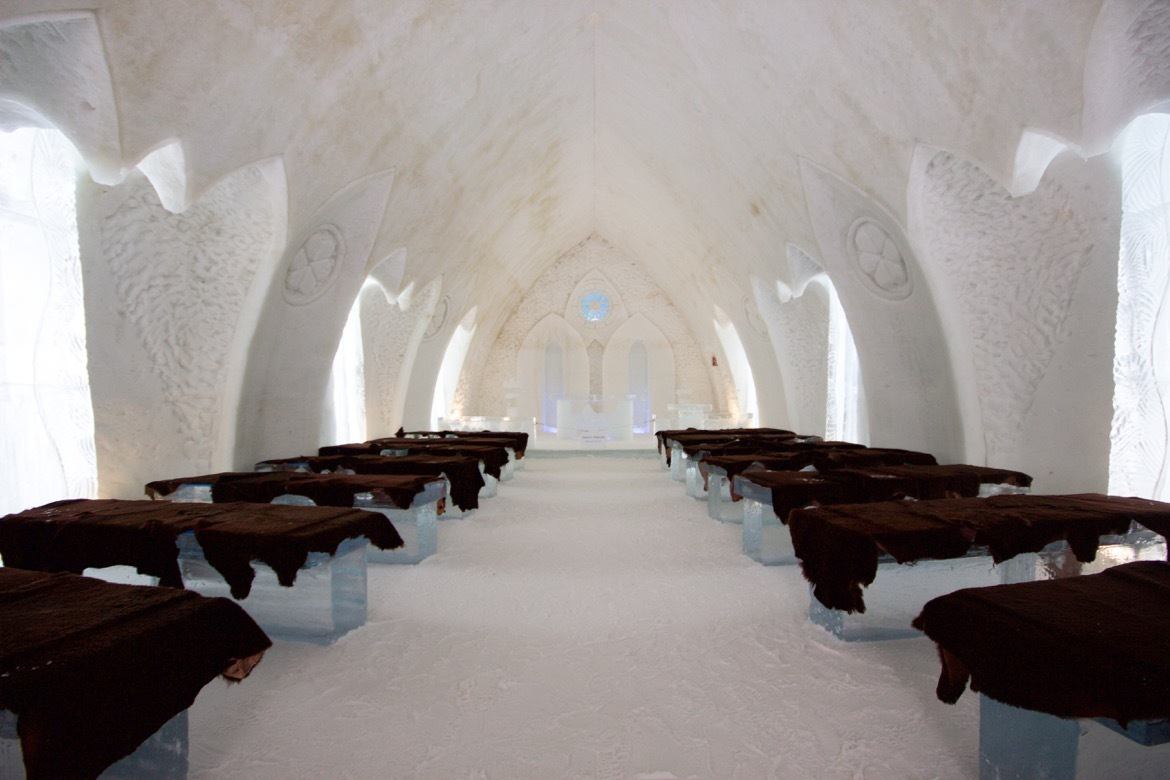 Inside the ice hotel chapel

What it’s like to stay in an ice hotel

Despite the frigid outdoor temperatures, it always remains around -5 °C inside Hôtel de Glace. Sure that’s still pretty cold for say, a Californian, but not as big of a deal for hardy Canadians who are perfectly happy to spend hundreds of dollars to hunker down in a weather-rated sleeping bag, and enjoy the novelty of sleeping in a hotel made of ice.

I was one of those crazy Canucks during my second visit to Hôtel de Glace, on a starry night in early March. Spending the night in an ice hotel was high on my bucket list, and I was thrilled to finally experience it no matter how uncomfortable the sleep might end up being. Turns out, there was absolutely nothing to worry about. 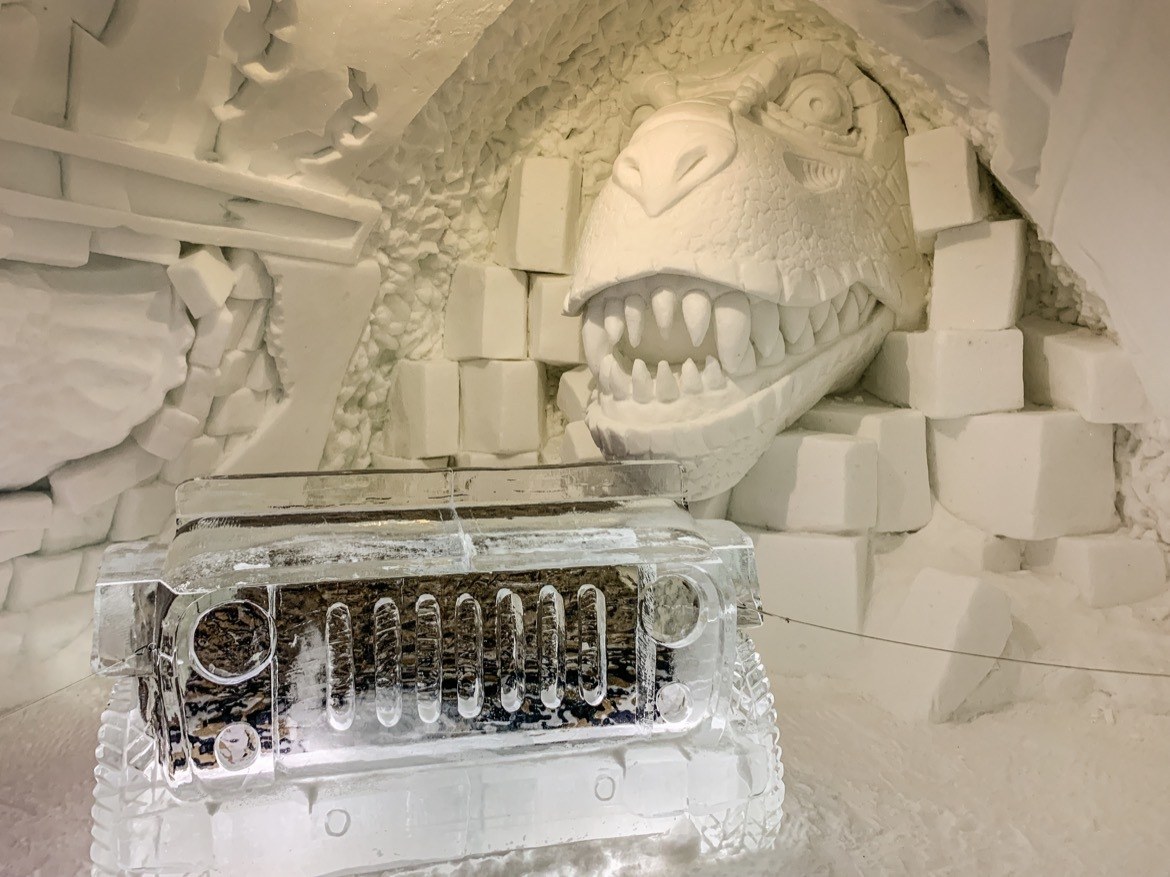 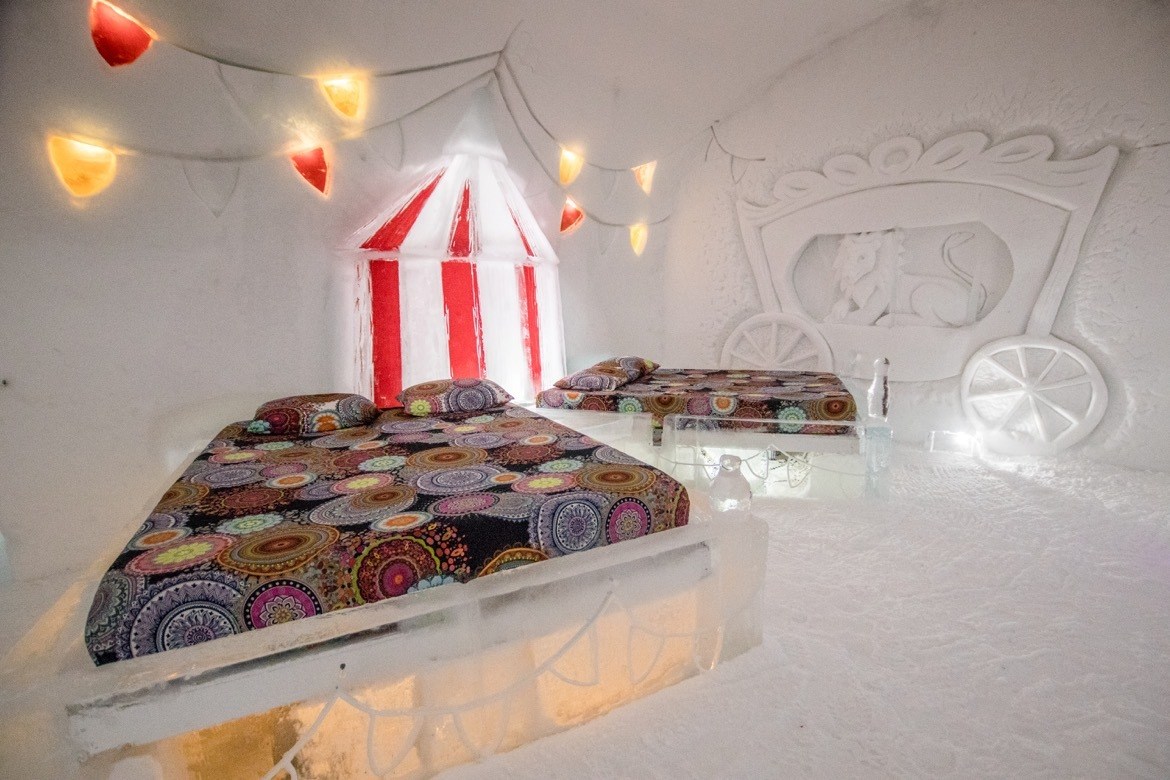 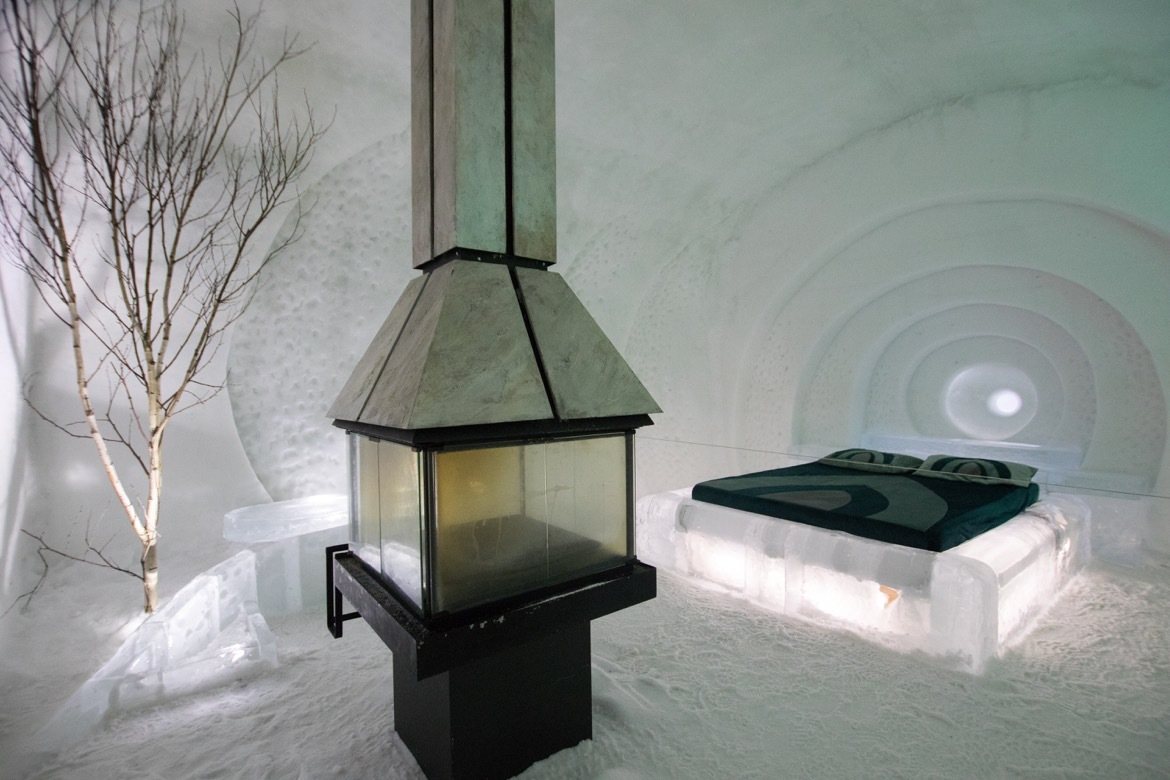 Hôtel Valcartier serves as the check-in area, which is a modern, four-star property at the base of Village Vacances Valcartier. Everyone staying overnight at Hôtel de Glace also gets a room in Hôtel Valcartier, so they have access to a bathroom, luggage storage or a warm bed if they get too cold outside. It turns out that very few guests end up coming in; staff say that there are usually only two reasons that people don’t stick it out, which is that they end up feeling claustrophobic or having to use the washroom. 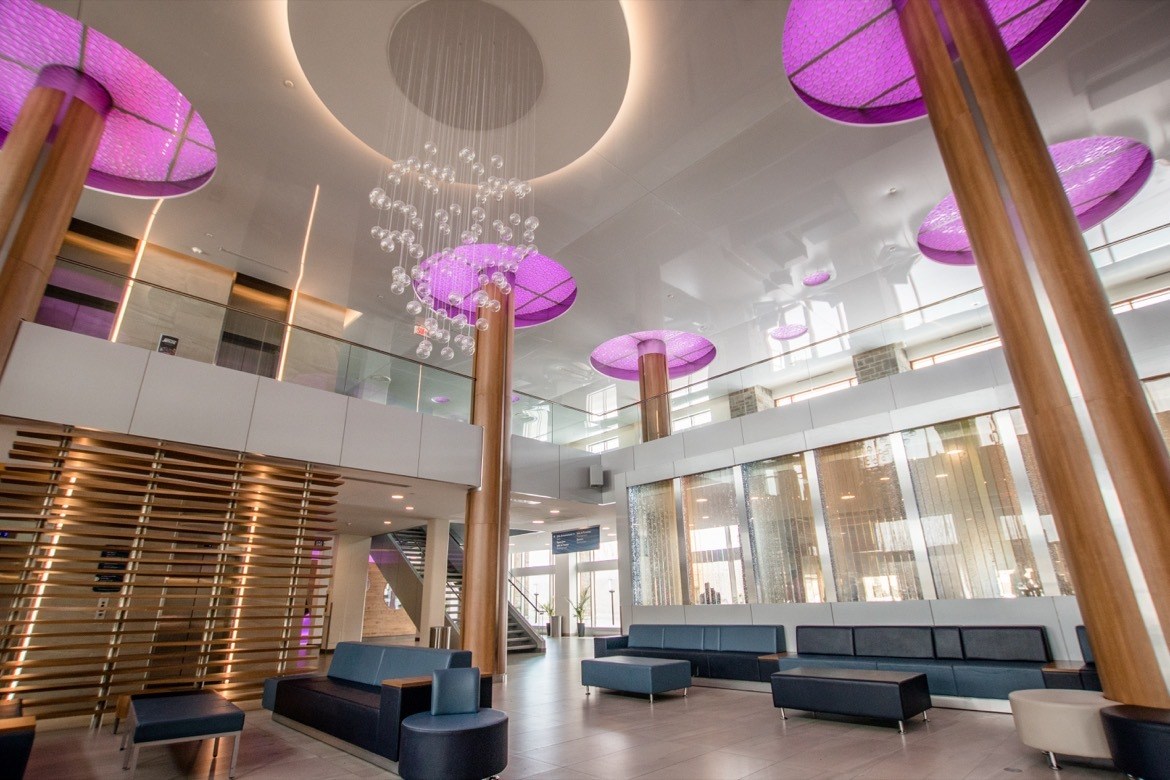 The lobby of Hôtel Valcartier 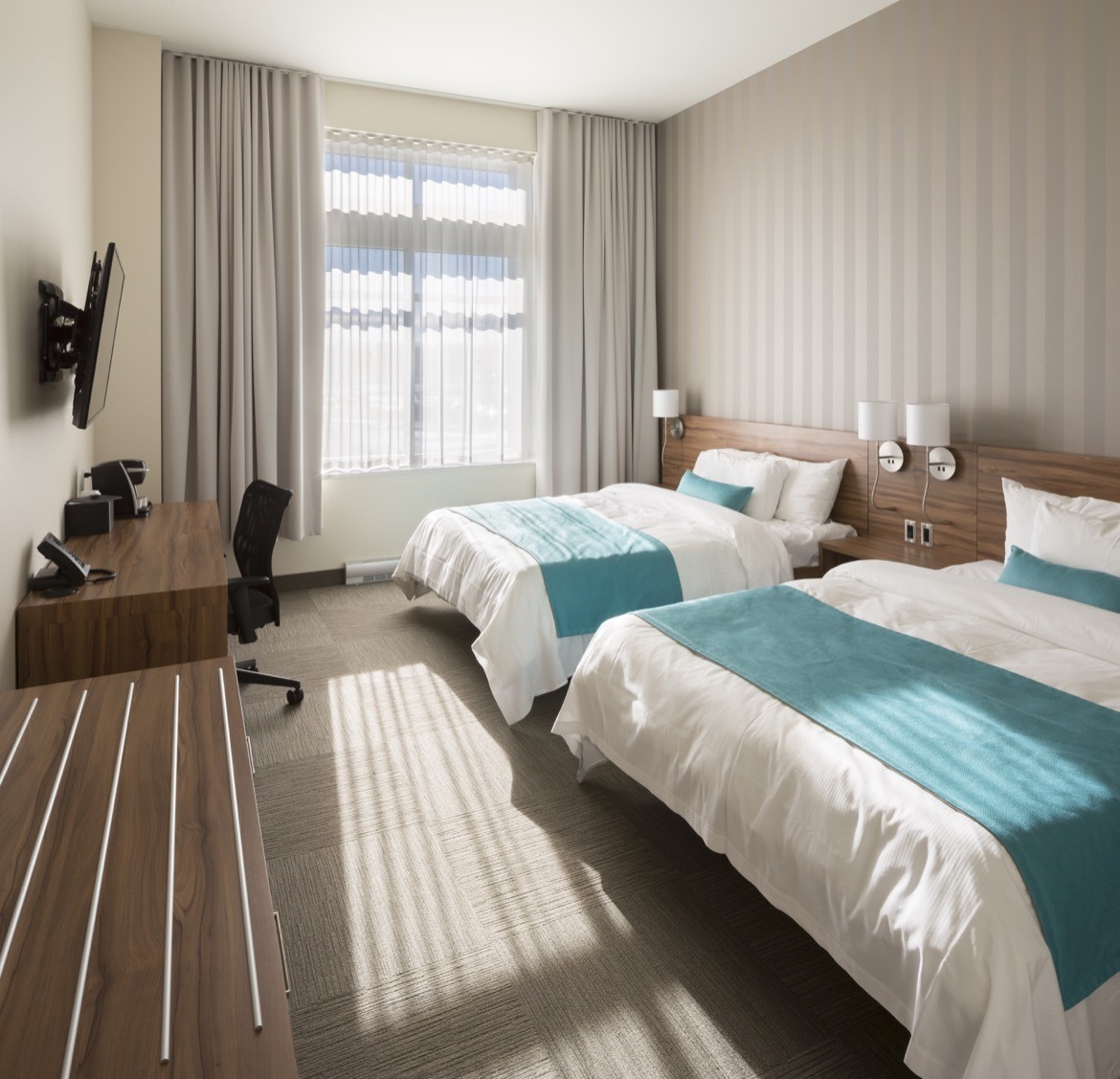 A room in Hôtel Valcartier

Every guest attends a mandatory information session, which outlines all the important details for enjoying a snowy sleep. Our group was taught how to properly zip ourselves into the snug, mummy-like sleeping bags, and given tips for what to bring and wear (not cotton!). We also learned how to best prep for the icy evening, which starts with unwinding in the Nordic relaxation area which has a Finnish sauna and piping hot tubs designed to heat up your internal body temperature. Then, you head over to Hôtel Valcartier to change into night clothes and use the bathroom one last time before tucking into your sleeping bag back at Hôtel de Glace. 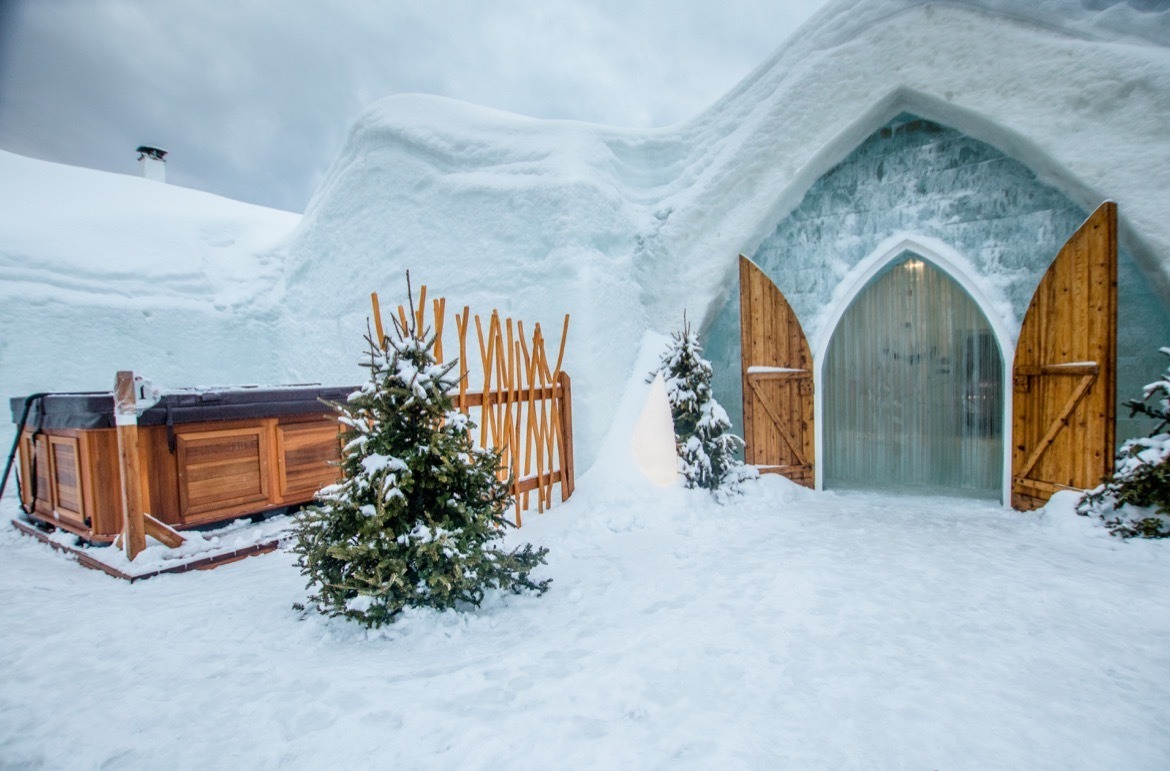 An outdoor hot tub area at the ice hotel 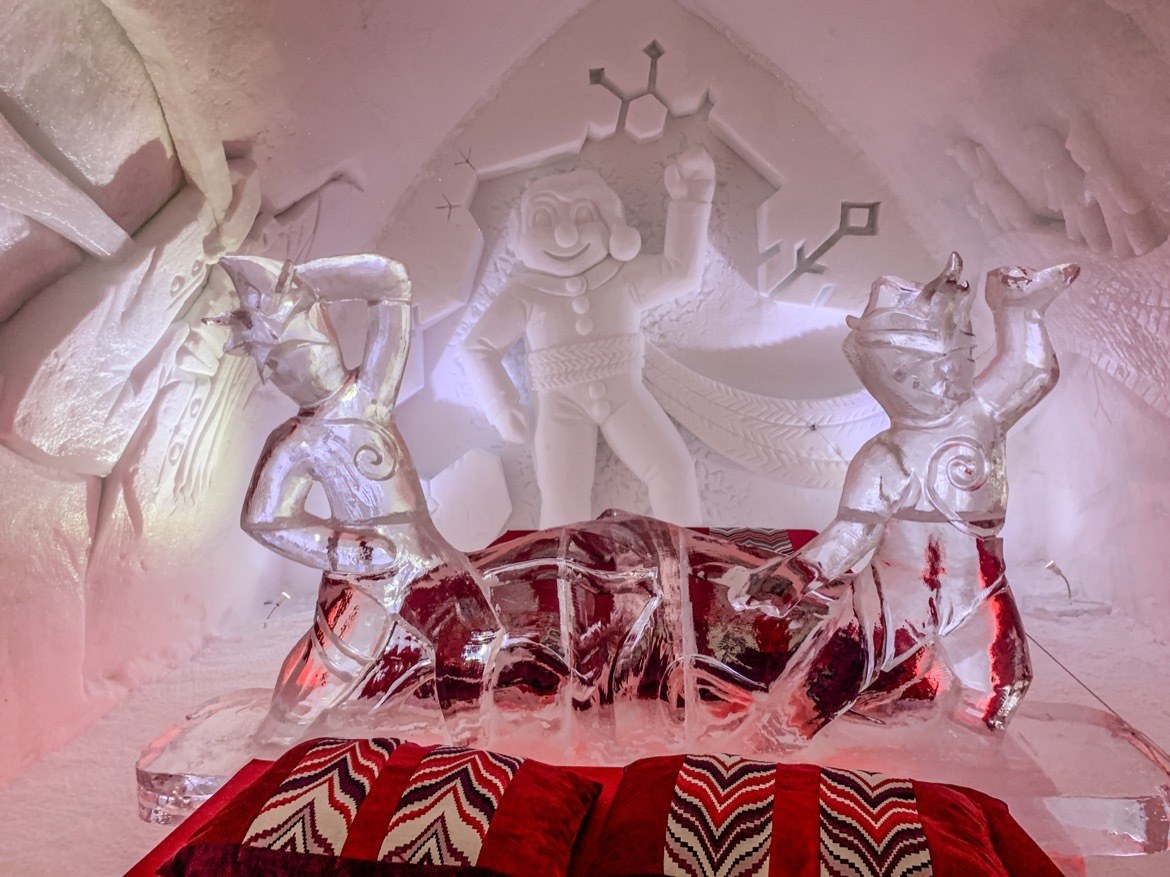 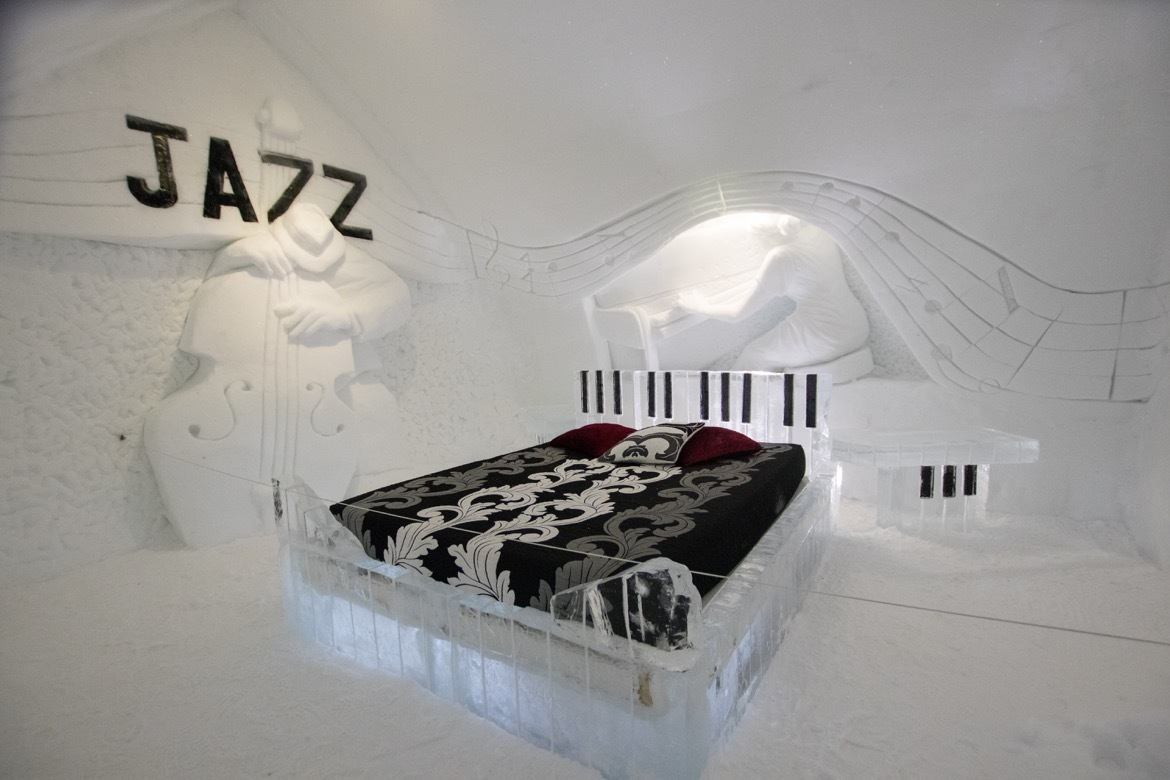 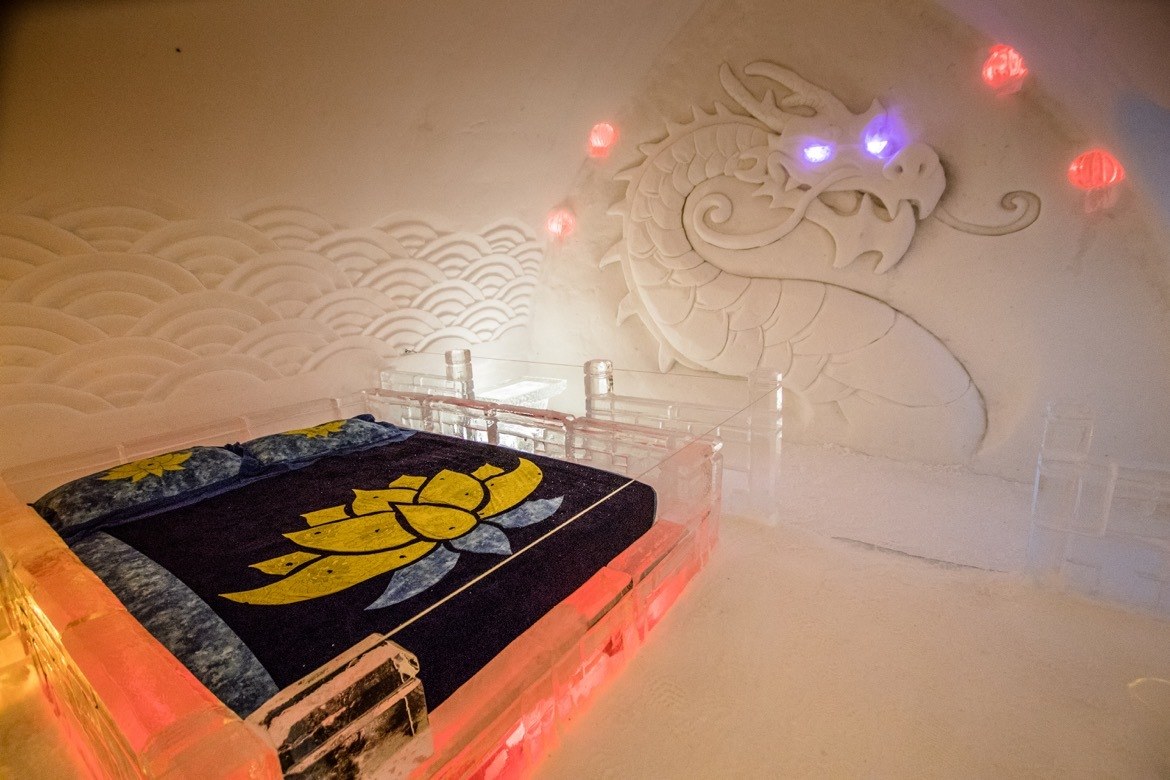 As darkness fell that night, guests gathered near the ice bar sipping cool concoctions while music pulsed around us and colourful, ever-changing lights lit up the scene. A series of ice blocks and chisels were set out, so we could channel our inner ice carver and attempt our own creations (some, with much greater success than others). 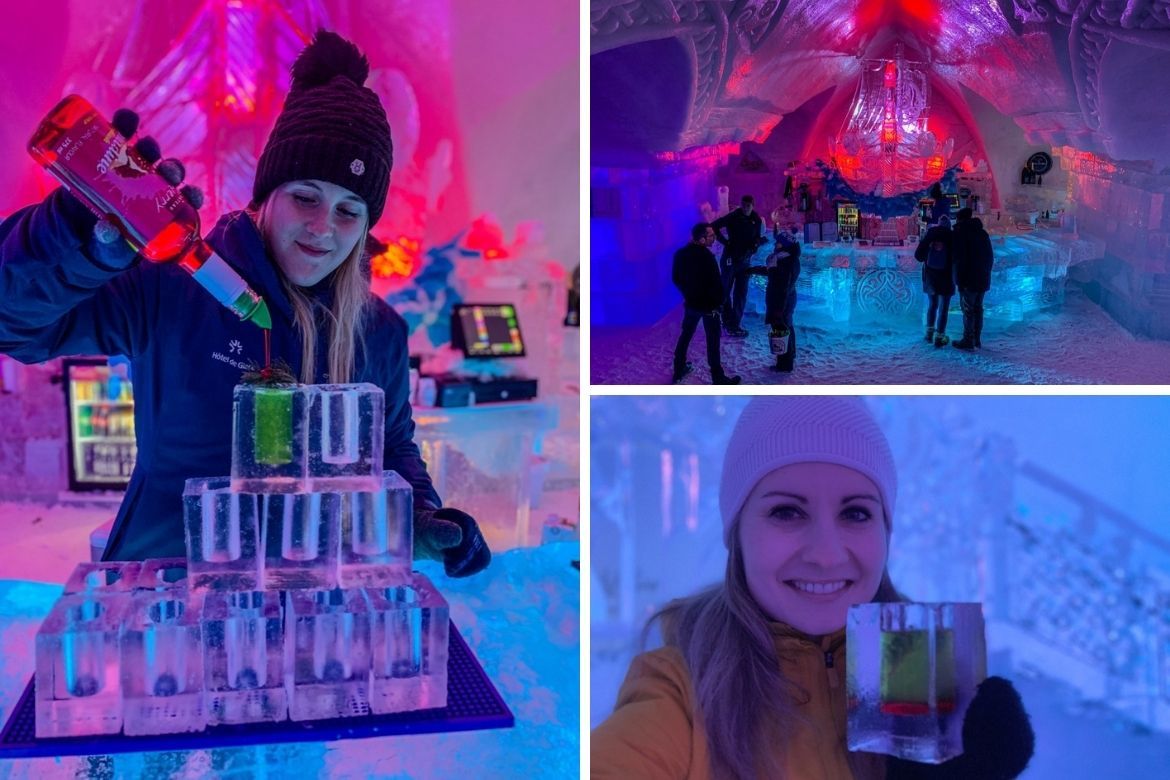 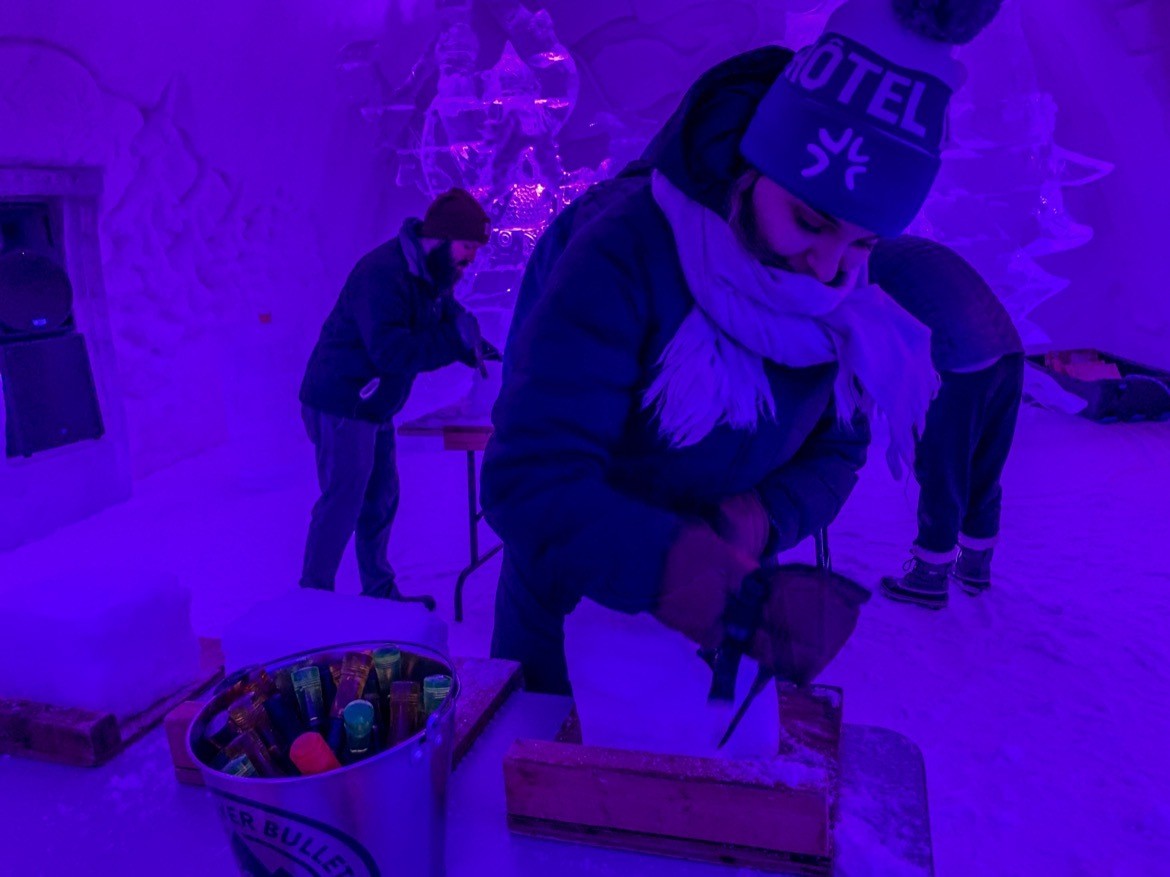 The scene outside was tranquil, as steam rose up from the toasty tubs creating a haze in the crisp night air. Guests’ light chatter floated above, as we soaked in the warmth and prepared our bodies for rest.

After a quick change, I headed to my room inside Hôtel de Glace where the bed was fashioned out of–what else–a block of ice, topped with a solid wood base and mattress. Shortly before bedtime, staff had snuck in a cozy sleeping bag, bed sheet and pillow, and I did my best to recall their instructions as I zipped the surprisingly-tight bag around me and settled in.

Oof, was it ever tight. 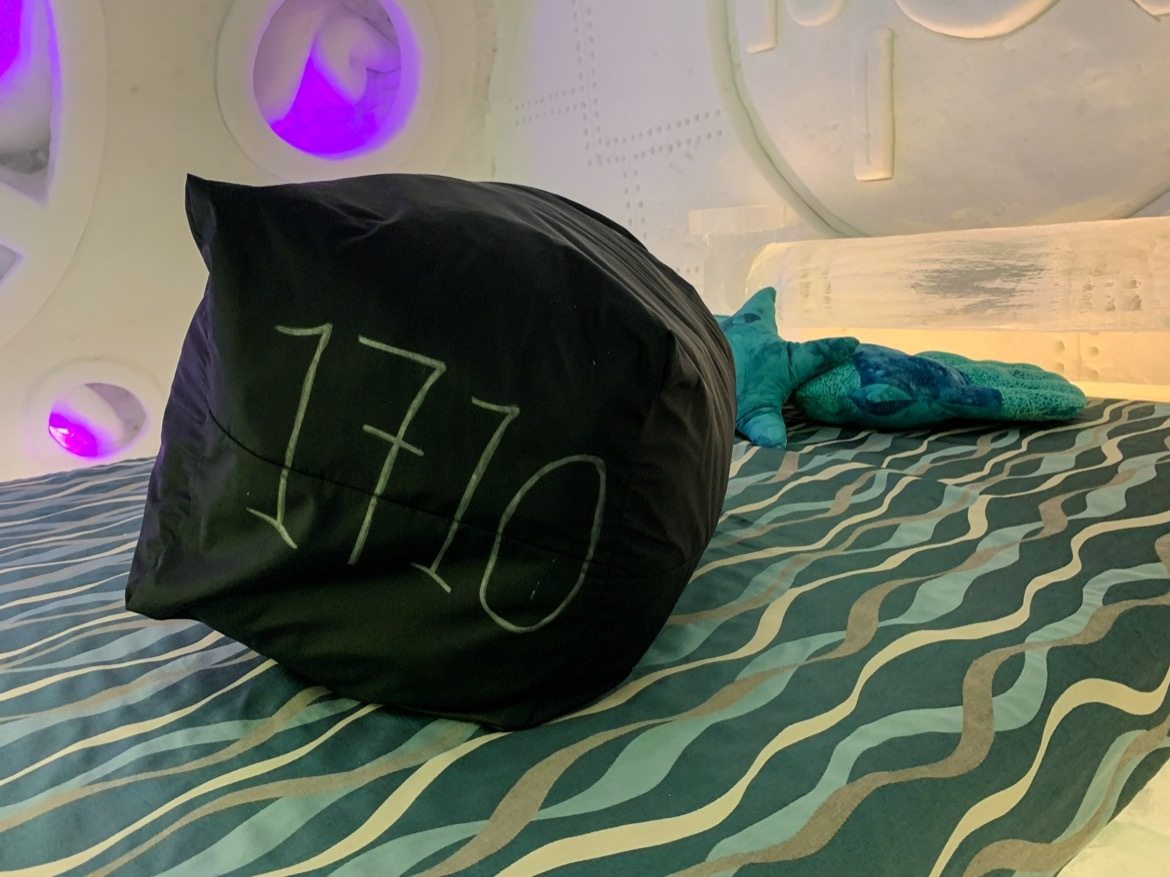 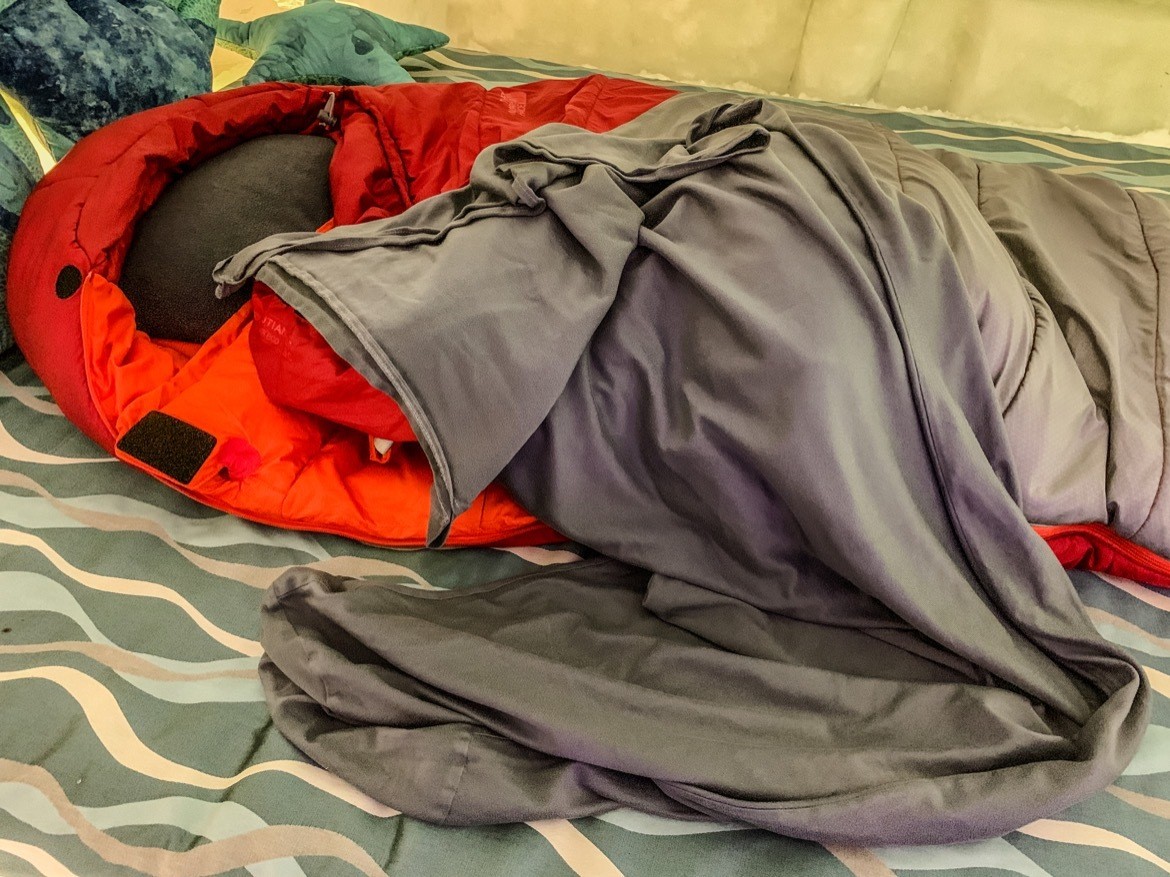 The sleeping set up at Hôtel de Glace

I suddenly understood why some guests give up due to claustrophobia; I’m not a claustrophobic person, yet still felt constricted and unable to move around. A brief panic set in, until I realized how warm I was. That meant I was able to peel off a couple of layers of clothing that I’d over-cautiously thrown on, creating much more space in the bag. With a light chill on my cheeks and the silence surrounding me, I soon settled into a blissful sleep.

The next thing I knew, a handbell rang from somewhere out in the adjoining hallway signalling that it was morning. Which completely blew my mind, because it’s not often I sleep through an entire night undisturbed and it was incredible to think I’d had such a restful sleep in a room that’s literally ice cold. I snuggled in deeper, luxuriating in the cozyness for a few minutes longer before managing to coax myself out and slip into the change of clothes that was buried at the bottom of my sleeping bag to keep them warm.

As I made my way down the halls of the icy cavern and emerged outside, dazzling beams of sunlight made sparkles in the snow, and I could already hear the excited chatter of children heading out for a fun day of sledding on the nearby hill. It was the perfect way to welcome a new day, and a fitting end to an incredible stay at Quebec’s ice hotel. 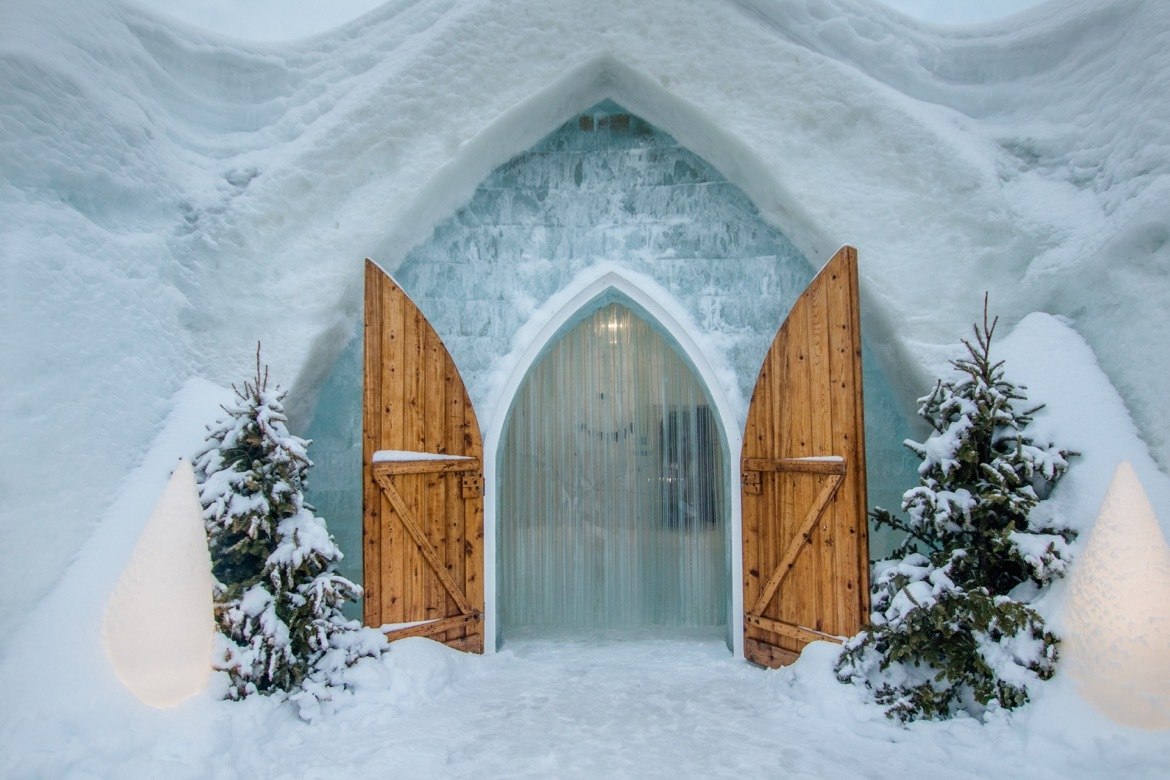 There are two ways to visit the Quebec City ice hotel. The most common is to book a Quebec ice hotel tour, which includes admission and transportation to Village Vacances Valcartier (a 20 minute drive from the city). Click to book a tour

For the ultimate experience, stay overnight at Hôtel de Glace. Be sure to book early, as it’s a short season that usually runs from early January to late-March. Click here to book

Globe Guide stayed at the ice hotel as a guest of Hotel de Glace. As always, hosts have no editorial influence on articles. 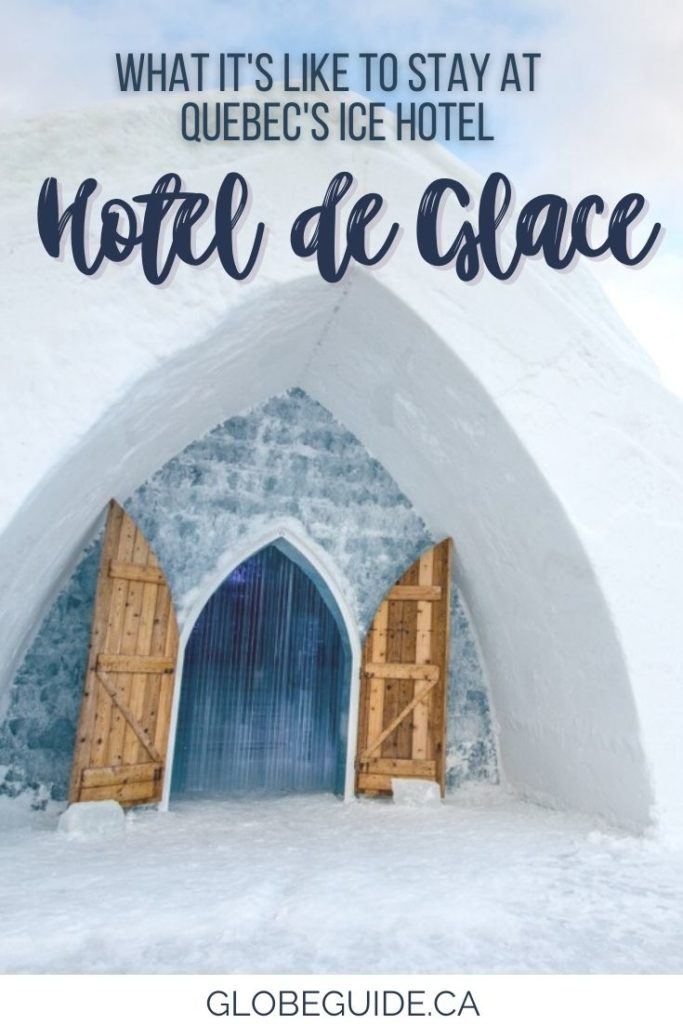