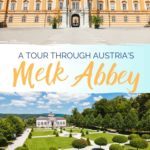 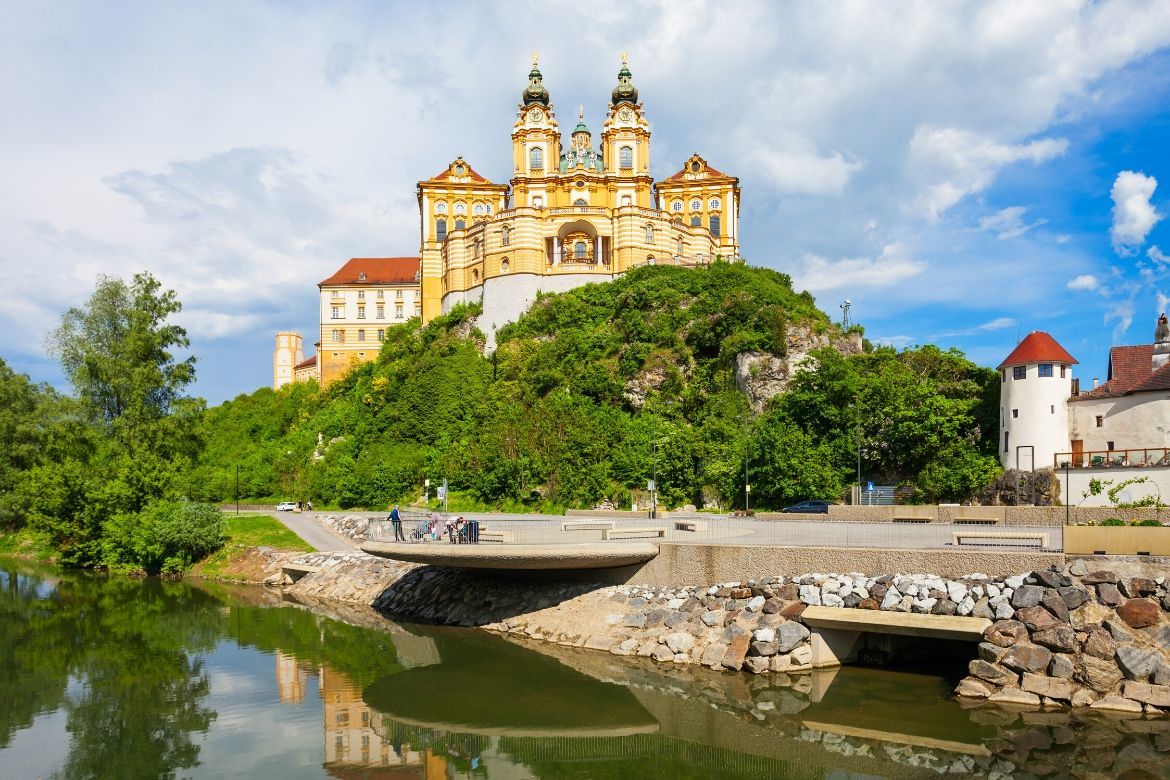 On the banks of the winding Danube river, past crumbling castles, quaint towns with orange-topped roofs and vineyards bursting with grapes ready for harvest, is one of Austria’s most iconic sites: Melk Abbey.

The monastery is impossible to miss—especially for those approaching the town on a river cruise—as it’s perched high on a hilltop overlooking the beautiful town below. Its sunshine yellow facade is a welcoming sight, and the twin spires and huge octagonal dome make for an inspiring scene. 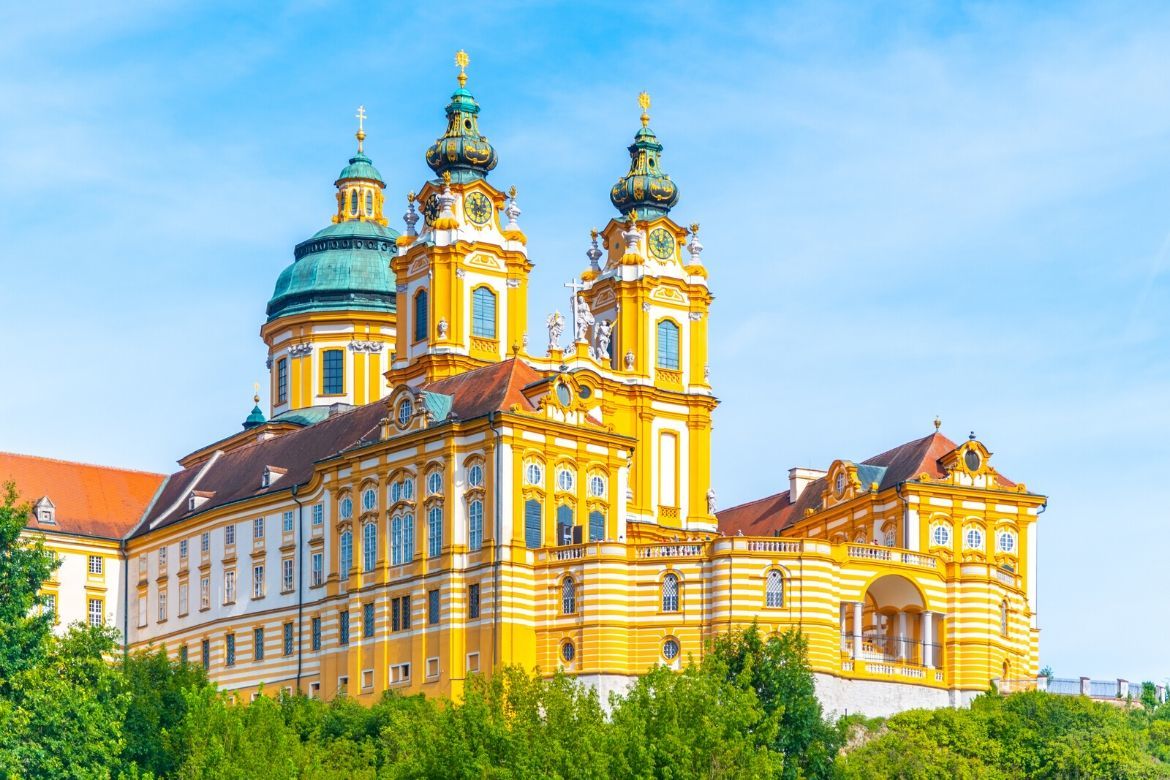 Built in the early 1700s as a royal palace, Melk Abbey was eventually gifted to Benedictine monks who turned the estate into a fortified abbey. Today, despite being open to tourists, it continues to serve its religious purpose and is home to hundreds of pupils training to become monks. While monk sightings at the Melk Abbey aren’t guaranteed, stunning lookout points, incredible architecture and some rather shocking surprises make it well worth a visit. 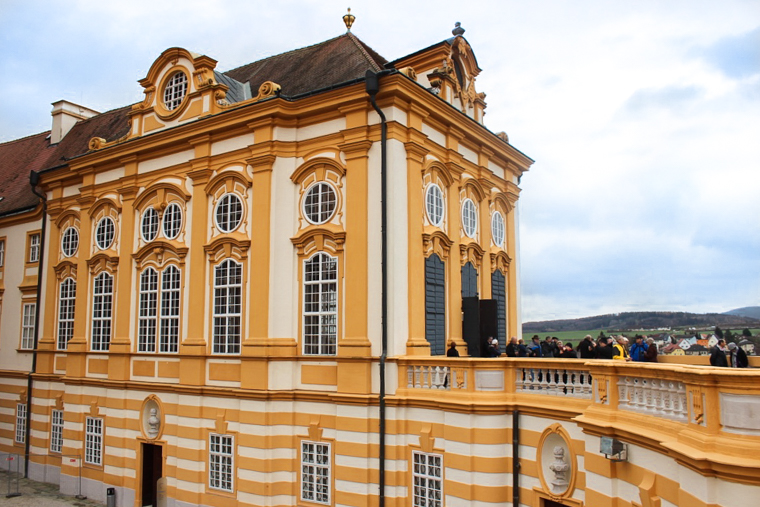 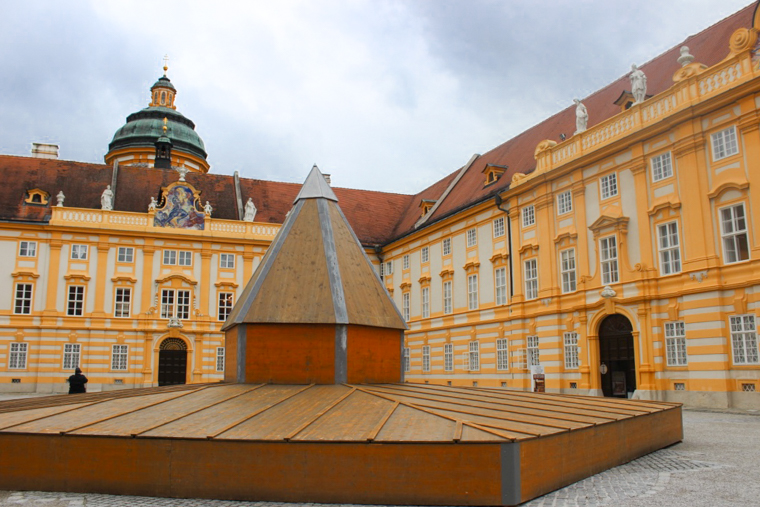 A courtyard in Melk Abbey

Melk Abbey tours begin by passing through the northern bastion’s giant archway and continuing through one of the expansive courtyards to reach the Melk Abbey Museum. Holding treasures that date back centuries, each room displays important artifacts such as a book circa 1574, a portable altar (yes, that’s a thing) from the 11th century and jewel-encrusted religious ornaments. 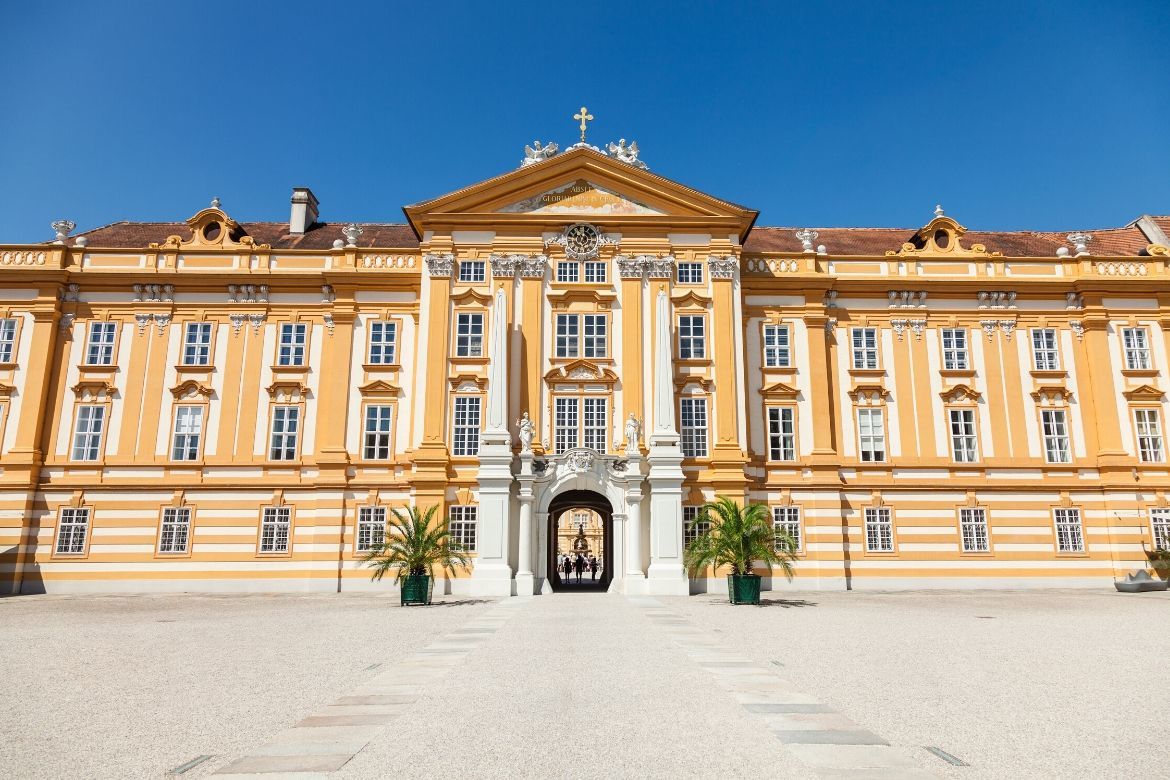 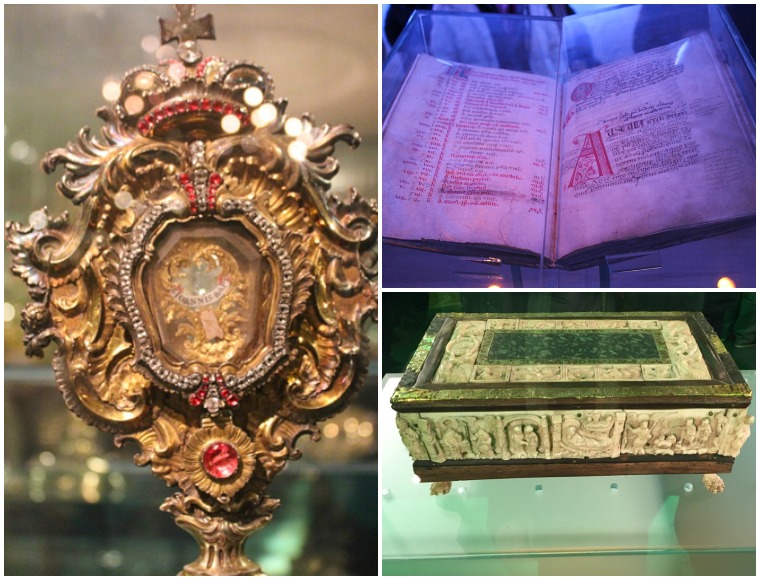 One of the first surprises is found early on, in a room with a rather ordinary looking coffin. However, it turns out it’s an eco-friendly, reusable coffin. Yes, reusable. It doesn’t take too long to figure out why it only got about six months of use before area residents bid adieu to the idea, and it was forever banished to spending life in a museum. 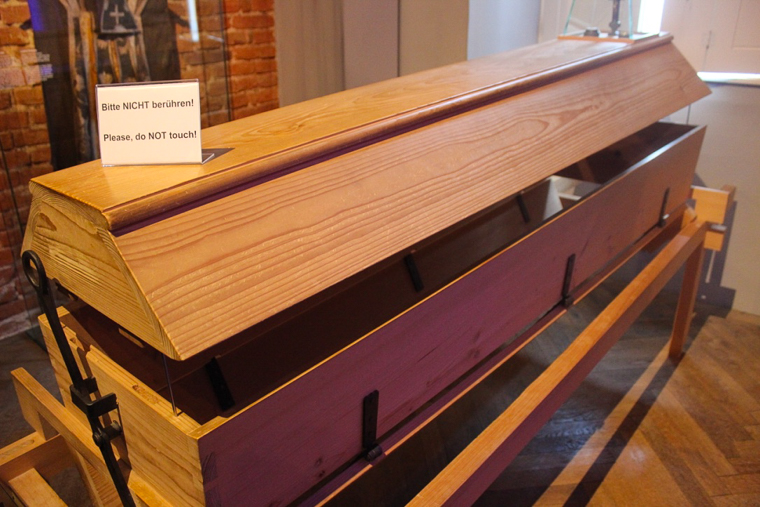 Visitors then make their way to the Marble Hall, which just might be one of the most opulent dining rooms ever designed. World-class artists and sculptors created a masterpiece of gold-gilded frescos and a painted ceiling that rivals that found in the Sistine Chapel—but without all the crowds. 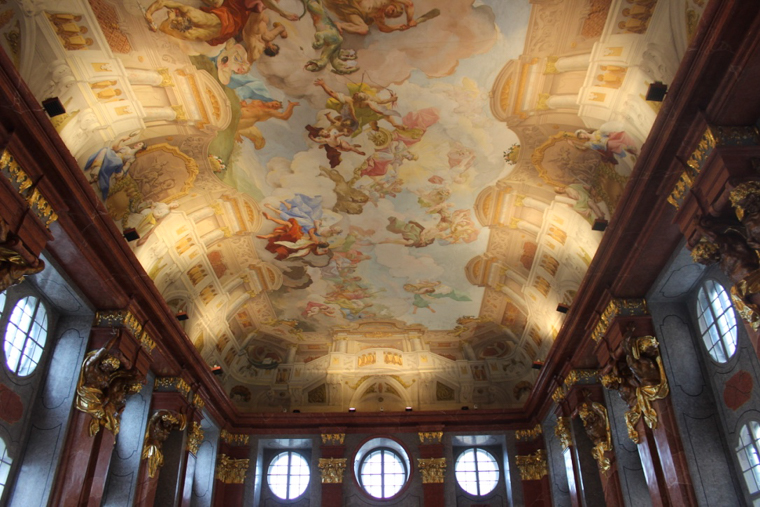 The Melk monastery’s treasure is the library, which bookworms may have a hard time tearing themselves away from. The dark, yet grand two-storey room boasts floor to ceiling bookshelves, holding about 80,000 leather-bound medieval manuscripts, many of which are hand-written. It’s hard to restrain oneself from reaching out to touch them—a privilege only granted to the monastery’s scholars who still use them to this day. Guests aren’t allowed to take photos inside the library, but suffice it to say it’s a special room that one doesn’t soon forget.

The grand finale is the grandiose Abbey Church (Stiftskirche). Its domed ceiling soars 65 metres high, and the extravagantly decorated walls frame St. John the Baptist’s Altar, which depicts the baptism of Jesus by John. 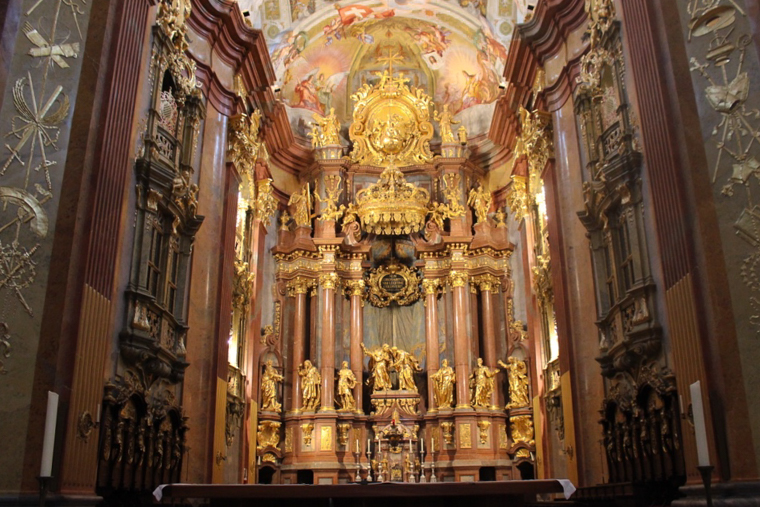 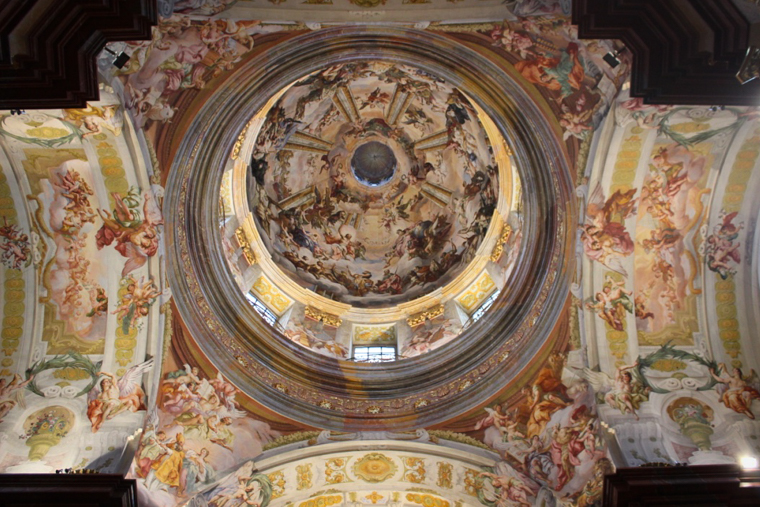 One would think its golden facade would be the showstopper, but just to the right is a very unexpected sight: a glass saracophagus with the skeleton of a catacomb saint. It was gifted to the Melk Abbey in 1762 by Maria Theresia, who was the Austrian archduchess at the time. While there’s no word exactly how she came to have a skeleton in her possession, it sure gets people talking! 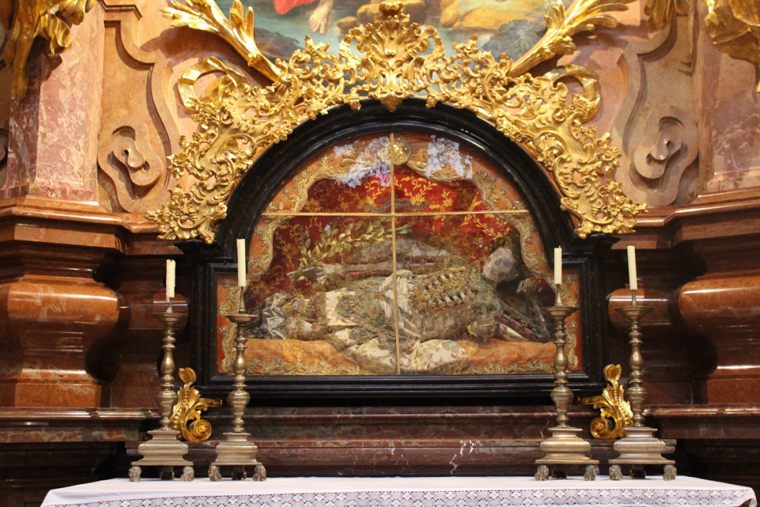 To make their way back outside, visitors head down the winding Imperial Staircase (Kaiserstiege) which draws comparisons to the staircase found in the Vatican, and even has a mirror at the bottom (hence the reflection in the photo below). 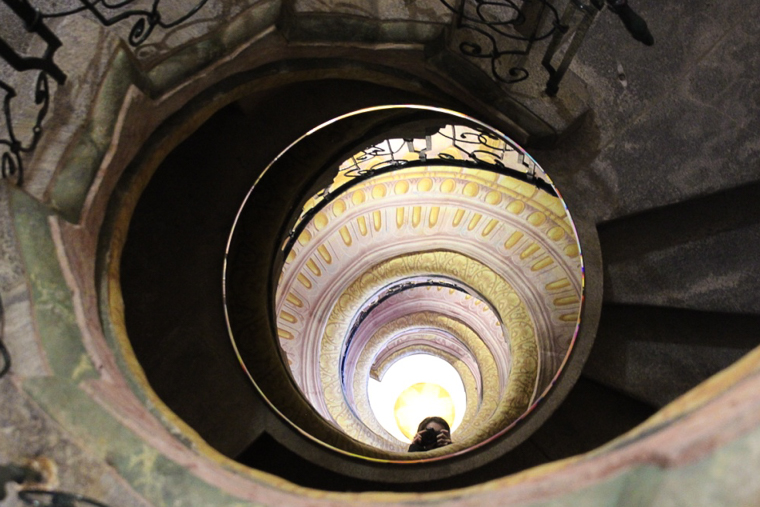 From there, it’s back out onto the terrace for one last sweeping view of the Wachau Valley and Melk Abbey, before heading down the cobblestone steps to explore the rest of the beautiful Austrian town. 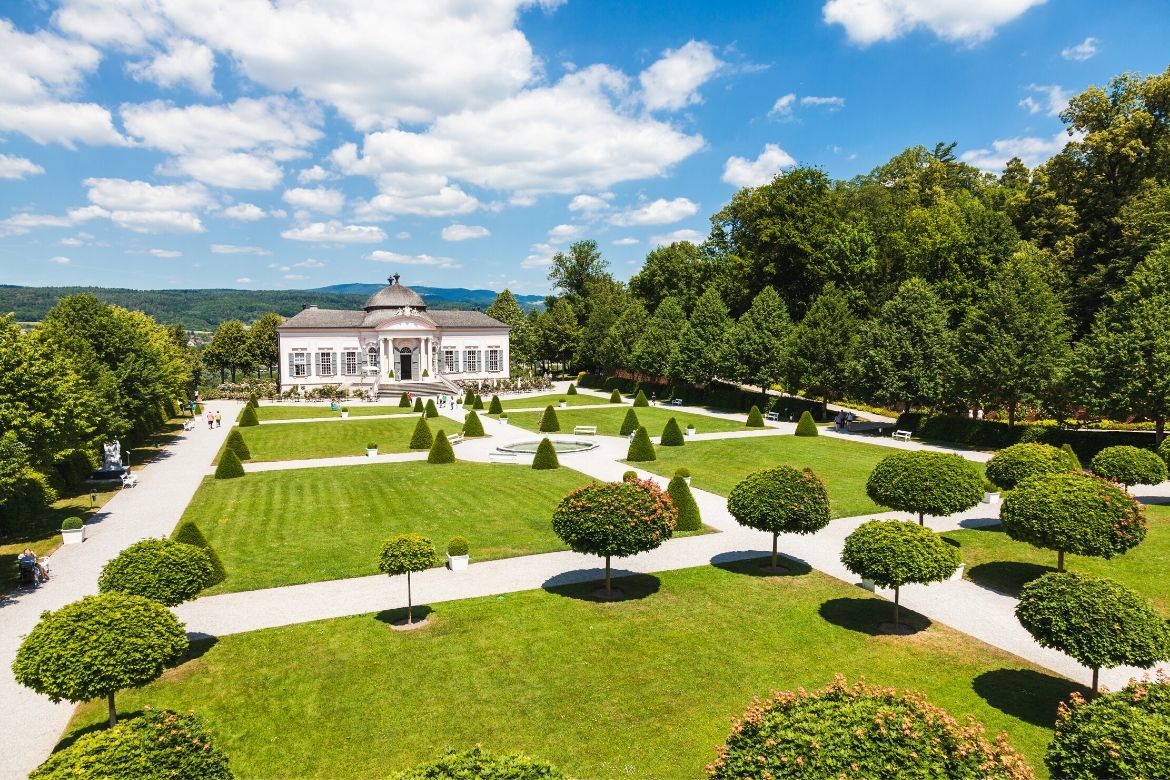 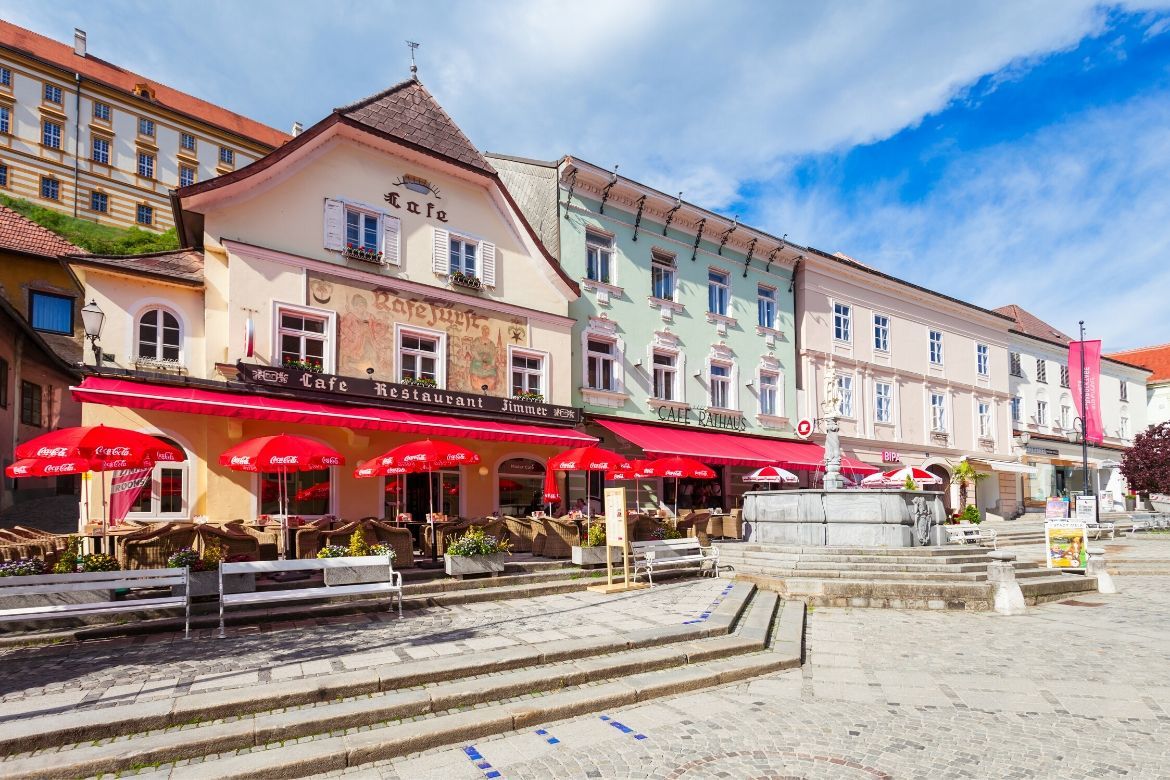 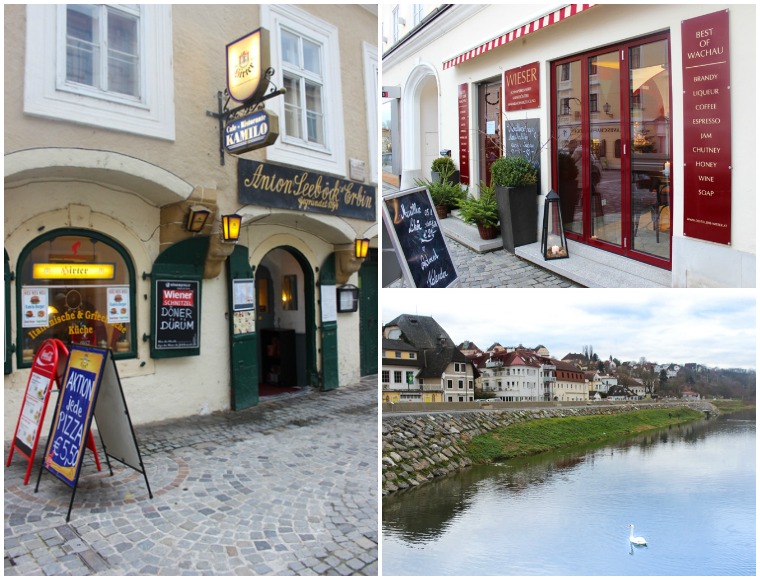 How to get to Melk Abbey: It only takes one hour to drive or take the train from Vienna to Melk, which makes Melk Abbey one of the popular day trips from Vienna. You can also combine a visit to the abbey with a Wachau Valley tour, which typically includes things like wine tasting and a river cruise: 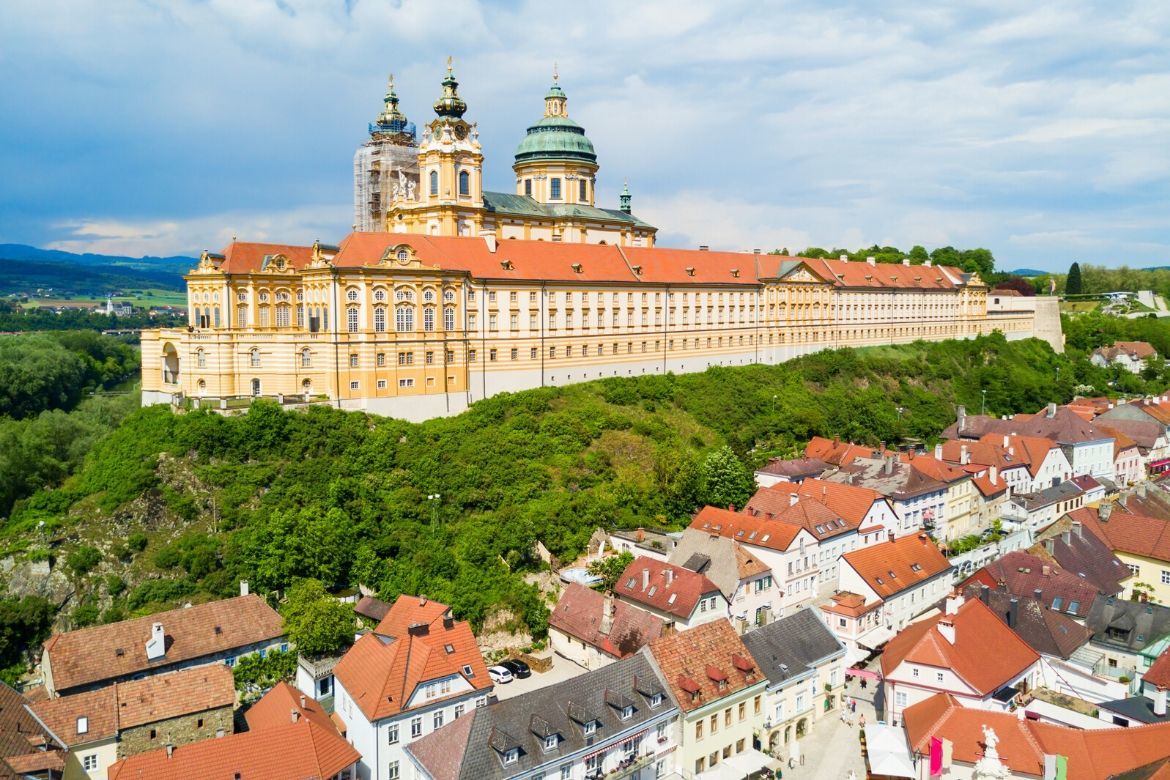 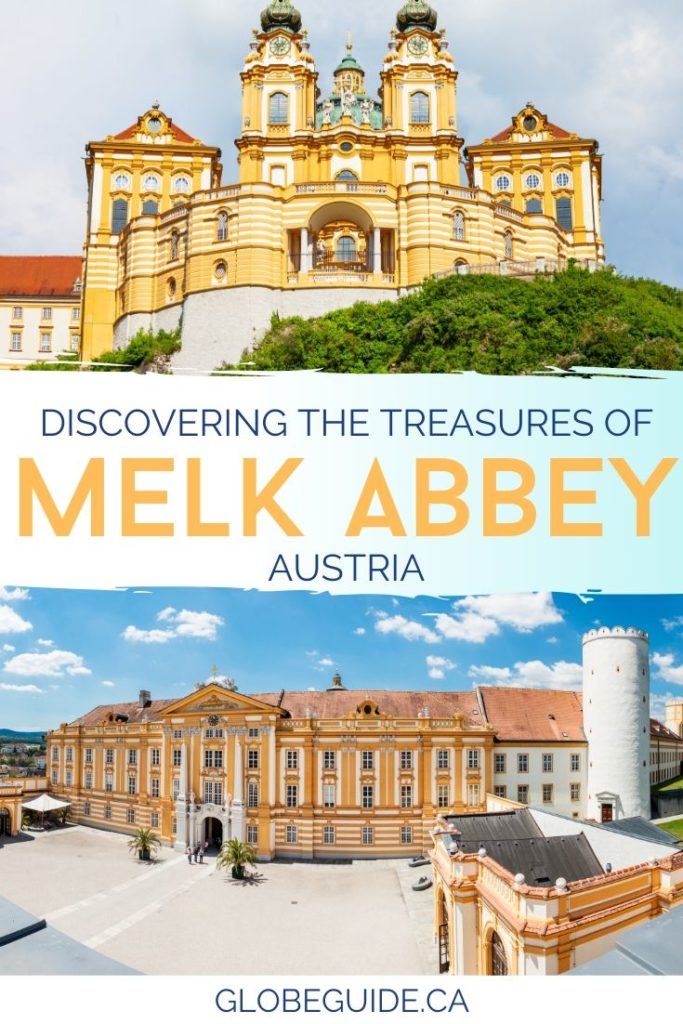 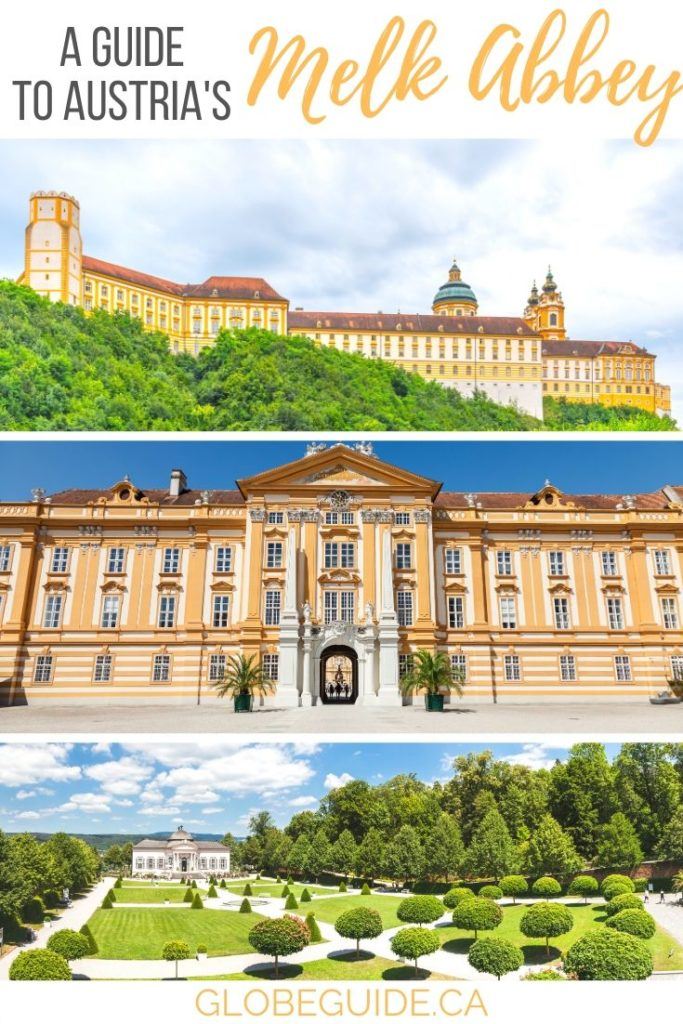 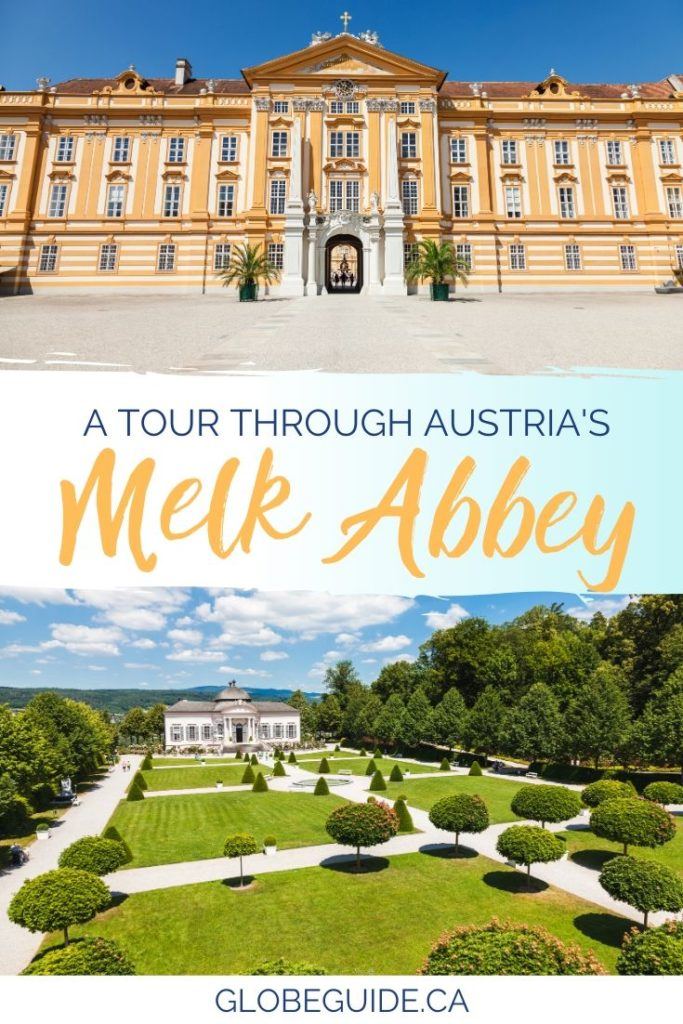