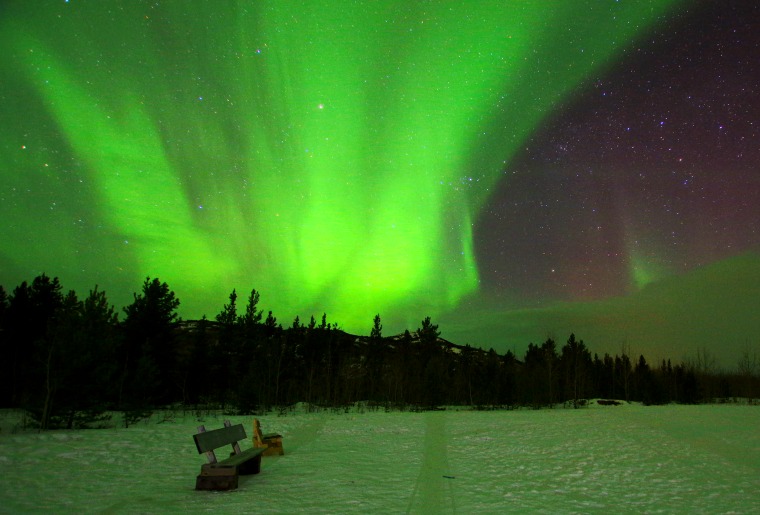 That photo above? Yeah, it’s not mine. It was taken by my friend Leigh, who headed out on a northern lights viewing tour just a few days after I did—with much more spectacular results. That’s lesson number one of northern lights viewing: hope for the best, but plan for the worst. In other words, there are no guarantees that Mother Nature will put on a spectacular show that sees vibrant hues of green and purple dance across the night sky—but it’s sure worth the effort of trying to get a glimpse.

Every year, thousands of people flock to northern locales like Sweden, Finland, Iceland and Canada in hopes of capturing the captivating aurora borealis. The Yukon is a popular spot for northern lights viewing, as the Canadian territory has a small population meaning less city lights to distract from the skies, and plenty of wide open spaces perfect for star gazing. 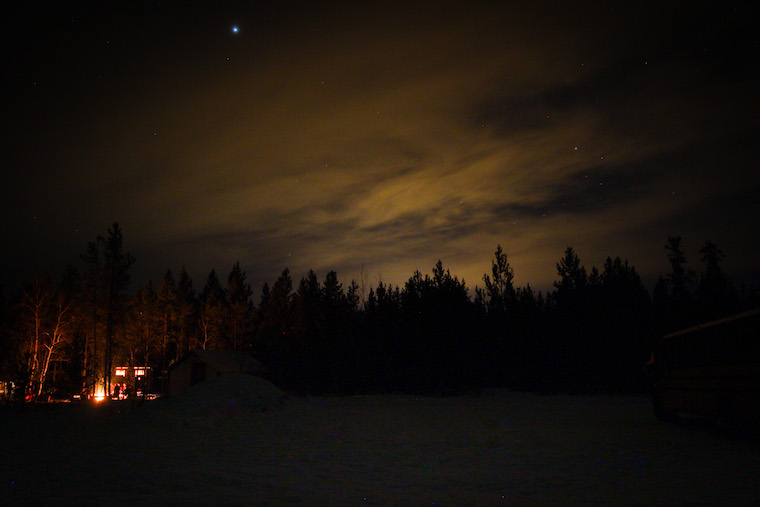 Getting a glimpse of the sky’s show can be as simple as looking out the window—that is, if you happen to be extremely lucky and are also staying in an igloo in the middle of nowhere (which I hope is still a thing, because that would be awesome). For the rest of us, a better bet is to book a northern lights excursion with a tour operator from Whitehorse, such as Northern Tales.

Our group was picked up from the hotel around 9:30 p.m., and were driven about half an hour outside of the city before arriving at the most charming setup. A roaring bonfire greeted us, which was surrounded by a number of rustic log cabins warmed with wood-burning stoves. Cushion-covered benches lined the interior providing respite from the chill outside, and snacks such as hot chocolate, coffee, tea and cookies were spread out to keep hunger (and exhaustion) at bay. 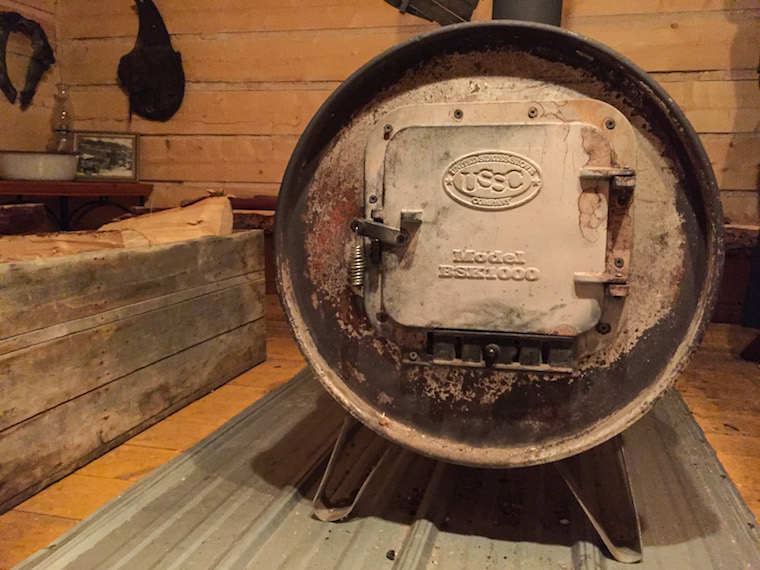 Based on the weather forecast our guides didn’t anticipate the aurora appearing for at least a couple more hours, which gave us time to relax in the cozy cabins, trade stories around the campfire (while eating s’mores, naturally) and most importantly get our camera gear set up. 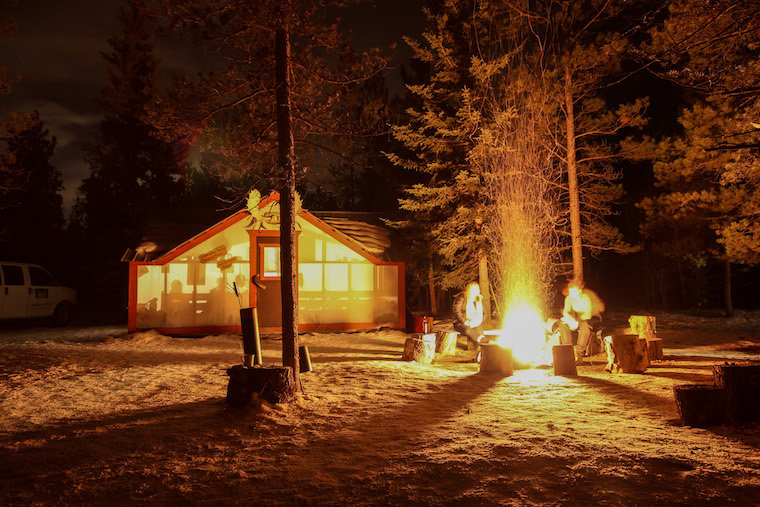 Here’s lesson number two of aurora viewing: you actually need know how to use your camera. If you were hoping to Snapchat the experience live to your throngs of online fans you’re going to be sorely disappointed, as you need to be able to manually adjust the focus, ISO, shutter speed and aperture on your camera to capture the colours. So long, not-so-smart smartphone. Since I’m still one of those people who shoots everything in automatic mode (hey I’m trying, guys!) I’m not going to get into the whole business of camera settings with you here. Instead, check out this great guide from the fab Jennifer over at Luxe Adventure Traveler.

I brought along my own tripod which is essential for photographing the aurora borealis, but Northern Tales also had many on hand to lend out. The guides then went around helping us get our settings in order (mine were at ISO 1600, f-stop 3.5 with a 30 second shutter speed, in case you’re into that sort of thing), and just like that, we were ready for the show!

It was already nearing midnight and with buses planning to depart around 2 a.m., our crew was starting to get a tad anxious that we’d be out of luck. Just two nights before, my pal Christy and I had stayed up way past bedtime and trundled out to the middle of frozen Marsh Lake in hopes of seeing the northern lights, but the only sort of excitement we had was when we nearly fell into a big, icy hole. So it goes without saying that we were extra eager to redeem ourselves, and come home with at least one good shot for our loyal Instagram fans.

Fortunately our friends at Northern Tales are very familiar with this type of scenario, and helped pass the time by demonstrating how to do light tricks. The camera was set up with a long exposure, then we would make crazy designs by quickly moving a light source around before hurrying out of the frame. How fun are these?! 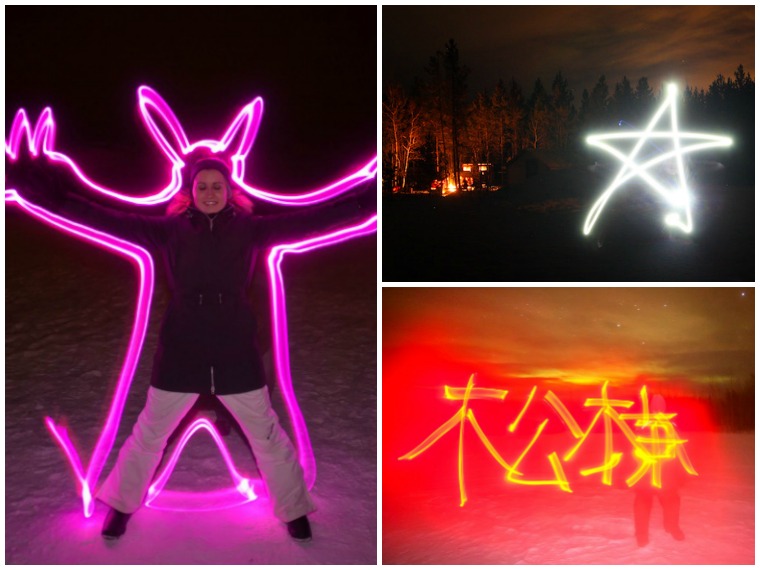 Suddenly, excited chatter pierced the night air and the feeling was electric—there was a green glow in the sky! It was tough to make out with our eyes, but sure enough once we hit the shutter on our cameras a faint neon hue appeared in the viewfinder. The northern lights were here! We spent the next half hour testing out different exposures as the sky grew brighter, then grabbed our tripods and raced over to a spot with a grove of trees in the foreground (tip #3: photos are better if you frame something in the foreground to give them perspective). We spent the next hour or so incessantly taking the same pictures, hoping that each one would come out more vibrant than the last. 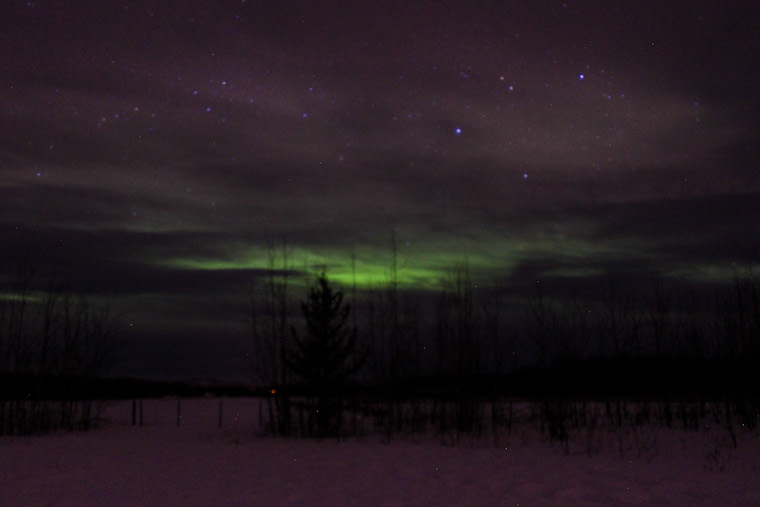 My “best” shot, which leaves much to be desired.

Unfortunately, this was not a night that would inspire the cover of National Geographic. While we counted our blessings that we would not be returning home empty-handed, the linear green glow bordered with a plum-purple skyline didn’t quite provide the majestic scene we were hoping for, and completely disappeared in less than an hour.

Was the night a failure? Absolutely not! We can still cross “See the Northern Lights” off our bucket lists, plus even the most skeptical of our group were totally charmed by the cabins and bonfires where we wiled away the hours waiting for the aurora borealis to appear. It just means we all get to come back another day, and hope that this time Mother Nature is on our side.

When to go: The optimal time for viewing the northern lights is from August to April, when the skies are darkest.

Get the app: Before heading north, download an app like Aurora Forecast which can identify prime time for viewings, based on your location.