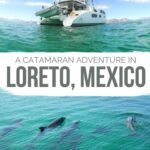 It seemed fitting that we were talking about how Flipper had a stunt double, just as a dolphin burst out of the water before our eyes.

The sunshine reflected off its smooth back, catching rays of light above the glistening bay. It jumped so high I didn’t know whether to shriek or laugh in delight, so I did a garbled mix of both, alerting my fellow boat passengers to the spectacle unfolding in front of us. The dolphin effortlessly slipped back into the water just as quickly as it’d appeared, then sprung out again, giving everyone who’d missed the first show a chance to experience the same awe-inspiring thrill. 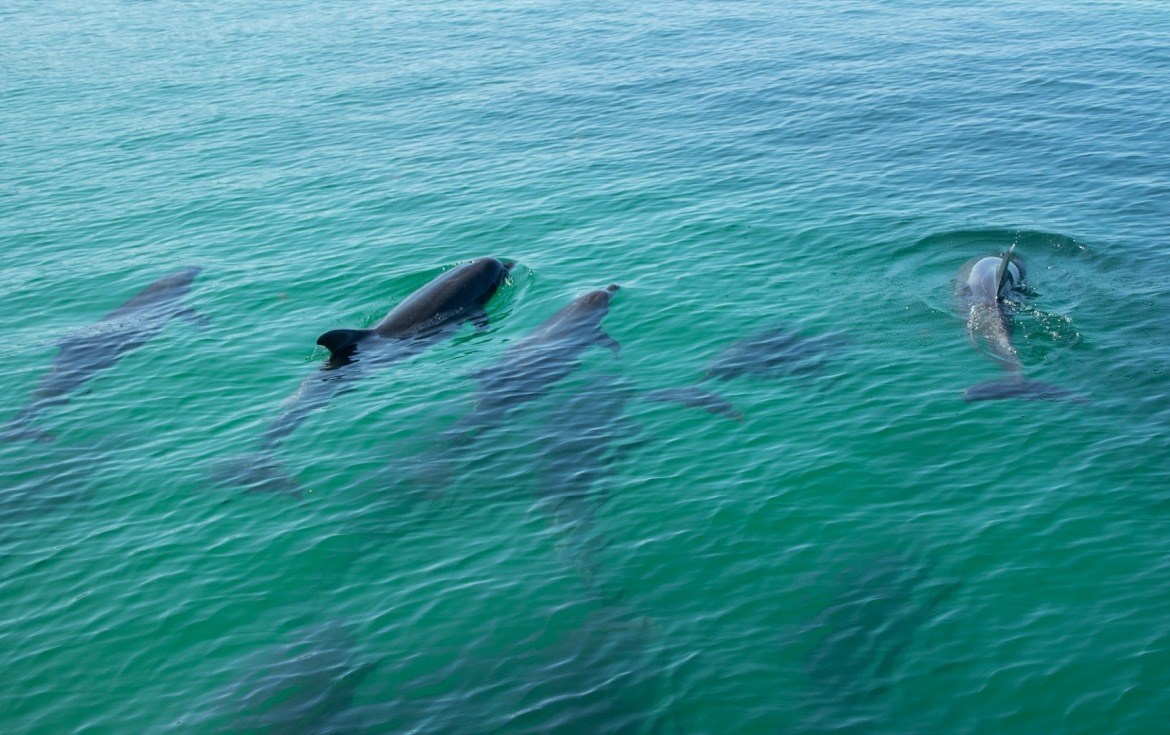 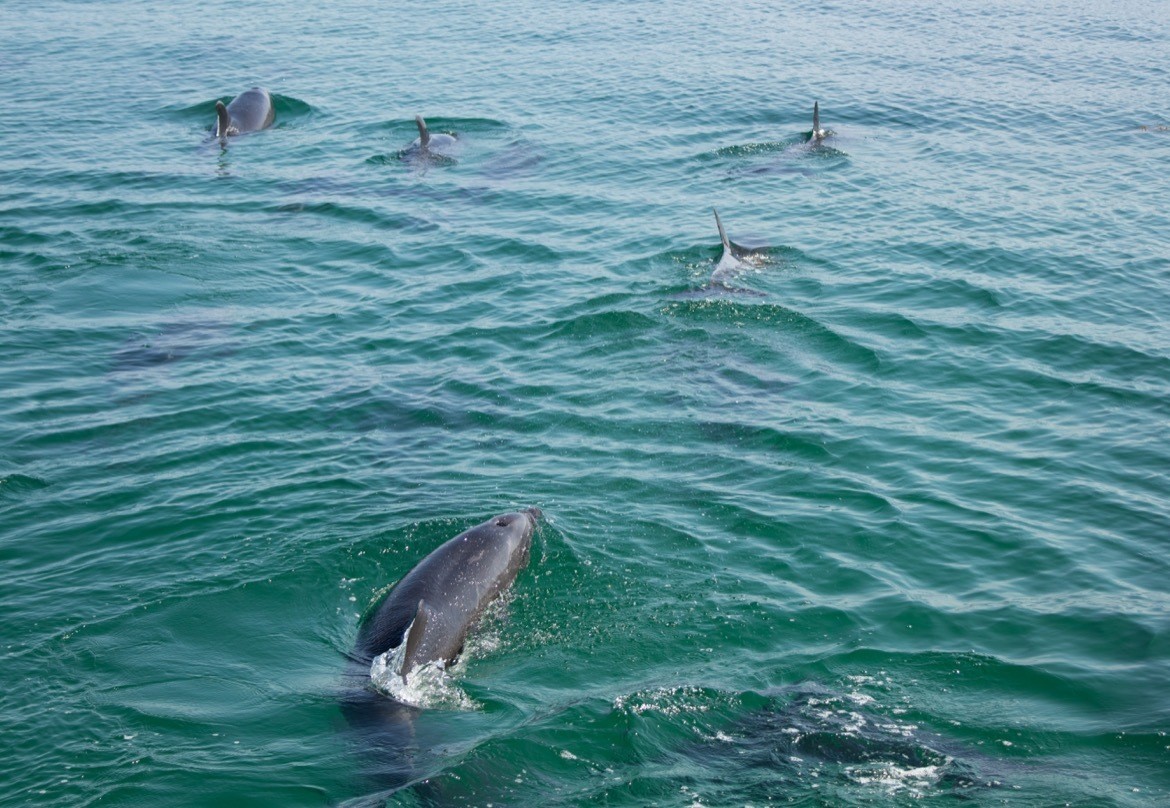 This encounter was just one of countless highlights of our overnight catamaran adventure into Parque Nacional Bahia de Loreto, a UNESCO-protected reserve known for its blonde beaches, volcanic islands and incredible marine life.

The islands of Loreto

Also referred to as Bahía de Loreto National Park or Loreto Bay National Marine Park, Parque Nacional Bahia de Loreto is on the east coast of Baja California Sur. The area includes the Sea of Cortez and Bay of Loreto in the Gulf of California, and the five uninhabited islands of Loreto that are popular with day-trippers: Isla Santa Catalina, Isla Montserrat, Isla del Carmen, Isla Coronados and Isla Danzante. 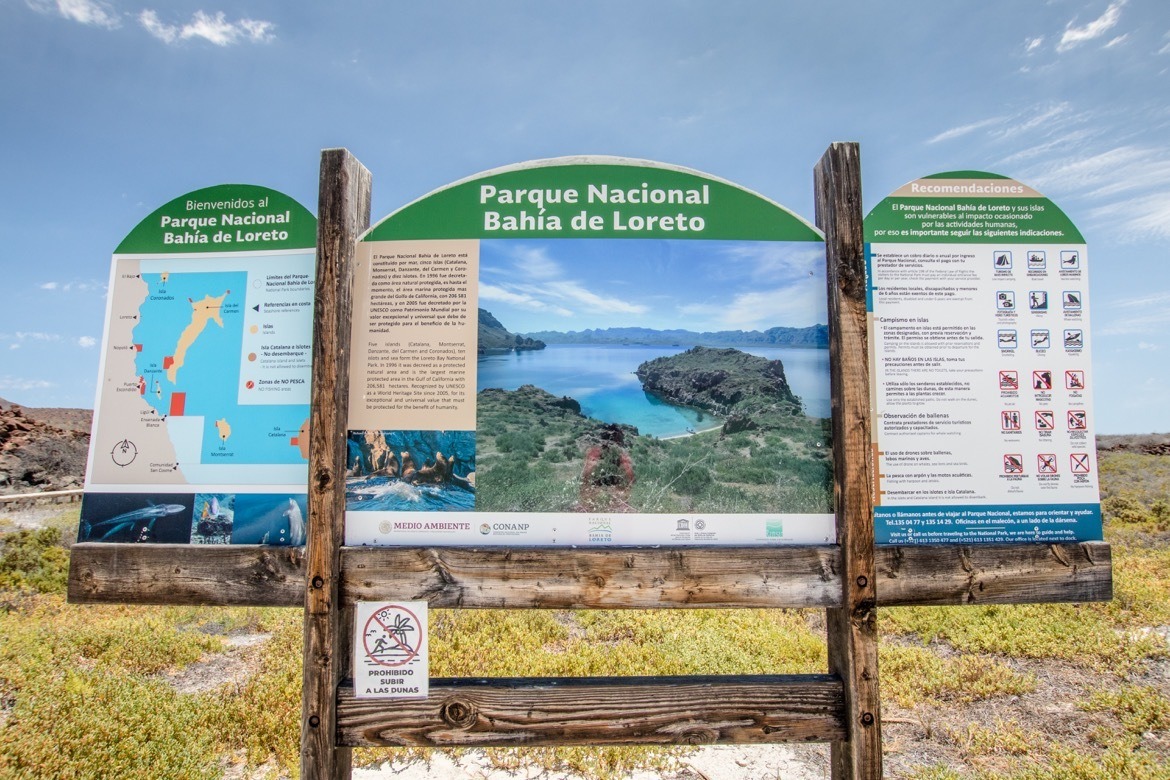 Rare birds can also be spotted, including the blue-footed boobies who are best known for their mating dance that sees the males show off their vibrant feet to prospective partners with a rather comical strut, while flapping their wings and shrieking. 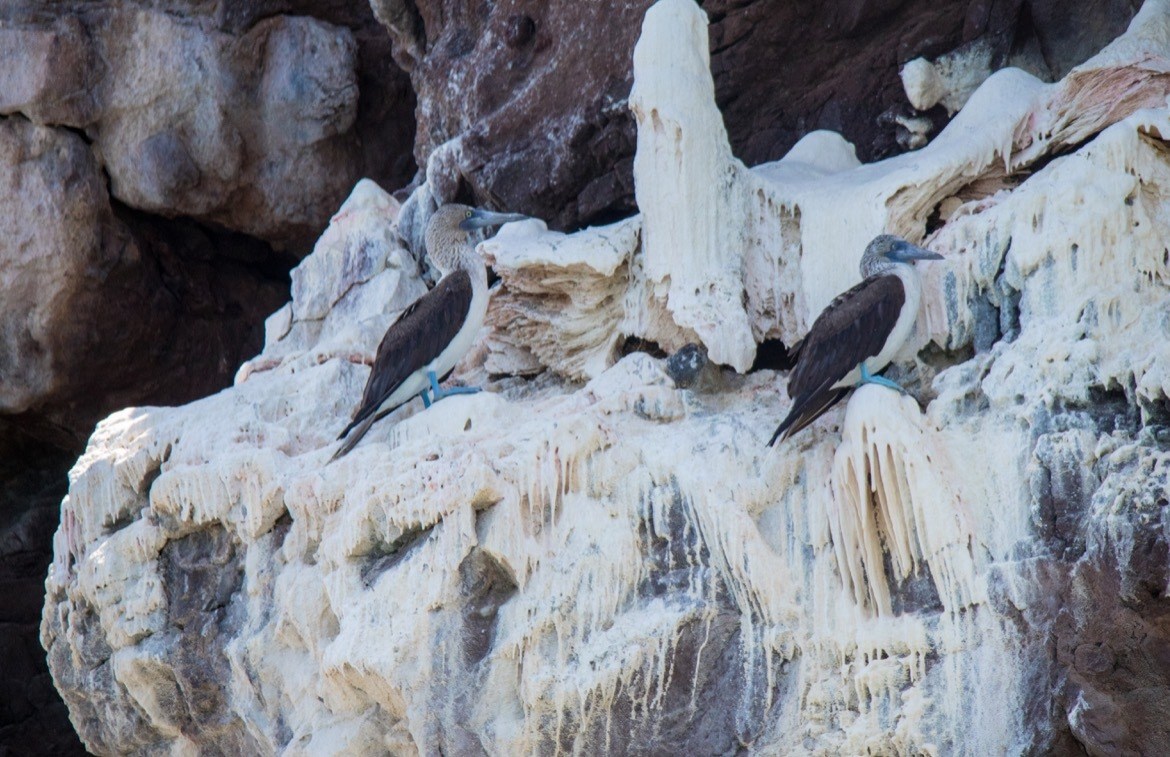 The only way to get to the islands is by chartering a boat, and sailing trips depart from the marinas in either Loreto or Puerto Escondido. Panga rentals cost about $120-$150 USD for the day, fit up to six people, and are one of the best things to do in Loreto.

While most are content with an afternoon outing or sunset cruise, an unforgettable way to see the reserve is with a multi-day catamaran tour like the ones operated by ABT Sailing. 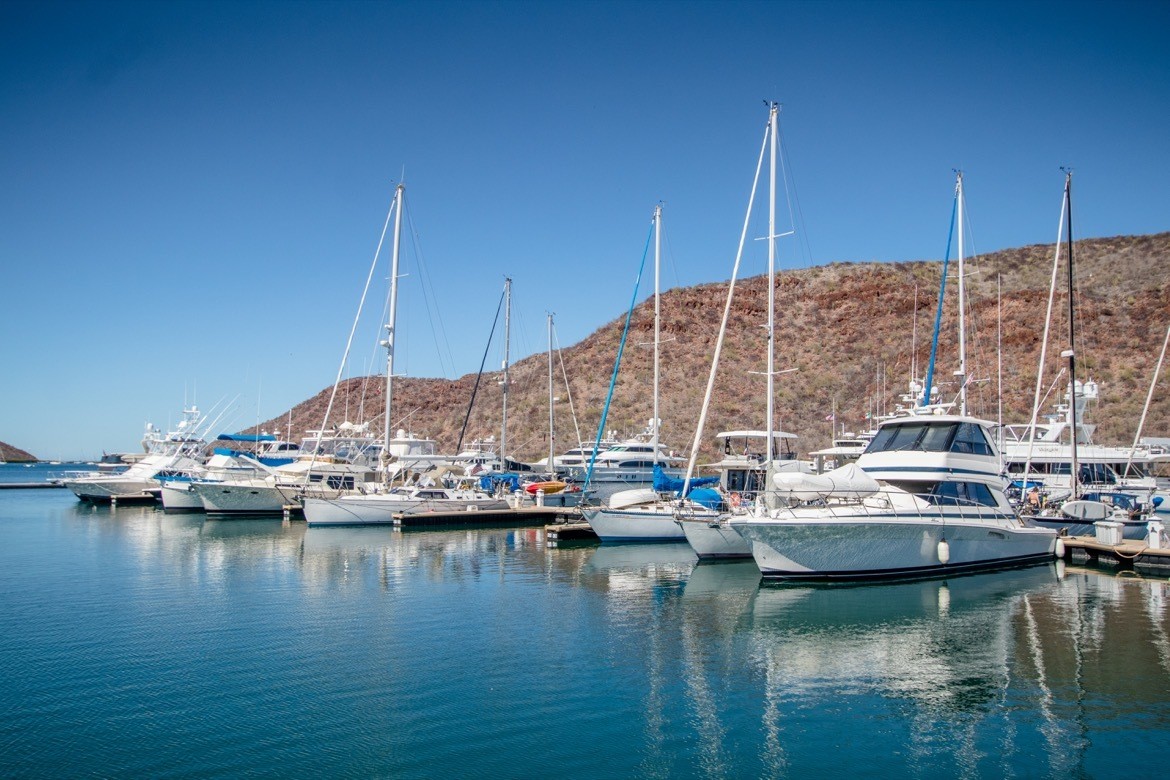 The marina in Puerto Escondido

The Island Overnighter adventure is one of ABT Sailing’s premiere experiences, and costs $375 per person for the two-day, all-inclusive trip. It’s the same one our group of four was about to head off on, with plans to do some beach hopping and water sports at multiple islands.

We met our English-speaking crew in Puerto Escondido, and I was thrilled to see the gleaming Bel Gato sailing catamaran which would be our ride for the next couple of days. The well-appointed boat has four guest rooms with queen size beds, air conditioning and the luxury of ensuite bathrooms, a kitchen, and lounge areas both inside and out with plenty of space to socialize. 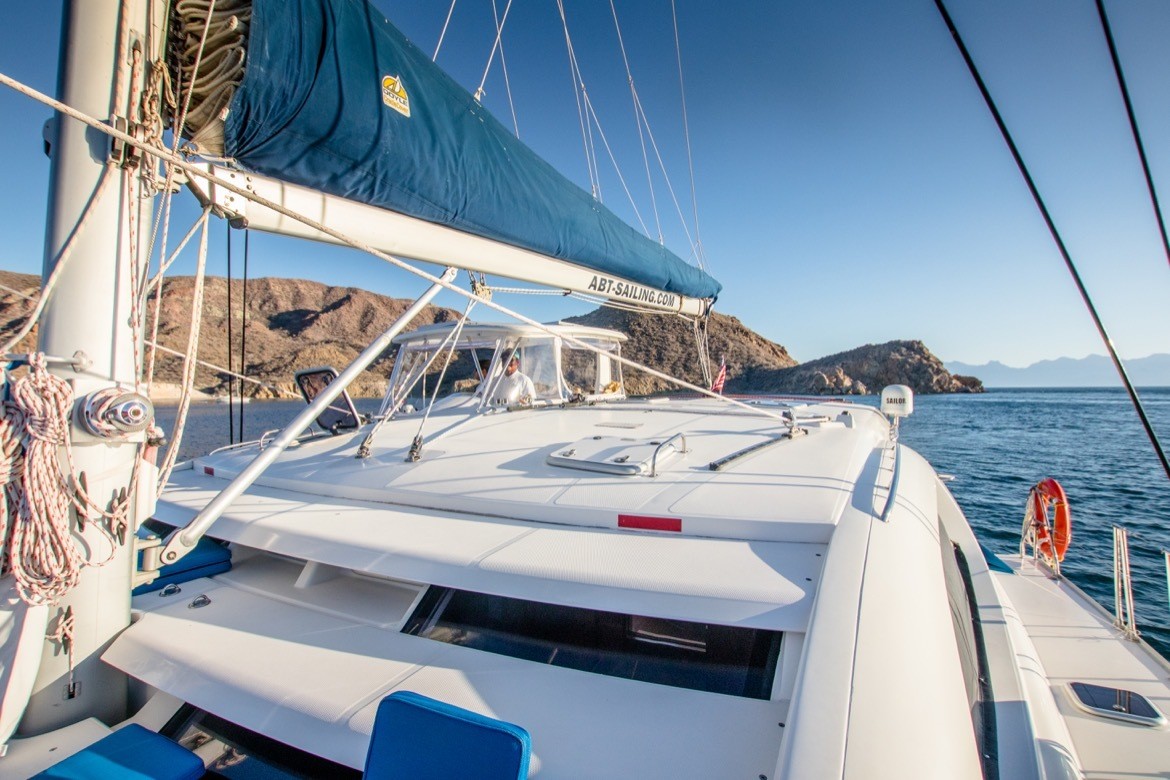 The service was incredible from the start, and before I could blink my bags had been whisked down into the hull and there was a tangy margarita in my hand. All snacks, meals and a fully-stocked bar are part of the package, with the crew whipping up everything from fresh ceviche to barbecued clams to boozy banana smoothies at a moment’s notice.

The Bel Gato is also outfitted with all the toys we’d need for aquatic adventures like kayaks, stand up paddleboards, snorkeling gear, fluffy beach towels and chairs, as well as a small motor boat for shuttling guests to the islands. 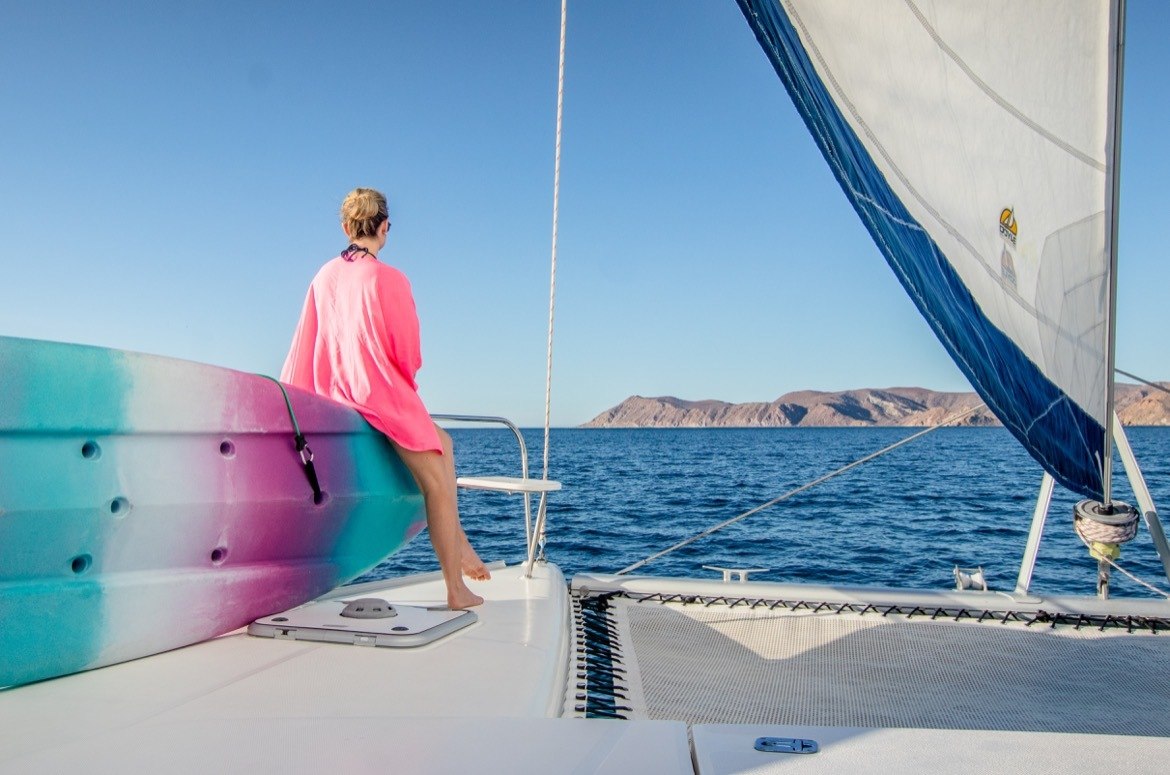 Aboard the Bel Gato

We soon set off, sailing past Isla Dazante which has an elevation of 1,050 feet and multi-coloured formations due to the volcanic activity that shaped it. 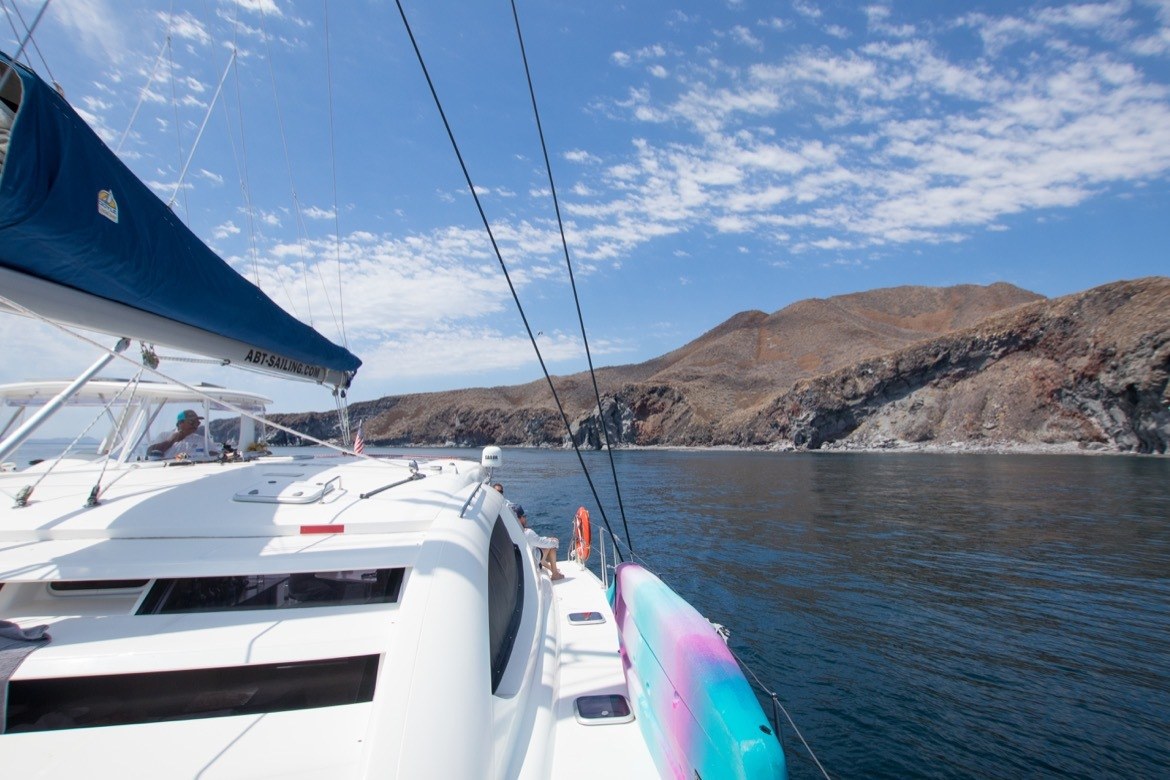 While the weather doesn’t always cooperate, ABT Sailing prefers to use wind power and sail when possible instead of running the engines, for an even more tranquil experience. I sprawled out on the trampoline-like mesh area at the bow, with the breeze tossing my hair as I became mesmerized by the view of the seemingly-endless horizon. 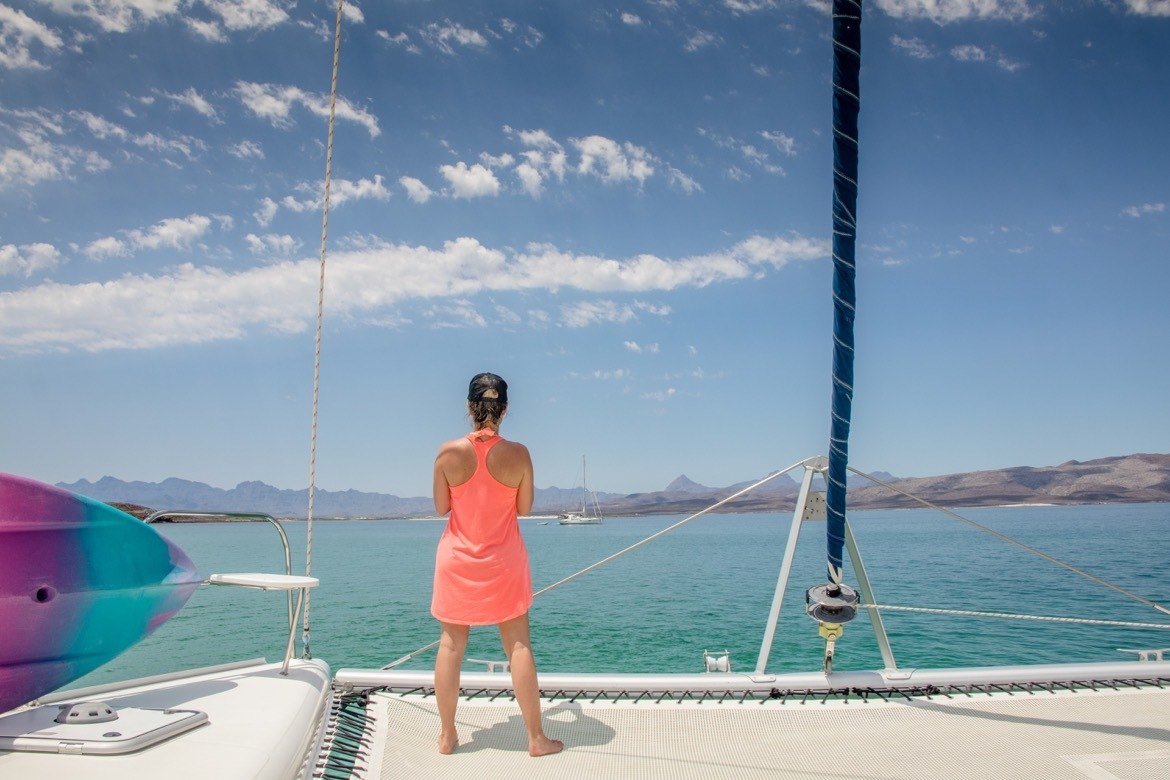 Our destination that evening was Isla Del Carmen, which is the largest of the islands and a popular destination in Loreto Bahia. Lucky for us, the golden hour was upon us and the groups had long since returned to the mainland, leaving behind just a smattering of small yachts as we pulled into a sheltered bay and dropped anchor. 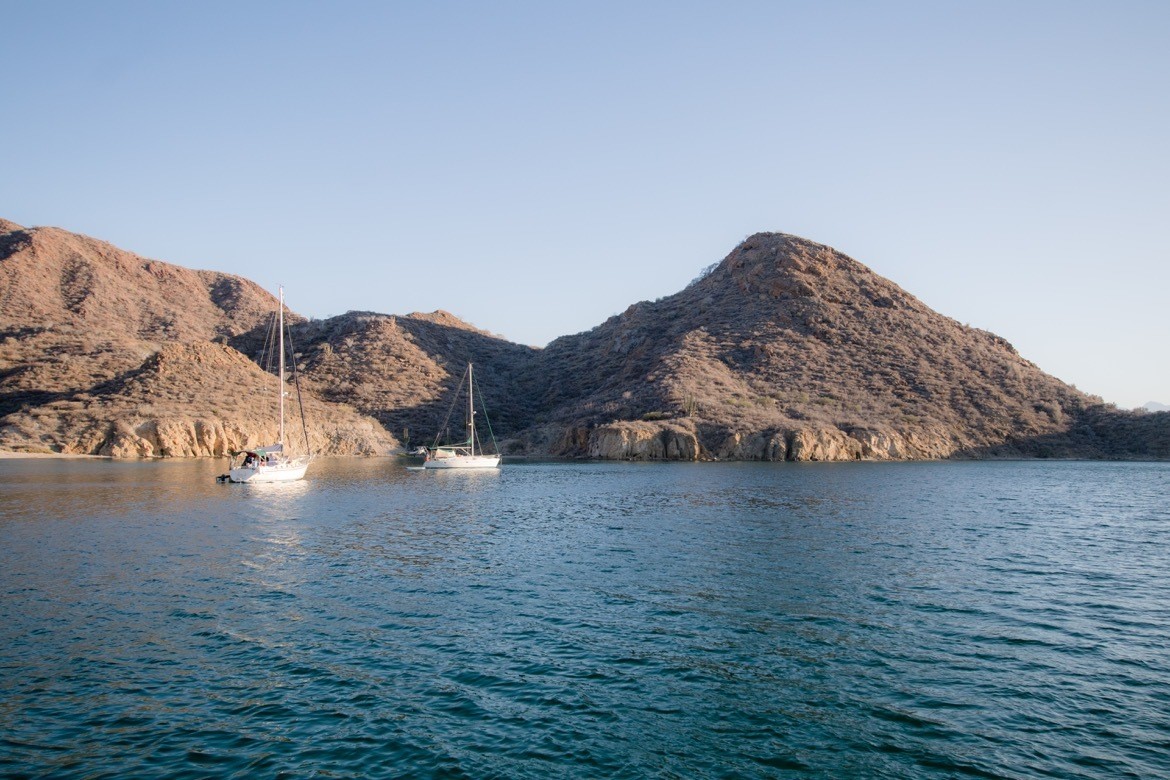 We cooled off with a quick swim and paddle before sunset, making it back up to the deck in time for sunset cocktails to kick off the night’s main event: a beach bonfire. 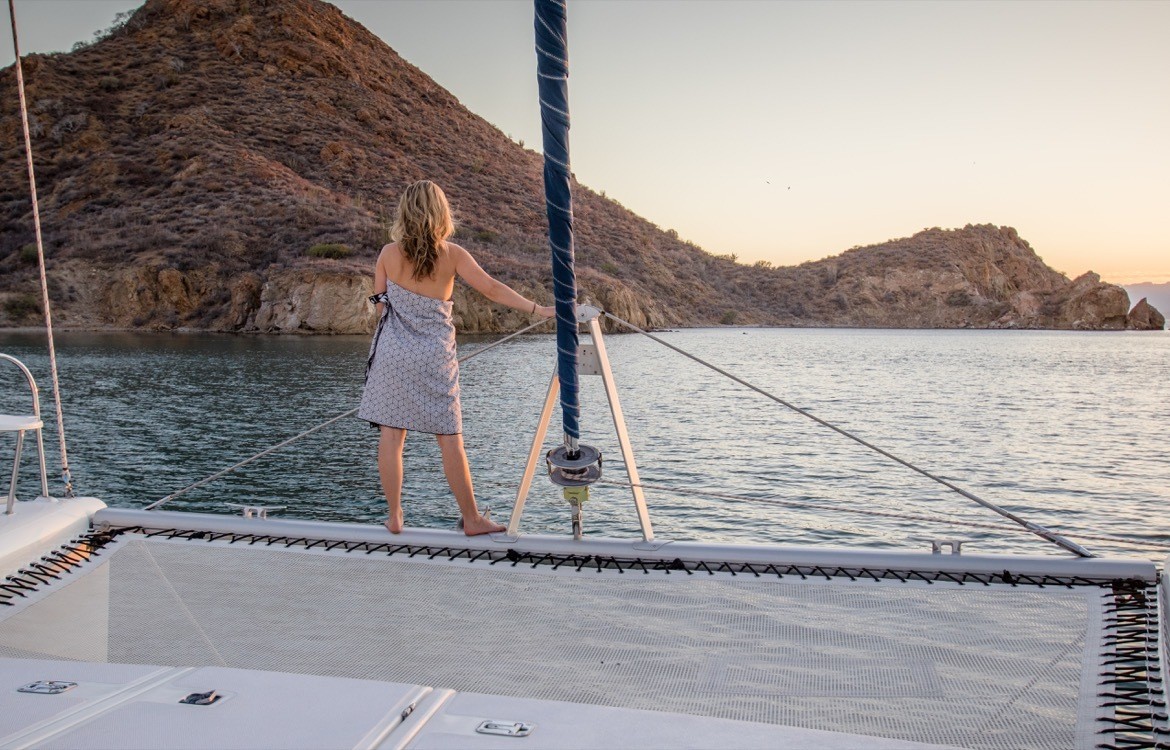 While we’d been splashing around, the ABT crew had set up an entire party for us on the shore, complete with music, white tents, a BBQ, chairs, bar and fire pit. A motorboat whisked us over, and as darkness fell we drank wine, dined on fresh fish and toasted s’mores, enjoying every second of this private campout.

Hours passed, and we eventually made our way back to the catamaran, trailing our fingers in the water to create a bioluminescence as the sky above us was illuminated by a galaxy of stars. 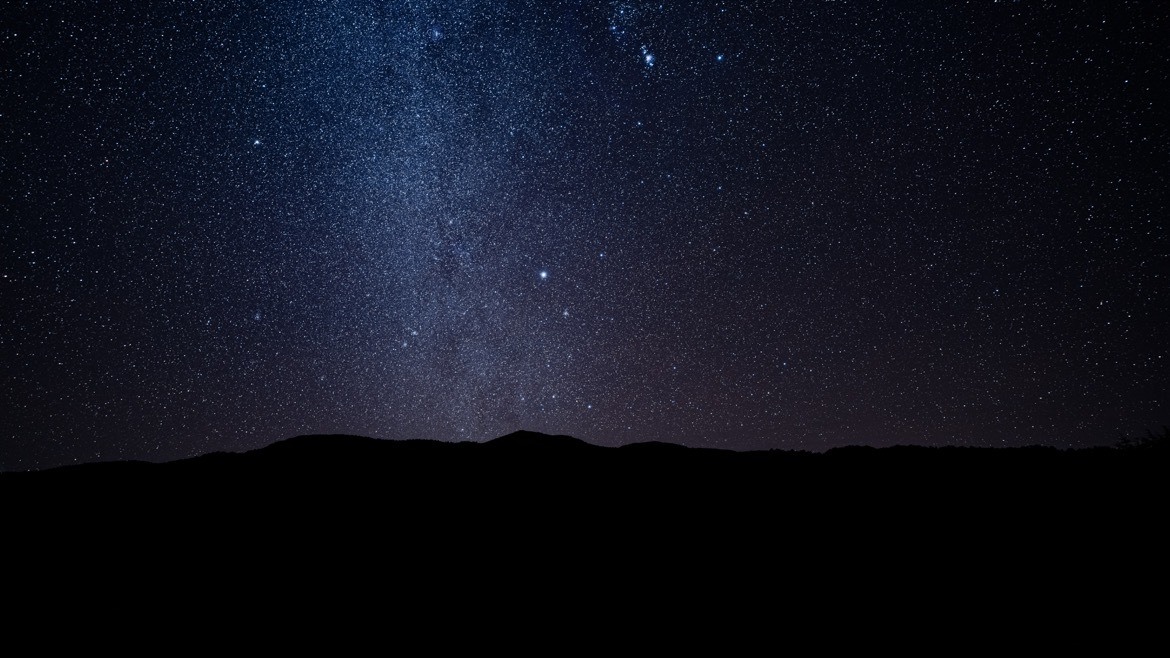 The next morning, a fiery pink sunrise marked the start of a new day. Fresh coffee, fruit and pastries awaited us as we wiped the slumber from our eyes, making our way up to the salon for breakfast. The turquoise bay was still, with few sounds aside from a couple of pelicans flapping their giant wings as they skimmed the water’s surface, fishing for their own breakfast.

Plenty of play time was on the day’s agenda, starting with a morning dip in Carmen Island’s pristine waters before setting sail to nearby Isla Coronados. 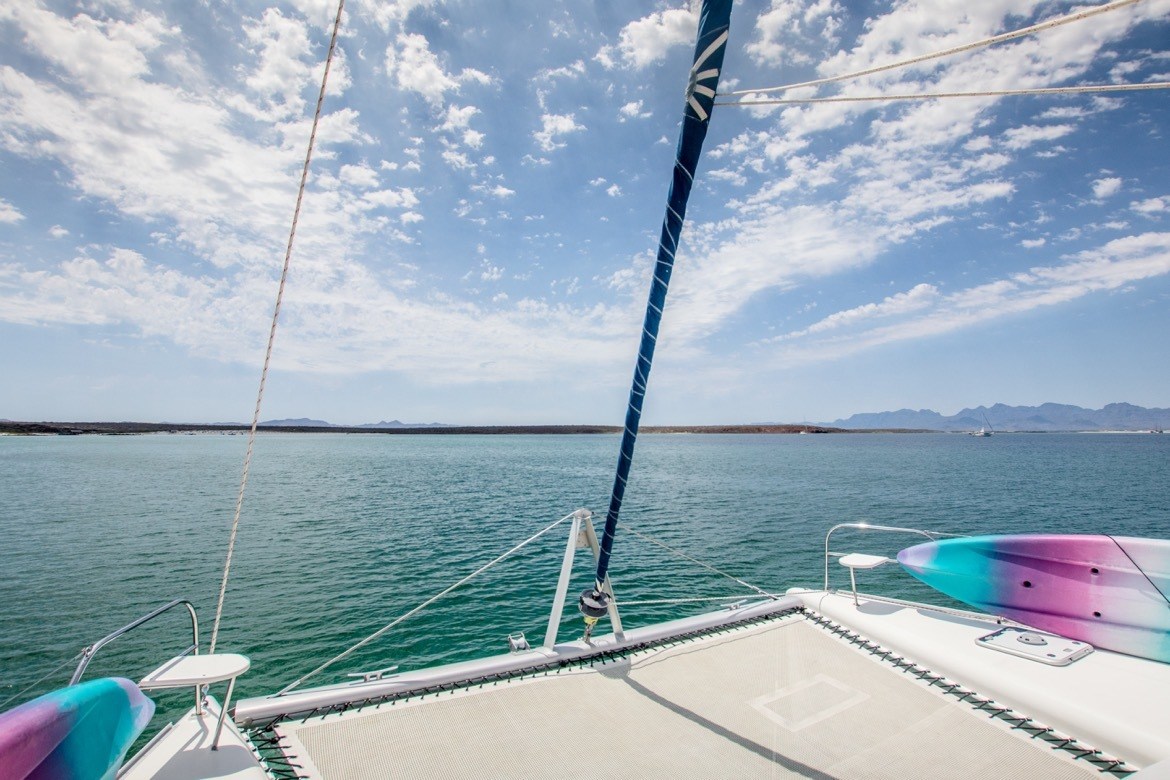 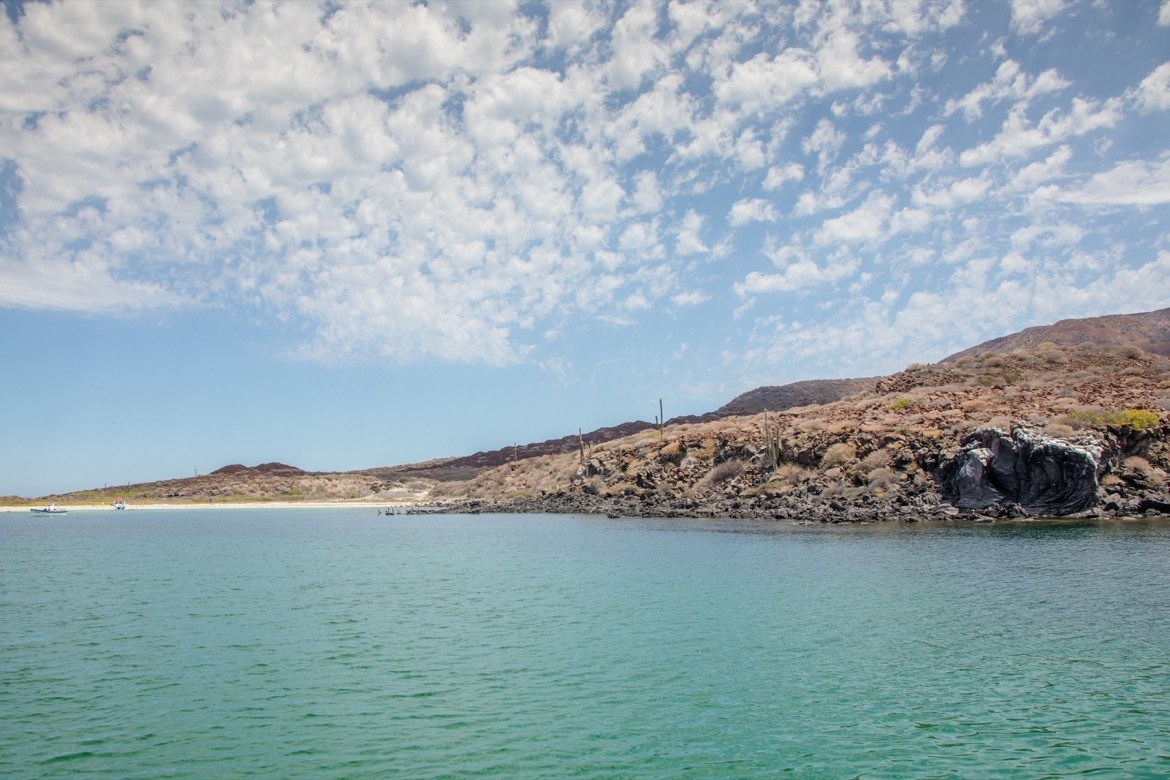 En route we paid a visit to a colony of sea lions, who we could hear and smell long before seeing them. Playful pups plopped around the shoreline, while their elders lay out in the sun and barked warnings as our boat bobbed nearby. Guests are welcome to hop in the water and snorkel with them, or kayak around the rocks to get a closer look at the lumbering creatures. 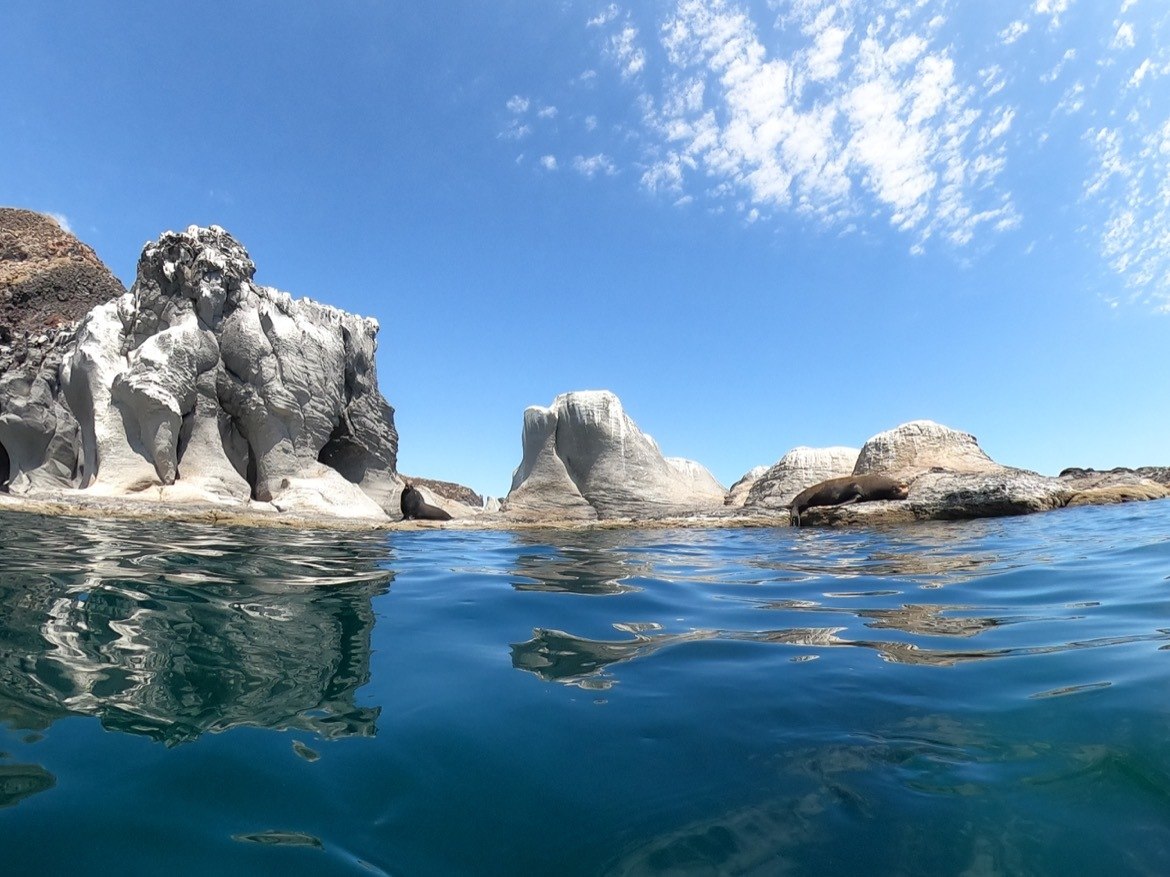 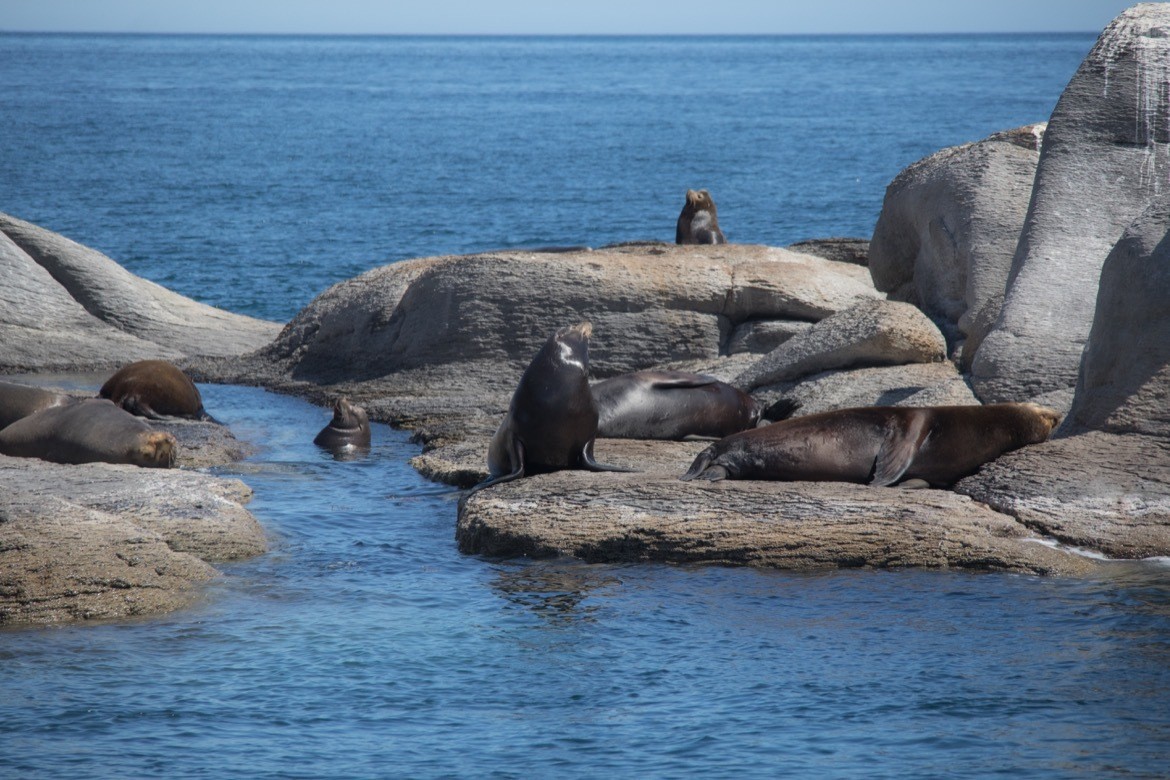 An afternoon of beach hopping was up next, and as we made our way to the dazzling shores of Ensenada Blanca we passed the aptly-named Monkey Face rock and spotted a crew of blue-footed boobies perched on the cliffside. 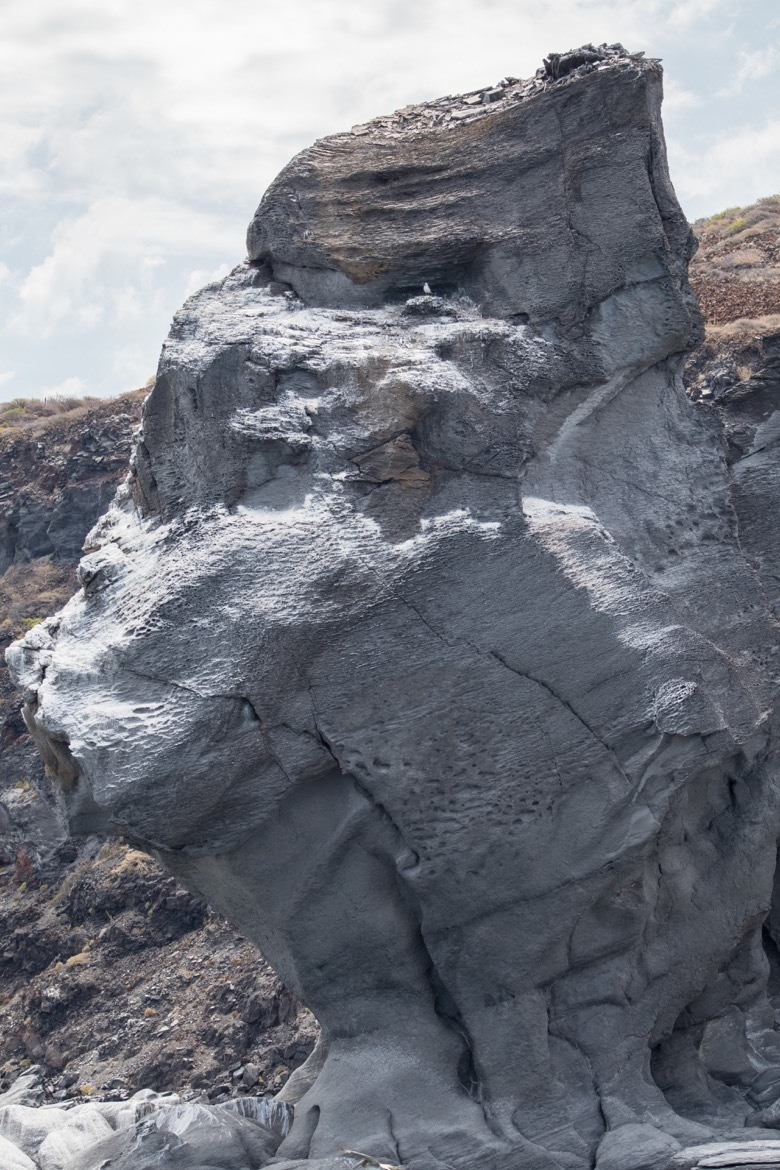 Since the Bel Gato is quite large, she’s anchored out in the bay and guests can take a boat ride, swim, kayak or paddleboard to shore. I opted for the panga which we’d fondly nicknamed the ‘Mexican Uber’, and in no time at all we found ourselves soaking up the sun on a prime stretch of the beach, with a cooler of ice cold cervezas within reach. 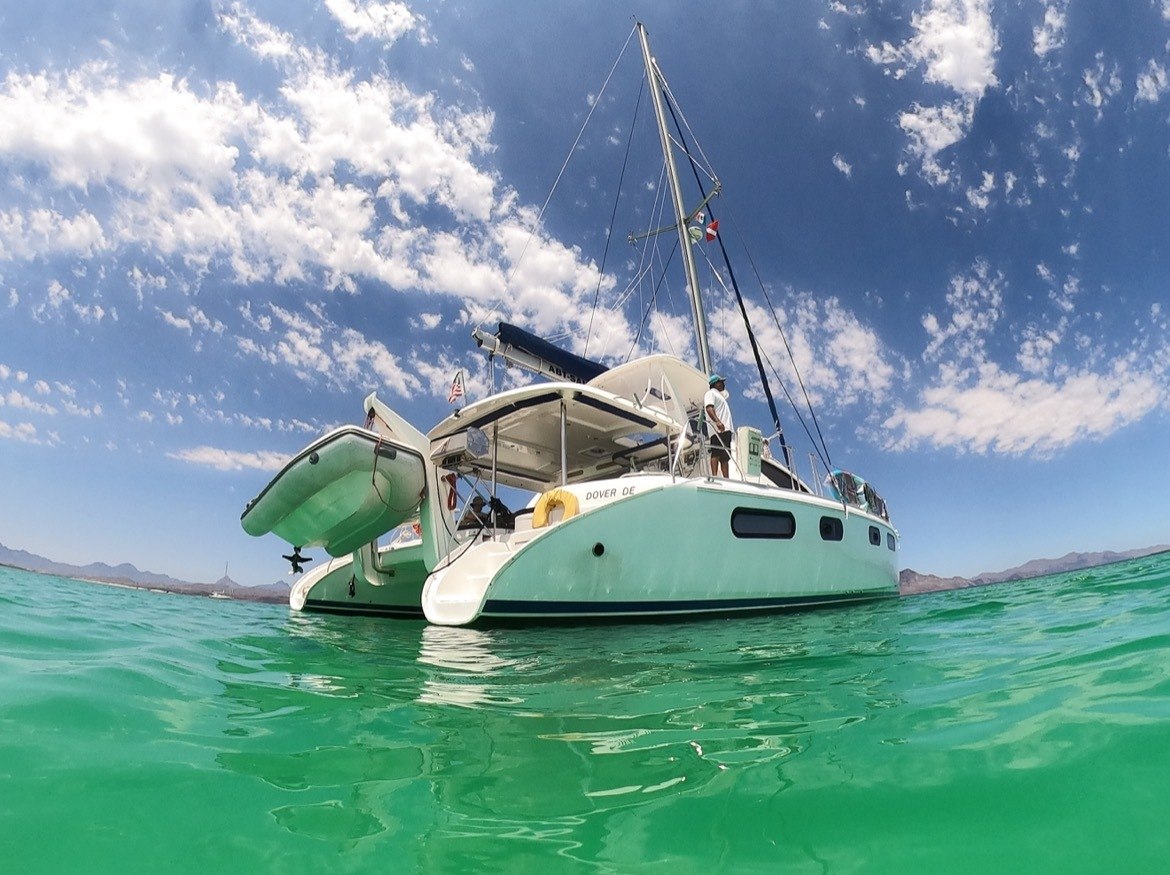 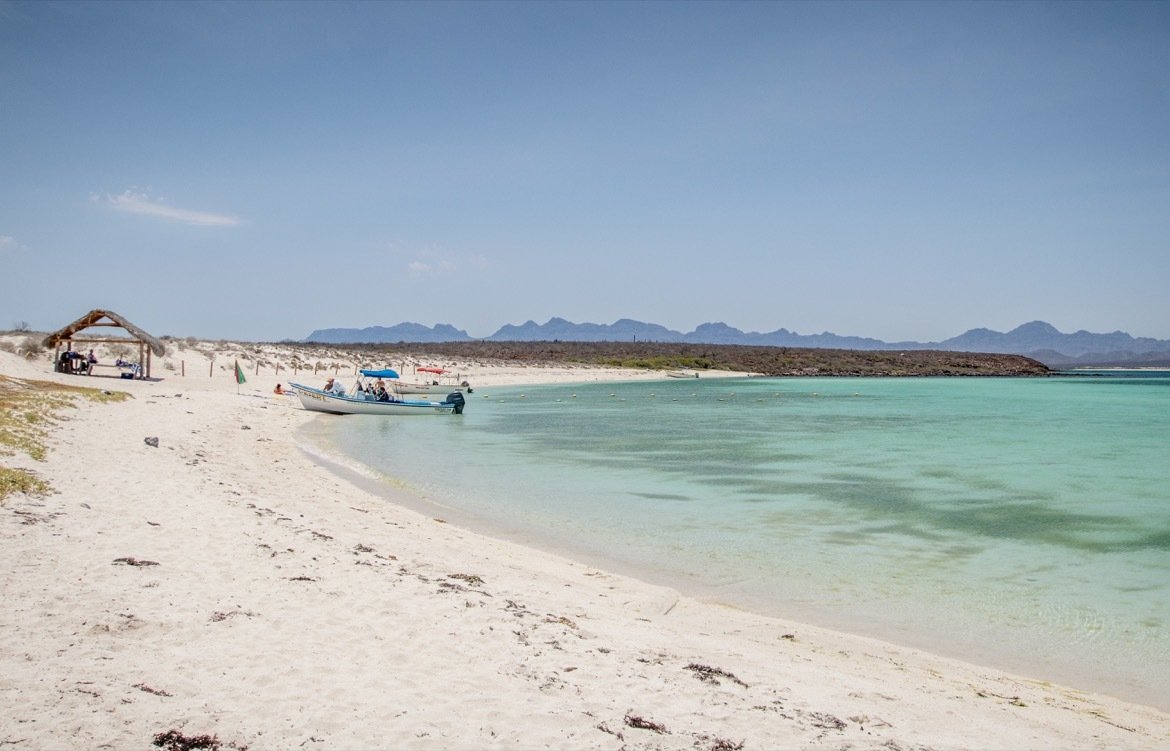 There are four trails on Isla Coronado, including one that goes up to a volcano and has fabulous views of Parque Nacional Bahia de Loreto. However, they’re best done early in the morning to avoid the unrelenting midday heat, and hiking boots are recommended as the volcanic stones can be sharp. 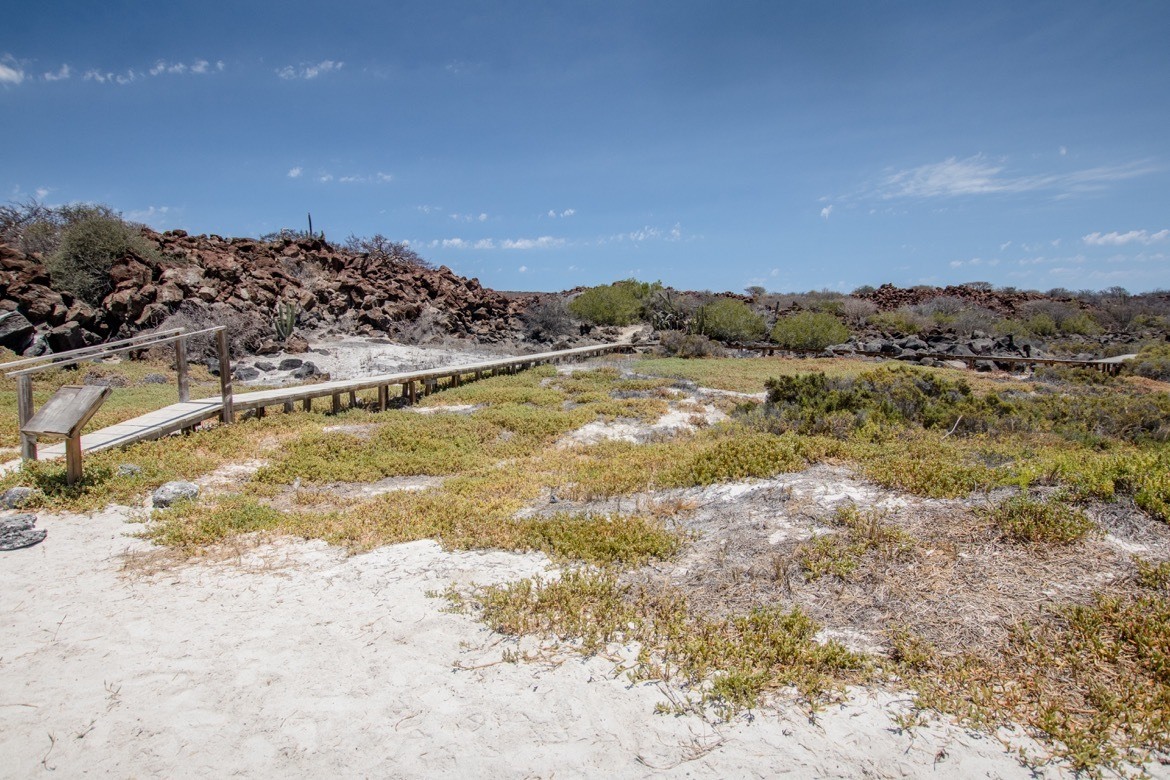 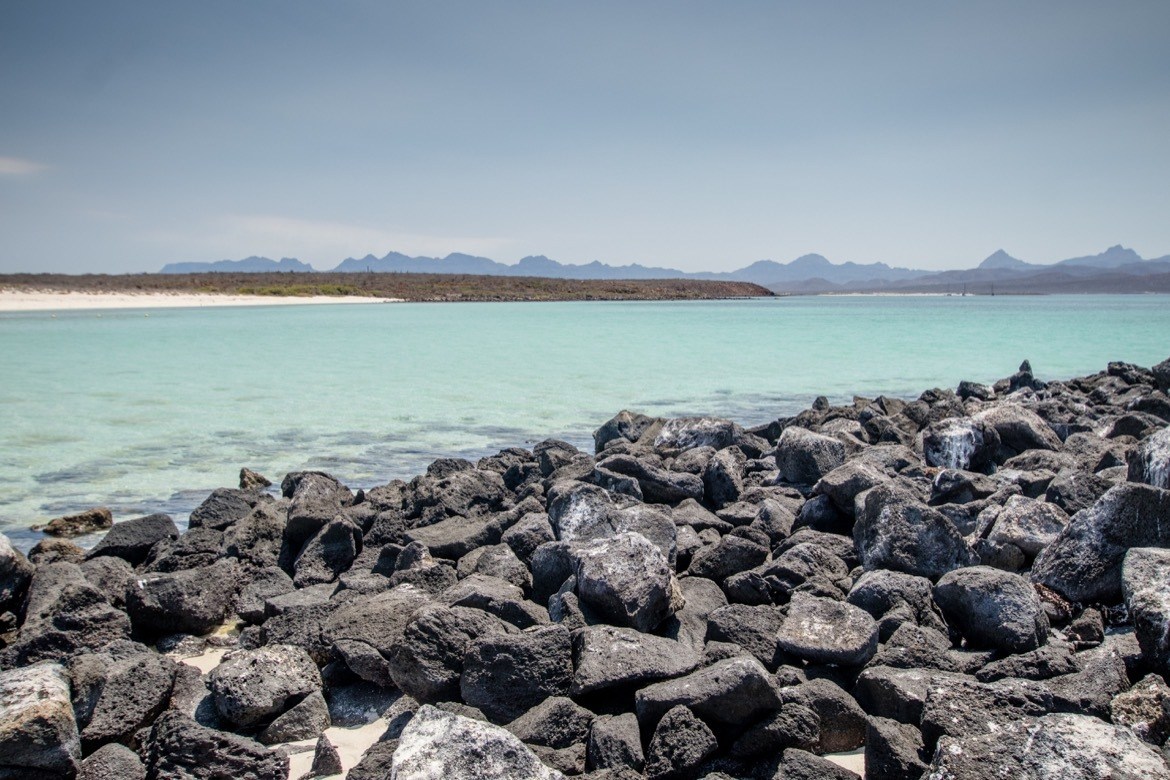 Our leisurely afternoon was what vacations are made of: calm, clear water, sparkling sand, good books and naps under thatched palapas. Another surprise was in store during the ride back to the catamaran, when a huge school of manta rays joined in the fun, slowly gliding just a few feet under our panga. 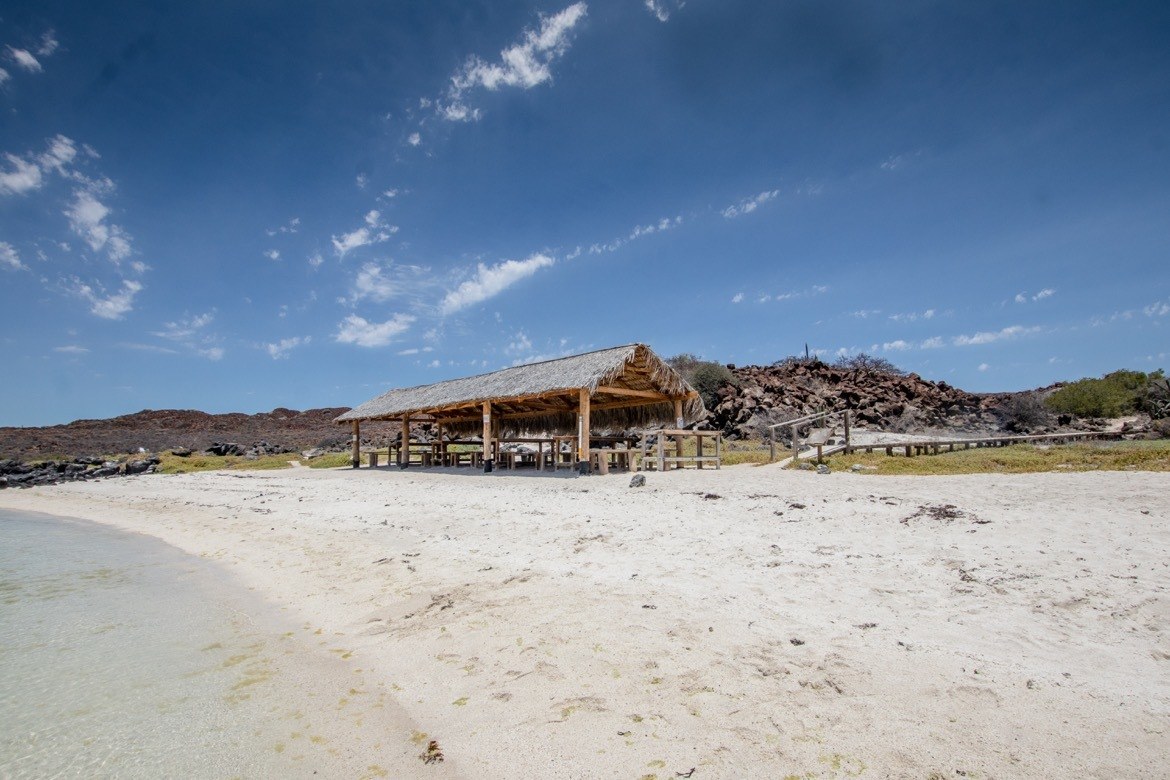 With happy hour waiting for us back in Loreto, it was time to set sail for the mainland–and fortunately, the excitement wasn’t over yet. As the coastal city came into view, dark shapes emerged from the water and our captain quickly cut the engine and called out ‘delfín!’ to alert us to the presence of a pod of bottlenose dolphins. 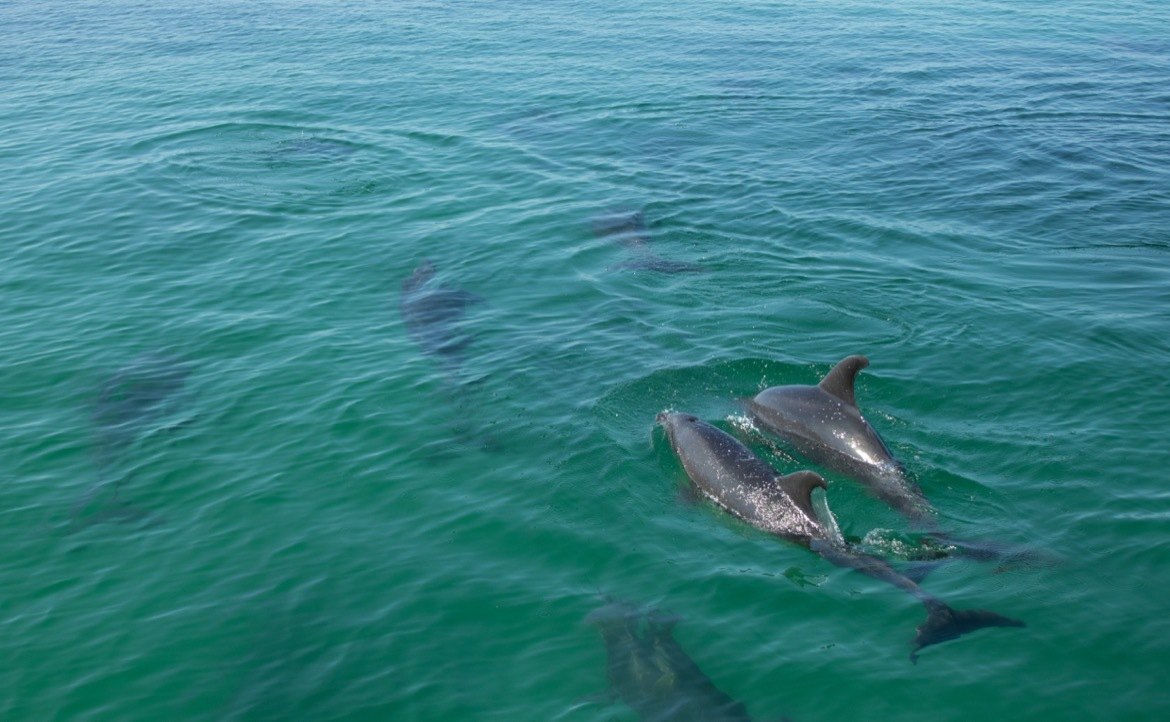 Nearly a dozen of them dipped in and out, chattering to each other before slipping back in the azure waters, only to pop up seconds later in a completely different spot which had us racing around the boat’s deck to get the best view. They played around the hull and showed off their acrobatic skills with huge leaps, the show going on for more than 45 minutes before we’d finally had our fill and continued for the final few minutes to the marina.

The dolphins swam alongside us most of the way, bringing an incredible end to our catamaran adventure through Parque Nacional Bahia de Loreto. 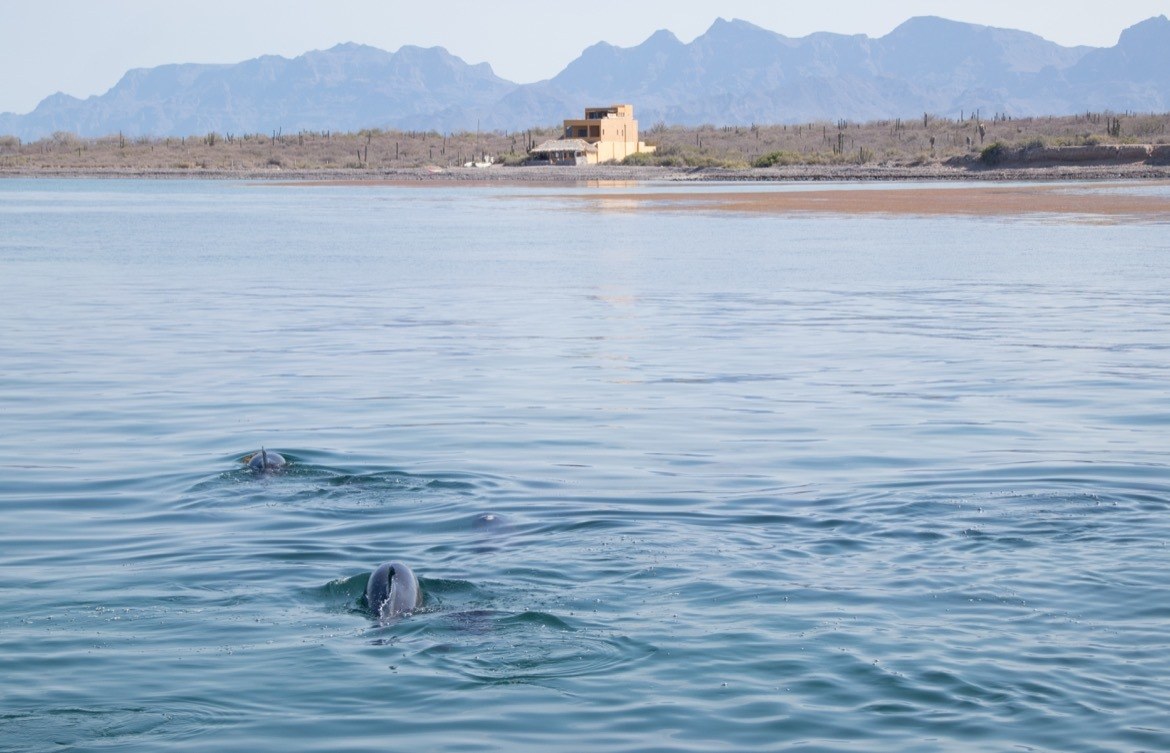 Globe Guide explored Parque Nacional Bahia de Loreto as a guest of ABT Sailing and Visit Baja California Sur. As always, hosts have no editorial influence on articles. 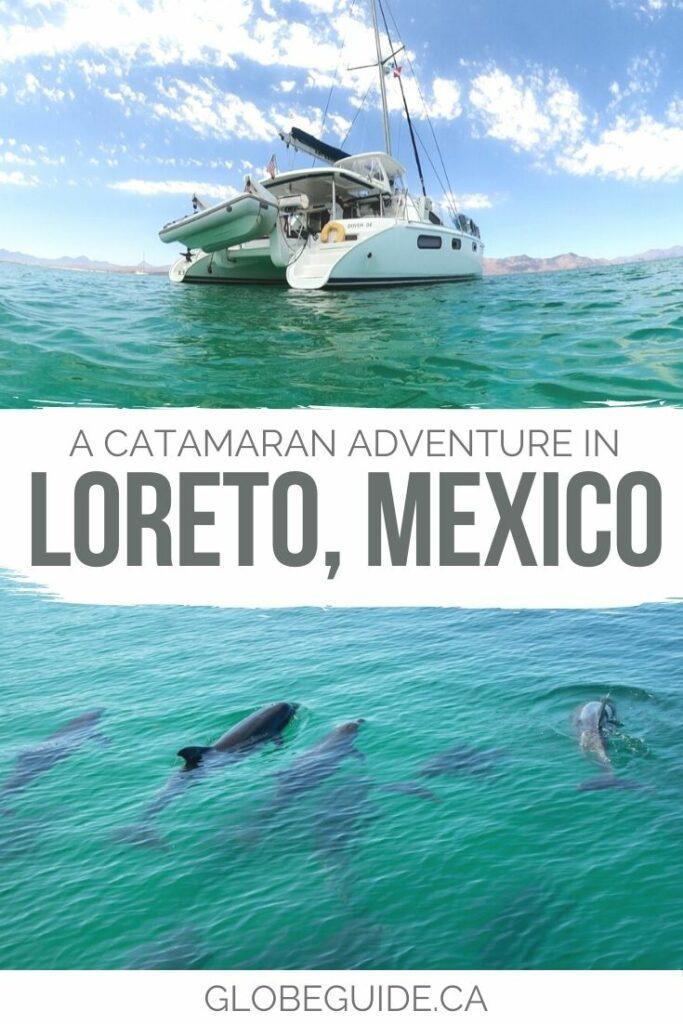 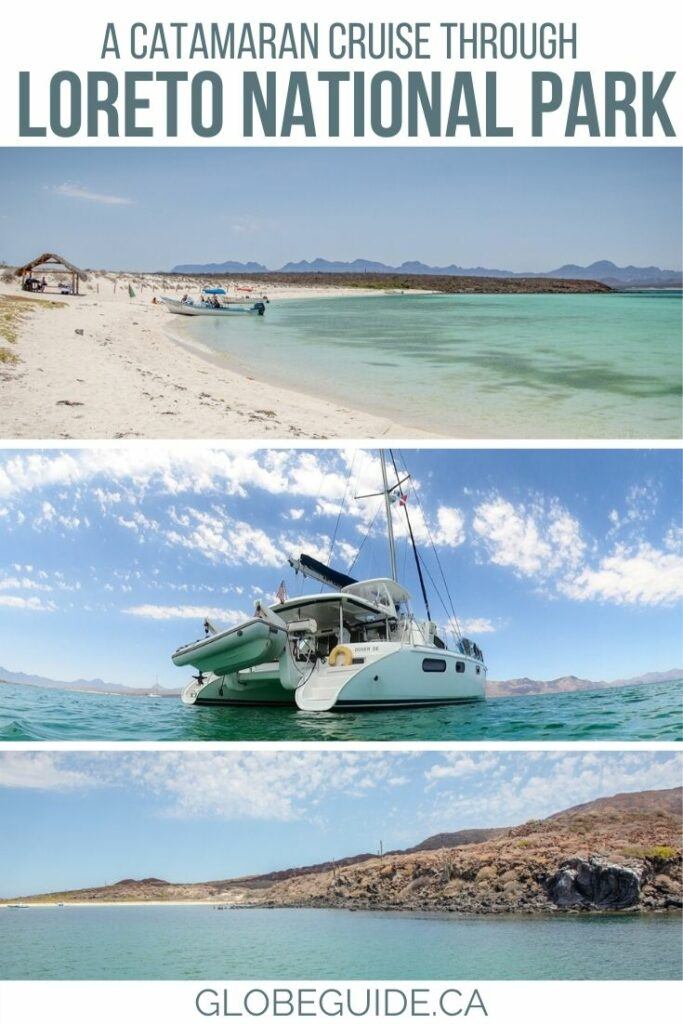 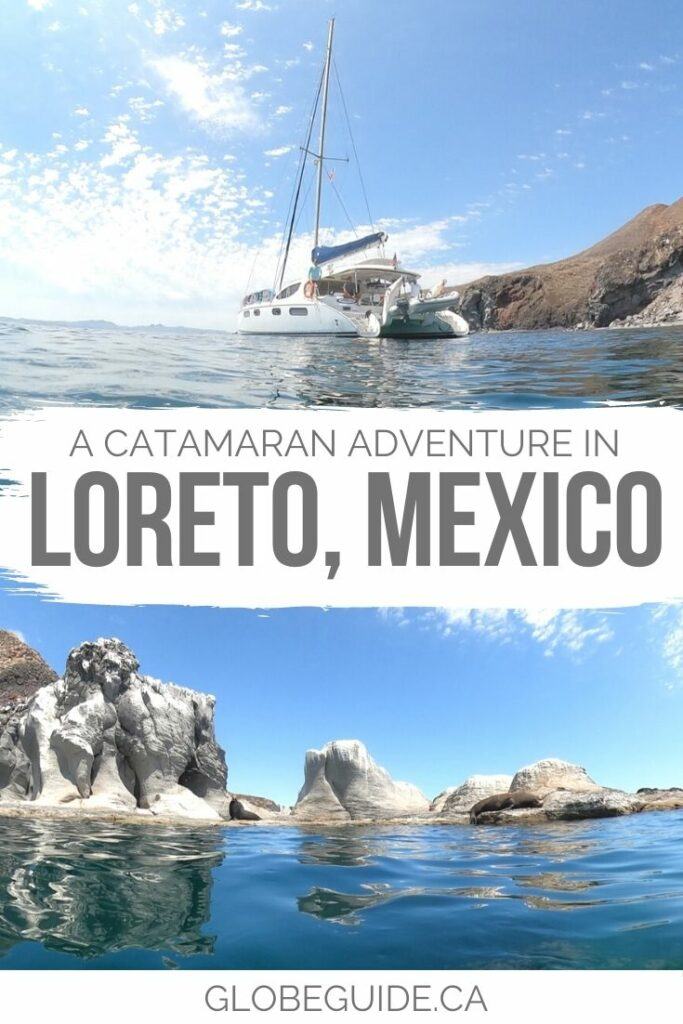