Relax to the max at Thermëa spa in Winnipeg, Manitoba 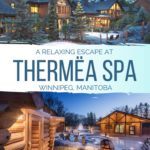 The bright light of the full moon illuminated the thick steam coming off the pools. The fir trees were covered in snow so thick it looked like they’d been frosted with icing.

There was a stillness in the quiet night air, save for the scattered whispers of spa-goers as they slipped between pools, bundled up in oversize robes to ward off winter’s chill before plunging back into a hot tub or disappearing into a steaming sauna. 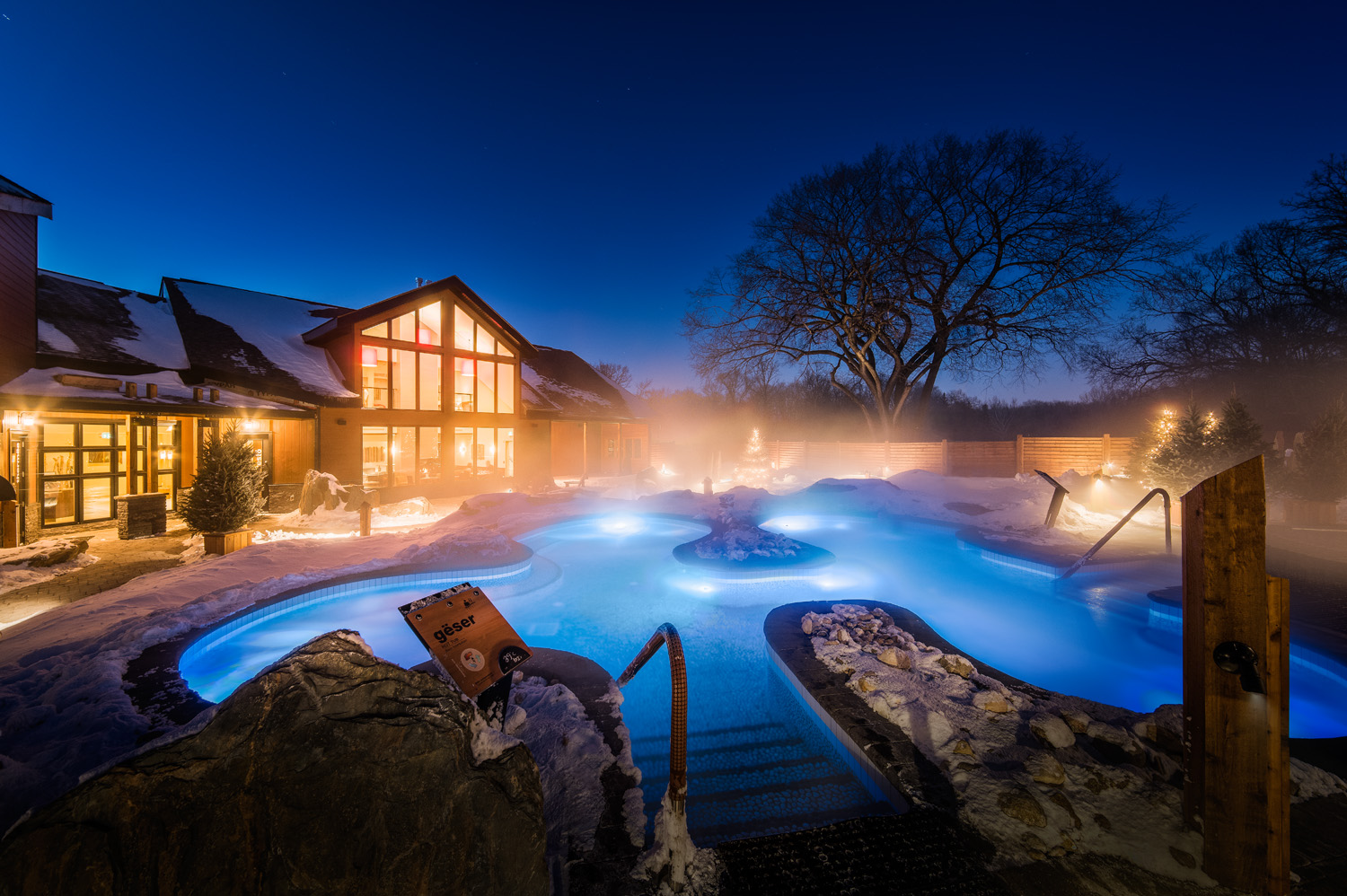 I’d arrived at the renowned Thermëa spa in Winnipeg just minutes earlier, directly from the airport as I was determined to soak in every minute of what was sure to be a highlight of my trip to Manitoba’s capital city. As soon as I walked through the wooden doors into the retreat, I knew I’d made the right choice. 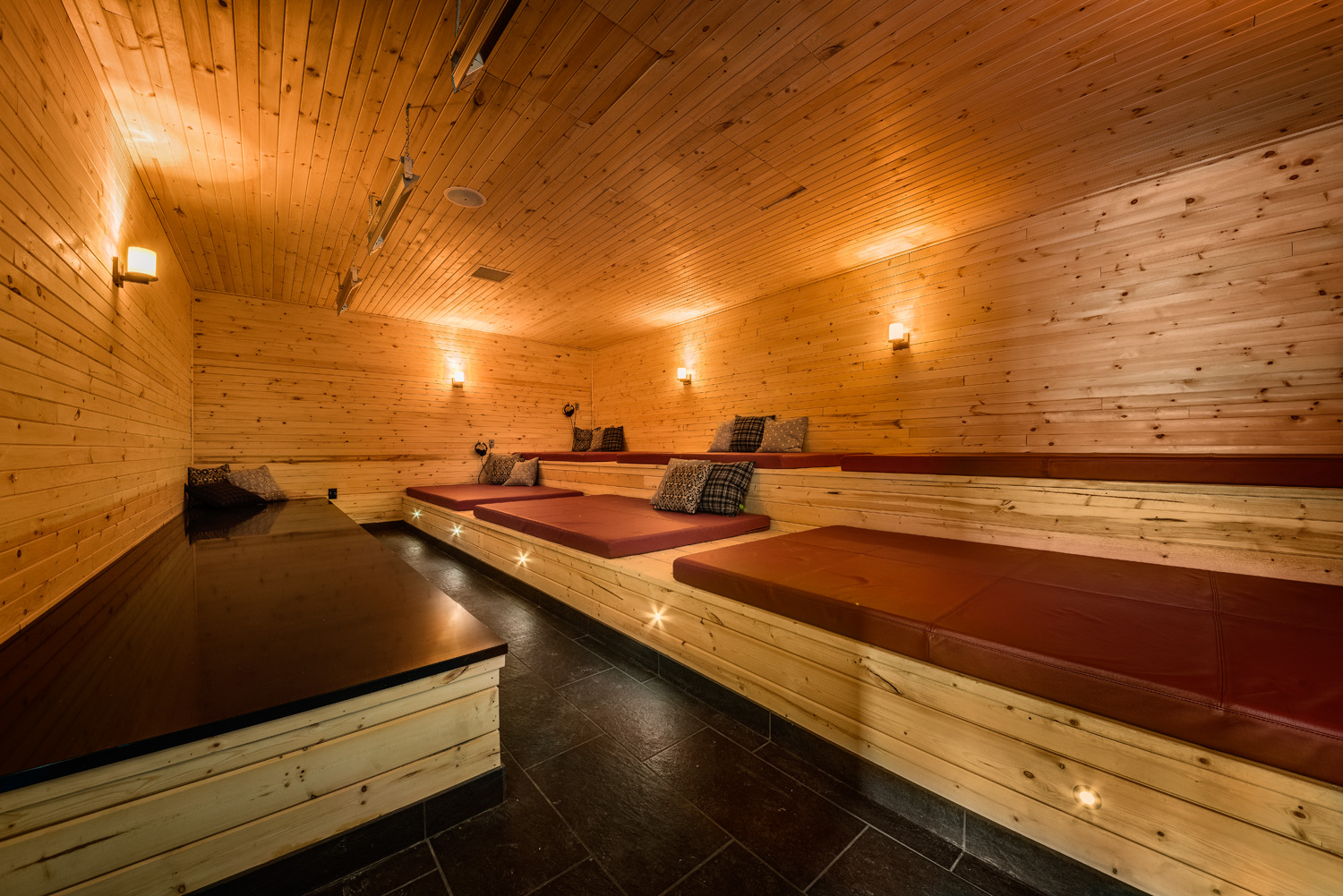 The Scandinavian-inspired day spa is nestled in an upscale neighbourhood on the city’s south side, and was opened in January 2015 by the Nordik Spa-Nature Group which also operates one in Chelsea, Quebec.

The Winnipeg location focuses on the technique of a thermal circuit, where guests warm up in a sauna or steam bath for 10 to 15 minutes, dunk themselves under one of the frigid waterfalls or cold pools for a few seconds to shock their circulatory system, then rest for another 15 minutes in one of the many relaxation areas like the heated hammocks. 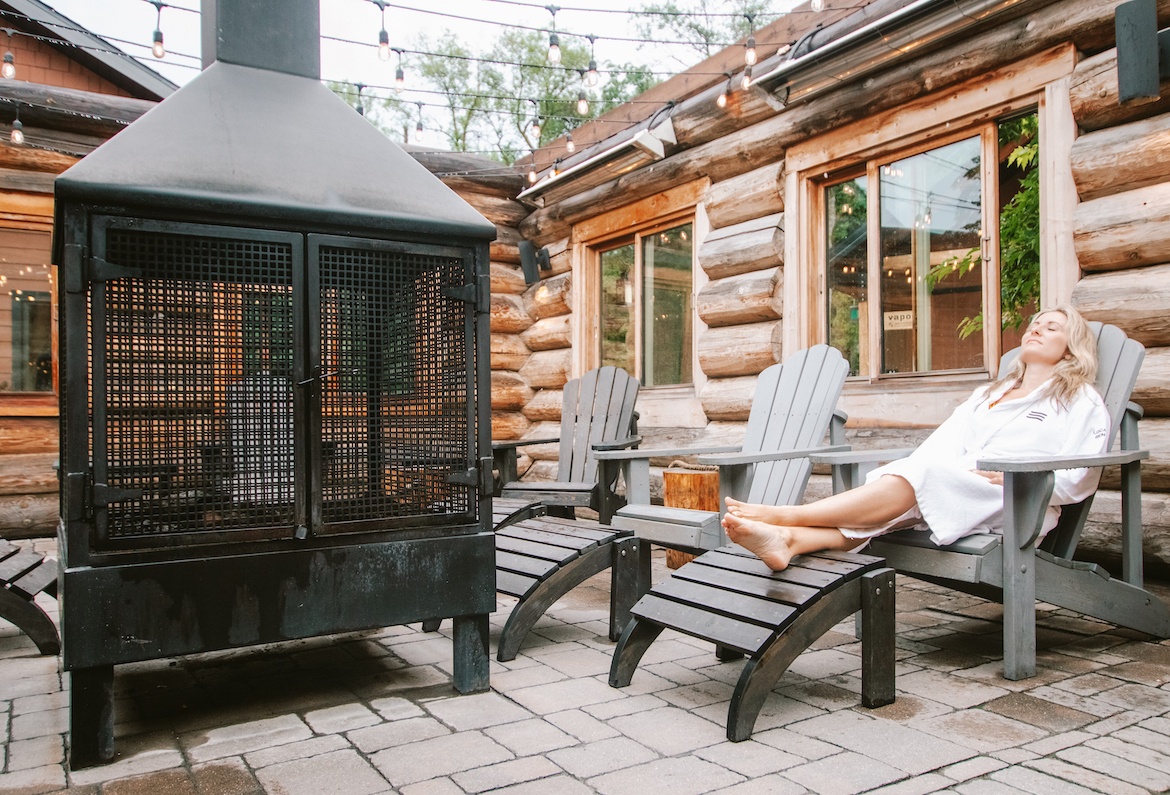 The centuries-old European ritual is repeated over and over, and is said to provide numerous health benefits including eliminating toxins, relaxing muscles, boosting the immune system and even improving sleep quality. The concept has proven extremely popular, with lineups to get inside the Winnipeg spa sometimes winding out the front door. 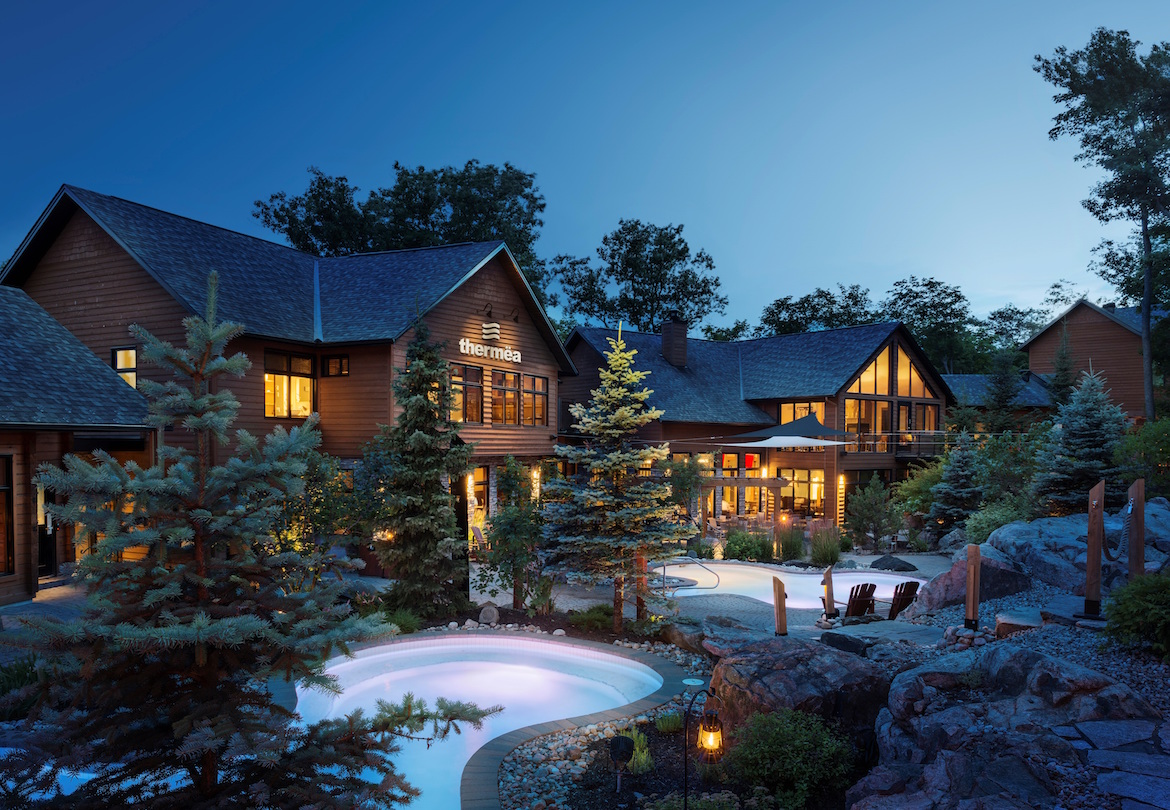 I decided to start the evening off in what always ends up being my favourite spot in a spa: the eucalyptus-infused steam room. Guaranteed to clear out sinuses, it’s the perfect place to ward off a winter cold, unwind and re-energize. I found a spot on a smooth stone bench, and found myself sweating within minutes, literally melting away the stress of my busy travel day. If only all trips started this way! 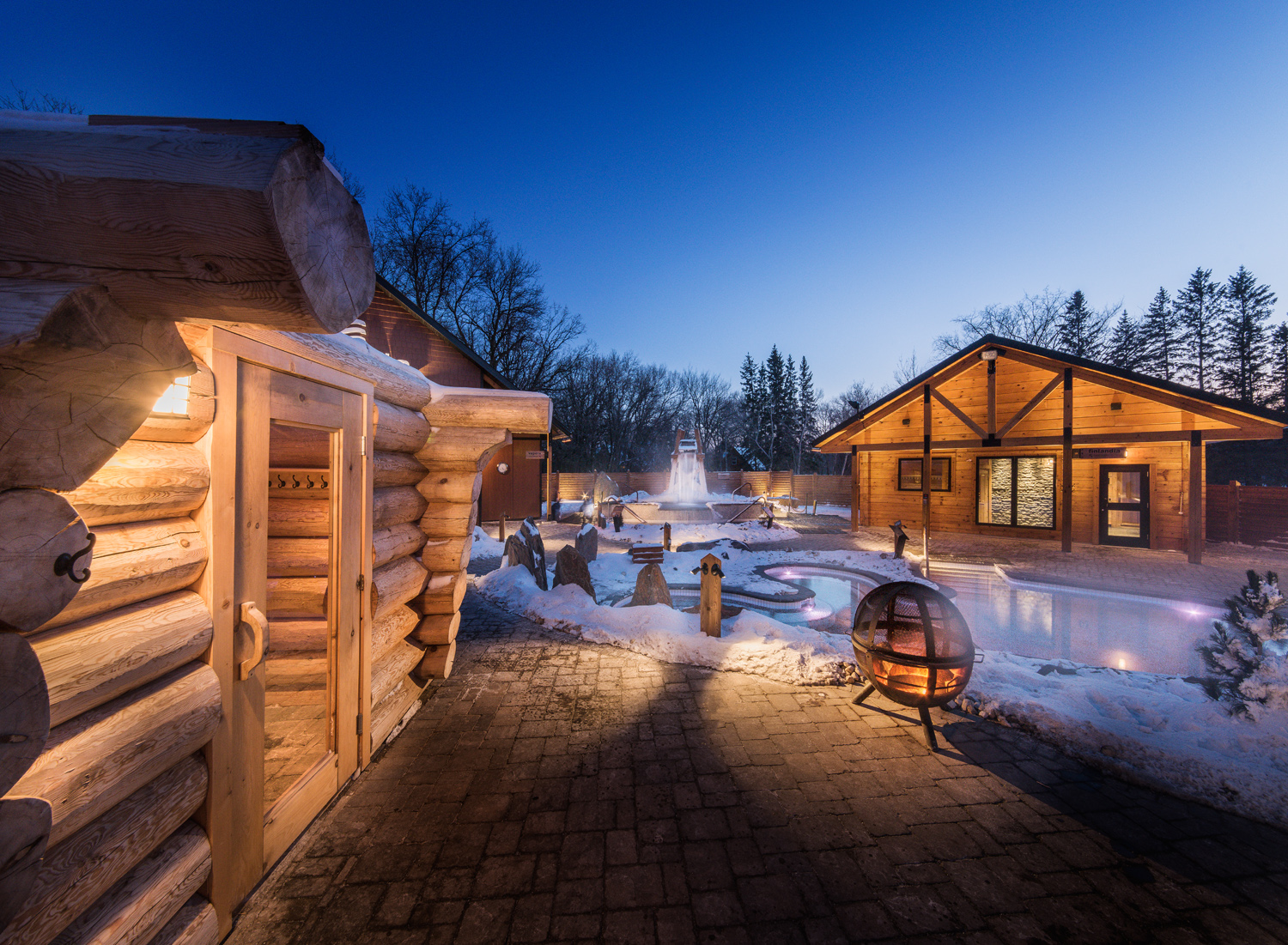 It wasn’t long before my body began screaming at me from the heat, and I reluctantly pulled myself out of the dark sauna to explore more of the spa. I was thrilled to find two wooden buckets brimming with fresh exfoliation salts just outside the door, and scooped a handful of the lavender-scented scrub onto my skin, rubbing it in circles then washing it off under a warm waterfall shower to revitalize my skin. 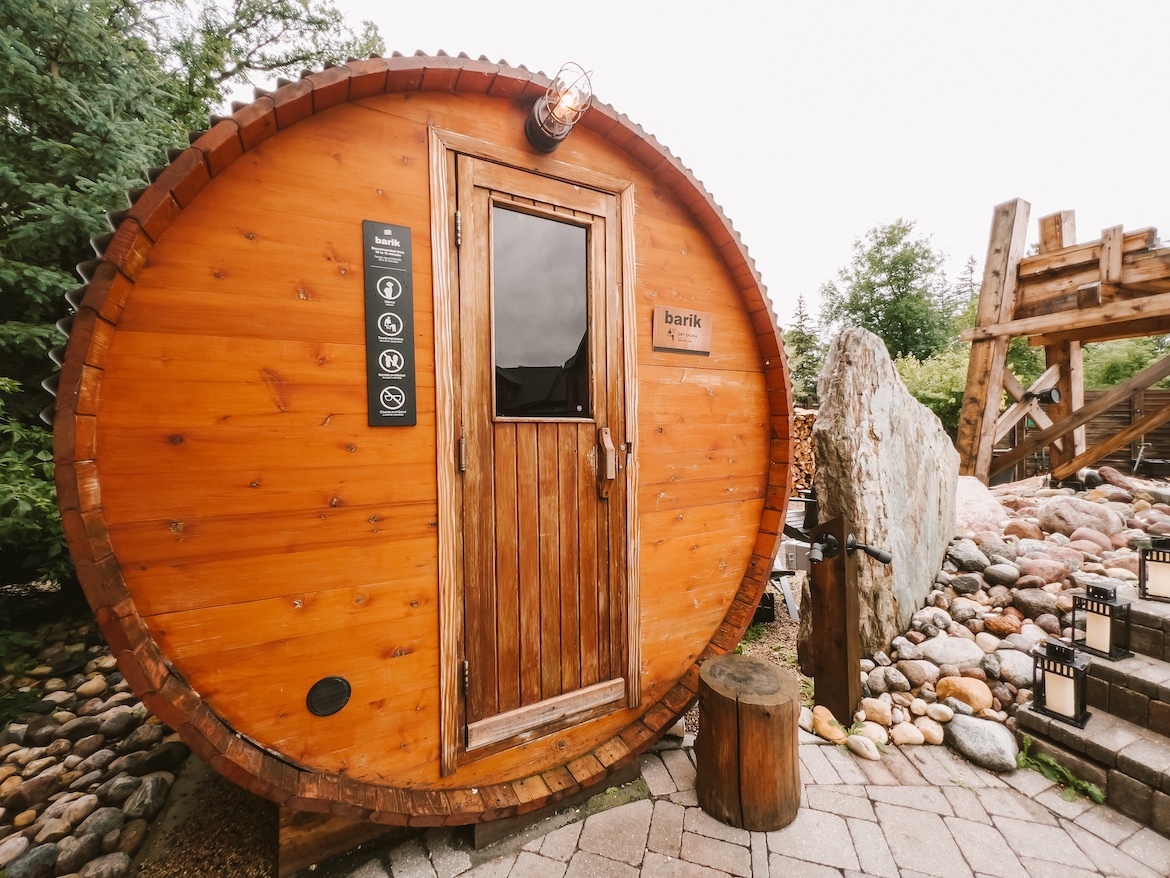 I only had time for a quick dip in one of the warm outdoor pools before it was time to meet up with the rest of my group for dinner, for what turned out to be a feast of the senses. We were fortunate enough to be visiting on a Wednesday night, when Thermëa’s on-site restaurant offers a decadent four-course meal complete with wine pairings. 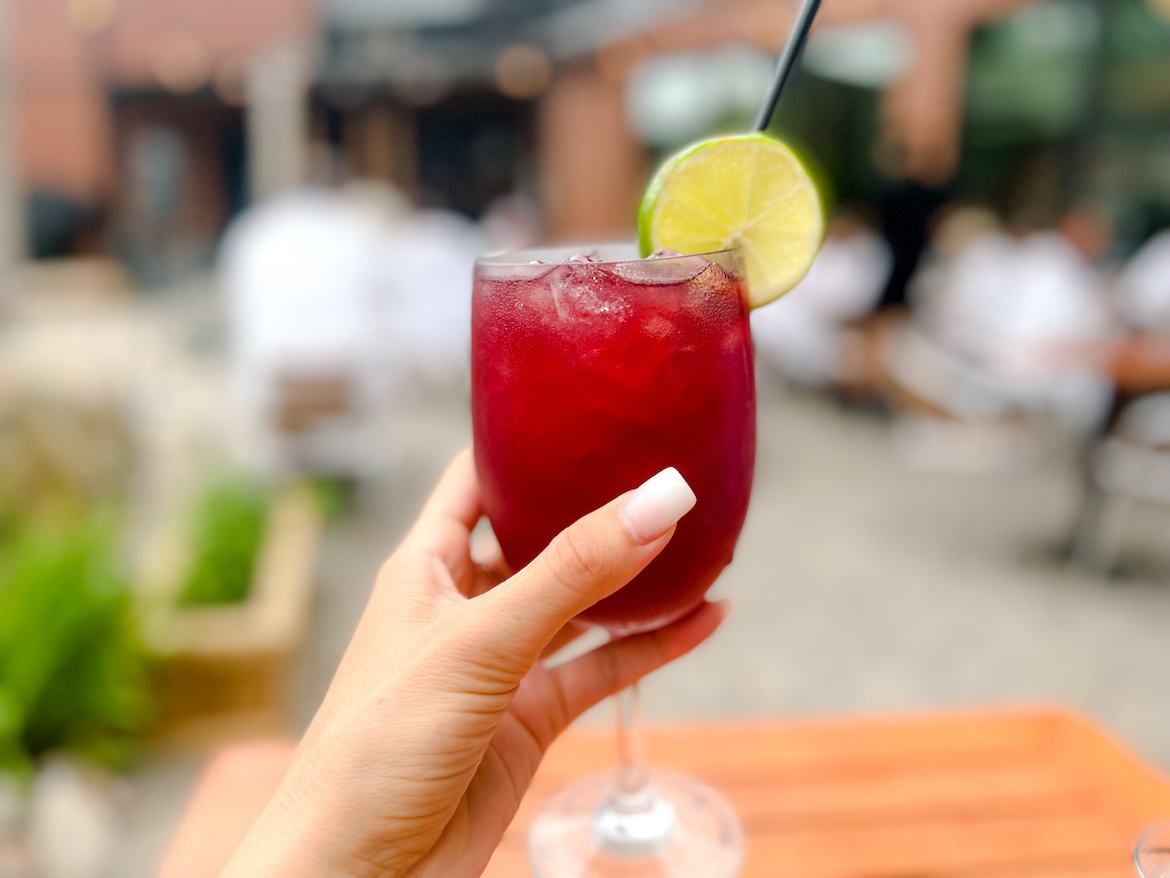 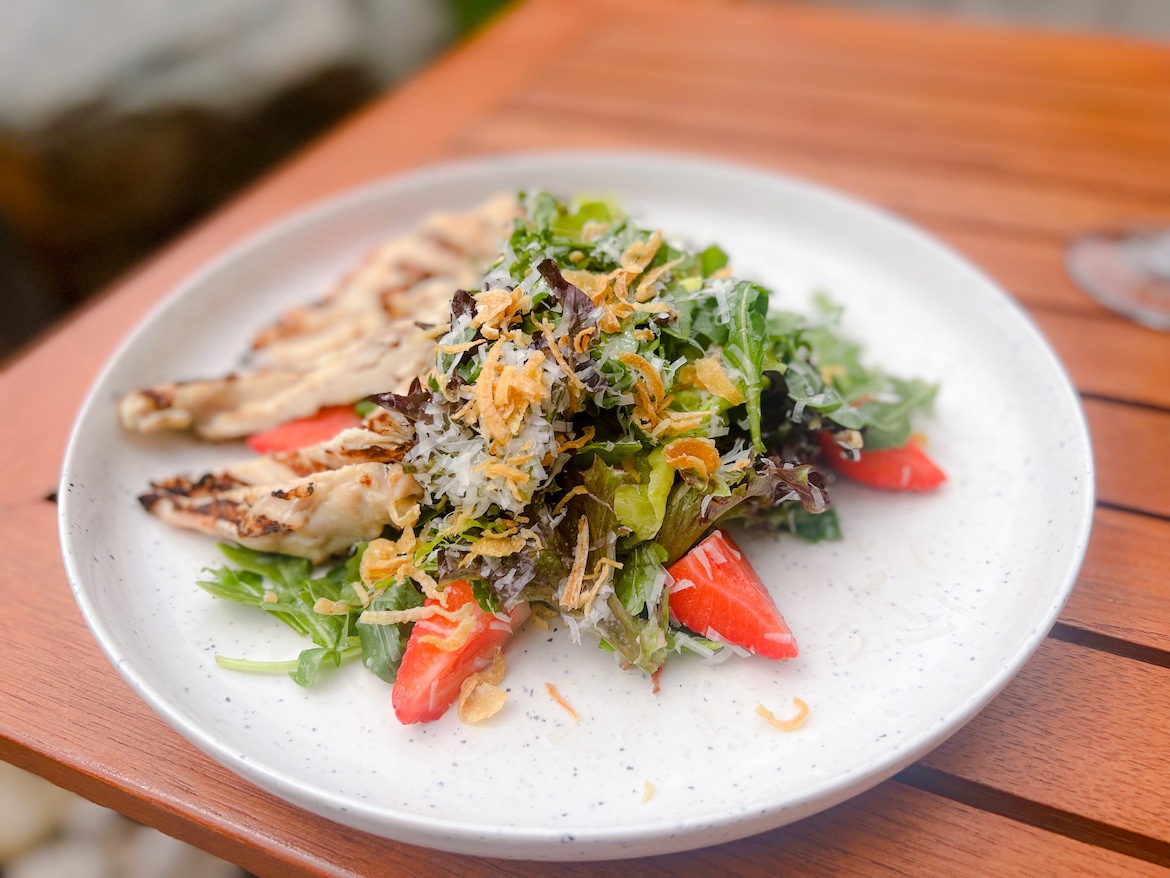 Still bundled up in our bathrobes, we devoured dishes like a fresh strawberry arugula salad, steamed PEI mussels presented with house-baked bread, and a half Cornish game hen topped with lemon thyme butter and cooked to perfection. Despite our tummies already being full from our delicious dinner, none of us could resist tucking into a creamy crème brûlée for dessert. 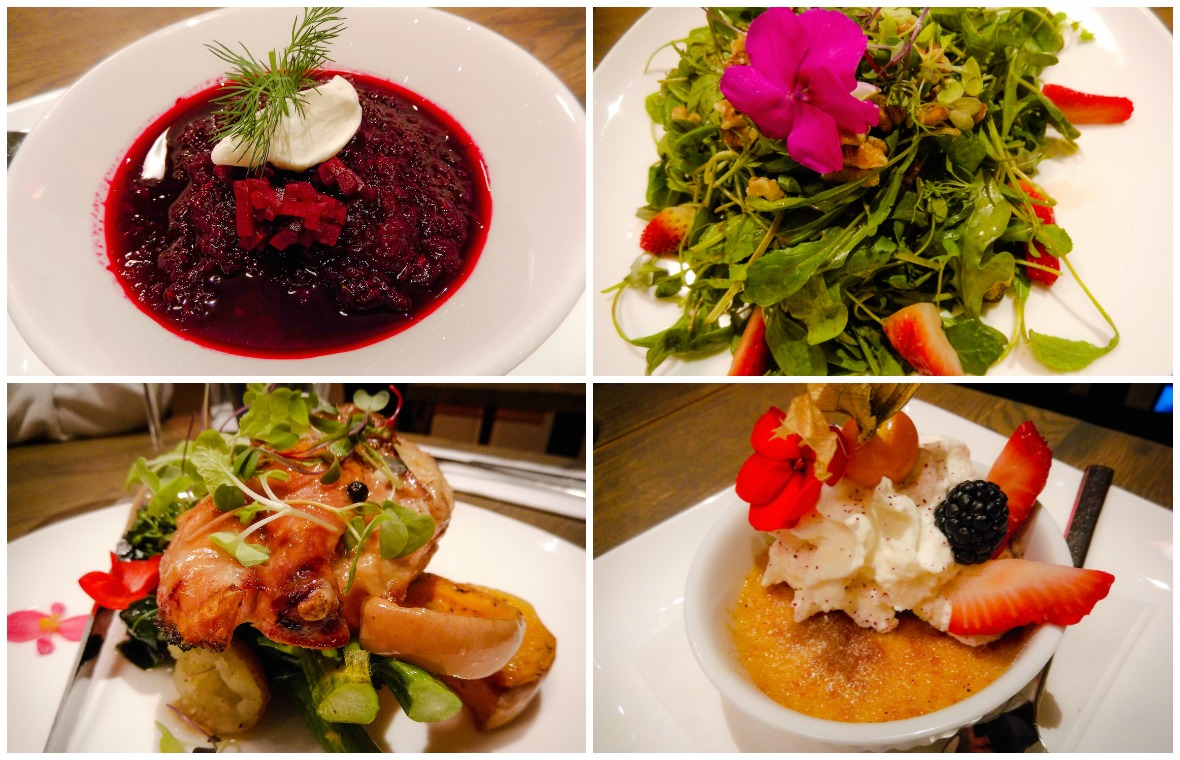 And then we heard the gong.

In a nod to European traditions, Thermëa Spa Winnipeg employs so-called sauna masters who perform a ritual which increases the effect of sweating (also known as an Aufguss ritual, which is German for “infusion”). The sound of the gong beckoned us towards the Finnish sauna, and we relaxed on the wooden slats as buckets were brought in overflowing with snowballs so perfectly spherical they looked like scoops of sorbet. New-age techno music played through the speakers, and soon a young Italian man named Carmelo appeared in the doorway, draped in a towel. 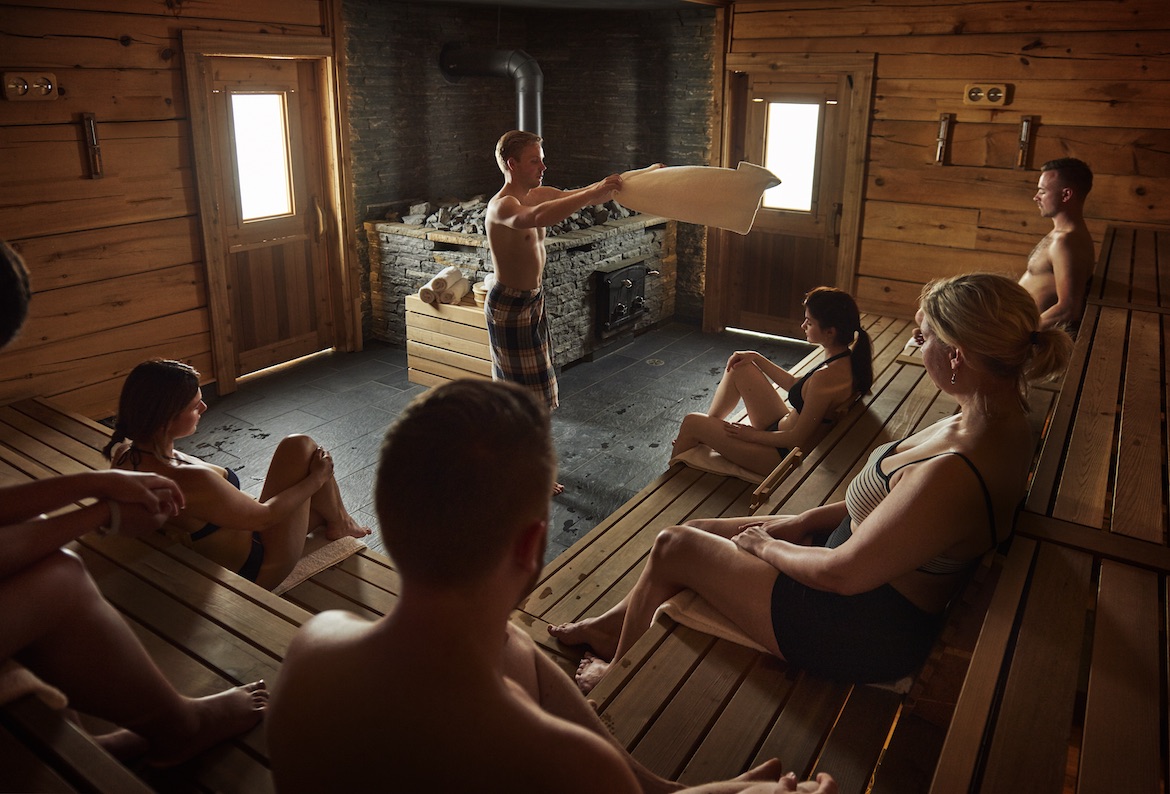 As we watched, he dropped the large snowballs which were soaked in essential oils onto hot stones, all in time to the music. As steam sizzled off of them instantly raising the humidity in the room, Carmelo picked up a fresh white towel and began spinning it through the air, like he was making pizza dough.

He stood in front of each of us, twirling the towel and pushing waves of hot air over us to intensify the aroma of the oils. By the time the third song played, he had abandoned his towel in favour of a red blanket, and we watched mesmerized as he whipped it around like a matador as steam swirled around the sauna. 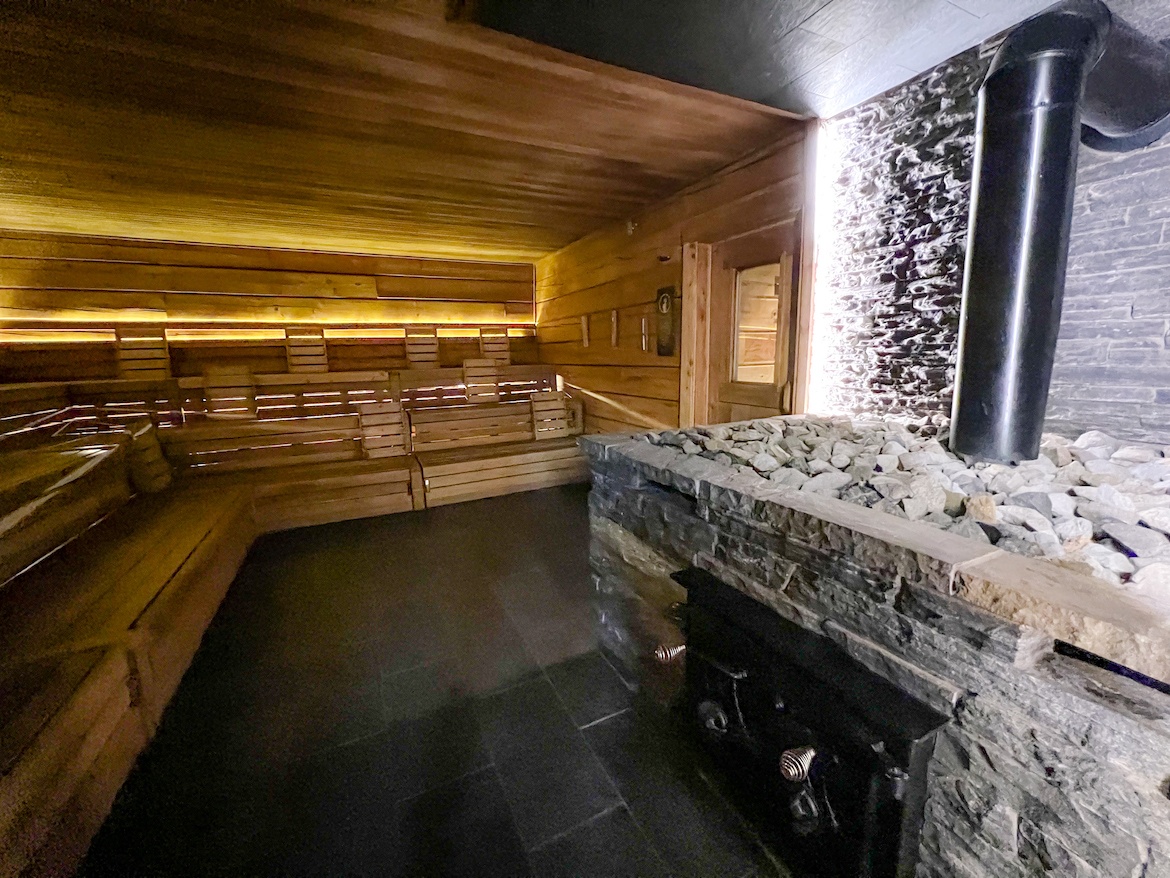 It was a fitting finale to our relaxing evening at Thermëa spa in Winnipeg, which turned out to be the perfect haven to beat the Canadian cold.

Cost: Pricing for the all-day thermal experience starts at $48 per person, with bathrobe rental costing an additional $12. Massages cost between $110 and $165, while body treatments range from $100 to $135. There are also special packages available, such as a yoga-spa combination and the aforementioned Wednesday night dinner and wine pairing.

When to go: Thermëa day spa Winnipeg is open all day long, year-round.

What to bring: A swimsuit and sandals, and you can bring your own bathrobe if you don’t want to rent one. The spa provides towels and lockers, as well as amenities like shampoo, conditioner and hair dryers. 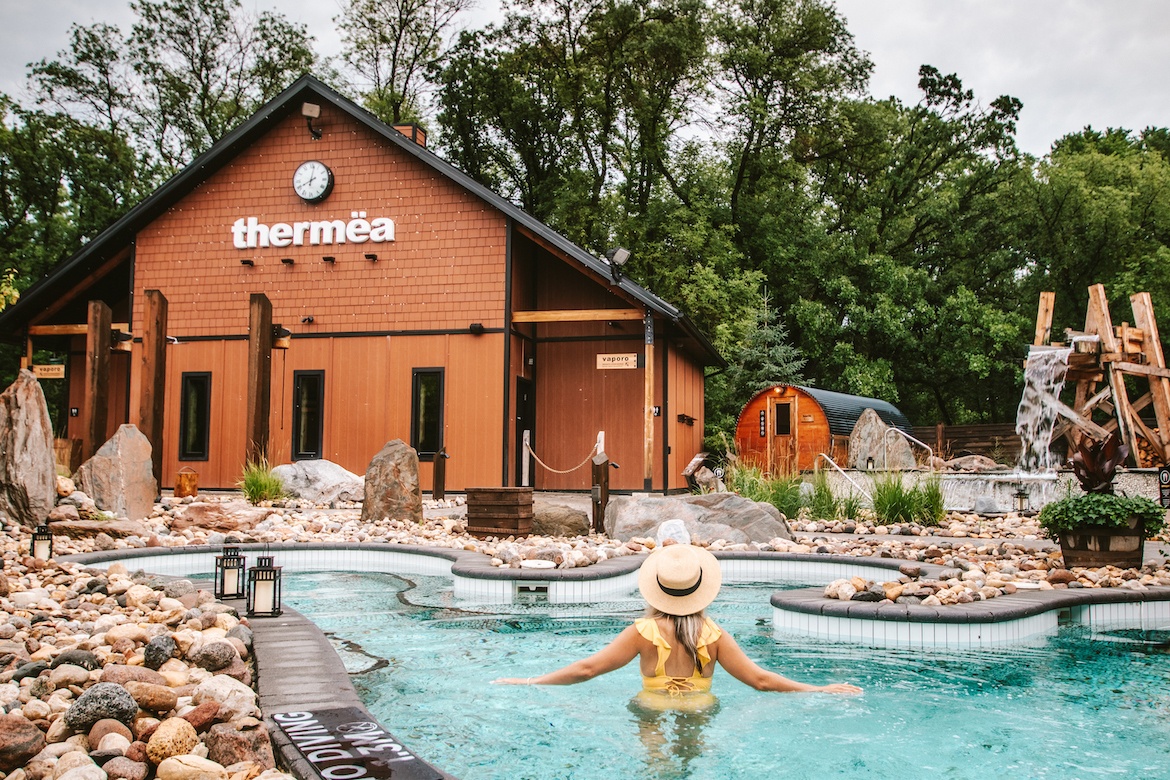 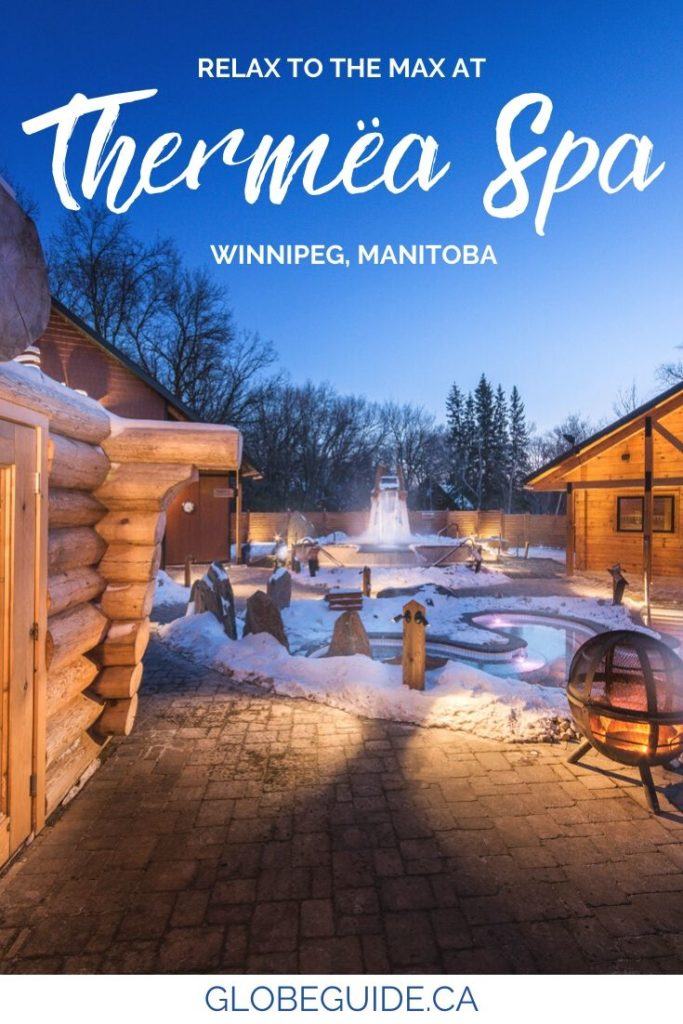 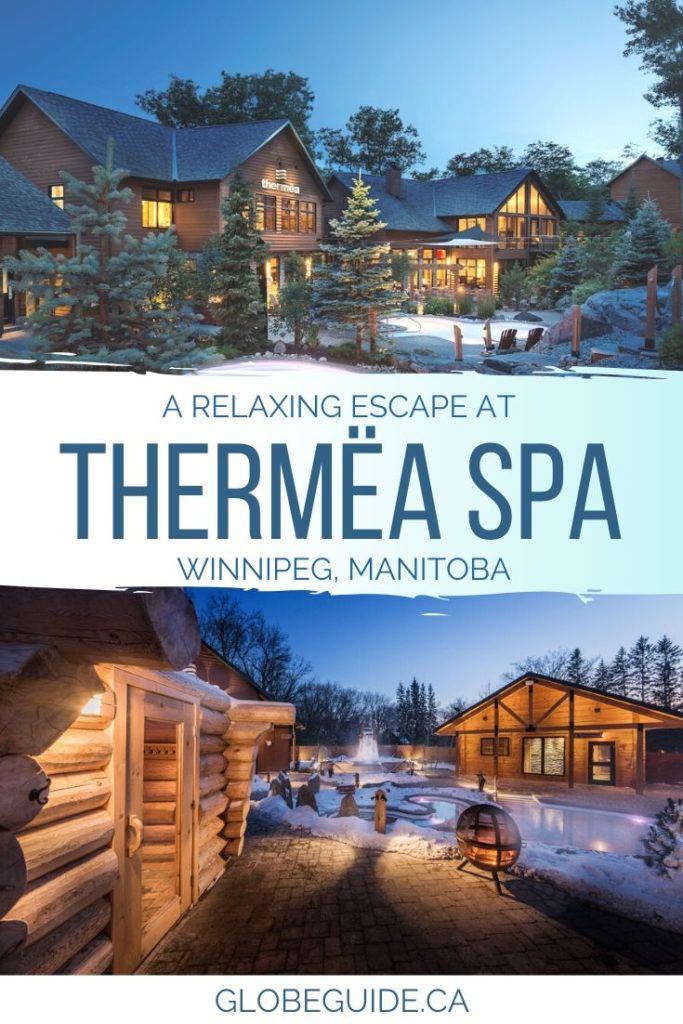 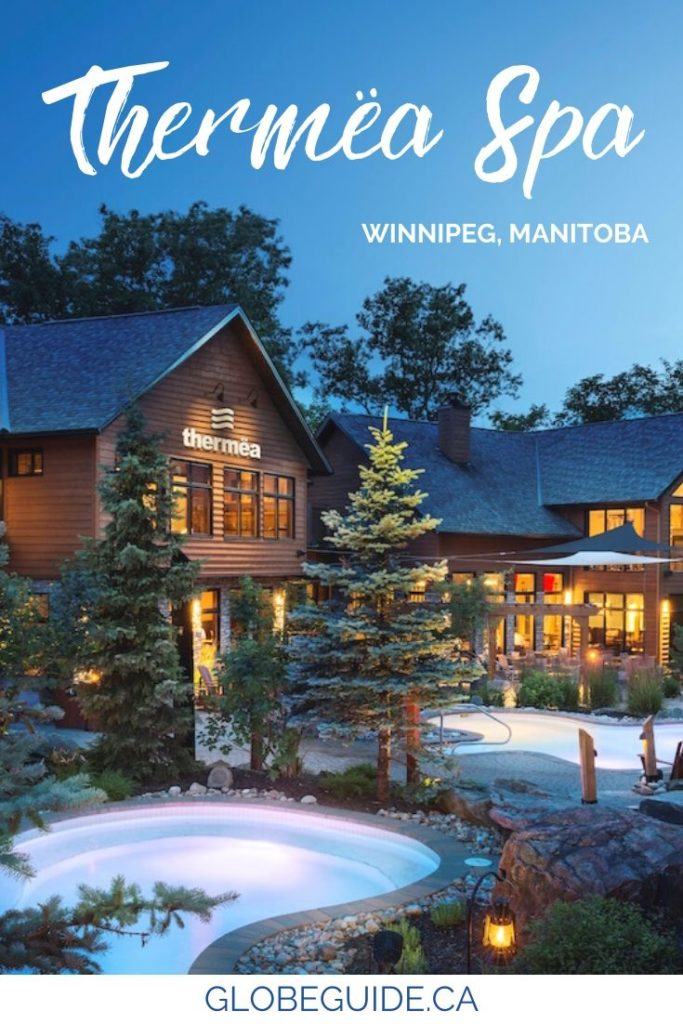 Globe Guide enjoyed Thermëa as a guest of the spa. As always, hosts have no editorial influence on articles.