Fun things to do in Bogota, Colombia 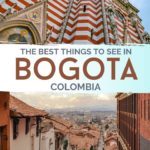 Like many large South American cities, Colombia’s sprawling capital Bogota can be described as chaotic. Home to nearly nine million people, roadways are clogged with a dizzying amount of speeding, honking vehicles trying to dodge the massive potholes that litter the streets. 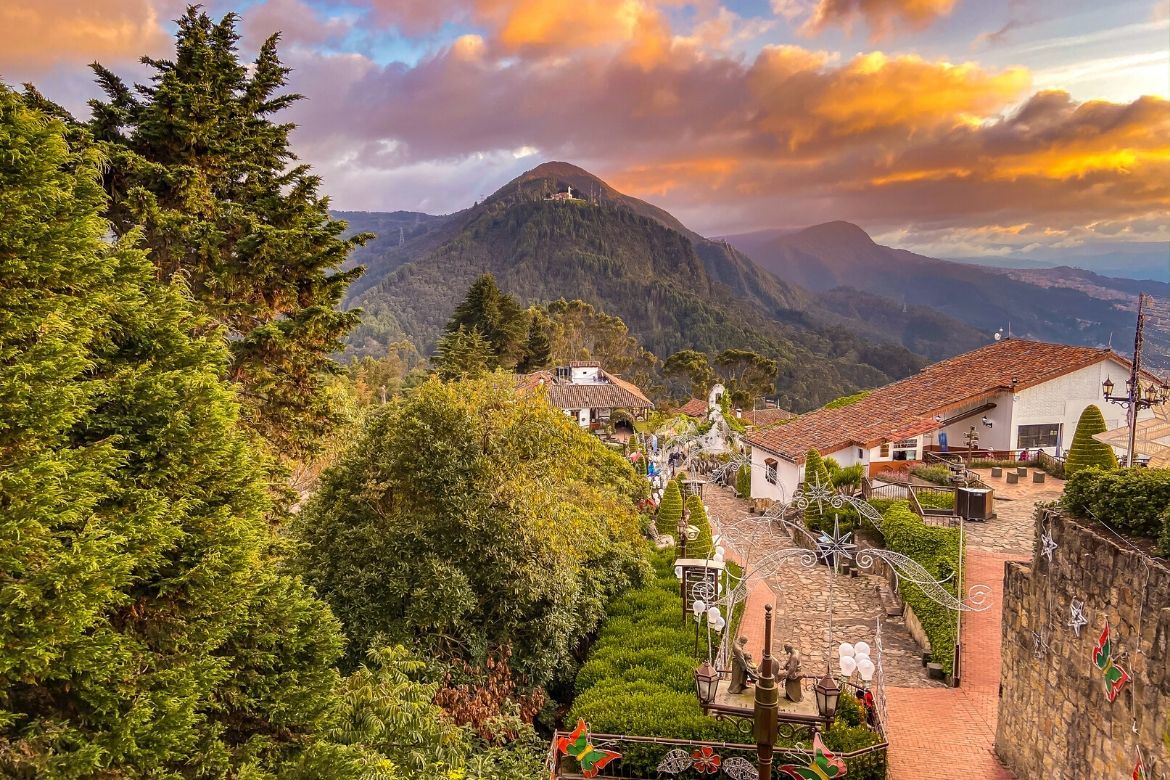 Dogs bark all night long, and the streets are full of commuters spilling out of bus stations as they clamour for a spot to get home. 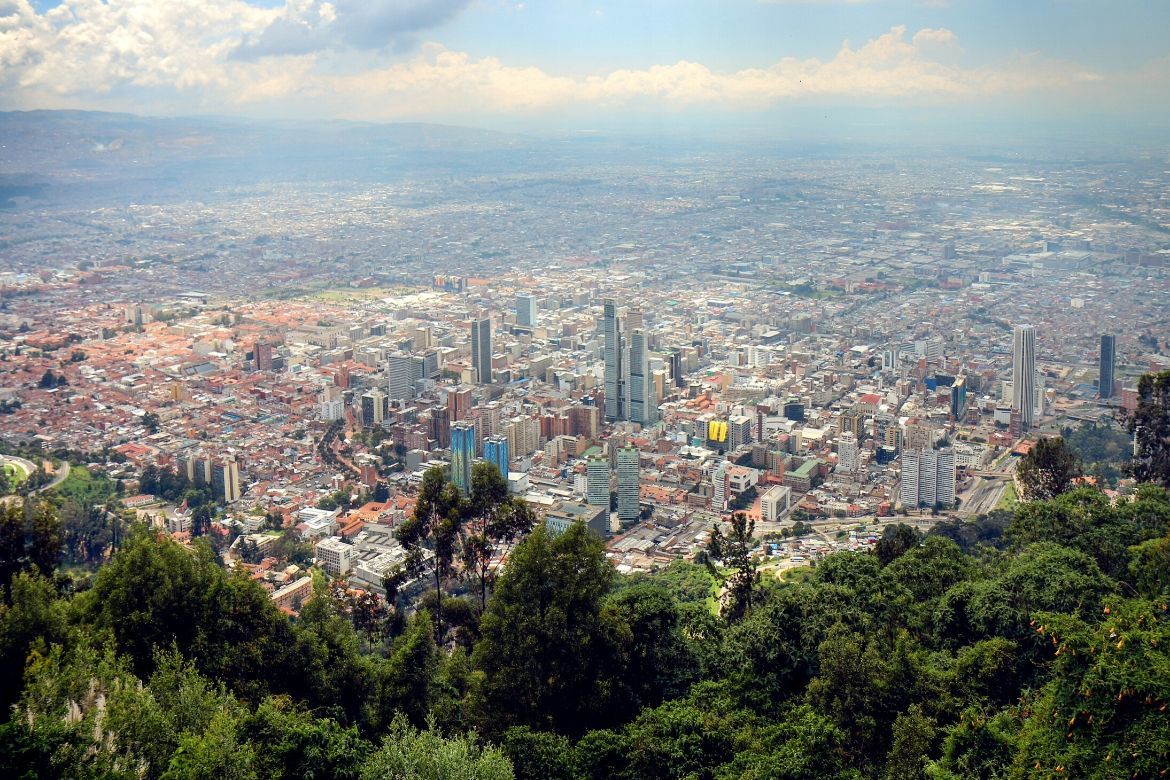 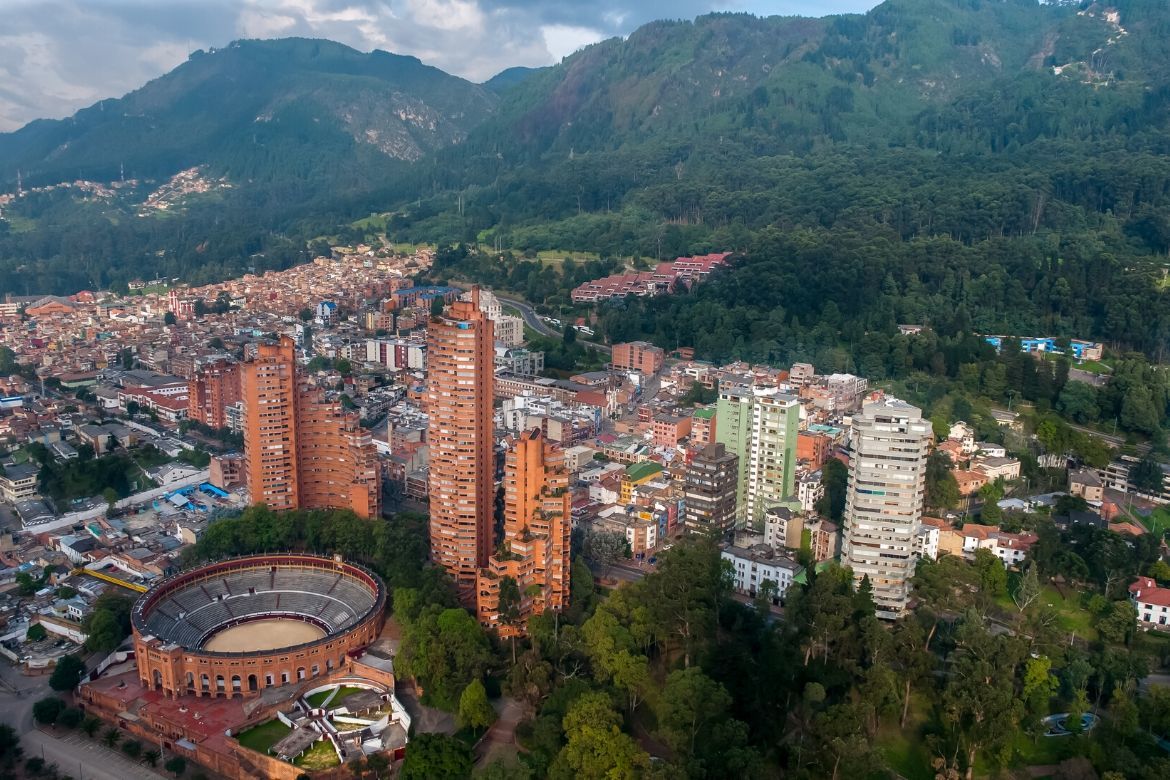 However, look past the frenetic pace and you’ll find a beautiful, mountainous city framed by a lush backdrop and leafy green trees. Historic architecture anchors the city centre, and even the graffiti sprayed on just about every public wall is picturesque and has become a tourist attraction on its own.

From incredible viewpoints to cool districts, here are the best things to do in Bogota, Colombia. 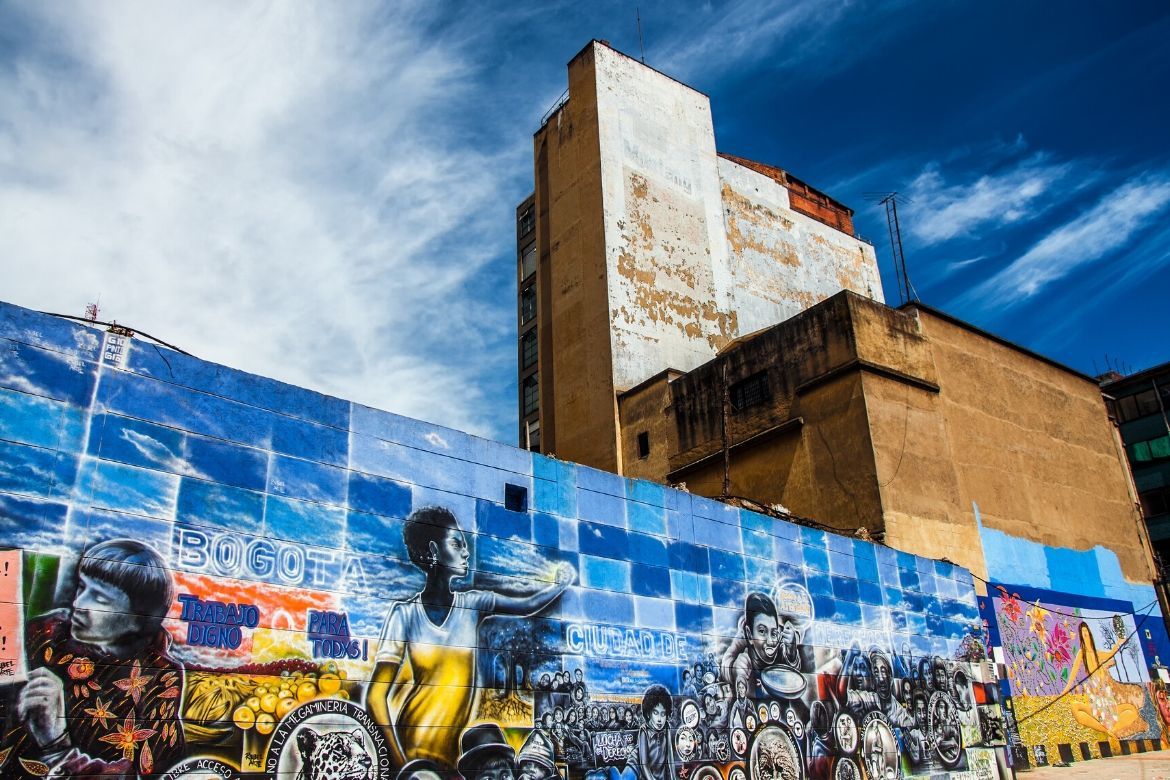 Most Bogota sightseeing tours start in La Candelaria, which is the historic centre and heart of the city. With narrow streets, a towering cathedral in the Plaza de Bolivar, a church dating back to the 1600s, and even the presidential palace which takes up several city blocks, it’s one of the most charming places to visit in Bogota. 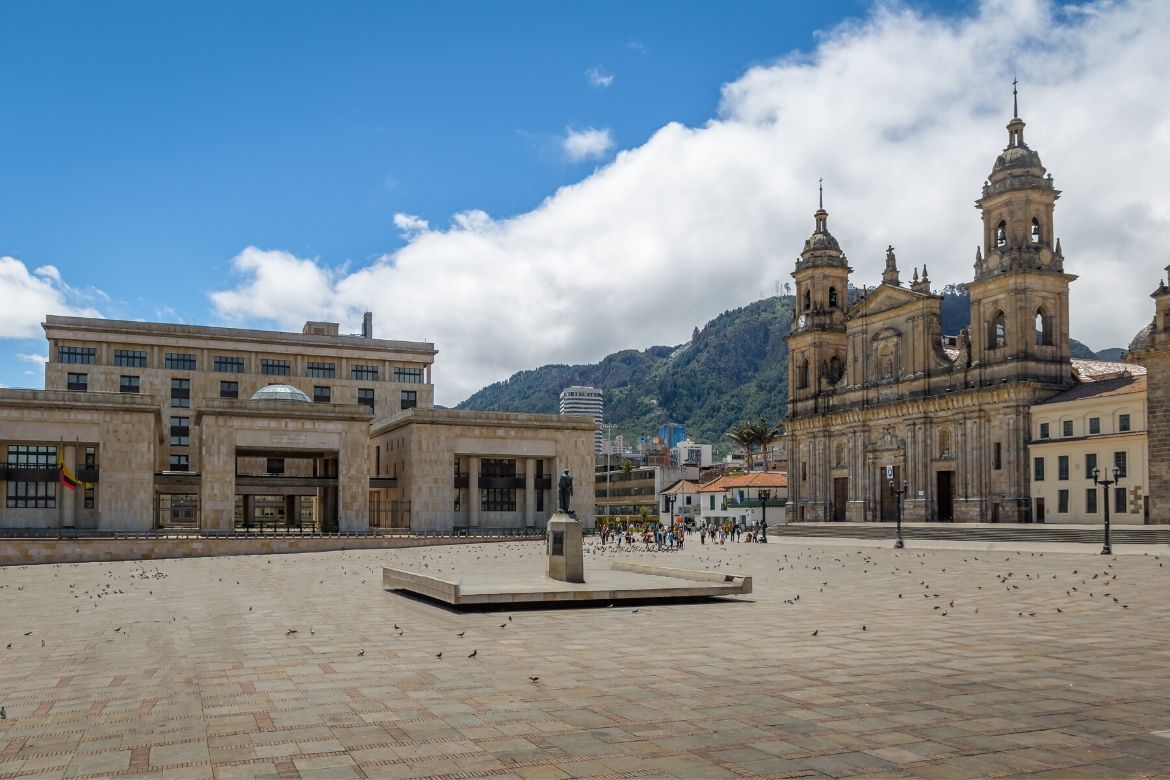 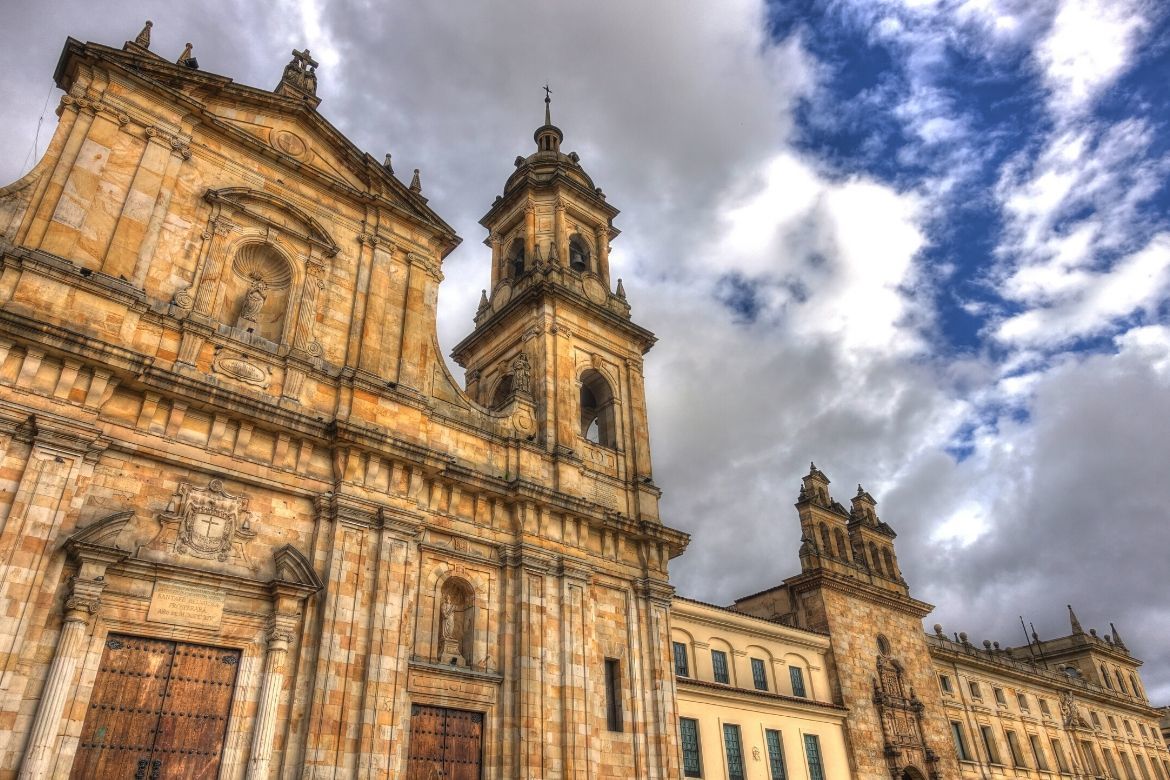 The buildings are great examples of Spanish colonial architecture, and the district is home to the Museo Iglesia Santa Clara which is one of the oldest churches in Bogotá. Head inside to marvel at its ornate interior painted entirely in gold, and covered with more than 100 paintings and sculptures.

The National Shrine of Our Lady of Carmen (Santuario Nuestra Senora del Carmen) is another one of the best Bogota tourist attractions, and famous for its striking red and white facade. 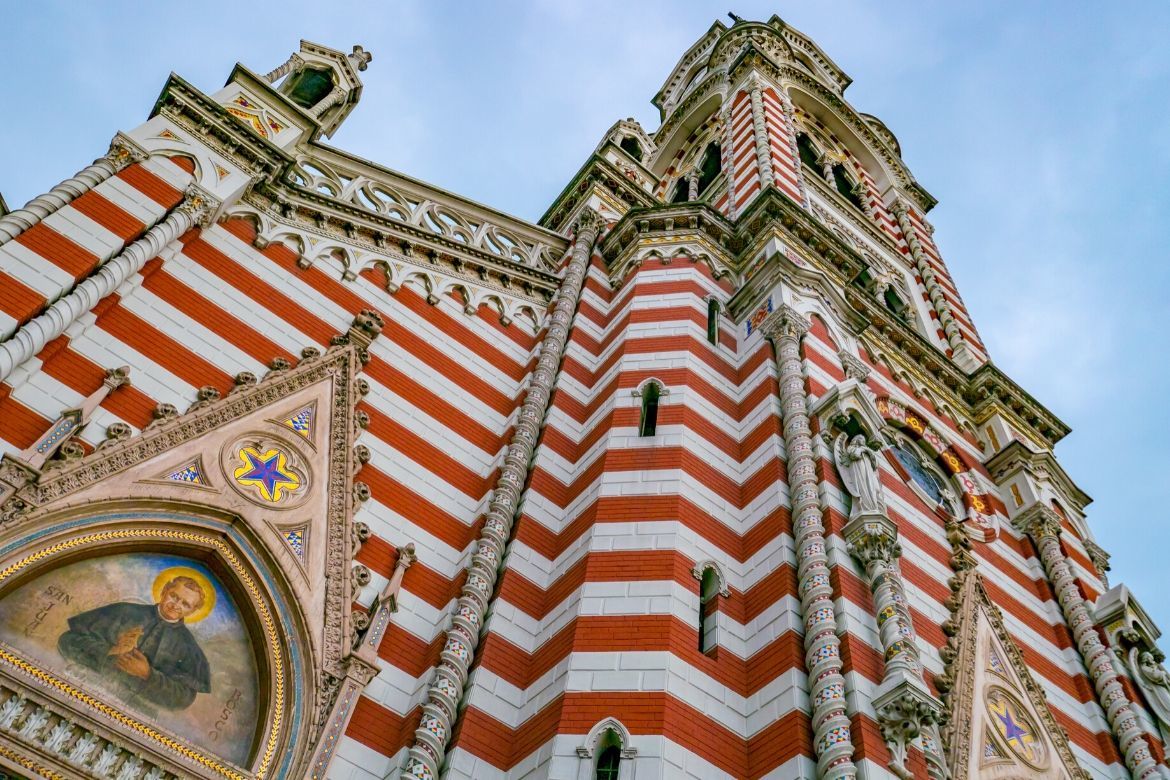 For those interested in art, head to the Museo Botero which is dedicated to Colombian artist Fernando Botero, or book a graffiti tour to see the incredible street art. 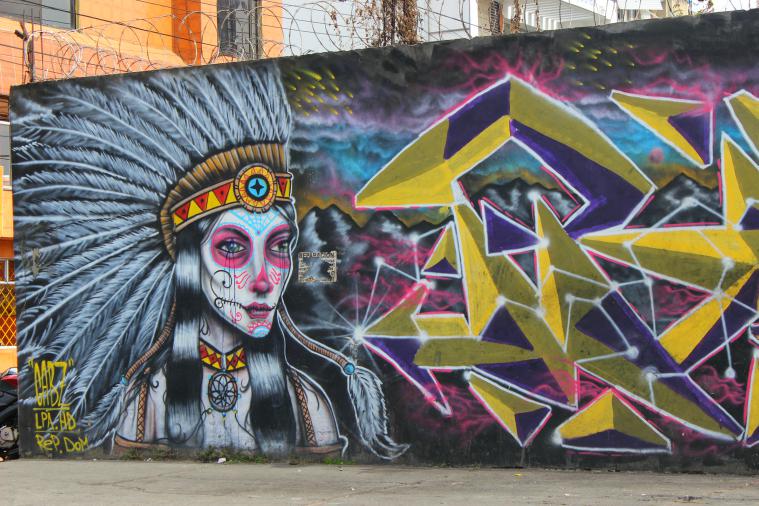 The district’s main thoroughfare is also a site in itself. Closed to traffic, the streets are lined with performance artists, including some strangely dressed folks (think superheroes and aliens), musicians, and even artists who use spray paint and fire! There are also a number of roaming food stalls serving up Colombian food like fresh fruit, juice or a sweet treat.

Every Sunday, a number of roadways leading into the district are totally shut down to traffic from 7 a.m. to 2 p.m., so cyclists and pedestrians can enjoy the streets. 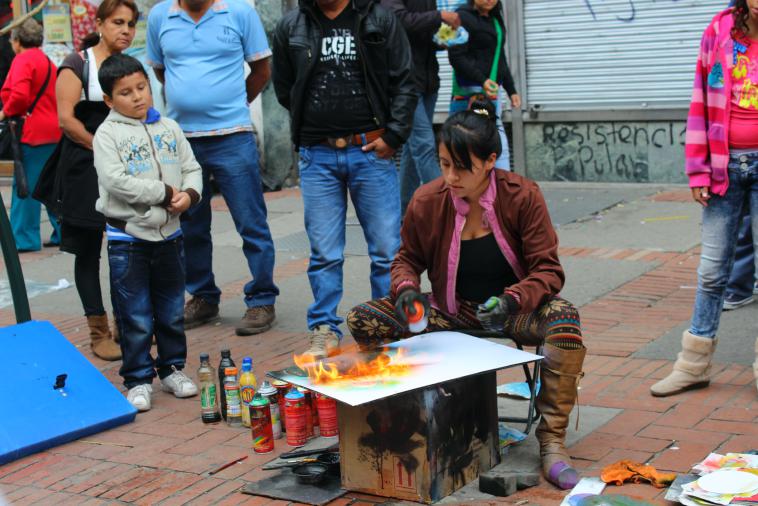 La Candelaria is also where you’ll find the Museum del Oro, a multi-storey gold museum filled with ancient treasures, collections from different periods of Colombia’s history as well as displays detailing the country’s past. Keep in mind the building is closed on Mondays. 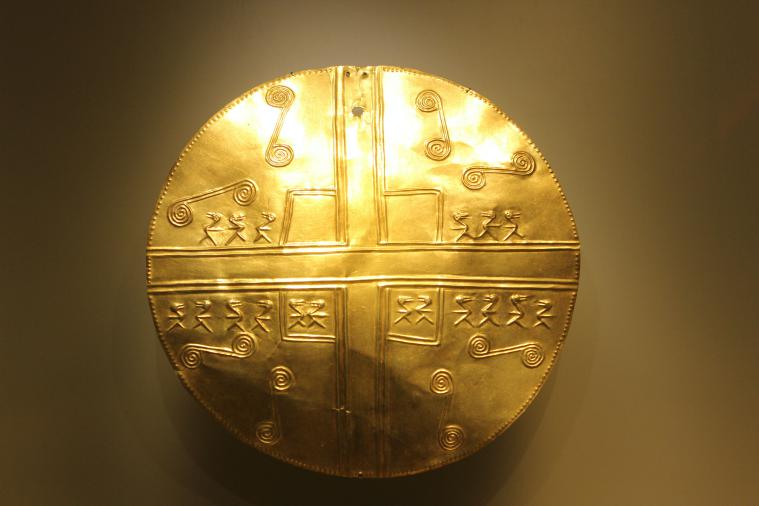 One of the top things to do in Bogota is to Monserrate to enjoy the incredible views granted from this sky-high vantage point. 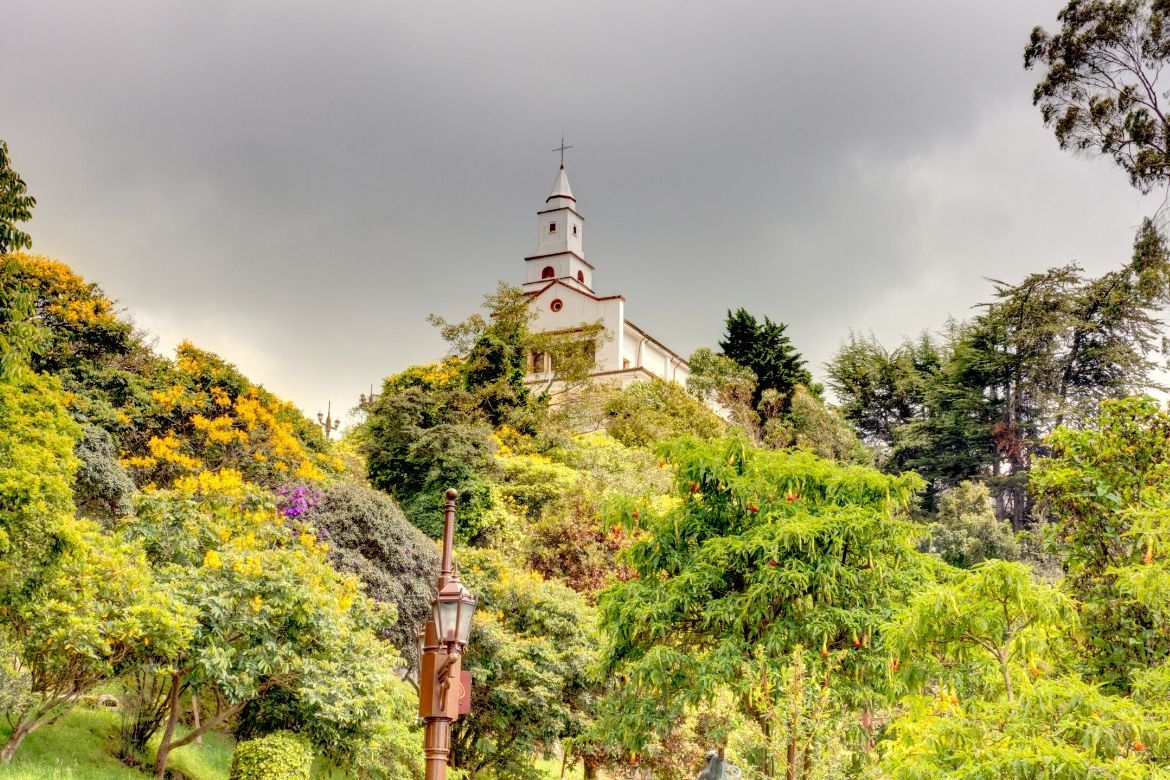 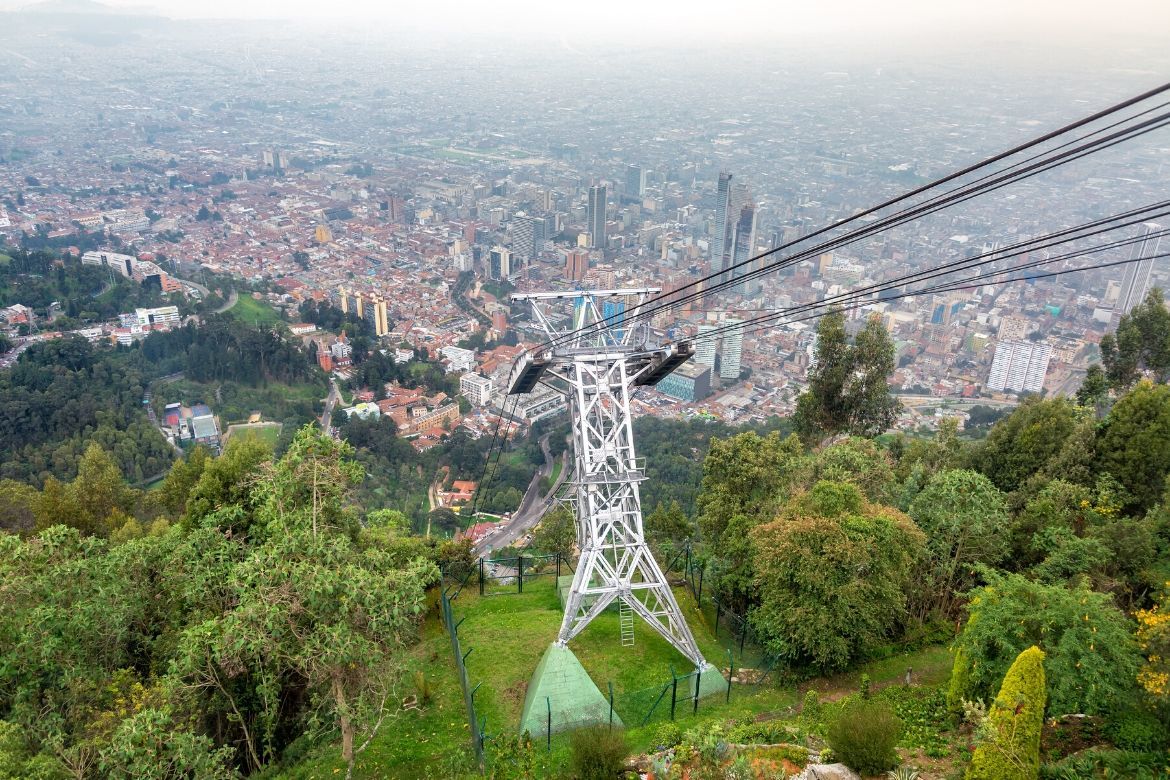 Monserrate is a 3,152 metre high mountain in the centre of the city with a church, restaurants, cafes, an exercise area and dozens of beautiful, lush gardens. Pilgrims travel up the mountain to take in the Stations of the Cross pathway, and there’s also a small market with handicrafts and souvenirs.

Monserrate is an incredibly romantic spot, making it a popular place for engagements as the twinkling lights of the city shine below. 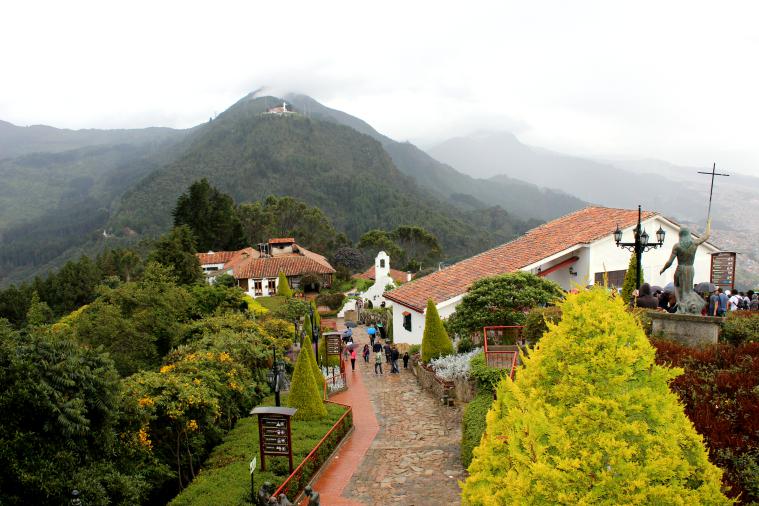 The top of Monserrate.

To reach the top, most people take the Telefirico which is made up of cable cars that can hold up to 40 people a time while gliding soundlessly up the side of the mountain. There’s also a funicular, which is basically a vertical train. Both take only a few minutes to go up or down, and cost about $7 each way. The price on Sunday is about half that, but keep in mind it can be extremely busy—we’re talking hour and a half queues to get back down! Click here to book

It is also possible to walk up or down the mountain for those who are up to the challenge. In the past it was considered dangerous due to thefts, but police have since been stationed along the trail. 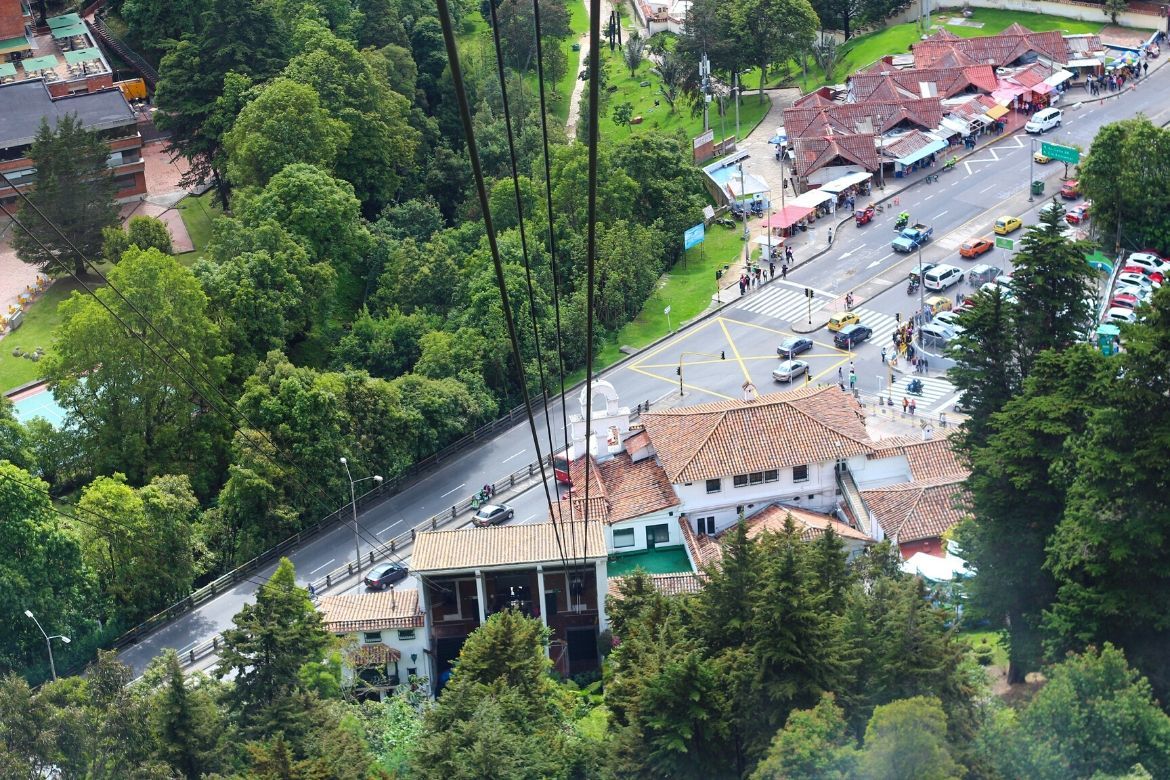 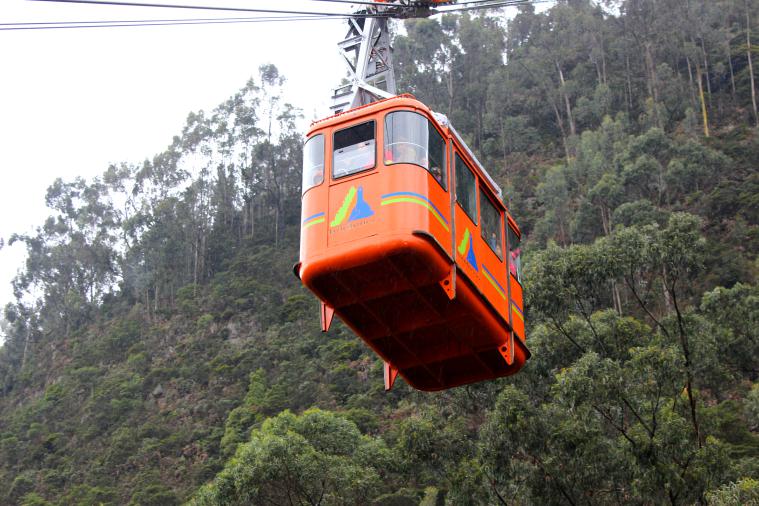 The Teleifirico heading up to Monserrate.

This district is cosmopolitan cool, with luxury retailers (think Louis Vuitton, Burberry), glitzy shopping malls and rows and rows of outdoor cafés, bars and nightclubs. Streets in the Zona T area of the district aren’t open to vehicles, and at night the area is hopping with Bogota’s best dressed enjoying a night out on the town.

On the weekend some bars charge around $5 cover, but you can get around it by heading to one of the many pubs or restaurants. Prices are also much higher in the area than elsewhere in the city, but it’s worth it for the ambiance. 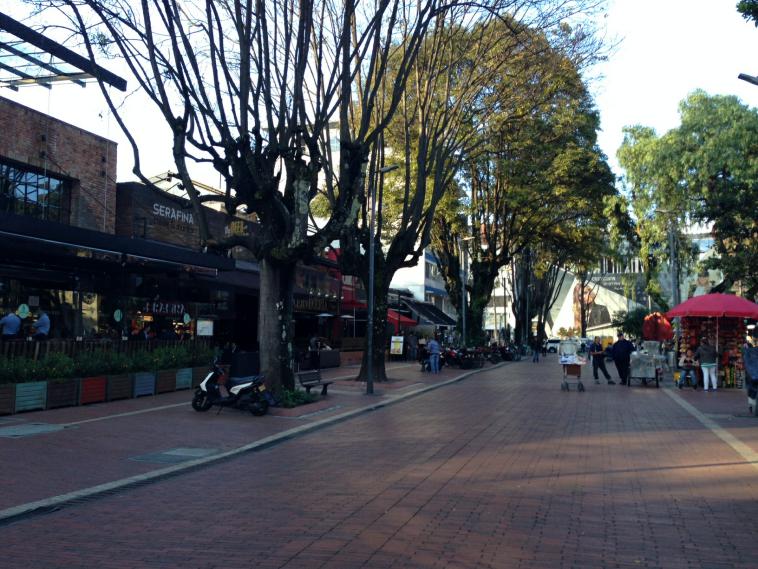 If you don’t feel like braving the crowds at Monserrate but still want an epic view, head to the high hills of La Calera.

A winding road takes you up the mountainside, and there are a couple of spots to pull over and take in the city below. One offers a simple set up of a few folding chairs along the cliffside accompanied by vendors selling cold drinks. Just a little way up the road, there are a number of restaurants that make the most of the view, as well as small bars. There are also horseback riding stables, so trail riding is an option. 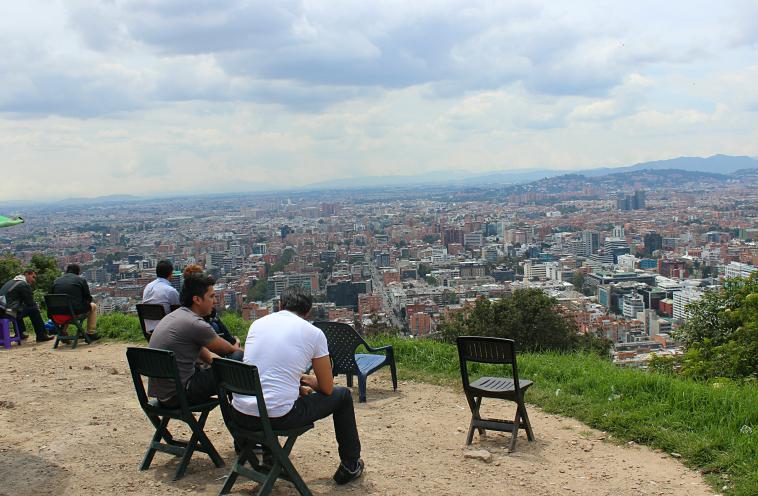 The view from La Calera.

Due to the city’s huge footprint and frequent traffic jams, it’s not always easy to get around. Book one of these organized tours to experience some of the top Bogota attractions without having to worry about the logistics:

A great way to get off the beaten path and see more of what life is really like in Bogota is booking this tour of El Paraiso, a colourful, picturesque neighbourhood that’s in the midst of a rejuvenation from slums to art hub, thanks to a massive undertaking by community members. Or, fill up on a traditional Colombian breakfast then go on a hike in the East Hills to enjoy spectacular city views. Click here to book

There are also some cool, quirky day trips from Bogota, including a cloud forest, an underground cathedral carved out of salt, and a theme park that has a life-sized replica of the Taj Mahal:

Where to stay in Bogota 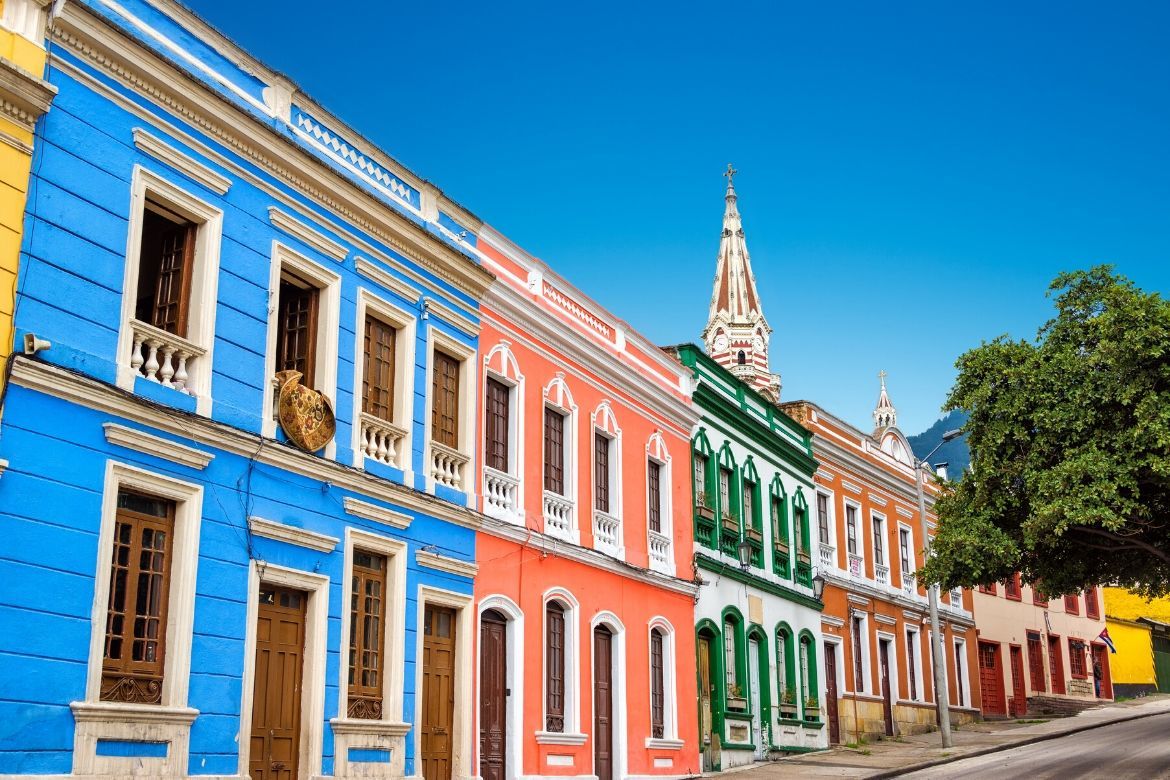 Getting around: The TransMilenio bus lines go around the city, but keep in mind they are packed like sardines during rush hour and are famous for being the scene of assaults and theft. Alternatively, bright yellow taxis are everywhere- try and agree on a price before you get in as drivers won’t always use the meter.

Currency: Colombia uses the peso, and unlike many other countries in South America US dollars are not usually accepted.

Safety tip: Keep a close eye on your valuables as Bogota is full of pickpockets, especially in La Candelaria. Check out these tips to avoid getting robbed while travelling. 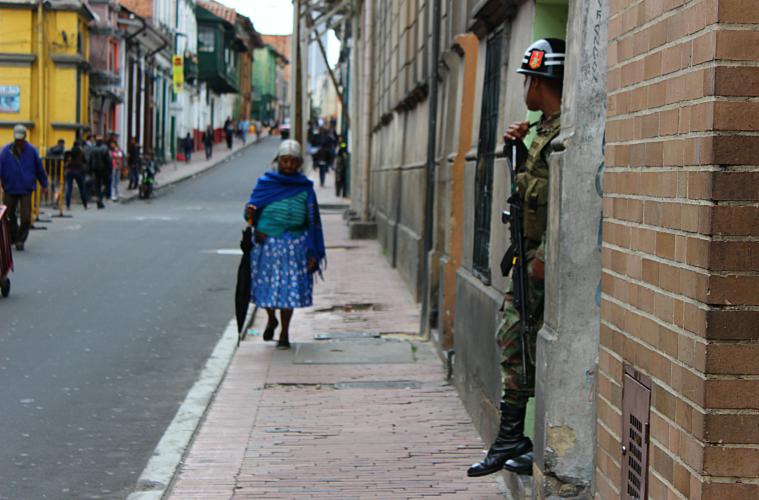 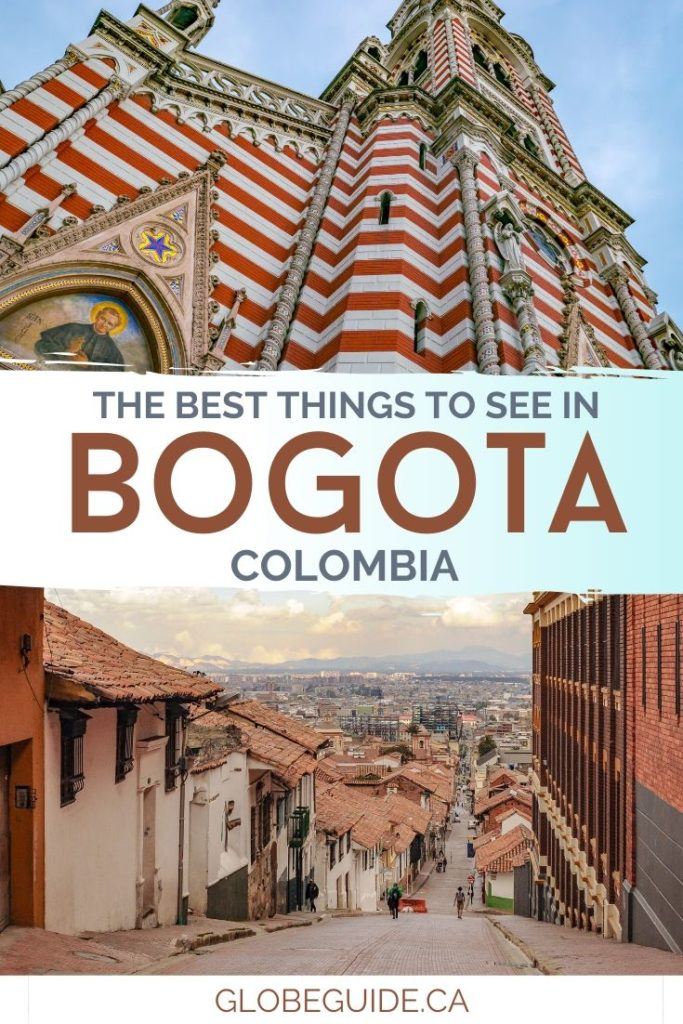 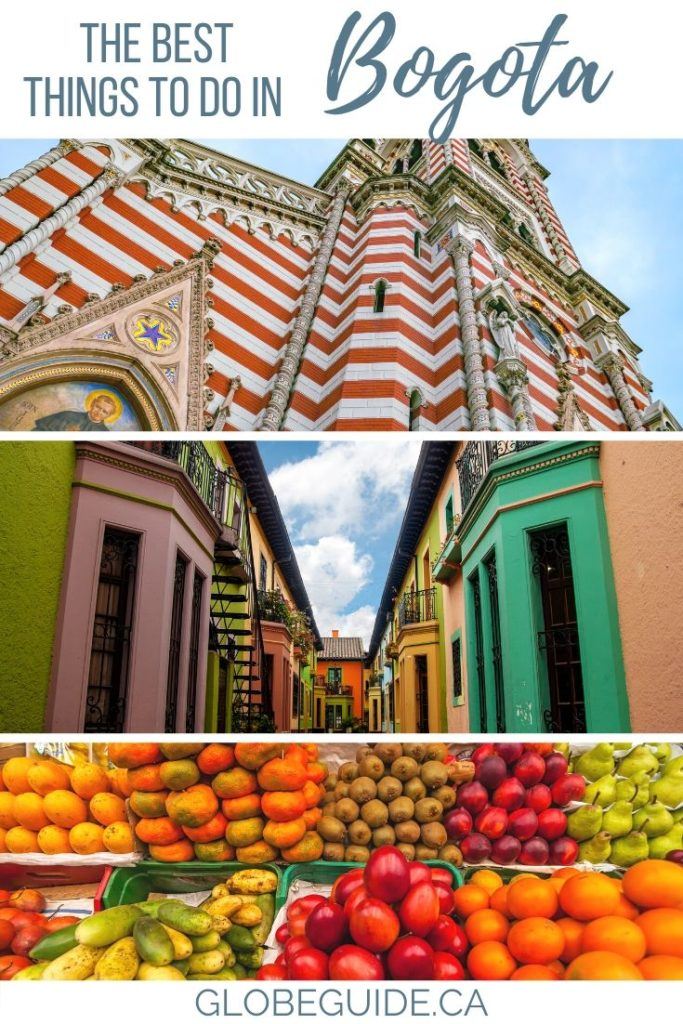 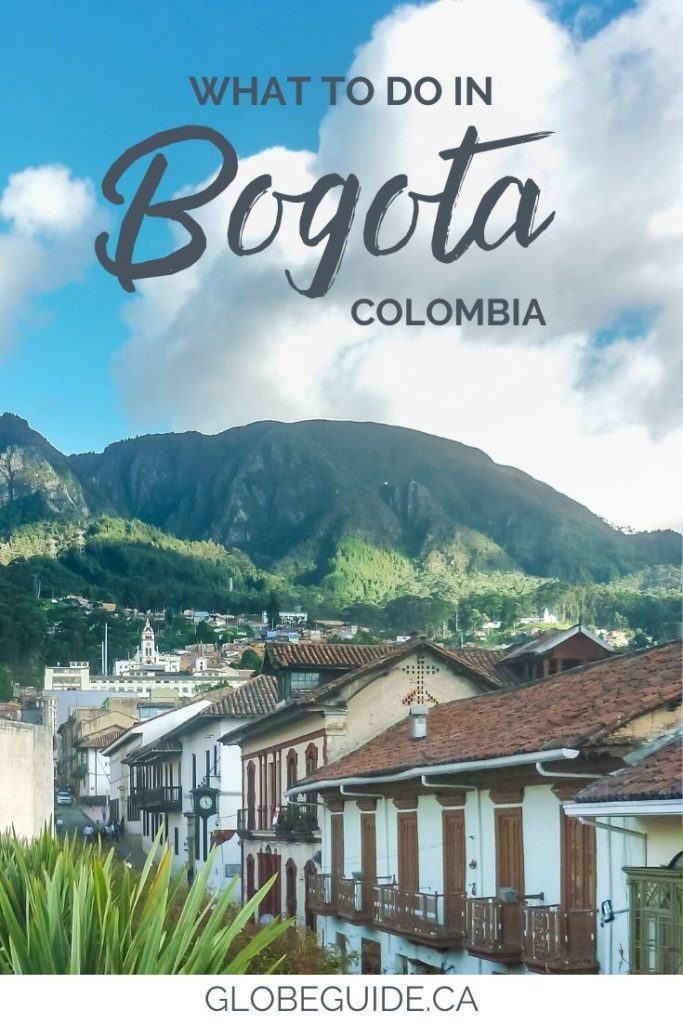