How to spend 2 days in Budapest, Hungary 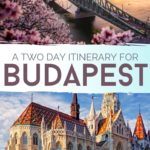 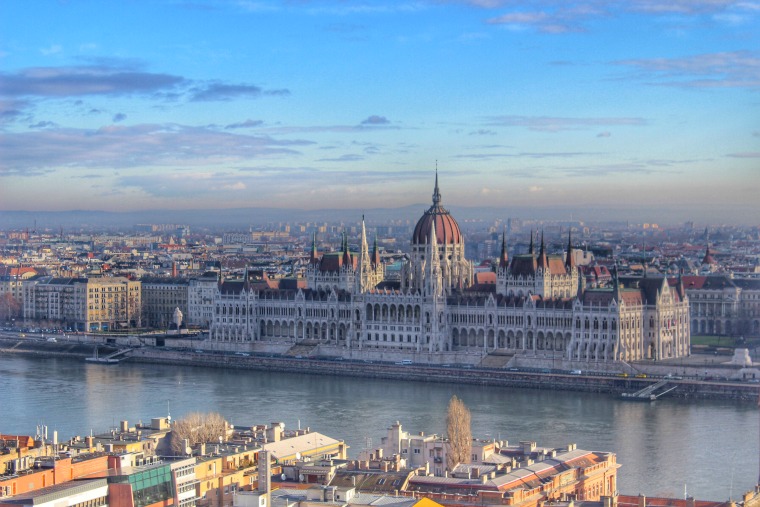 It’s the ultimate tease to fly all the way to some far-flung country, only to realize you have just a day or two to spend there. But whether the rush is due to a quick stopover, a planned port of call on a cruise itinerary or simply a lack of time, sometimes there’s no way around it.

Budapest, Hungary is one of those cities you’d never want to budget just a day for, as it seems to leave a mark on everyone who visits. From its rather dark history of constant takeovers to the unification of towns on either side of the Danube River (“Buda” and “Pest”), every street corner, bridge and towering monument seems to have a story to tell. Add to that the impression the cityscape makes on those lucky enough to see it at night, and it’s easy to see why Budapest casts such a spell. 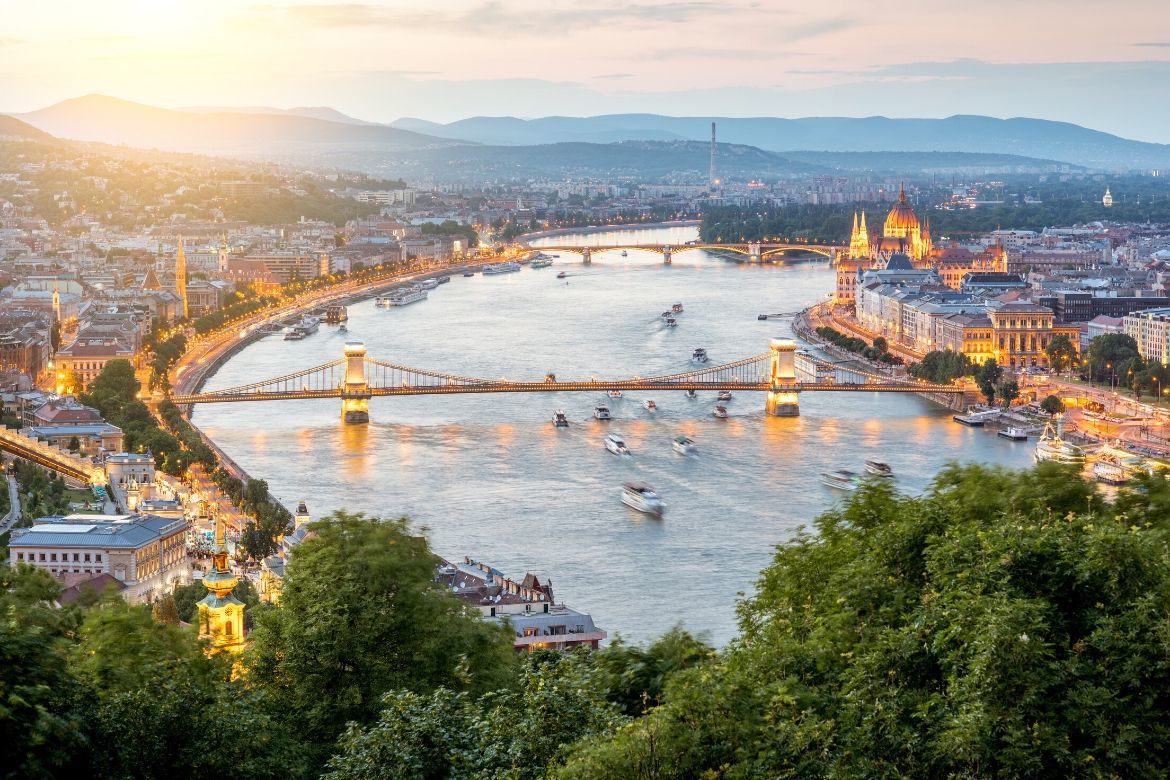 Those who are limited on time to explore the Hungarian capital should immediately rejig their plans (or book a trip back, stat!), but if there’s no way around it here’s the ultimate itinerary for making the most of only 2 days in Budapest. 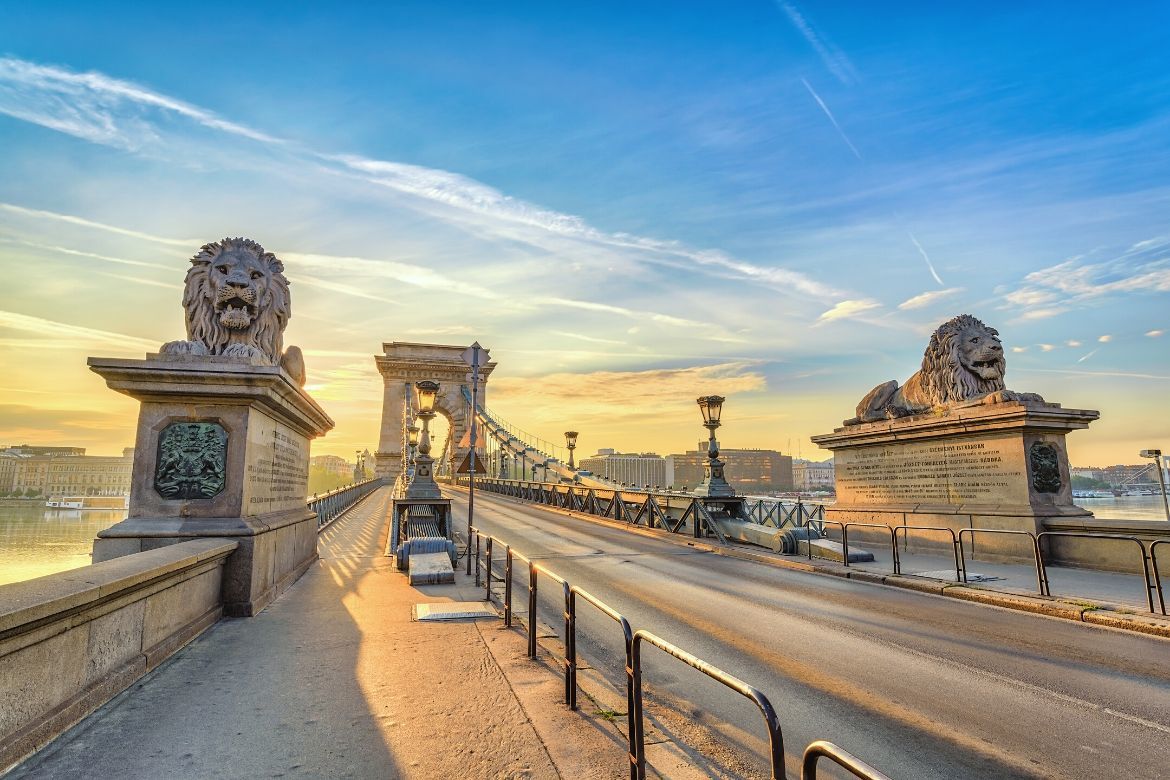 Kick off your two days in Budapest bright and early, with a pre-dawn dip in one of the city’s public baths. Budapest sits over natural thermal waters which are renowned for their healing properties, and Magyars (as Hungarians call themselves) take great pride in their famous bathing culture.

The iconic Széchenyi Thermal Bath has been one of the country’s most popular spots to soak for over a century, and is home to 18 pools including three massive outdoor pools complete with waterfalls cascading out of marble sculptures.

Széchenyi opens as early as 6 a.m., which is an incredible time to visit as you can enjoy the quiet of the morning while relaxing in the steaming water and watching the sunrise. Once you manage to pull yourself out, explore the rest of the complex which includes scorching saunas and steam rooms to heat you from the inside, icy plunge pools designed to increase circulation, and numerous spa services including massage therapy.

Explore the Pest side of Budapest

The rest of your first day in Budapest is dedicated to exploring the Pest side of the city, and it’s just a five minute walk from the Széchenyi Bath to the first landmark: Heroes’ Square (Hősök tere).

Located in an enviable position between the City Park (Városliget) and two museums, the giant plaza is home to the towering Millennium Memorial which is dedicated to national leaders and those who gave their lives for Hungary. 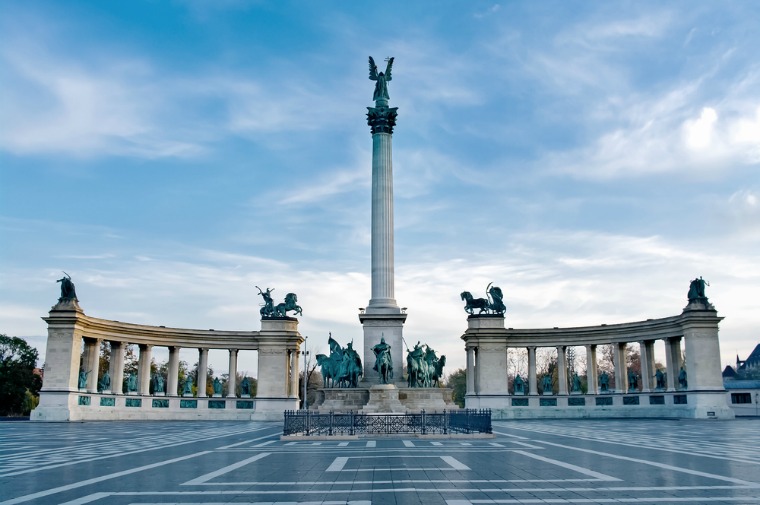 Just past Heroes’ Square is the beginning of Andrássy Avenue (Andrássy út) which is nicknamed “The Champs-Élysées of Budapest.” One of the city’s most exclusive spots, the beautiful tree-lined street hosts elegant townhomes, luxury boutiques like Louis Vuitton and Burberry, restaurants and cafes. Andrássy connects the City Park with the city centre, and has been designated a World Heritage Site.

While it’s a bit of a trek to wander the whole route, there are couple of notable spots along the avenue, including the aptly-named House of Terror. Both the Nazi and Soviet regimes held their prisoners for interrogation in the building, and even killed them. Torture techniques were also used such as covering all the windows so captives had no idea what day or time it was. Today it’s a museum dedicated to commemorate those dark periods of Hungarian history. 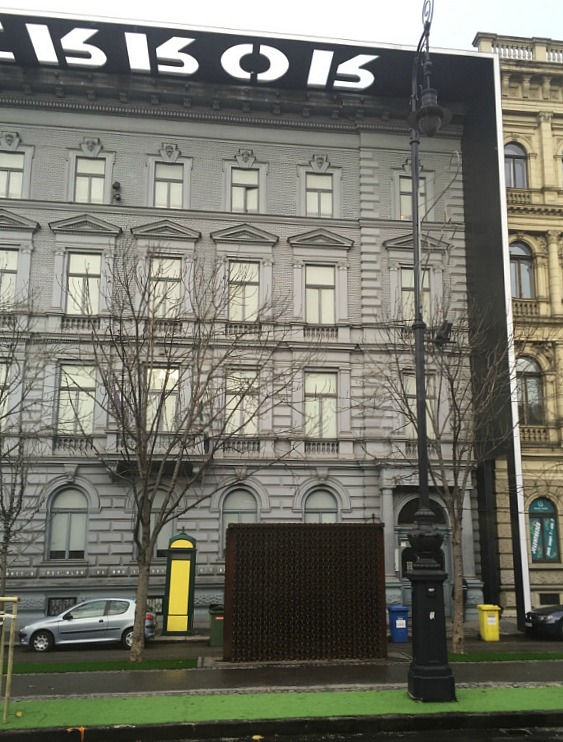 Outside of the House of Terror

Continuing along Andrássy, you’ll pass the State Opera House and St. Stephens Basilica before turning towards the sprawling Jewish Quarter. Home to one of the largest synagogues in the world (second only to one found in Jerusalem), it also has a museum, temple, cemetery and memorial the commemorate the Hungarian Jews killed in the Holocaust as well as those who tried to save them. Walking tours of the Jewish Quarter are very popular, which is a good add-on if you have enough time to include one on your Budapest 2 days itinerary. 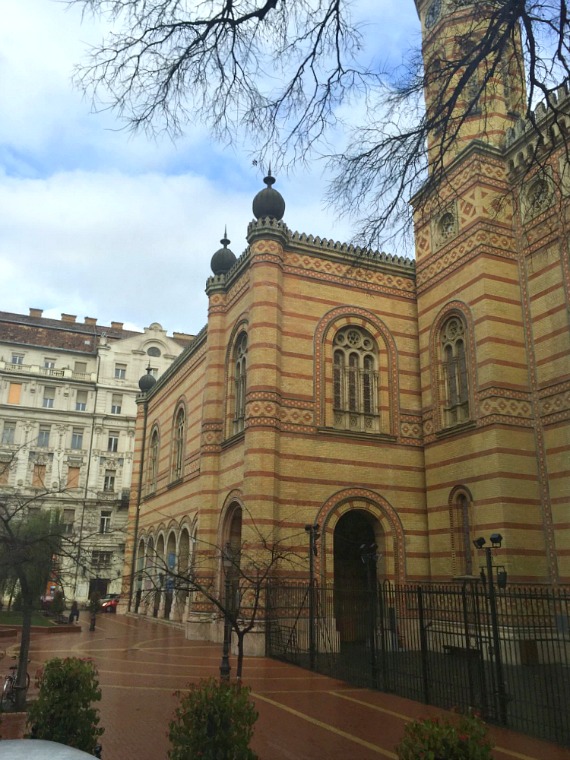 All that sightseeing means you’ll have worked up an appetite, so hop in a taxi for the 10 minute drive to the New York Cafe in the Boscolo Budapest hotel for lunch. It’s earned the moniker of the “Most Beautiful Coffee House in the World” thanks to its opulent Renaissance-style dining room, and serves up local specialties like goulash and schnitzel. 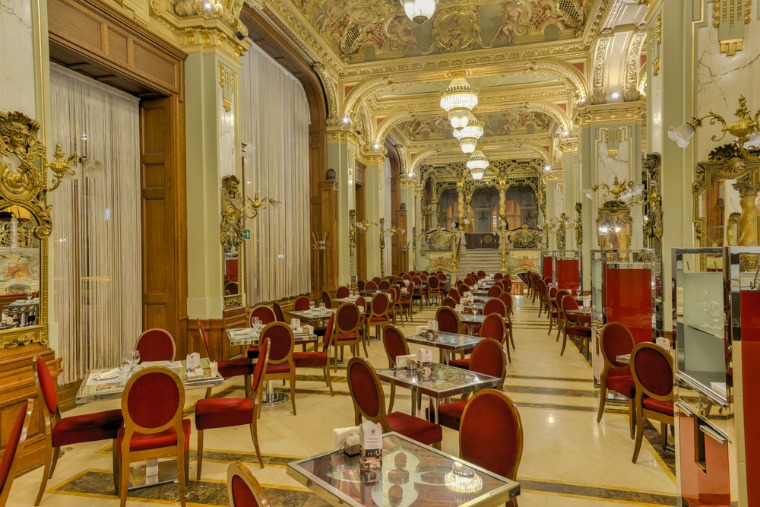 Once you’ve got your fill, head back toward the river for some shopping along the pedestrian-friendly Váci Utca, which is one of Budapest’s most popular streets. Sure, it can be overrun with tourists, but that’s because it’s chock-full of clothing stores, cafes, souvenir shops and galleries.

It connects to Vorosmarty Square, which you’ll want to make a beeline for if you’re visiting during the holiday season, since it hosts the city’s best Christmas market which is one of the best things to do in Budapest in December. 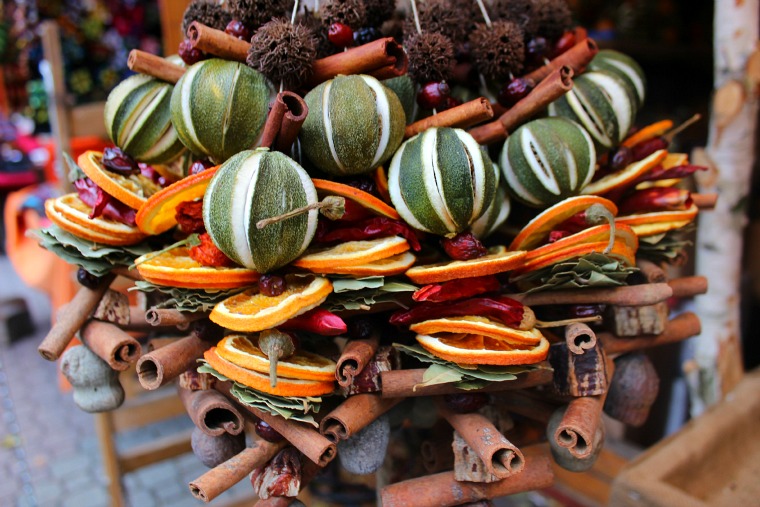 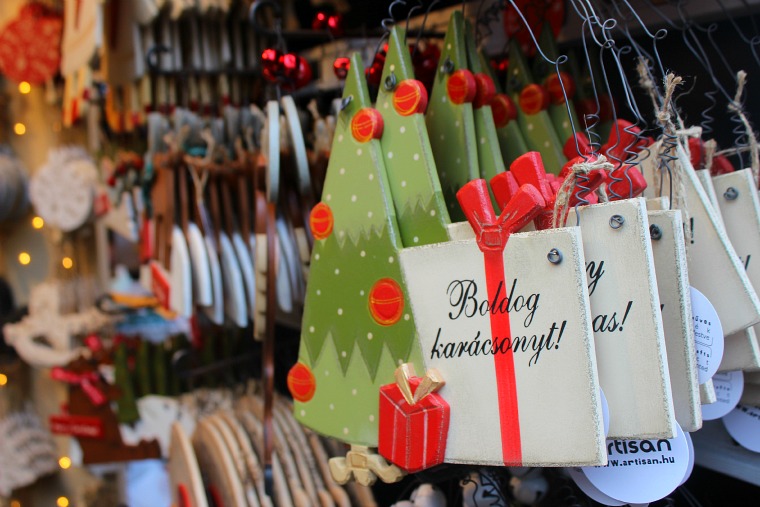 Váci Utca runs parallel to the Danube, and eventually leads straight to the colourful Great Market Hall. Take a moment to admire the intricate patterns that adorn the facade and roof, before heading inside the enjoy the sights and smells of the market. Spanning two levels, there are hundreds of stalls with local vendors selling everything from spicy sausage and fresh vegetables to handmade jackets, matryoshka dolls and leather goods. 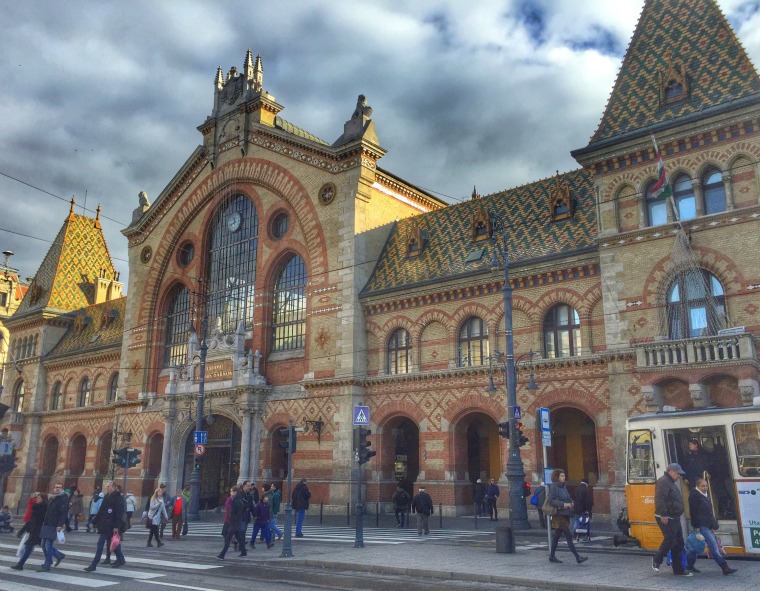 One of the best things to do in Budapest at night is taking in the enchanting view of the city after dusk, so book a dinner cruise to see the spectacular scene from the water.

As your boat traces the path of the Danube, you’ll slowly glide under seven distinct bridges, affording a close up look at the sculptures adorning the sides of the Chain Bridge. Twinkling strings of lights wrap around each structure, illuminating them for all to see from miles away. 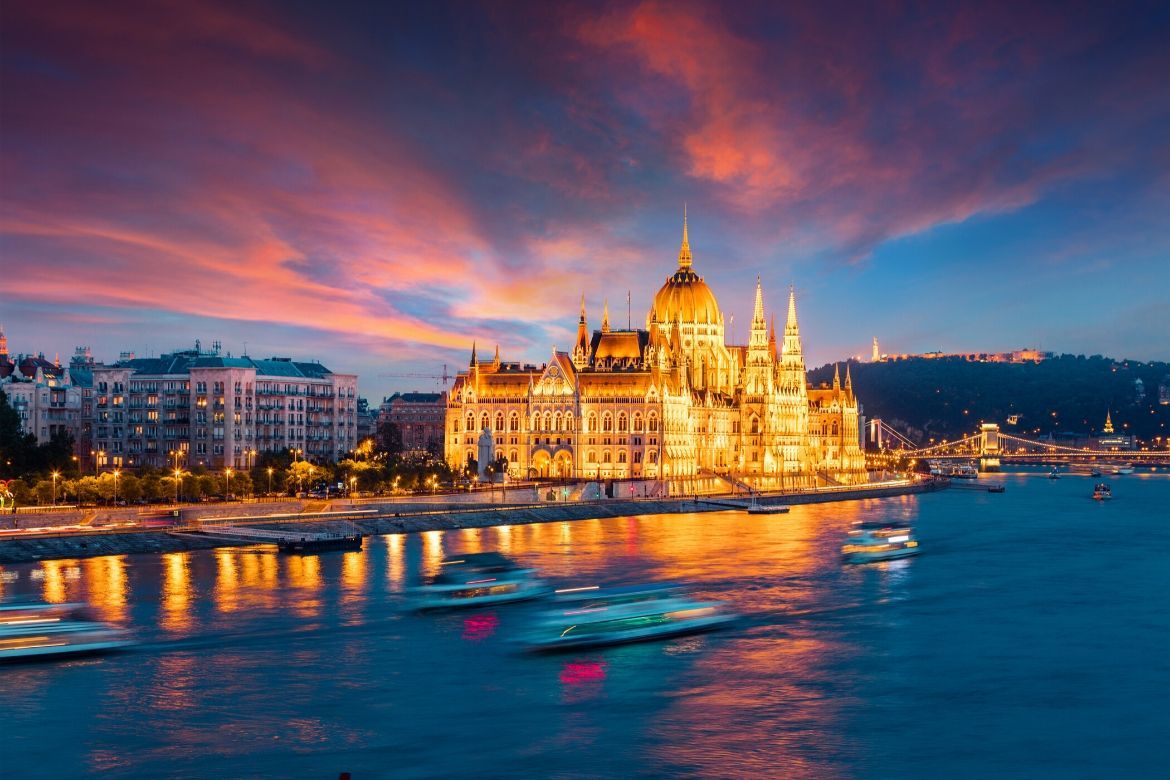 Then finally, it comes into view: the iconic Parliament Building. Stretching 315 feet high with spectacular domes, its entire facade emits a golden glow which perfectly reflects off the dark water of the Danube. It’s safe to say you’ll be spellbound—which is the perfect way to cap off the first of your 2 days in Budapest. 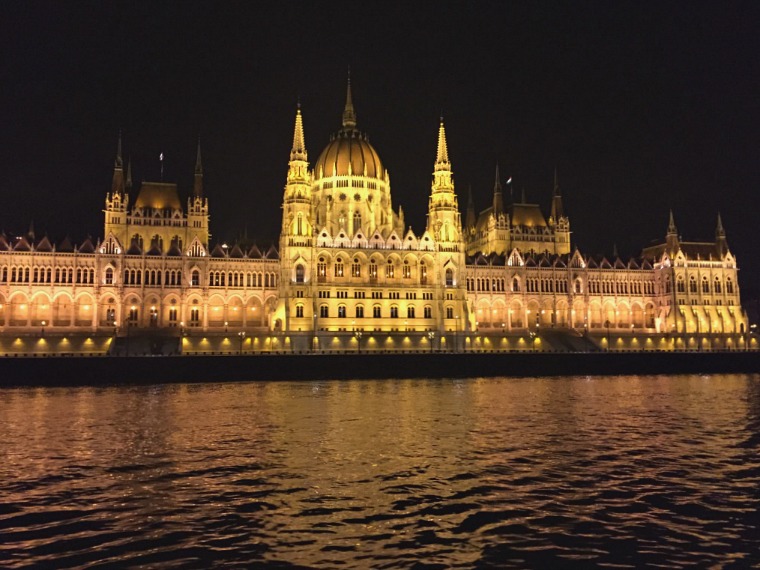 Visit the Buda side of Budapest

To visit Budapest in 2 days, start your next day off by crossing the Freedom Bridge, and you’ll find yourself on the city’s historic Buda side (which is where those heading off on a cave tour will meet- yes, you can do that here!). 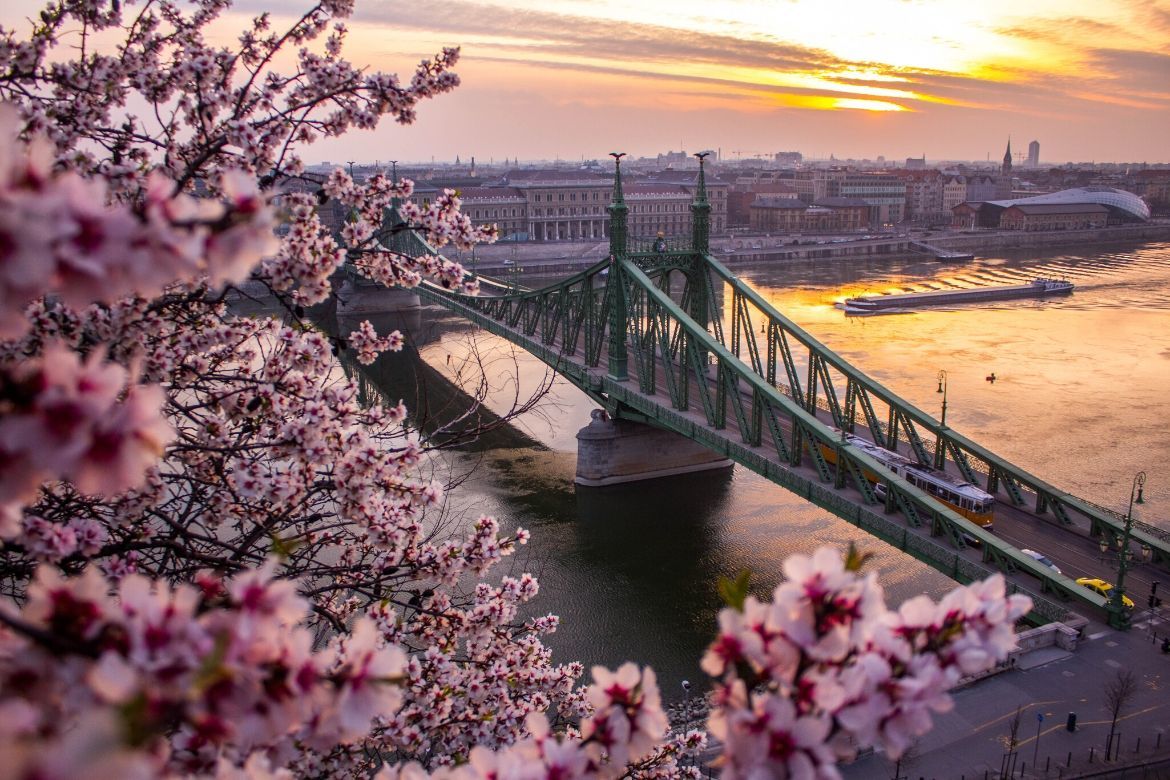 Following the winding river, look up as you pass Gellert Hill and keep your eyes peeled for the Liberty Statue which looks down over the city. A quick drive brings you to the bottom of Castle Hill, where you can either continue up the winding road or hop on the funicular to get to the top. 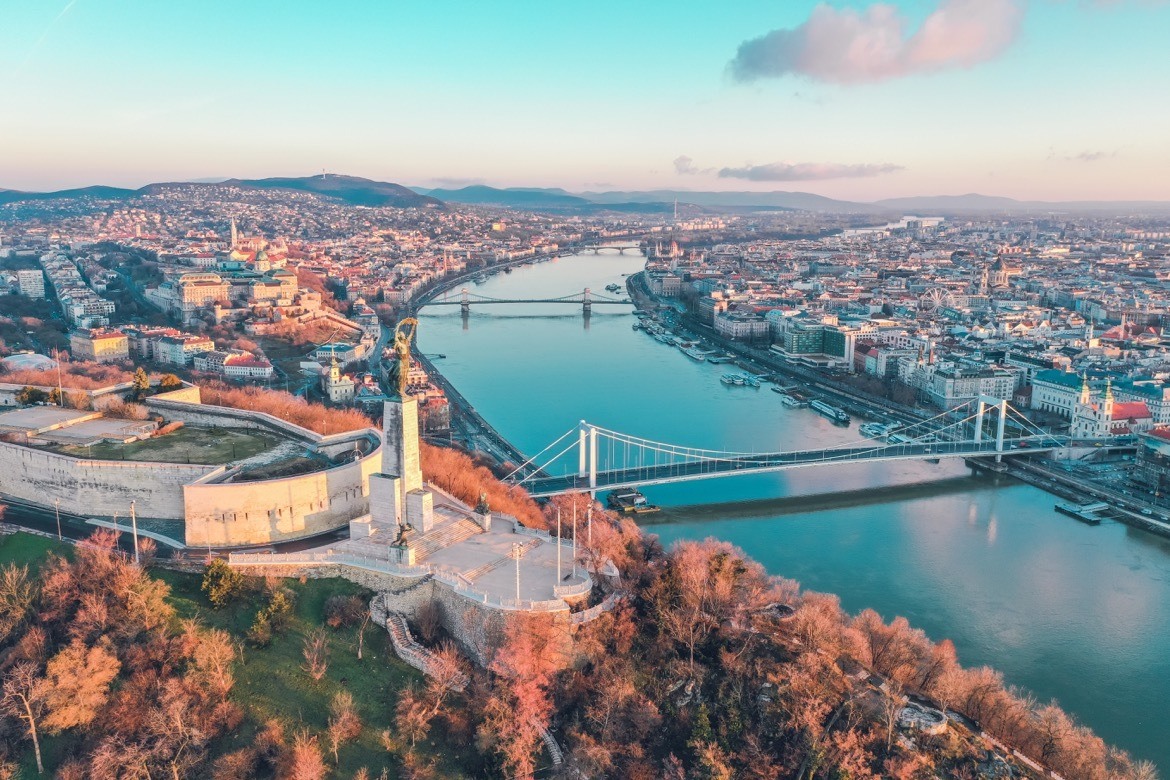 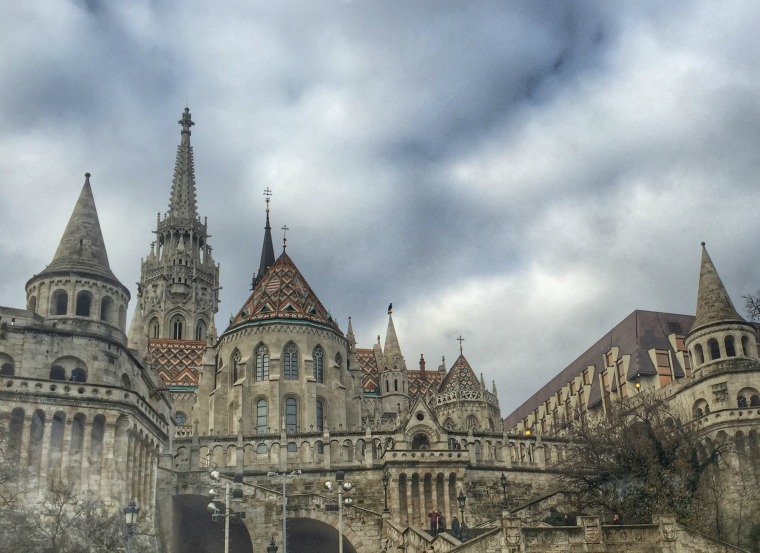 The Castle District and Fishermans Bastion

The castle district is home to a number of sprawling, impressive buildings including the National Gallery and Royal Palace, which is essentially Hungary’s version of America’s White House.

Continue over to the pristine, cobblestone area which is home to Buda Castle, towering Matthias Church and the Fishermans Bastion which protects both from the cliffside. This is where you’ll find the best view in the entire city, no contest, and best of all it’s completely free. 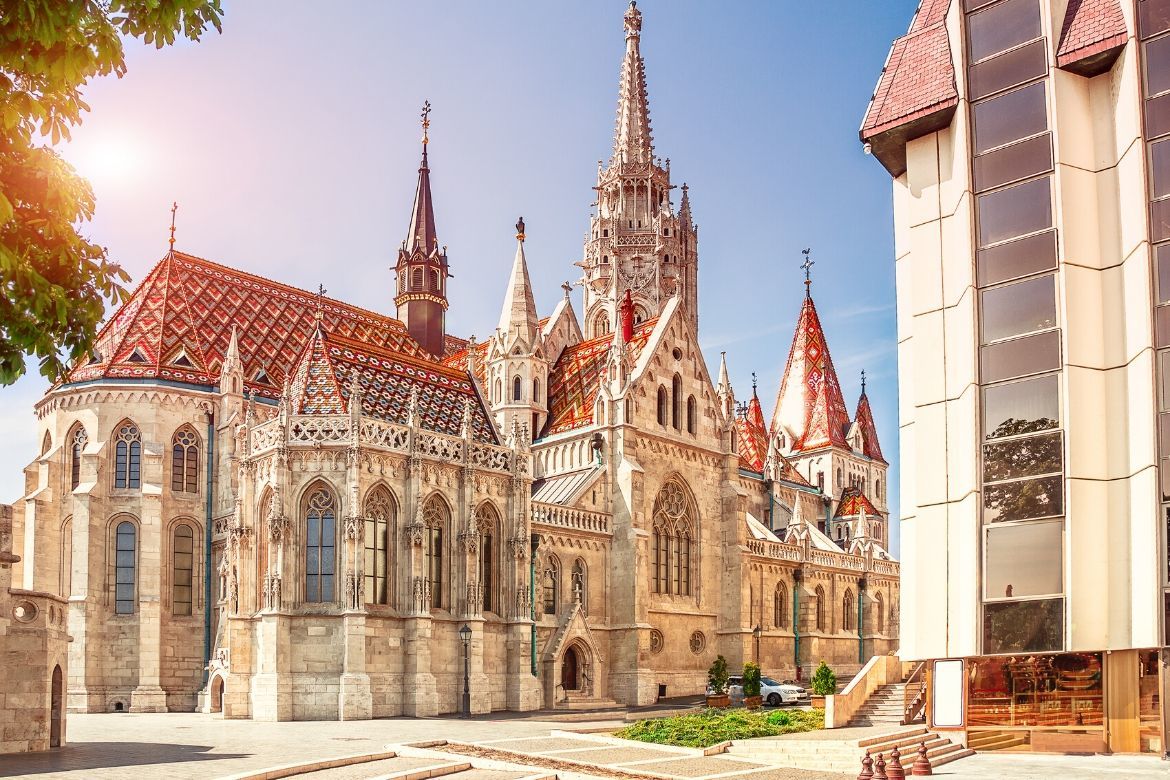 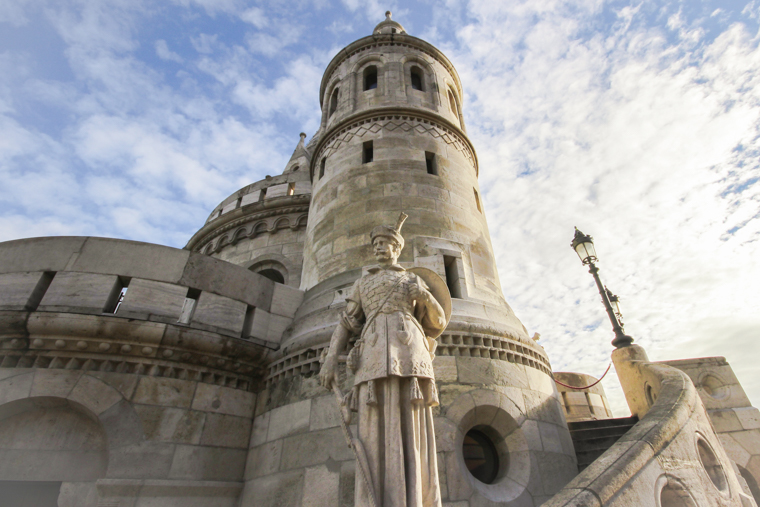 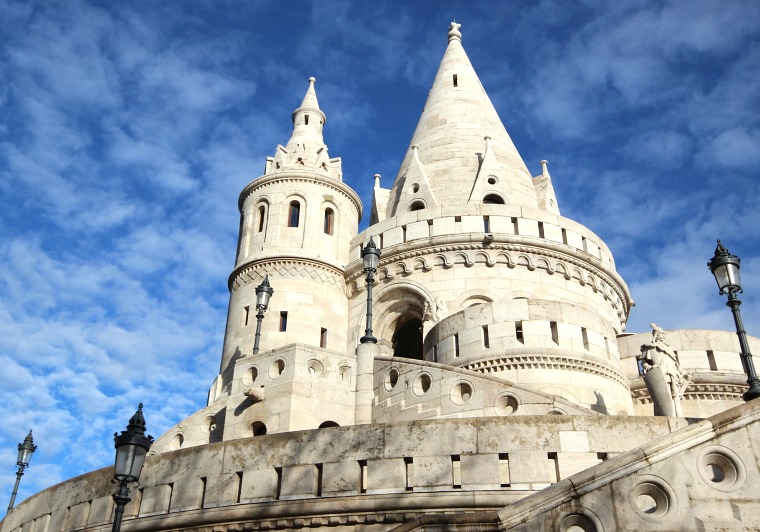 You’ll want to budget at least a couple of hours to explore the scenic spot, head inside the church, and pop into one of the nearby restaurants or souvenir shops. 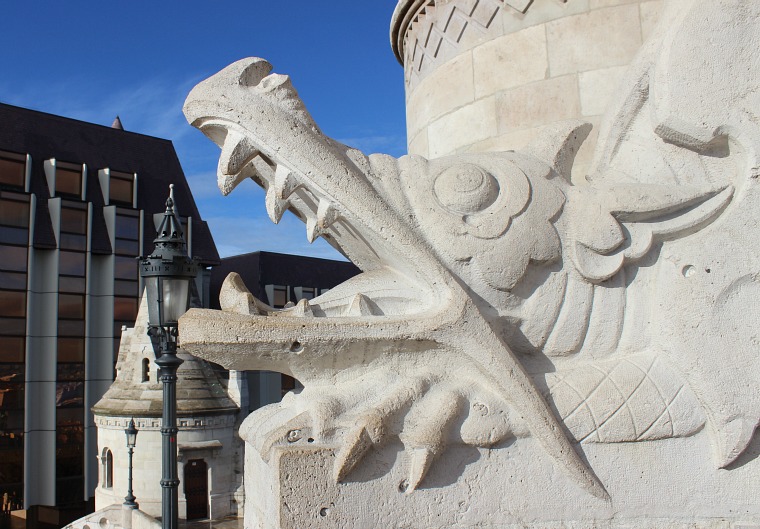 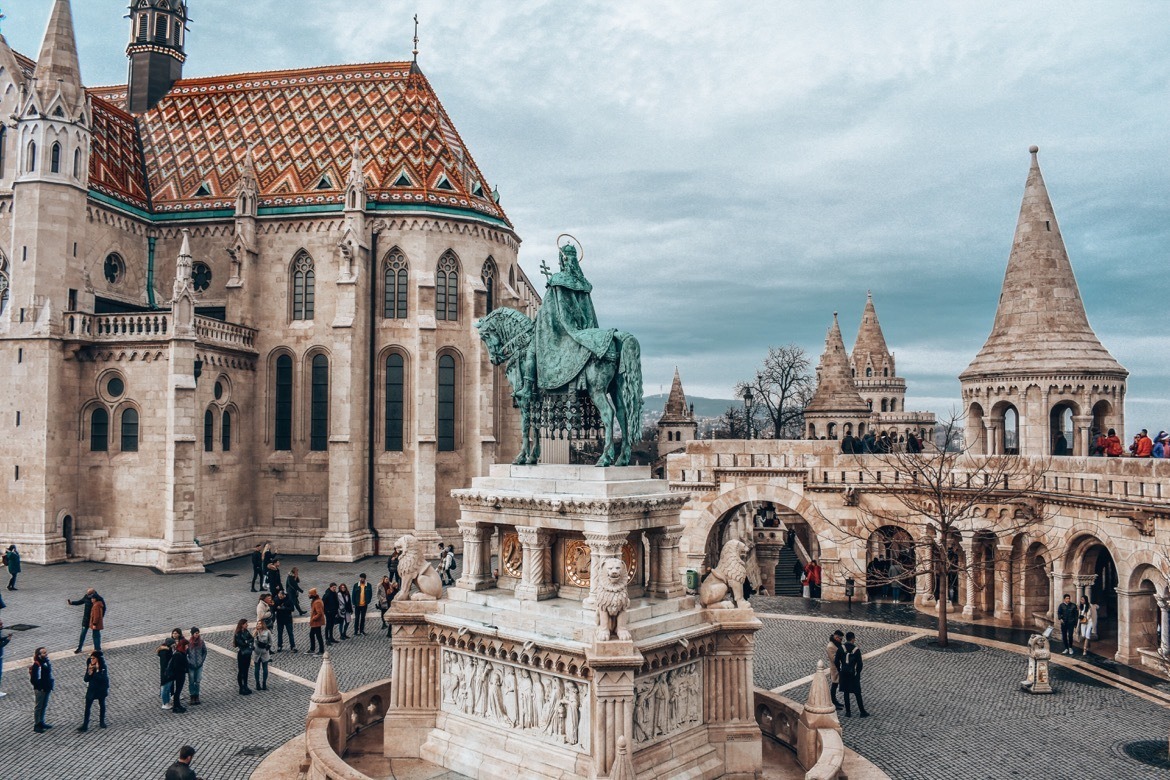 Once you manage to tear yourself away from what is arguably one of the best things to see in Budapest, spend your afternoon heading all the way back down the hill and crossing over the Chain Bridge, which is one of the city’s most photographed bridges. You’ll find yourself back on the Pest side, and a five minute walk will bring you to the Parliament Building and a sombre memorial in front: Shoes on the Danube Bank. 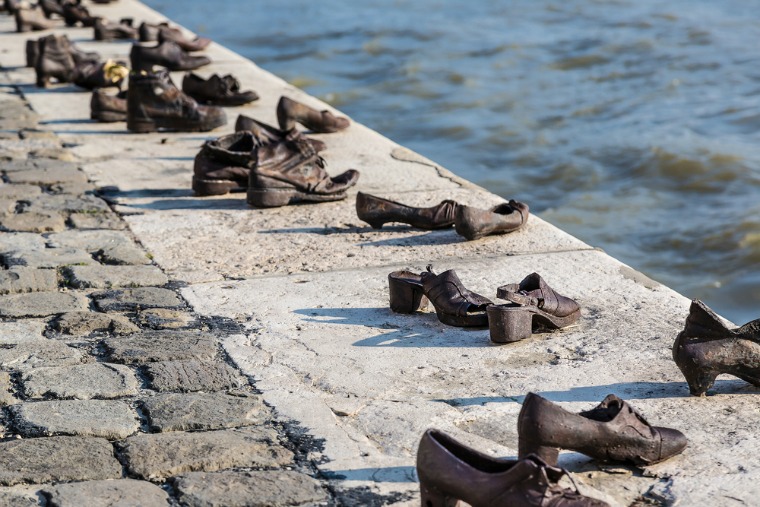 Shoes on the Danube Bank

60 pairs of rusted iron shoes have been affixed to the concrete boardwalk, to pay tribute to the Jews who were rounded up during the Holocaust, brought to that same spot, and ordered to strip naked. They were then shot by a firing squad, falling into the river to be washed away. 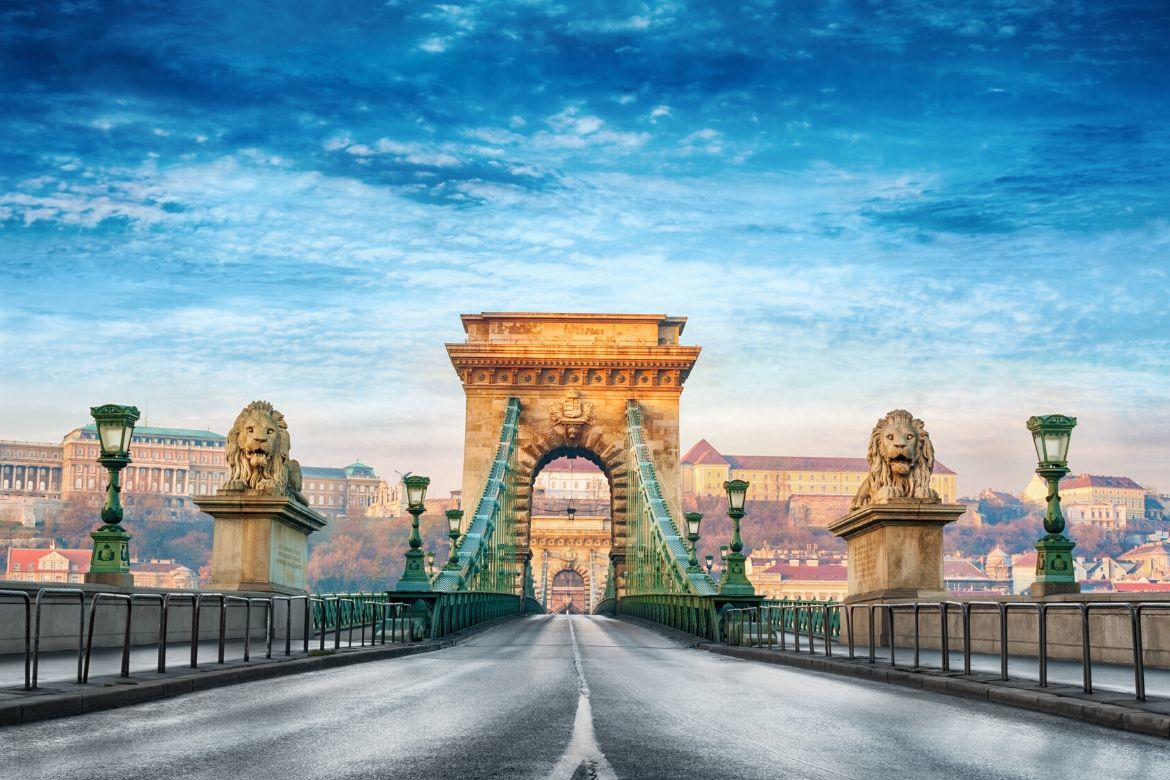 Cap off the day with a happy hour tour through some of the city’s coolest local hangouts and Budapest ruin bars. Your guide will take you to some quirky spots in the Jewish Quarter and 7th district to share stories about the city’s history, while sampling spritzers and wine in underground cellars and pubs.  Click to book

Enjoy a nightcap at one of the ruin bars in Budapest, which look like nothing more than old homes or abandoned factories from the outside. But once you get through the courtyard, you’ll find a quirky hangout spot complete with flea market furniture, thumping music, bartenders slinging drinks and even lively dance floors. They’re funky, fun, and a great way to finish your two day Budapest itinerary. 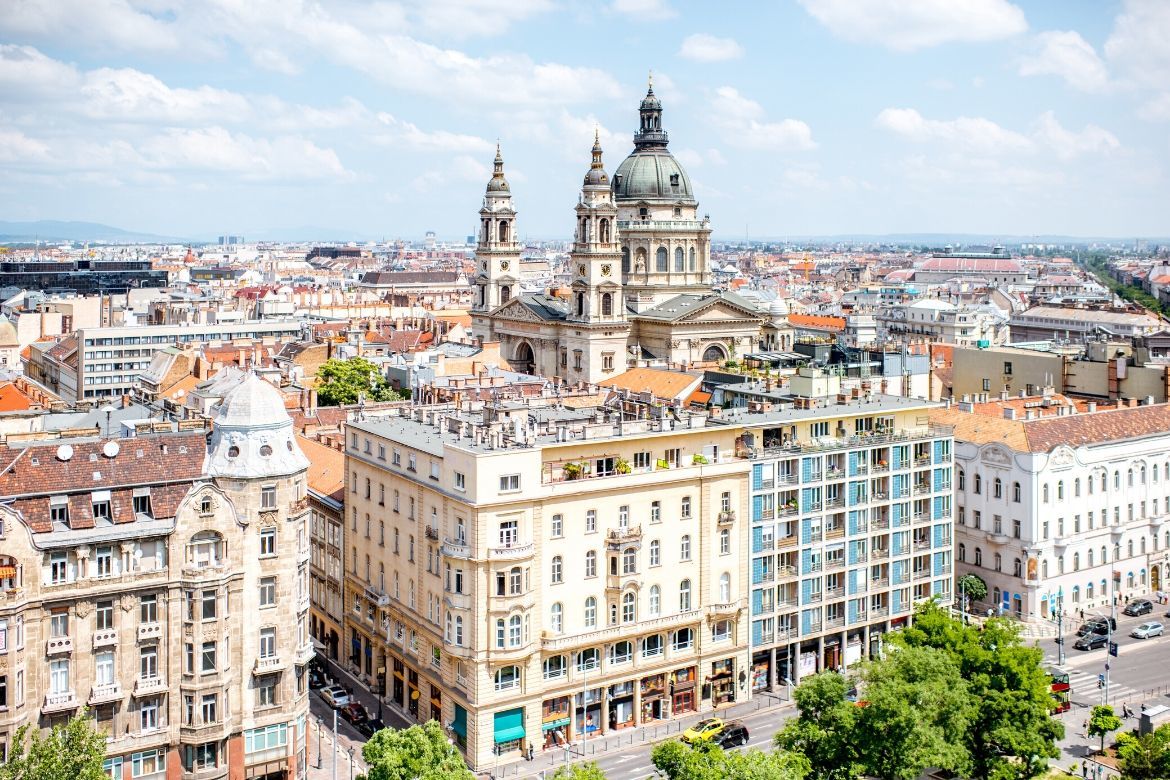 Tips for spending 2 days in Budapest

Currency: The Hungarian currency is the forint, but euros are commonly accepted as well as major credit cards.

Getting around Budapest: Budapest’s subway and tram system is very easy to use, and only costs about $1.50 per ticket. Alternatively, book this hop on/hop off tour which is good for 48 hours will take you directly to all of the main sites and includes a river cruise. Click to book

Don’t miss: It’s a rather well-kept secret, Hungary actually has some incredible wines. Try one of the sweet white wines, crafted in the region of Tokaj, or take a day trip out to the vineyards to sip samples from three different wineries. Click to book 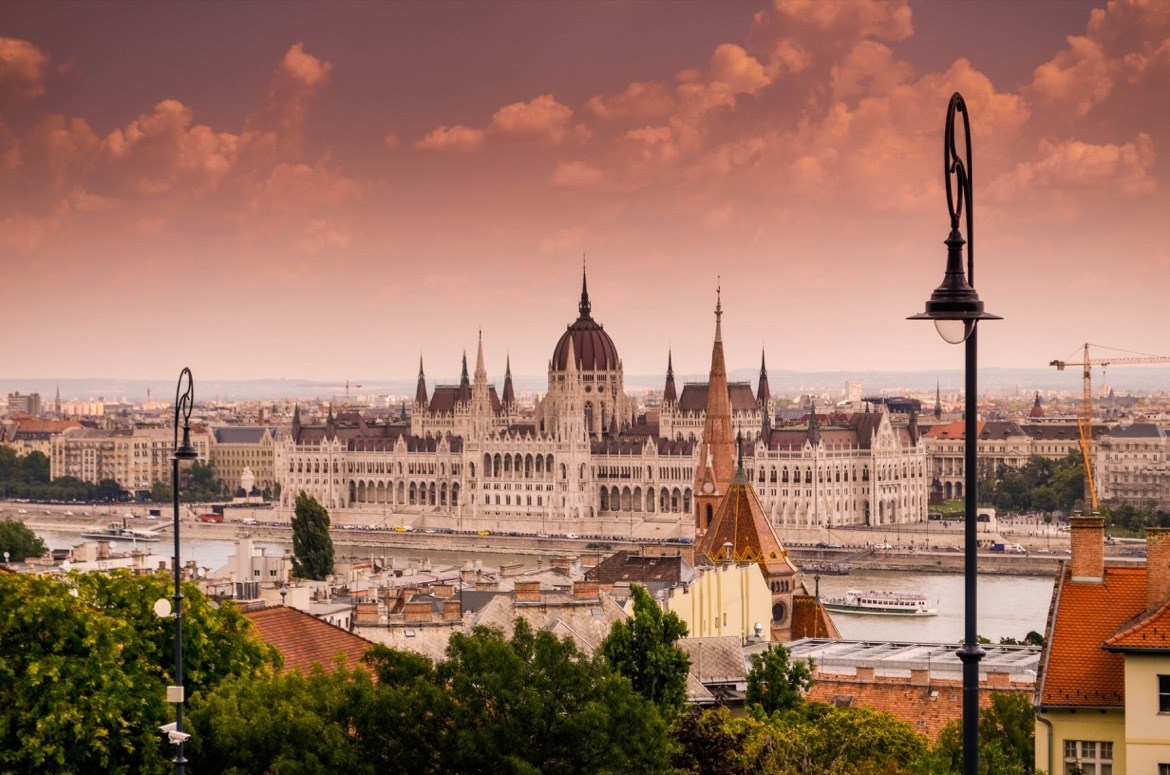 Have 3 days in Budapest?

You might want to consider one of these great day trips to explore more of the Hungarian countryside, like wine tasting, scenic hikes up the Danube Bend, seeing the traditional horse show in Puszta and relaxing on the shores of pretty Lake Balaton:

Where to stay in Budapest 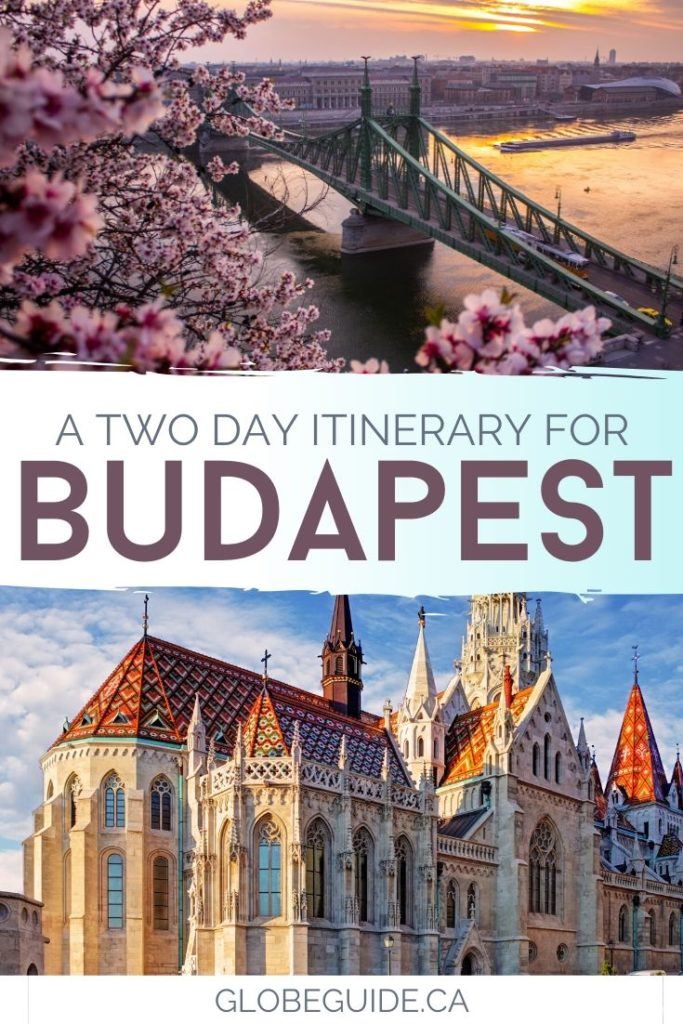 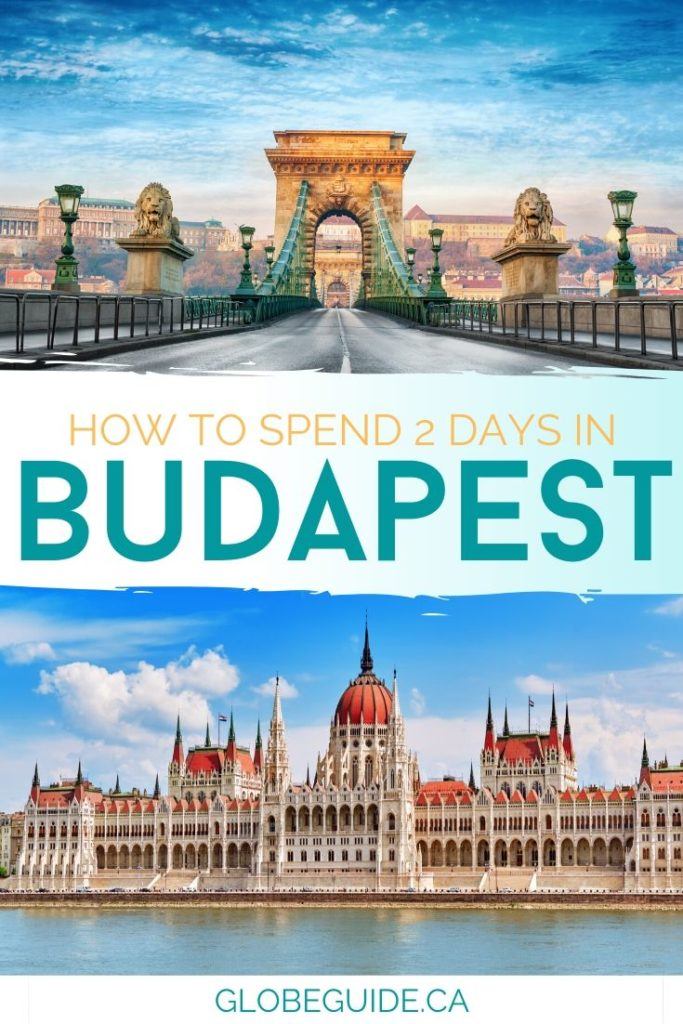 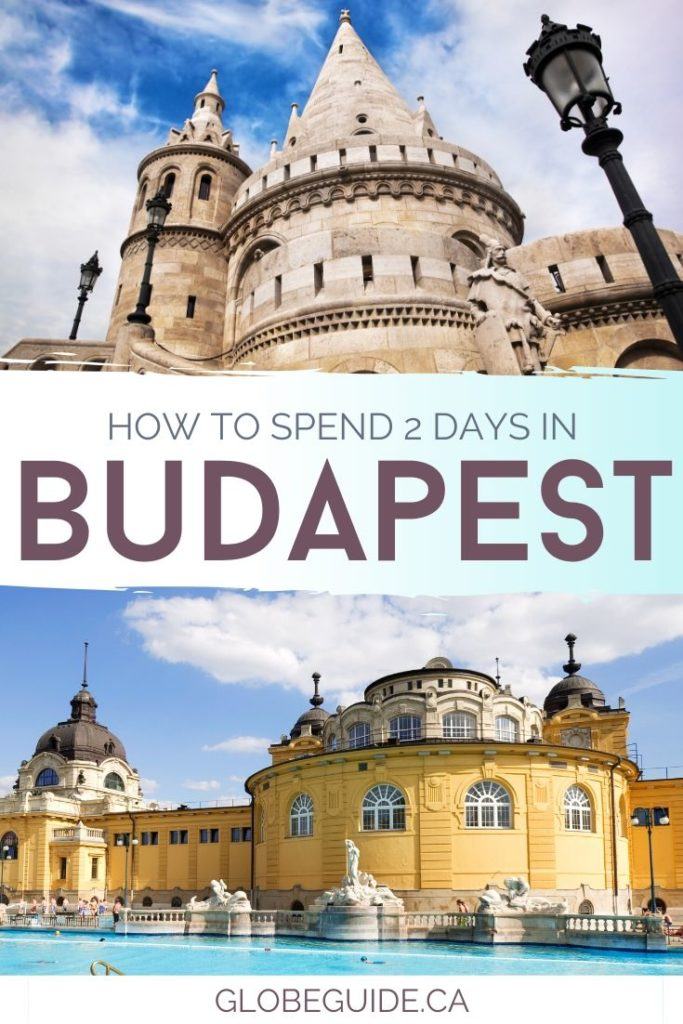