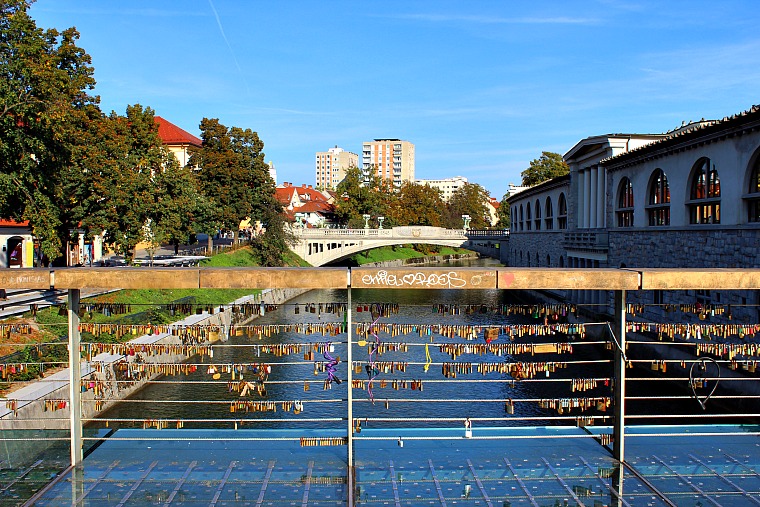 Hard to spell but easy to fall in love with, Ljubljana is one of those fantastic cities that has inexplicably managed to stay off the radar of the typical tourist throngs, yet has loads to offer those who make the trip. Pronounced ‘Loo-blee-ah-nah’, Slovenia’s capital city boasts great weather, historic architecture, a buzzing social scene and young residents so fashionable that you’d think they’d just stepped off a catwalk in Paris. Its location in the centre of the country makes Ljubljana a great base for exploring the rest of Slovenia, and the well laid-out city centre means it’s easy to see the highlights in just one day. With that in mind, here are the top five things to do. 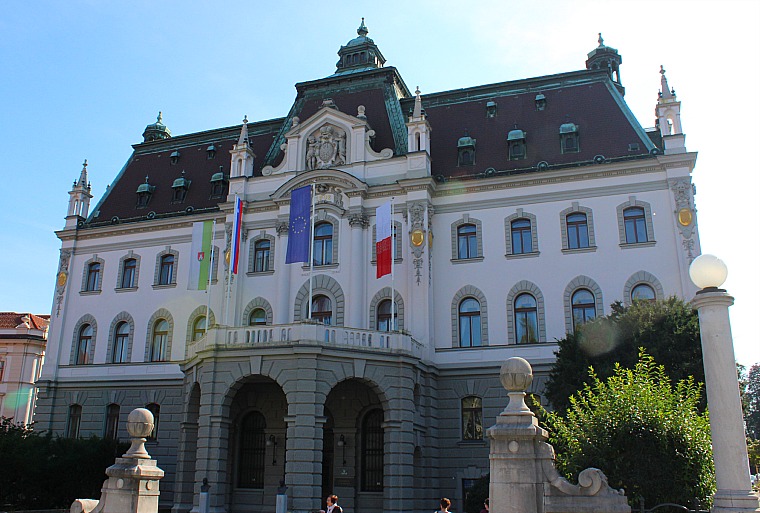 Without question, the city’s crown jewel is Ljubljana Castle, which towers high on a hill overlooking the city. Ljubljana Grad draws over one million visitors per year, who take the funicular or trek up to the medieval fortress to enjoy million dollar views. The complex includes a courtyard, chapel, coffee house, viewing tower and exhibitions depicting the castle’s history. There are also two fantastic restaurants, including Strelec Restaurant which is located in the beautiful Archer’s Tower. Not only is the candlelight ambiance incredible, but the traditional cuisine is cooked to perfection and paired with Slovenian wines. 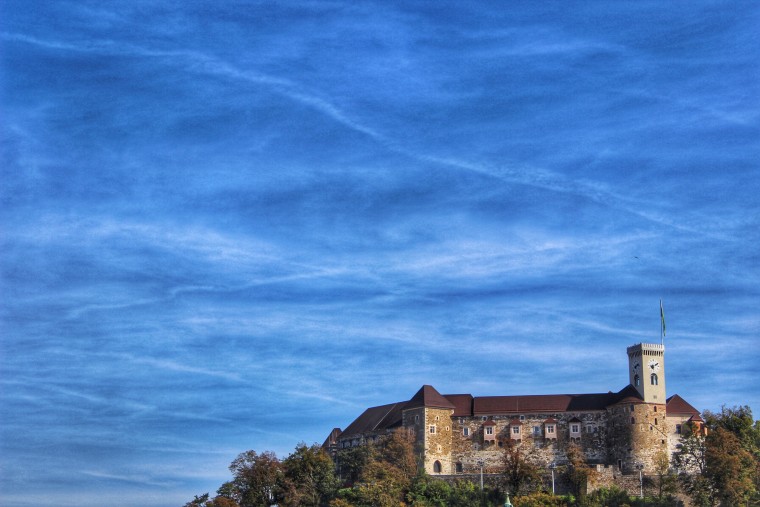 From the castle, head back down to the walkable old town where all the action is. Kongresni trg square is surrounded by leafy green trees and often hosts exhibitions or events, making it a great place for people watching. It’s just steps away from Uršuline Church, which was built in the 1700s and is home to a number of works of art. 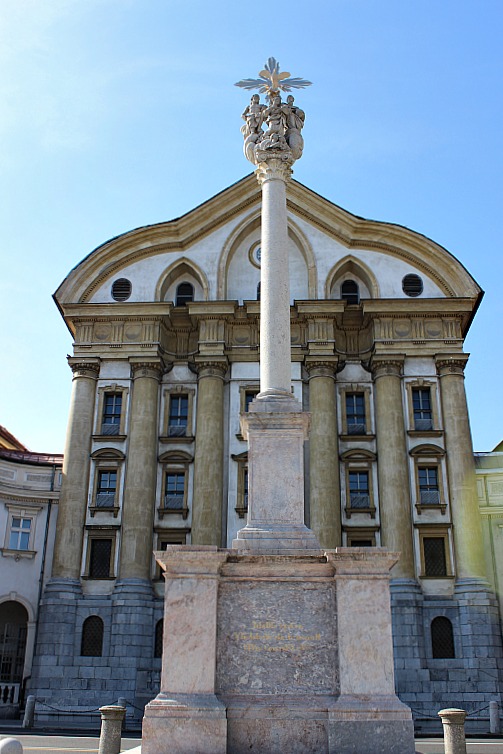 The crowd-pleasing Franciscan Church is also nearby, and hard to miss thanks to its bright pink facade. It overlooks Presernov Trg square, a busy pedestrian area lined with shops and cafes that also holds some beautiful statues. 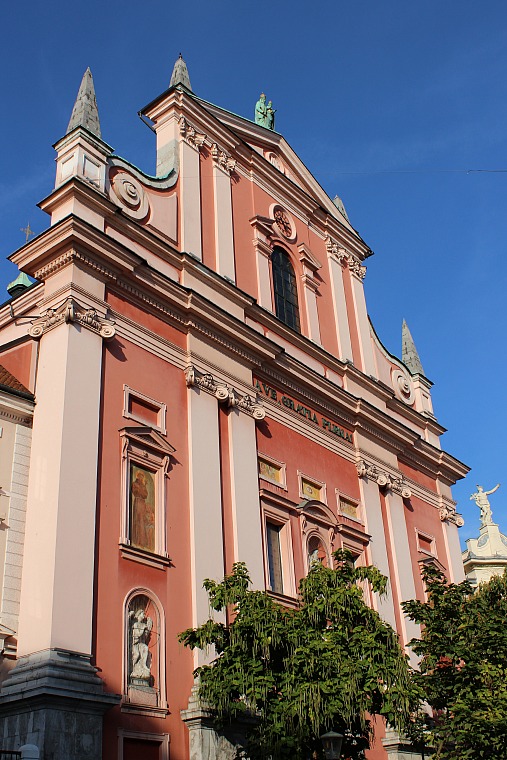 From there, a quick jaunt in any direction reveals old churches with ornate doors, pretty fountains and centuries-old buildings that face the winding Ljubljanica River. Don’t miss the Robba Fountain, a Baroque monument depicting three river gods. It happens to be right beside the town hall, which was built in the late 15th century and has Venetian influences. 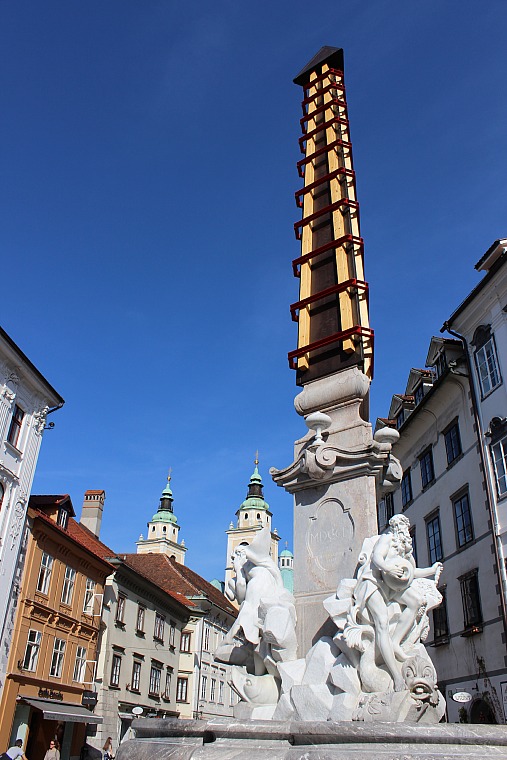 Track down some dragons

One thing that quickly becomes apparent in Ljubljana is how much they love their dragons. Symbolizing courage and strength, those grand, green dragons have been integrated into the city’s coat of arms, and as a result they’re found all around Ljubljana, whether they’re decorating a laneway, on top of the castle or guarding a bridge. To really spice up your visit, why not turn dragon sightings into a drinking game?! OK, probably a bad idea… 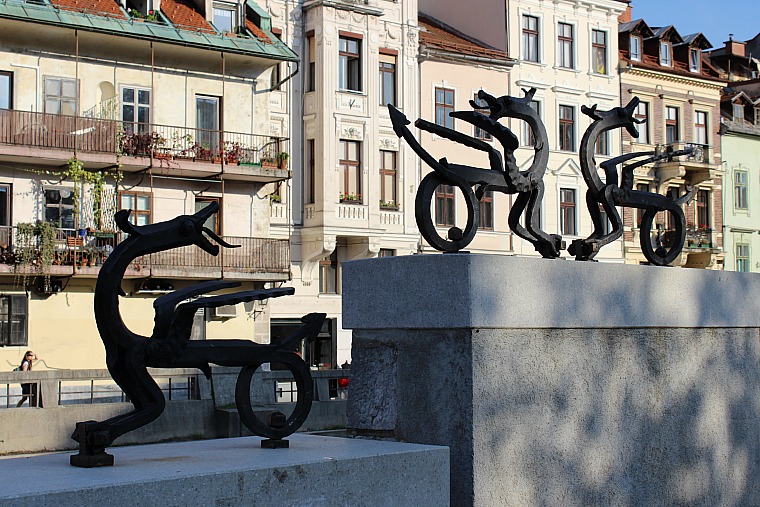 Along with dragons, Ljubljana has a thing for bridges thanks to the river that cuts right through the centre of the city. Fortunately they made the most of their infrastructure budget, and each bridge that links the two sides is a work of art and completely unique. The Triple Bridge (Tromostovje) is the first one that many visitors come across, as it’s just off Presernov Trg square. Living up to its name, the Triple Bridge is made up of three identical bridges located side-by-side, and is a popular spot for photographs. 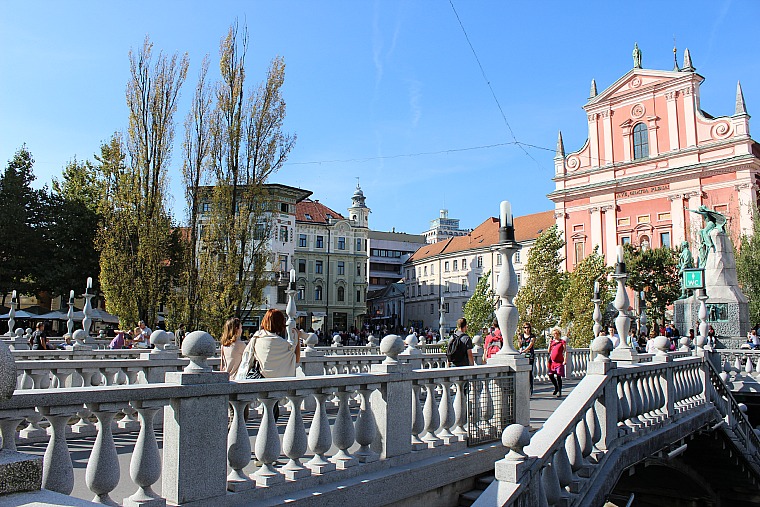 The Butcher’s Bridge is another favourite, and not only because it offers fantastic views of the building facades that line the river. It is lined with sculptures depicting the history of the surrounding area which used to be lined by market stalls, and is also a go-to spot for couples who fasten love locks to the bridge (similar to the famous one in Paris). Locks can be purchased at nearby souvenir shops, or in a pinch just sacrifice your bike lock for the cause. Yes, someone actually did that. 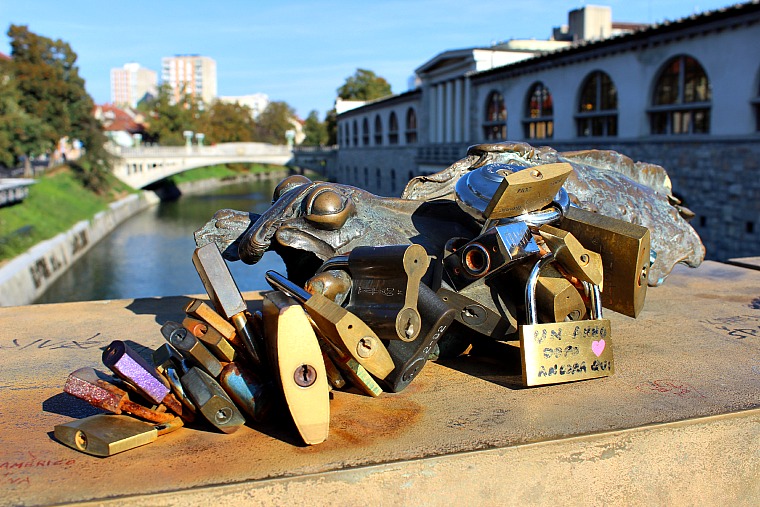 By far the most famous bridge in Ljubljana is Zmajski most, AKA the Dragon Bridge. The saying goes that if you don’t get your photo beside one of the four massive dragons that guard each side of it, you didn’t see Ljubljana—so clearly this is a must-see! 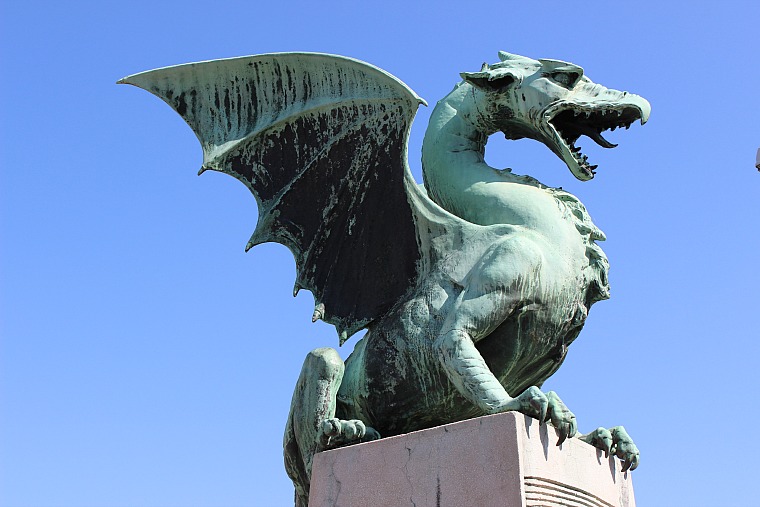 It’s worth noting that you there’s another way to see all of the bridges without hoofing it around town: on a boat tour. Typically lasting one hour, the trips cruise along the Ljubljanica River, offering a unique perspective of the city. Some also offer hop on/off options which make it easier to explore the surrounding areas.

Soak up the café culture

No contest, the best way to spend a sunny day in Ljubljana is relaxing at a riverside cafe. The embankments are lined with cafes that spill over into the cobblestone streets, serving up everything from strong coffee and crisp white wine to frozen drinks that are slathered in ice cream. Sometimes referred to as the city’s ‘lounge’, people gather here to catch up with friends over a lazy lunch, get their afternoon java fix or grab drinks before a night out—and chances are they have a cigarette in hand the whole time. 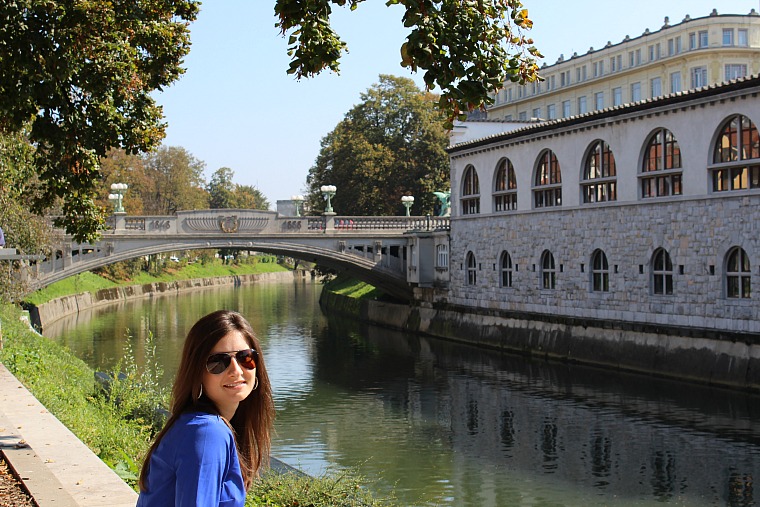 Hangin’ by the river…

Relax in the great accommodation

After a long day of sightseeing, hotels can offer a welcome respite, and fortunately Ljubljana has some great options to choose from. The #1 ranked hotel in the whole city is the swanky Hotel Cubo, located a stone’s throw away from Kongresni trg square. Boasting huge, modern rooms, friendly staff and a great breakfast buffet, it’s no wonder this is a popular spot for jet-setters. Top tip: reserve a room that faces east, to enjoy the unobstructed views of Ljubljana Castle. 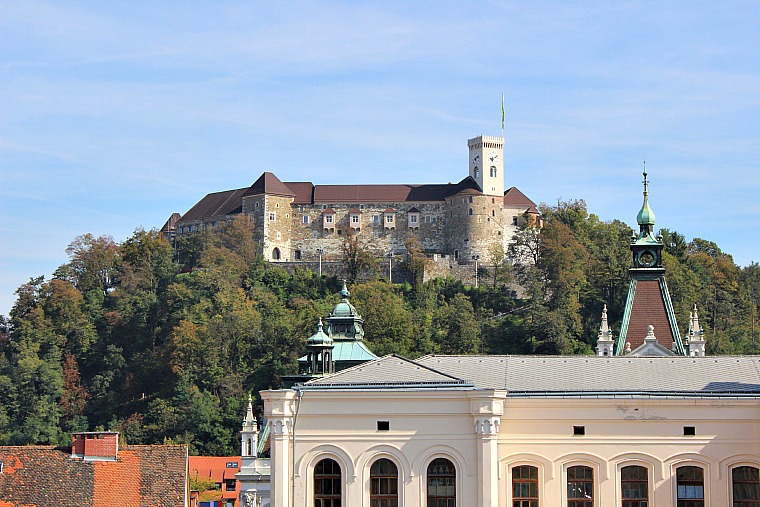 View of the castle from Hotel Cubo.

Those who are on a more conservative budget will want to nab a room at Hostel Celica, the self-proclaimed ‘hippest hostel in the world.’ Fashioned out of a former military prison, the rooms have been revamped with the work of dozens of artists, but still include the cell bars on the doors and windows. One room has even been turned into a space dedicated to different world religions, and there is also a restaurant on site.

Getting there: Thanks to its proximity to Italy, Croatia and Austria, many people arrive in Ljubljana by vehicle. If you’re driving, be sure to get a vignette (a sticker available at gas stations and post offices, at a cost of 7.50E per week) otherwise you could be slapped with a hefty fine.

Adria Airways is Slovenia’s official airline which connects with much of Europe, but be warned their planes are small and you could end up paying dearly if you have to check your carry-on bag.

Top tip: If you’re looking to grab a quick lunch and are short on cash, head to Back Werk. There are a number of locations near the old town where you can easily grab a delicious, ready-made sandwich for only a couple euros.

Globe Guide travelled to Ljubljana in partnership with Spirit Slovenia and Hotel Cubo. As always, hosts have no editorial influence on articles. 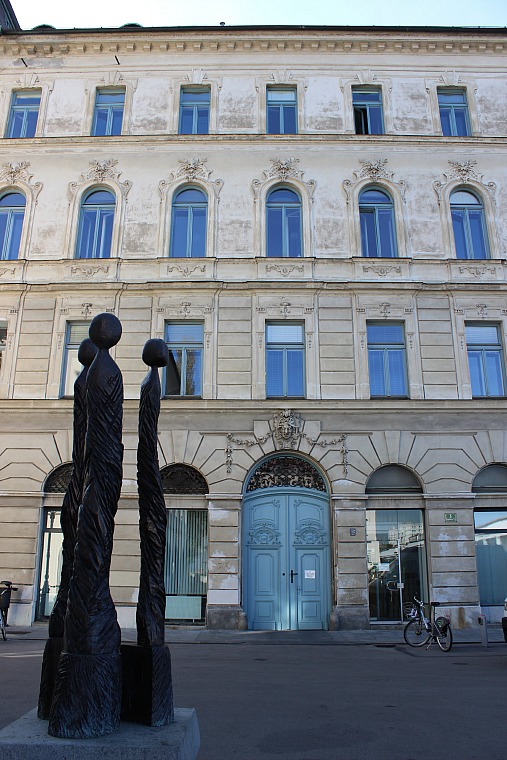