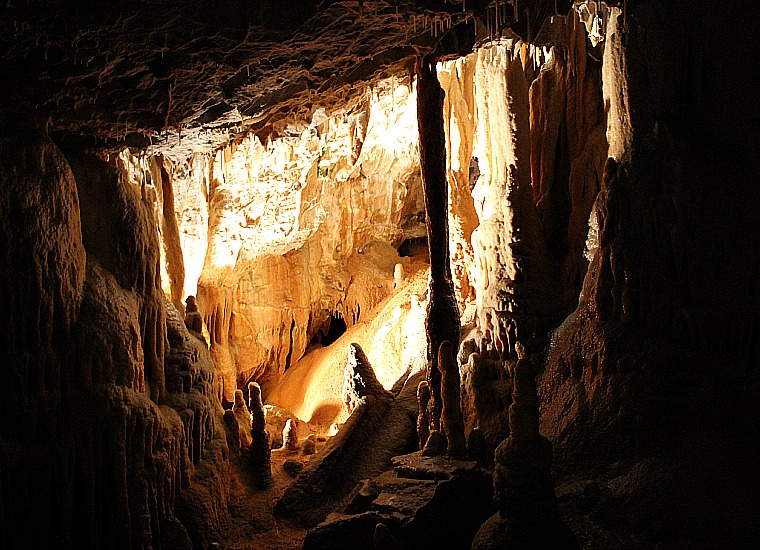 A castle built into a cliff and the ‘Queen of all Caves’ might sound like hype, but as anyone who has visited Slovenia’s Postojna Cave or Predjama Castle can attest to the spectacular sites live up to their reputation. Considered one of the most diverse karst caves in the world, the other-worldly landscape has lured millions of people underground to take in the natural wonder with their own eyes. Combined with a trip to the incomparable Predjama Castle, it’s no surprise the area is Slovenia’s top tourist attraction.

21 kilometres of stalactites and stalagmites (aka rock formations that form in a cave due to ceiling drippings—yay SCIENCE!) make up the Postojna Cave system, including the five kilometre trail visited on a typical tour. 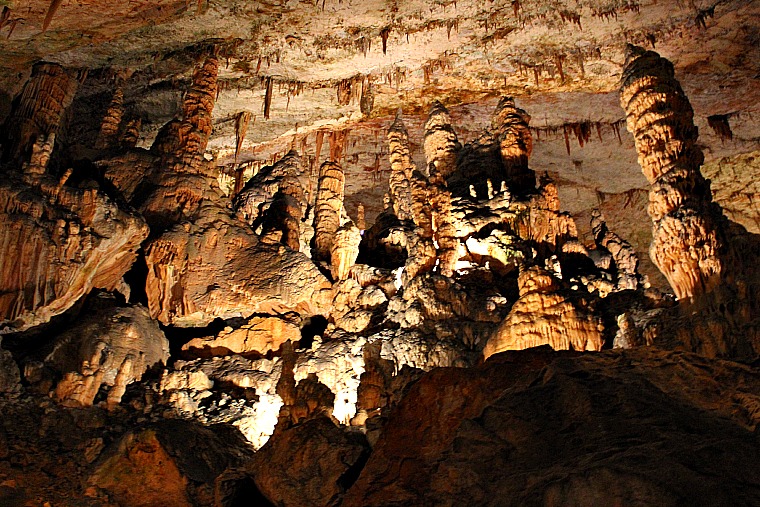 The adventure starts with a ride on an electric train which whisks visitors into the black abyss, with only a few lamps guiding the way. It zips through an expansive, open part of the cave called the Ballroom, which has been outfitted with stunning chandeliers—just incredible! 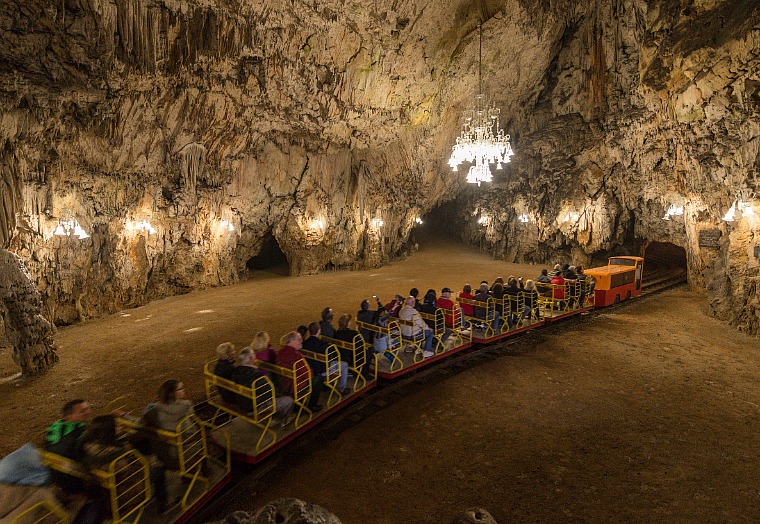 After about five minutes the train comes to a stop, at which point visitors can get off and venture along the dimly-lit pathways, taking in the splendour of the rock formations. Formed over thousands of years, the bizarre shapes look like something that could belong on another planet. 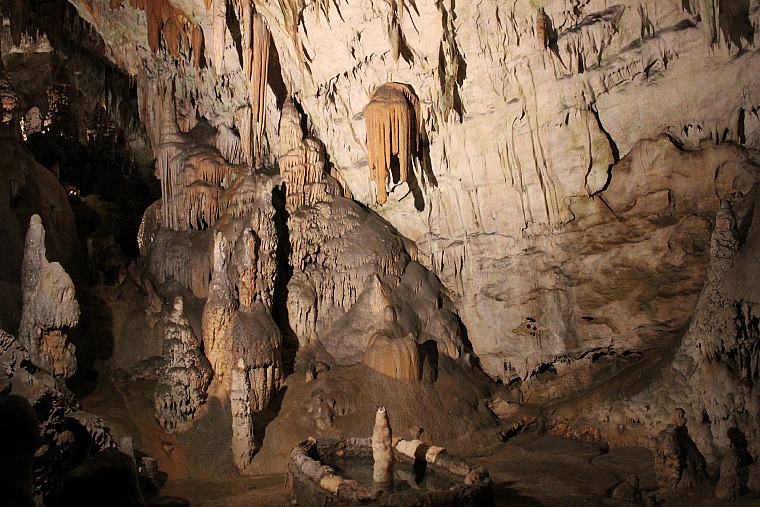 Those who look closely might be able to pick out some of the more famous formations, such as the ‘tulip’, ‘curtains’ and ‘spaghetti’ which actually look similar to their namesakes. There are also some spots where the crystals on the cavern walls shine brilliantly through the darkness, similar to the look of freshly-fallen snowflakes. 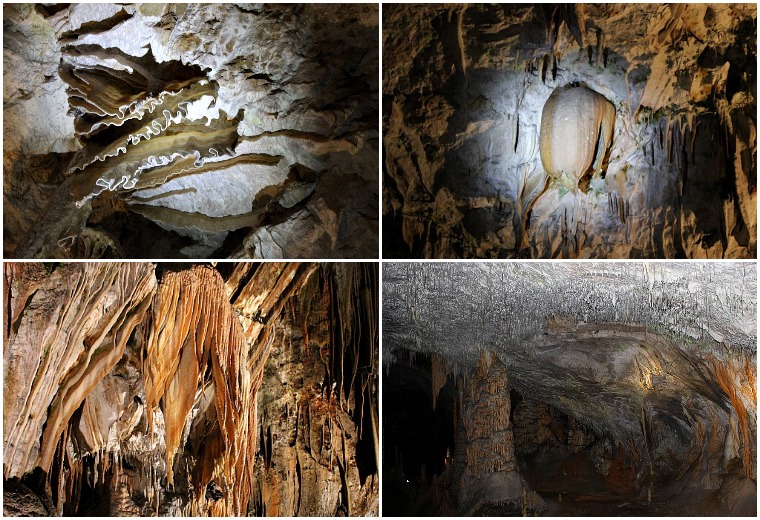 Continuing along the path, visitors eventually arrive at an aquarium which holds a number of proteus, which are also called ‘olm’ or ‘human fish.’ Best described as transparent snakes with legs, the slow-moving creatures are blind and live up to 100 years. 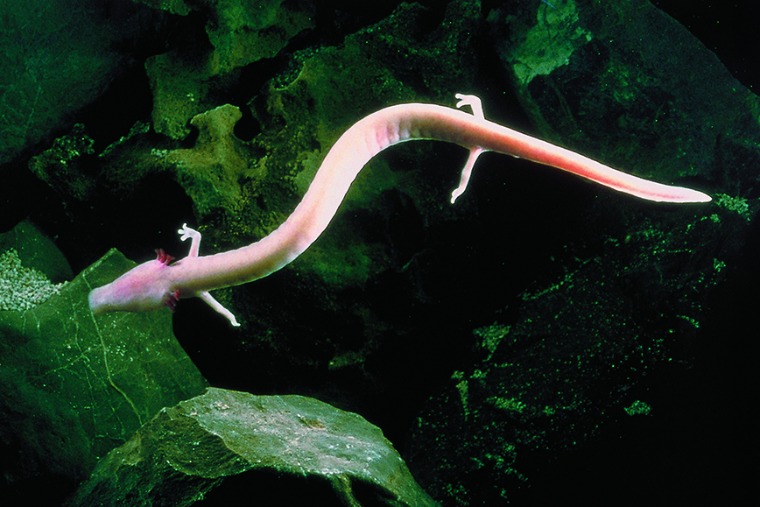 Just as the chill of the cave hits, groups arrive at the most famous landmark of Postojna: the Brilliant. The most famous stalagmite of all, Brilliant is a bright-white, five-metre high limestone formation. Protected by a nearby column and framed by a sinter fountain called ‘the Organ’, it’s one of the most popular spots in the entire cave park. 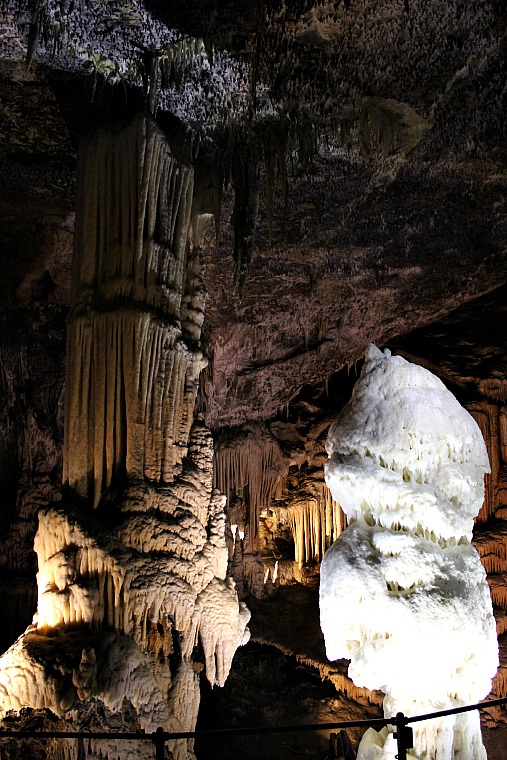 Just outside the entrance to the cave park, there is a ridiculously-windy road that leads to the jaw-dropping Predjama Castle. The nine kilometres of hairpin turns are worth it though: suffice it to say there are few things that compare to the sight of a grand castle jutting out from a sheer rock face. 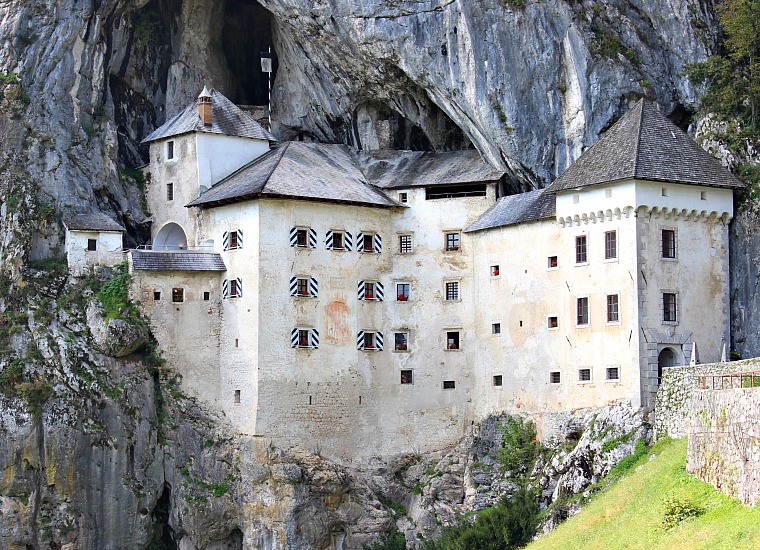 Built halfway up a towering 123 metre cliff, the 800-year-old fortress is tucked right into the cave, which was designed to make it virtually inaccessible for defence purposes. As a result, the 12th century castle has been impenetrable, and save for a few incidents and restoration efforts it has remained untouched.

Visitors are given a pamphlet with information about Predjama Castle before heading in, and can also rent an audio guide for the approximately one hour tour. From there they’re welcome to wander through the castle, which gives a glimpse of what life was like in the Middle Ages. 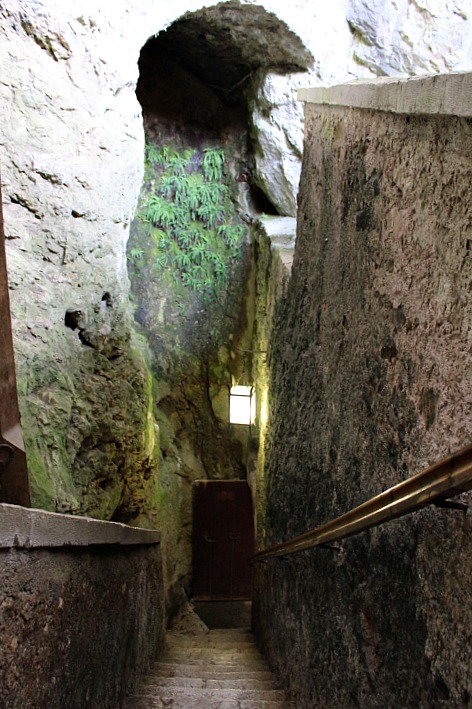 Spots worth nothing are the torture chamber (yes, there was one right inside!), a display featuring authentic furniture along with the coat of arms from families who lived there, and the area which served as a church. Be sure to touch the cold walls throughout, which just so happen to be the inside of a cave! 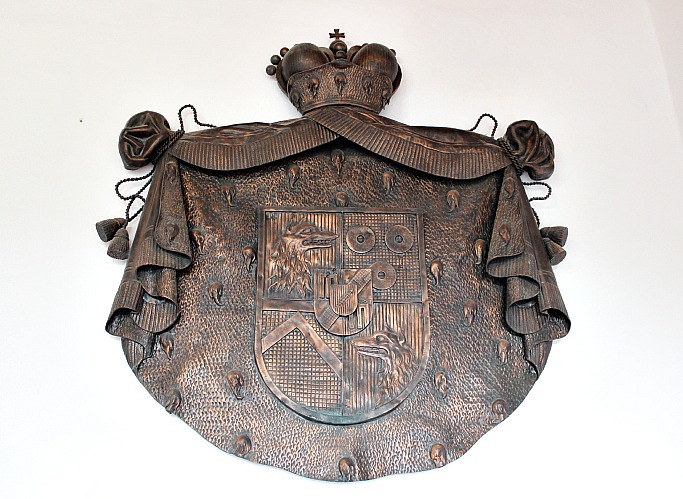 One of the most fascinating parts of the castle is at the very top, where dozens of wooden stairs lead visitors into the depths of the cave. Home to a drinking water source, you can actually see where the water drips down into a pipe, carrying it through the walls and down into the castle’s living area. The crevasses also served as an escape route, so occupants could sneak out while under siege to replenish their food supplies. 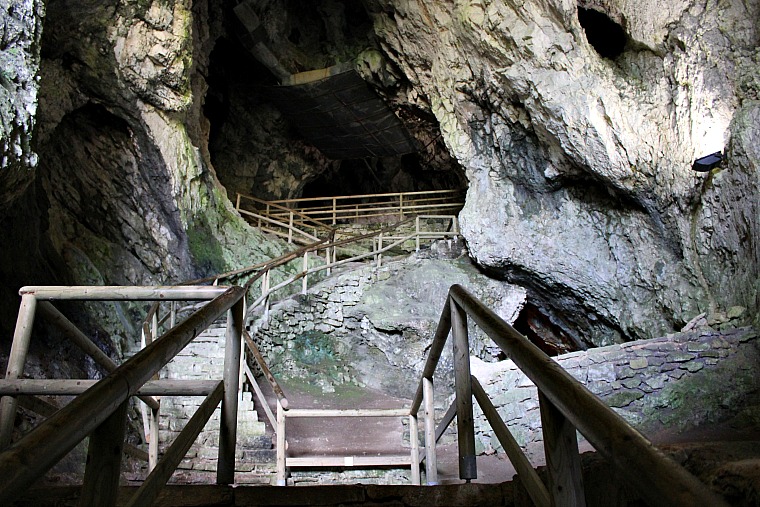 Finally, a balcony off the front of the castle grants a spectacular view of the lush valley below, which includes a church, tiny homes and a restaurant. 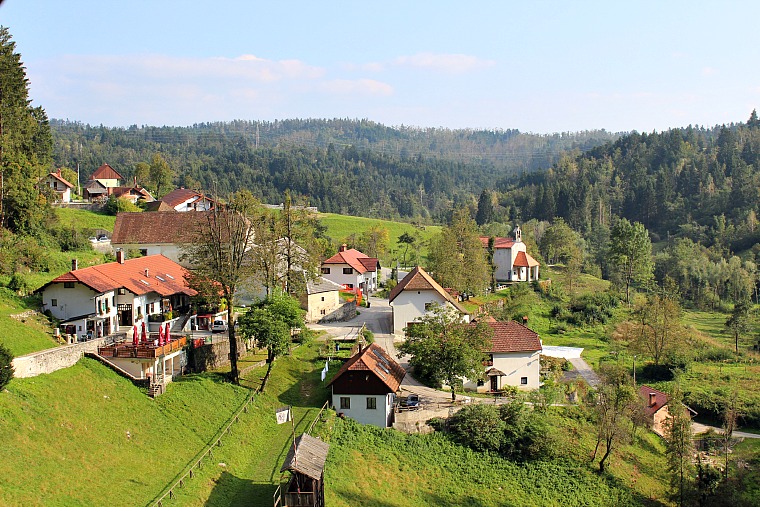 While the castle and cave tour are no doubt the reason everyone ventures to Postojna, there are also lots of other activities within the park. By far the most thrilling is the chance to explore the caves on an adventure tour, where a guide will take visitors through the dark crevasses of the cave system with only a flashlight to light the way. At some points adventure-seekers are harnessed in like mountain climbers, as they traverse over water obstacles keeping an eye out for the bats which call the caves home!

Back above ground, there are also numerous restaurants on site as well as souvenir shops, an exhibition centre and the Proteus Cave Vivarium where visitors can learn more about the ‘human fish.’

How to get there: Postojna is located in the southwest part of Slovenia, about a 45 minute drive from Ljubljana or an hour from Piran. It’s also easily accessed from both Croatia and Italy, which makes it a popular stop for tour groups.

Cost: Entrance to the Postojna Cave is about 23€ for adults, while the castle costs 9€. There are also numerous combo tickets available that can save you money depending on how many sites you see.

Where to stay: There are plans to revamp a former hotel on the site, but until then visitors can stay in the town of Postojna where there is a hotel and a motorhome camp.

Fun fact: The Postojna Cave Park is dog friendly! They have a kennel right on site where visitors can leave their four-legged friends while they explore the caves. 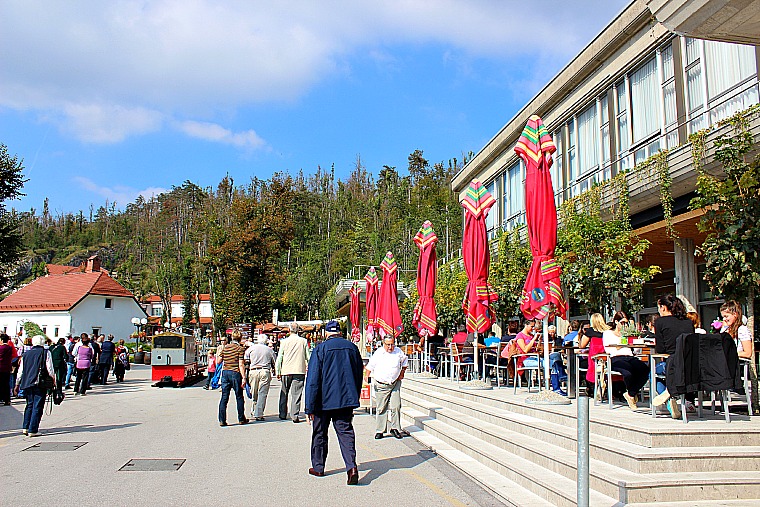 Globe Guide travelled to Postojna Cave and Predjama Castle in partnership with Spirit Slovenia. As always, hosts have no editorial influence over articles.