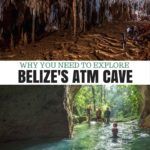 I don’t usually start my day by jumping into a fast-flowing river with all my clothes on, but then again I don’t typically swim through a pitch-black cave to see the skeletal remains of human sacrifices either. 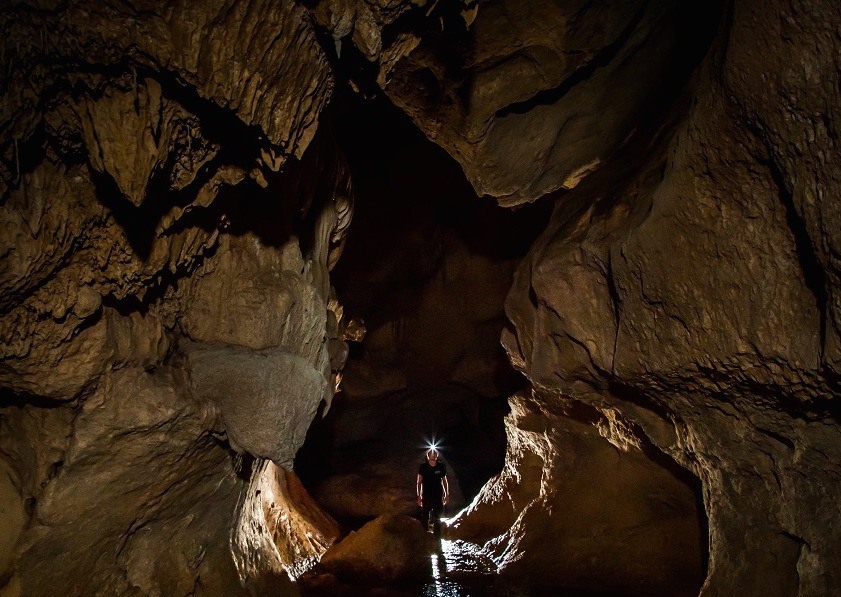 On this rainy December day I found myself in the heart of the jungle in western Belize, an area that was once a stronghold for the Mayan civilization. While most of them left centuries ago after being forced out by things like droughts, plenty of evidence of their way of life remains. And let’s just say it turns out those Mayans weren’t exactly the warm, fuzzy type. But more on that later.

Our group of eight plus our incredibly knowledgeable and friendly guide Hugh from MayaWalk Tours pulled into the Tapir Mountain Nature Reserve, where the entrance to Actun Tunichil Muknal (ATM) is found.

The cave is one of the top Belize adventure tours for good reason: where else can you spend a day walking through the rainforest, swim through streams and an ink-black cave, and come within an arm’s reach of ancient artifacts? This excursion is definitely not for the faint of heart though, as even the most adventurous travellers can find themselves challenged by its physical nature—and don’t even think about attempting it if you’re claustrophobic. 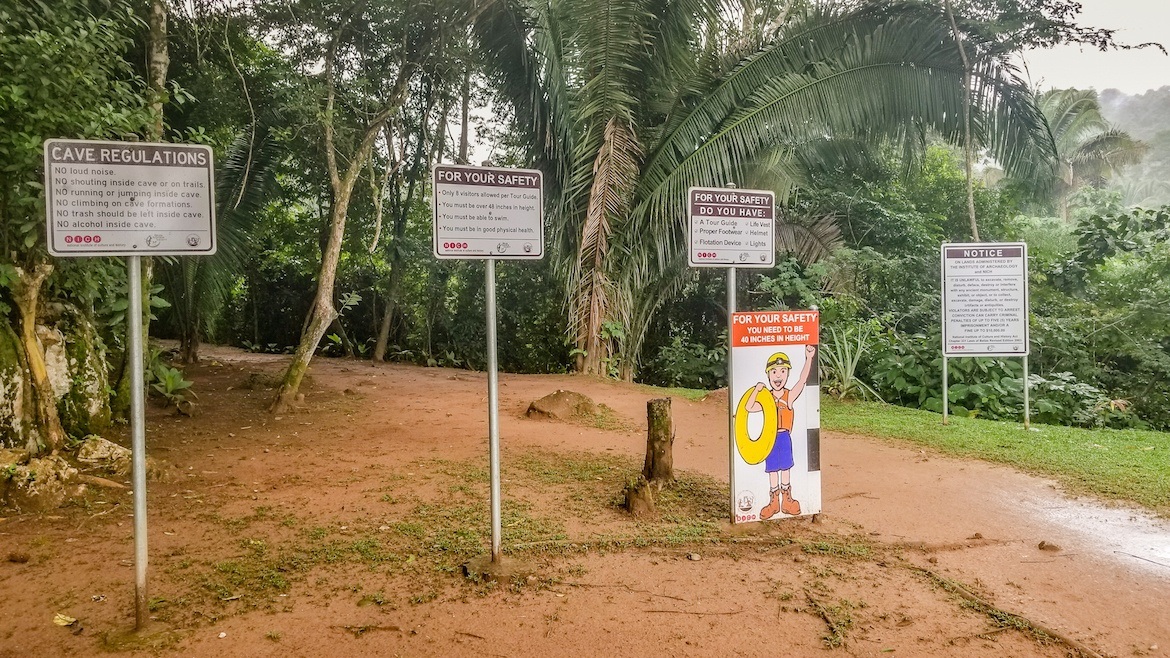 Raindrops drizzled down as we set off along the flat, dirt pathway towards the so-called “Cave of the Stone Sepulchre,” but on this tour the weather was of little concern. That’s because only five minutes into our walk we arrived at the first water crossing, and the only way to get to the other side was to swim. With all of our clothes on.

The stream is typically only waist-height, but being the rainy season the water level had risen. Given my 5-foot-3 frame, I had no choice but to grip the rope connecting the two shorelines and plunge into the cold pool, gasping for air and giggling at the shock of it as I awkwardly swam across. And that, my friends, is when I knew we were in for a wild ride.

There were two more such crossings during our 45-minute walk before we finally made it to Actun Tunichil Muknal, and were rewarded with the sight of a brilliant turquoise pool edged with big boulders and lush greenery beckoning us to its entrance like a secret cove.

As we edged closer to the darkness, Hugh demonstrated how to use the headlamps fastened to our helmets, as they would be our only source of light once we got inside. And it turned out were weren’t even close to being done with the whole swimming situation, since our final destination was 500 metres into the ATM cave which meant navigating waters that were anywhere from as shallow as our ankles to deep over our heads. 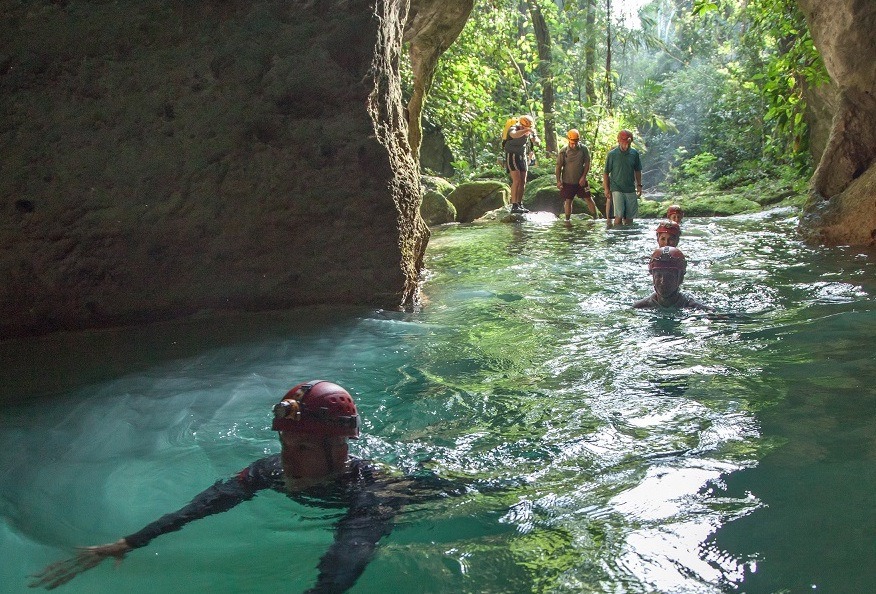 I began to shiver as we made our way inside, the temperature dropping as we lost the sunlight. I may be Canadian and live in a place that regularly dips to -20 celcius, but that doesn’t mean I ever get used to being cold. Noticing my chattering teeth and goosebumps, Hugh laughed and exclaimed, “you could be Belizian!”

We continued making our way through, admiring the crystalline stalactites and stalagmites that jutted out from the cavern walls, dazzling when caught by a beam of thin light from our headlamps. It was incredible to think about how most of the metres-high formations had been around since likely the beginning of time, knowing it takes them a thousand years to grow just 10 centimetres. 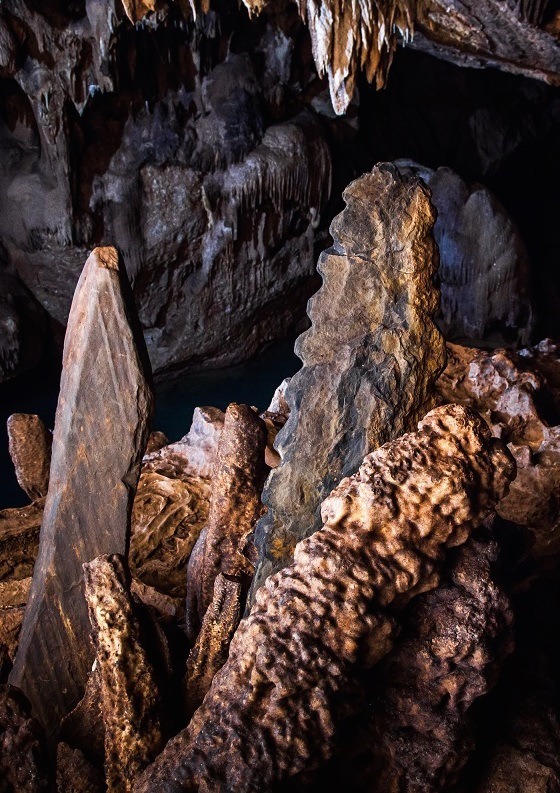 Eventually we found ourselves in an amphitheatre-sized chamber known as “The Cathedral”, a trio of bats welcoming us as they fluttered overhead. Despite the dim surroundings, it was still easy to see the remnants of what the Mayans had left behind in this natural museum: ancient artifacts like urns, ceramics and stoneware, some shattered, others so perfect it looked like they had just been used yesterday.

Hugh explained how they had been used by shamans during ceremonial rituals, prior to the slaughter of their human sacrifices. He also described their killing methods which I won’t share here because eww, but let’s just say those Mayans were creative and brutal. The Criminal Minds writers have nothing on those guys. 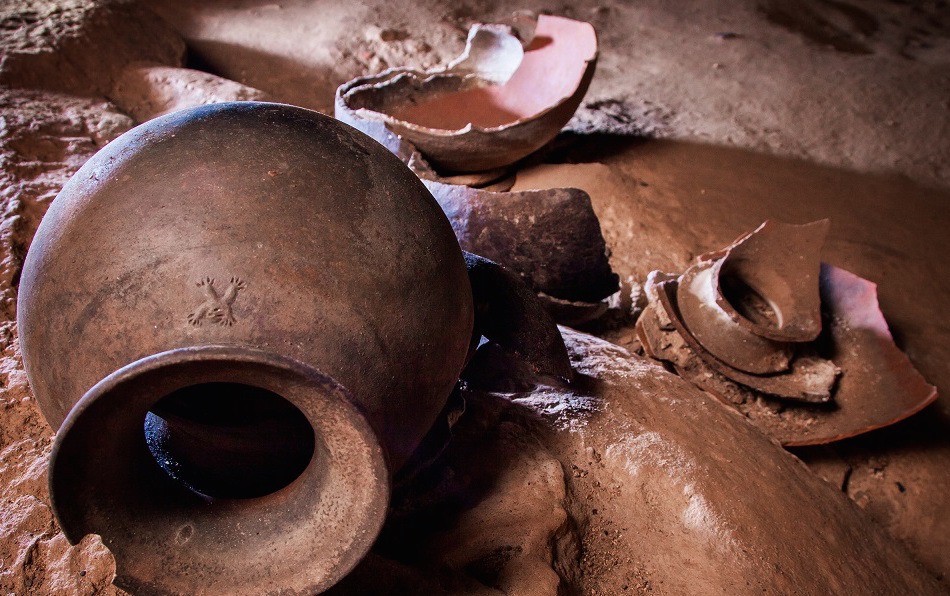 While many of the artifacts have been uncovered thanks to the meticulous work of archaeologists, others surfaced due to natural causes such as major storms, which swept away the top layer of sediment revealing treasures underneath. To date, the bones of over a dozen sacrificed men, women and children have been found, and Hugh said there was no question more were buried below the very surface we stood on.

“It’s not a matter of are they there, but how many there are.”

Over the next three hours we continued to wind through the maze of tunnels and dry chambers, sometimes swimming, other times scampering up seven-foot-high boulders like rock climbers or squeezing through a tight space between cave walls. Hugh kept a watchful eye on us the whole time, warning us not to get too confident in the cave.

“People who are afraid are the ones who are safe,” he said, words that I kept in the back of my mind as I methodically made my way up a 14-foot-high ladder miraculously affixed to the uneven cavern wall. Reaching the top, I found myself in Actun Tunichil Muknal’s most famous spot: a ceremonial chamber, which is the resting place of the so-called Crystal Maiden.

Despite its moniker, the original gender and age of the skeleton is still up for debate though it’s commonly thought to be an 18-year-old woman. Regardless, the bones are incredibly well-preserved and have calcified, resulting in the sparkling appearance that earned it its nickname. 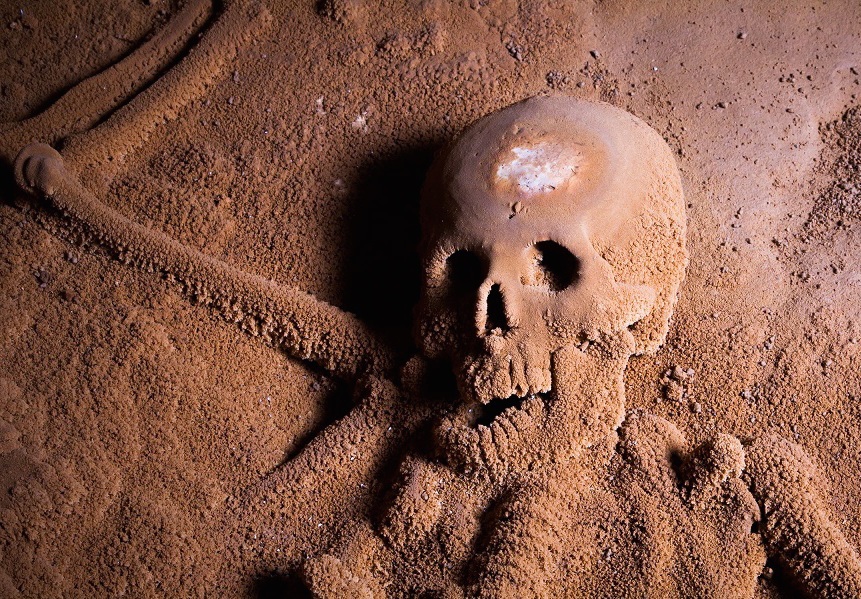 Like all of the other artifacts in the cave, we were able to get within an arm’s reach of the Crystal Maiden which made me feel Indiana Jones in Raiders of the Lost Ark. I mean, how many people get to come that close to priceless relics without a single barricade or security guard in the way? Admiring her was the perfect way to cap off our visit to the ATM cave, before heading back down the skinny ladder to end our journey the way it began: scampering over boulders, swimming through a maze of dark passageways, and a jungle walk.

When our sopping-wet selves finally made it back to the base, we arrived to find lunch spread out before us, complete with rum punch. Raising our glasses in the air, we toasted to our epic day exploring Belize’s Actun Tunichil Muknal cave, one of the only places in the world where adventure meets Mayan sacrifices. 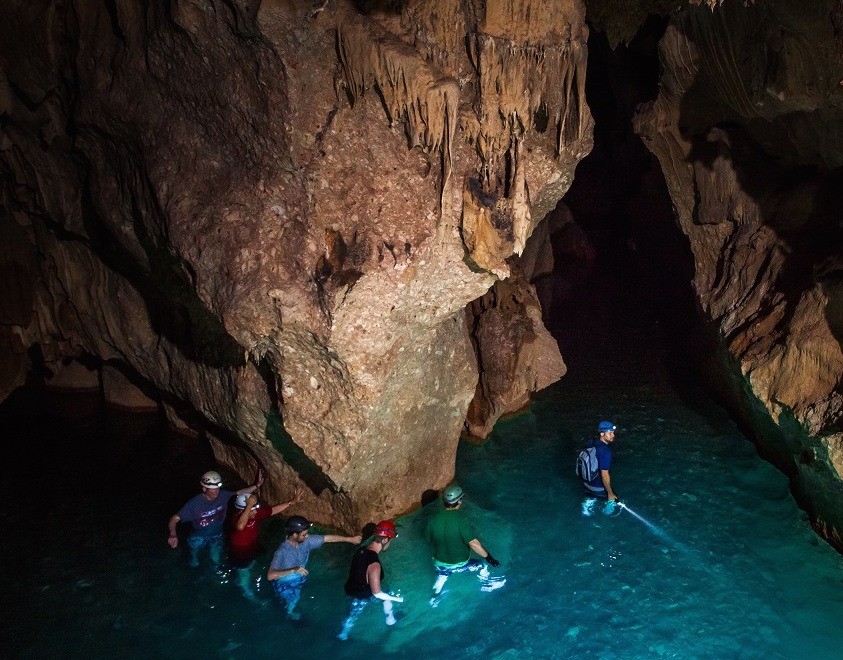 How to get there and ATM cave tour cost: ATM is a one hour drive from San Ignacio, and there are a handful of tour companies in town offering the excursion for about $100 USD per person including the fabulous MayaWalk Tours. People staying as far away as spots like San Pedro can still book a tour, since some operators coordinate flights that will get you all the way there and back within a day. Click here to book

What to wear: You are going to get absolutely soaked, no way around it, so don’t bother wearing anything fancy. Men should wear swim trunks and a shirt, while women will want to wear a swimsuit under capri leggings or shorts, and a top. Bring a thick pair of black socks, as there is one section of the cave where visitors aren’t allowed to wear shoes. For footwear, a pair of sporty sandals like KEENs

What to bring: Sunscreen, bug repellent and a water bottle are key for the walk through the jungle, and guests will want to bring a towel and change of clothes.

Need to know: If “photos or it didn’t happen” is your motto then you won’t like this tour. Absolutely no cameras are allowed in the cave, after some special snowflake of a tourist dropped his camera right on a skeleton and damaged it.

Globe Guide explored Actun Tunichil Muknal as a guest of MayaWalk Tours. As always, hosts have no editorial influence on articles. 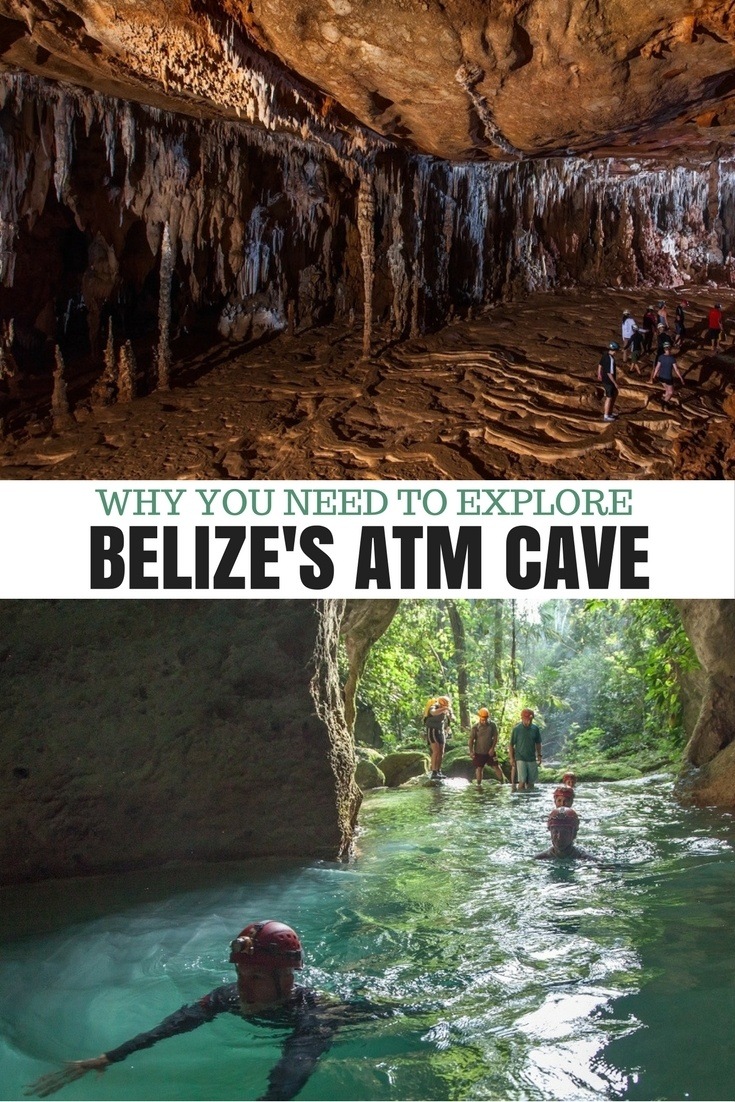