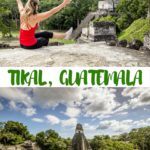 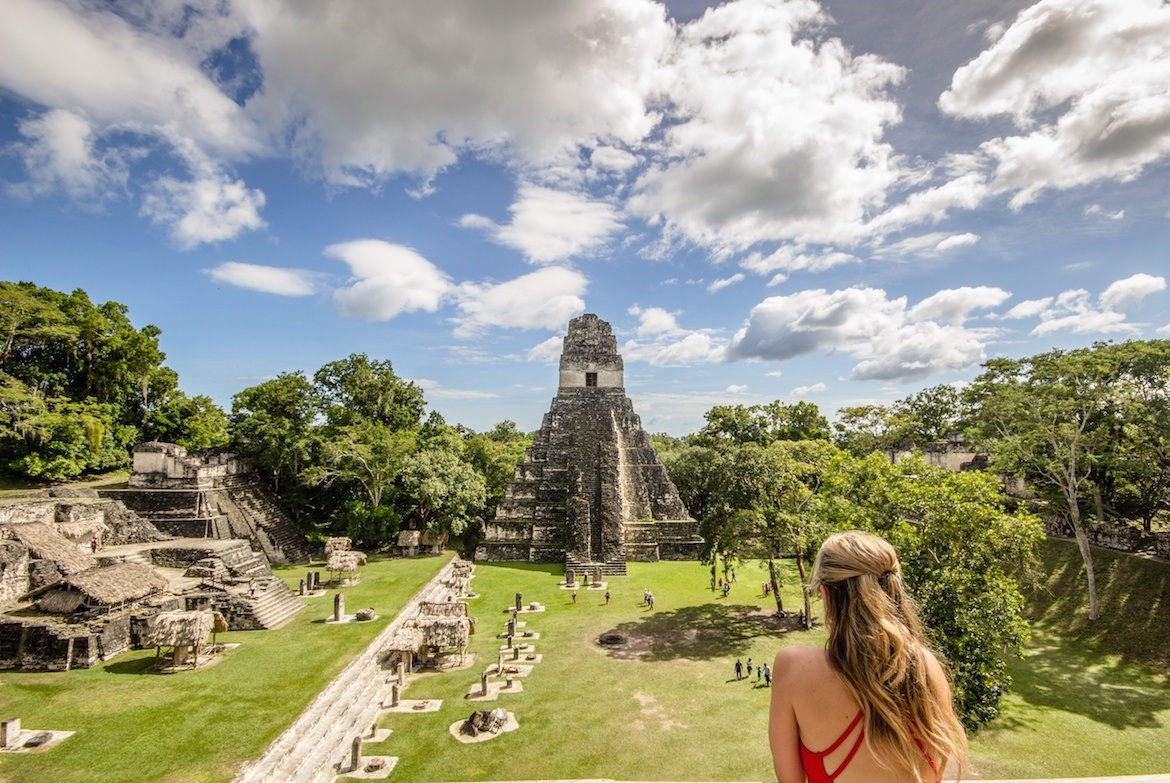 Looking out at the Great Plaza

It was easy to see how the ancient Mayan site of Tikal, Guatemala earned the nickname ‘Jurassic Park.’ From the lush jungle surroundings to the screams of howler monkeys in the distance that sounded more like dinosaur roars, it felt like a raptor could pop out of the dense vegetation surrounding us at any moment. Twigs snapped underfoot as we made our way along the dusty trail, as exotic creatures like Yucatan spider monkeys, oscillated turkeys and bright-billed toucans rustled around in the leafy tree branches high above our heads.

Rounding a bend, the sight we’d come all this way for suddenly appeared before us: our first glimpse of Temple I, the so-called Temple of the Great Jaguar, rising nearly 50 metres toward the bright blue sky. Dramatically jutting out of the tree line, it felt like we’d stumbled upon a lost pyramid, a relic from centuries past. And as it turns out, that’s exactly what it was. 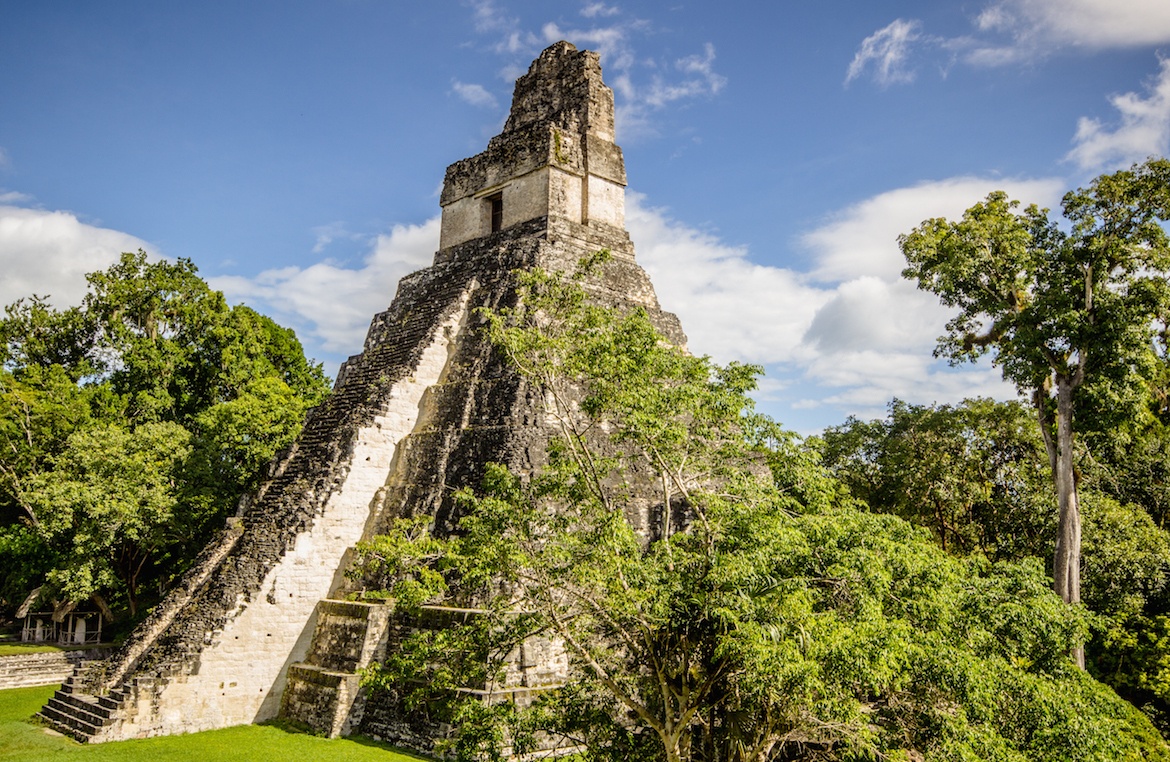 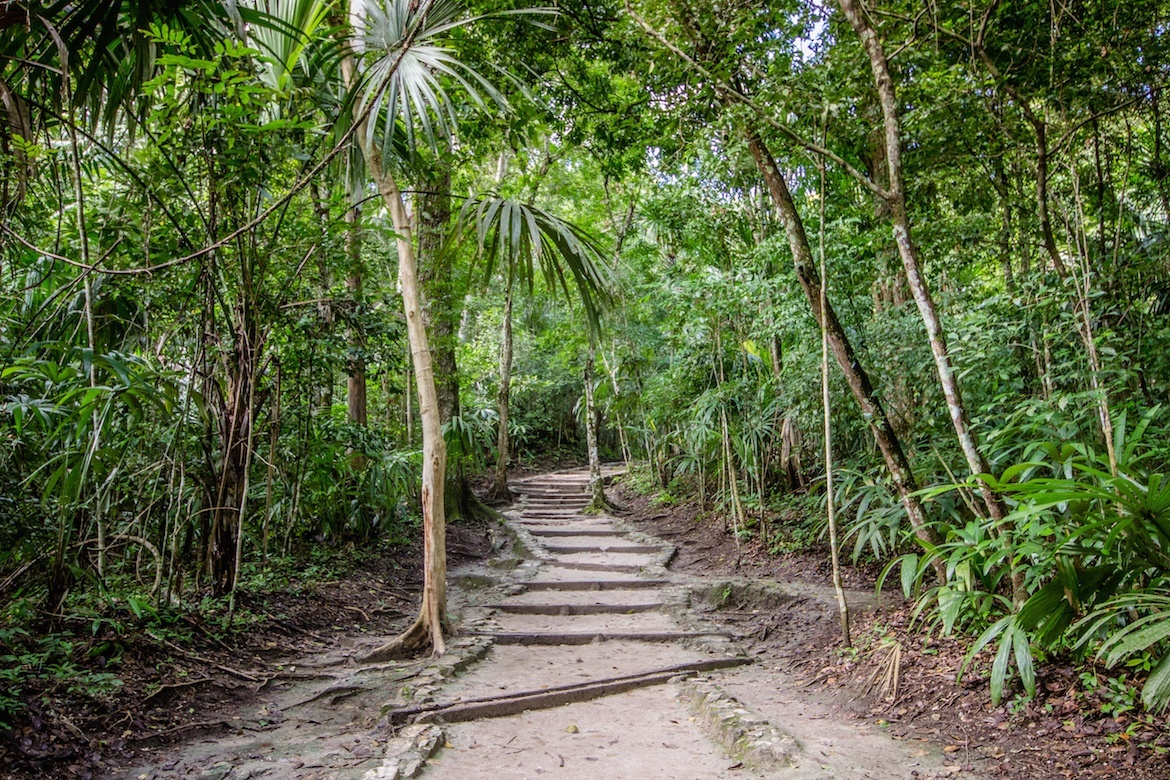 A pathway leading to the ruins in Tikal

Nestled in the Petén province in northeastern Guatemala, Tikal National Park has been designated as a UNESCO World Heritage Site for good reason. Considered one of the major sites of the Mayan civilization, it was a stronghold from the 6th century B.C. until the inhabitants eventually migrated away in 10th century A.D. While the entire park in the Maya Biosphere Reserve is made up of nearly 60-thousand hectares of palm forests, savannah and wetlands, most of the important Tikal mayan ruins that still stand today are centred in about 400 hectares of it.

Being just a short drive from the border that Guatemala shares with Belize, the site is commonly visited as a day trip from San Ignacio to Tikal, which is how we found ourselves wandering around the complex with our jovial, well-spoken guide Regge from MayaWalk Tours. It had only taken about two hours of driving to get from our hotel in Belize to where we stood now, including scenic stops in the countryside to sip Guatemalan coffee, sample chicle which is what makes chewing gum, and watch a group of chatty women do the village’s laundry in glistening Lake Macanche. 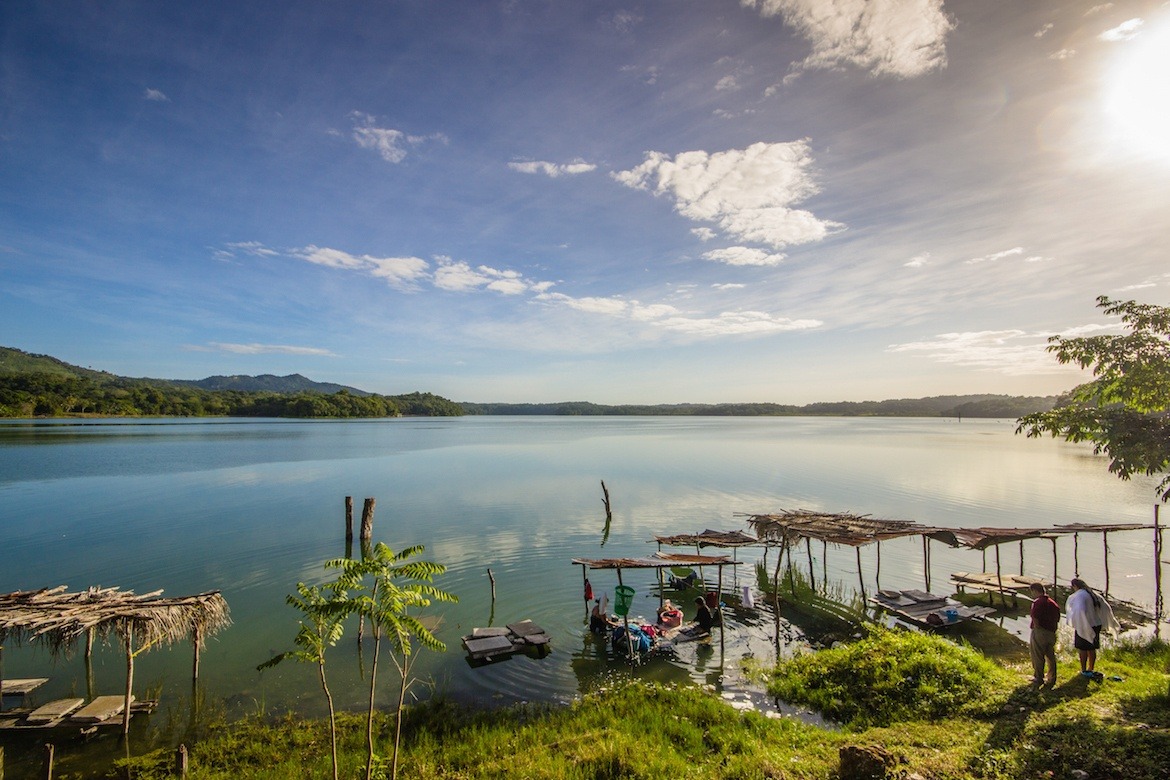 Once we’d arrived at Tikal, navigating the pathway toward the main complex was an adventure in itself, as it had recently rained which meant vaulting over muddy pits along the way (travel tip: don’t wear white shoes to Tikal like yours-truly). En route, Regge pointed out the impressive diversity of the flora and fauna that surrounded us, such as palms, orchids and the ceiba tree which is considered a national symbol of Guatemala. Tikal is also a paradise for birders and wildlife lovers, as the reserve is home to the likes of more than 300 species of birds, plus jaguars, pumas, snakes, bats, anteaters, monkeys and troops of fearless coati (also known as Coati-Mundi or Quatimundi) which look like a house cat mixed with a raccoon. 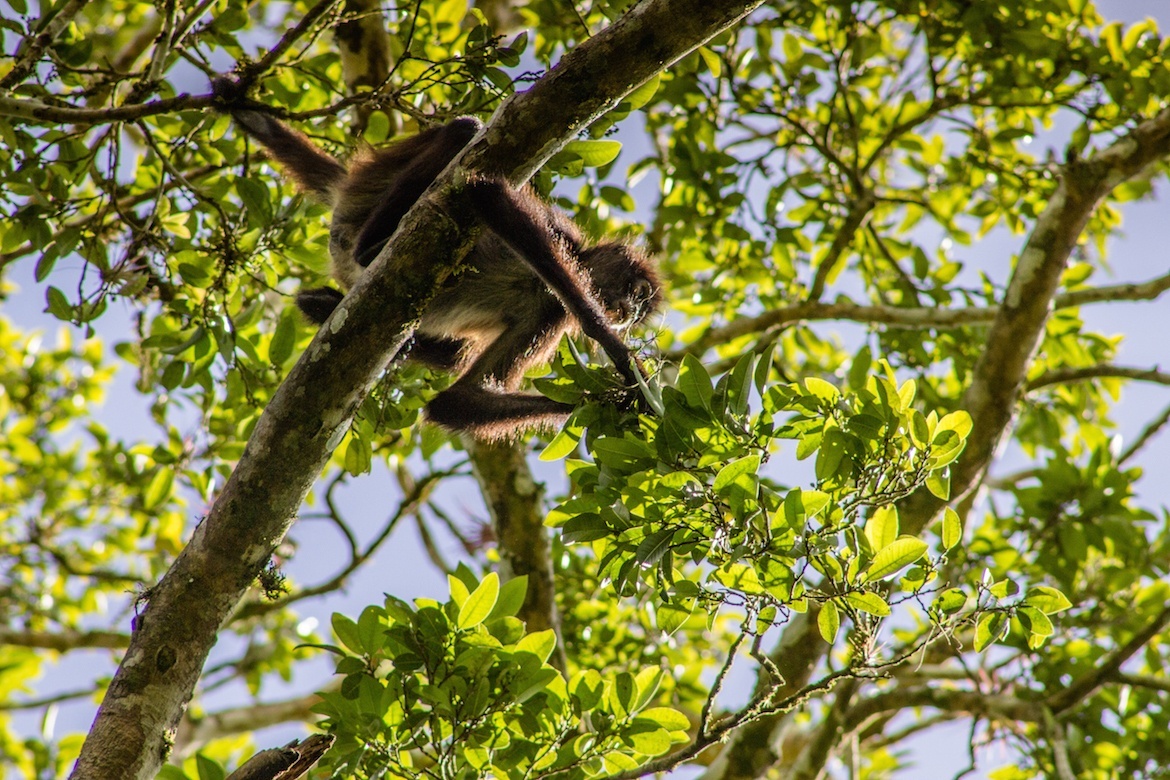 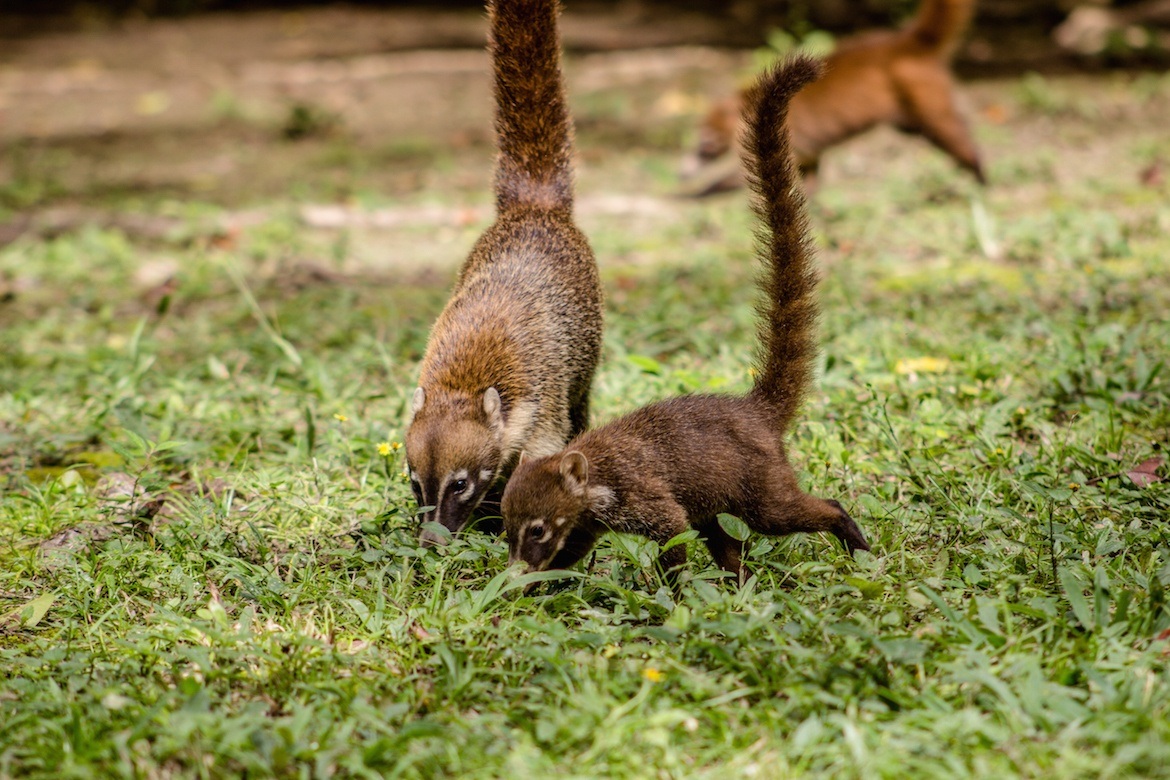 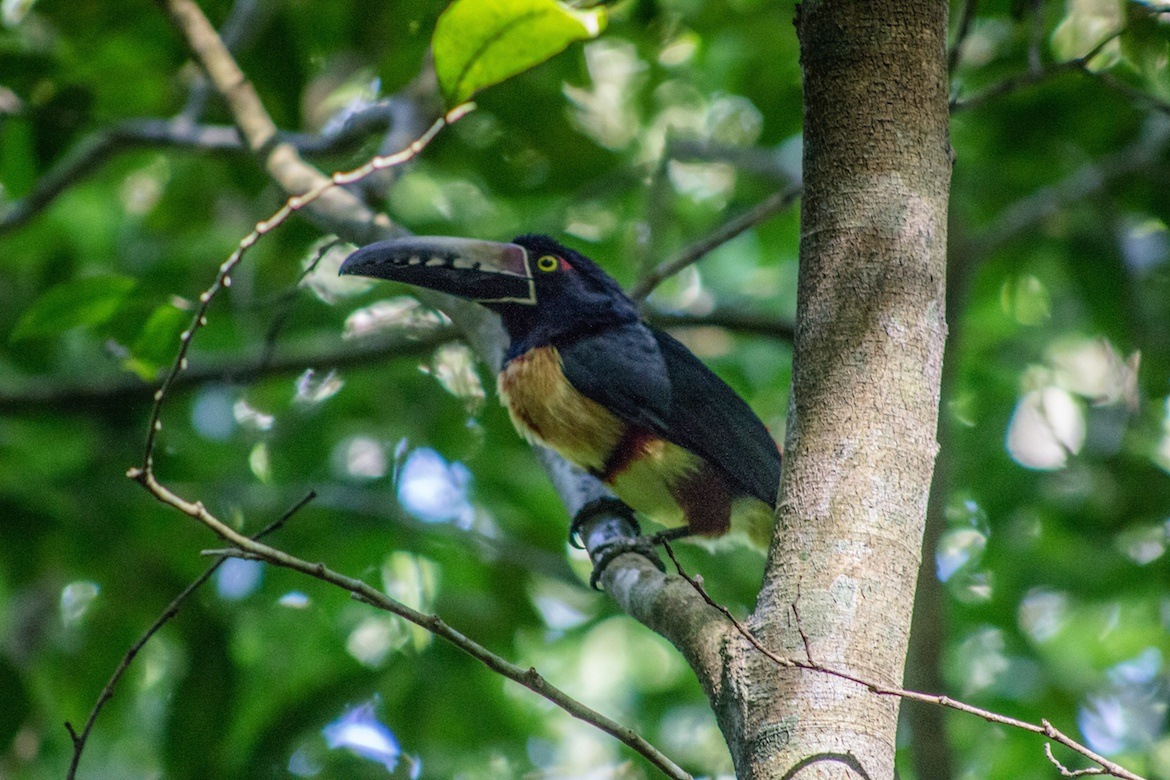 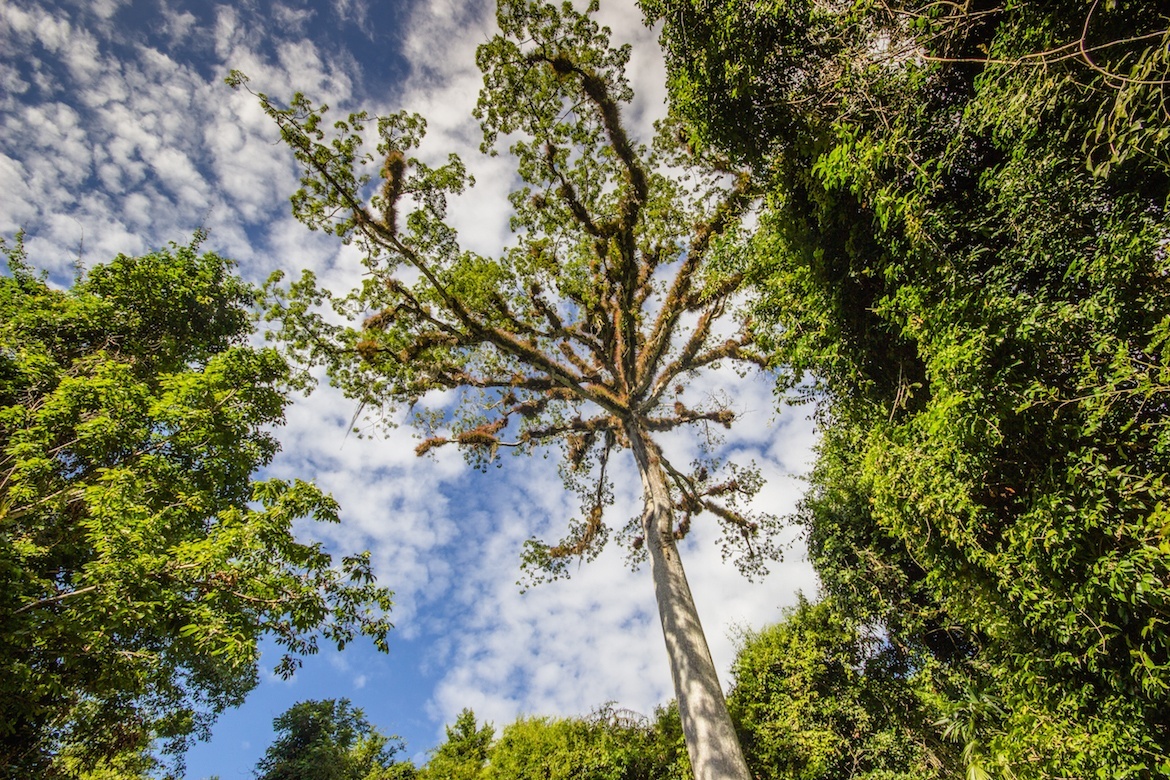 While the nature spotting was a fun perk, visiting Tikal is really about the ruins—and there is no shortage of them. With more than 10-thousand structures throughout the complex including countryside dwellings, terraces, palaces and temples, today we were focusing on the most impressive ones found spots like the Lost World Complex, and the Great Plaza which is considered to be the crown jewel of Tikal.

Anchored by Temple I and Temple II, there are plenty of structures to explore and climb up for a birds-eye view, with very few spots off-limits to visitors. With that in mind, Regge gave us a quick overview about the history of the area including a lesson about the Mayan ball game Pok-A-Tok where the winner ended up being a human sacrifice (say what?!), then gave us an hour to explore on our own—AKA take selfies. 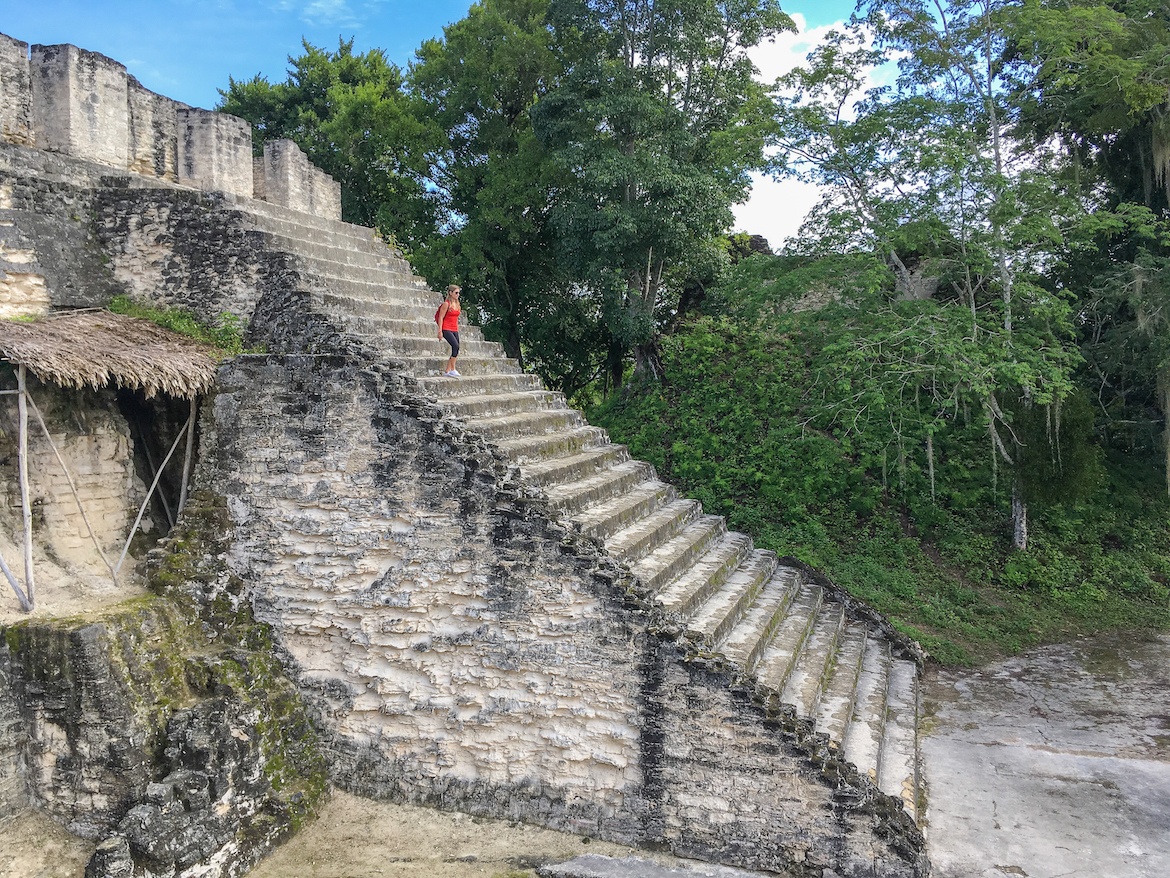 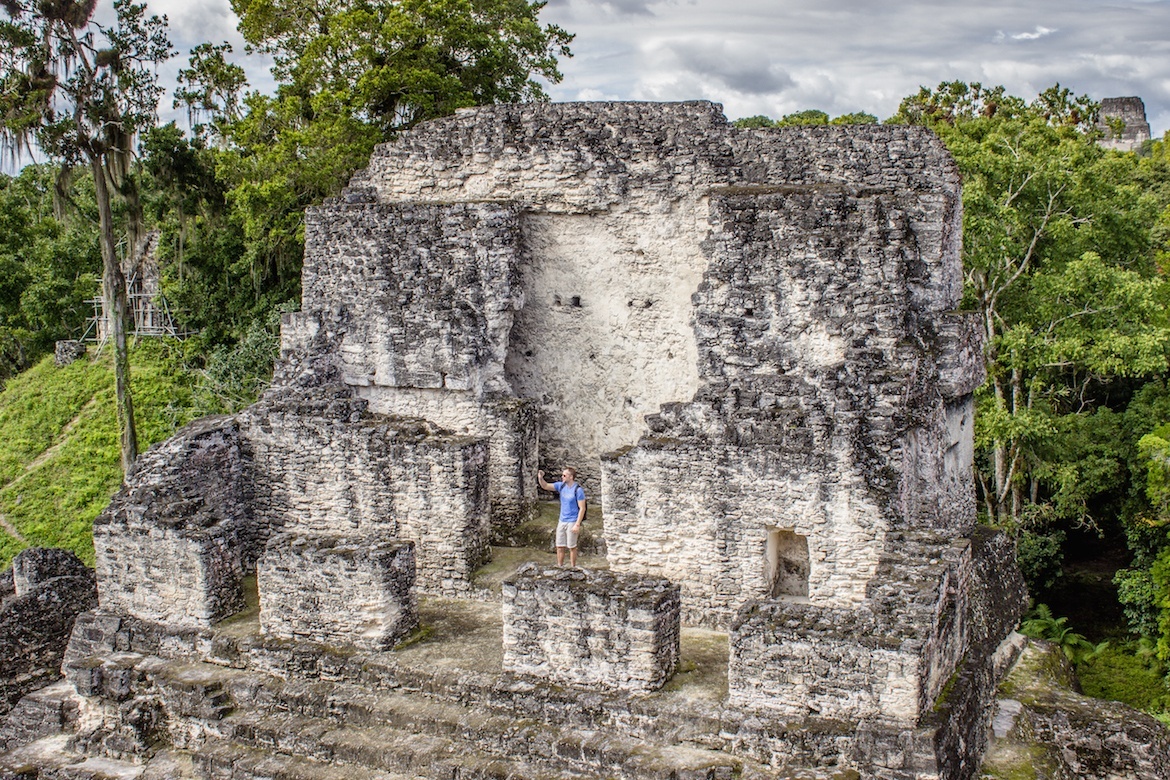 The perfect spot for selfies! 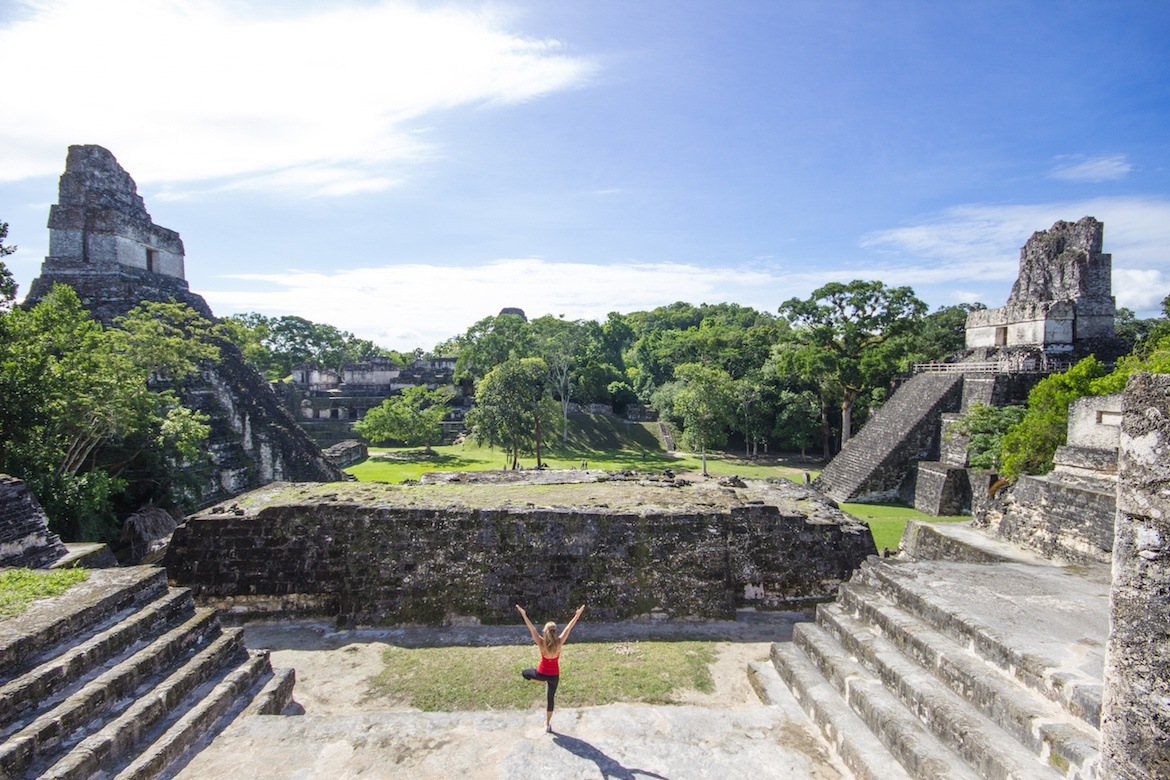 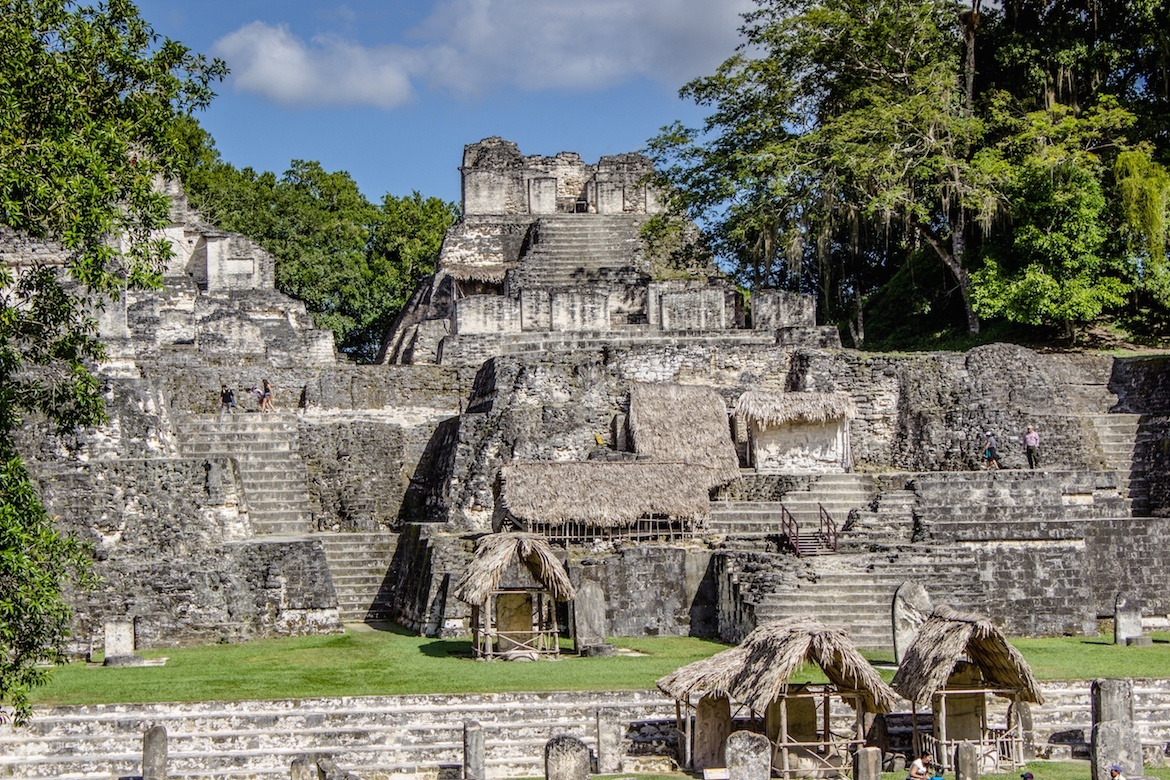 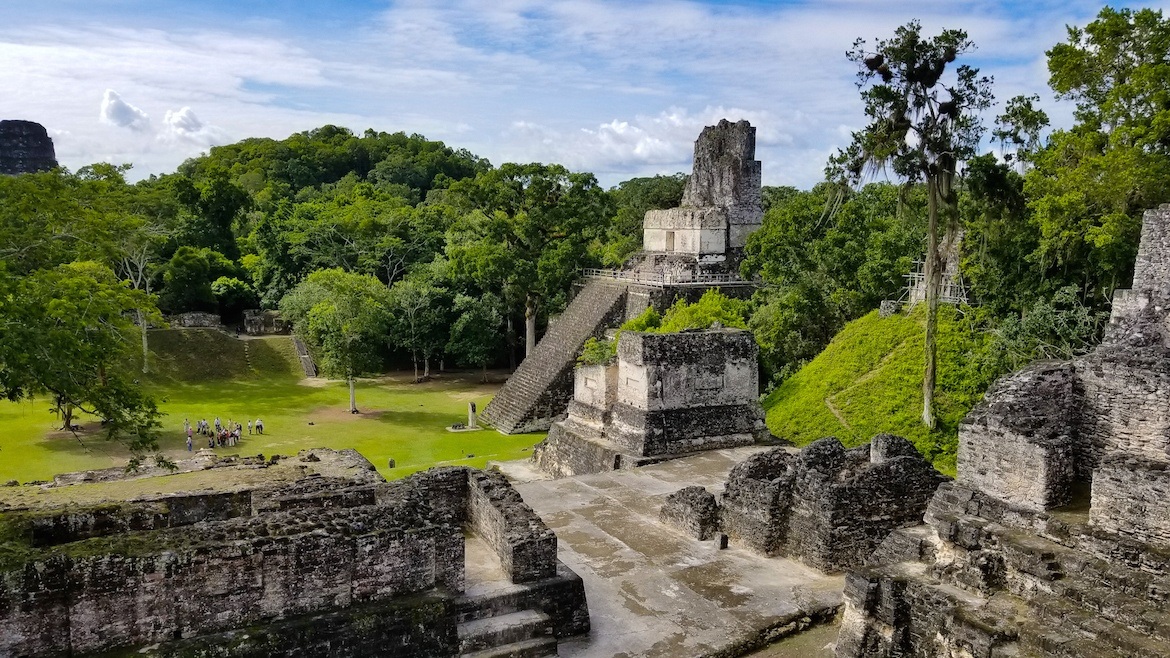 Once my Instagram dreams were achieved, we met back up with Regge who’d sought shelter from the blazing Guatemalan sun under a canopy of leafy trees, then continued toward the remaining archeological sites. At Temple V we shouted and clapped our hands to hear echoes vibrate off the porous limestone rock which was used to build it, hence Tikal’s name which means “City of the Voices.” The next pyramid meant getting a serious leg workout, as we climbed up to a viewing platform for an unforgettable panoramic view of the surrounding jungle—also a prime spot for early-risers to watch the sunrise. 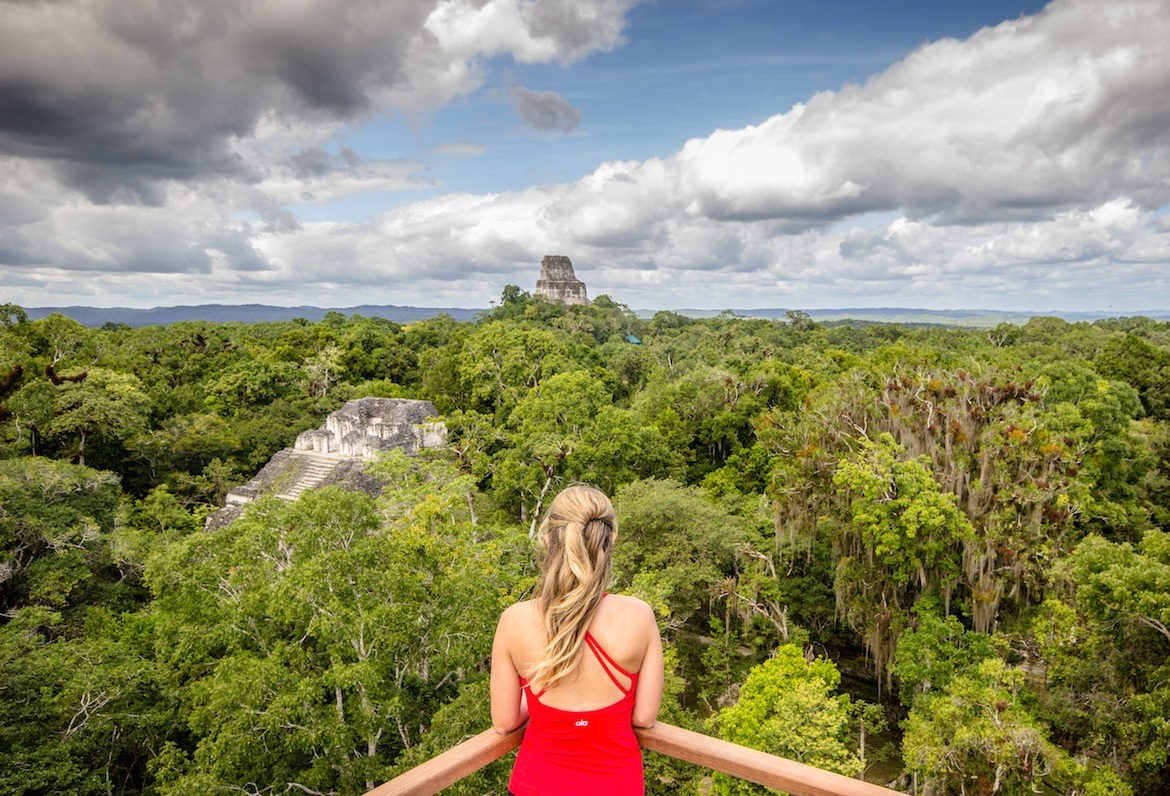 The last stop on our Tikal tour was Temple IV, where we navigated a seemingly never-ending series of wooden and stone steps to get to the top of the 70-metre high pyramid which is known as the Two-Headed Serpent Temple. On the way up we passed a number of Guatemalan soldiers, who take advantage of its envious perch to keep a watchful eye on the surrounding rainforest to ensure that the only monkey business happening is…well, whatever business actual monkeys get up to. 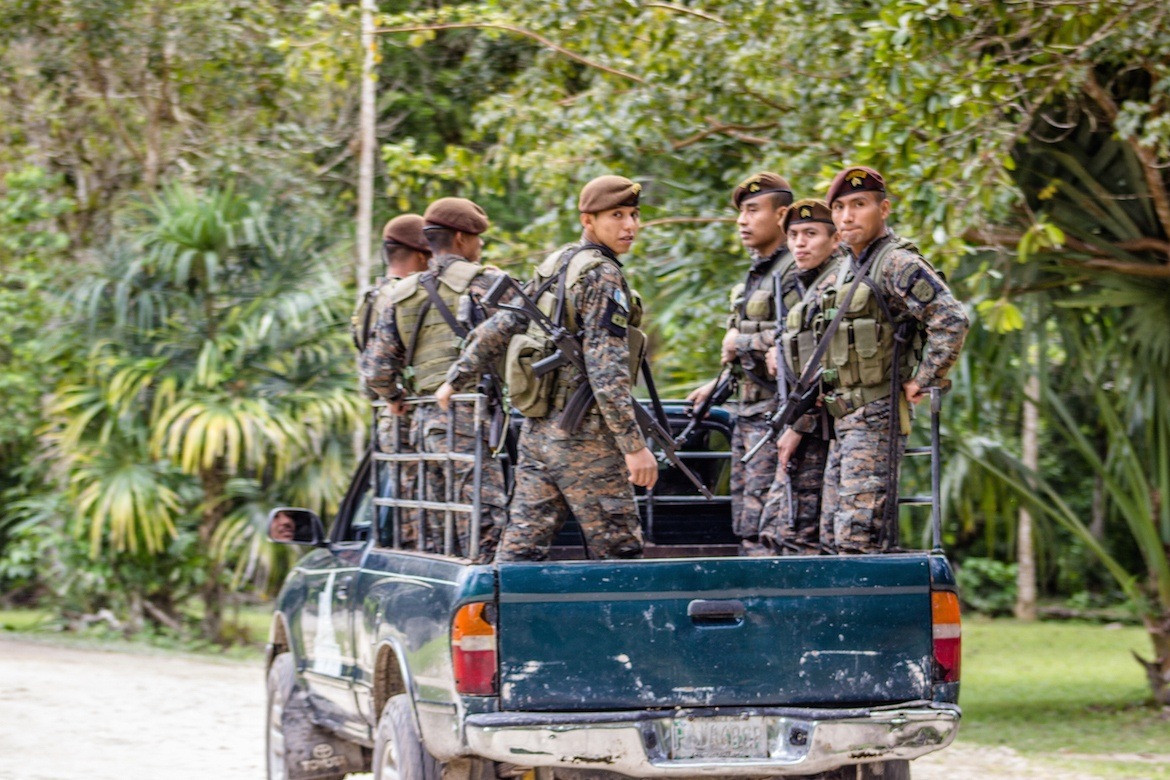 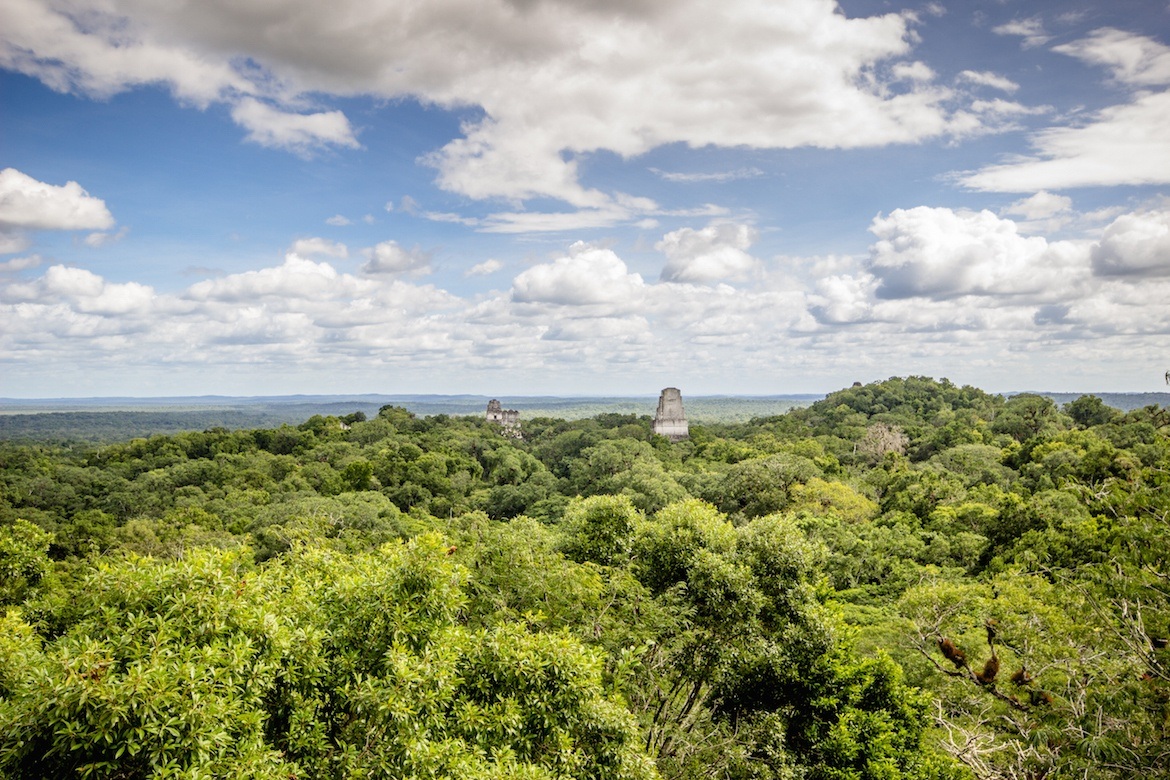 When we finally made it to the top, we sat down on a steep stone platform jutting out of the side of the pyramid and settled back to catch our breath. The view was mesmerizing as we gazed out at the lush rainforest which stretched as far as the eye could see, the skyline marked by temples soaring out of the trees against a blue-bird sky painted with puffy white clouds. There was no question it was the perfect place to finish our epic Tikal day trip—and best of all, we didn’t have to take on a single dinosaur in this so-called Jurassic Park. 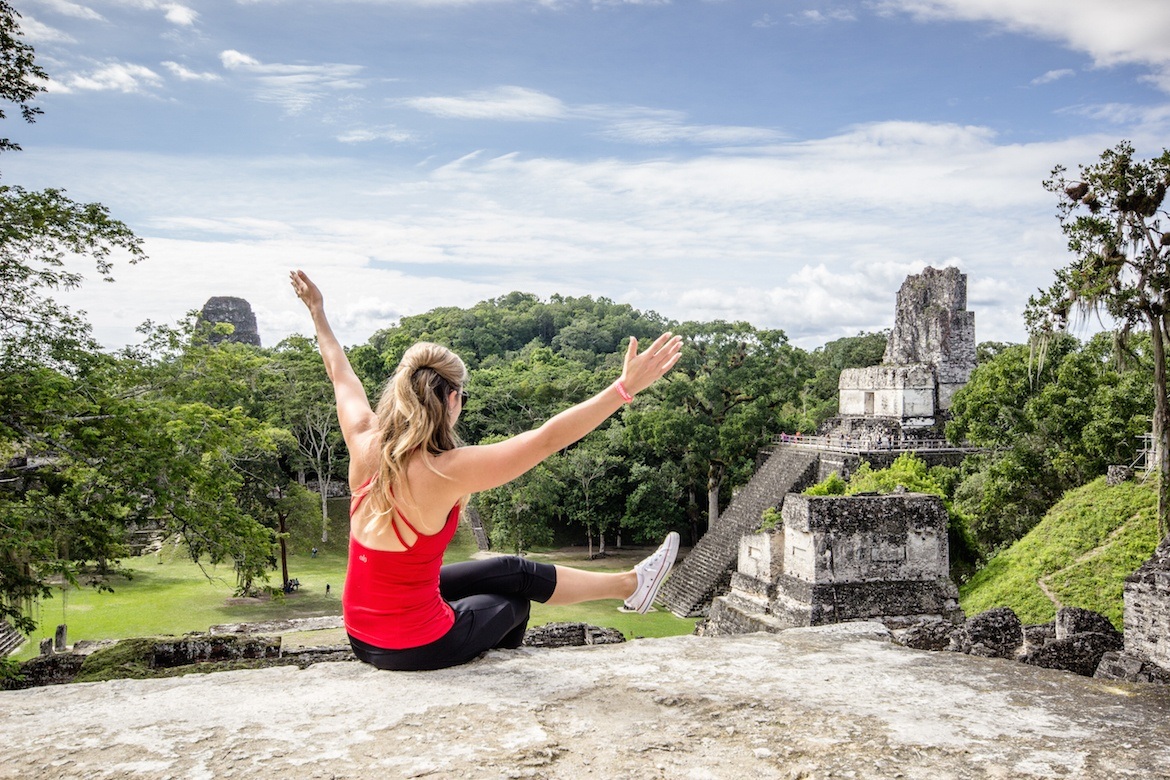 Practicalities for a Belize to Tikal tour:

How to get to Tikal, Guatemala: Those already in Guatemala typically book a Flores to Tikal tour. Tikal tours from San Ignacio in Belize’s Cayo district are also an easy day trip, since the Guatemalan border is just a 15 minute drive away. Once you make it across the border (don’t forget your passport!) it’s a two-hour drive to Tikal. There are many tour operators in Belize who can organize the trip, including MayaWalk Tours which handles all of the logistics including border crossings and payments, transfers, lunch and a dedicated guide. Those with mobility issues can also arrange to be shuttled through the park in an open-air truck.

Cost: Admission is 180 Guatemalan quetzal, which is about $22 USD.

Best time to visit Tikal: The park is open year-round, with high-season being mid-December through April. Birders will want to visit between November and April, and it’s possible to see jaguars in April and May. The border crossing between Guatemala and Belize is quietest on Sundays, and visitors should try and get to Tikal before noon to beat the crowds. Those with the luxury of time should book a two-day trip, to explore Tikal during the magical sunrise and sunset hours. Before you go, read some interesting facts about Guatemala here.

Where to stay: If time permits, try to book an overnight stay at one of the three on-site hotels. That way, you can head to the ruins at dawn for the spectacular Tikal sunrise tour and hear the rainforest waking up.

Globe Guide explored Tikal as a guest of MayaWalk Tours. As always, hosts have no editorial influence on articles.

One week in Belize: The best itinerary for adventure and relaxation 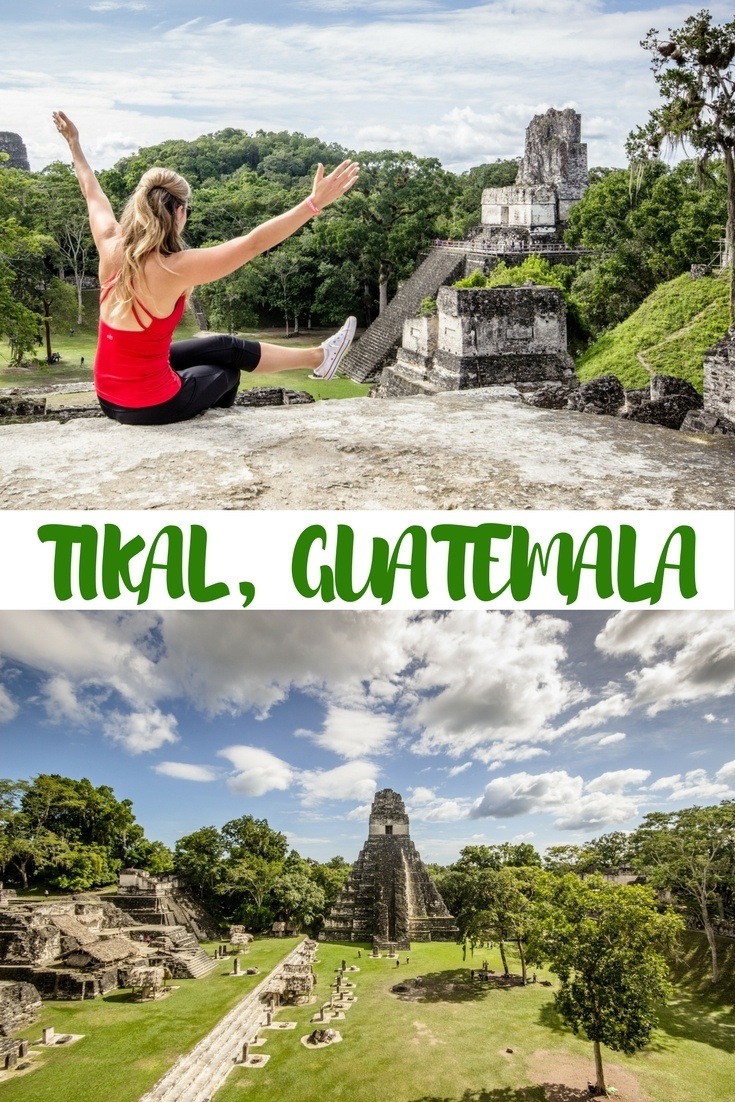