5 things you need to know about driving in Bosnia 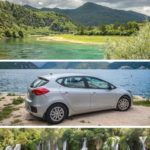 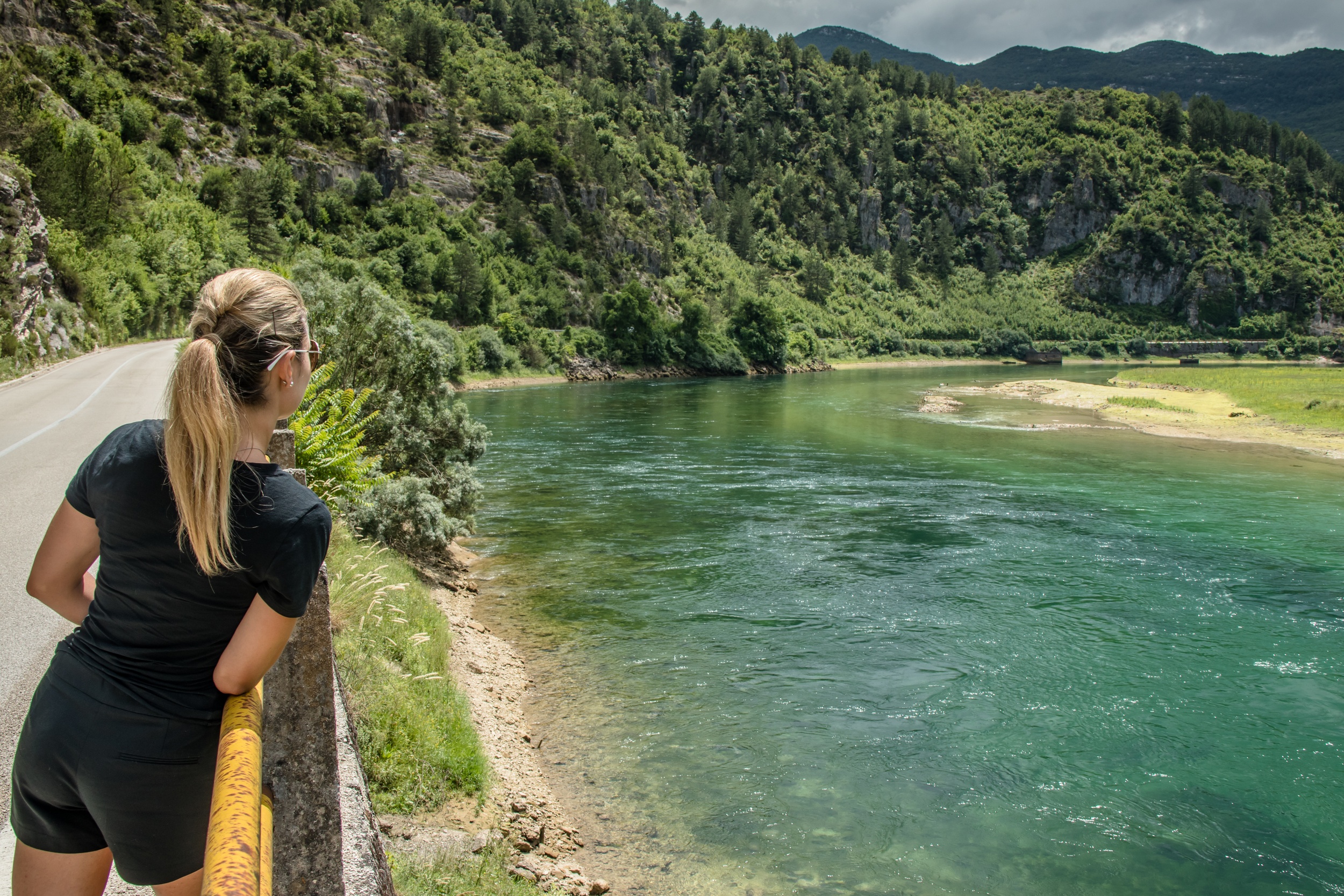 So I mayyyy have had to pay off a couple of Bosnian police officers.

To be honest, I wasn’t even surprised when it finally happened. And, spoiler alert: I totally wear it as a badge of honour now. Welcome to driving in Bosnia, people.

I’ll get to all my tips for driving through Bosnia in a hot minute, but first I think you’re probably wondering how this little blonde Canadian found herself bribing police in the Balkans. So here’s the deal…

I was driving a rental car near Mostar (with Croatian plates–not sure if that played a factor) and stopped at a stop sign before making a right-hand turn onto the highway. Here in North America that’s totally a thing, but about 10 seconds after I did that I glanced up and saw lights flashing in my rearview mirror. Son of a B. So I pulled over, and one of the policemen got out of the car and asked for my information. I handed over my passport first, which is kind of like playing a trump card because HELLO CANADIANS ARE AWESOME AND EVERYONE KNOWS WE ARE POLITE AND NICE AND WANT NOTHING MORE THAN TO EAT POUTINE.

Sure enough I could tell the guy was immediately a fan, mostly by the way he exclaimed “Canada!” and started humming as he wandered away with my travel docs. So far, so good.

Since I’d read some travel blogs about what it’s like to drive in Bosnia before I’d arrived (like you are right now, you smarty pants), I had an inkling this unexpected stop was less about an alleged traffic violation, and more about trying to shake a few euros out of an uniformed tourist. My suspicions were confirmed when they waved at me to come over to their car (what the heck, I have to come to you now?), and explained in broken English that turning on a red light was not allowed. Legit I have no idea if it is or not and maybe that’s the case, so I apologized and pulled the whole “where I’m from that’s not a thing and I totally didn’t realize…” spiel. Unfortunately my Canadianisms weren’t quite enough, because Cop #1 pulled out a notepad and said that the ticket was 120 euros and could be paid at a post office or bank. BUT if I just paid him in cash right now…60 euros.

And that’s when I knew I was totally going to win this one.

RELATED: 9 of the best places to visit in Bosnia 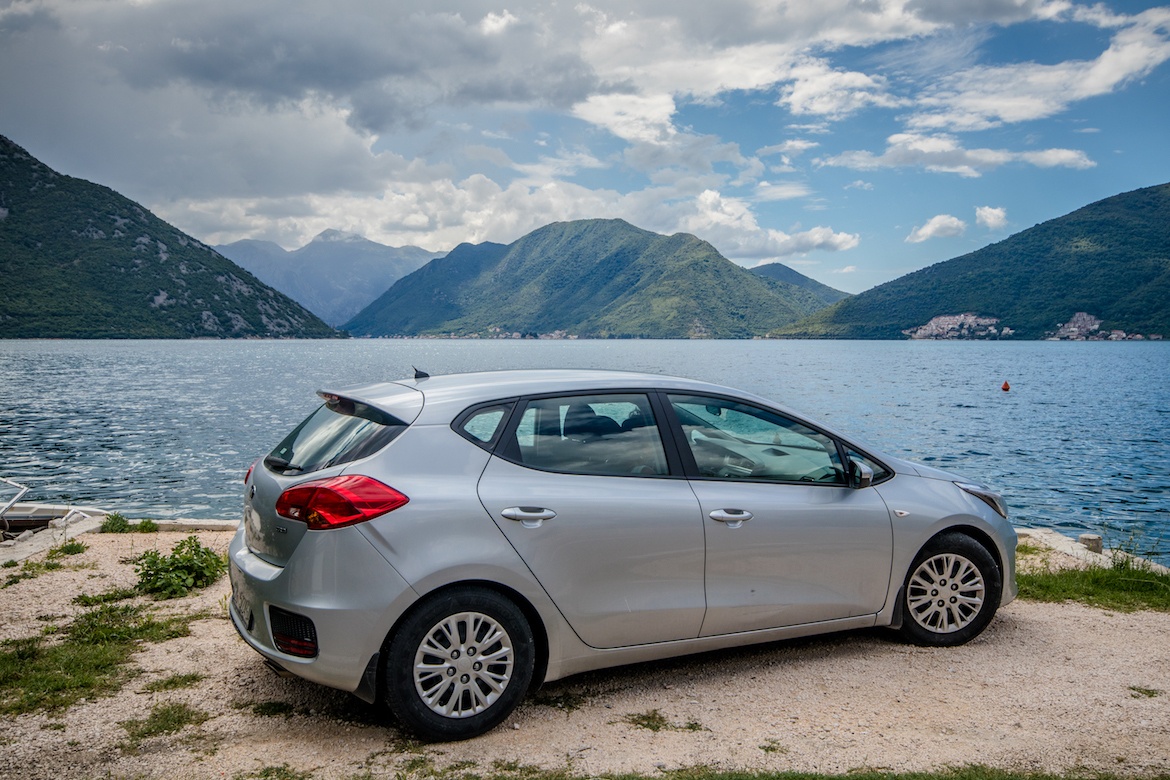 The rental car I drove through the Balkans

I started bartering, telling them I didn’t have that much money on me, but I think I had 30 euros in the car…would that work? The dynamic duo ‘considered’ it for quite a while, and eventually grudgingly nodded. So I went back to the car, reassured my freaked-out mom in the passenger seat that everything was fine and I actually found this whole situation highly entertaining, and asked her for 20 bucks. Yes, 20.

I went back to the police car (seriously why was I the one having to run back and forth?!) and with big puppy eyes explained that a 20 euro note and 1 euro coin was all I could find since we didn’t bring much cash with us on our day trip. Would they accept it?

Of course they were all like “no, 30 euros!” and pointed to the chicken scratch Cop #1 had carved into what was basically a Post-It note, but I emphasized that was all the cash I had, and if they wouldn’t accept it then I would just go pay the 120 euro fine at the bank. After an Oscar-worthy performance between the two policemen full of exaggerated sighs and ‘discussions’ about my offer (let’s be honest, they were probably actually chatting about the score in the soccer game) they took the 20 euro bill, and left me the coin. Bahahaha.

Once we’d reached our agreement, Cop #1 filled out a very official-looking receipt while Cop #2 and I chatted about which great spots around Mostar I planned on seeing that day, and how bloody cold it is in Canada and why do I even live there. Seriously, it doesn’t matter where you are in the world, all anyone ever wants to talk about is the weather and why Canadians are crazy enough to build homes in a place where there are polar bears.

Anyhoo, once I got my ‘receipt’ we shared smiles, wished each other a nice day, and drove off. As one does, after paying off police in a developing country. So, based on my little Balkans adventure, here are five tips I have to share for anyone planning on doing a Bosnia road trip.

OK so this is pretty obvs. Don’t do anything wrong in the first place, and hopefully you won’t get pulled over. I drove across the entire country, and there were police EVERYWHERE so it’s best to just obey the speed limit and traffic laws no matter where you are to avoid any potential issues.

Having small bills on hand was key to weasaling my way out of a hefty fine. We all know what would’ve happened if I’d talked my way down to a 30 euro ticket, then only had a 50 euro bill to present. No bueno. So, only keep a little bit of cash in your wallet in case you need to physically show the police that you don’t ‘have any more’, and hide the big boys.

I usually don’t bring my passport with me on day trips, but this happened to be the one time I did and boy did that ever work out well. If you’re driving in the Balkans, keep your ID on you at all times (passport, driver’s license) and make sure that your rental vehicle has the proper registration required for driving in the country. You might also want to spring for an International Drivers Permit; I got one before my trip just to be safe and never ended up being asked to present it, but you never know… 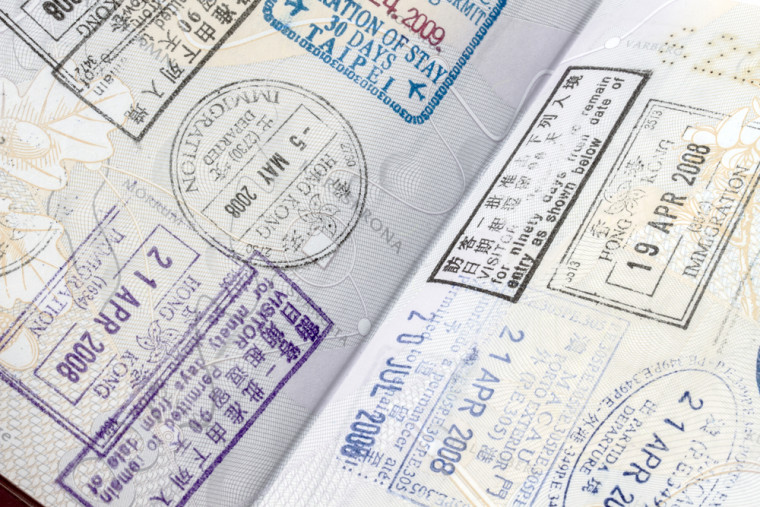 Driving in Bosnia can be a serious exercise in patience. The main highways are in excellent condition and there aren’t any toll booths which is greatly appreciated (I’m looking at you, France and Croatia); however that doesn’t always mean it’s smooth sailing. The drivers can be absolute maniacs when it comes to passing, and some roads are so narrow that two vehicles physically can’t fit at the same time which gets super awkward when there are already 10 cars behind each of the two semis engaged in a stand-off. True story. Oh, and sometimes you have to wait for sheep to meander across the highway. 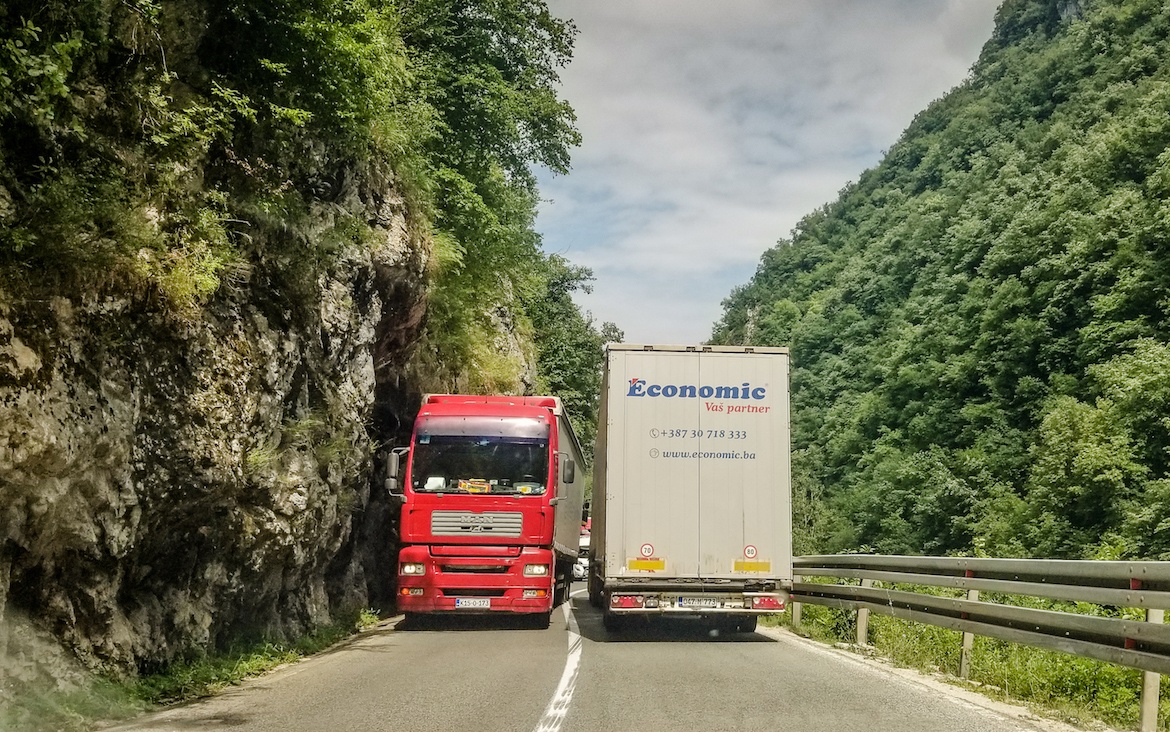 The Great Truck Stand Off begins… 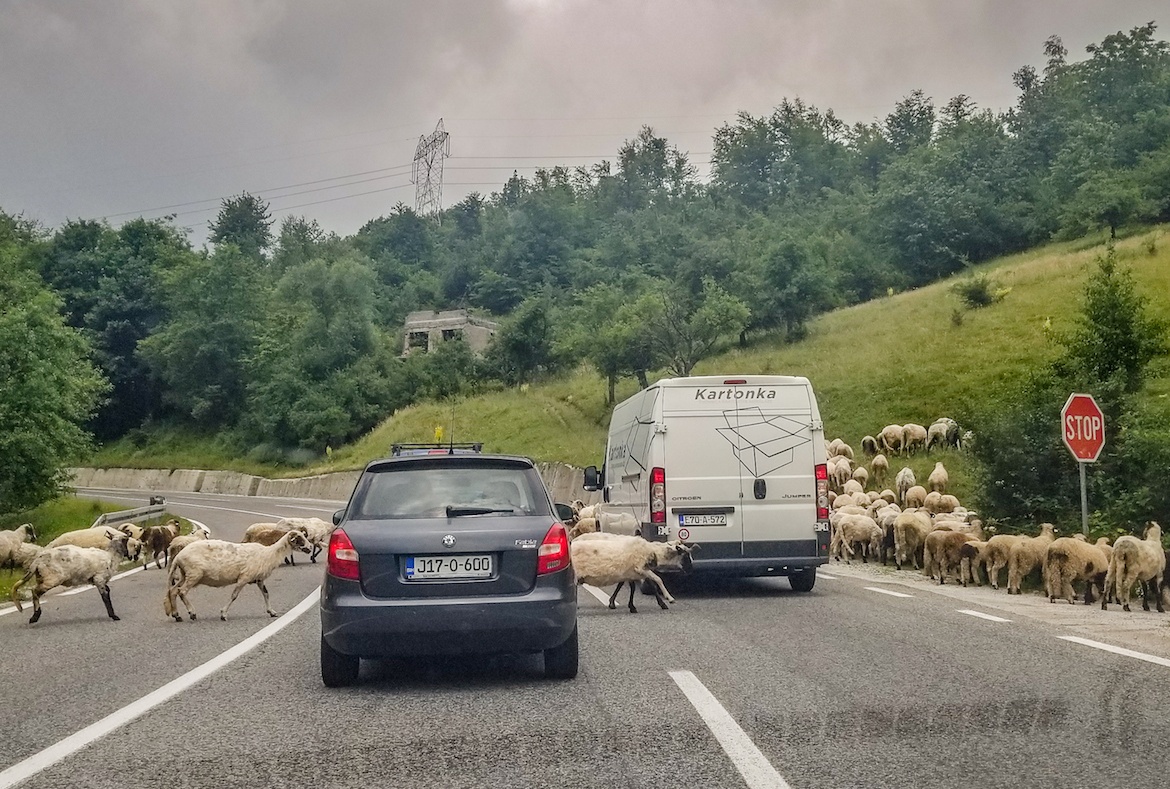 5) Have Bosnian currency on hand

Depending on where you go in Bosnia, some places have no issue accepting euros while others will only take the convertible mark (BAM), so if you’re travelling by car you’ll definitely want to keep BAM on hand. I had an epic fail with this in the town of Jajce, where I saw a slot in the parking meter and stuck my credit card inside since I didn’t have any BAM handy. Sure enough, it ate it. FML.

But since I apparently have a well-travelled guardian angel that follows me around, the parking enforcement officer just so happened to show up at that exact moment, and unlocked the machine so I could retrieve my credit card. Learn from my mistakes, people. 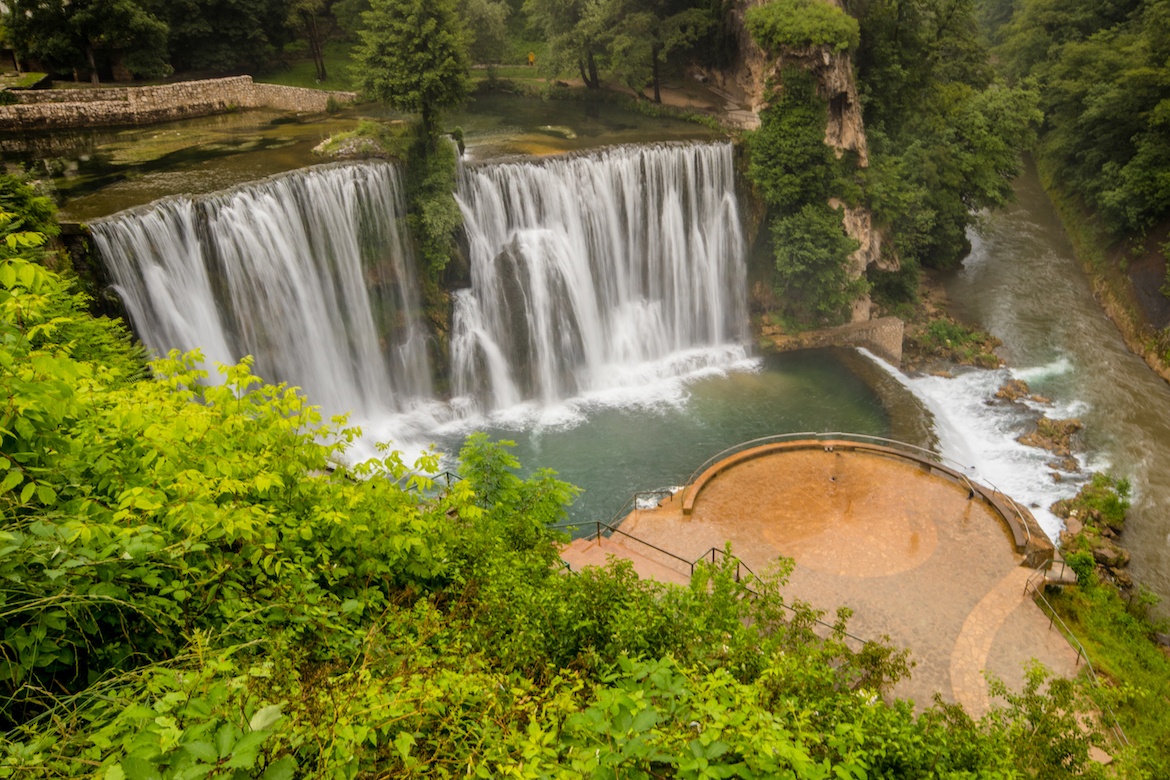 The waterfall in Jajce is gorgeous, but make sure you properly plug the parking meter before heading down to see it!

OK so that was probably a lot of intense info, but if I were to do that trip all over again I’d still definitely rent a car in Bosnia and recommend others do the same. The scenery is absolutely stunning, and there are plenty of adorable towns worth stopping in which you can’t always do if you’re stuck on a tour bus. Just be sure to follow my five tips for driving in Bosnia and you should be fine…provided you hide your big bills. 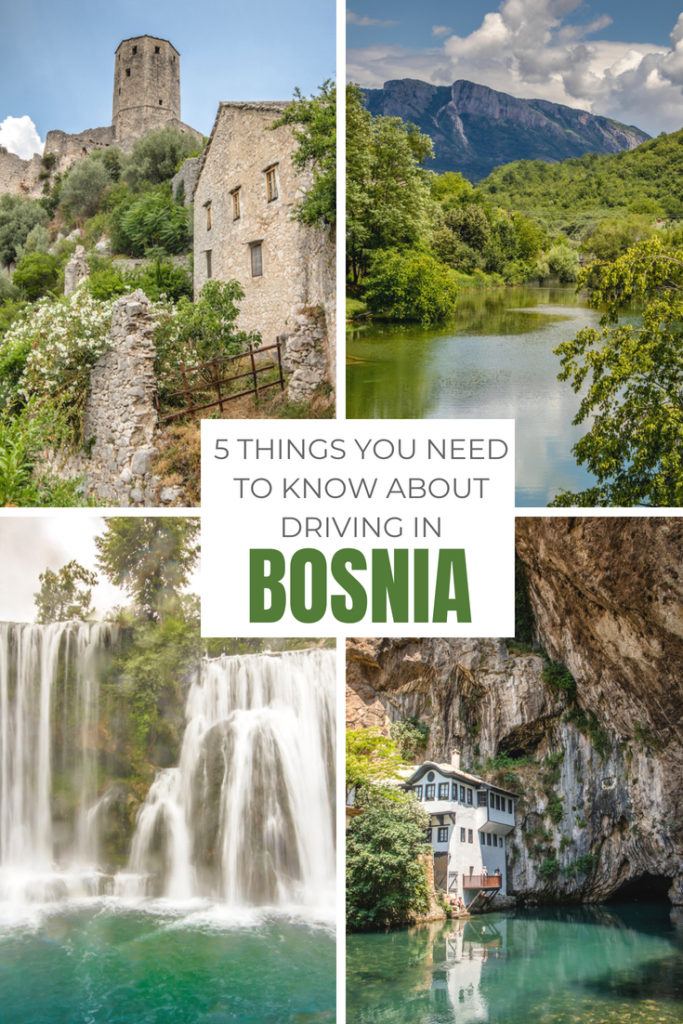 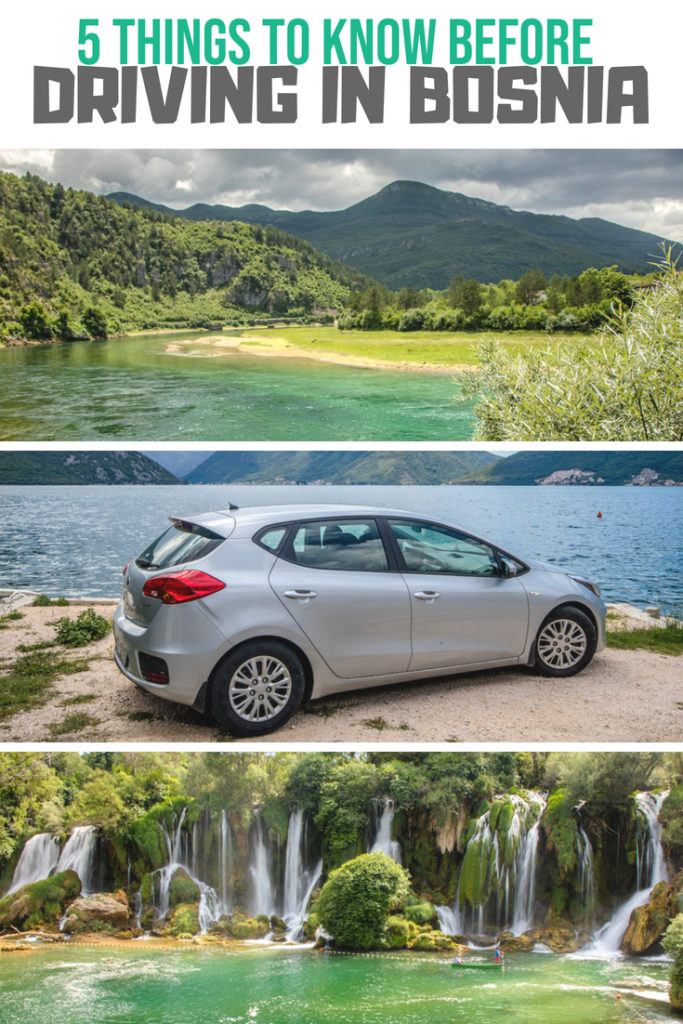 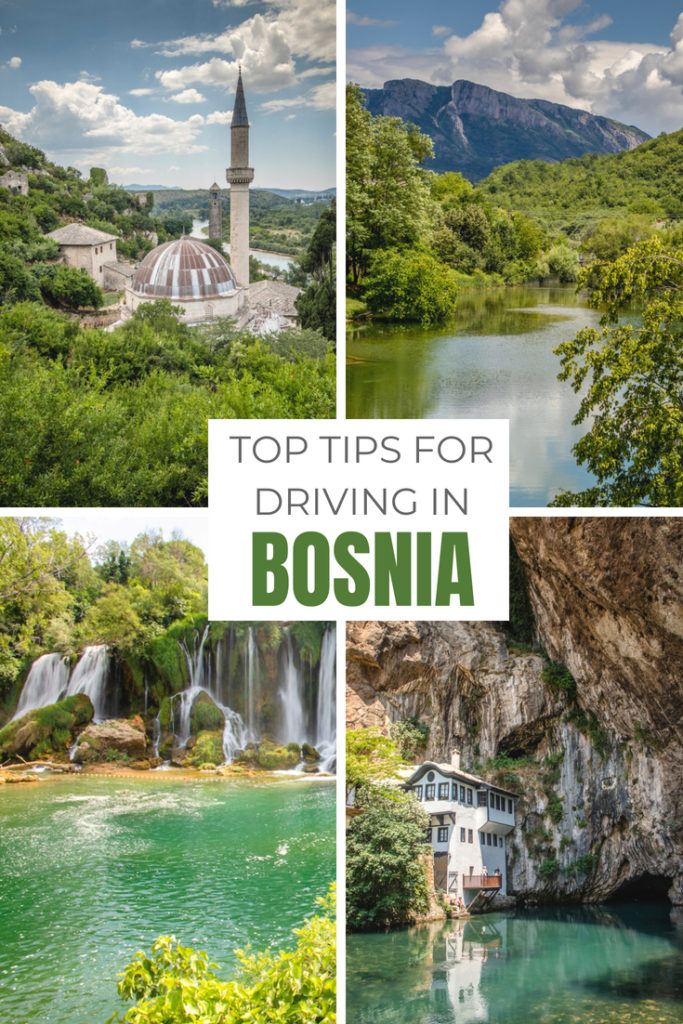 
Error: API requests are being delayed. New posts will not be retrieved for at least 5 minutes.