Those were my first words as we headed away from the airport in our rental car, and made our way into the steep, rolling hills of San Francisco. It was still early in the morning, so the city was still clouded in puffy white fog, and you could see the white houses tucked into the hillside peeking out from underneath. Soon, we were greeted with a glimpse of the glittering blue waters that are famous in the Bay area, as we continued to make our way towards downtown.

“Now THIS is a city,” I thought to myself, as we passed by hundreds of the Victorian-era townhouses San Fran is famous for, which offer curb appeal that would make any suburbanite jealous. Those classic cable cars went rumbling down the road, packed with tourists, as we did our best to navigate the confusing streets en route to our hotel near Union Square.

But soon…it all changed. 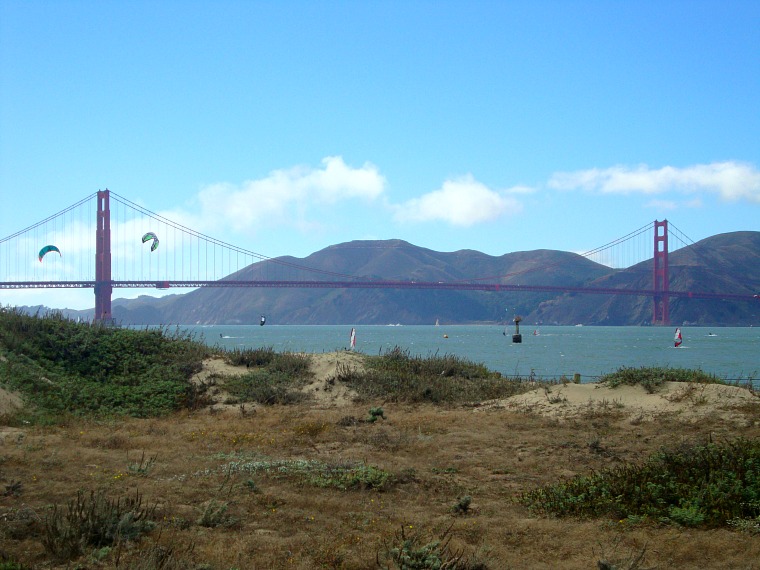 In my many travels around the world, I have never been as unnerved simply walking down the street, as I was on a daily basis in San Francisco. To sum it up, San Fran is a city of contrasts. You’ll pass the towering luxury stores of Saks Fifth Avenue, Tiffany & Co. and Barneys, and then just a block away happen across an entire block that reeks of bodily fluids, serving as a home to at least one crazy person screaming obscenities at the top of their lungs. A couple, who have obviously seen better days, argue as they walk towards you, and casually discard their used coffee cups and sandwich wrappings on the ground like they’ve never even heard of a garbage can before. You try to quickly turn around and to lose yourself in the safety of the throngs of tourists walking along busy Market Street, but not before hopping over a few homeless people who are splayed across the sidewalk, hoping none of them reach out towards you.

You have been warned.

But if you can look past the grime of downtown—or simply choose spend your time on the outskirts—you will be rewarded with an incredible stay in a world-class city, with landmarks and hidden gems that keep people coming back time and time again. 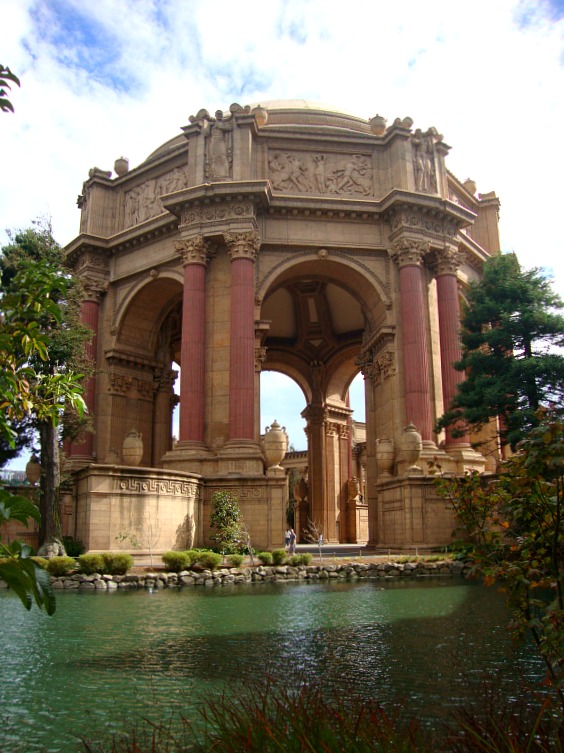 Without a doubt this is the most famous bridge in America, and what San Fran is most known for. And it does not disappoint! There are a number of ways to catch a glimpse of the massive, orange steel structure, whether you choose to view it from a distance or travel over it.

The bridge is the gateway to the seaside town of Sausalito and Muir Woods, and can also be used to get to wine country if the Bay Bridge is closed. So, if you plan on visiting any of these areas you’ll likely get to drive right over it, which actually takes a couple of minutes as the bridge is quite long. Just make sure to keep your eyes on the road if you’re the one driving, as there are six lanes of traffic to contend with! There is a lookout point just before you hit the bridge where you can pull over and get out, to take a photo of this Instagram-worthy spot. 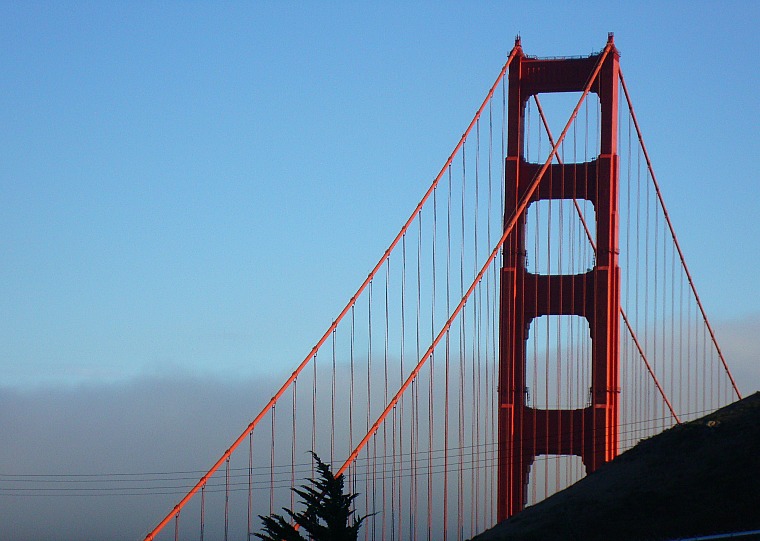 A popular day trip is to rent a bike and cycle across the bridge, which gives you a chance to stop on it and take in the views of the surrounding bay, and even the notorious Alcatraz prison, which was built in the middle of the water so prisoners could not escape. Be sure to dress warm if you go this route, as the wind can be downright nasty! You can also head to Crissy Field which affords views of the bridge. The park is right on the water, and the beach is popular with kite surfers as it is so windy. This is NOT the place to go if you want to work on your tan, as the whipping wind makes it quite chilly. Regardless, you’ll get a nice look at the bridge, if you don’t mind dodging kites!

One thing to keep in mind is that San Fran is notoriously foggy, so chances are your first look at those bright arches will actually be a bit of orange poking out through the mist.

Do not be deterred! The weather will likely clear at some point during your trip, affording a much better view. In my experience, late afternoons/early evening seems to be a good time to head over, compared to the morning. 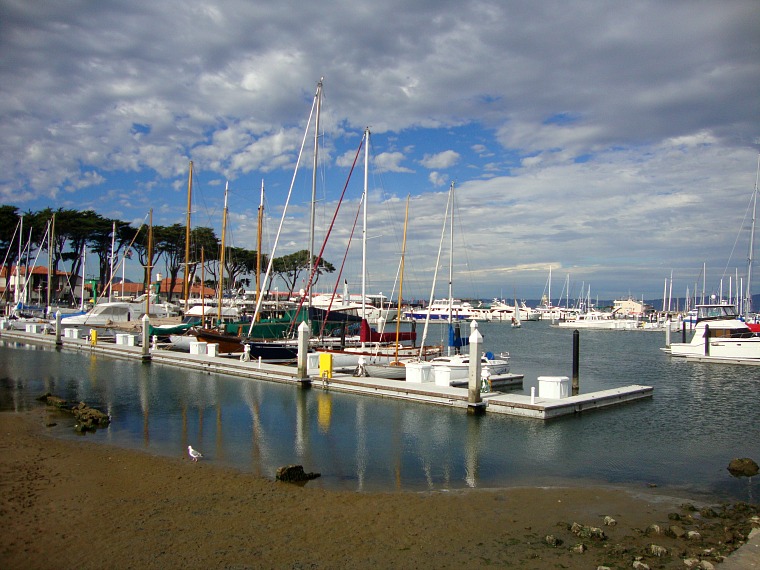 If you don’t like feeling like a tourist, stay away from Fisherman’s Wharf. Otherwise, soak in the seaside! This blocks-long boardwalk along the water is lined with hotels, restaurants and souvenir shops as well as street performers, and you can also rent bikes here.  If you make it all the way down to what’s called Pier 39, you’re greeted with even MORE restaurants and shops where you can get some killer fish ‘n chips, clam chowder and sourdough bread—the things San Fran cuisine is famous for. Pier Market is regularly voted to be one of the best seafood joints in town, and also boasts great views of the water. Make sure you order their signature dish: a bread bowl full of steaming hot clam chowder. 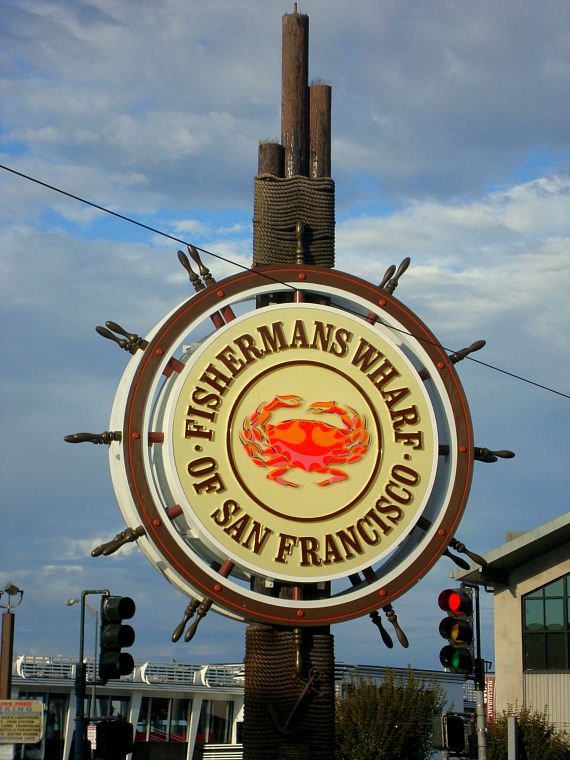 There’s a reason this area is referred to as ‘snob hill.’ Thanks to its spectacular views, Nob Hill features some of the nicest hotels and highest-priced real estate in the city. The neighbourhood is perched on top of large, steep hills that will be the bane of your existence if you try and walk around, but it’s definitely worth a trip just to take in the grandeur.

One of the highlights is the towering Grace Cathedral, which may look familiar for those who have been to Paris. Yep, it was built as a near-replica of stunning Notre Dame, the famous gothic church. It also features a labyrinth laid out on the floor, and visitors are welcome inside every day. The church also offers a cathedral tour which grants access to the South Tower for incredible views of the city. The 90 minute tour costs $25 per person.

Just a block away are a couple of beautiful hotels—the historic Fairmont and the InterContinental. YOU MUST NOT MISS THIS! Here’s the deal…

The InterContinental Hotel has a lounge on the 19th floor called Top of the Mark. Since the hotel is already so high up, the restaurant offers unbeatable, panoramic views of the entire city, and makes the most of them with tables pushed up against the huge windows. We totally lucked out when we went, and got the best table in the entire place, which is to the right and around the corner when you walk in. Try to get there about an hour before sunset, so you can capture the beauty of the city in all different lights. And if you are lucky enough to snag that great table, don’t be surprised when other diners keep coming over to snap pictures from your vantage point! Top of the Mark is a great place to spend the evening regardless, as it has a dance floor, crazy-long martini list and delicious appetizers. The restaurant is also open for breakfast.

Sunset from Top of the Mark.

Ever watch the TV show ‘Full House?’ If you were a kid of the 80s there’s no doubt you’re familiar with the Tanner family, which means you also know all about that iconic row of Victorian houses that was shown in the show’s intro. The ‘Painted Ladies’ are in the quiet Haight-Ashbury neighbourhood, and feature bright facades and perfectly trimmed foliage. The historic homes are located just across from Alamo Square Park, which is where most tourists set up their tripods for that famed photo. To be honest there isn’t a lot to do around here after you get that coveted picture, other then take a quick walk through the park—but a stop here should still be on everyone’s itinerary! 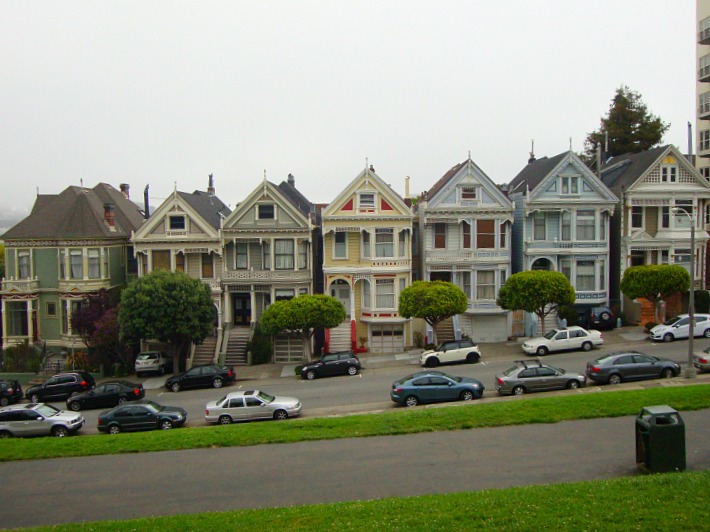 And now, to the centre of the action…Union Square. If you love shopping, this is your place. Union Square itself is a well cared for plaza right in the middle of downtown, which houses full palm trees, heart-shaped statues and a couple of coffee shops with outdoor seating—perfect to soak in the surroundings. The real draw is everything that surrounds the square, which includes high-end retailers, shopping malls and luxury hotels. Fashionistas will appreciate stores like Saks Fifth Ave, Bloomingdales, Chanel and Burberry. For those on a budget (read, 99 per cent of us), you’ll want to head over to Westfield San Francisco Centre which houses dozens of stores with more reasonable prices. There are also a number of shops lining the streets all around Union Square, so make sure you have your credit card handy!

Union Square is also a great location to stay in San Francisco, and there is no shortage of accommodation in the area—regardless of your budget. Keep in mind, however, that parking in the area is crazy expensive (think: $50 per day) so keep that in mind if you have a car with you. Otherwise, you will find you can walk to many landmarks quite easily, and there are also lots of transit and cable car options in the area. Best of all? You’ll be in the heart of the action. 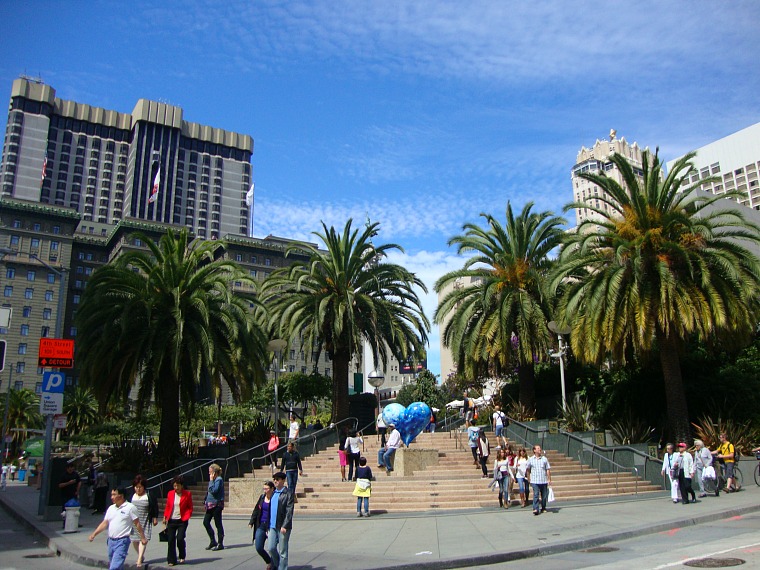 When to go: Many people think that since San Francisco is in sunny California, they’ll arrive to a beach scene complete with people roller-blading in bikinis and diving into the ocean. Wrong. The city is actually quite chilly even in summer, thanks to the foggy air and cool winds. This place is all about layering up, as it can be warm in the sunshine and cool as soon as you get hit with a wind gust. Fall is a great time to visit, thanks to their ‘Indian Summers’ while spring is also pleasant.

Getting around: Rent a car from the airport if you plan on doing out-of-town trips like a visit to Napa Valley or Muir Woods, or aren’t staying in the city centre—where parking at a hotel can set you back a staggering $50 a day! Otherwise, public transit is quite easy to use and the cable cars are always a big draw for tourists, though there are big lines to get on. To get from the airport into the city, hop on the BART, a train which will get you downtown in about 40 minutes for $8 per person.

Must try: The food! The cuisine in San Francisco is world-famous, and for good reason. Like Rome, it’s hard to have a bad meal here! The Tenderloin district is a popular area for gastronomy—if you don’t mind passing through the grungy streets. Head to Honey Honey—aka the best breakfast place ever—which is located on Post Street and Taylor. They do a mean crepe and also serve lunch and dinner. People literally line up down the street to eat here! 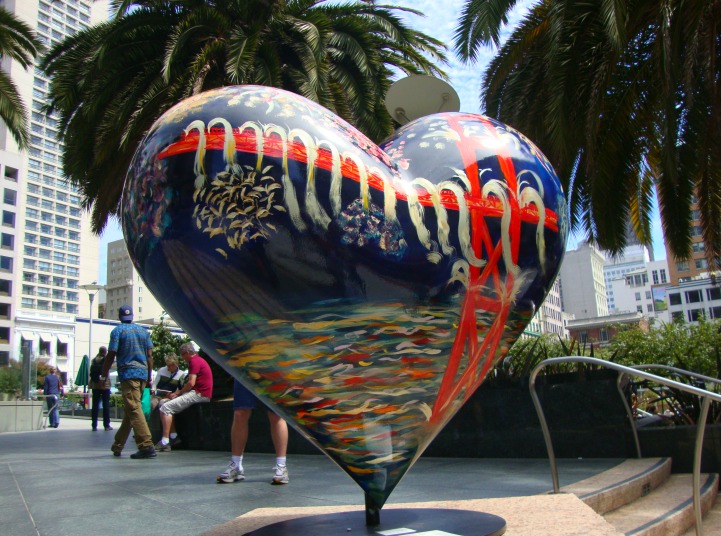 A taste of the Hollywood life in Los Angeles, California

How to explore the statuesque trees of Muir Woods 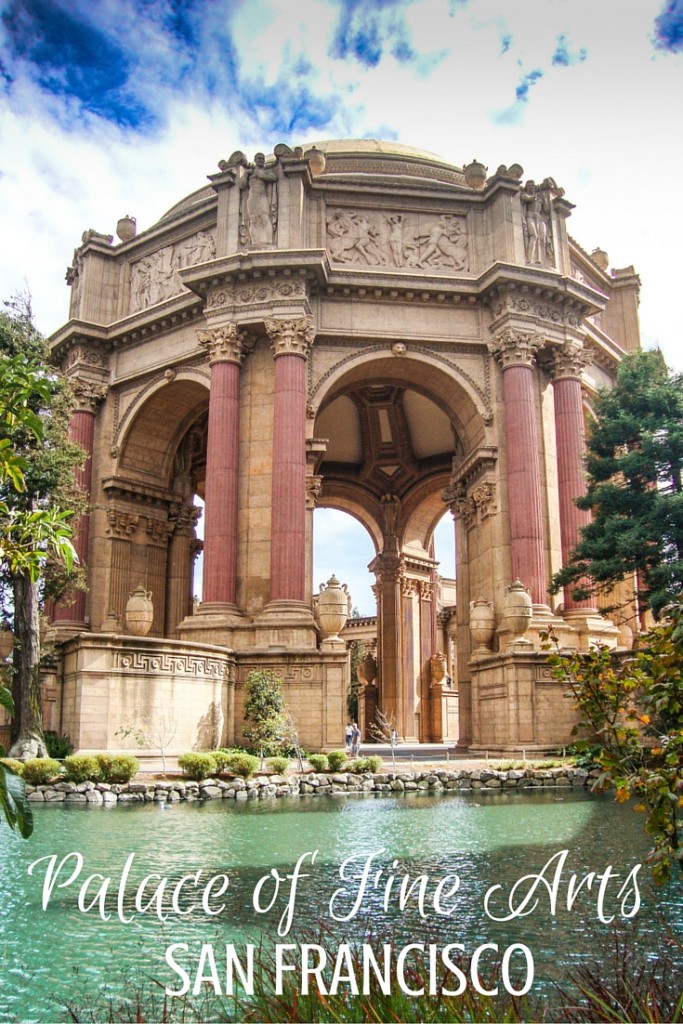