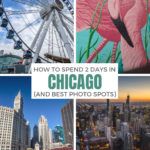 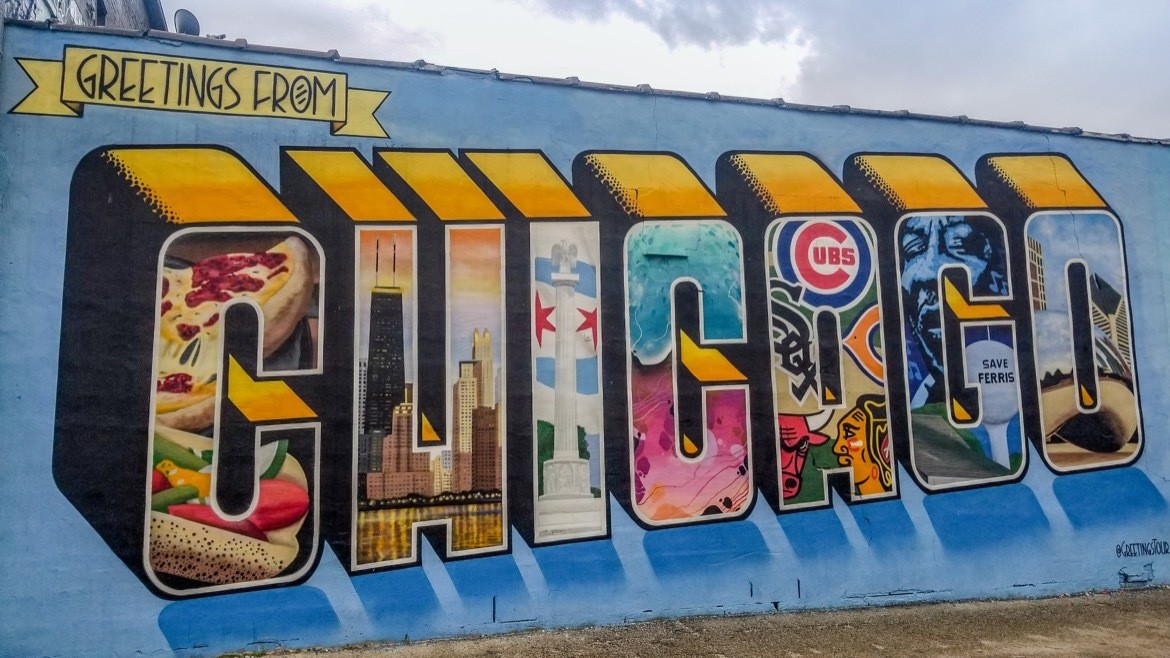 The Welcome to Chicago mural in Logan Square

Home to the beloved Chicago Cubs, America’s best deep dish pizza and architectural marvels, Chicago has long been a top destination for everything from sports-themed weekends to girls getaways, with no shortage of great spots to explore. Often rated as the ‘Best Big City in America,’ Chicago is like a mini New York City in the best possible way: think the same impressive skyline, great foodie scene and cool neighbourhoods, but cleaner, quieter and with less crowds.

The kind of place where century-old buildings, gritty train tracks and historic landmarks seamlessly blend with vibrant street art and flashy storefronts, the Windy City provides plenty of eye candy. From enjoying cocktails high in the sky to the navigating the famed waterways, here’s the perfect itinerary for spending 2 days in Chicago while checking out the best photography spots. 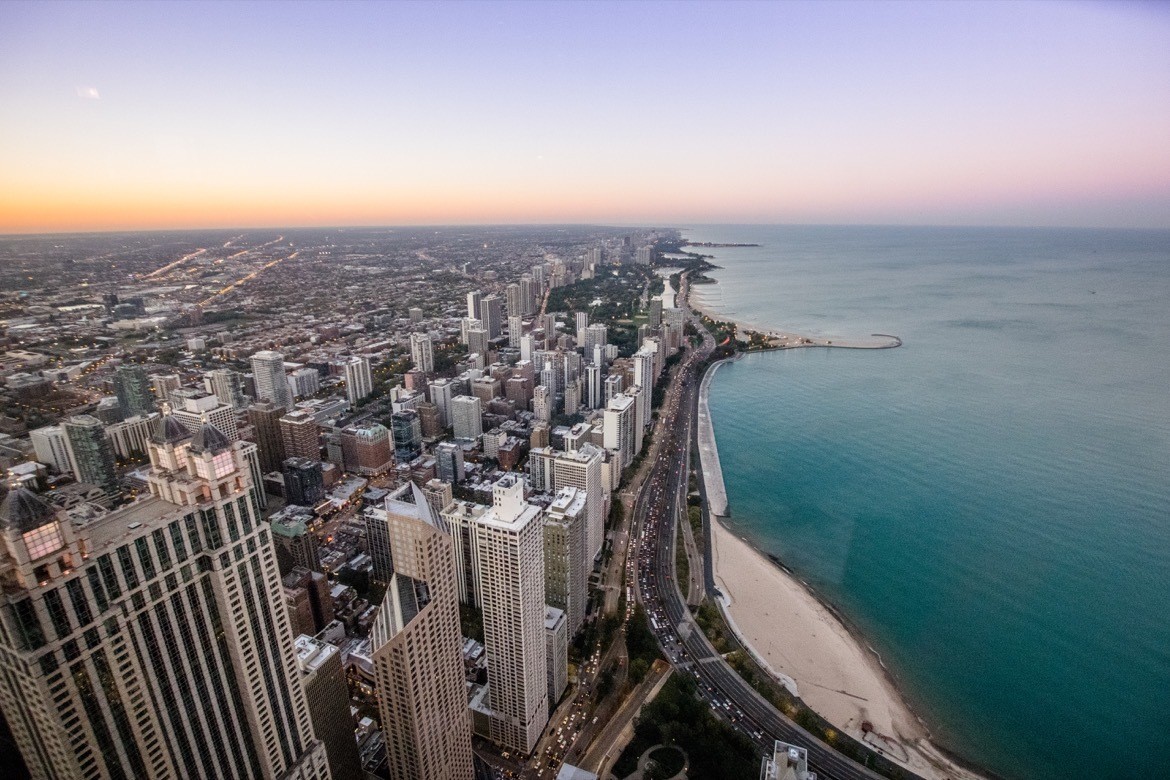 The view from Signature on 95th

Kick off your Chicago trip in the heart of the action, by wandering past the glittering storefronts lining North Michigan Avenue, AKA the Magnificent Mile. This 13-block stretch in the Loop area hosts more than 460 stores including luxury brands like Gucci, Burberry and Louis Vuitton, nearly 300 restaurants, and some of the city’s top hotels. Art aficionados will want to pop into LIK Fine Art Chicago, which displays incredible pieces from famed photographer Peter Lik. Not only are his images of dreamy destinations around the world beautifully captured, but thanks to an innovative printing process the appearance of his works change depending on how bright the lights are in the room. 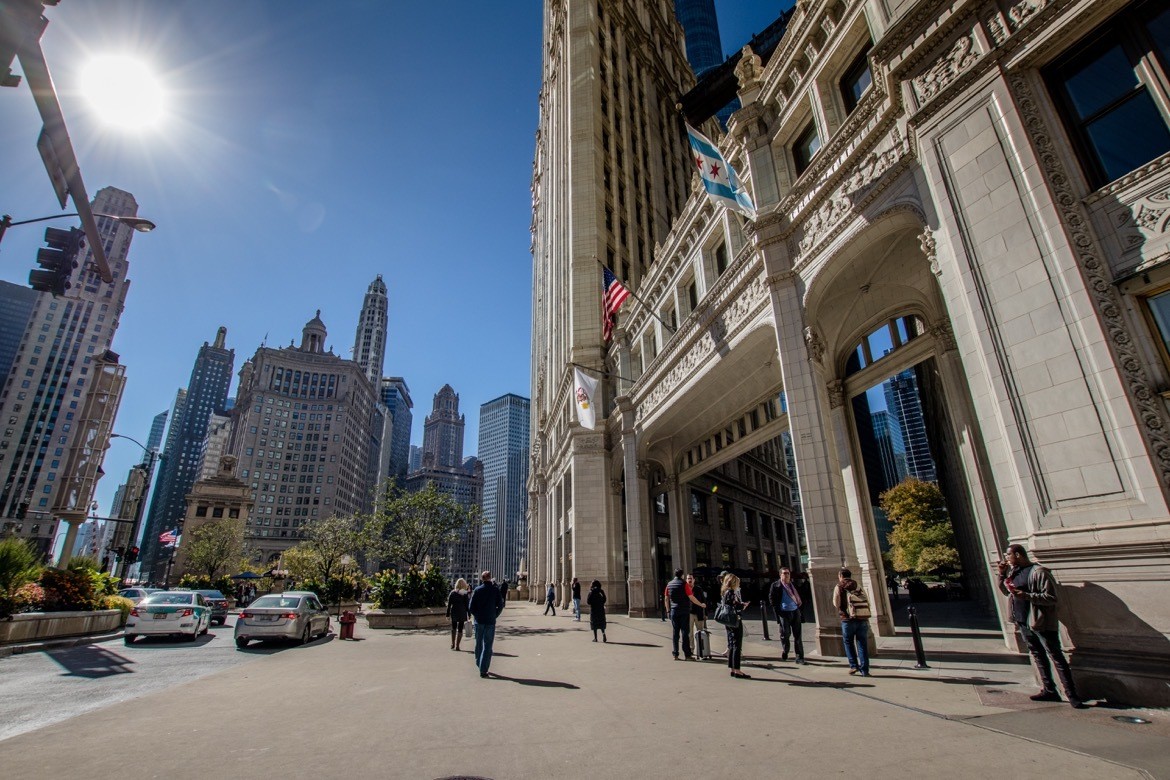 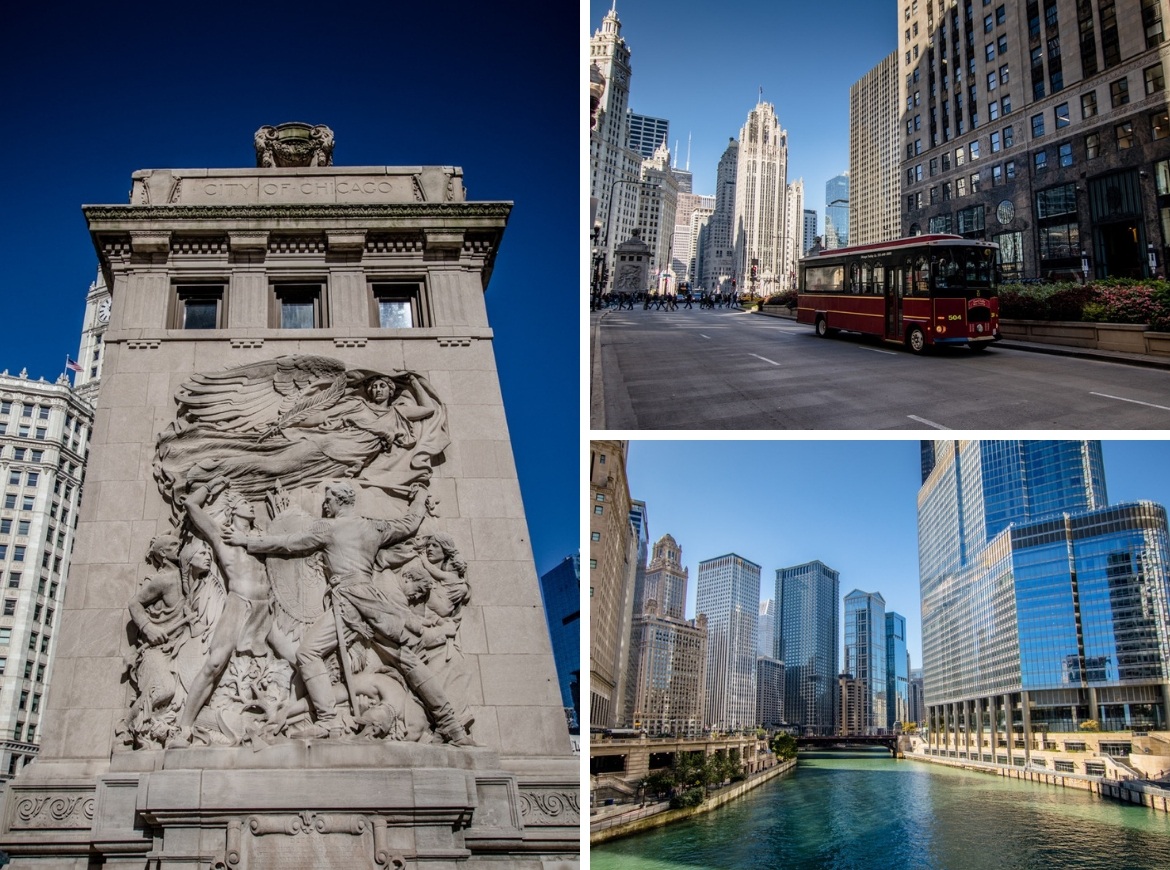 Indulge in some shopping, veer off a couple blocks to grab an espresso at the beloved Italian market Eataly, or continue to the DuSable Bridge for a fantastic photo-op of the emerald green Chicago River surrounded by sparkling skyscrapers. 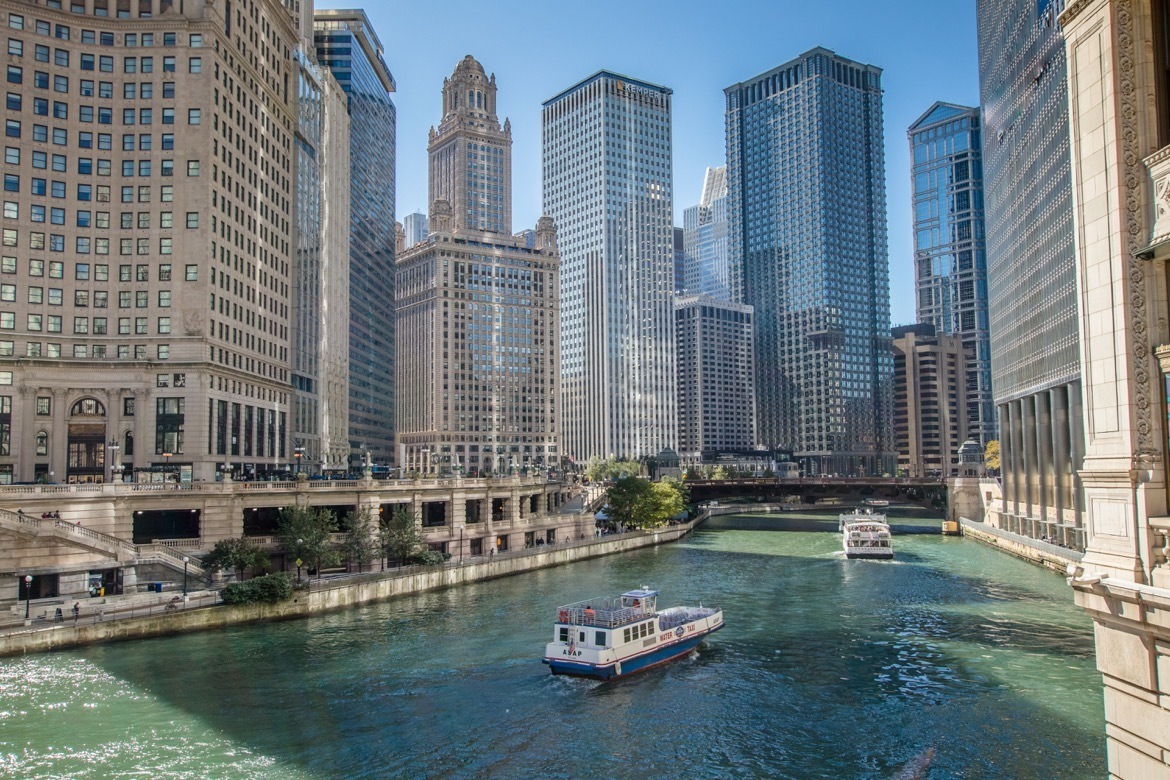 The most iconic spot in the entire city is just a couple blocks further: Millennium Park, a sprawling downtown green space that’s home to Cloud Gate, more commonly known as ‘The Bean.’ The stainless steel plates reflect the surrounding city skyline which makes for some epic shots–especially if you make it there first thing in the morning before the throngs of tourists arrive. Be sure to walk below Cloud Gate’s 12-foot-high arch to snap some cool perspective pics from underneath. 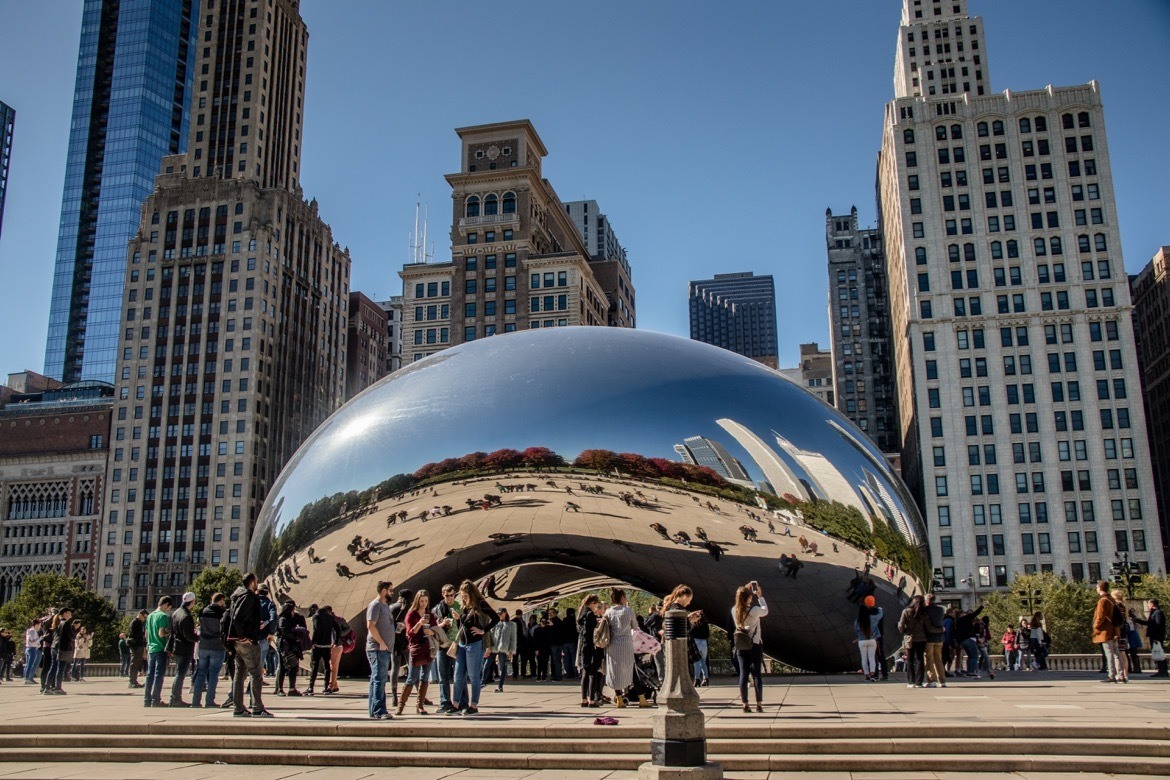 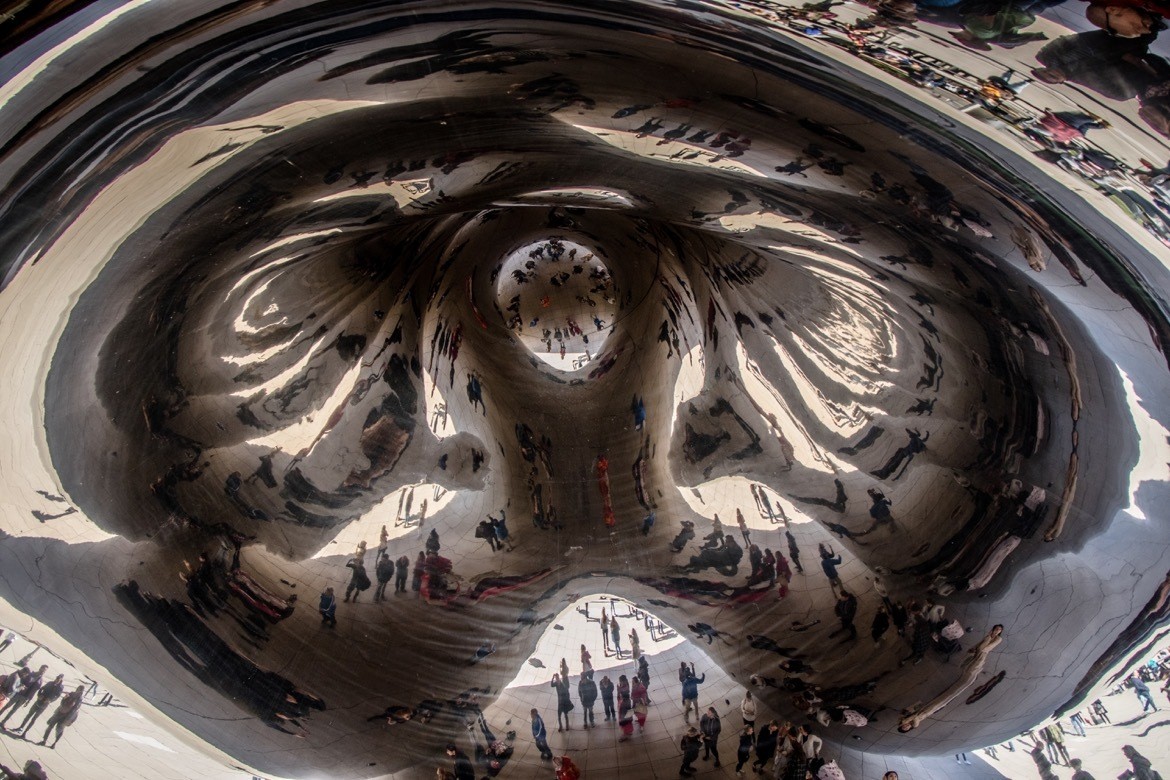 The nearby Jay Pritzker Pavilion is another one of the top Chicago photography spots, which acclaimed architect Frank Gehry designed with a modernist feel. The impressive structure was inspired by liquid mercury, and sees sheets of ribbon-like steel crisscross with pipes to form a frame around the outdoor stage. The pavilion is a popular concert venue thanks to its state-of-the-art sound system which mimics the acoustics of an indoor concert hall, and can accommodate up to 120 performers at a time. 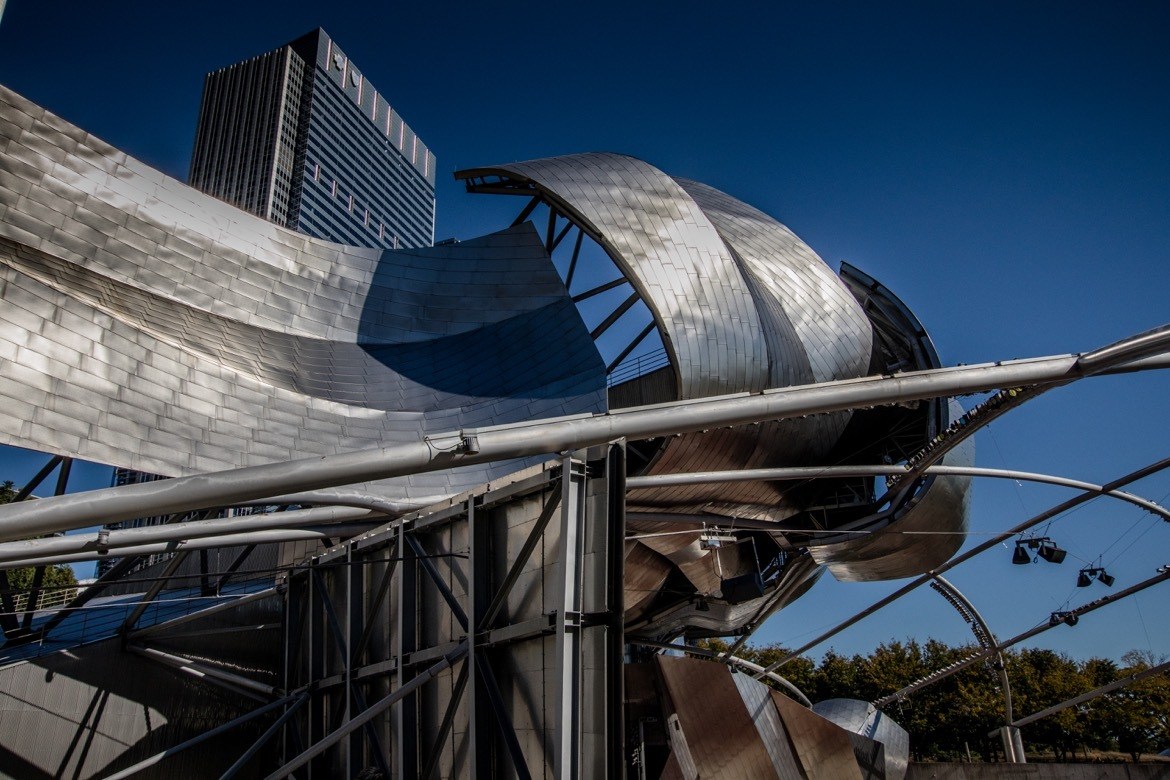 Just across the street from Millennium Park is the Chicago Athletic Association, which boasts one of the best birds-eye views. The historic property has been around since 1893, and for decades was the kind of place where the city’s elite deals got done over a stiff drink, a game of billiards and a handshake.

It’s since been transformed into one of the most acclaimed boutique hotels in Chicago, and the building’s Venetian Gothic influences are apparent in the grand staircases, vintage stained glass windows, detailed mosaic floors and wood burning fireplaces. Head straight up to Cindy’s Rooftop Terrace, where the friendly bartenders will mix you a mean Old Fashioned to take out to the balcony and enjoy sweeping views of Millennium Park, the Art Institute and sparkling Lake Michigan. Be sure to drop into the Game Room on your way out to have a friendly face off over a foosball or shuffleboard table, or try your luck in the bocce bay. 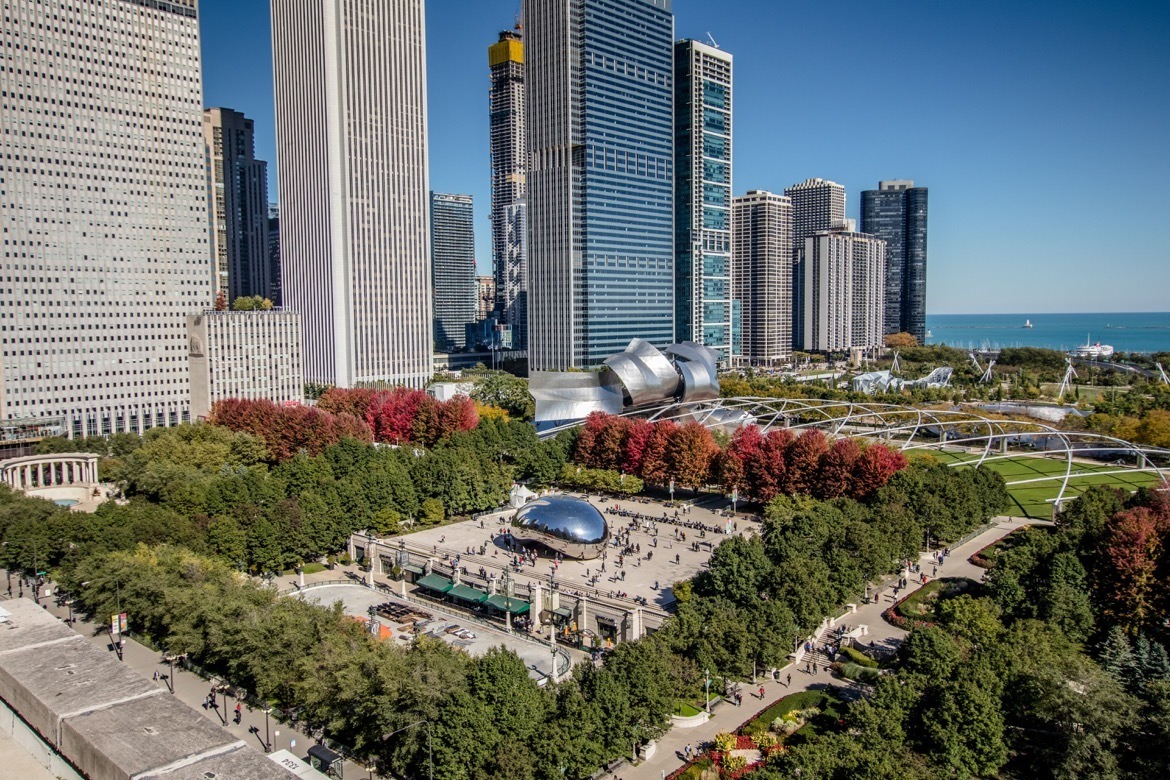 The view from Cindy’s. 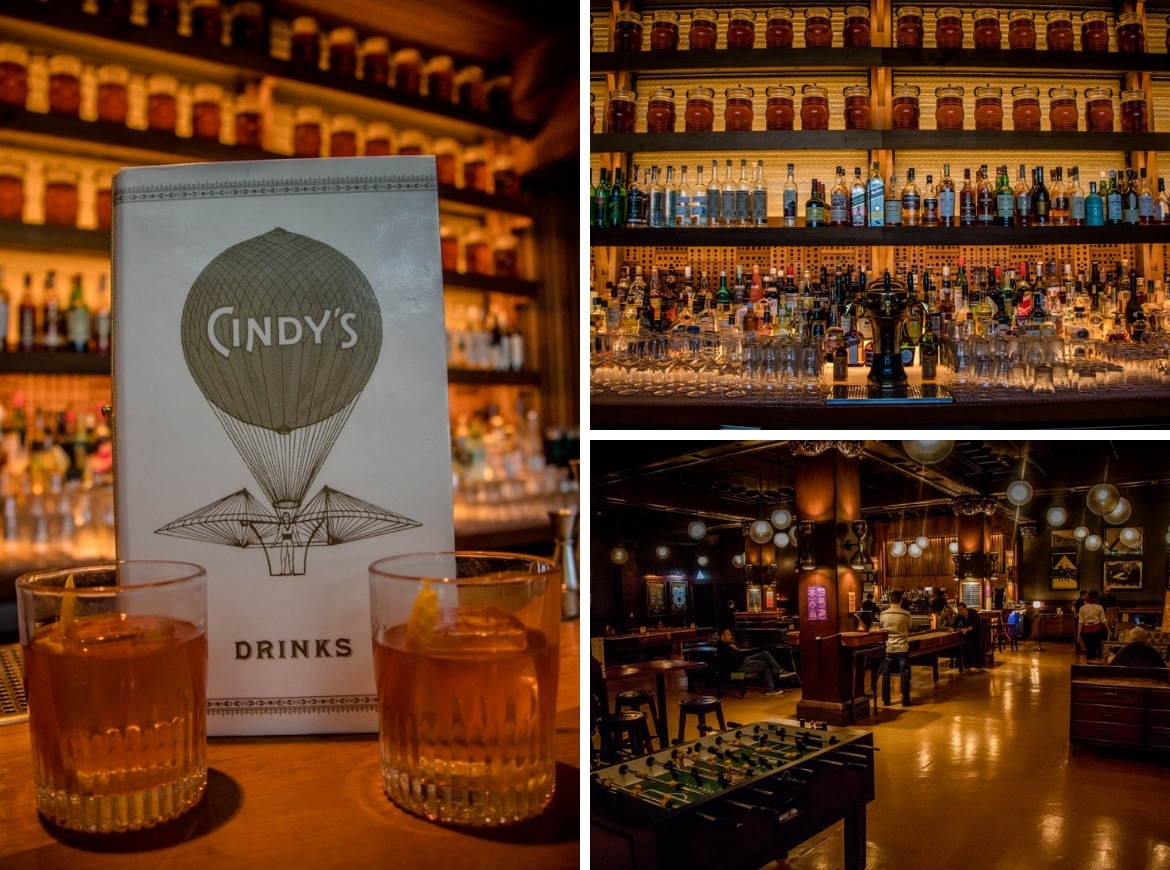 Cindy’s, inside the Chicago Athletic Club

Circle back toward the river, making a quick stop inside Macy’s State Street which is designated as a National Historic Landmark thanks to magnificent touches that make it feel more like a museum than a department store. Of note are the Great Clocks which weigh seven tonnes each, granite pillars that are the second-tallest of their type in the world, and the ornate Tiffany Ceiling which was painstakingly designed from 1.6 million pieces of hand-fired iridescent glass.

Once you make it back to the water, follow it a few blocks west along the pedestrian-only Riverwalk which grants a different perspective of the city from water level. You’re sure to get great shots of the iron bridges, boats smoothly sailing by, people kayaking in the Chicago river, and fun spots like the so-called River Domes at City Winery. There, guests enjoy wine and tapas from the comfort of a see-through, bubble-like dome, complete with comfy loungers and board games which makes it a fun addition to any Illinois getaway. 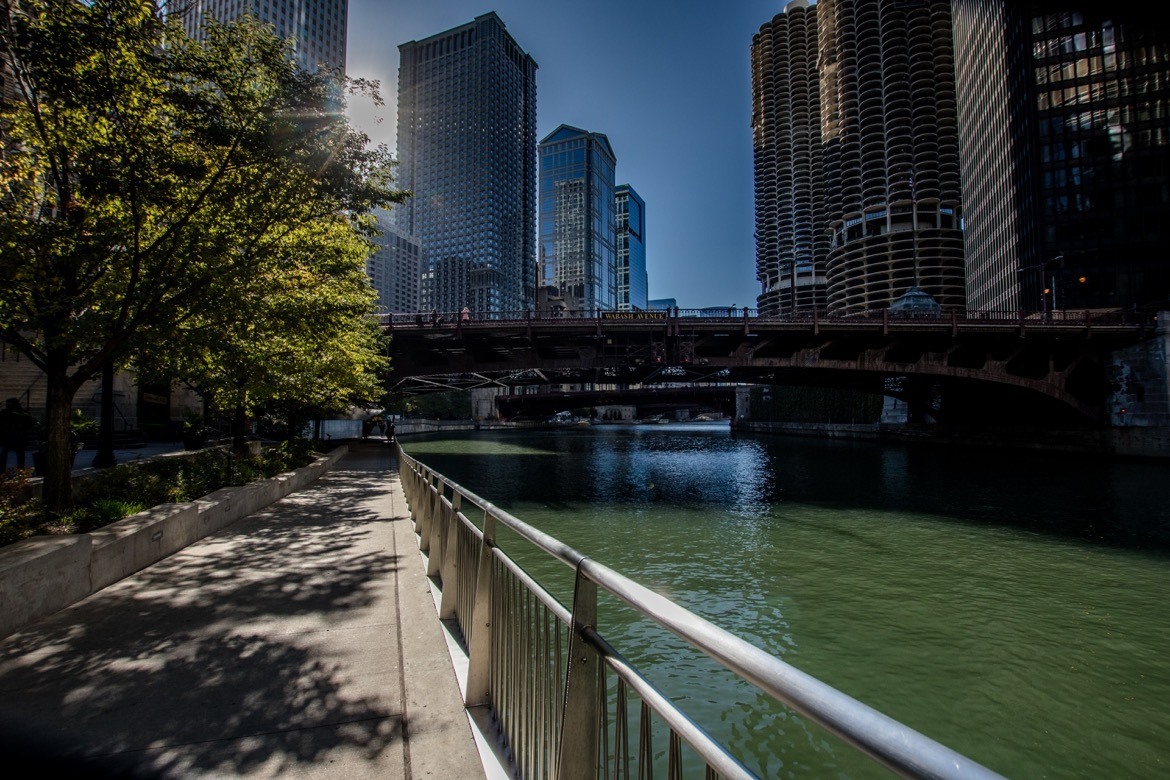 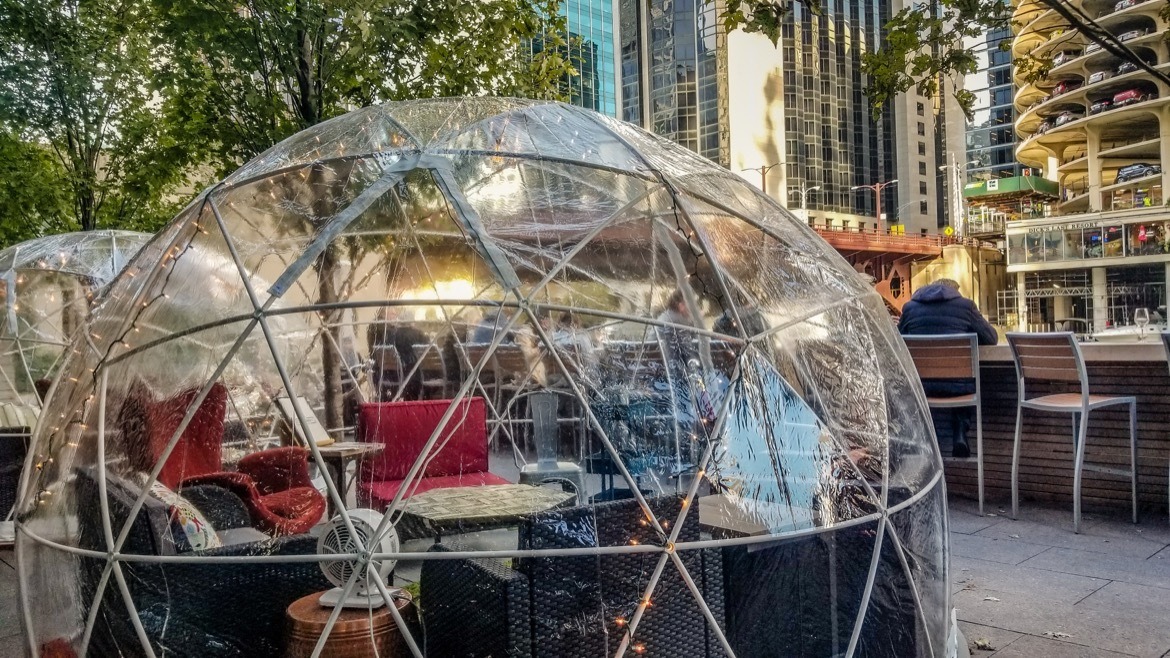 No Chicago day tour is complete without indulging in a some deep dish pizza, so grab a slice at Lou Malnati’s on N Wells Street which many locals swear is the best joint in town (or Giordano’s, or Gino’s East, depending who you ask). From there it’s only a couple more blocks to the Flamingo Rum Club, which is known for its mural depicting a trio of larger-than-life, fluorescent pink flamingos…AKA Instagram heaven and one of the best photo spots in Chicago. 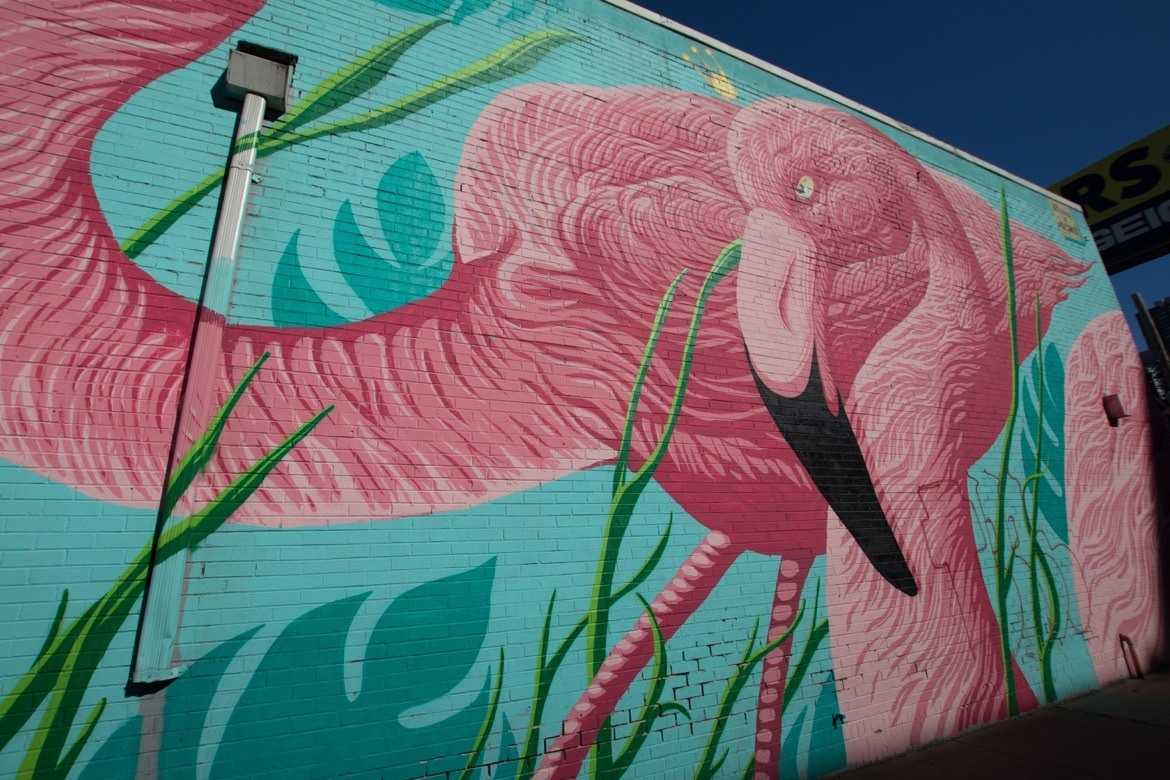 After all that walking, head back to your room at the Dana Hotel and Spa in the chic River North neighbourhood to freshen up ahead of the night portion of your Chicago itinerary. The design-forward property wows from the moment you walk through the multi-storey, airy foyer, which is accented with geometric seating and light fixtures that set the tone for the surrounding ultra luxe spaces.

On-site amenities include an acclaimed spa and multiple restaurants, like the rooftop Apogee Lounge where the in-crowd comes to sip hand-crafted cocktails and soak in the views, making this one of the best boutique hotels in Chicago. 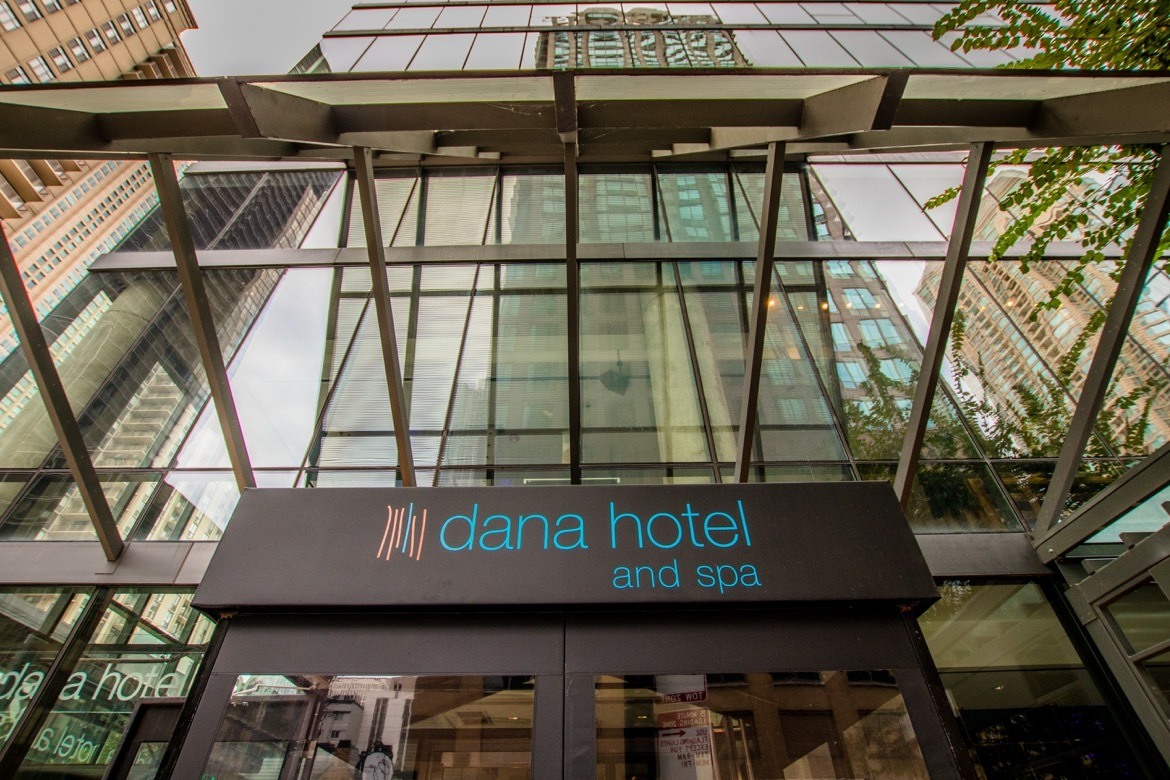 The Dana Hotel and Spa 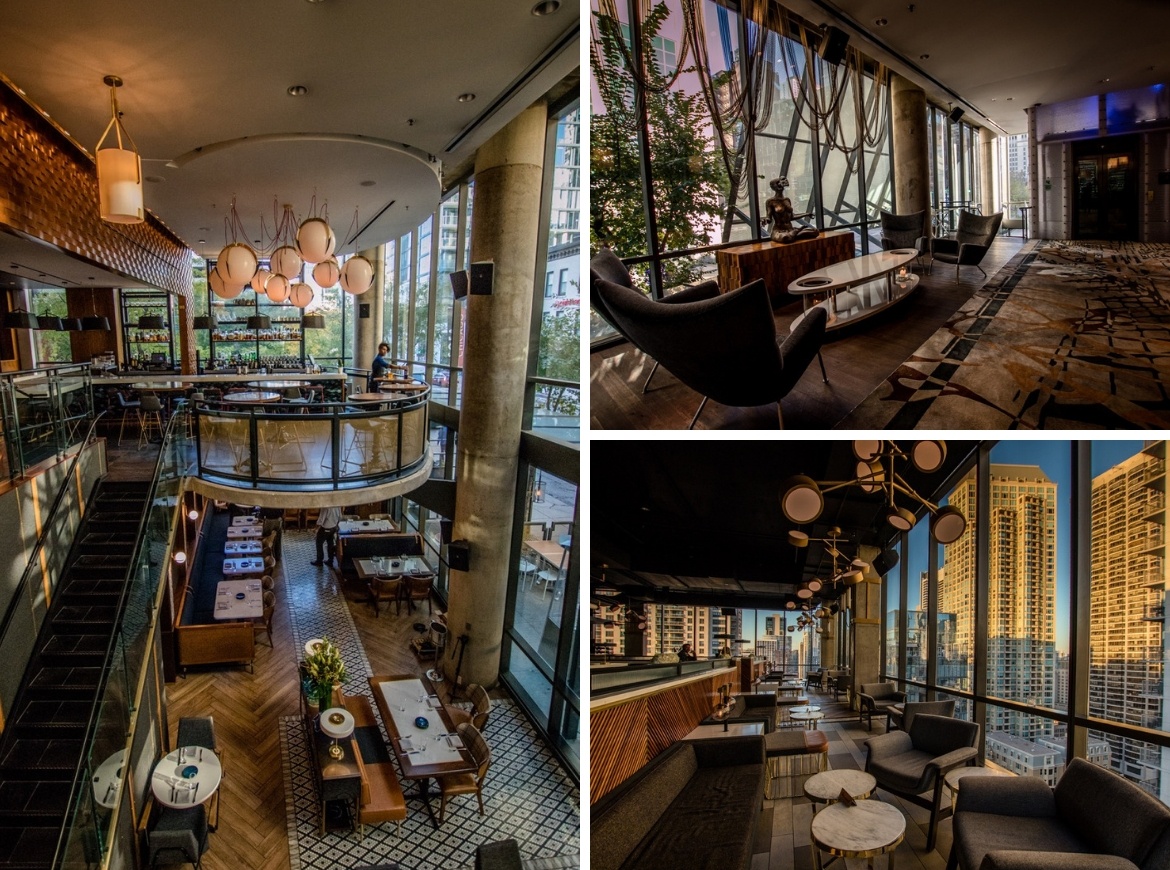 The Dana’s modern rooms are a tranquil respite from the city, with floor-to-ceiling windows, spa-like bathrooms with rain showers and plush robes, and soothing earth tones throughout. Some also have private balconies and in-room wine reserves, which it’s worth noting are incredibly well-priced by hotel standards. Try and score a reso in the blissful Utopian Suite, which has a separate sitting room, closet area and fully-stocked wet bar. Click here to book 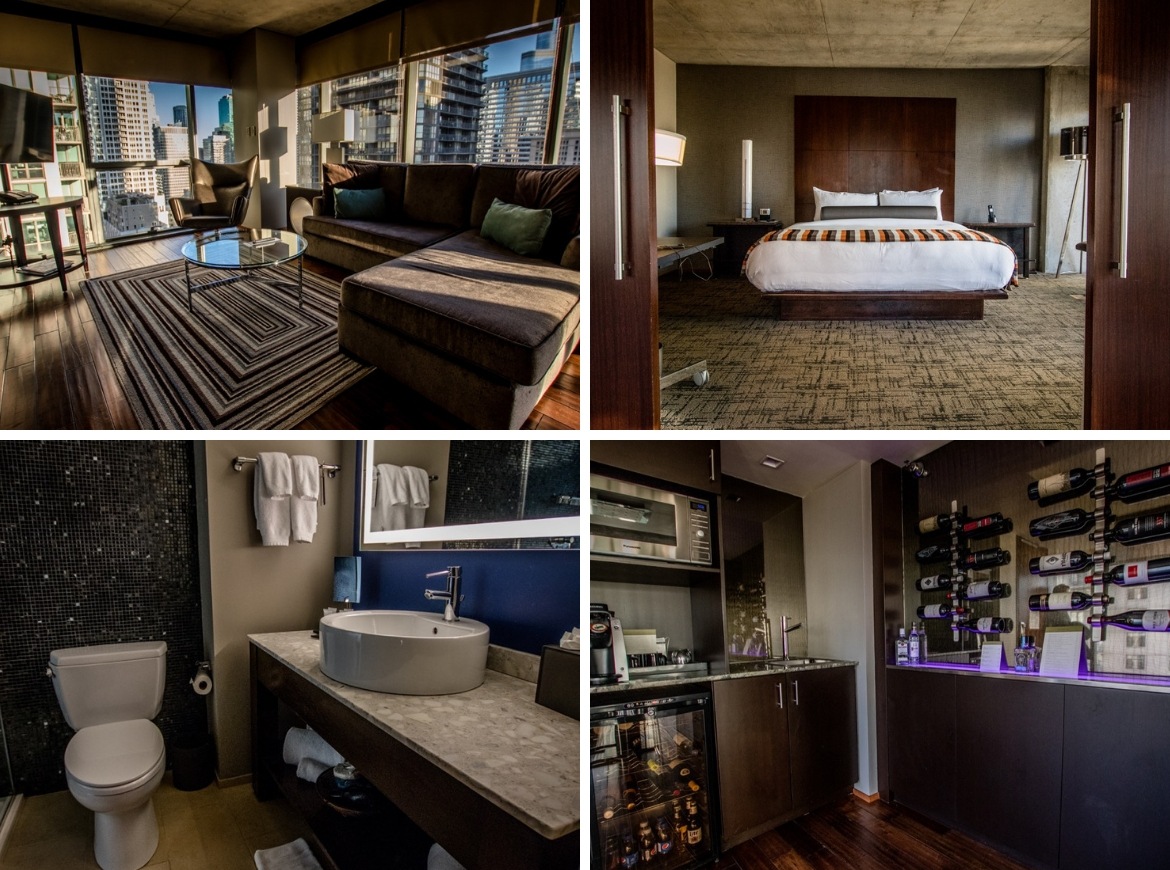 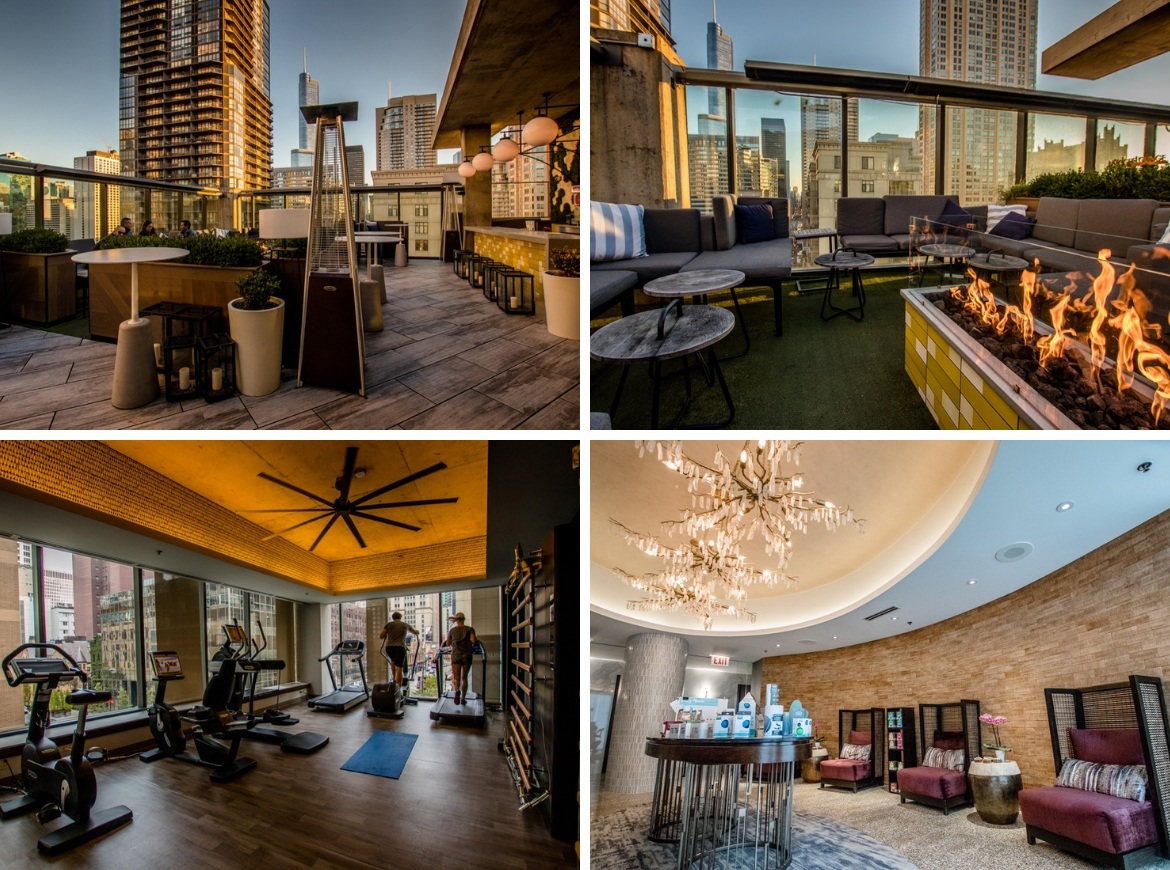 Cap off your day of Chicago sightseeing by heading up to one of the highest spots in town, The Signature Room at the 95th. Found on–you guessed it–the 95th floor of what was formerly the John Hancock Center, this upscale dining destination features panoramic views of the entire city, and its romantic setting makes it a popular spot for proposals. Reservations are recommended.

Photo tips: Sorry gents, the best view in the whole place is from the women’s washroom in The Signature Lounge on the 96th floor, where floor-to-ceiling windows overlook downtown. Time your visit to arrive just before sunset, to see the skyline bathed in different lights. 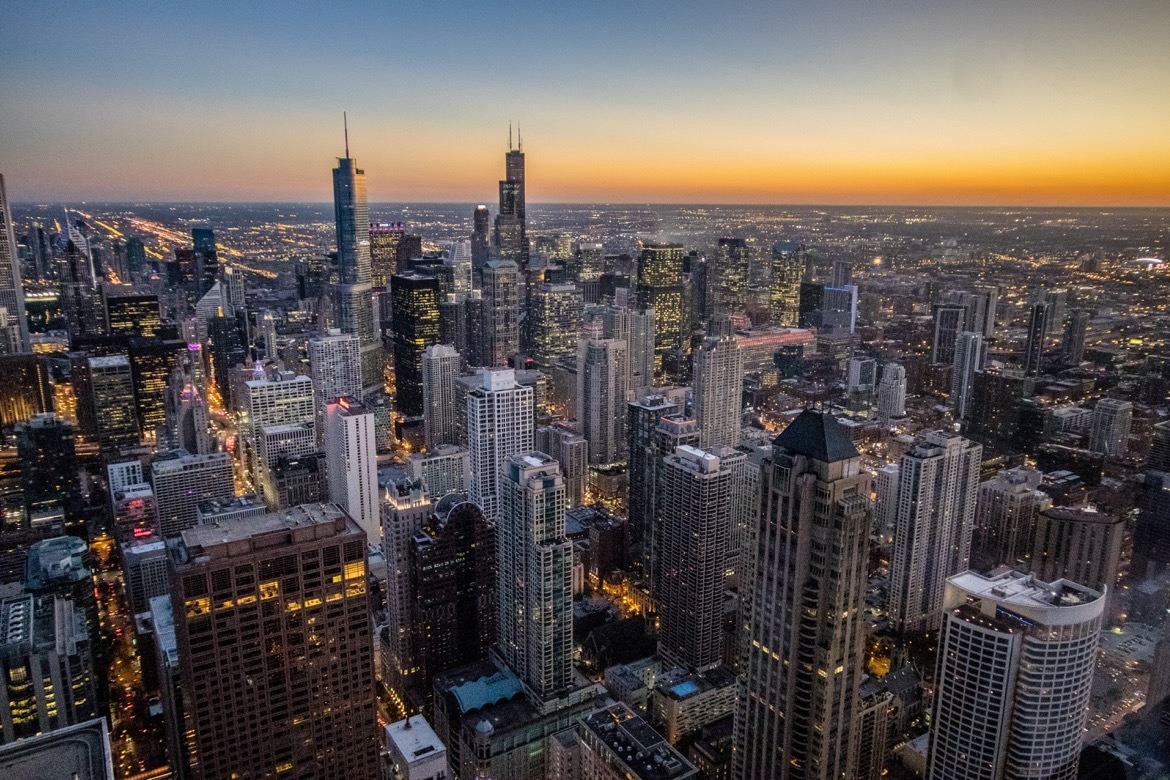 The view from Signature on 95th

You’ve got another big day ahead, so start with a java jolt from Sawada Coffee, found in the effortlessly cool West Loop area. Founded by Japan’s Hiroshi Sawada who’s a world champion latte artist (yup, that’s a thing), his industrial-style cafe featuring a pinball machine, punching bag and ping pong table is hipster heaven. Order the photo-worthy Military Latte made with matcha, espresso, vanilla syrup and cocoa powder which has earned a cult following, or sip an iced coffee infused with the Japanese spirit Shochu served in a sake cup. 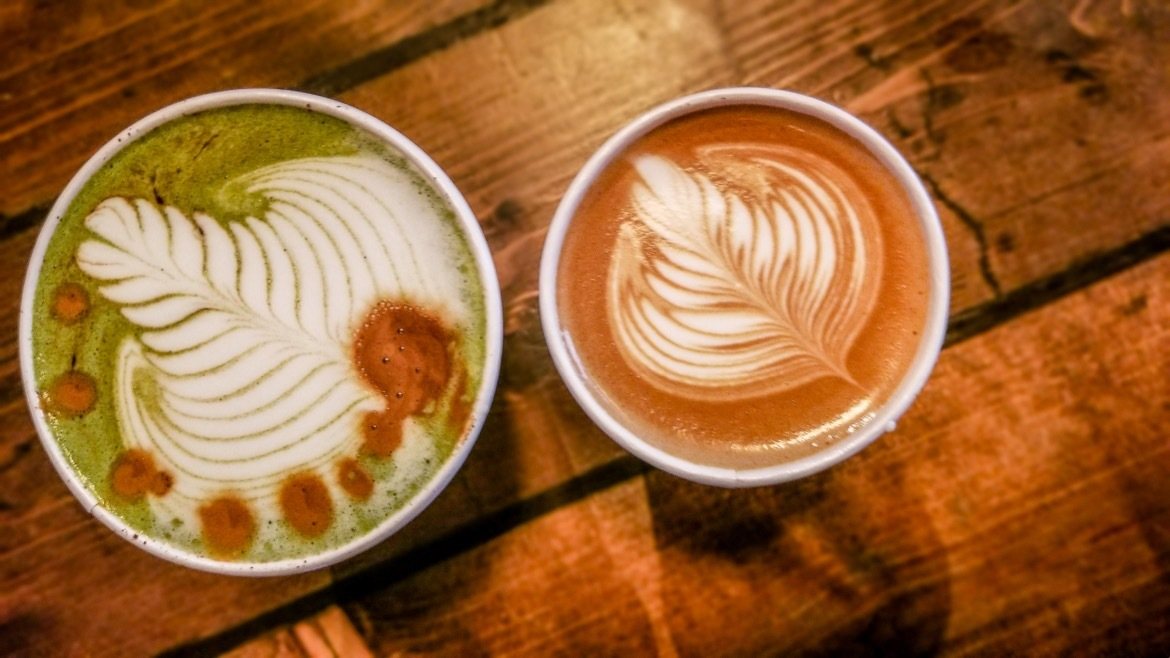 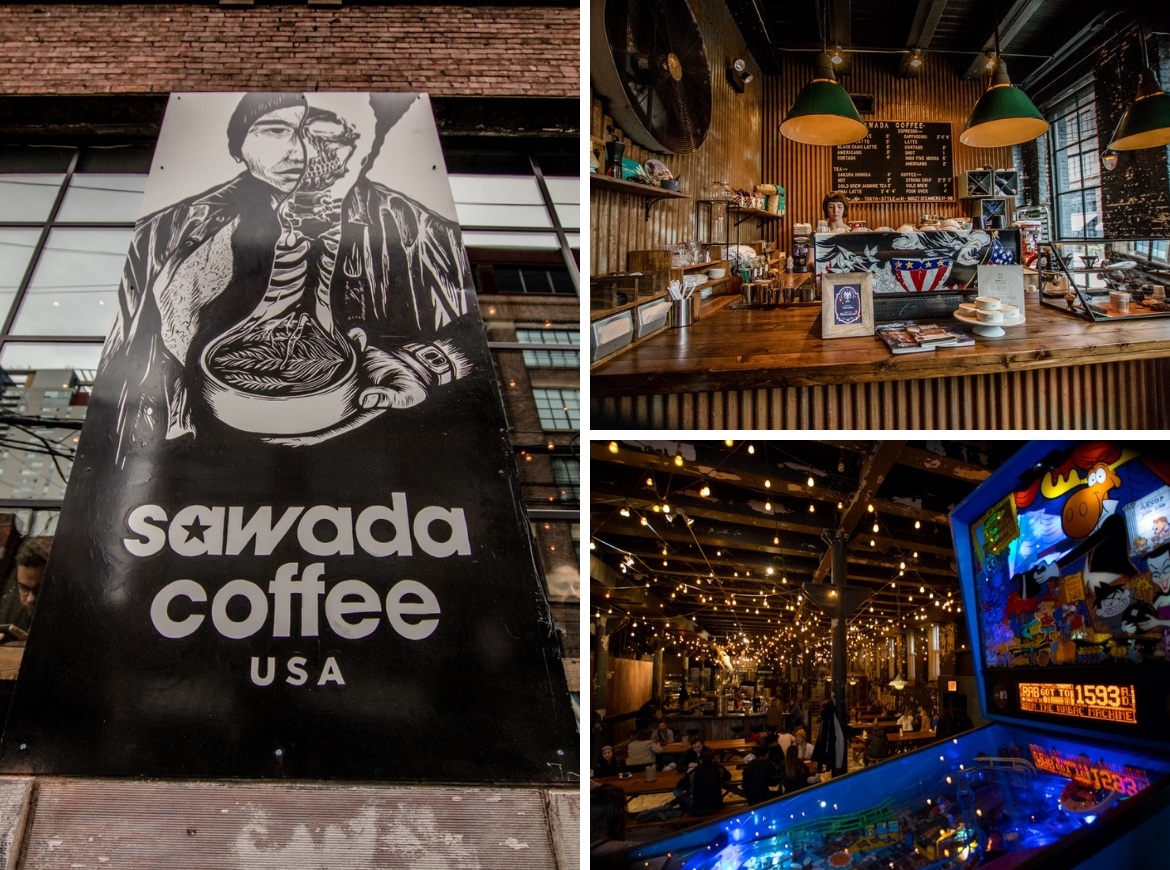 With coffee in hand, do some window shopping around the West Loop, a former industrial area that’s now one of Chicago’s most happening spots thanks to its fab restaurants along Randolph Street and Fulton Market, chic boutiques and bars. Then, hop in an Uber and head back downtown to explore more of the city from the water.

An architecture boat tour is one of the top things to do in Chicago, as it’s a great way to get a feel for the layout of the city while guides detail its storied history. There’s quite a range of excursions available depending on which company you book through, with some offering lunch and dinner cruises, or even more of a party atmosphere complete with an on-board bar.

If you’re tight on time and want to see as much of the city as possible, book with Seadog Cruises which has a 75-minute tour in a speedboat that cruises through the locks, up the Chicago River, and back along the lakefront. Click here to book 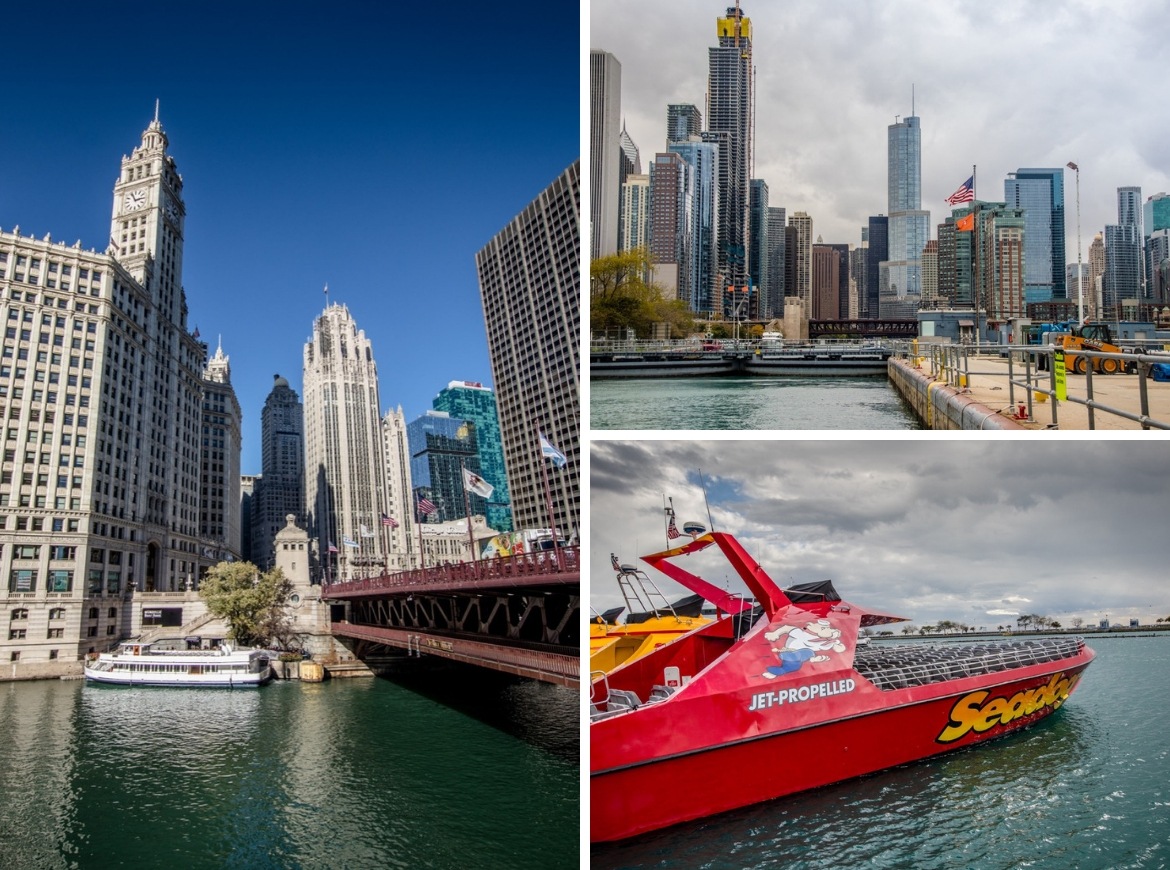 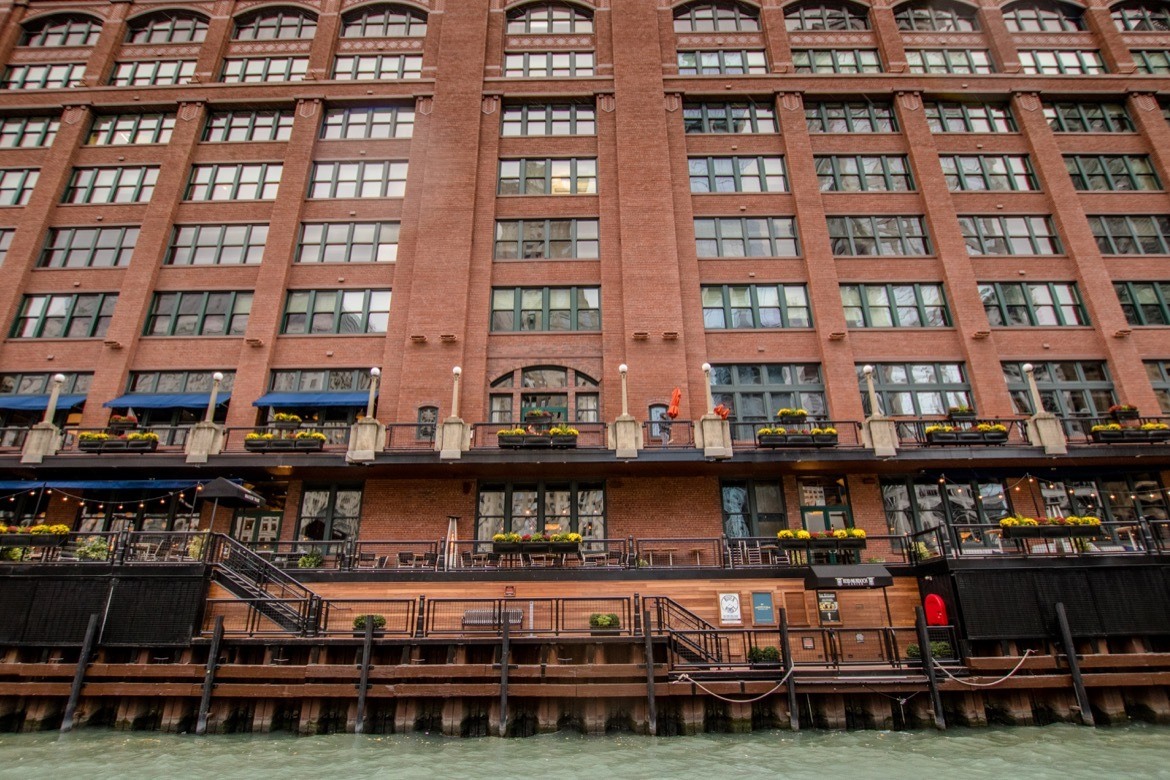 Most operators launch from Navy Pier, and it’s worth a quick walk around to grab shots of the gigantic ferris wheel and skyscrapers framed by Lake Michigan. Then, rent a bike and set off along the 18-mile Lakefront Trail, passing Grant Park and the Clarence Buckingham Memorial Fountain which is one of the world’s largest water features.

Modelled after a similar fountain in France’s Versailles, it’s adorned with four pairs of seahorses meant to symbolize the four states surrounding Lake Michigan, and has a jet that shoots water an incredible 150 feet high into the air. The 20-minute water display happens at the top of the hour from May through October, and the ones after dusk include a fantastic light and music show. 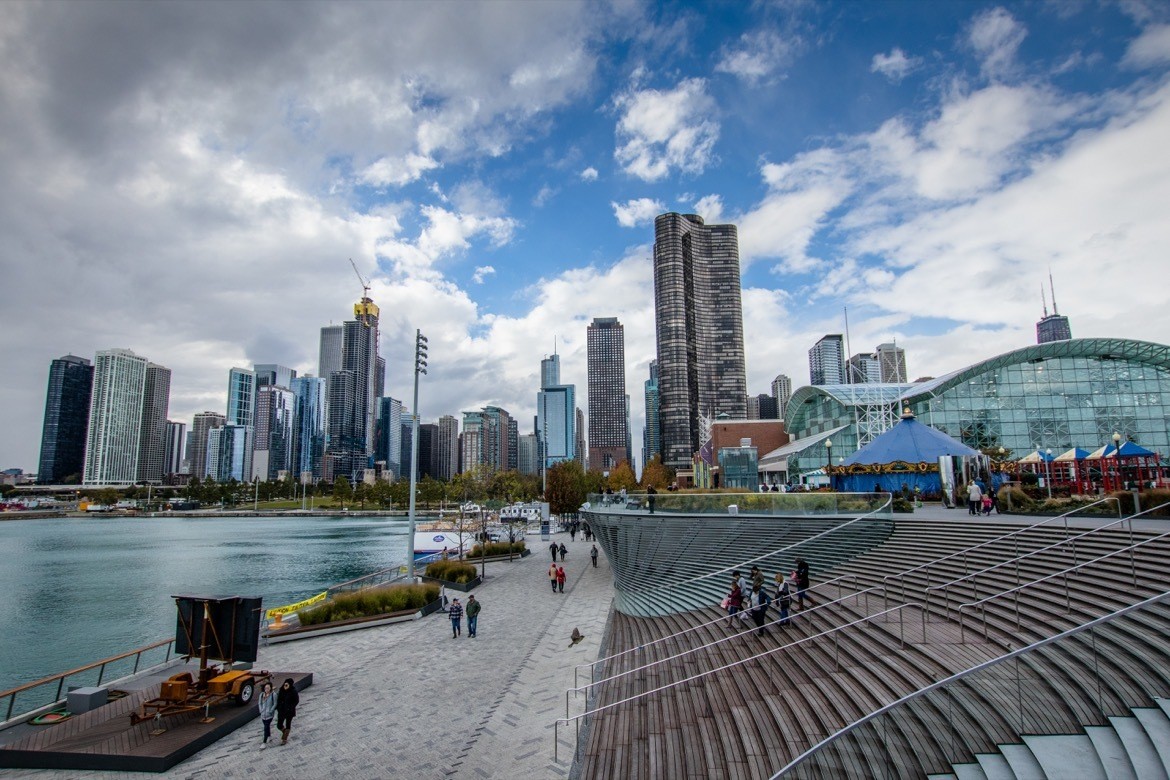 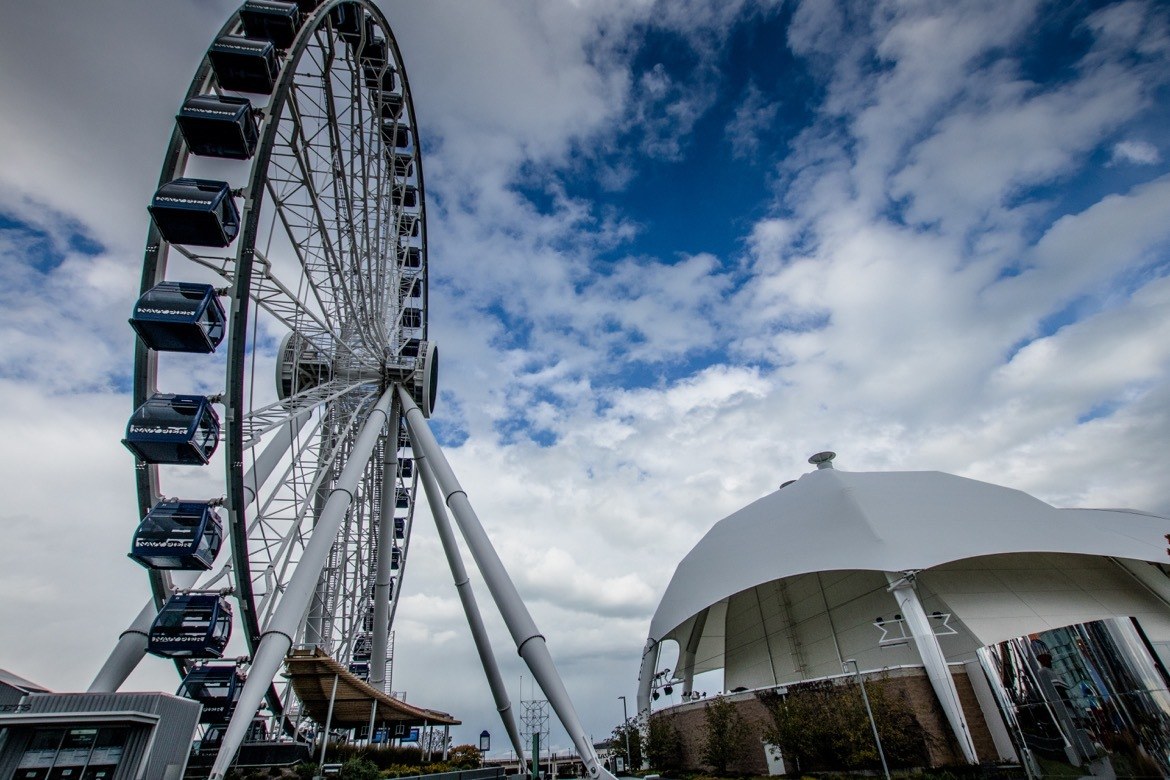 Finish your ride at the waterfront behind the Alder Planetarium, for your very last photography stop. With dreamy views of the skyline framed by the glittering lake, it’s considered one of the best spots in the city to watch the sunset and makes for the perfect ending to a whirlwind Chicago getaway.

Globe Guide explored Chicago as a guest of the Dana Hotel and Spa and Seadog Cruises. As always, hosts have no editorial influence on articles. 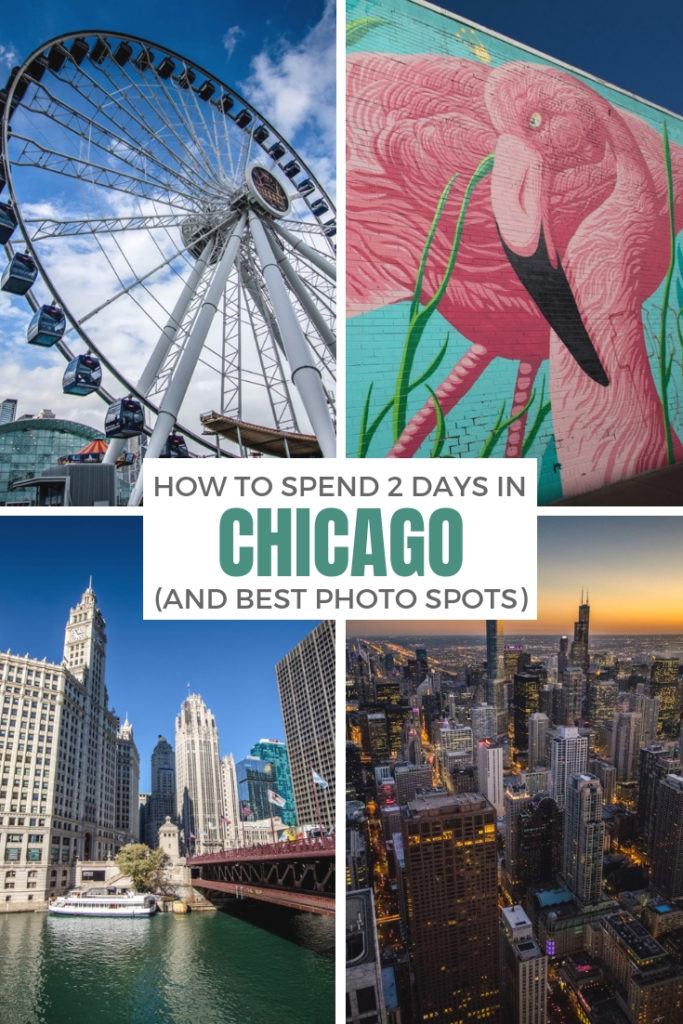 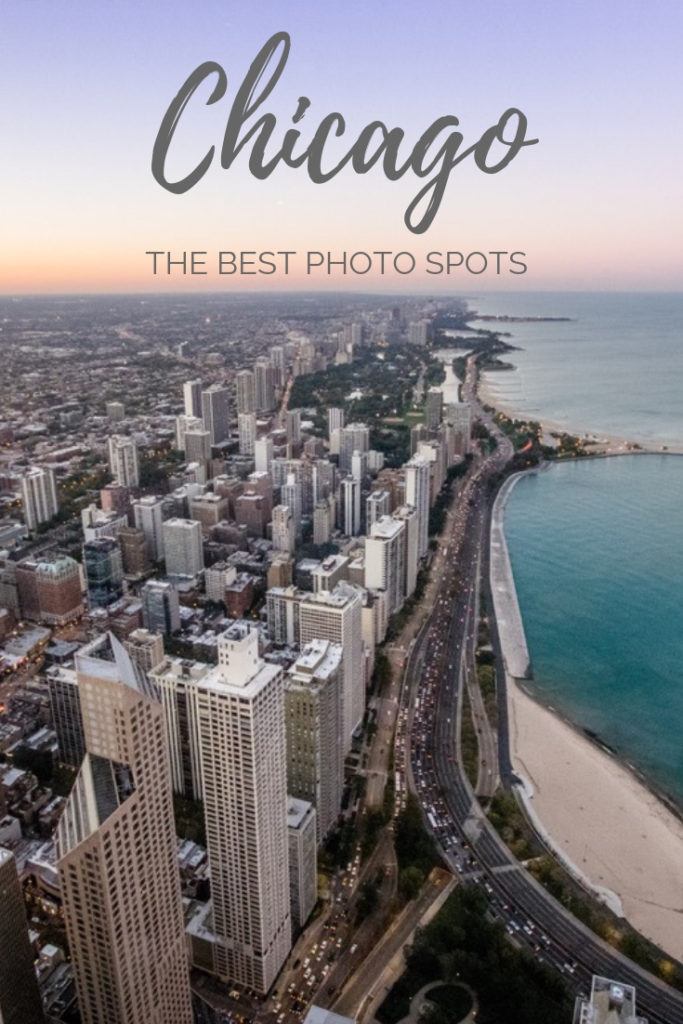 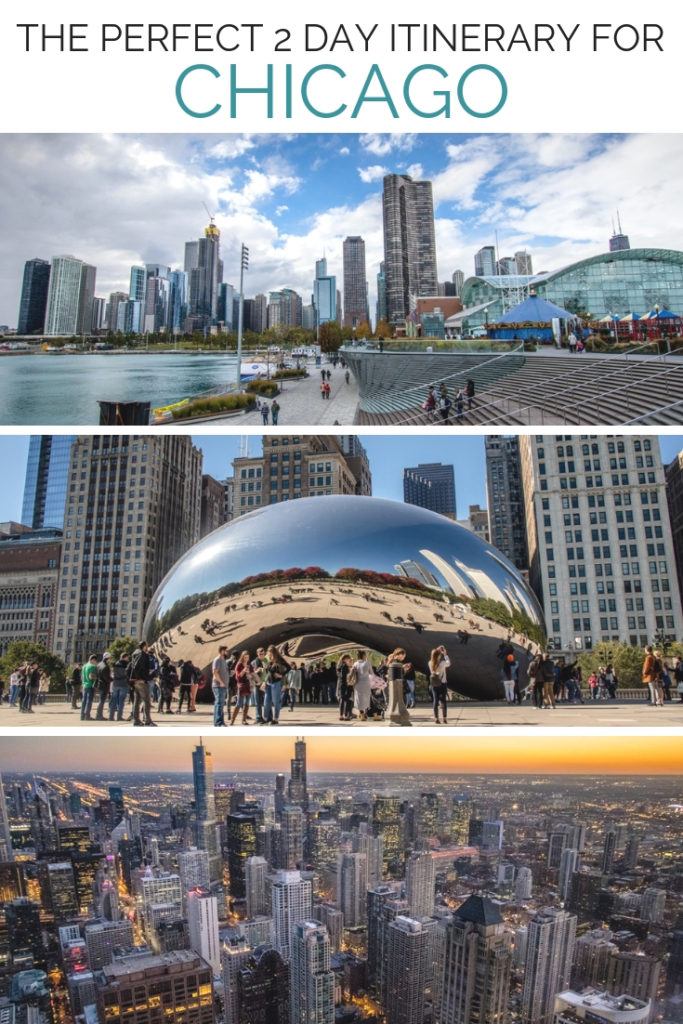