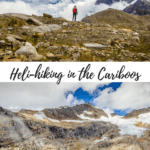 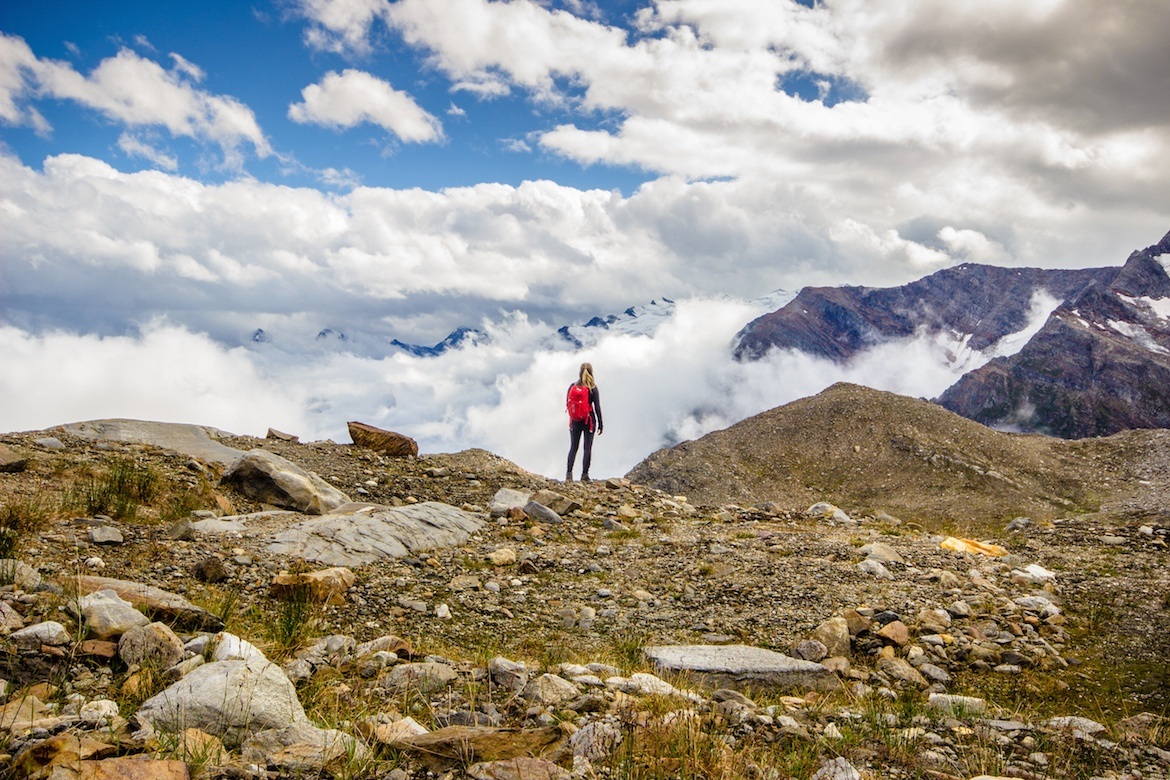 It felt like we were standing on top of the world.

A blanket of pillowy-soft clouds slowly enveloped the craggy rocks at our feet, the horizon marked by jagged peaks pushing their way through the fog. A piercing blue sky served as the backdrop, remarkable considering that just moments earlier it had been swathed in a cover that threatened to sock in the entire valley. Undeterred by Mother Nature’s indecisiveness our group had pressed on, the helicopter pilot Jens expertly maneuvering us through a clear pocket in the mist to drop us in the middle of a wildflower-filled alpine meadow.

As the chopper whirred away to go pick up another group, we were left to stare in awe and wonder at the scene before us. Crystal clear ponds cast a perfect reflection of the towering glaciers surrounding us, marked by turquoise sheets of wind-chiseled ice. Thundering waterfalls burst out of the granite rock faces, pouring into the valley. At our feet, loose stones glittered as they caught the sunlight, and tiny groups of vibrant green shrubs dotted the otherwise naked ridge.

This was the Cariboos, and it was beyond our wildest expectations.

WATCH: Heli-hiking in the Cariboos 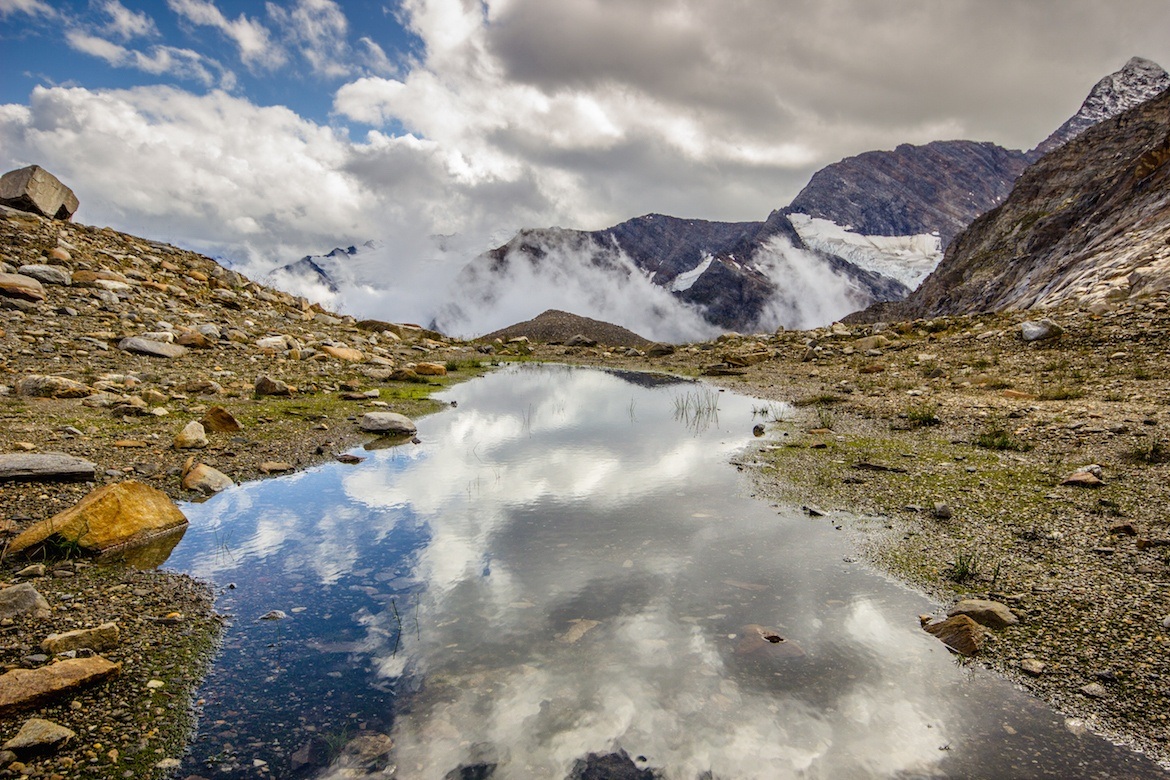 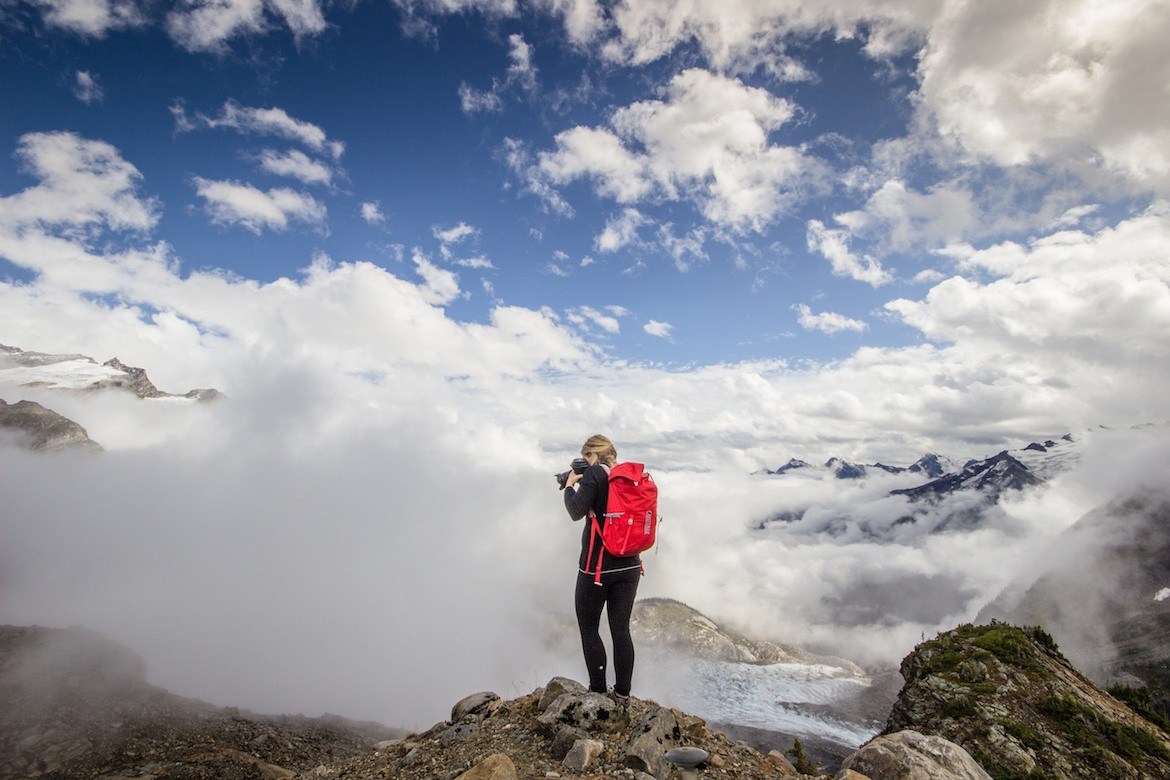 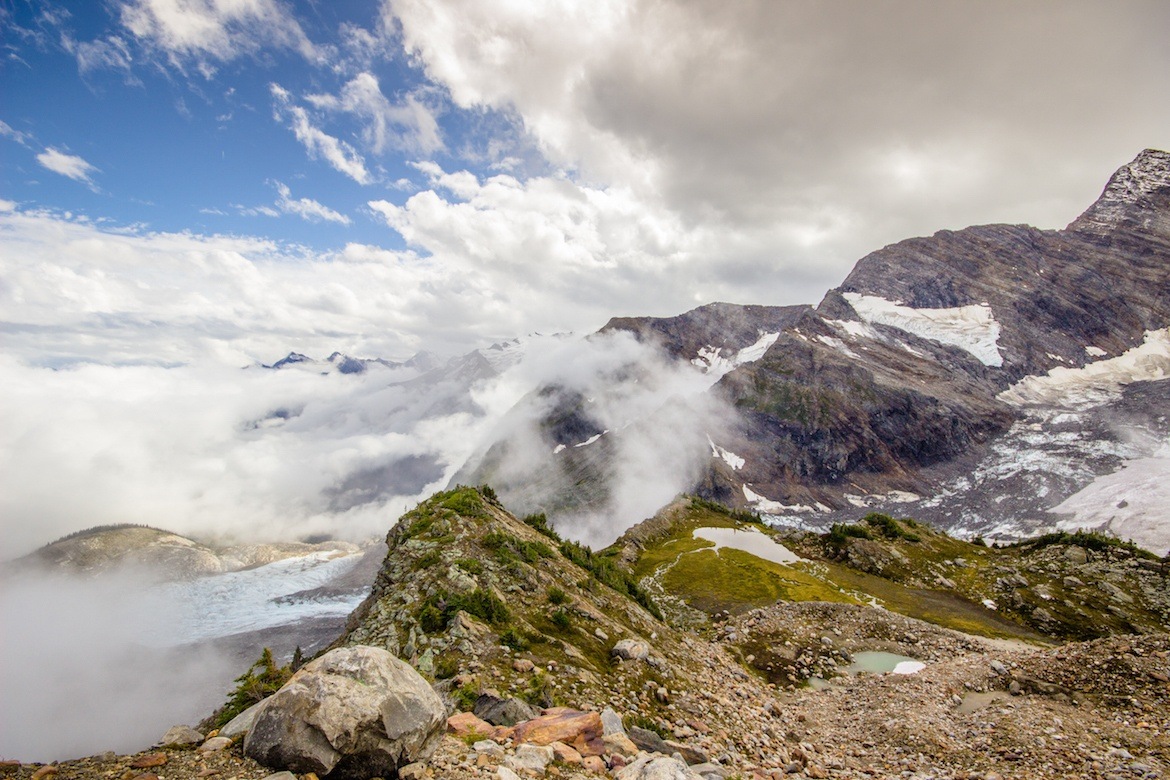 The journey had started a day earlier, with our group of 40-some people setting off from Calgary at dawn to drive to the tiny town of Valemount, British Columbia where Canadian Mountain Holidays’ helipad is located. Our convoy made its way along the stunningly-scenic Icefields Parkway which winds through Alberta’s mountain parks, making time for special moments like watching the rose-hued sunrise over Banff’s Vermillion Lakes, and soaking in the stillness of the crisp morning air as fog clung to Herbert Lake’s ink-black surface. 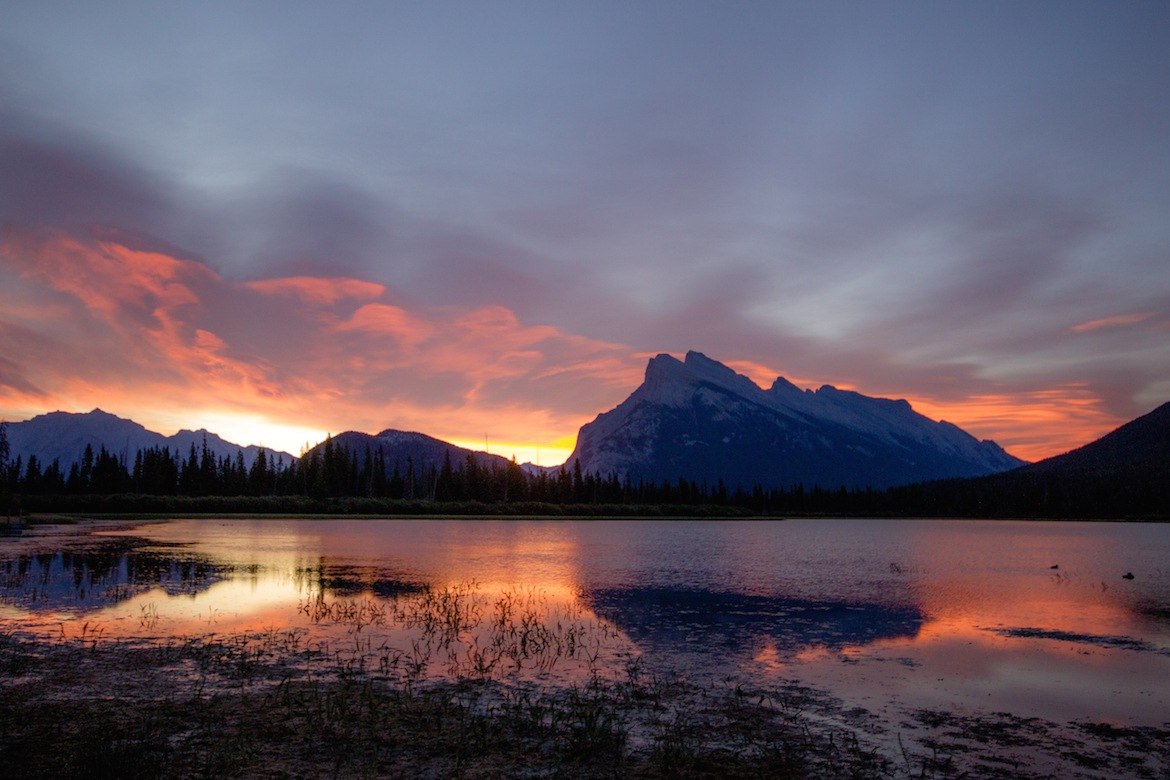 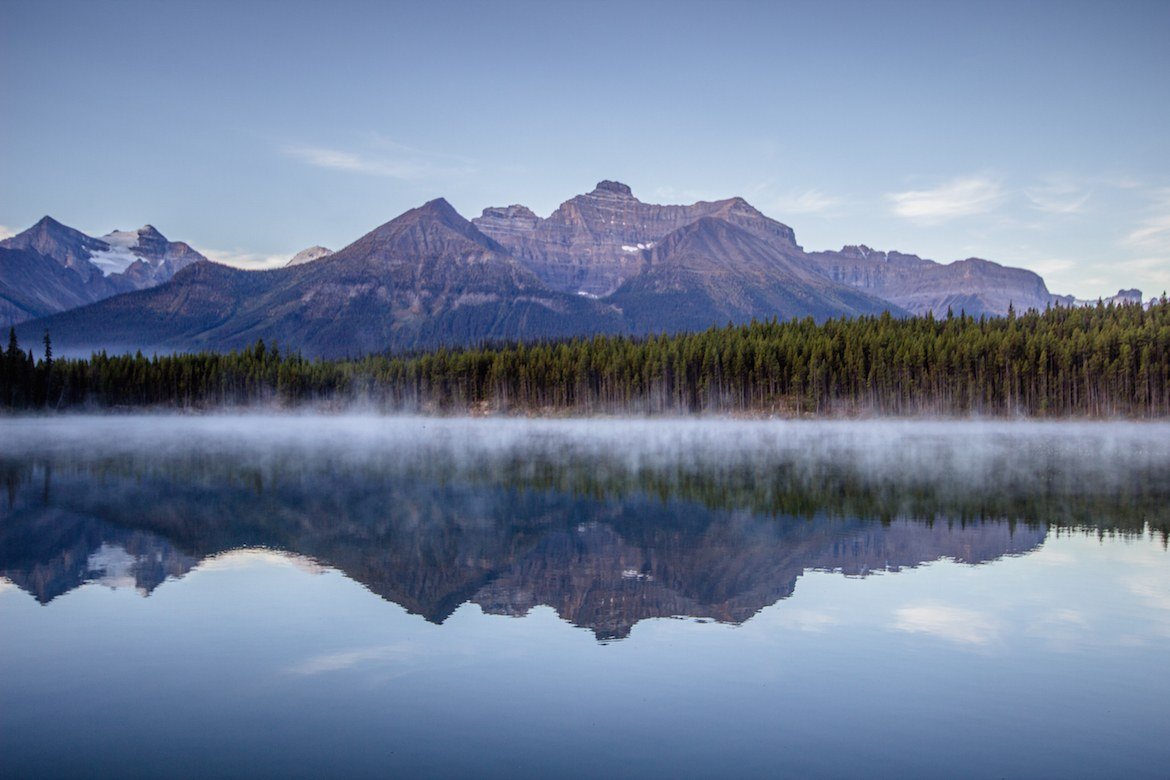 When we finally arrived at the helipad about 90 minutes west of Jasper National Park, Jens wasted no time delivering a safety briefing about the helicopter that would serve as our only mode of transportation over the next few days, before we piled into the bird to be whisked into the backcountry. There was extra cause for celebration on this day: we were going to be the first summer group the remote lodge had seen in a decade, despite being the birthplace of heli-hiking thanks to CHM’s storied founder Hans Gmoser. 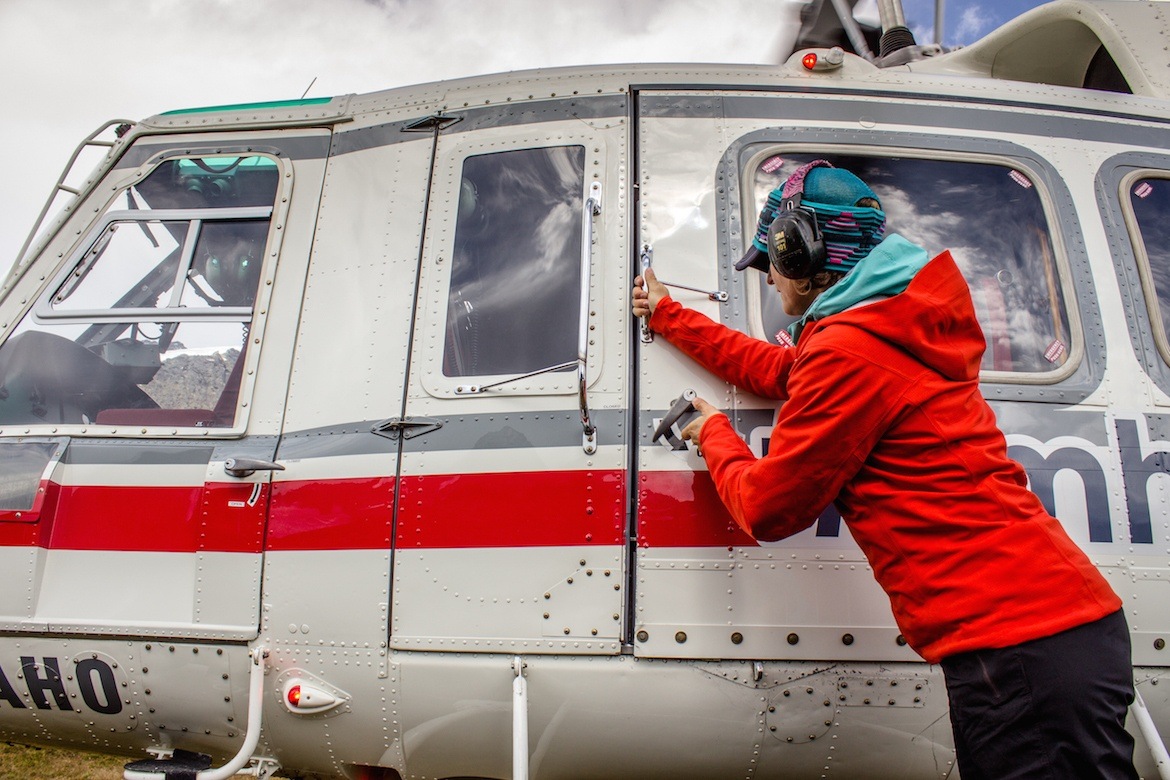 Though impossible to outshine its untouched surroundings, the lodge located in the Columbia Mountains is a big part of what draws guests to the CMH experience. The cozy, wood-frame structure is the kind of place that feels like home the second you step through the front door, with friendly staff (who inexplicably seem to memorize everyone’s name within the first hour) encouraging us to kick off our shoes, grab a drink and gather around the fireplace. 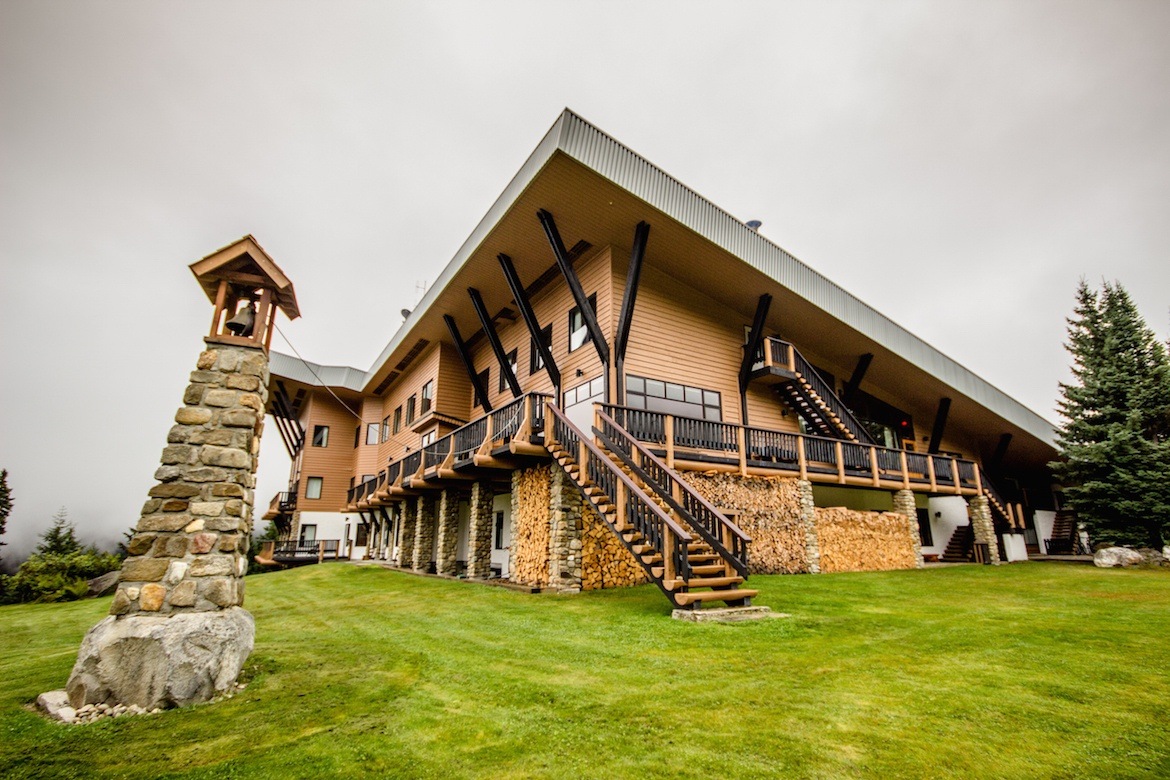 Hearty meals were served family-style on oversize farm tables, while downtime meant massages, spirited conversations at the bar, or songs around the campfire accompanied by a duo of acoustic guitars, cold beer and good company. For some, the end of the day brought late-night soaks in the hot tub under a star-filled sky, before retiring to the cozy comforters in our rooms (named after famous peaks such as the Matterhorn), resting up ahead another day of adventure. Lodge life makes it easy to slip away from real life, in the best possible way. 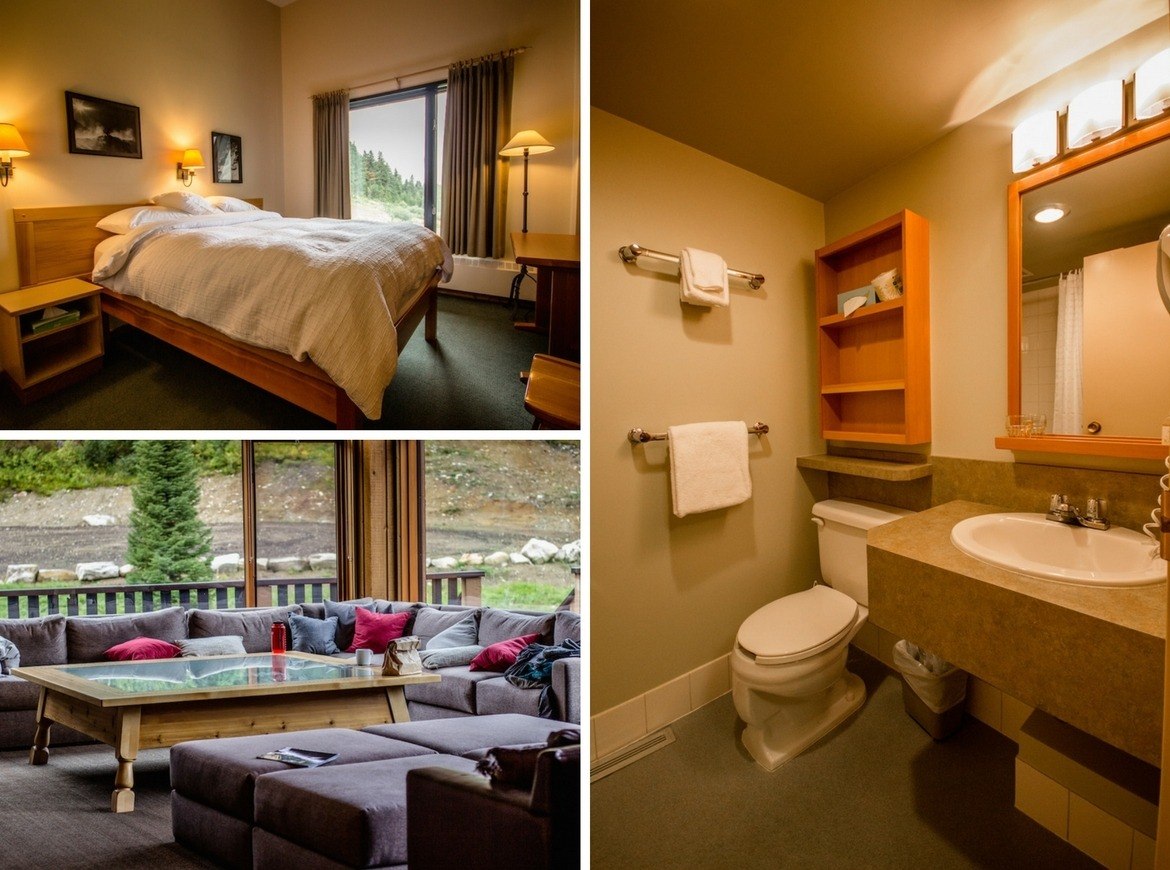 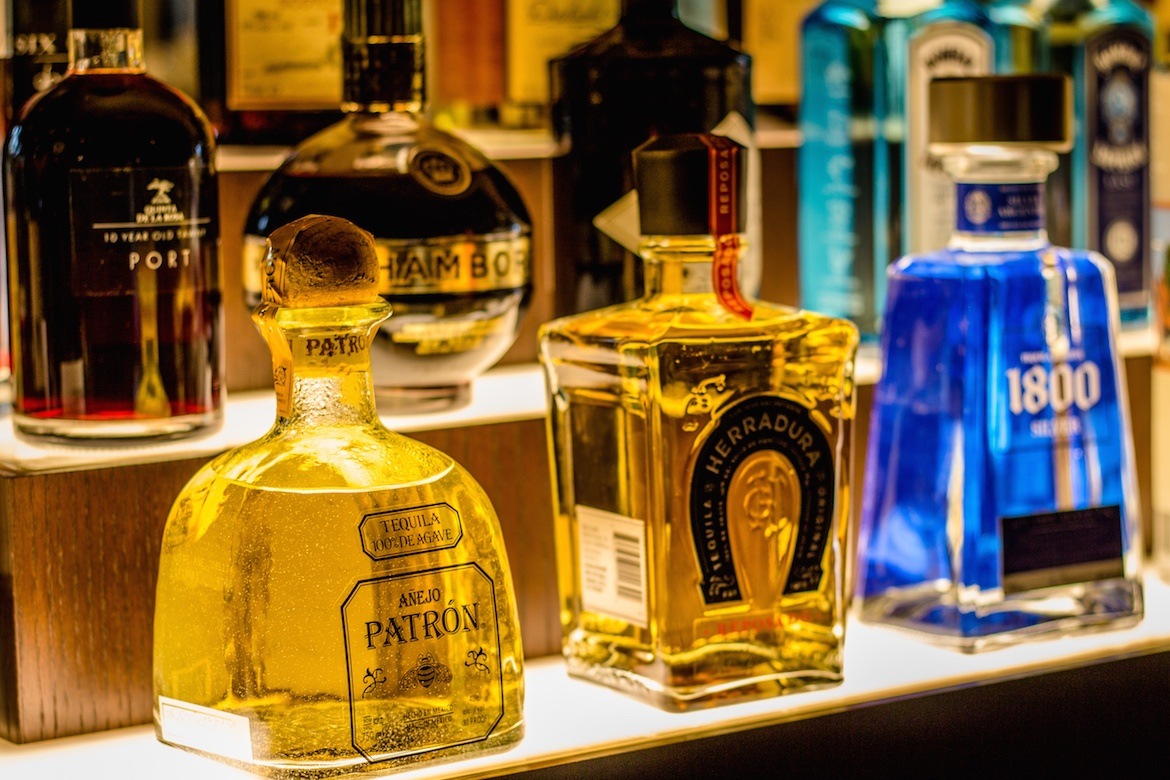 We were set for two full days of exploration, with this part of the Cariboos being so remote they can only reasonably be accessed by helicopter and there are no trails to speak of. Despite clouds socking us in both mornings, the blue-skies prevailed and our expert guides made up for lost time by facilitating numerous drops throughout the range. We soared over winding aqua-marine rivers and wind-swept meadows, and marvelled at the Penny, Canoe and Crazy Horse glaciers as we navigated over loose rocks that made up the psuedo-pathways. 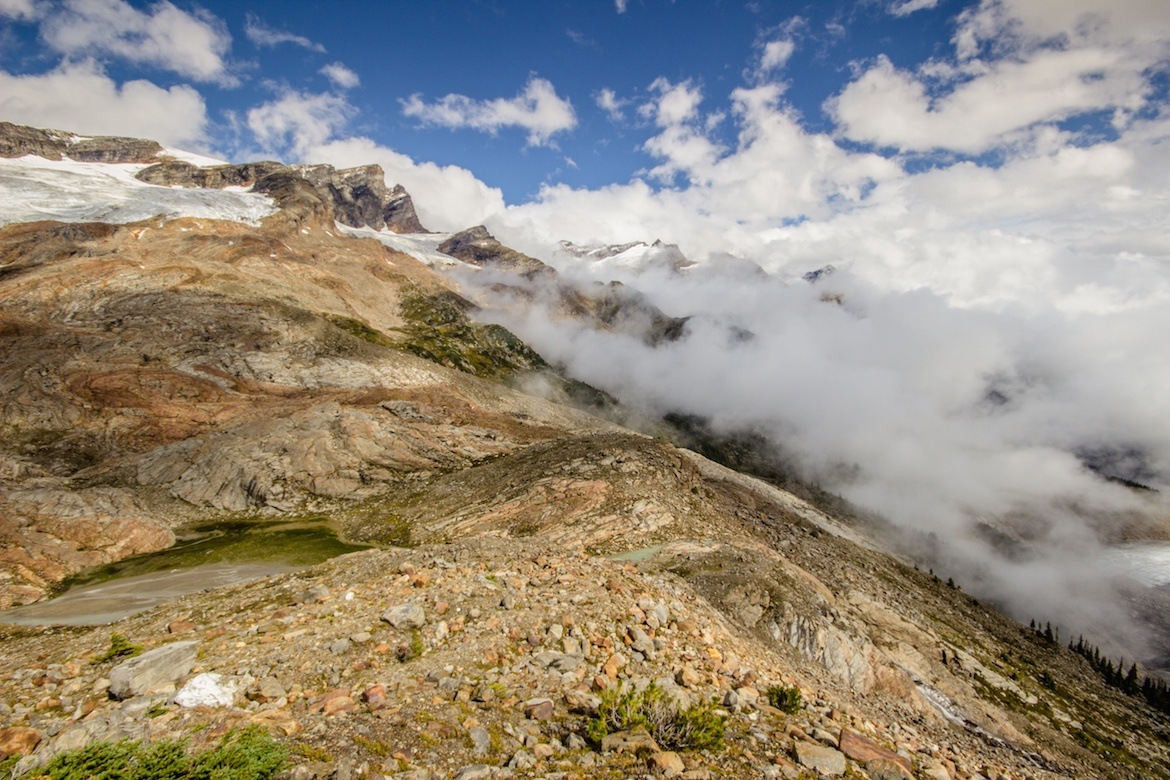 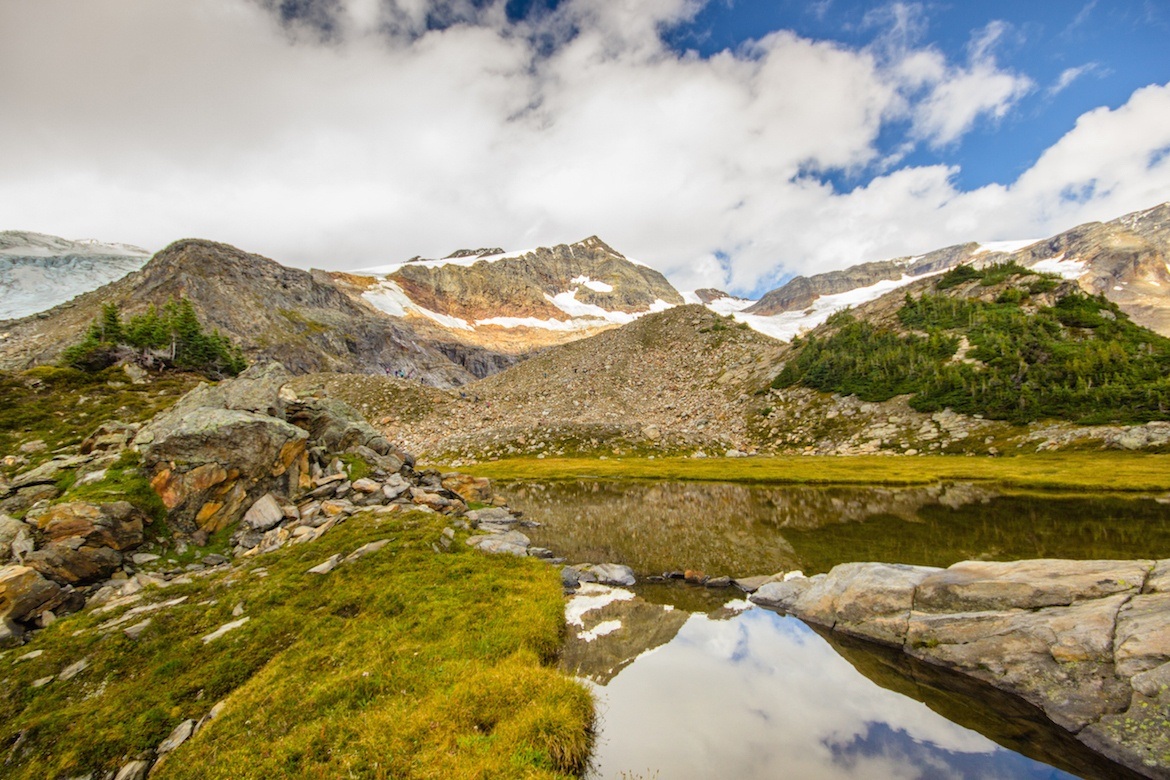 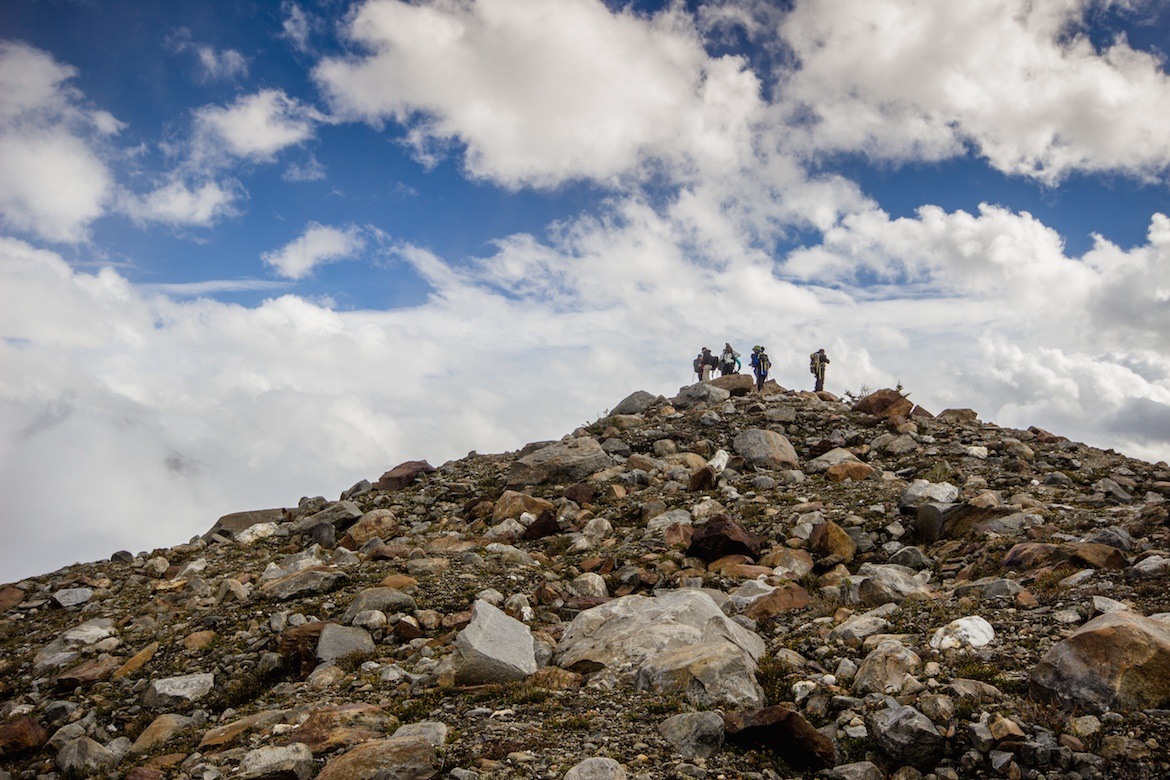 Our persistence paid off on day two when we were dropped off on an impossibly tiny ridge at the base of the Zilmer Glacier, and looked up to find sandstone and rust-hued mountains where steep crevasses revealed hidden pools. We excitedly picked our way across the rock face—aided at one point by a rope—feeling like we were on an expedition as we made our way through the area that’s never seen much in the way of human footprints. The true reward came after cresting the final ridge along the so-called Adventure Trail, the panoramic vista revealing a meadow surrounded by more waterfalls then one could possibly count. 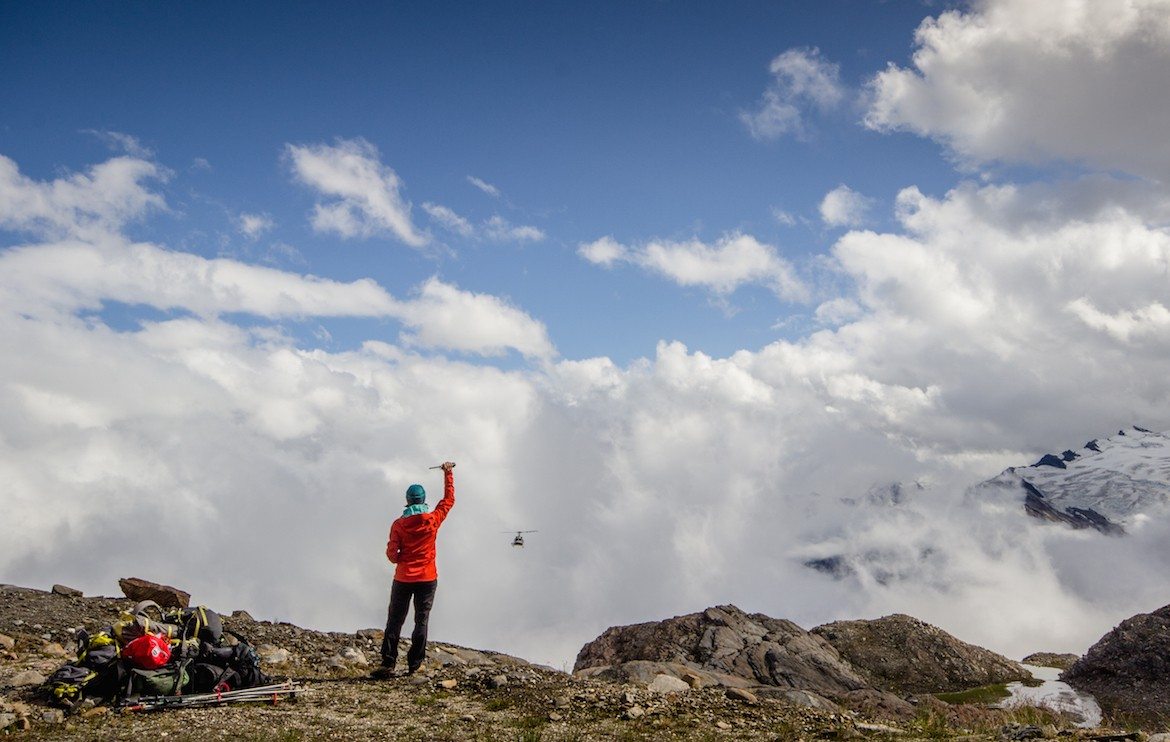 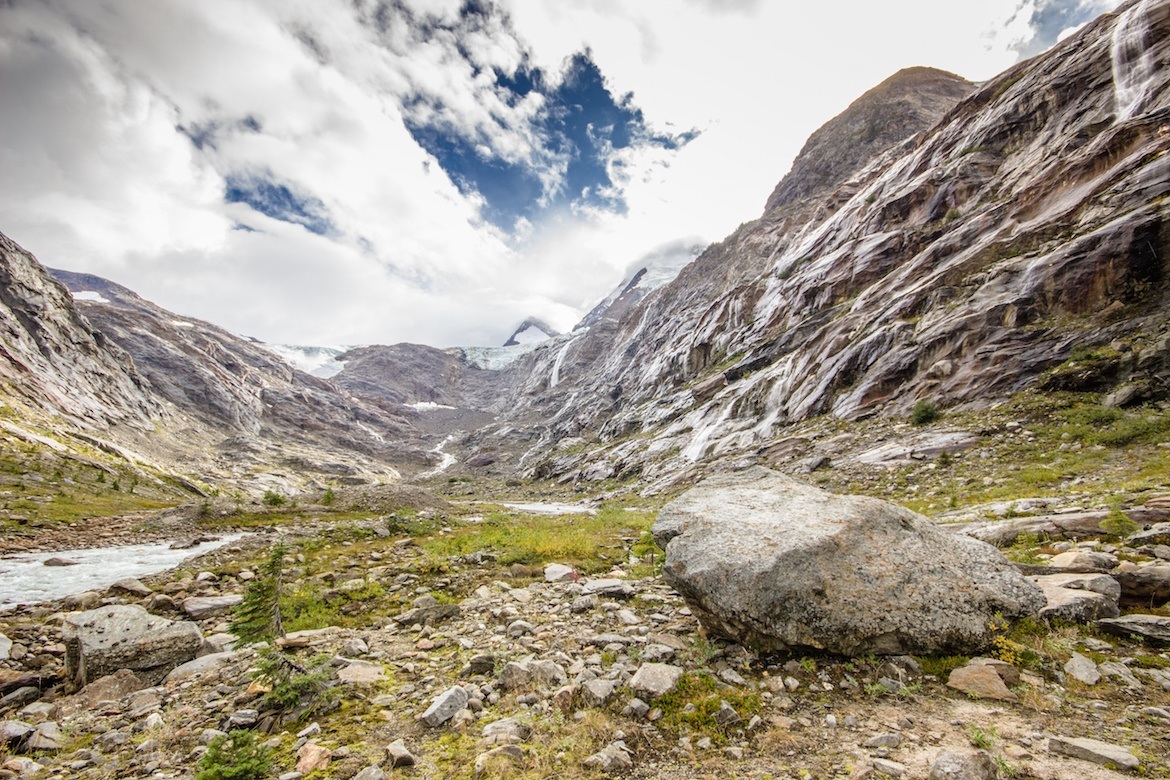 Incredibly, the best was still to come. For our final summit, Jens shuttled us back over the lodge toward Valemount, dropping two groups of us on a mountain top that granted 360-degree views of the entire valley below. From above the tree line we could truly appreciate the beauty of the Cariboos, enjoying a brisk ridge walk as the late-afternoon light softly lit the surrounding peaks, creating an ethereal scene. A quick scramble to the peak served as the finale, our efforts rewarded with an unforgettable up-close look of jagged rocks that looked like some prehistoric masterpiece. 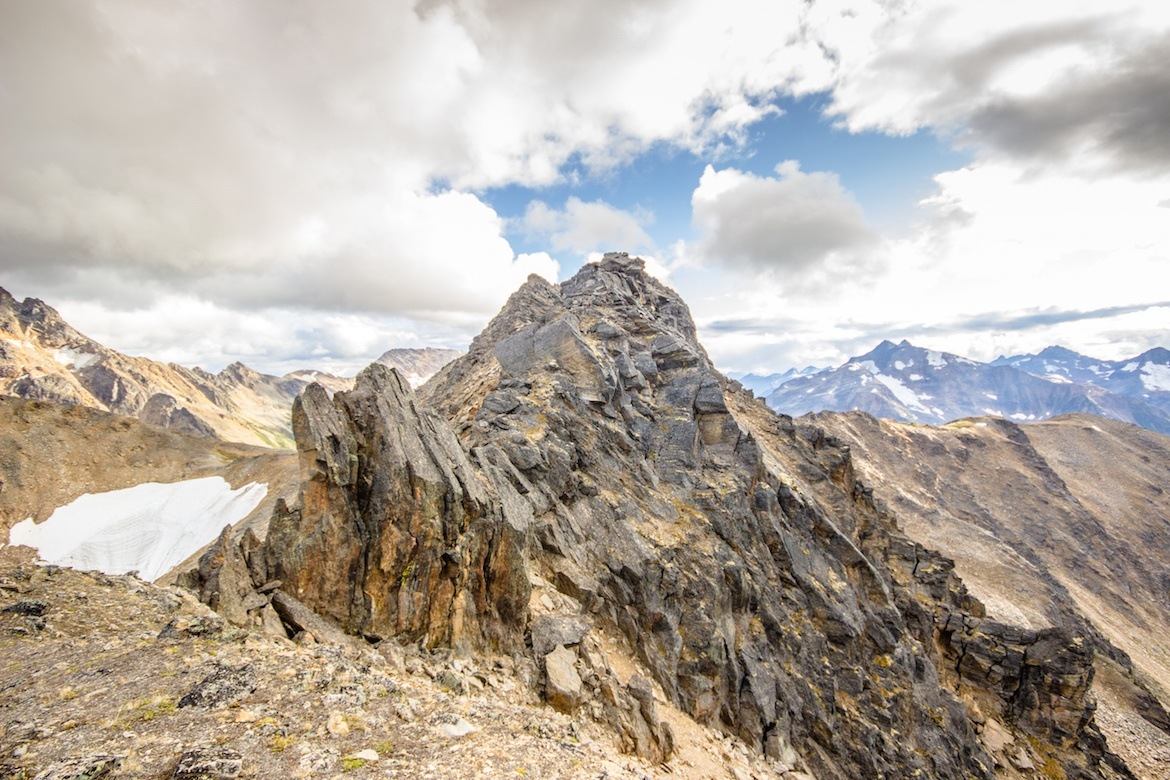 We let out a celebratory cheer accompanied by high-fives, then quietly settled down onto the exposed hillside. Cognizant of our last few moments on top of the world in the Cariboos, we were determined to soak up every last second of our epic heli-hiking adventure. 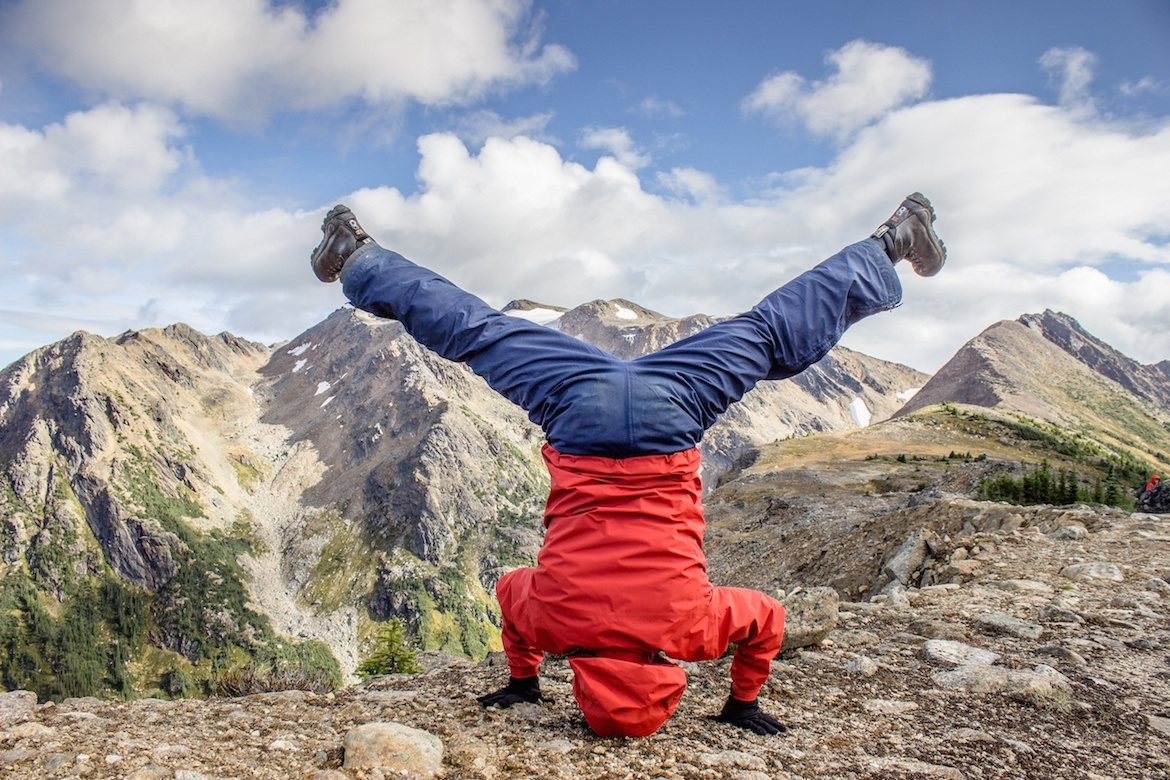 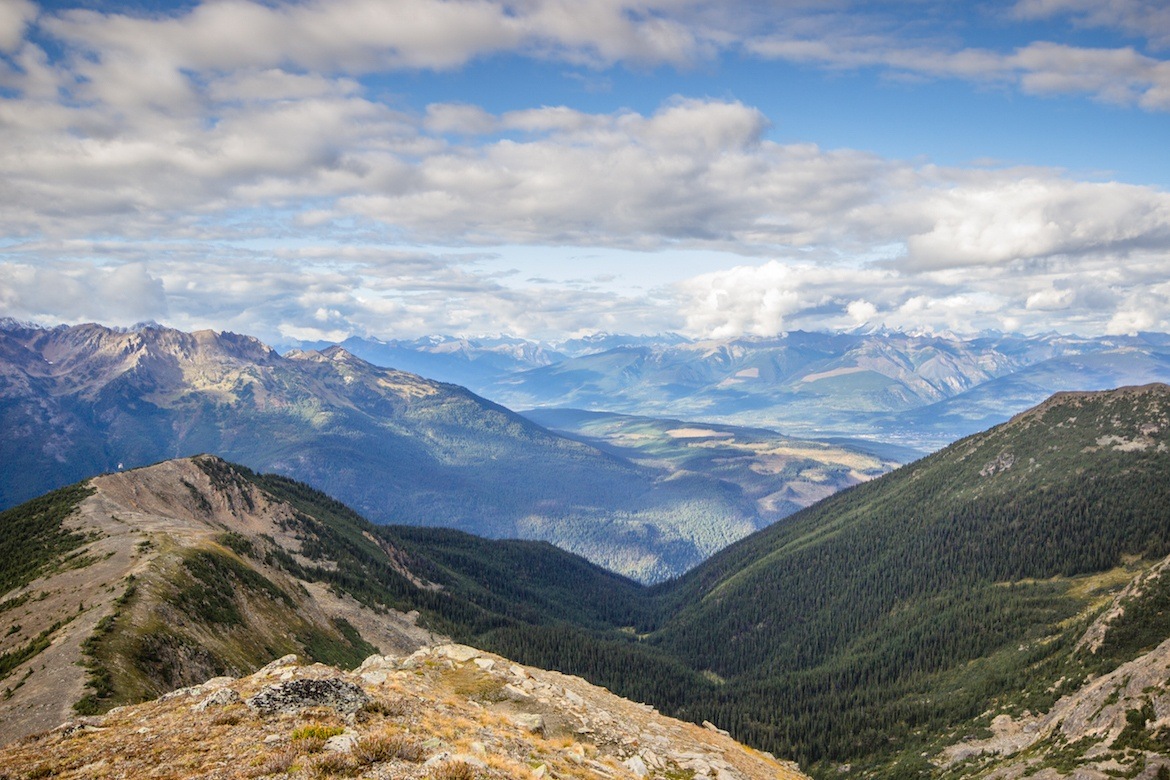 Globe Guide explored the Cariboos as a guest of Canadian Mountain Holidays. As always, hosts have no editorial influence on articles. 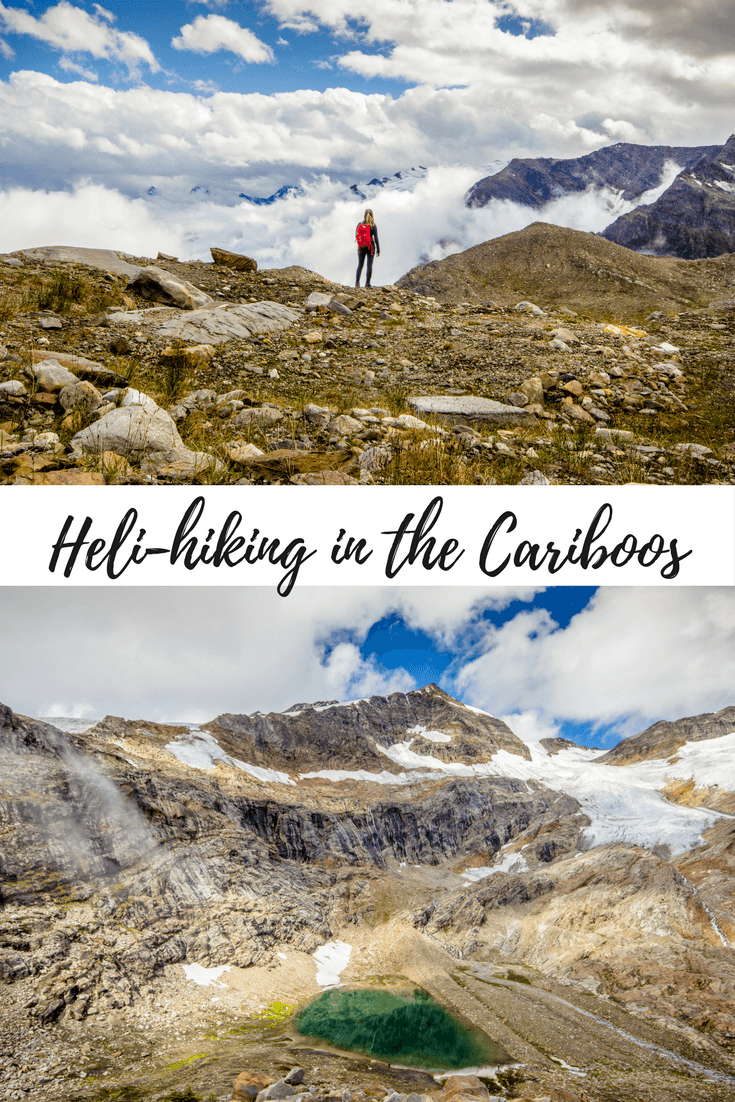