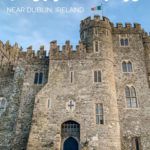 Move over Meghan Markle: it turns out you don’t have to marry into the royal family to live out the ultimate fantasy of sleeping in a castle–instead, it’s as simple as heading to Dublin, Ireland. 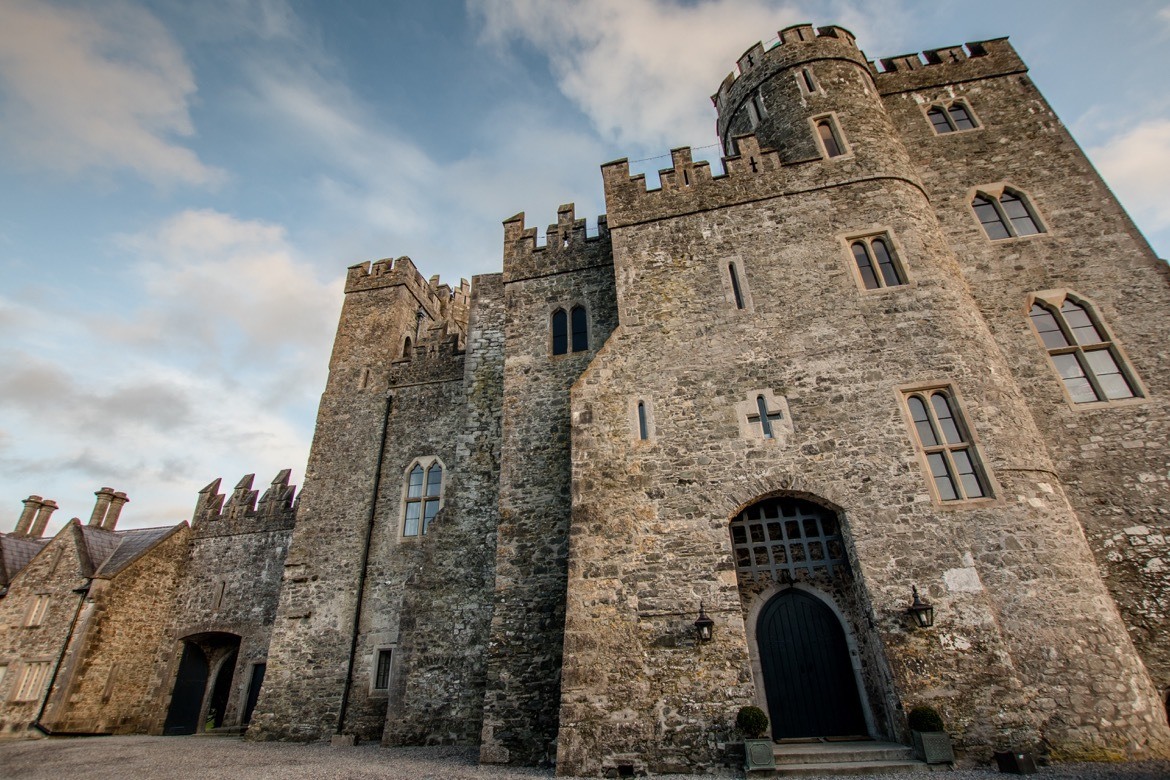 There a couple of impressive Celtic castles right in the city as well as a few more just outside of town in the Irish countryside, making it easy to channel your inner Kate Middleton for a night or two (but probably without the great hair, because WHAT IS HER SECRET?!).

Here are some of the best royal rooms in castles near Dublin, which are well worth adding to your Ireland itinerary.

Ever stayed at a hotel where real suits of armour greet guests in the lobby? Yeah, didn’t think so.

That’s just one of the regal touches that makes a stay at the luxurious Clontarf Castle Hotel so memorable, along with the grand ivy-clad grand turrets and glowing lanterns that make it feel like you’re in a scene from The Princess Bride.

Perhaps even more remarkable is that this exceptional property is located in a peaceful neighbourhood just 10 minutes from the centre, making it one of the most popular castles in Dublin to stay in and the perfect base for exploring the city. 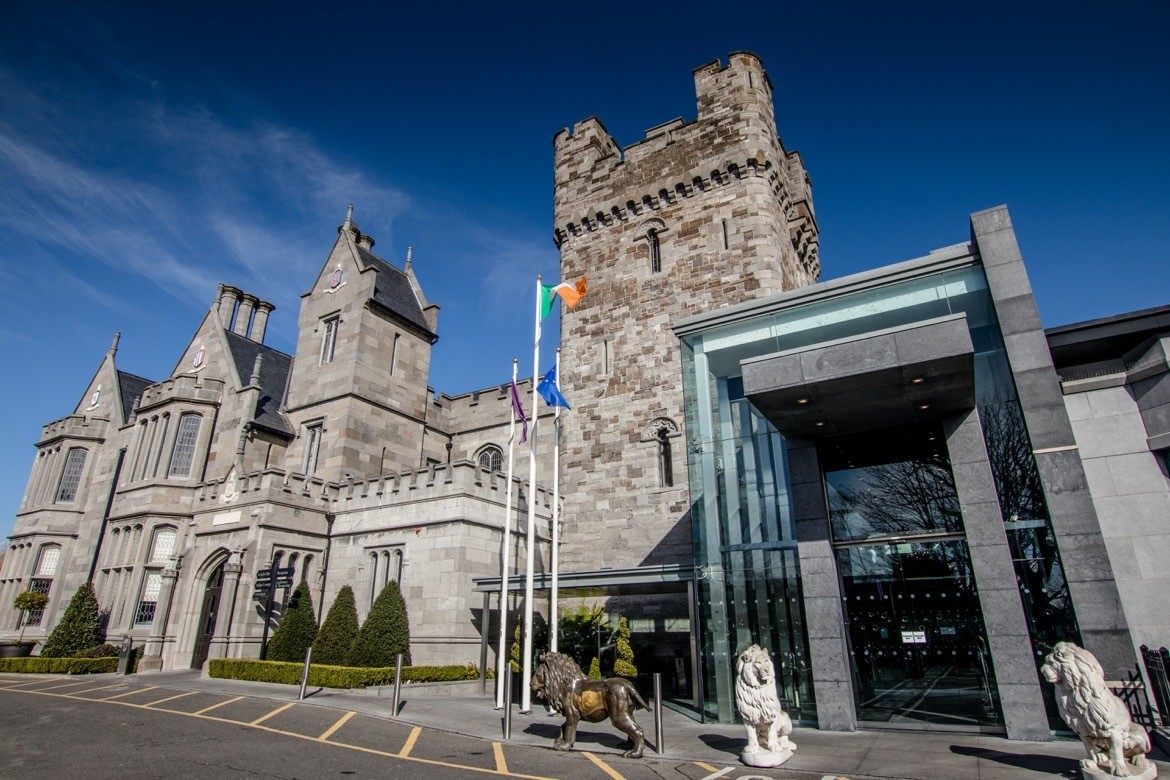 The Clontarf dates back to 1172, was a key location of the Battle of Clontarf, and has seen notable figures like the composer George Handel and Dracula author Abraham Stoker throughout the years.

When it was converted into a hotel, architects designed a beautiful expansion at the front entrance that perfectly blends old with new, where guests can relax in the modern lounge against a backdrop of the historic brick castle walls. 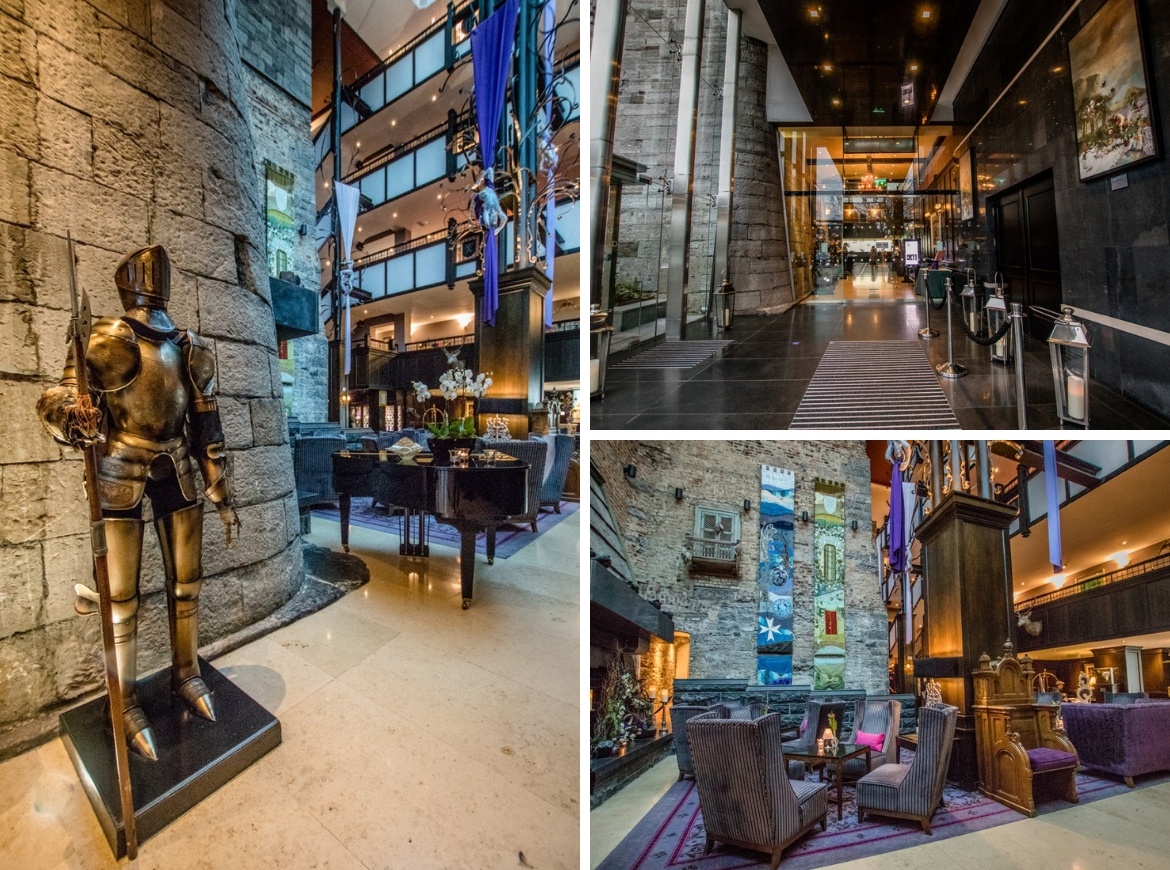 The front entrance of Clontarf Castle

Rooms and expansive suites have all been updated with modern amenities like flat-screen smart TVs and USB outlets, yet retain the charm of the castle with huge four poster canopy beds, dramatic vaulted ceilings, metallic accents and plush, jewel-toned bedding.

Some boast views of the Dublin Mountains while others look out over a sea of rooftops, giving guests a taste of what ‘living large’ feels like. 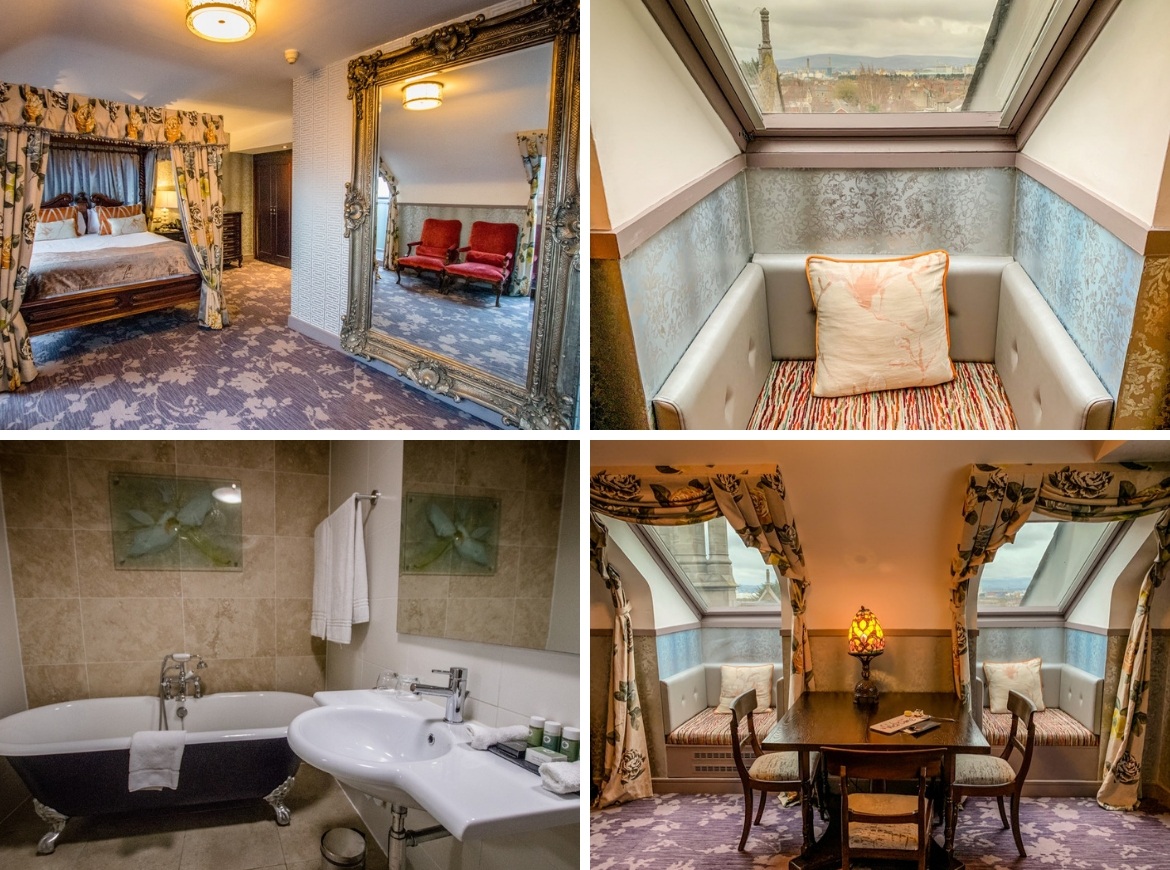 Dining at the Clontarf Castle Hotel is also an unforgettable affair, where stately rooms once used as family bedrooms have been transformed into the Fahrenheit Restaurant.

Another notable spot is the Knight’s Bar, which serves up traditional Irish cruise in a cozy space featuring stained glass windows, polished wooden floors and a roaring fireplace. When it comes to the best castle hotels in Ireland, the Clontarf is a standout spot. Click here to book 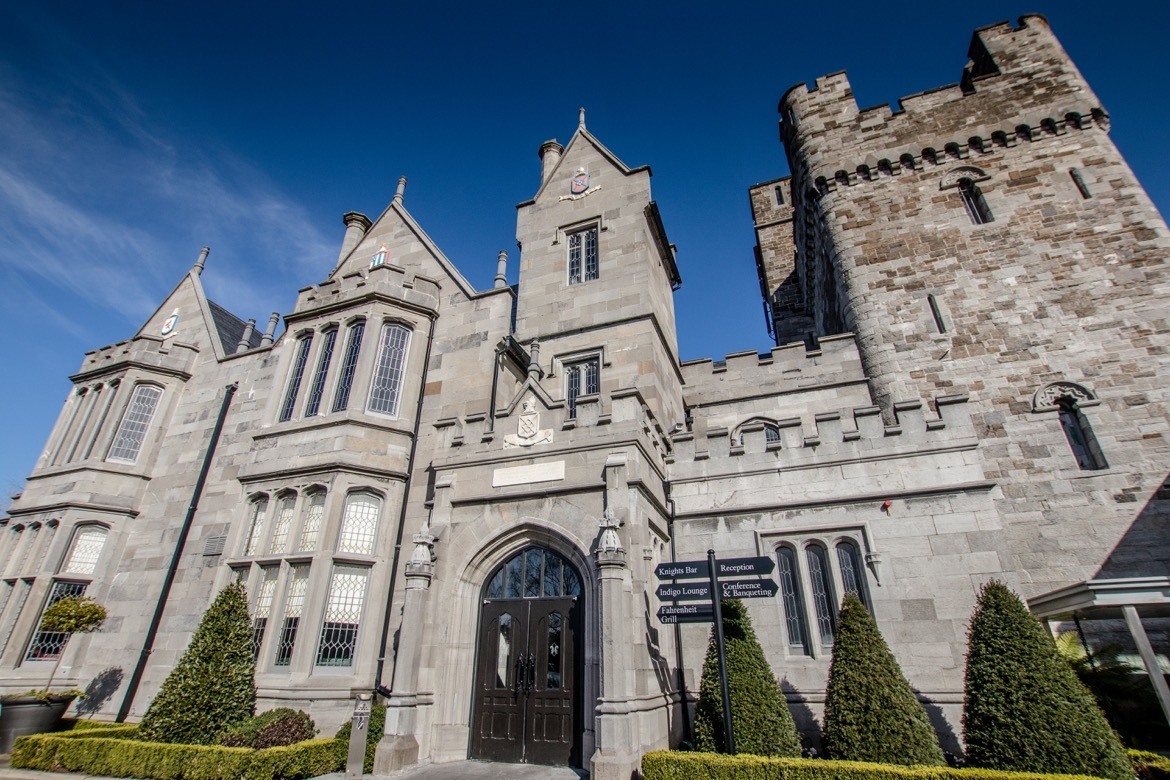 Nestled at the base of majestic Killiney Hill which has one of the best views in the entire city, the Fitzpatrick Castle Hotel is a welcome respite from the hustle and bustle of Dublin yet still a quick drive to the centre. 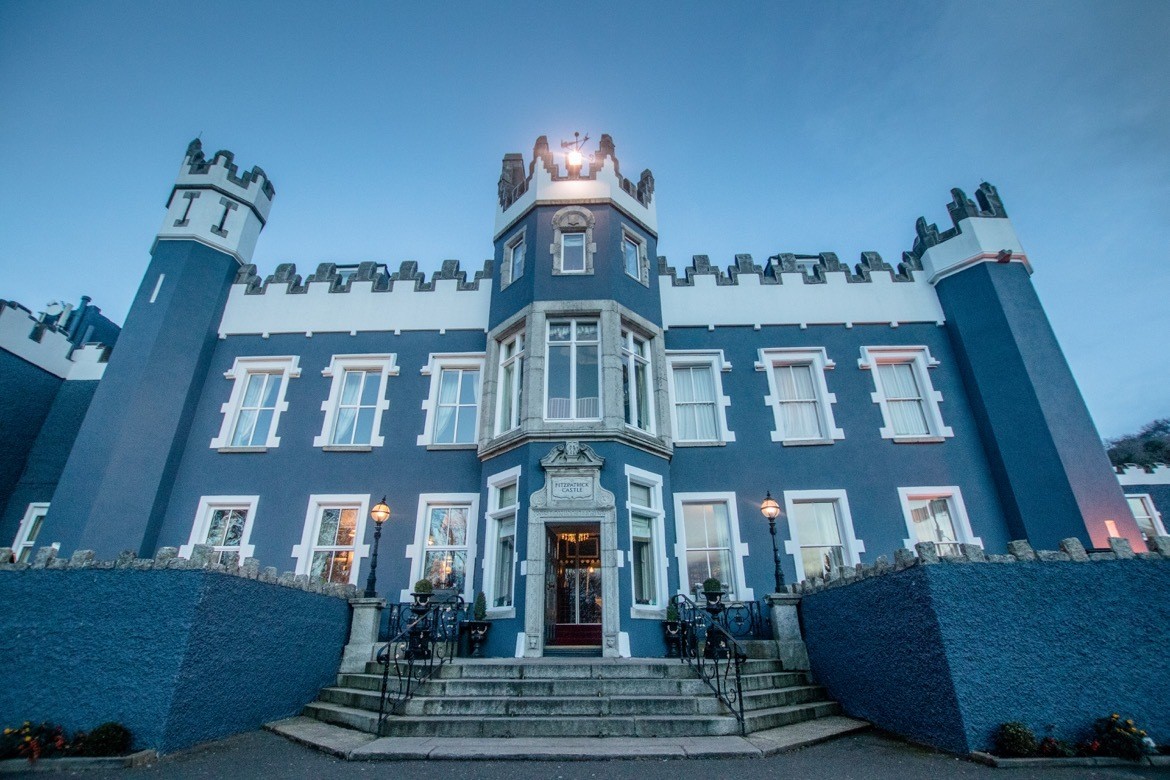 The elegant Library Cocktail Bar is the perfect spot to enjoy a pint of Guinness or tuck into their fabulous afternoon tea, and on-site amenities include a fitness centre, indoor pool, sauna and steam room. Best of all, room rates at this Dublin castle hotel won’t set you back a king’s ransom. Click here to book 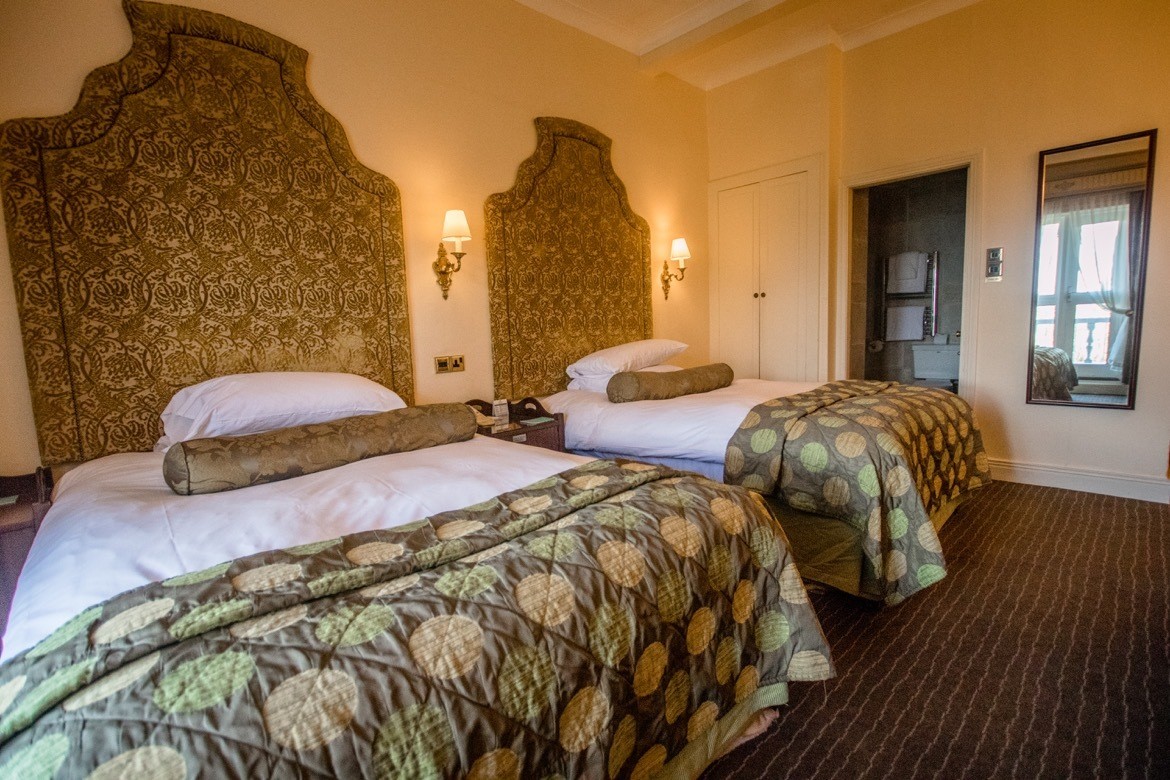 A room at the Fitzpatrick Castle 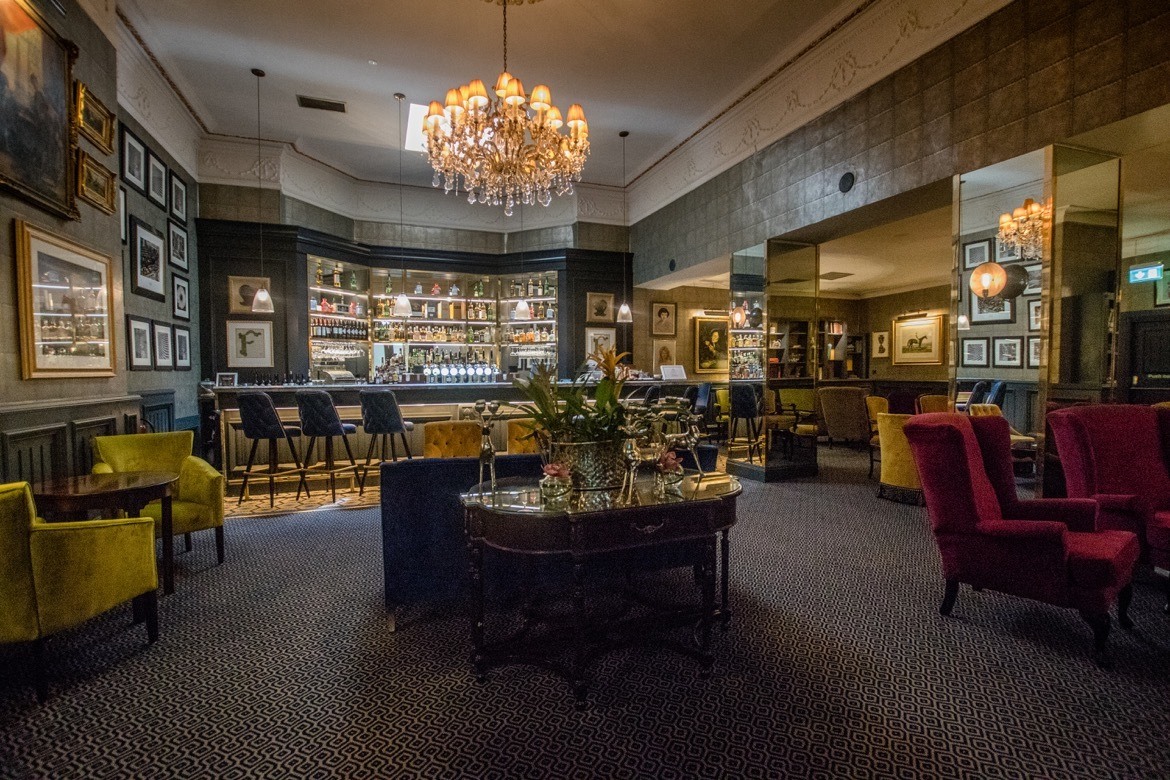 The original house was built in 1740, and as things tend to go around here it changed hands multiple times over the centuries and was built up as time went on. A fellow by the name of Robert Warren who owned the property in the mid-1800s is responsible for many of the improvements and building up the surrounding area; it was Warren who restored the obelisk that sits on the top of Killiney Hill today, and he also donated most of the land and money used to build the Killiney parish church.

In the 20th century, ‘Killiney Castle’ as it was then known was used by groups like the IRA and Republicans during the civil war, as well as billets for the army in the 1940s. The property was transformed into a hotel in the ‘70s by Paddy and Eithne Fitzpatrick and renamed as the Fitzpatrick Castle Hotel, which their daughter’s family now owns and runs. 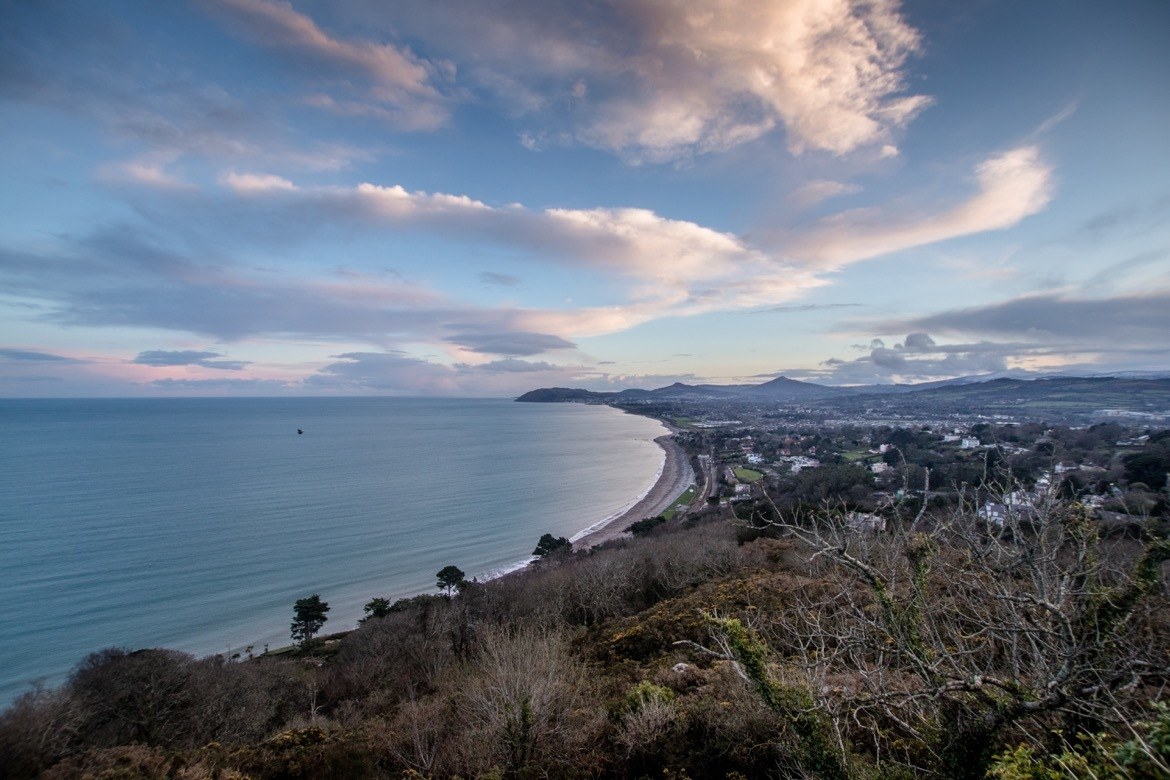 The view from the top of Killiney Hill

As one of the oldest castles in Ireland, Barberstown Castle has had a long, storied history since being built in 1288. 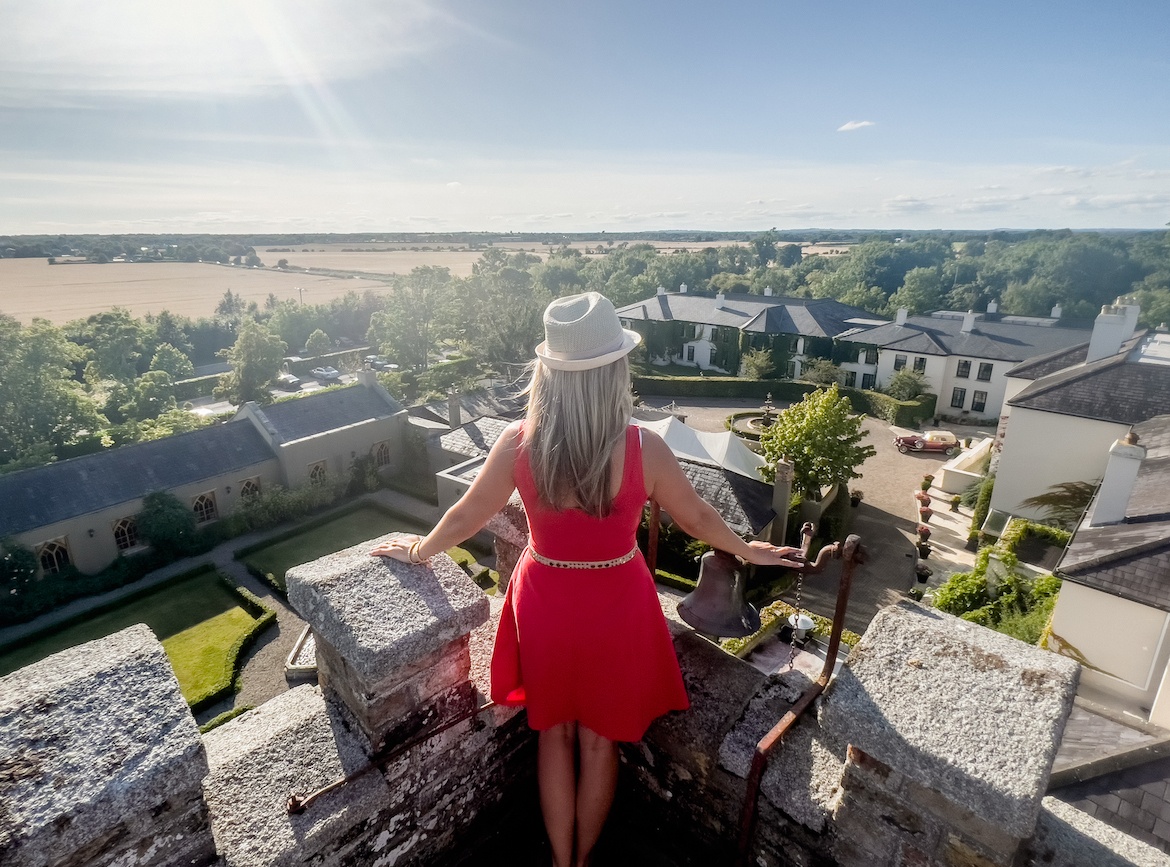 Looking down at Barberstown Castle

It first opened as a small guesthouse in the 1970s, and while it has been expanded to nearly 60 rooms its retained its 13th century charm, including the original Medieval Castle Keep

Barberstown Castle is perhaps best known for once being owned by music legend Eric Clapton, and one of his guitars is proudly displayed near the Garden Bar. 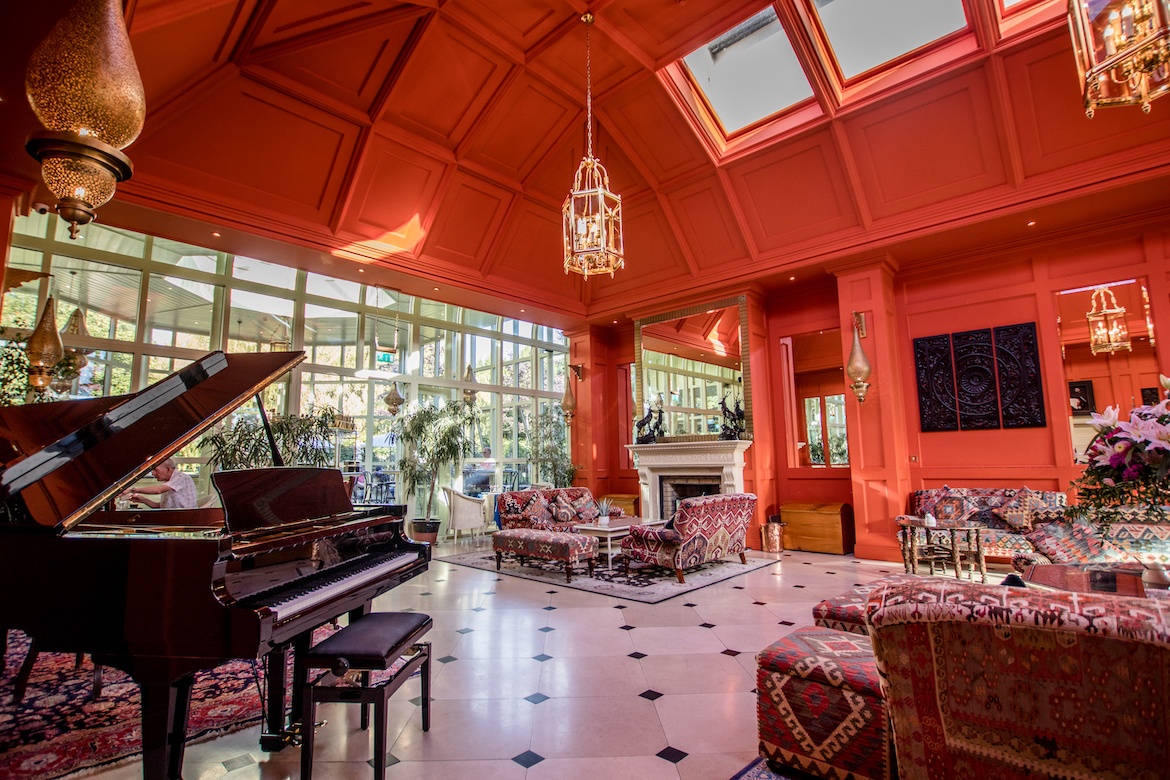 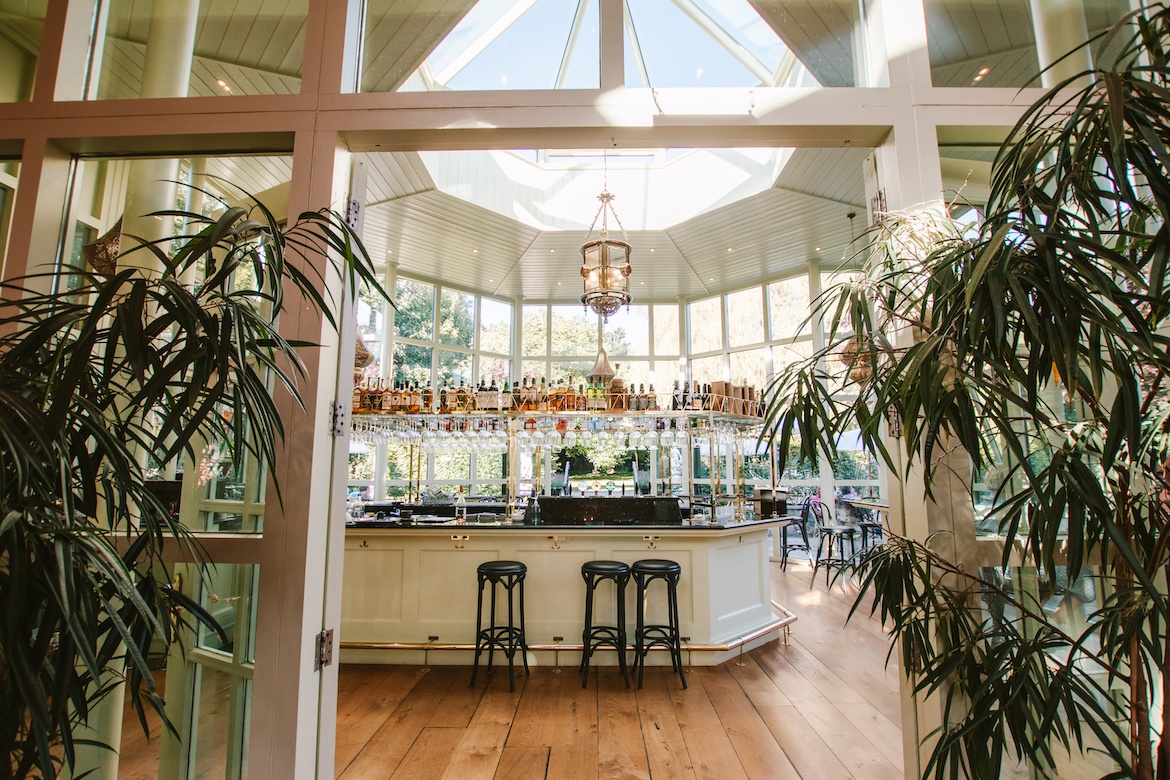 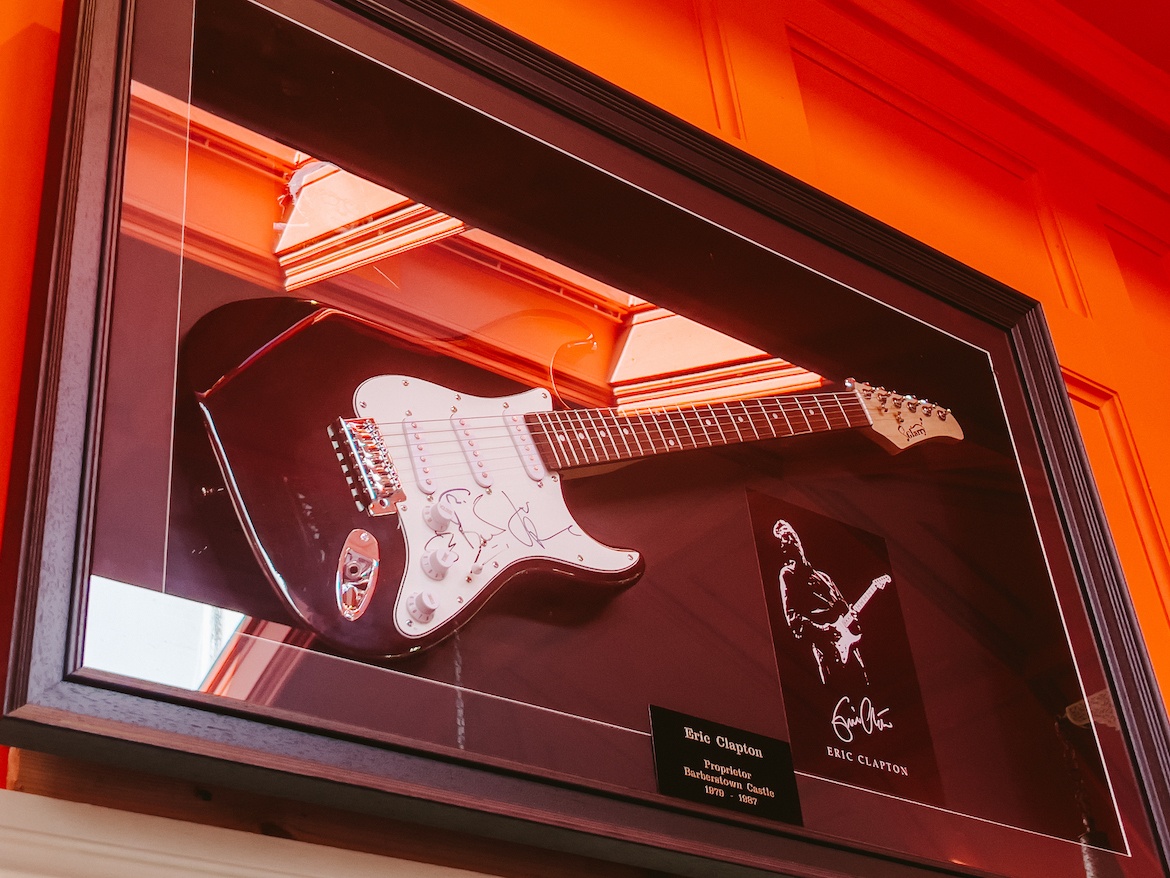 The large rooms overlook the courtyard, and have elegant finishings like four poster beds and separate sitting areas. Click here to book 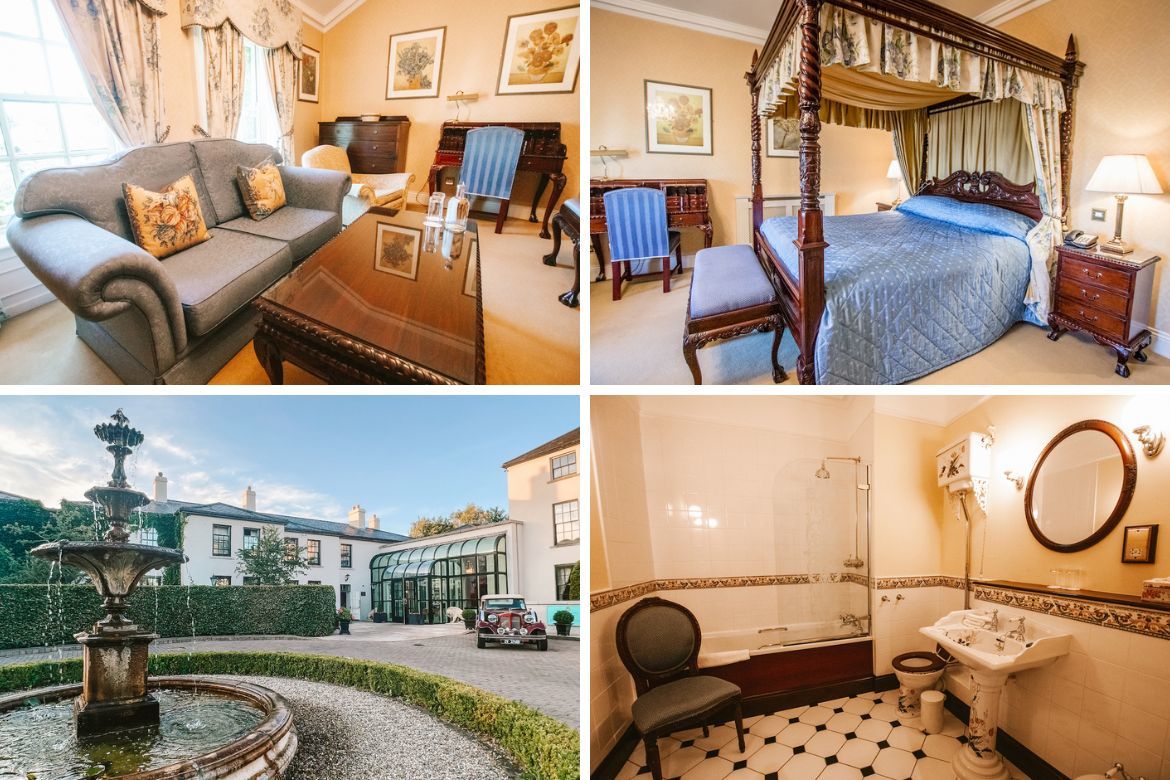 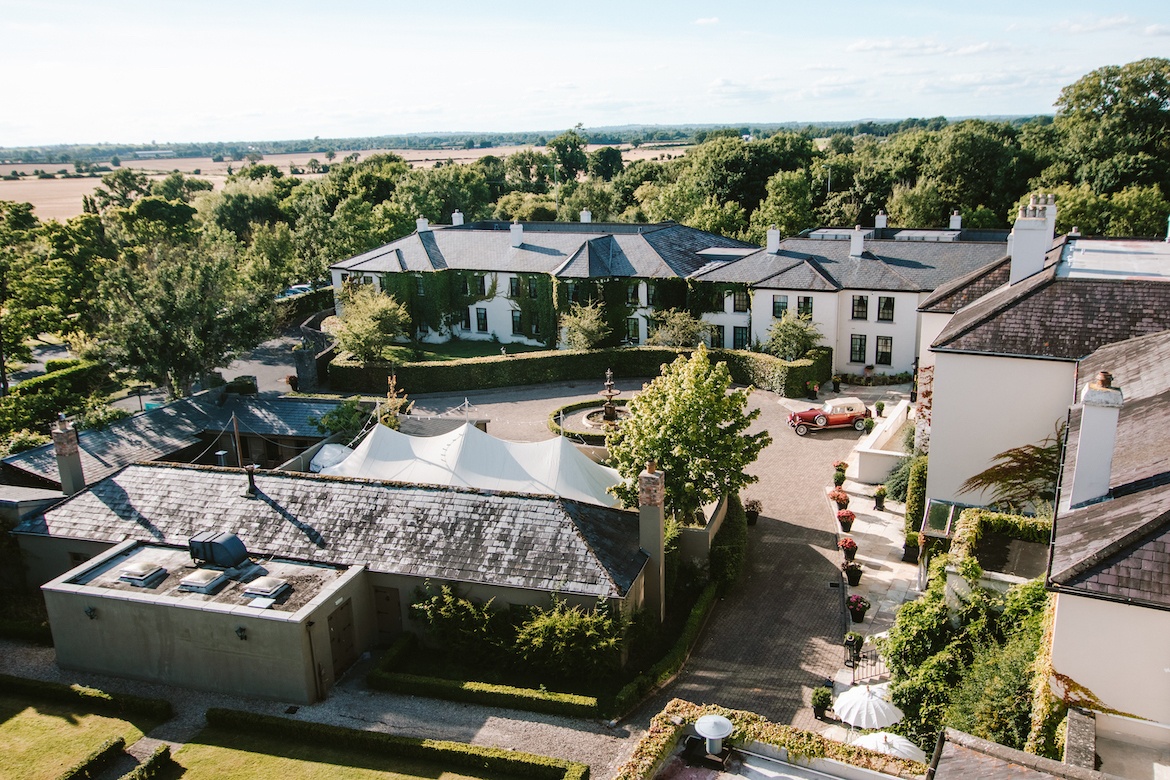 Surrounded by the serene Killeshin Hills along Ireland’s Ancient East with the Mullaghreelan Woods at its doorstep, Kilkea Castle is the perfect place to hunker down for a few days and get away from it all.

Located about a 60-90 minute drive south of Dublin (depending on if you hit rush hour traffic), the crown jewel of the 180-acre estate is the 12th century castle which looks untouched by the hands of time, and has a place in Irish lore as a former home to prominent members of the Fitzgerald family, and Richard de Clare (‘Strongbow’) who played a key role in the Anglo-Norman invasion of Ireland. 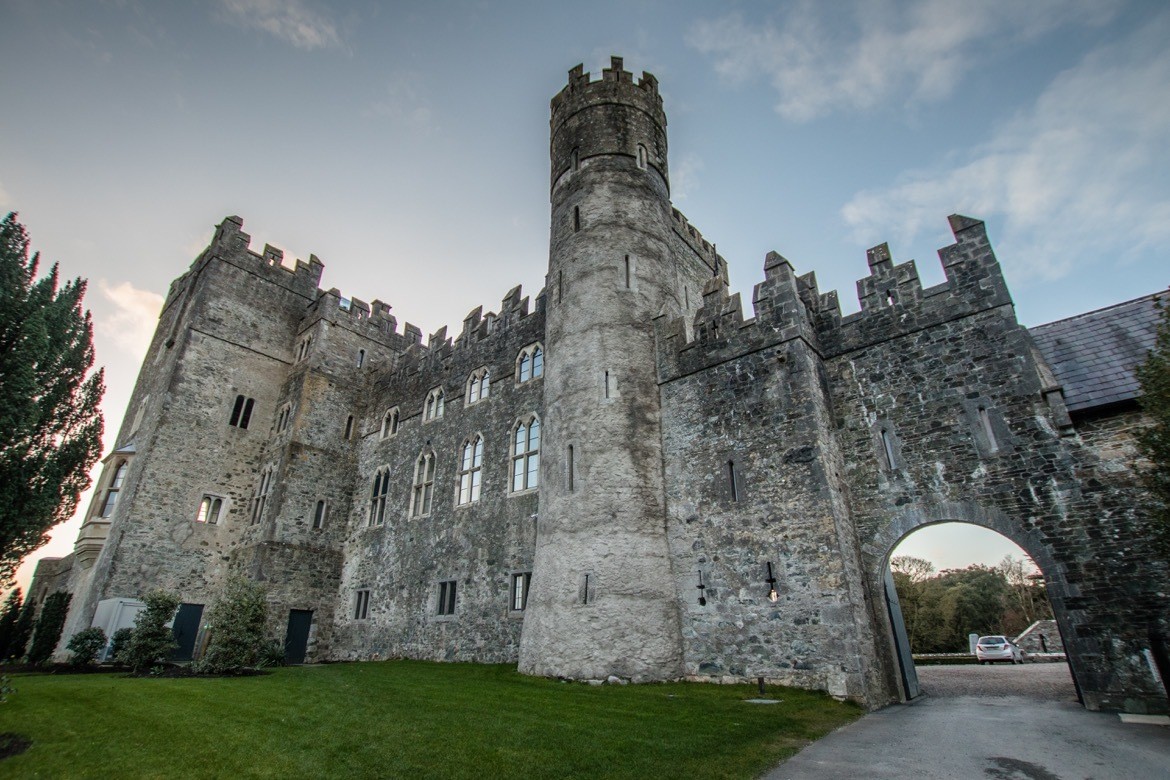 The 140-room resort also has modernized Carriage Rooms in the adjoining courtyard, and Lodges which are perfect for larger groups thanks to the adjoining bedrooms and self-catering setup. Click here to book 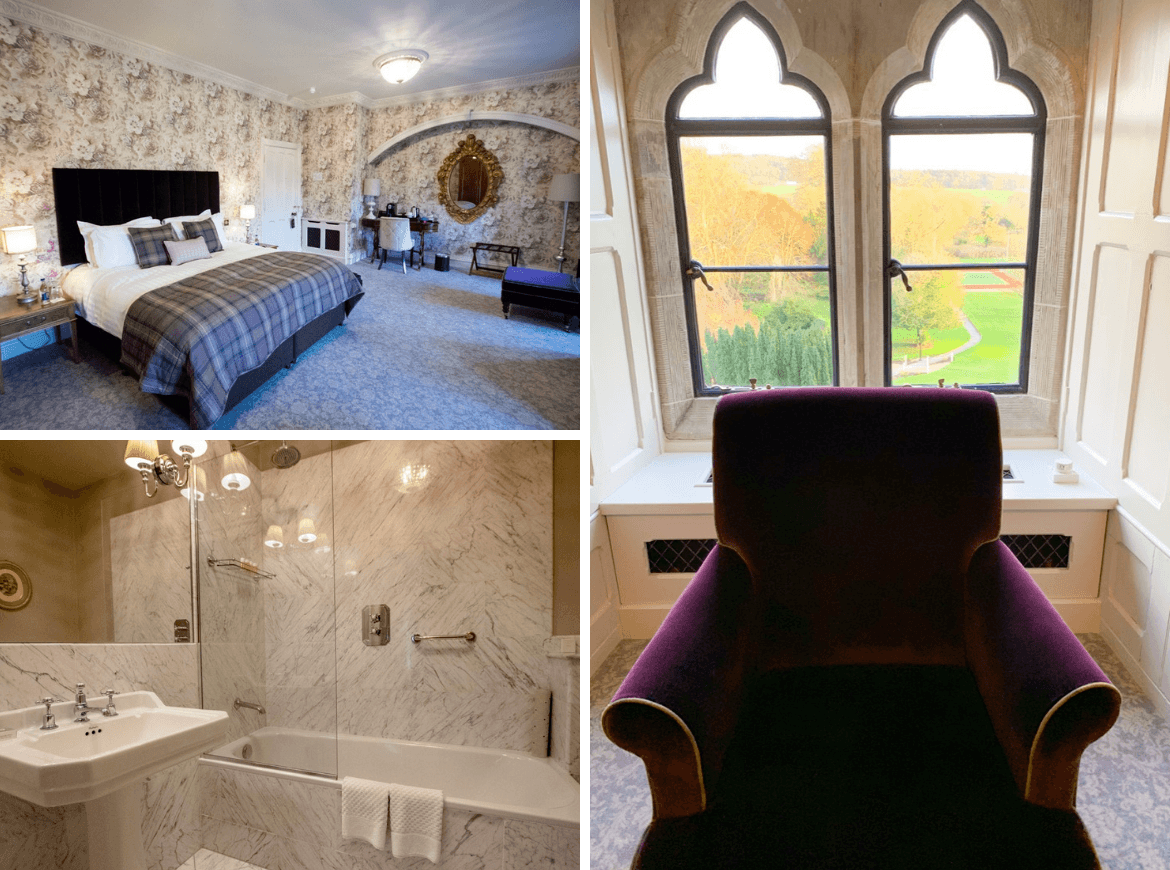 There’s plenty to do at Kilkea Castle, including noble activities like falconry, tennis, archery and horseback riding in the Wicklow Hills. Guests love exploring the woodlands, visiting nearby landmarks like the Castletown House & Gardens or Mondello Park, and enjoying a leisurely Lazy River float down the River Greese (with a glass of wine in hand, natch).

The estate also boasts an 18-hole championship golf course with fairways which wind around the castle, making for a brag-worthy day on the links. 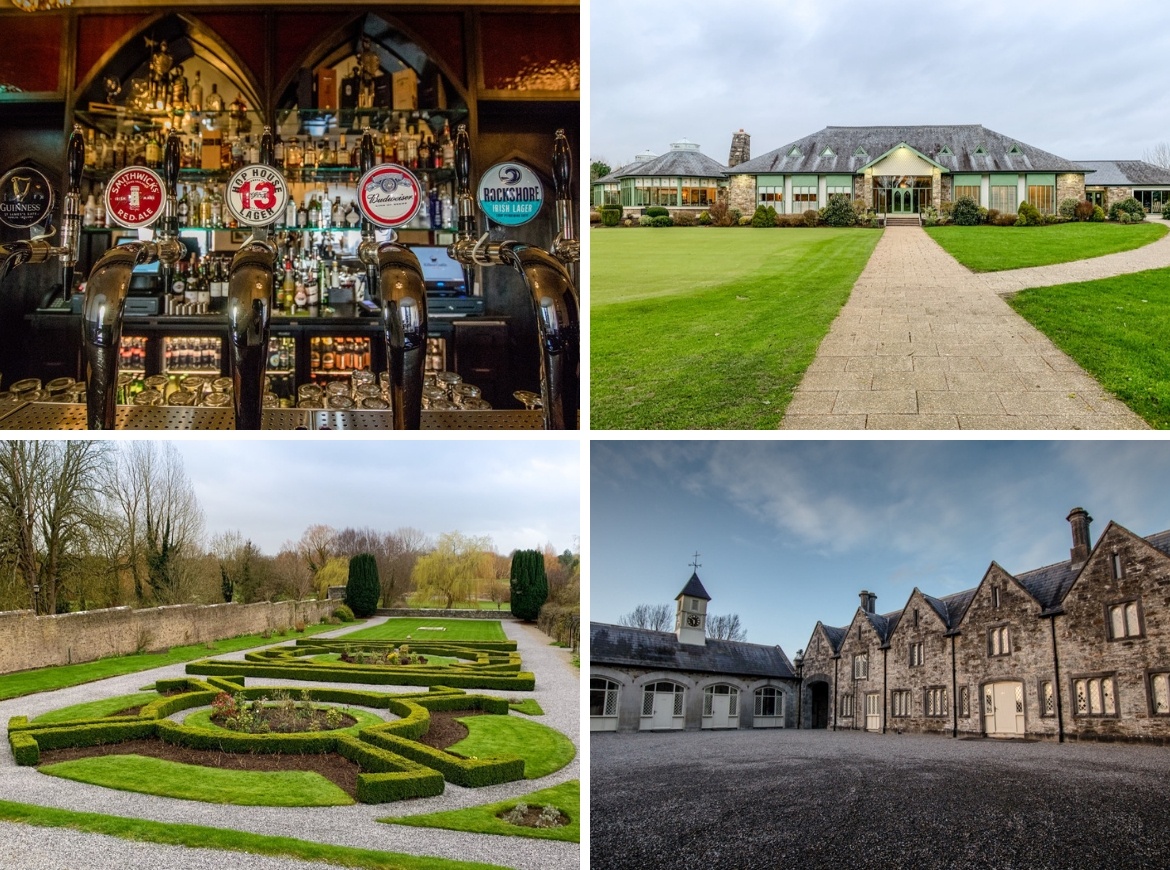 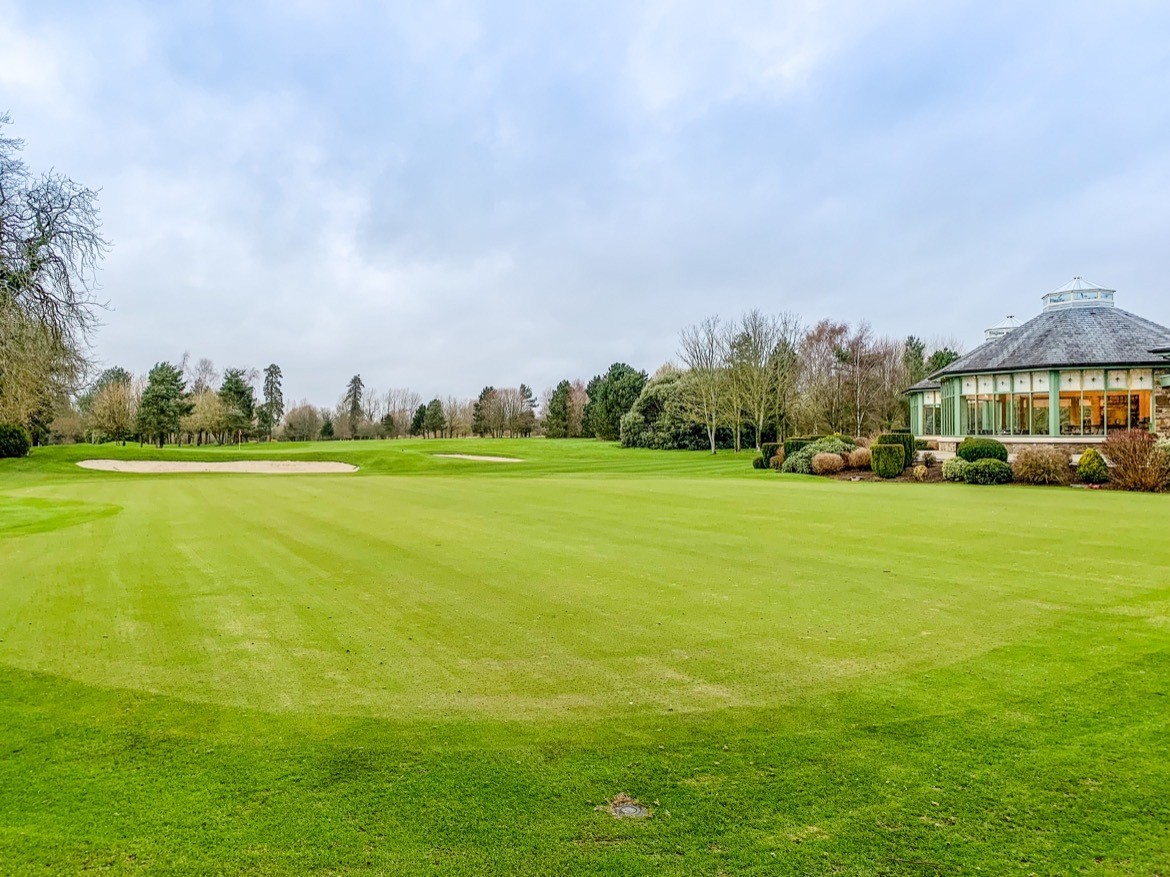 The golf course at Kilkea Castle

The impressive K Club Hotel & Resort is ranked as one of the most luxurious castles near Dublin, Ireland, with a long history of providing five-star service. Only 30 minutes from Dublin in County Kildare, the lavish estate is set along the banks of the River Liffey, and framed by the rolling, green hills Ireland is famous for. 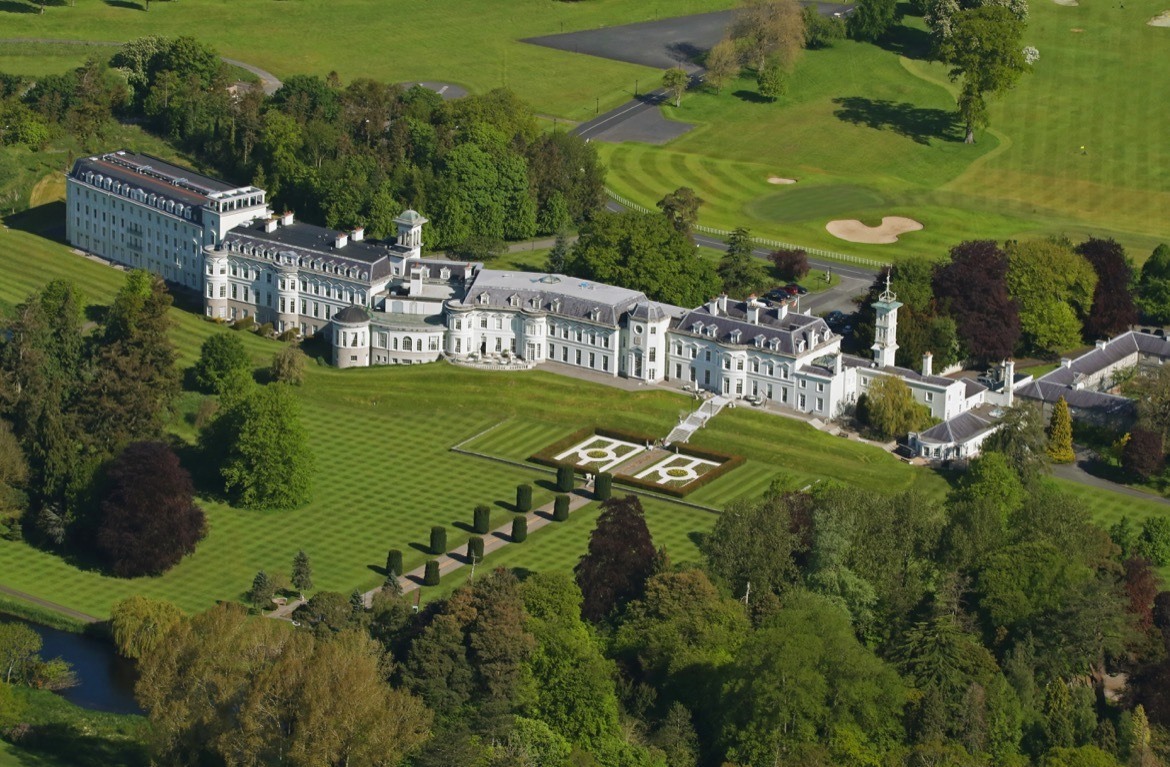 Irish castles don’t get much more lavish than this, with the 140 individually designed rooms drawing inspiration from French chateaus with rich wallpaper, duck down duvets and overstuffed couches. A 24-hour valet service is available, and there’s no shortage of activities including clay shooting, whiskey and wine tastings, archery, kayaking, falconry, garden walks and cycling.

Want to be pampered like a princess? Book into the K Spa for a royal rub down, which houses seven treatment rooms, private suites and an aromatic garden in the serene 20,000 space. While all that should be enough to tick the boxes of any noble, the palatial property is actually best known for its greens; The K Club has played host to the 2006 Ryder Cup and 13 European Opens on its Arnold Palmer-designed courses, making it mecca for golfers. 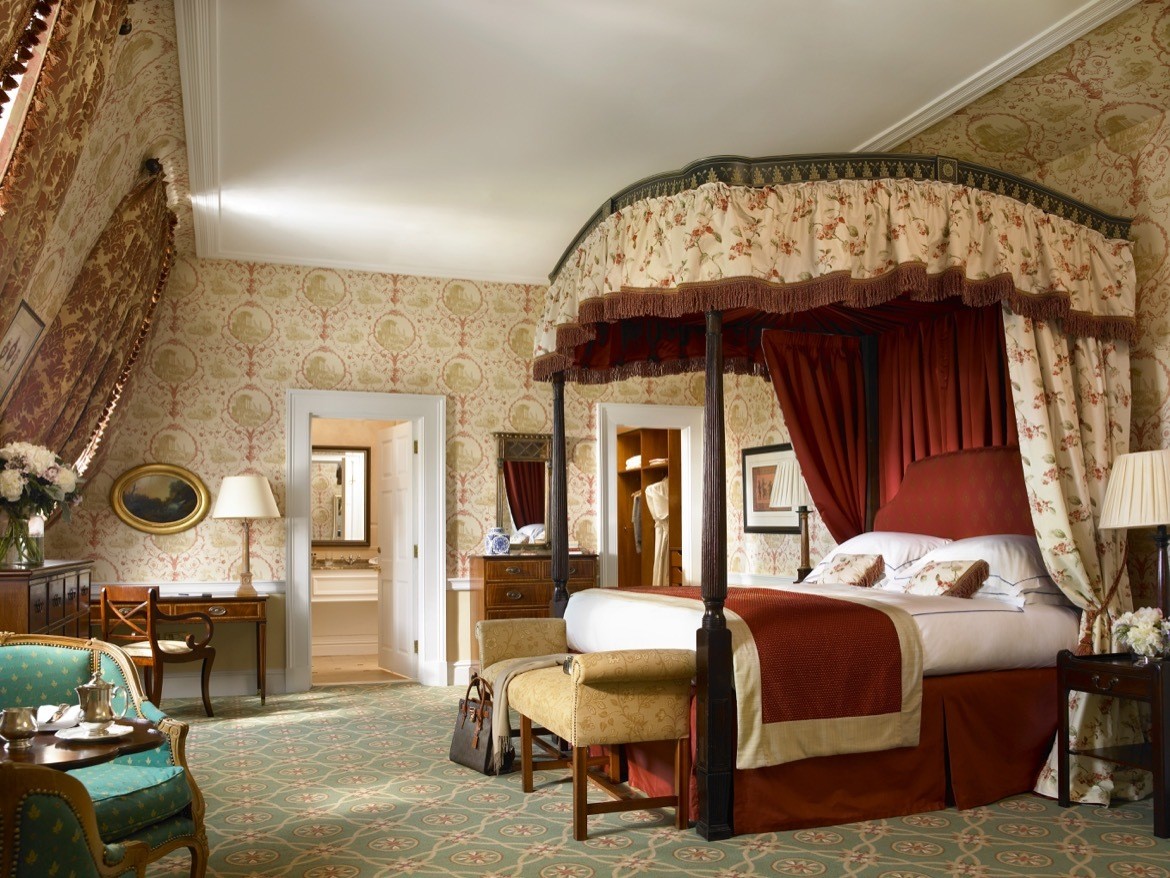 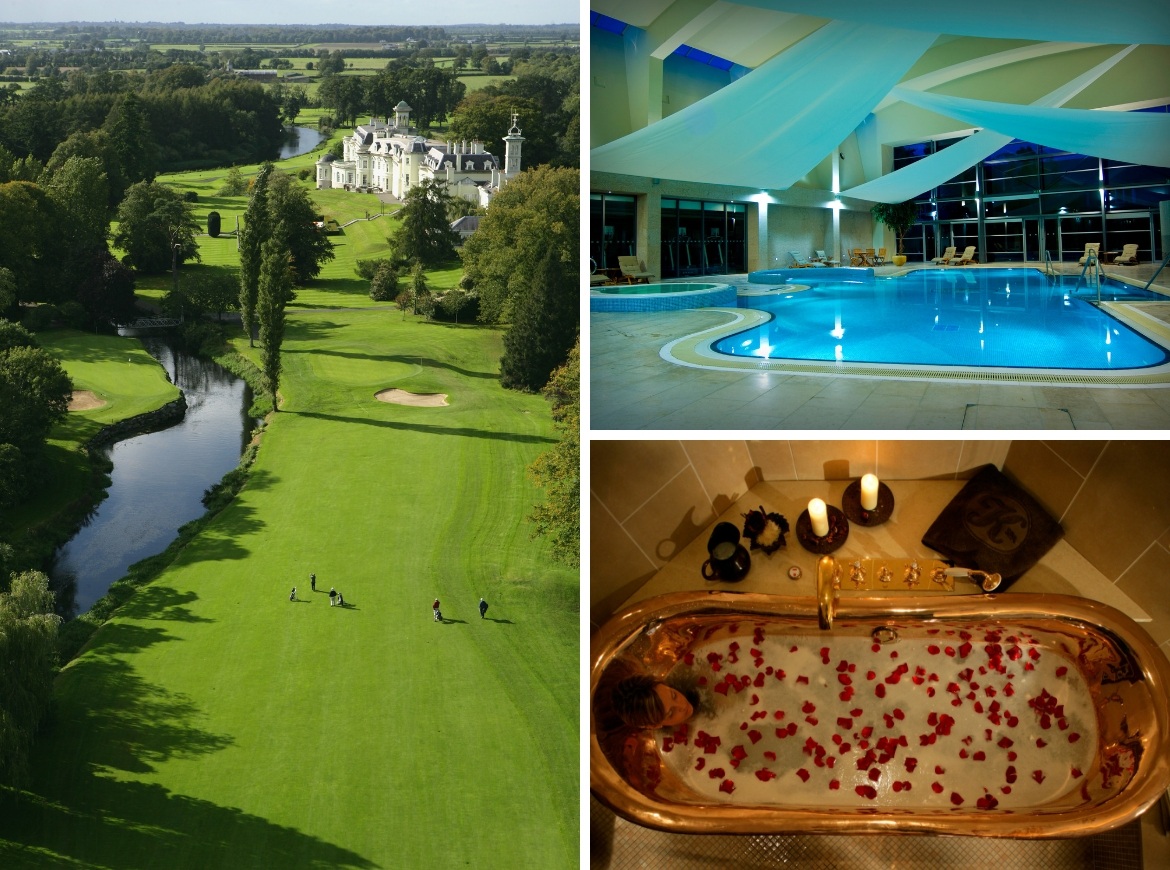 Worthy of a stop on every Dublin castle tour, a weekend spent at this gem in the Irish countryside is the ultimate luxury experience fit for a king. Click here to book

Globe Guide visited some of these castle hotels near Dublin compliments of the properties. As always, hosts have no editorial influence on articles. 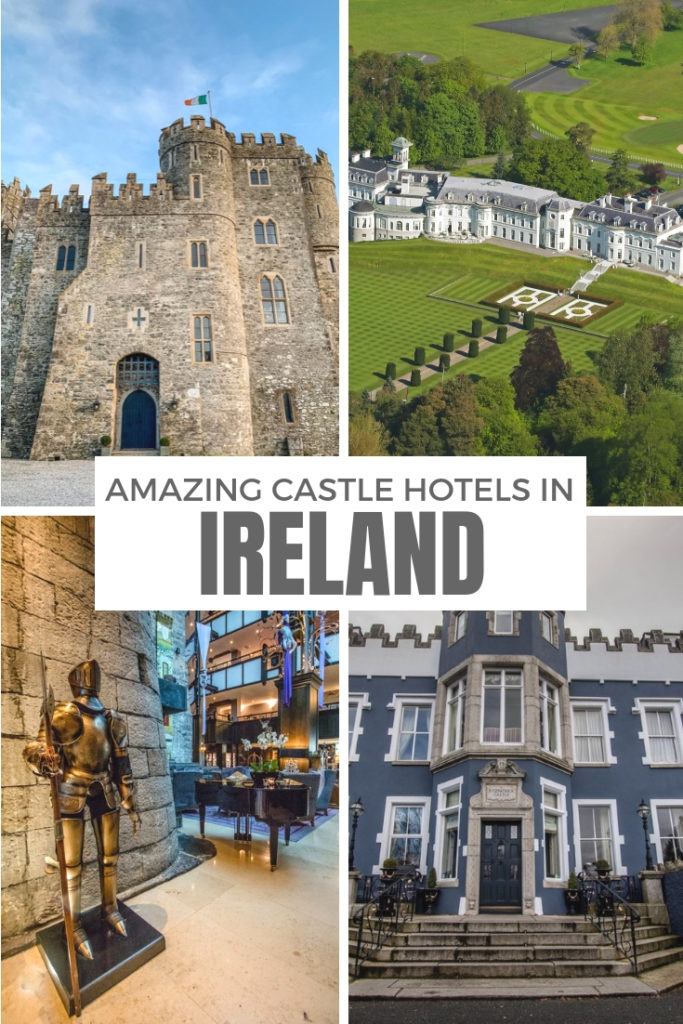 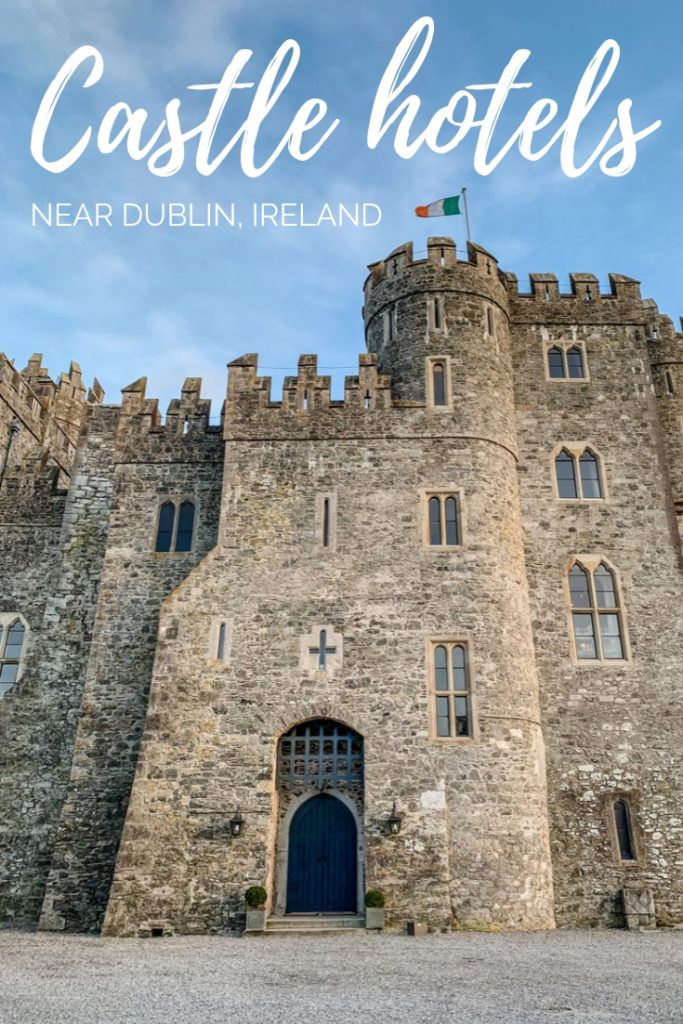 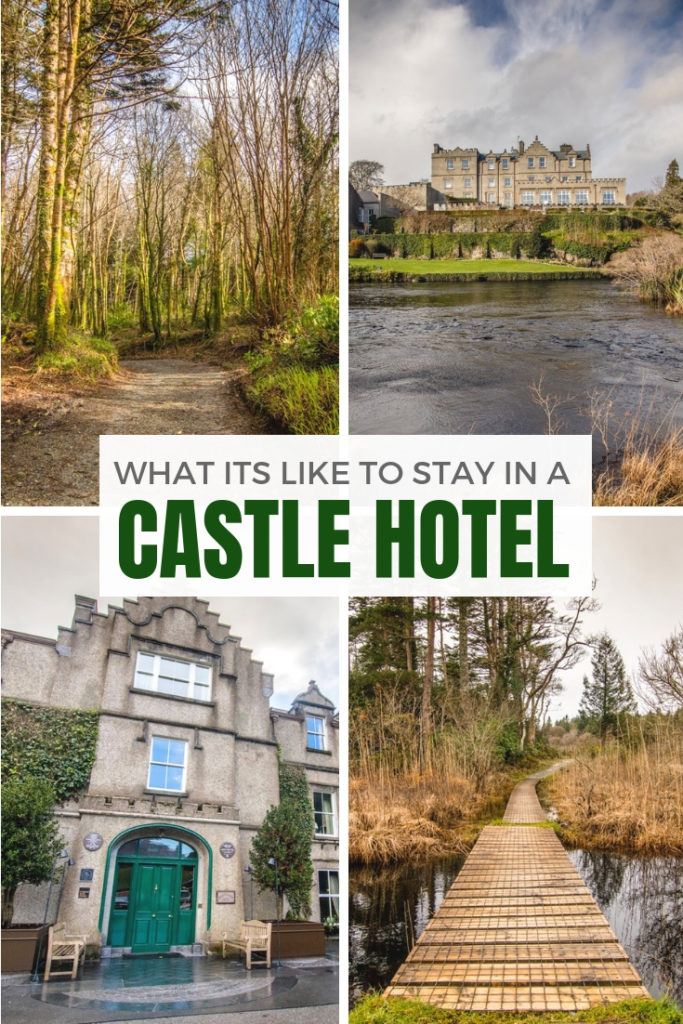