10 Calgary Stampede hacks that you need to know 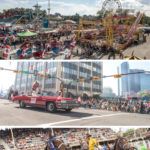 Move over Christmas: ask any born and raised Calgarian, and they’ll tell you that the most wonderful time of the year is actually in July when the Calgary Stampede rolls into town. 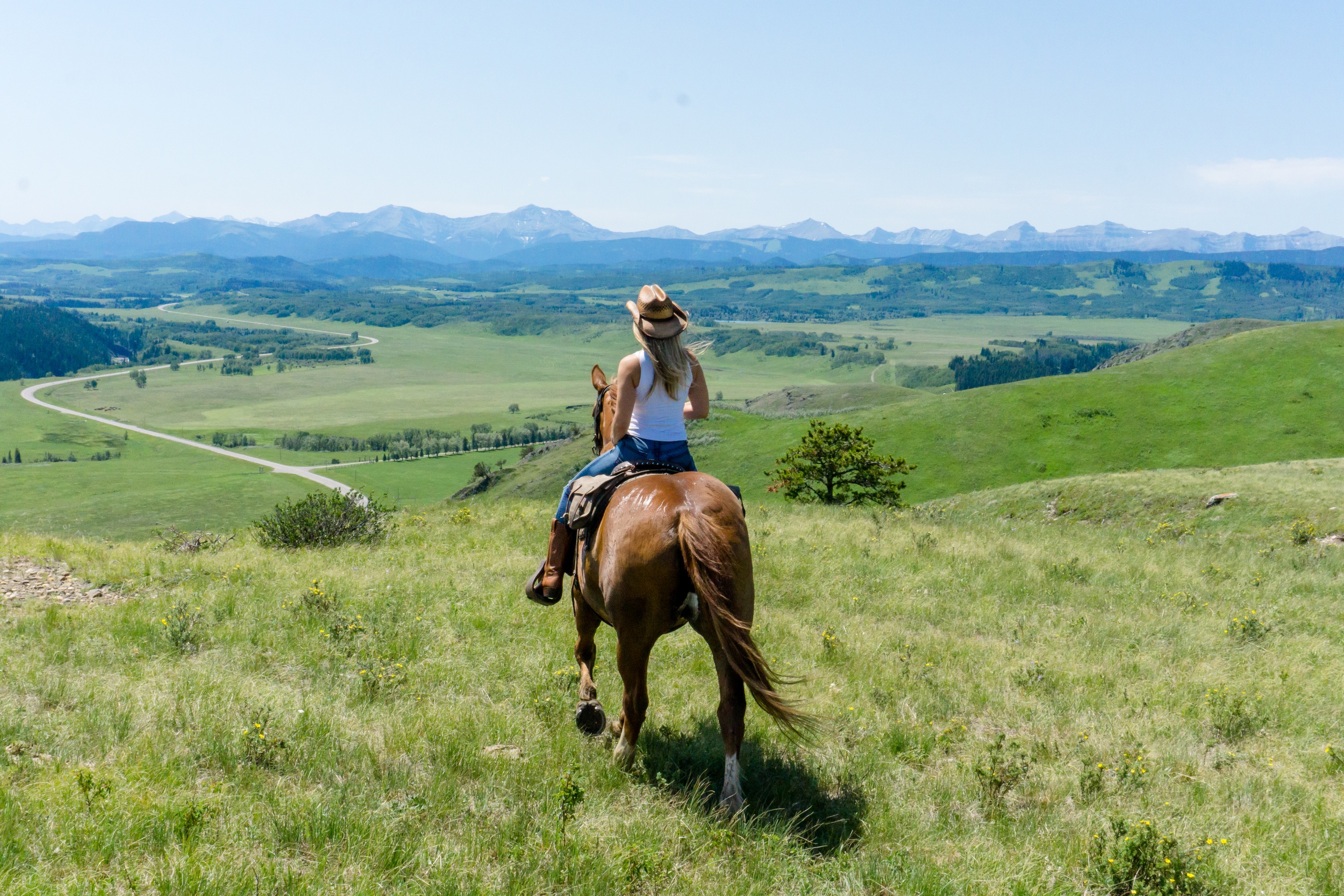 Nicknamed the ‘Greatest Outdoor Show on Earth’ for good reason, the 10-day exhibition in downtown Calgary is non-stop fun, from the action-packed rodeo, chuckwagon races and bustling midway, to the epic concerts, raucous parties in beer tents and glitzy Grandstand show which caps off the night with a spectacular fireworks display.

With so much to see and do it can be a lot for even the most seasoned cowpokes to take in, so here are 10 tips and tricks that will help you make the most of the Calgary Stampede.

The entire reason the Stampede exists is because of the rodeo and Rangeland Derby, so it’s no surprise that a seat in the Grandstand is one of the hottest tickets in town. 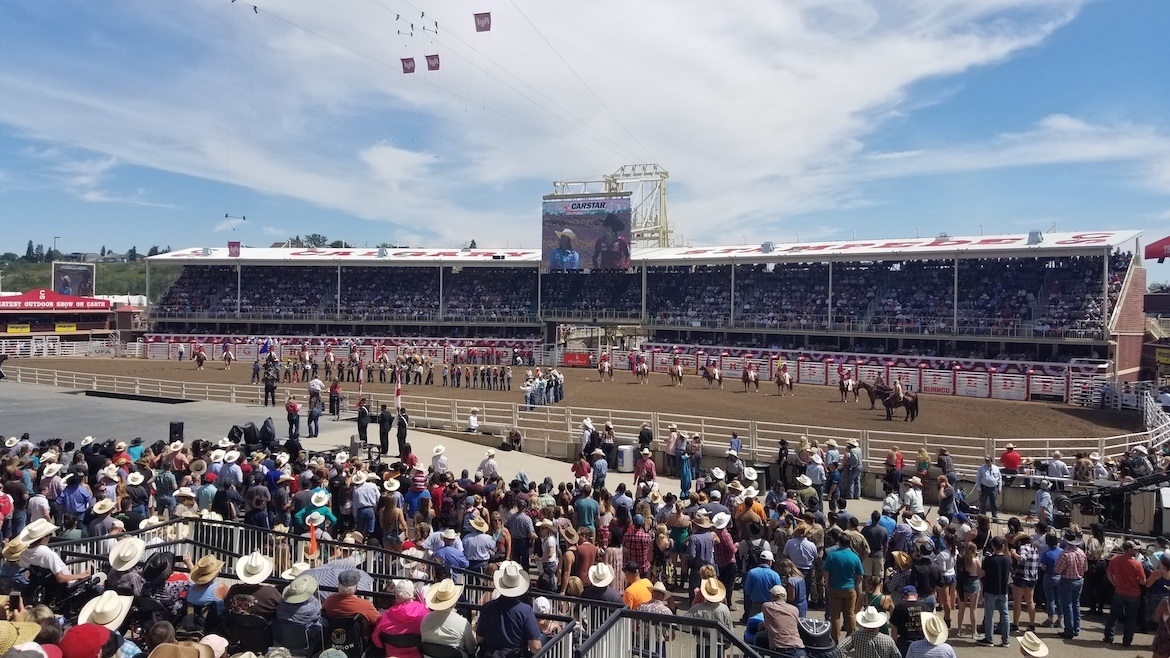 Of course that can come at a price, especially if you didn’t snap up tickets ahead of time online and are trying to go the reseller route.

Instead of ponying up big bucks on StubHub, head to the entrance and buy day-of tickets for the infield which usually cost less than 20 bucks. Sure, you’ll have to stand the whole time, but it’s one of the best places in the park to be since it’s as close as you can get to the action without actually riding a bull yourself. You’ll never forget the feeling of riding the rails when two dozen powerful horses thunder past during a chuckwagon race! 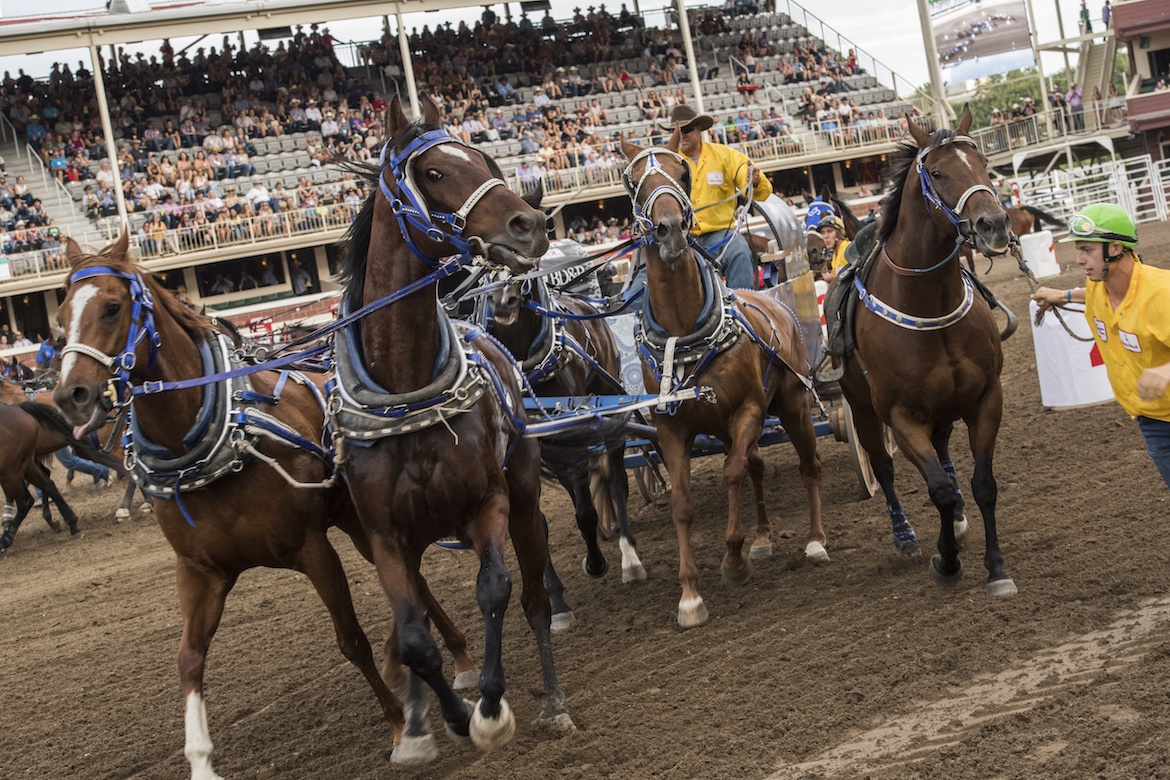 If you’re a thrill-seeker who lives for rides (zip line over the grounds, anyone?), then you’ll want to hit the midway before Stampede even starts to maximize your time.

The event technically kicks off on the first Friday in July each year, but gates open to the public on the Thursday afternoon before for Sneak-A-Peek night. The grounds aren’t as busy which means shorter lines, and as a bonus the Stampede entrance fee is also cheaper. 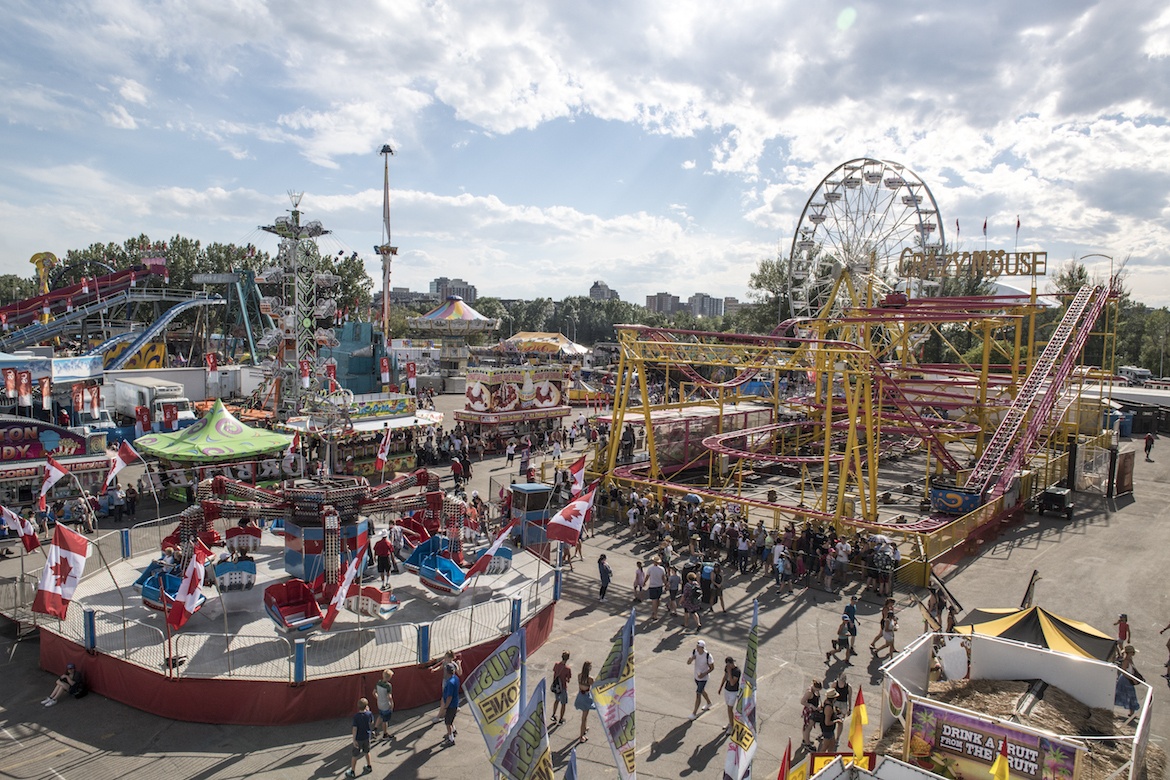 3) Get into the Calgary Stampede for free

Speaking of admission prices, if you time your visit right you can totally avoid paying an entrance fee (which is just under $20 for adults)—which means more money for beer and mini donuts. There are plenty of deals to be had which are all listed on the Stampede’s website, including free entry right after the parade ends, and family days where kids, their parents and seniors get into the grounds for free.

Don’t forget that if you have tickets to a concert at the Saddledome or one of the events at the Grandstand, your admission to Stampede park is already included.

4) Use your cowboy boots as storage

When you’re busy two-steppin’, the last thing you’ll want to worry about is a big purse getting in the way of your dance moves. If you need extra storage space for things like your cellphone or tickets, simply tuck them into the side of your cowboy boots. 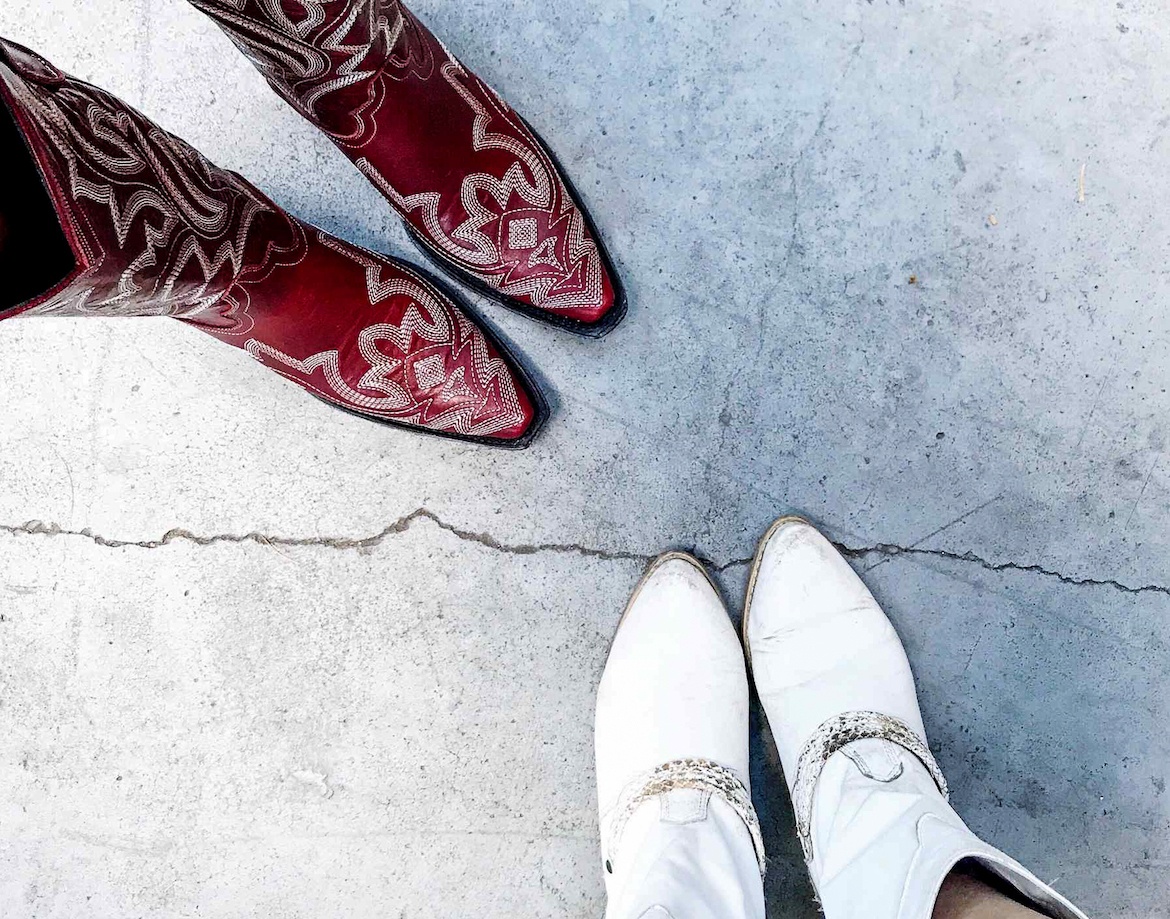 5) Go to a Stampede breakfast

Put your boring breakfast routine on hiatus, and swap your bowl of Cheerios for a good ol’ pancake breakfast. There are free breakfasts all over the city each day during Stampede week, where sizzling sausages and fluffy flapjacks are served up with a side of country music. There’s no reason to go hungry this time of year!

6) Take the Skyride to save your feet

Hot weather, big crowds and waiting in lineups are enough to tucker out any cowpoke, and with the Stampede spread out over more than two dozen blocks getting from one end of the park to the other will make you wish you had a horse and wagon.

If you can’t stand the thought of taking another step in your boots, hop on what I like to call the “Uber of the Skies”: the Skyride. Linking both ends of the grounds, the two-person cars glide over the midway, making for a leisurely trip that also grants great views of the action below. 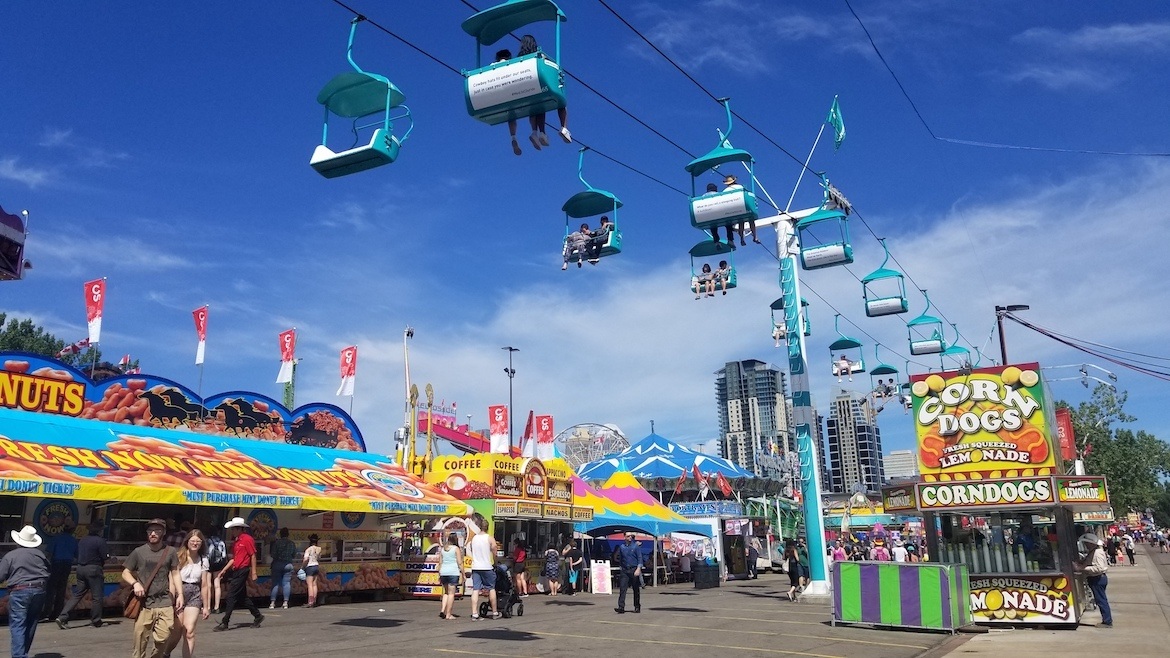 The Skyride at the Calgary Stampede

7) Break in your boots—before Stampede

Speaking of sore feet, anyone who’s ever bought a new pair of cowboy boots knows #TheStruggleIsReal when it comes to breaking them in. And unless you happen to live on a ranch or have a trip to Nashville booked, chances are the only opportunity you’ll get to wear them is during Stampede, which is legit the worst time since you’ll likely be on your feet all day long.

If possible, wear your boots around the house for a couple hours each day leading up to Stampede while doing sedentary activities like watching TV, which will start to relax the leather. Another trick some people swear by is filling a bag with water, inserting it into the toe area, then putting the boot in the freezer. The water will turn into ice and expand, which helps stretch out the boots. Science FTW!

If all else fails, high socks and band-aids are your new best friends.

The Calgary Stampede officially kicks off each year with an hours-long parade through the downtown core, complete with showbands, floats, dancing and plenty of horses. 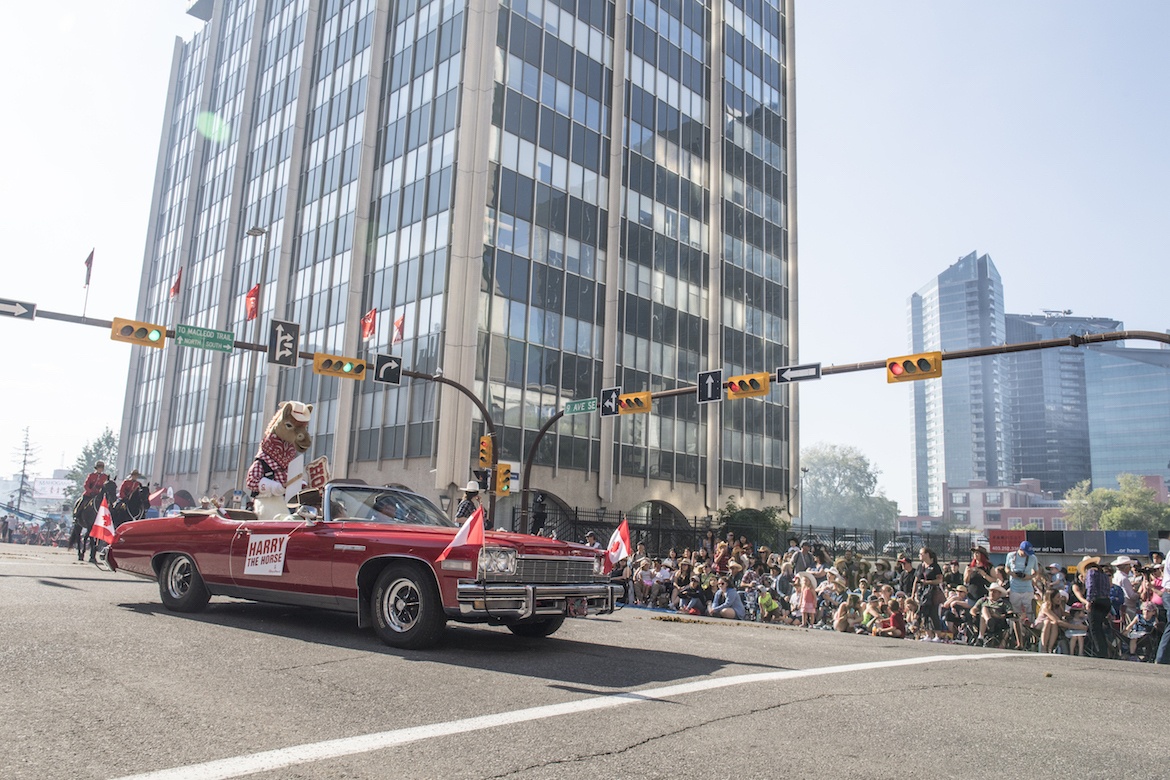 To get a good spot you’ll have to head down to the route at least a couple of hours before the action gets underway, but who wants to wake up at dawn to sit on a piece of pavement? Instead, raid your rolodex to figure out if you know anyone who works in one of the many skyscrapers overlooking the route, and head to their office on parade morning for a birds-eye view of the festivities. Or, book a lower-level north-facing room at the Fairmont Palliser hotel and try to take in the view from bed! 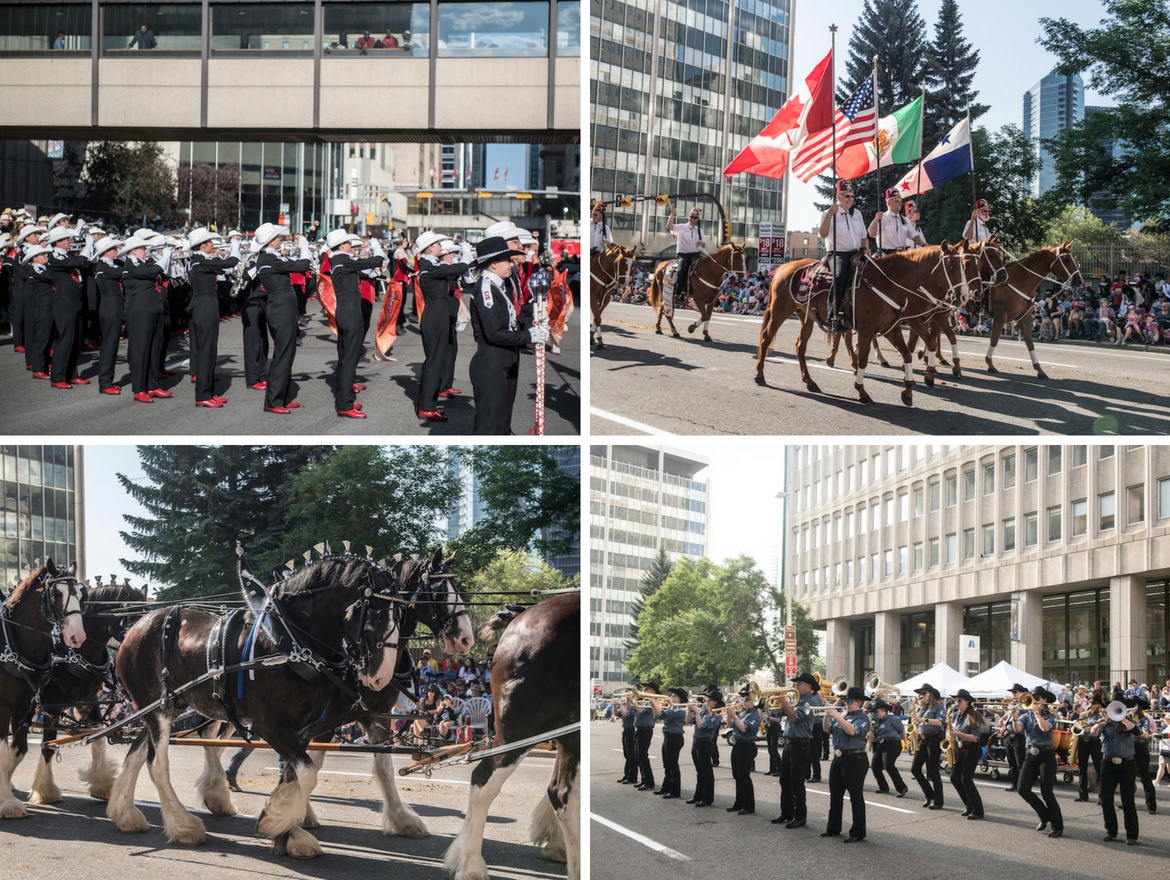 9) Have a good time away from the grounds

One of the best things about the Calgary Stampede is that you don’t even need to go to it to enjoy the festivities. From pancake breakfasts at a community hall in the suburbs, to lunchtime BBQs downtown or the beer tents that seem to spring up everywhere overnight, there’s no shortage of fun to be had around the city.

Some of the best parties (hello Bull Bustin’, Roundup MusicFest and Oxford Stomp) aren’t even that close to the grounds, so those who complain that the Stampede is too busy have no excuses not to get in on the fun. 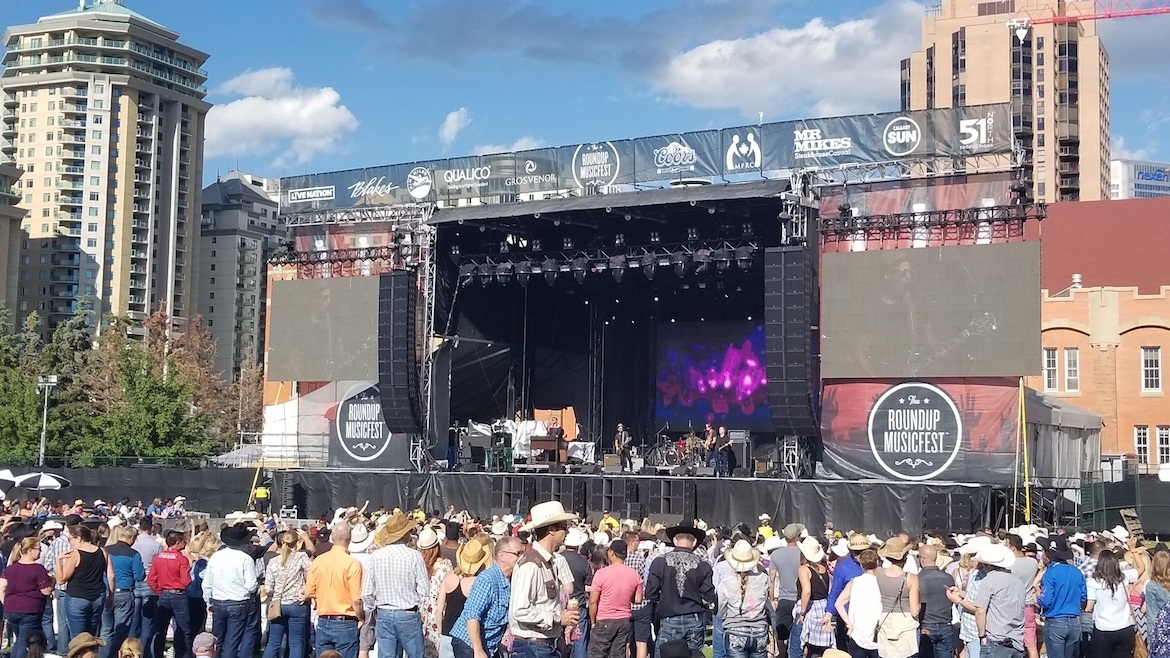 10) Hack together a cowboy outfit

You don’t need to break the bank putting together the perfect Stampede look, especially since with 10 days of parties you’re going to need a lot of outfits. Chances are you already have most items in your closet, as a pair of jeans and a bandana are really all you need to start transforming yourself into a wannabe cowpoke. A denim jacket or vest can make just about anything look cowboy couture, and Stampede is the perfect opp for ladies to get some use out of those jean shorts and skirts or fringe bag, while gents can whip out that plaid shirt.

A cowboy hat completes the look, and instead of springing for a Smithbilt you can pick one up for as little as $10 at one of the kiosks set up near the grounds. If you do decide to purchase a Stampede staple, invest in a good pair of a cowboy boots which can turn just about any city slicker get-up into something worthy of a day on the open range. 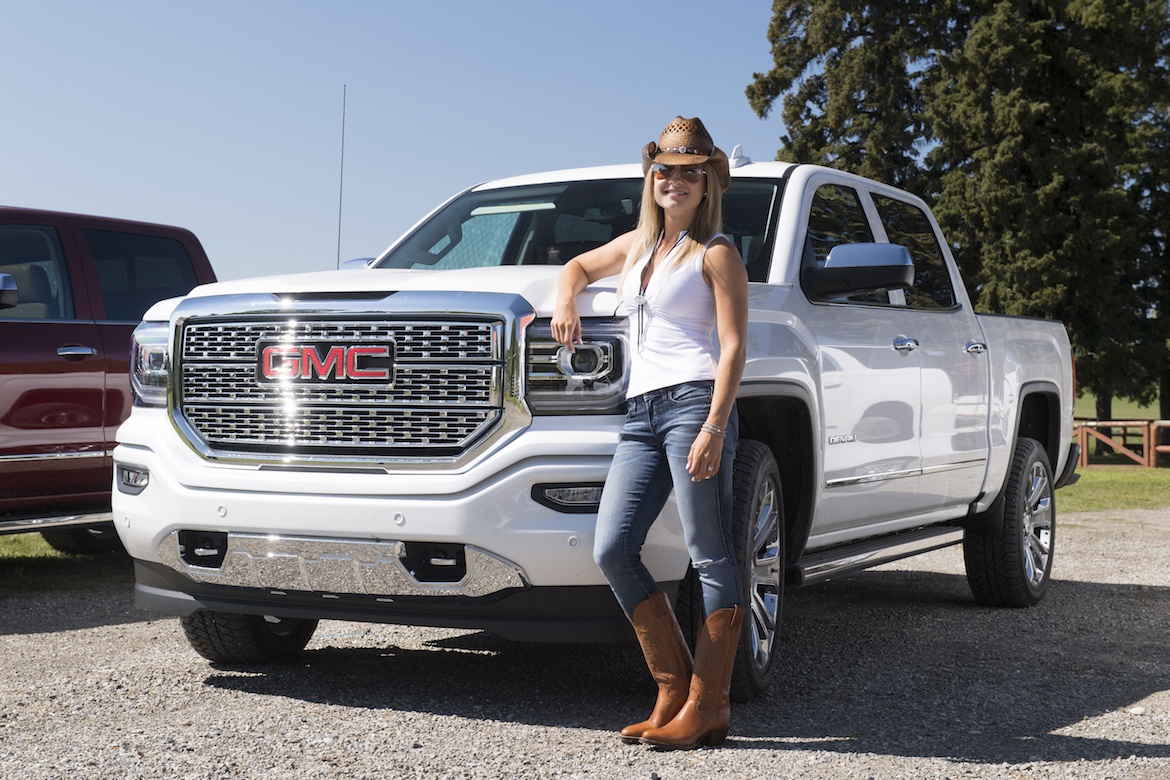 Hotels near the Calgary Stampede:

Hotel Arts: This boutique hotel is absolute perfection, from the trendy modern rooms to the gorgeous pool that’s the closest thing to South Beach you’ll find around these parts. Best of all, Hotel Arts is only a few blocks away from the Stampede grounds and happening areas like 17 Ave. and Stephen Avenue.Click here to book

Residence Inn Calgary Downtown: This property opened its doors in the heart of downtown Calgary in early 2019, and it’s only about a 15 minute walk to the Stampede grounds. Guests love the spacious, well-appointed rooms, fantastic views of the city skyline, amenities like a gym and laundry facilities, and the fantastic free breakfast. Click here to book 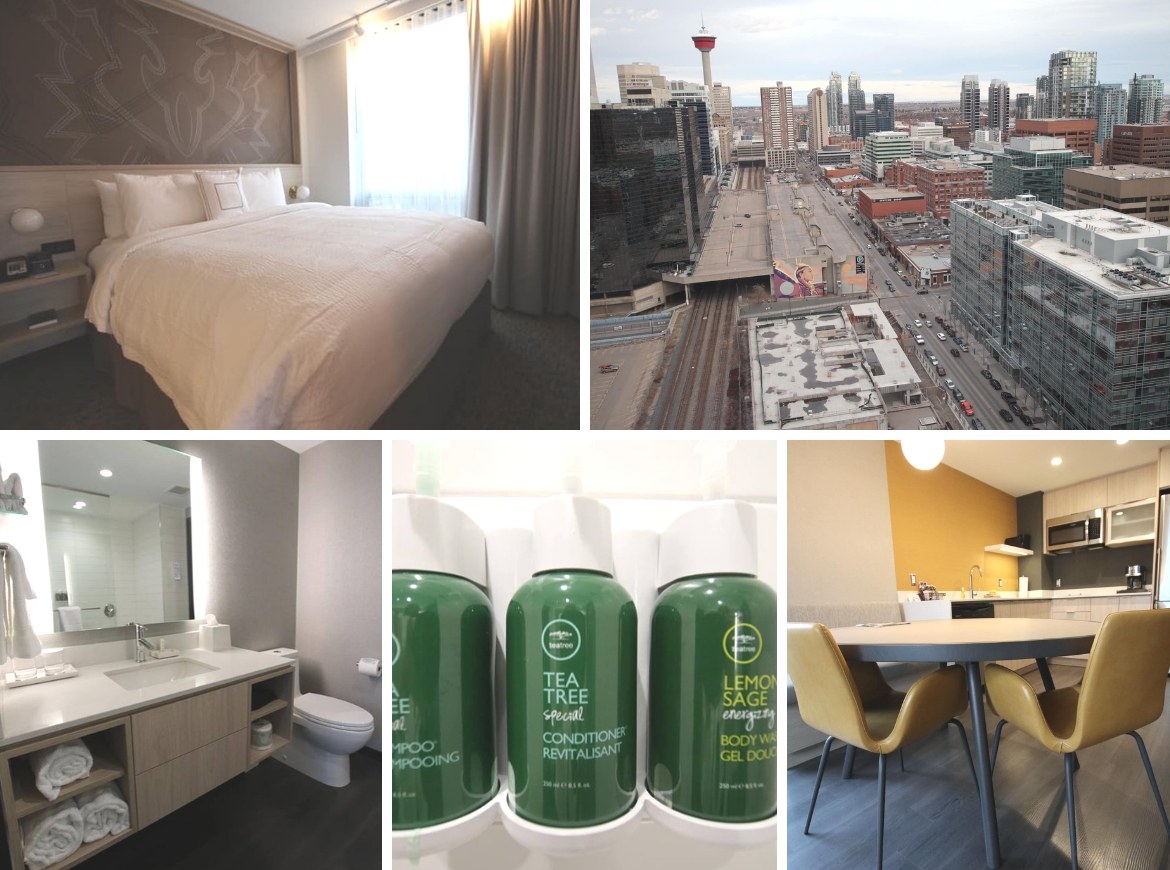 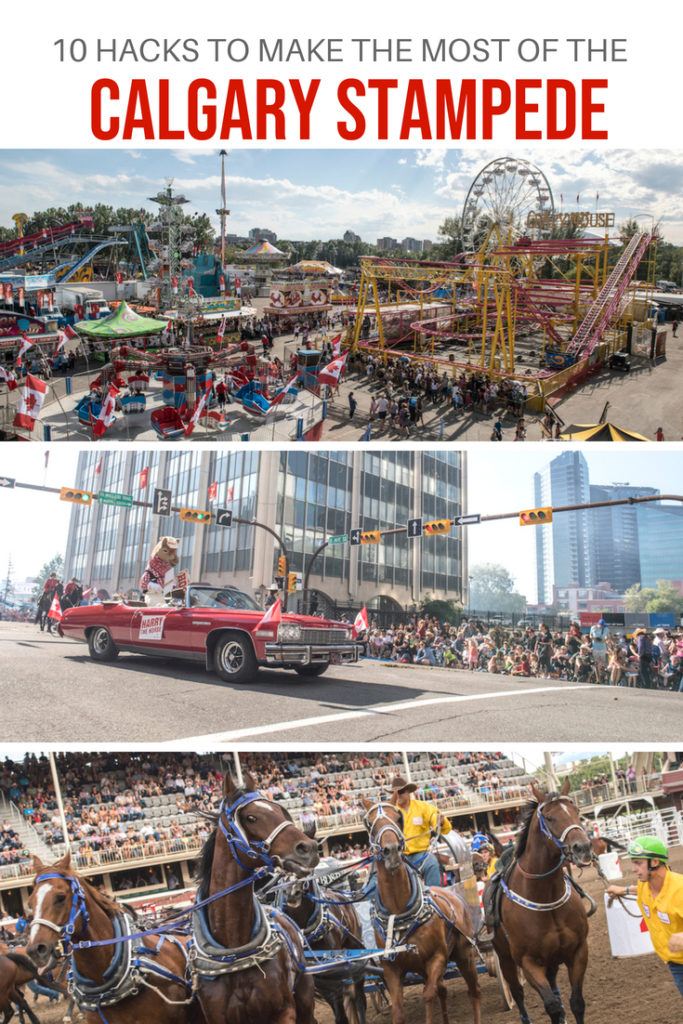 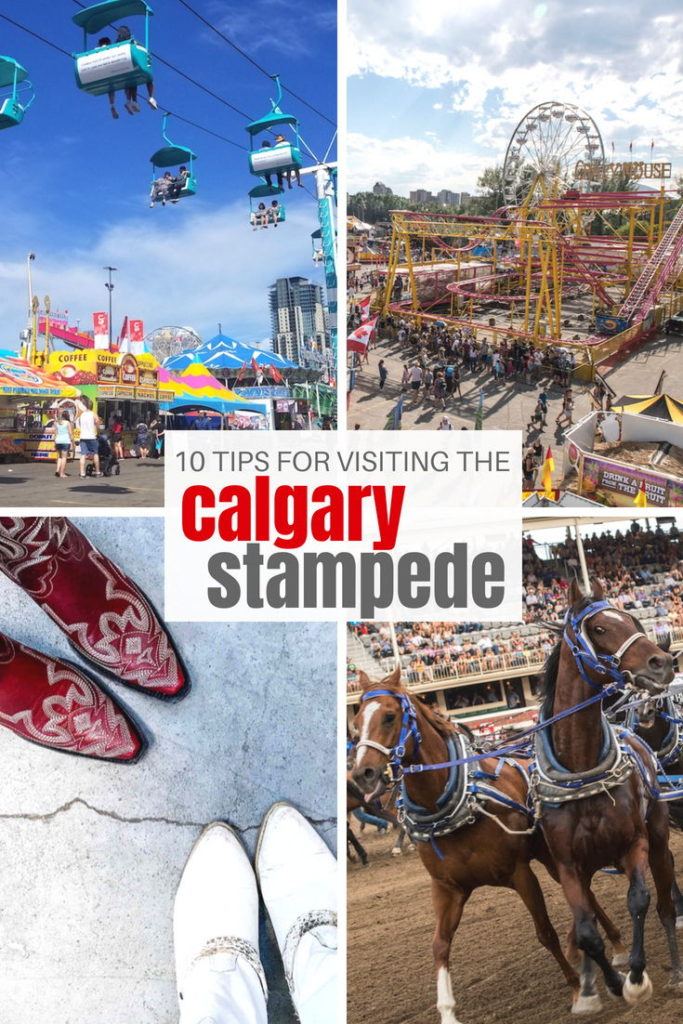 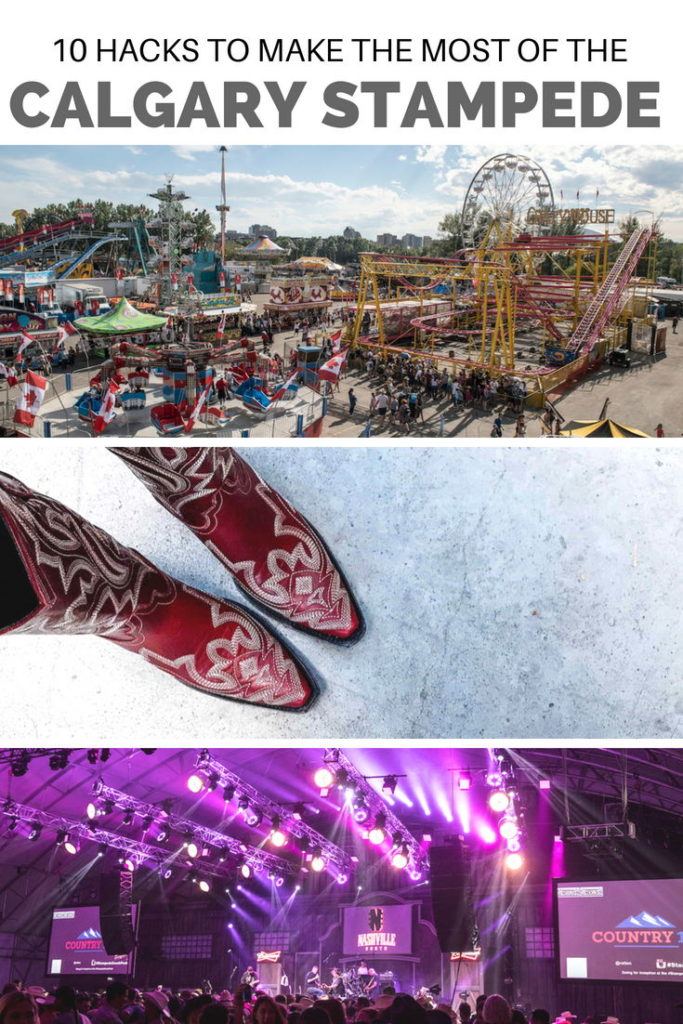