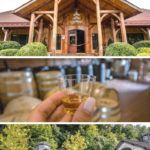 Most people head to Tennessee for the country music. Others make the trip to explore its gorgeous waterfalls and expansive parks, let loose along Nashville’s infamous party strip Lower Broadway, or maybe city hop around the state, checking out great spots like Franklin and Memphis.

I went for the whiskey. 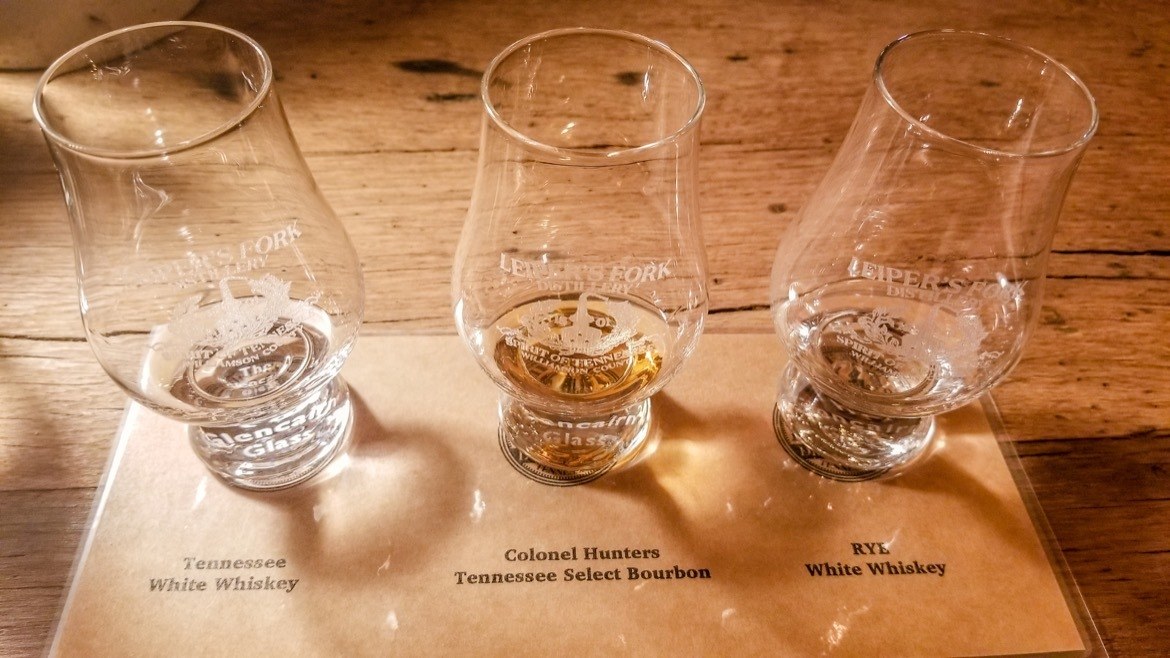 Yup, this little blonde girl from Canada flew all the way from the Great White North with a cowboy hat and boots taking up half my suitcase, with one sole goal in mind: to drink allll the Tennessee whiskey. Specifically my favourite thing ever, Jack Daniel’s.

It felt like I’d be training for this moment my whole life (OK, more like 14 years because #LegalDrinkingAge, but you get the idea). For as long as I can remember, Jack & Coke has been my drink of choice, much to the amusement of bartenders who usually do a double take when I order it.

I guess I look a bit more like a champagne kinda gal—that is, until I slip on my prized possession: a black cowboy hat emblazoned with the iconic Jack Daniel’s No. 7 logo. So when I was invited down south to check out some Tennessee whiskey tours, not only did I get that plane ticket booked ASAP but I also had my entire outfit already planned out. Priorities, people. 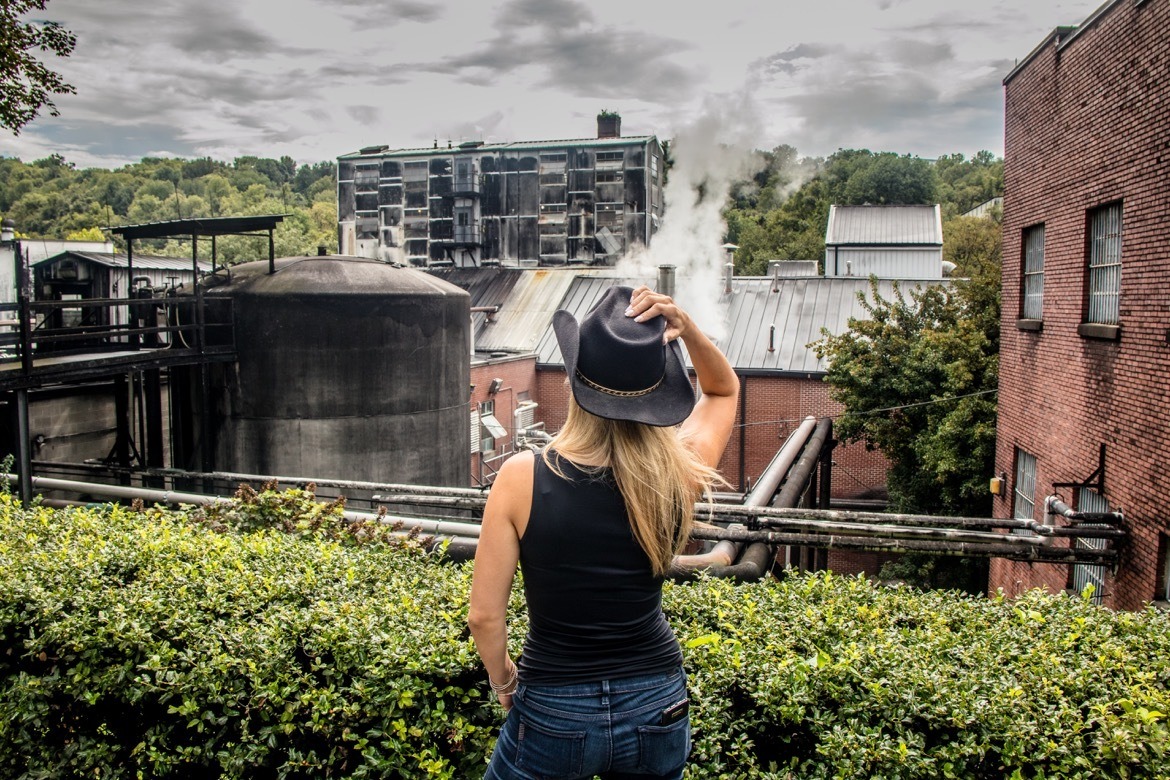 The Tennessee Whiskey Trail is made up of a couple dozen distilleries across the state, which is particularly impressive considering prohibition is still fresh in everyone’s minds, and that some counties—including the one where Jack Daniel is based—are still legally dry. 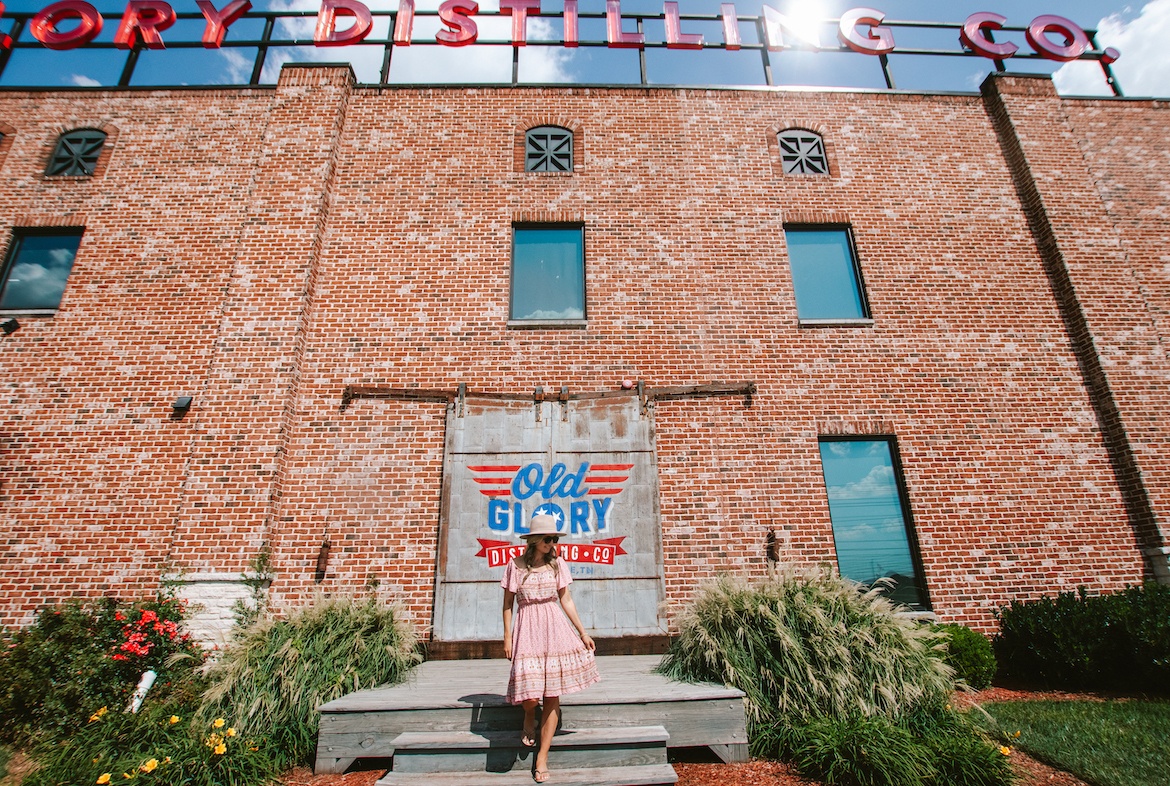 From tiny, family-run operations that hand-craft gin and vodka to massive distilleries pumping out barrel after barrel of bourbon, you can find it all here. And yes, there’s even moonshine made by distilleries in the eastern part of the region, a stone’s throw away from the storied Appalachian Trail and Great Smoky Mountains. 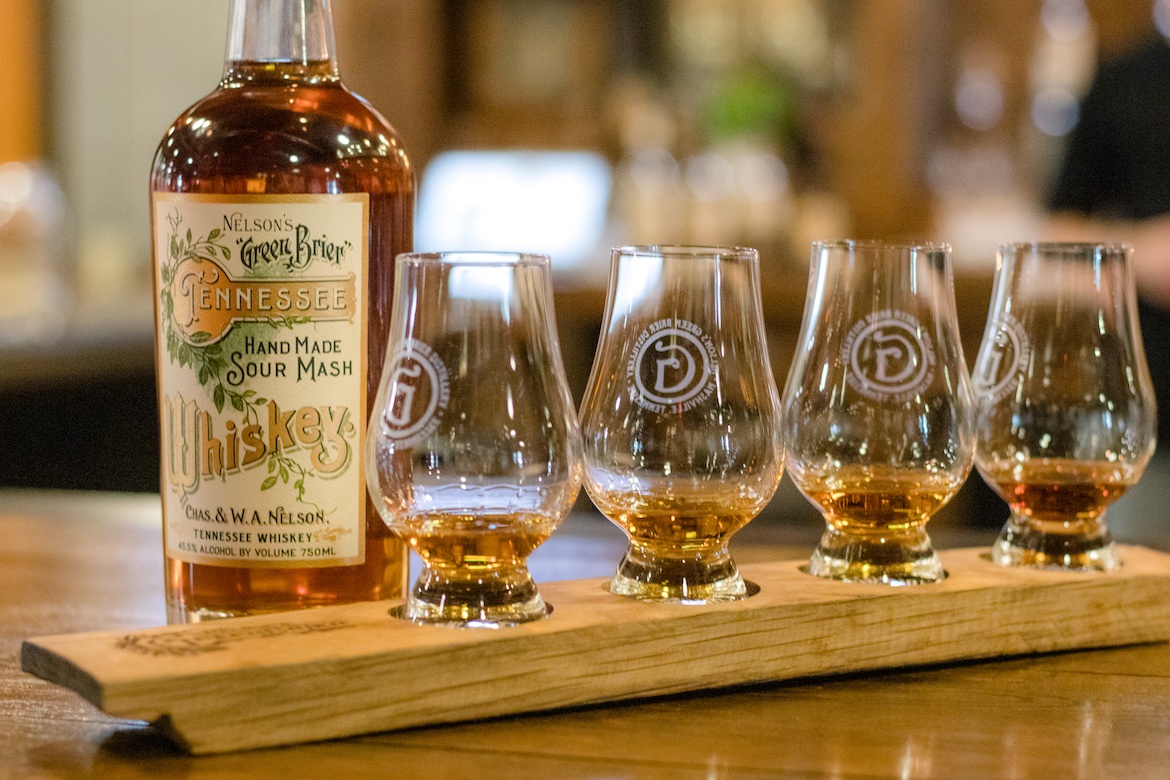 A tasting flight at Nelson’s Greenbriar Distillery in Nashville

However, the most-visited Tennessee distilleries are those found in the heart of the state, thanks to a combination of name recognition and their proximity to tourist hot spots like Nashville. That’s where I was focusing my efforts this time around, starting with a couple of cute spots a quick drive from the city of Franklin along the Masters & Makers Trail, which winds through scenic Williamson County.

After fuelling up on a hearty southern breakfast of biscuits and gravy and getting my designated driver situation sorted (safety first, y’all!), it was go time. 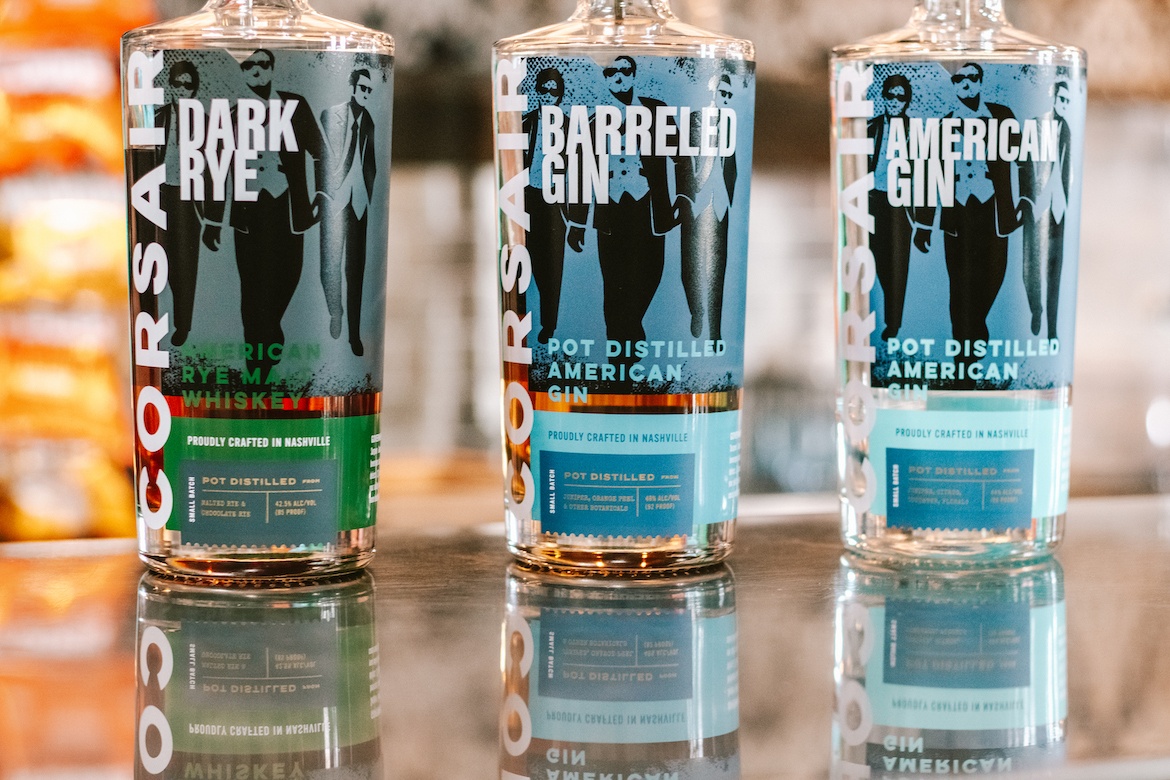 Founded by lawyer Heath Clark (whose legal office is next to the tasting room, BTW), he’s partly responsible for the recent resurgence of distilleries around the state after getting a bill passed by the senate which allowed his operation to become the first legal distillery in the county since prohibition nearly a century earlier.

The doors opened in 2014, and close to 40 distilleries have opened in Tennessee since then, up from just three previously. 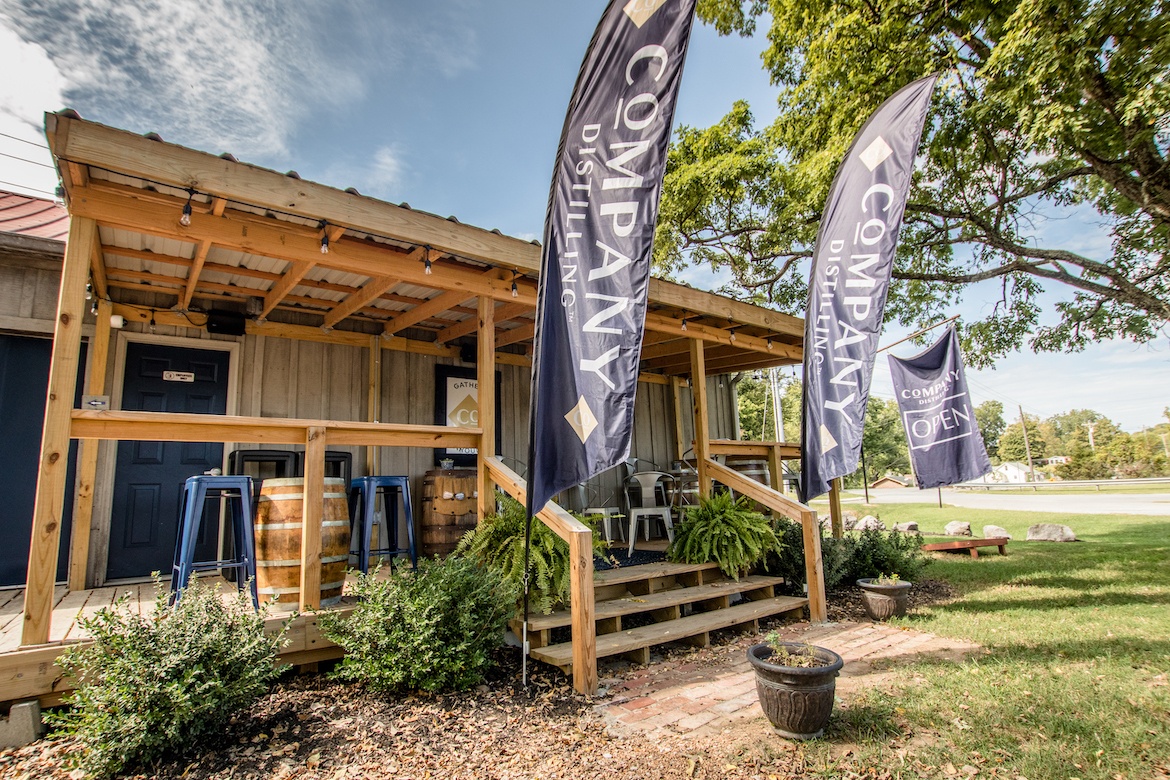 Their motto is to craft spirits they’re proud to put Clark’s name on, and “make a little bit, but make it really good.” The focus on quality over quantity is apparent while sipping on their Tennessee Bourbon, dry gin and flavoured spirits, which are all hand-bottled in the micro batch distillery. 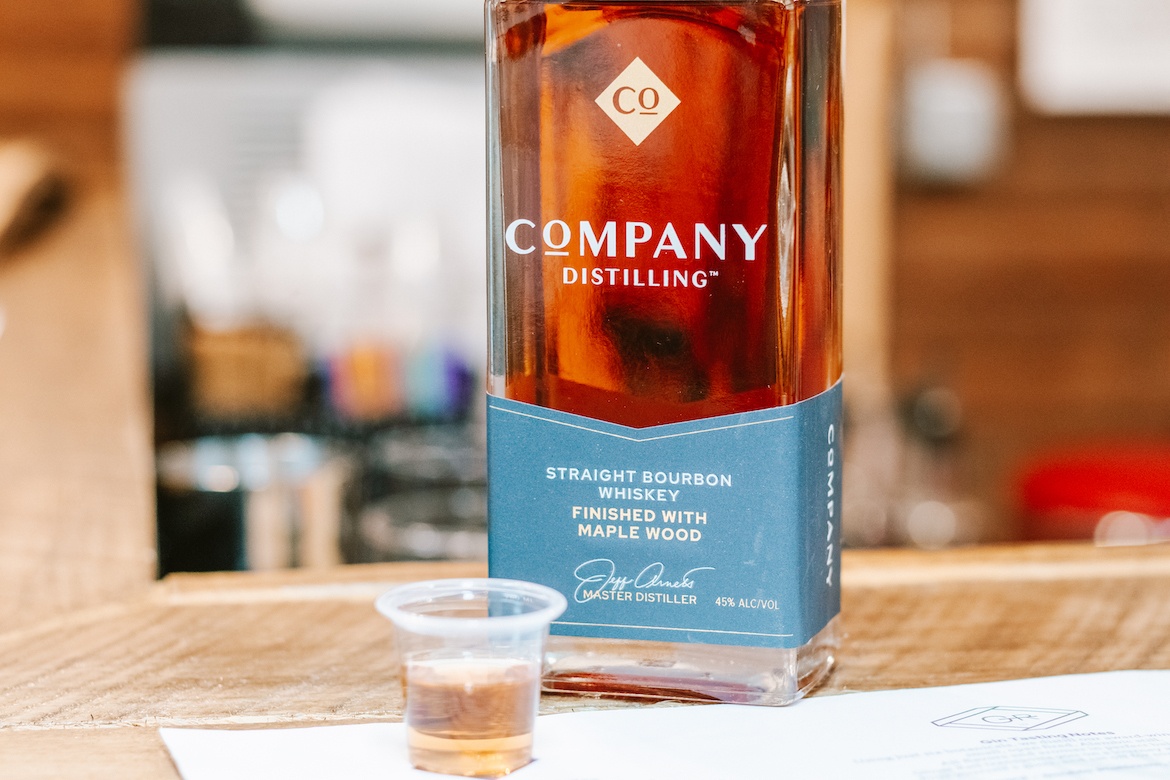 There are daily tours of the small operations area where staff explain how the grains, malts and botanicals like juniper berries, citrus and coriander are used to make the spirits, followed by the opportunity to sip them at the adjacent tasting bar.

It was here that I realized as much as I like booze, perhaps drinking the hard stuff straight up before noon was a bit more than even this Alberta-born girl could handle. Like, you wouldn’t even believe the noises I made trying to get the spirits down sans soda. I began to strongly consider smuggling in a bit of a chaser for the next stop. 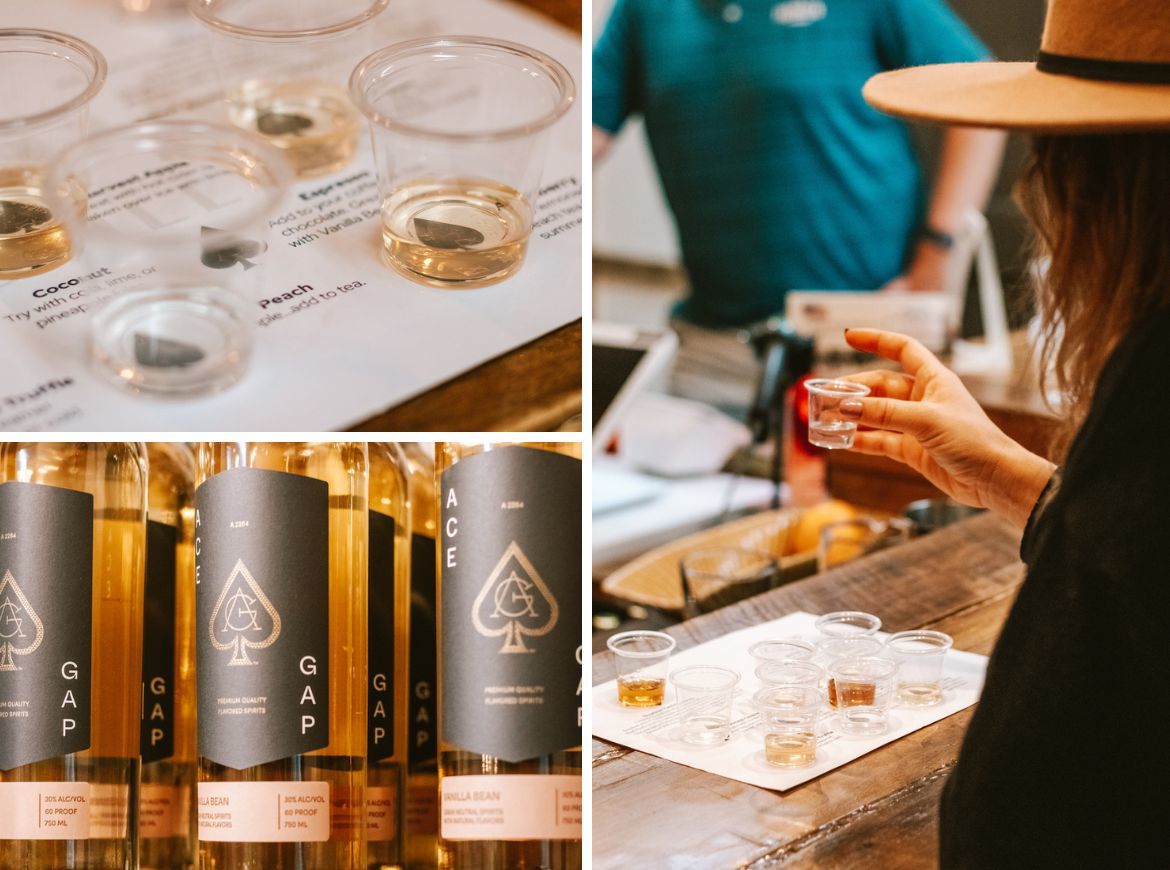 Fortunately, my palate is apparently a quick learner (or maybe the fact that it was now closer to “5 o’clock somewhere” made it a bit easier to drink straight booze), because my next tasting experience at nearby Leiper’s Fork Distillery went a little smoother.

It was clear we were in for an unforgettable experience when we arrived to find a gorgeous log cabin outfitted with twinkling lights, antler chandeliers, stonework and meticulous landscaping, surrounded by green, rolling Tennessee hills. It was like a whiskey wonderland. 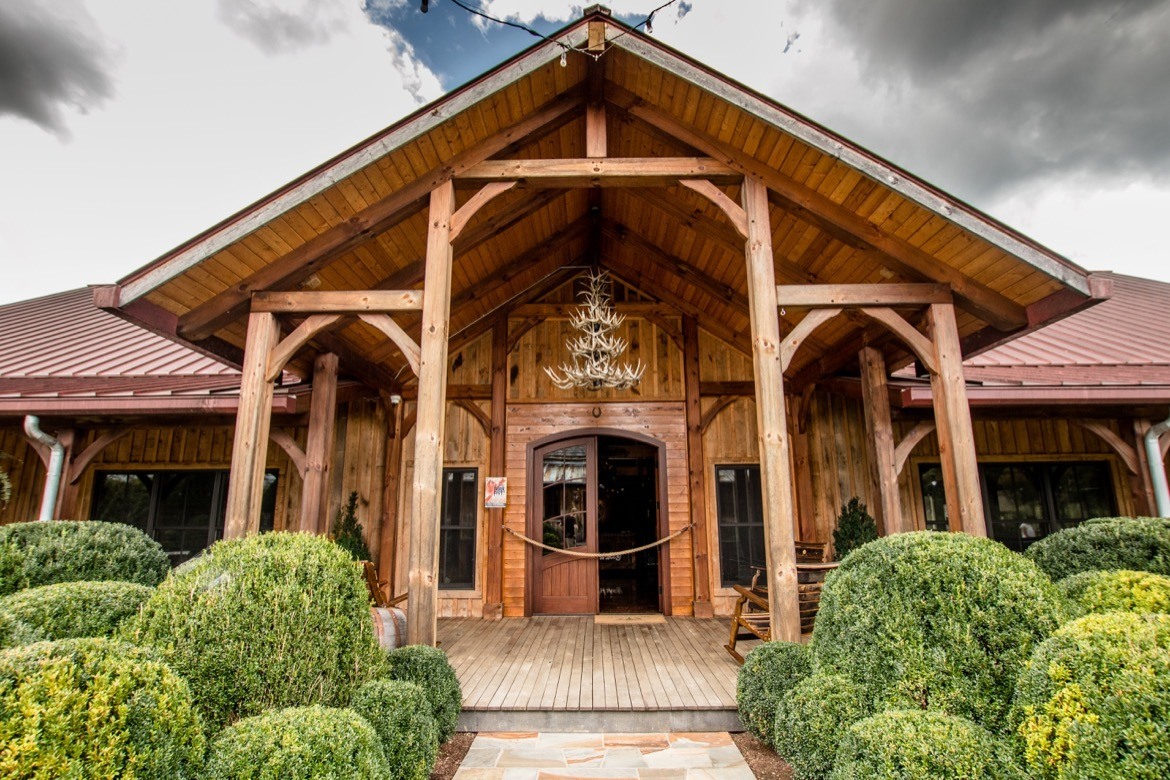 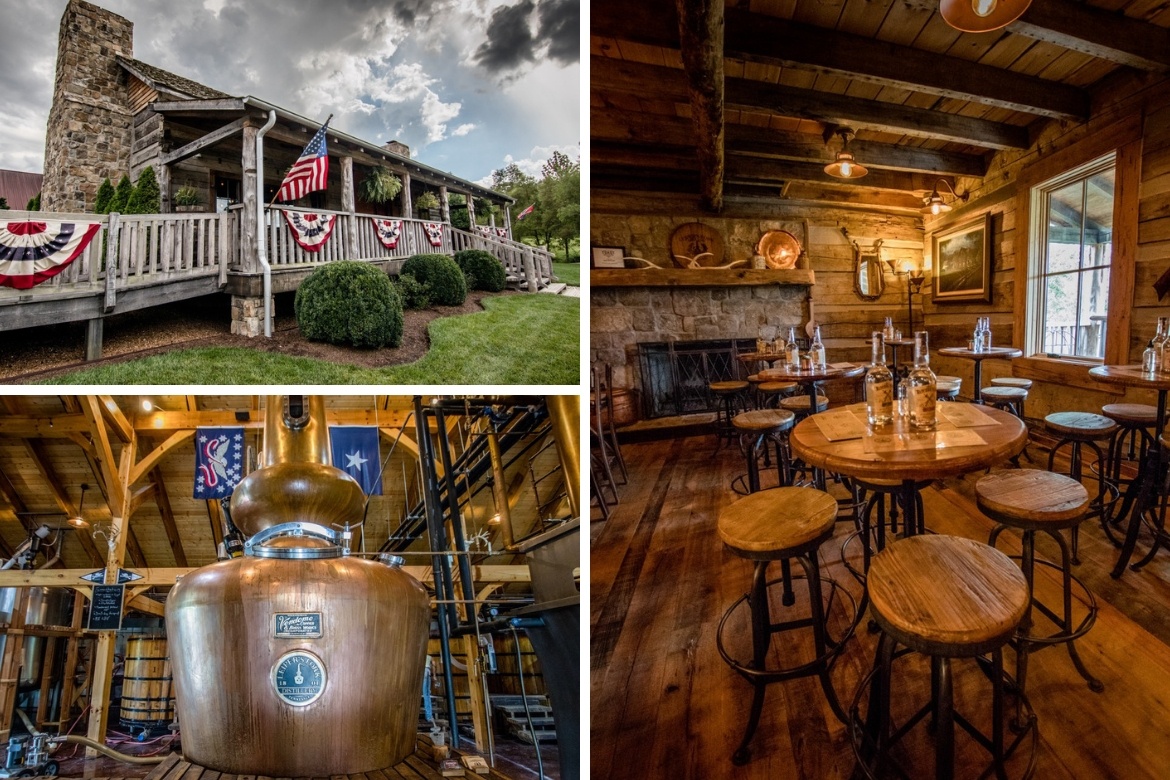 We joined a young Tennessee couple for the site tour, which kicks off at the top of the hour throughout the day. “Y’all are from Canada?” they exclaimed as we set off into the distillery, incredulous someone would travel two-thousand miles just to drink. Clearly they’ve never met a Canadian before, because basically that’s just an average Wednesday where I come from. 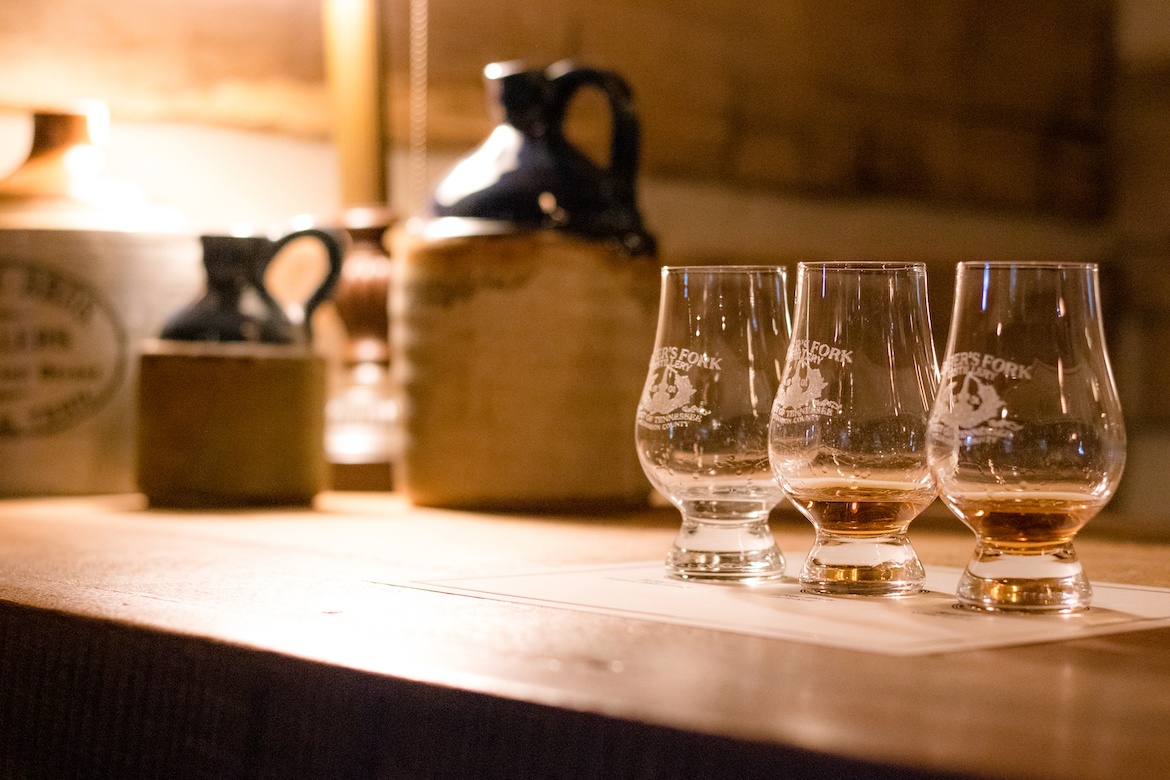 As our guide led us through the production area and expertly explained the process of small batch whiskey making while introducing us to the staff milling about, I couldn’t help but get distracted by how darn beautiful it was. Yes, I just called a liquor production facility beautiful…who even knew that was a thing?

Huge wooden beams framed glistening vats, sunlight streamed through the large windows revealing the serene countryside around us, and a dazzling, multi-tiered chandelier was suspended above it all. Leiper’s Fork Distillery is known for its evening events and jam sessions with famed songwriters, and if this setup was any indication of what those nights are like then they’re definitely something I want an invite to. 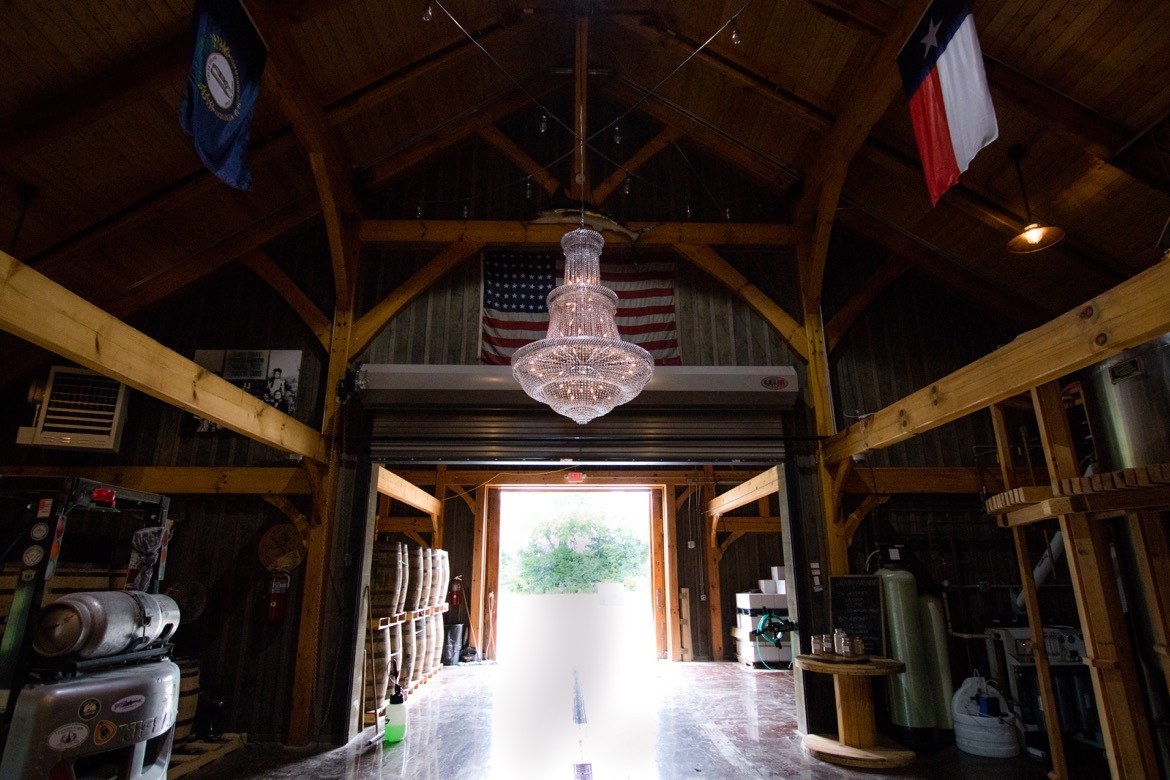 The on-point design scheme continued as we made our way into a separate tasting area about 45 minutes later, where we found a cozy room with exposed beams, a huge stone fireplace and plenty of seating to tuck into bottles of their Old Natchez Trace White Whiskey, rye whiskey and Tennessee select bourbon.

The distillery prides itself on creating high-end spirits with pure limestone filtered water and local ingredients, a nod to the early settlers who brought their stills to the area many generations ago. The drinks went down a bit easier now that I’d had a bit of practice doing that whole shooting-straight-whiskey-shots thing, getting me primed for the next stops on my Tennessee tasting tour. 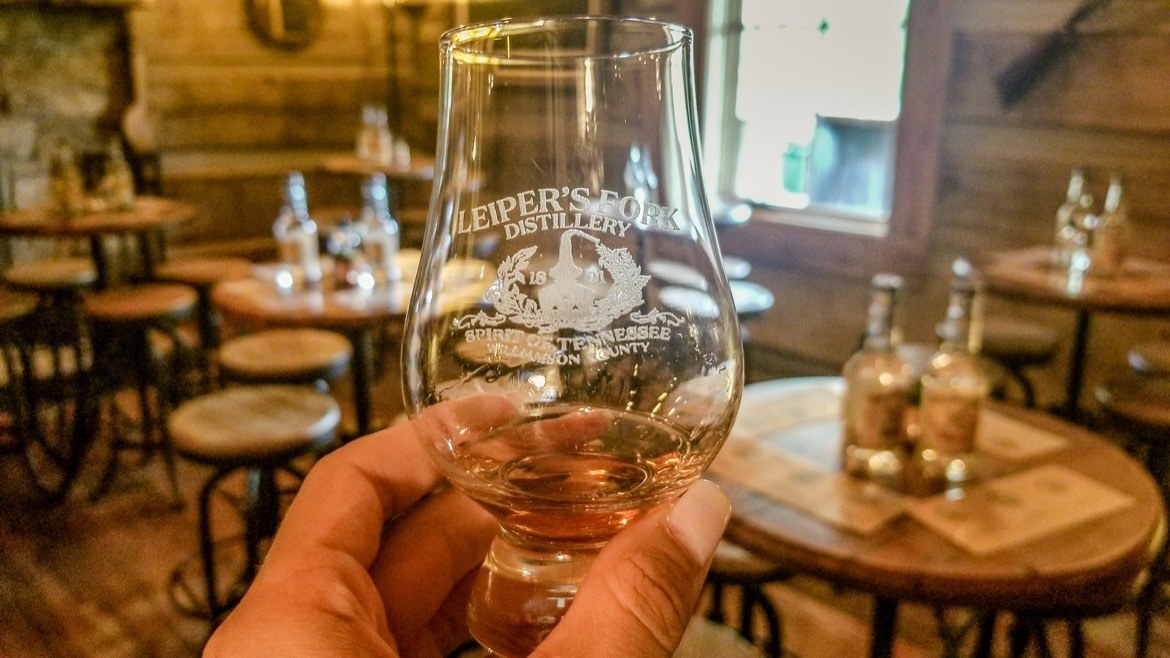 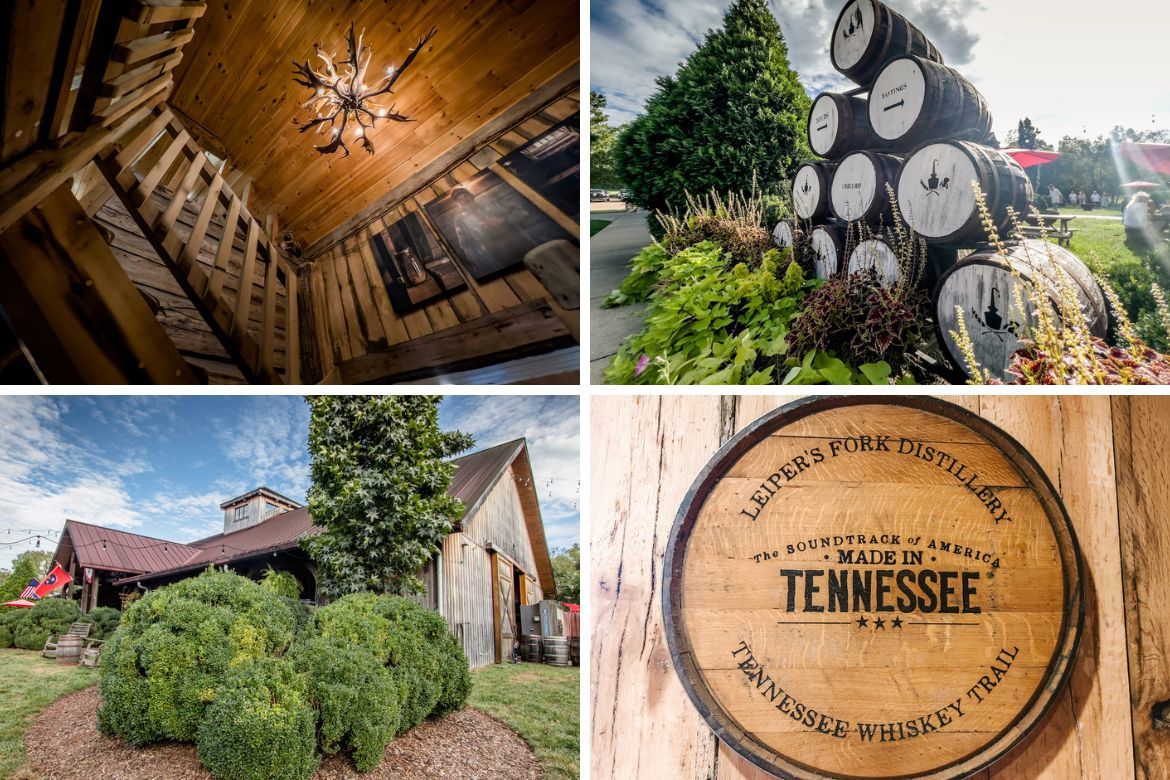 Bright and early the next morning, we headed to a hip hotel to meet the friendly crew from Mint Julep tours, which runs day trips to some of the top distilleries near Nashville. Proving that everyone has a musical connection in this town, our driver mentioned that he’d barely made it in time, since his flight home from chauffeuring Brad Paisley around on tour had been delayed. No big deal.

Our group of a dozen drinkers relaxed into the swanky leather seats in the limo-style bus as we headed out of town, heading down the highway towards the Cascade Hollow Distilling Company in tiny Tullahoma, which makes the renowned George Dickel whiskey. Click here to book 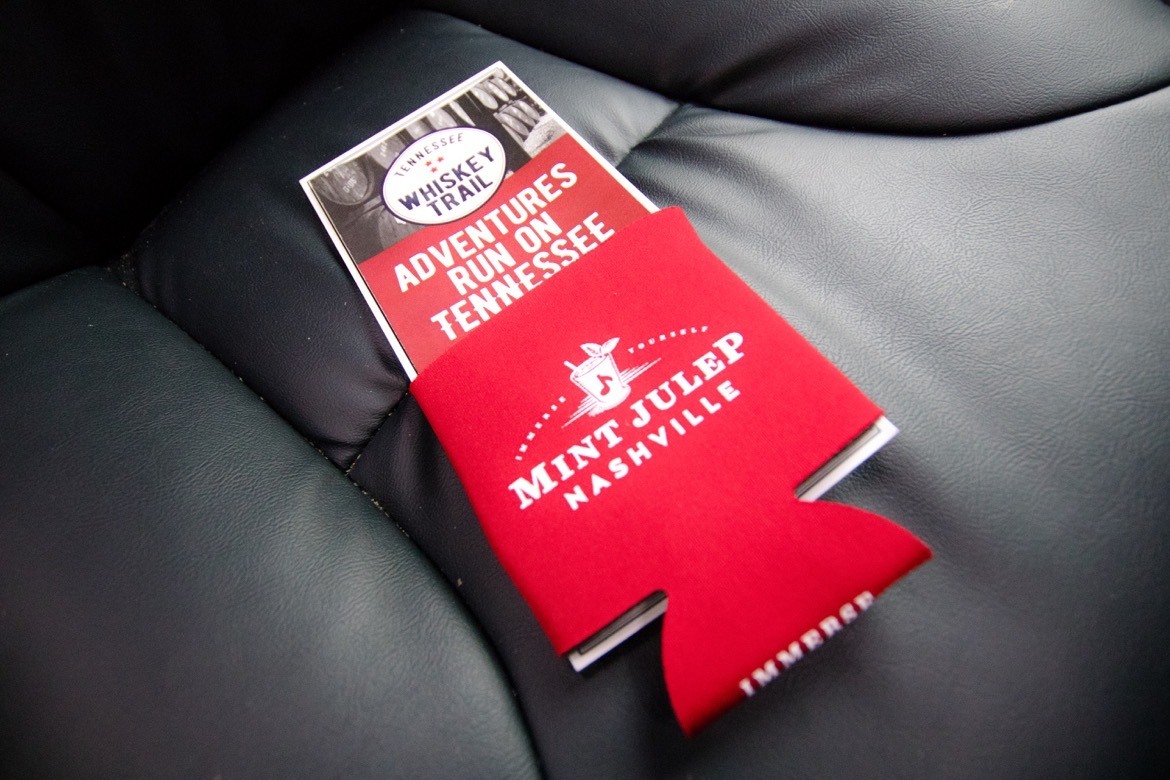 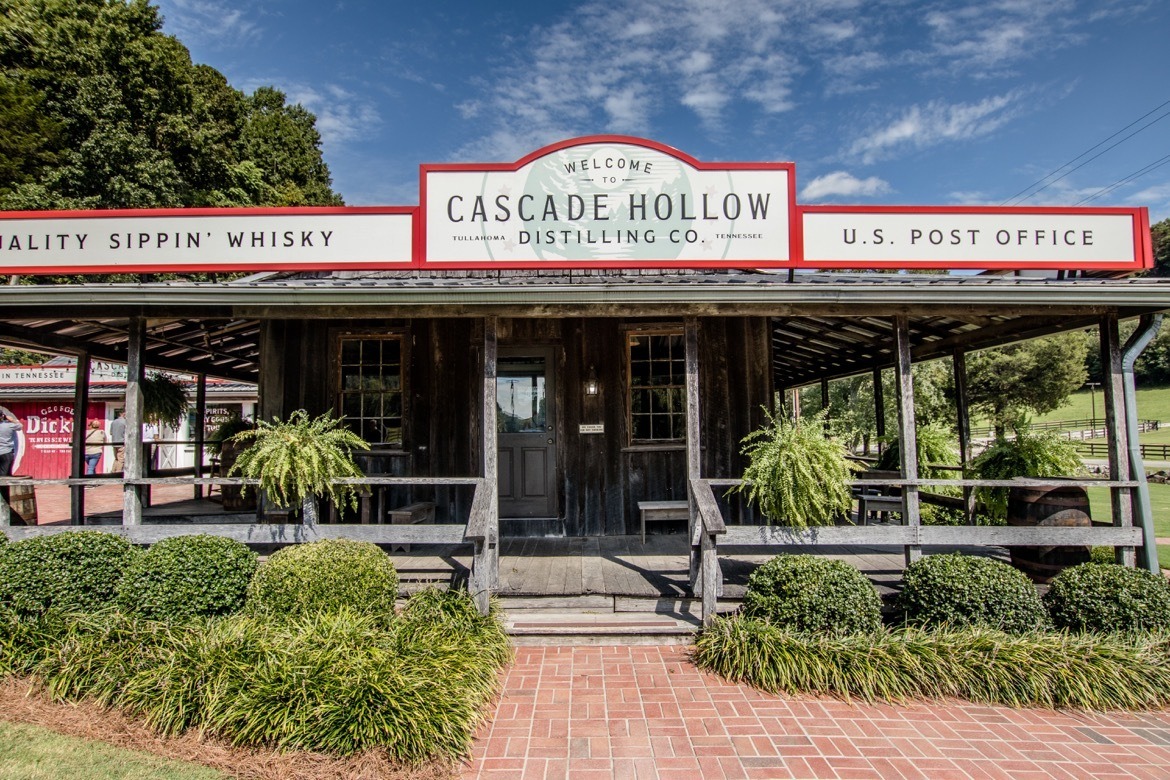 The folks at George Dickel are proud to say that their half-dozen Tennessee whiskeys are “handmade the hard way.” And they mean it; the stream that runs through limestone near the distillery provides the same fresh water for the spirits that was used when it was first built back in 1870, and there seriously wasn’t even a computer here until just a few years ago.

Weighing ingredients is still done manually, and they also take the charcoal mellowing process seriously (which is what differentiates bourbon from Tennessee whiskey), joking that they use Jack Daniels to fuel the fire they burn sugar maple trees in to make the charcoal. 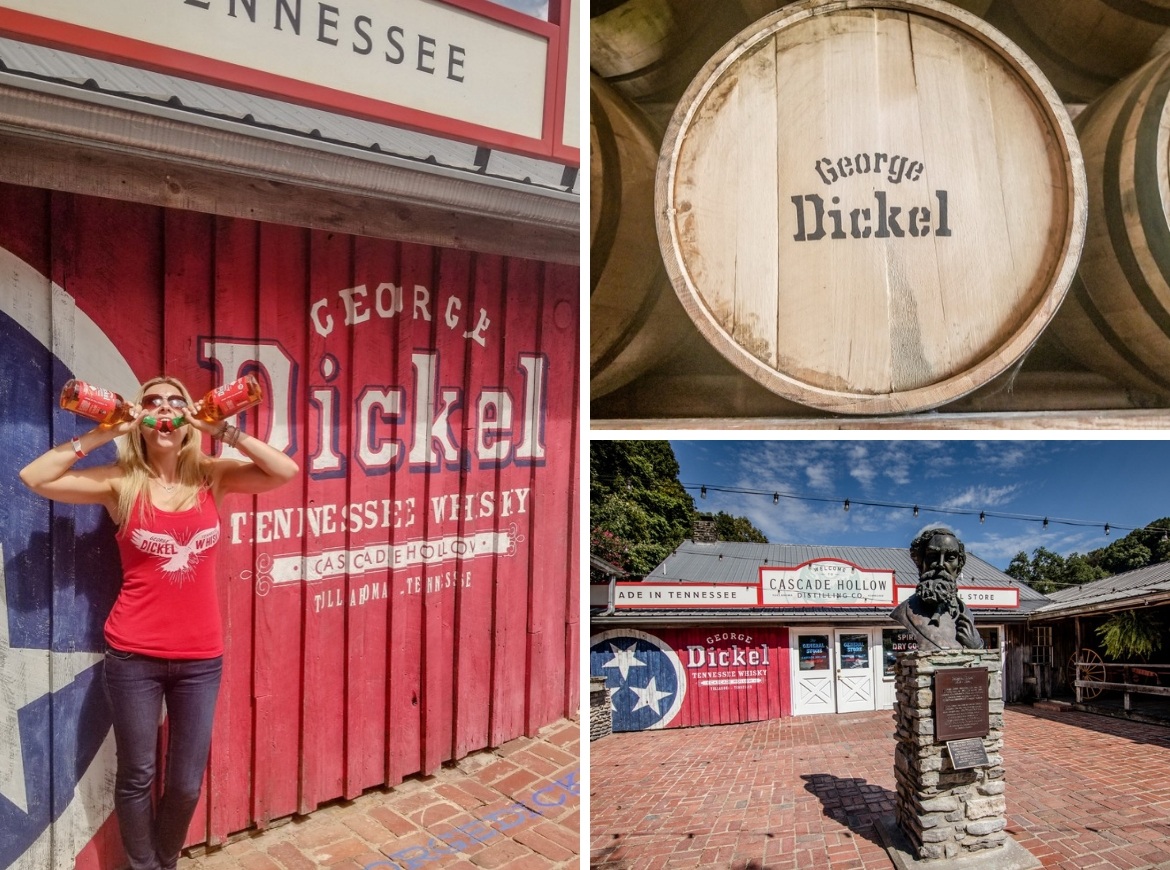 Since I’d already learned enough about the whiskey making process than any human not employed in a distillery should ever know, I’m going to skip over that part of the tour and get to the best part: the tasting.

Our group gathered around a large square bar to find five samples spread out before us, along with tasting notes. Making our way through the assortment of spirits with the help of a whiskey expert (“note the light caramel and wood! A smoky finish with hints of maple and buttered corn!”) we quickly found ourselves at the end of the line, facing quite the foe: the George Dickel Tabasco Brand Barrel Finish.

Yup, this bad boy is aged in the exact same barrels that Tabasco sauce is made in, and let’s just say this is one spicy meatball. And we freaking loved it! Think Fireball mixed with whiskey, which makes it perfect to add into a Caesar or help you forget a bad night. Pretty sure every single one of us bought at least one bottle in the gift shop on the way out. 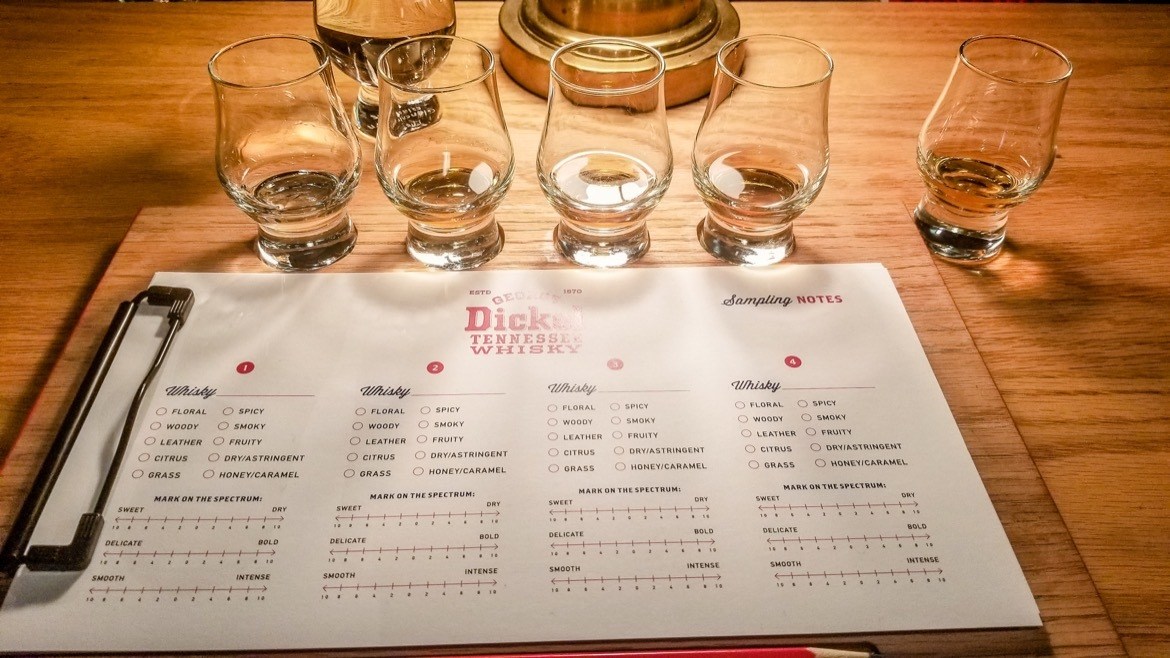 After a quick lunch stop in a nearby town where cafes tout slogans like “A little bit of coffee, a whole lot of Jesus,” we hit the road to Lynchburg and pulled up to the world famous Jack Daniel Distillery. AKA my heaven. The long-awaited moment had arrived, and it was my time to shine. 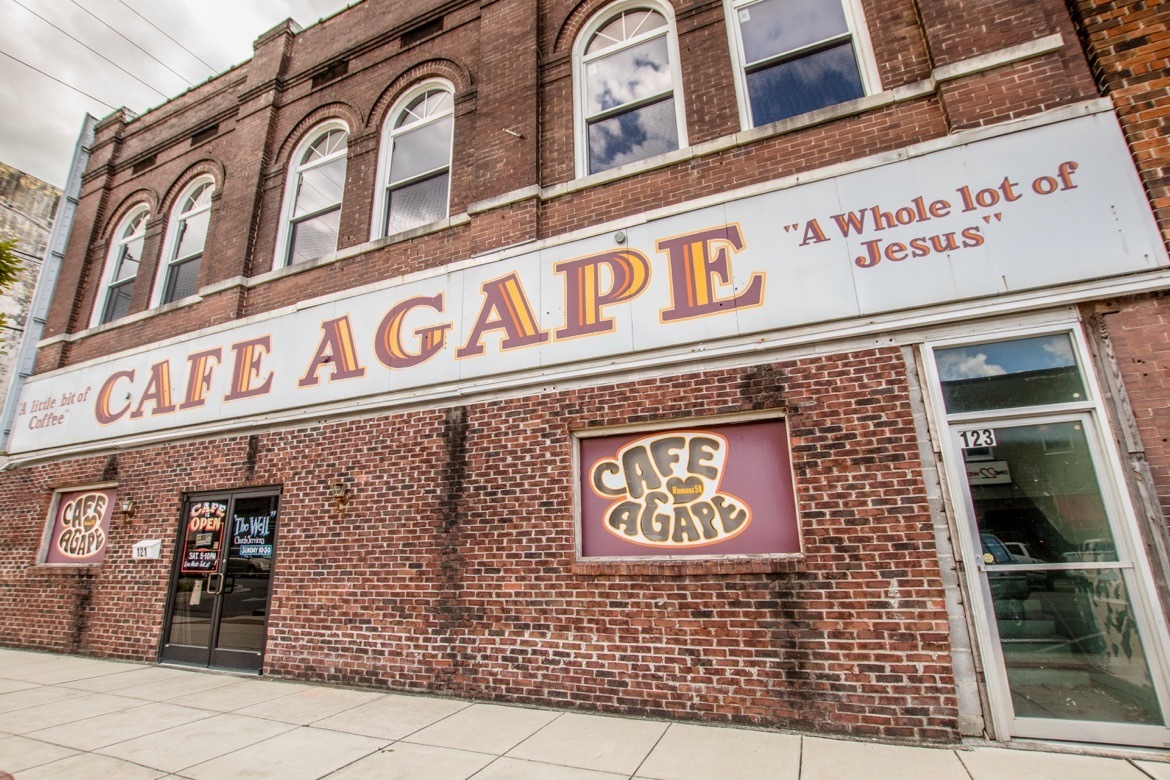 Slipping on my bad-ass JD cowboy hat among a chorus of “hey girl, where’ve you been hiding that thing all day?!” I hopped off the bus and darn-near did a happy dance as I gazed up at the Jack Daniels factory, unable to contain my excitement knowing that just beyond the barn-style doors were barrels and barrels of Tennessee’s finest.

Our group was signed up for the “Angel’s Share” tour, a 90 minute experience where we got to check out JD memorabilia, see the safe that eventually caused Jack’s death (it’s a long story, but in summary you should never kick a big piece of metal—it always wins), and wander through the enormous production facilities. 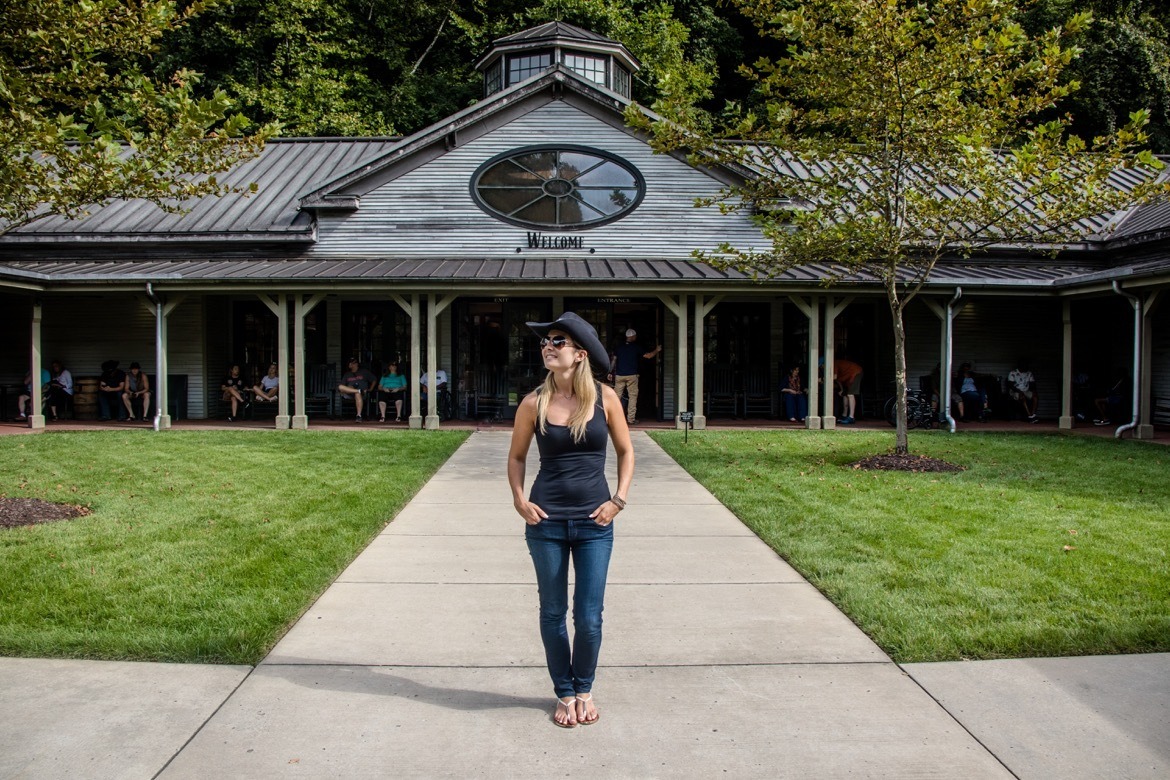 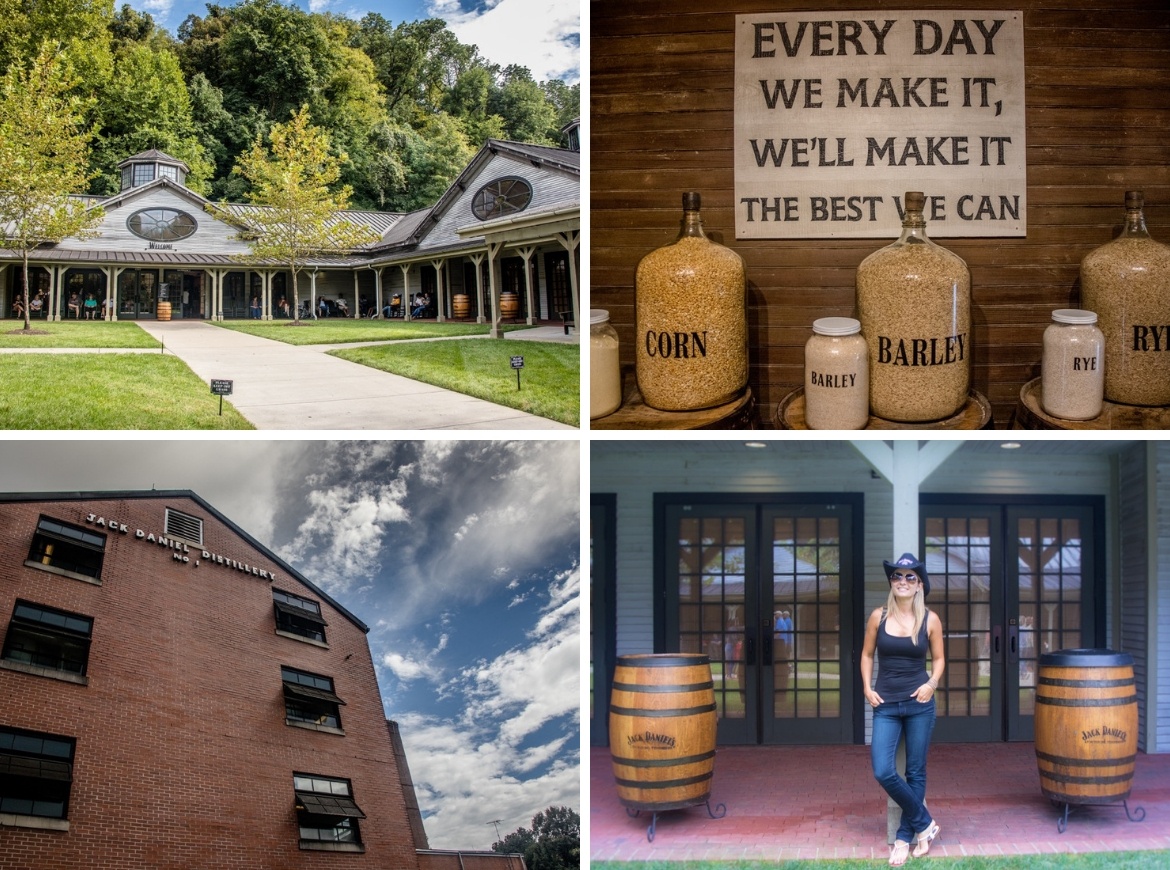 No surprise here: my fave part was the tasting at the end, where we were brought into the beautiful, historic Barrelhouse to sample five of Jack Daniel’s best whiskeys from their Single Barrel collection, including the limited-edition Sinatra. Let’s just say that one goes down smooth, just like its namesake.

My years of training had apparently paid off, and I sipped my way through the lot like a pro without any of the dramatic sound effects and commentary from when I’d tried to do the same a day prior. 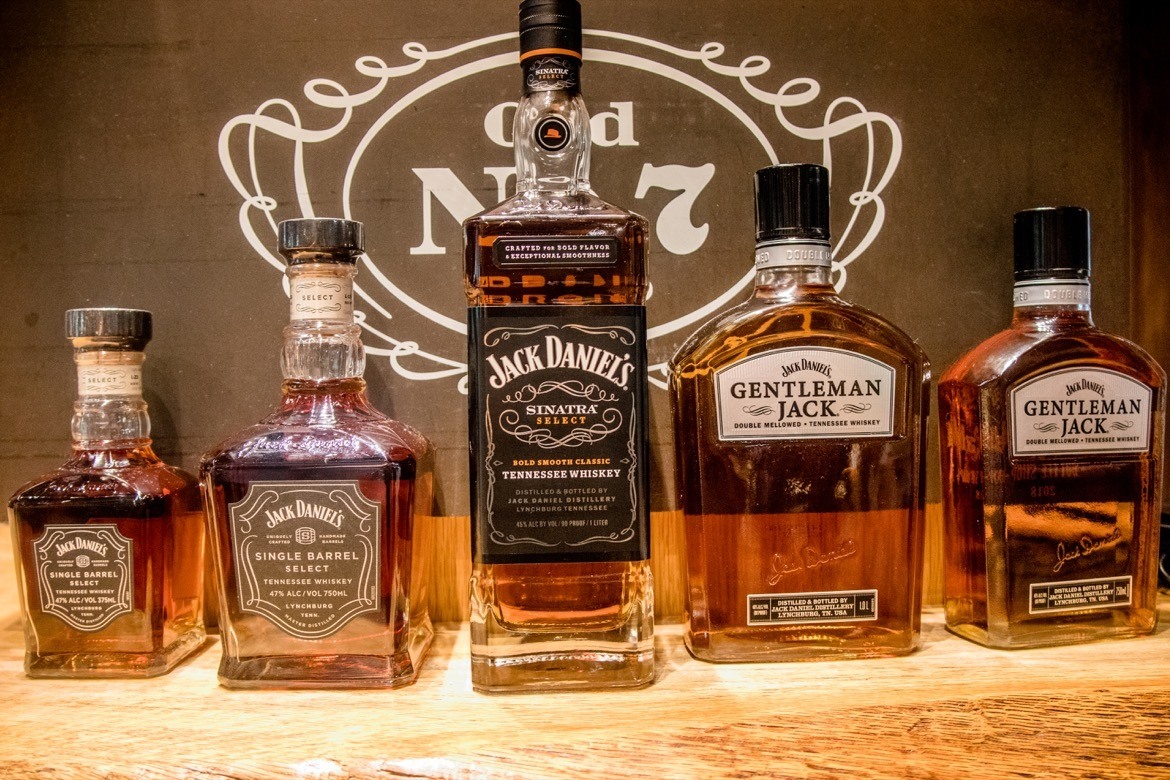 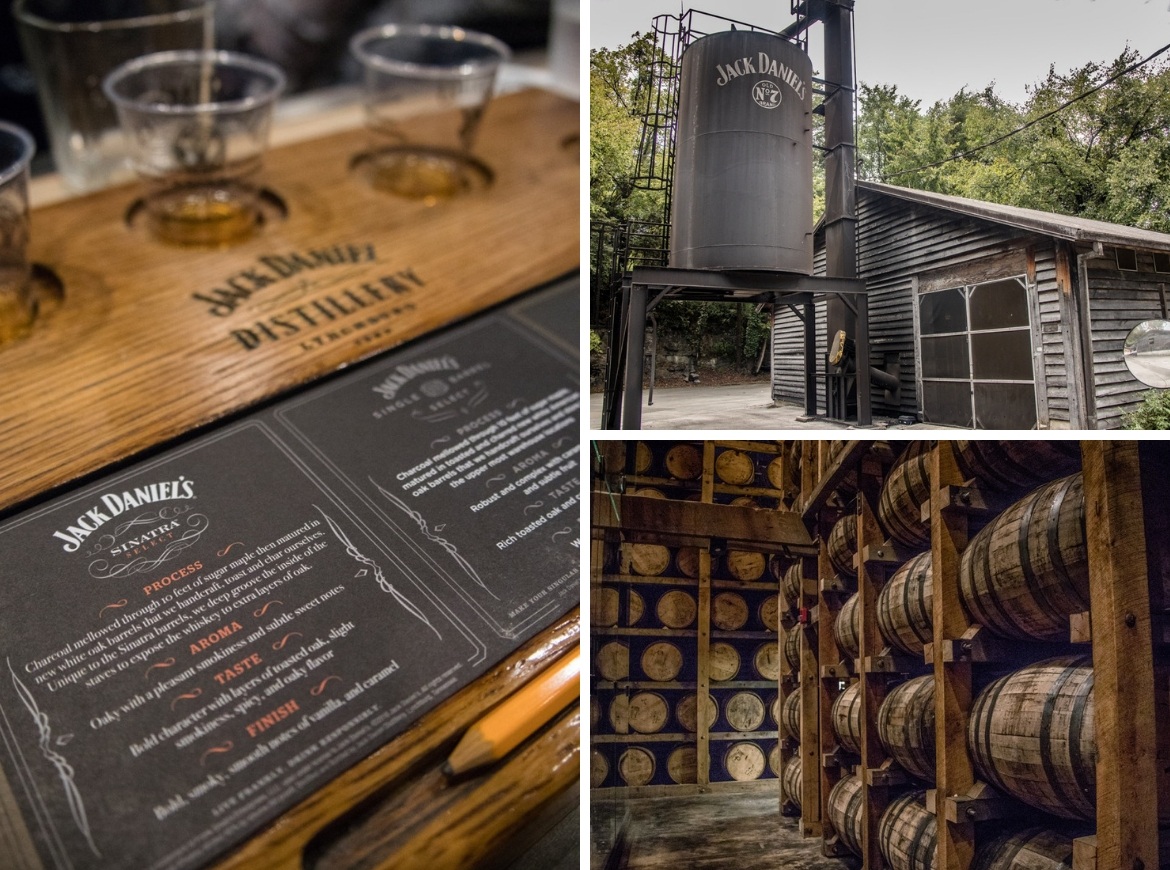 After a quick stop at the nearby Lynchburg Hardware General Store to pick up some official merchandise, our Jack Daniels tour fittingly ended with a visit to Jack’s gravesite, where two chairs sat on either side of his large tombstone to accommodate his many visitors.

With my Jack Daniel’s No. 7 cowboy hat firmly in place, I raised a shot of JD to the legend himself, the perfect way to finish my Tennessee whiskey tour. Click here to book 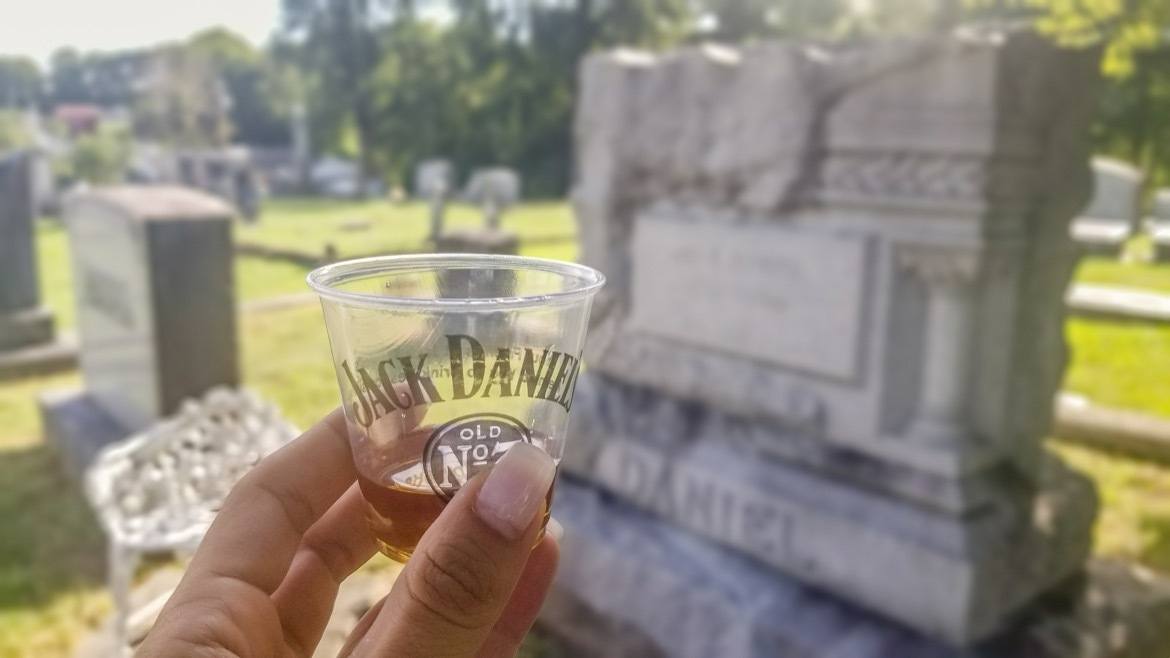 Globe Guide explored the Tennessee distilleries in collaboration with Visit Franklin. As always, hosts have no editorial influence on articles 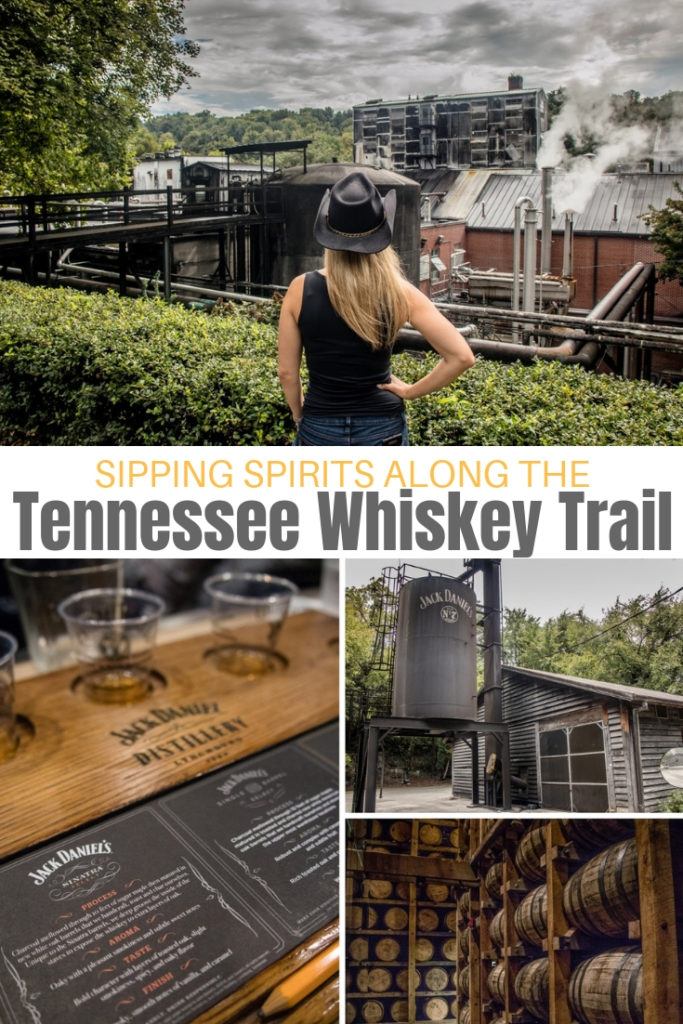 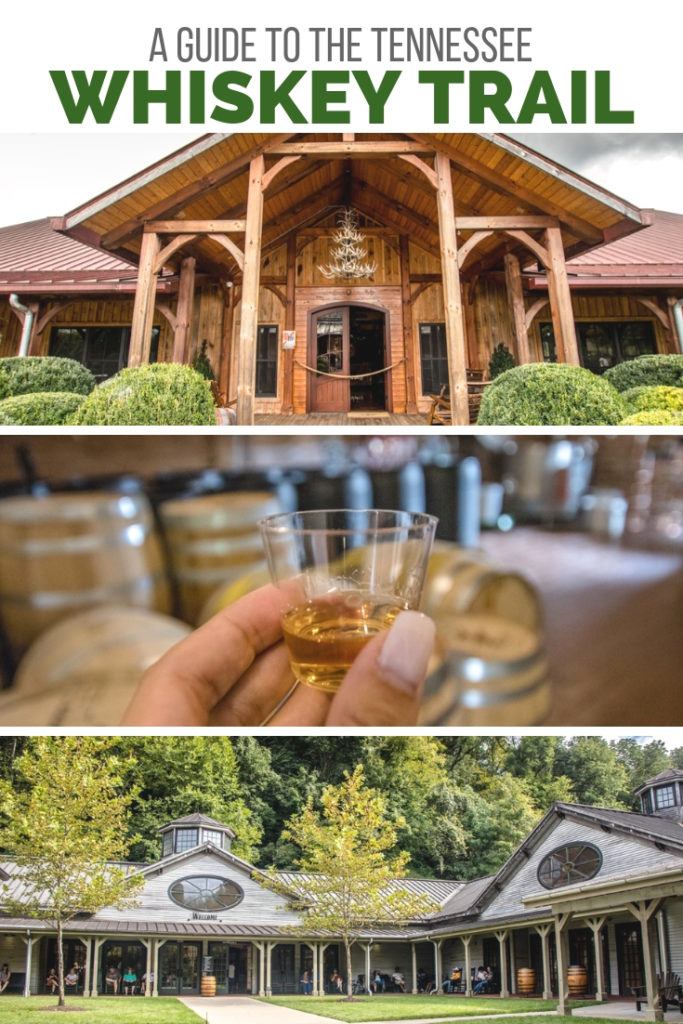 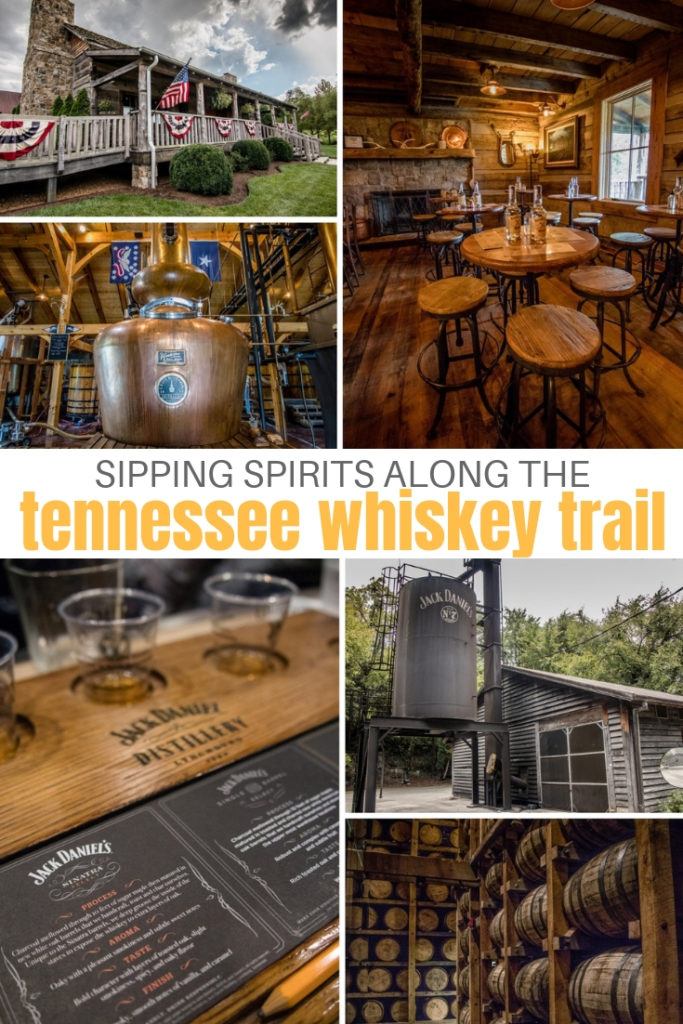