Things to do in Amman, Jordan (before a more epic adventure) 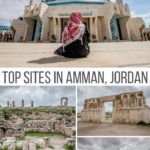 It might come as a surprise that many travellers land at the airport in Amman, Jordan, then make a beeline straight out of town for iconic sites like the Dead Sea or the world wonder Petra.

After all, Amman is the capital city that’s home to four million people, and the kind of place where modern skyscrapers are surrounded by crumbling ruins and relics dating back to the Stone Age (seriously), so one would think there’d be plenty of spots worth exploring, non? 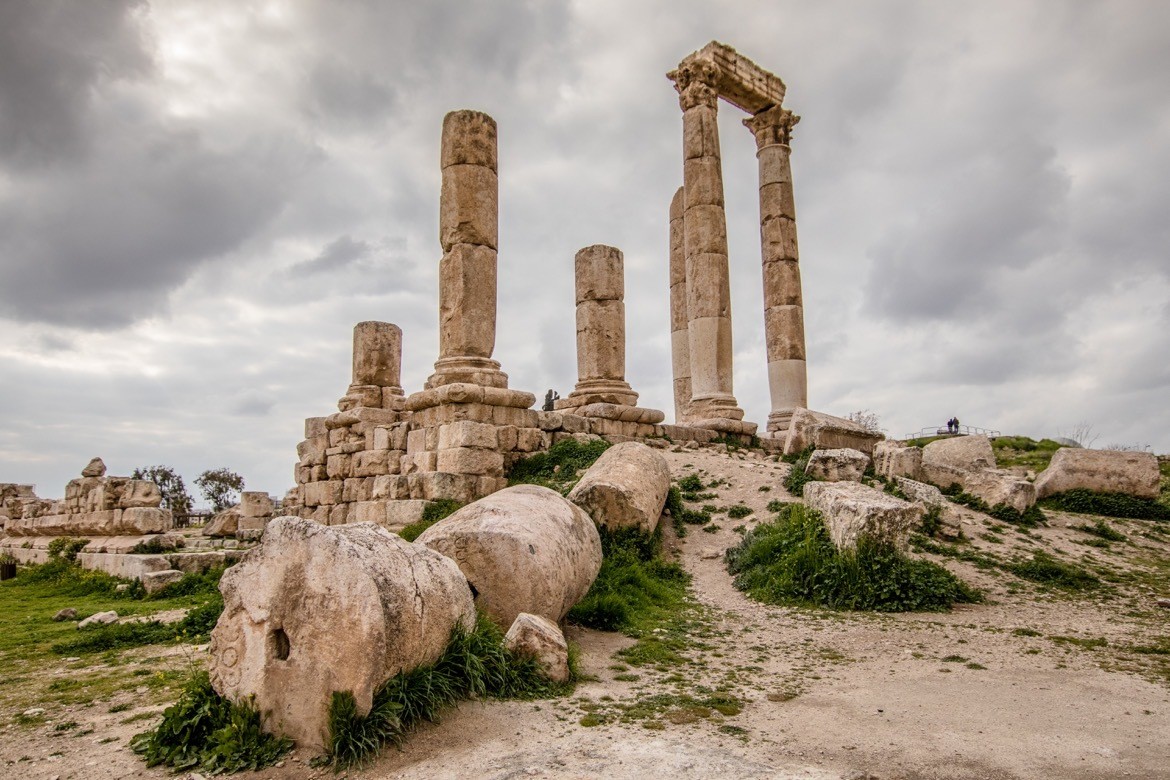 See, that’s the thing. Despite being such a sprawling city, Amman really only has a handful of sites worth exploring, which are quite spread out geographically and by no means easy to get to. Traffic congestion can be brutal, bicycles are non-existent, and let’s just say if you happen to come across a sidewalk chances are it looks like it dates back to the days of the Neolithics.

However, there are few gems worth checking out if you’re looking for things to do in Amman, which are most easily experienced as part of an organized day tour with a dedicated guide and driver. It’s also possible to explore the city through a combination of lots of walking and cabs–just be sure to get into a metered taxi or agree on a price beforehand so you don’t get seriously overcharged, which is unfortunately quite common here.

With all that in mind, here’s where to go in Amman if you have a day to explore. 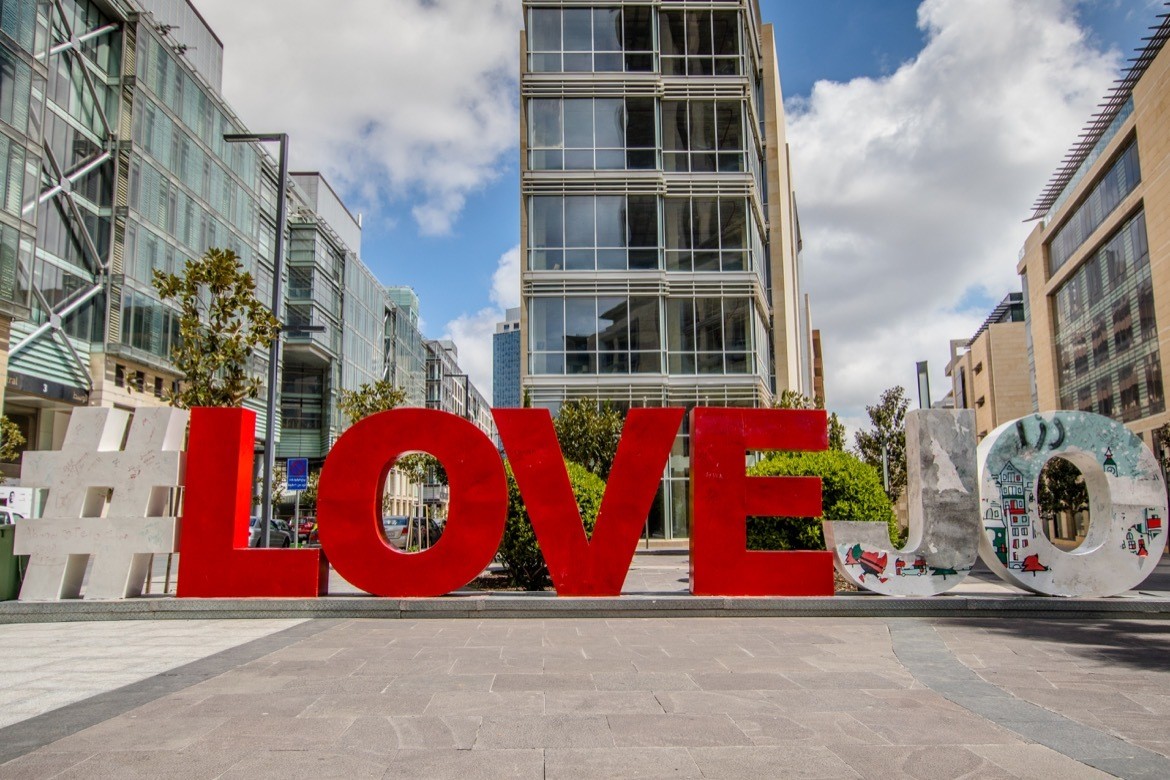 If you only see only one thing in Amman, make sure it’s the Citadel. Perched high on Jabal al-Qal’a which is the highest of the city’s seven hills, this is hands-down the best view in the Amman and one of the most photogenic spots, found only a 10 minute walk from the main downtown streets. 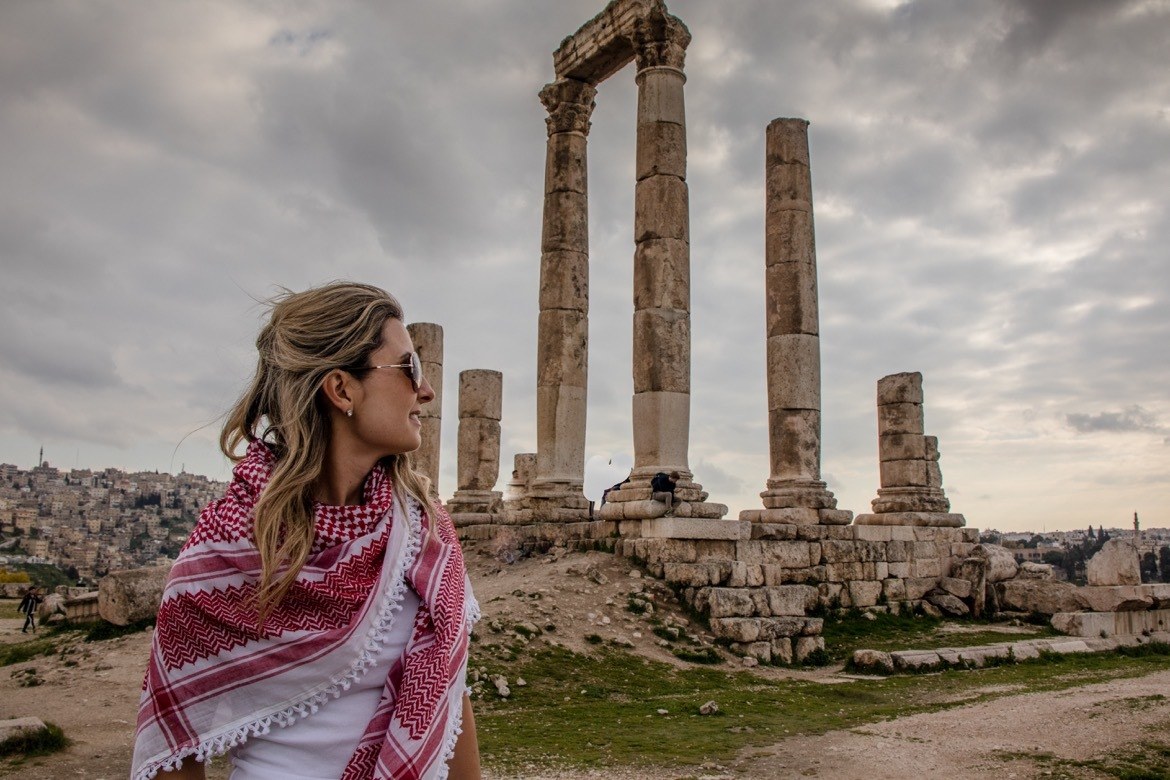 Dating back to the Bronze Age (circa 1600 BC–let that sink in for a minute!), the fortification was occupied and rebuilt in the subsequent Roman, Byzantine and Umayyad eras, the result being additions like the Ayyubid Watch Tower which guards used to protect the city below, the Umayyad Palace with its intricate wall carvings, and the Byzantine Church (550 AD) which features a now-protected mosaic floor. 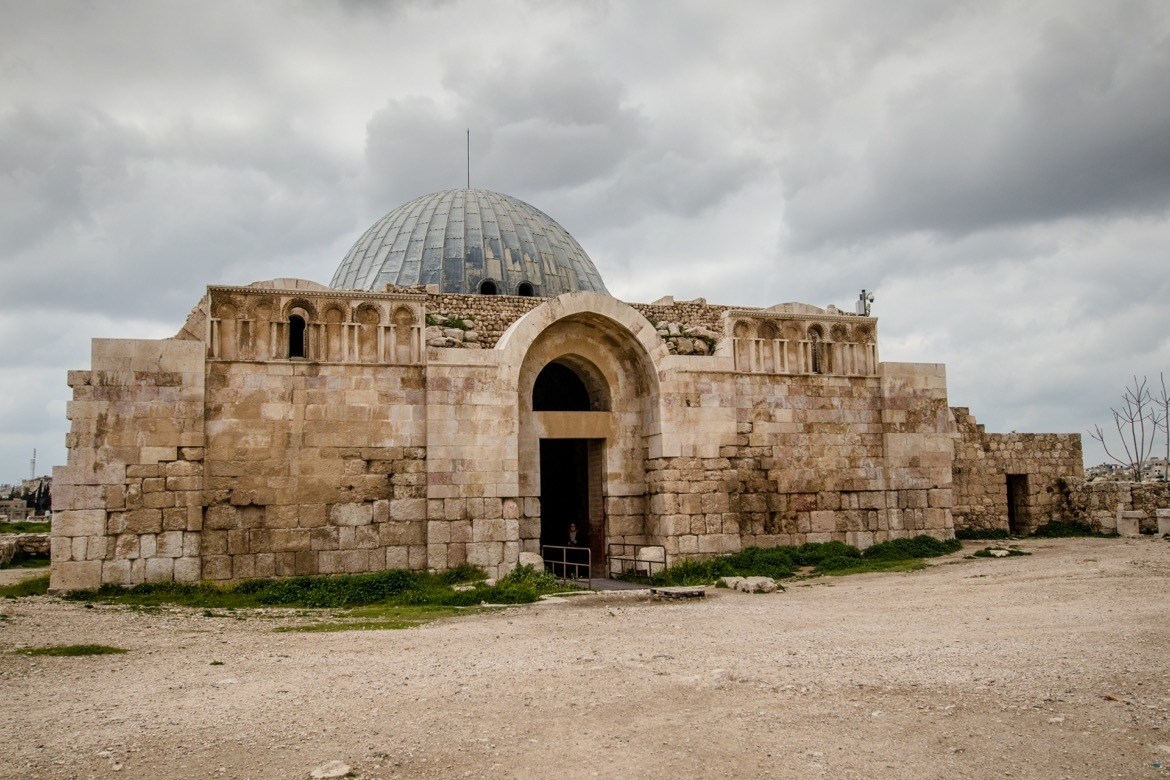 The site’s crown jewel is the Temple of Hercules (161 AD), believed to have been dedicated to the Roman hero due to the discovery of gigantic arms. Today, one of the original statue’s massive marble hands remains, as well as 30-foot high pillars and inscriptions. 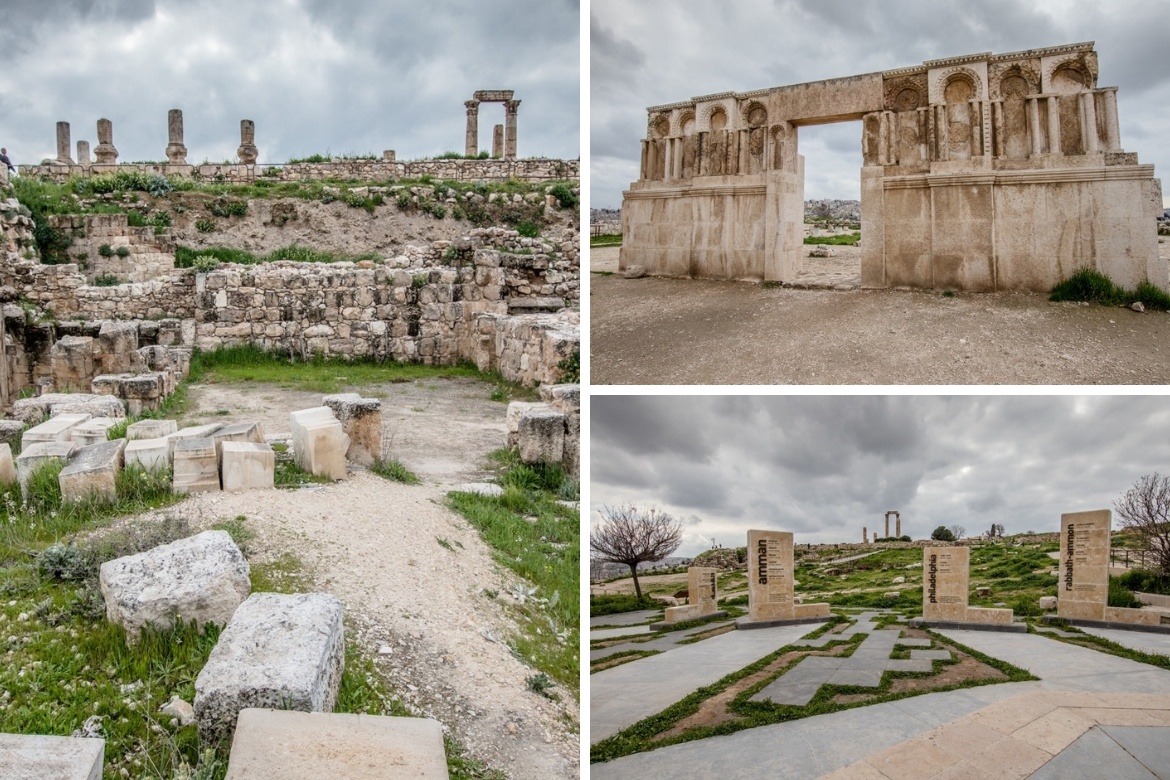 There’s no question the Citadel is mecca for history buffs, but even non-museum types are sure to enjoy this spot thanks to the spectacular views, making it one of the top Amman attractions.

Insider tip: Try to time your visit for late afternoon, to see the site and city during the enchanting golden hour leading into sunset. There’s also a call to prayer around 3 pm, and the Citadel is an absolutely captivating place to experience the haunting sound.

Just down the hill from the Citadel is the Roman Theatre, an amphitheatre tucked into the hillside which dates back to the 2nd century and can seat an astounding 6,000 spectators on its steep stairs. Remarkably well preserved, it also houses the Jordan Museum of Popular Traditions and the Jordan Folklore Museum. Truth be told you don’t really need to visit the site since there’s a great view of it from the Citadel, but if you do end up visiting be sure to track down the small marking between the seats and stage; if you make a noise in this spot, it will project out to the entire stadium in a rather impressive show of acoustic engineering. 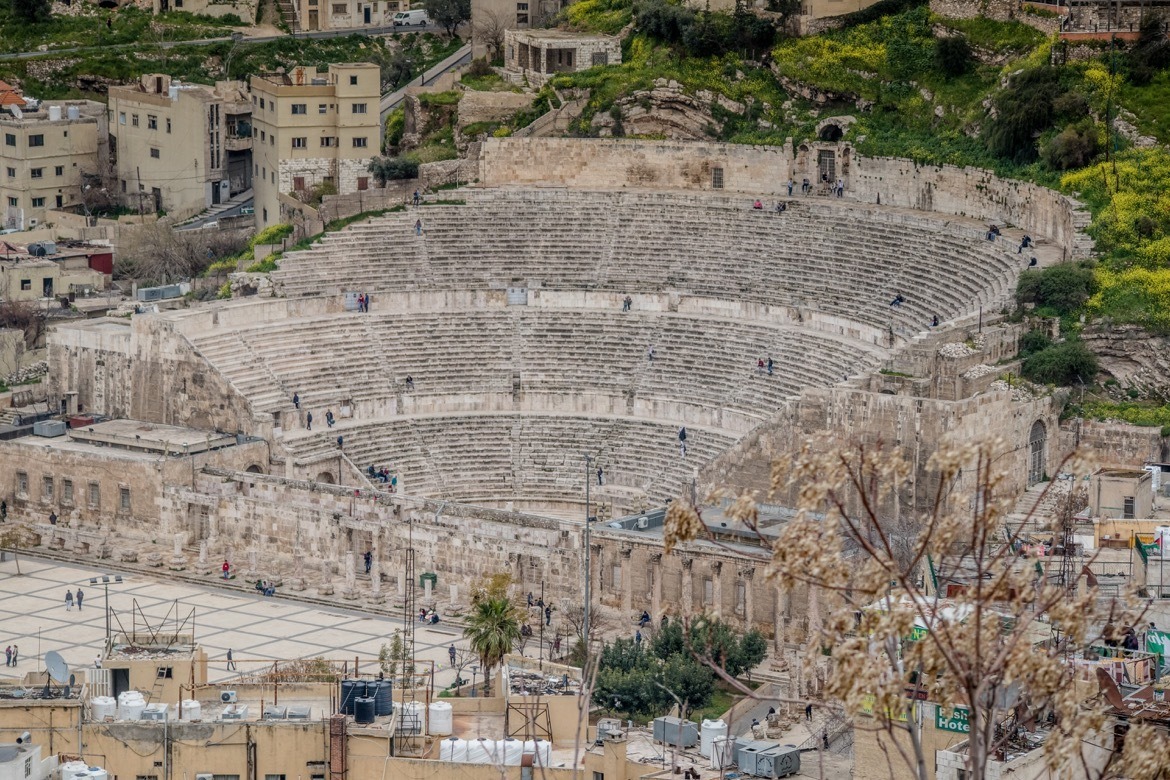 The attractive King Abdullah I Mosque is one of the top places to visit in Amman, drawing in visitors with its intricate bluebird-hued mosaic tiled roof, Quranic inscriptions and dazzling white minarets that soar into the sky. The mosque was built in 1989 as a memorial to King Hussein’s grandfather, and is unique in that it’s open to non-Muslim visitors.

The enchanting call to prayer welcomes worshipers throughout the day, and outside of prayer times travellers can explore the site and tour the grand interior which holds about 7,000 people. 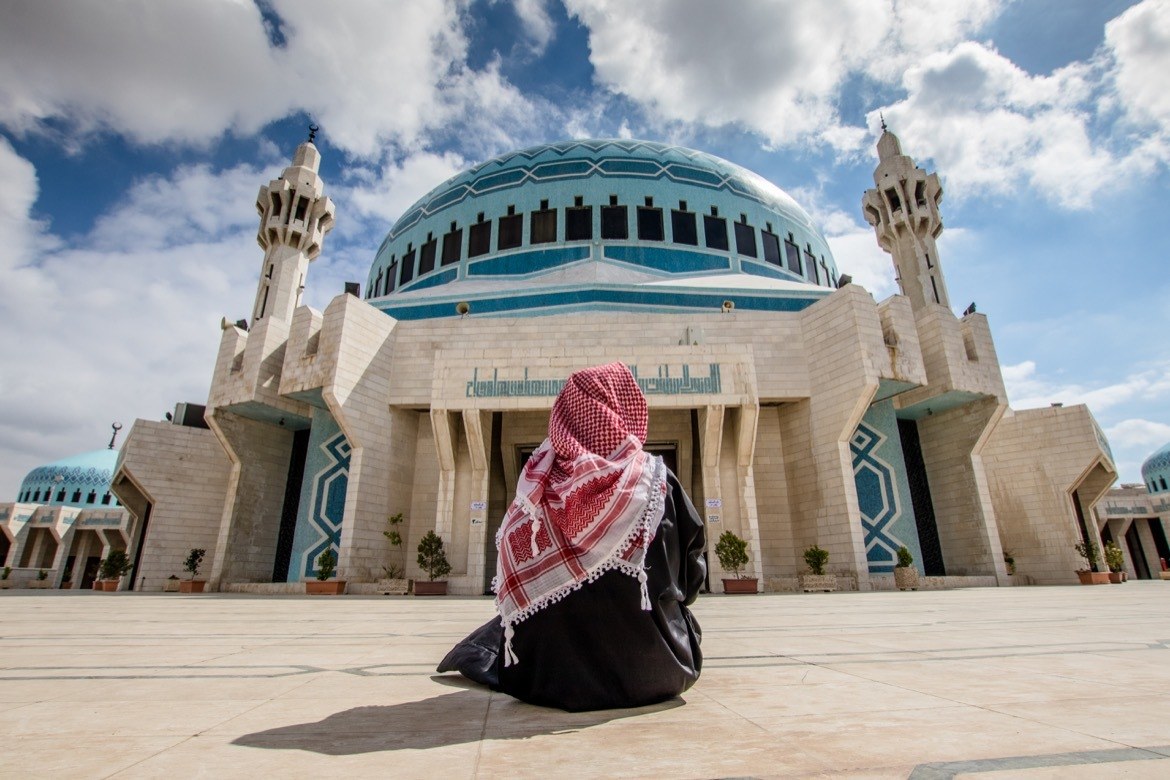 To enter, purchase a ticket from the gift shop found to the right of the front staircase, which also lends out long abayas (a robe) to ensure visitors are properly covered. It only takes about 15 minutes to see the mosque, but you’ll likely want to spend additional time in the shop which has half a dozen rooms overflowing with Jordanian wares like beauty products made with minerals from the Dead Sea, handicrafts and jewellery.

This is also a great spot to purchase the country’s official scarf, and staff will be sure to give you a demonstration on how to tie it while you tuck into the free tea and sesame pistachio cookies they give each visitor. 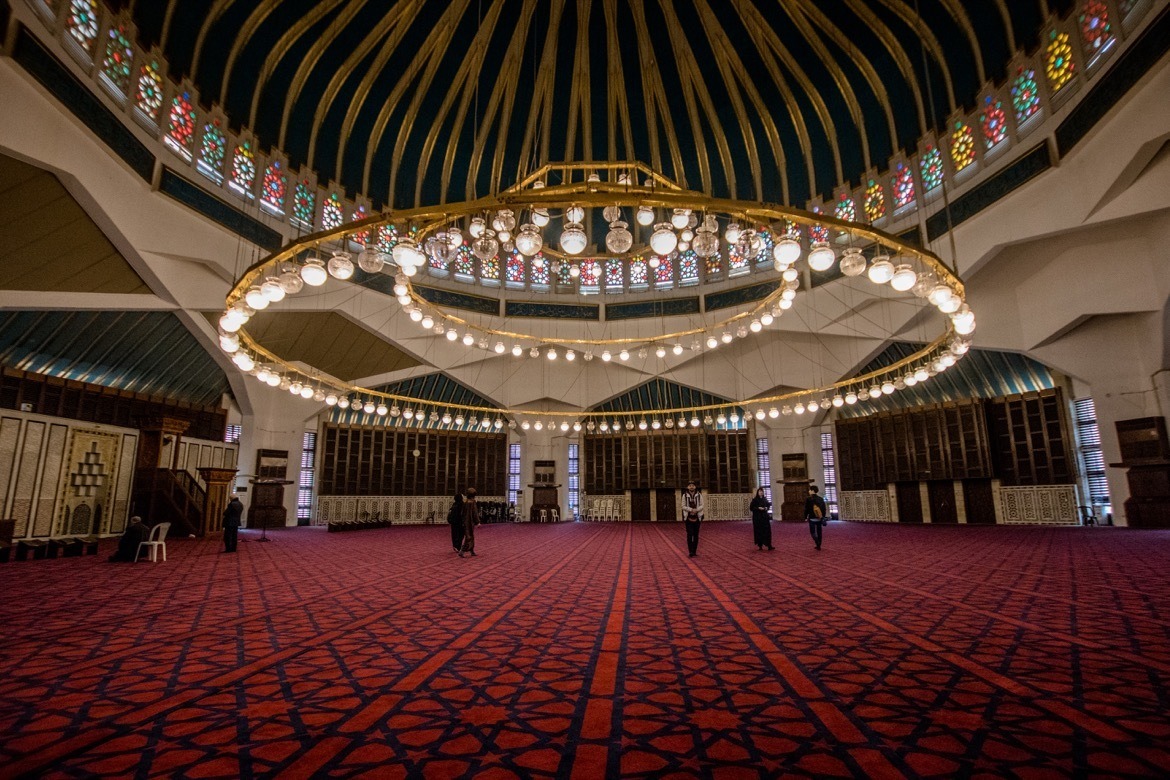 Inside the King Abdullah I Mosque 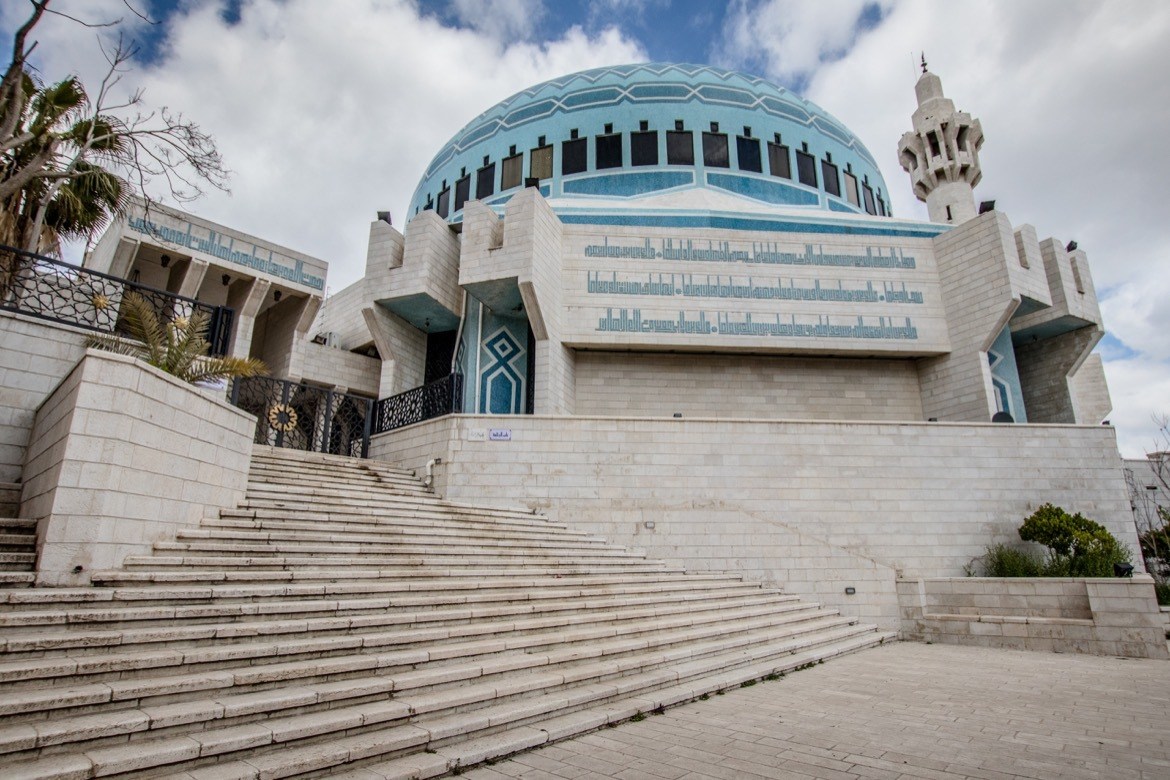 Entering Amman’s bustling downtown core feels a world away from serene spots like the Amman Citadel, or even the streets just off the main strip.

Picture four lanes of honking traffic where pedestrians dart between moving vehicles (because no crosswalks), shopkeepers shouting out as they hawk their wares, Arabic music blasting through loudspeakers, and souks overflowing with goods like flashy jewellery, perfumeries, traditional beaded dresses, fresh baking and brightly-coloured scarves. 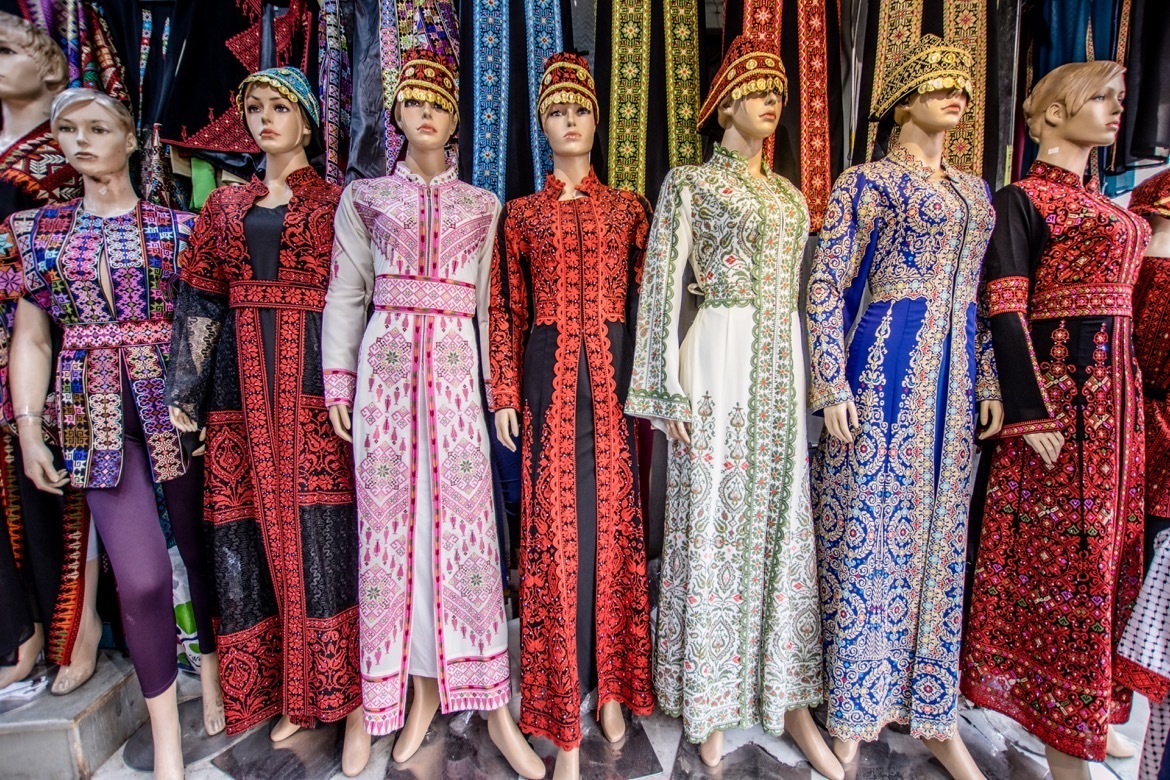 Despite the chaos, walking through Al-Balad is a must-do on every Amman sightseeing itinerary, as it’s one of the best places to get a feel for daily life in the capital and is the central hub of activity. Visitors can expect to pick up souvenirs for less than they would elsewhere in the city in this traditional market area–and be sure to keep in mind that bargaining is a common practice. 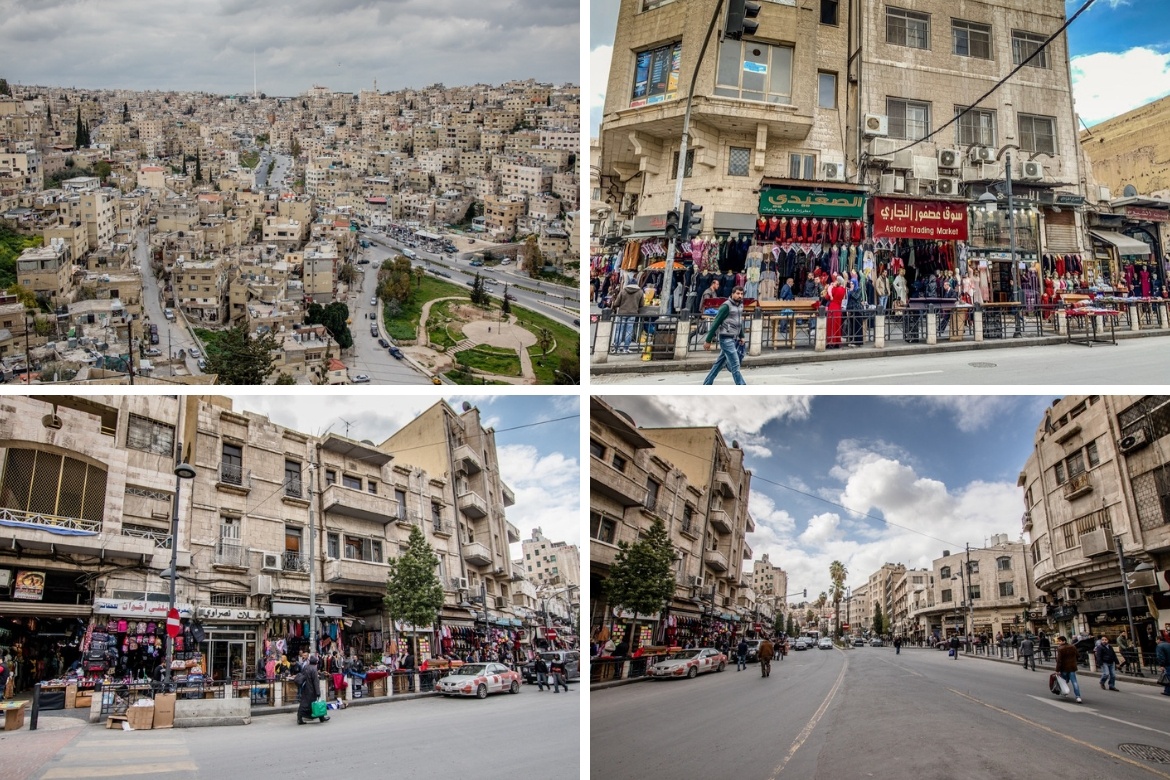 Insider tip: There’s allegedly a cute umbrella installation on King Faisal Street, but I walked up and down that stretch and couldn’t find it (my subsequent Internet sleuthing only uncovered a few mentions–and you just KNOW the Instagrammers would be all over that if it were actually a thing), so if you’re up for an Amazing Race-style challenge try and seek that one out. 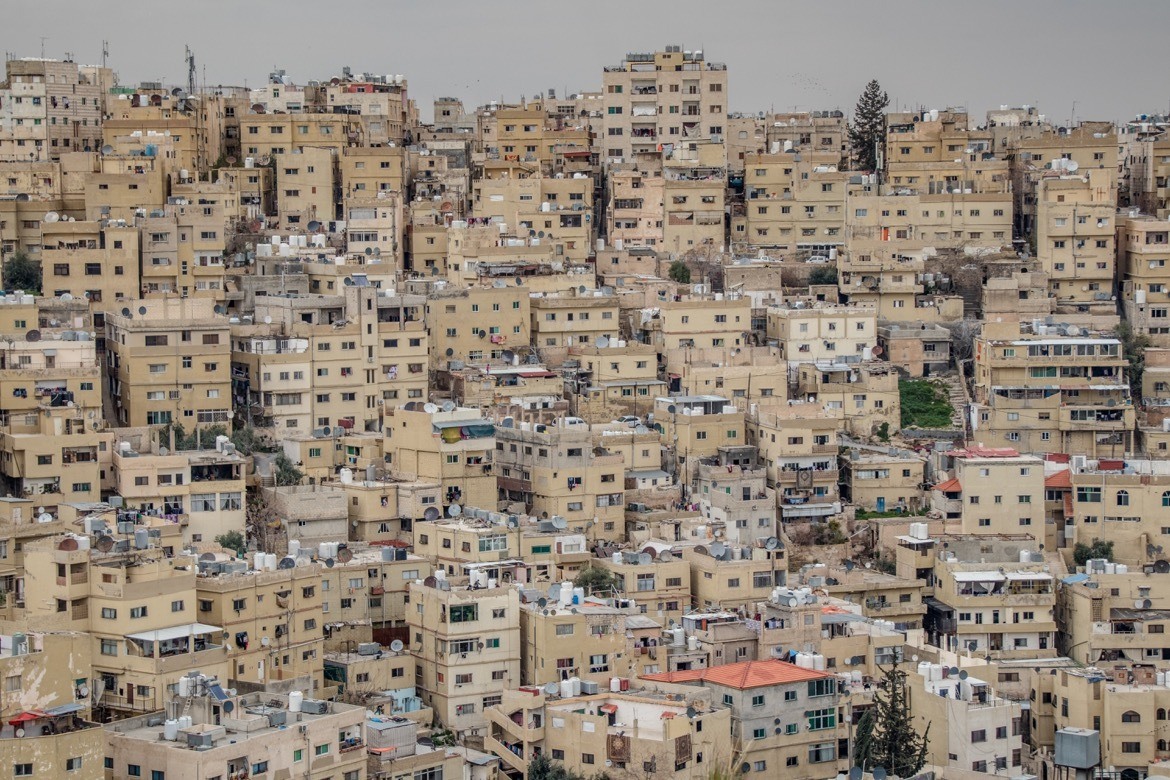 This district near downtown shows up in a lot of guidebooks…and I’m not totally sure why. Often touted as a lively, trendy shopping area full of great cafes and restaurants, there was hardly a soul in sight when I visited mid-afternoon on a sunny spring day. Considering it’s named after a rainbow one would assume it would be photo heaven–instead, it actually consists of a long row of plain, sandstone buildings with the only pops of colour being a handful of storefronts that went out of their way to get artsy with their facades.

I legit didn’t even bother taking my DSLR camera out of my bag during this stop, though there are some half-decent city views. Oh, but apparently some of the best falafels in the city are found here, so there’s that. 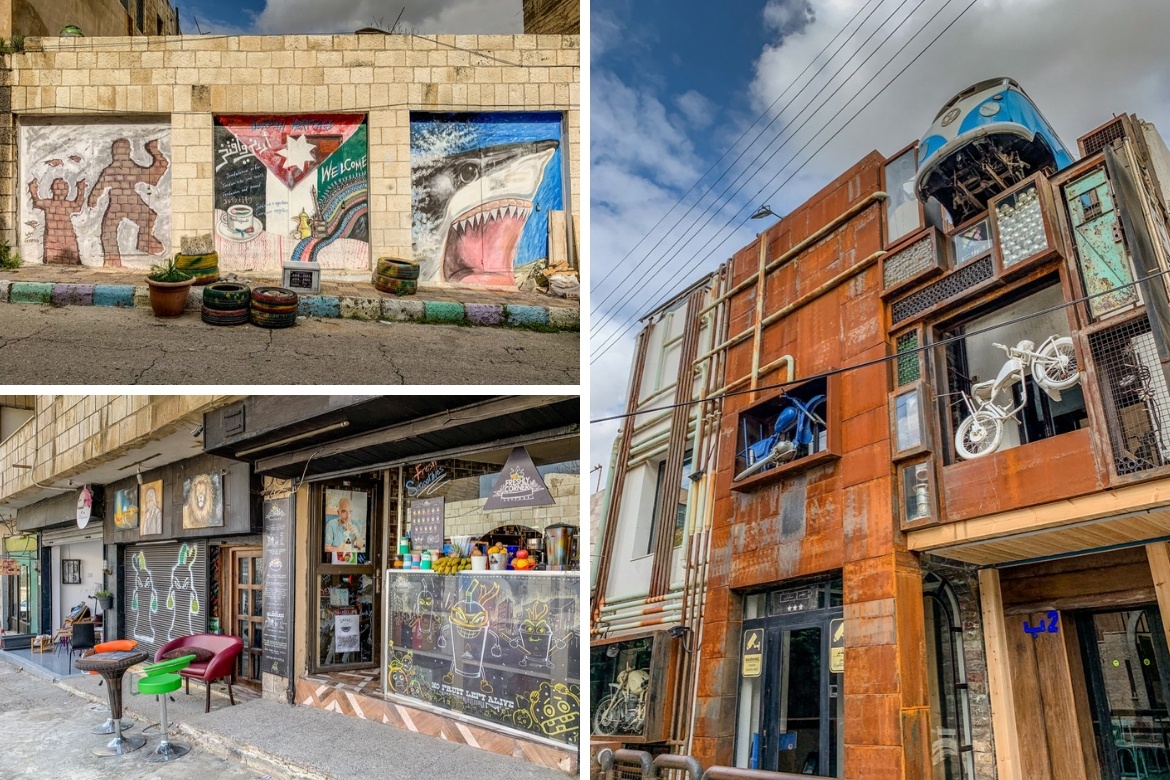 Anyway, if it’s cool boutiques and eye-candy you’re after, skip Rainbow Street and instead head to….

…The Boulevard. Located in the Abdali district which is known as the ‘new downtown of Amman,’ this modern spot is totally trendy (if the fact that it has a huge Starbucks is any indication) and was inaugurated in 2014 by King Abdullah II and Queen Rania. The sleek, pedestrian-only strip has premium shopping, cafes and restaurants, rooftop lounges, and is flanked by highrises including luxury apartments, the five-star Amman Rotana and the glittering W Hotel. 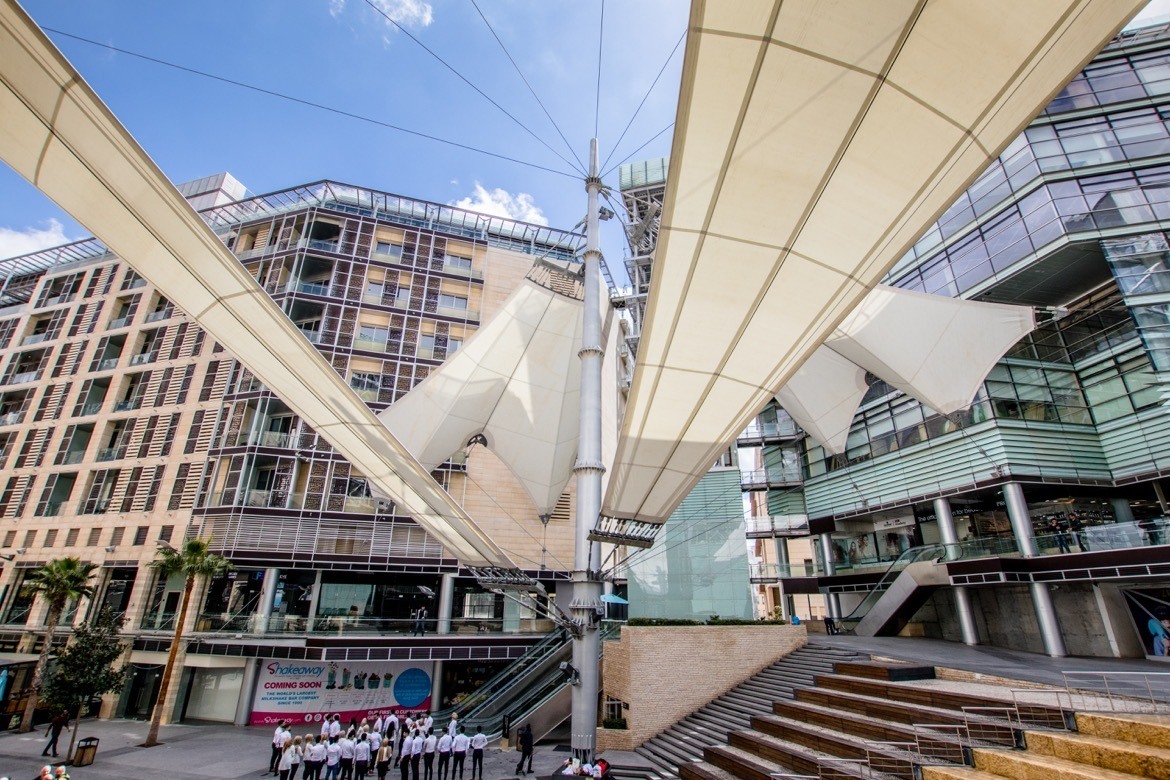 Even if you don’t plan on whipping out your credit card to load up luxury goods, the peaceful ambiance along The Boulevard makes it well worth a stop on an Amman itinerary. Grab a coffee, then meander down the gleaming avenue to marvel at the design-centric architecture and frequently changing art installations. 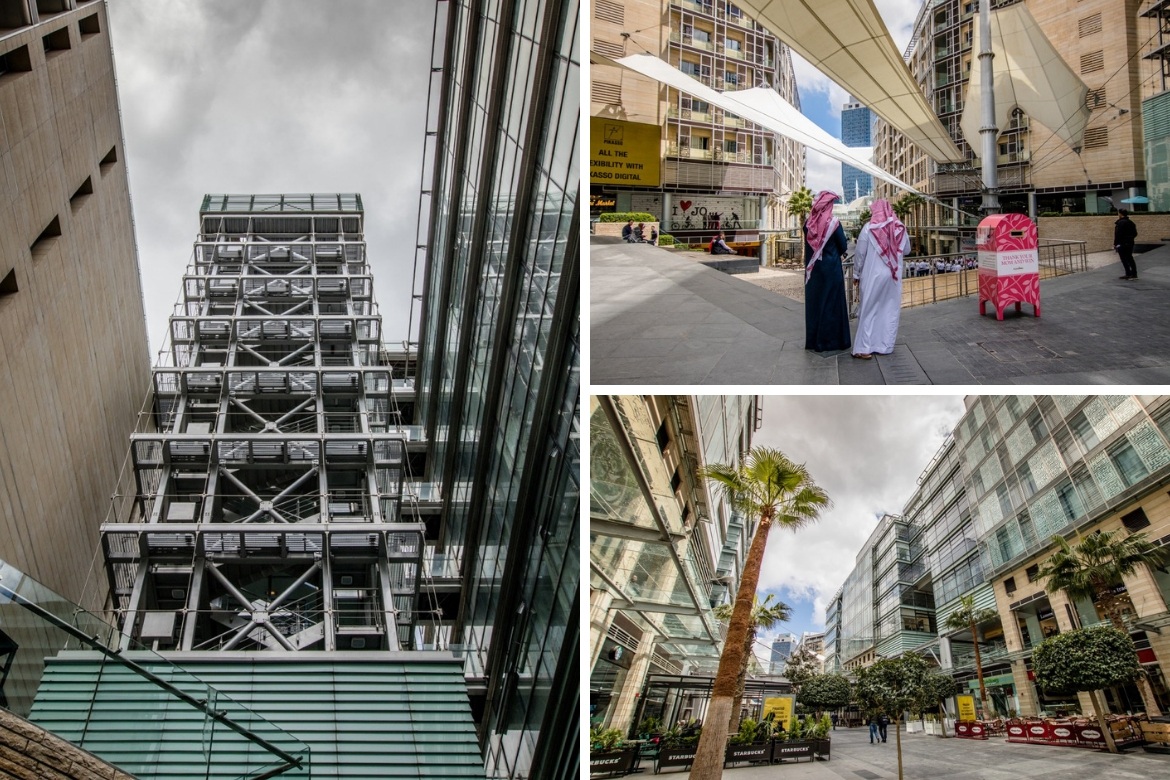 More things to see in Amman

Have more time to spend in the city? Other top things to do in Amman include the Royal Automobile Museum which provides insight into the history of the Kingdom through a collection of cars owned by Jordanian kings dating back to the reign of King Abdullah I, and strolling through Souk Jara which is an open air handicrafts market open on Fridays during summer.

It’s also easy to do a day trip to the ruins of Jerash, as the drive only takes one hour and there are frequent public buses that depart from Amman’s North Terminal bus station. 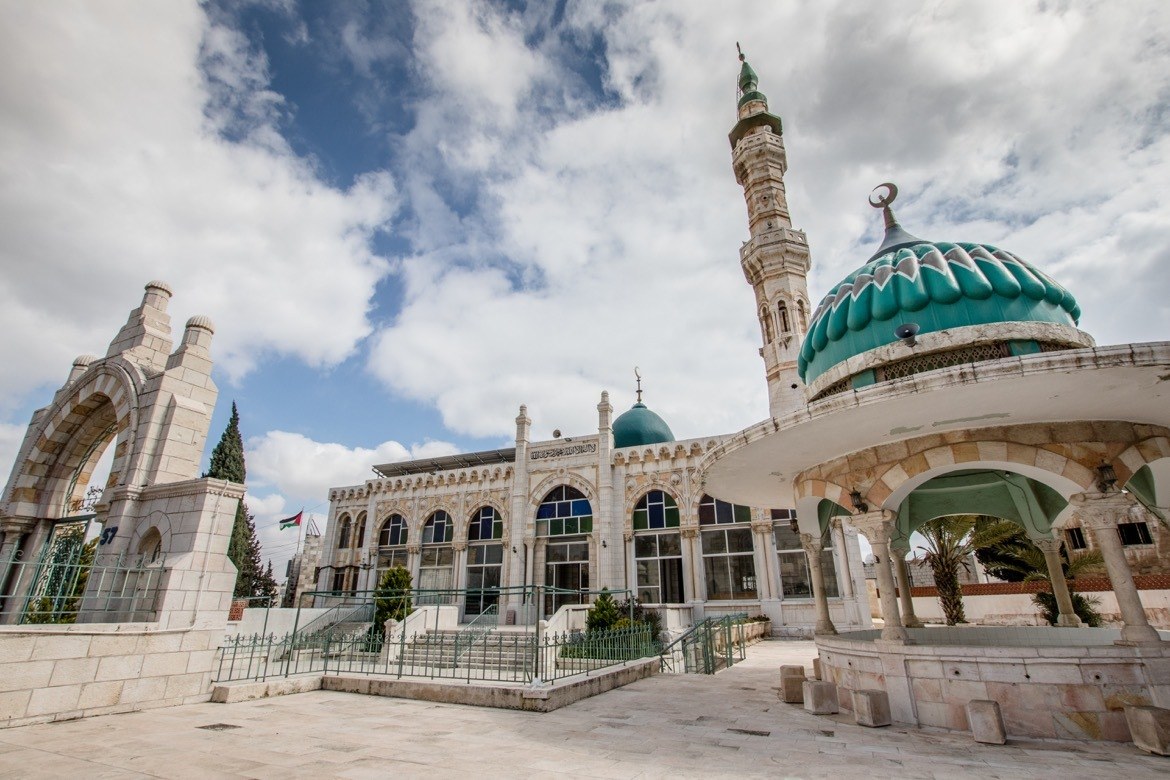 A mosque in Amman

Where to stay in Amman 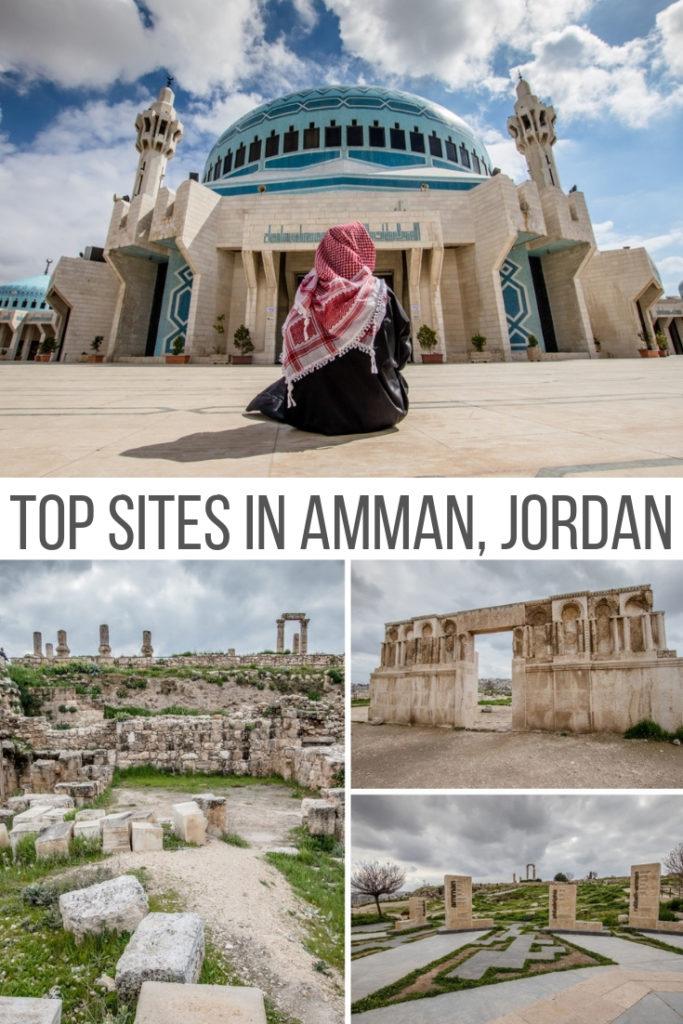 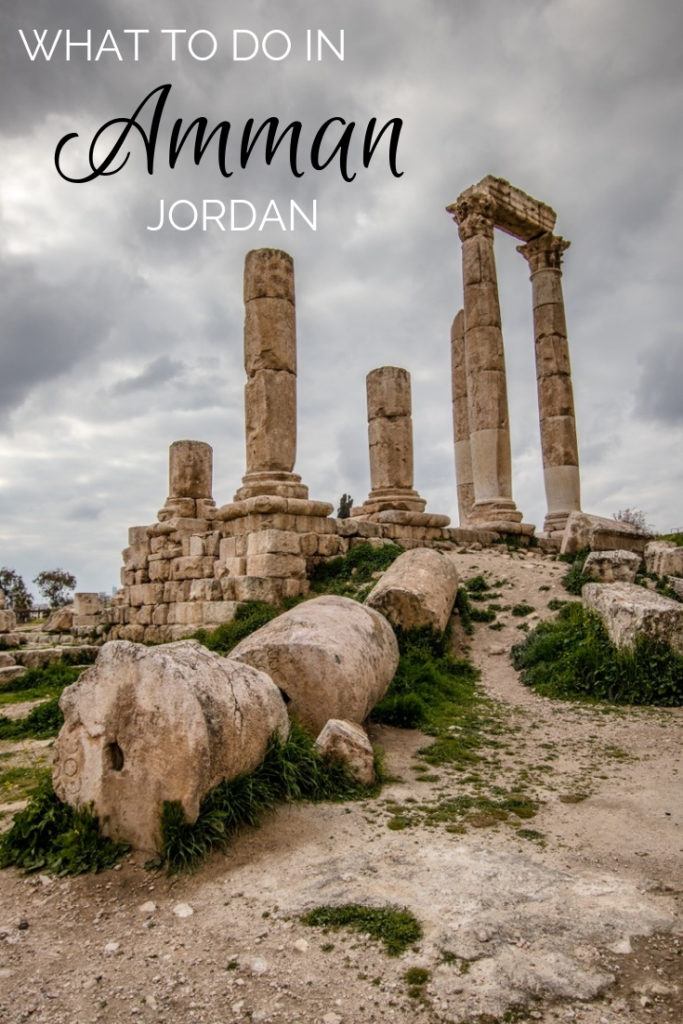 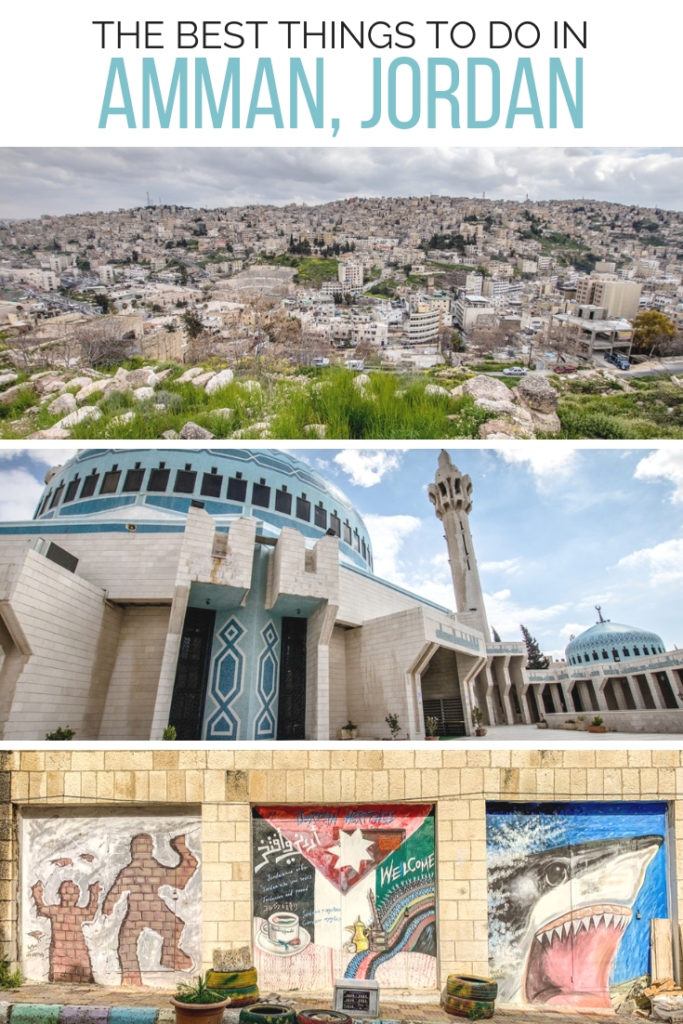